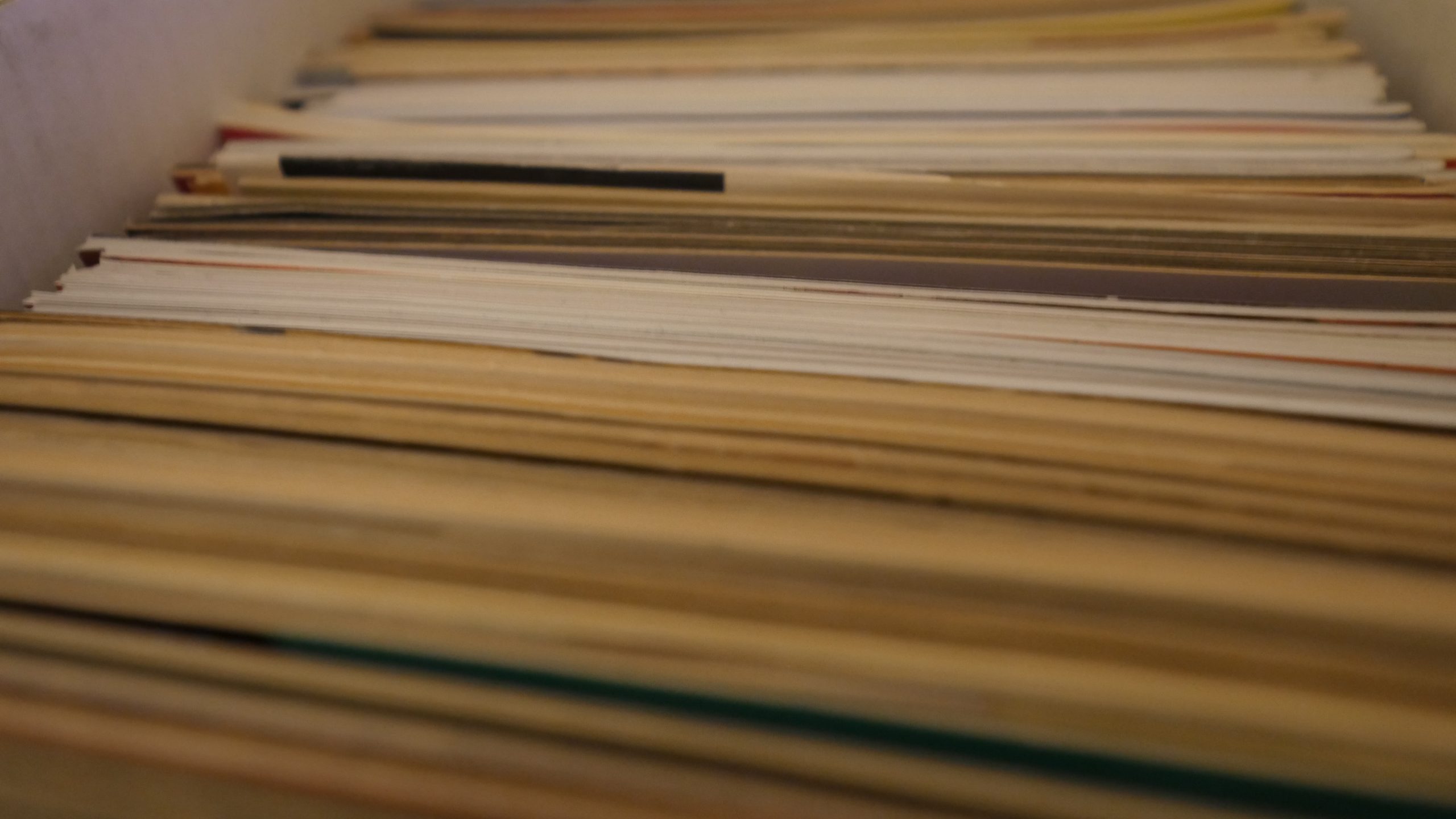 Perhaps I should just leave it at that, but I feel like bloviating a bit. (“NO!  REALLY?”) But at the end of this post, there’ll be an index. Feel free to skip to it if you’re the index reading kind of person.

(The following should probably be read in the voice of Comic Book Guy.)

Last winter, I decided I had to re-read all of Love and Rockets, because… it’s Love and Rockets. And I had finally (sort of) gotten the comics sorted after being stashed in various places for decades, so it seemed like the time.

But then while doing all this arduous sorting, I was happening onto other comics that were singing a sirens’ song. Like… Dalgoda… Journey… Prime Cuts! I MUST RE-READ ALL THESE COMICS!

And, besides, it sounded like a fun project to chase down the comics I hadn’t bought at the time. (This part turned out to take more time than I had imagined: Of the comics I read for this project, I would guess that about one tenth were newly acquired. Thank you, Mile High Comics, Ebay and (*phooey*) Amazon.)

My original idea was to re-read everything Fantagraphics had published. Then I took a look at the comics.org listing for Fantagraphics, and then I thought… “well, OK, just the comic books. The floppies. The pamphlets”. And then I though “OK, dump Eros Comix, too. And Monster. And Hard-Boiled. And Ignatz?”

I used comics.org to source the list of Fantagraphics comics, and scribbled something to filter out the imprints. I think the final list should be pretty complete, but it’s probably not. And I’m not going back to fill in anything I missed.

So for this most nerdy of nerdy projects, I ended up with a list of *gulp* 231 comic series. 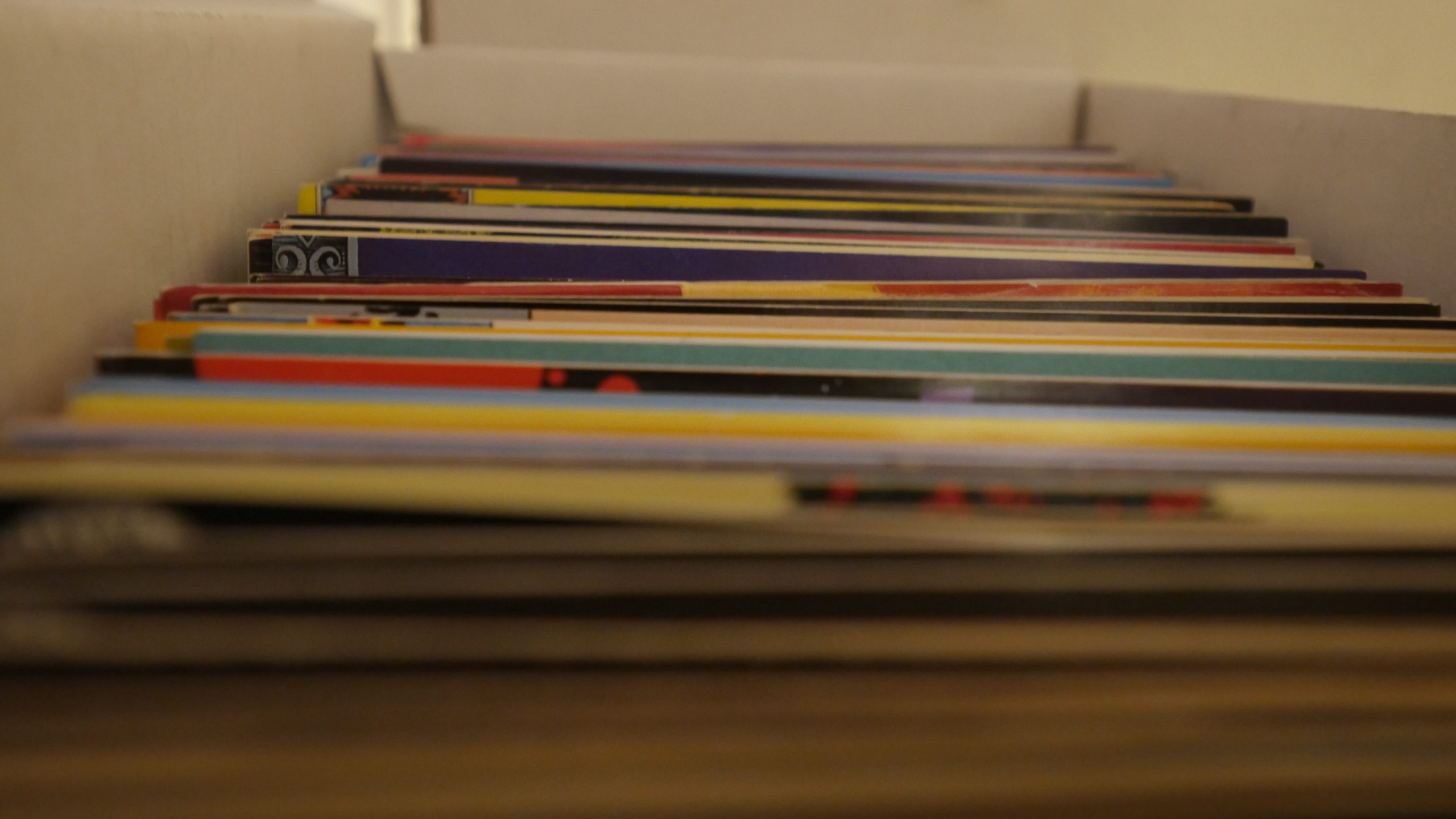 I almost stopped then and there, but now I had invested all this time (several minutes at least) into the project, so it was obviously too late to abandon it.

And it’s been fun, mostly. I did re-read Love and Rockets, and it was amazing, and I did discover new old comics that were really good, like Art d’Ecco. But there was a lot of stuff that I had forgotten about, or never had known about, that didn’t exactly set my couch on fire. Where my time would probably have been spent more productively doing something else than reading these comics.

OK, let’s establish a baseline here. Eddie Campbell makes the point (I think) that it’s unfair to compare comics to literature because most comics suck. (Is that a fair summary?) Instead we should be content to enjoy sucky comics because it’s fun to read comics.

So instead of determining whether it’s worth spending time on these comics by, say, imagining that I’m re-reading Between the Acts by Virginia Woolf instead, let’s benchmark to a slightly humbler work. Something that’s unassuming, not generally thought of as a masterwork, but is still something that apparently sane people spend time with and get some enjoyment out of.

The question then becomes: Would I (and therefore everybody else since my taste level is impeccable) rather be reading this Fantagraphics comic than Unbeatable Squirrel Girl?

I think Fantagraphics starts off pretty well, roundly winning on the USG scale with comics like Love & Rockets, Neat Stuff, Usagi Yojimbo, Captain Jack, Sinner, and on and on and on. But when you get to the 90s, things get rather dicey.

Looking over the Fantagraphics 90s lineup, I’d say that more than a quarter of the comics fail the USG test. On an issue-by-issue basis, the ratio looks much better, because most of the worst series were cancelled pretty quickly, and the best series (Eightball, Hate, Naughty Bits, The ACME Novelty Library) went on for quite a while.

But if you stumble on to a 90s Fantagraphics series you haven’t heard of before, it’s likely to not be USG worthy. There isn’t a lost treasure trove of Fantagraphics gems. There are publishers that have almost perfect track records (Vortex, Tragedy Strikes, Black Eye, Uncivilized and the ever-lovable Drawn & Quarterly (at least I think so, perhaps I should re-read all their comics? (NOOO!)))), but Fantagraphics isn’t one of these publishers. And I had forgotten.

The past couple of days, I’ve also read We Told You So, the Fantagraphics hagiography, I mean oral history. I learned a lot about crazy interns, but very little about the comics they published or why they published them. I didn’t really expect to find any explanation for WTF-ey items like Butt Biscuit, but there was very little discussion about their publishing, er, strategy in the 90s at all.

The closest I got was a sentence by Kim Thompson saying that he would agree to publish things in the hope that the next thing they made would be better, and that that usually didn’t work out. So it’s more of a “throw shit at the wall and see what sticks” kinda strategy. (That they had no money probably didn’t help much.)

Perhaps the strategy didn’t work very well in the 90s because the most talented artists went with other publishers? Reading interviews (and That Book), there seemed to be a general feeling that Fantagraphics didn’t do publicity for any of their creators other than their top five artists. And their publici 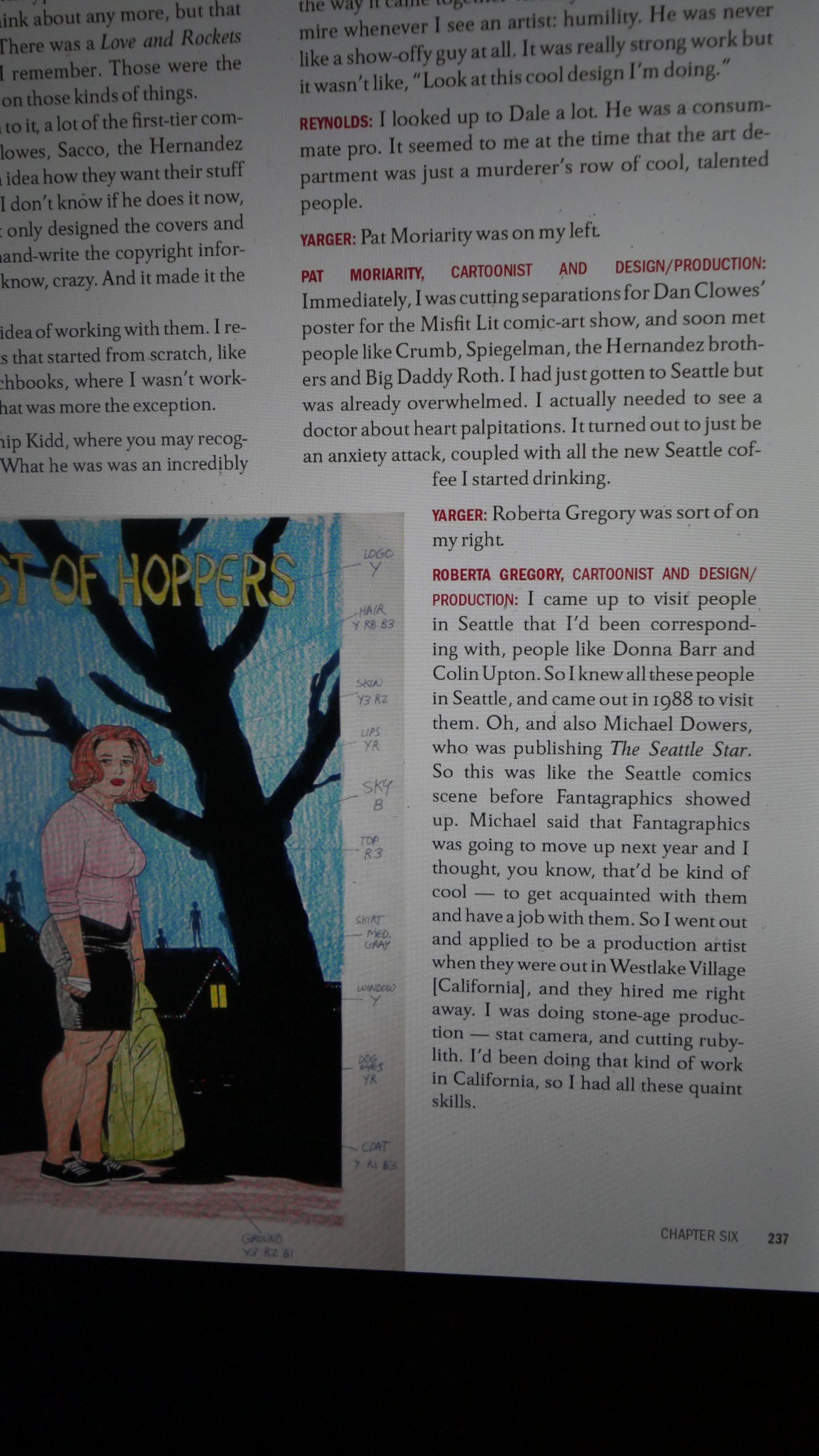 st seems to confirm that rather bluntly in The Book.

(And to digress a bit: We Told You So is a frustrating reading experience. The cut-up “oral history” style sometimes devolves into an American TV documentary style with a sentence from one person, then a paragraph from another, then back to a sentence from the first person. If you want to be really mean about it, reading it is like watching a forty-six hour segment from 60 Minutes, with the narrator’s voice edited out. What is the audience for this book?)

And perhaps the explanation for the less stellar comics is simpler than all of this: Many of the books were created by coworkers and pals from Seattle, and they thought “hey, why not”.

But the 90s aren’t all dire. There are things that pass the USG test with flying colours, like Carol Swain, Renée French, Al Columbia and Dave Cooper. And as the 90s waned, so did the shit deluge. (OK, now I’m overstating the case: There’s little that’s actually crap. Deluge of mediocrity? That doesn’t have the same zing to it.) In the next decade Fantagraphics got their, er, shit together, and these days most of what they publish is, again, pretty spiffy.

I don’t mean to sound so down. Fantagraphics is a very important comics company, and comics history would have looked very different without it.

But in conclusion: If you ever feel like replicating this reading project… don’t. Just read the good comics they’ve published instead, and you know which ones they are.

And then you can decide whether to read Unbeatable Squirrel Girl afterwards or not. 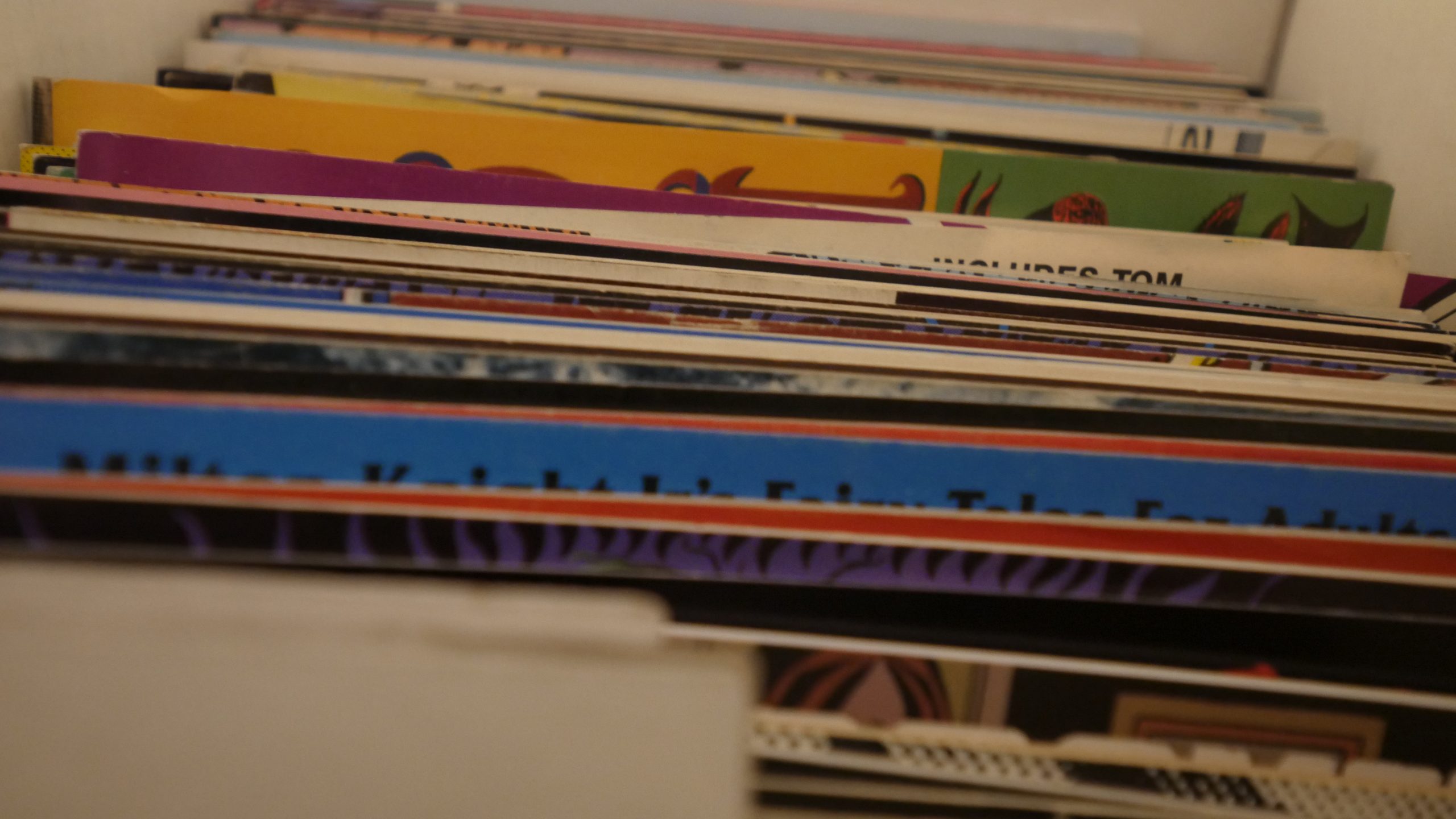 The ones marked with ★ pass the USG test, I think.