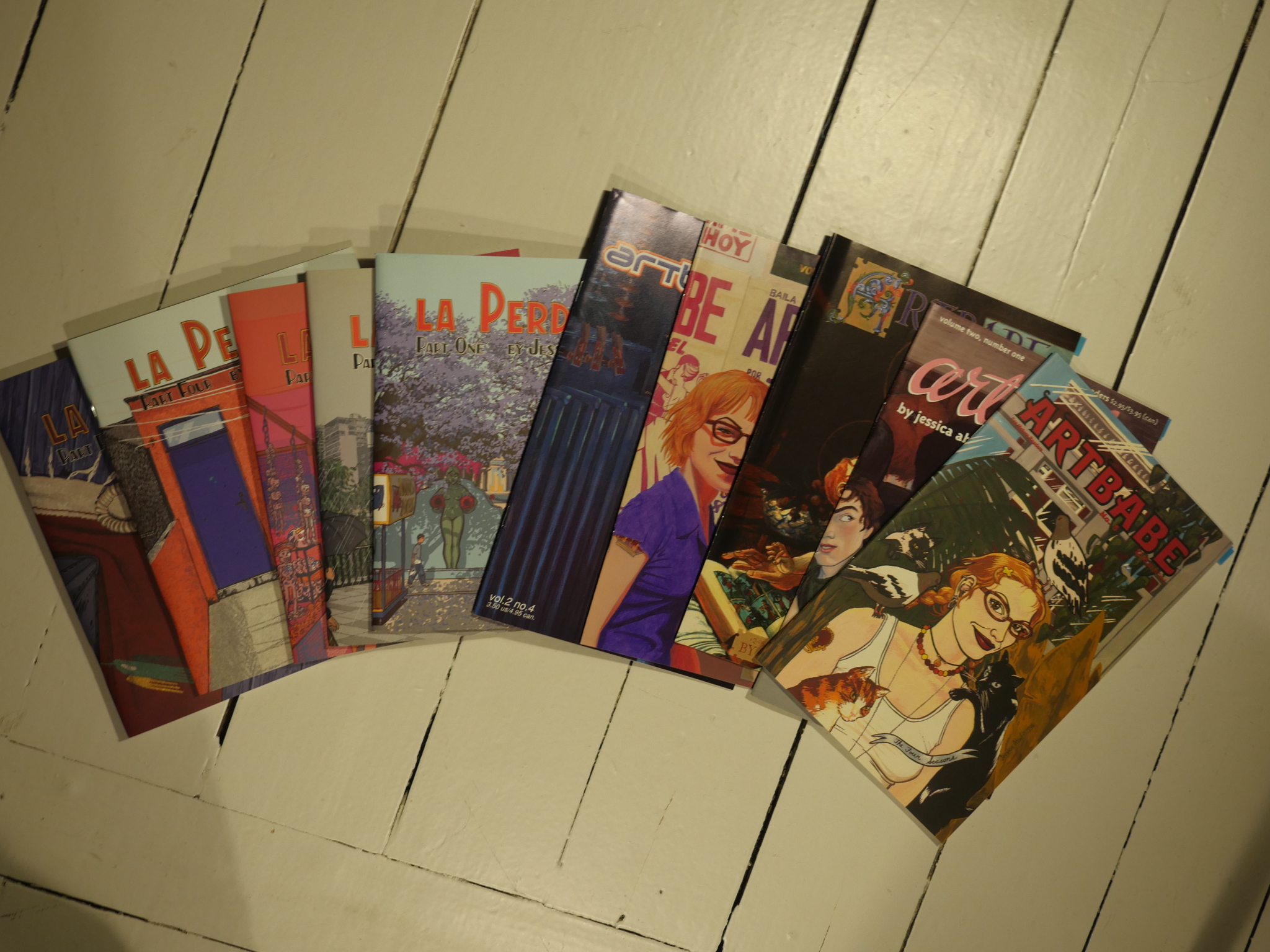 Artbabe started out as a self-published mini-comic, and then Abel got a Xeric grant and published the final issue of Volume 1 as a standard-size US comic book (with real distribution). 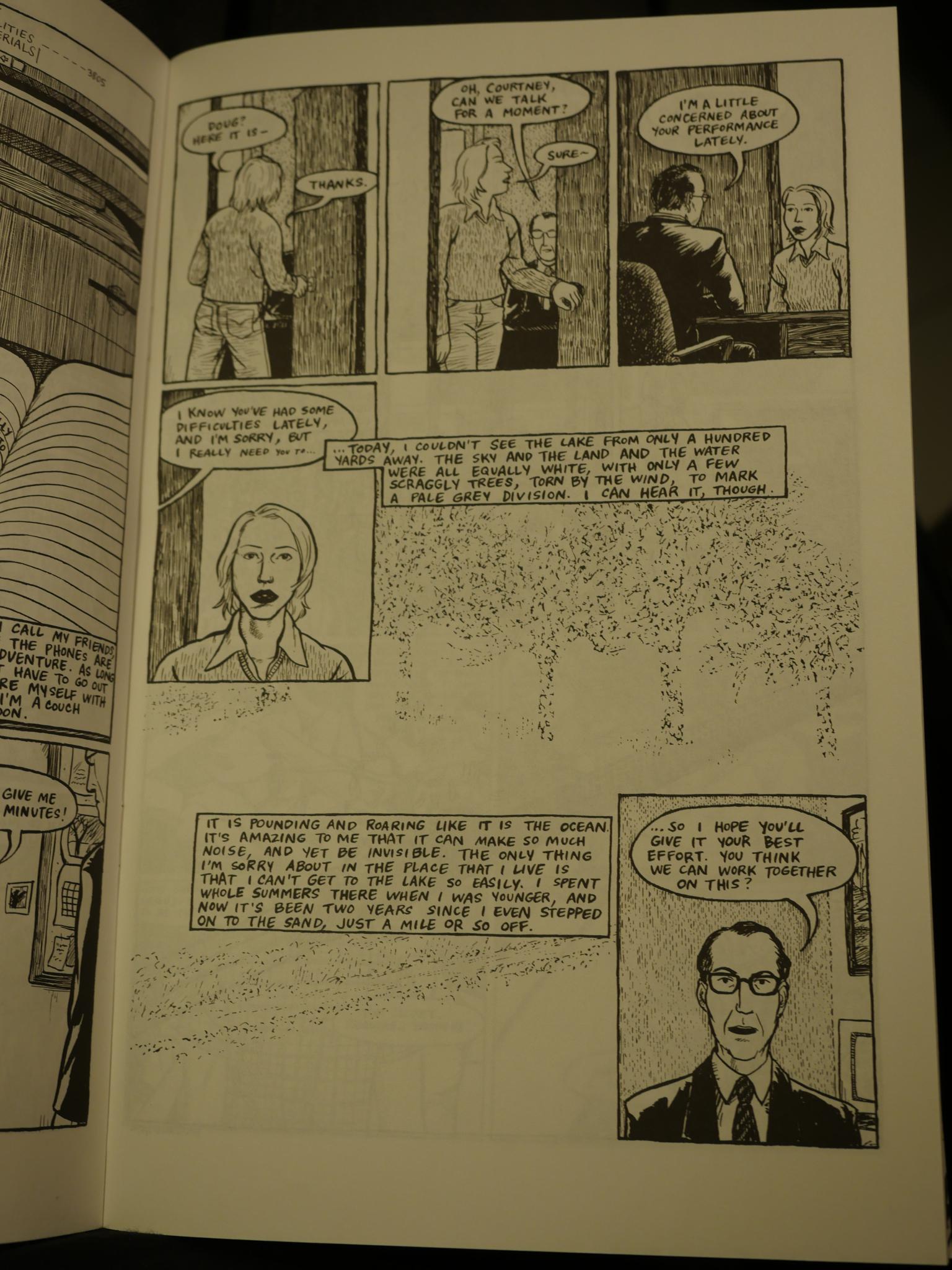 I haven’t got the first four issues (although I may have the collection here somewhere), but the fifth issue, at least, is very nice indeed. It’s about people in their early twenties who are working various jobs while thinking about being artists and writers. I loved the internal monologue on this story in particular, and how she zones out a lot while The Man is talking to her. 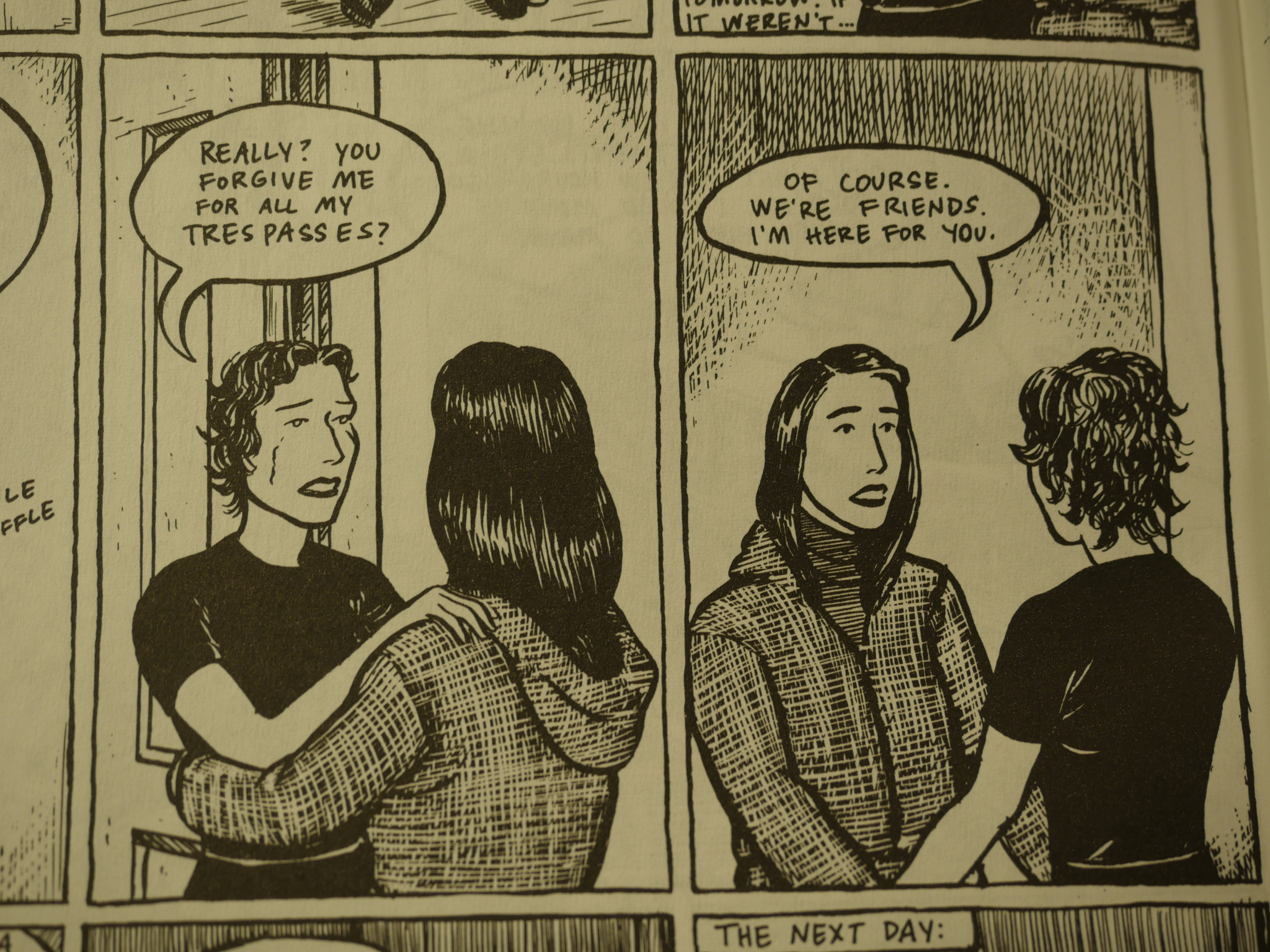 There’s a lot to like about the artwork, too, although her faces sometimes grow odd proportions. But they seem like real people, although they all have mysteriously good hairdos. 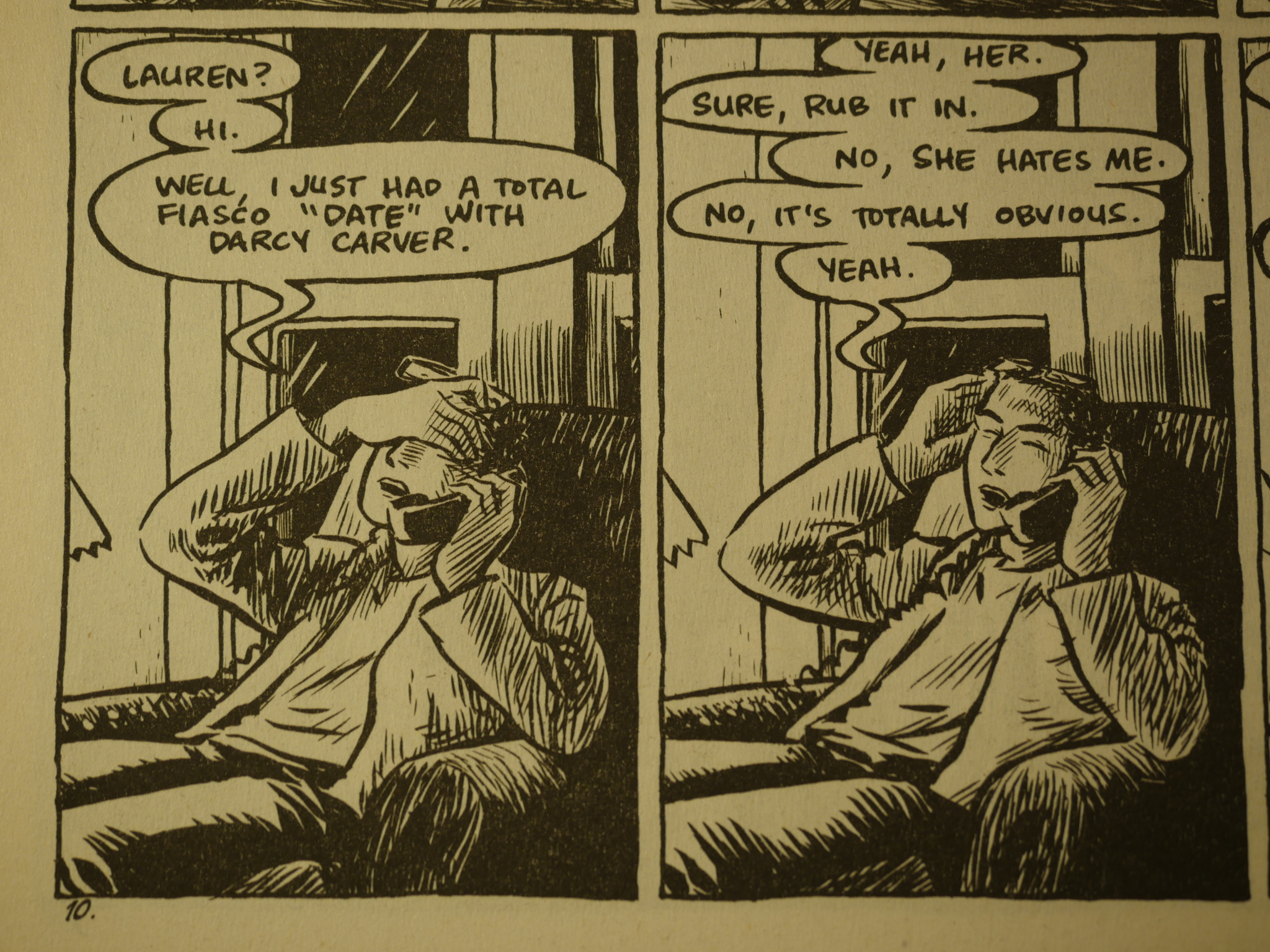 Onto the Fantagraphics issues, which change the format a bit. Instead of short stories, every issue is one longer story. (With the occasional fun backup.) They’re still about the same subject matter, though: Slackers.

I mean, KIDS THESE DAYS. I mean THOSE DAYS. 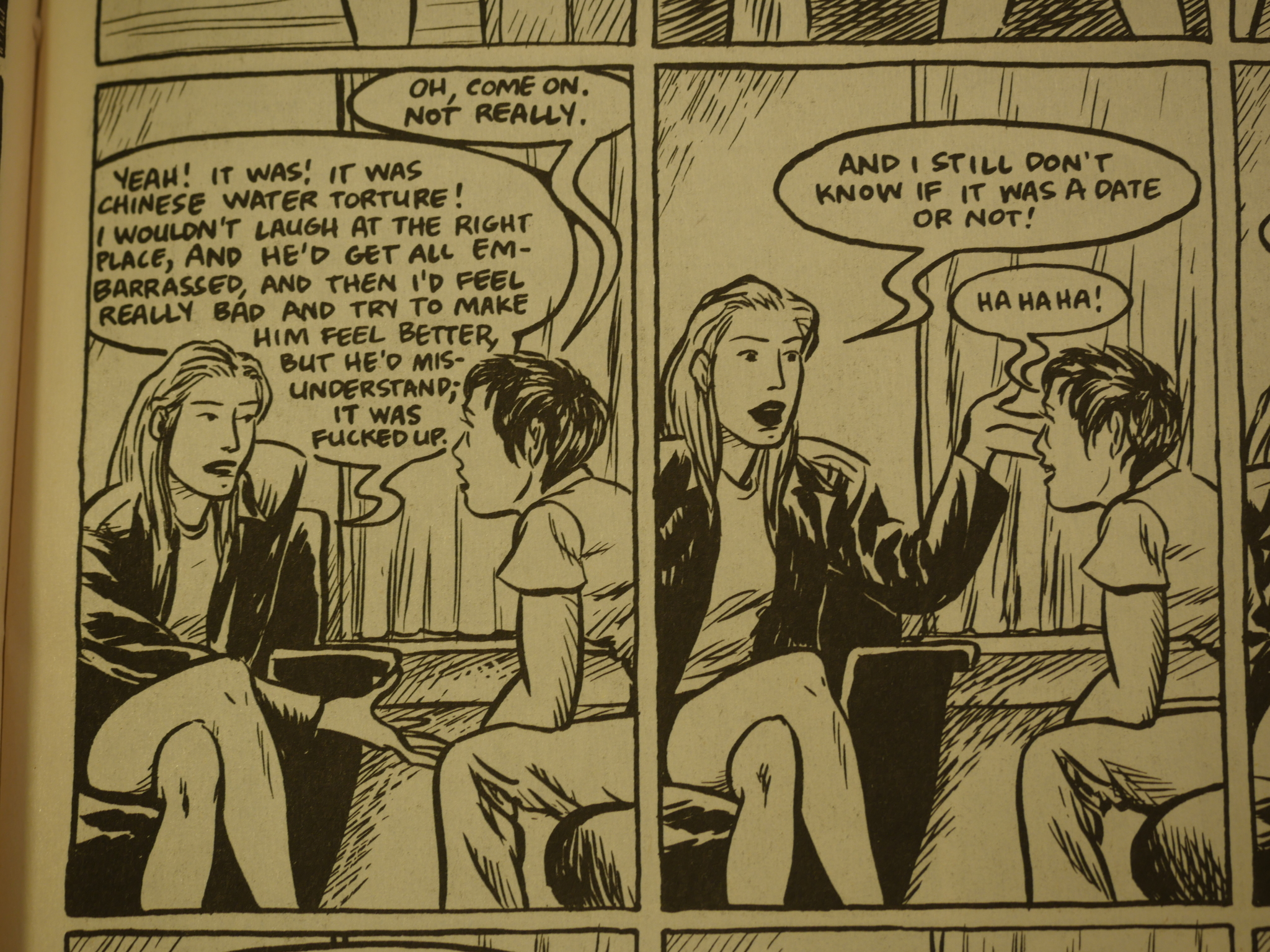 In the first issue, we have the story of a date that goes wrong (sort of), and we get to hear about it from both sides. It’s a fun and rather wistful tale.

Abel’s artwork continued to grow ever more attractive. There’s something about her figure poses and her linework that’s so on fleek. 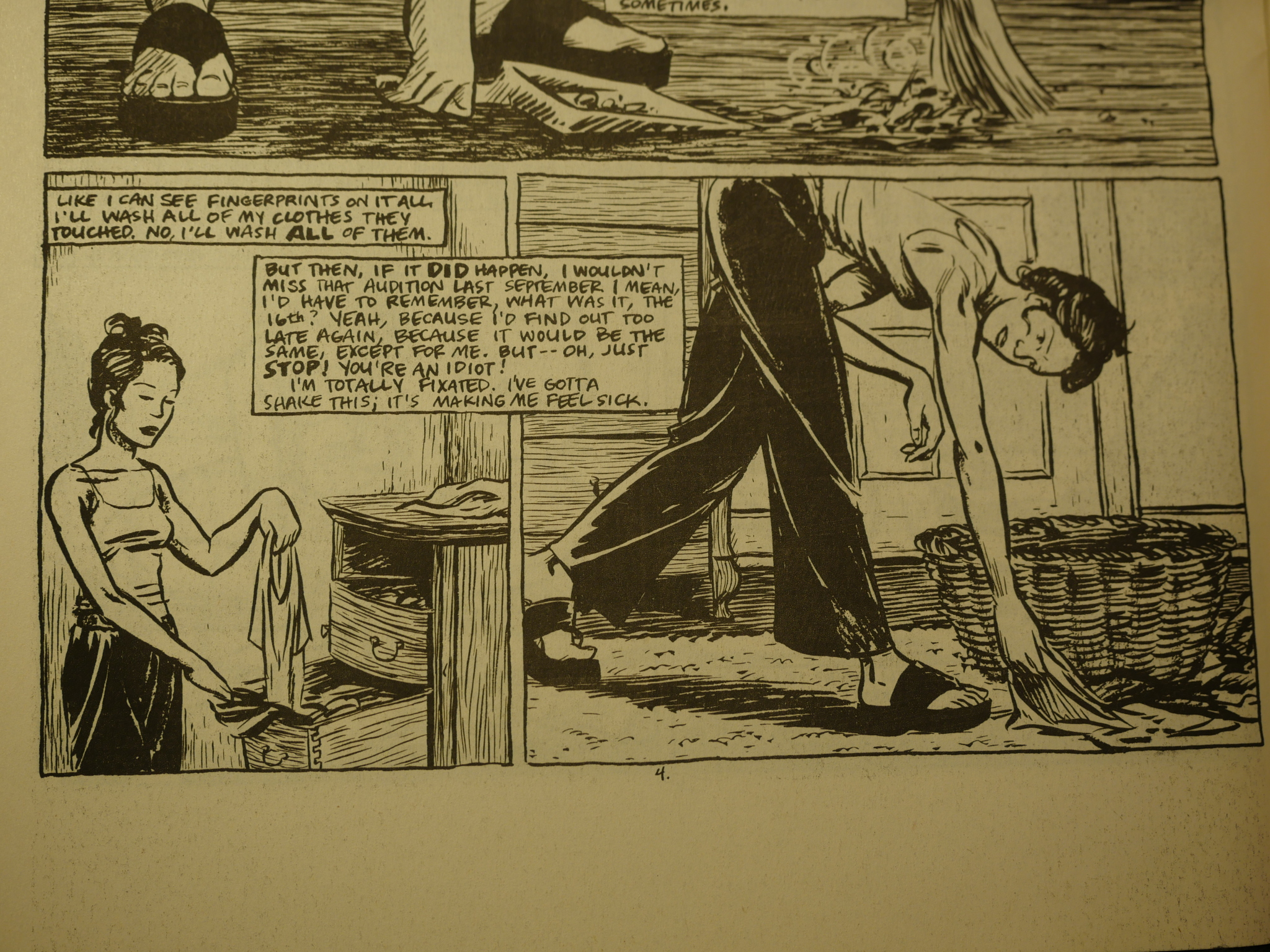 Abel’s internal monologues are really convincing. (If you’re wondering why that looks like a ballet dancer picking up the laundry, it’s because that’s a ballet dancer.) 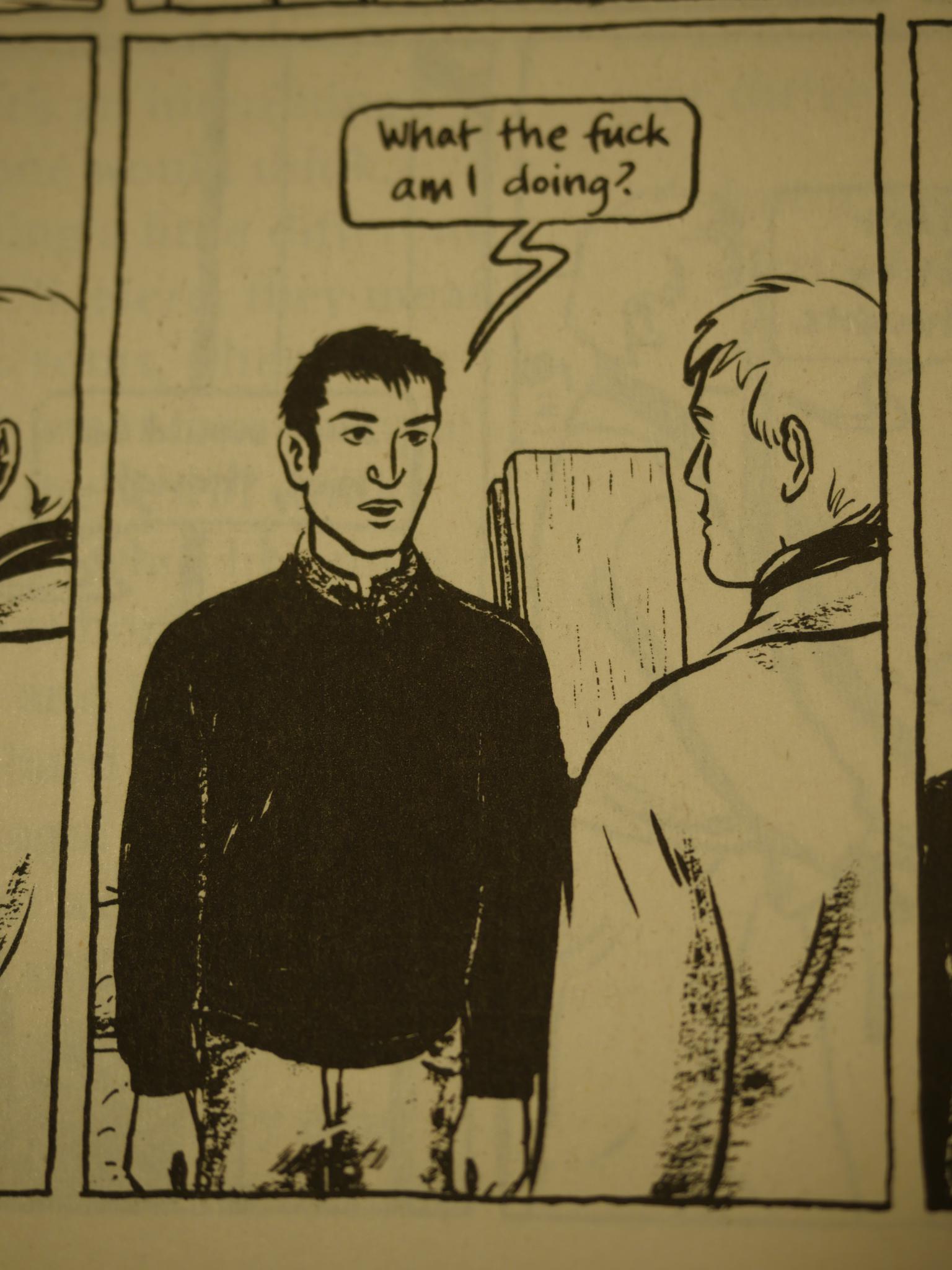 She mentions in the second issue that she’s moving from Chicago to Ciudad de México, and the third issue is all about leaving. But it’s a story about a poseur (possibly) writer moving to New York… 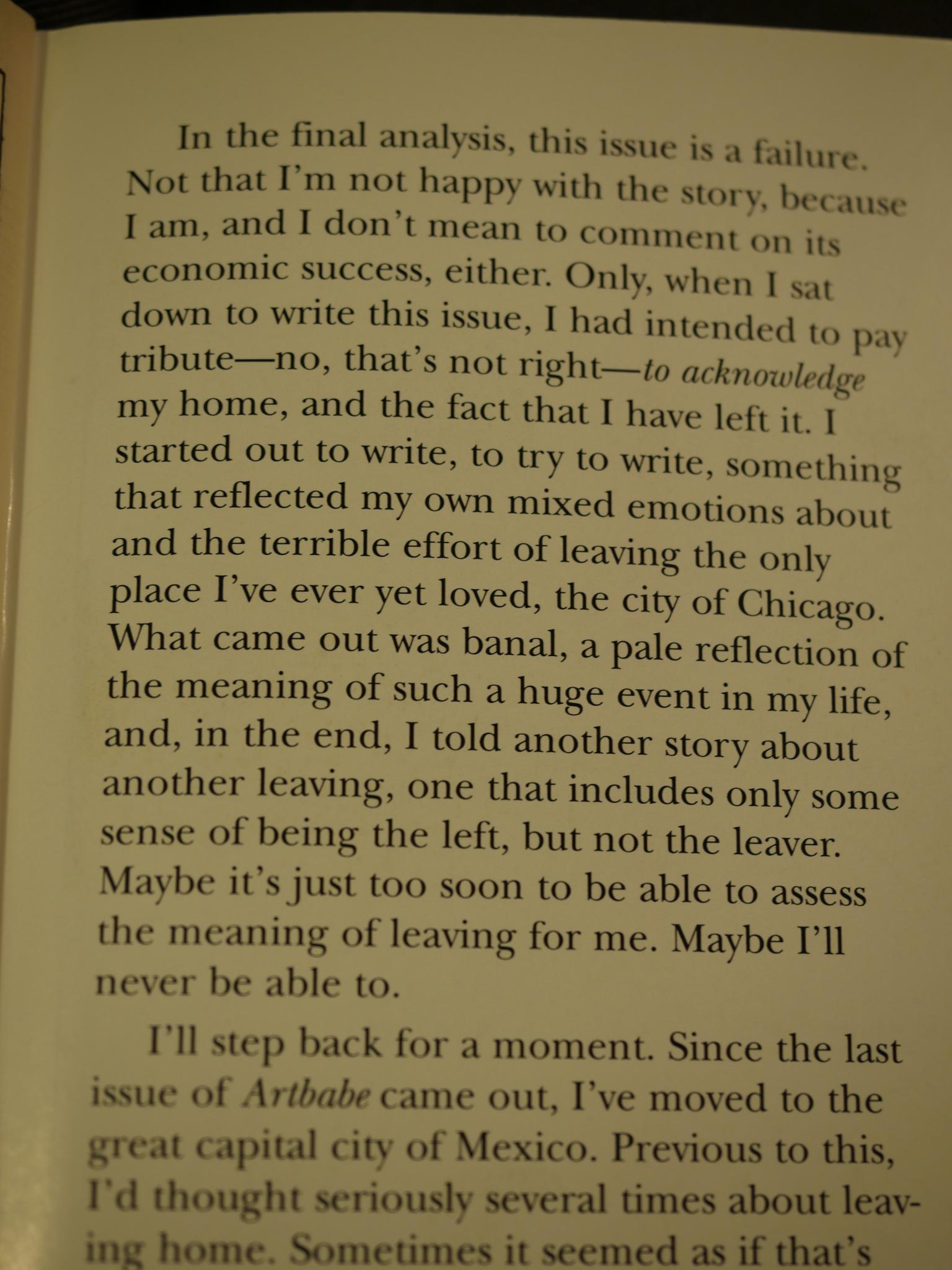 … and Abel explains what it’s all about and even gives a critique of herself. 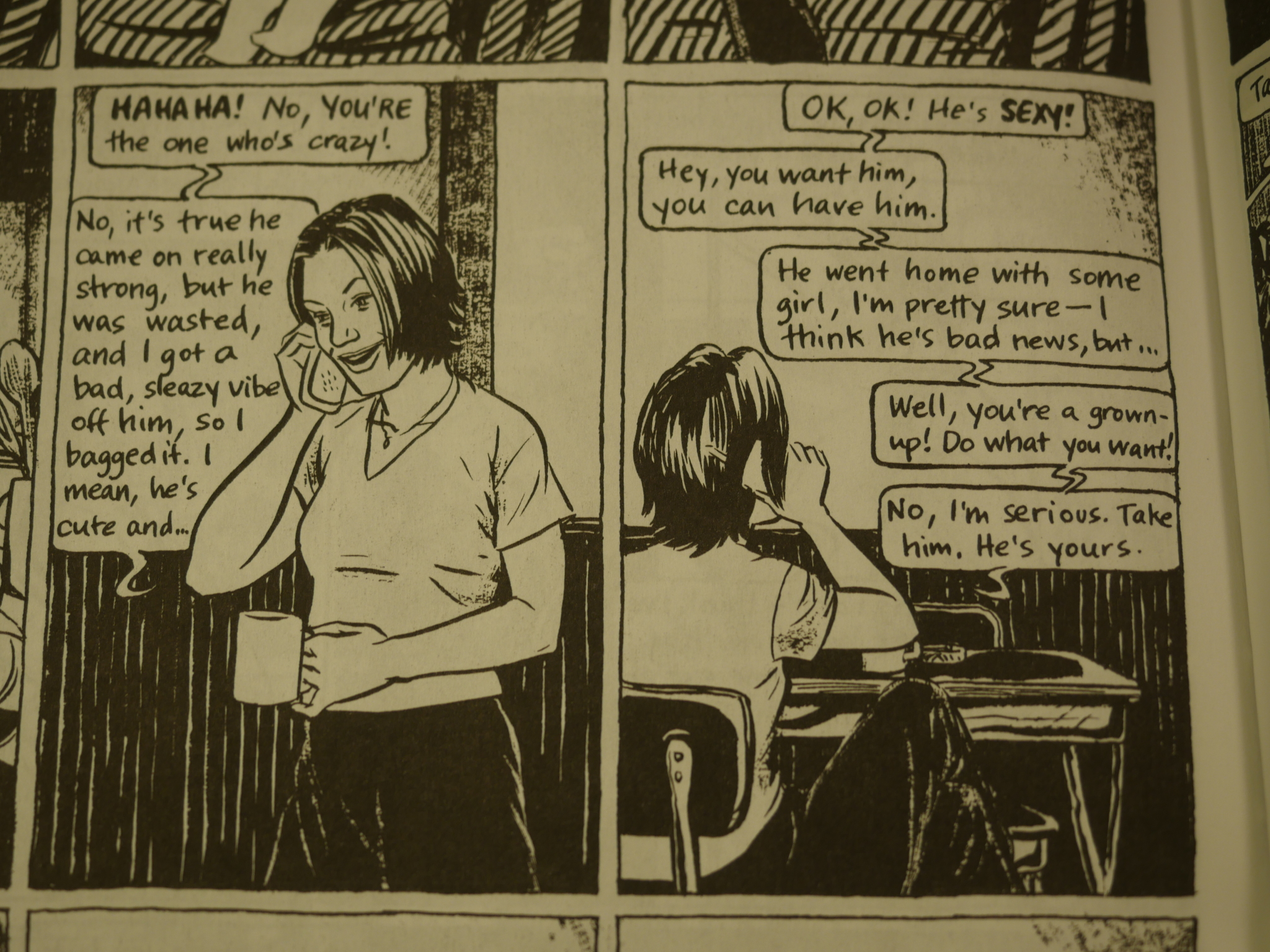 Abel’s specialty is writing long scenes of one-sided phone conversations, which I think is something she nails. 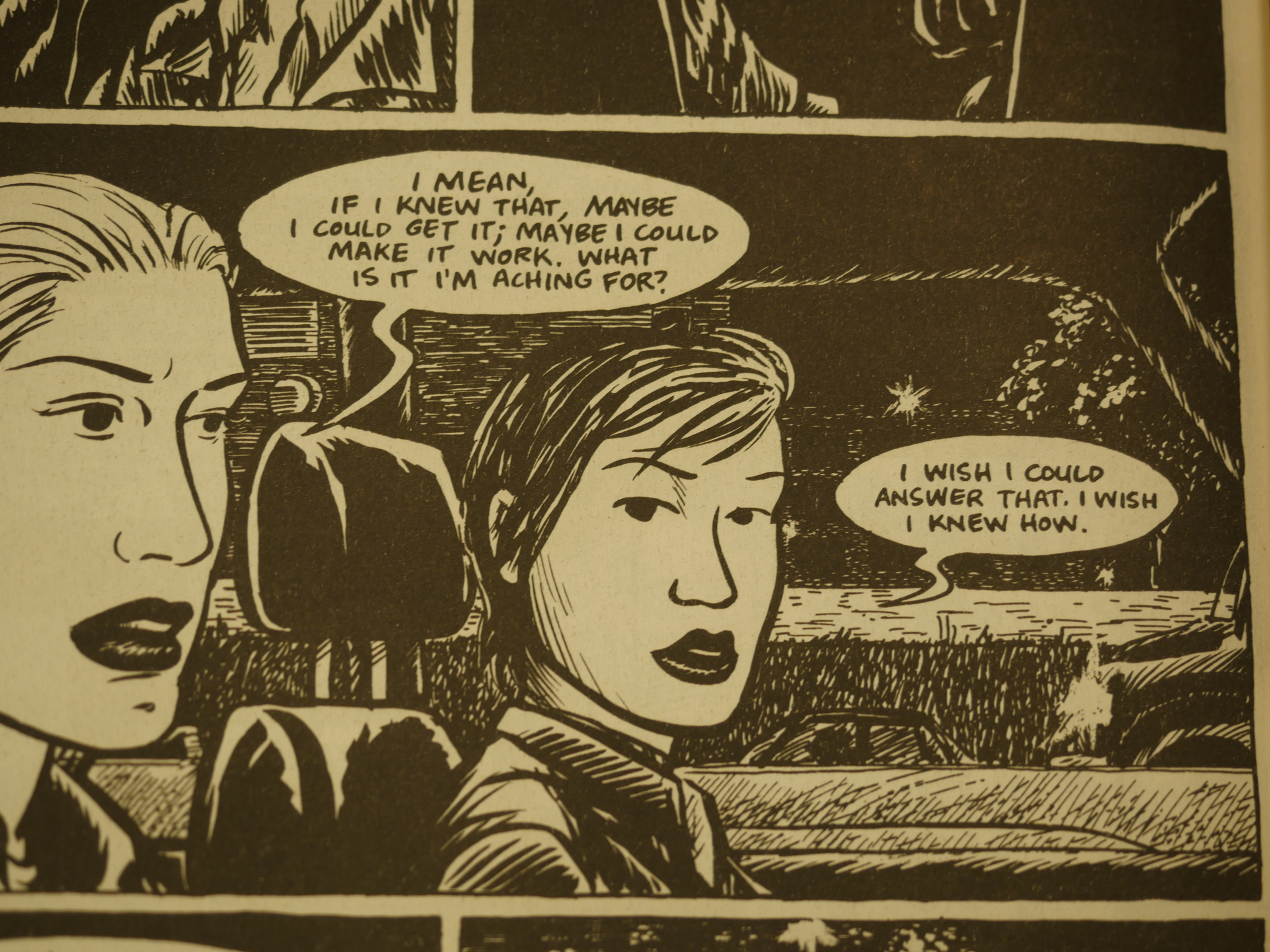 However, her dialogues sometimes sound like something from an indie film and not real life.

After four issues, she announced that Artbabe was cancelled, but that it would return with a volume 3 in a couple of years. That didn’t happen, but instead we got La Perdida. 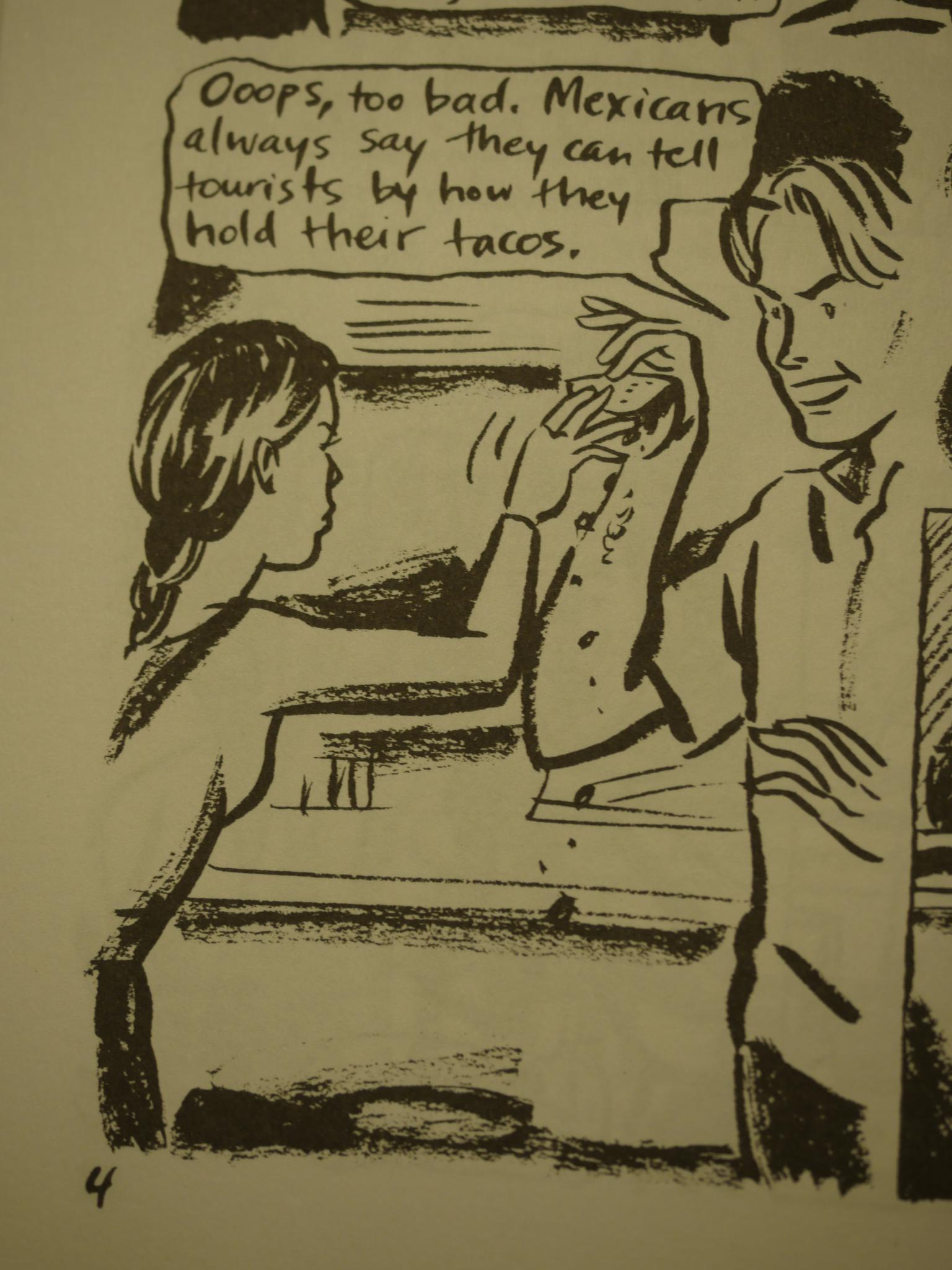 It’s a five issue 48 page slightly-smaller-than-standard size serialisation of one long story about a young woman who moves from Chicago to Ciudad de México. (Hm, that reminds me of something, but what?)

Abel’s artwork has changed quite a bit from the Artbabe styel. It’s looser, with broader strokes and fewer tiny lines. 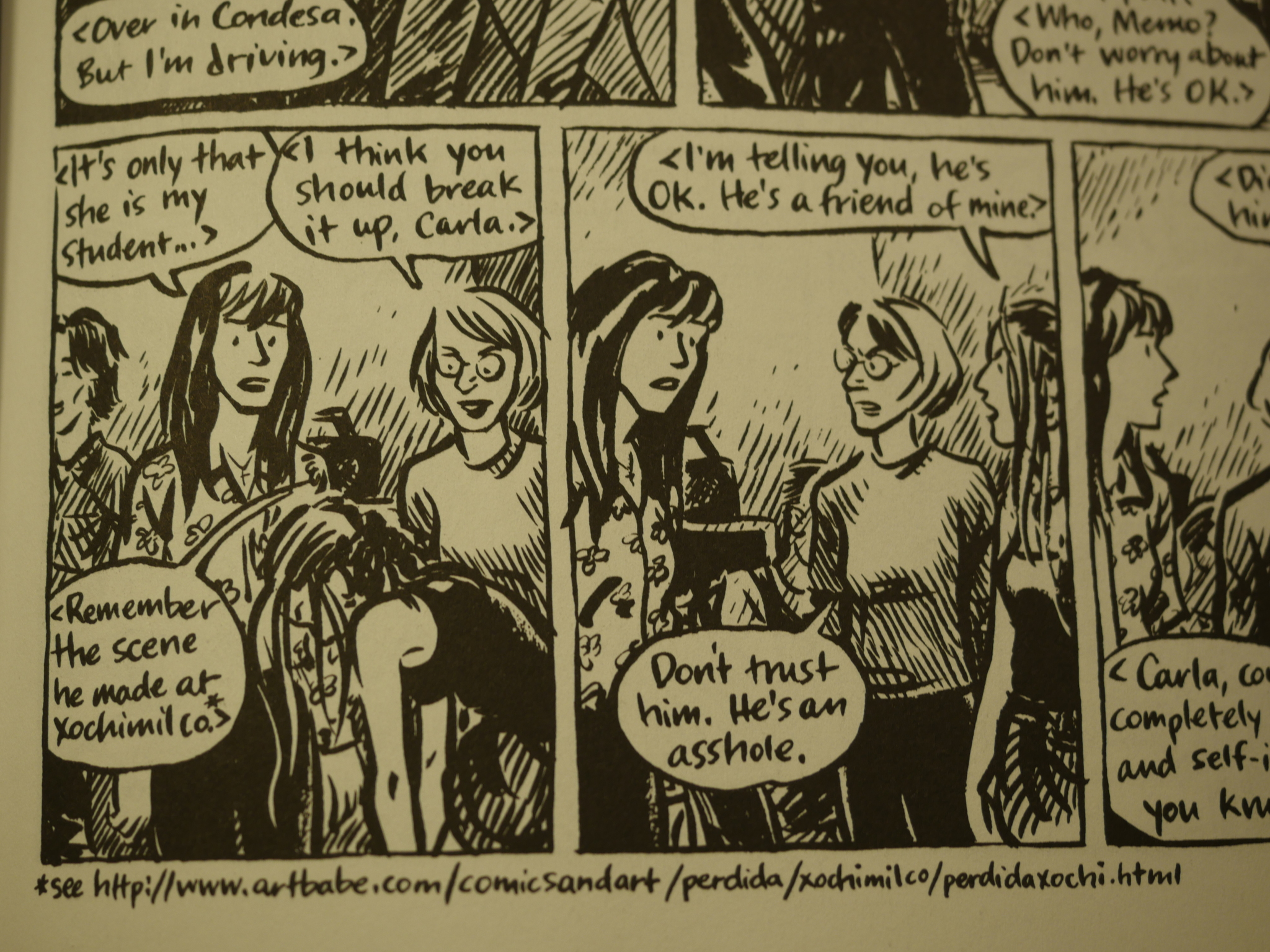 Hm. Does that URL still work? No. And due to a printer’s error, the first page is repeated on page 25, so I may have missed two vital clues!

Anyway, the story is about the young woman confronting her (perceived and real) privileges as an American in Mexico. And then getting involved with some hapless but scary criminals. There’s a lot of this sort of stuff, and my main reaction to these scenes is to want to shake her and tell her to start ignoring these flaming assholes and go party instead. Which makes for a somewhat frustrating reading experience, and may not be what Abel was after.

Love the art, though.

It was released as a hardback by Pantheon Books shortly after completion.

Abel has mostly been involved with education the last few years.