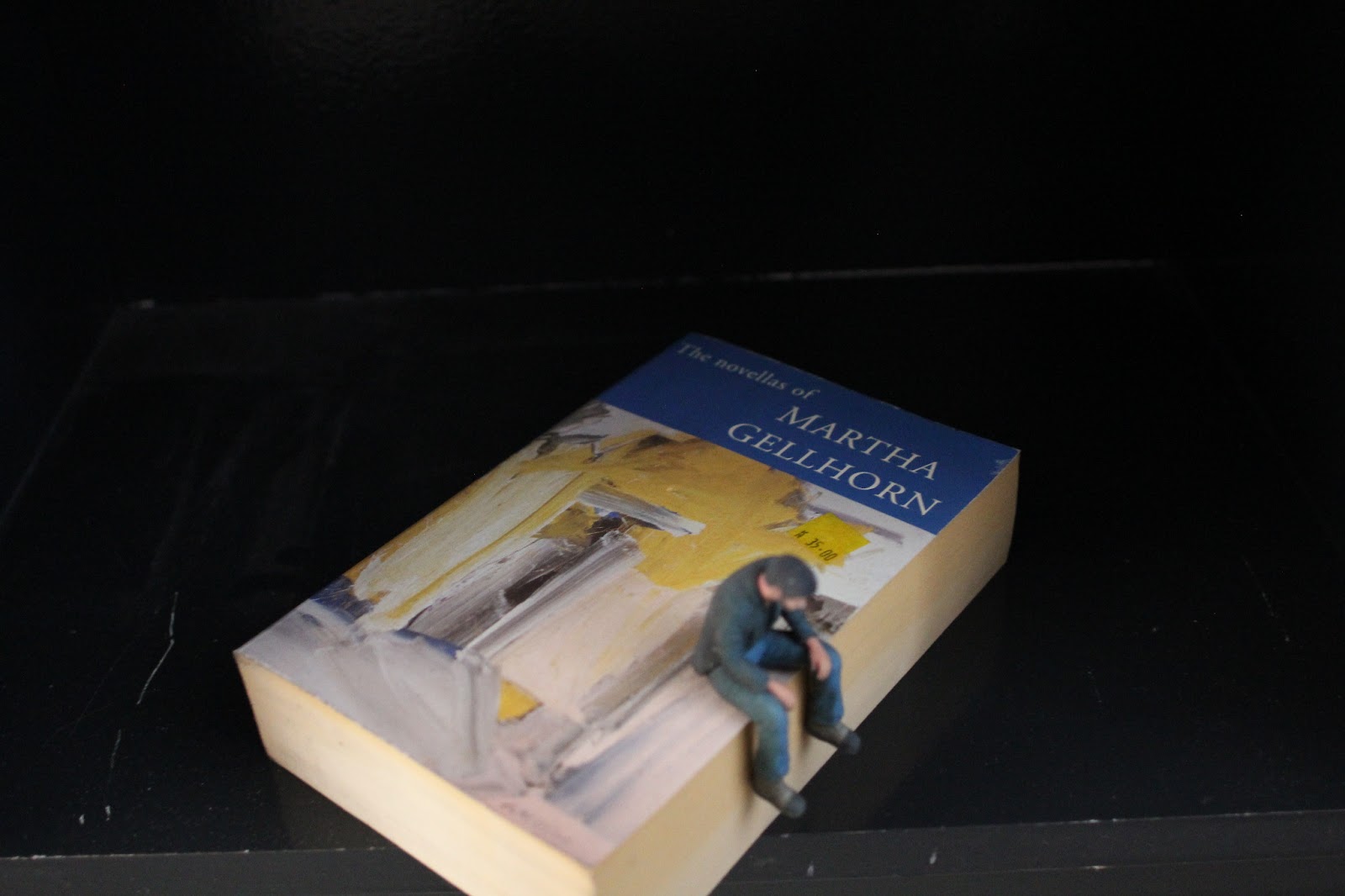 1995 is over, and this is perhaps the essence of books-that-I-didn’t-read:  It’s a short story collection; it’s an omnibus; it’s really long; I bought it on sale; it’s by an author I had grown disenchanted with.

I first read Martha Gellhorn’s The Face of War, and was completely blown away.  Then I bought The View from the Ground, and I … wasn’t.

So when I happened upon this book in 1995, I bought it, but probably didn’t intend to read it.

It’s an omnibus of four collections published between 1936 and 1978.  I hate omnibus collections.  Books are usually the length they are because that’s the right length.

You pick up a book, read it, and then choose a different book to read.  When you collect separate books into collections, it just feels wrong.  I go out of my way to avoid these, and buy the separate editions instead.

The first book collected here, The Trouble I’ve Seen, was published in 1936.  I think I remember (from her essay collections) that she was a reporter working somehow for the White House (or something) collecting reports on the poor.  This book has four stories about very poor people indeed, so I’d say it’s likely that there’s some sort of connection.  Based on true people?  I don’t know, but the stories are shattering.

Every one of these tales are bursting with emotion.  Reading these, I found myself thinking sometimes “Is she beeing too maudlin here?  Is this too gauce?”, but I don’t really care.  I love the insight into these people’s lives, and I love the passion Gellhorn writes about them with.

The second book, Two By Two (1958) is quite different.  Each story is about a couple in love, and most of them take place during or after WWII.  We have (Italian) princes and princesses, British gummint aspirants, and war correspondents.  While interesting and well written (perhaps “better written” than the first book), the passion seems to be gone.

I have no idea whether anything much in this book is based on real life, but the last story has a character who used to be passionate about reforming the world, but then she toured all the German concentration camps during the liberation, and lost faith in humanity.  It’s tempting to read something autobiographical into that (Gellhorn was a war correspondent and she did visit the concentration camps (I think)), but perhaps that’s a too trivial explanation.

By 1965 with Pretty Tales for Tired People, Gellhorn seems to have lost what remained of her enthusiasm.  The three stories brim with ennui.  I find myself wondering why she even bothered writing this book.

The stories have the unfortunate whiff of gossip.  As if she had heard  some deliciously scandalous tales about aquaintances, and felt compelled to make gossip into short stories.  But hearing gossip about people you neither know nor care about is tedious.

The last book in this collection is from 1978: The Weather in Africa.  Here the gossip is explicit — all the stories feature several scenes with people gossiping about the protagonists.  But!  Gellhorn has gotten her enthusiasm back.  Perhaps it’s because these stories are set in Africa, but Gellhorn writes more intensively again.  Not as harrowing as the first book, but with real tension and interest.

The final novella is particularly good.

As long as a book starts and ends well, the middle parts are forgiven and forgotten. 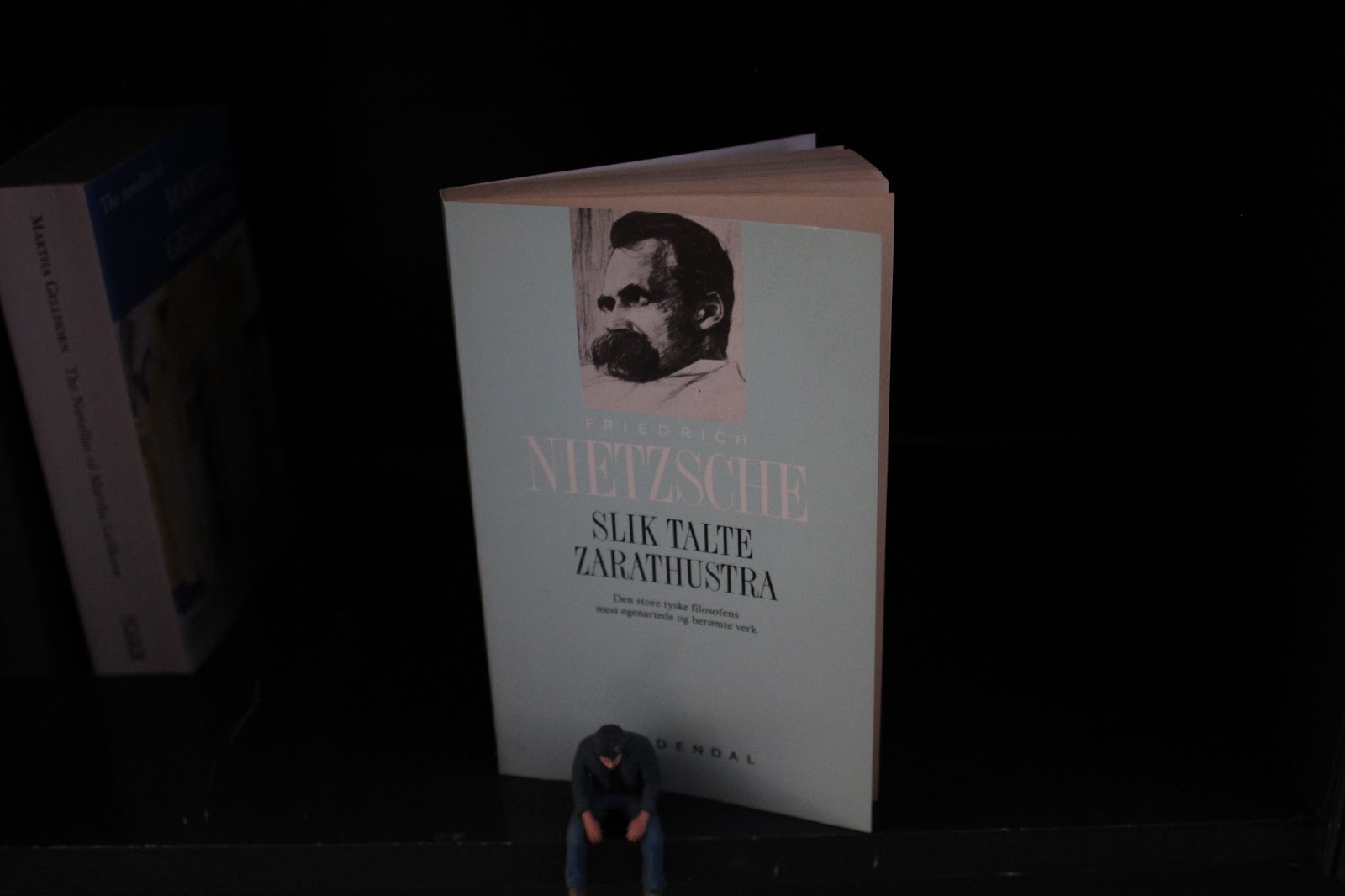 1995 is almost at an end!  After Friedrich Nietzsche has been vanquished, nothing
stands between me and the super-human effort that is finishing something!

So I say: Hah!  This book is most amusing!  Just watch!  I am laughing! 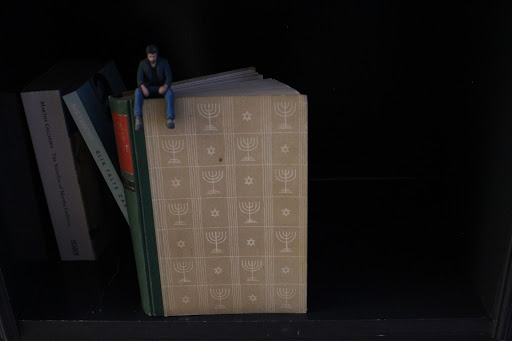 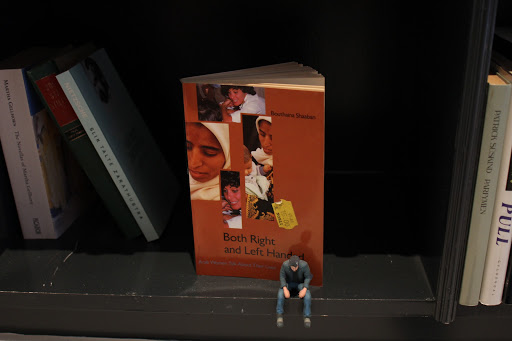 I bought this book by Bouthaina Shaaban in 1995.  More because I had a tendency to buy all books I happened upon published by The Woman’s Press (they have a very neat logo) than because I wanted to read a book subtitled “Arab Women Talk About Their Lives”.

Anyway. Shaaban writes with a quite bracing sense of quiet fury about what had happened to herself, and what’s happening to women in Arab countries.  This book was published in 1988, and is mainly a series of interviews with women, where they, er, talk about their lives.

So we get stories about forced marriages at the age of 12; fathers who kill their daughters who have disobeyed them; brothers who sneak into houses where their sisters have sought refuge (after “shaming” the family in some way) and stabbing their sisters to death; husbands who beat and rape their 13-year old wives.  And so on.

But also stories from women who have participated in revolutions and fighting.  Who have gone to universities and gotten PhDs, and who have made some progress.  At least they feel they have.  The author frequently becomes rather exasperated with the women she interviews, but she mainly presents what they have to say without arguing against them explicitly.

Instead she allows the stories themselves to carry out all the eye-rolling she was probably doing while doing the interviews.  For instance, when she interviews this older woman who complains bitterly about her husband, and how awful he was, and how she was forced to marry him.  Then she interviews the daughter of this mother, who says that she herself was forced by her mother to marry at 12.  And that her father was the nice one.

It’s a recurring theme in the book.  As awful as the Arab men are (and they are very awful indeed in this book), the Arab women are complicit, and can wait to take up the veil.  As one tiresome woman puts it: “For another thing, men no longer follow me in the streets uttering obscene words and dirty jokes.  All Arab men respects women who wear Al Shari.  This is why I feel this dress strengthens my characters and confirms my independence.”  You can hear Shabaan gnashing her teeth.

So it’s an interesting book, but I’m not quite sure about the fact checking.  For instance: 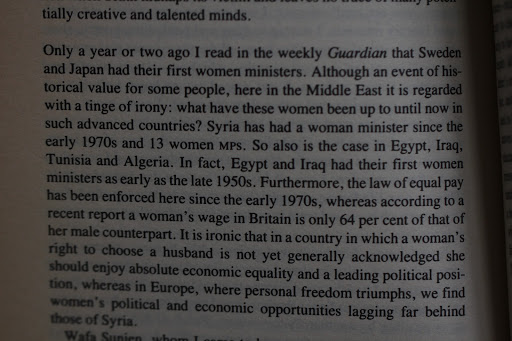 Er, what?  Ok, in 1988 Wikipedia didn’t exist, but 1) the bits about Sweden and Japan are kinda absurd, and the bit where she compares laws in one country to the statistical reality in another are kinda risible.

This genre has to include one uplifting section, so in the final section she visits the southern bits of Algeria, where she interviews people from the Al Tawariqu tribes.  Apparently in this matrilinial society, men wear the veils, rape and violence upon women are unheard of, and both men and women marry and divorce as they see fit.  It’s a kind of paradise: 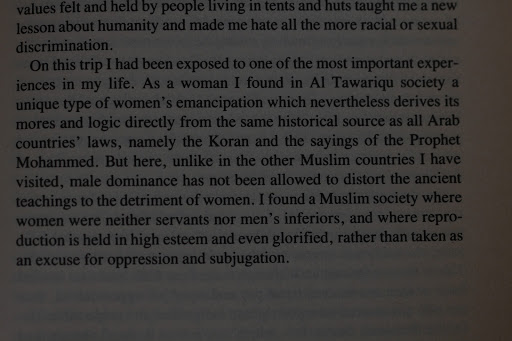 See?  It’s great.  But it’s failing, because it’s coming into further contact with the northern, patriarchal parts of Algeria.

So it’s an interesting book, but it has its problems.  And all the women she interviews speak in exactly the same voice.  I had started to suspect that she had recreated these interviews from notes, but then she mentions that she has a tape recorder (“After talking in a monologue for a long time he pretended to have just noticed my tape recorder and asked me to switch it off because he was not well prepared.  ‘I’ve already done that, I’m sorry to say,’ I answered.  ‘Because my books is devoted to what women think; it is not about what men think of women.'”), so I don’t know why she has edited all these voices into sameyness.  But it doesn’t make the text particularly vibrant.

At the time this book was written, the Muslim Brotherhood were rattling their swords, but most of the women interviewed in this book seem to regard them as a pretty minor nuisance, and the book ends on a hopeful note: 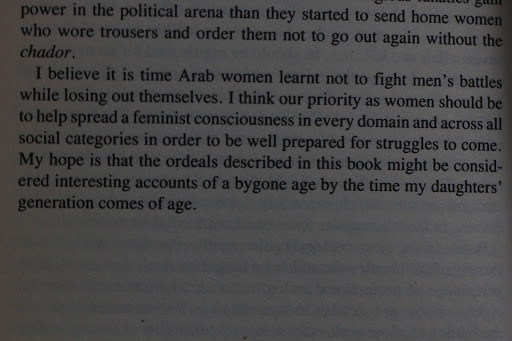 Yes, that would have been nice. 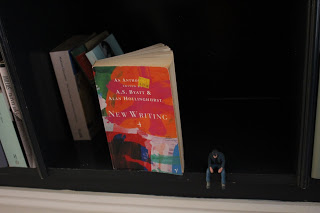 This isn’t a “best of” anthology, or anything.  Apparently the editors just invited a bunch of people to submit stories, poems and excerpts from their upcoming novels, and then they sent it off to the printers.  That’s certainly what it reads like.

It’s not that there isn’t good stuff in here.  It’s just that there’s enough mediocre stuff in here that I started approaching every new text with suspicion.  “Is this going to suck?  I’ve read two pages now, and it’s not any good yet.  Should I ditch it?  Carry on?”

Losing faith in an anthology makes for a very unsatisfactory reading experience. 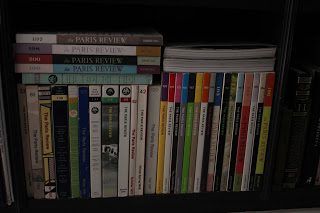 Which reminds me of an anthology I have the utmost confidence in: The Paris Review.  I started picking it up on a whim like a decade ago.  I was intrigued by its “silence”.  There’s no introduction from an editor at the start.  Each contributor has a note in the back, but these are so short as to be more mystifying than enlightening (i.e., “*** has published several novels”, “*** was born in 1953”, and that’s it, sometimes).

There’s just the texts, and they range from pretty good to absofuckinglutely wonderful.  Ok, sometimes they’re a bit on the pretentious side, but I don’t mind that.  I don’t want everything to be a flippant McSweeney’s thing, although I like that, too.

The mixture of short stories, poetry, art “folios”, the occational reportage and the always-enlightening author interviews (“What kind of pencil do you usually write with?  Do you write mostly in the morning or the evening?”) creates a perfect alchemical mixture that’s very satisfying.  I mostly read The Paris Review while travelling, which may also have something to do with my appreciation of the publication.

Anyway, back to New Writing 4.  Like I said, there is good stuff in here.  The hilarious Labels by Louis de Bernières.  The ambiguously optimistic A Geographer by Philip Hensher.  The heartbreaking A Day by William Trevor.

But there’s way too much meh here.

You know that old question about what an editor does for a living?  The answer is: Not work here.