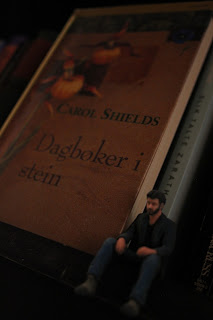 Or “The Stone Diaries” as it was called in English.

The reason this one never got read is probably that I suspected it to be respectable and stuff.

And it is.  It’s very respectable.

I never ever ever read anything about a book before I read it.  I don’t read the stuff on the back, or on the flaps, or reviews.  It much more amusing to read stuff when you don’t know how it’s supposed to be read.

I do, however, love reading reviews of stuff after I’ve read it.  If I loathe a book, I love going to Amazon.com and read the other 1- and 2-star reviews and getting my views validated.  Then reading the 5-star reviews, and see how moronic their reasons for liking the dreck is.

And the opposite thing works, too.  If I love a book, I read the 5-star reviews and congratulate myself on having such good taste, and then I read the 1-star reviews written by obviously sup-par twits who didn’t get the point at all.

I thought this book was kinda “eh”.  Not bad, not particularly good, but definitely respectable.  So I binged it after I finished reading it, and it turns out that Carol Shields won the Pulitzer Prize for fiction for this book, which I feel is such a confirmation.  Mainstream mediocrity seems to be the essence of that prize.

So there you are.