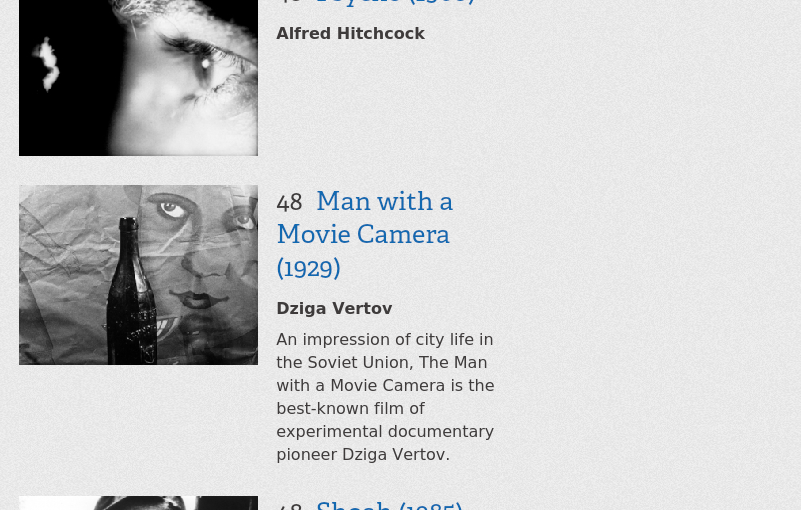 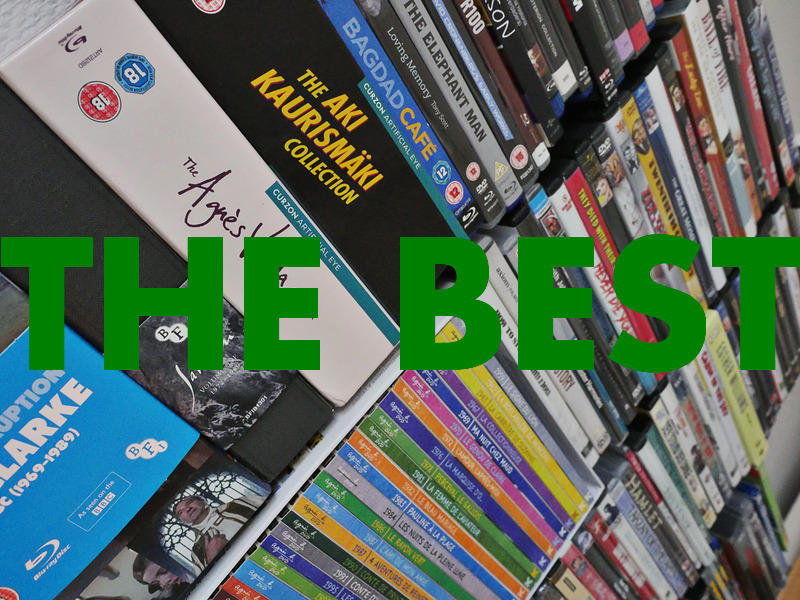 As a contrast, after watching a year’s worth of Netflix movies, I thought it would be fun to watch all the films on the Sight & Sound directors’ poll, so I did, and probably bored all you all to death while doing it.

Or was that the COVID?

It was probably the COVID. *crosses fingers*

It’s will probably surprise nobody when I say that the movies on that list are, on the whole, pretty spiffy. I had fun! I discovered a whole bunch of great movies that I hadn’t seen before, so: Mission accomplished.

I was going to do a bunch of data-driven charts based on the movies, but the idea didn’t occur to me until I was a few months into watching, and trying to recall data points now is just too much work. I hate work.

But I did do the Bechdel test, since that’s a service I can just query.

Here’s the results: There were 32 movies with no rating (or I was too lazy to figure out under what name the movies were filed under); 23 films that passes the test and 50 films that do not pass the test. Yes, I know the weaknesses of the test — there are experimental movies on the list where nobody speaks at all, and those fail the test, of course. And failing the test doesn’t mean that it’s a bad movie, but it’s… It’s something.

I wonder how many films on the list would fail the reverse Bechdel test (i.e., flip the genders). Persona would, for instance.

It’s not a very diverse list of films, either: I don’t think a single one of these have a black actor in one of the central roles? (Please correct me if I misremember.) The vast majority of the films are from the US or from Europe, and the few that aren’t are from Japan or Hong Kong. (And one from Iran and one from Bangladesh.) There’s a single movie directed by a woman (Claire Denis) and that is also the single movie that is (possibly) about an LGBTQ+ person. (Well, if you ignore Salò, which I think you should.)

This is a list that is overwhelmingly by, and is about, heterosexual white guys.

I’m sure you’re all shocked. SHOCKED I TELLS YA! I brings ya so much exciting news.

But it is kinda embarrassing, and Sight & Sound already knows:

Female filmmakers also continue to be underserved by the consensus: while a quarter of our voters were women, there were barely nine female-directed titles in our top 250. And while we attempted to extend our invitations to more particular connoisseurs of documentary, animation, experimental and short films, there’ve been few surprises to disrupt the dominance of the ‘art’ feature film – the most notable exceptions being at numbers 8 and 29…

I was wondering about the distribution of upper class/working class concerns in the films… but that sounds like way, way too much work for me. My guess is… that it’s kinda even? For every Citizen Kane, there’s a Bicycle Thief. But I may well be mistaken.

It’s also a list that is heavily weighted towards straightforwardly narrative films. That is, there’s very few experimental films here. I think there’s like… five?… that don’t have a narrative focus. It’s also very heavily weighted towards deep and serious movies. I love the deepness; I surely does; but just a handful of comedies seems… odd? If I were to do a list of swell flicks, there’d be more of them.

And: There’s a single musical on the list. It’s a fine movie; it’s a delight — but it’s not one I’d even put on my top ten of musicals. But it’s easy to see how it ended up here: It’s muscular and swaggering.

It’s also rather striking how many movies from the 70s are on this list, but probably just an artefact of the age distribution of the directors voting. I mean, I don’t mind watching four movies by John Cassavetes — but it’s… it’s a thing.

This person has done an analysis of the poll over the years. I think the main take-away is that the list isn’t very stable? I’m guessing some of the 70s movies will be gone in the 2022 poll to be replaced by… 80s movies? Dear god! Please don’t have The Goonies on the next edition!