Anything Goes! edited by Gary Groth. 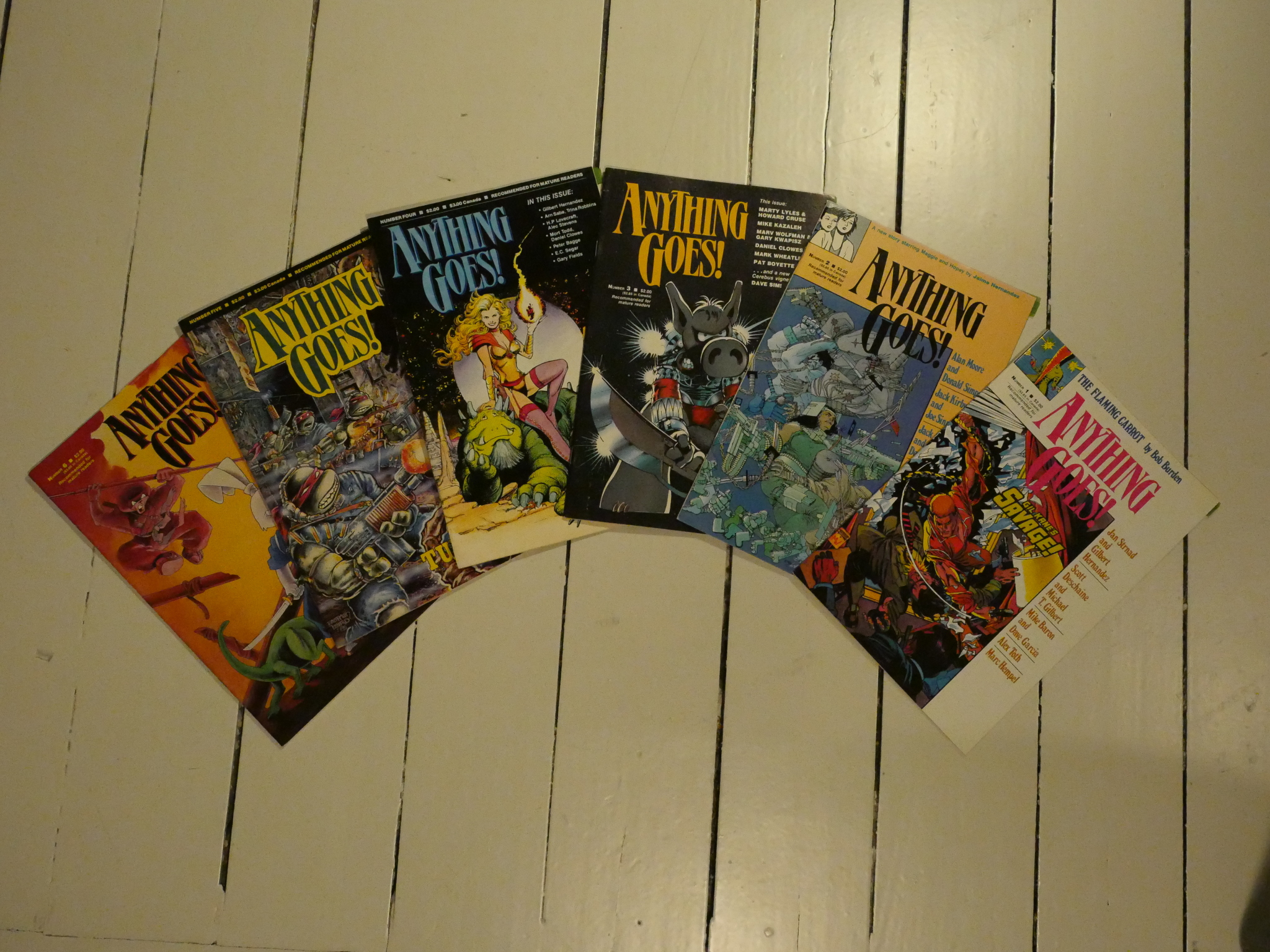 I just realised that the end was in sight for this blog series, so my enthusiasm returned. There may be some slight pauses before we get to the end, as I’m waiting for some issues to arrive to complete some runs…

Anyway! Anything Goes! is, perhaps, not formally a Fantagraphics series: It’s published by The Comics Journal as a benefit series to help pay the costs from the lawsuit brought on by Michael Fleisher. 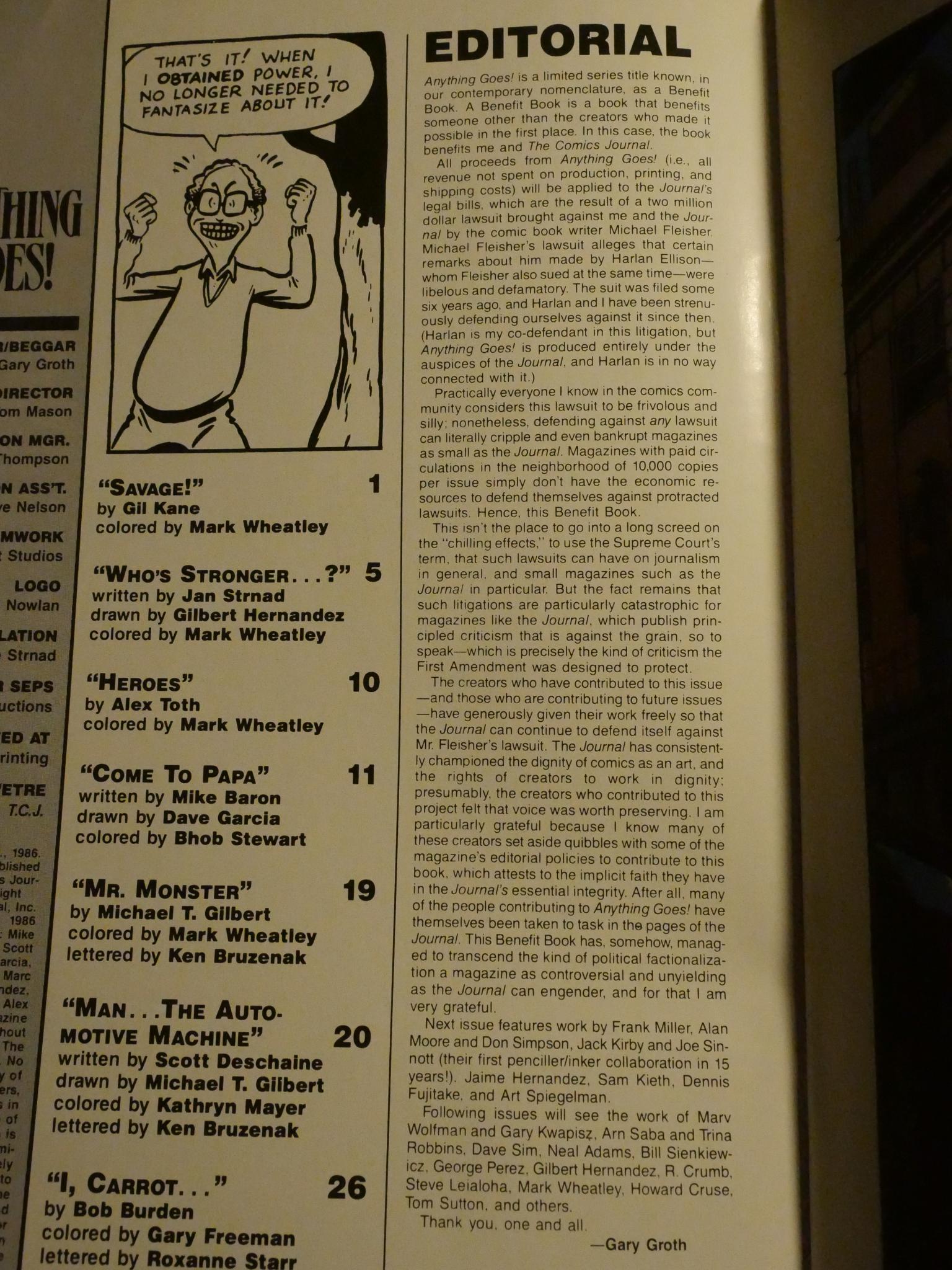 I found that if I read this editorial using Comic Book Guy’s voice, it’s funnier. 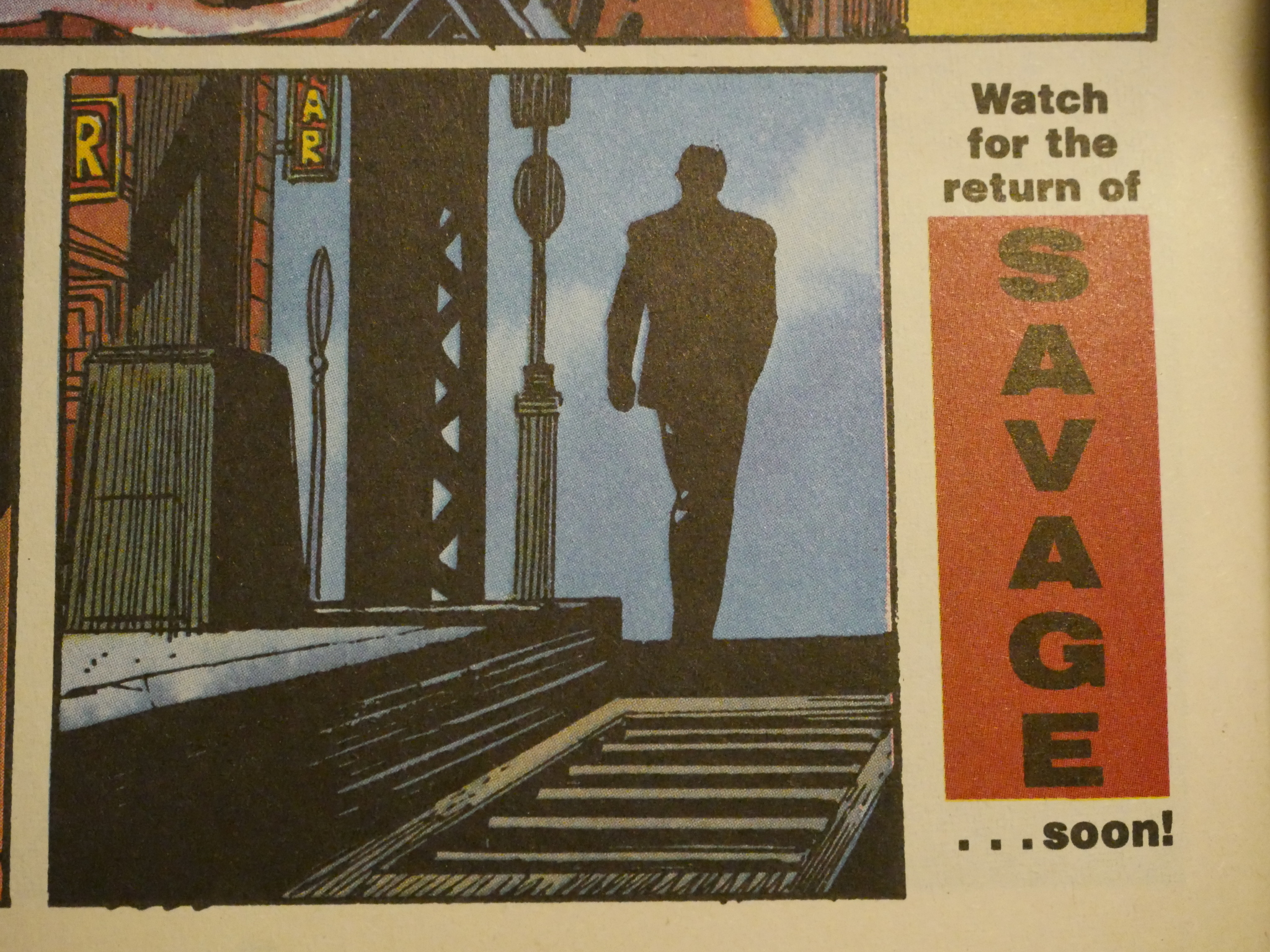 The contributors to this series are mainly people who have regular series with Fantagraphics, which should perhaps not come as much of a surprise. But there is a handful of “name” artists (and writers) unaffiliated with Fantagraphics that pop up here with pieces done specially for this series: Frank Miller, Bill Sienkiewicz, Dave Sim, George Perez, Alan Moore…

Above we have a panel from a very violent four page, er, story by Gil Kane, that seems to point to Kane doing a new His Name Is… Savage! series soon. That didn’t happen. 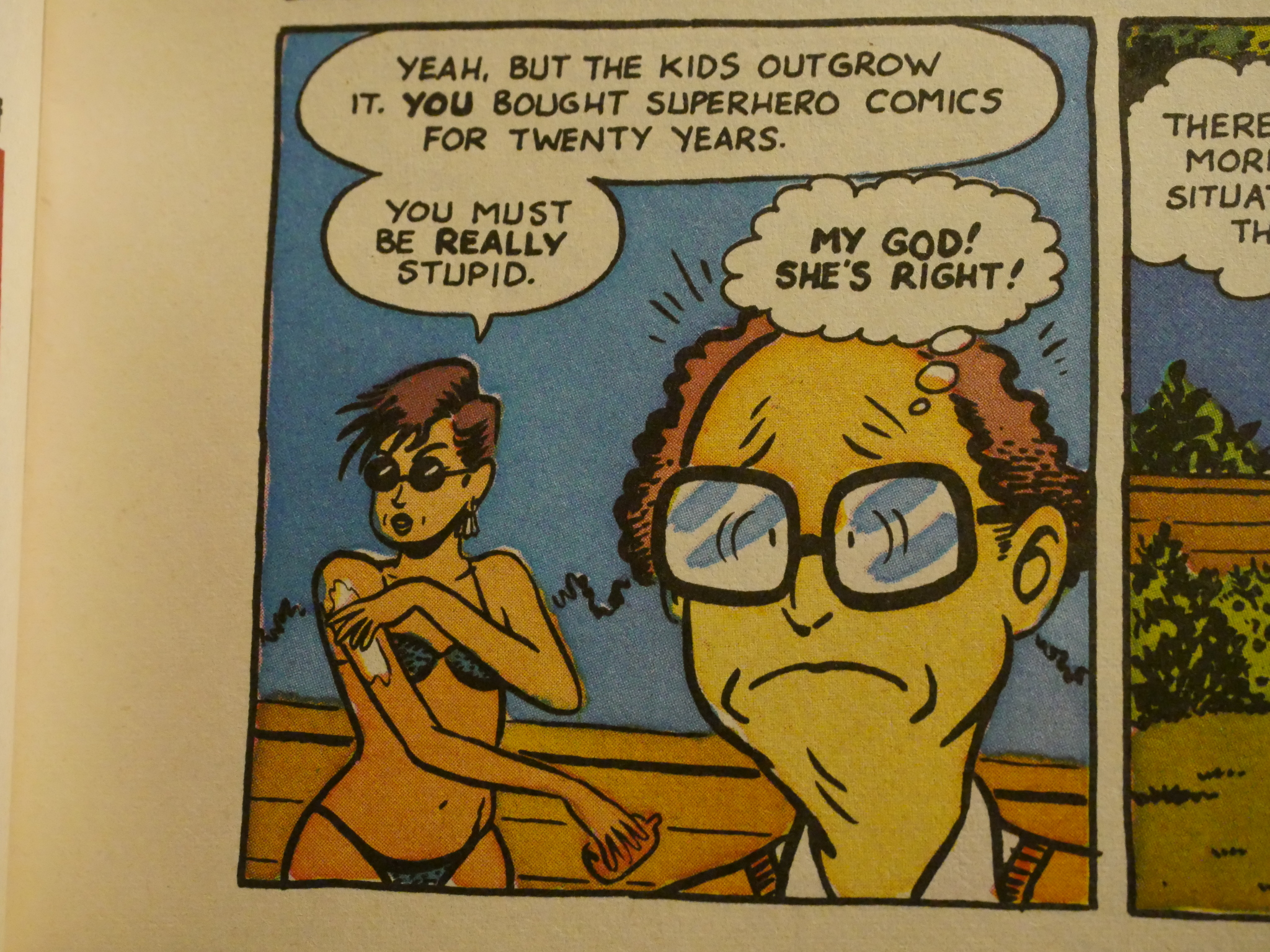 Beto Hernandez illustrates a funny, apparently autobiographical story by Jan Strnad. Hernandez also contributed a solo piece later that talked more directly about the issues surrounding the series; one of only two strips to do so, I think. 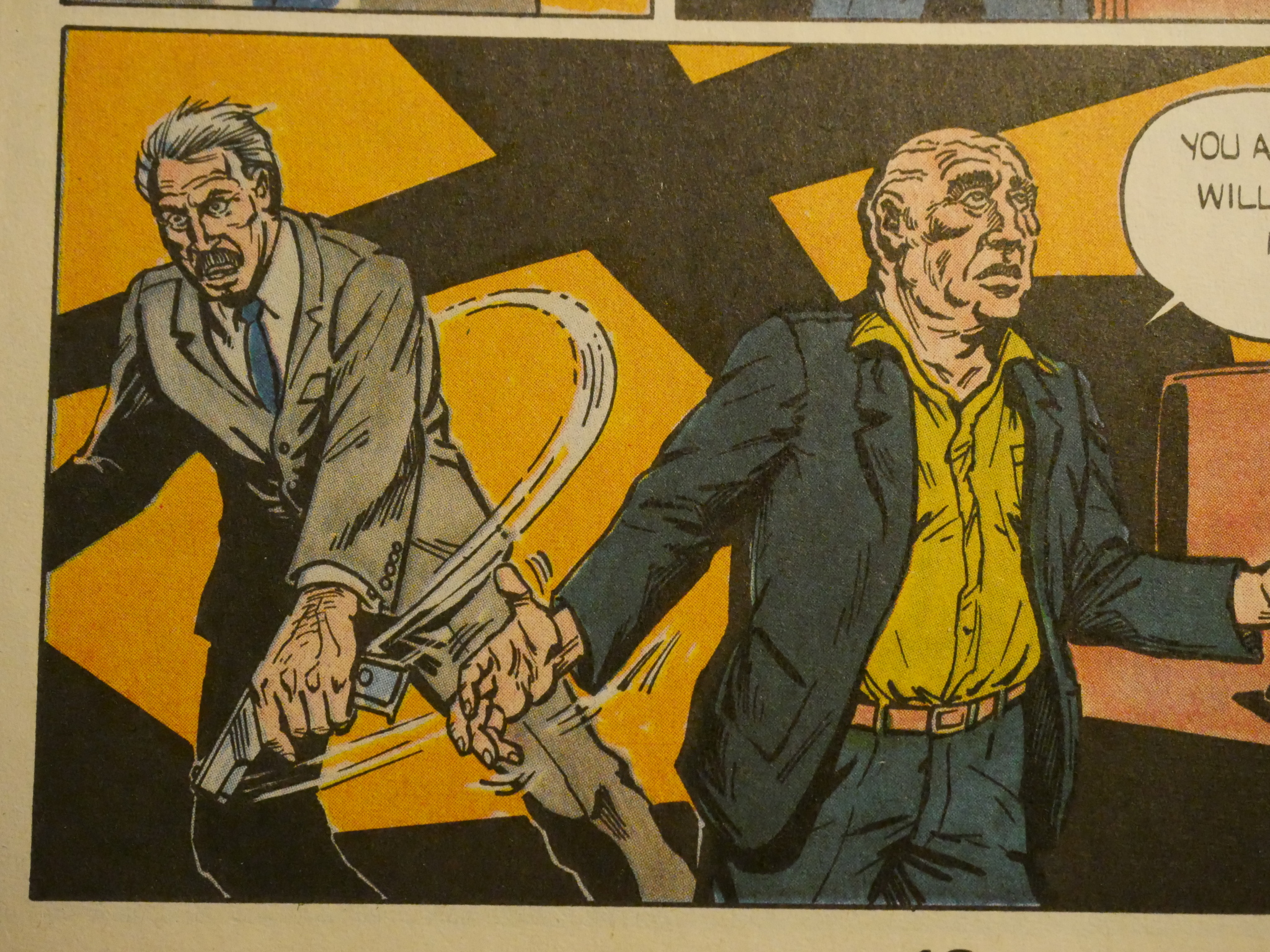 It’s not all superstars, though. Here’s Mike Baron and Dave Garcia. I wonder what the editorial practices are when doing a benefit book. If somebody sends you something that’s… not good, then do you reject it? That seems kinda rude. This story isn’t that bad, but there are some real clunkers later in the series that are barely readable. 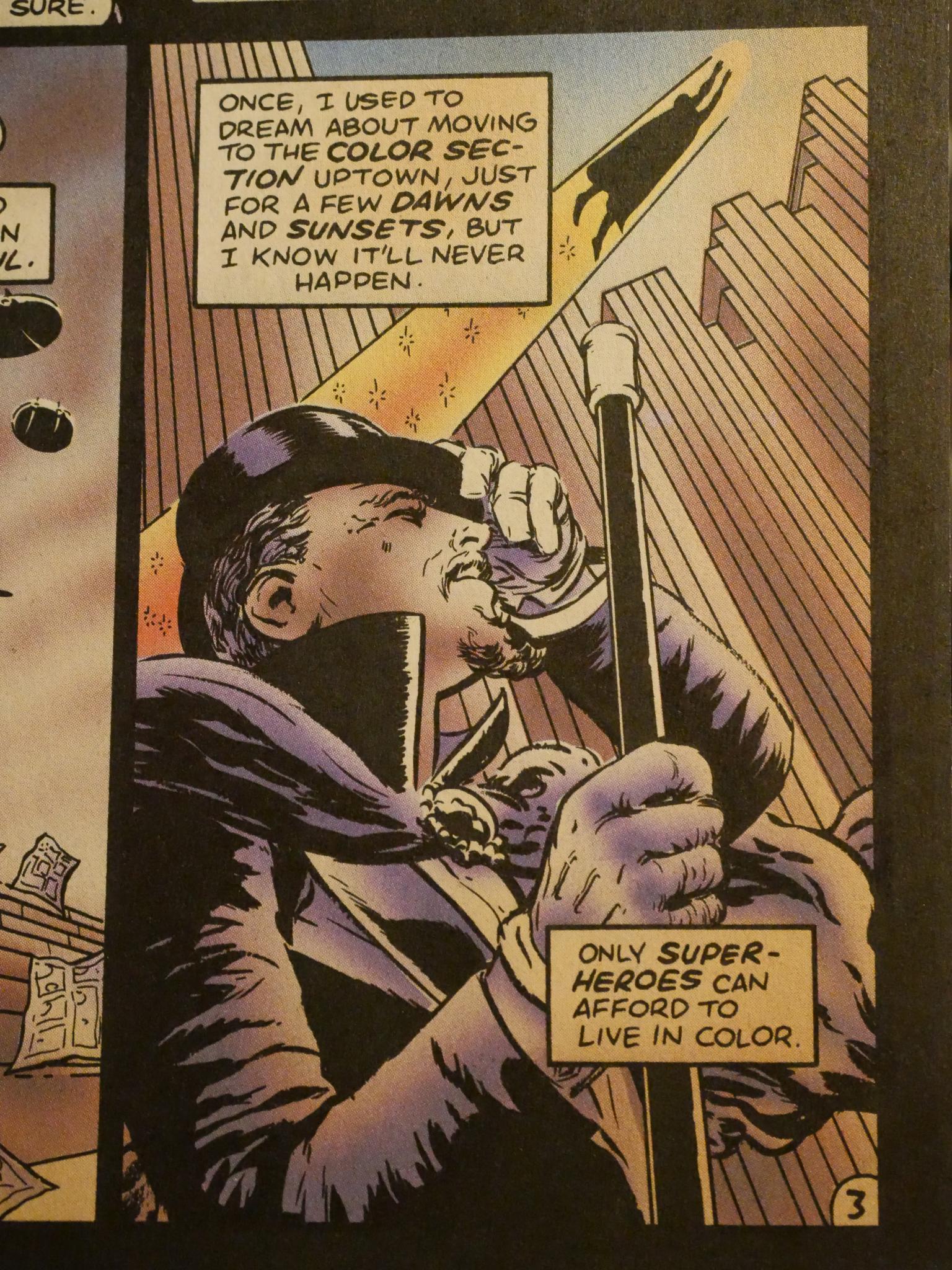 The only story that’s had much of an afterlife is this one: “In Pictopia” by Alan Moore, Donald Simpson, Pete Poplaski and Mike Kazaleh (*phew*). It the kind of elegiac fan service piece that Moore excels at, about (basically) how comics these days suck. Allegory alert! 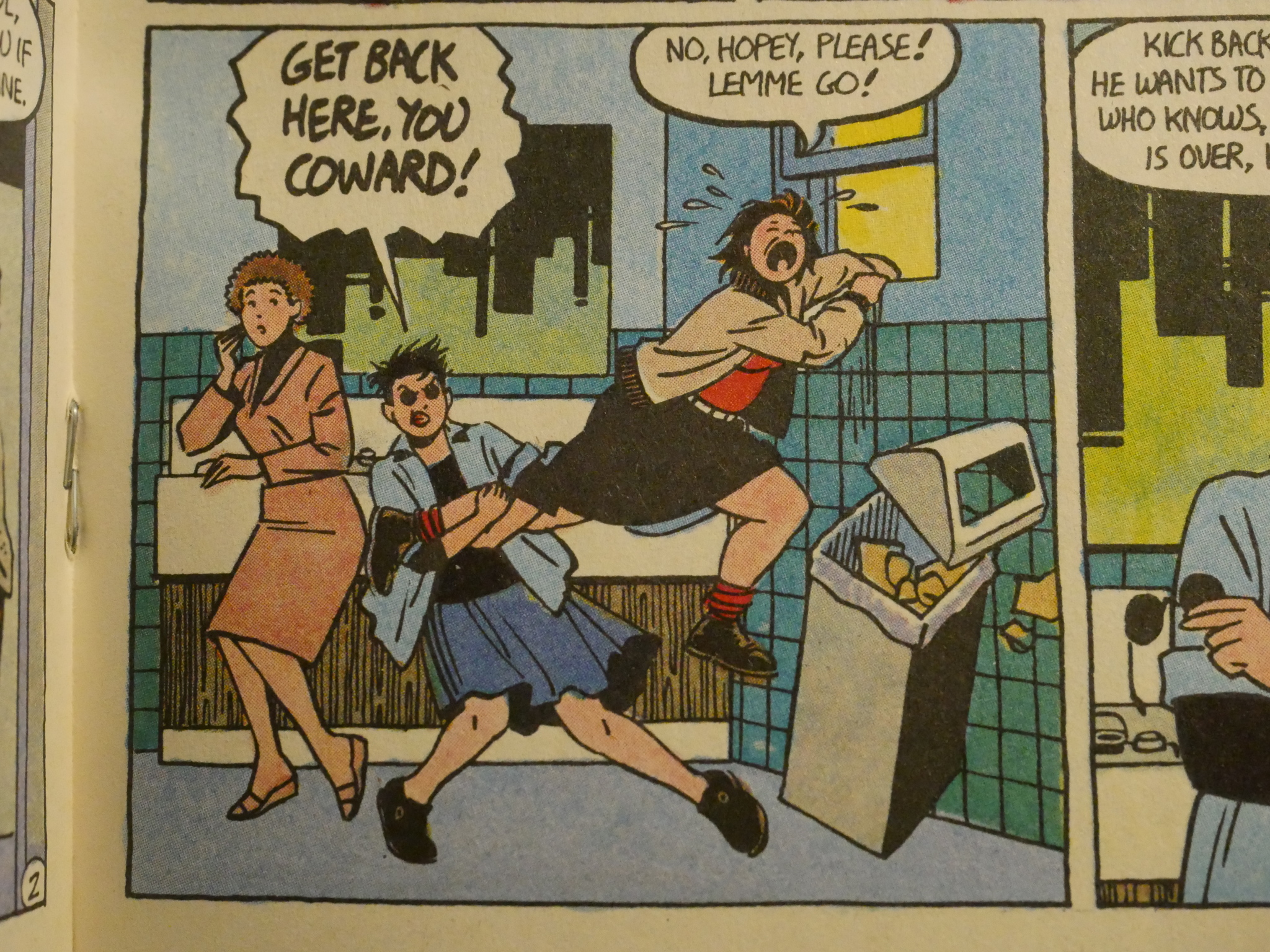 Jaime Hernandez pops in with an amusing four page Locas story. Those were the days. 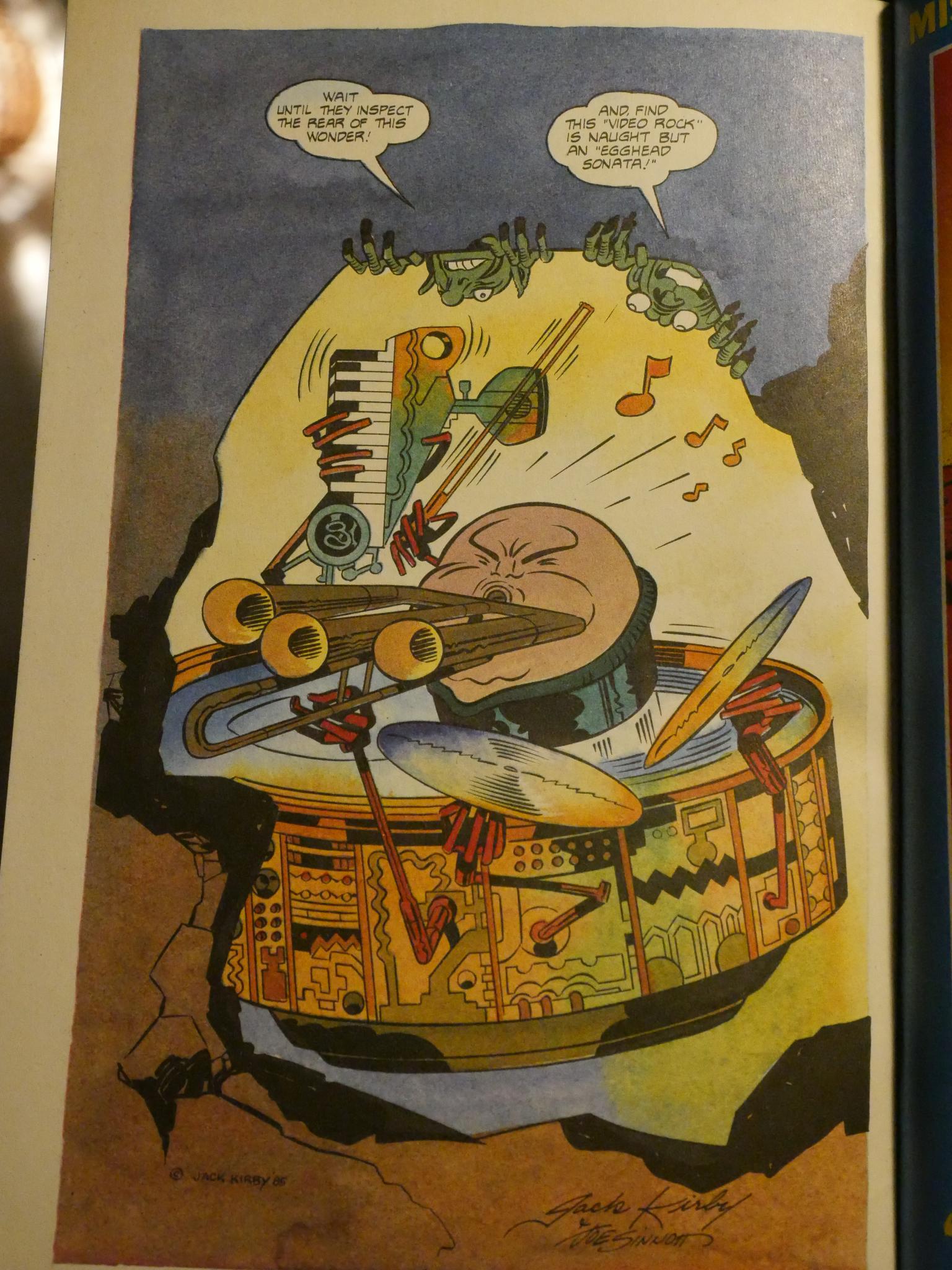 Jack Kirby and Joe Sinnott team up for the first time in years. 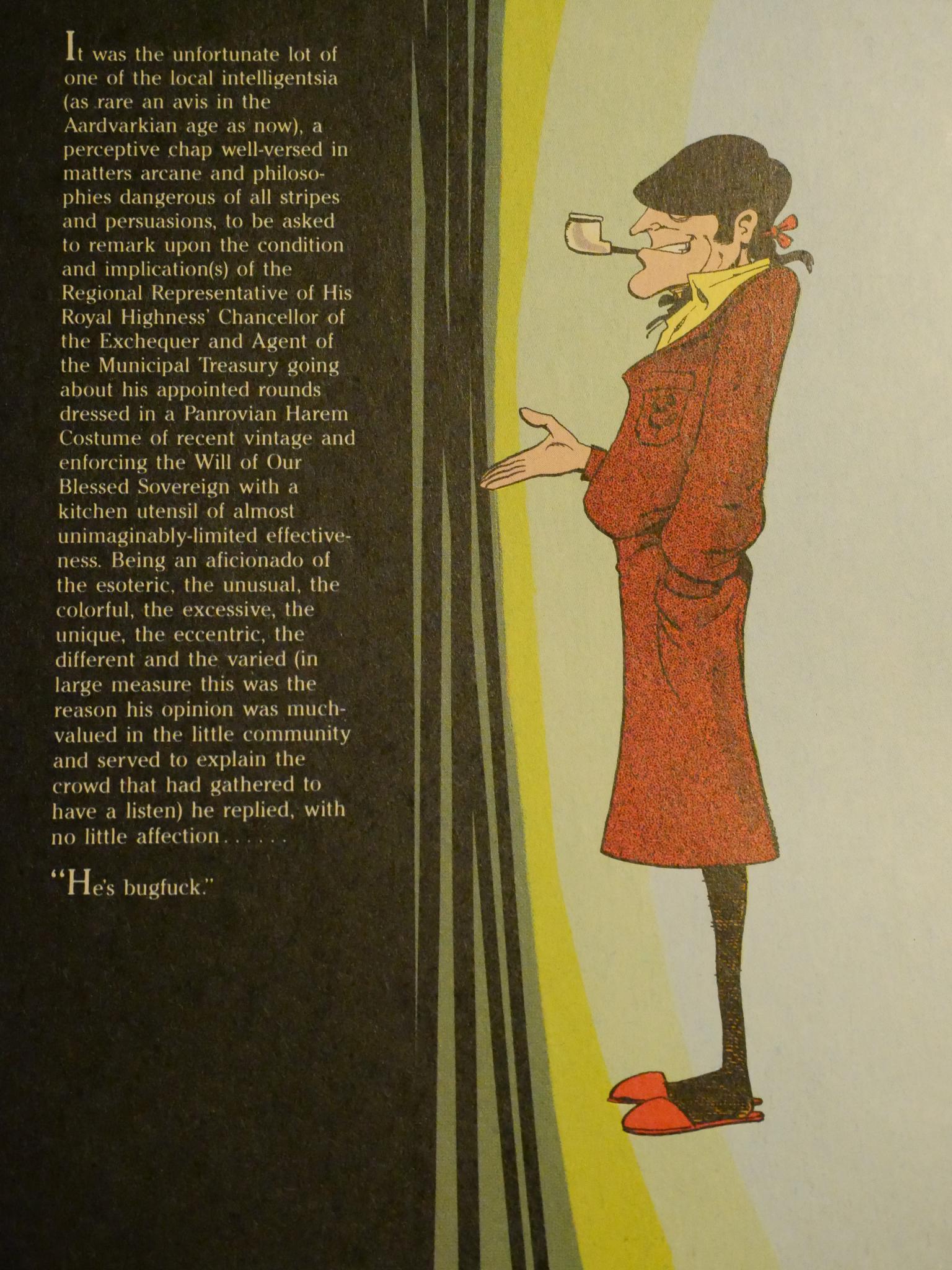 Dave Sim does a very text heavy three page vignette, and is the only other person (other than Beto Hernandez) to refer to the Fleisher case. (The case was about Harlan Ellison calling Fleisher “bugfuck” in an interview in the Comics Journal.)

Sim’s prose is as leaden as always. If I ever re-read Cerebus, I think I’ll just skip past all the non-comics pages. 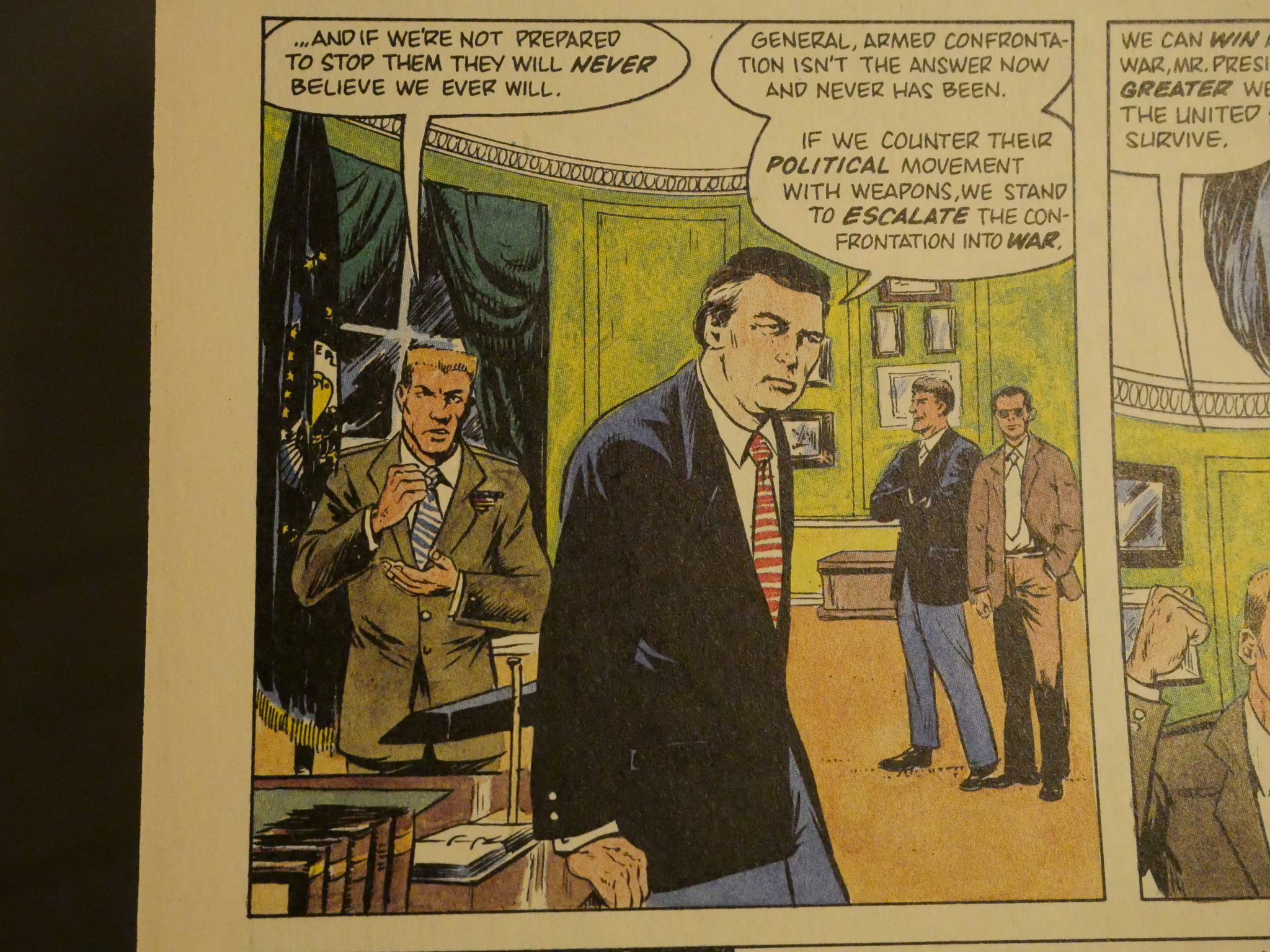 The colours have to be mentioned. SM Graphics did the separations, and they’re as muddily psychedelic as always. (See the Dalgoda article for further, er, appreciation of their… singular vision.) 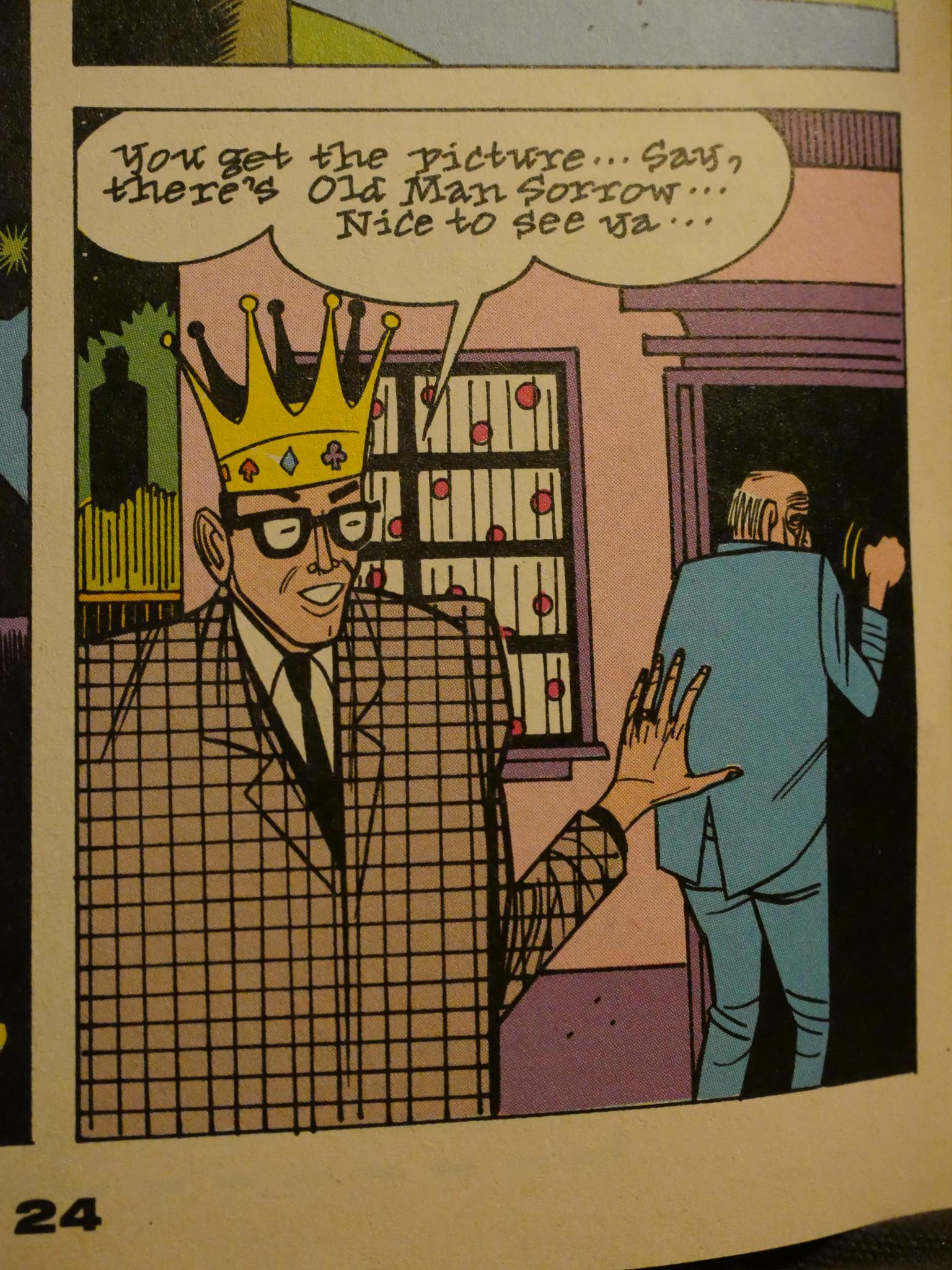 Has Daniel Clowes ever looked as Bernie Kriegsteinish as he does in the Lloyd Llewellyn short in issue four? Perhaps. But not a lot. I love the stiffness. 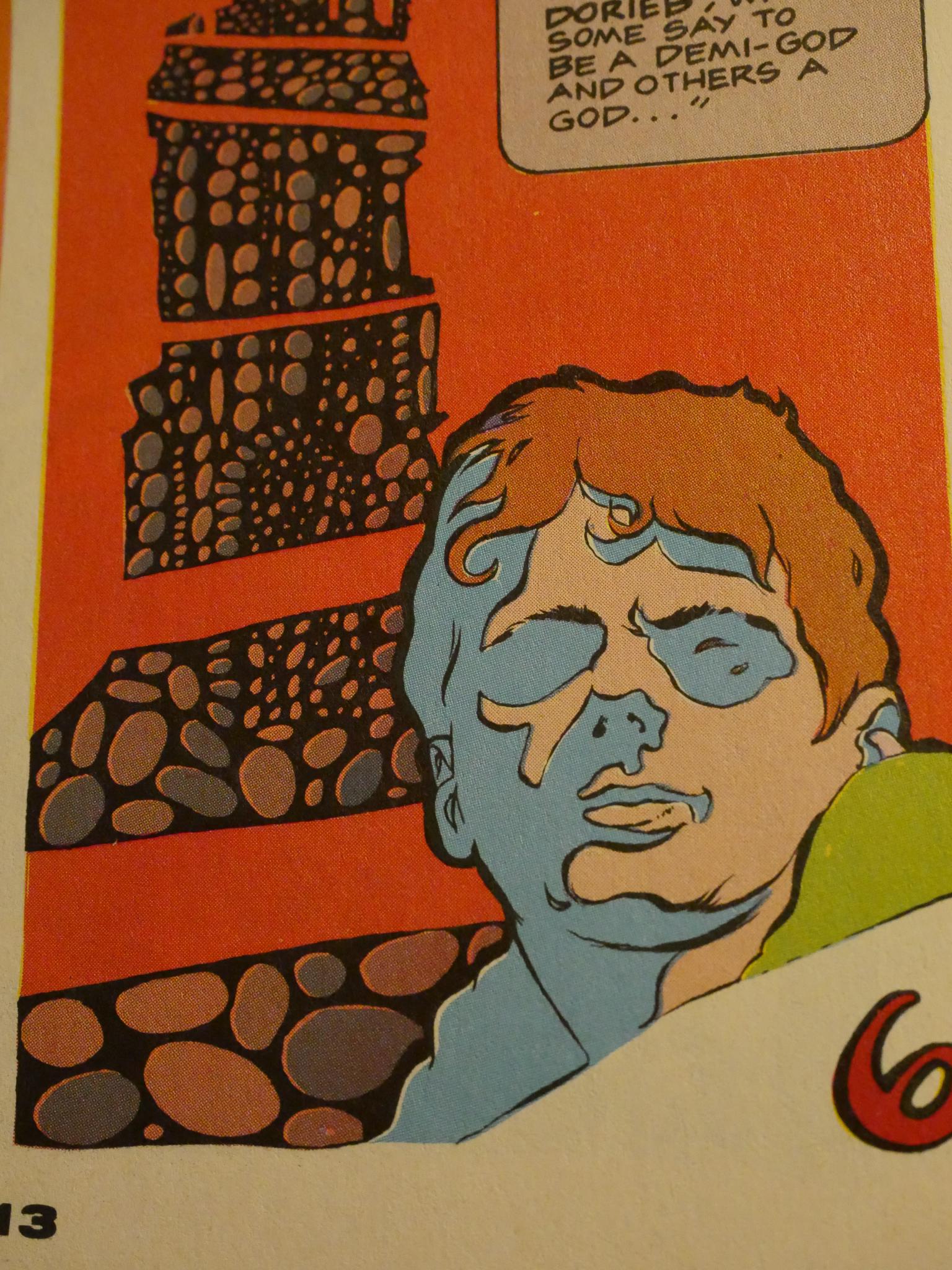 Hey! Whatever happened to Alec Stevens? He’s a very distinctive stylist… Hm… oh, he’s now totally christian and an instructor with the Kubert school, according to Wikipedia. That may explain why it’s been a while since I’ve seen any work from him… 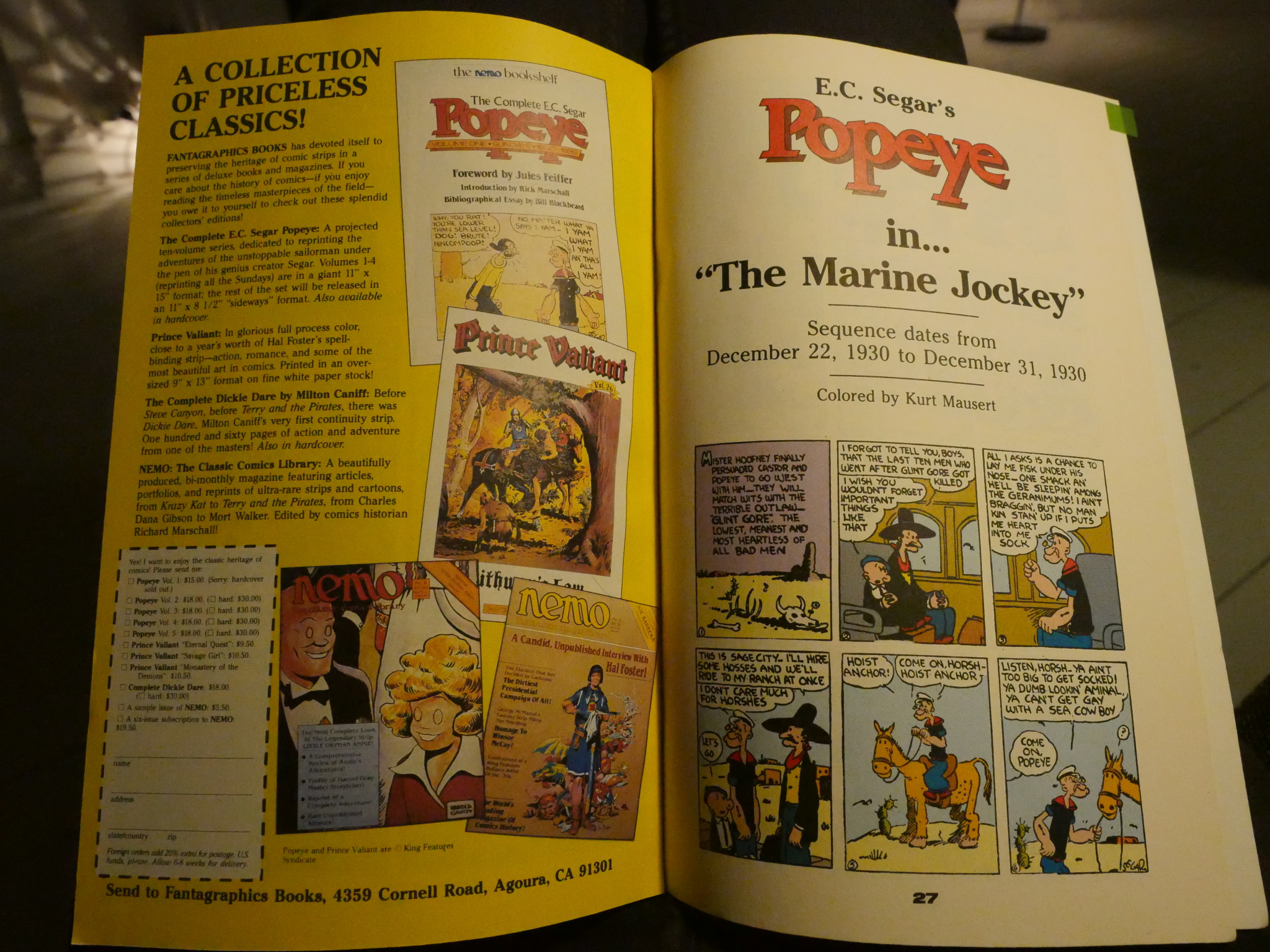 By issue four, they started padding the issues with reprints and stuff. I know the point is to make money to pay the lawyers, but it still feels like a cheat. 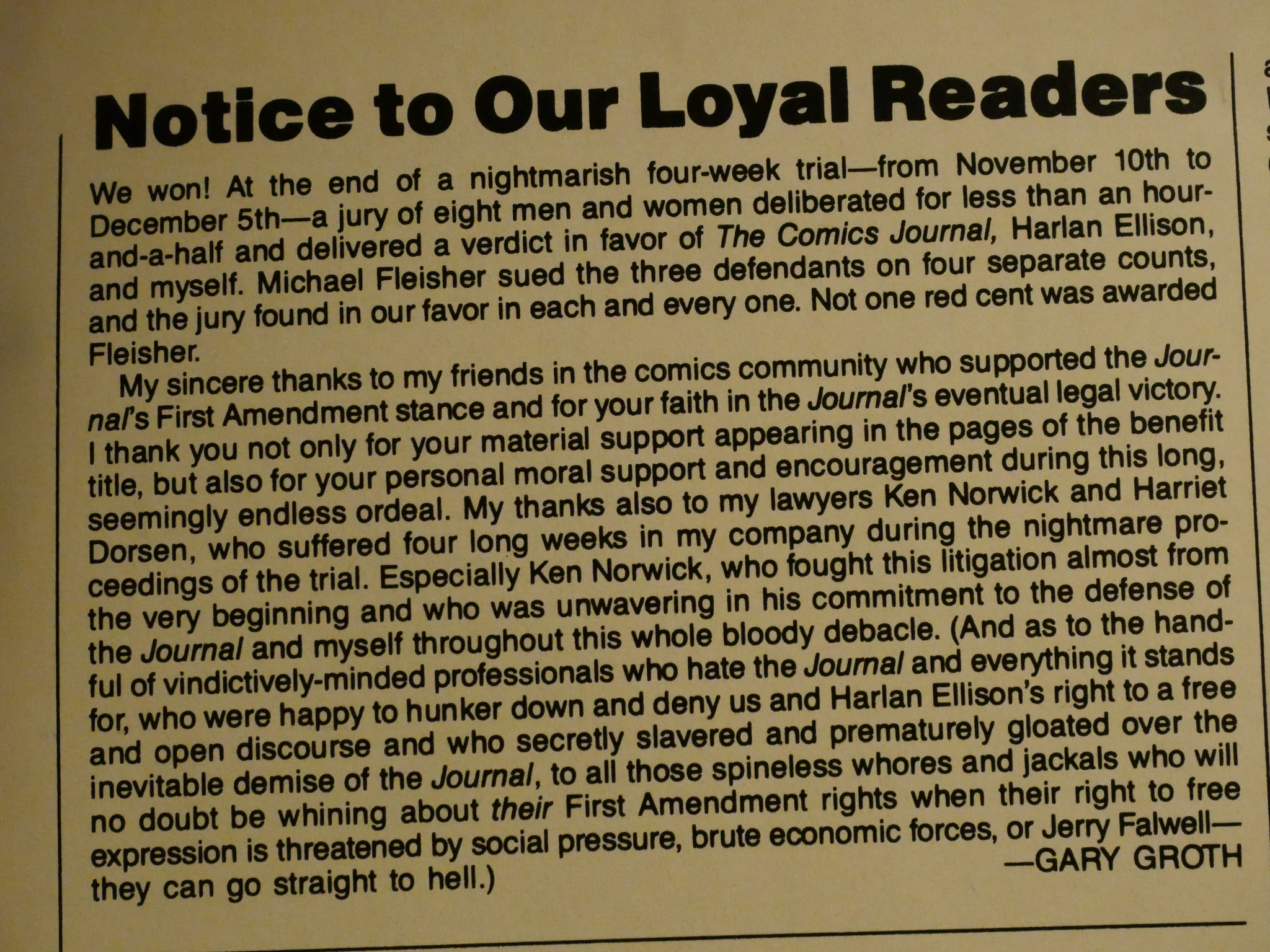 Groth takes the Gracious Winner of the Year award. Just kidding! I would have been gloating like that, too, if something as stupid as the Fleisher lawsuit had ever happened to me (and I’d won). 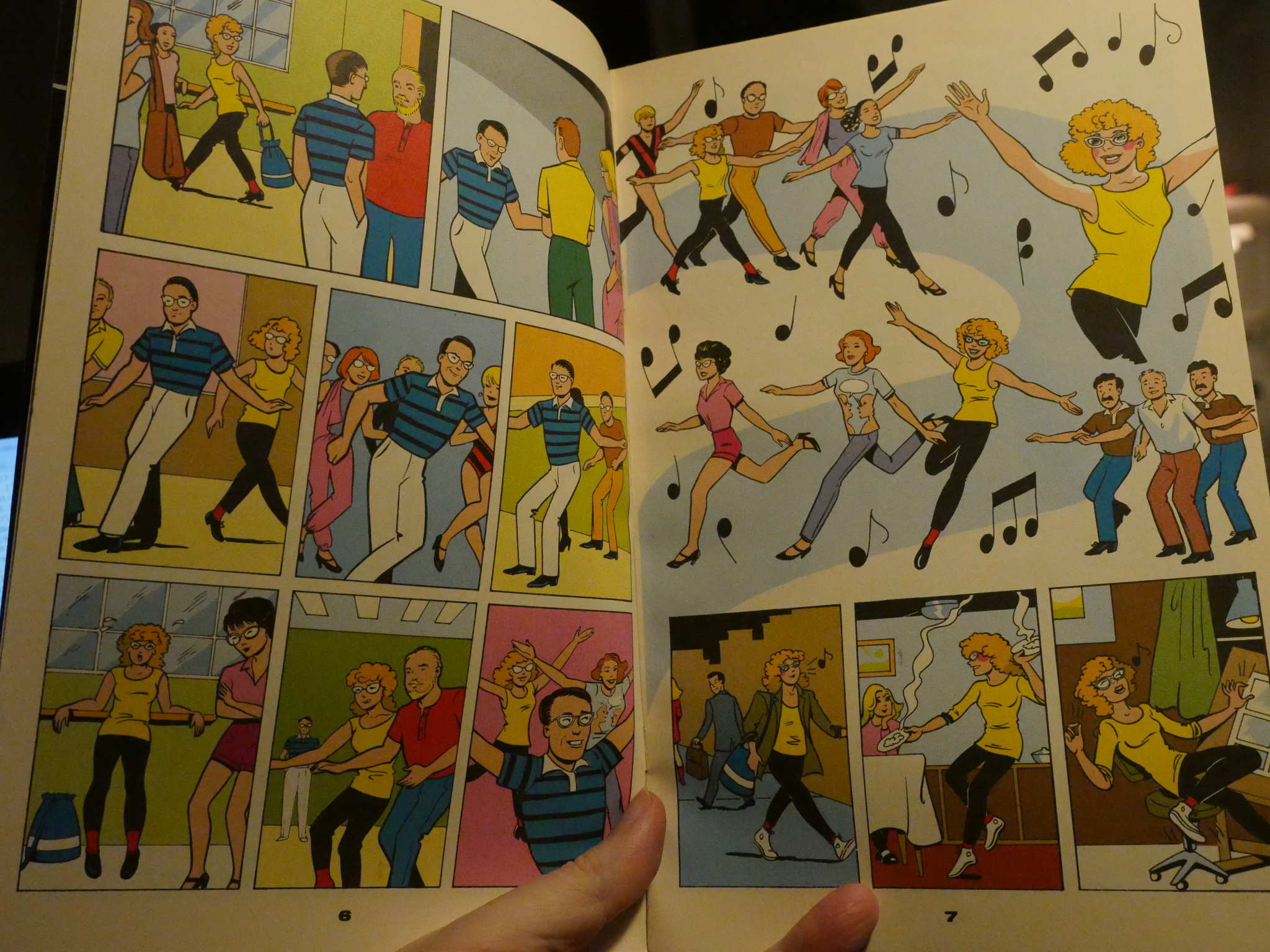 Like I alluded to above, I have no idea how the editorial process for a book like this works. Here we have a couple of pages from a rather delightful Arn Saba/Trina Robbins collaboration, and Robbins is the only female artist that appears throughout these issues, which is beyond strange. (Nadine Messner-Loebs collaborates on the writing of a short Journey strip with William Messner-Loebs later in this series, and that’s it for women.) 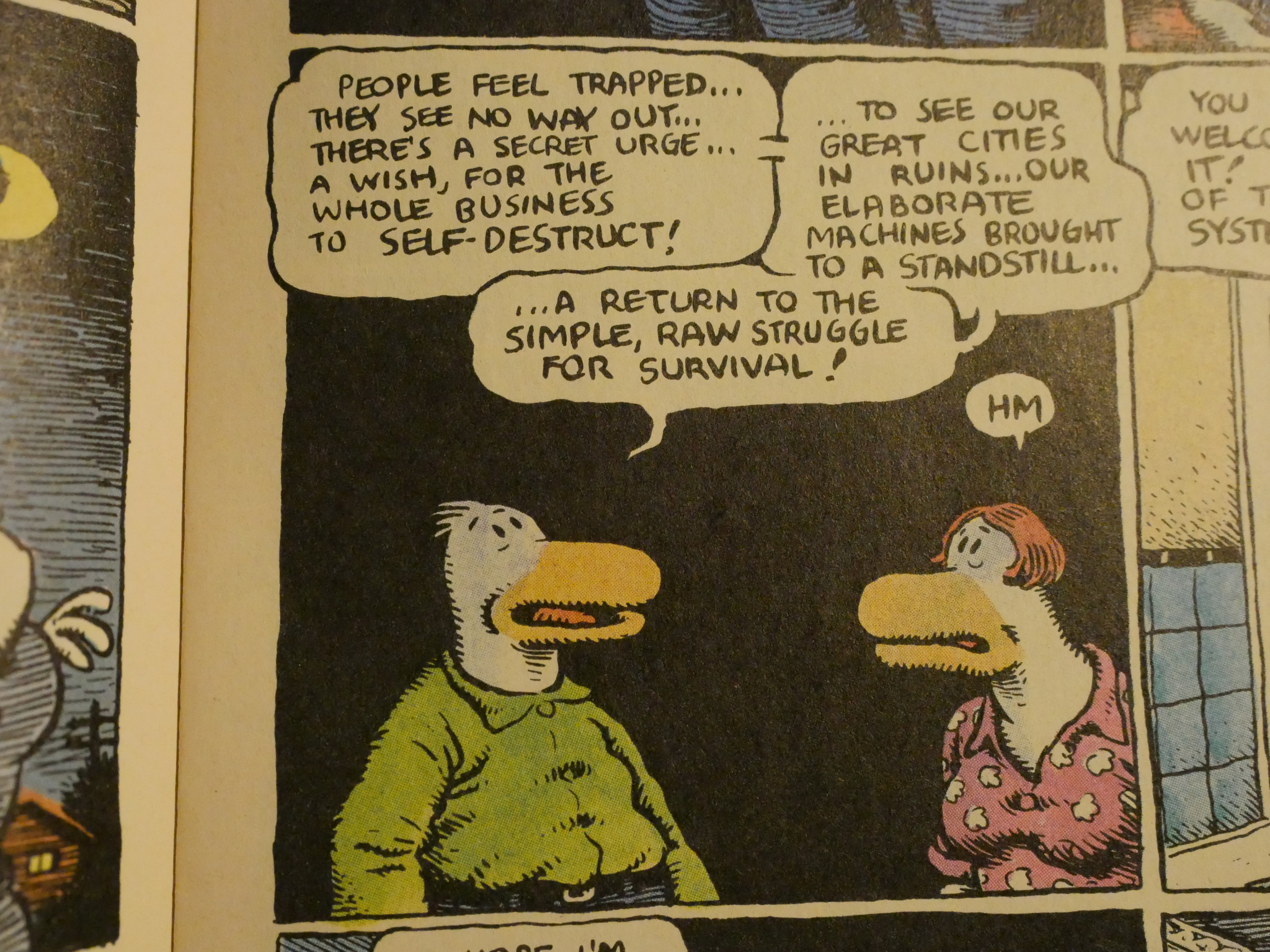 A Robert Crumb strip from 1977 is reprinted in the fifth issue. We here see Crumb’s prescience: He correctly foresees The Walking Dead 35 years later. The final issue is inexplicably in black-and-white. (An old Eddie Campbell piece above.) Which makes me curious: Did Fantagraphics, I mean The Comics Journal, make much money off of this series? Making any money from publishing alternative comics is a pretty chancy thing, after all.

But perhaps they did sell a shitload of these? Somehow? You can pick up pretty much all the issues for less than cover price now, which seems to indicate both that they’re commonly available, and… that people didn’t feel the need to hold on to them.