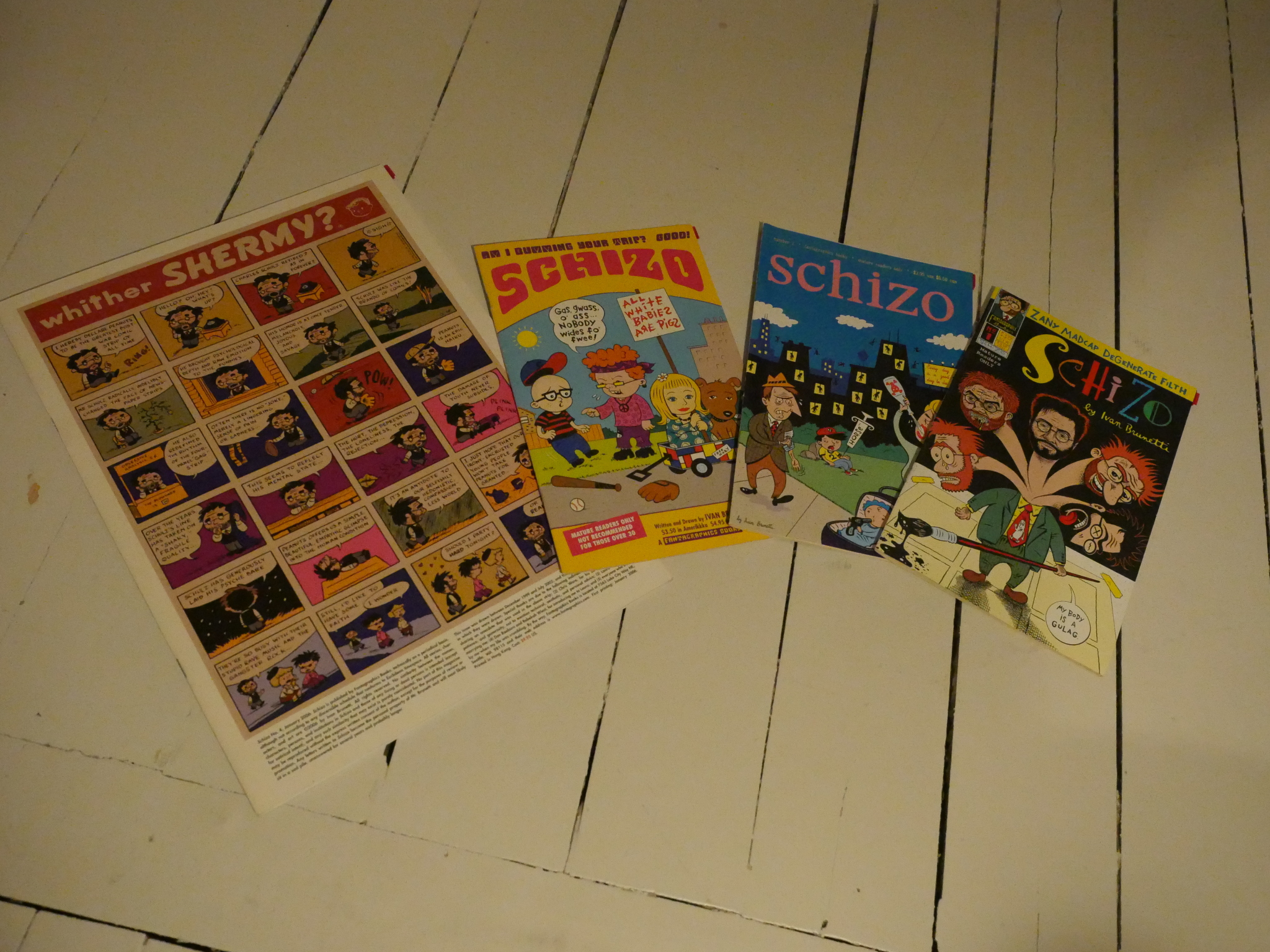 But more intense. And better. Much, much better.

So let’s get reading. 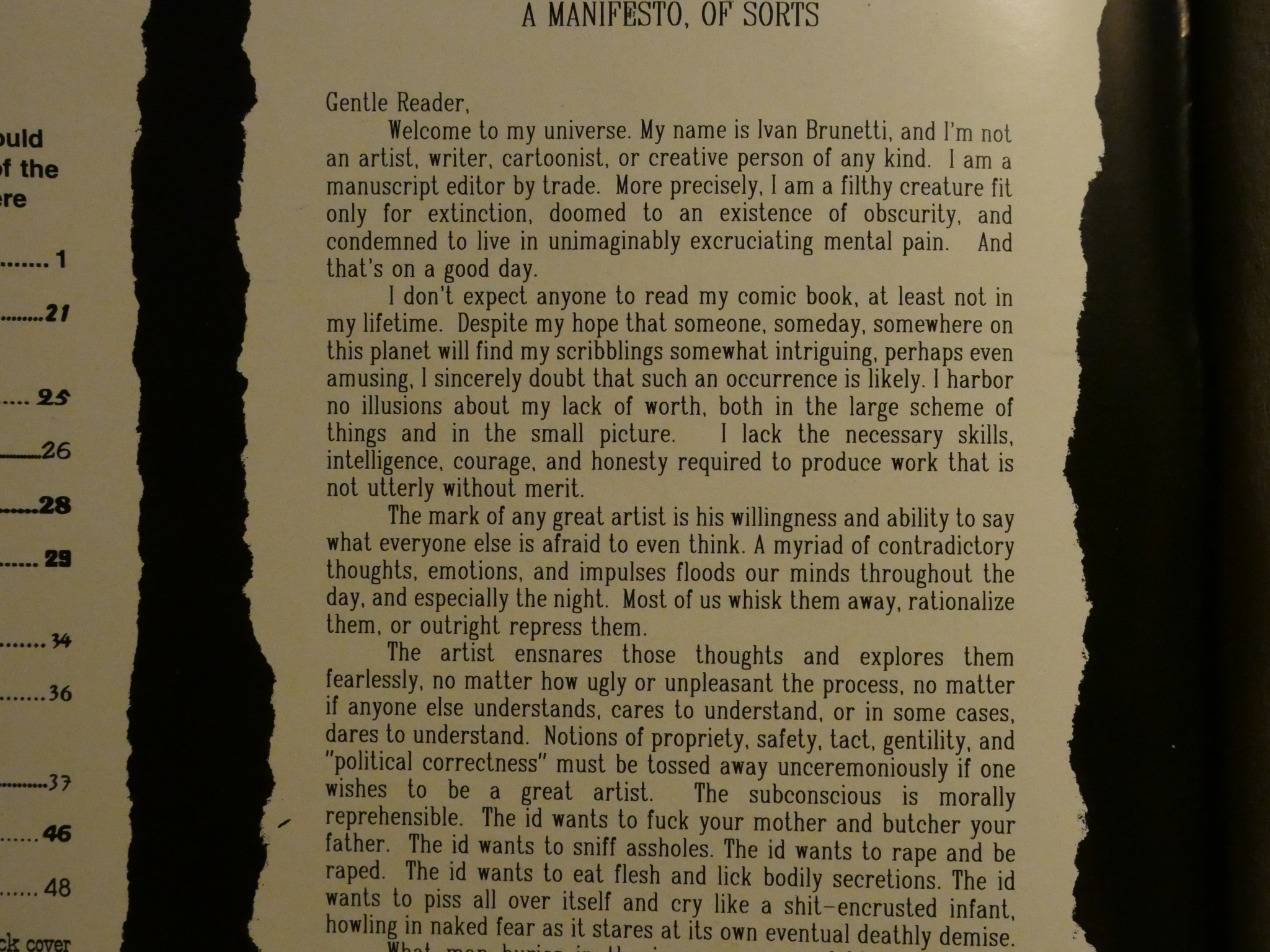 Oh, my. That’s more grandiose than I remembered.

The first two issues are 48 pages each, and were published within a few months of each other. This suggests to me that perhaps Brunetti had created all the pieces over a longer time period? 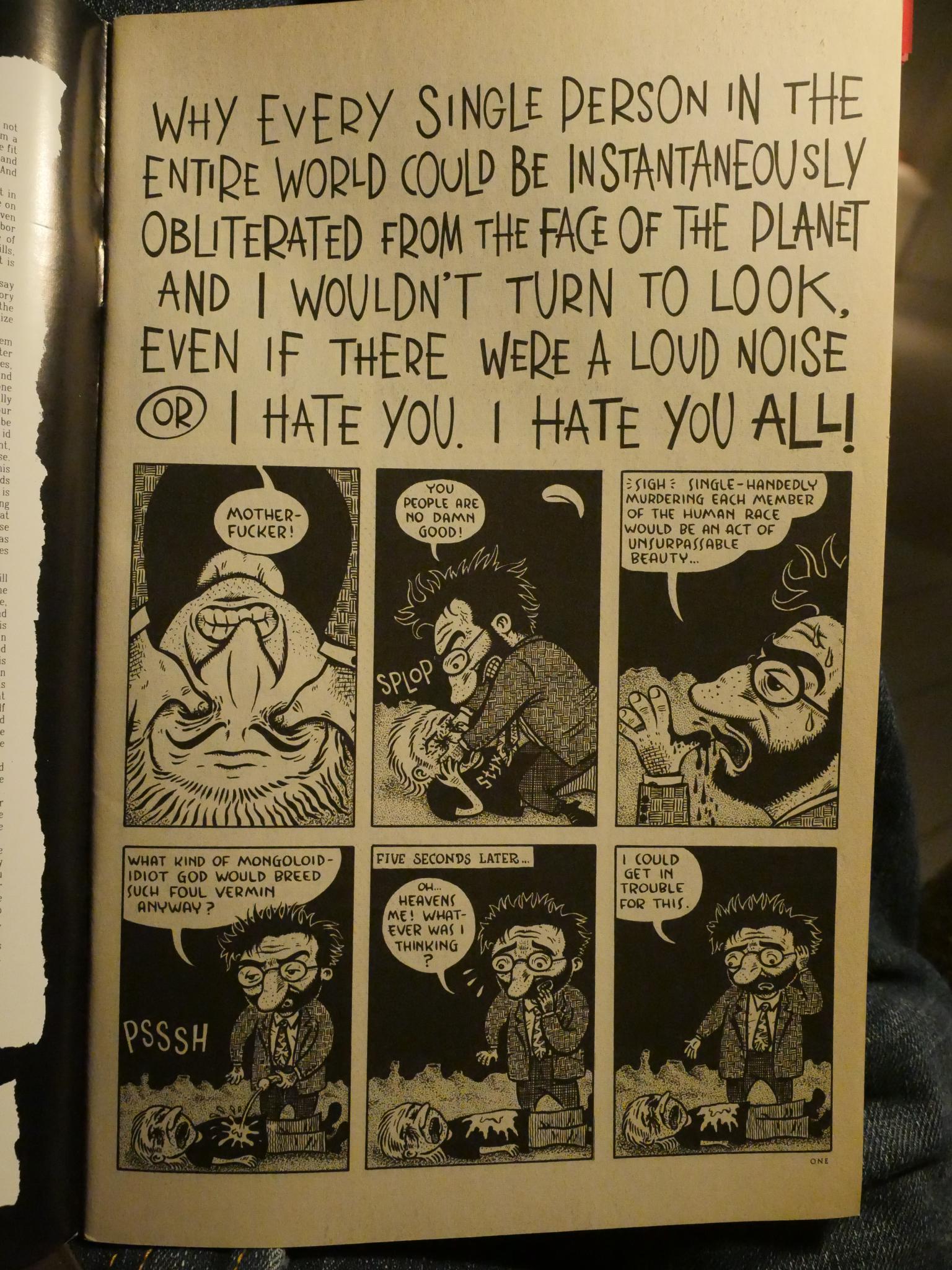 The first page of the first issue sums ups the contents of the first two issues pretty well. It’s very angry, it’s rantey, it tries to shock, but is kinda funny. And it’s quite well drawn: Brunetti draws himself pretty mercilessly, but with an expressive, almost cute line. 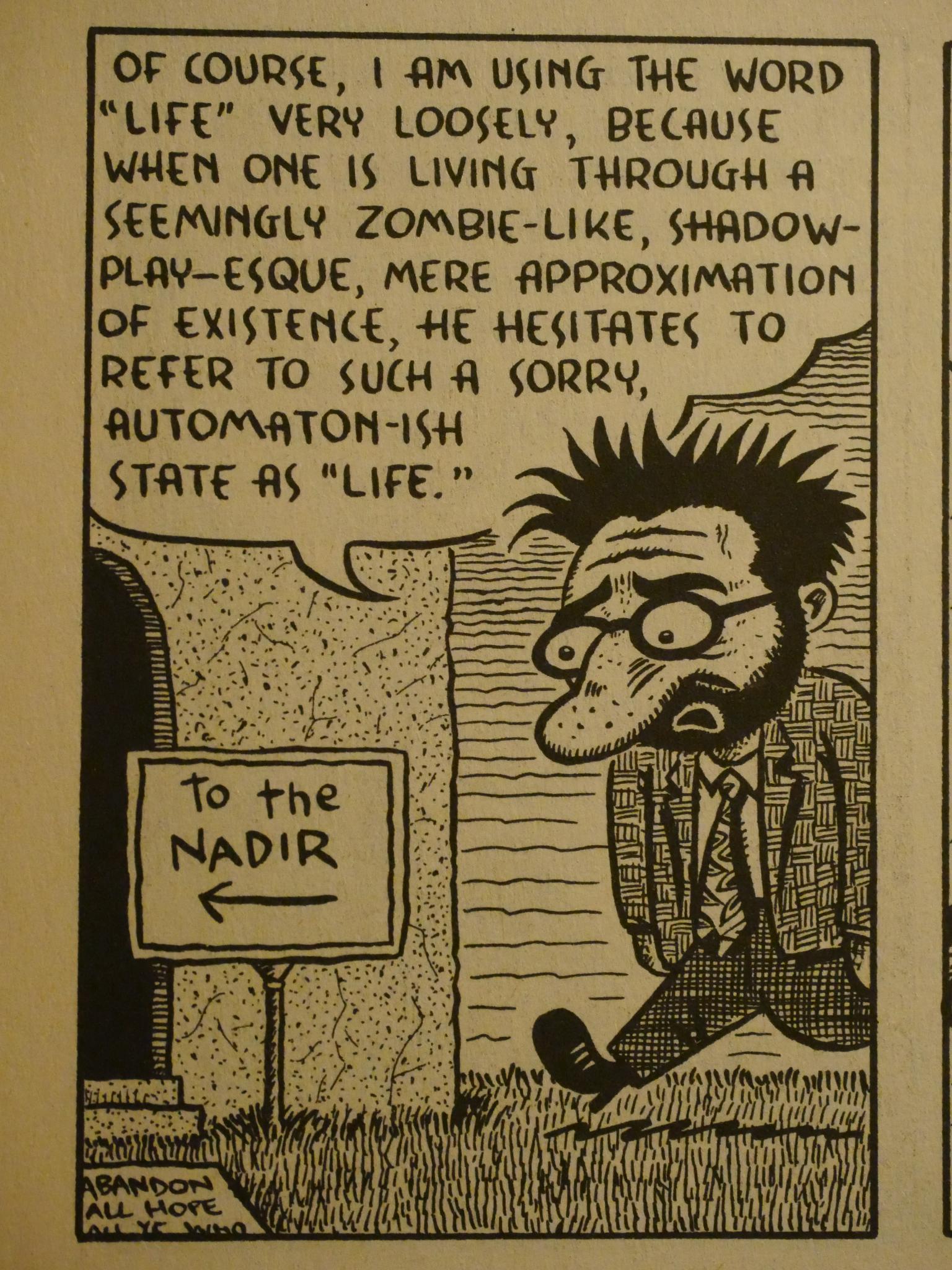 Fantagraphics has published more than their share of these philosophical/rant comics (see, for instance Dennis Worden’s Stickboy (or perhaps not)).

I generally feel that my aesthetics haven’t changed at all since I was, like, seven, but comics like this prove me wrong: Unless they’re extremely interesting and original (think John Porcellino or Ron Regé jr), I’ve got very little patience with these rants these days. 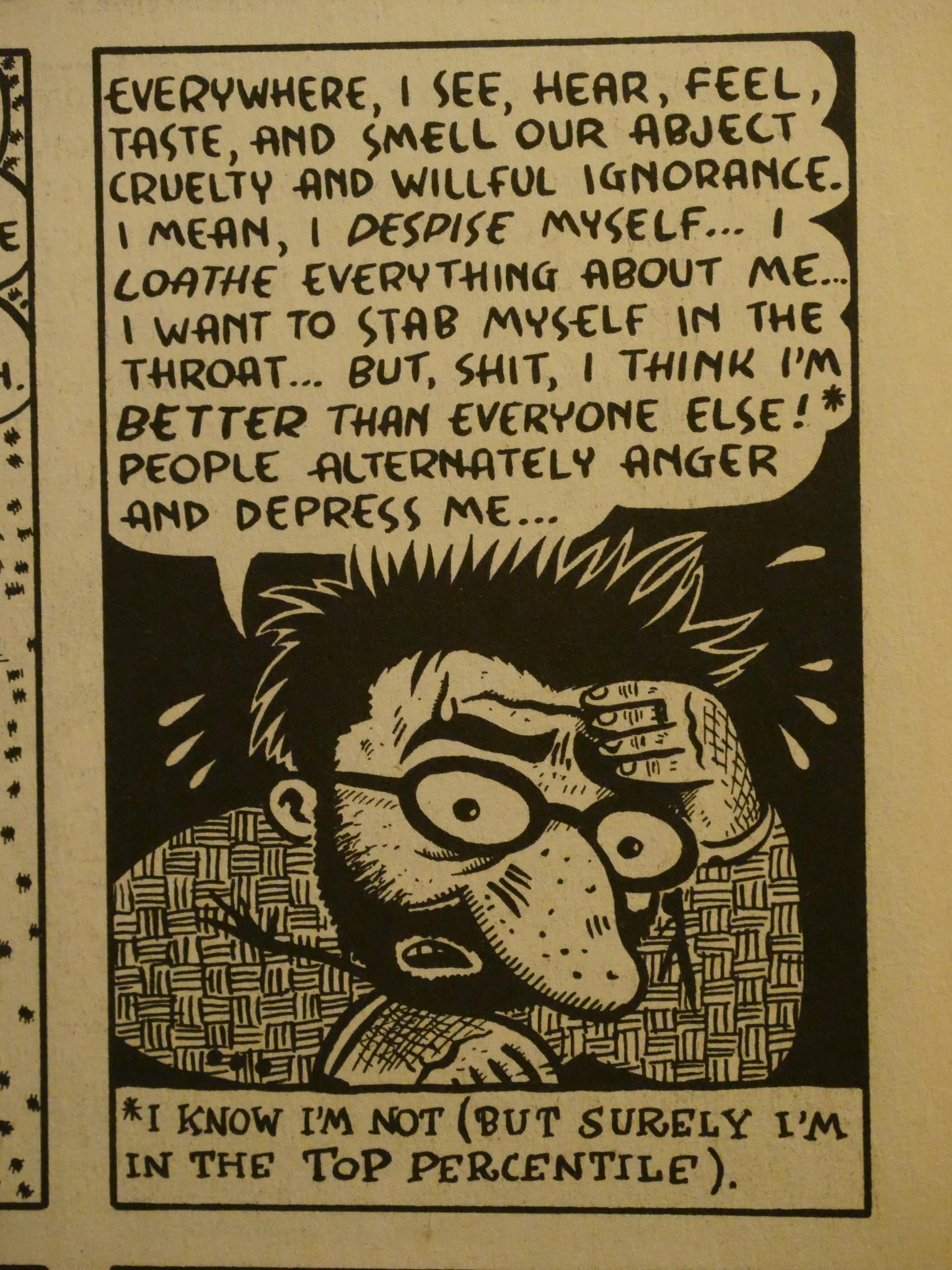 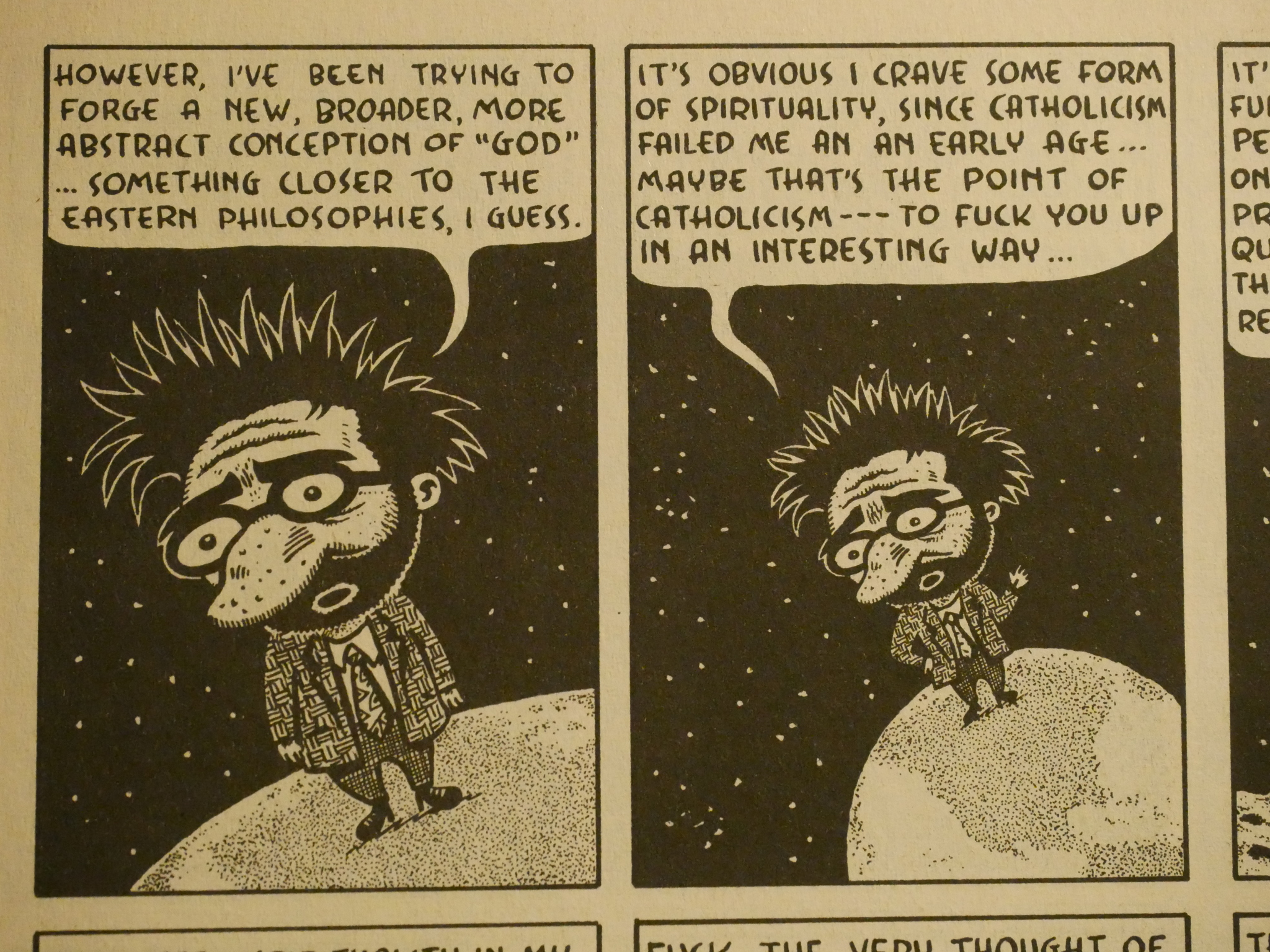 … but in the end, I find myself completely burned out on Catholic boys coming up with these deep thoughts. Sorry. It’s probably just me. 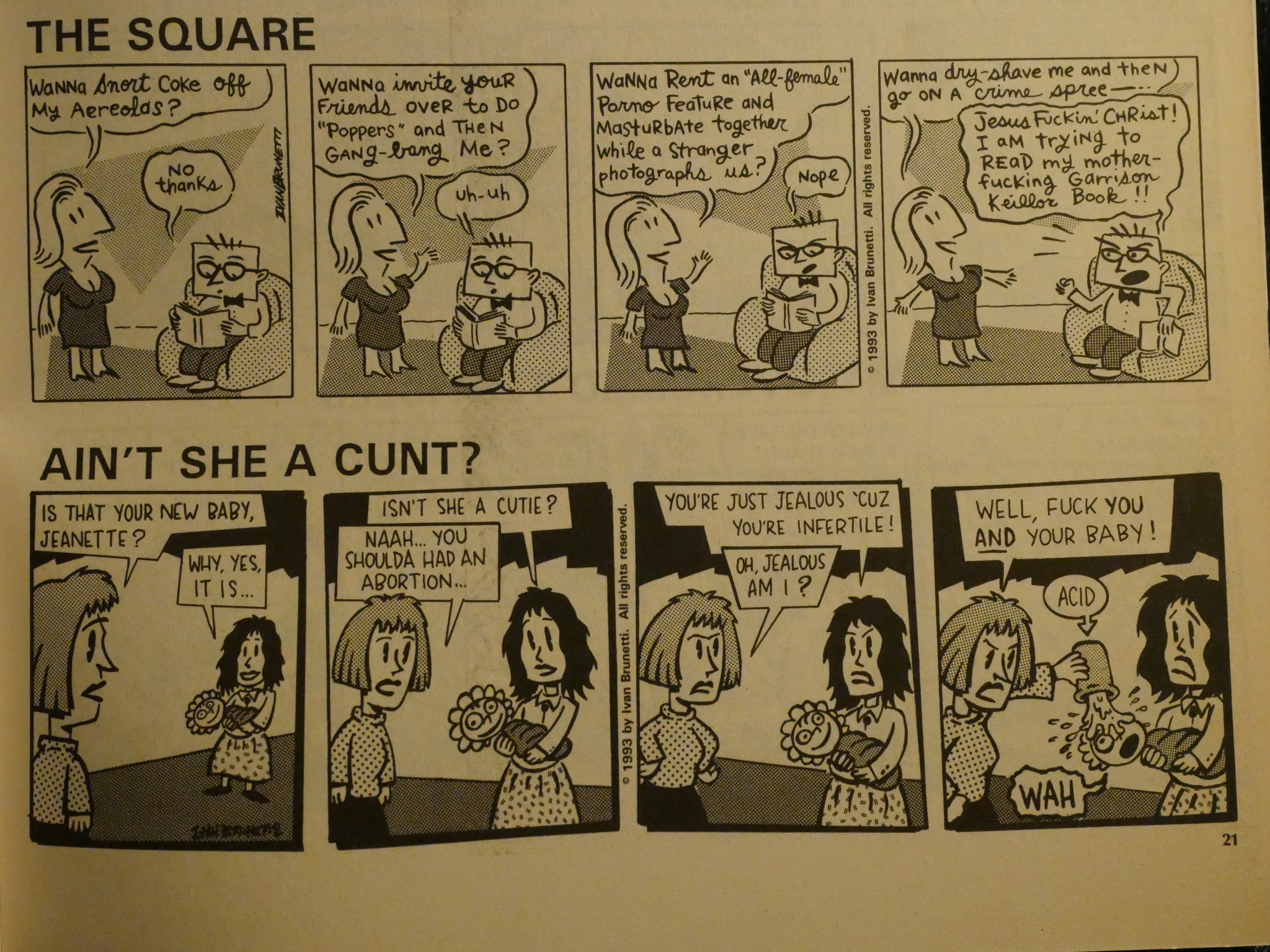 And here’s the stuff that reminds me of Johnny Ryan. I think Brunetti does it quite a bit more convincingly: It’s just more deranged and icky. 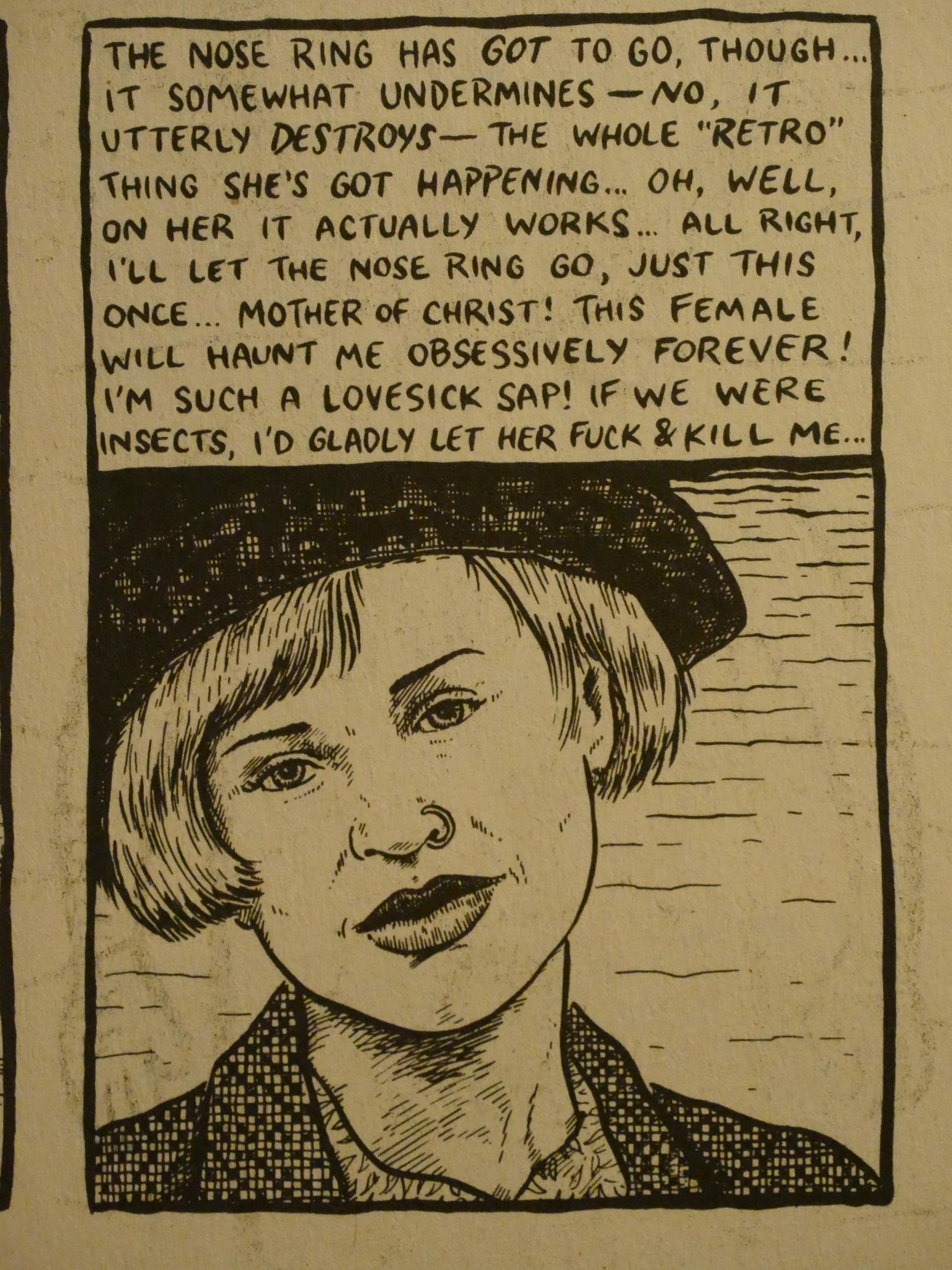 Brunetti’s art varies a lot over the first two issues, from very cartoony to something that looks traced from a photo. Perhaps another sign that they’ve been assembled from older work? 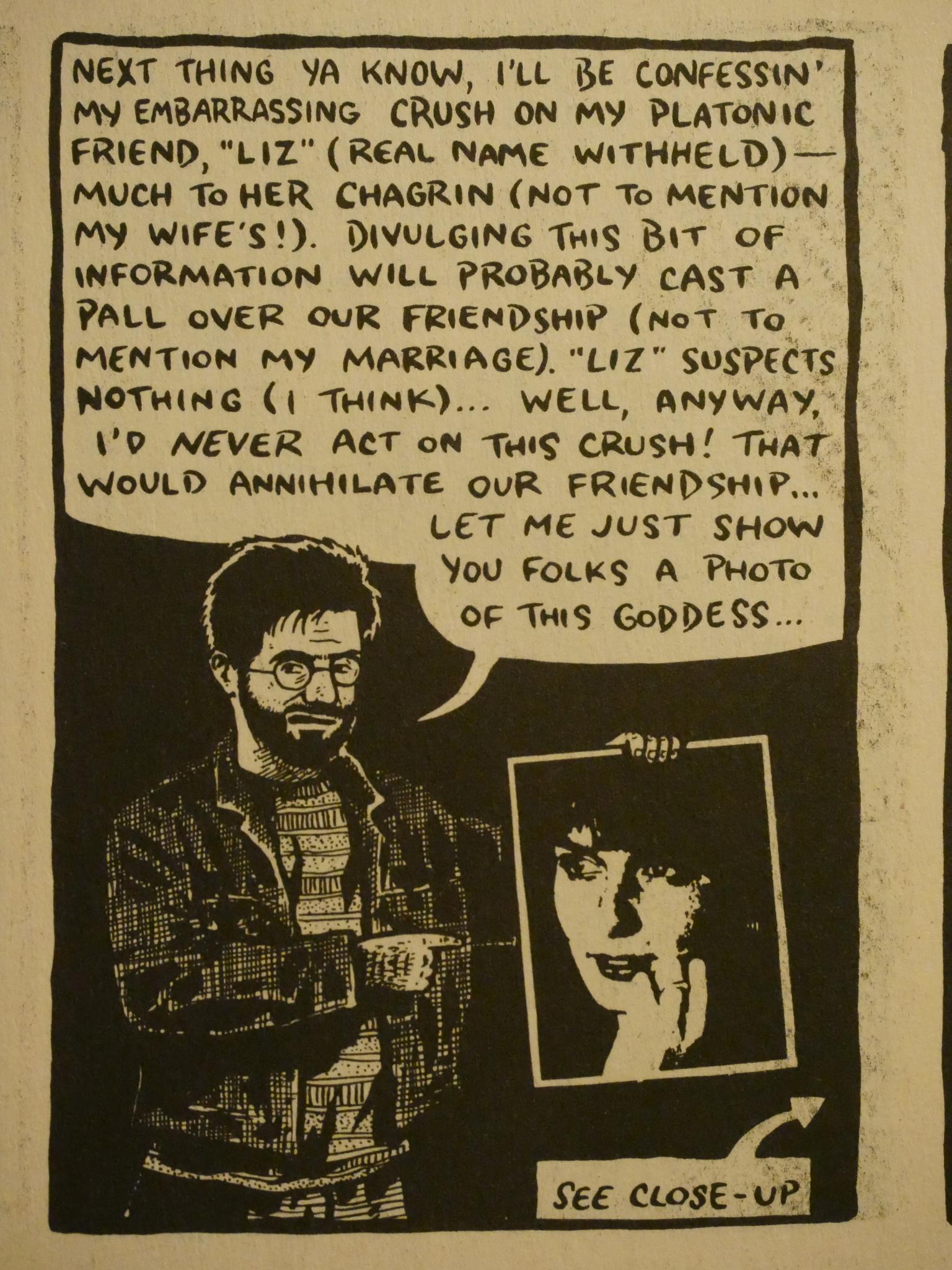 Autobiographical comic book artists have always had an uncomfortable tendency of telling us too much and thereby potentially hurting friends they’re writing about. Unsurprisingly, Brunetti tries to outdo everybody else here, too. 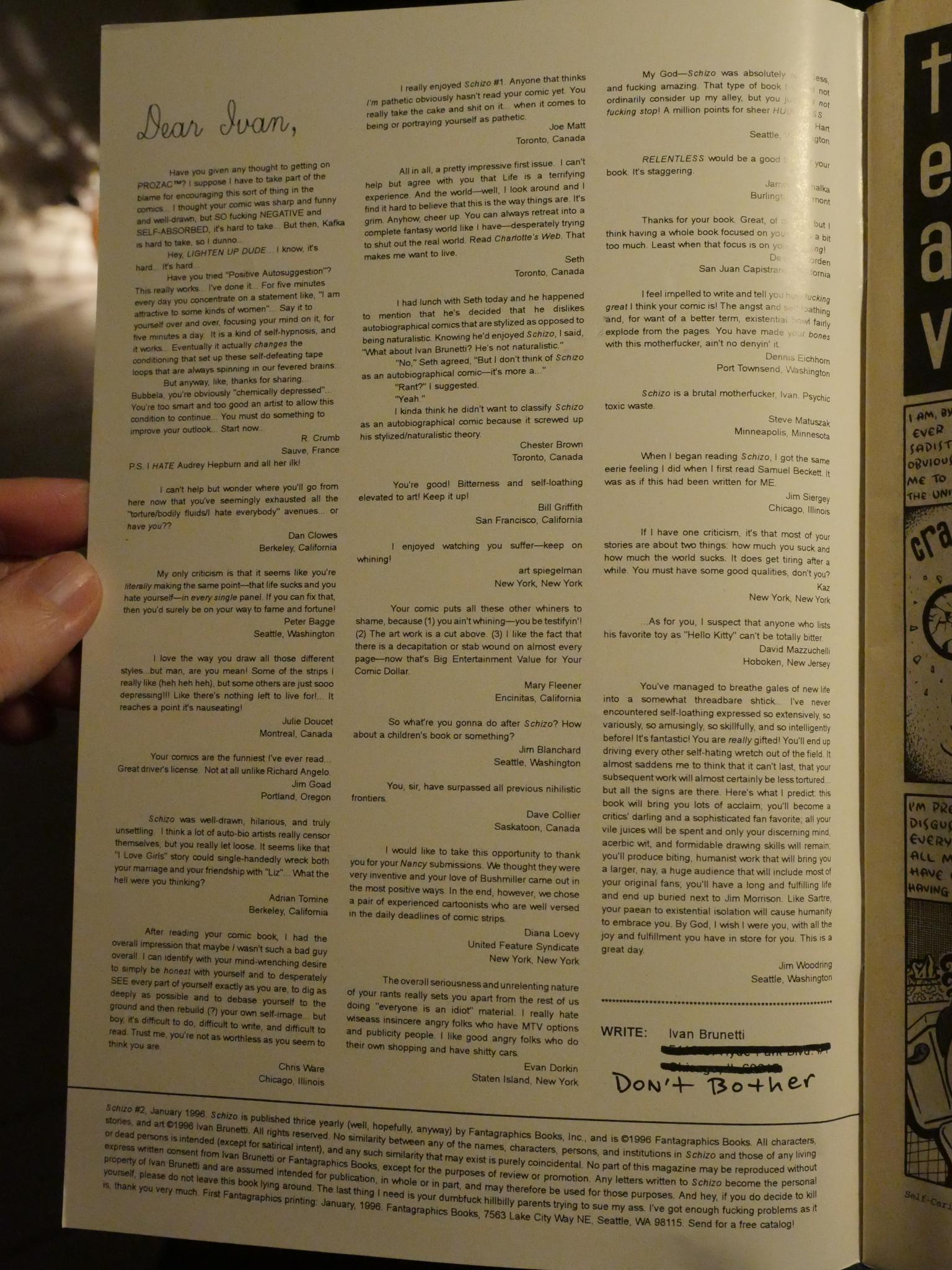 That’s a rather impressive letters page in the second issue. It’s basically everybody. I can understand they were all rather impressed with the first issue (it’s impressively unnerving), but still… And then I notice that Dennis Worden’s letter starts with “Thanks for your book”. Did Brunetti (or Fantagraphics) send free copies of the first issue to everybody in comics? 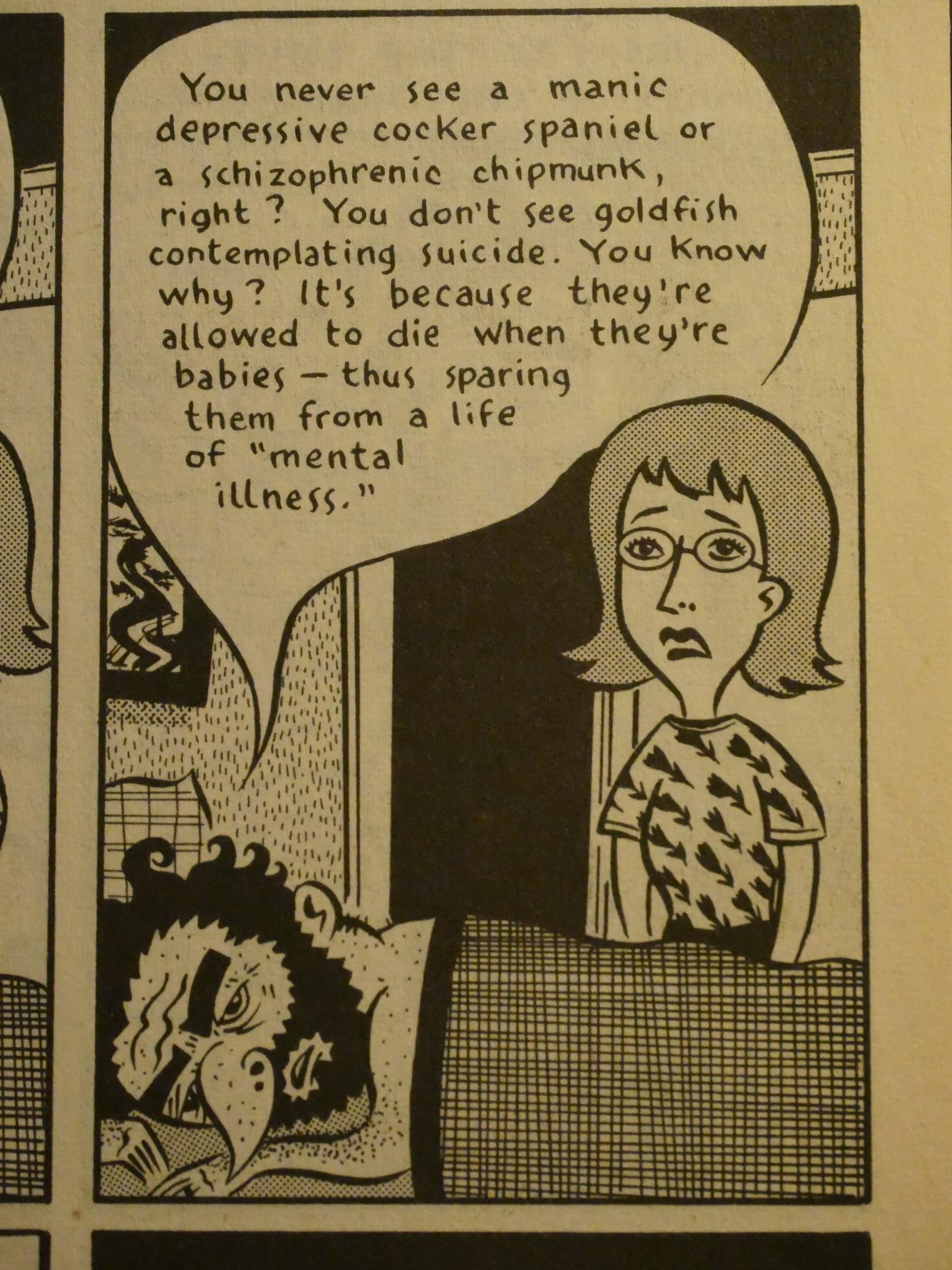 That’s how you know you’re reading something from before the public had access to the interweb. These days, the author would just google “mentally ill animals” and see that, indeed, that’s a thing. 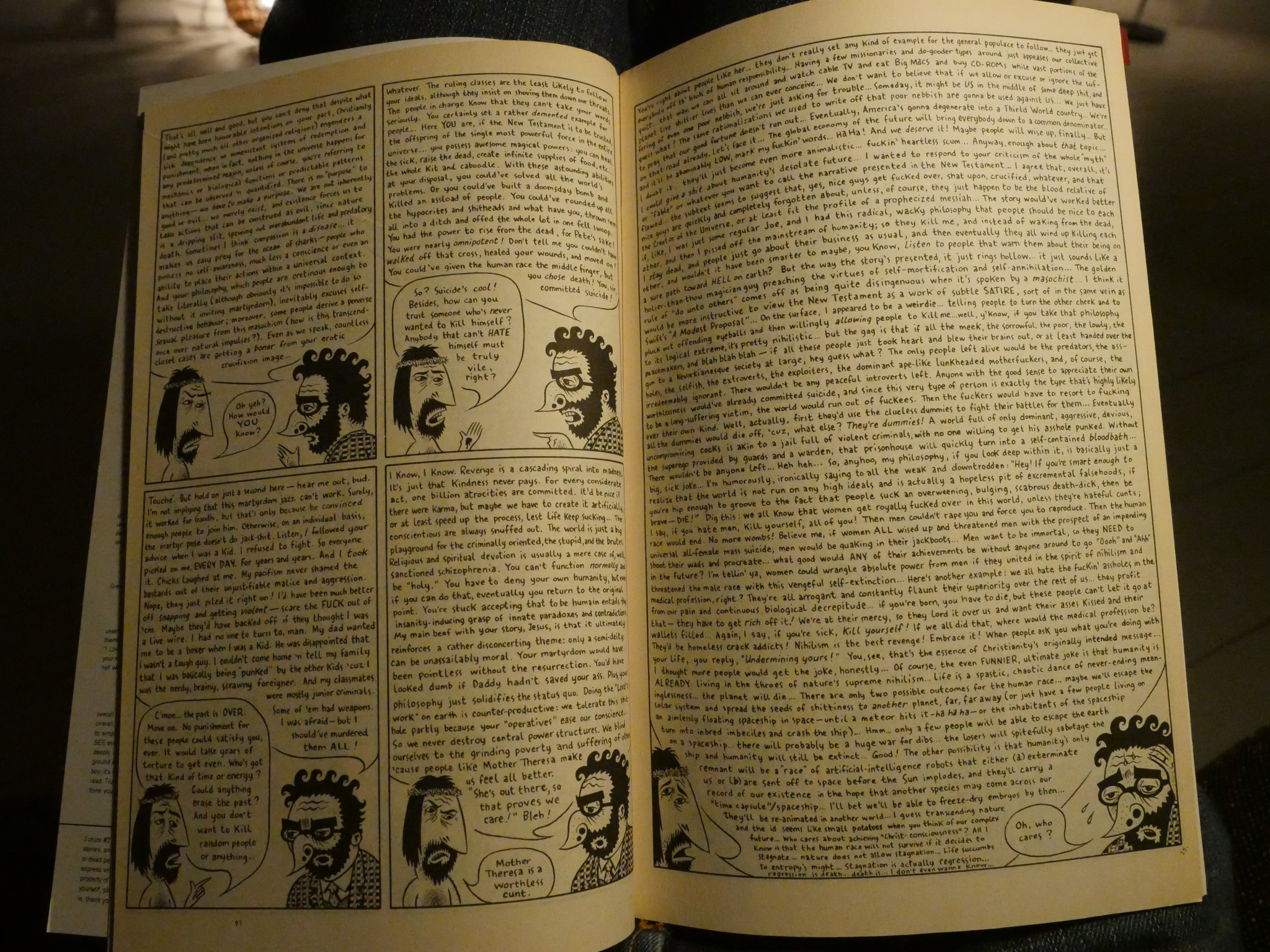 The second issue is much heavier on text than the first issue, and Brunetti veers off into talking about religion and stuff. I have negative interest in religion, so I found myself starting to skim a bit… 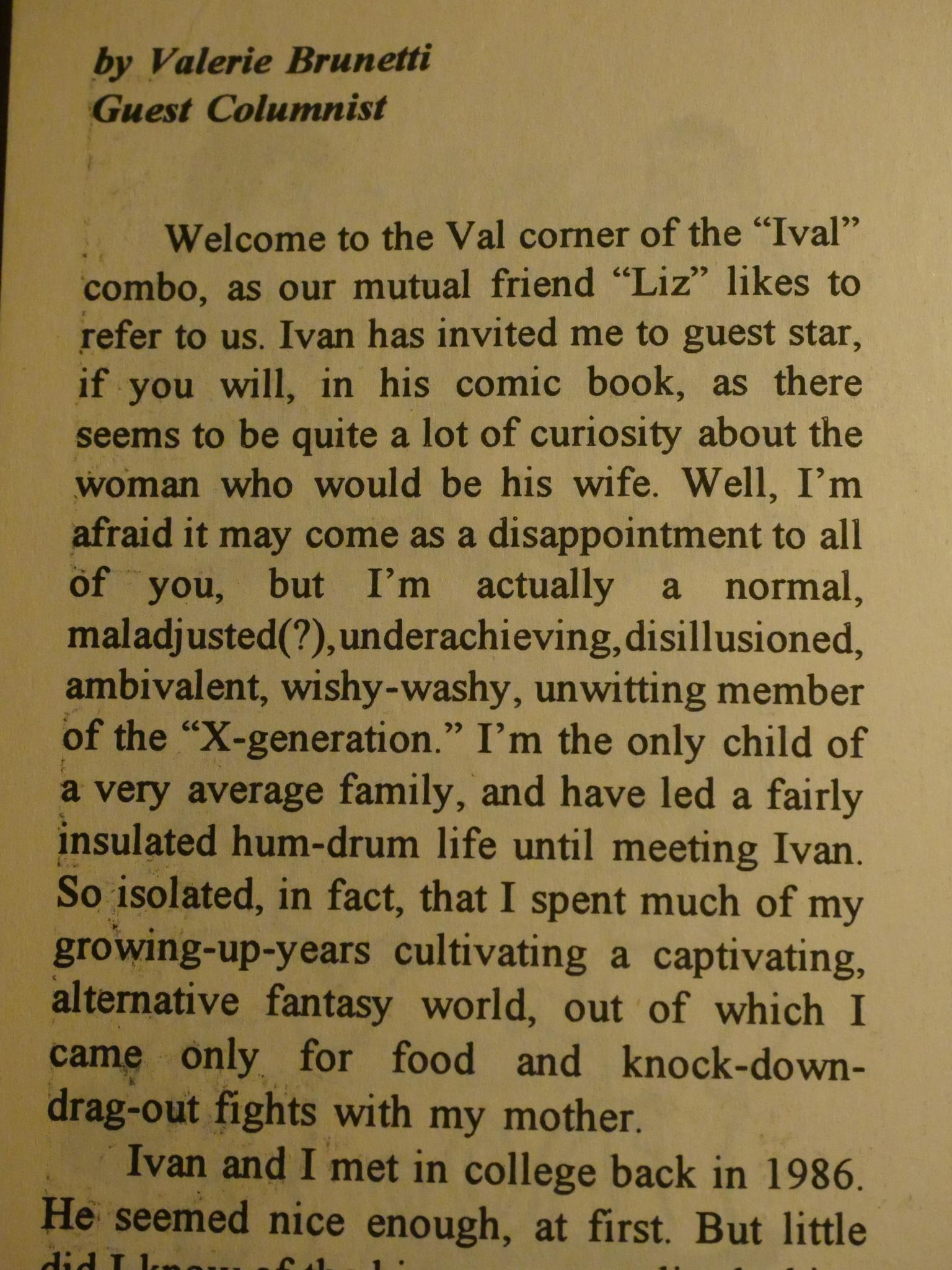 And then Valerie Brunetti (Ivan’s wife) pops up with a text, which is fair, since Brunetti talks so much about her. 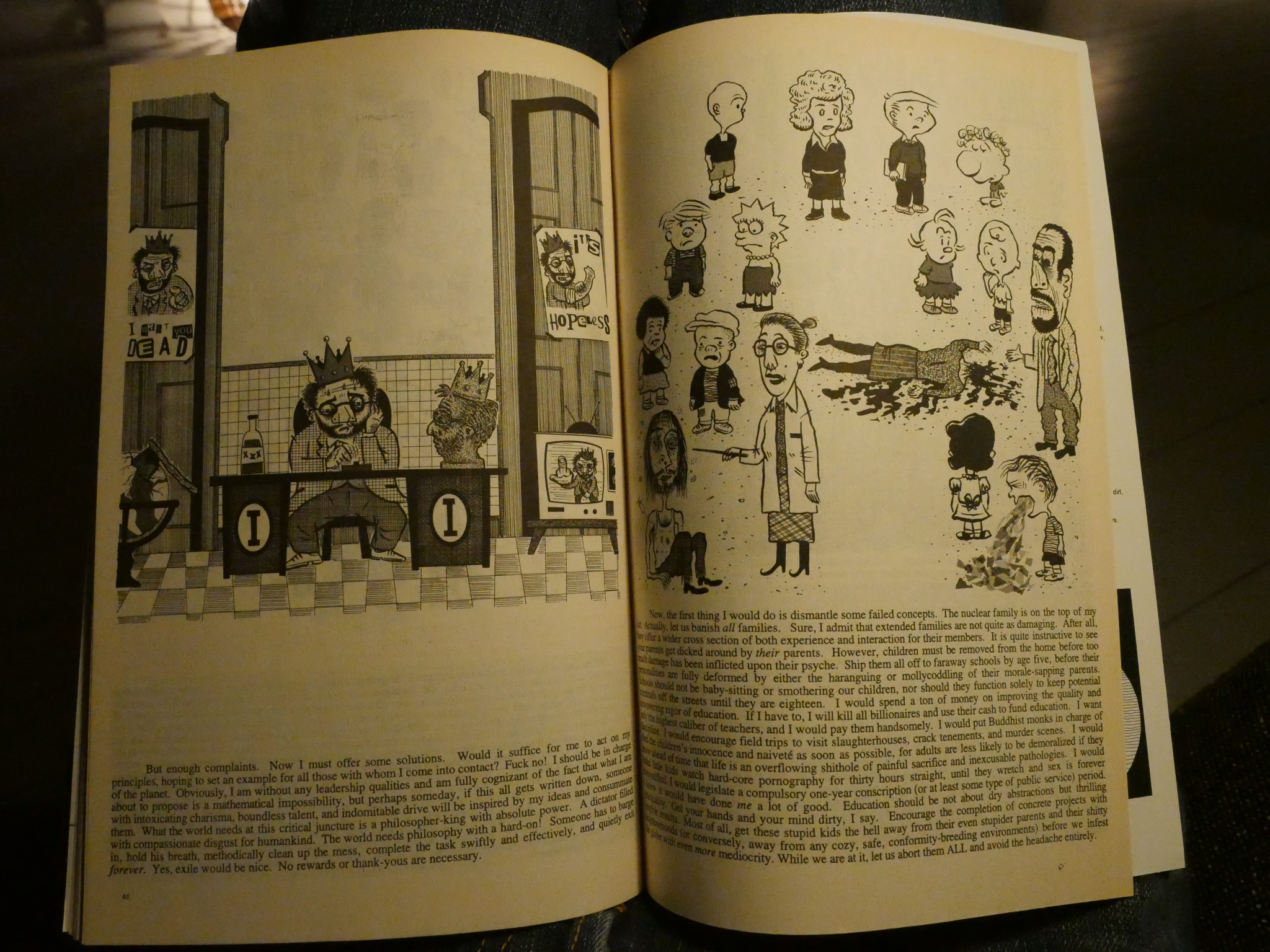 The last 20 pages of the issue are all like this, and I skipped them all. (Are those cries of “lazy Philistine” I hear? Those issues of All-New All-Uncanny X-Men aren’t going to read themselves, you know!) Then I noticed that the drawings seemed to be forming letters, one per page. That’s “U” and “A”. The pages all together spell

FUCK ALL OF YOU ASSHOLES 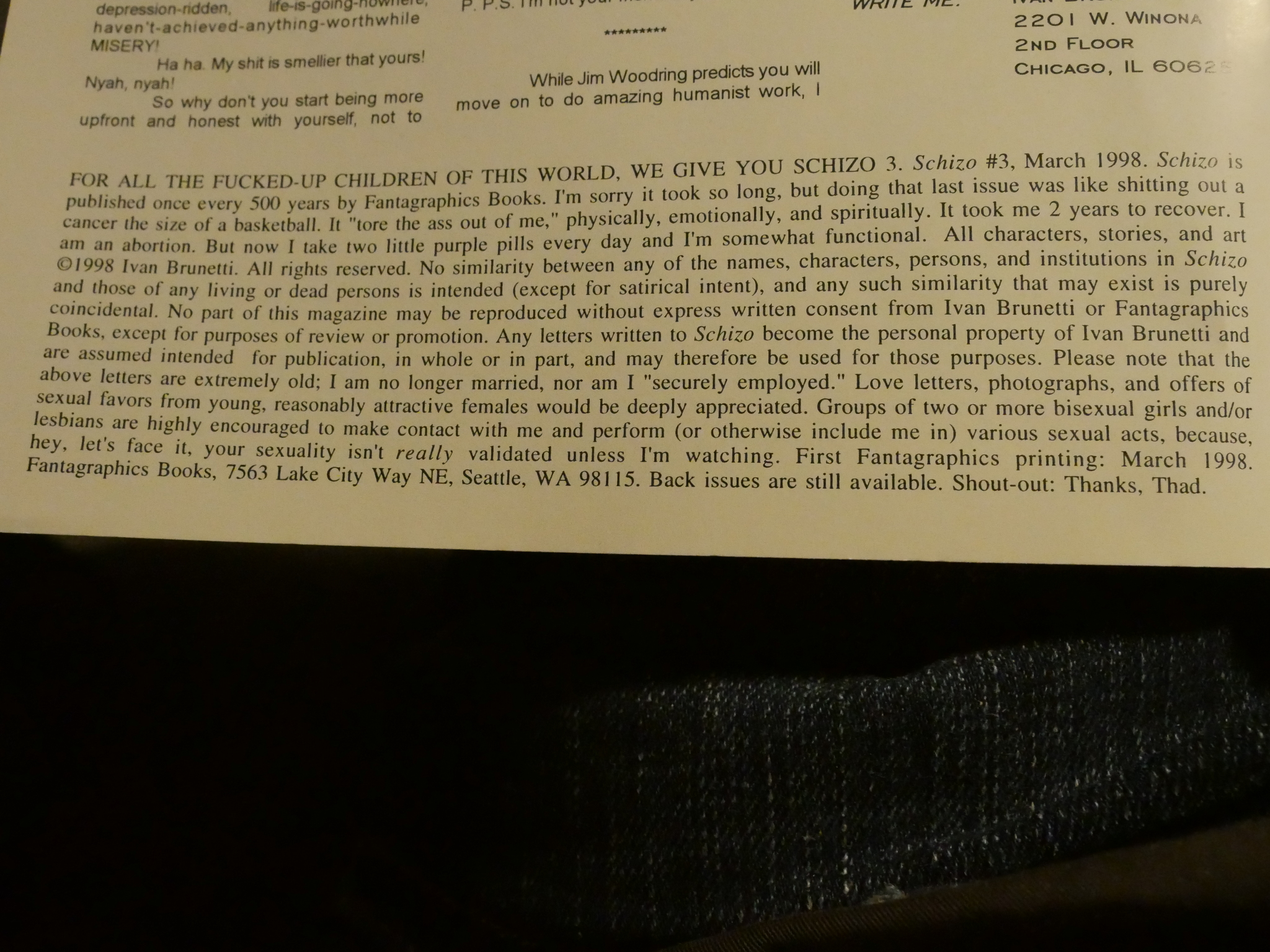 The third issue was published two years later. Brunetti says in the indicia that it took him that long to recover from doing the previous issue, which is understandable. 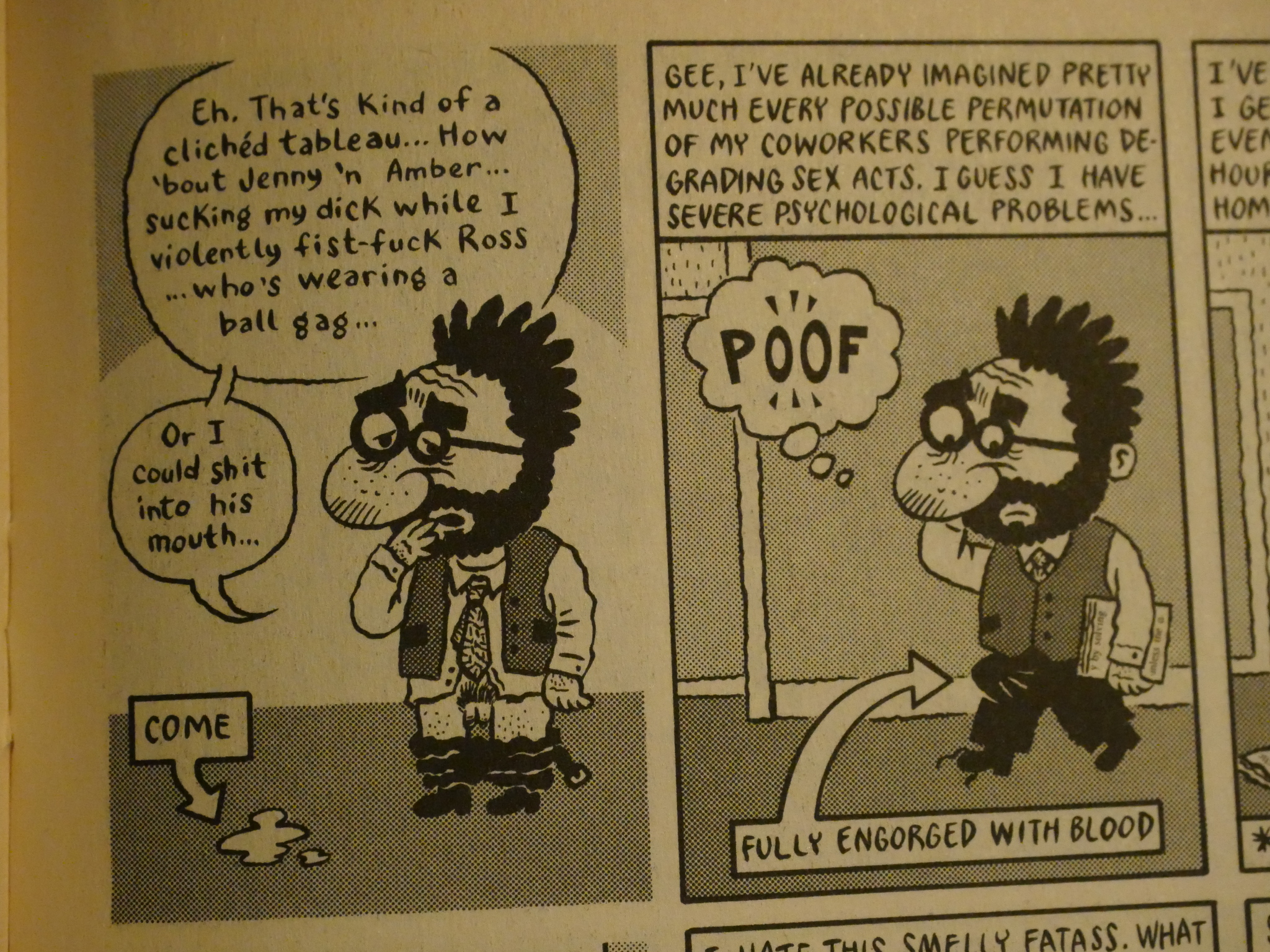 The third issue is very different. It has half the number of pages of the preceding issues, and it’s not as text heavy. Most of it takes place at Brunetti’s place of work, and, as you can see, it’s just like Dilbert.

Except that’s it’s rather good. 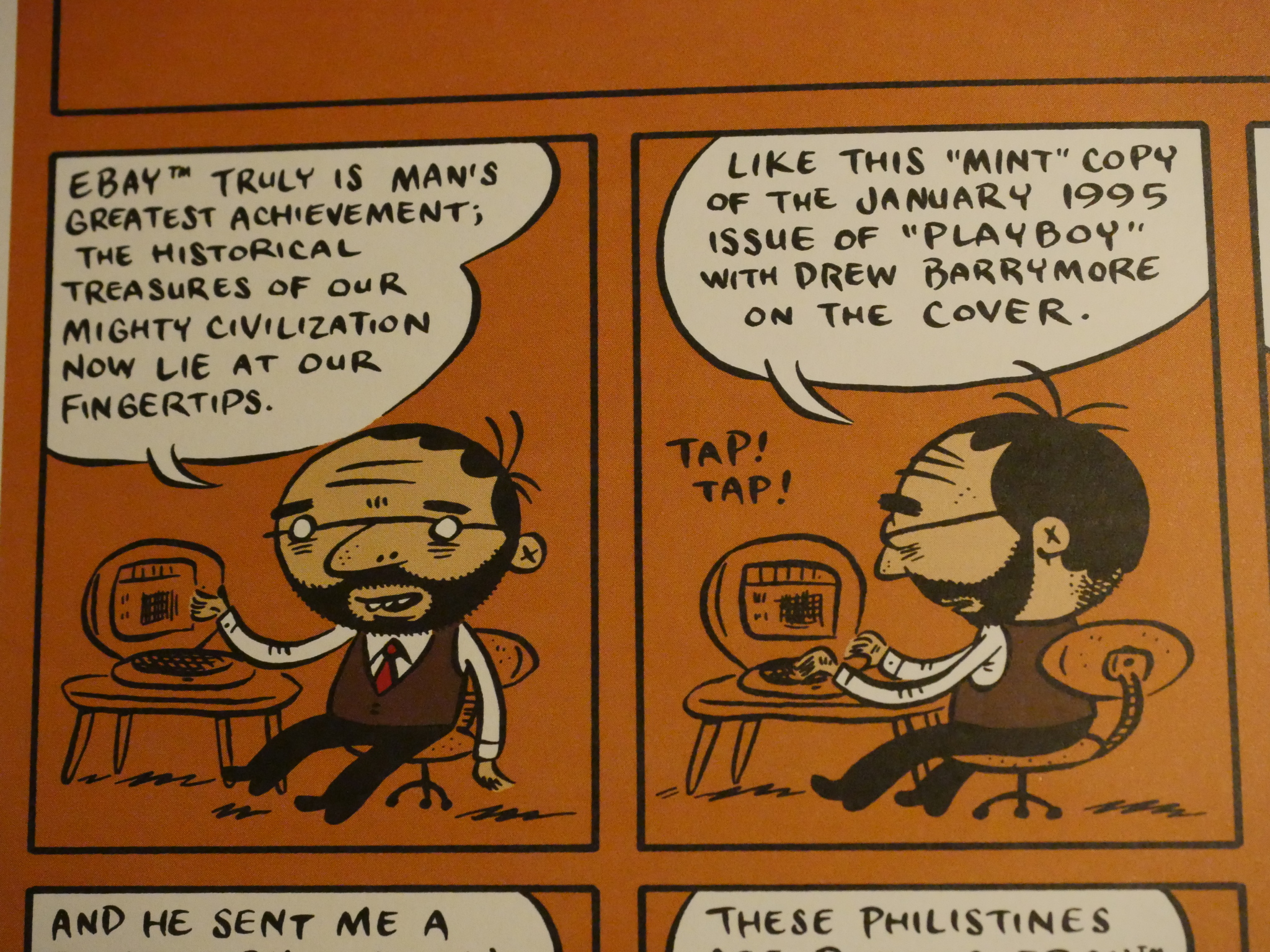 The fourth and final issue was published eight years after the third, and is almost tabloid size and printed on stiff, white paper. Brunetti’s art style has changed again, and is now radically simpler and more old-timey. 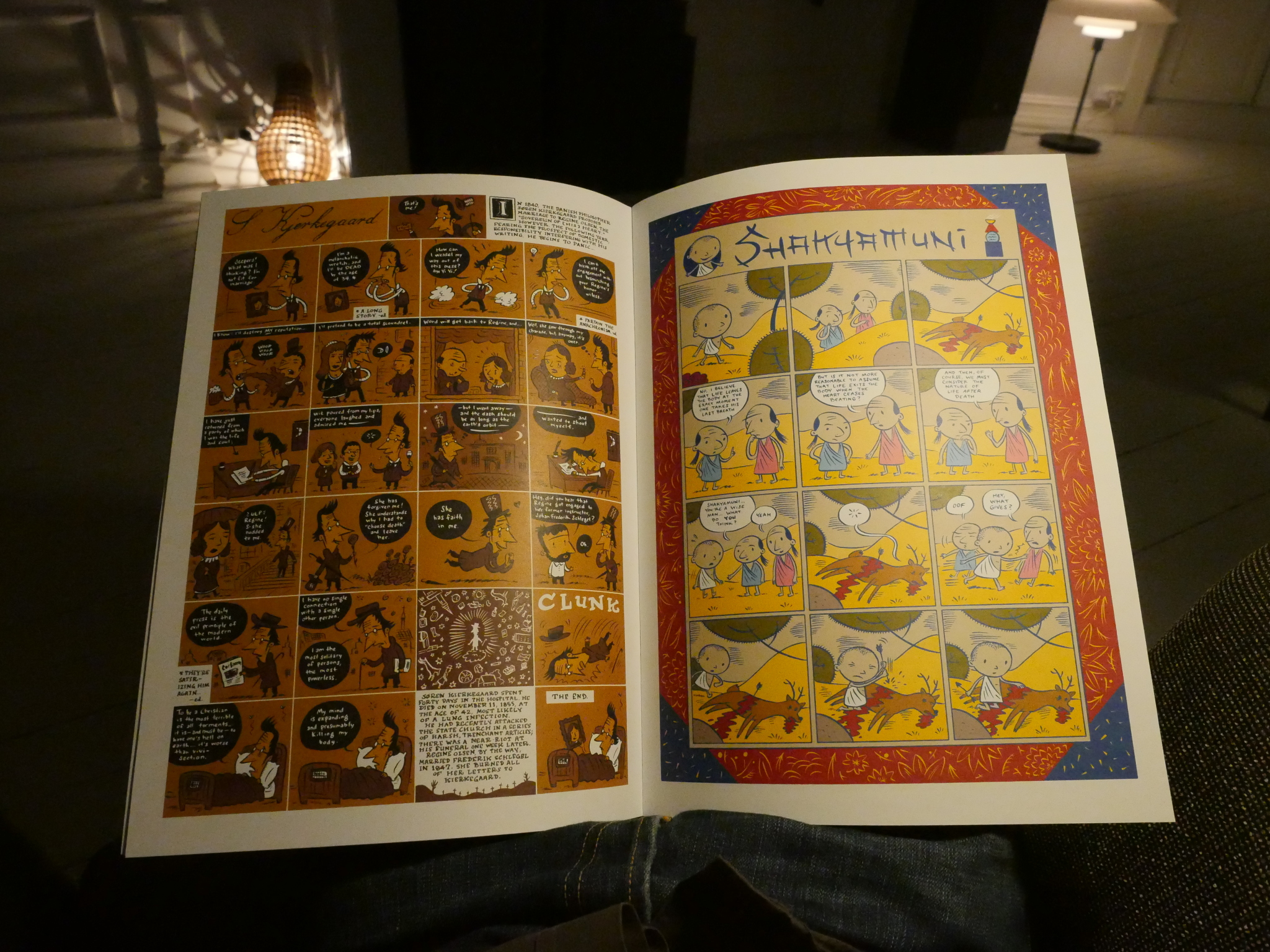 About half the pages aren’t autobiographical at all, but are instead mini-biographies of various writers and artists. It’s an interesting and eclectic mixture of people he’s decided to write about. 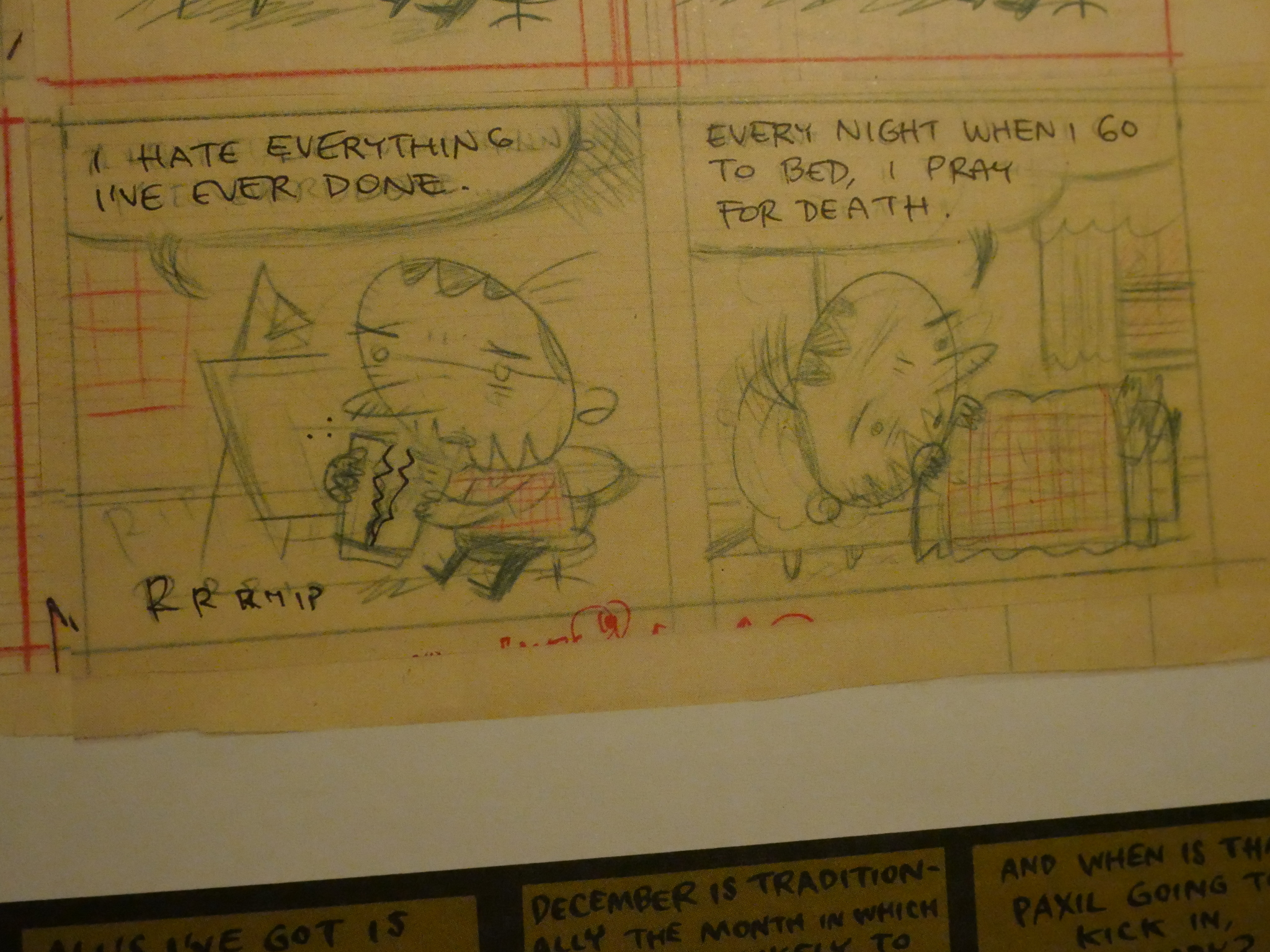 But, of course, there’s still room for some old-fashioned self-loathing. 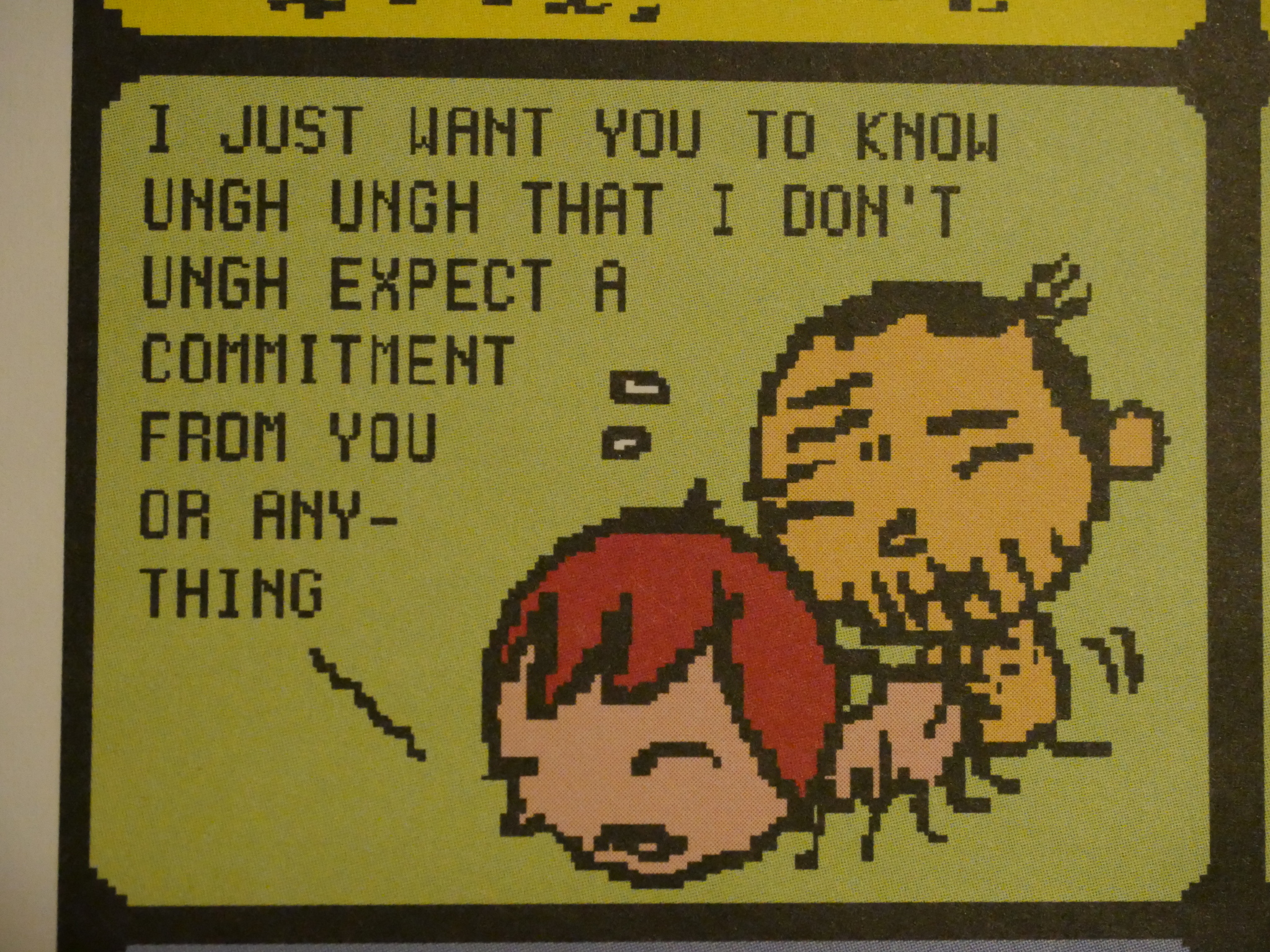 Brunetti’s artistic experimentation leads to one page of comics done on the computer in a very low rez style. 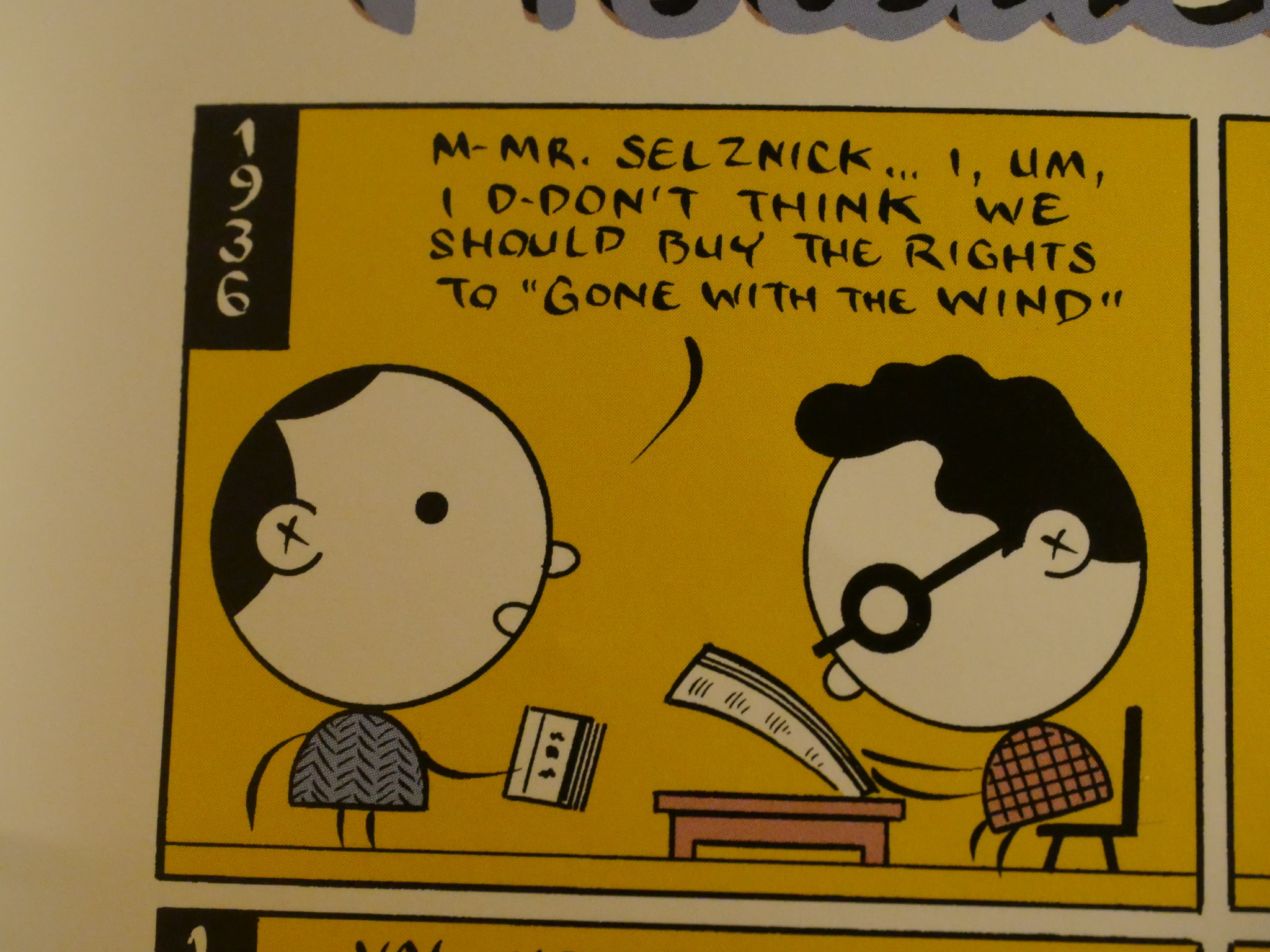 But this style is the pervasive one, and is very similar to the one Chris Ware has been using in his most recent work. Was Ware inspired by Brunetti or the other way around? If I can trust publication dates, this geometric style may have originated with Brunetti…

The first three issues of Schizo were published in a collected edition by Fantagraphics in 2007 under the name Misery Loves Comedy. Brunetti continues to work in comics and illustration (most famously doing several covers for The New Yorker). His next book is a children’s book from TOON called Wordplay.