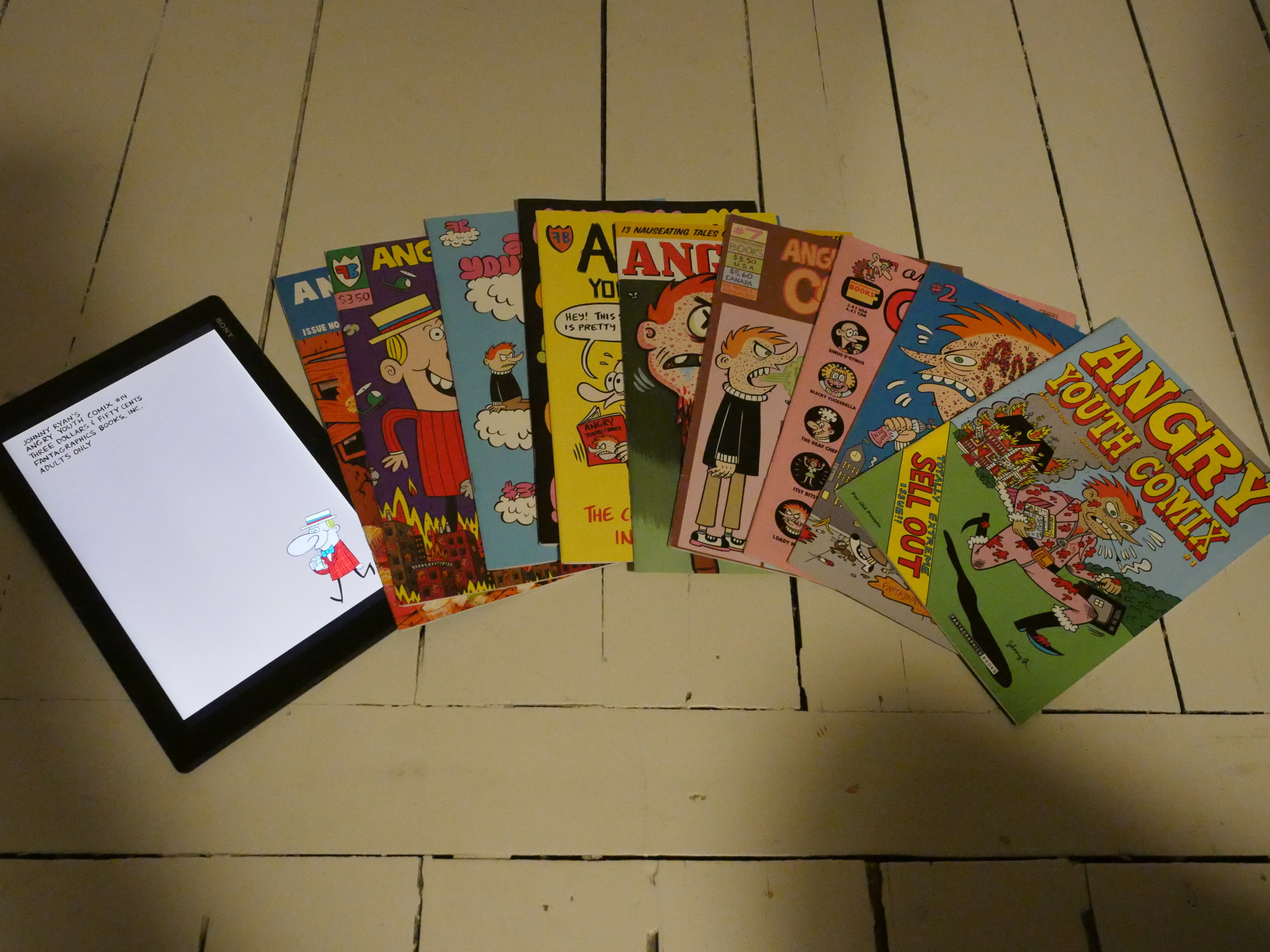 I guess Ryan works in the gross-out humour comics tradition exemplified by people like Sam Henderson, but he’s most similar to Ivan Brunetti in his most deranged moods. Or perhaps there’s a Mike Diana influence going on here, although I think Ryan probably doesn’t really mean it the same way Diana (or Brunetti) does. 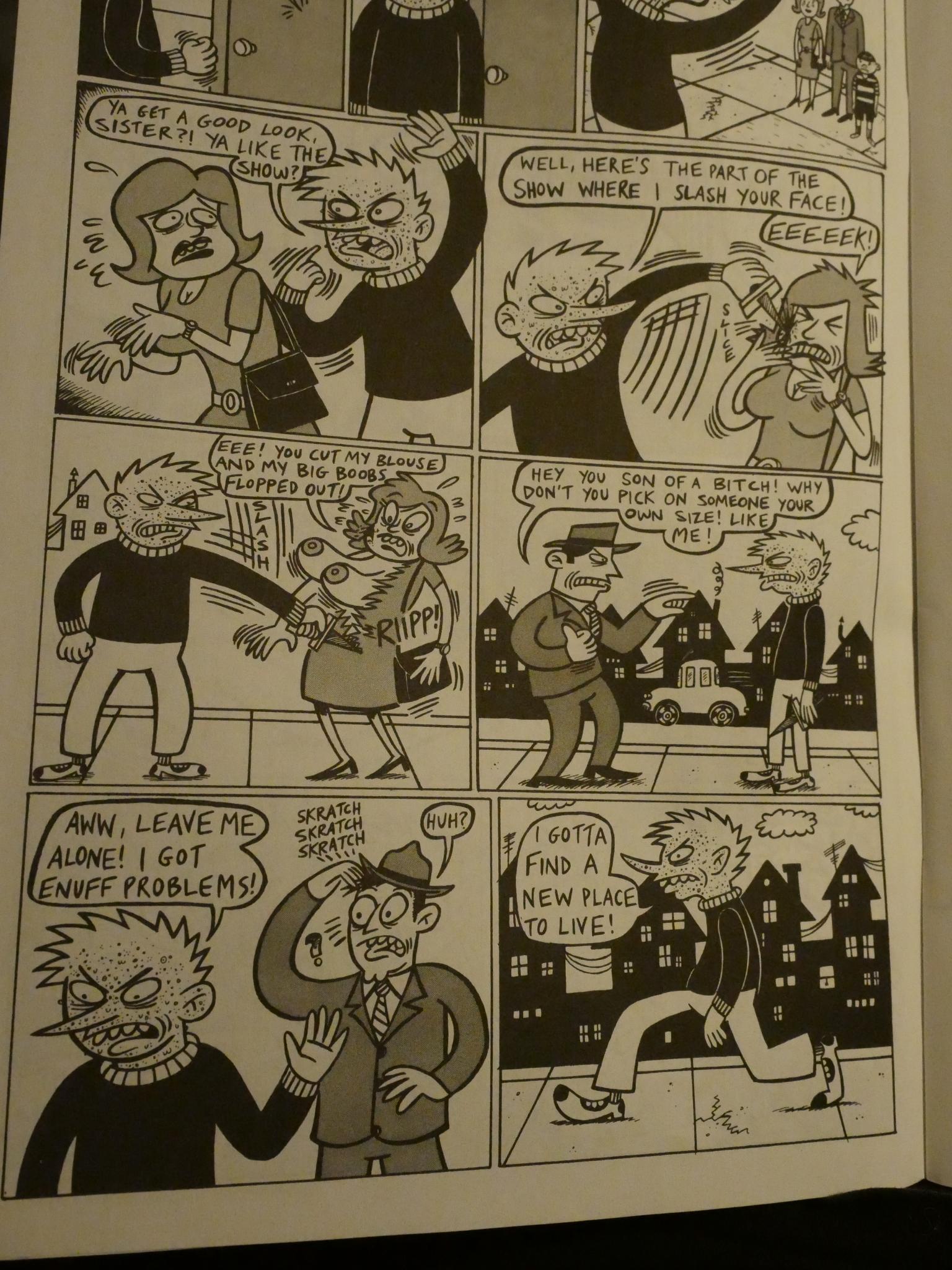 So we have a lot of outrageous violence (and sex), and plotlines that usually aren’t very… developed. 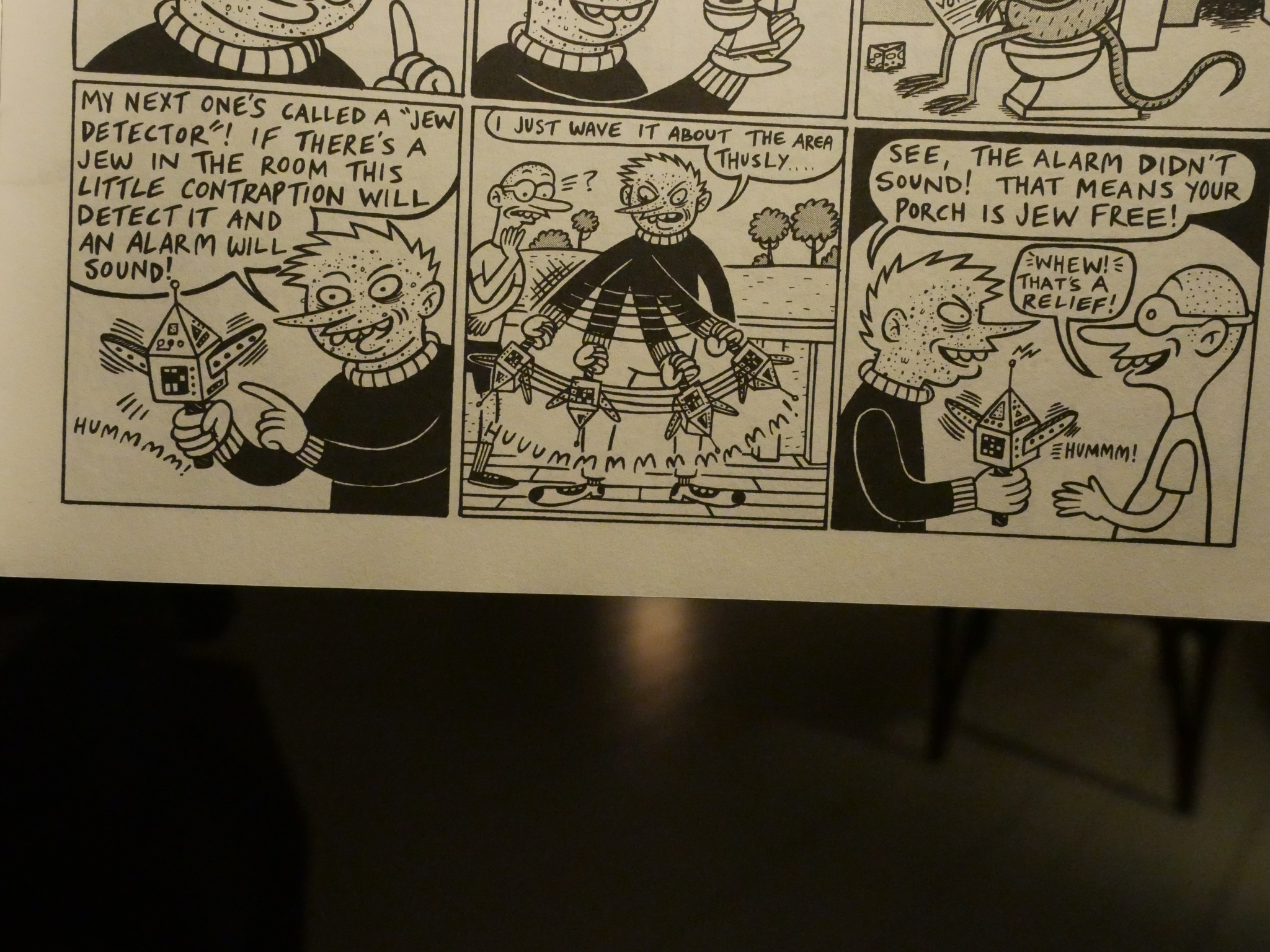 Ryan works hard at trying to be as offensive as possible, but it’s the kind where you can just picture him tittering behind the drawing board, so it’s neither that shocking or that funny. In my opinion. 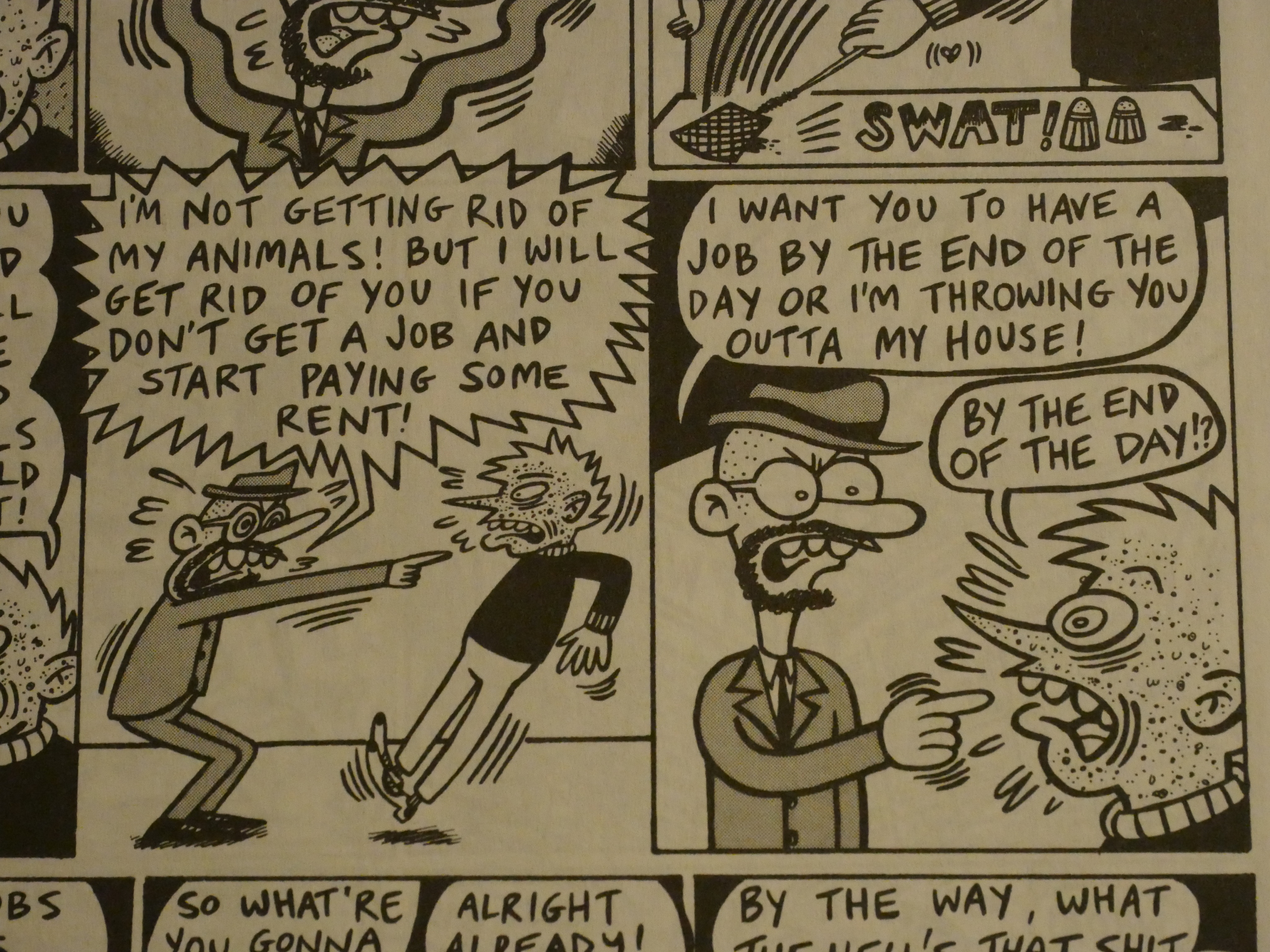 In the early issues Ryan has some stories that have semi-coherent plots (like this one where Loady must get a job, so he transforms Sinus’s pets into mutant hookers (yes, that’s a semi-coherent plot)). There’s almost a sitcom like pacing to these stories. And then there’s the one-line gags, which mostly consists of some gross absurdity. I think the point may be to be really unfunny, and then that makes it funny? It’s OK. 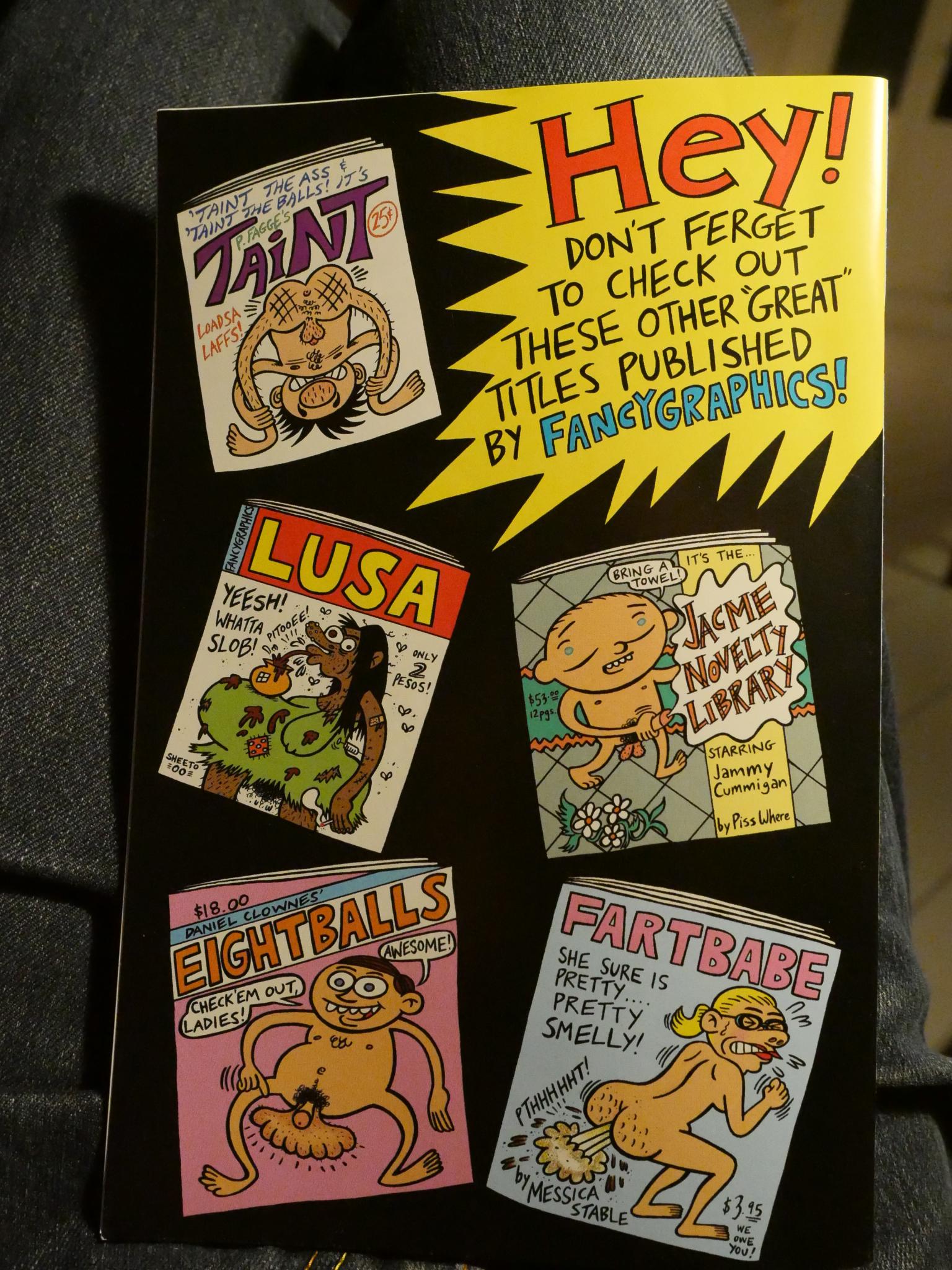 The most frequent target for Ryan’s fake ire is other cartoonists: I think there’s like five or six pieces in this run about how awful serious comics are. Which is fair. 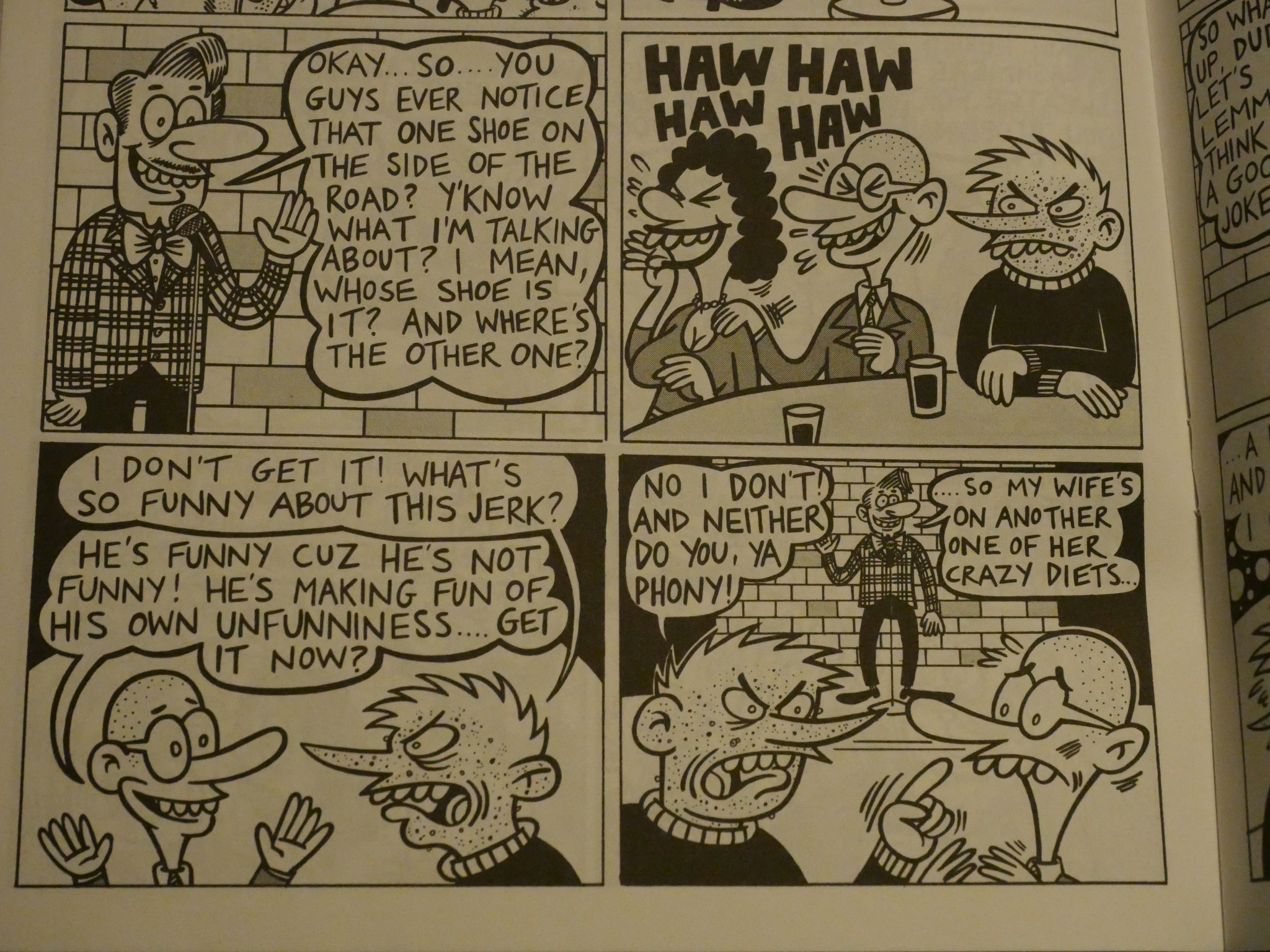 I can really get behind Ryan’s hatred of stand-up comics. Or perhaps it’s just Loady’s. 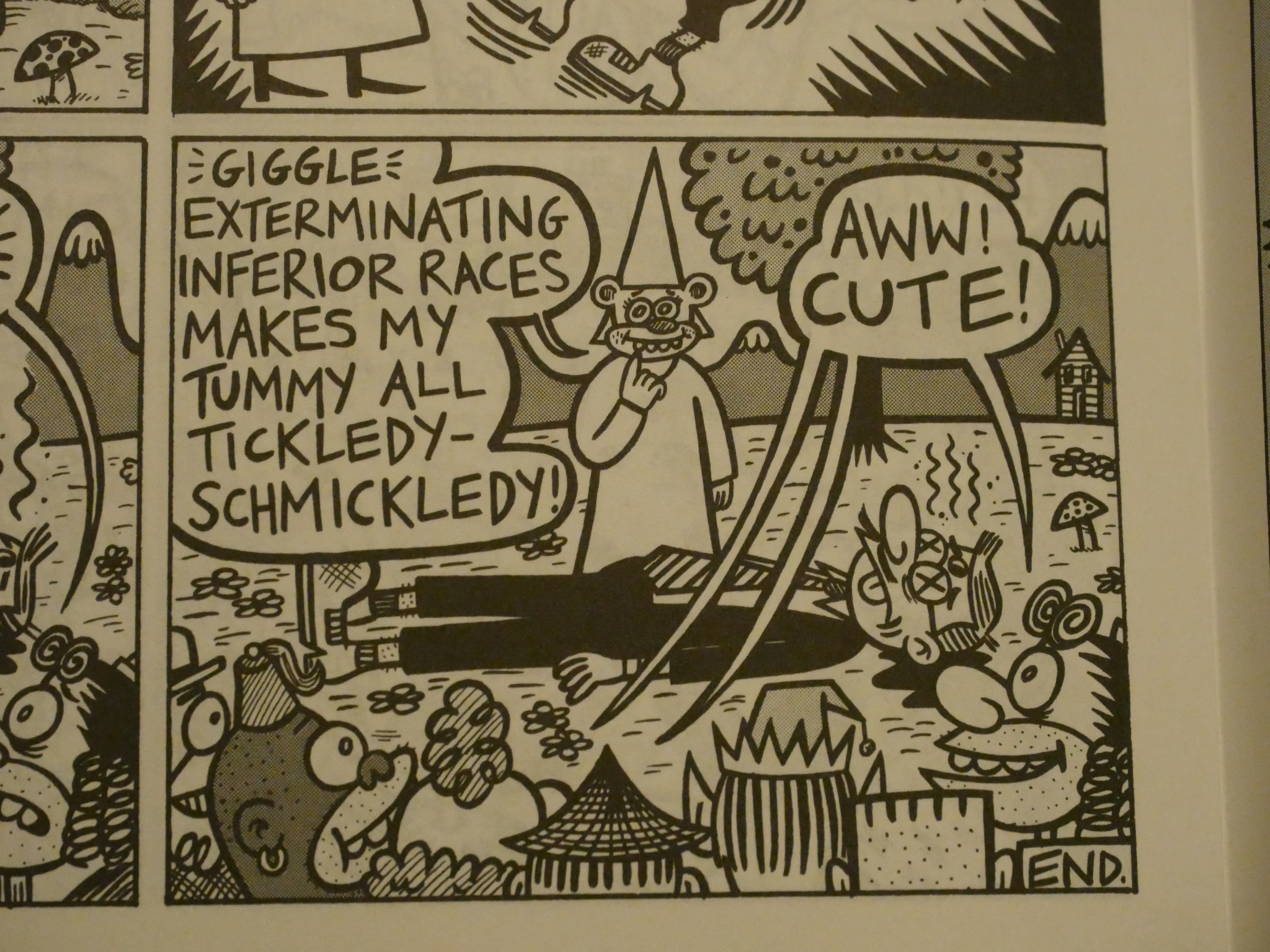 Next after other comics, the most frequently recurring subject is racism. 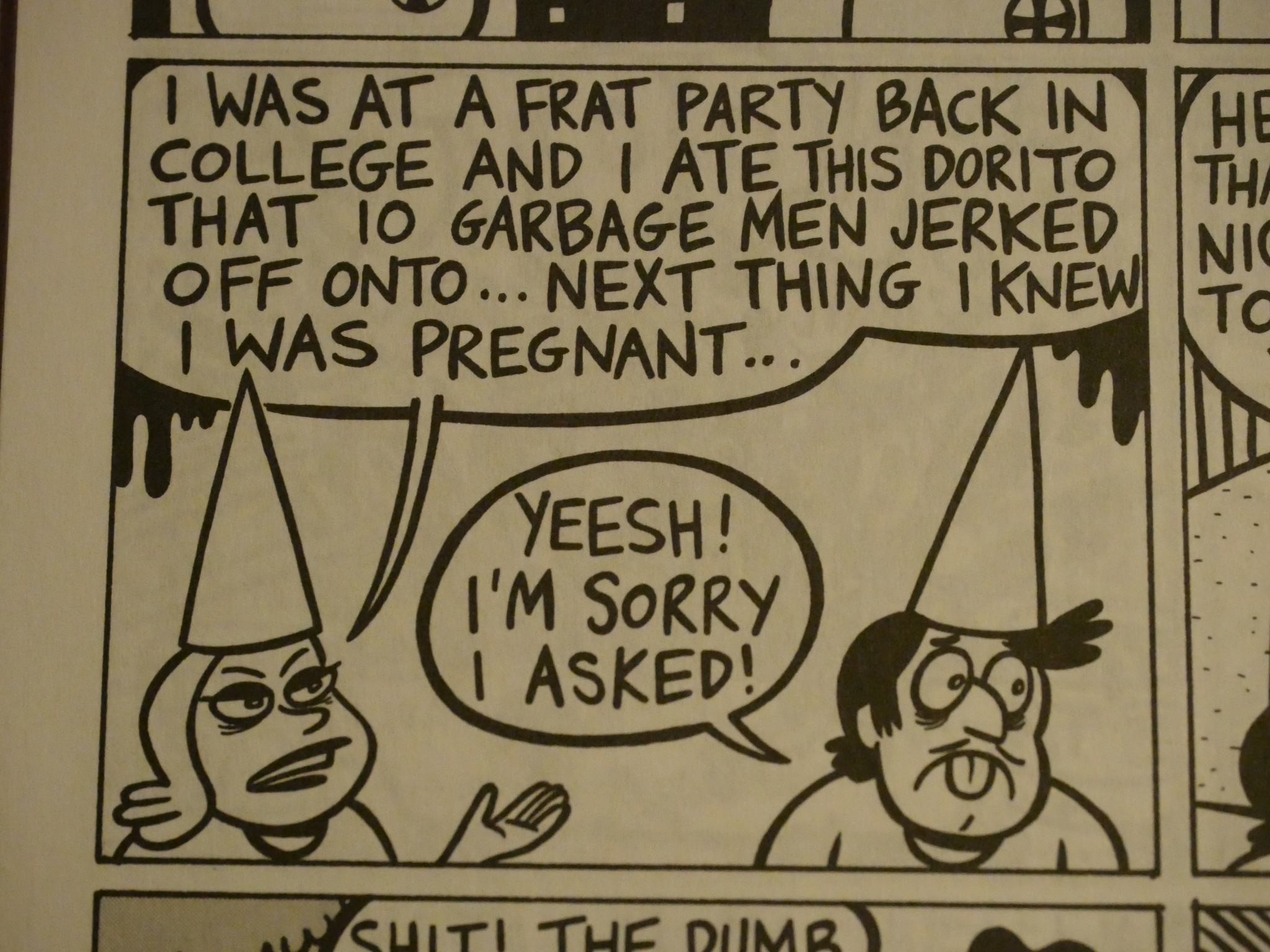 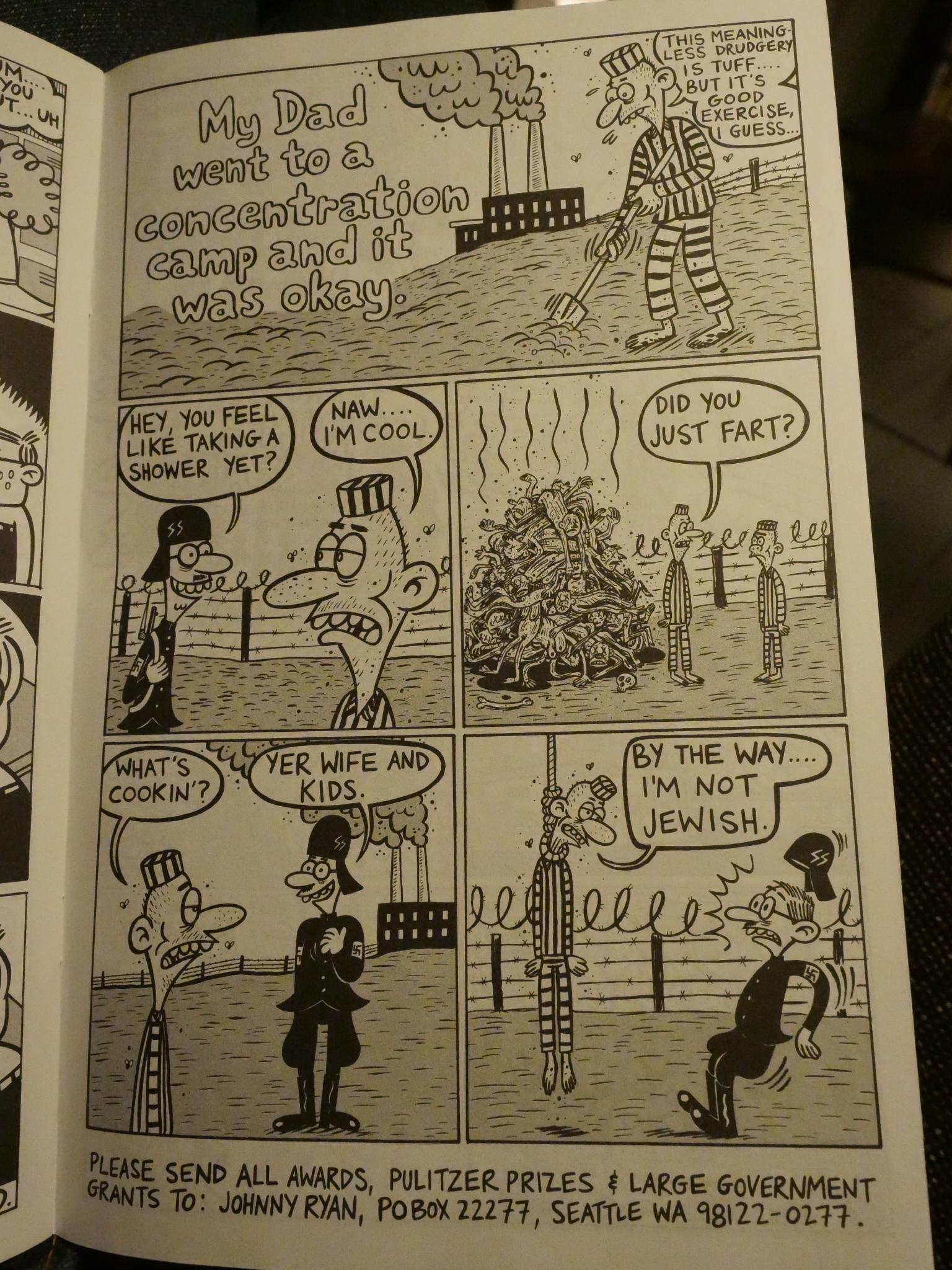 Those are good concentration camp jokes. 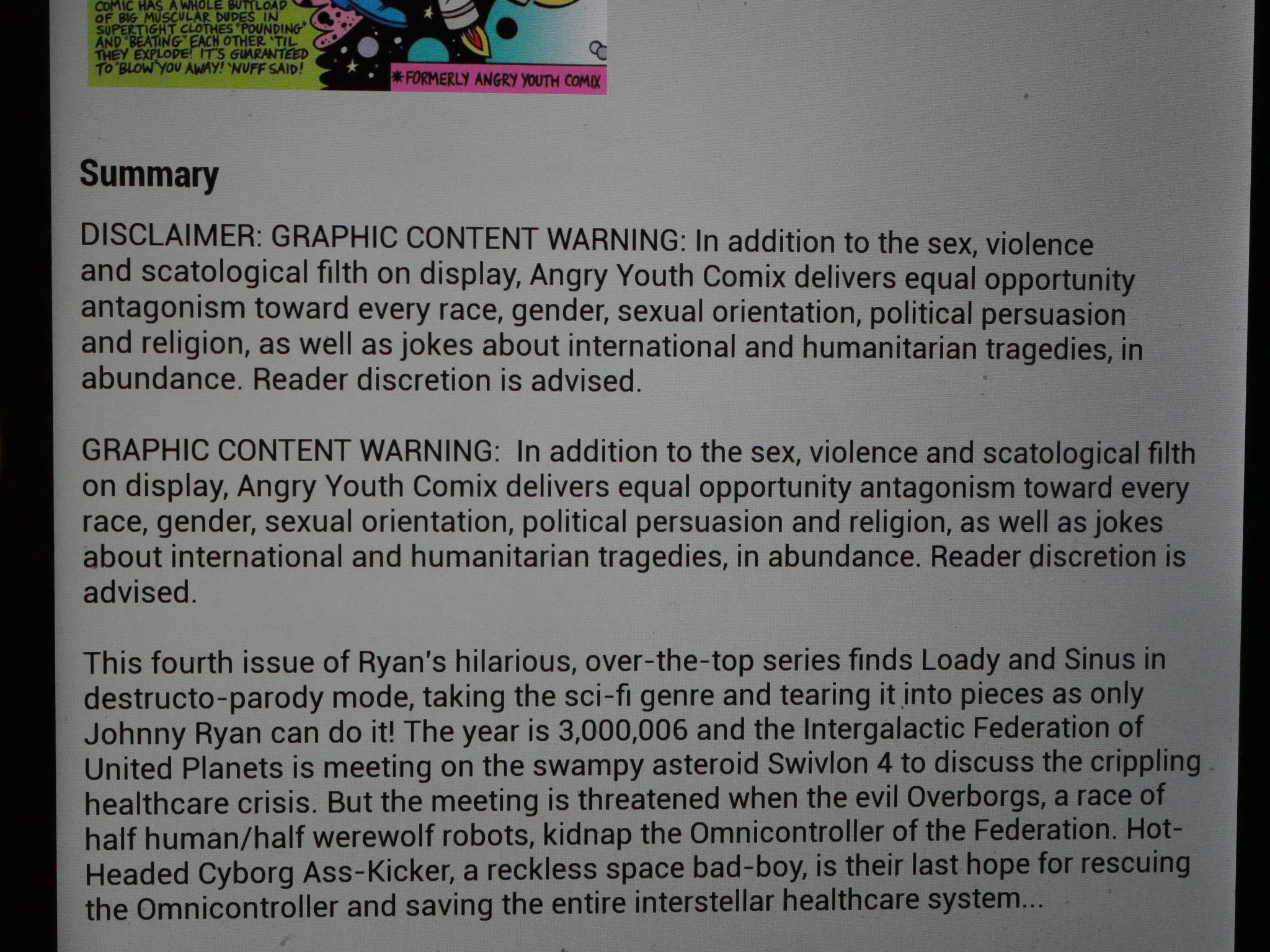 For some reason or other, I stopped buying Angry Youth Comix after issue three. I picked up #7-13 easily enough this autumn, but I was completely unable to find the rest at any price. Then I had a look at Comixology (boo hiss Amazon) and all the issues were there, so I cheated and got those instead.

It’s very easy to pick up copies of comics published in the 80s and 90s, but it’s very difficult to find newer alternative comics. I guess the print runs are tiny.  You snooze you lose.

But that’s a good disclaimer up there. 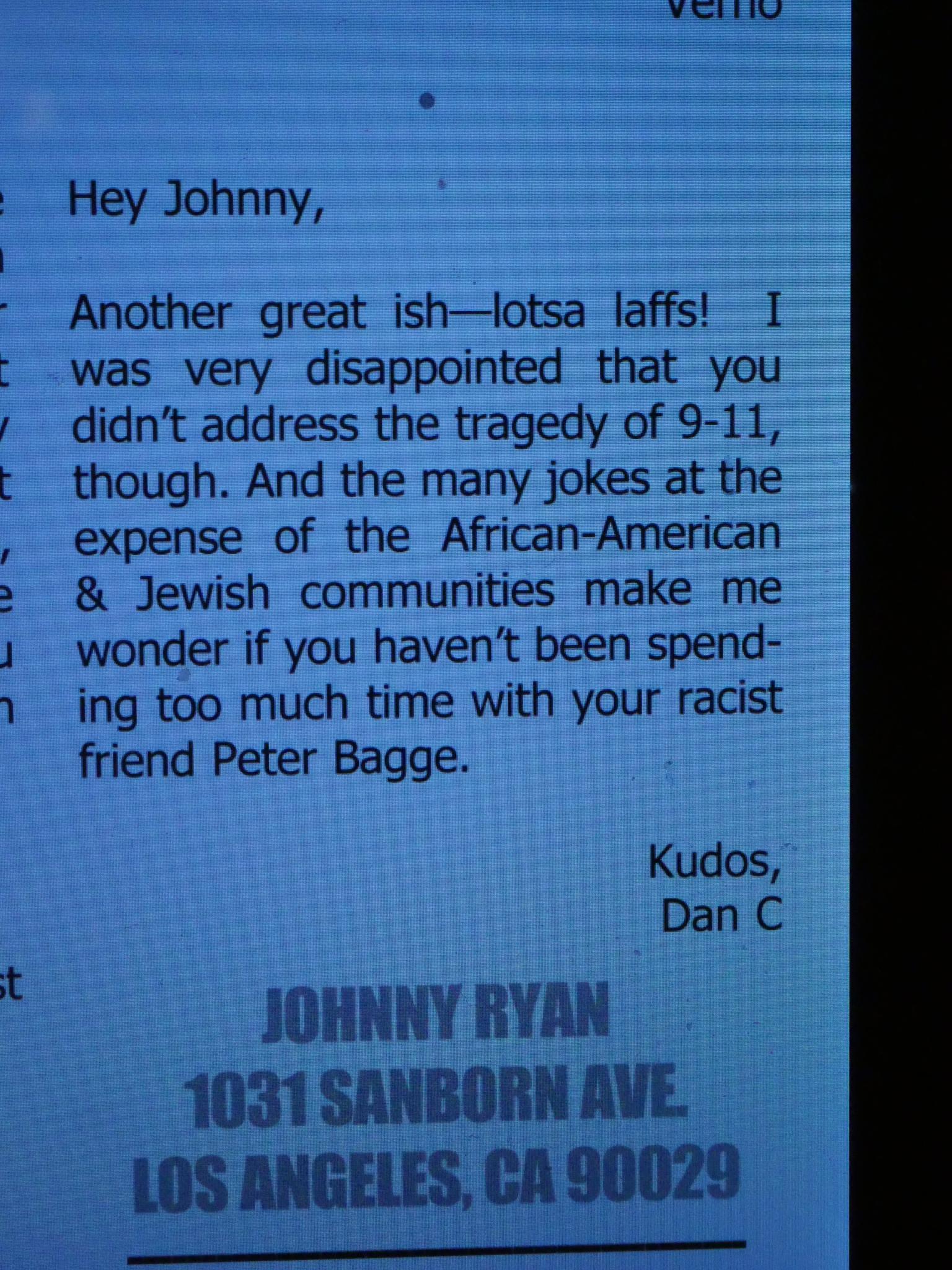 The Comixology issues seem to be complete: Even the letters pages are included. 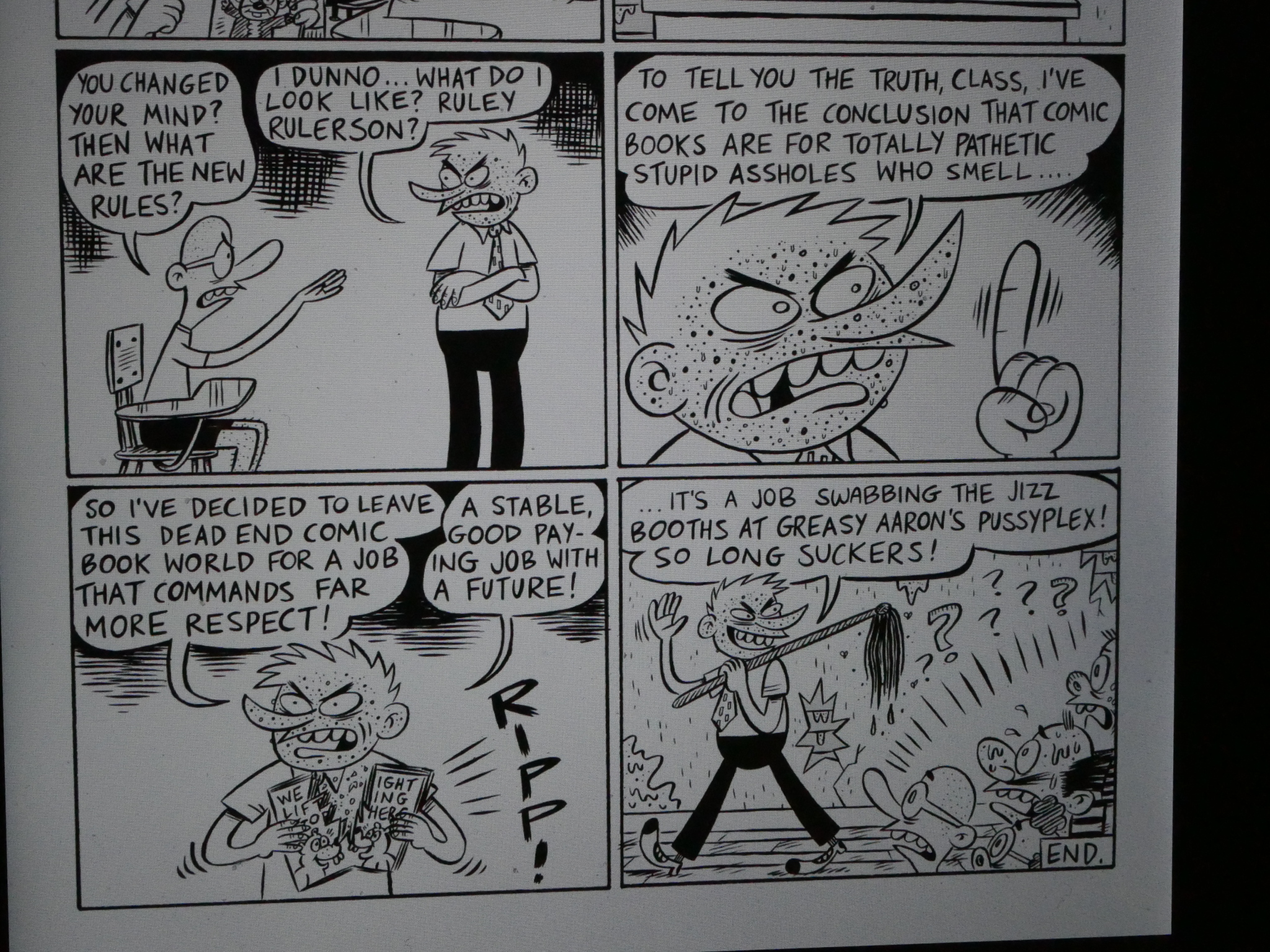 Ryan gives his perspective on working on comics. 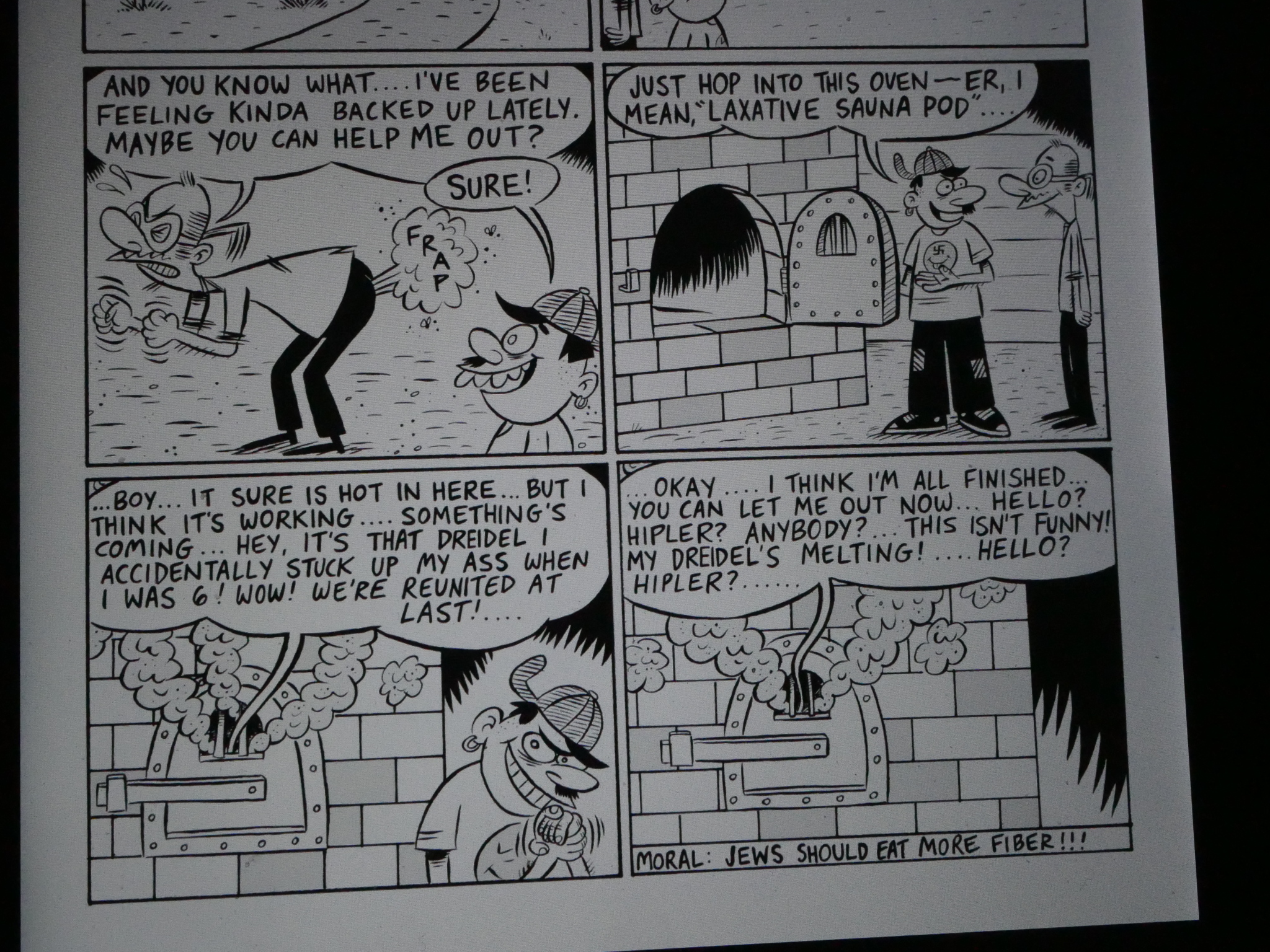 And the ever-popular holocaust skits. (That’s Hipster Hitler, or Hipler for short.) 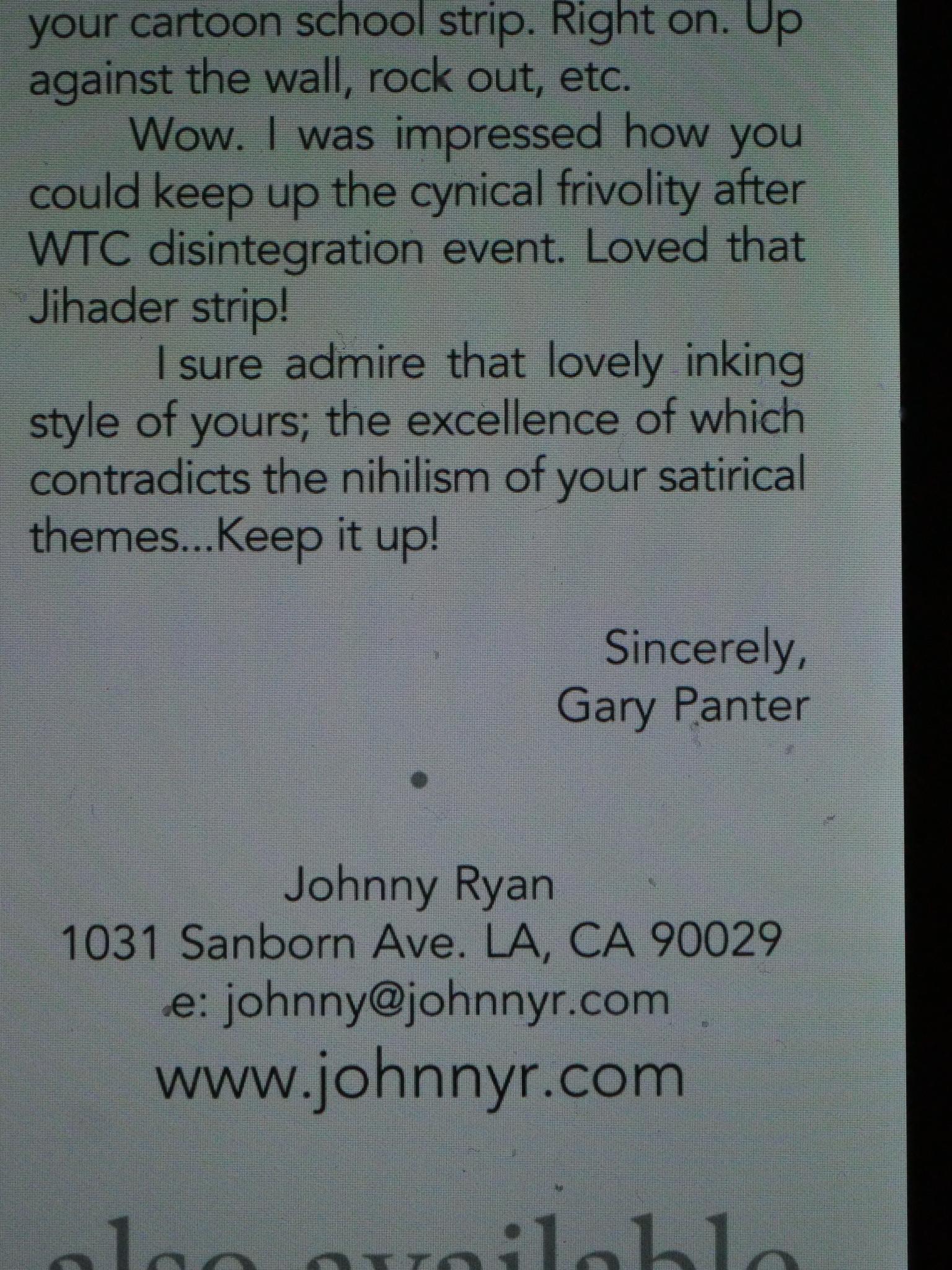 I’m not sure Panter is right here: Just because somebody works at their artwork doesn’t necessarily mean that they aren’t just having nihilist fun. I think. 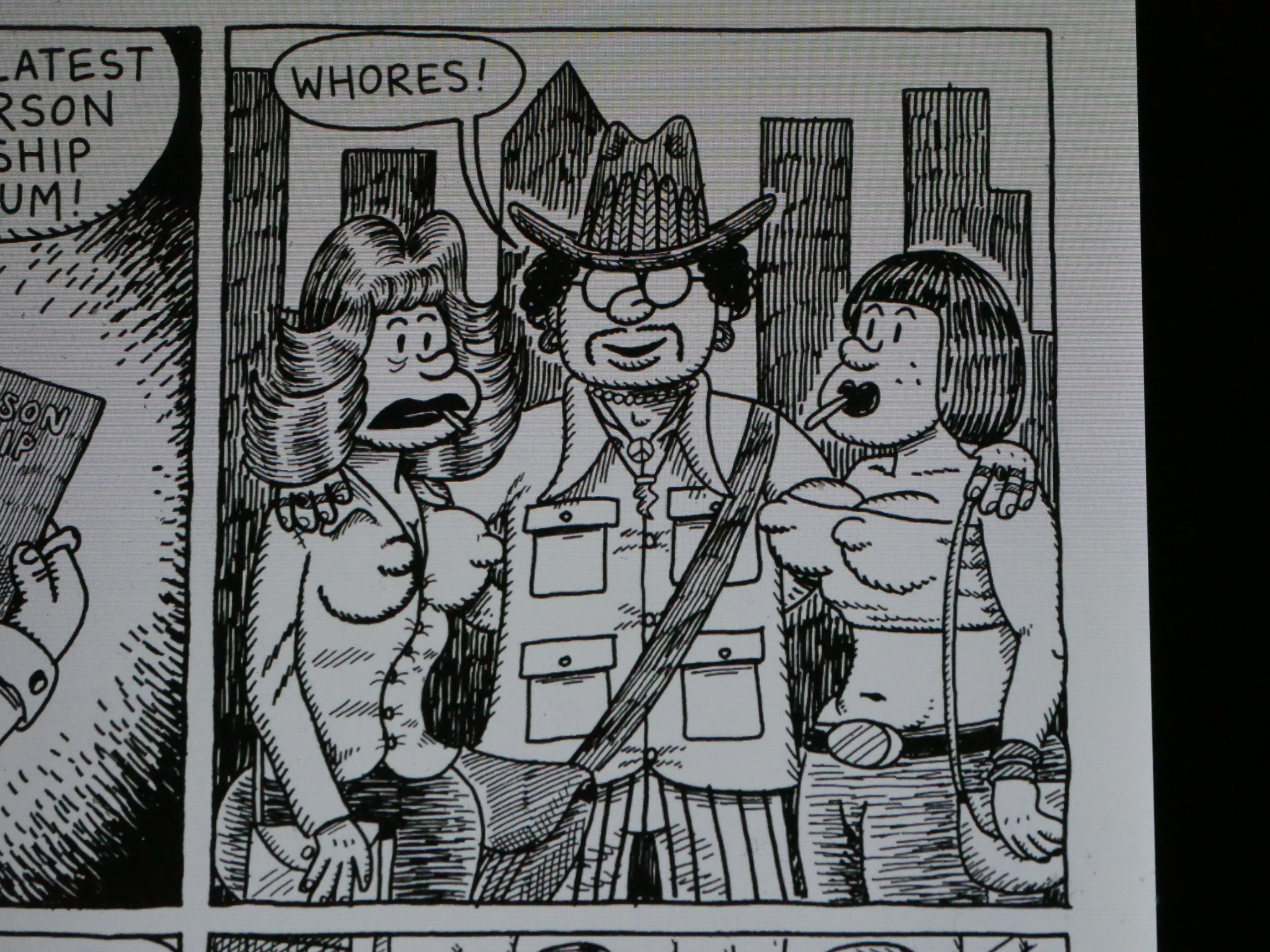 On the other hand, there’s this story done in a completely different, 70s underground style. I didn’t think it was by Ryan first, but I couldn’t find any other name attached to the piece, so perhaps it is? Ryan loves poking fun at Seth and the rest of the Drawn & Quarterly gang. 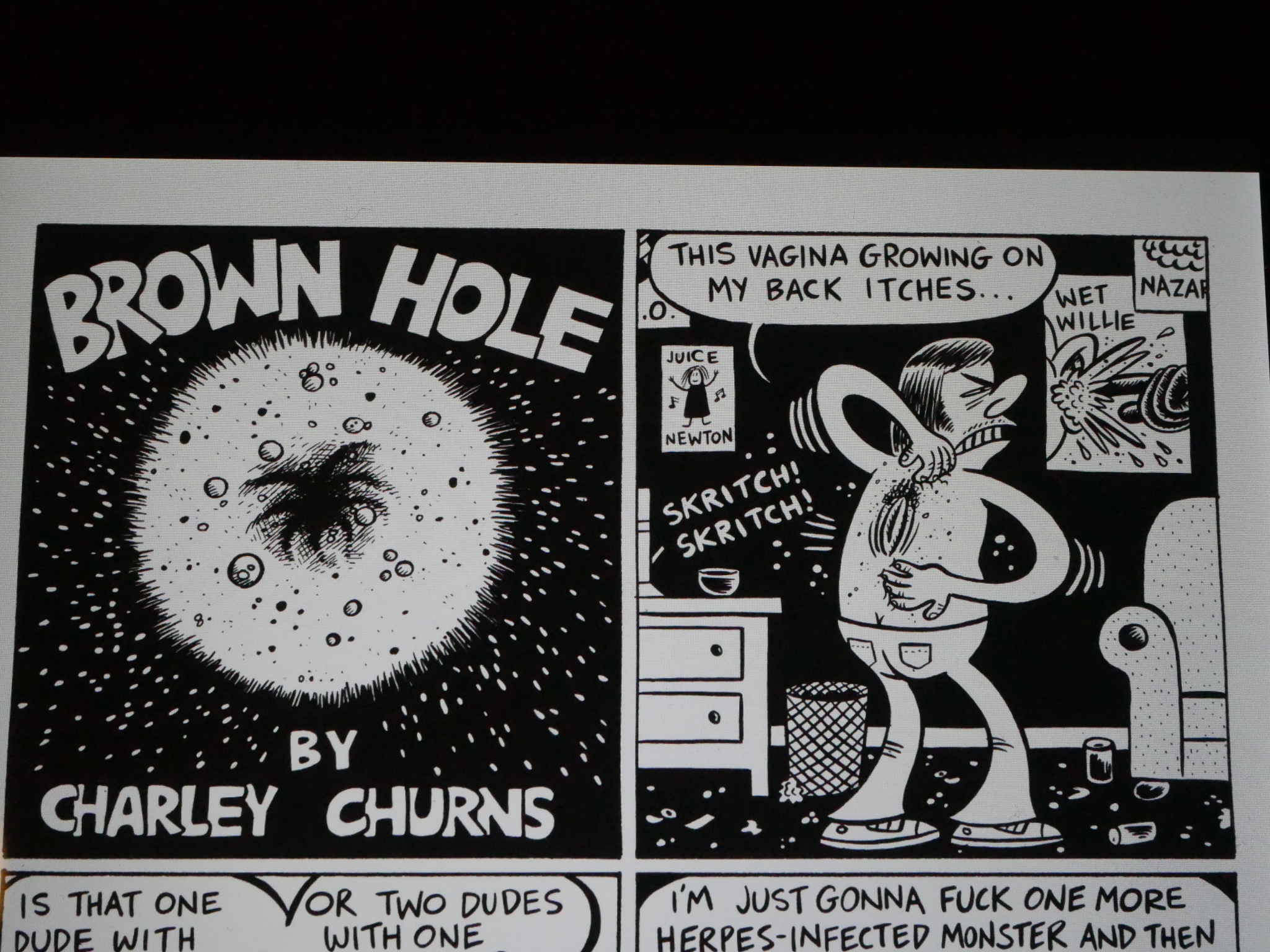 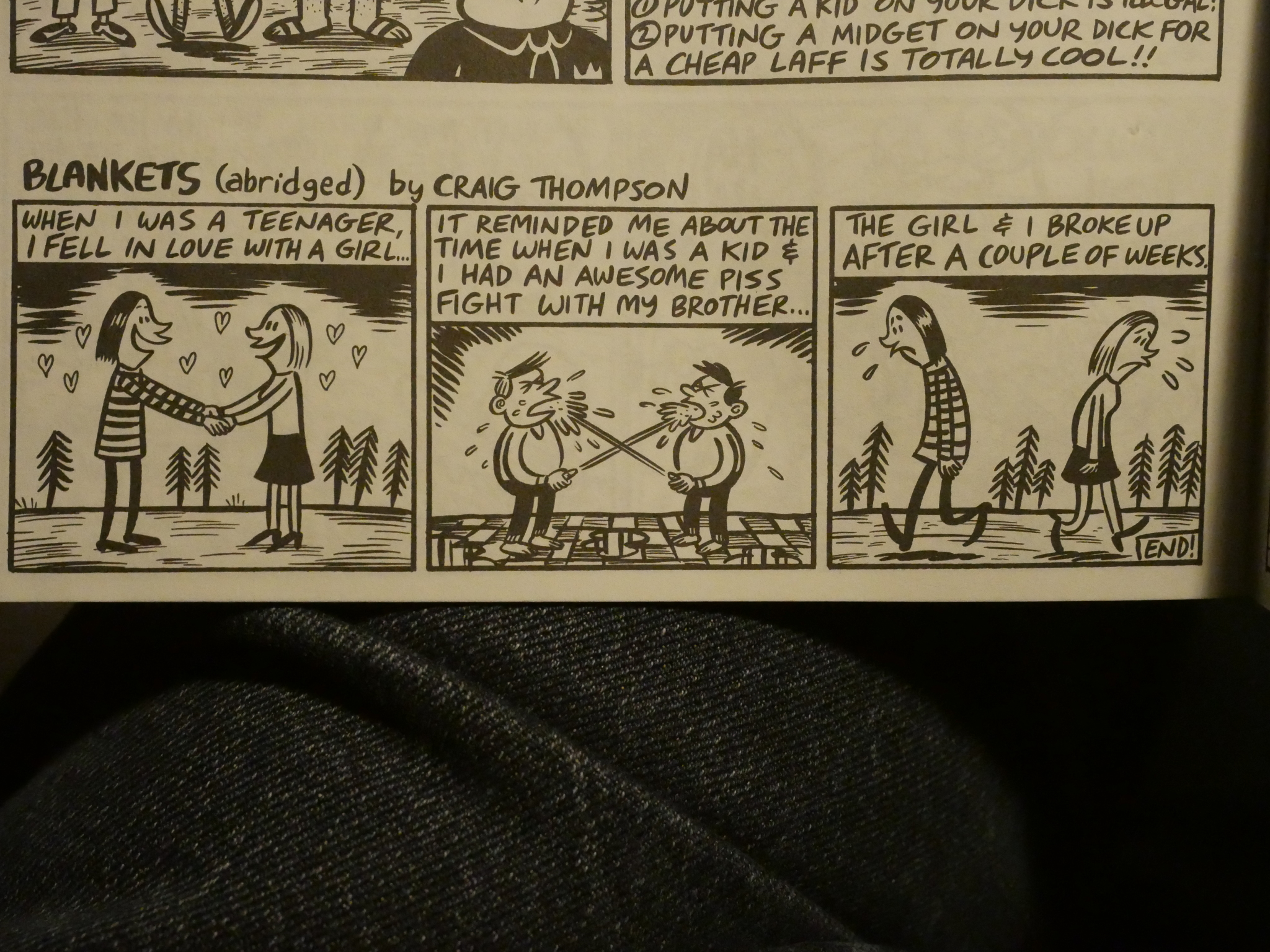 I think this summary of Blankets (by Craig Thompson) is way too kind, myself. Ah, the letters pages. Half of them are about how great and outrageous Ryan is, and one third is like this. It’s a good guess. While I’m rather on the fence about whether these comics are “good”, I think that’s the best speech balloon ever.

I may also be more than a bit burnt out by this stupid blog series. Not too many to go now… Just a few more…

Anyway, by this point all the longer stories in the series seem like improvised goofs. “Plot” morph into “plot” aimlessly, and sometimes circle back, but mostly just weave and bob. The tenth issue is 48 pages of gags like this. Very Sam Hendersonesque. That’s a really weak defence. The old smug “How come you’re discussing offensive comic books when there are children dying in Darfur?” gambit. It’s a moronic line to take, and may give us an indication of Ryan’s level of thoughtfulness about the entire project.

Angry Youth Comix was cancelled after issue fourteen, but a collected hardback edition was published last year. Ryan has continued to publish, and his most well-known series of books is probably the Prison Pit books, which is more violence and less jokes, if I remember correctly. I’ve only read the first book.