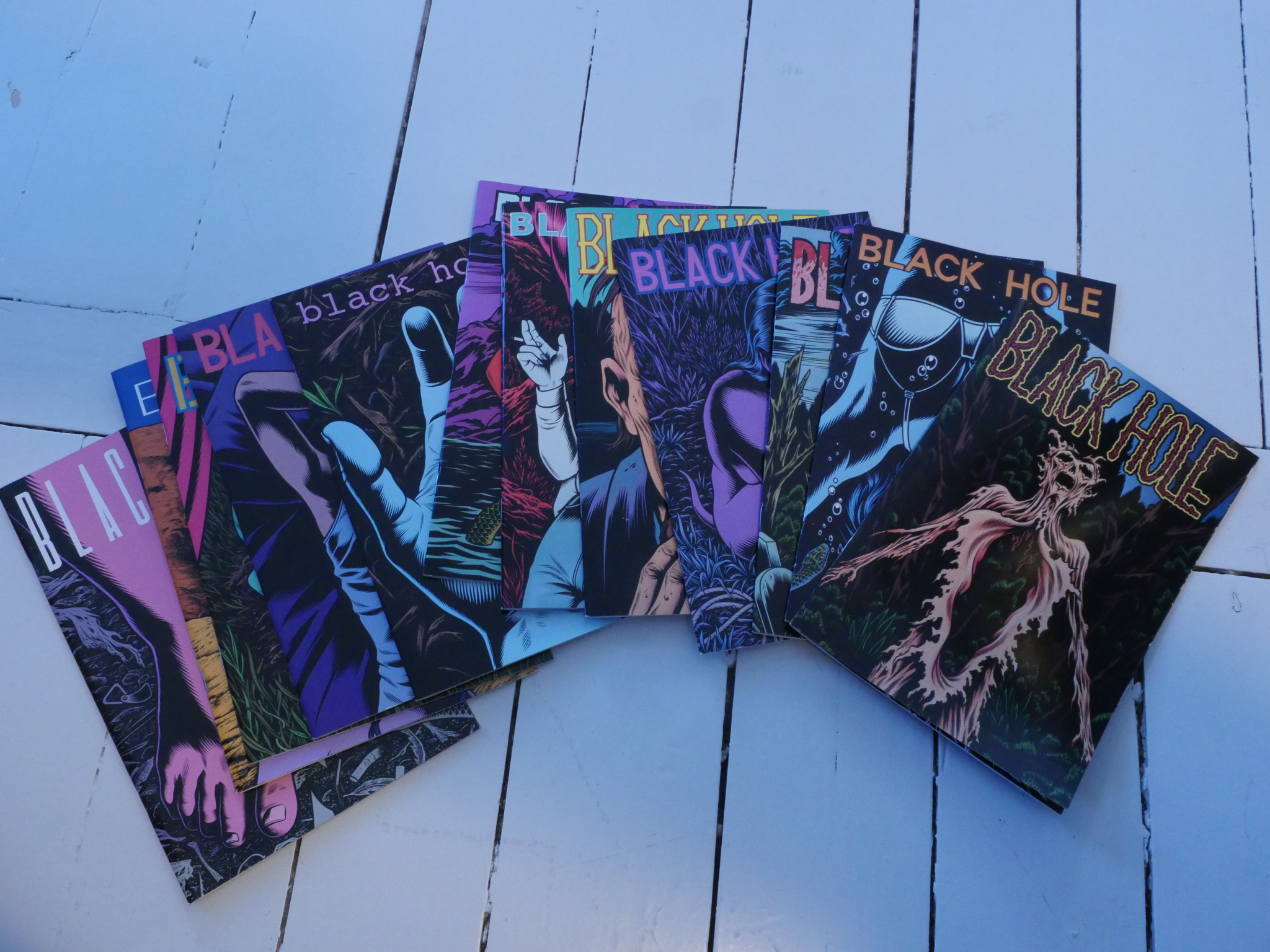 This book is Charles Burns magnum opus on being a teenager, doing drugs and having sex. And, of course, having horrible mutating diseases.

He’d been doing work in this area pretty much from the beginning, but only scratching the surface. So to speak. He finally went all out here, and it’s even more astounding than I remember it being.

For one, it’s the attention to detail and the incredible consistency over the 11 year period it took to make this 12 issue series. All the issues have the same look and feel: A thick cardboard cover, glossy coated white interior paper, and all the issues open like this (with different content each time, of course): 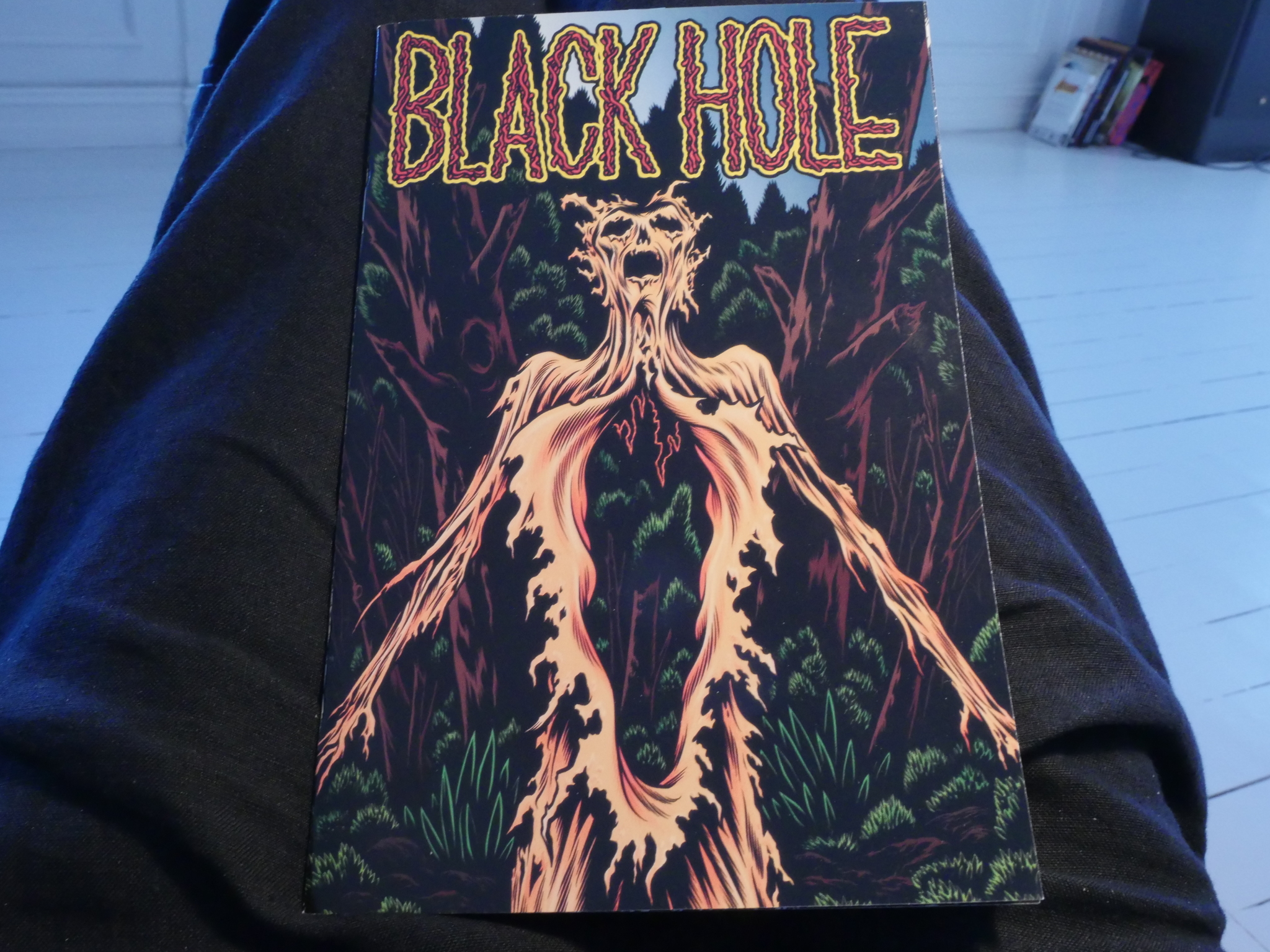 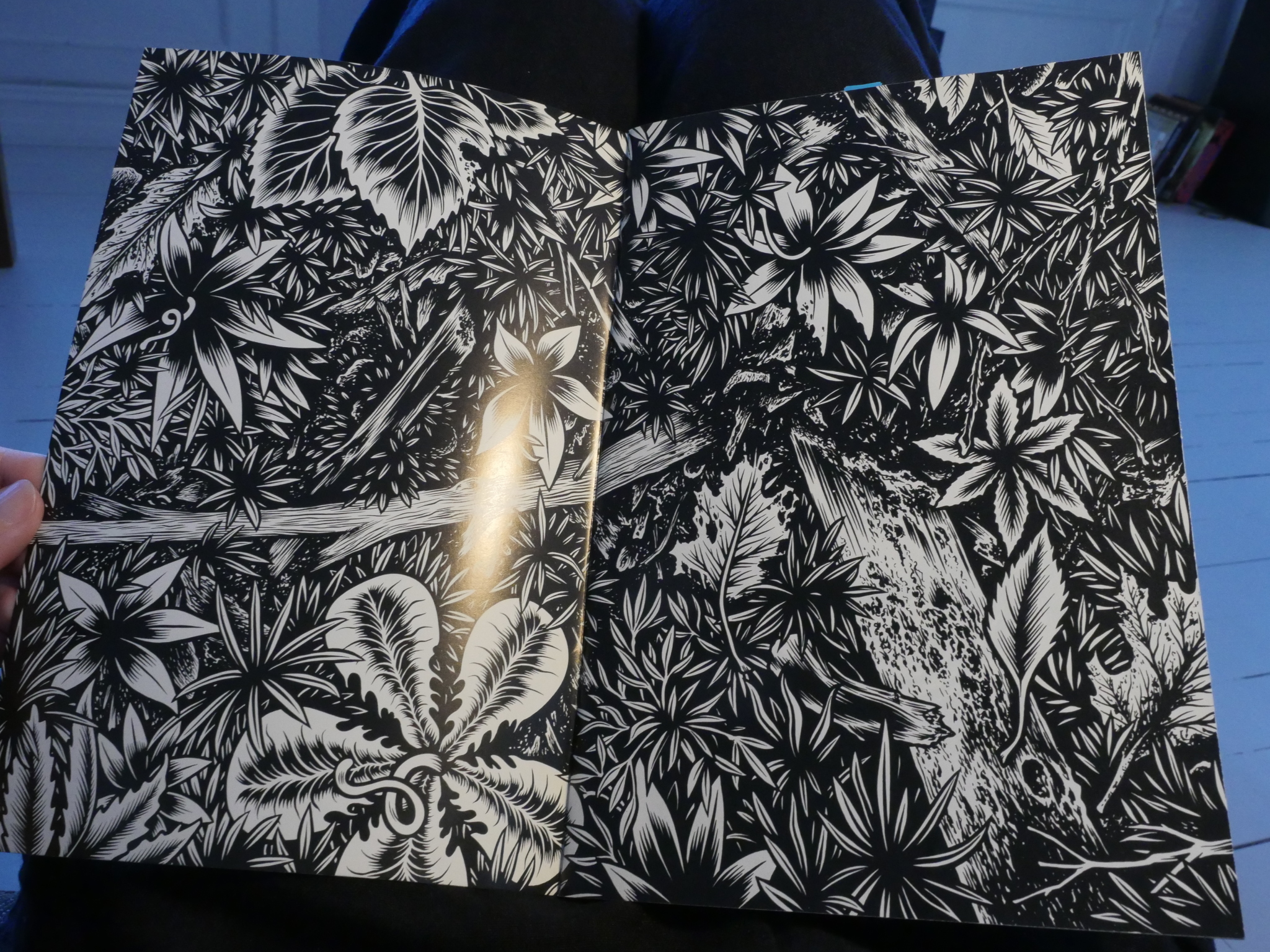 Endpapers, almost always showing a section of ground from the forest. 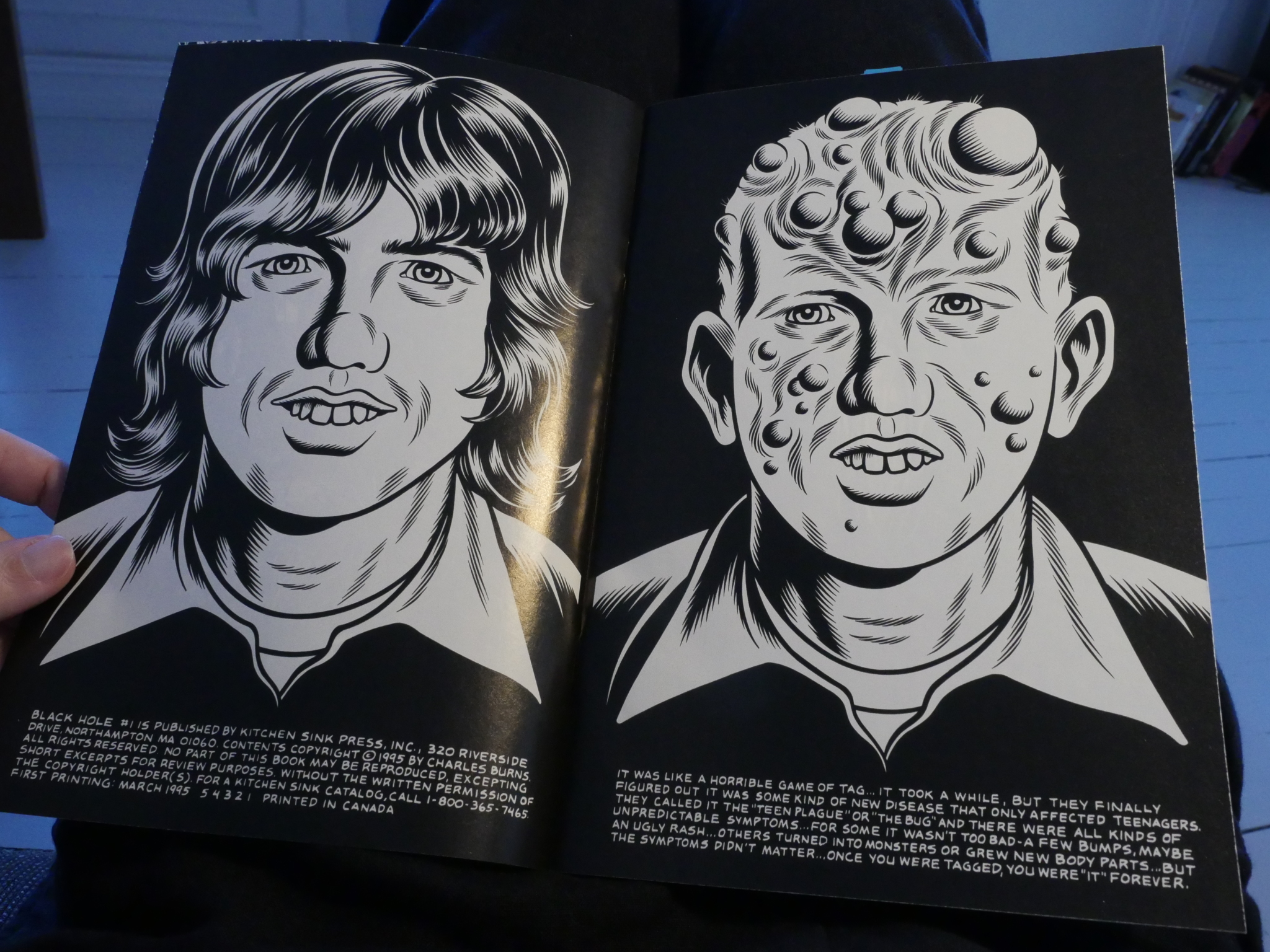 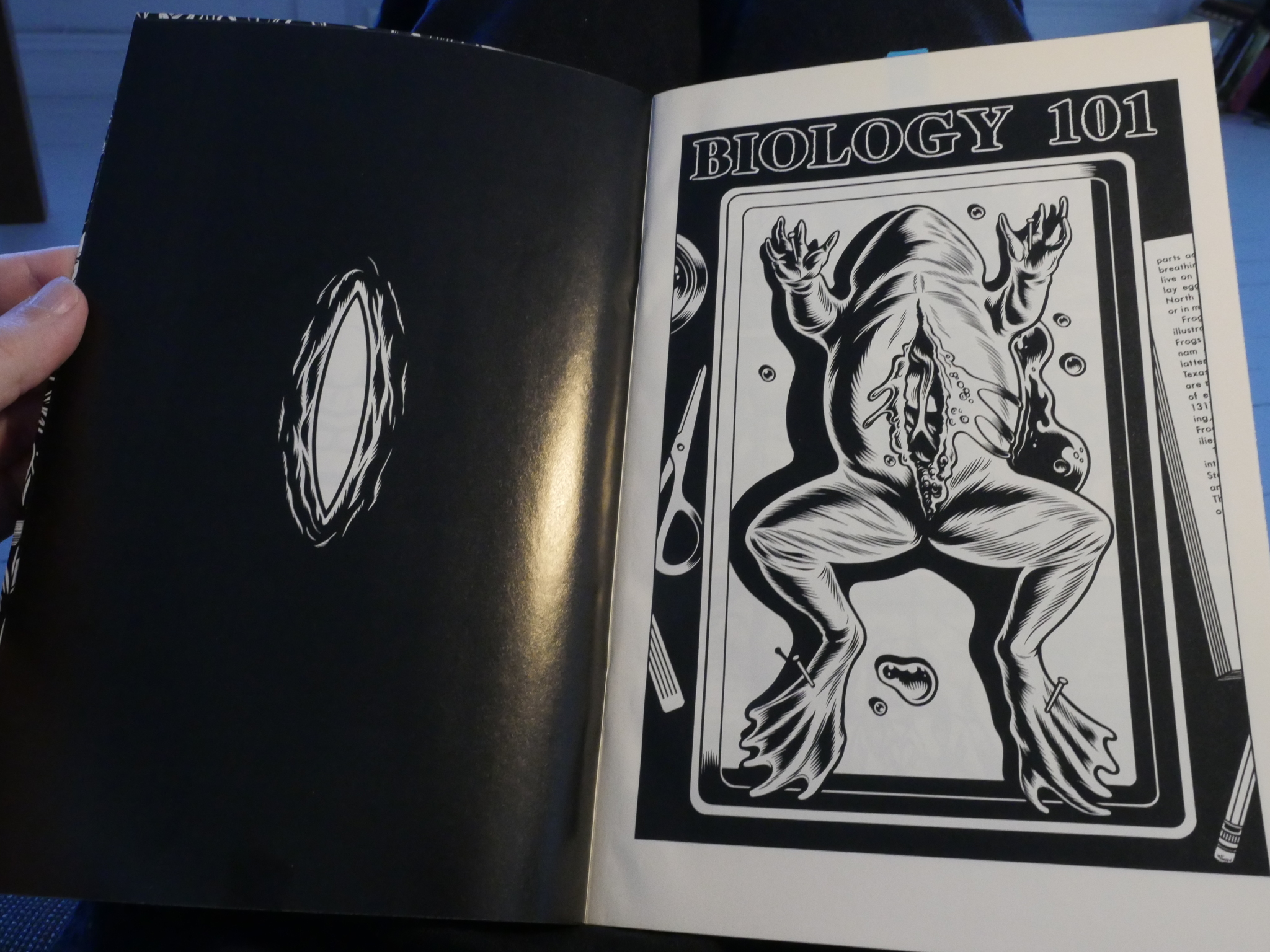 Then the opening spread, with a symbol that may or may not somehow sum up the chapter you’re about to read. And then, of course, it starts.

This ritual introduction to each chapter really sets the tone, I think. It’s almost like a visual chant that bring our brains into the mood for what we’re about to read, and you know what’s coming is going to be intense. 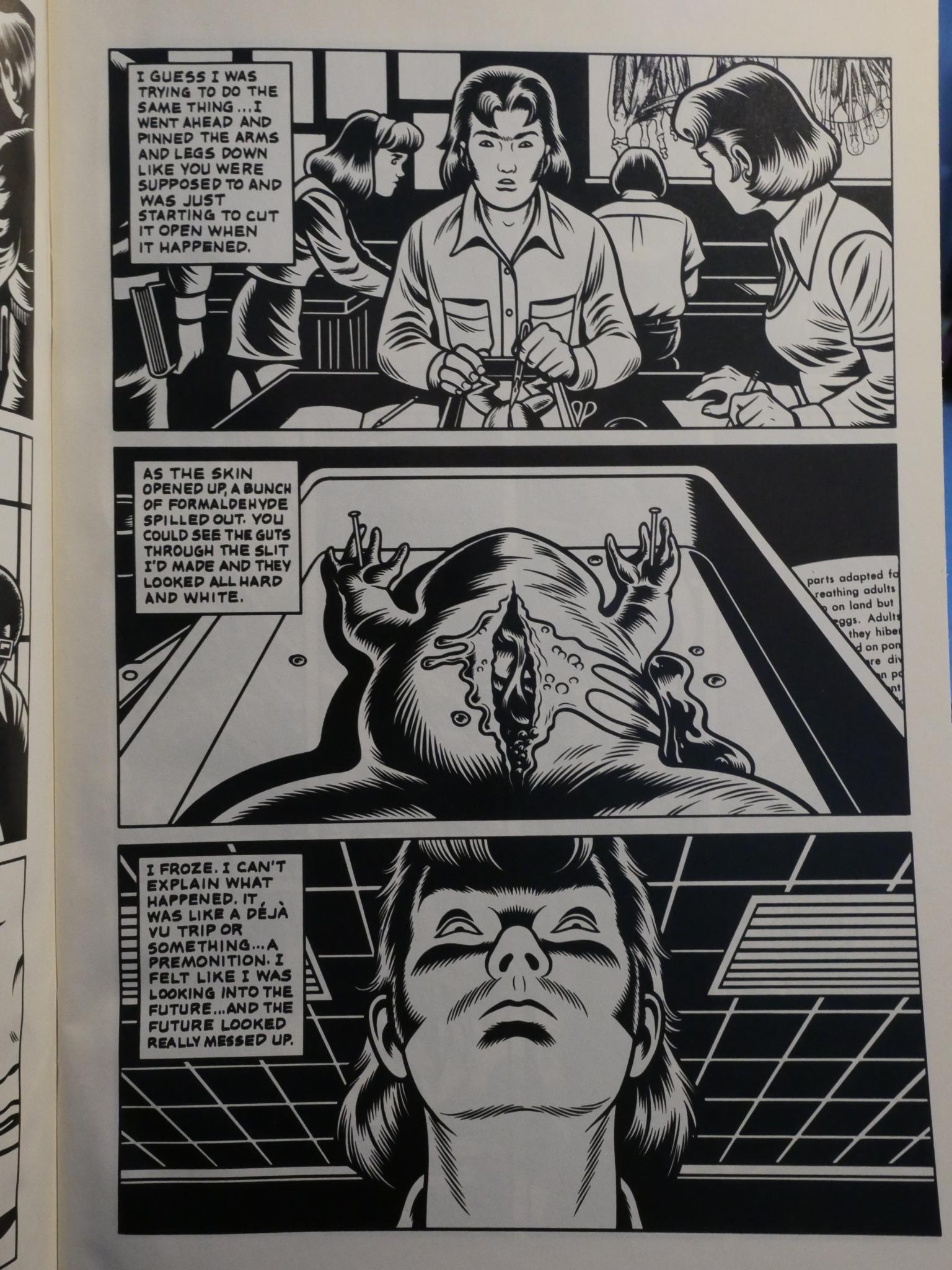 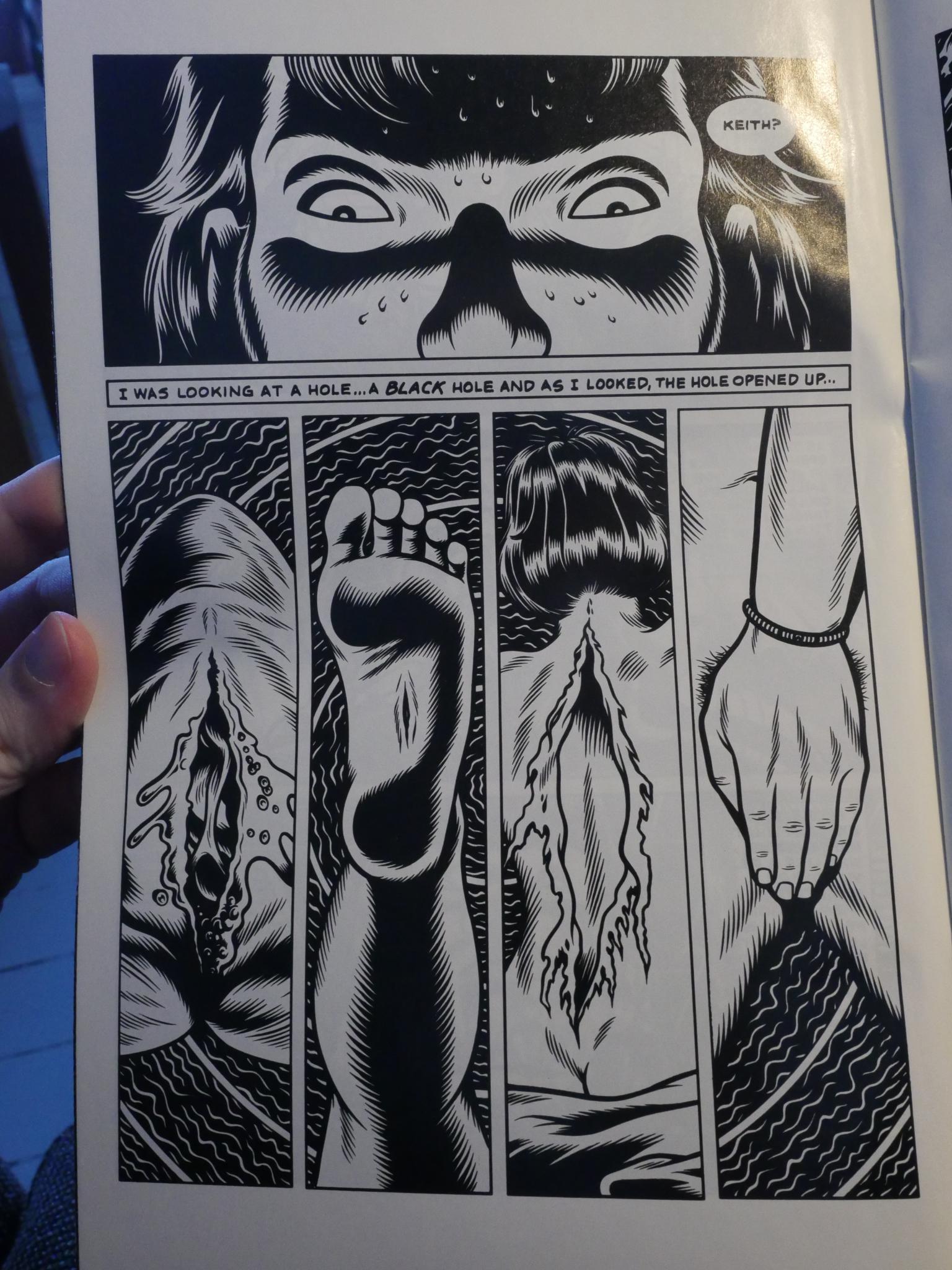 That’s page three and page four of the first chapter, and I admire how up-front Burns is about what this book is going to be about. These are the themes he’s going to explore: Here they are.

The shiny, white paper allows for extra-juicy black blacks, which is so important here. Every shadow is a nightmare.

And then at the end of the issue! Letters page: 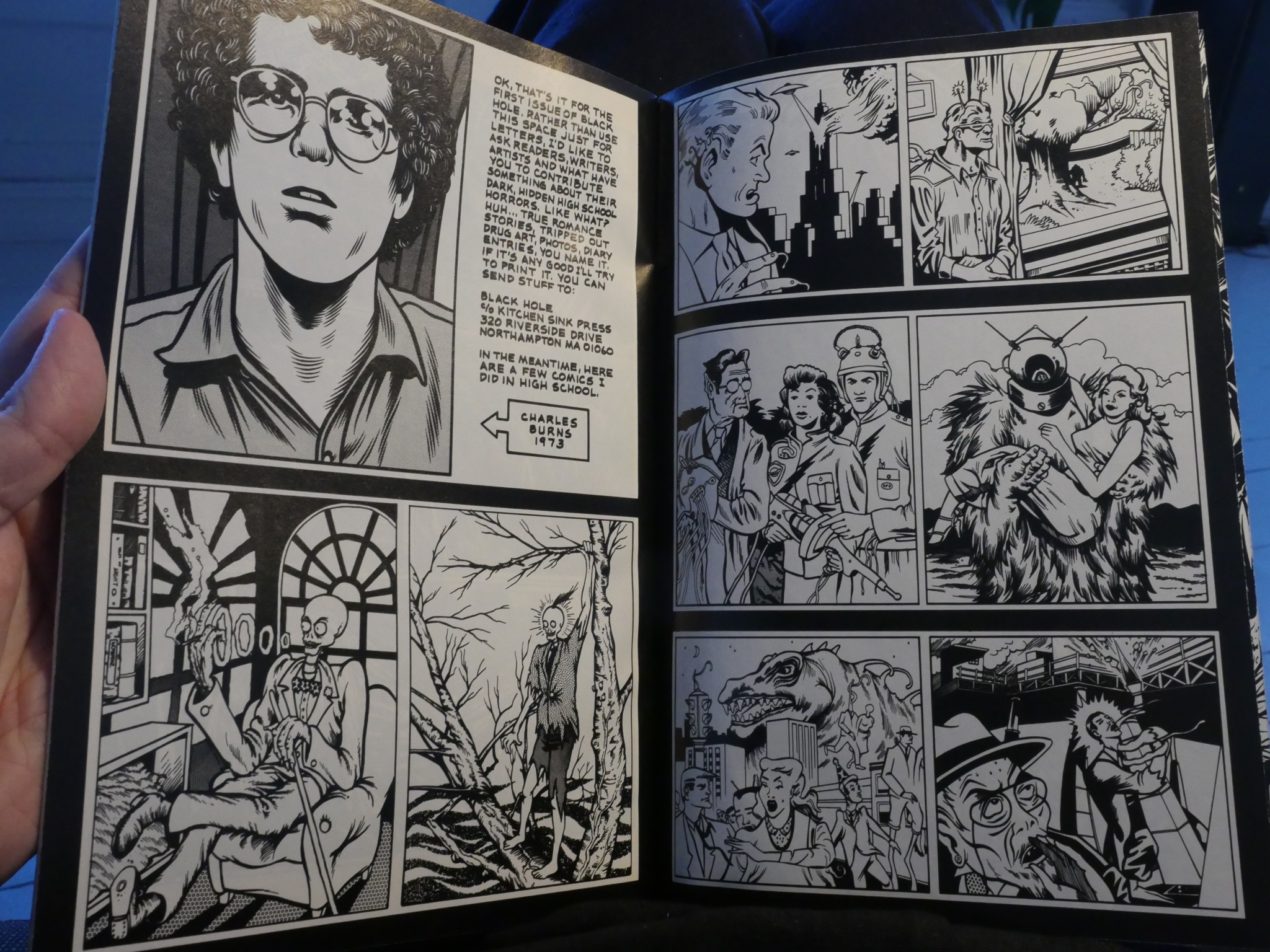 It’s the only mis-step in the entire series. After getting the reader trembling with horror and excitement, dropping us into this two-pager feels really weird, and not in a good way. Thankfully Burns dropped it after the second issue. 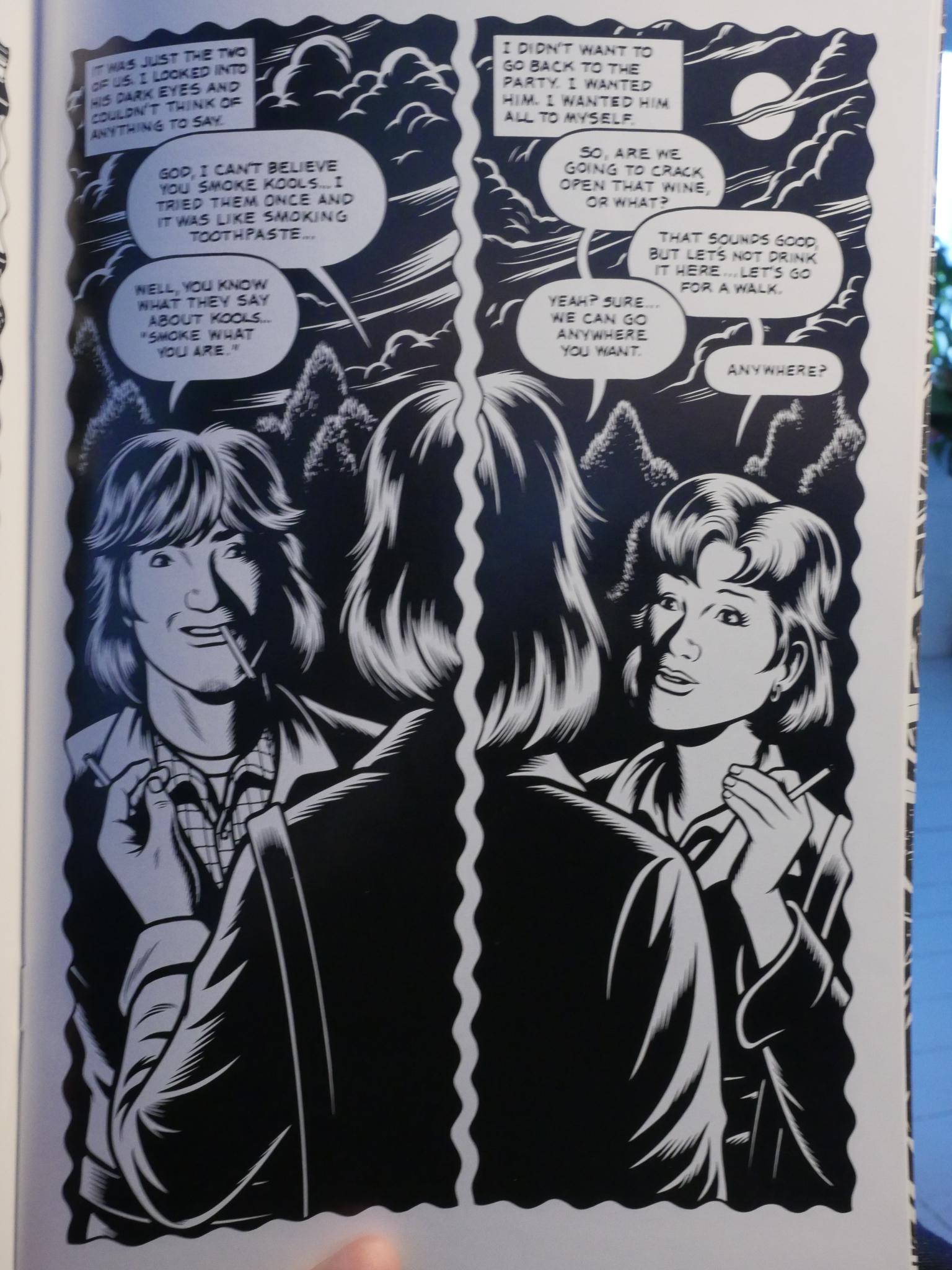 Anyway, Burns’ almost-inhuman artwork stays incredibly consistent over the eleven years it was make. There isn’t all that much overt experimentation, but I particularly liked this interesting way of showing the scene from both sides… 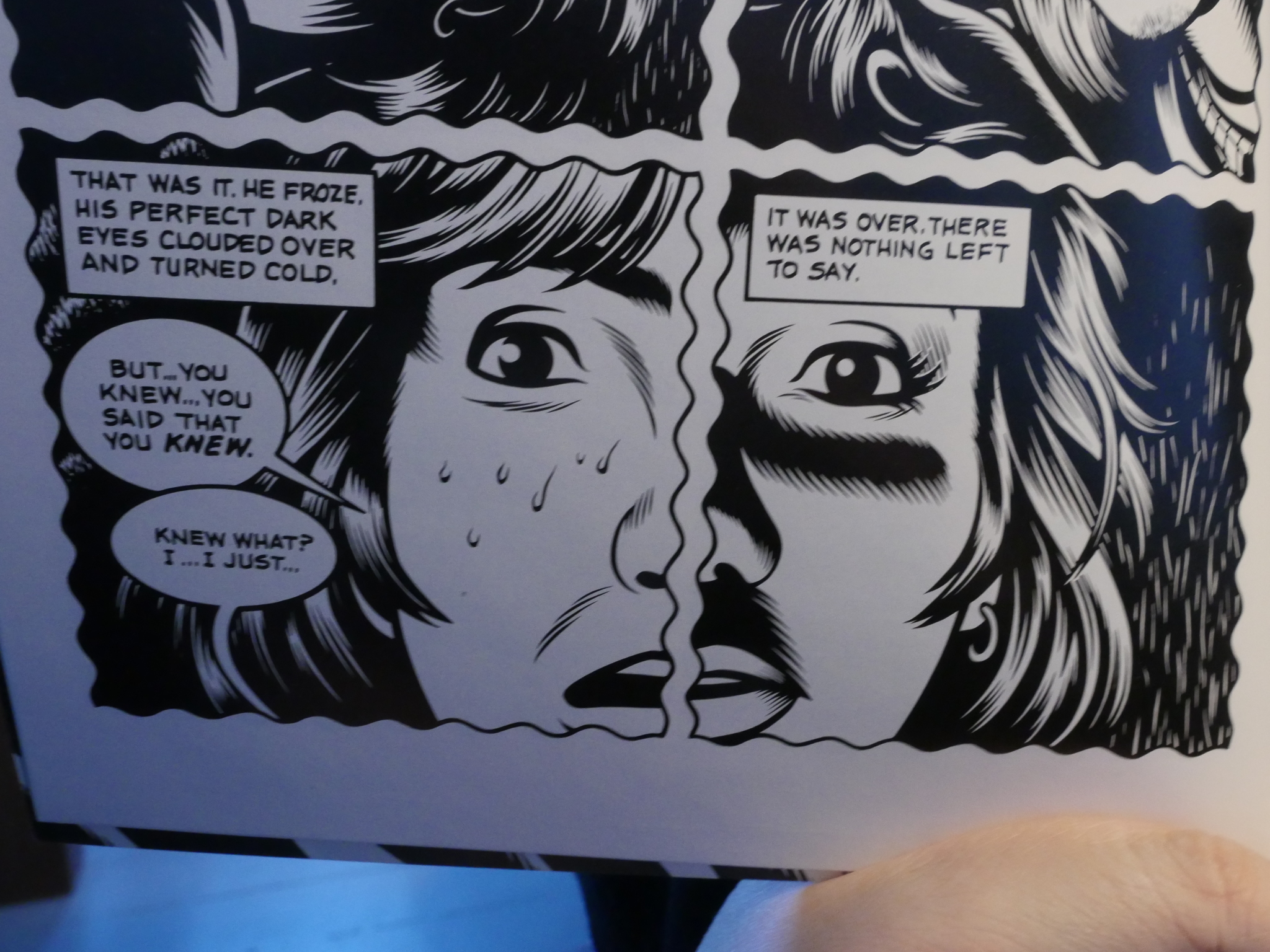 … as well as the doubling of the scene later. There’s a lot of recurring imagery, pointing to almost-fathomable meaning…

Anyway! While re-reading this, I found myself so engrossed that I don’t really have a whole lot to say about this book. After issue two I have no notes whatsoever: I just sat on the couch devouring the book without any thought for witty bon mots.

But now I’m curious as to what the collected edition is like. It was such a perfect reading experience, issue by issue. The book is divided into clear chapters, and most issues have just one of these chapters. (Sometimes there’s two chapters in one issue.) So it feels quite made-for-serialisation, and would probably have looked and felt quite different if it had been created straight for the big hardback. (Which must be a bit less than 400 pages, I would think?)

Oh, they dropped the quotations. Hm… That kinda changes how it all ends… Interesting… Hey, that’s a pretty good review. Read that one instead.