Honk #1-5 edited by Tom Mason and then Joe Sacco. 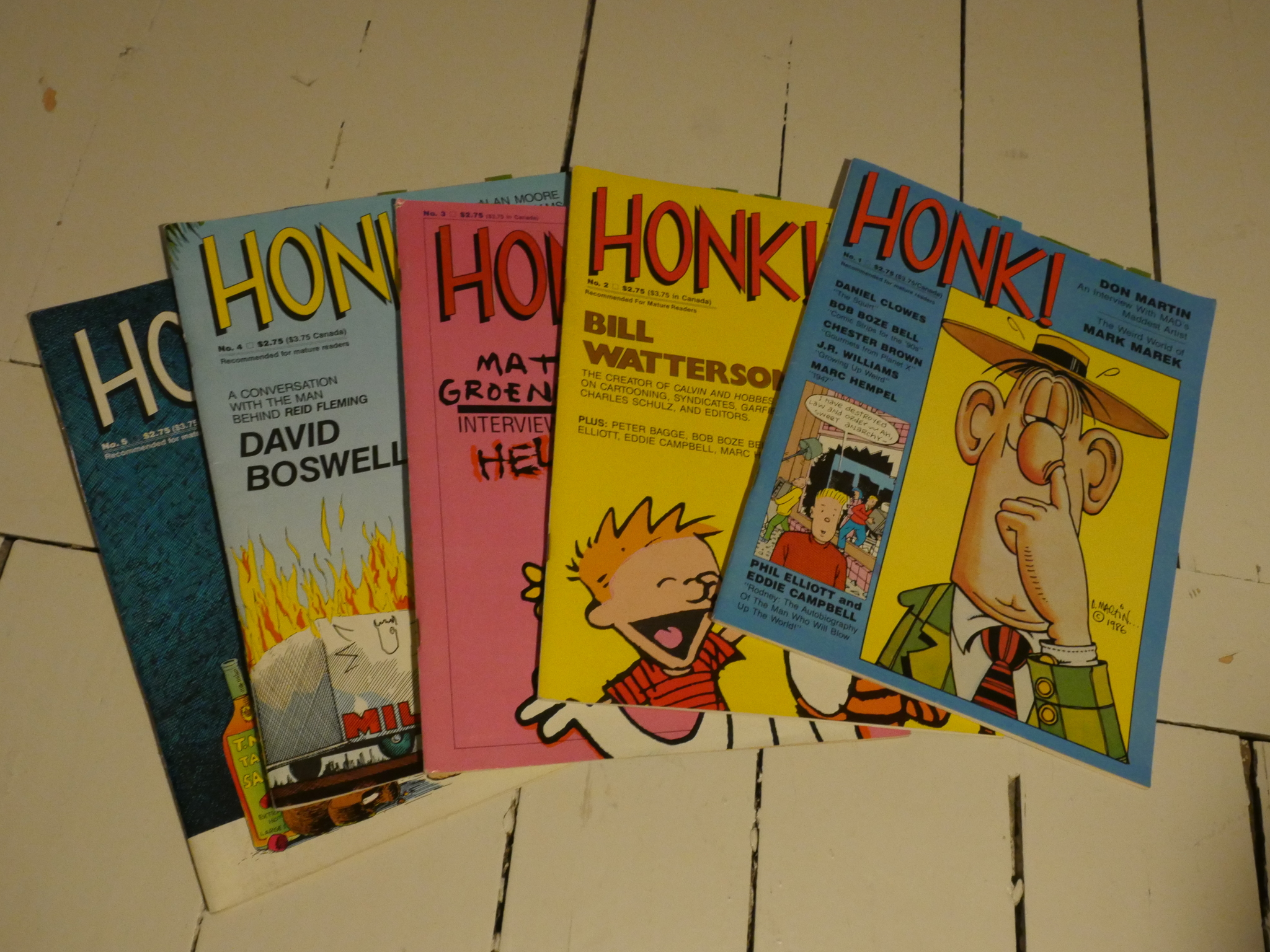 Honk! was Fantagraphics’ first humour magazine. It’s a mixture of comics, interviews and features: It sometimes reads a bit like a version of The Comics Journal that somebody has stuck a lot of comics pages in. 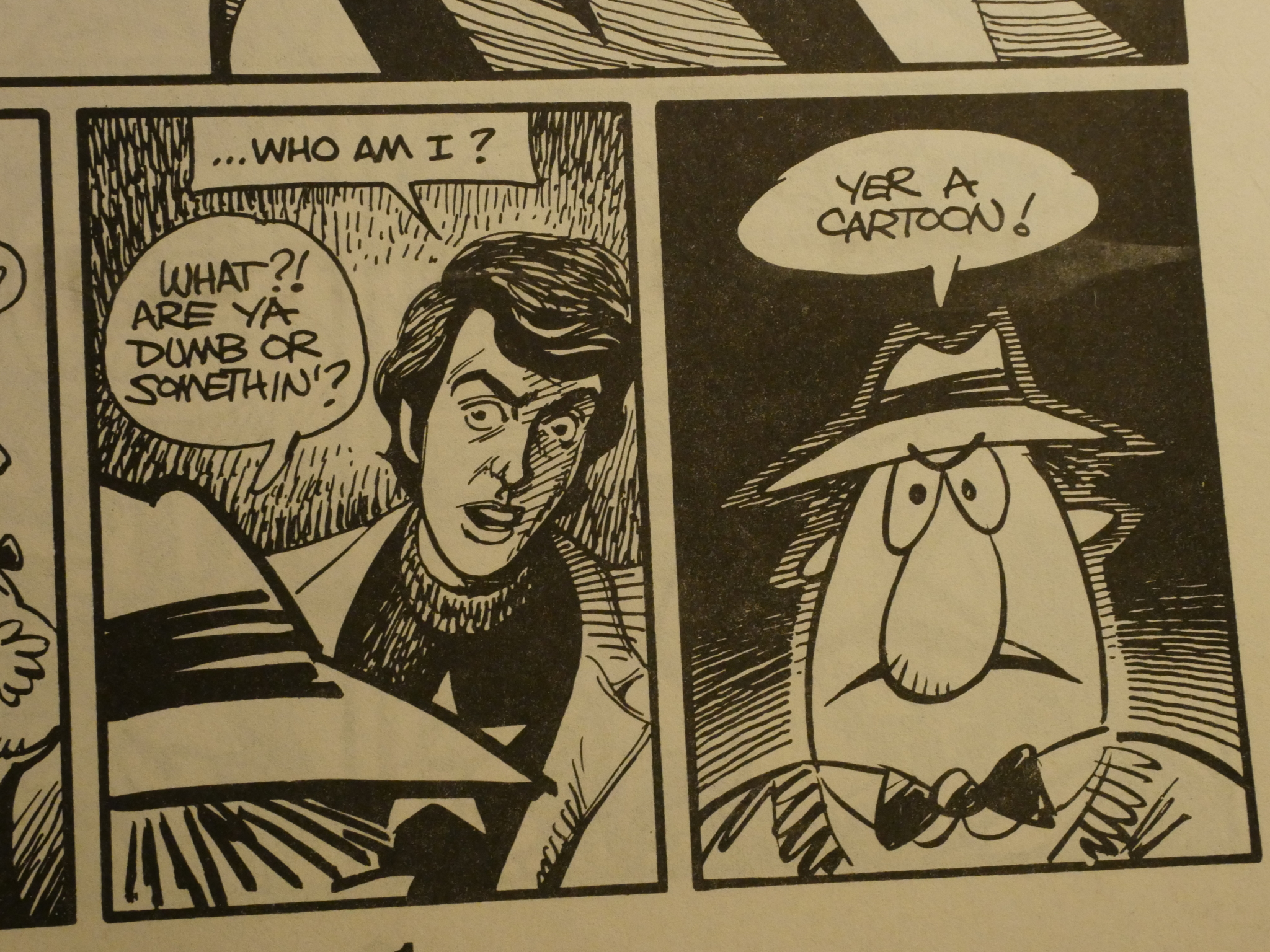 Quite a few of the pieces deal with comics formalisms, like this one by Marc Hempel. I was surprised to see him pop up in these issues (quite a few times and always with this shtick) because I don’t remember him as a humorist. And they aren’t really that successful… 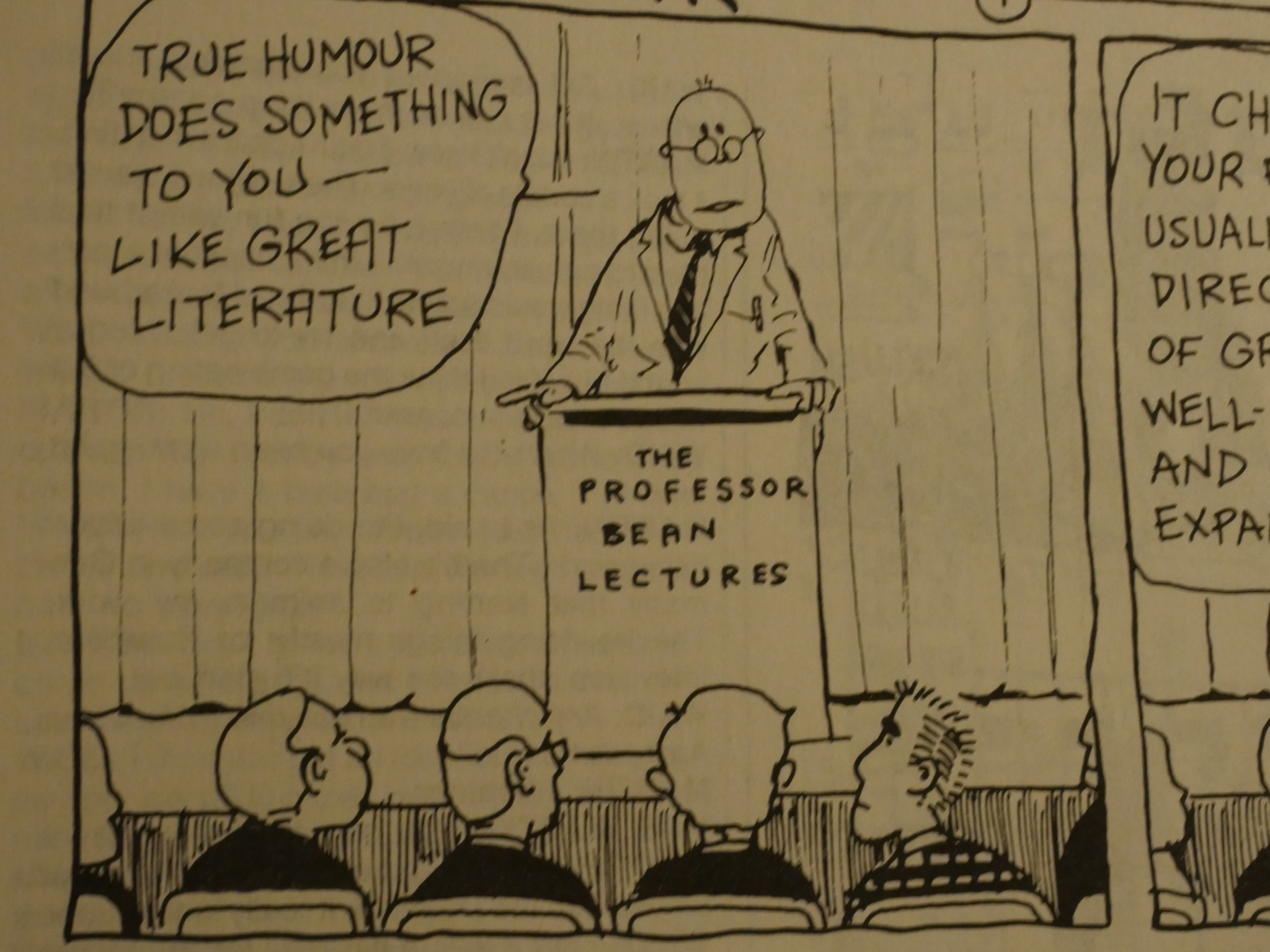 Another unexpected thing (well, I just had forgotten) is how many of the more familiar British people pop up. Here we have Eddie Campbell, but there’s also Phil Elliott, Glenn Dakin, John Bagnall… Oh, is that it? I guess it’s mostly Elliott and Campbell, who appear separately and together. 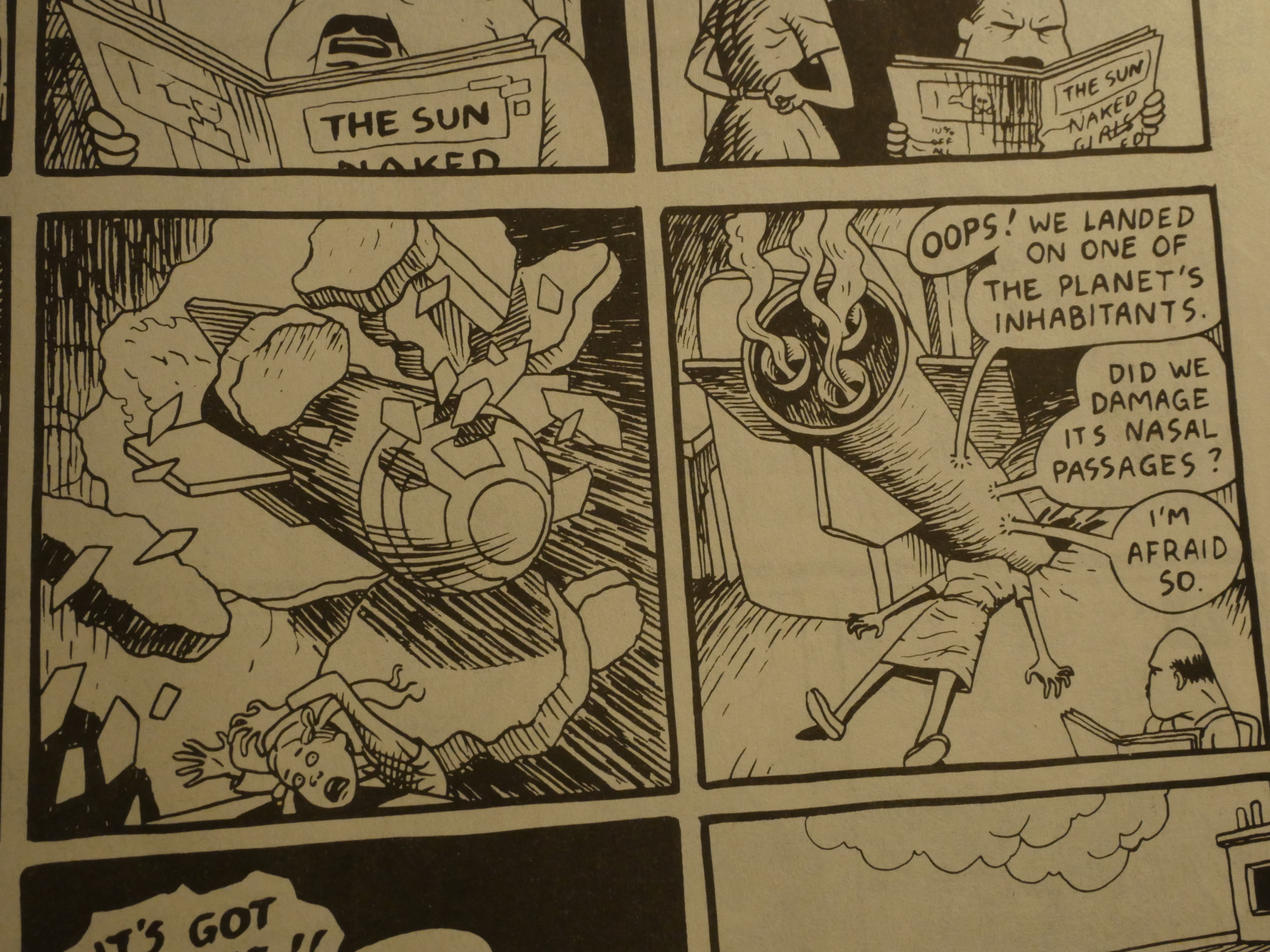 The amazing Chester Brown does a totally absurd and amazing two-page story. 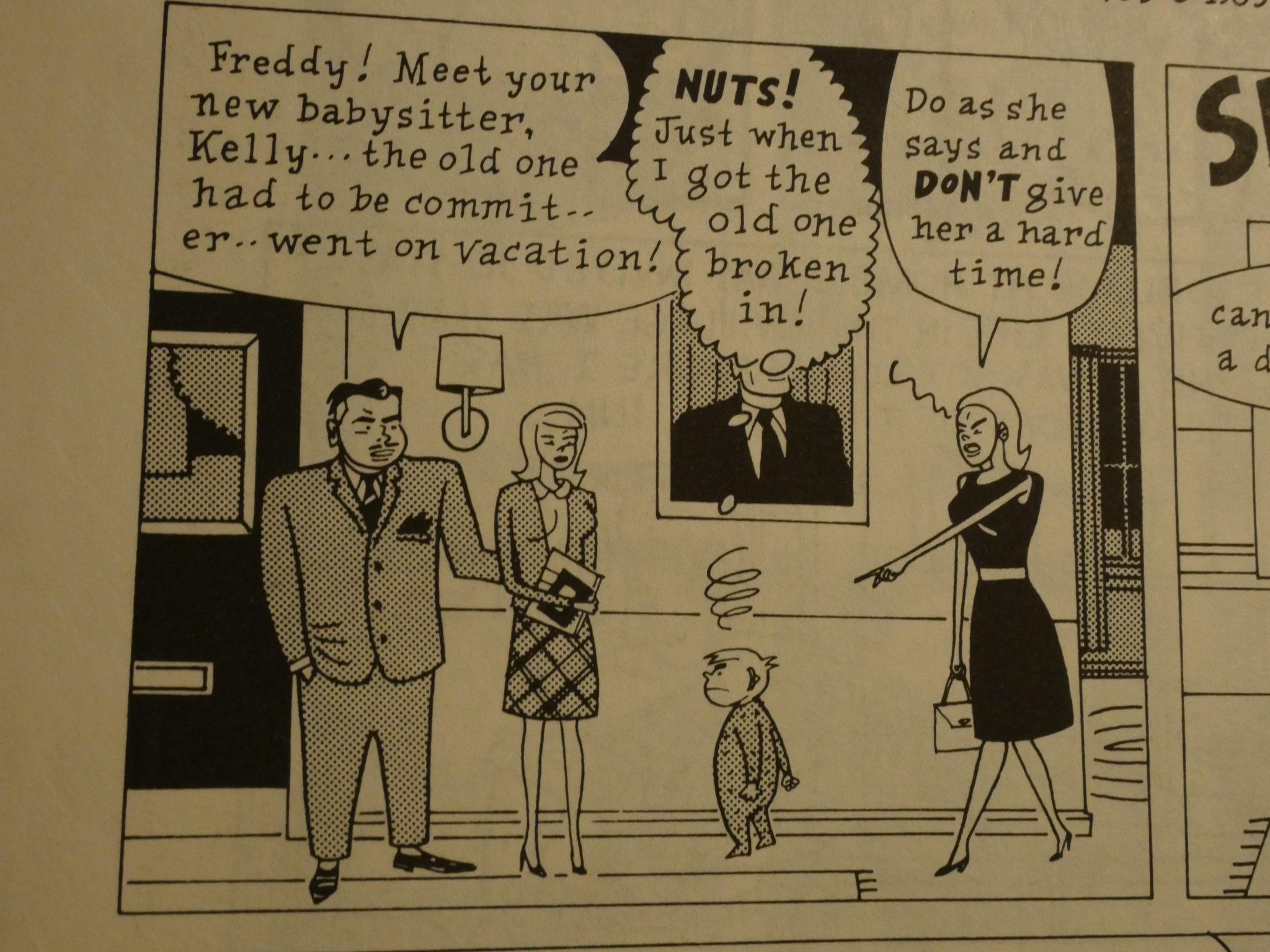 A 1983 Daniel Clowes story written by Mort Todd. Which reminds me: Is that a real person? I have always, somehow, assumed that that was a pen name used by somebody on the New York art/comedy scene (most likely Clowes himself), and I have no idea why. Perhaps my crack team of fact checkers can get on it?

No! He’s a person! The editor of Cracked, even. Well, a pseudonym, but still… 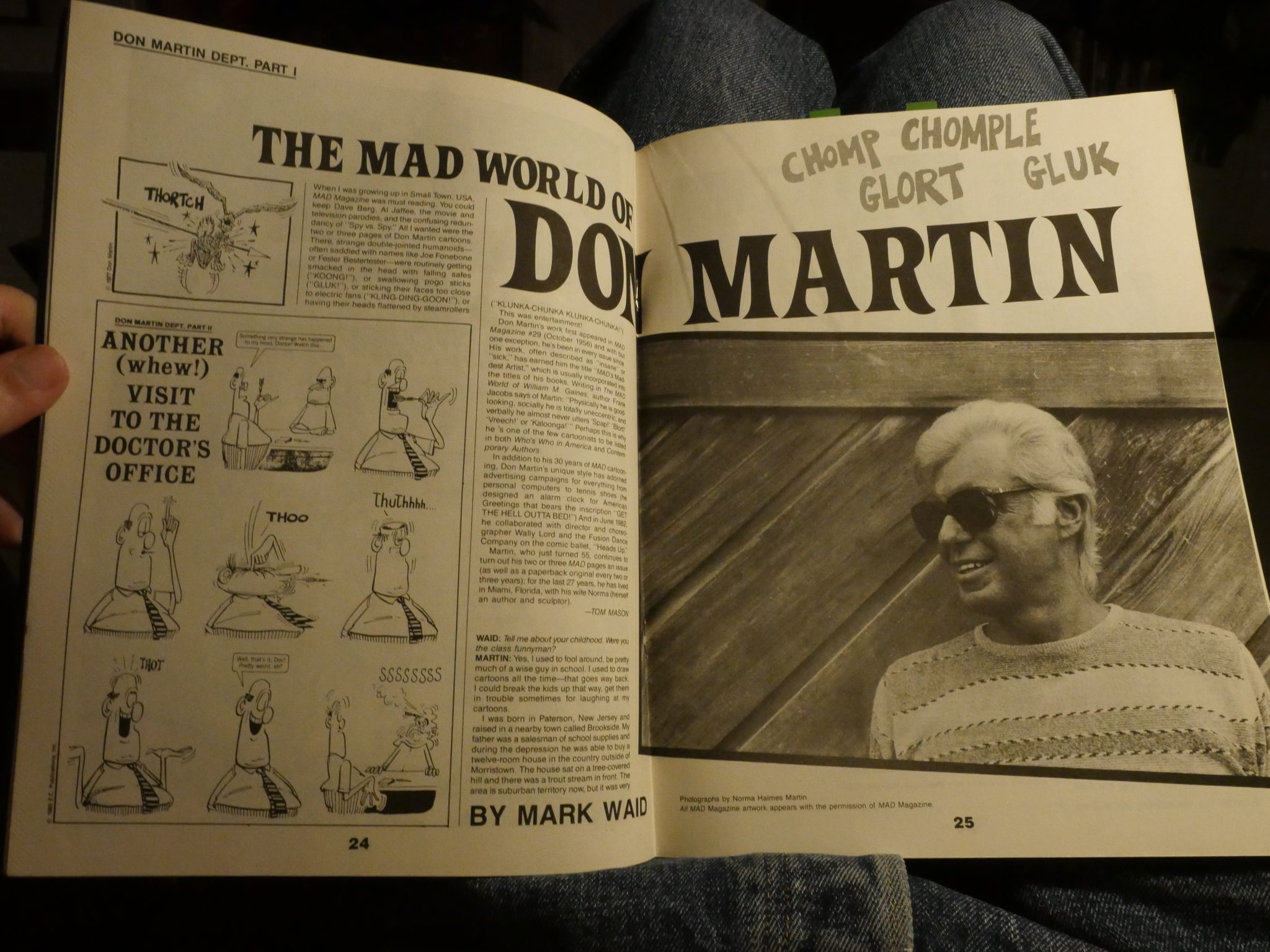 As I alluded to earlier, there’s a couple of interviews in each issue, which gives Honk! a magazine feel. The time it takes to read these dominates the reading experience slightly… but they’re good interviews. This one is by Mark Waid? Is that the comics writer? 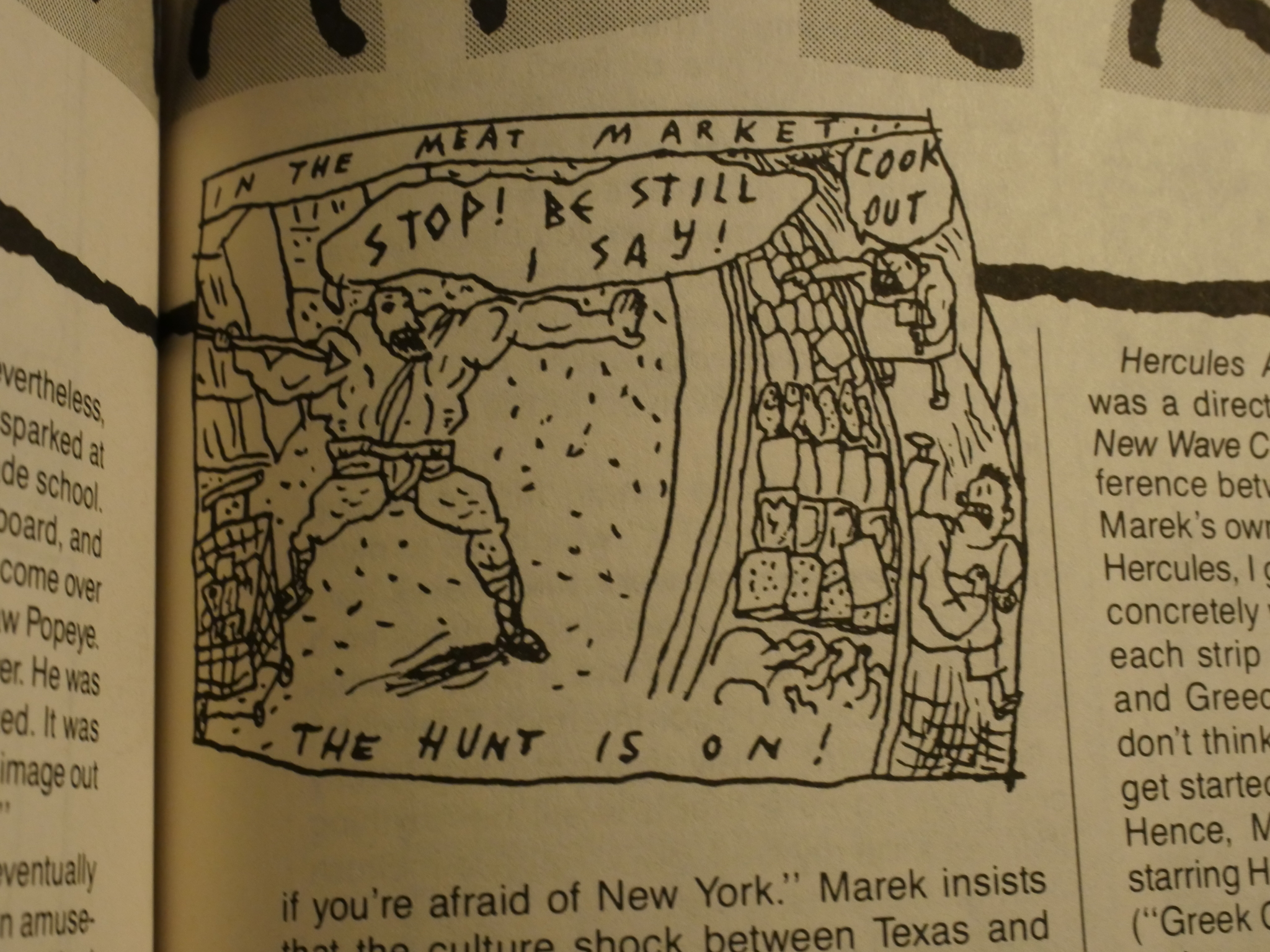 Oh! And a feature on the wonderful Mark Marek. I had forgotten that I wanted to see whether he had ever published anything other than the New Wave Comix book he did, which I inexplicably bought from somewhere when I was like 14…

Yes! I must have them all! Now! Yipes! Hercules amongst the North Americans was way expensive! Somebody should republish! Business idea! 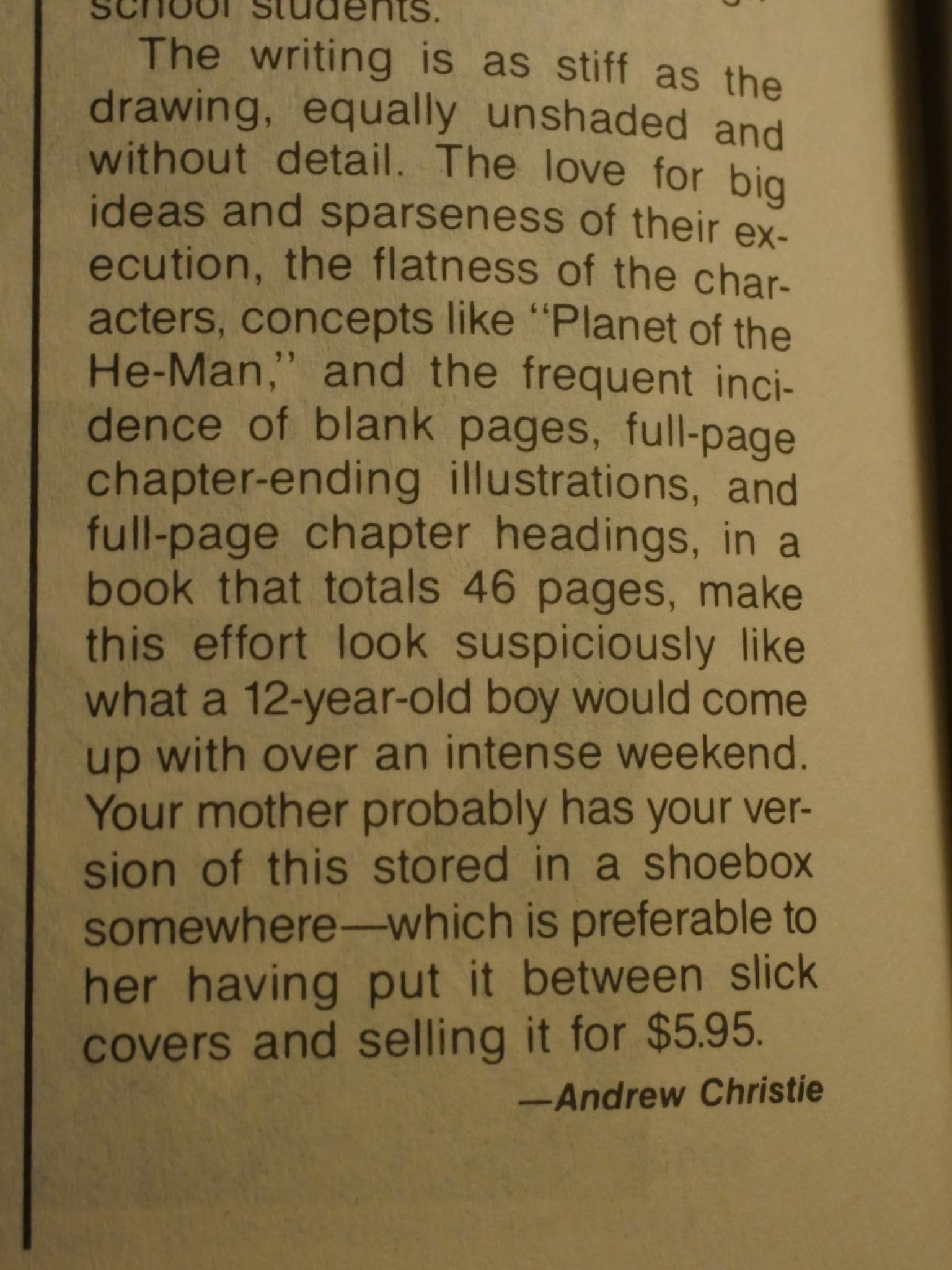 There are also reviews here. This one of The Adventures of Roberta by Munro Ferguson is so negative that it makes me want it. 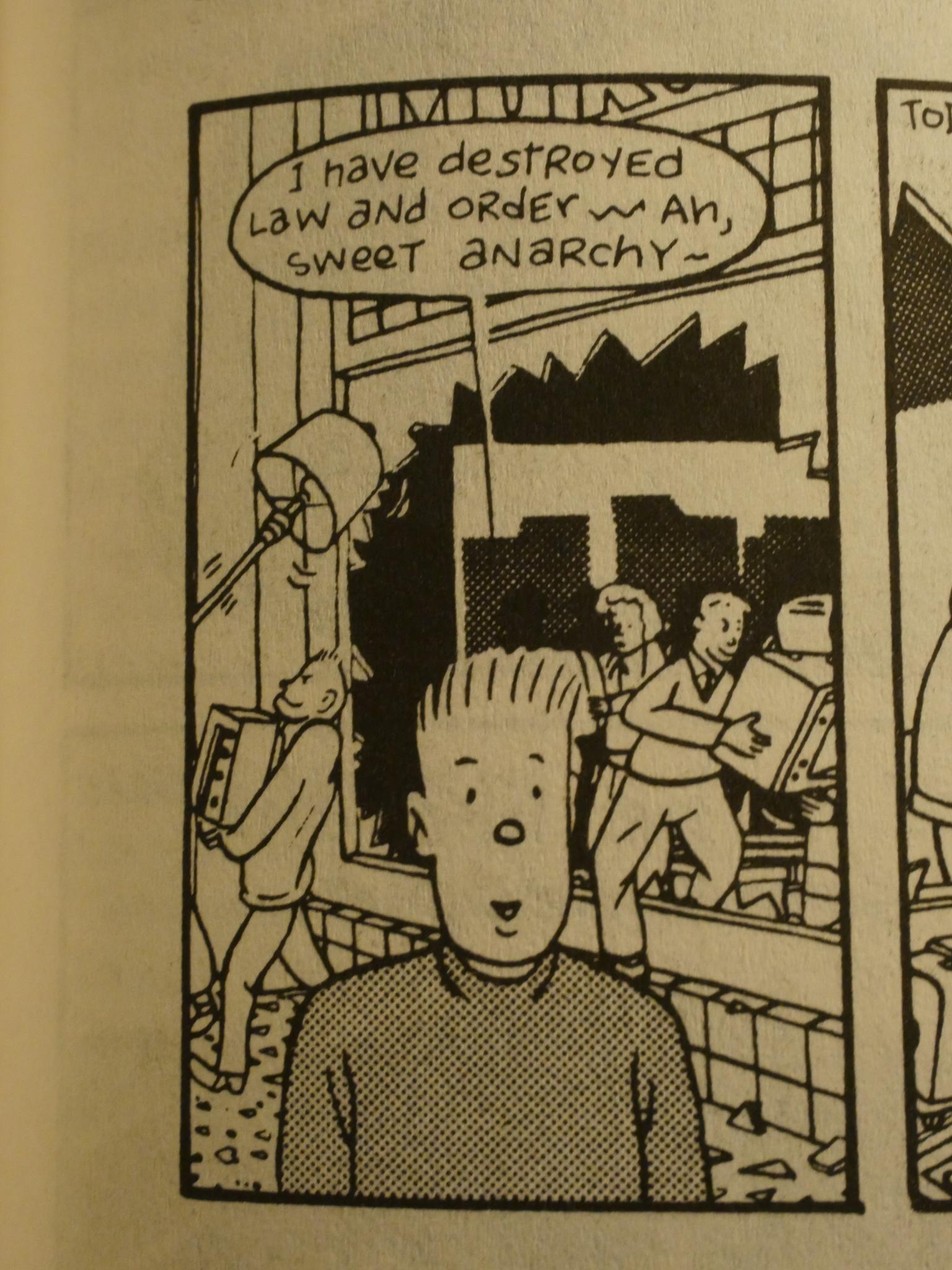 I love this panel to bits. (By Eddie Campbell and Phil Elliott.) Alan Moore regales us with tales of his childhood in a four page piece. And then! 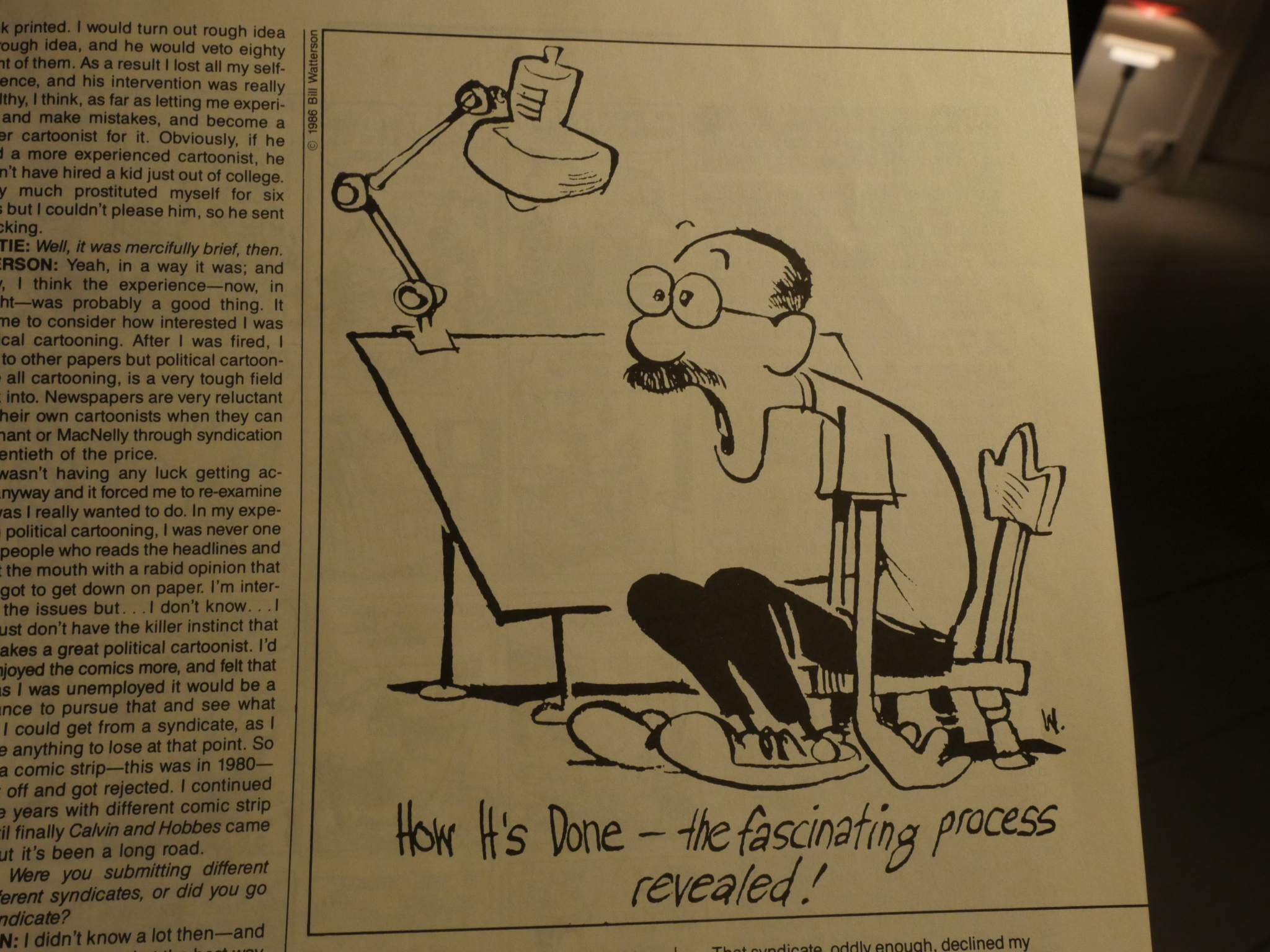 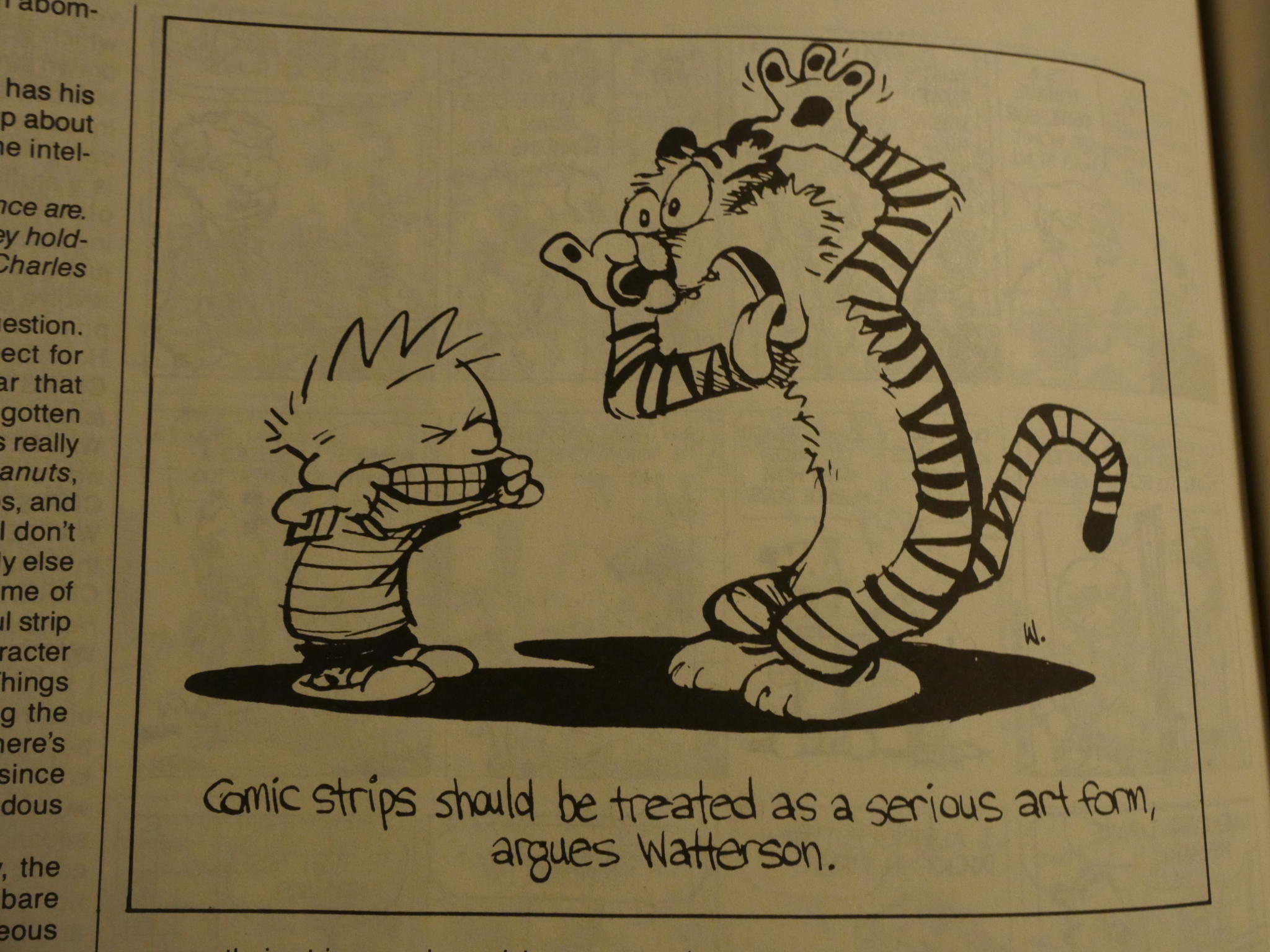 This is published in January 1987, so Watterson had only been doing Calvin & Hobbes for a year and a half. He seems to have put a lot of thought into the project and has amusing anecdotes about taking it around to various syndicates. (One of them suggested inserting a more merchandisable robot character they had, and Watterson refused and went to a different syndicate.)

And on the question of whether he sees himself doing Calvin & Hobbes forever: 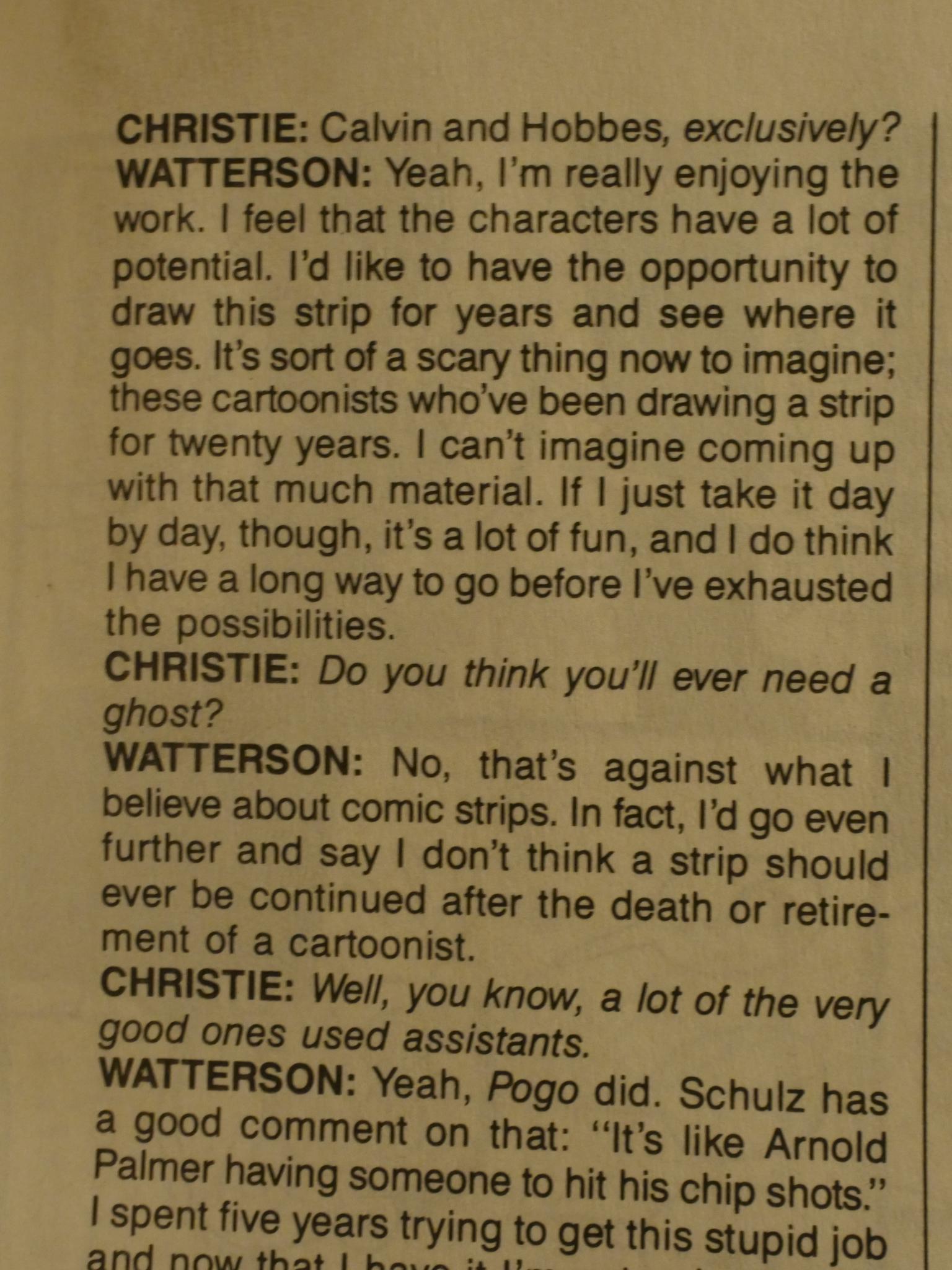 And in the end, he stopped the strip in 1995, so he had a pretty amazing grip on all this from the start. 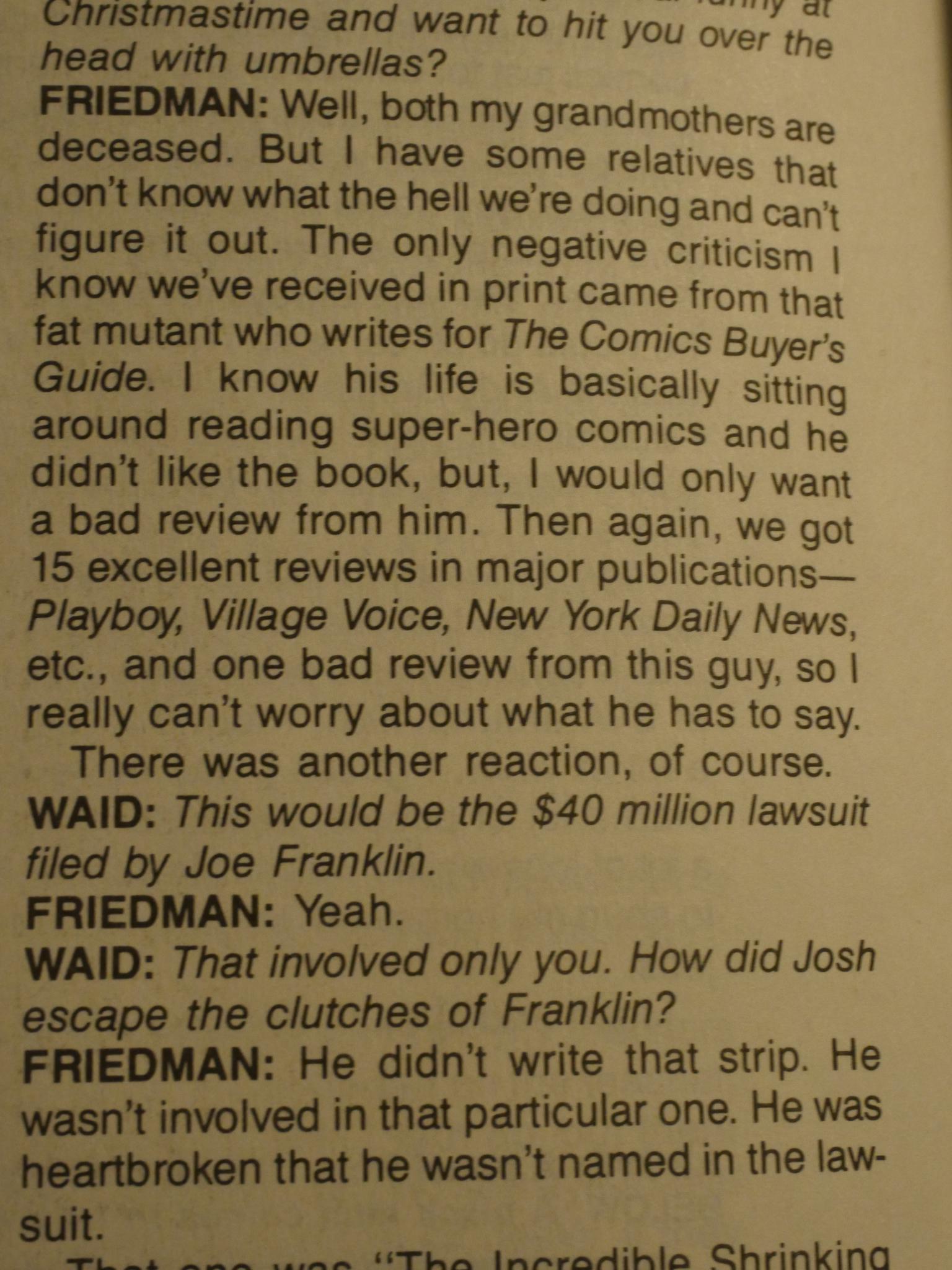 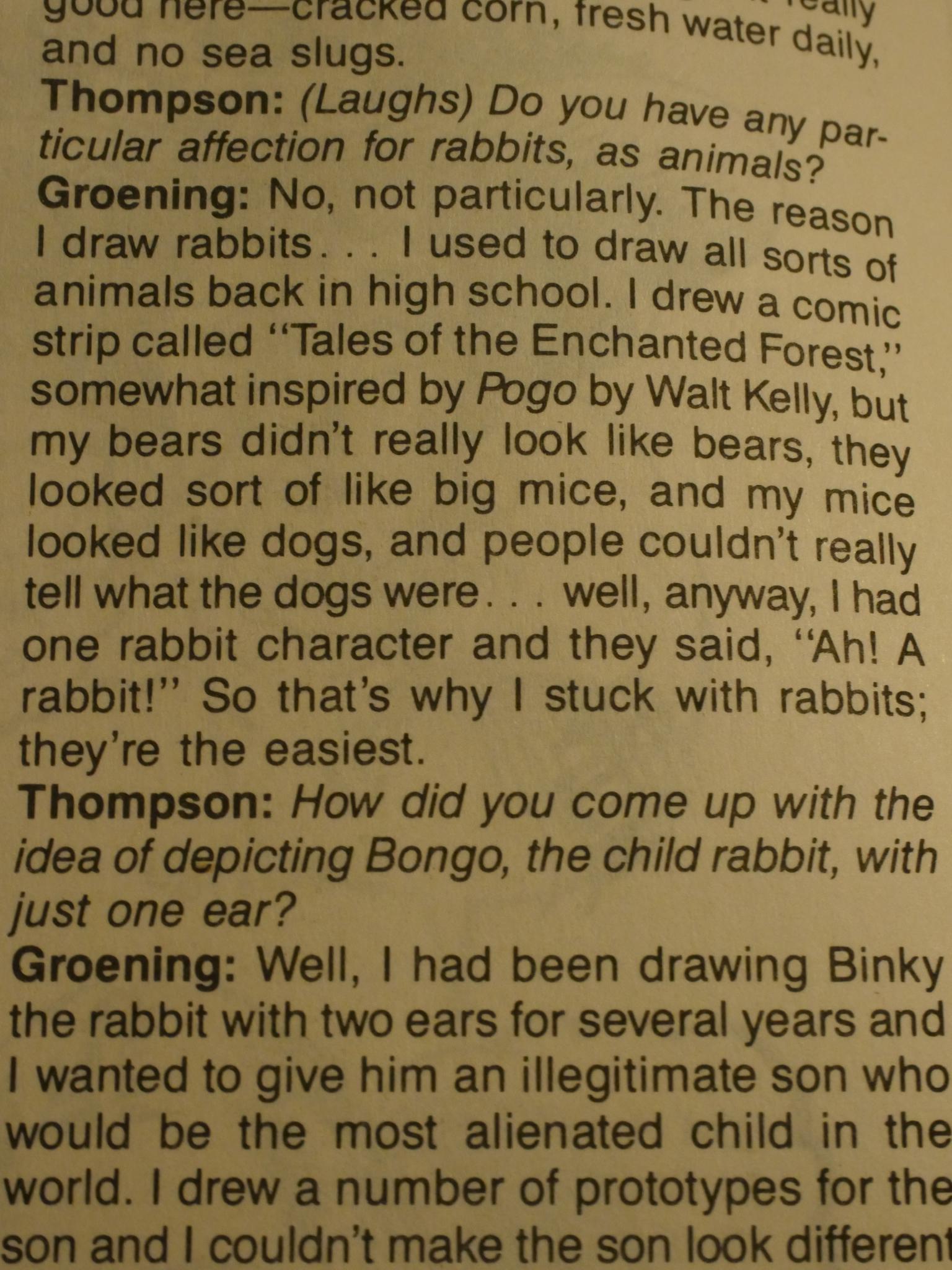 Issue tree has an interview with a pre-Simpsons Matt Groening, so it’s all about the wonderful Life in Hell strip. He amusingly enough says later on that he hopes that Life in Hell will earn him enough money for him to work on various undisclosed side projects. Instead Life in Hell became the side project, but that’s life. 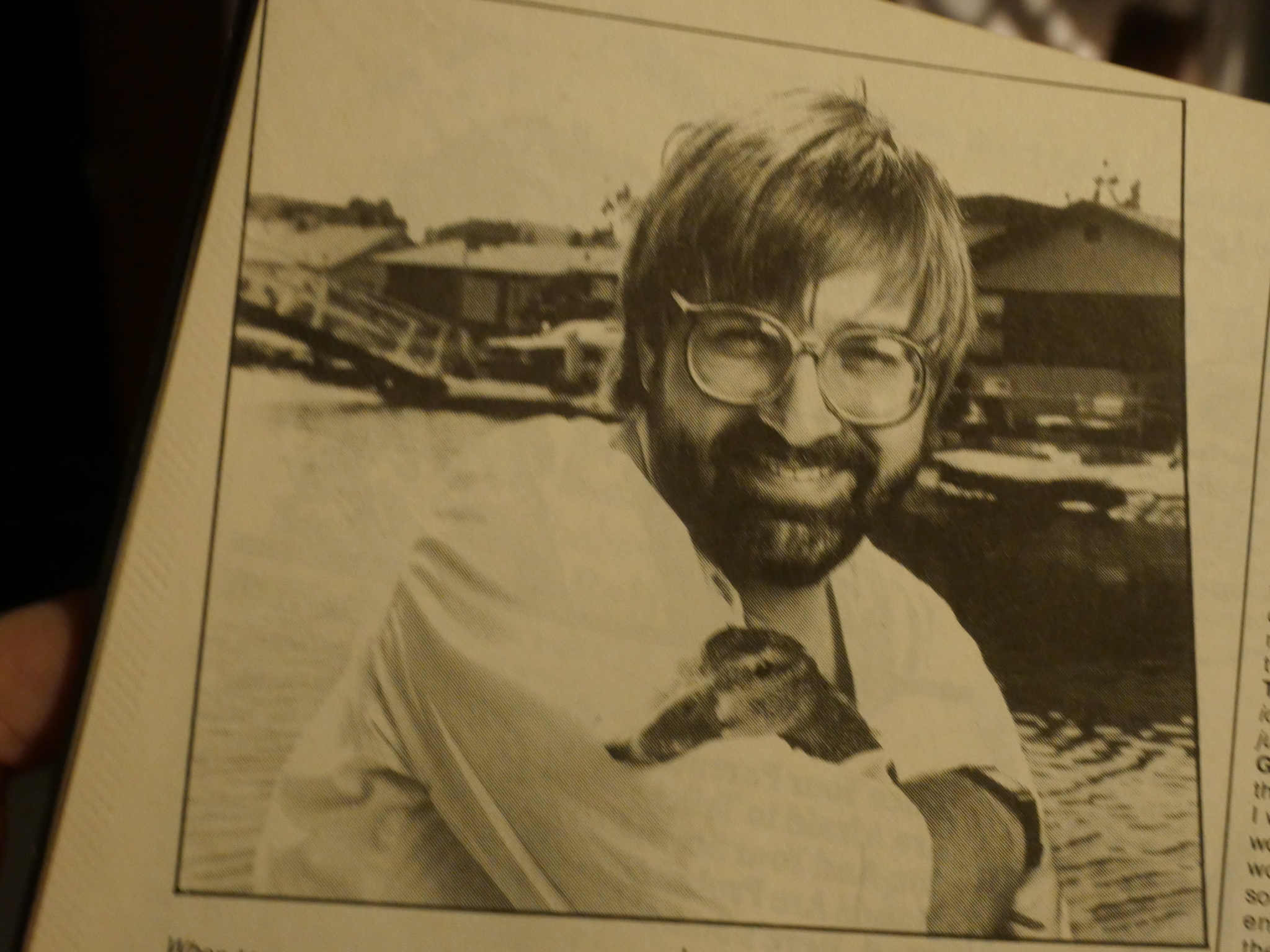 Groening with one of the ducks that live in his backyard. 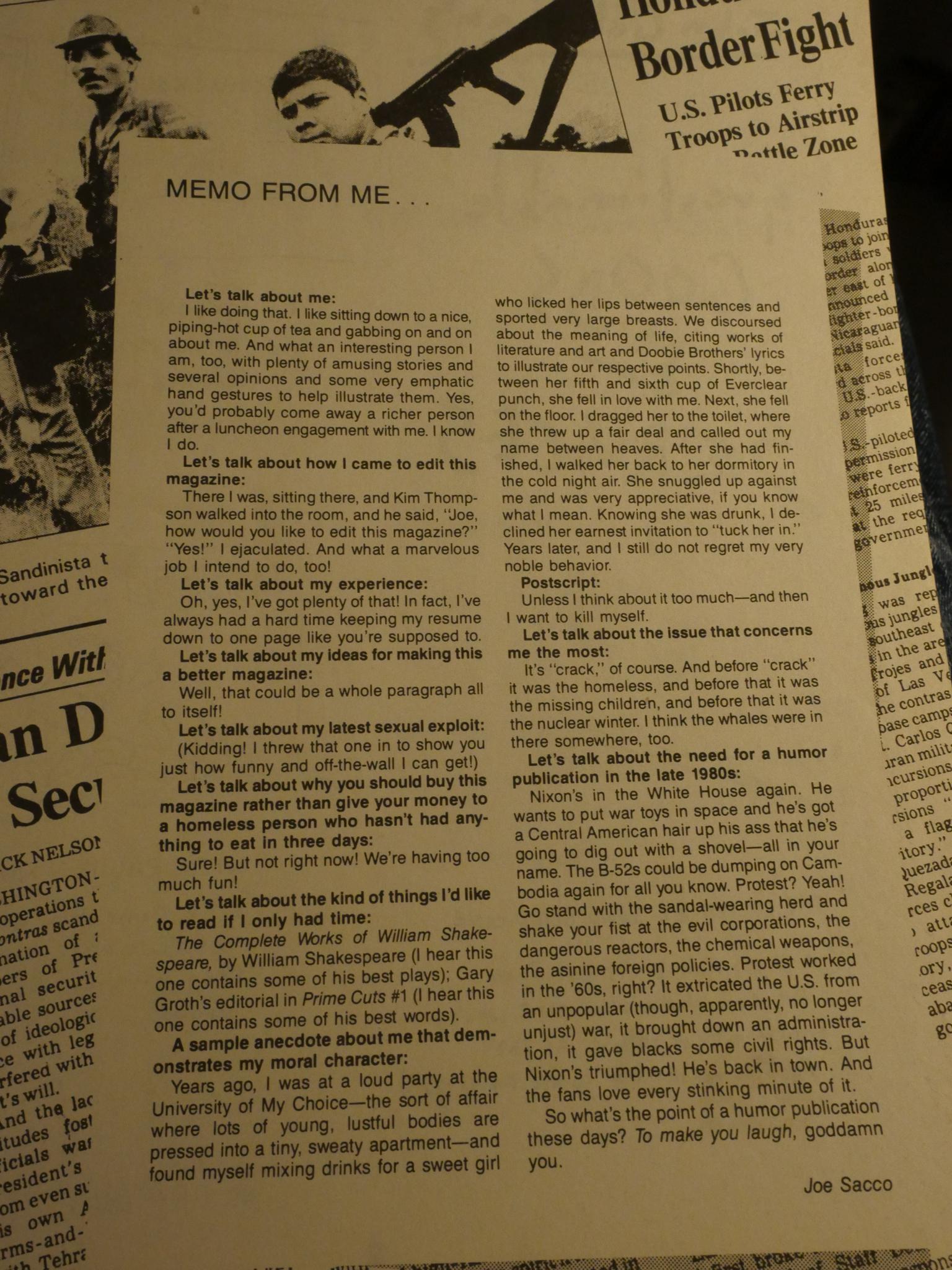 With issue four, Honk! got a new editor, Joe Sacco (who would later go on to become the famous war journalist cartoonist). 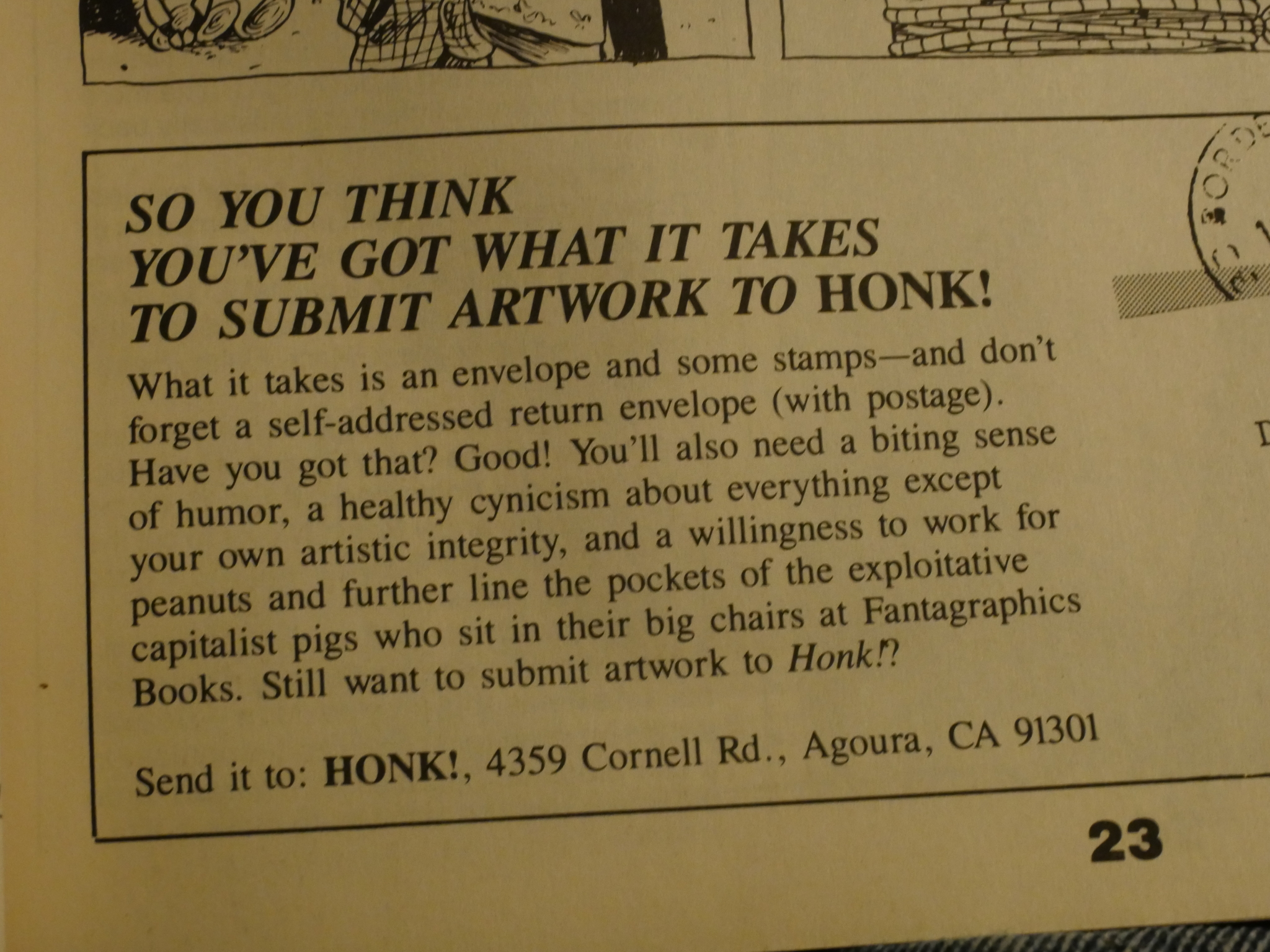 I found it somewhat interesting that he put out a call for new contributors, and I think Honk! changed in character a bit from his first issue. Slightly less staid. And stuff like this from John Callahan: 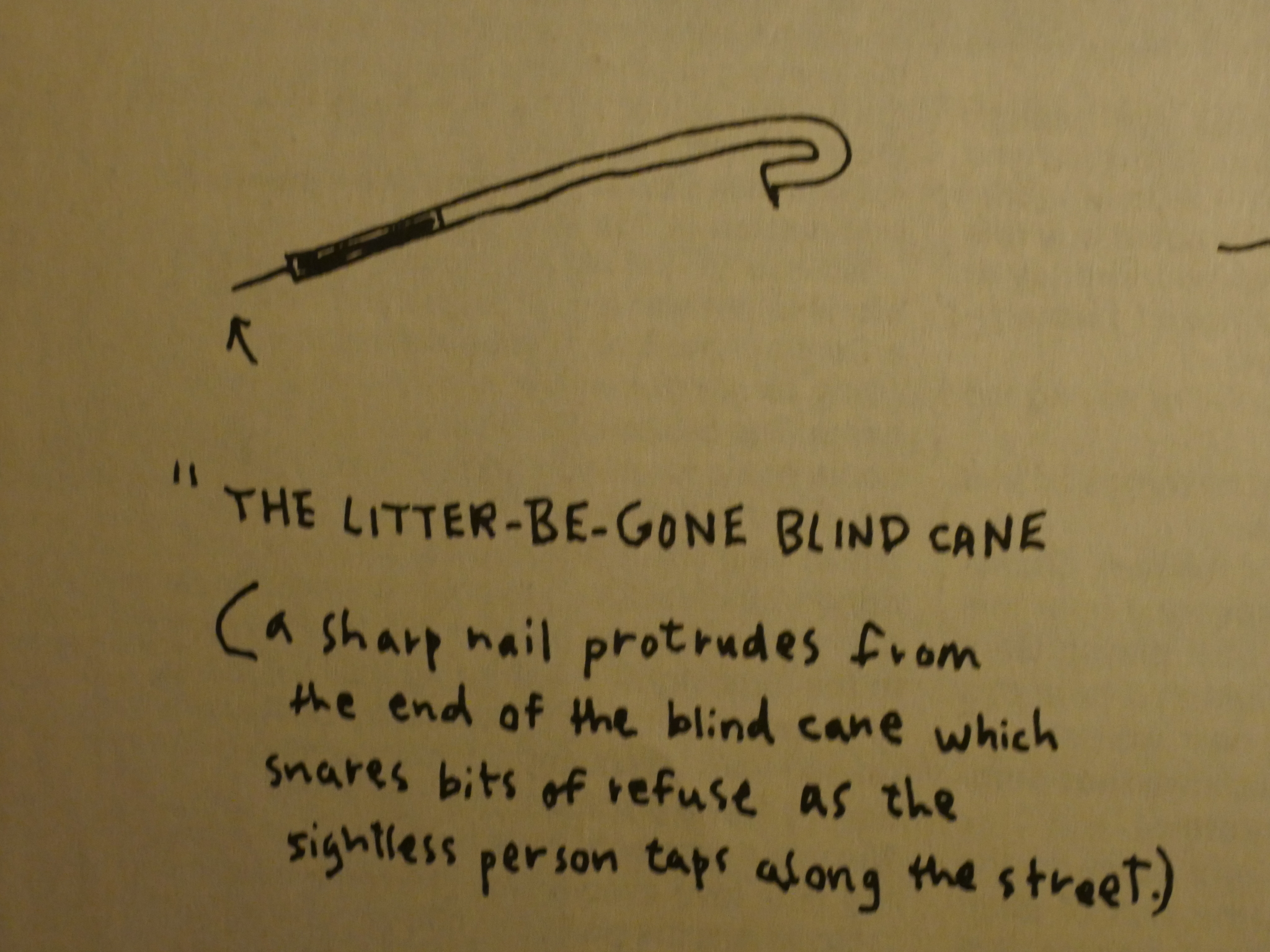 And the interview is in “feature” style (answers to questions intervowen in between the journalist’s writing) instead of the preferred Comics Journal style (question/answer transcript). Sacco would revert to the “transcript” style in all subsequent interviews, though. In the fifth issue, Sacco announces that the magazine will change its name to Centrifugal Bumble-puppy (from Brave New World by Aldous Huxley) because, er, he didn’t like it, I think… That’s a pretty brave new magazine title. The main interview in the final issue is with Bill Griffith. Zippy had recently gone from a weekly strip to a nationally syndicated daily strip, and Griffith explains the audience difference. One other interesting bit here (for me, at least) is that it sounds like a Zippy movie, produced by Michael Nesmith, was a done deal? Diane Noomin and Griffith were just going to polish the script a bit, but otherwise it was definitely going to happen? Research team! Research! Stat! Well, on that sad note… another sad note: The reproduction on many of these pieces is atrocious. Especially the stuff reprinted (like this Campbell/Elliott thing that originally ran in the Sounds magazie) approaches illegibility more often than you’d prefer.

But all in all, I’d say the magazine is a great success. I mean, as a reader. It’s a fun, well-balanced, fulfilling reading experience. It’s perhaps a better read as it was originally published than in one evening as I did just now.