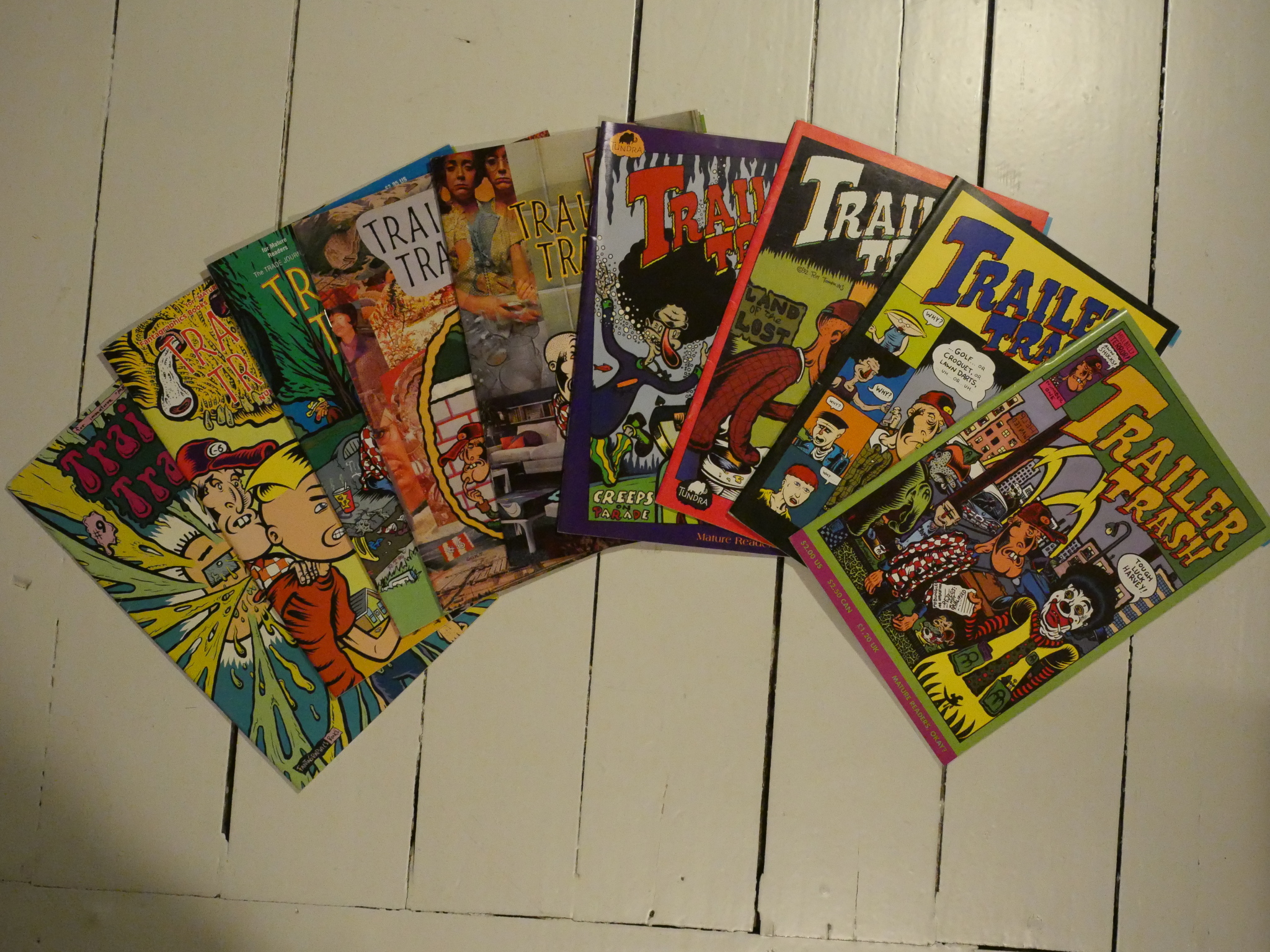 If you were to rifle through Trailer Trash, you would probably assume that this was going to be a book of nihilist violent gross-out fun like, say, Angry Youth Comics. 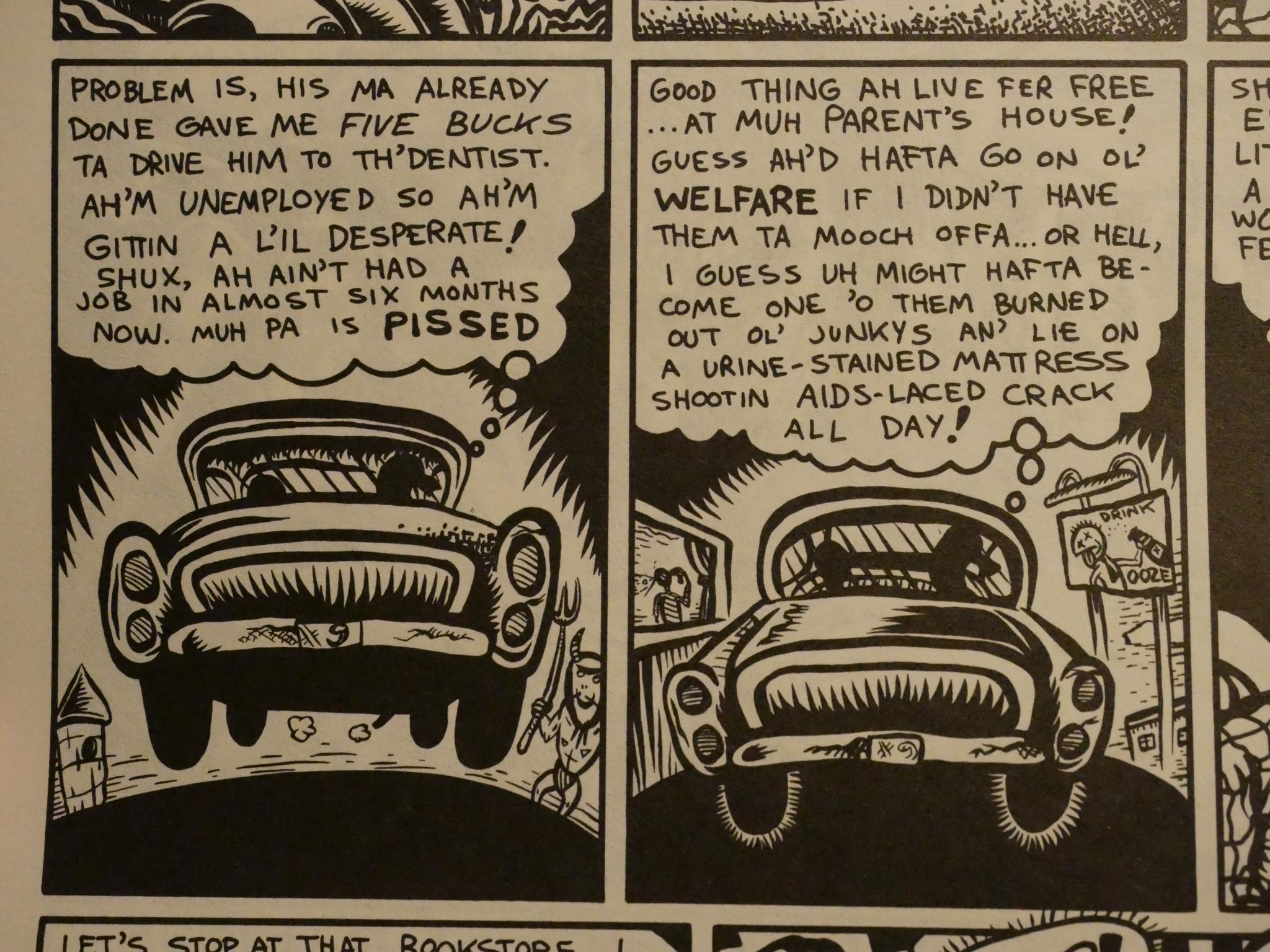 The internal monologues from the viewpoint characters keeps on coming, which seems rather outdated these days, I guess: Every motivation every character have are spelled out. 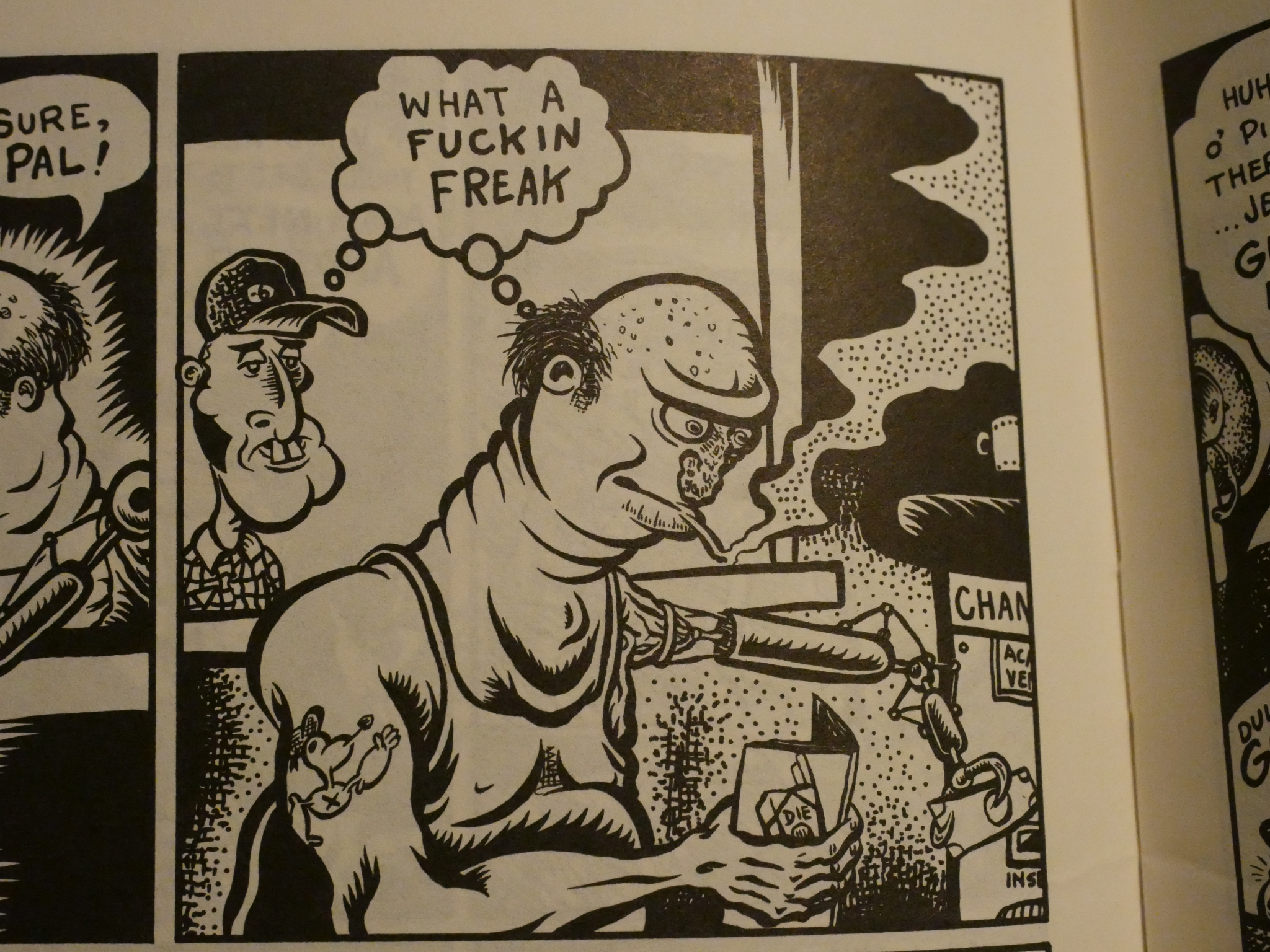 The character design is incredibly strange. 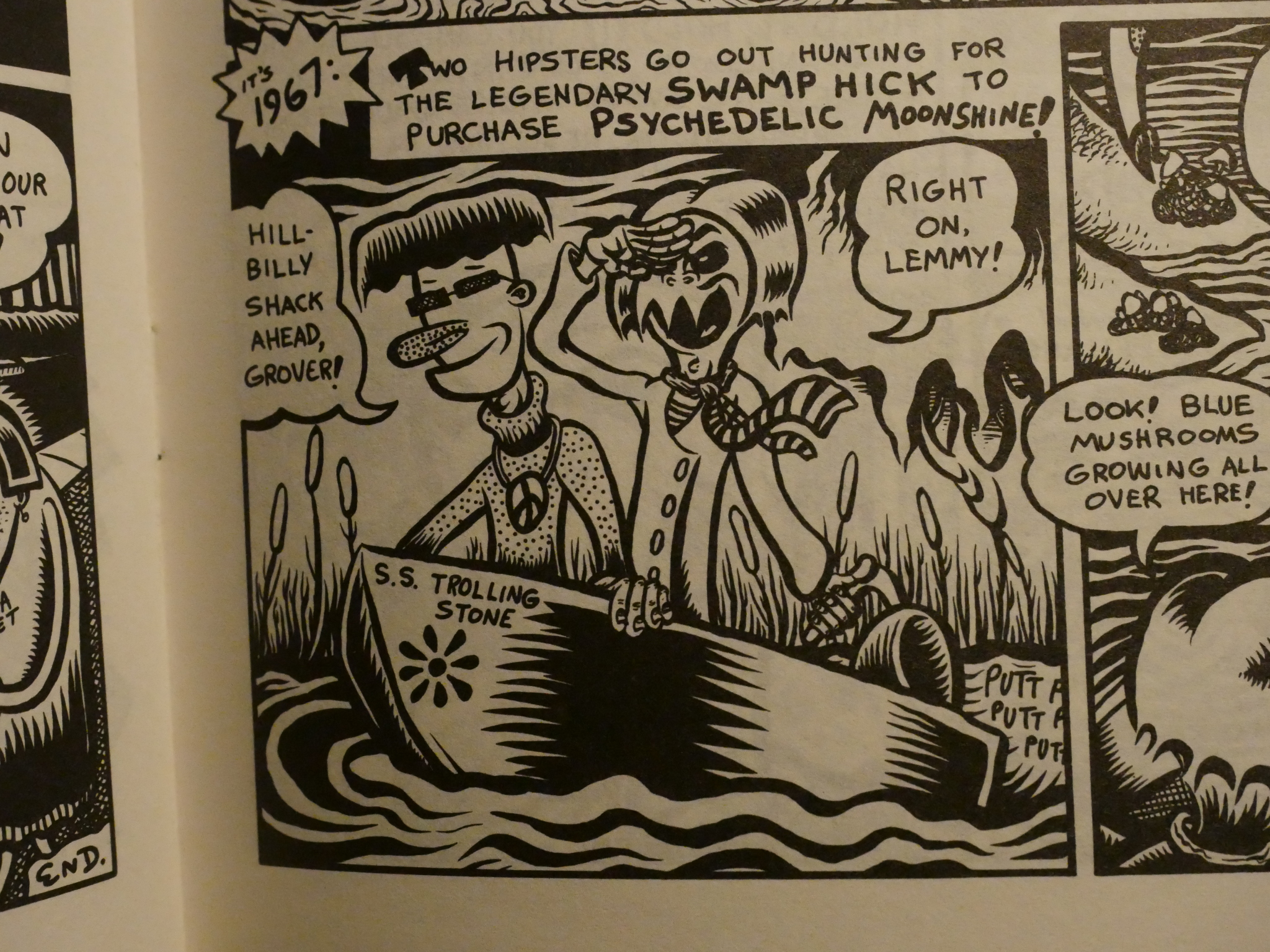 These characters aren’t presented as looking freaky or anything. They just look this way, and nothing is said about it. Reminds me a bit of Crap, which was also published around this time. Perhaps something in the air. 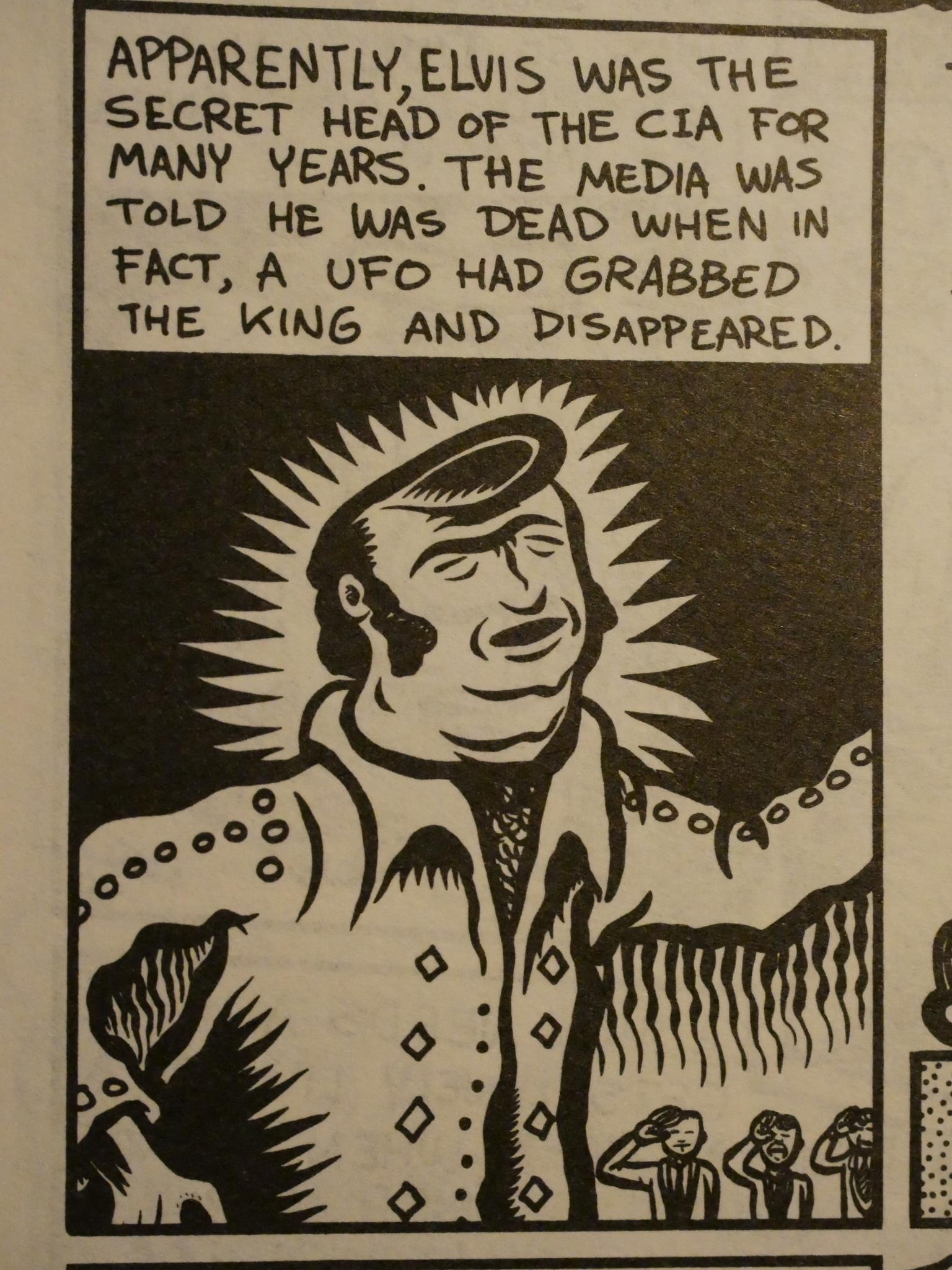 And, of course, since this is a comic with hillbillies, you have conspiracy theories about Elvis.

So this is really what it seemed like? A wild and woozy nonsensical single author anthology as it looks like? 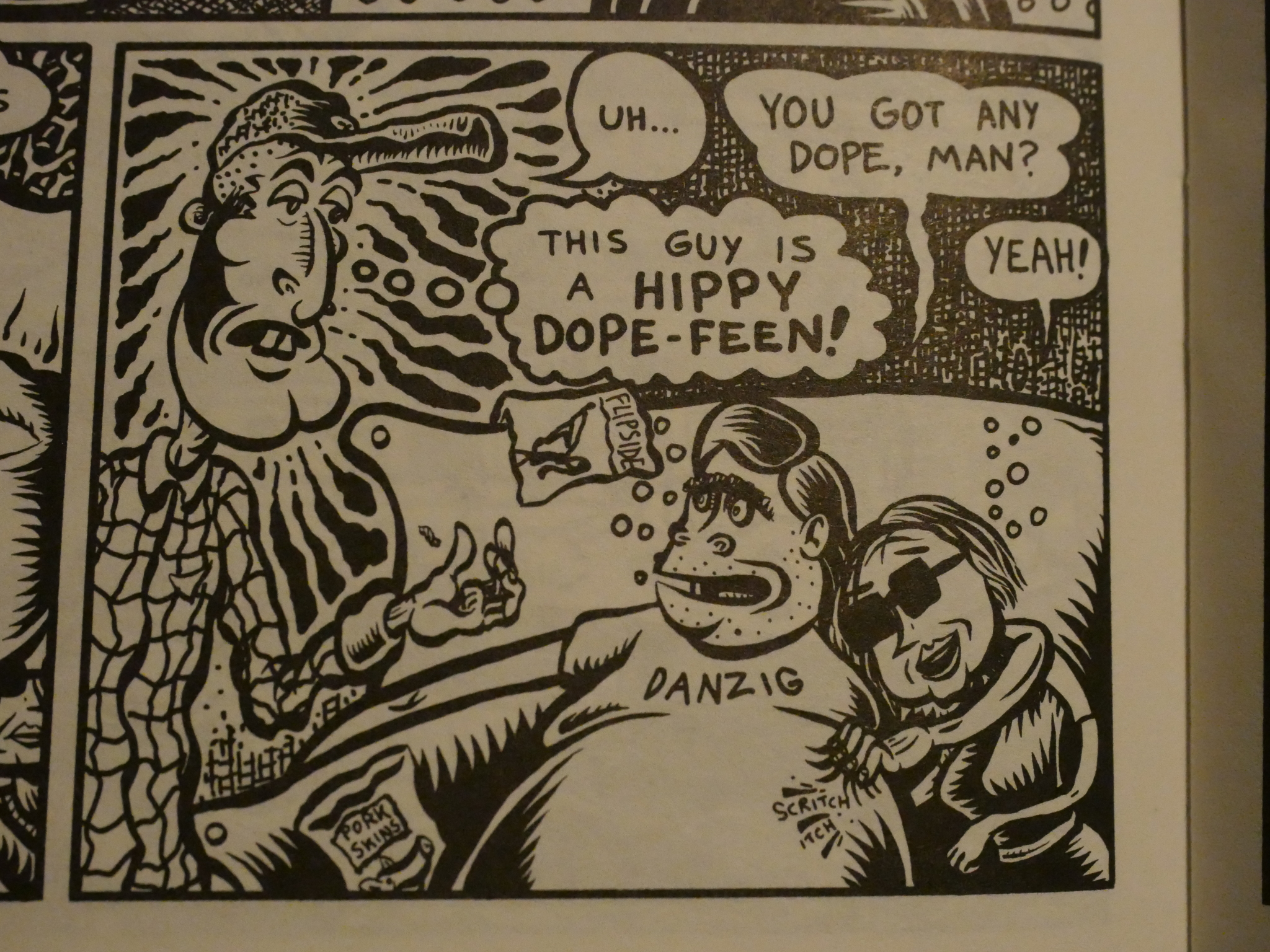 No. It’s a coherent, traditional story of Harvey (to the left up there) who is a rather shy, and rather dim, fellow who has a crush on a girl and hangs out with his slacker friends. It’s way, way more Hate than Schizo.

This disconnect between the bizarre way it looks and the traditional way it reads doesn’t work in Tompkins’ favour. 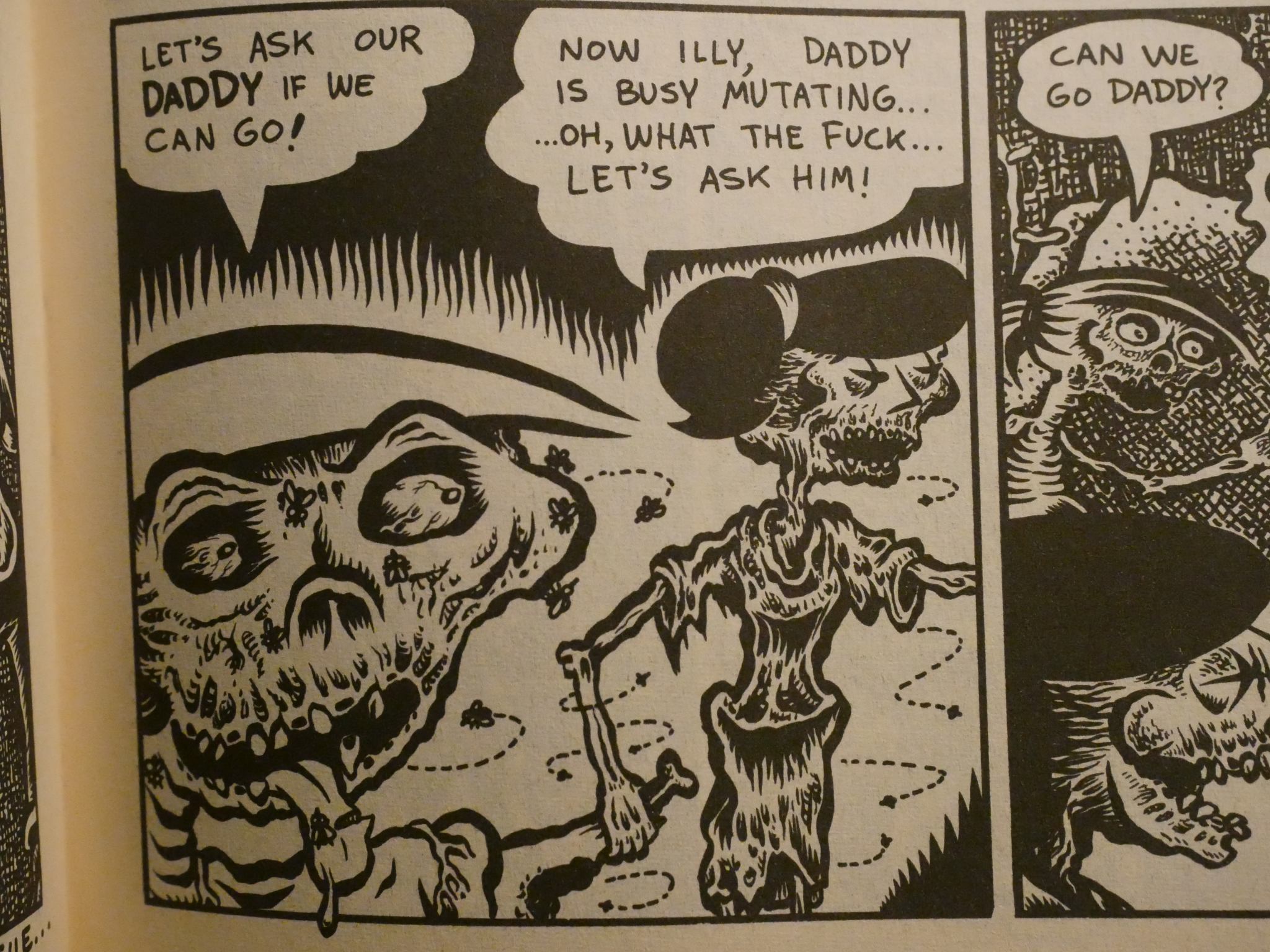 There are some bizarre shorter pieces in the first few issues that don’t have this problem, though, but they soon make way for all-Harvey issues of moping around and getting drunk and arguing with parents. 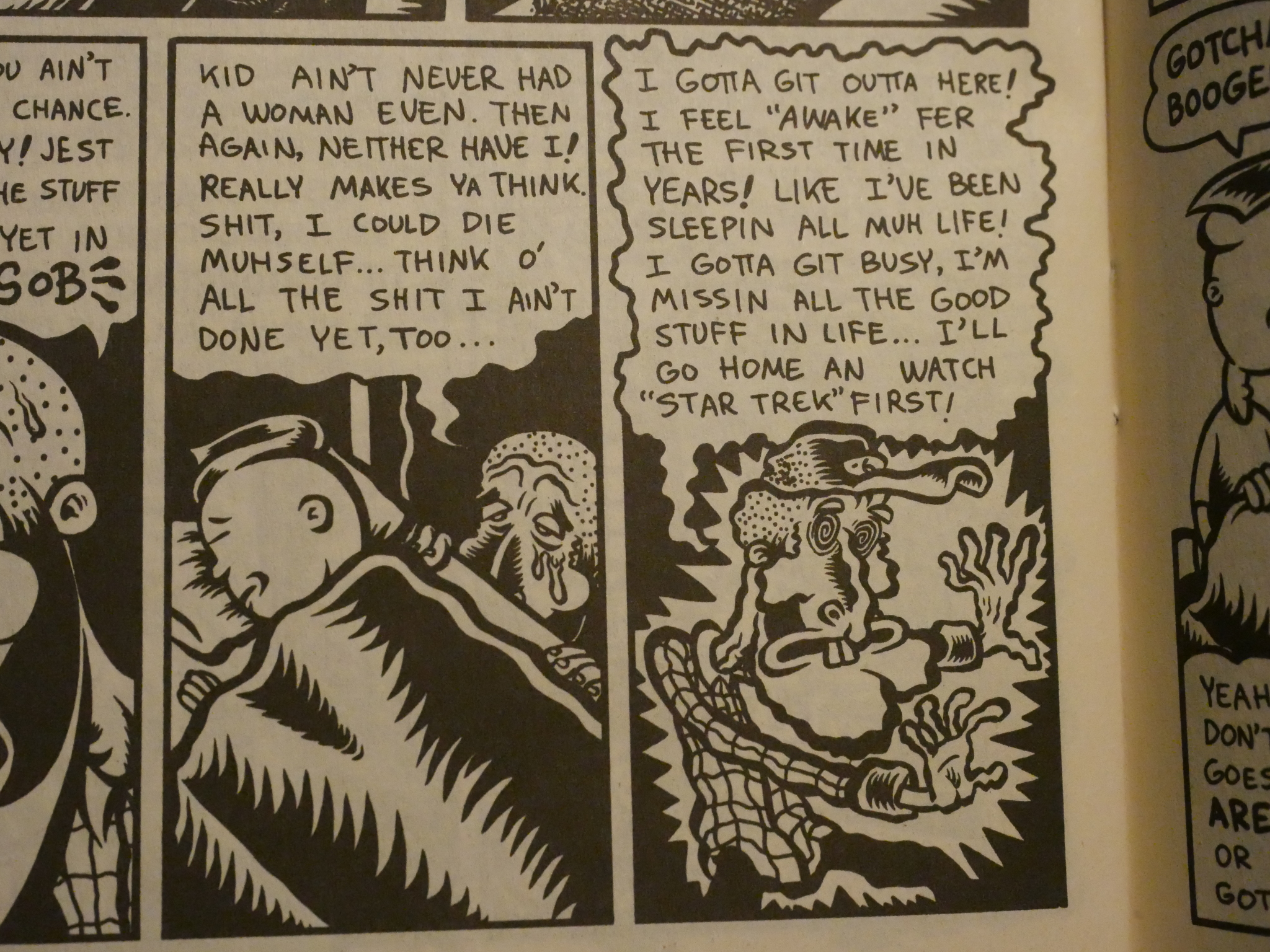 Harvey is basically a decent, moral kind of guy, but he’s so feckless that it’s rather hard to get any momentum built up, story wise.

There are other characters that have intersecting storylines with Harvey that are more propulsive, like that drug dealer who has a necrophiliac downstairs neighbor, so it’s not all like this, but the prevailing feeling is one of a 90s tv drama. 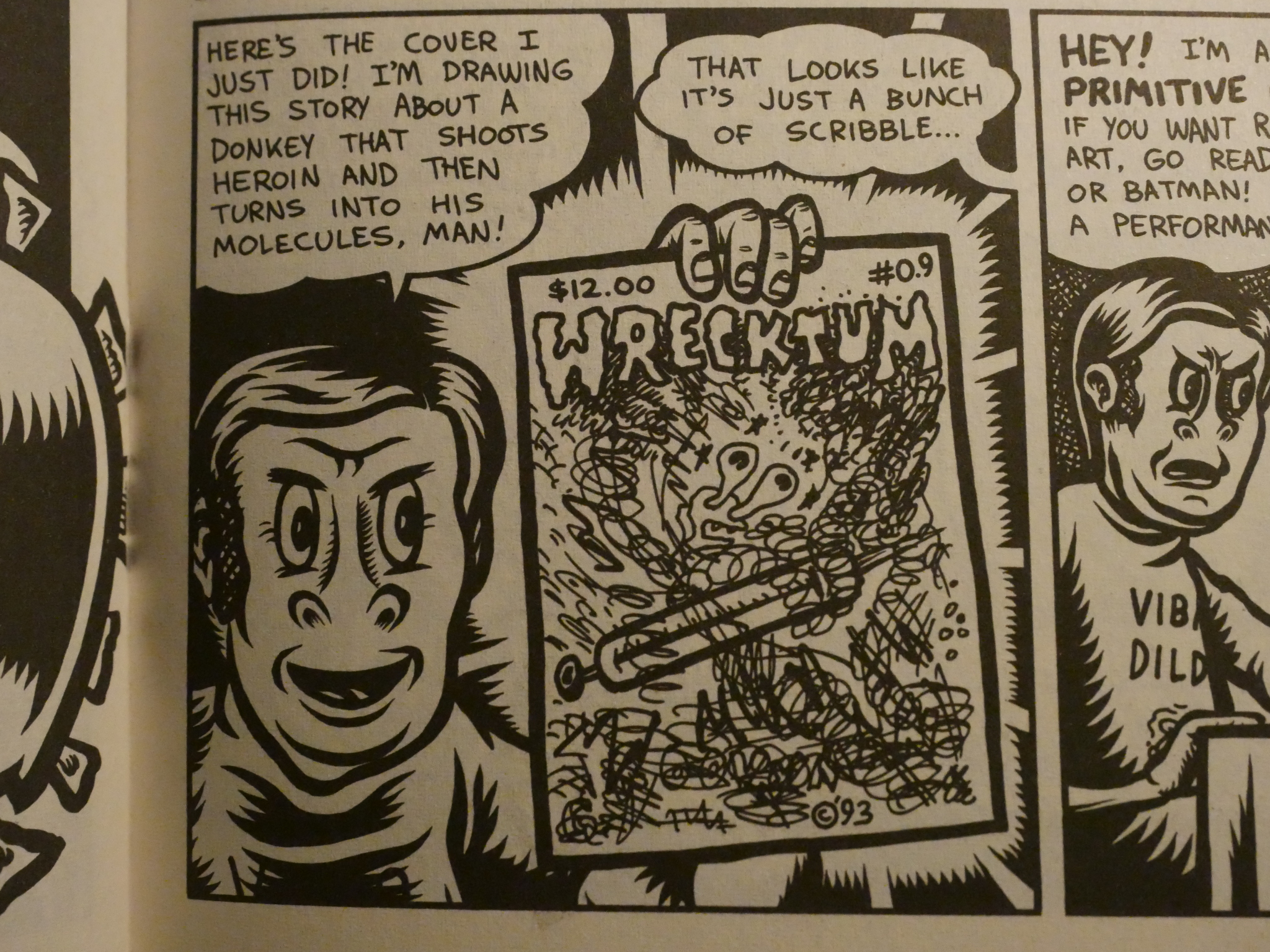 The artwork is obviously very much influenced by Charles Burns. Not layouts or character design, but his linework is a dead ringer.

And predictably enough for someone who obviously puts so much work into his shading, he finds time to, er, critique other, lazier comic book artists. 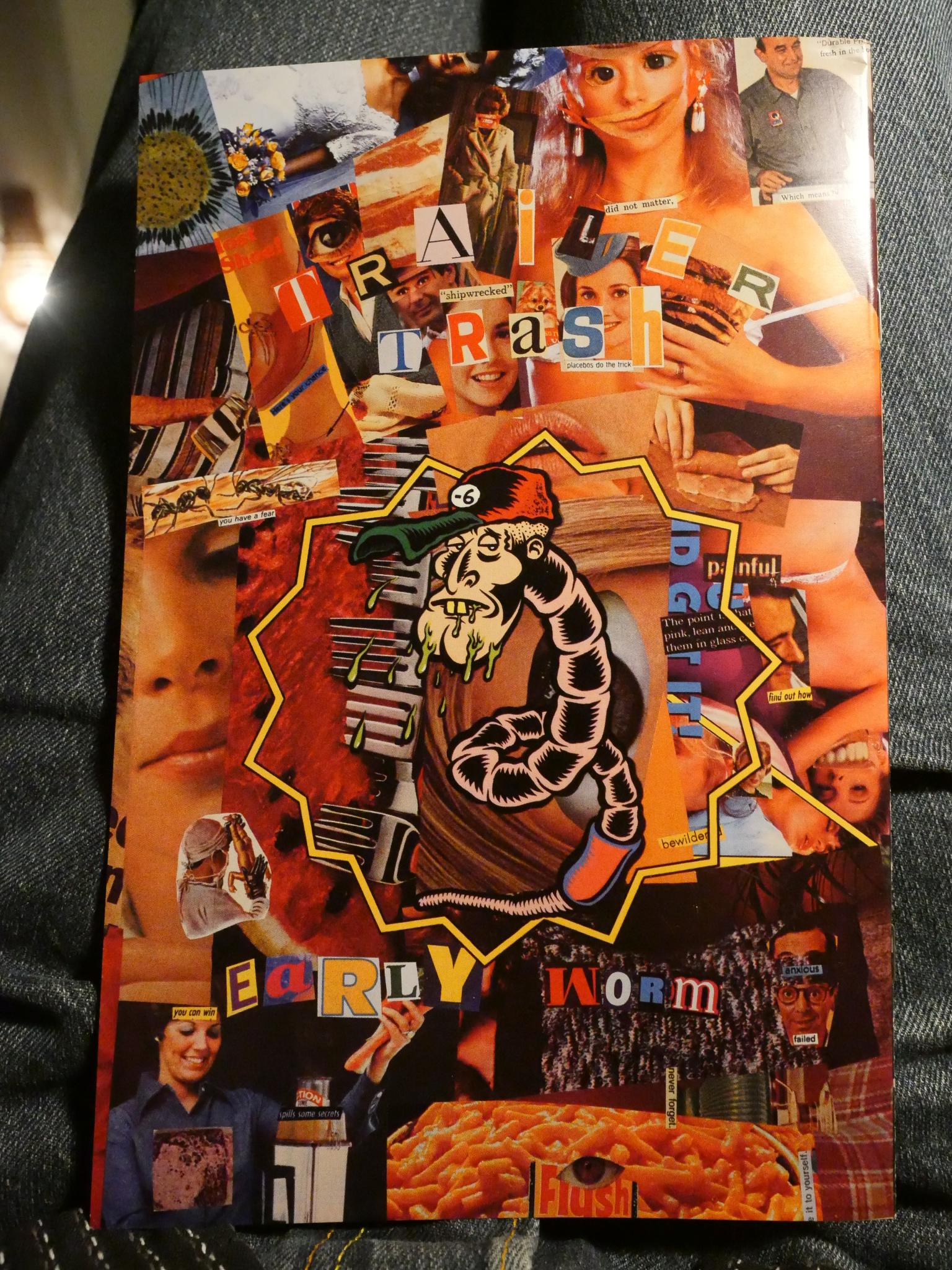 Several of the back covers feature these slightly porny collages. 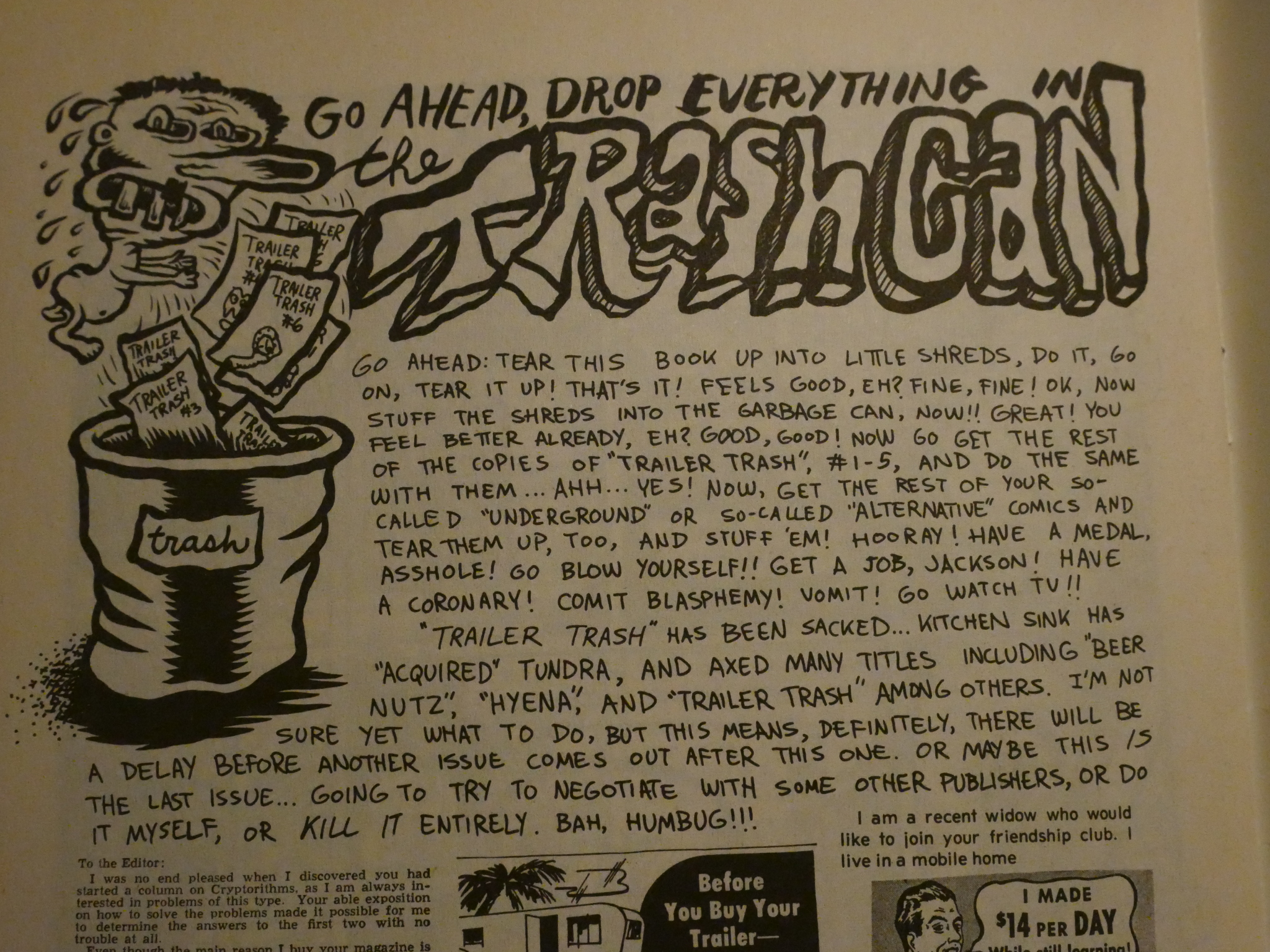 Oh! I forgot to mention that the first six issues weren’t published by Fantagraphics, but by Tundra. And scrolling all the way to the beginning of this article is too much work. Obvs.

In 1993, Kevin Eastman, owner of the money hemorrhaging Tundra comics, paid Kitchen Sink to take over, and the first thing Kitchen did was ax all the titles that were losing money hand over fist. (Officially Kitchen bought Tundra, but I think that summary is accurate; it’s all based on rumours of what really transpired.)

Trailer Trash was one of the casualties, but Tompkins announces that he’d be looking for a new publisher. 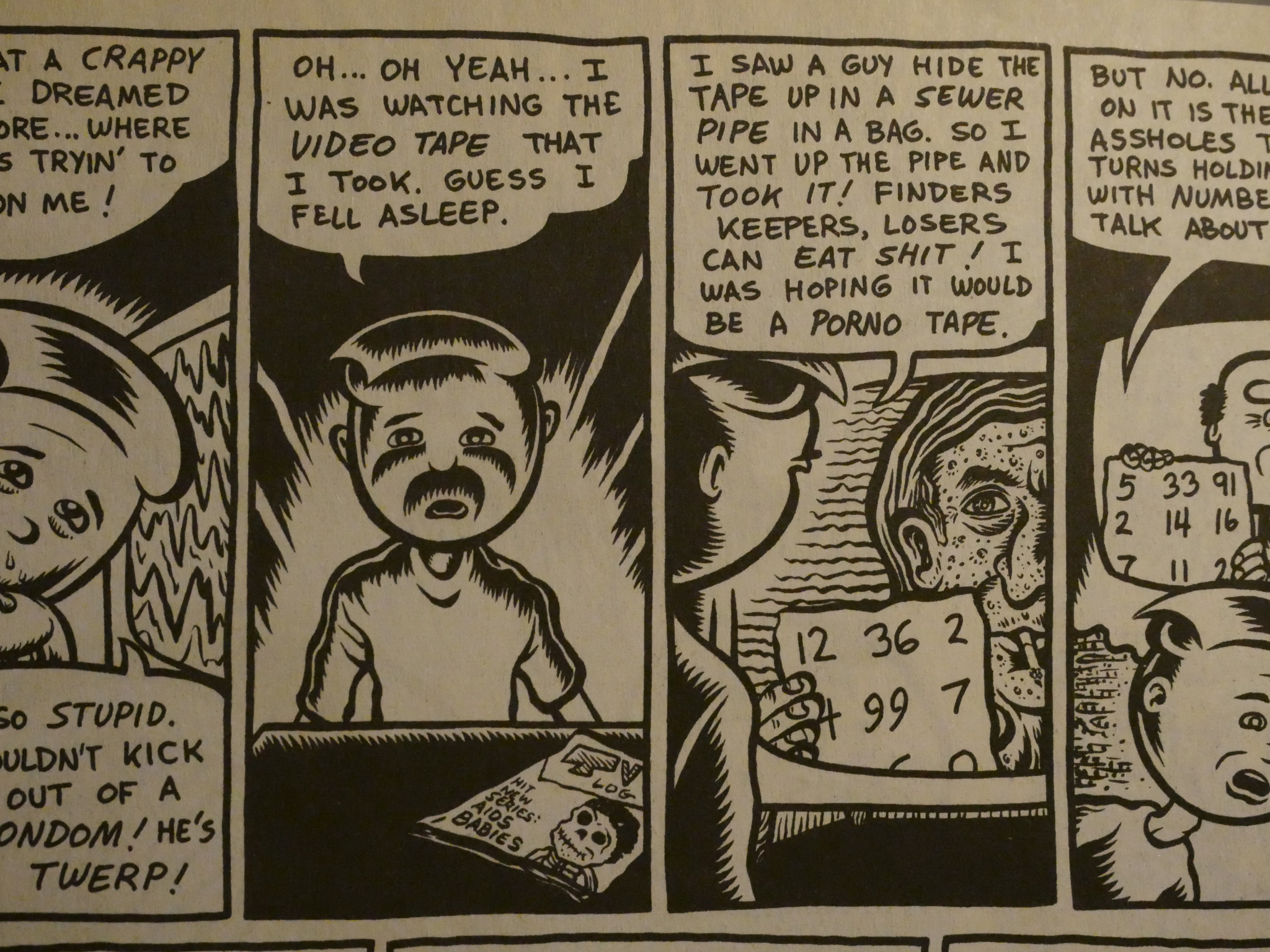 Fantagraphics took over with the seventh issue, three years later. Tompkins’ art style has changed a bit, but not dramatically.

The story continues from where it left off, and the characters do their wordy as-you-know-Bobs to bring new readers up to speed. 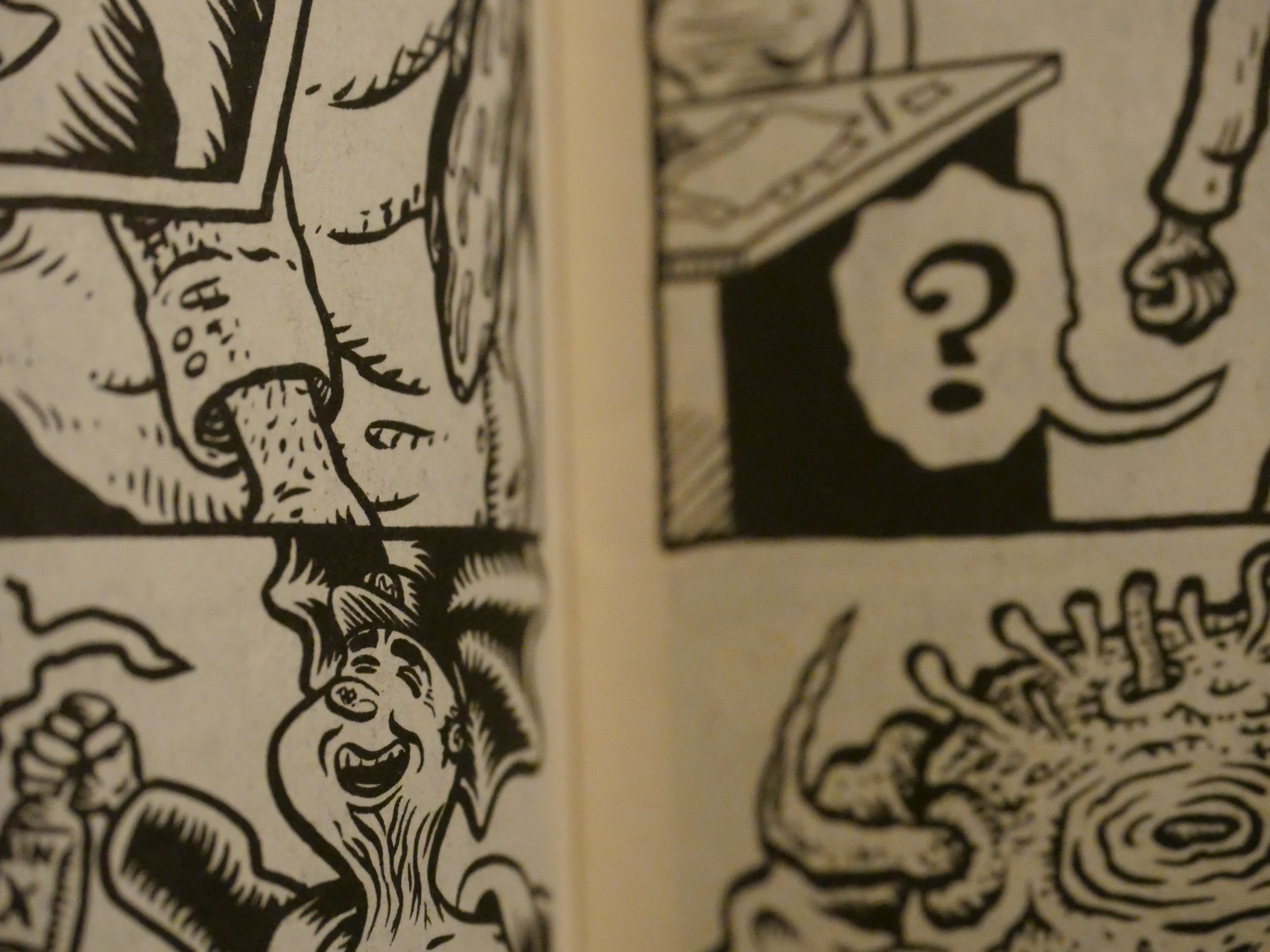 The eight issue is odd in several ways: Eight interior pages are on newsprint, and the other sixteen are on white paper. I’m assuming a printing error. 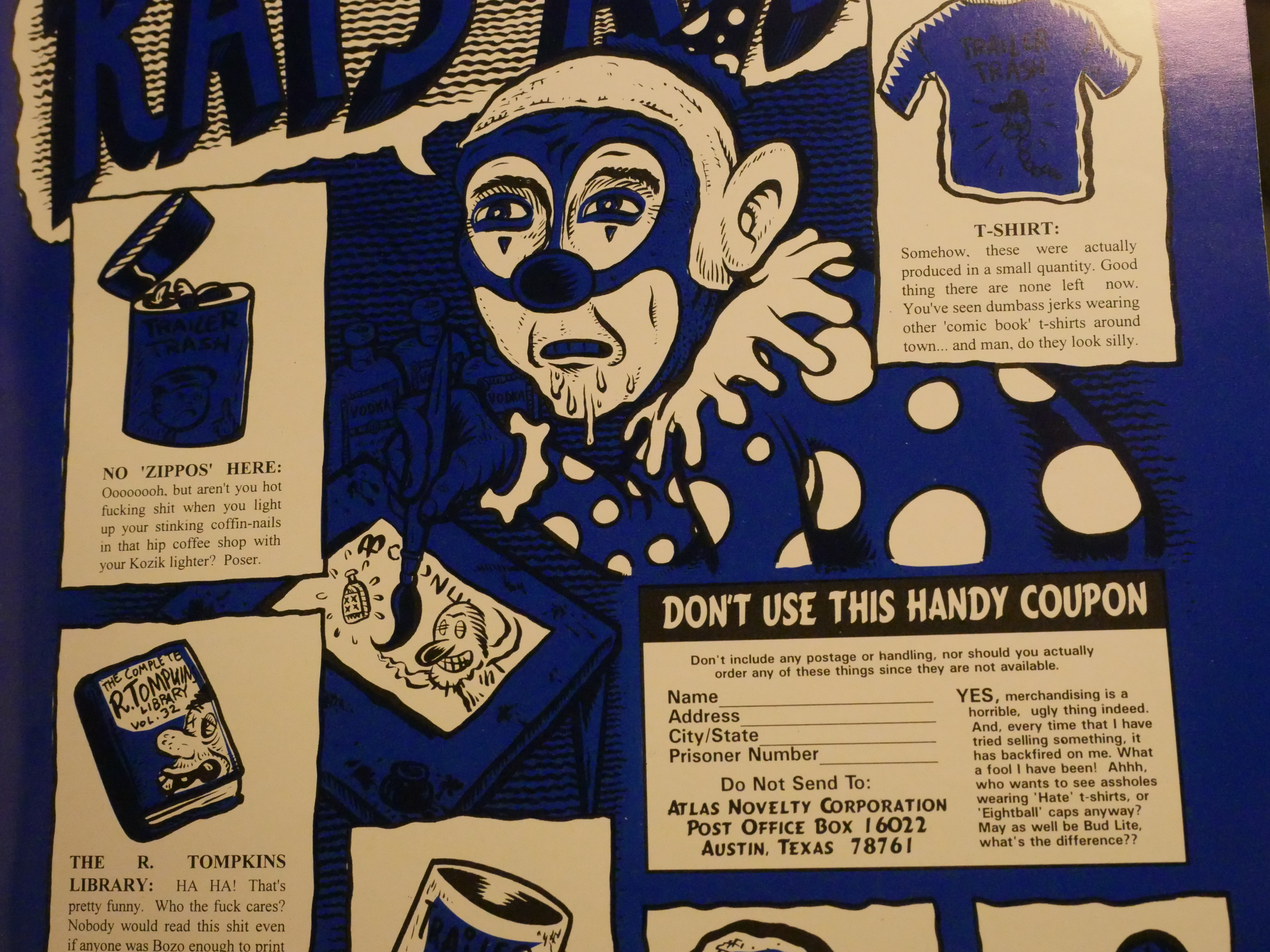 But it’s also the only issue to have colour printing on the inside covers, and Tompkins uses it to throw shade on such commercial sell-outs as Hate and Eightball, also published by Fantagraphics.

The storyline of the issue also diverges from the usual slacker shenanigans, and instead tells the story of one of the kids, and it’s about drugs and sexual abuse. Much heavier than the earlier issues. 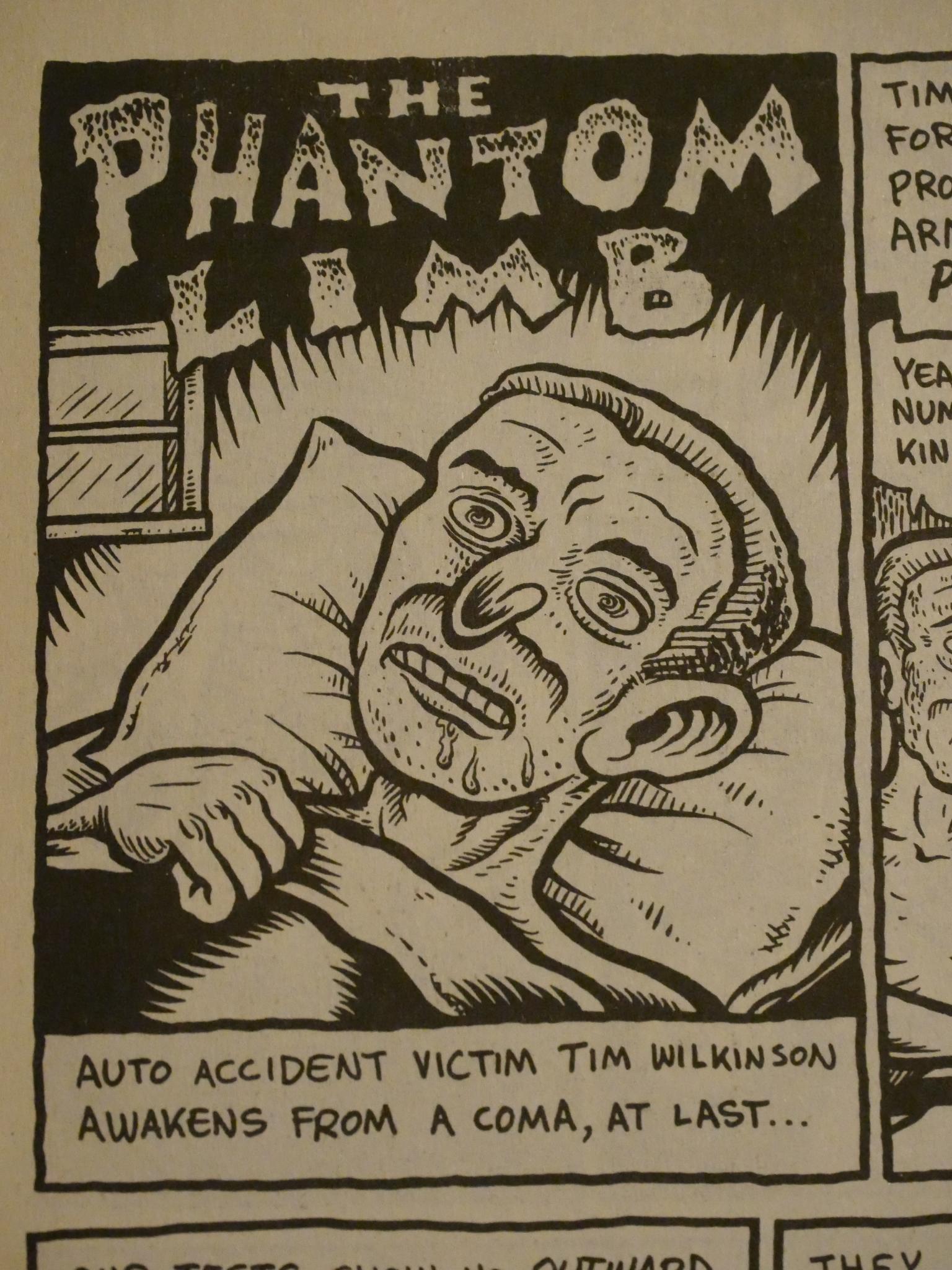 The final issue is a grab-bag of various odds and ends. For instance, there’s this three-page adaptation of an urban legend. 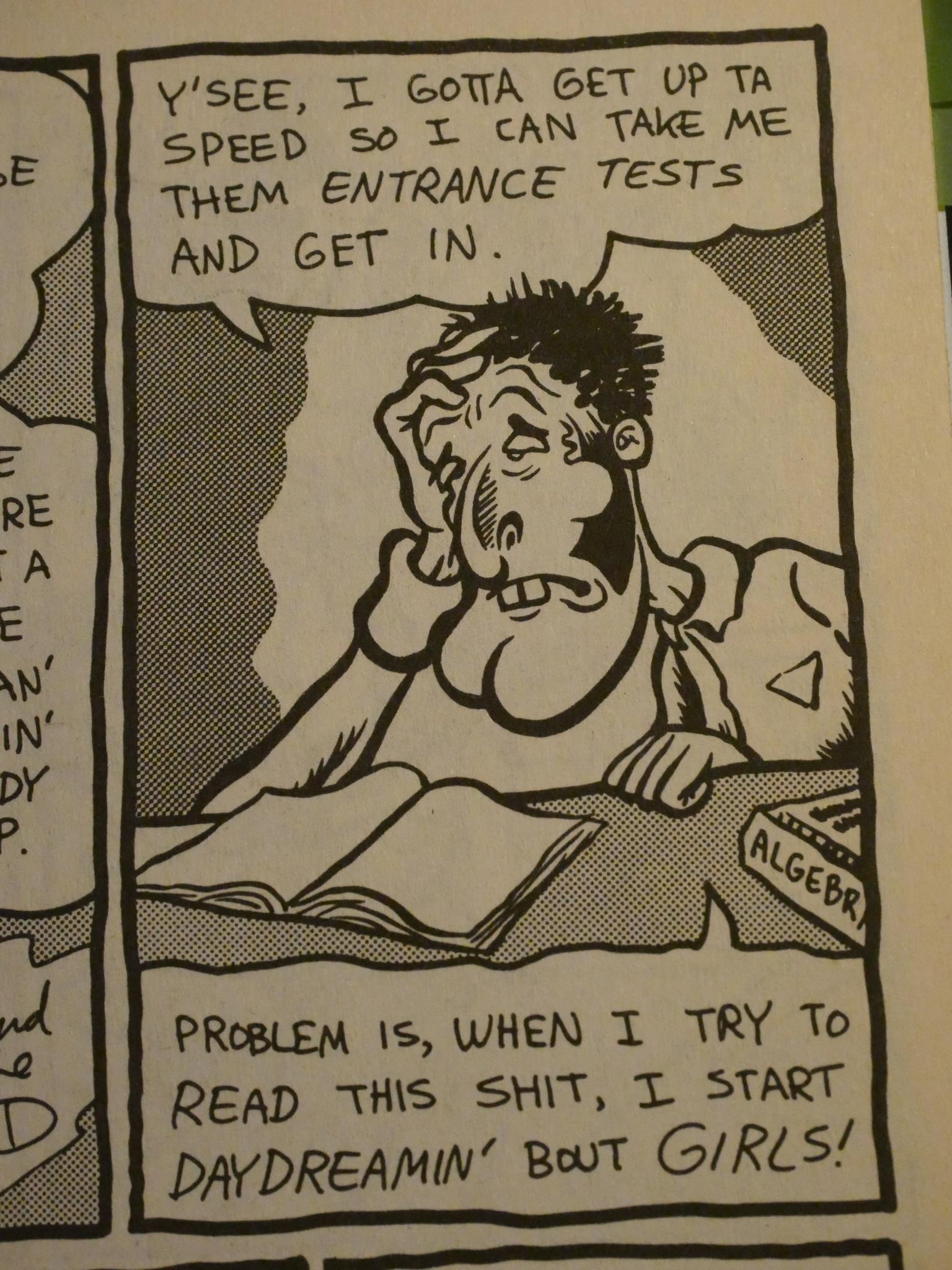 For the conclusion to the main storyline (which I suspect Tompkins had gotten really bored with by this point), Tompkins shifts to a simpler art style, complete with zip-a-tone and everything. To tie everything up, he (*spoilers*) just kills off two of the main characters. 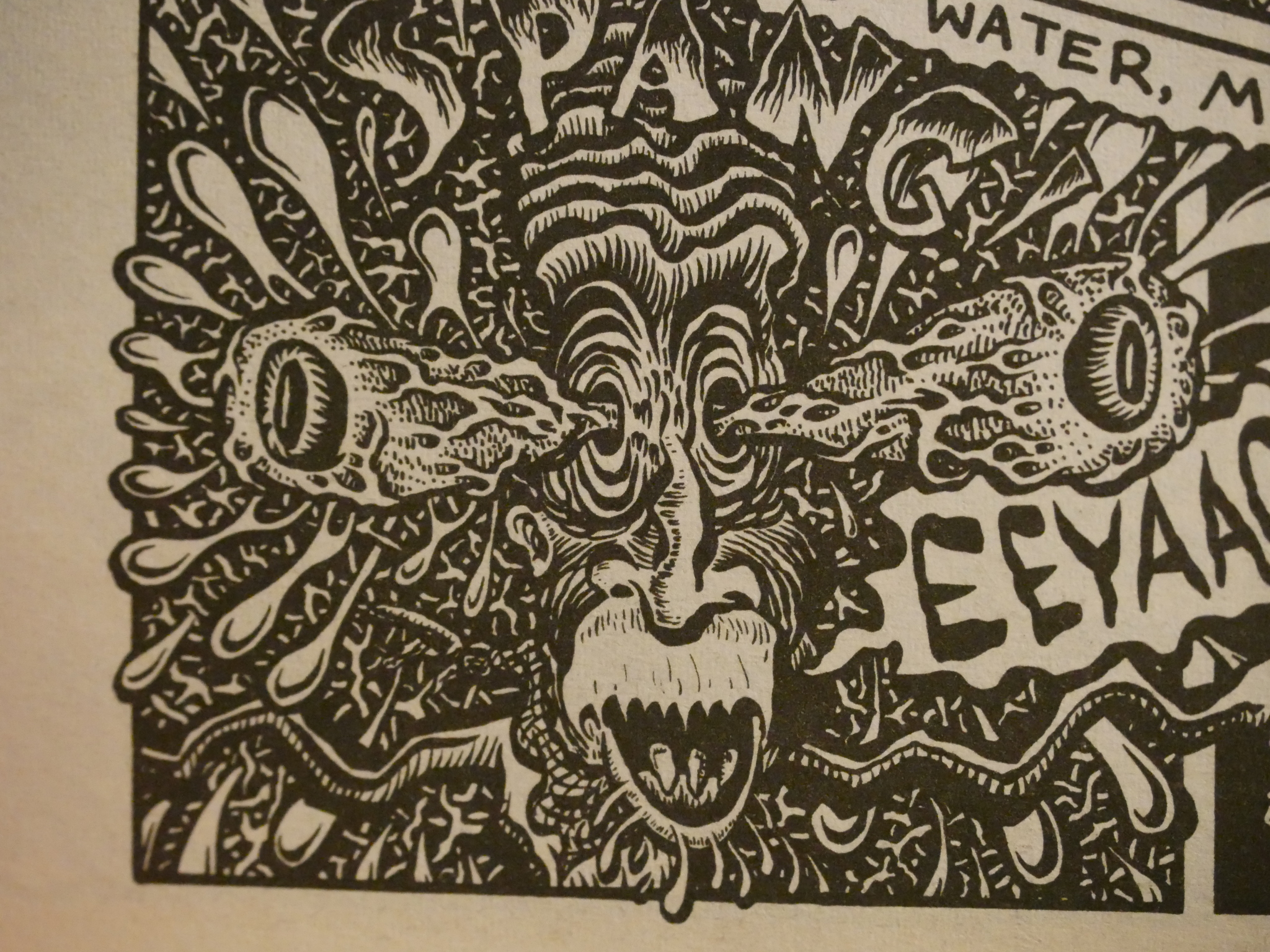 Most of the pages are taken up with earlier works probably intended for anthologies. They are drawn in magazine size ratios. 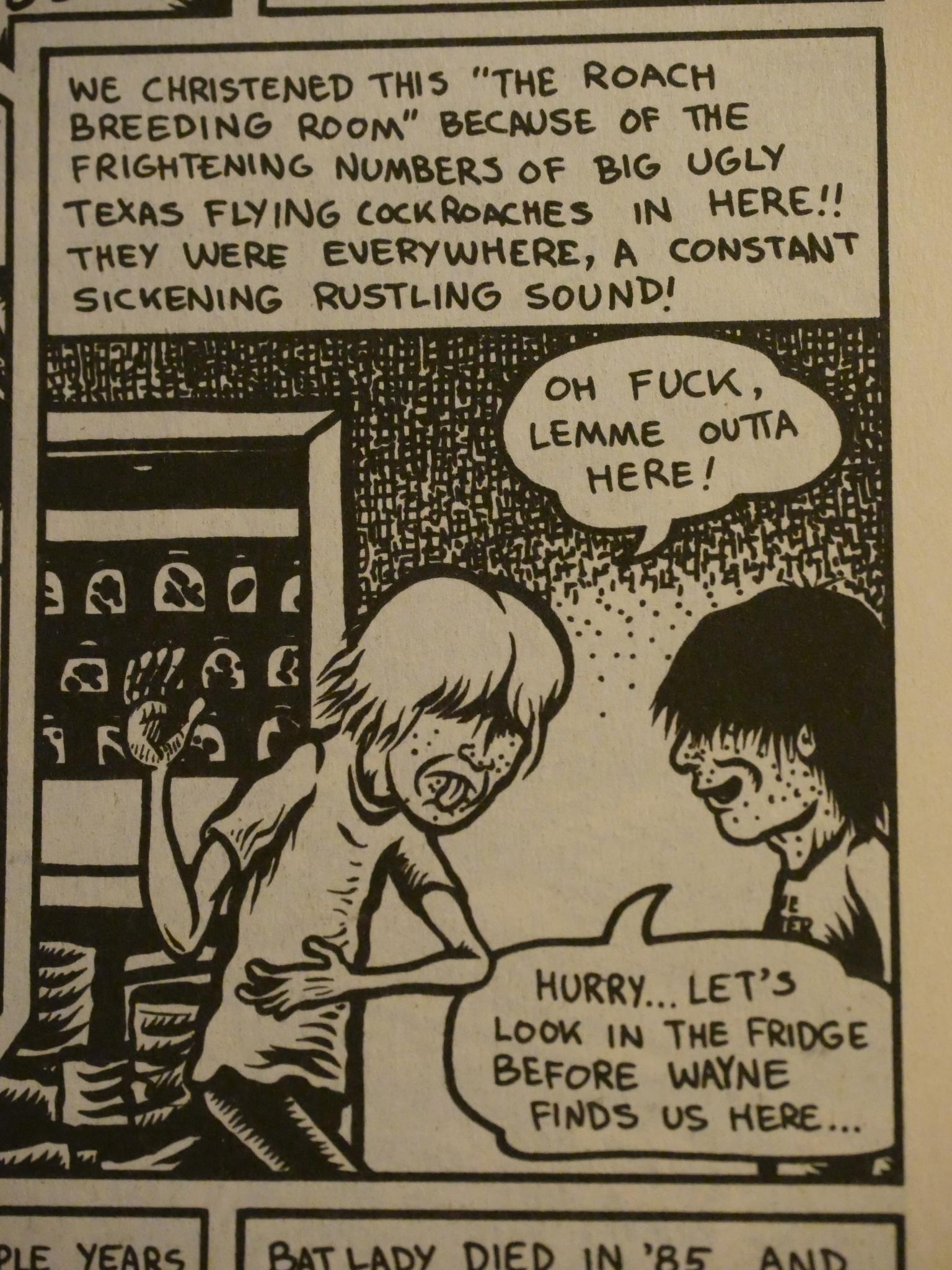 The most interesting is perhaps the (seemingly) autobiographical one about one of his high-school friends who had a mother who was a hoarder.

And… that’s it. Not a very satisfactory ending to a series that was kinda interesting.

As far as I can tell, Tompkins has not published any further comic books after Trailer Trash was abandoned. He seems to be working in illustration these days.