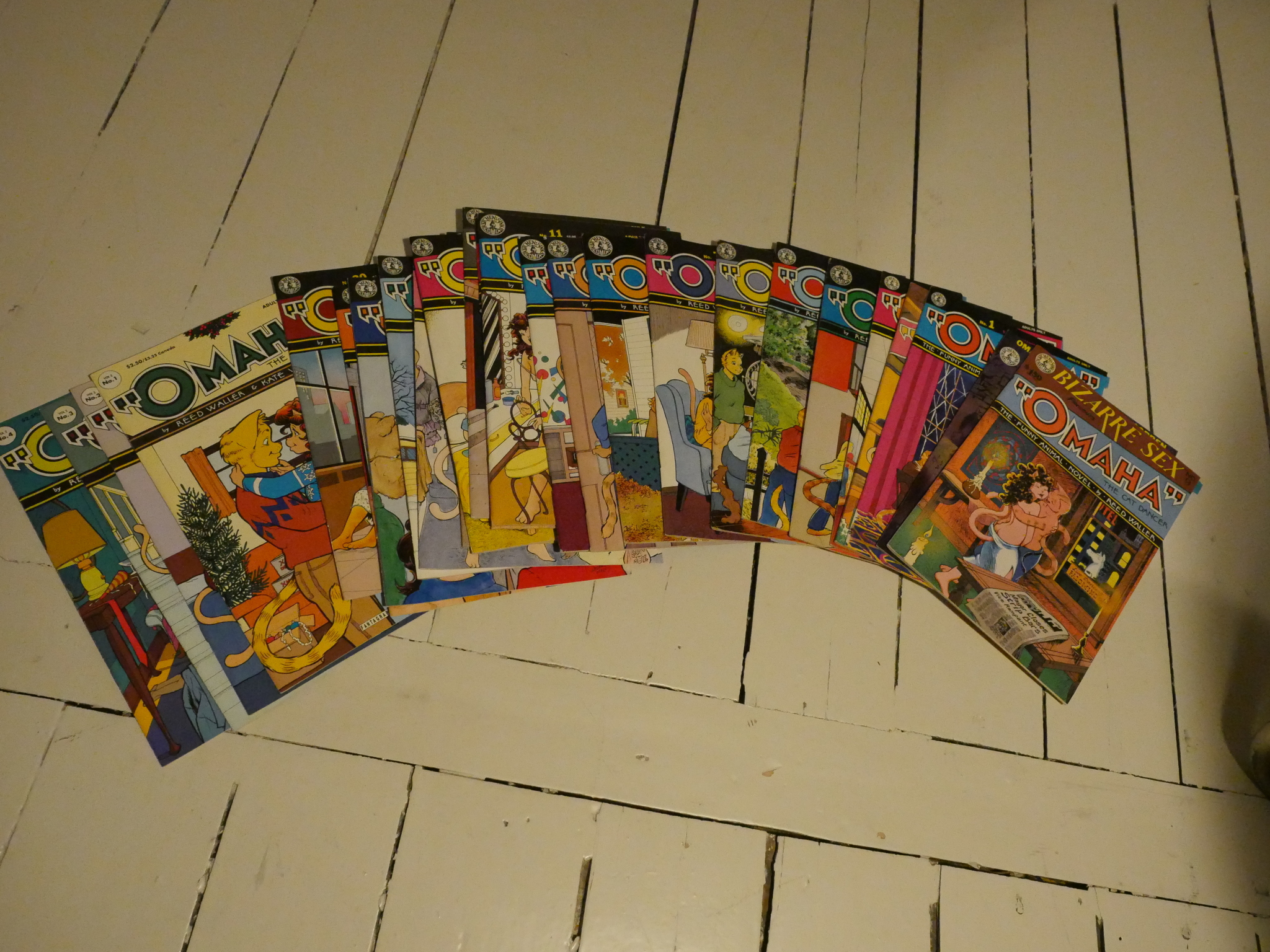 Reed Waller started Omaha in the mid-70s, and the earliest instalments were published in underground anthologies like Snarf and Bizarre Sex by Kitchen Sink. 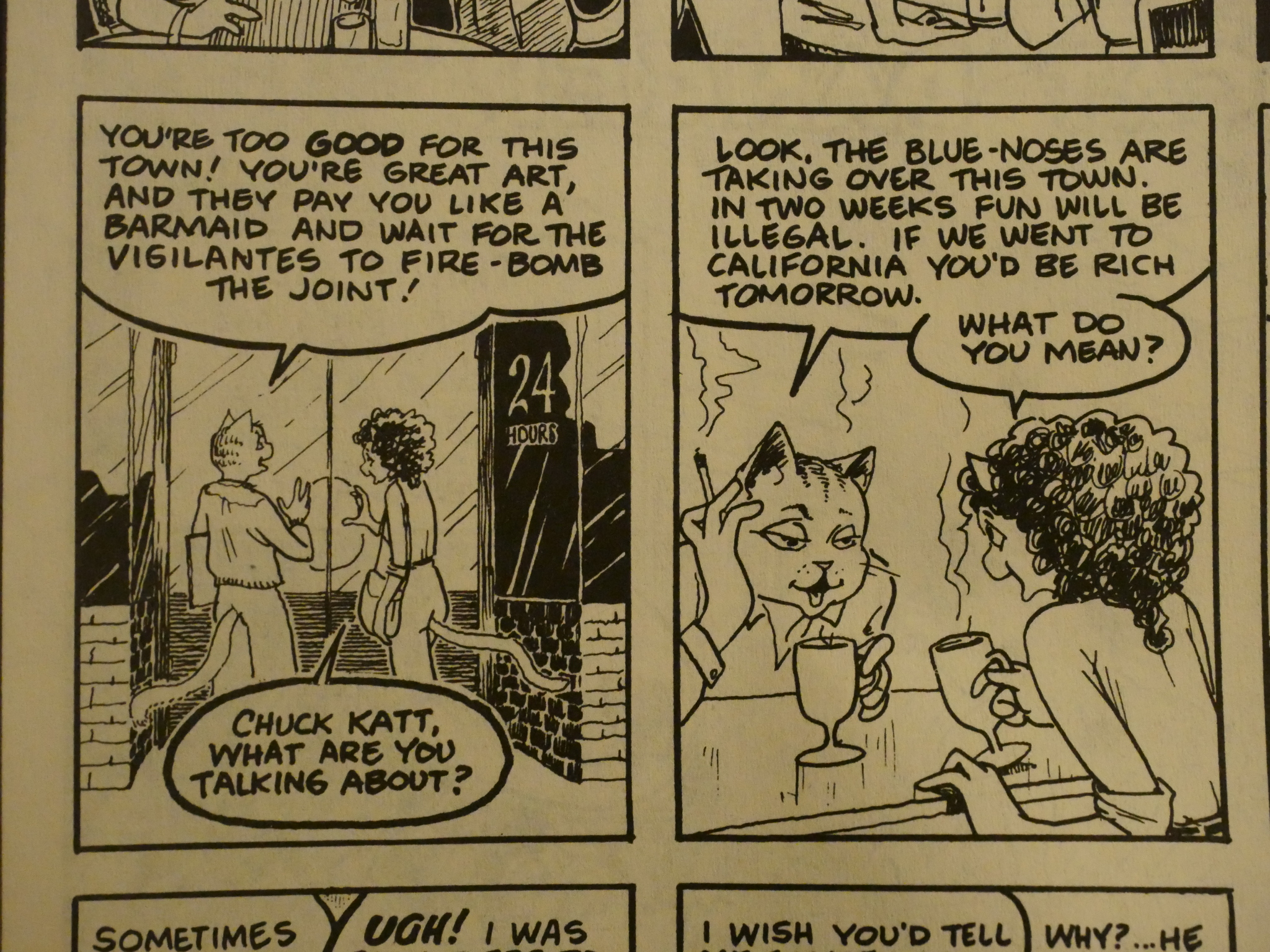 It’s an anthropomorphic tale of sex, politics and corruption that focuses on Chuck Katt (real name Tabey (yes, feel free to groan at the surnames)) and the titular Omaha, who’s a stripper. 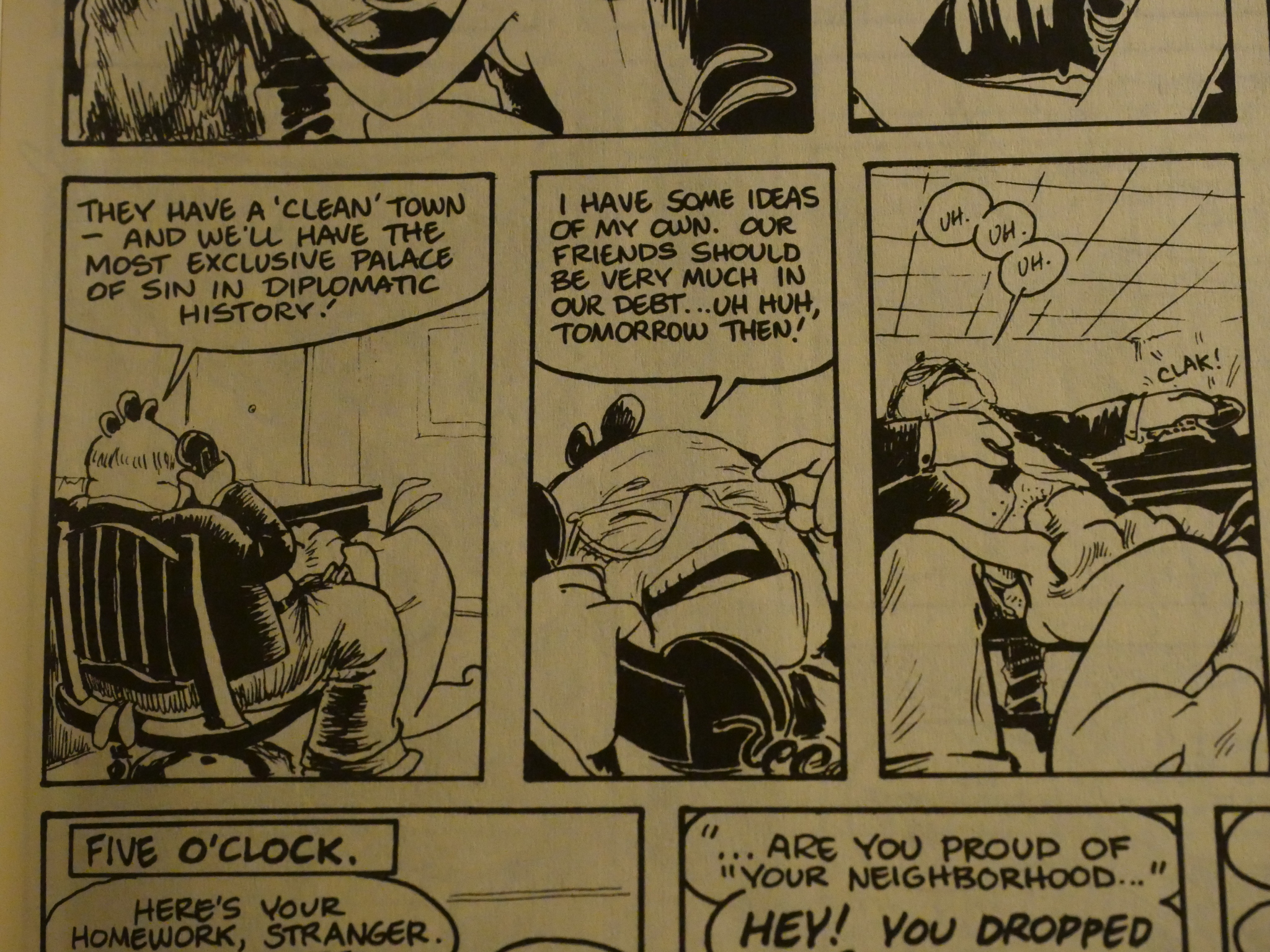 While there’s a lot of sex in the first issues, it’s not that major a part of the page count. It’s well-integrated. But… 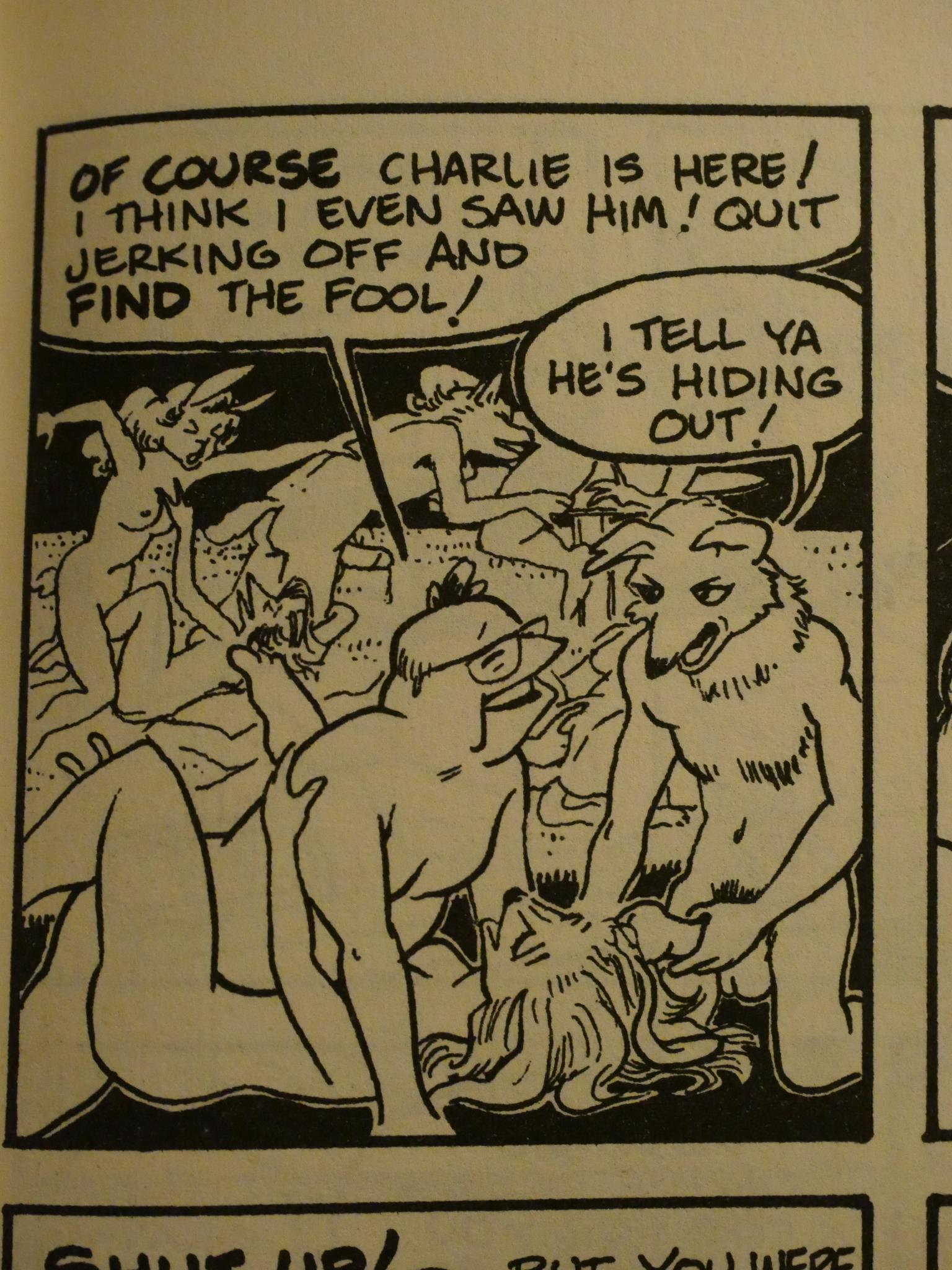 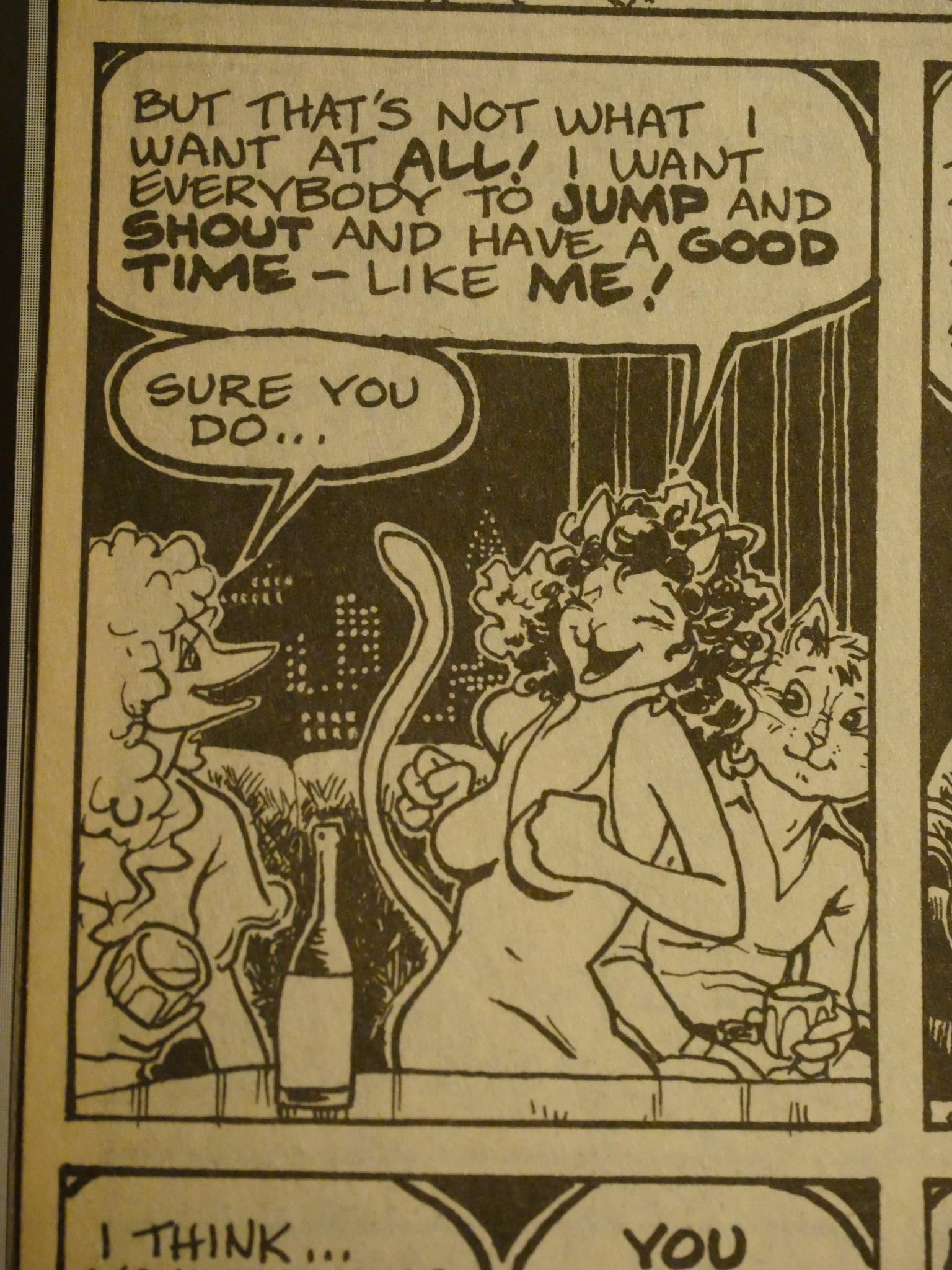 The artwork starts off charming and rapidly becomes more than that. Well, rapidly for a reader: Waller isn’t very prolific, and while there’s a constant refrain of “we’re going to be bi-monthly now” during the entire run, I think there’s on average one issue per year. With some multi-year gaps. 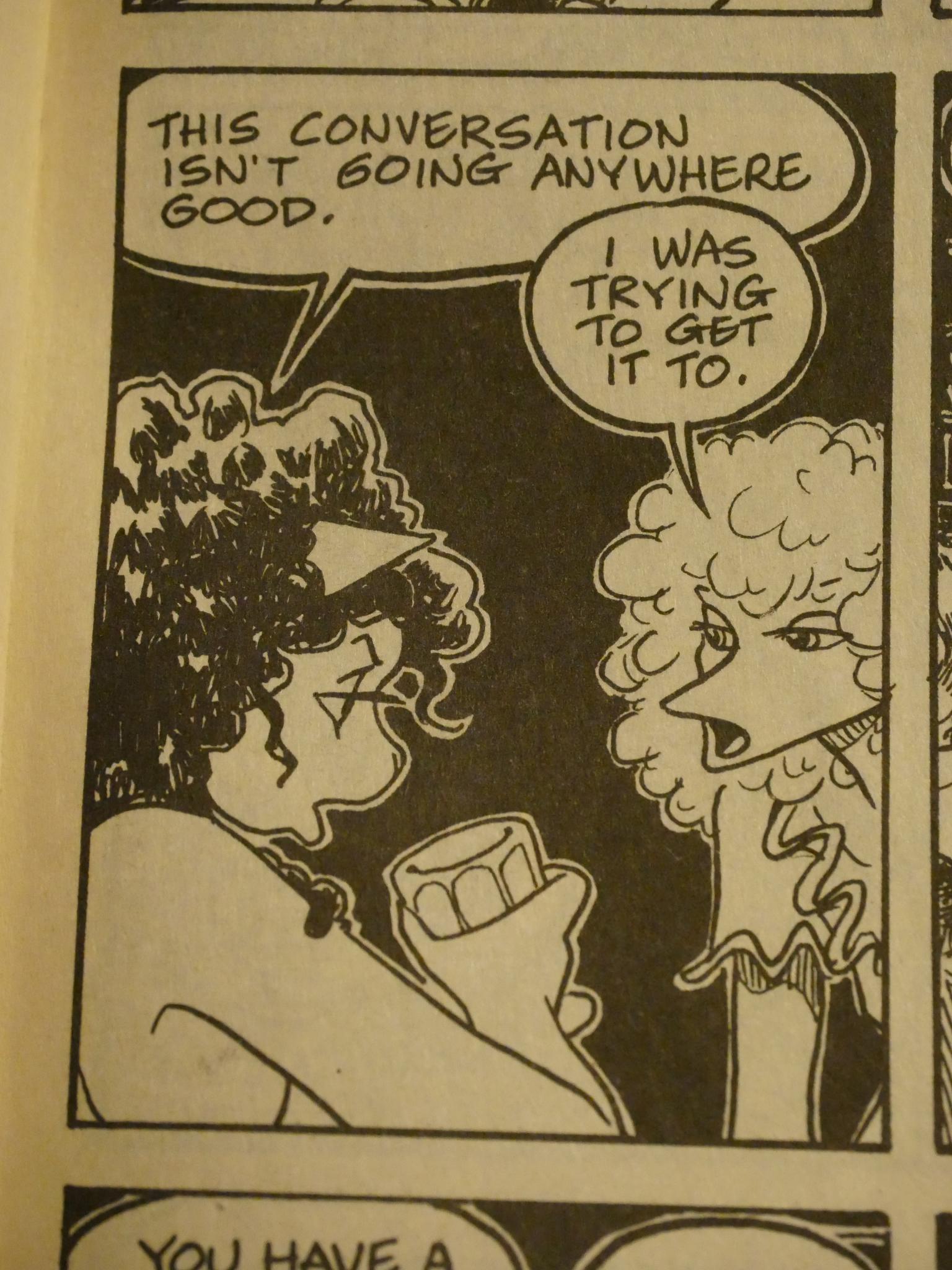 Waller has a very appealing art style. While everybody has strange animal heads, they’re extremely expressive and cute. I also love the way he draws a white outline outside the black outlines when there’s a black background (which happens a lot). Everything looks slightly embossed. 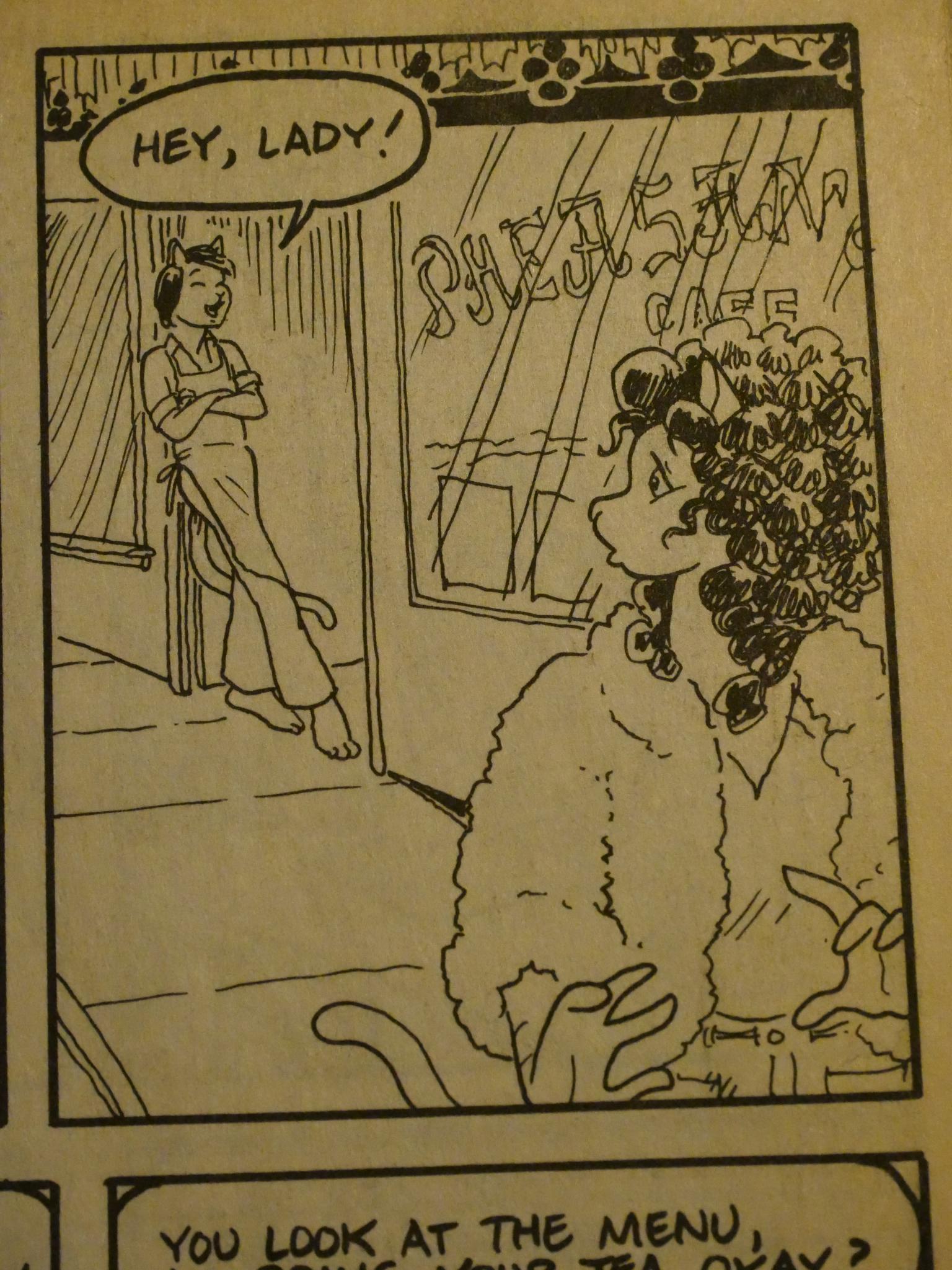 The first two “proper” issues were published by Steeldragon Press, but Kitchen Sink took over with issue three (and reprinted the first issues). With the second issue, Kate Worley was brought aboard as the writer, which would continue until the end of Omaha.

Plot-wise, there’s a lot of the stuff like the above: Omaha made her escape to San Francisco, and happened to walk past the restaurant of nephew of the owner of the restaurant above the underground night-club, and he recognised her and pulled her back into the plot. 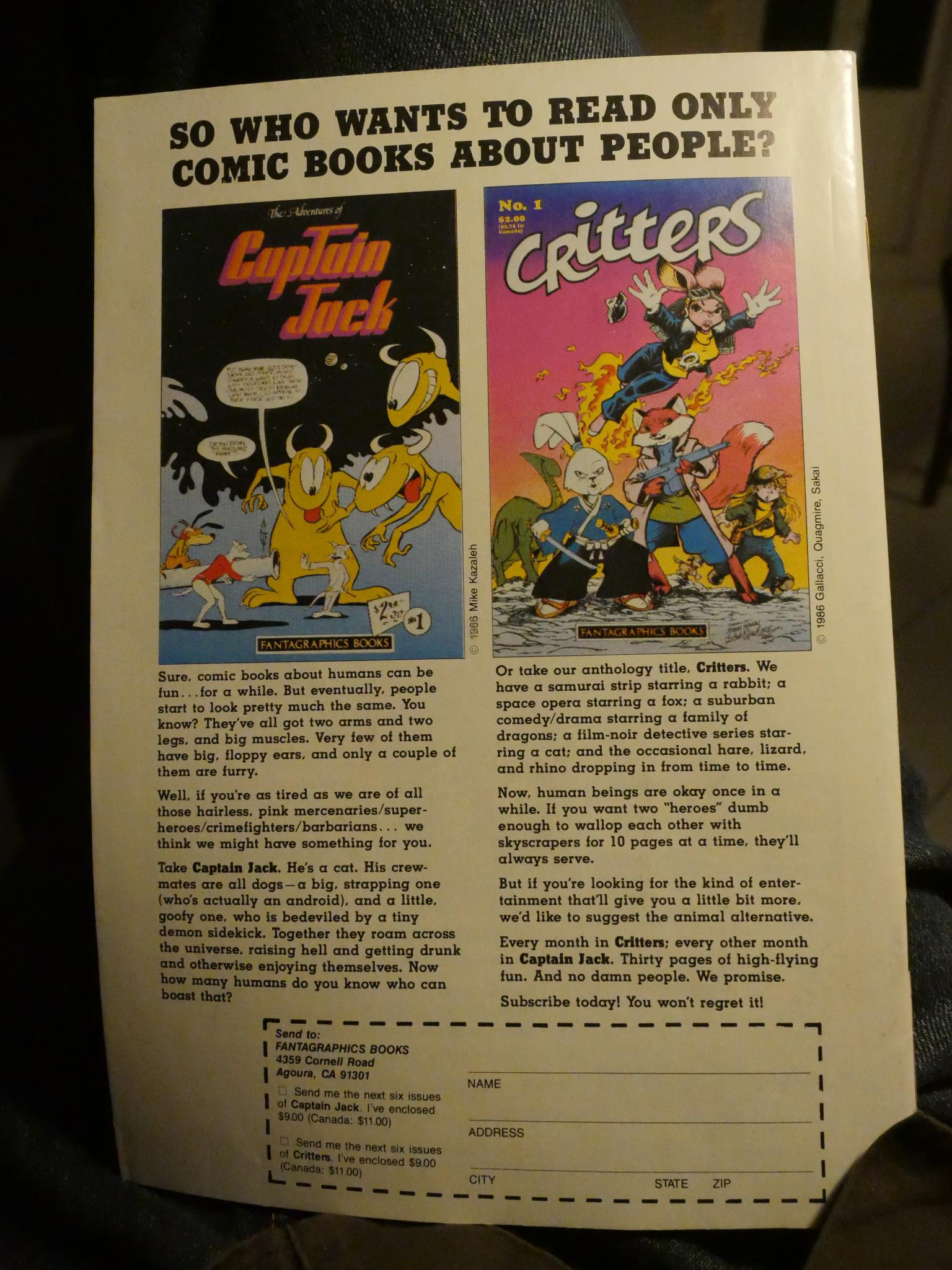 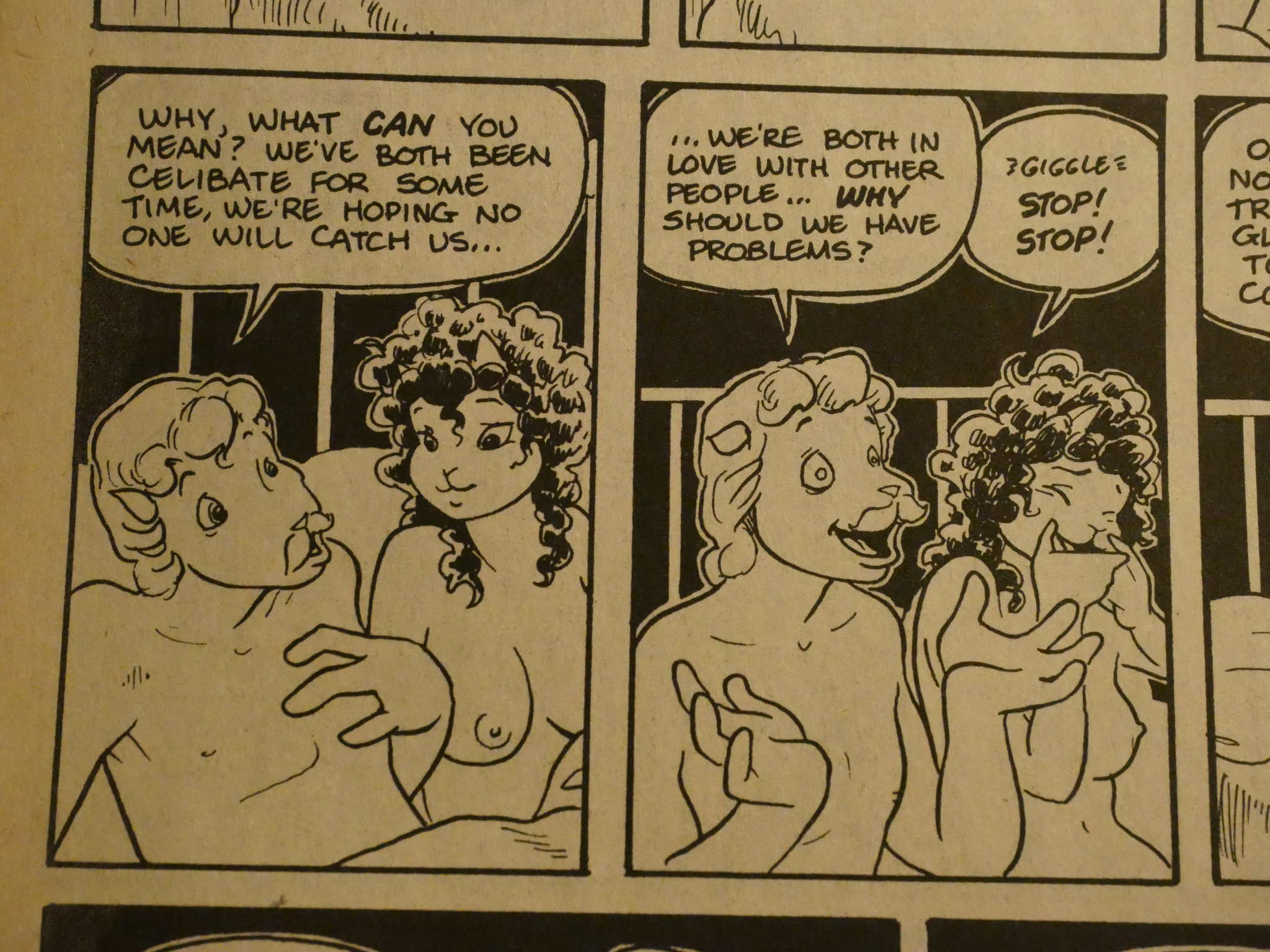 Like I said above there, Waller’s characters are extremely expressive. There’s a lot of firebombing in Omaha: It seems like the go-to tactic for the evil conservatives. 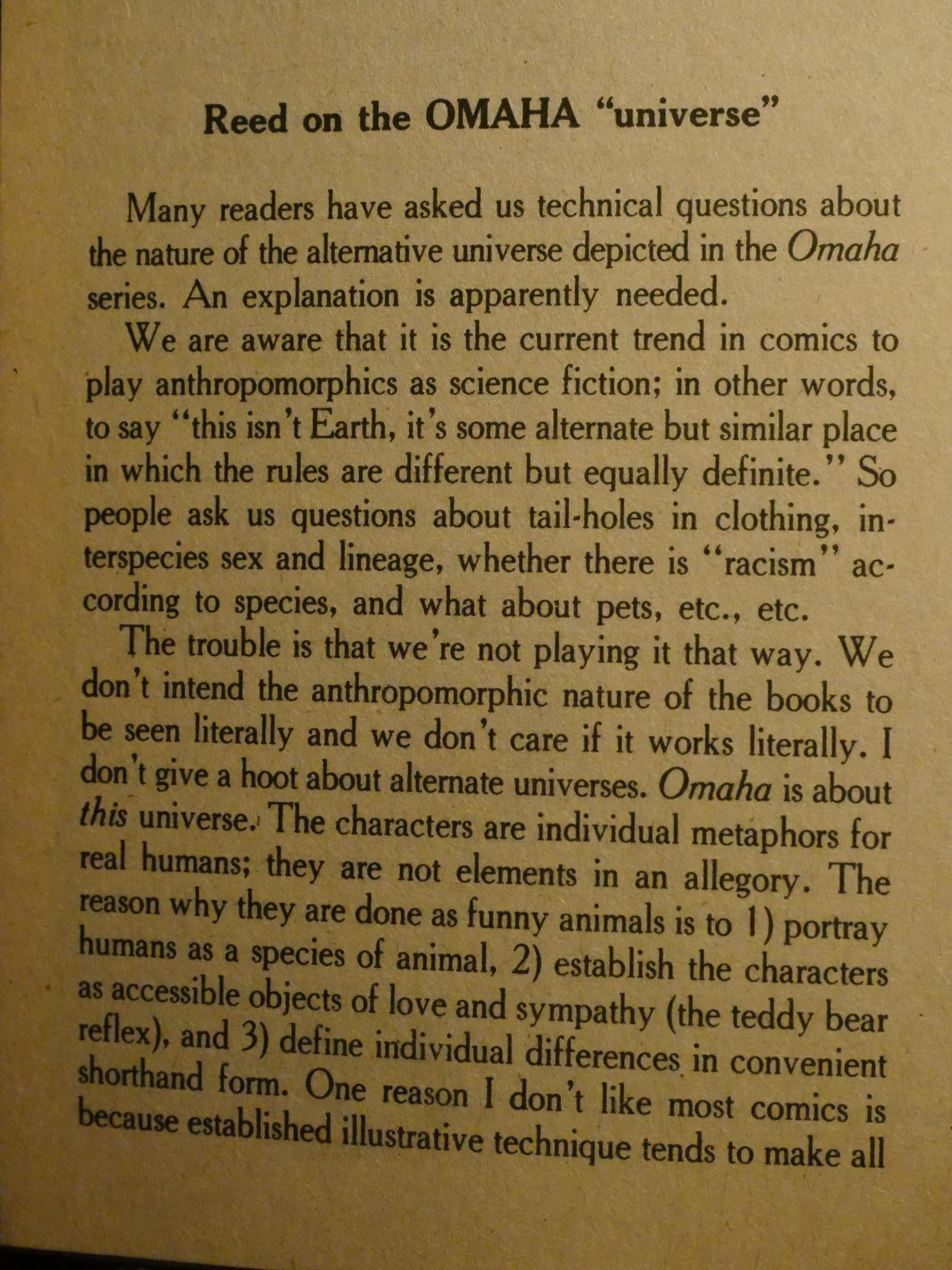 Waller explains his approach to anthropomorphism: He doesn’t really take it that seriously. These are just people who are drawn with animal heads and tails, and the animal chosen may be a shorthand for a personality trait of that character. But it’s not more nerdy than that. Wow. Bizarre Sex 9 (which was an all-Omaha issue) had sold 50K copies. That’s pretty respectable, and there were probably further reprintings later. It was eventually republished as Omaha #0 a few years later, but I don’t have a copy of that… 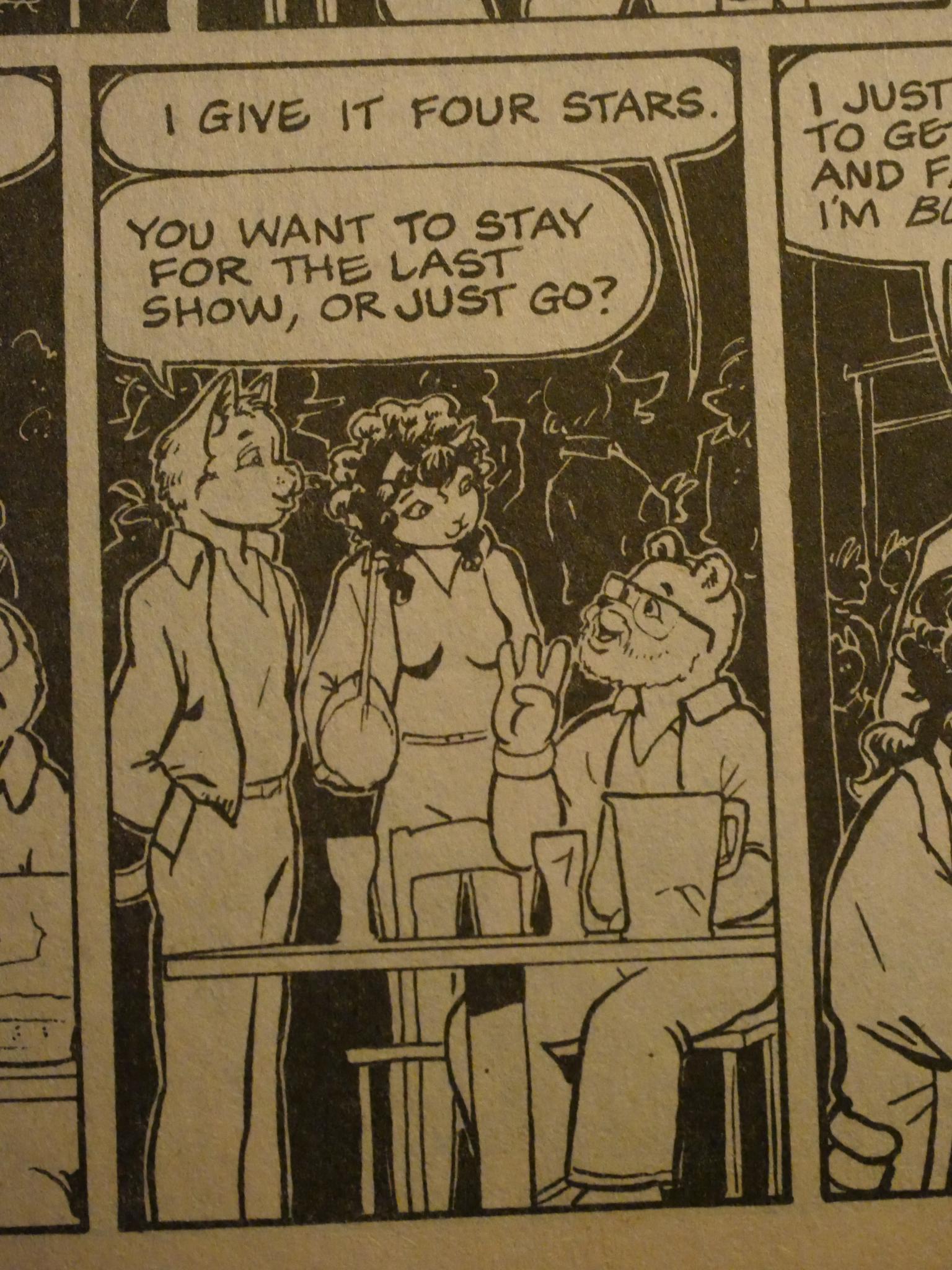 Heh. All the characters have only four fingers (which is a funny animal trope since the 1920s, at least), but here he says “four stars” and holds up only three fingers. Waller sticks to his “these are really people no matter how I draw them” philosophy. The inside front cover of each issue has a recap of the preceding issue. At first I thought this was rather odd: Wouldn’t it make more sense to give a proper recap of the entire plot to bring new readers up to speed? But instead this really is more for faithful readers that may need a slight nudge to be reminded what has been going on. I remember that, at the time, I did read those pages, but they didn’t really help that much. I had forgotten most everything that had happened, and who all these characters were. Omaha has a cast of more than a dozen characters, and there are several parallel soap opera plot-lines going on. Reading it back then (in the late 80s) as the issues trickled in, I found myself pleasantly confused most of the time, and that led me to believe that Omaha had a quite complex narrative structure.

But re-reading it now (for the first time ever, I think), it’s all very, very straight-forward: Omaha is all text, no subtext. The storytelling is clear as Vodka Lemon. Which is a bit disappointing.

I loved this book at the time, but my main feeling while rereading it is lethargy. In issue 12 they start running short backup features. This one, by Ken Fletcher, is typical. A recurring theme on the letters page is that people think there isn’t enough sex in Omaha now, and that it’s probably all Worley’s fault. But this letter writer mentions Yummy Fur as something that compares positively to Omaha in that department. Which is… er… Hm. There was quite a lot of merchandising around Omaha after a while. Prints, t-shirts, and a porcelain statue. Most 3D versions of characters designed for the comics page often look grotesque, but that’s not that bad, is it? The best backup feature is this one by Howard Cruse. It’s just a reprint of four strips that were created after the recently published collection, so it probably made sense to just chuck them in here. But they’re really funny. Hm… Has there ever been a really complete complete Wendel collection? I’ve got like four, but none of them included these strips… Yes! There’s a “The Complete Wendel” from 2011! Into the cart you go! Another recurring theme on the letters page is reports of obscenity cases against various comics shops in the US for carrying Omaha (and other comics). They’re mostly pretty tragic (people lost their shops etc etc), but this one is funny, and it’s from New Zealand. The Tribunal read Omaha and found that “the artwork and writings are of an extremely high standard”, and that it isn’t obscene, and didn’t put any age rating on it.

That’s the way to do it. The plot in the final Kitchen issues of Omaha is such a bummer. While Omaha usually trundles along on a pretty placid place and nothing really horrible happens, the way things turn out during the last issues is rather distressing. The final issue inexplicably switches to white paper (the rest are on newsprint), and Waller’s artwork becomes rather sketchy at the same time. Both Waller and Worley suffered through major health problems during this time, which may explain the depressing atmosphere. Finally we’ve arrived at the subject of this blog series! Fantagraphics! We revert back to newsprint and the page count is lowered to 24, but the storylines continue from the first volume without a hitch. Omaha is mostly taken up by pages like this where people are talking relationship stuff. That doesn’t leave much room to have any progress among the various plot strands (there’s a murder, there’s a demonstration to keep a block from being redeveloped, there’s missing parents and husbands, and…) and it’s kinda… boring. Yeah. I said it. The last 15 issues of Omaha are boring. Here’s the explanation for why Waller and Worley changed publishers. Kitchen Sink had “bought” Tundra (or the other way around — has this manoeuvre ever been properly explained?), and Omaha was no longer a good fit. I think that sounds rather odd, because Tundra would have been a pretty good fit for Omaha, I think? Or did they have a “no erect penises” policy? I don’t know. Waller’s artwork during these last four issues is very nice, and the storylines seemed to perhaps get a bit more development, and sales must have been nice… so why was this the last issue?

Oh! Googling a bit seems to indicate that Waller and Worley broke up and refused to work together. There was a reconciliation a decade later, and they published a few more issues before Worley died. After this, Worley’s widower continued to write the series from Worley’s notes. NBM published the conclusion to the saga in 2013. I have not read any of this newer material and I’m not sure I feel motivated to do so, either.