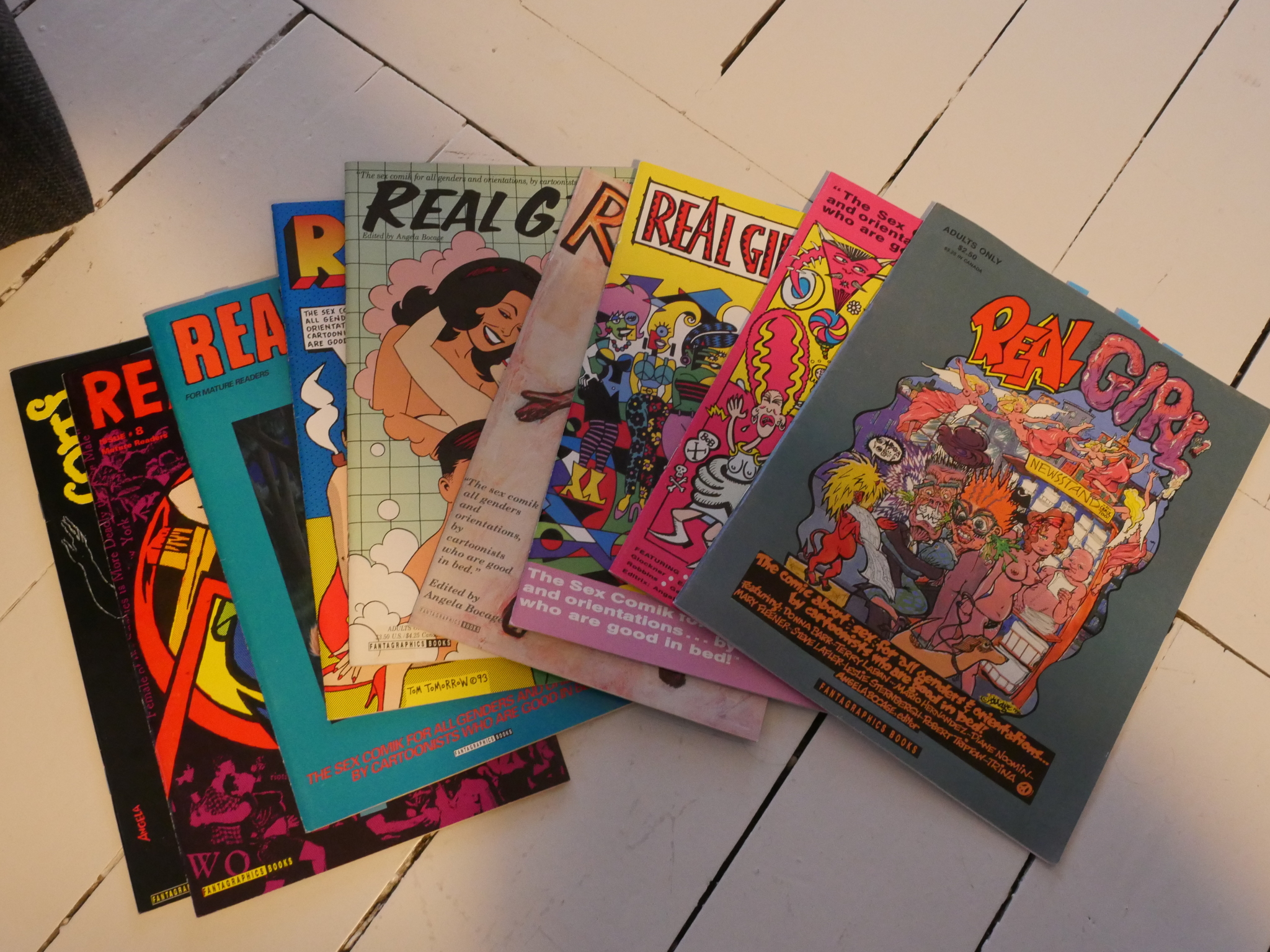 I had forgotten how many anthologies Fantagraphics used to publish. Anthologies are still a thing, but I don’t think there’s much being published in something resembling this format: An editor who wants to explore a specific theme, and then invites contributors to participate. (Perhaps Island by Brandon Graham and Emma Ríos would qualify…)

This time out we’ve got Real Girl edited by Angela Bocage. “The Sex Comik for all genders and orientation… by cartoonists who are good in bed!™” 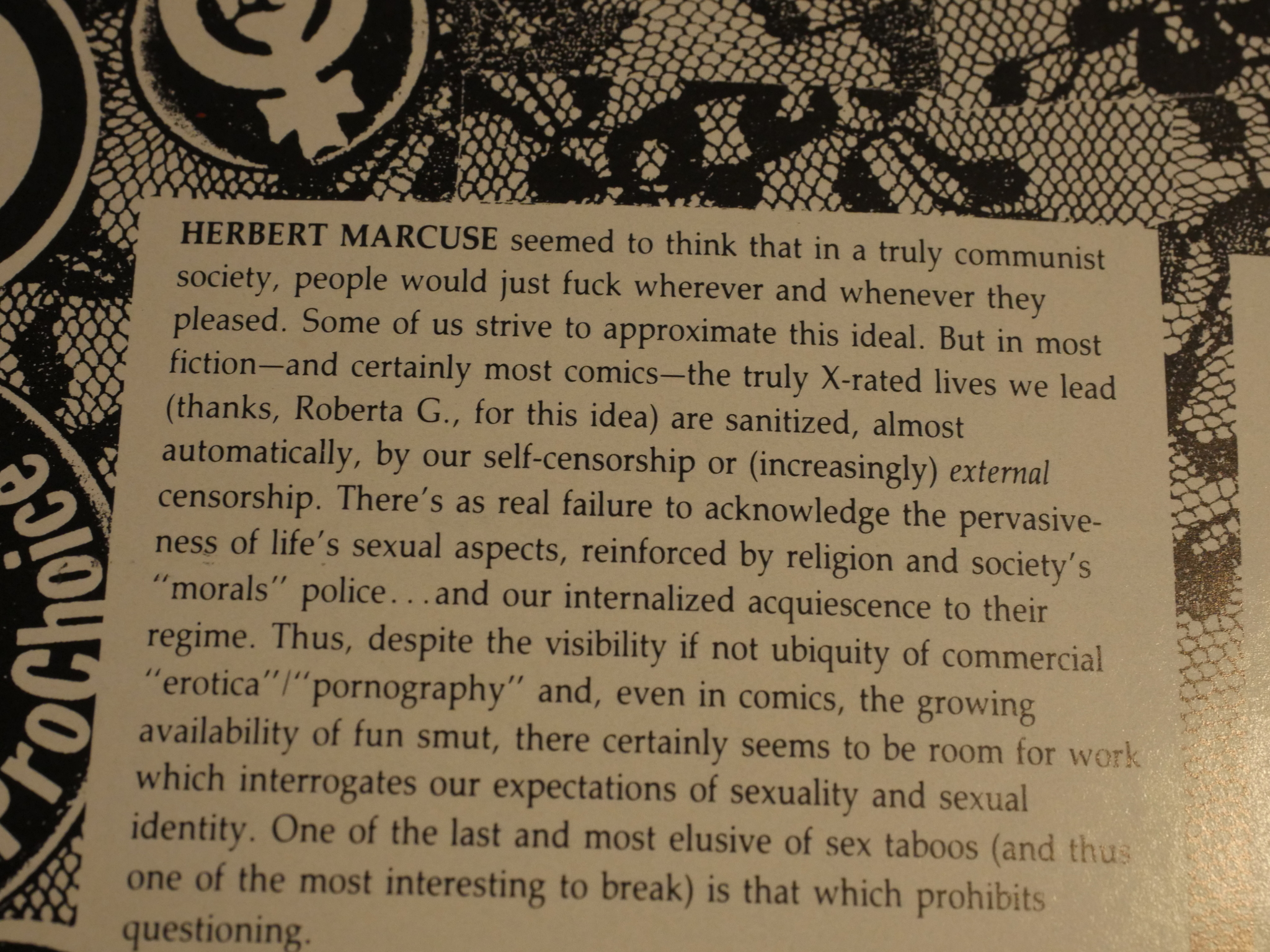 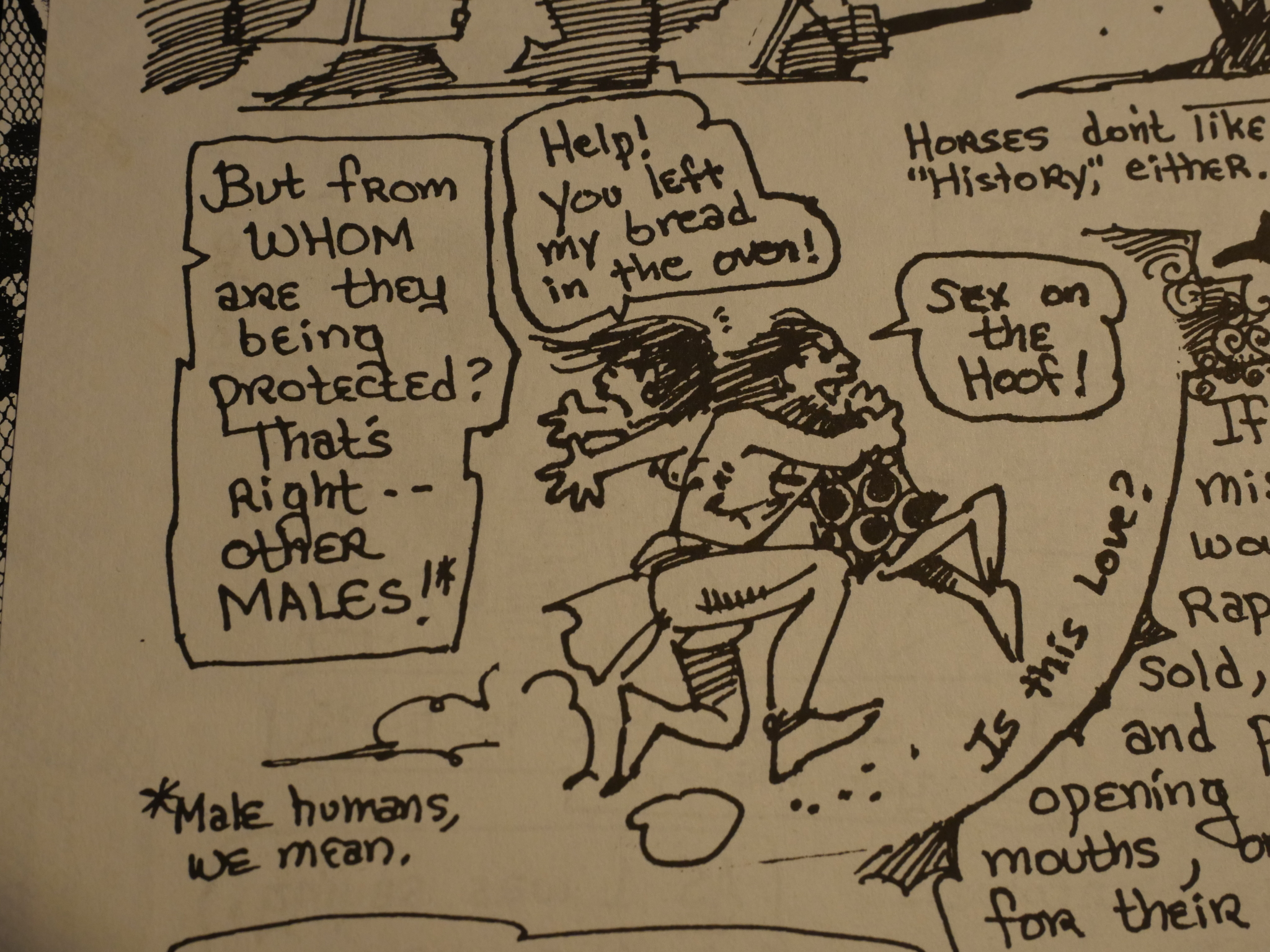 Donna Barr writes about how males aren’t really necessary, and provides several ideas on how to protect yourself from them (kick them in the knee, not the groin, because you may tipple over). 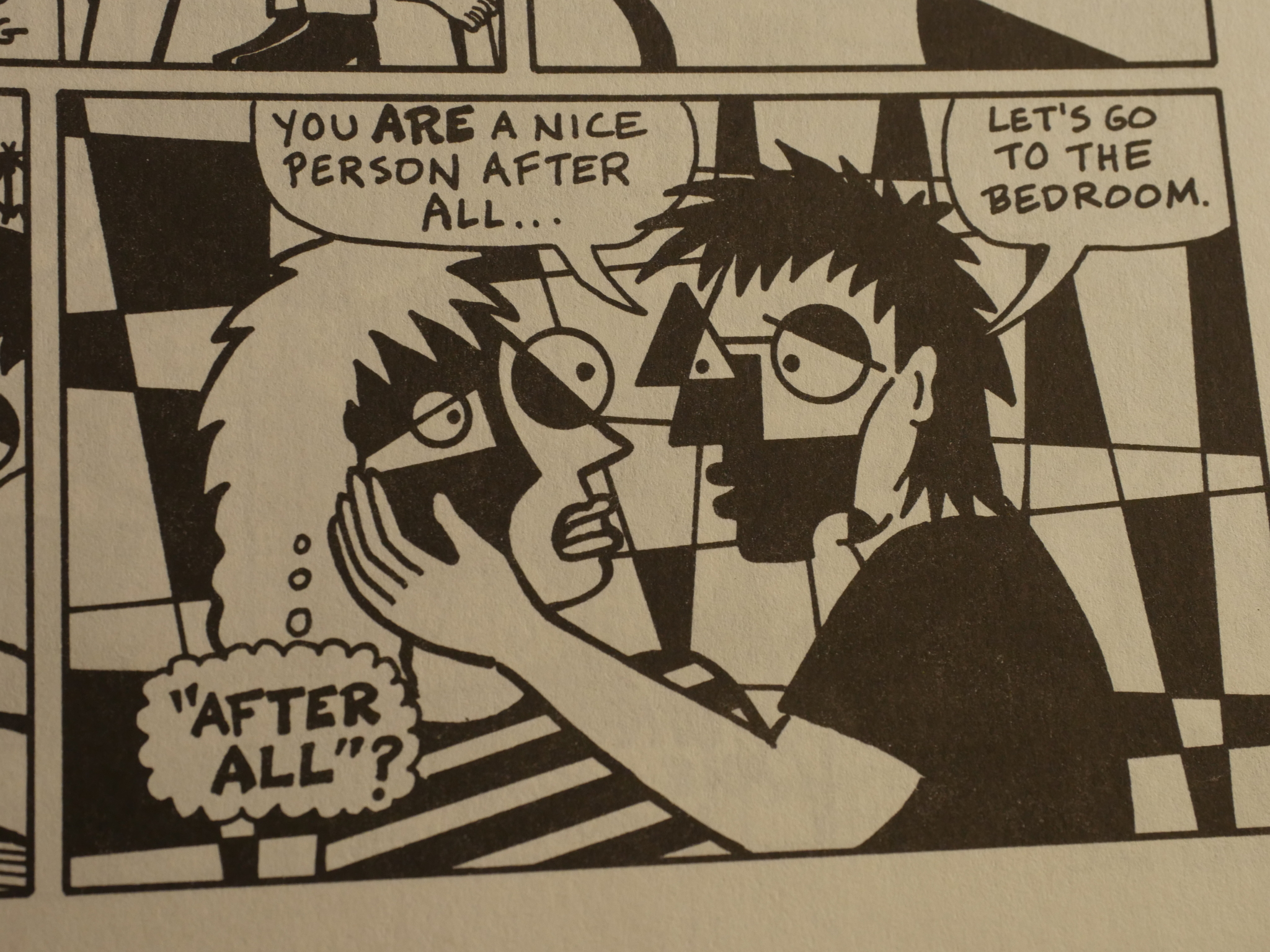 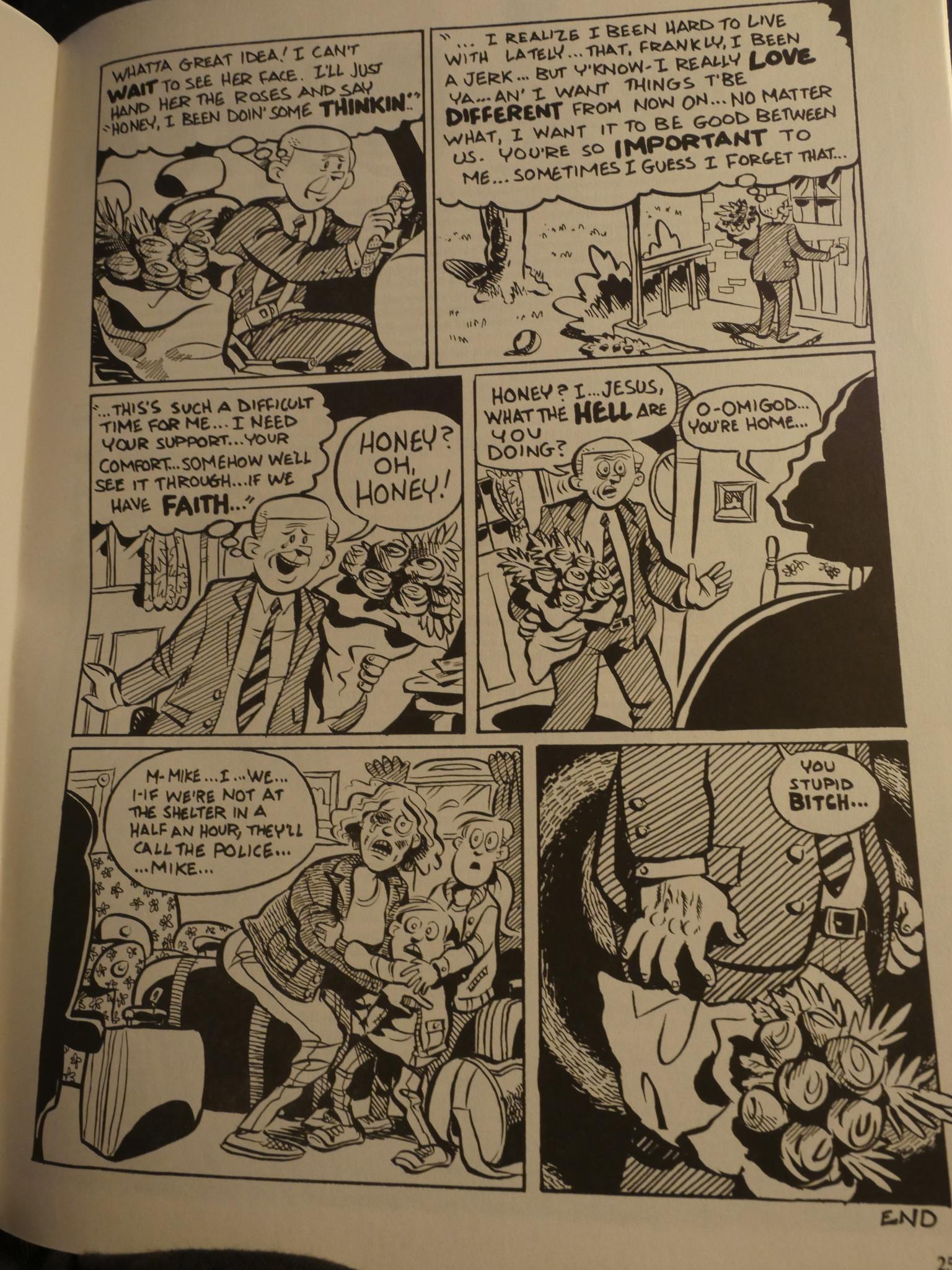 Terry Laban does a story about an asshole who beats his wife.

So perhaps not hitting the spec 100%. 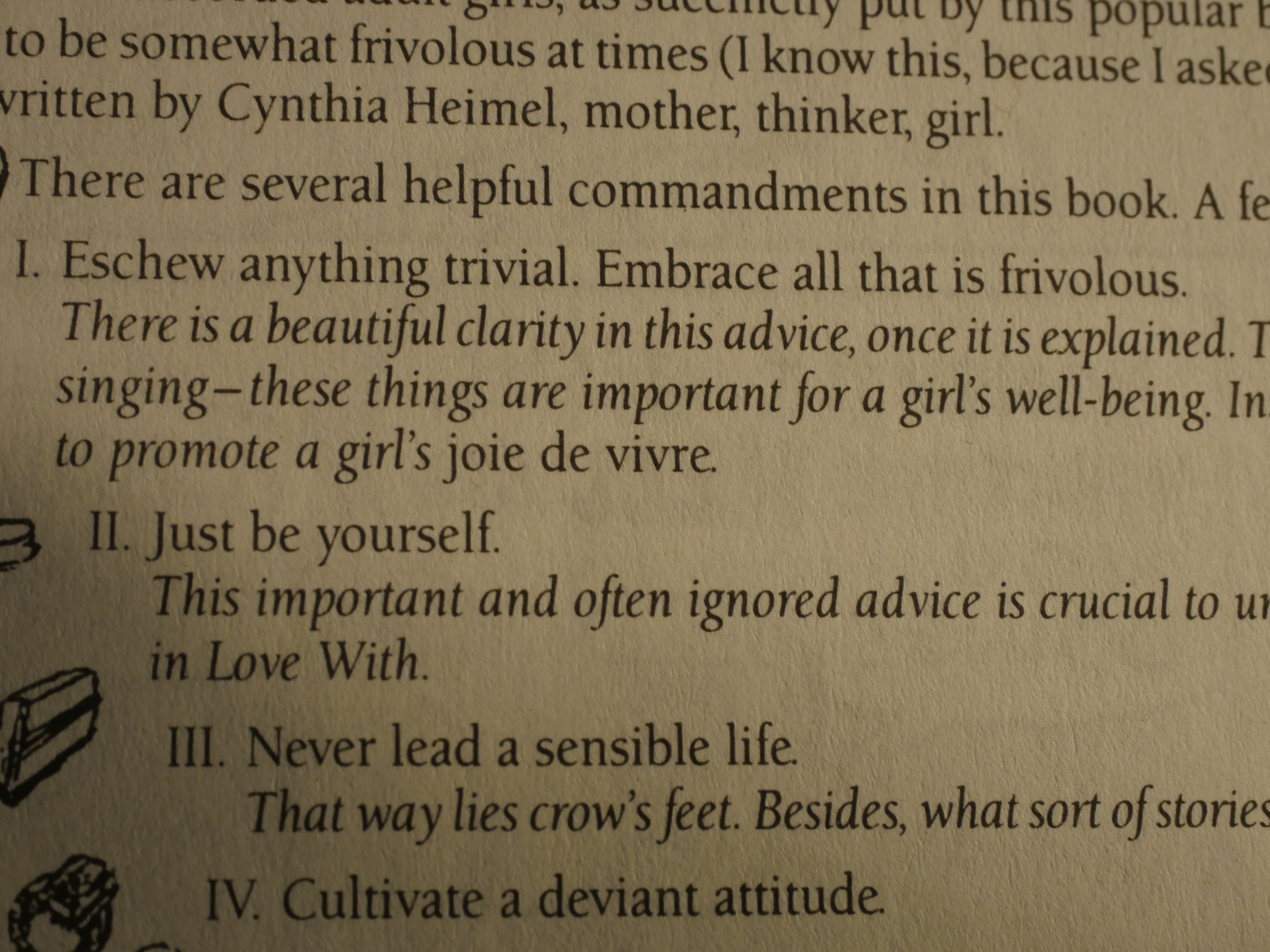 But I love these tips in Rebecka Wright’s little essay. “Eschew anything trivial. Embrace all that is frivolous.” That’s my life!

With the second issue, the book goes from magazine size to standard comic book size. For most of the 80s, magazine size was the default Fantagraphics size, but I guess they gave that up as the 90s started… 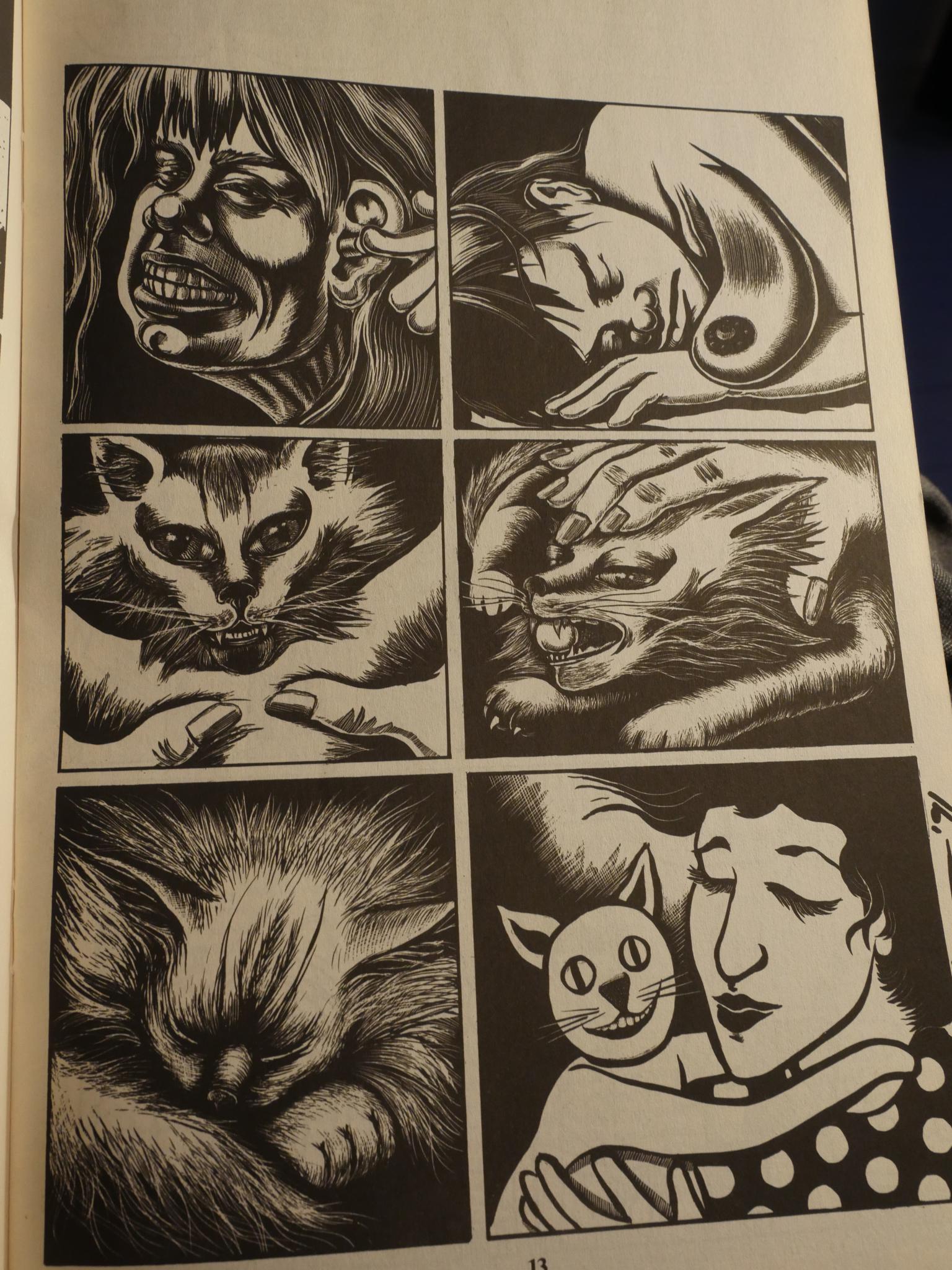 What a lovely one-page story by Phoebe Gloeckner. 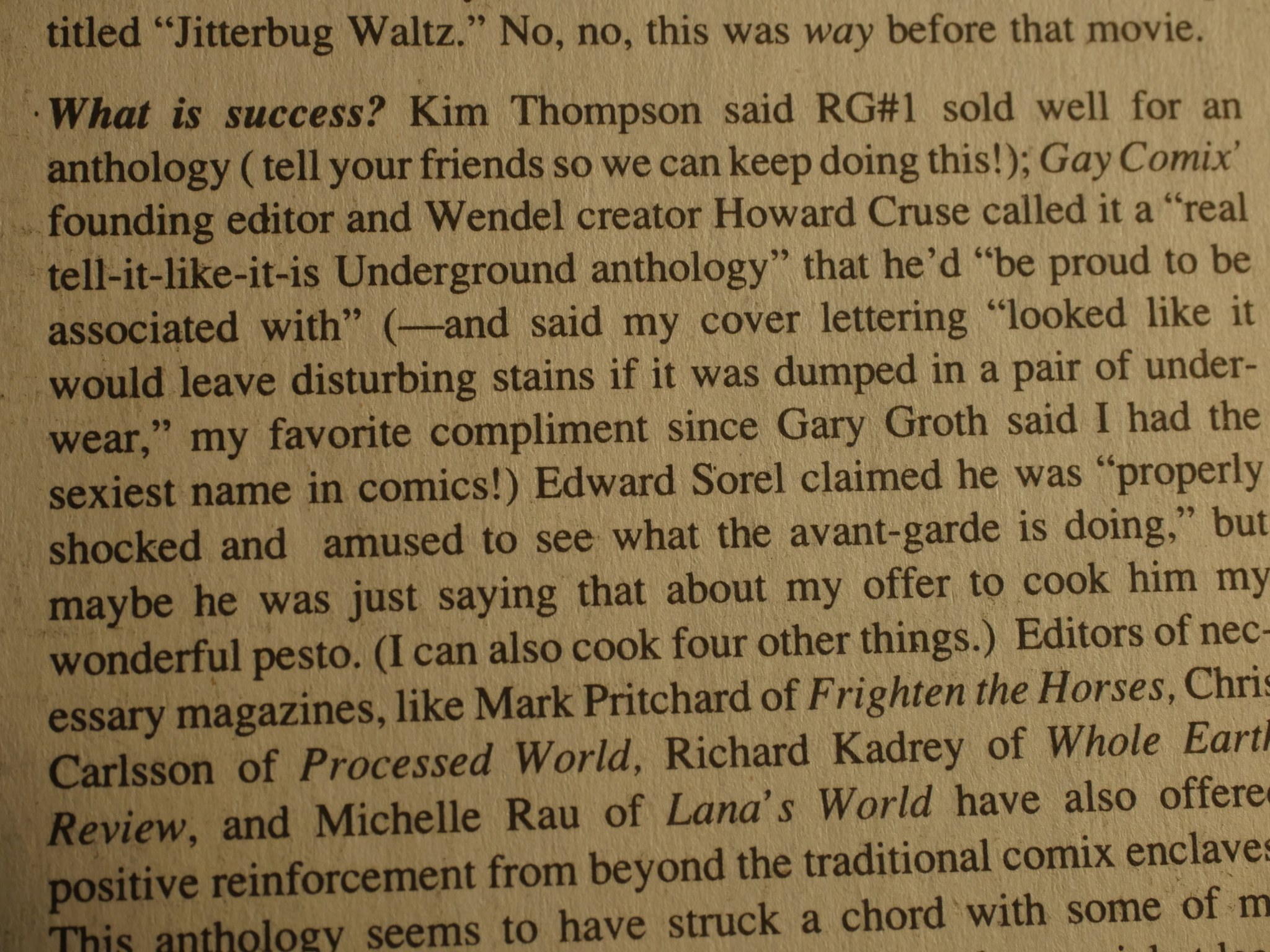 “Sold well for an anthology.” 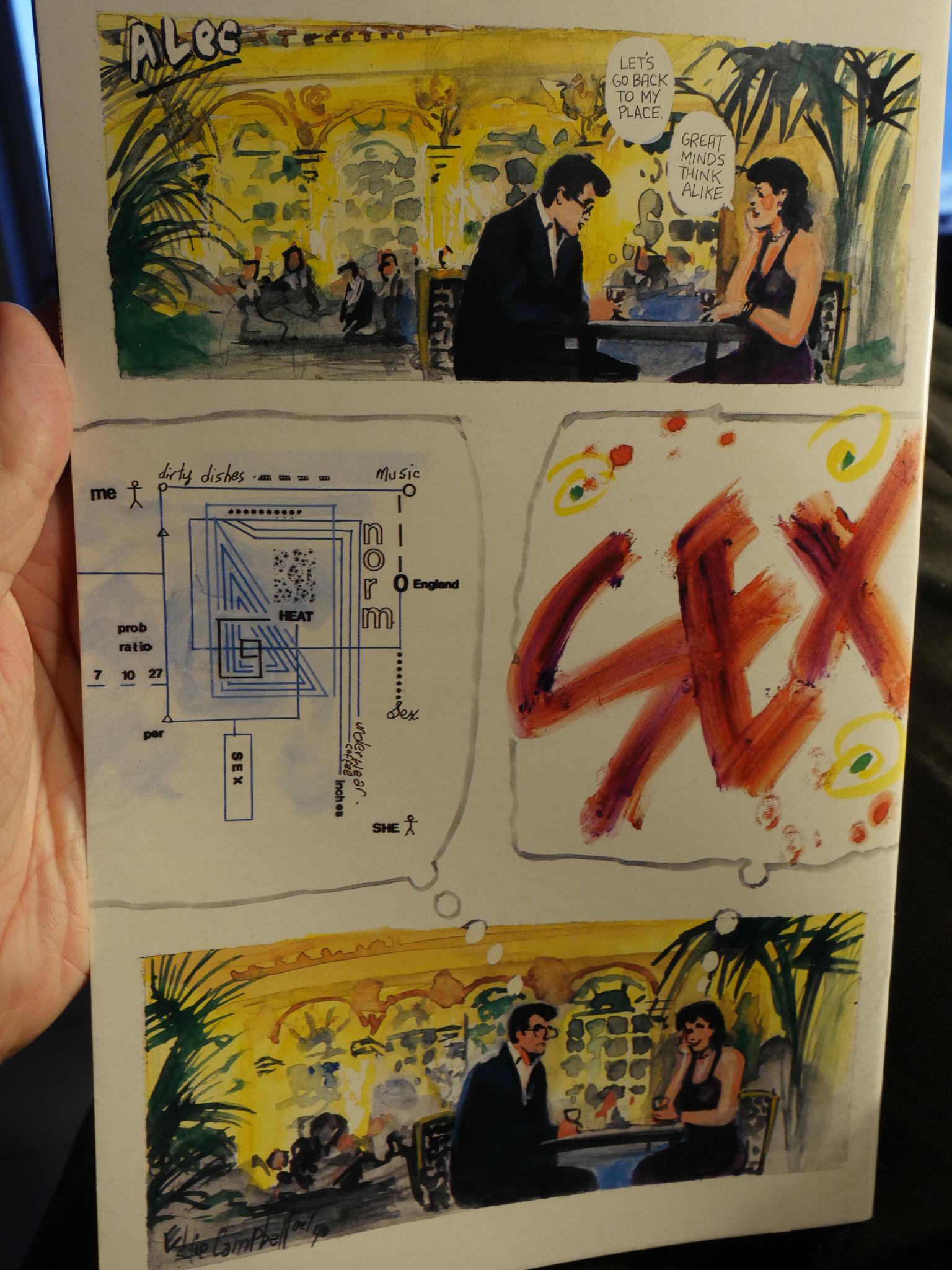 An “Alec” back cover by Eddie Campbell. It’s about sex.

I love this Diane Noomin story about visiting Aline Kominsky and her mother: 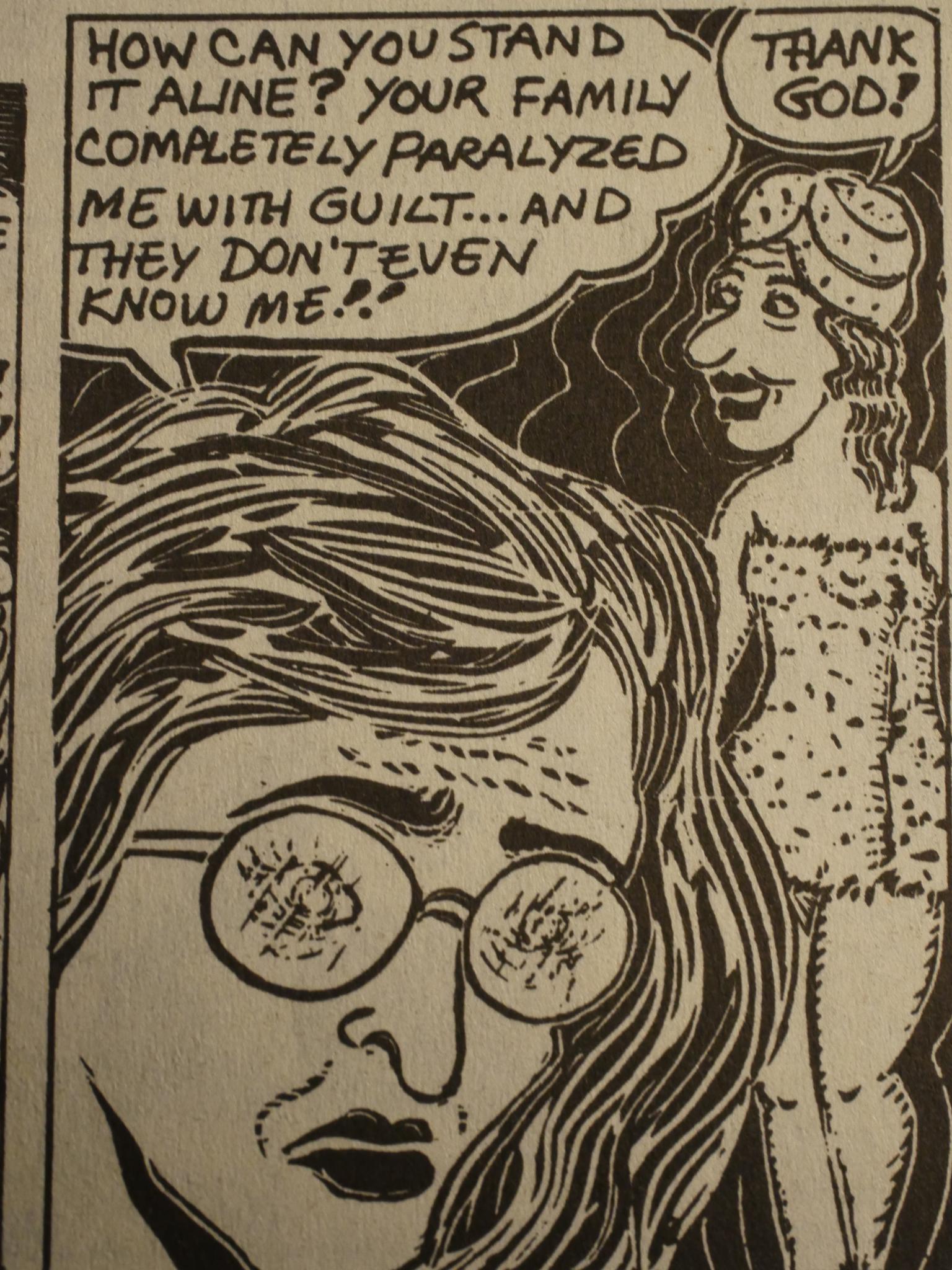 Tee hee. But back to the sex: Yipes. This story by Judy Becker is not a little bit creepy, but it also feels extremely true to life. And here’s from her story in the next issue: 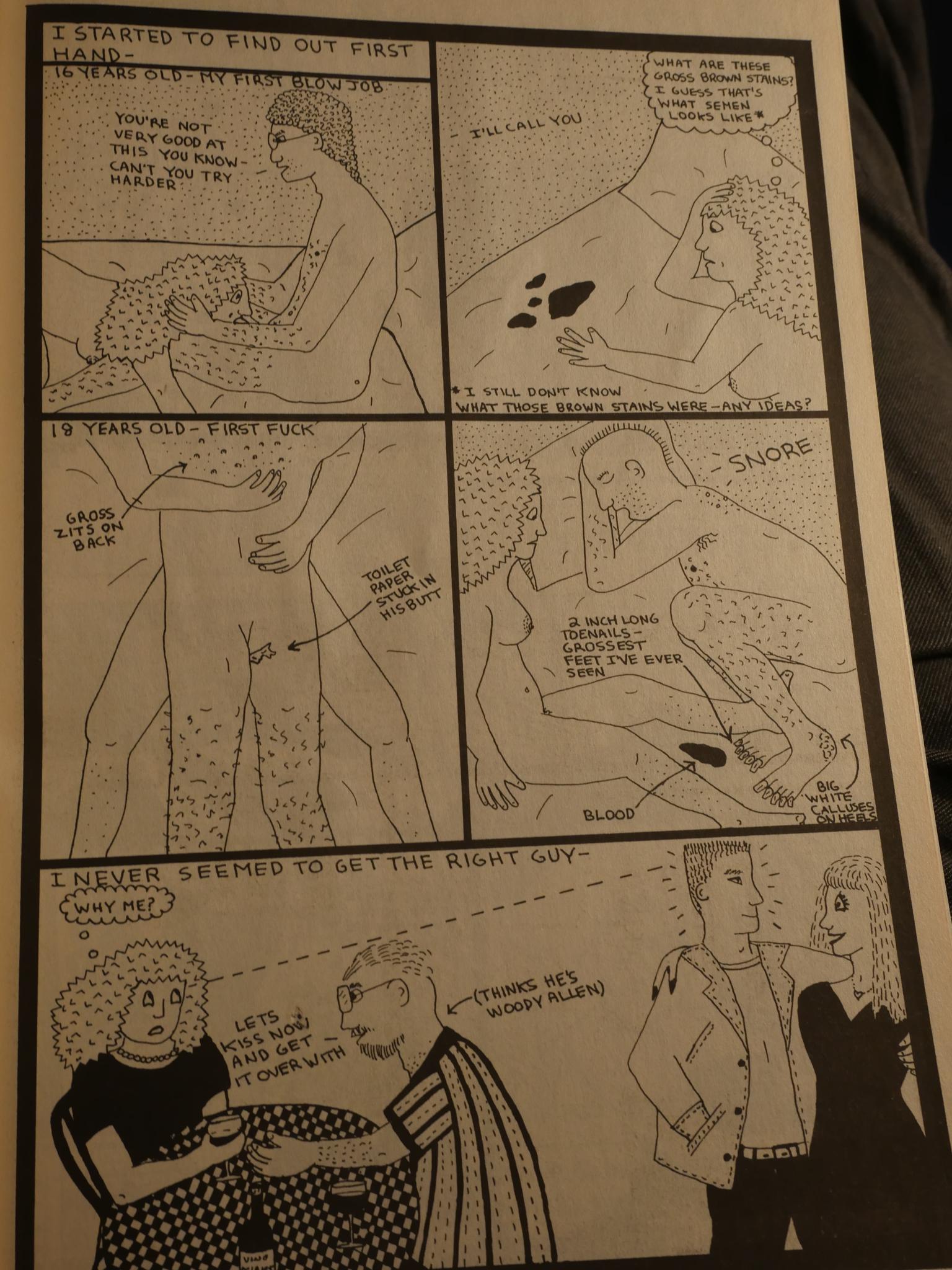 Yes, what were those stains! WHAT!!!

The artist having the most pages in the first few issues was probably Mario Hernandez. But here his brother shows up with a lovely cover for issue five: 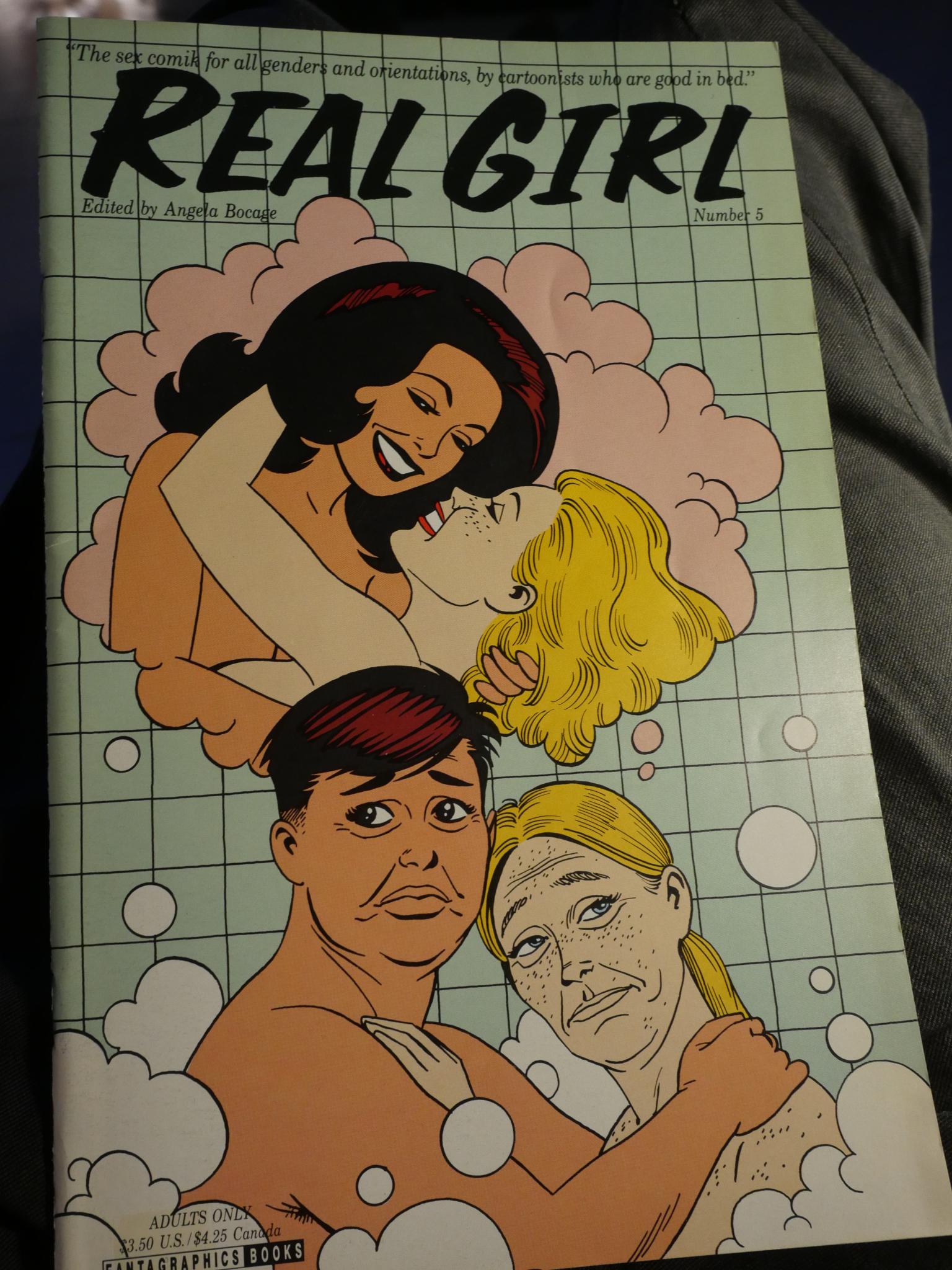 Trina Robbins is in all the issues, I think, and she does paper dolls every time. This double page spread has Gertrude Stein and Alice B. Toklas: 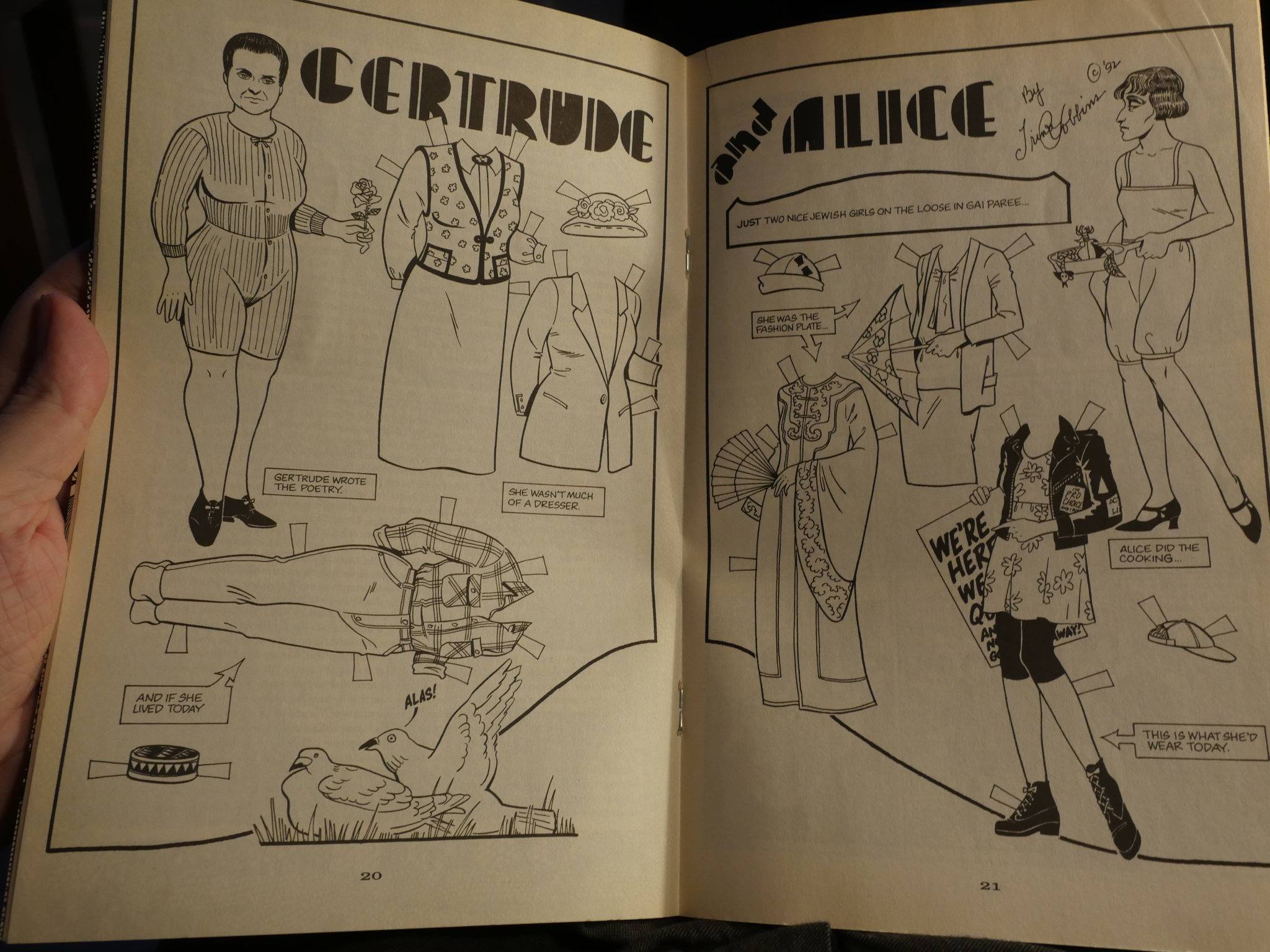 Get clipping and start playing. The great Anne Bernstein shows up with a wild story featuring actual sex. Well. Sort of. 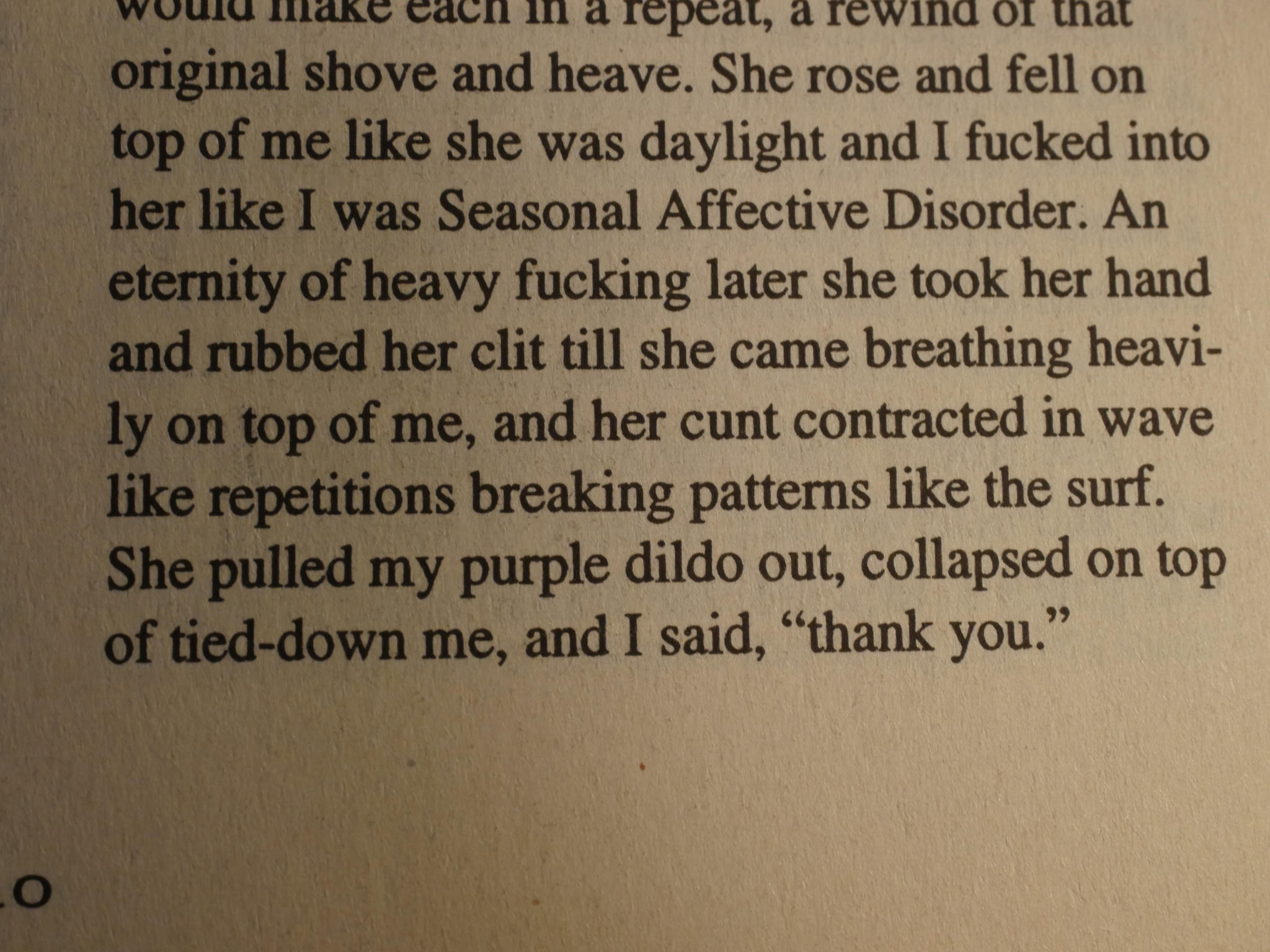 I mean the first sentence up there. The rest sounds quite normal.

In the editorial for this issue, Bocage mentions that the next issue will be the final one. It isn’t; there’s one more after that one. I think it might be the only time I’ve seen an editor prematurely announce the death of a series — they’re usually overly optimistic and predict a large and positive future, only to disappear into the ether.

One other fun thing about the seventh issue of Girl Talk is that half of it is taken up by the first issue of Girltalk: Here represented by the cover by the wonderful Fiona Smyth. This will spin off into its own book published by Fantagraphics, and I’ll be covering that later. But, in short, it’s a book created by artists mostly associated with World War 3, and it’s not hard to tell: 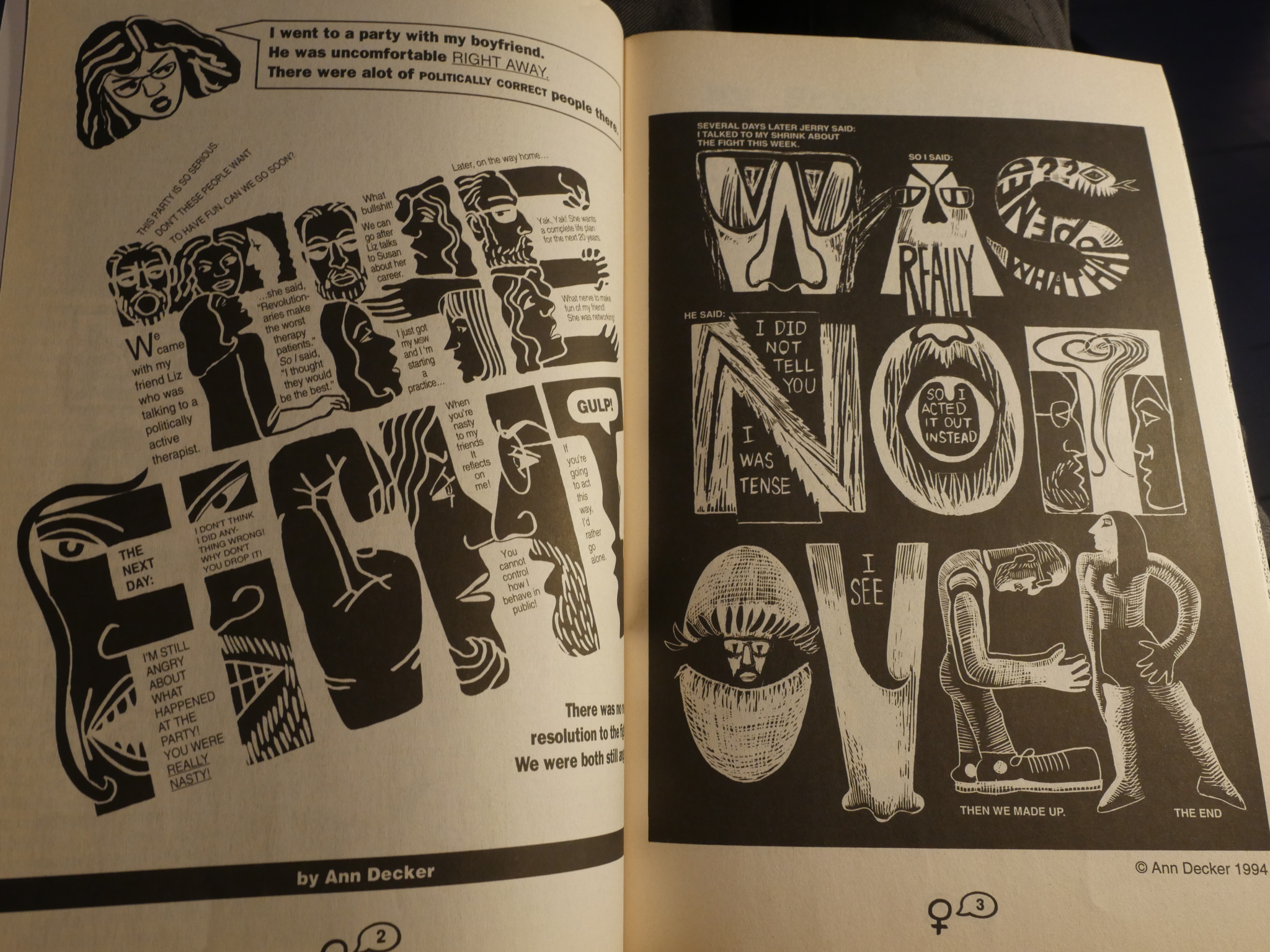 Most of the artists are quite interested in formal comic book stuff, while the parent book here (i.e., Real Girl) isn’t… that much… 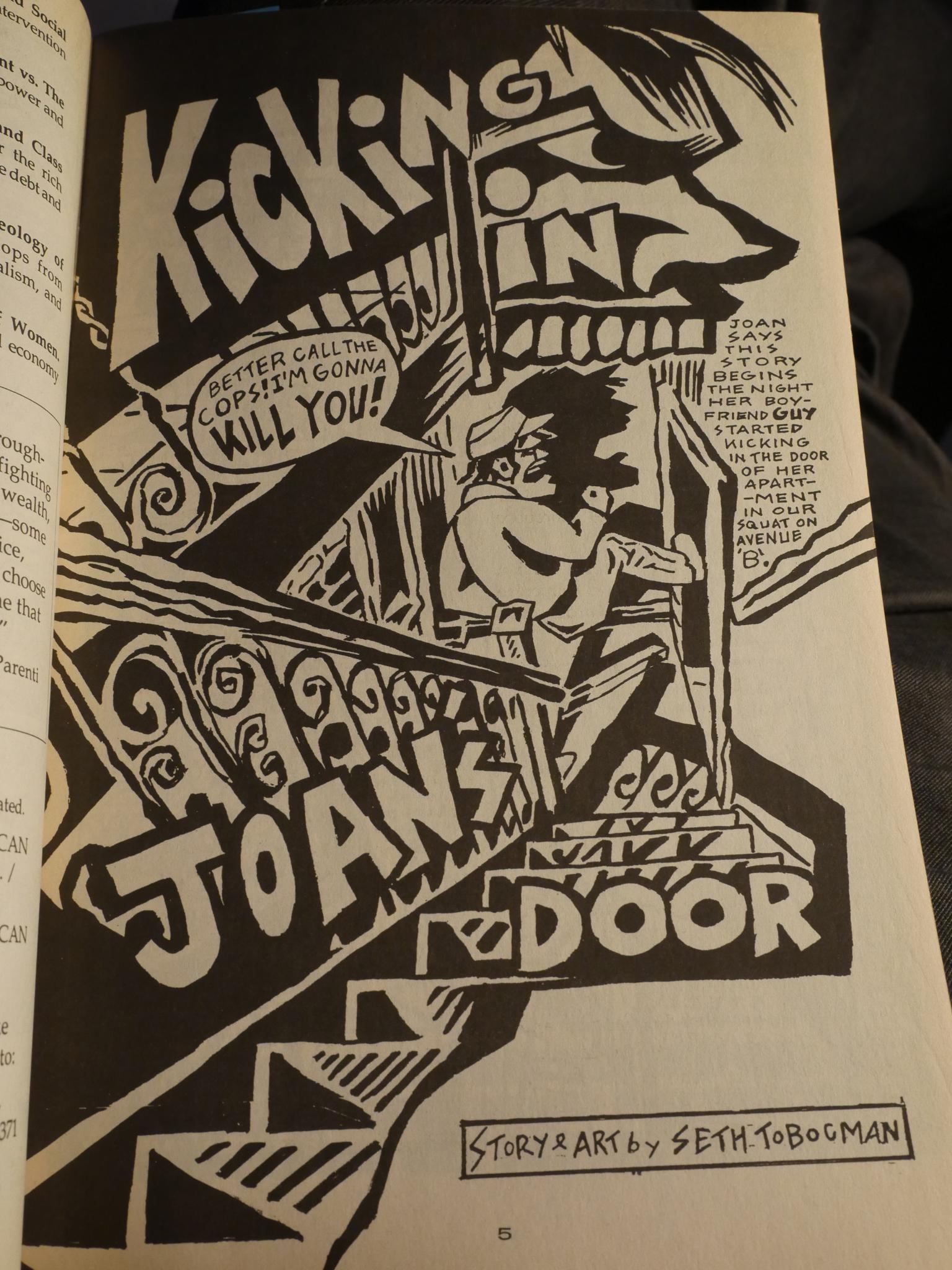 Speaking of which, the 8th (and originally final) book is dominated by a harrowing story by Seth Tobocman about that guy up there terrorising the titular Joan and an anarchist squat. Great stuff, but it’s weird to spend two thirds of this particular anthology on it.

It says that it was to be part of a forthcoming graphic novel, War in the Neighborhood, to be published “soon”. It was published five years later, and I think I have it here somewhere… but I can’t remember this story from that book. (I mean, if I did read the book.) Anybody remember? A Valerie Solanas paper doll from Trina Robbins this time.

The ninth and final issue is quite different from the other issues. Instead of having quite wordy, plot driven and often humorous stories, it’s mostly sex. 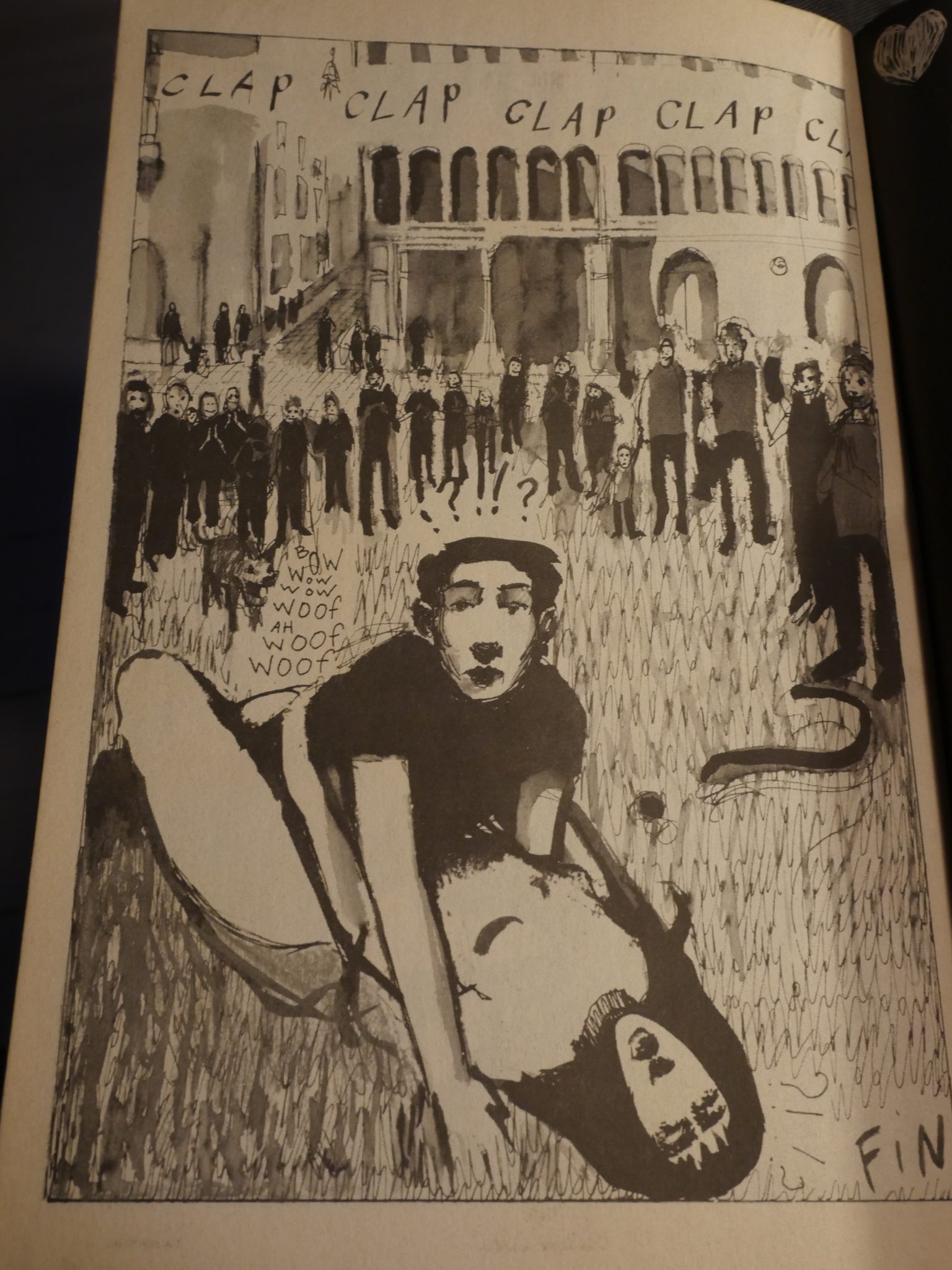 That’s Sandy Spreitz, an artist I’m not familiar with, but who does some lovely pages here… 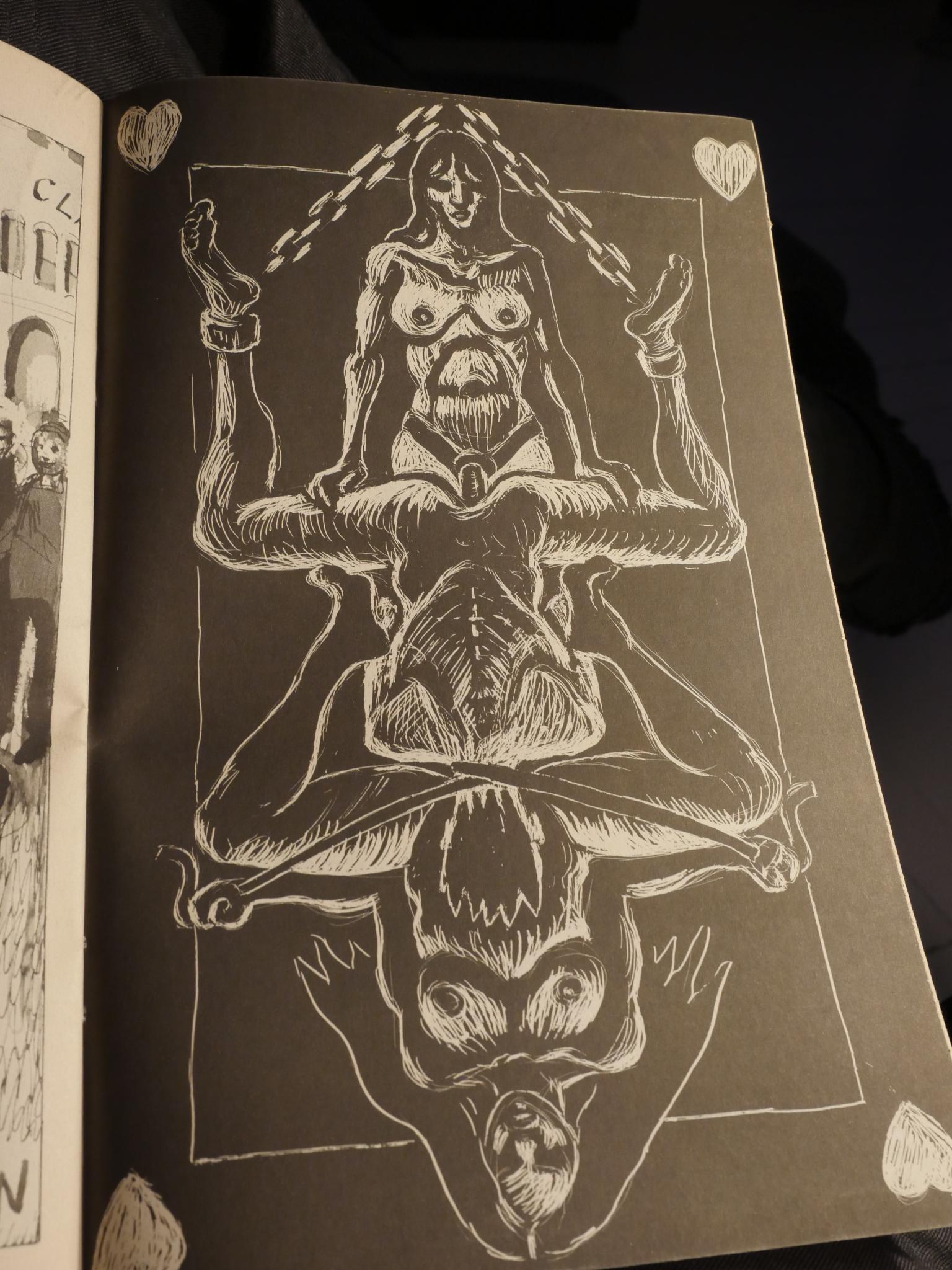 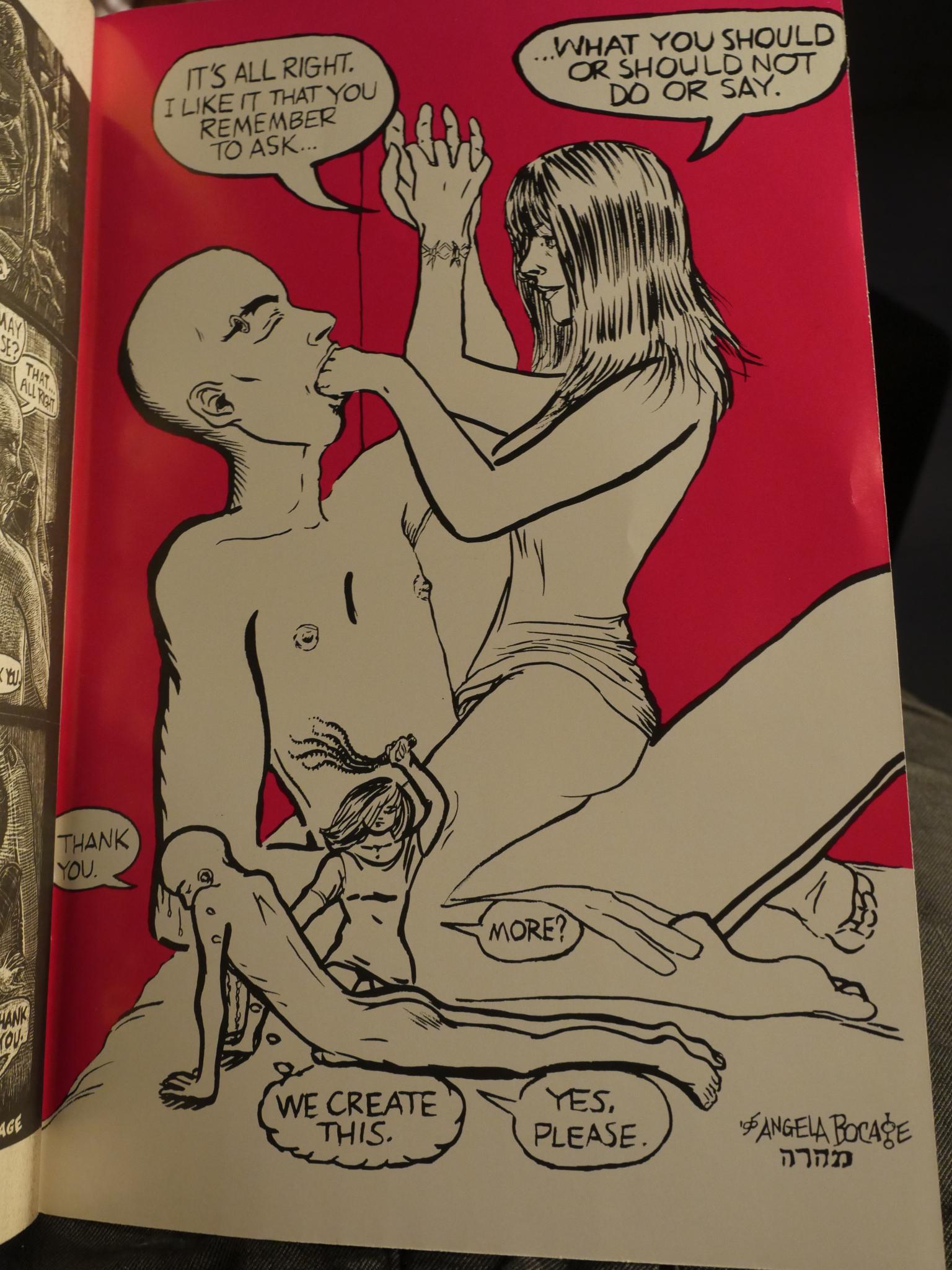 Anyway, there you go. Rereading this was quite fun. There’s an old school underground quality to most of the stories, but it can’t be denied that it’s, on the whole, quite uneven. But the interesting items more than outweigh the less scintillating tales, so… Good show.