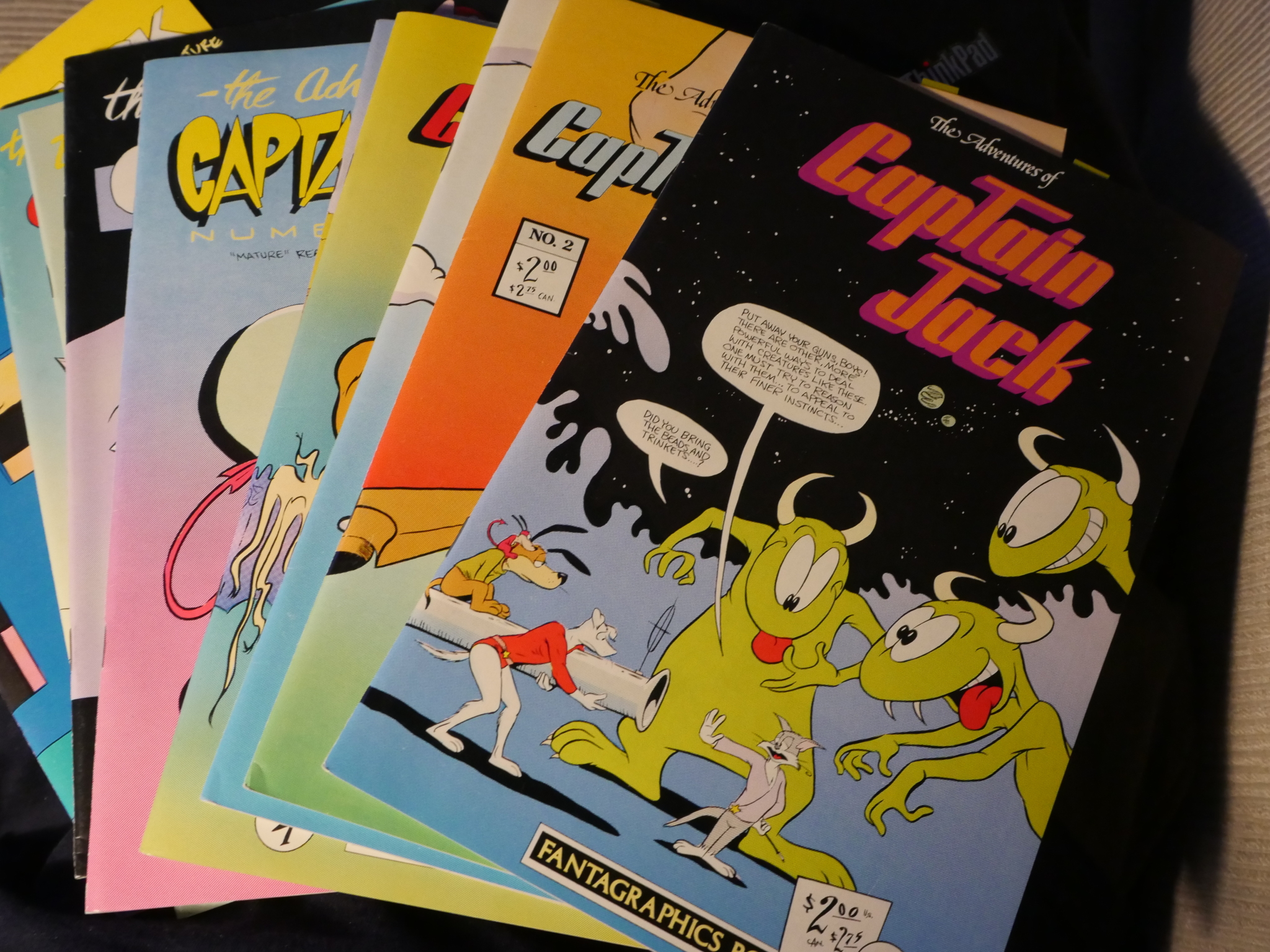 Kazaleh’s day job is as a storyboarder for animated films. It’s kinda obvious looking at some of the scenes, but it’s not all slapstick. Or much, even. 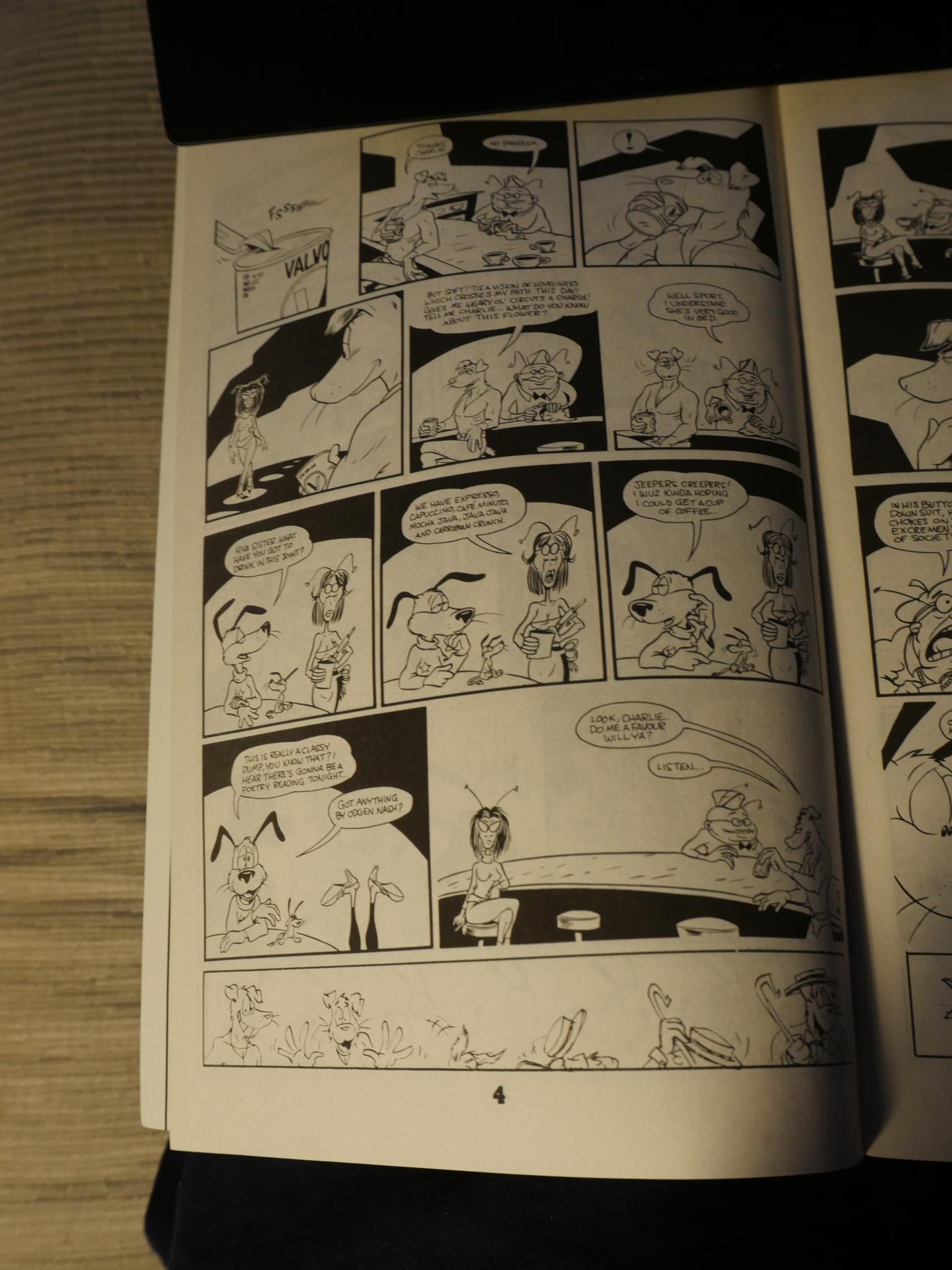 Har de har. The first half was also apparently drawn with magazine size in mind — it’s too wide, so he had to put a filler down at the bottom. (And the reduced size makes the letters kinda hard to read. Lawn: Get off it.) 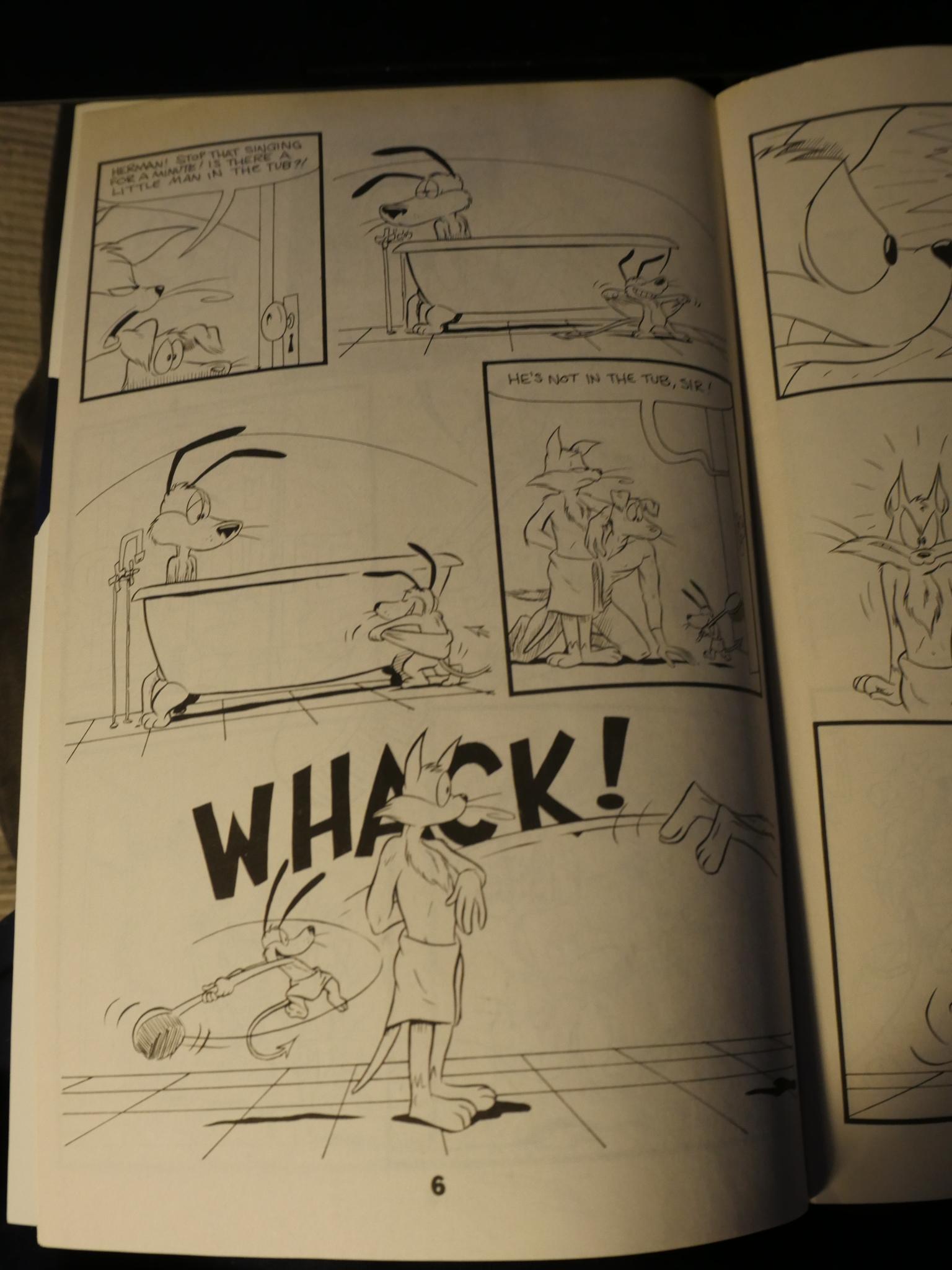 Slapstick! But starting with issue two, things veer off in a different, more soap opera like direction. And somebody’s thinking naughty thoughts: 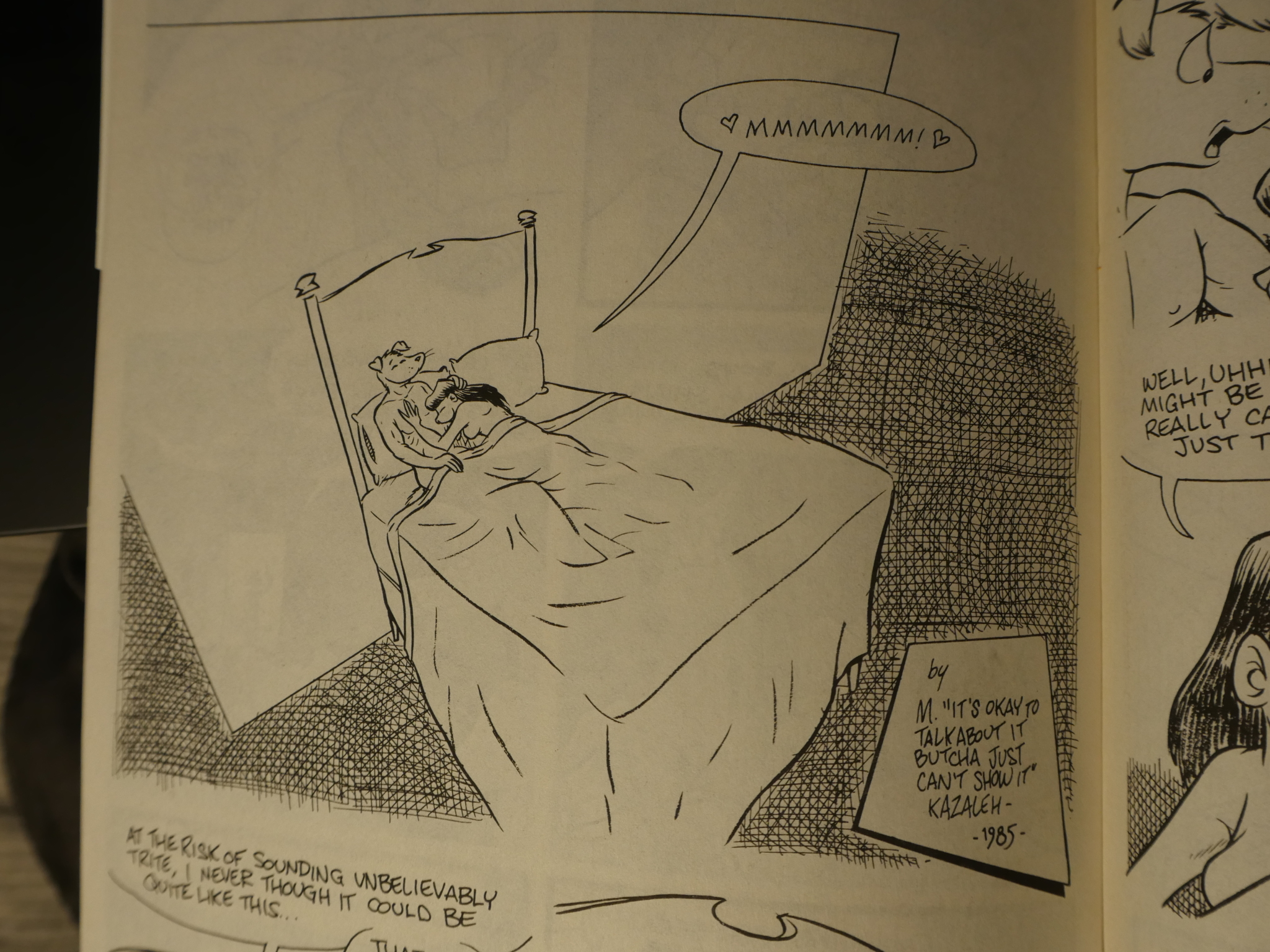 What could this “it” he’s talking about be!? 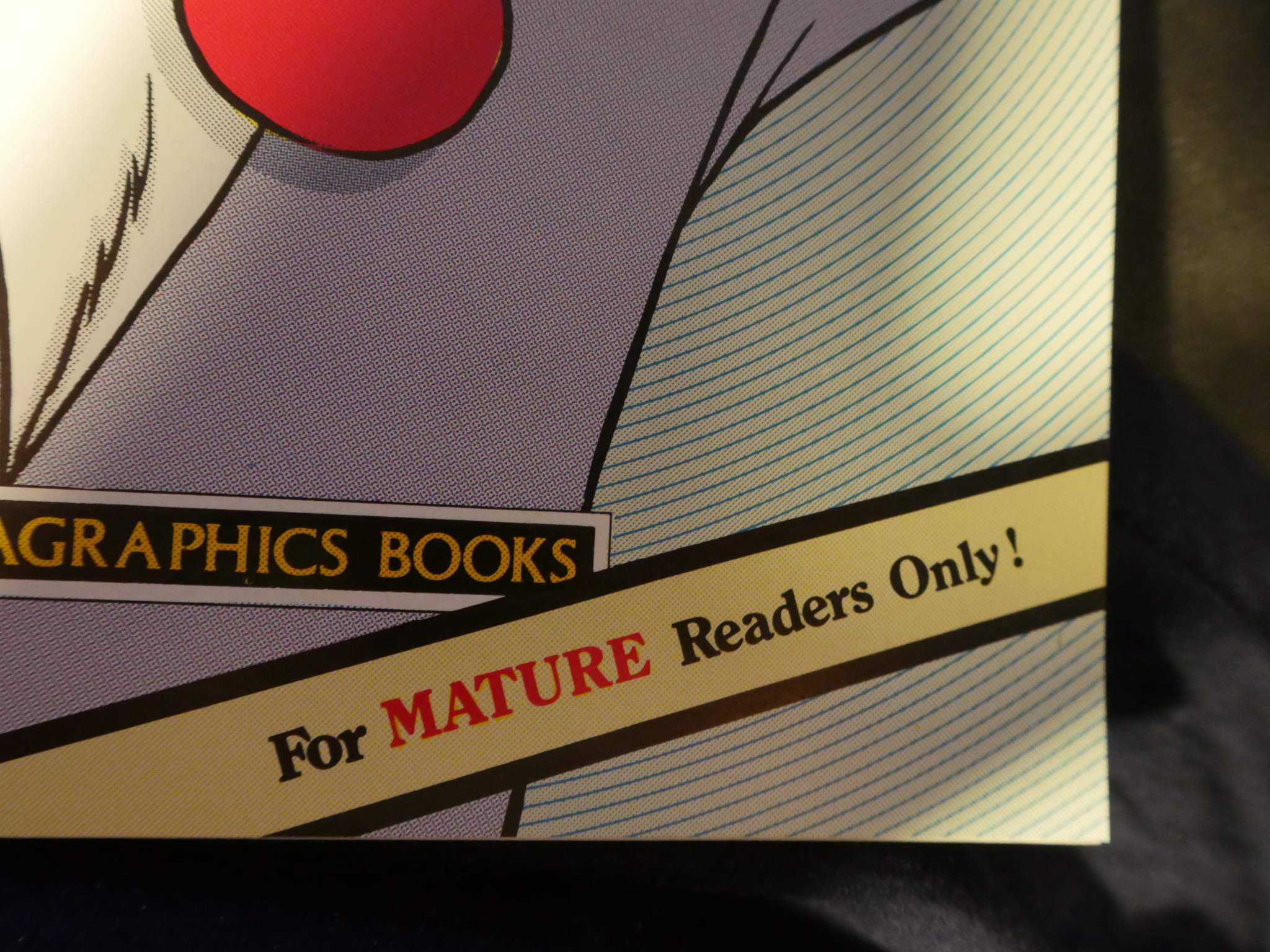 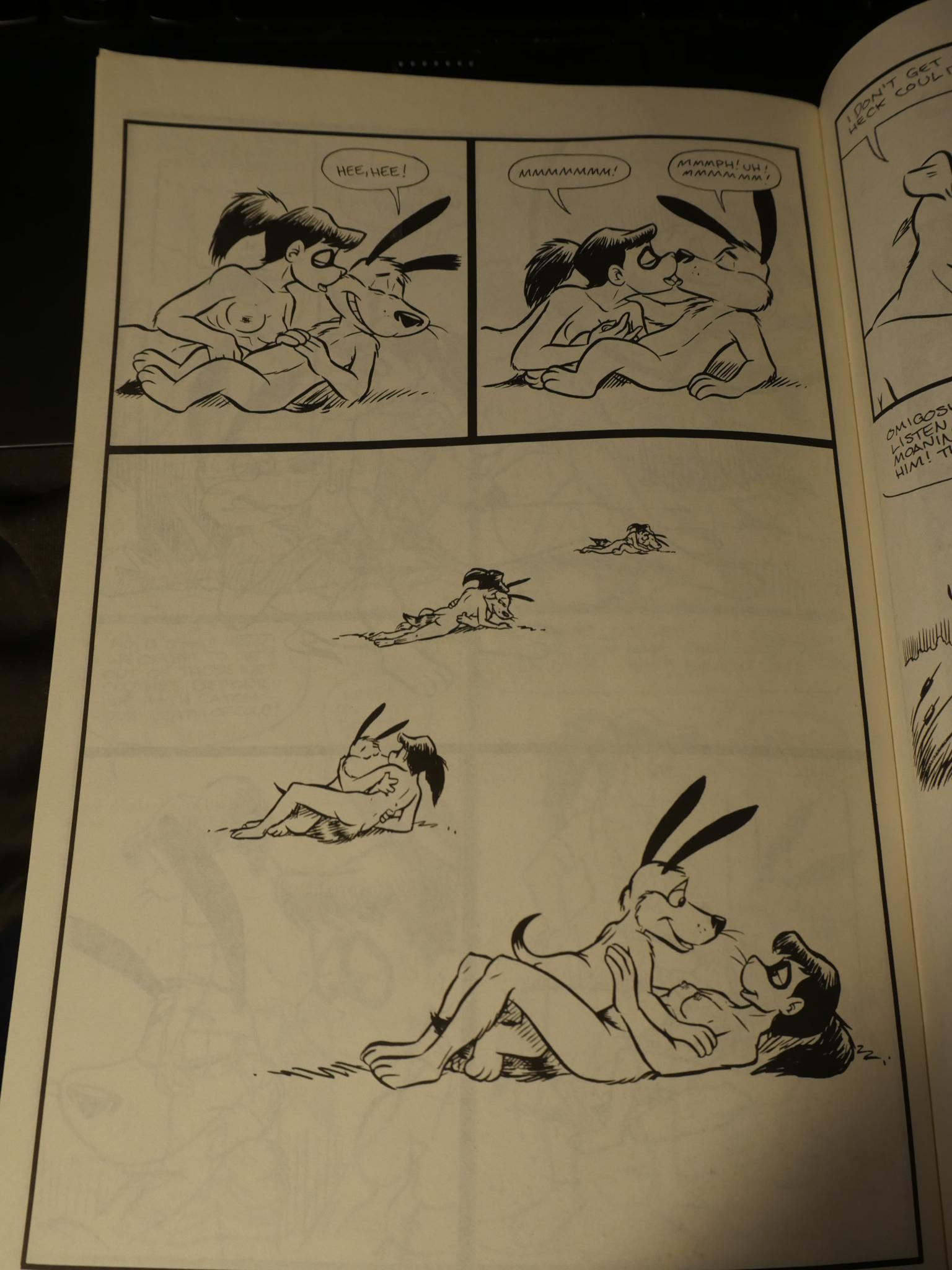 Aww. But I guess this makes Captain Jack more furry than funny animal…

Anyway, by this point, Captain Jack isn’t much about funny space heists any more. Instead it love and heartbreak and friendship and stuff. 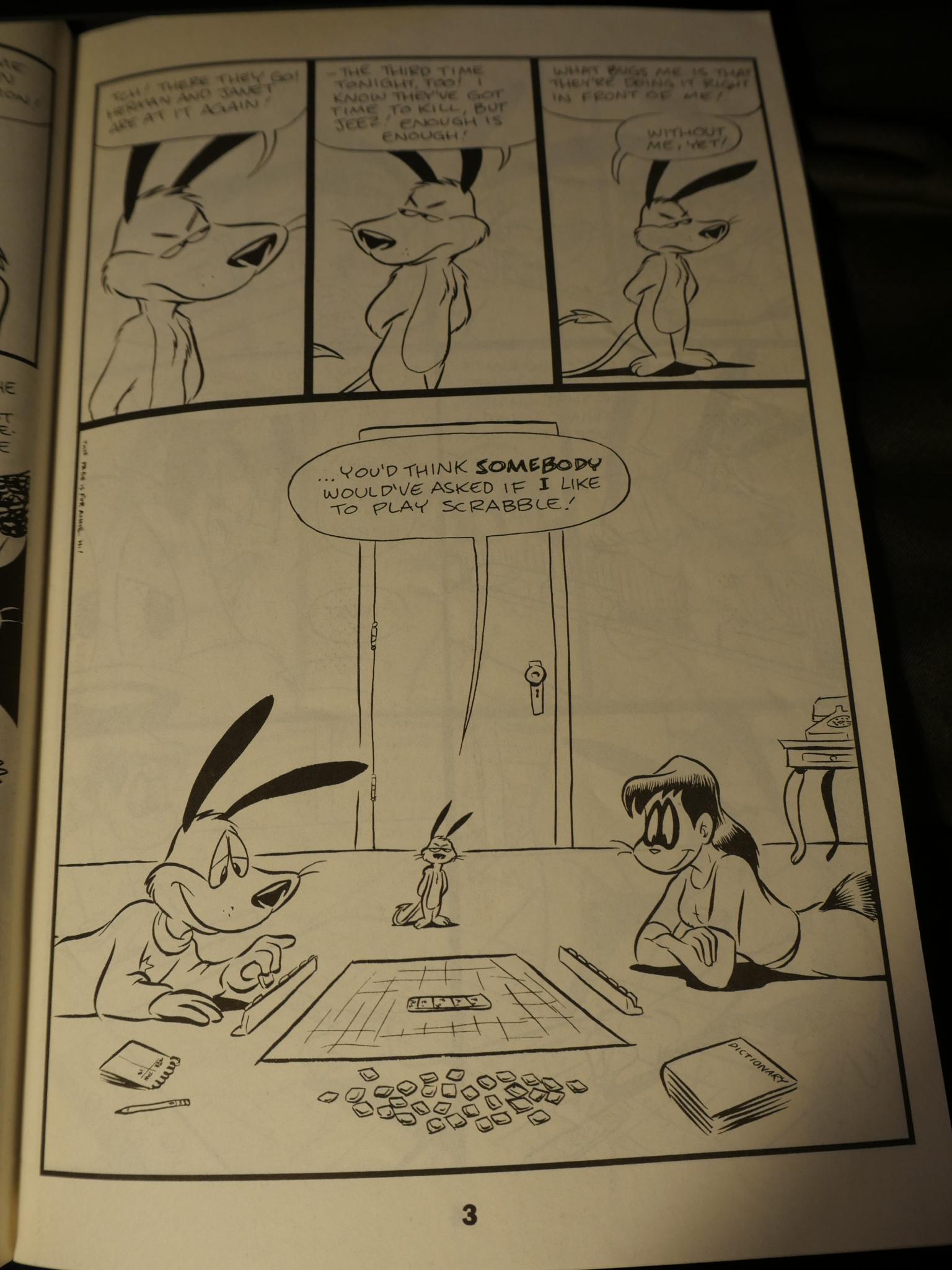 The artwork is as charming as ever, but the other thing I wanted to draw your attention to here is the paper the book is printed on. In the late 80s, Fantagraphics was experimenting with a variety of paper qualities, and for a while they settled on this thing.

It’s nice and white, but it’s so so so see-through. Not only does the image printed on the other side of the sheet peek through, but you can see the page after that page, too. It’s just madness. I remember feeling really put off by this penny pinching, even back then.

But there’s a reason: 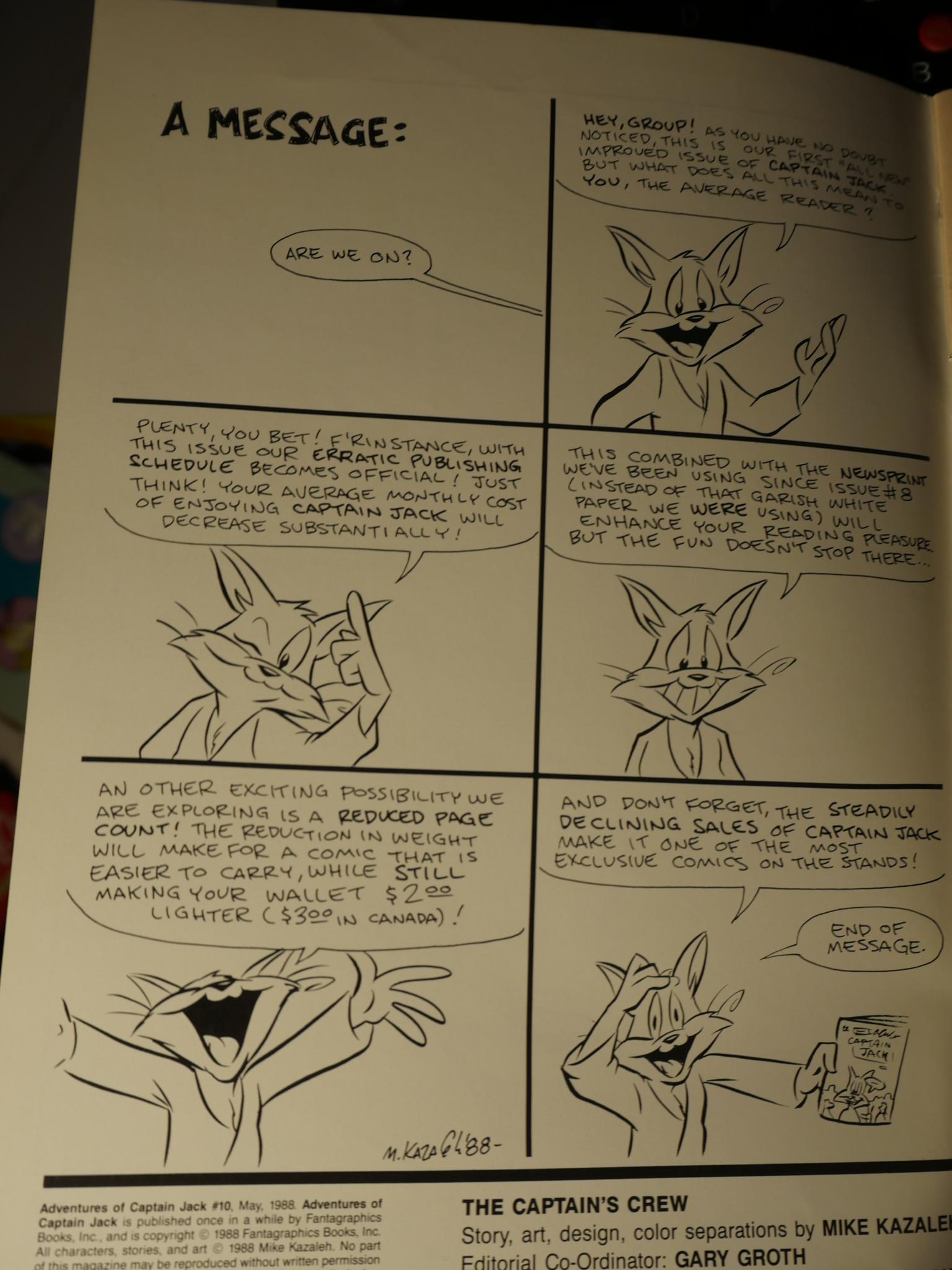 Captain Jack is selling so poorly that they’re switching to an even cheaper paper. But I think the newsprint is nicer, anyway: 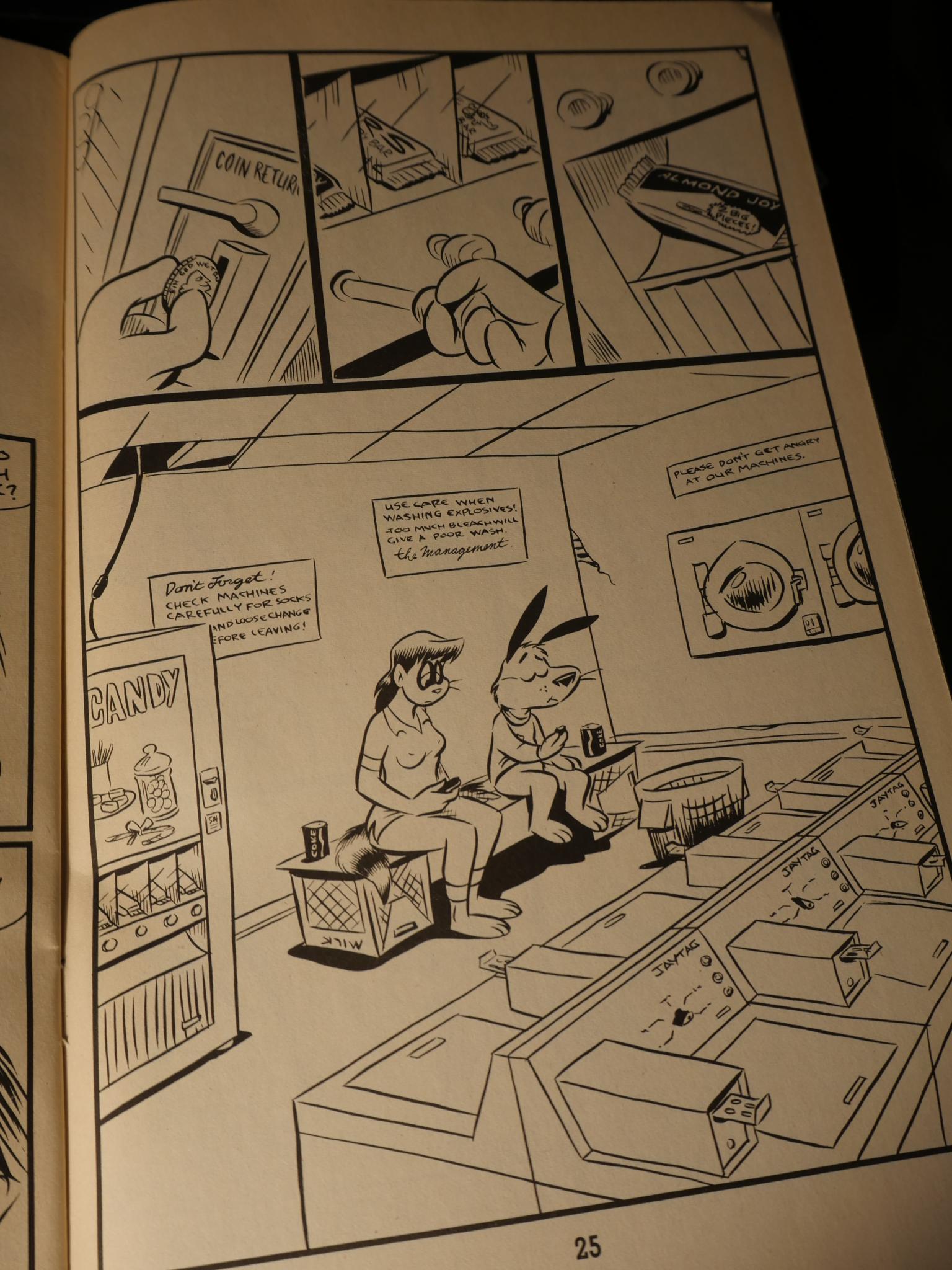 The paper isn’t white, but there’s no bleed through.

Oh! This isn’t Paper Quality News Weekly, is it? There’s a comic going on.

The last handful of Captain Jack issues is very down to Earth. (See! Joke! They’re on Earth, and it’s… Oh, forget it.)

It’s quite a way to go from having space jinx to sadly sitting in a laundromat. Perhaps the financial situation of the comic is being reflected in its contents… 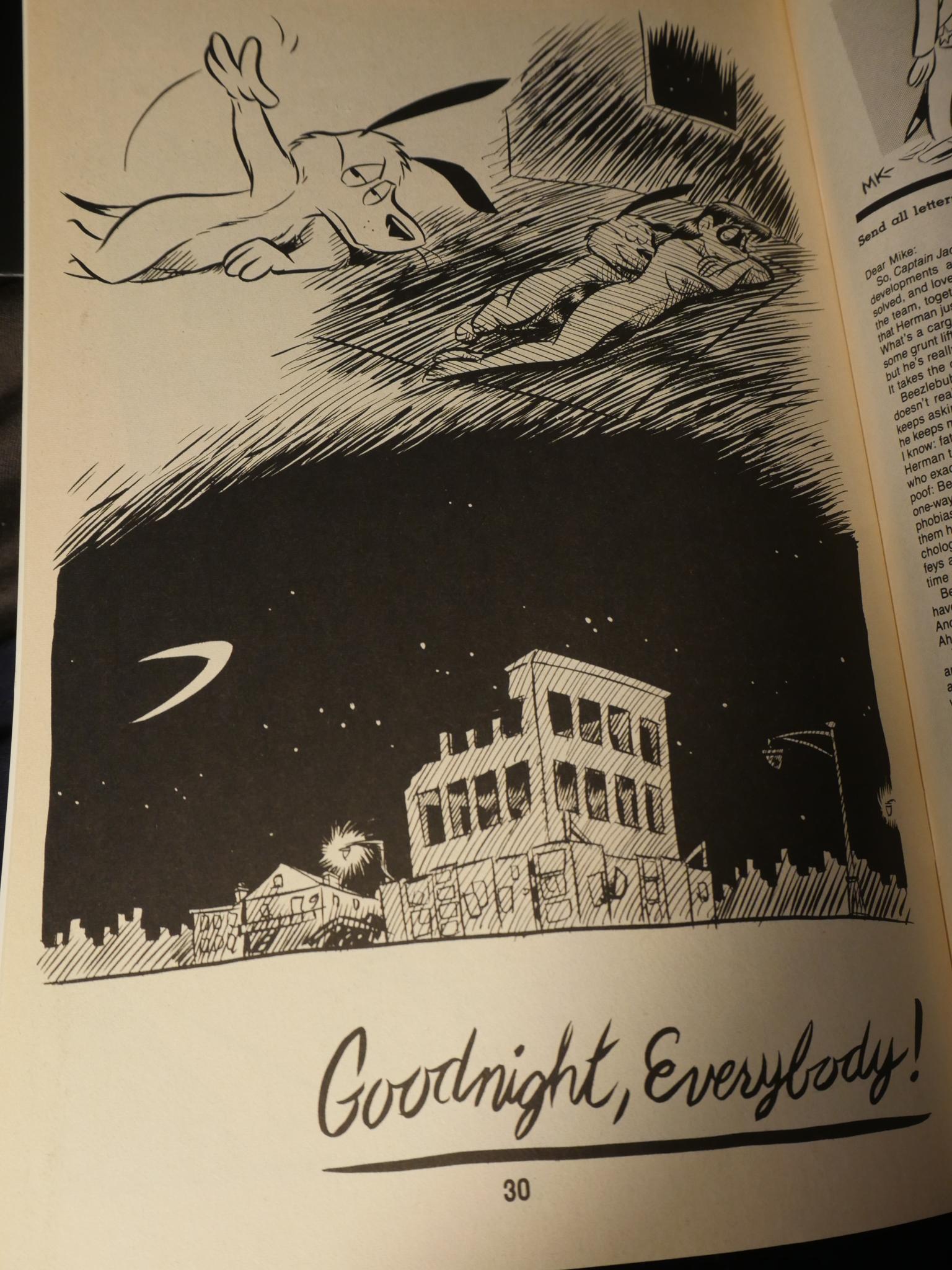 And then it ends with no resolution to the storyline. Re-reading this again, I must say I feel a bit let down. I mean, it’s a nice reading experience. I like the characters, I enjoy the art, it’s amusing… But it’s a let down. So let’s meet Hyper Al on the final back cover: 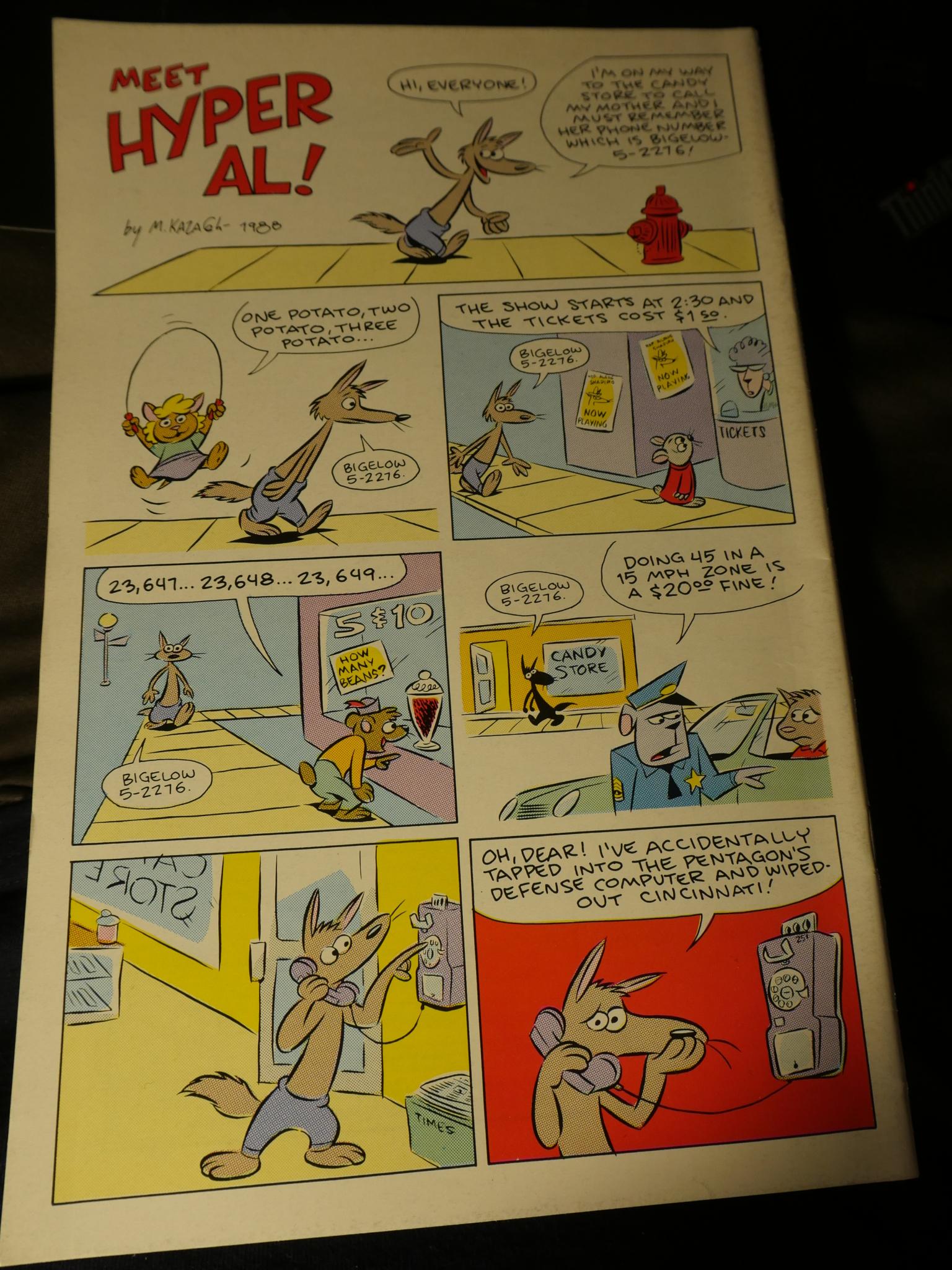 Or final? One special a couple of years later: 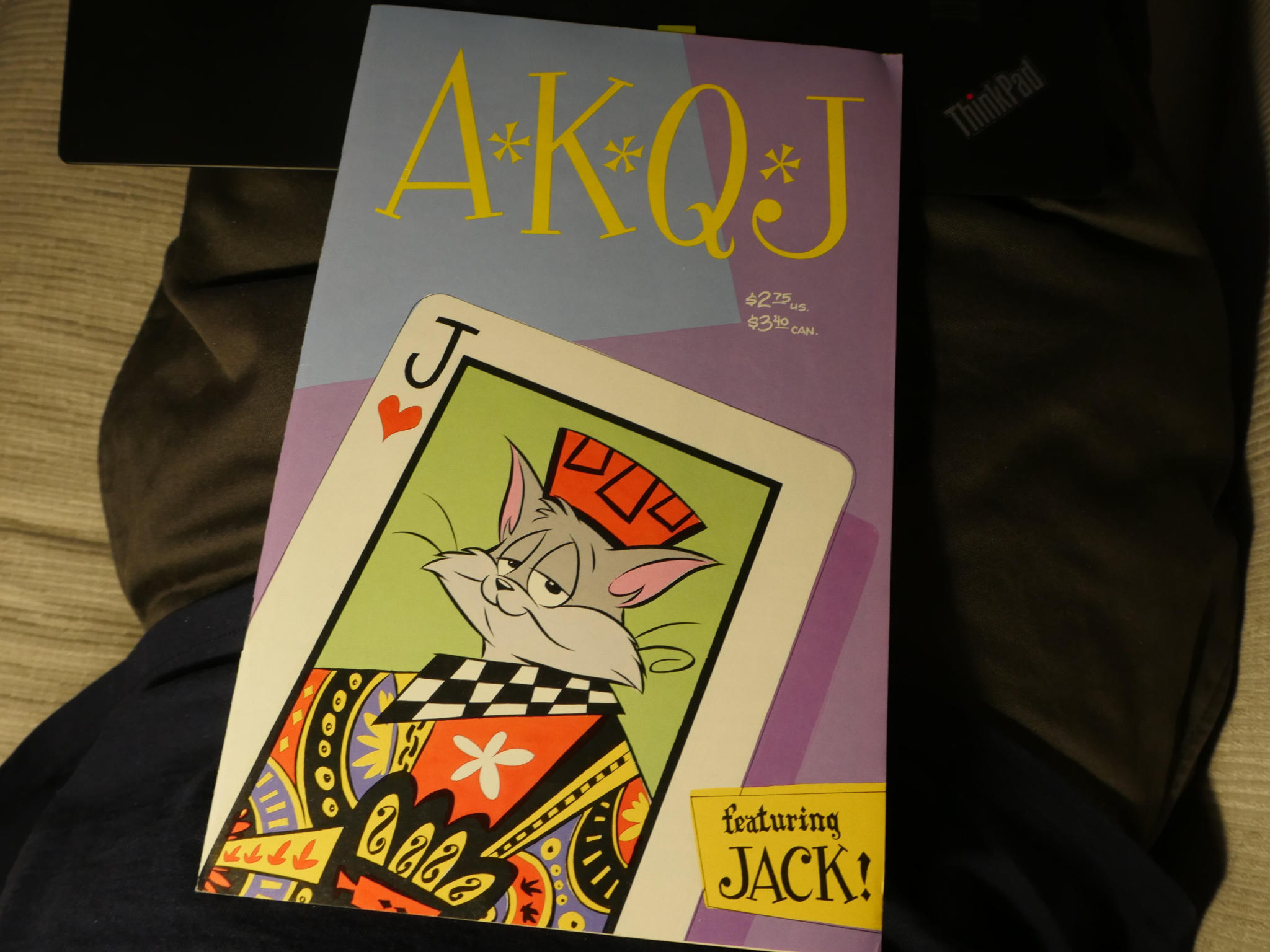 Will we get the plot resolved? Huh? Huh? 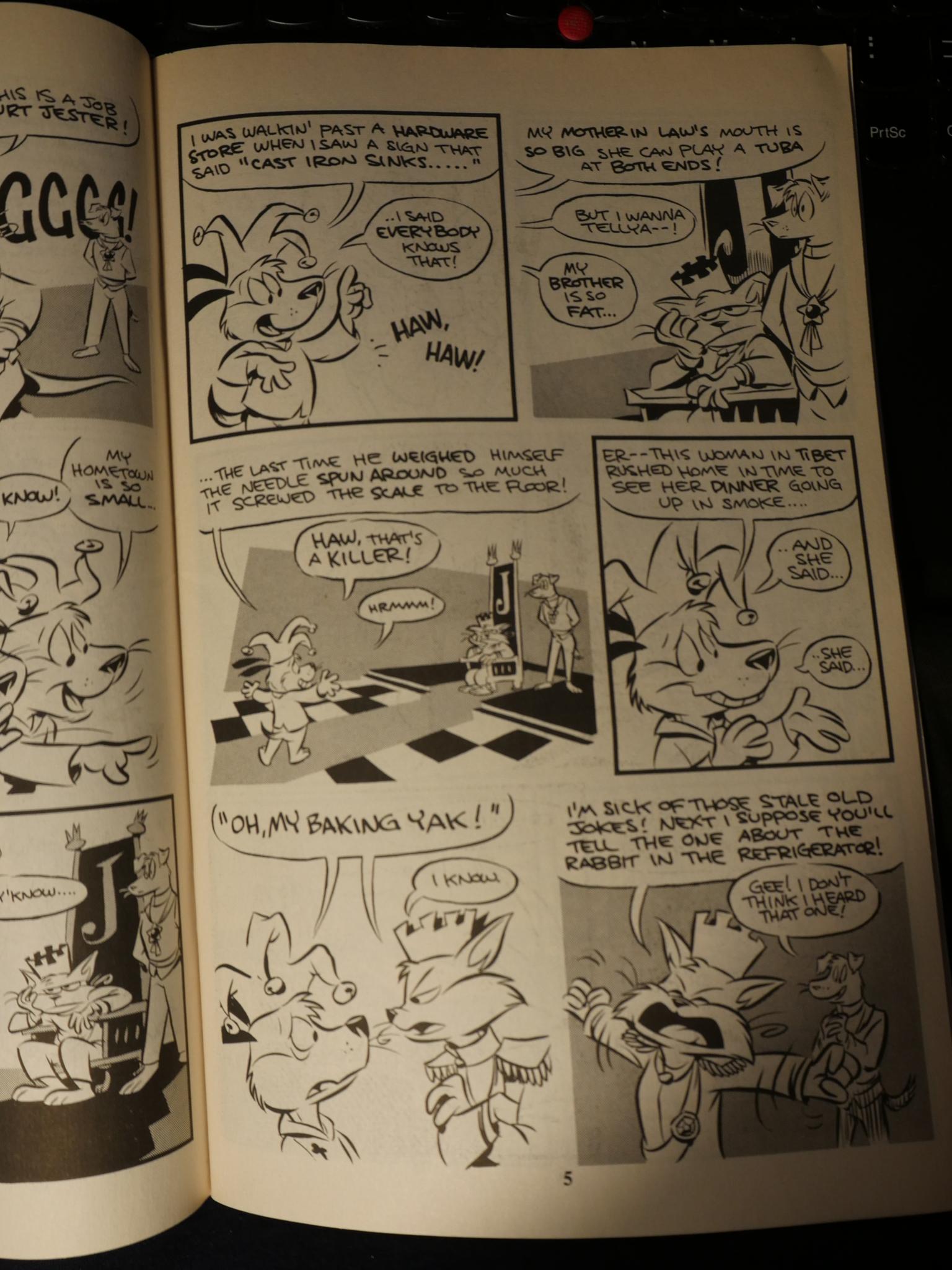 Kazaleh has published a number of one-offs since finishing Captain Jack, and is still working in animation last time I heard.