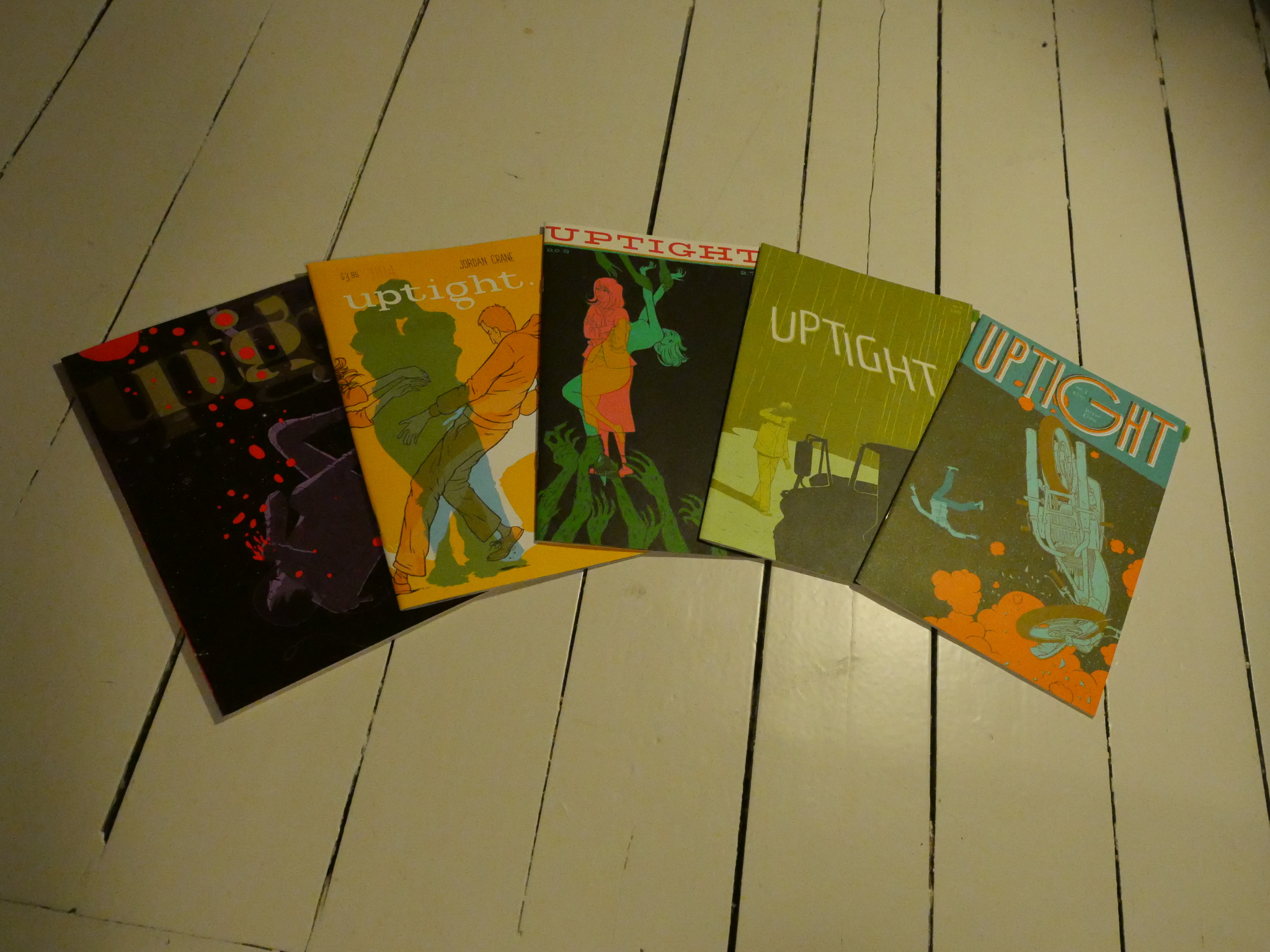 This is one the very last floppies Fantagraphics has published, and it doesn’t look much like Fantagraphics comic book comics usually look. There’s no verbose indicia (“any similarities to etc”), no UPC code, it’s cheap, the cover stock is the same as the interior stock, and the first three issues are only 20 pages each. (Well, plus the 4 from the cover. Everything has to be divisible by 8, you know.) 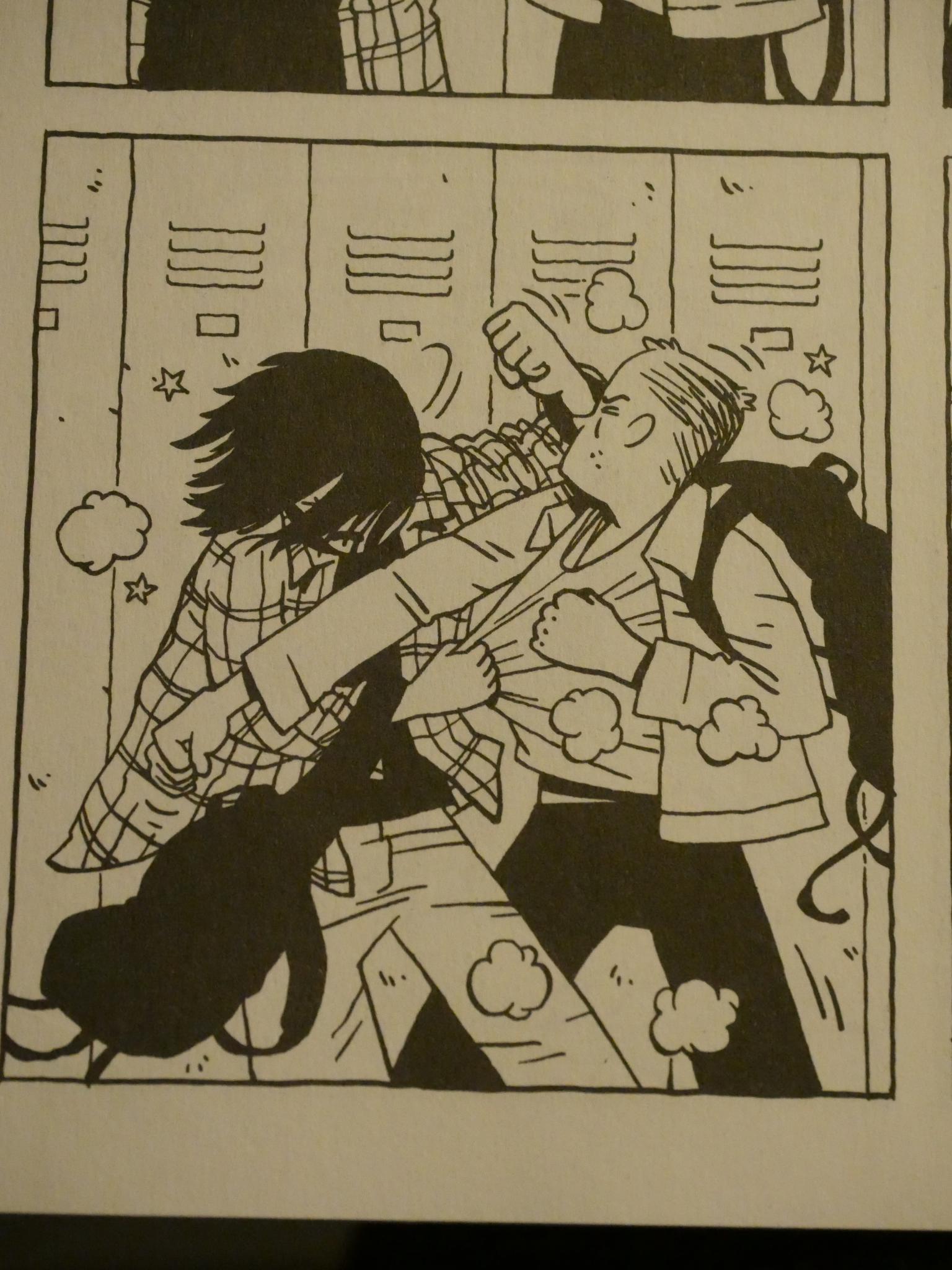 All of this makes me wonder whether this series is really more distributed by Fantagraphics than really published by them. Jordan Crane used to self-publish his work… Let’s see… Hm, didn’t the URL used to be different? Anyway, I’ve bought quite a lot of things from him directly, and his own things have pretty much the same aesthetic as Uptight. Although he screen-prints a lot of stuff instead of having it printed on an offset. 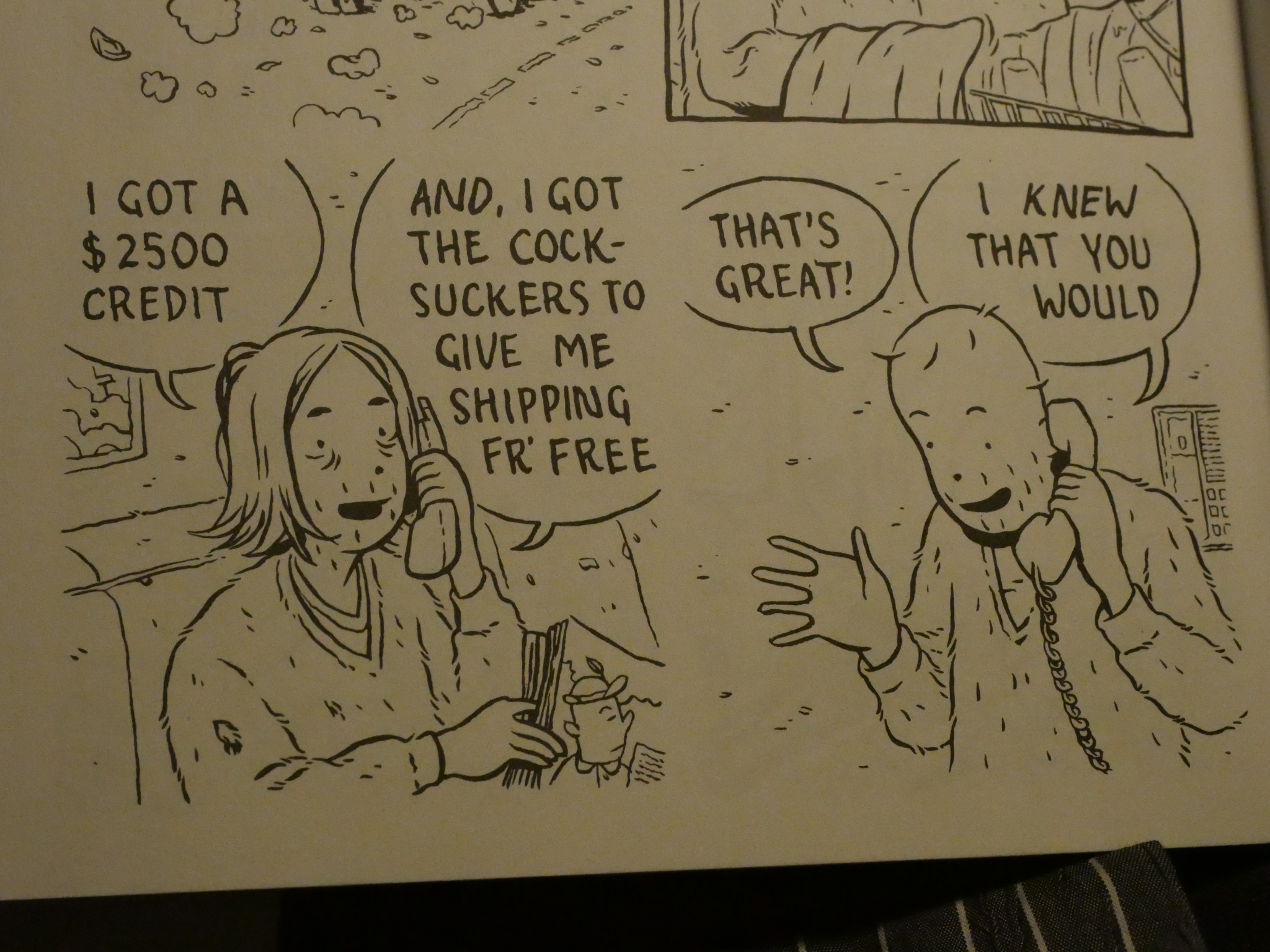 Anyway! Uptight started in 2006 and the fifth issue was published in 2015, so that’s a pretty lethargic publishing schedule. The main serial here is Keeping Two, which I’ve read before in a different format… Oh, yeah, he self-published it in a smaller pamphlet form. But wasn’t that a while ago?

Confusingly enough, Keeping Two isn’t concluded in Uptight, but I think it was in the pamphlets? So confuse. 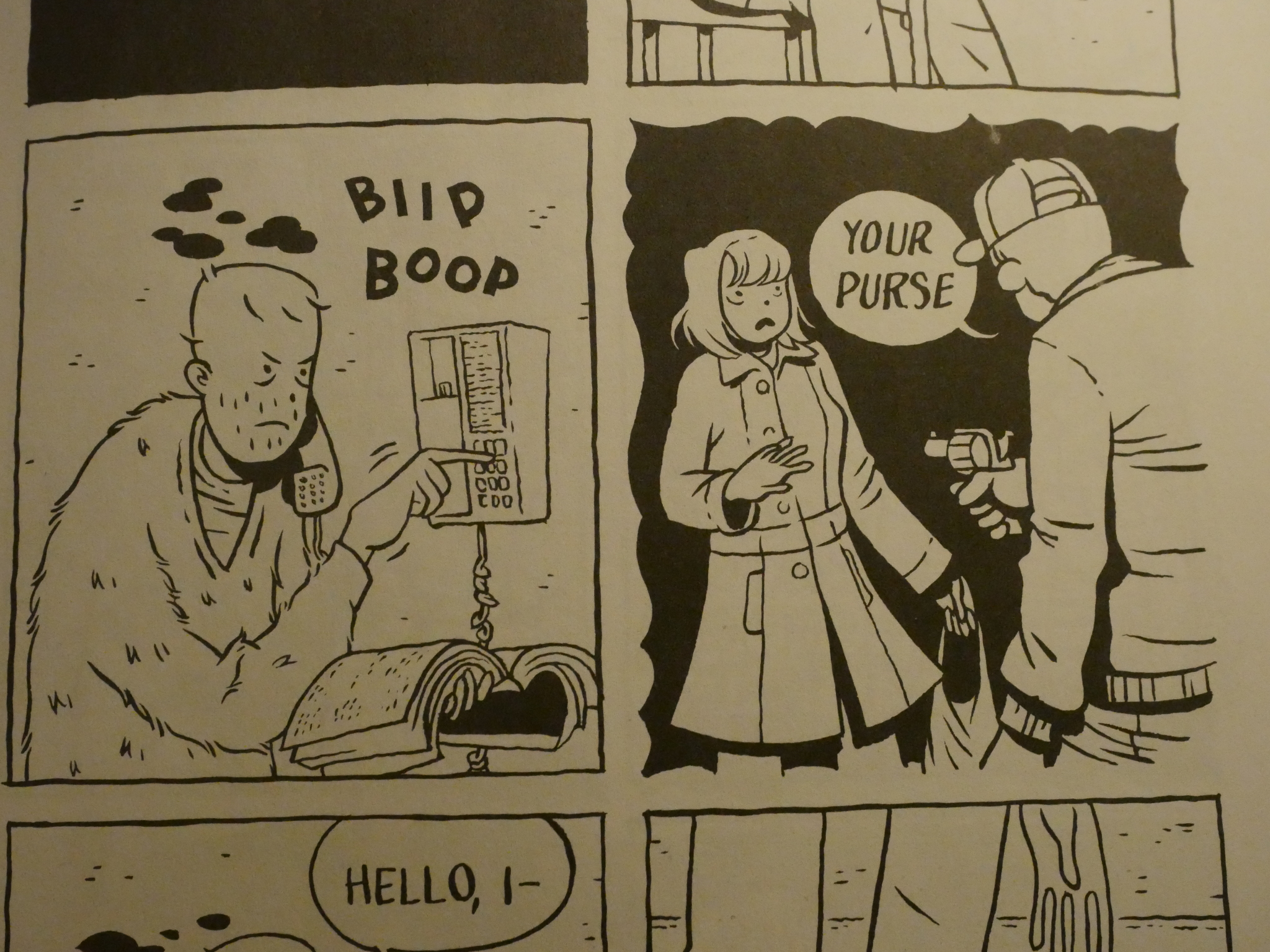 Anyway anyway! Keeping Two is about a guy sitting at home imagining what may be happening to his girlfriend who’s late, and stressing out completely. The shifts between reality, remembrance and fantasy are really well done: It’s almost always clear what’s going on, but it’s still unnerving how fluid this all is. 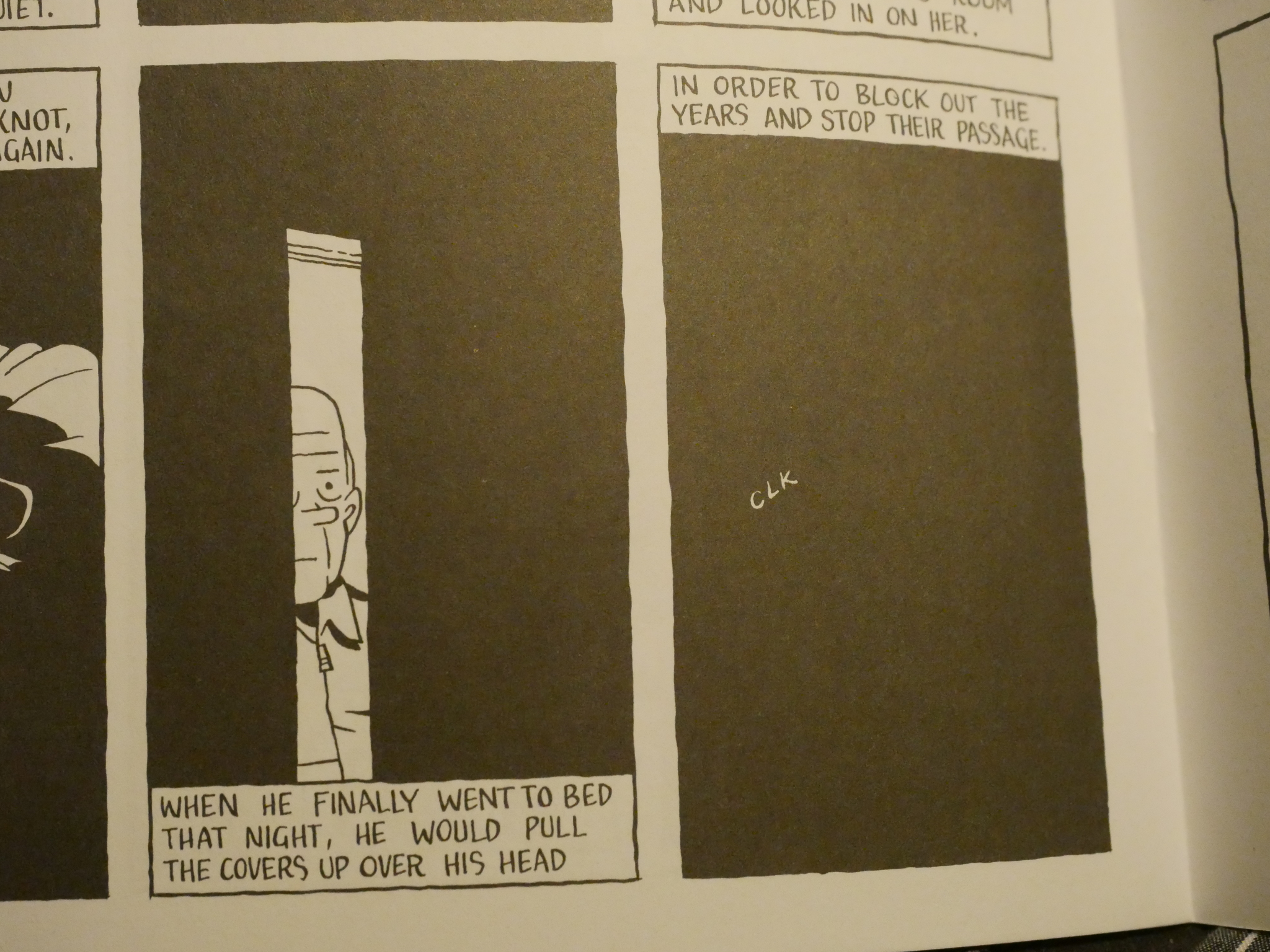 Crane switches between various art styles a lot. The Keeping Two one uses nose-less faces, for instance, while his other pieces don’t. There’s a prevailing feeling of unease and melancholy in all of the stories, though, even the funny ones. 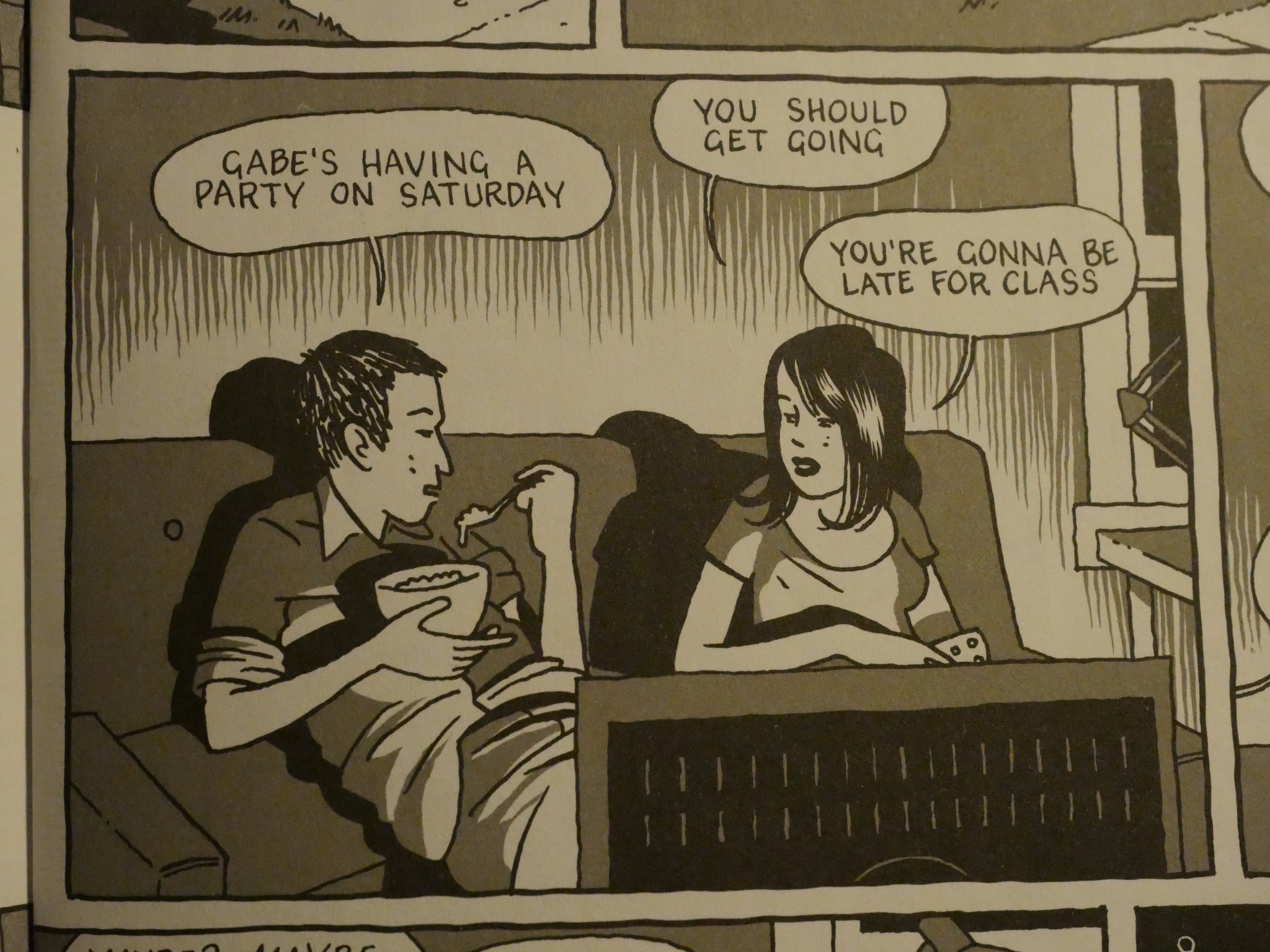 This story, about a guy who imagines (perhaps) his girlfriend being unfaithful is very handsomely rendered, and again very differently from the other pieces. However, I did find the “guy obsessively pondering his girlfriend” repetition somewhat worrying: By returning to the same theme in the same issue, the reader may well start thinking more about Crane’s motivations than the characters’. 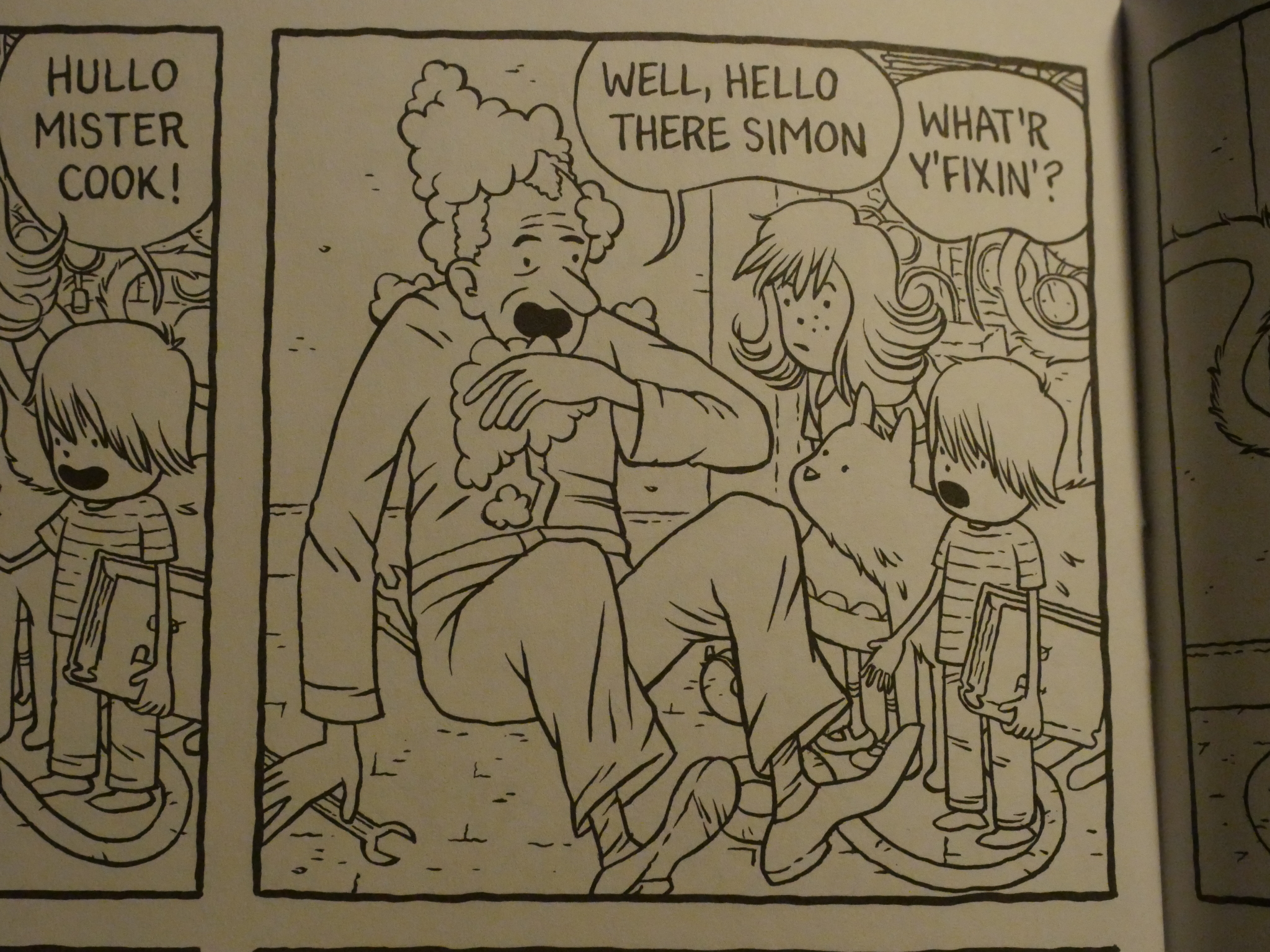 And then there’s this really goofy and funny story about these kids (and their cat) getting lost in the air conditioning system at their school, drawn in this open, bright style. 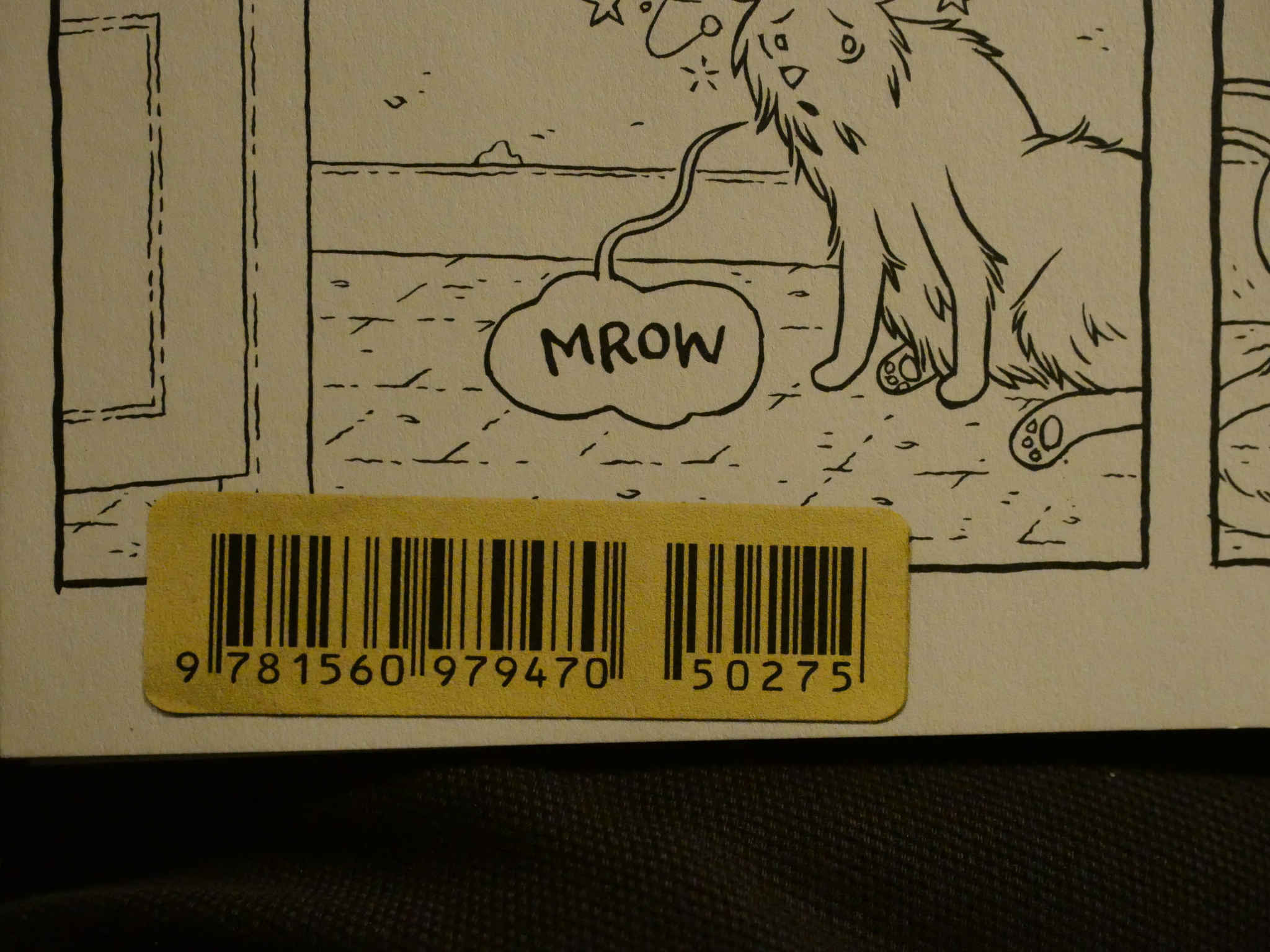 When I reached the back cover I thought “hah! Fantagraphics put some UPC stickers on there!” and then I started scratching at it with my nails. And it’s not a sticker! It’s a perfect trompe l’oeil of a sticker. You can tell that Crane is a designer. 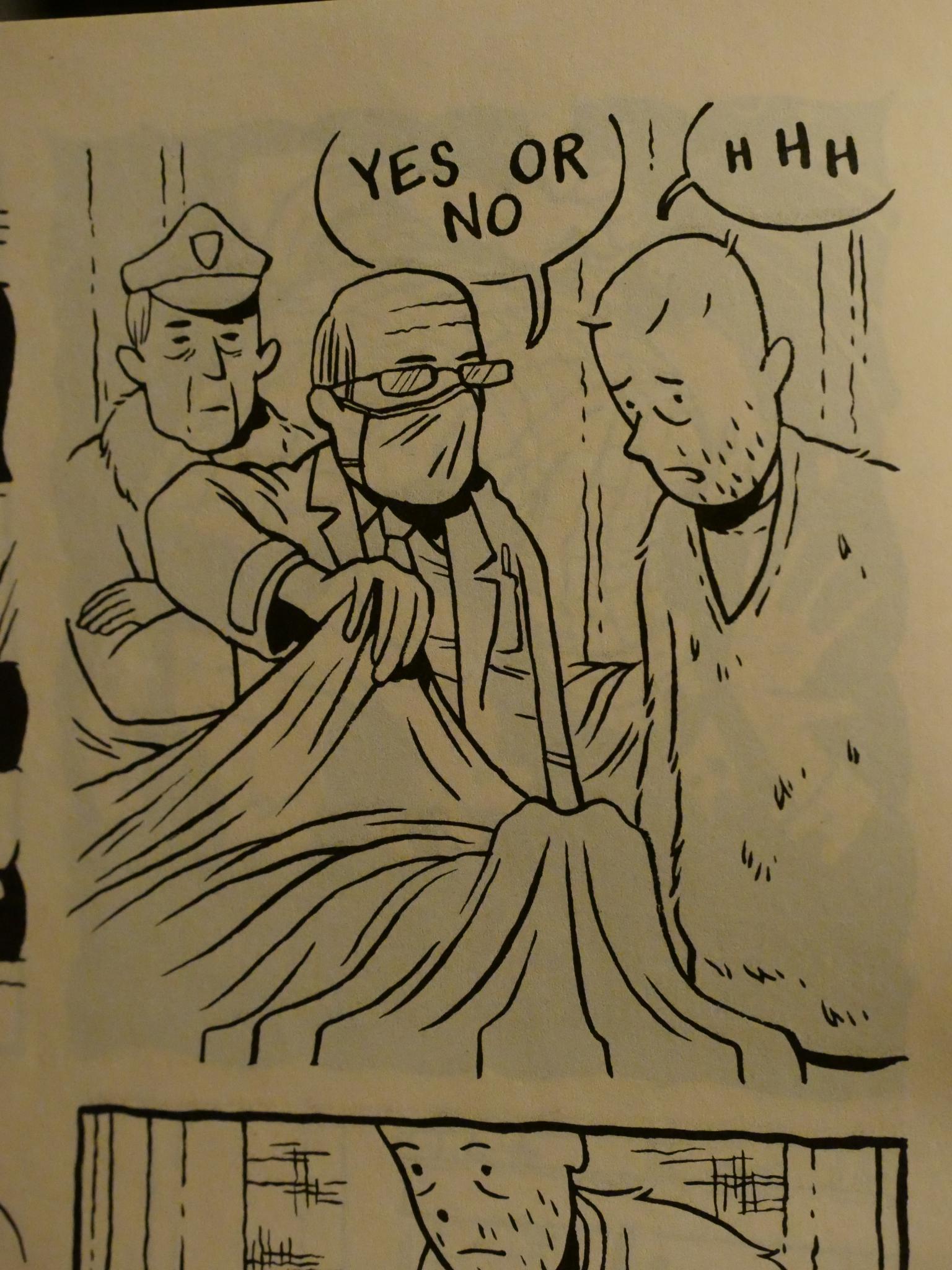 And then we’re on to the fifth issue, which isn’t a thin floppy at all, but a hefty squarebound one. While all the previous issues were printed on thick, absorbent paper (in Canada), this one is printed on thin, shiny paper (in South Korea). The paper is so thin that there’s a lot of bleed-through, and the whole thing feels rather read. As a physical object, I mean. 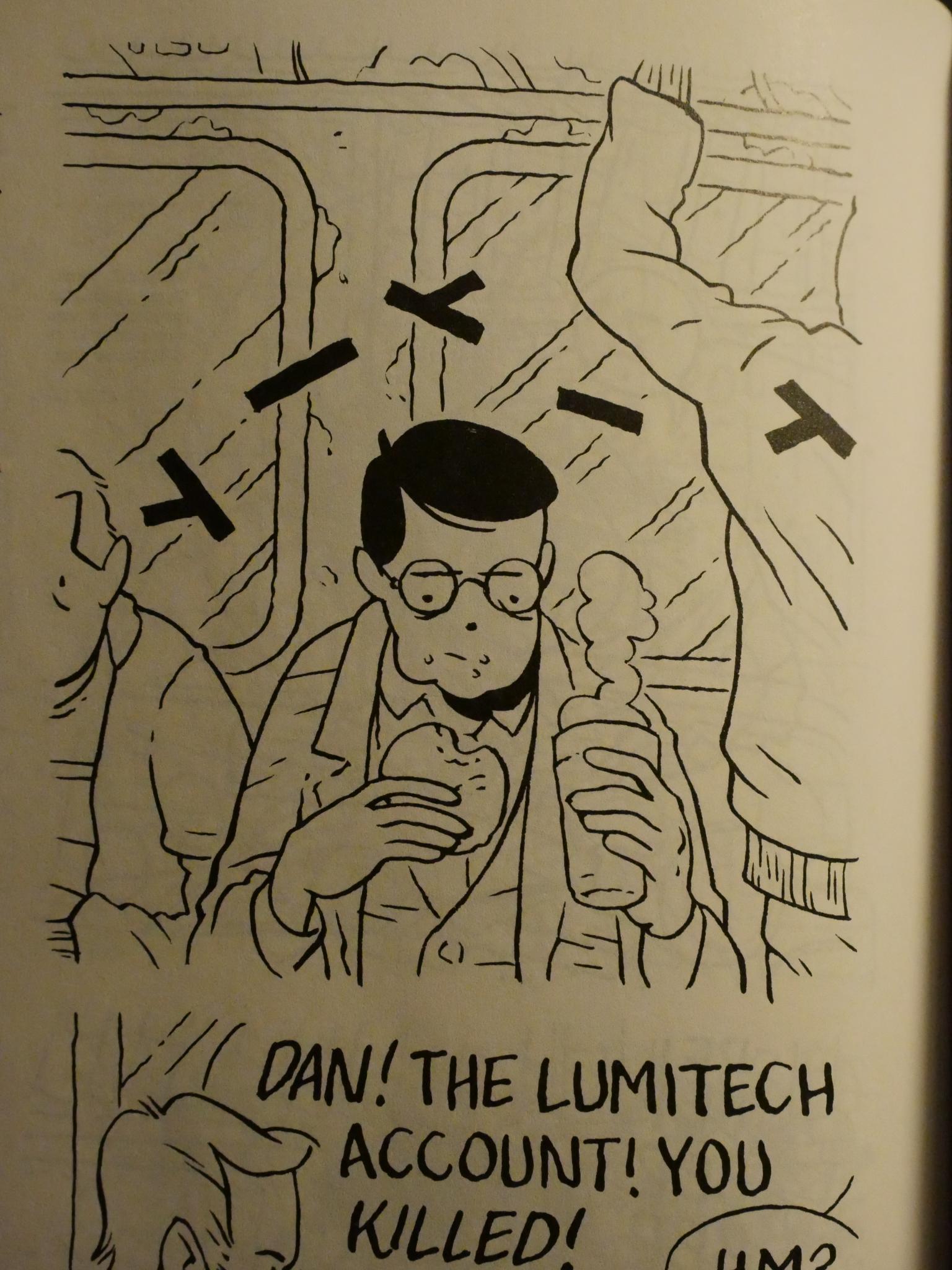 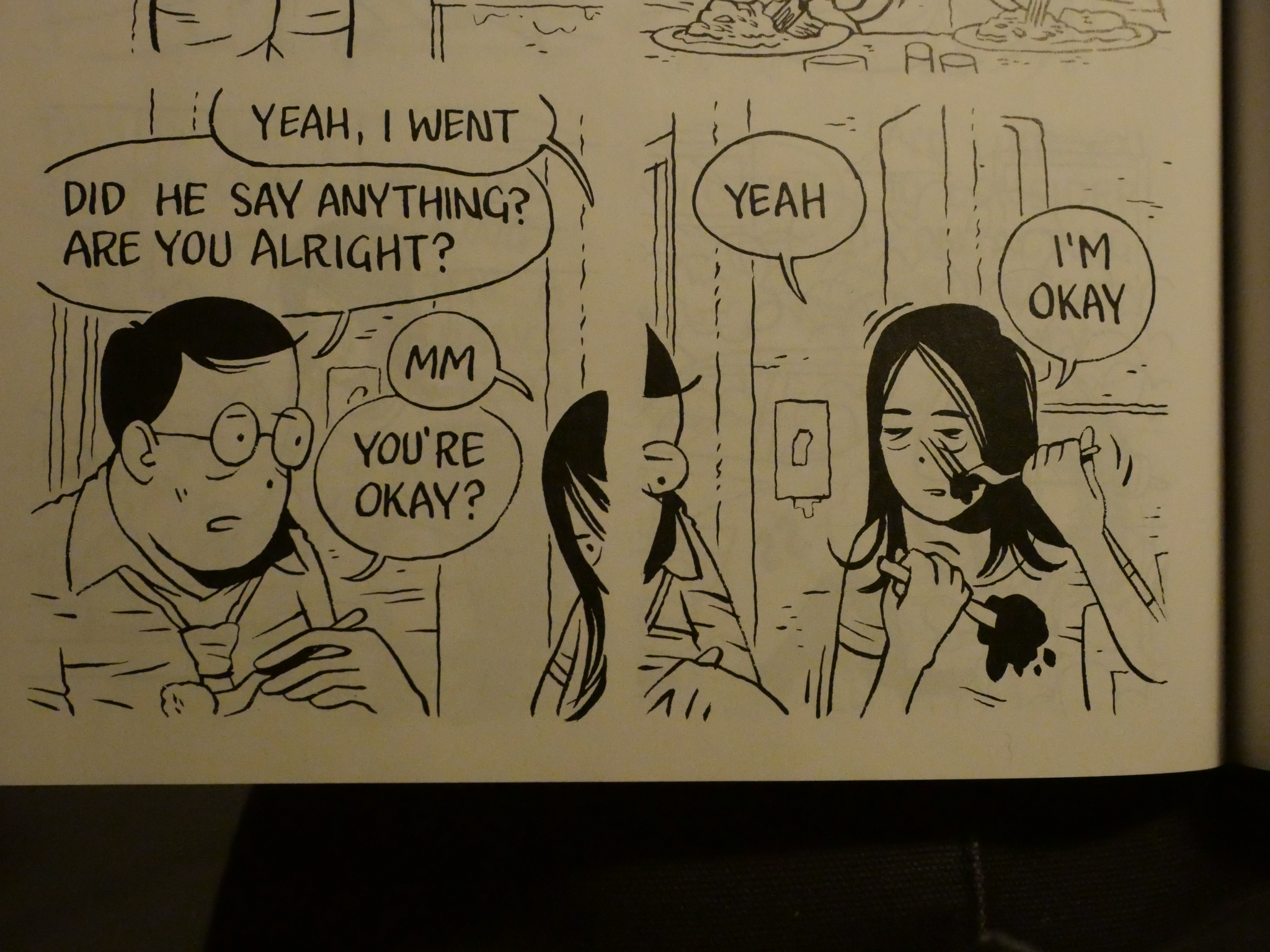 This is still from the Keeping Two serial, but this is from the bit where the protagonist is chilling out by reading a book, and this part is from the book he’s reading. I think.  So we have these shifts between reality and fantasy (or rather, depicting the emotional state graphically) in the story-in-the-story, too… 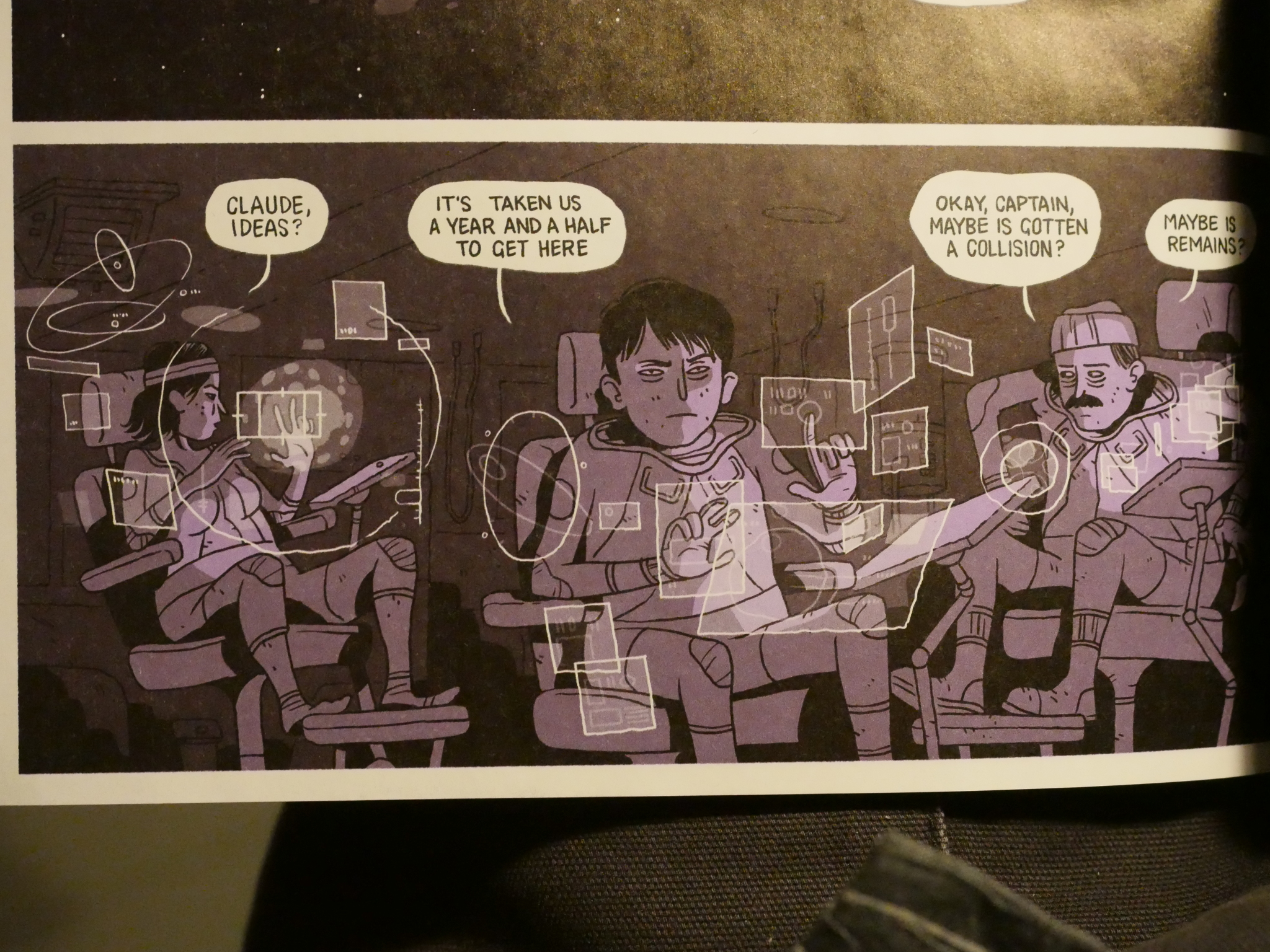 And then there’s a sci-fi thing in colour. More loss and despair, of course, but that’s what we like.

Hm… but what’s Crane up to these days? Hm… Wow. That’s a much expanded version of Keeping Two as a web comic? Huh.

Oh! Wikipedia claims that Keeping Two will be getting a collected release in 2017. Well, that makes sense. I’m looking forward to it, and it’ll be the third time I’m buying it.