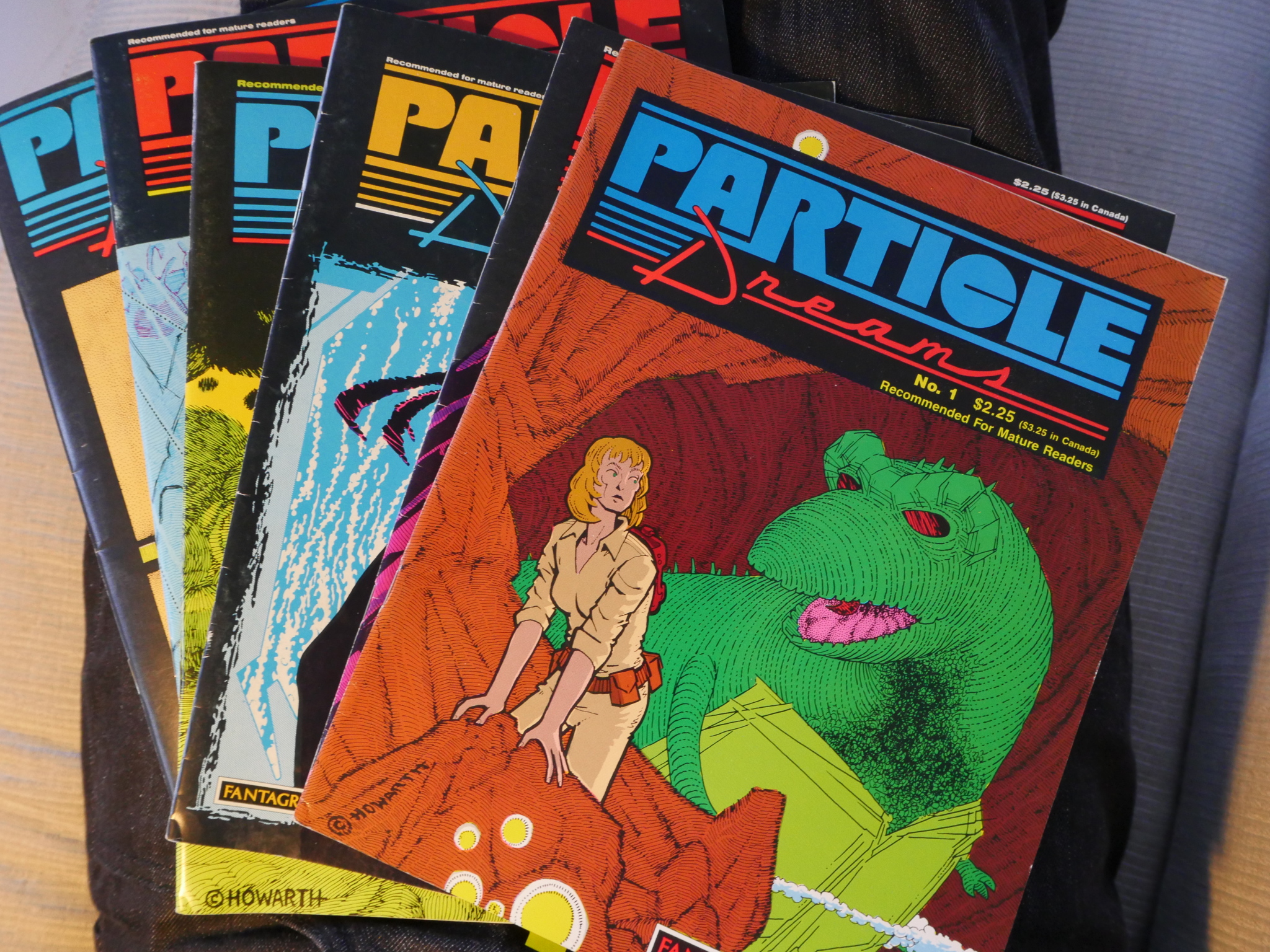 Matt Howarth is best known for his The Annoying Post Bros series. The protagonists there run around different universes killing people and having fun. I never quite warmed up to that concept, although I’ve probably read most of the issues by now.

These comics, on the other hand, center mostly around a government agent, Keif Llama, who goes around various planets fixing problems with the locals. (Or rather, in most of the stories it turns out that the problem is An Evil Corporation, and she fixes the problem on behalf of the locals.)

But there’s a lot to enjoy here. 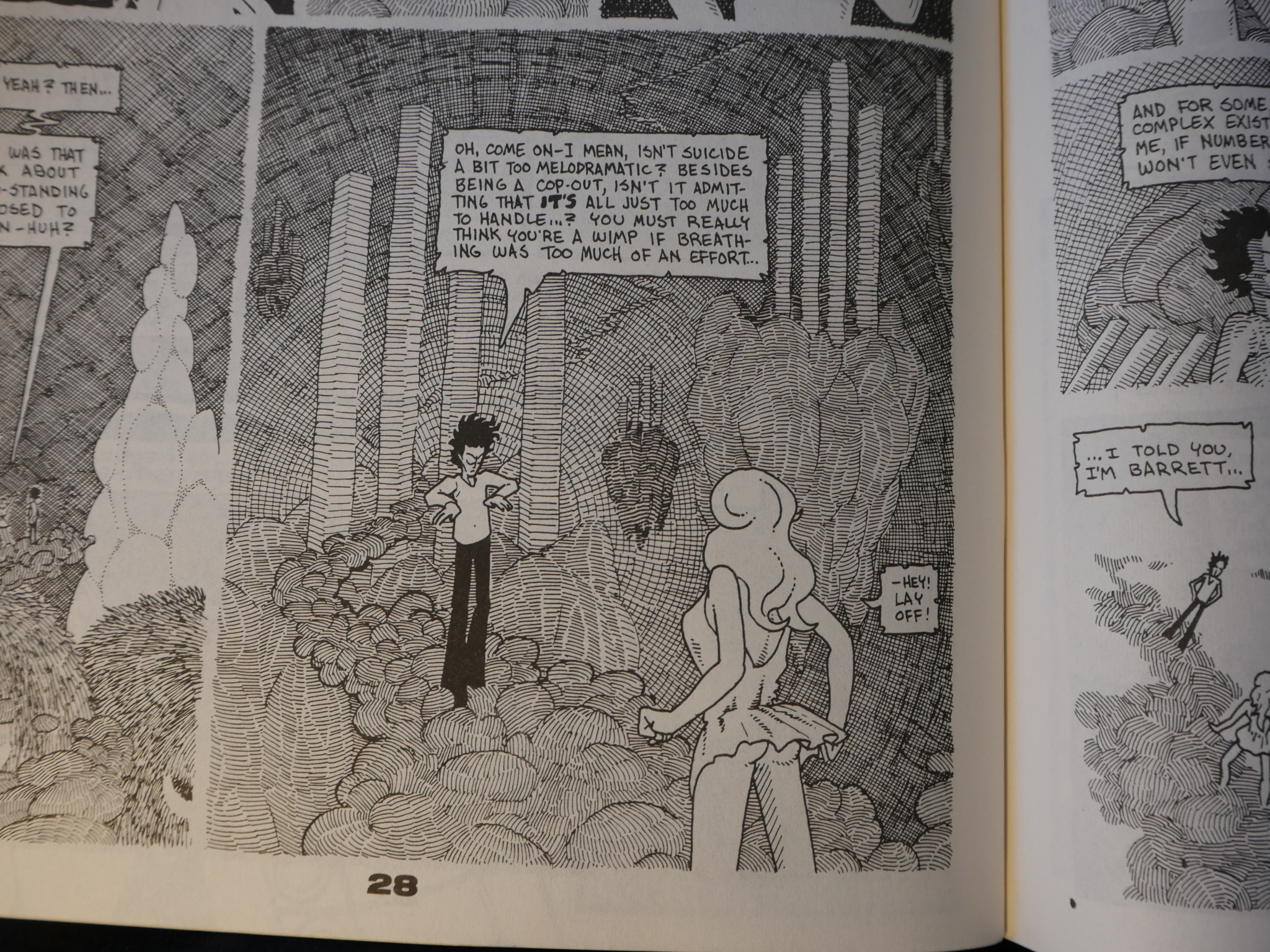 Howarth’s artwork can be uneven, but there’s something about the way he piles up all these textures next to each other that’s really attractive. Cross-hatching every which way… It’s pretty neat.

The fun, non-insulting genre stuff had gone away. But the past few years has seen a revival of sorts — mostly over at Saga Comics. I mean Image Comics, as they probably formally call themselves. (Prophet, Saga, Descender, Saga, Southern Cross, Saga, Saga.) But it’s all a bit more soap opera like and a bit more serious than this: 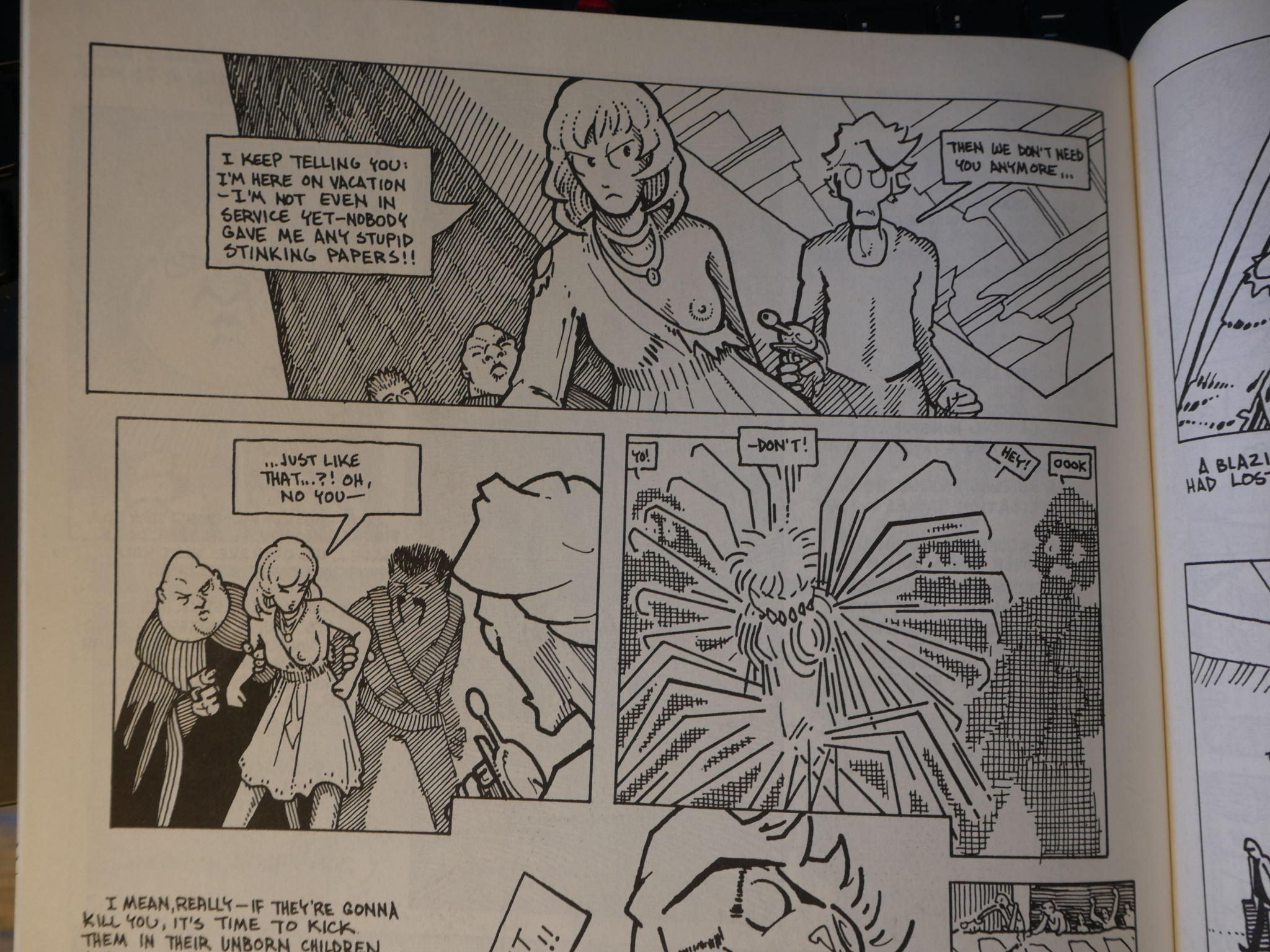 Fight scene! That’s the way to do it. 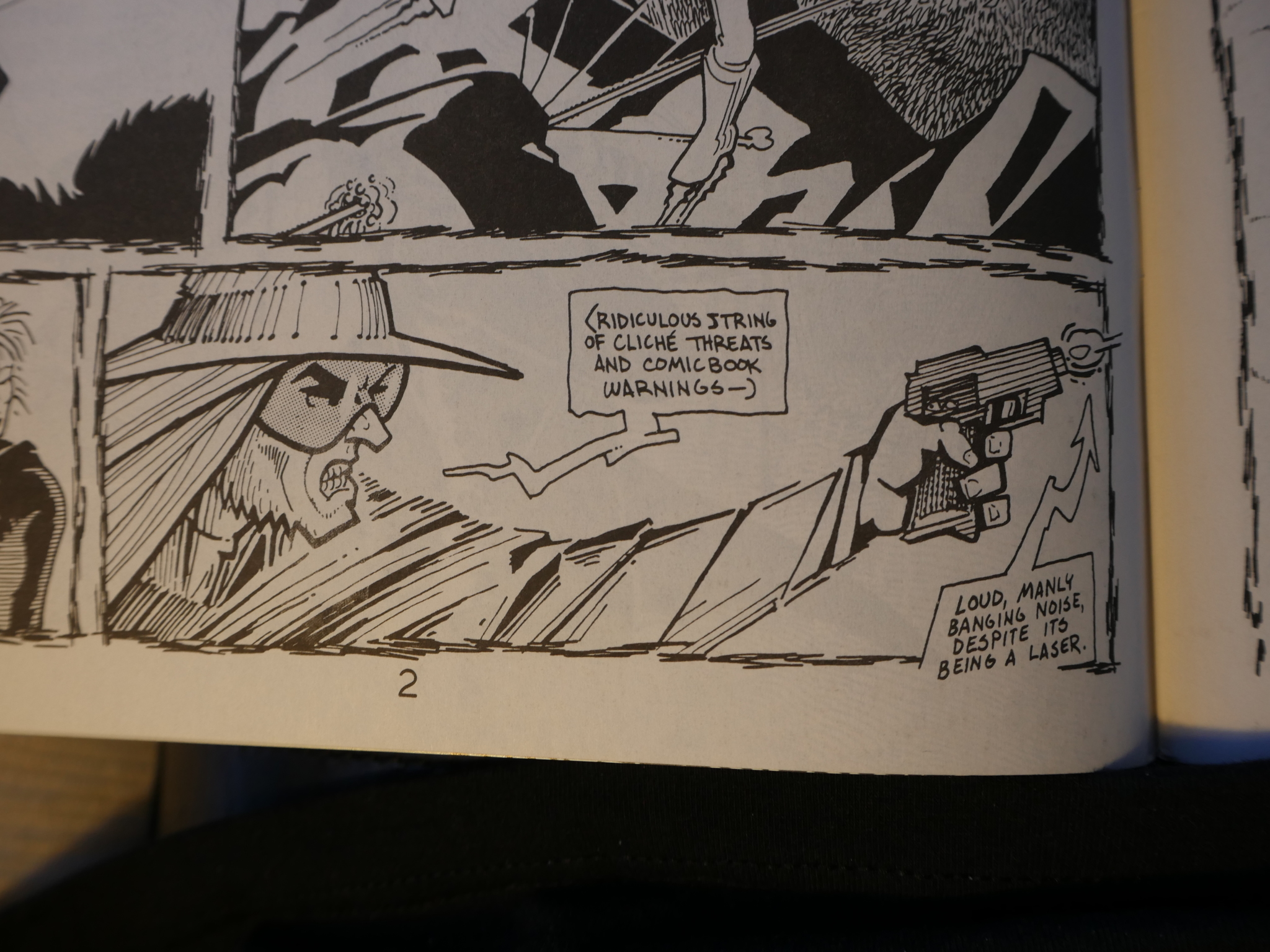 I’m quite taken with his way of (sometimes) just describing what the words would have been. And last but not least: All the aliens. The aliens are really great. 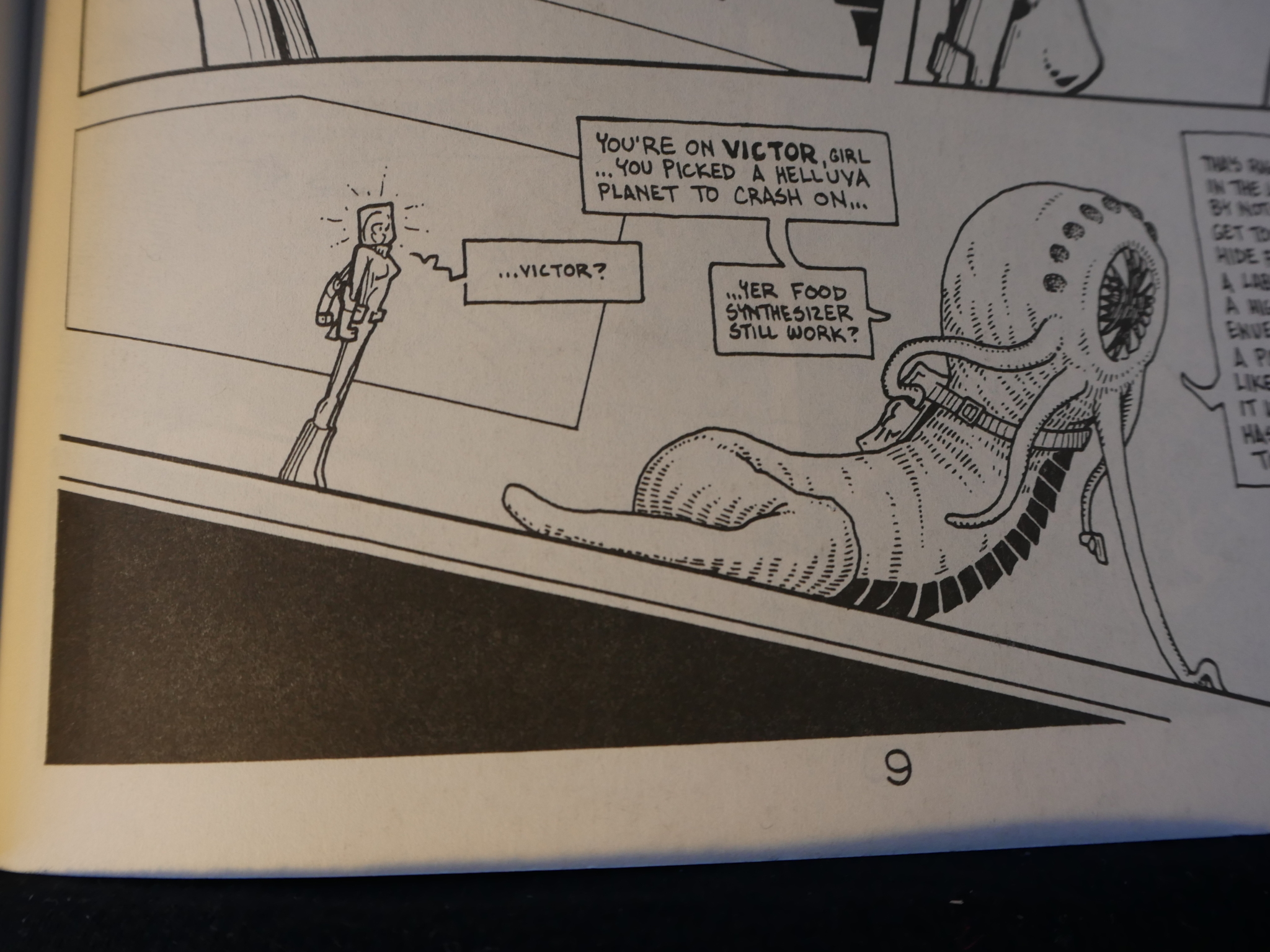 How can you not love these stampeding aliens? 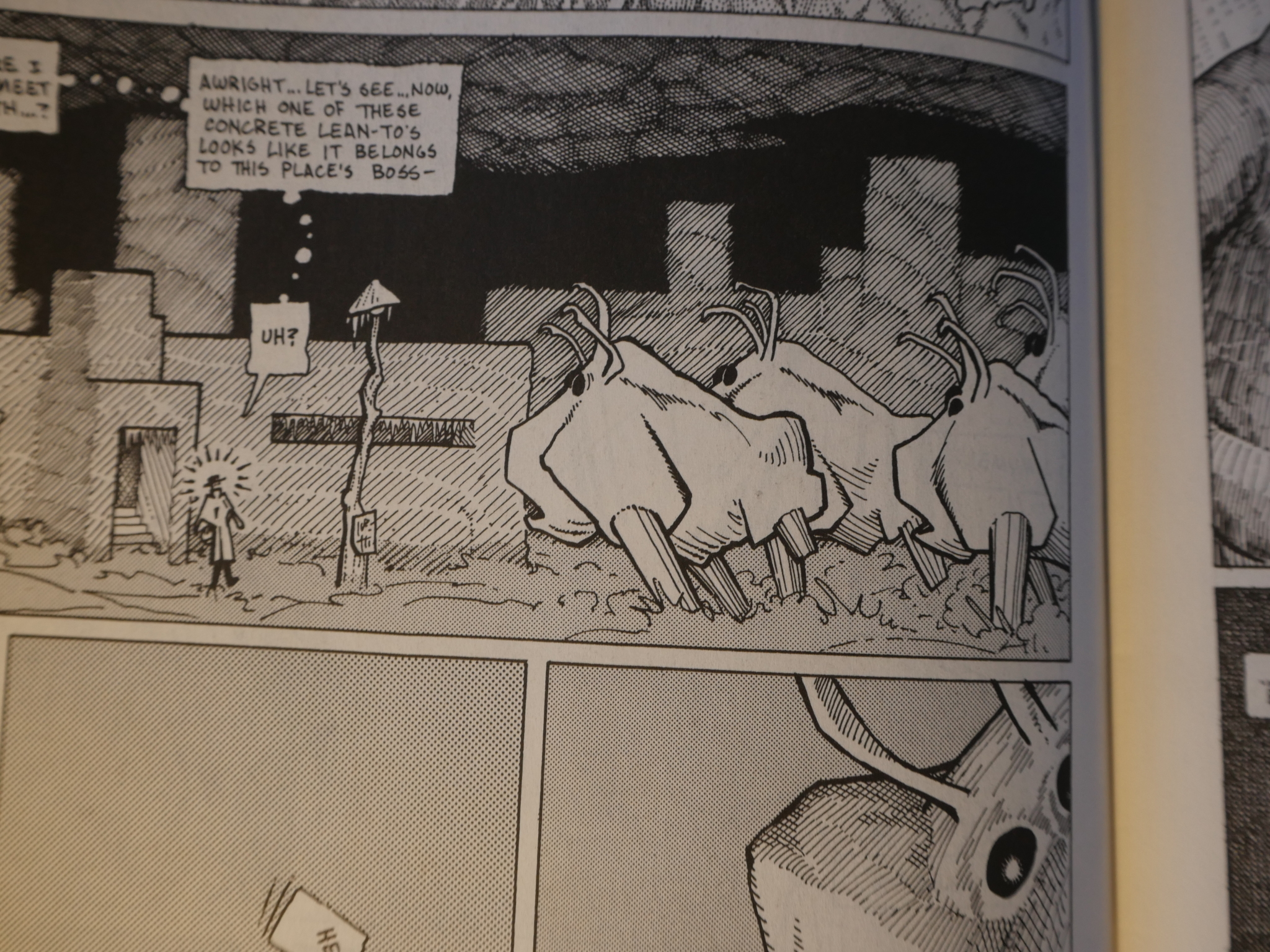 And from the moebius strip strip, where everybody’s waiting in an infinite line: 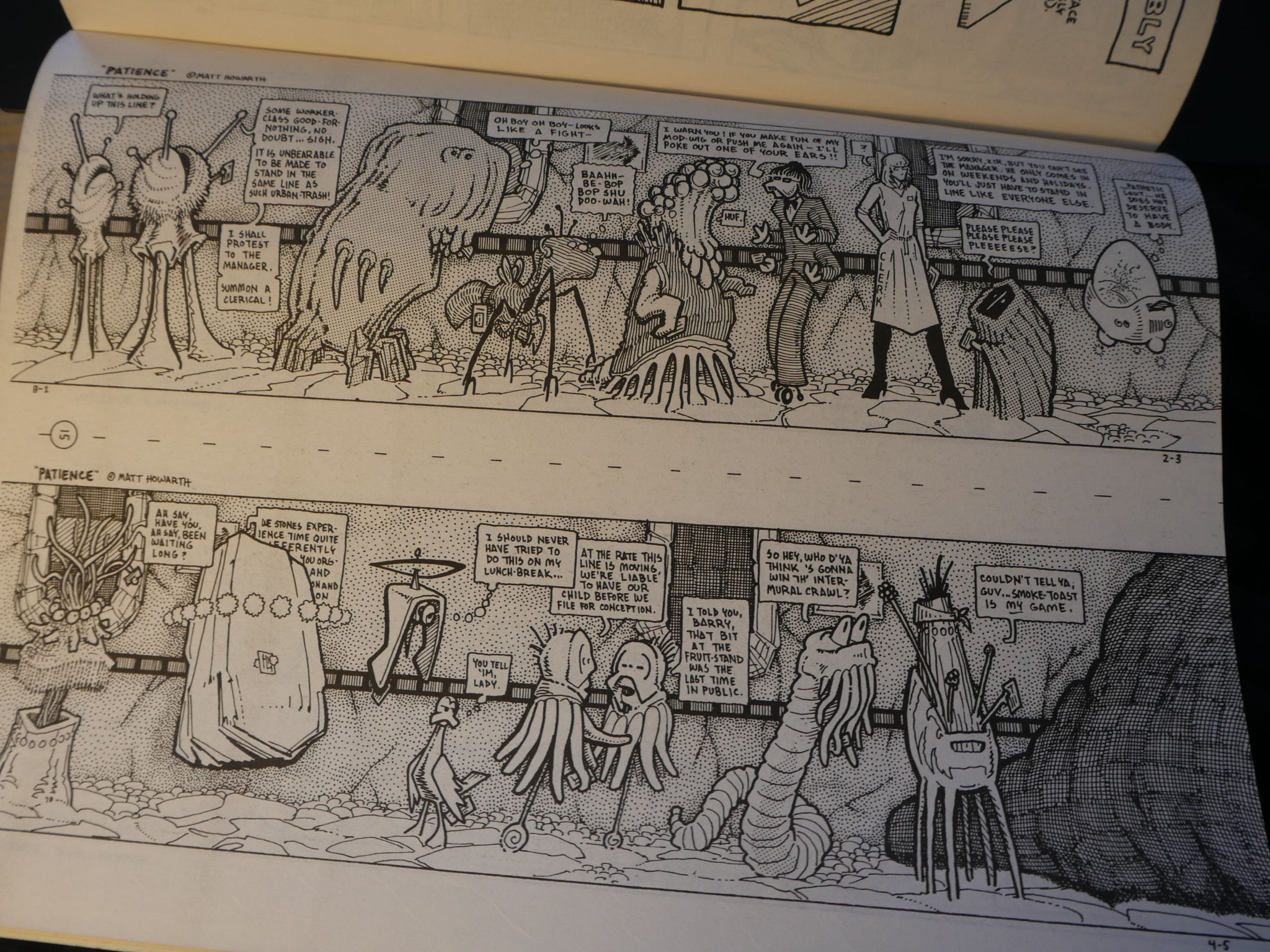 However, the stories are problematic. More than a few of them end with a sense of “Huh? That’s the end? Did I miss something?” And most of them feature a genocide of some sort or another. After a while, it starts grating on you, just like it does in the more thoroughly violent Post Bros book. 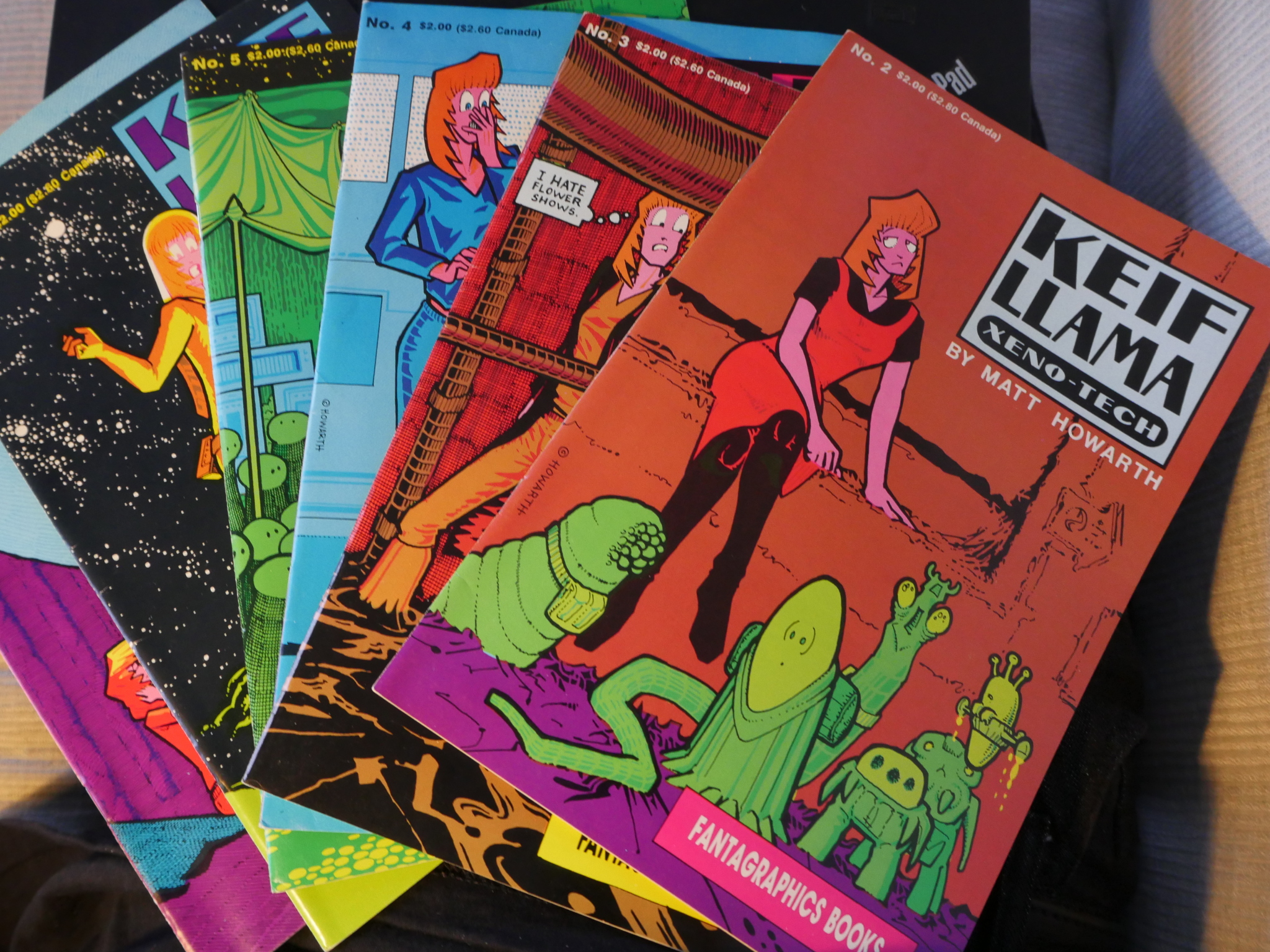 After six magazine-sized issues, the title changed, and the format was reduced, and refocused entirely on Keif Llama. (The name is apparently a pun on “Keith Laumer”, who also wrote sci-fi short stories about bureaucrats who travels around various planets fixing problems.) 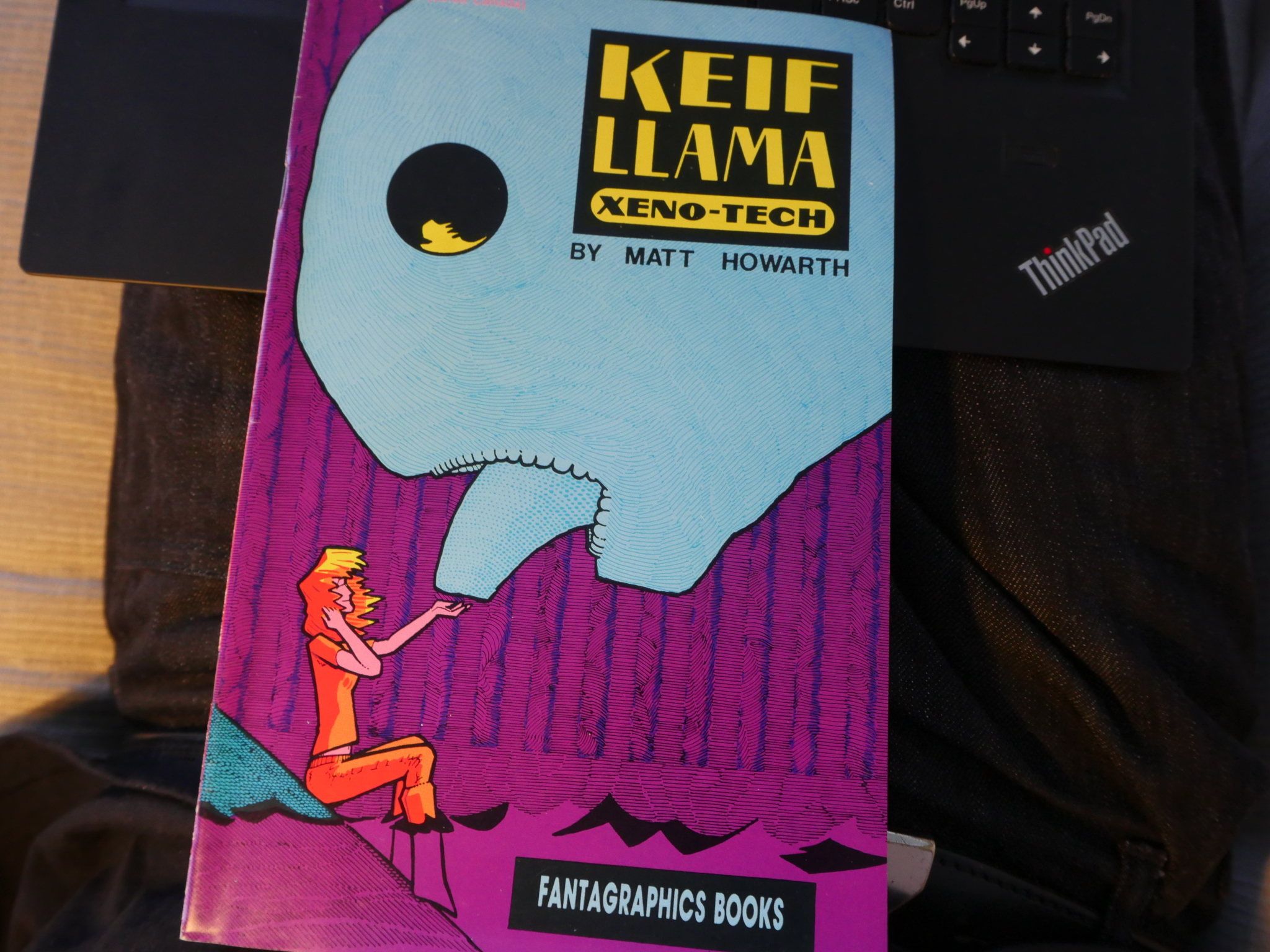 Instead of first colouring, and then separating the colours before printing, he consistently does the colouring directly on separate layers. This means that he’s really drawing each cover four times over, once in each colour. (I mean, he’s really drawing in black and white and imagining how it’ll all look when it’s printed in the four colour press.) It’s a pretty unique look.

Like I said earlier, the artwork is frustratingly uneven. Some pages are great, an on other pages he just drops the backgrounds: 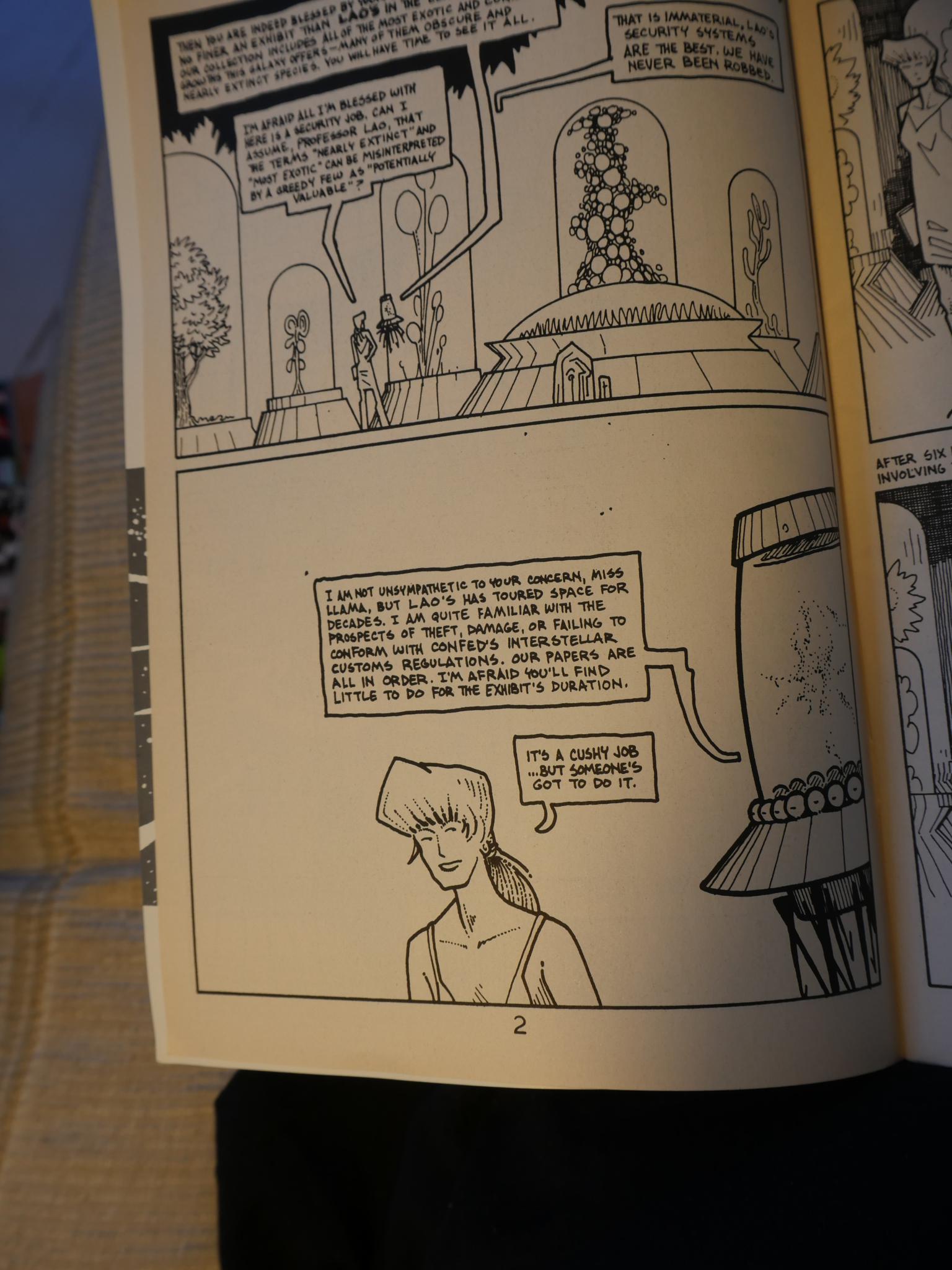 And the plots… Oh, dear. Here’s a pretty bad one: 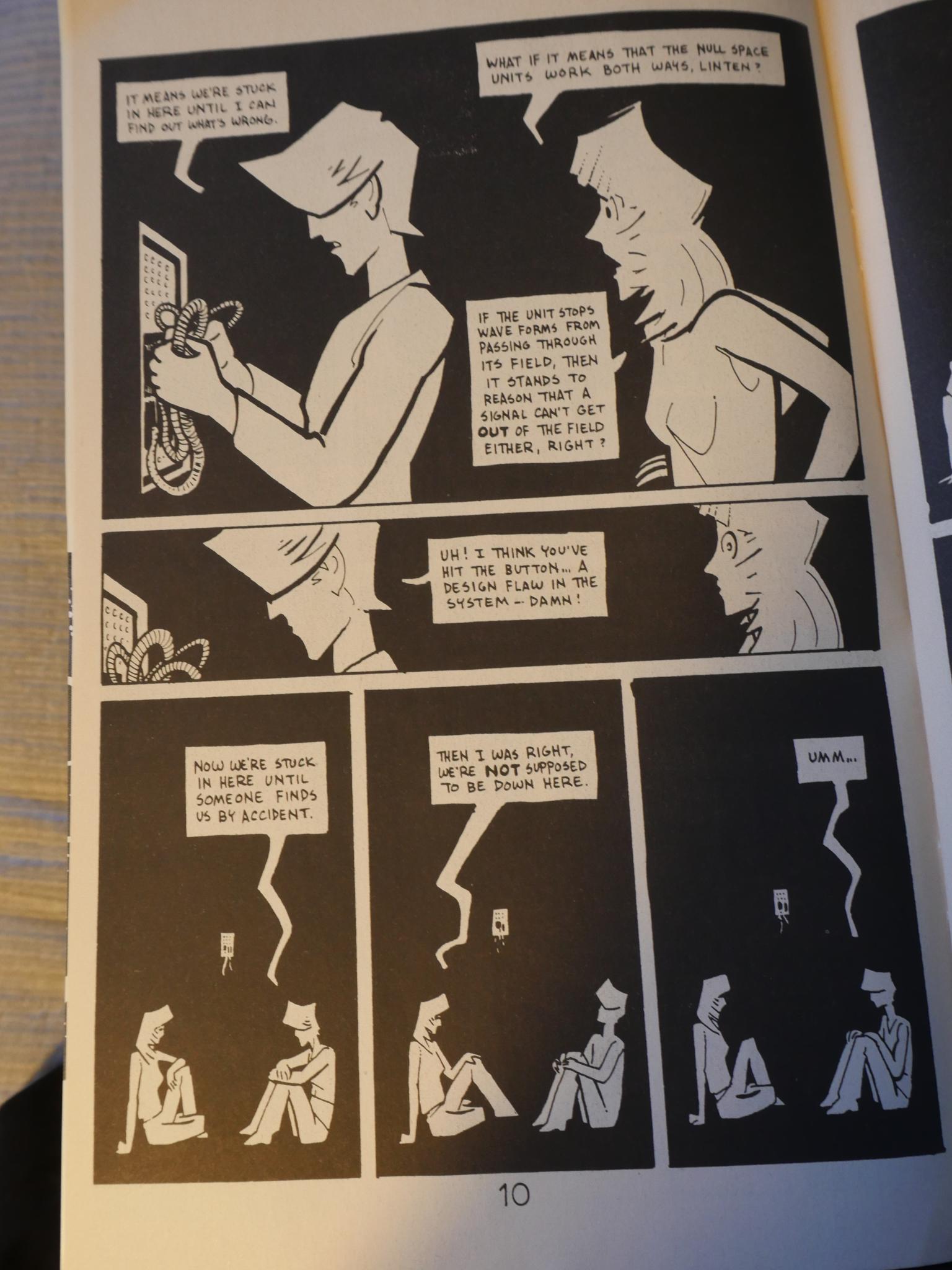 They go into a null field (used to shield the craft from radiation) to enjoy the darkness, and then it turns out that the button to open the door doesn’t work, because it’s a null field and nothing much can exit or enter the field. The engineers who built it didn’t think of that.

Matt Howarths is still publishing comics, but mostly self-publishing in digital form. I have not read any of the digital publications, but looking at the catalogue, I see several things that look attractive. And I’ve got a tablet to read them on, so I think I’ll give them a whirl.

[Edit: I just did, and it’s a kinda wonky interface.  These are DRM-free PDFs, which is good, but the one I bought is formatted as five-page PDFs inside a ZIP file.  And they can’t be concatenated, because they’re “encrypted”.  I can read them fine on the laptop, but I don’t want to be futzing around on the tablet with all these small files…  Disappointing.]

He does make enjoyable comics, even if they are a bit annoying at times.