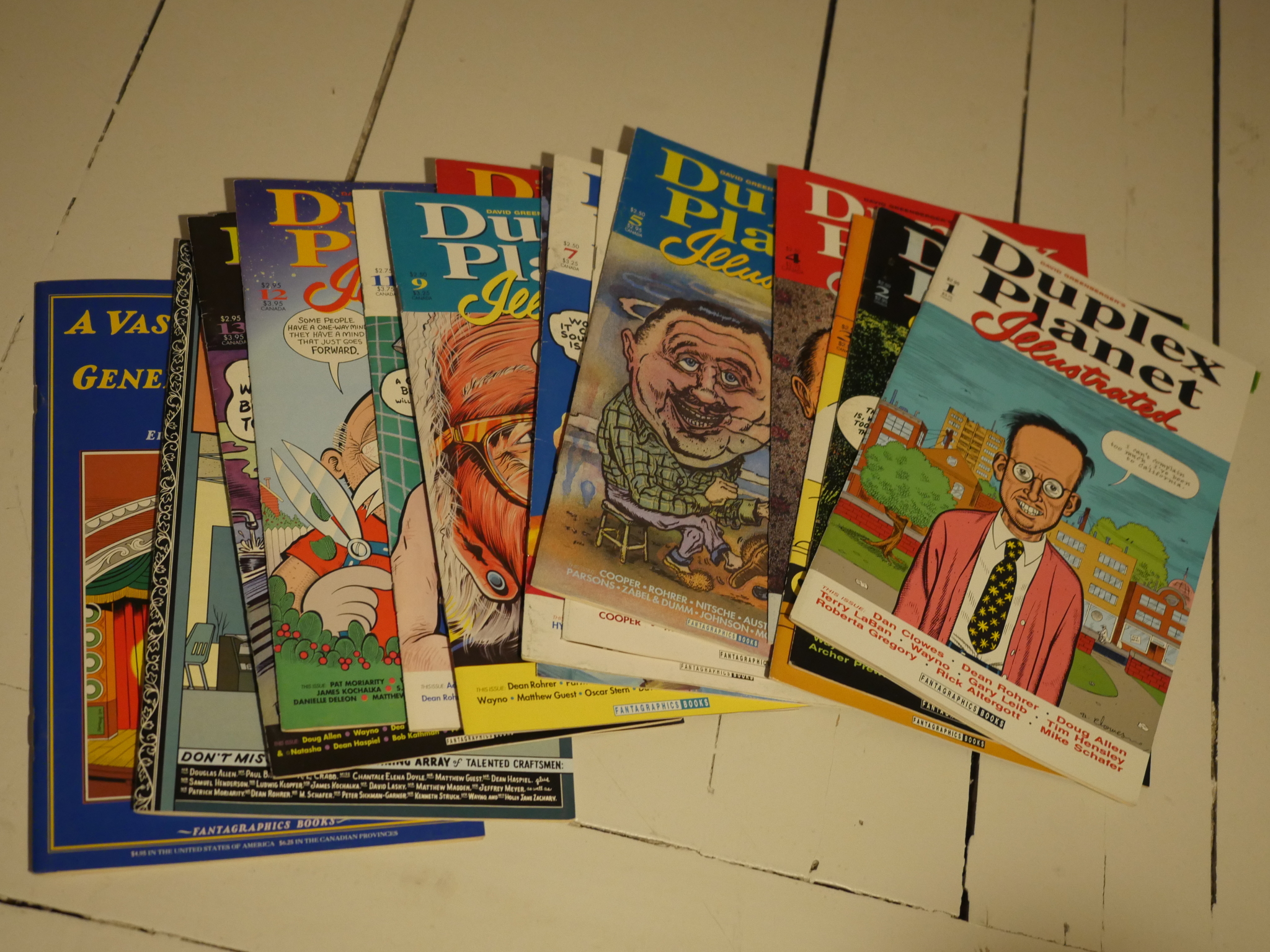 This is one of those early-90s Fantagraphics comics that I don’t recall all that well, other than I liked it fine at the time. I wasn’t really very enthusiastic about re-reading it, so I wondered whether I had suppressed some deep, dark feelings about it… 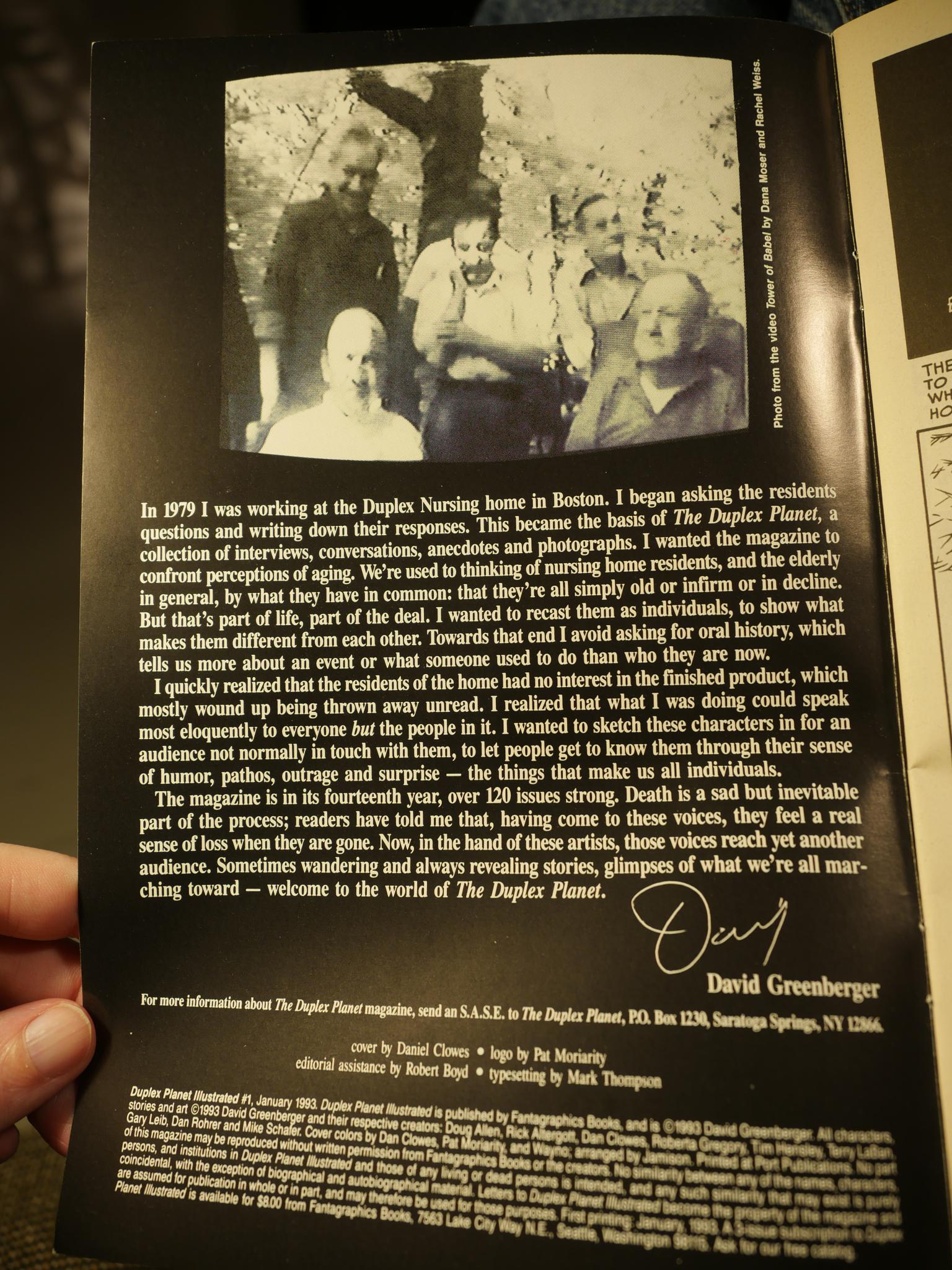 Greenberger works at a nursing home and collects stories from the residents, and prints them in a long running fanzine (over 100 issues). Daniel Clowes had previously adapted a few for his Eightball series, but now it was time for a more concerted effort at making these stories known through comics adaptation. 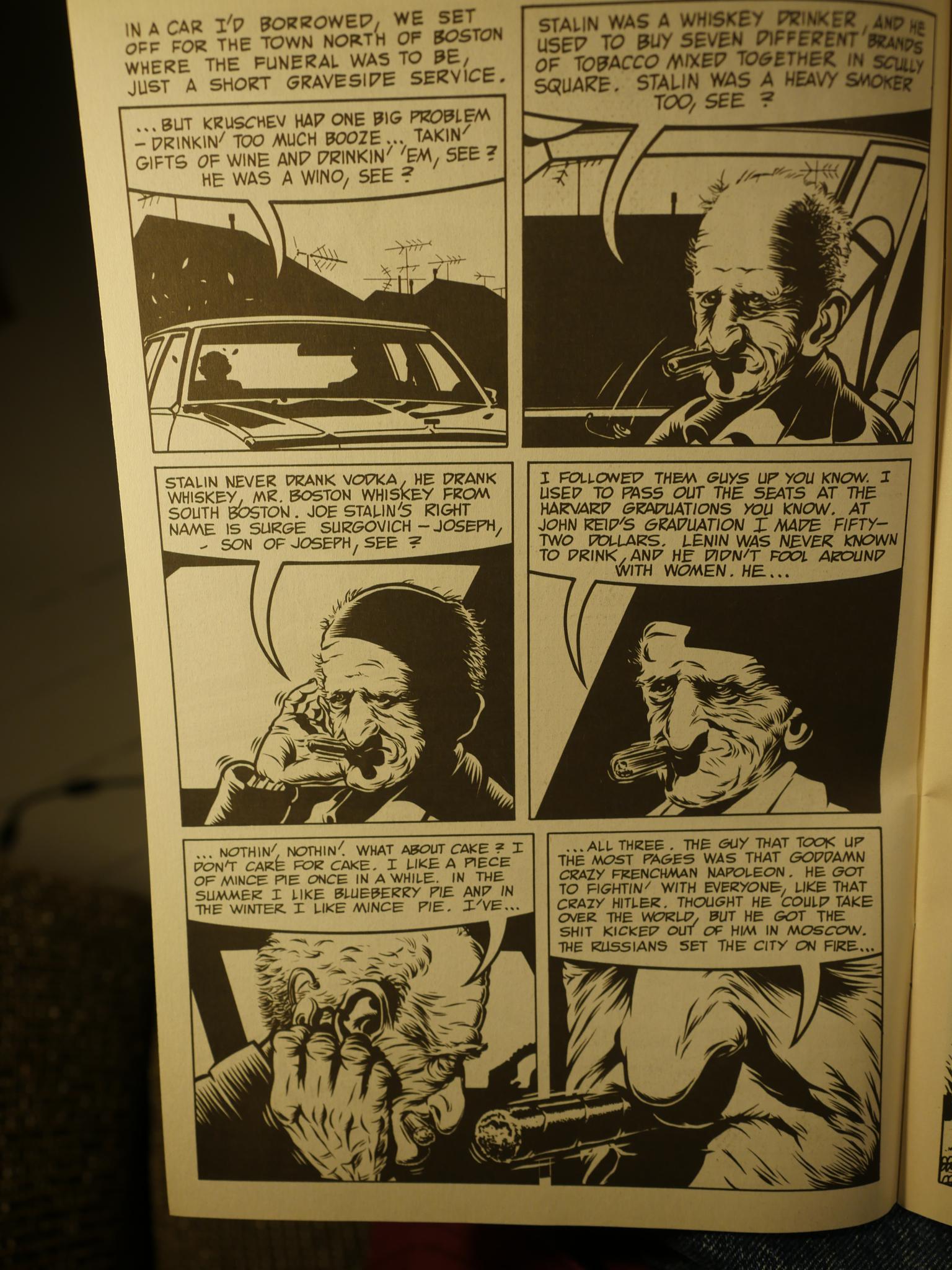 There are basically two modes to these pieces. In the first, we’re presented with a rambling series of remembrances. Well, senile ramblings, really.  I mean that technically.  These ramblings are either illustrated realistically: Just showing the guy who’s rambling on, like here. 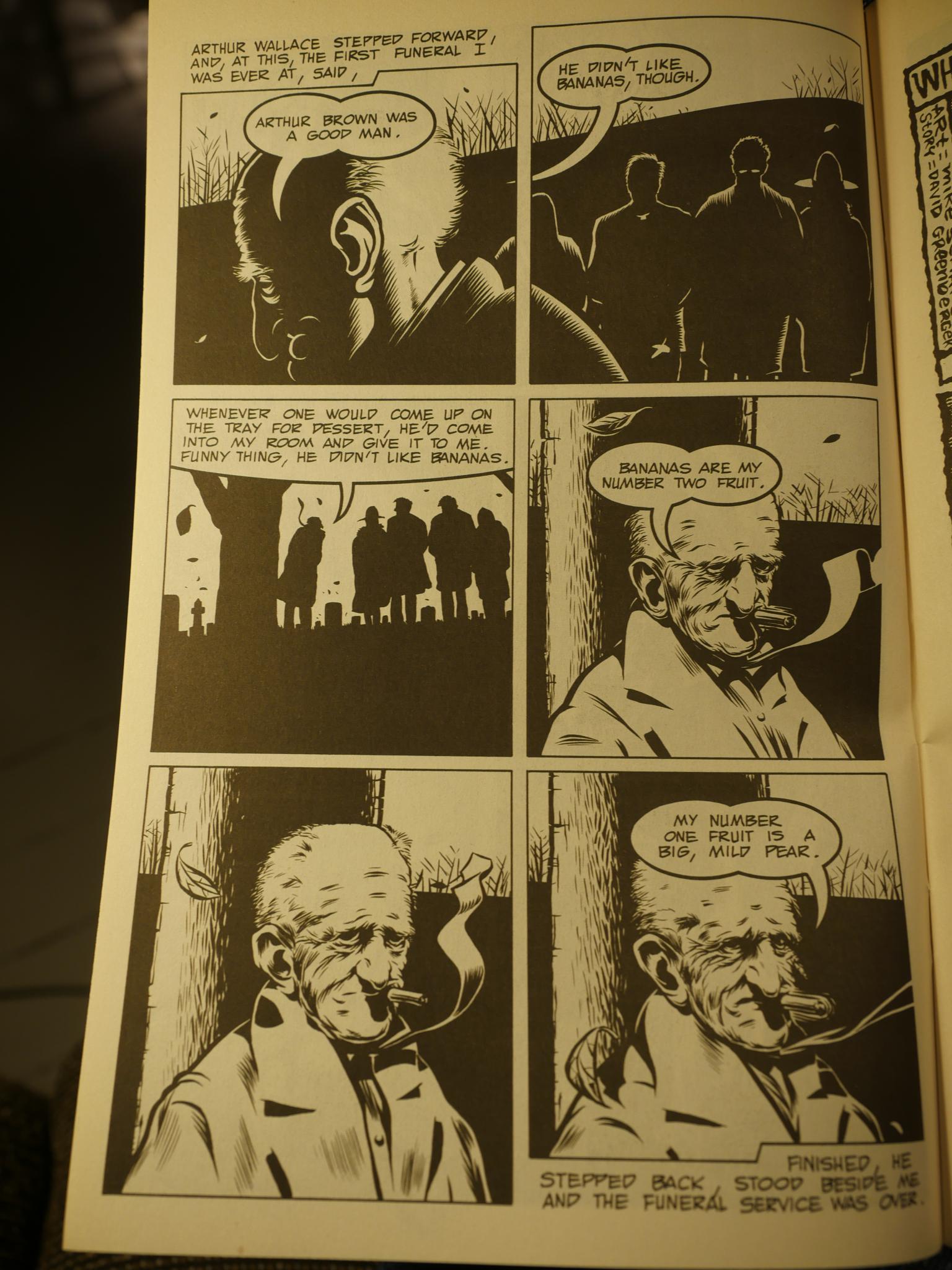 But there’s often a punch line at the end where the old person in question says something particularly odd. (Artwork by Dean Rohrer.) 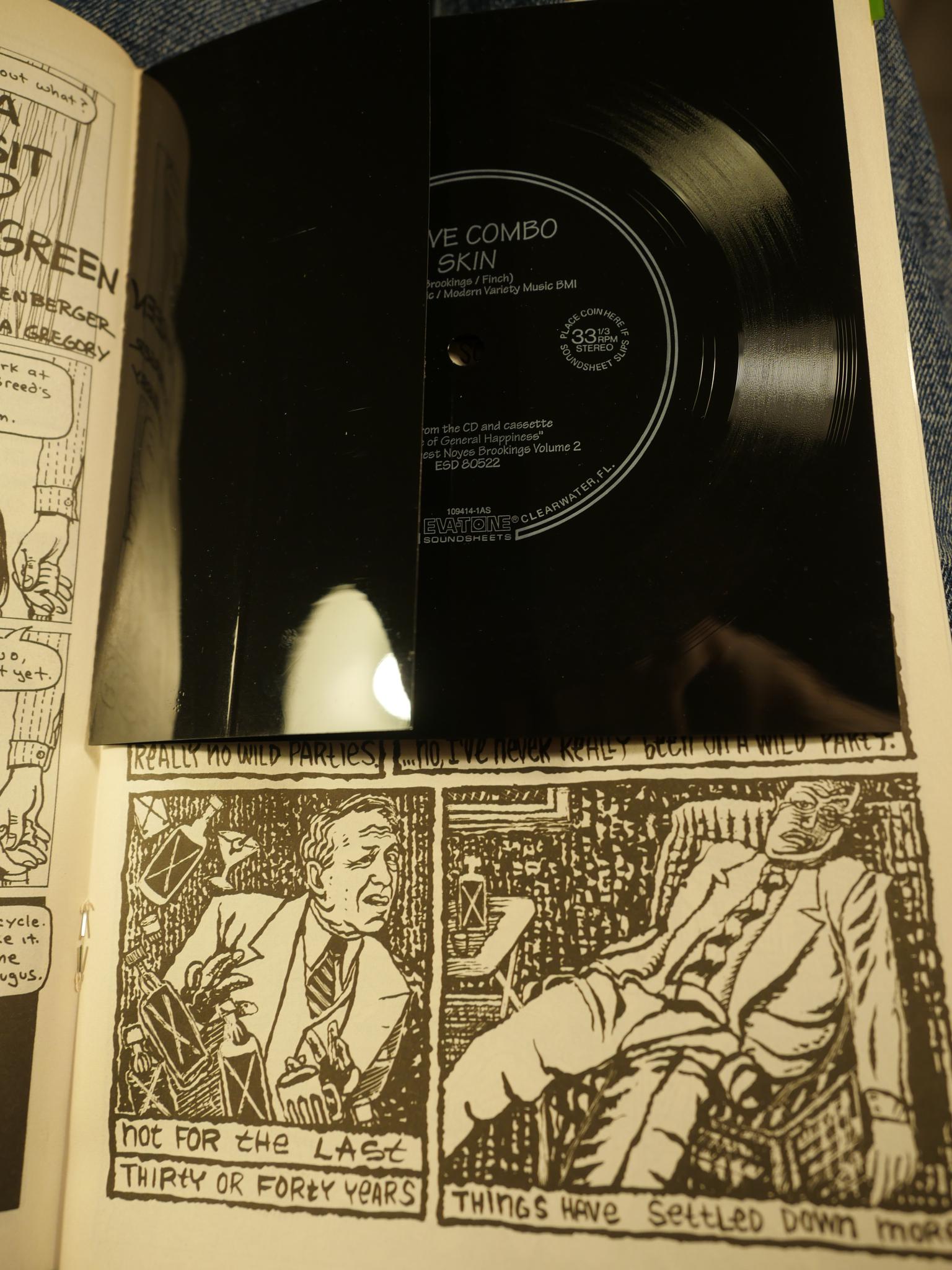 A series of CDs had also been created based on poems written by one of the residents, and a couple of them are included on this flexi in the first issue that I apparently was never curious enough about to listen to, which is rather unusual for me… 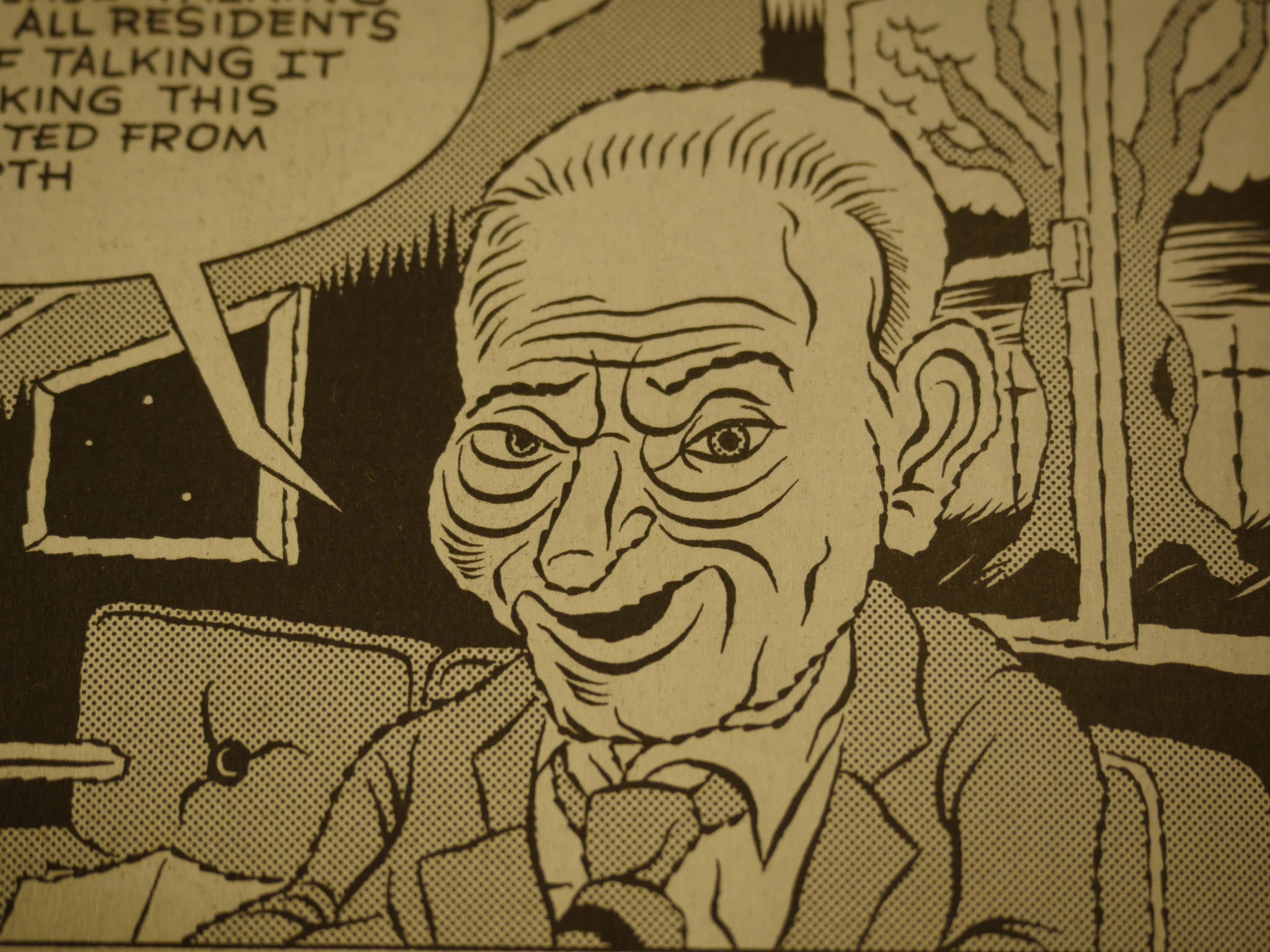 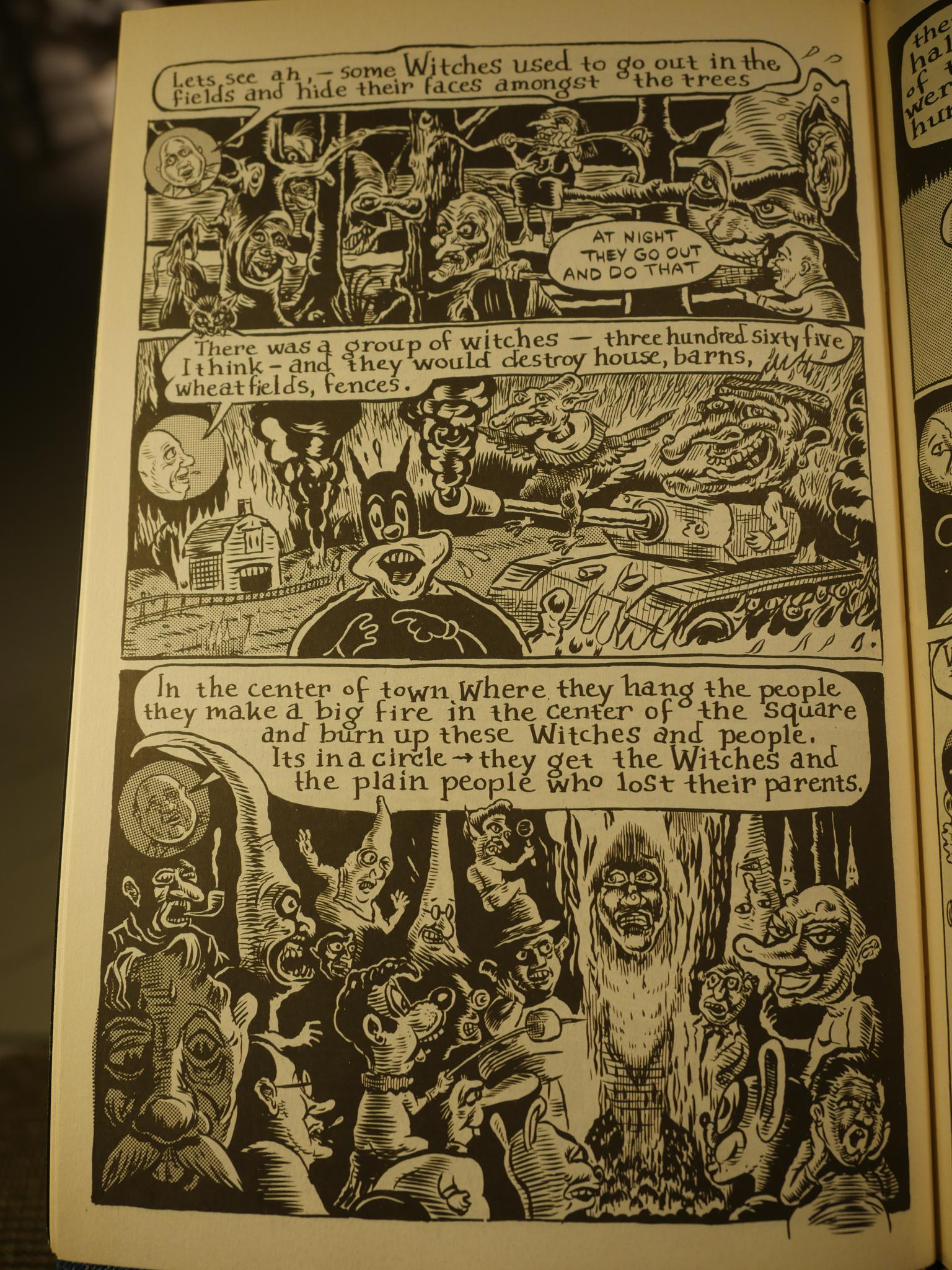 The other approach to illustrating the ramblings is to show what the person is saying in a more literal fashion. Since these older people have a shaky grasp on reality sometimes, especially when talking about what they remember, that can result in rather wild and amusing narratives. 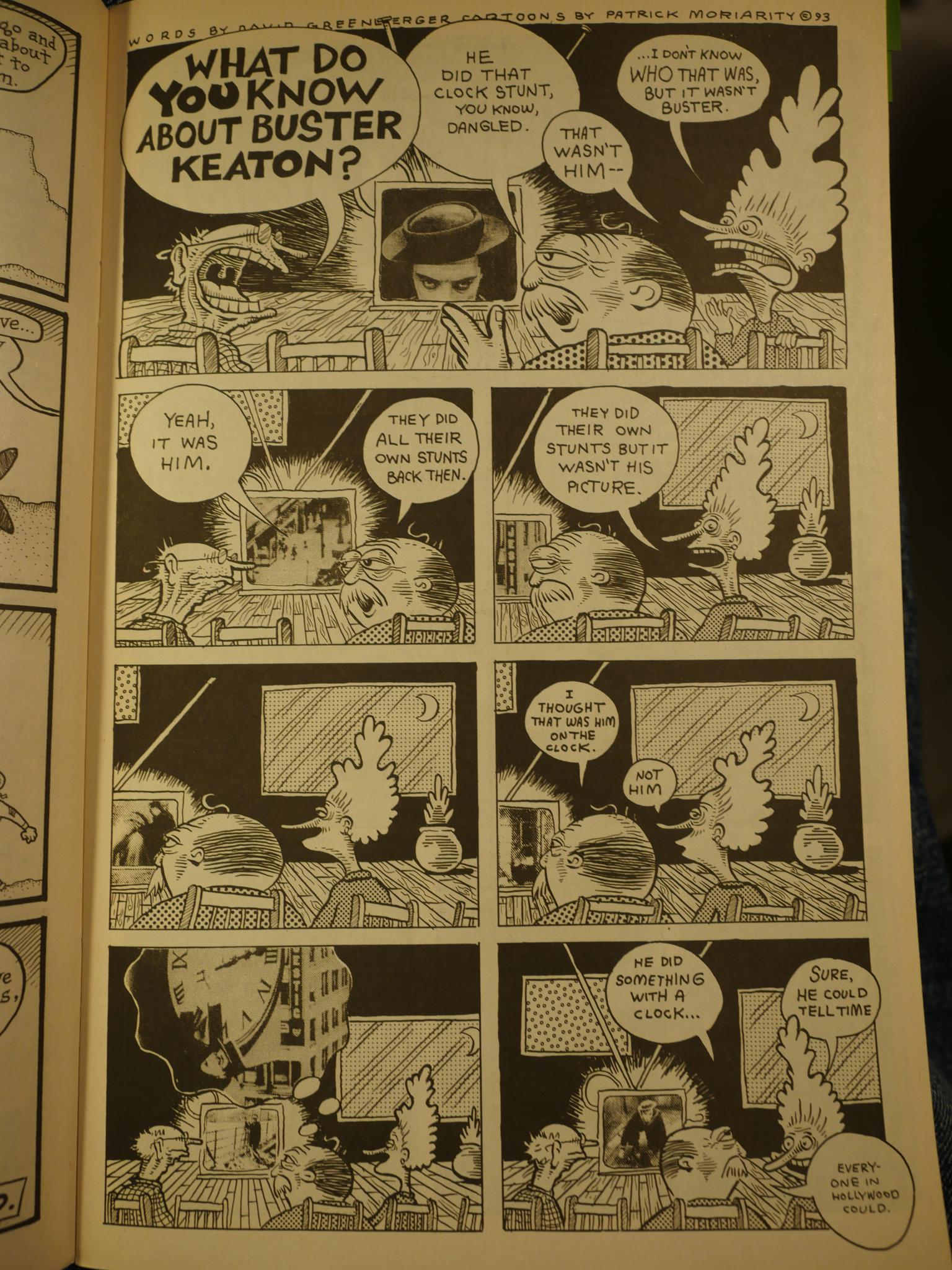 In addition to the remembrances, the other major mode used in the book  Greenberger asking the residents some question or other, and then taking note of what they answer. It frequently tips over into the “Old People Say The Darndest Things” category, but the more lucid residents (like this one illustrated by Pat Moriarty) are sometimes rather funny. 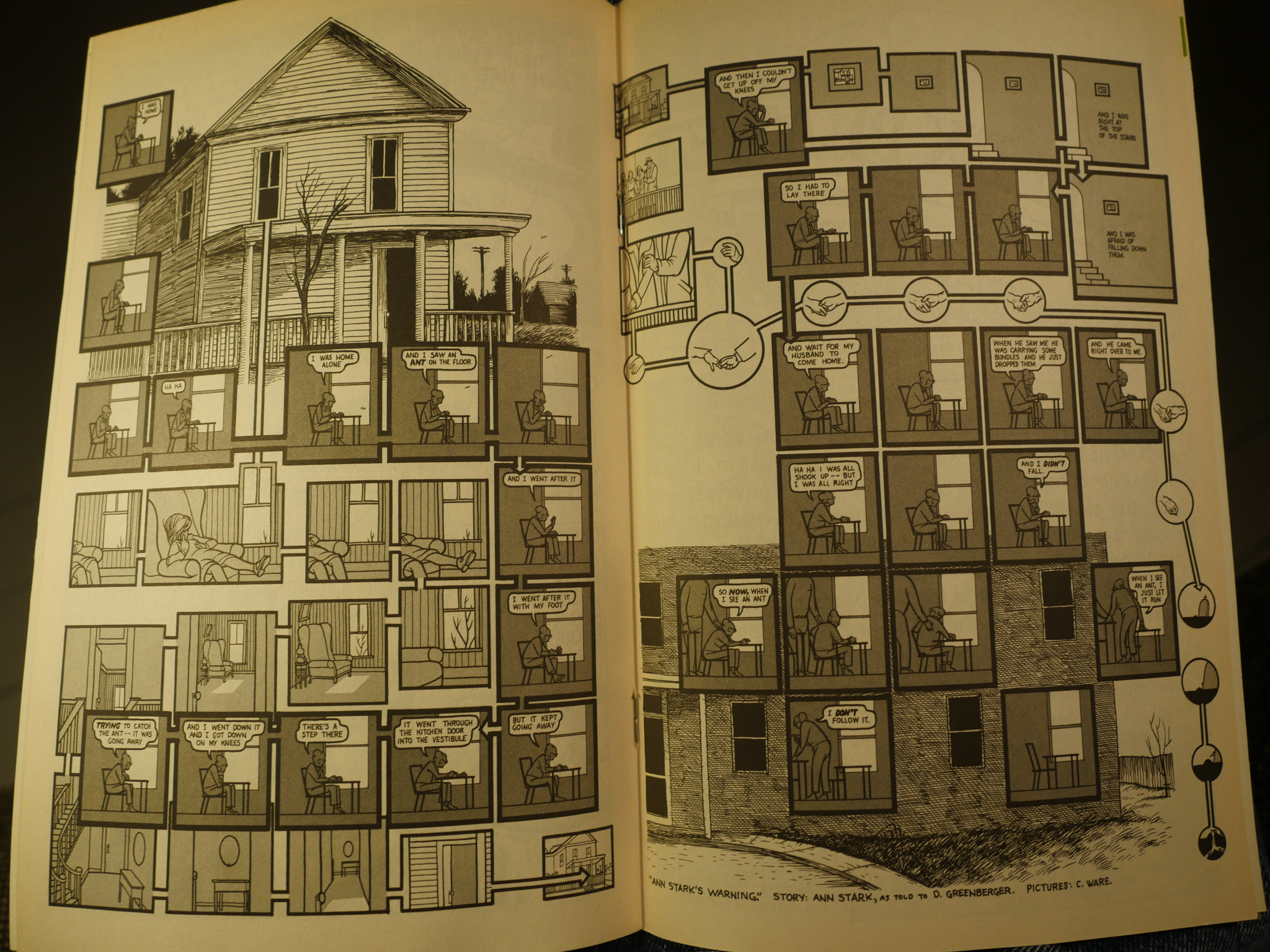 Ooo! A two-pager illustrated by Chris Ware. Ware often works with memory in his work, so having him illustrate one of these anecdotes is just perfect. Probably the best piece in the Duplex run. 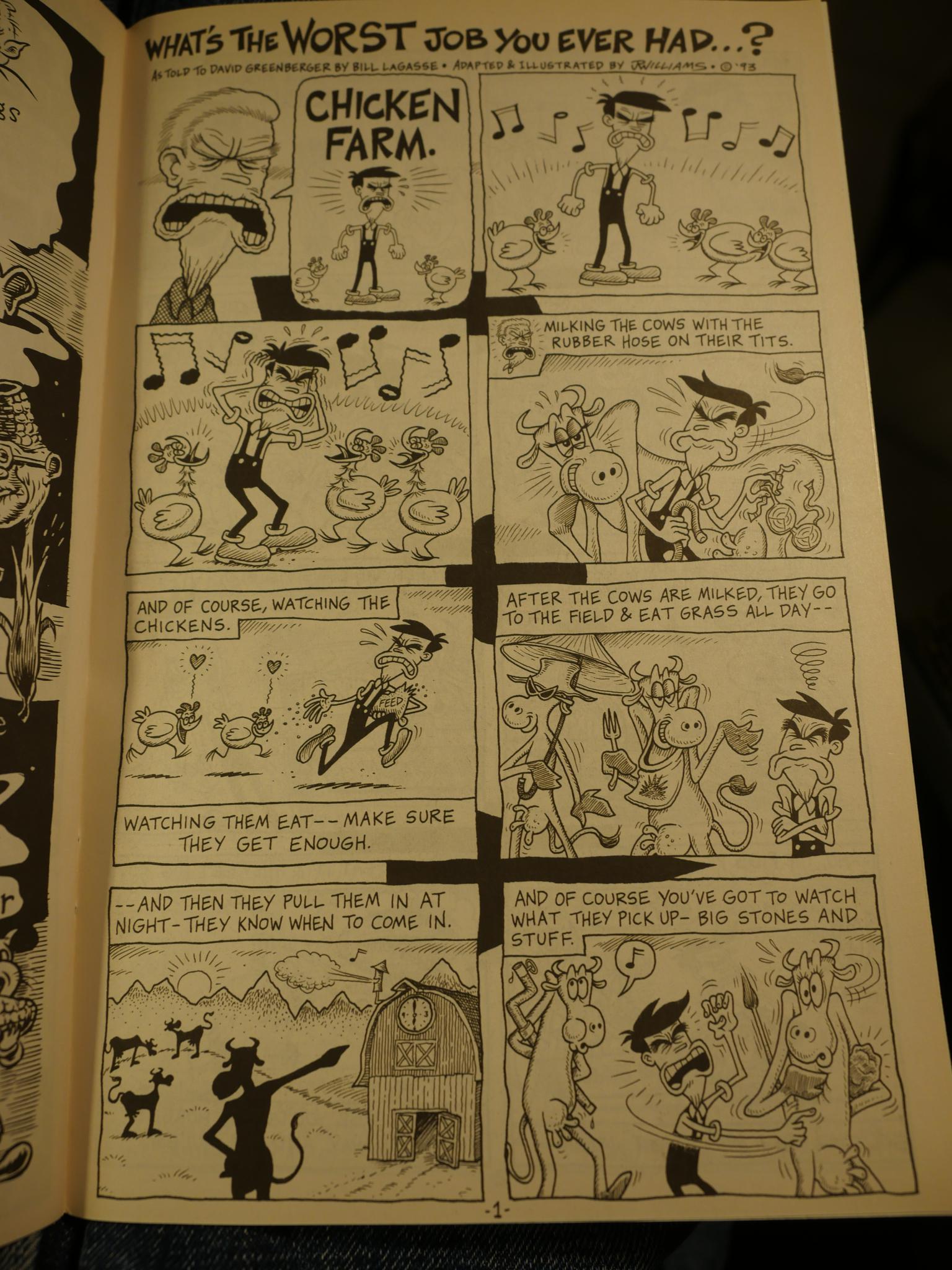 The funniest one is this one illustrated by JR Williams, though. It goes on for several more glorious pages. 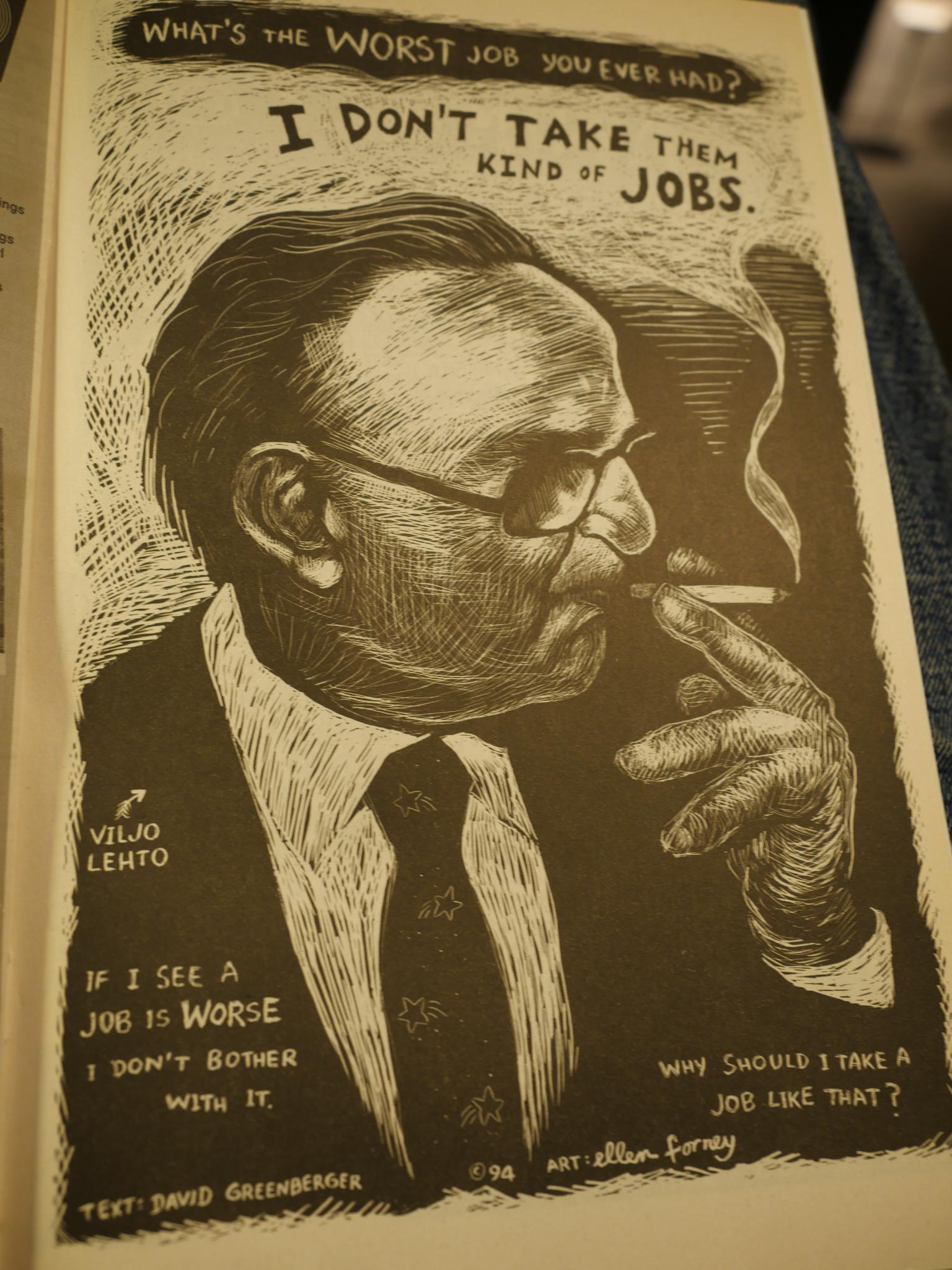 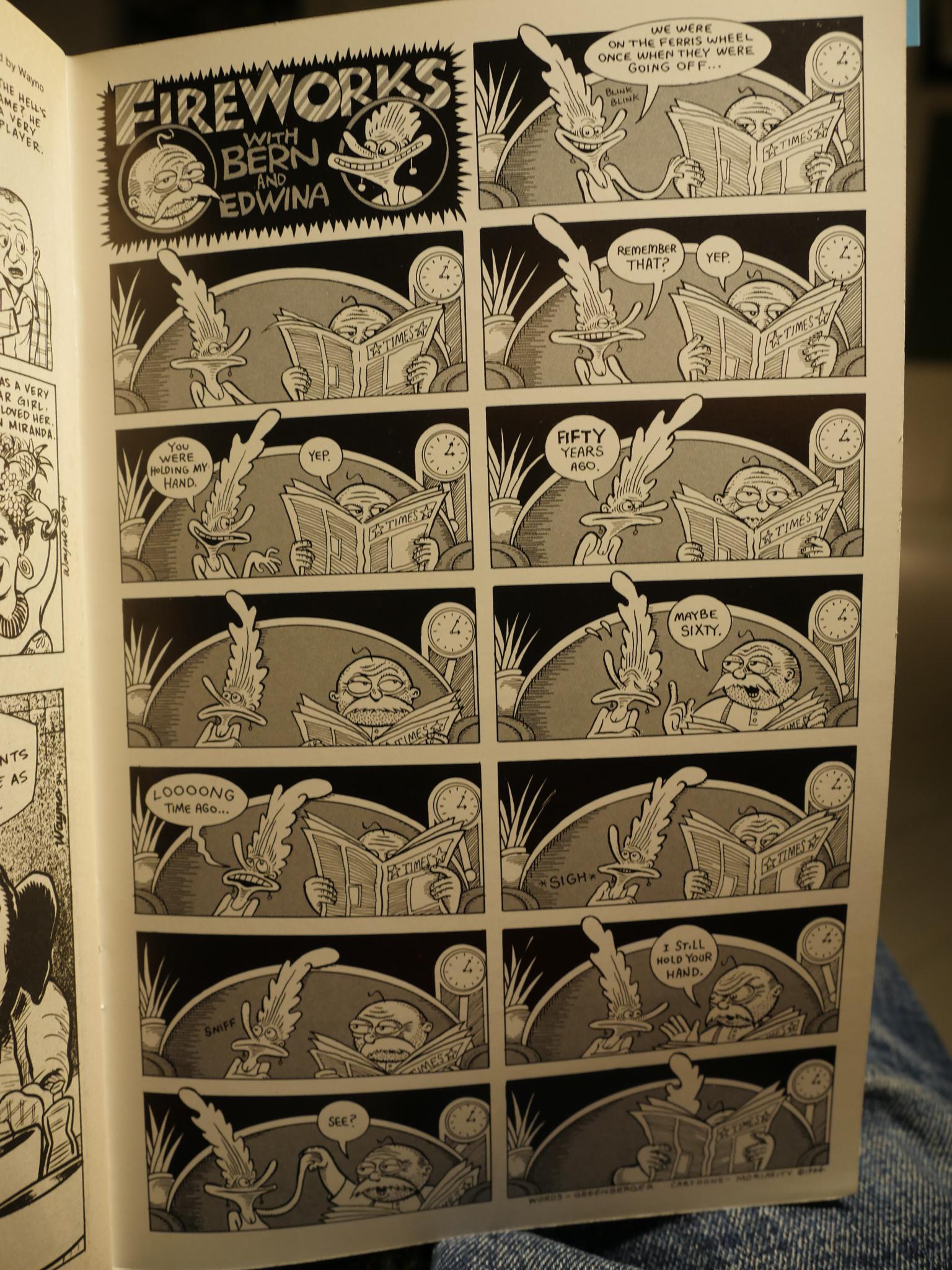 Many of the characters in this series are recurring, and the Bern and Edwina stories (all illustrated by Pat Moriarty) are the cutest ones. (And also the ones with the most traditional narrative structures.) They were later collected in a trade paperback, I think. 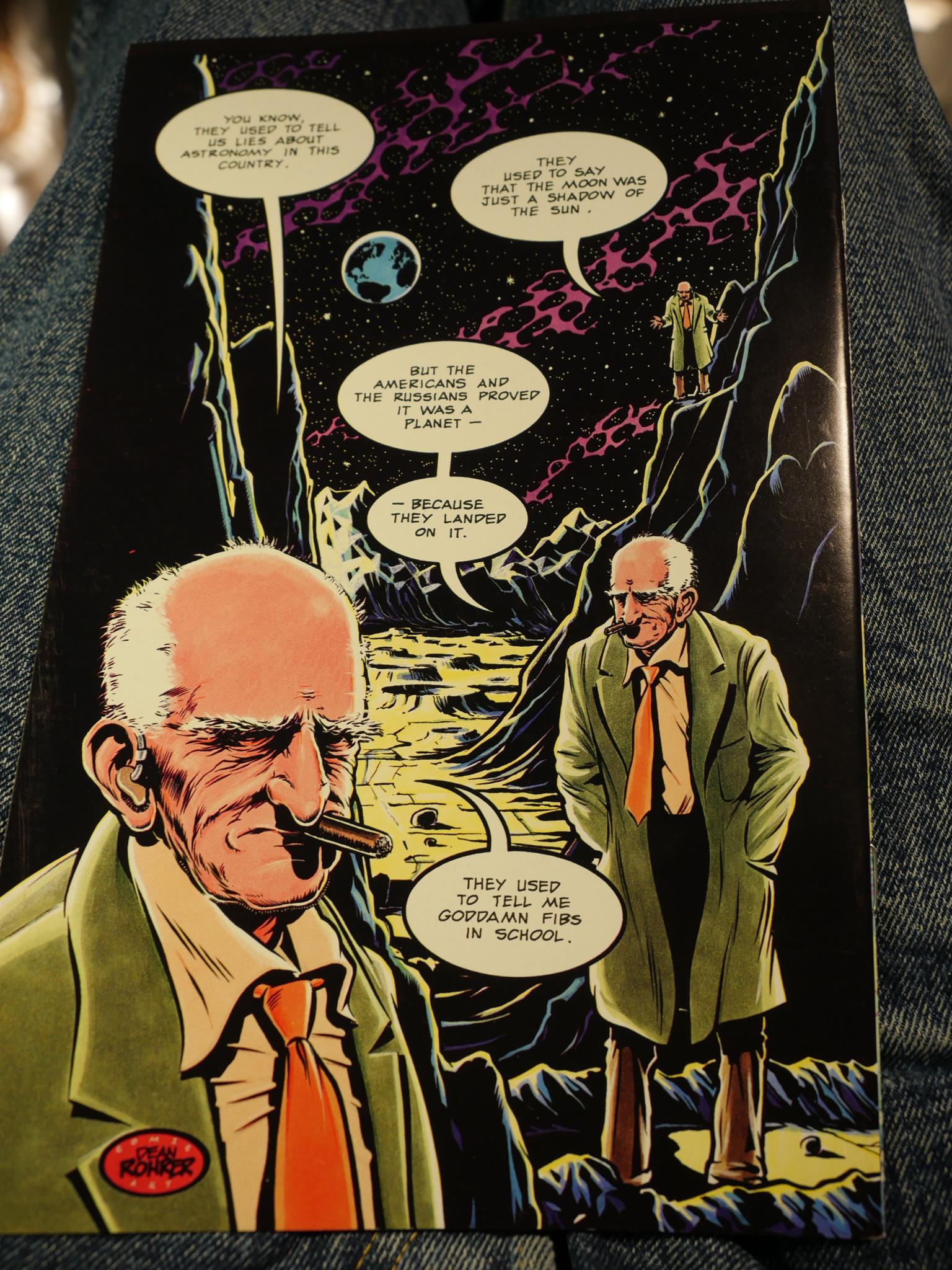 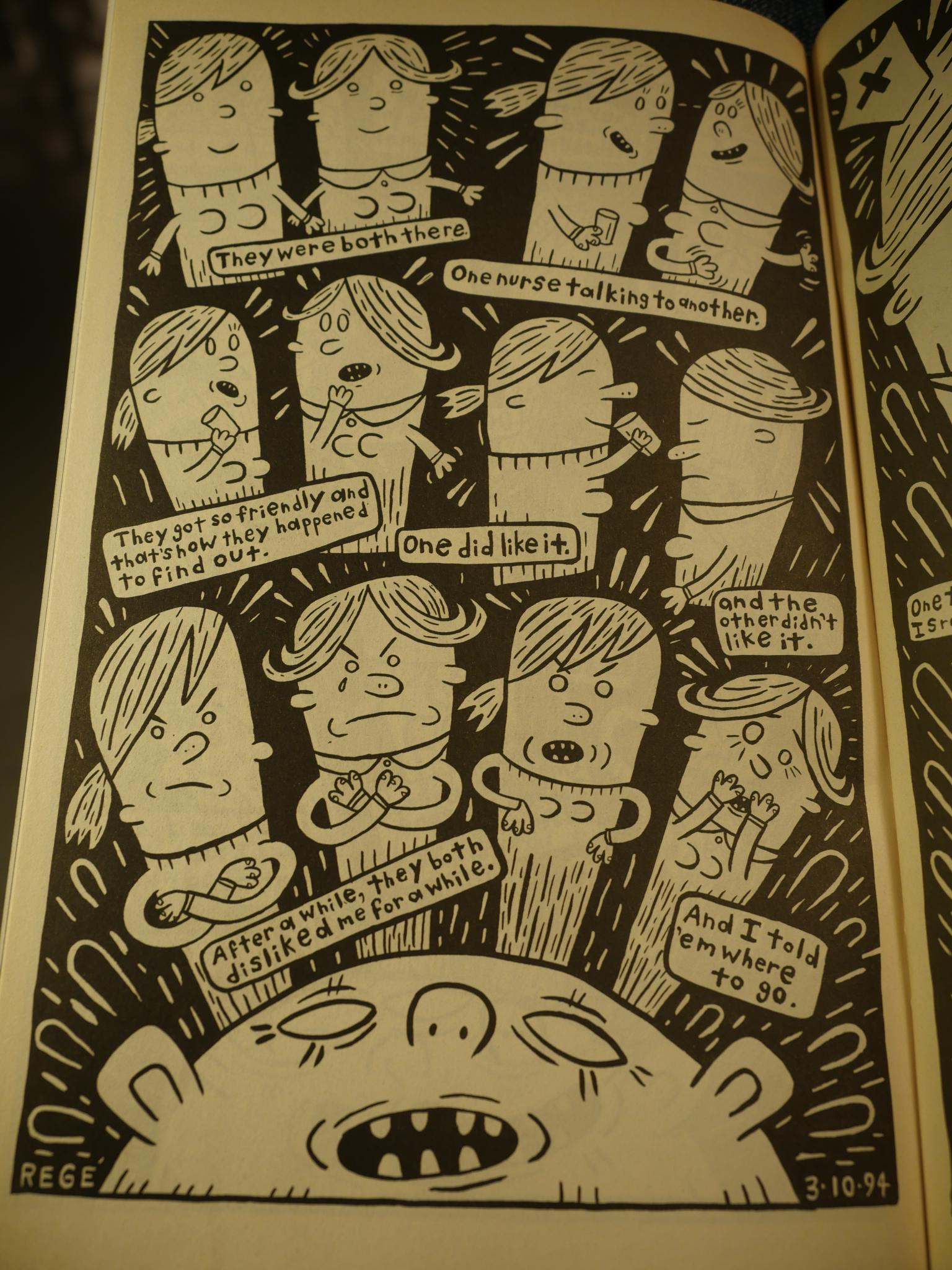 Most of the stories aren’t very dense: Just a paragraph of rambling expanded to a handful of pages. This makes the comic book a rather breezy reading experience, which is nice. Here’s an early Ron Regé page, somewhat different from his later style. 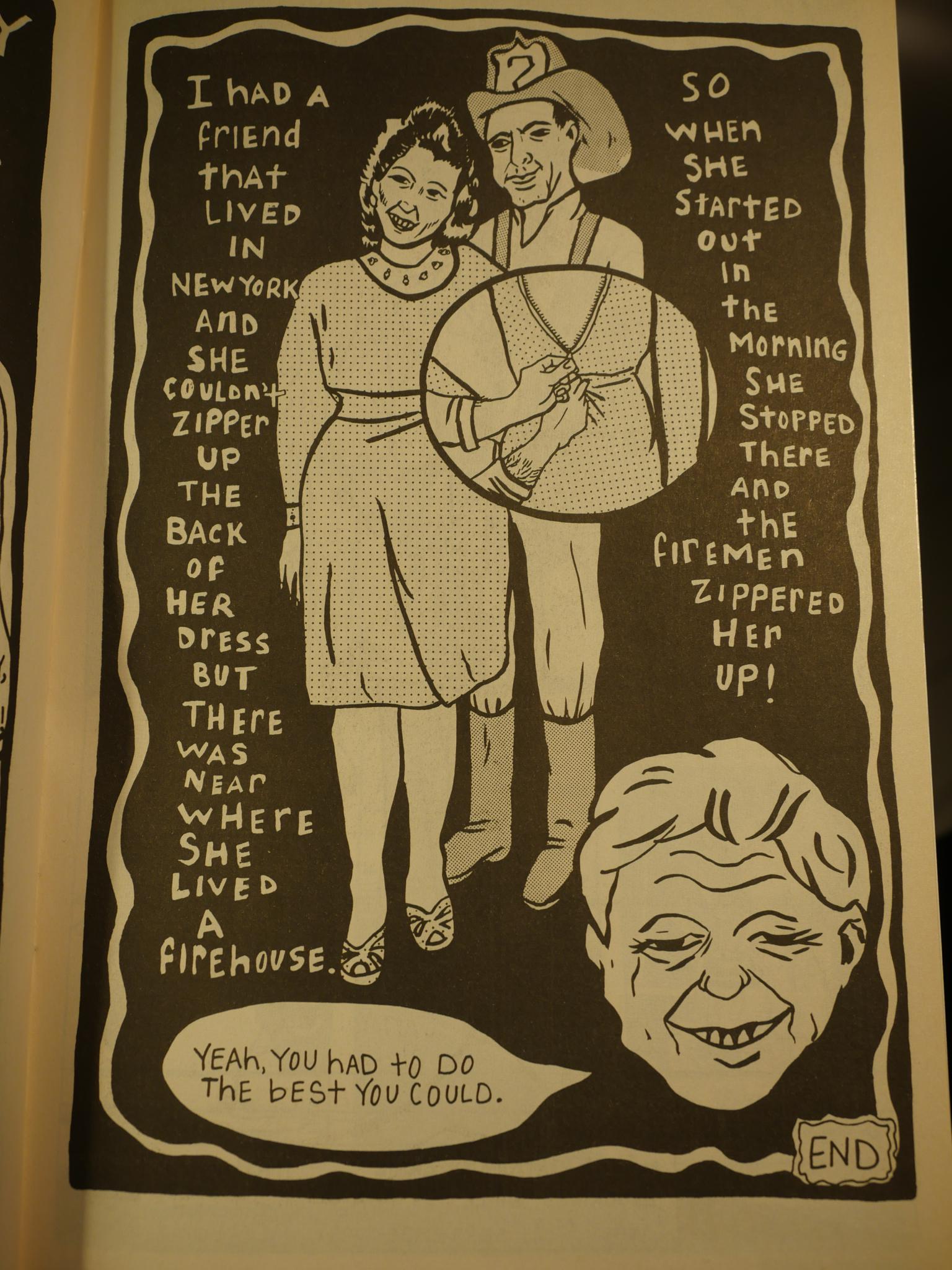 Firemen were so helpful in olden times. Illustrated by Gabby Gamboa. 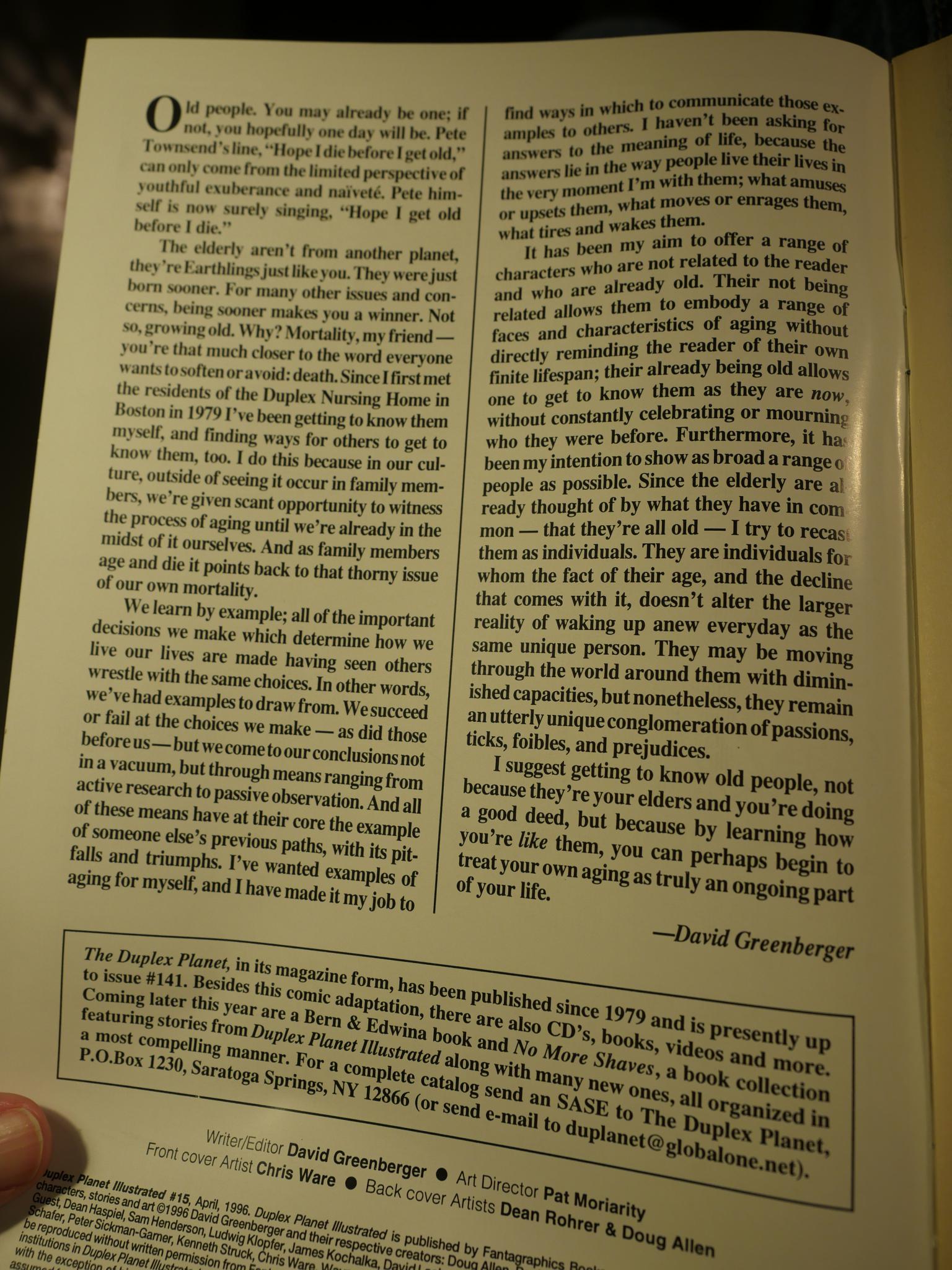 One of the things I liked about the Duplex reading experience is that there isn’t an editorial voice to explain what were reading: We’re getting old people talking at us, all the time. Of course it’s heavily remediated by Greenberger, but he’s not there to talk to us “in person” to tell us about what it all means, and that’s nice.

In the final issue he can’t help himself, though. 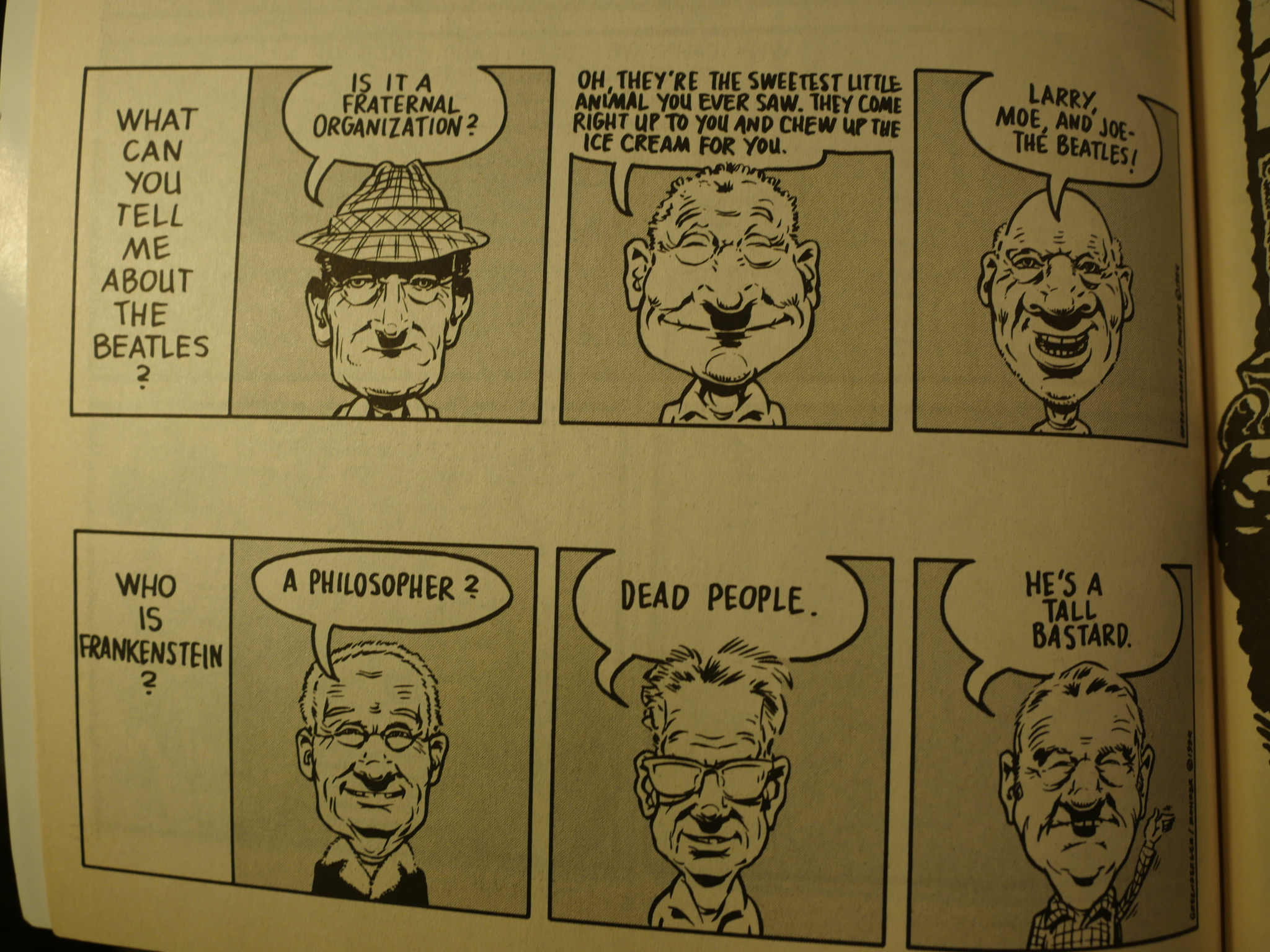 I read all these issues in one afternoon, and I think that was a mistake. Picking up an issue now and then would probably be satisfying: Spending a few minutes with these people and all these non sequiturs is fun. But after spending hours with them, I grew bored by the longer ramblings, and I grew annoyed at the “question time” pieces. Yes, if you ask senile people about random stuff, they will answer random things. Is this funny? Really? I guess it could be the basis of a TV show, and Bill Cosby could be the host, as usual in this genre. 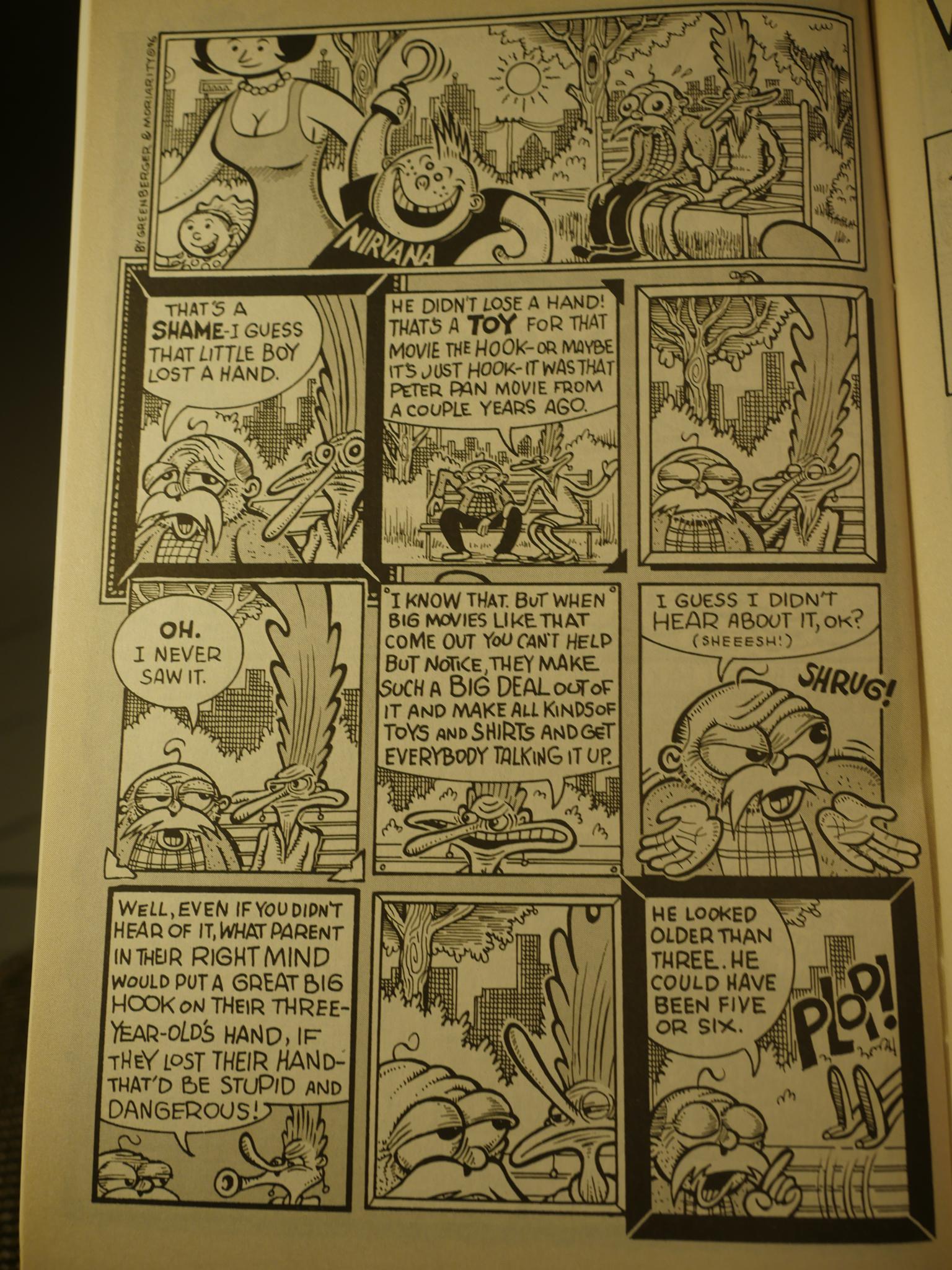 Let’s end the Duplex examination on a happier note. Still as cute a pair as ever. (Pat Moriarty art.) 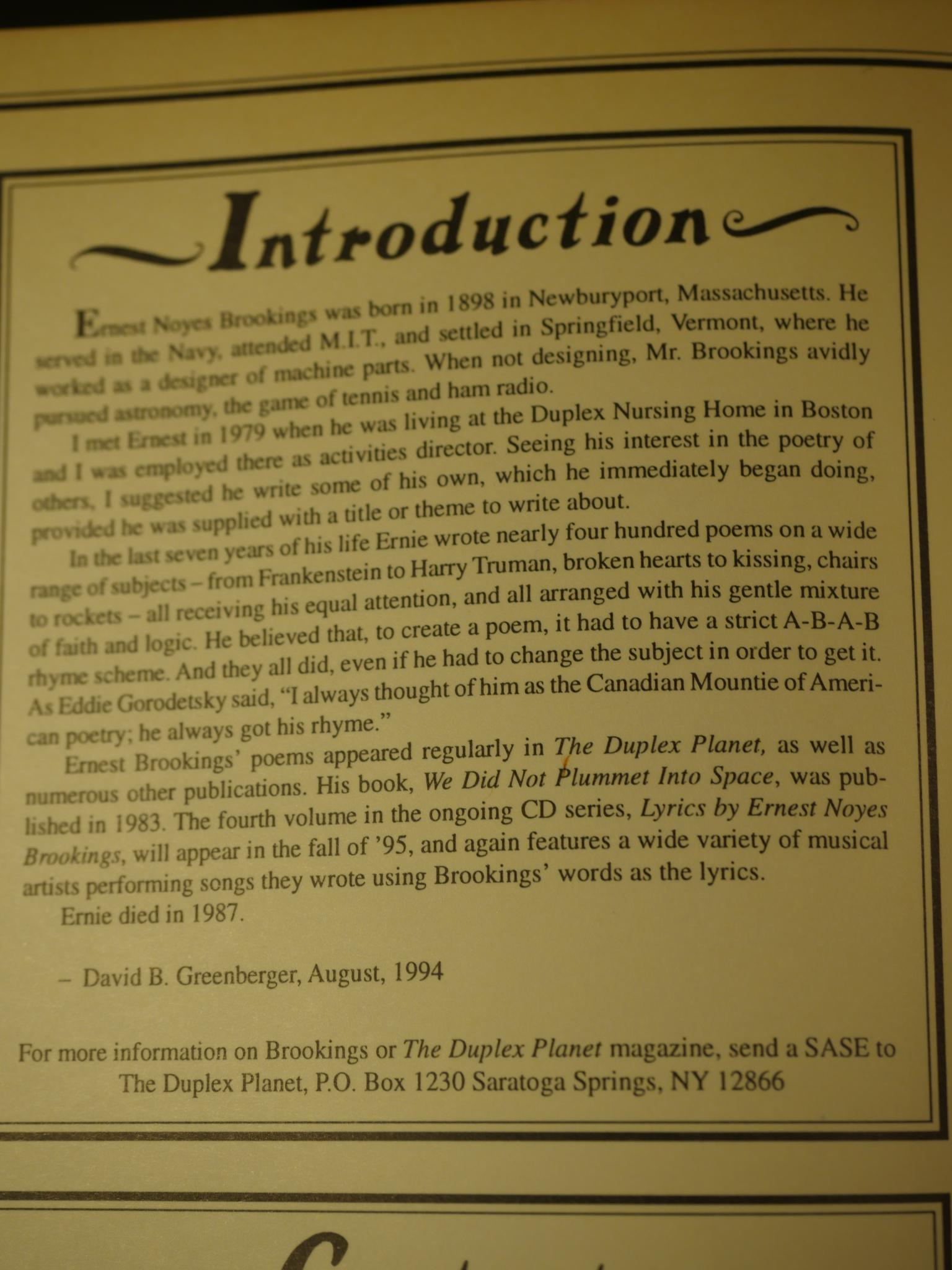 Greenberger also wrote a companion book, sort of, A Vast Knowledge of General Subjects, which are illustrated version of the poetry of one of the residents. 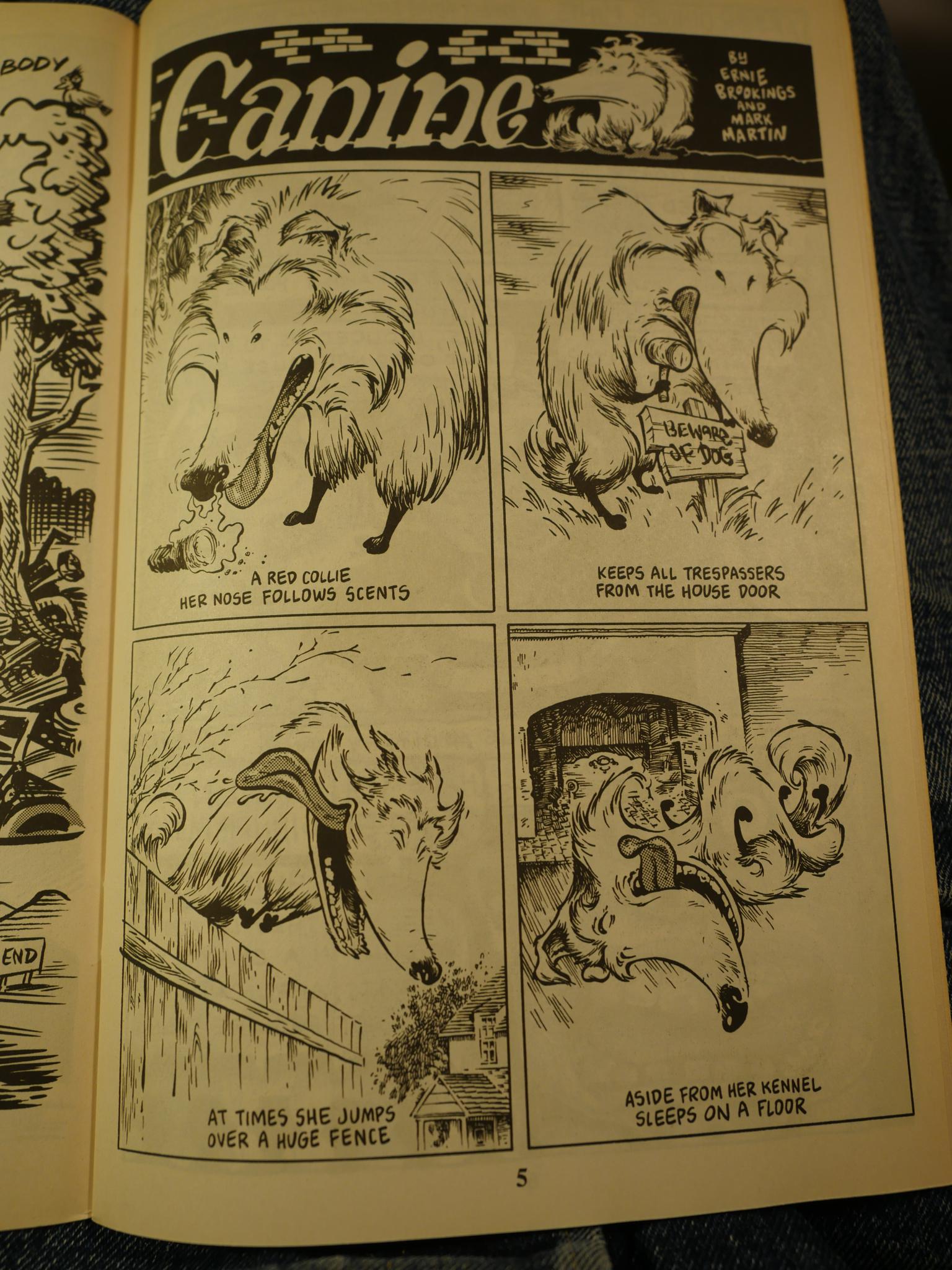 When there’s an exciting artist, like Mark Martin, illustrating them, it’s fun, but page after page of basically nonsense is a bit wearying.