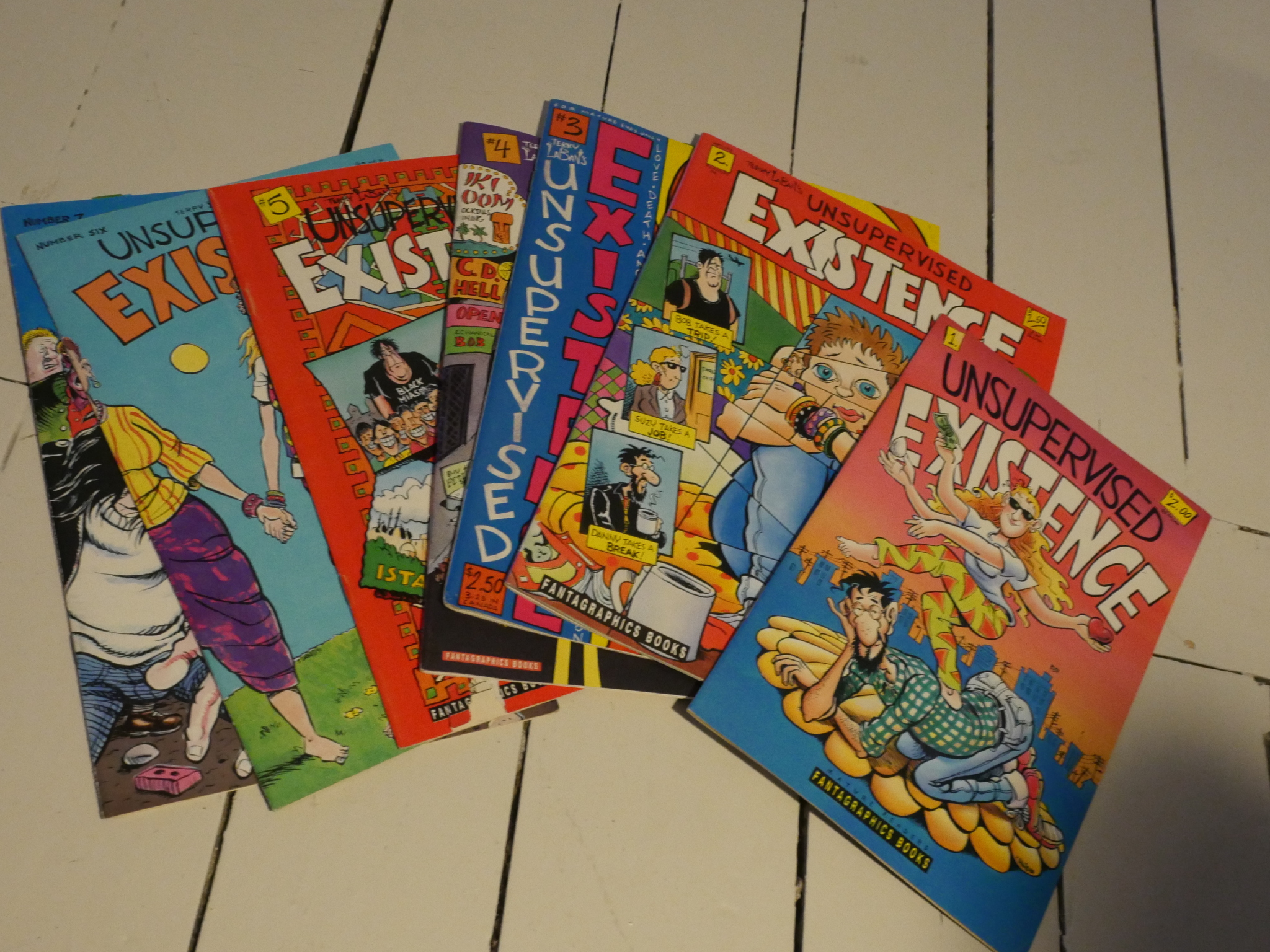 Wow.  I used to love this series. What happened? 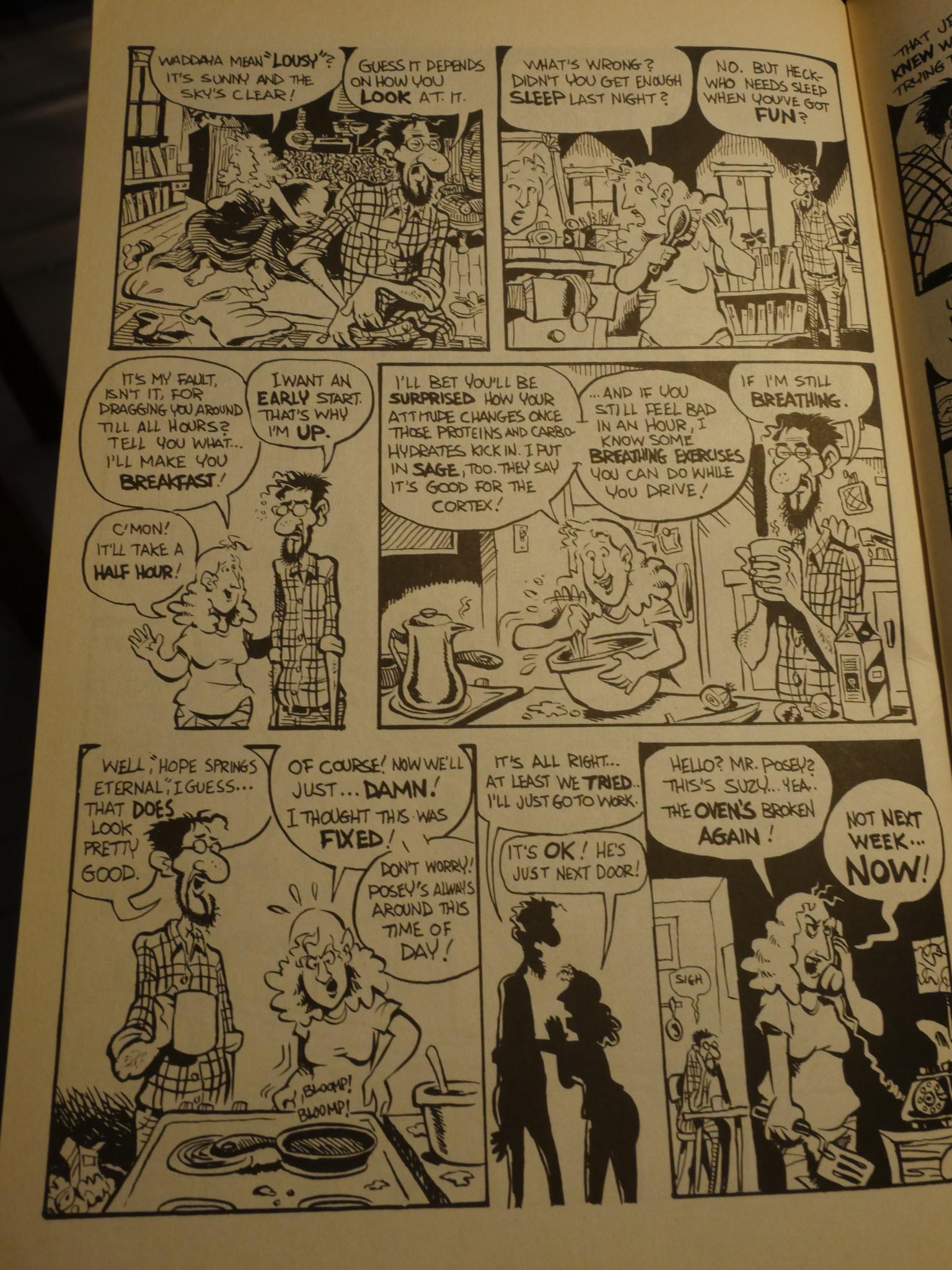 The main series in Unsupervised Existence is about this pair of people (and their friends). The series seems to be striving to be really real, and say something interesting about real people, living mundane lives. (He’s a cabbie. And a poet. But mostly a cabbie.)

But there you have the immediate problem. He’s a poet cabbie. She’s a dreamer wondering what to do with her life (but a very strident dreamer, as shown above.)

And sure, those are people that can exist, but they’re also characters straight out of indie film dramedy casting, and most of their lines reflect that. 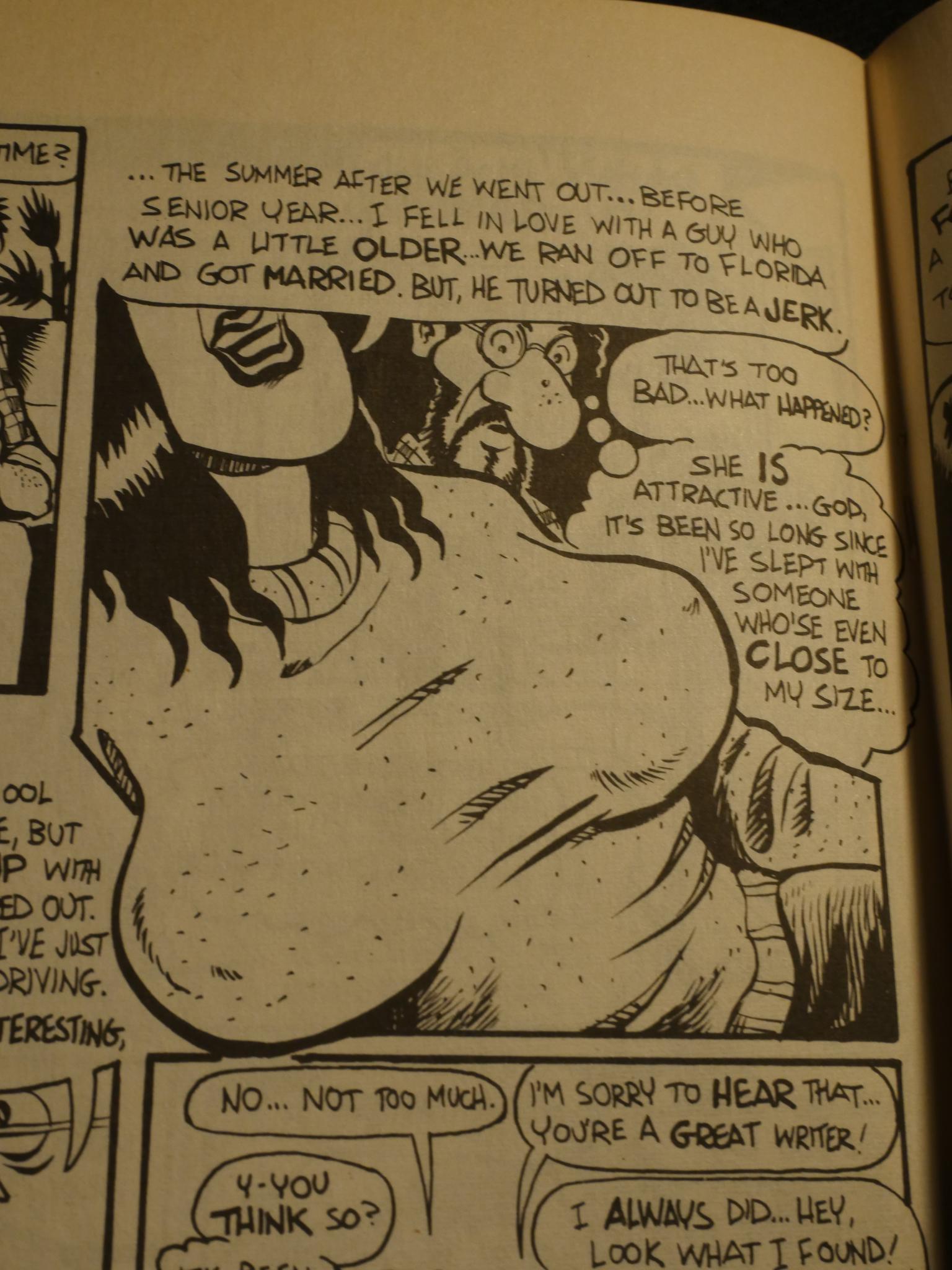 The artwork is better than the writing. It has a pleasing squishiness to it, and Laban isn’t afraid to make things go very subjective once in a while. 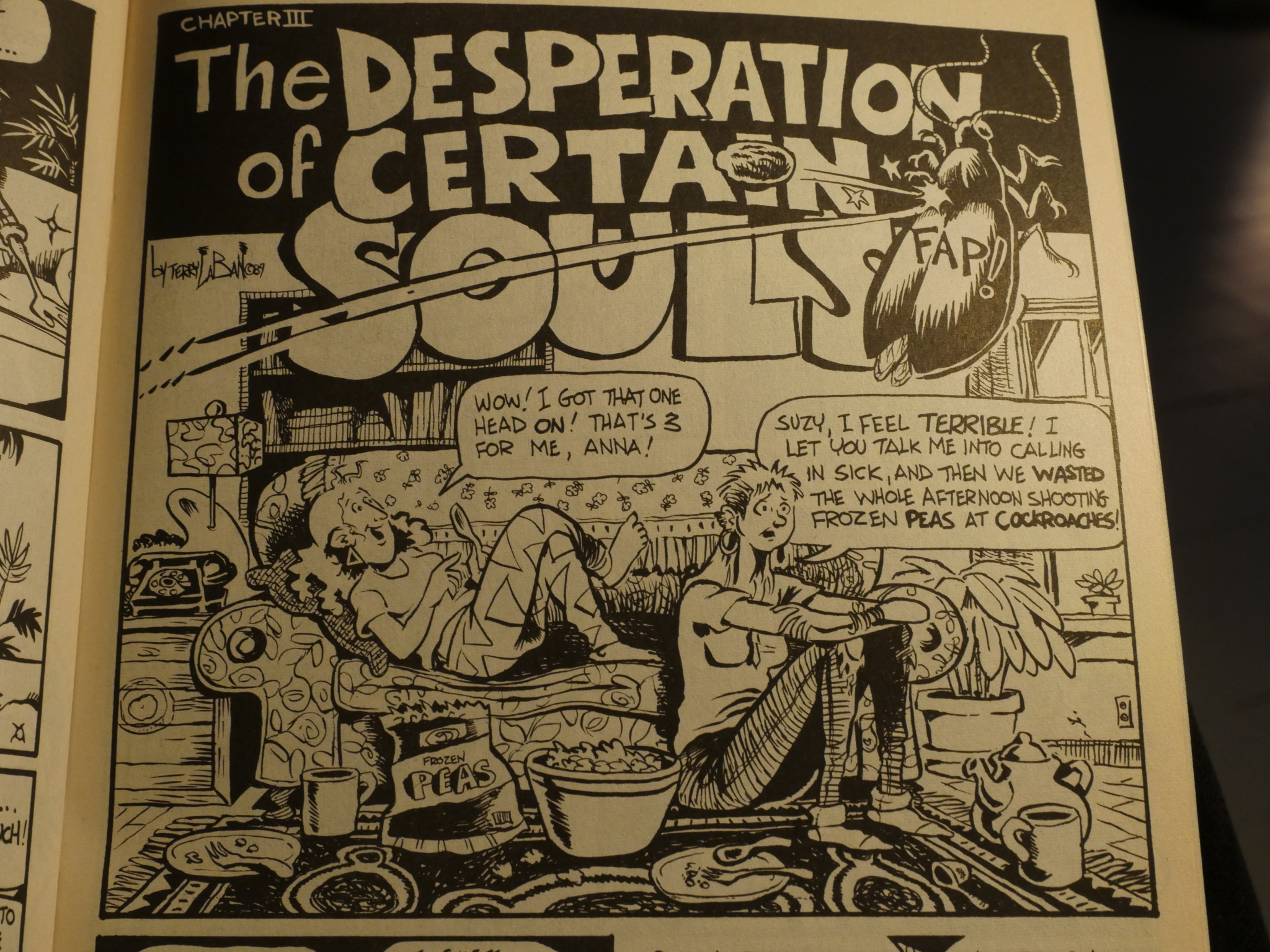 And there’s stuff to like here. Shooting frozen peas at cockroaches as entertainment? Sure! But also just look at that drawing… I like those objects. That tea mug. That sofa. That carpet. That pose. I mean, it’s not something that would stop you in your trackswhile reading, but it’s all there. It’s good. 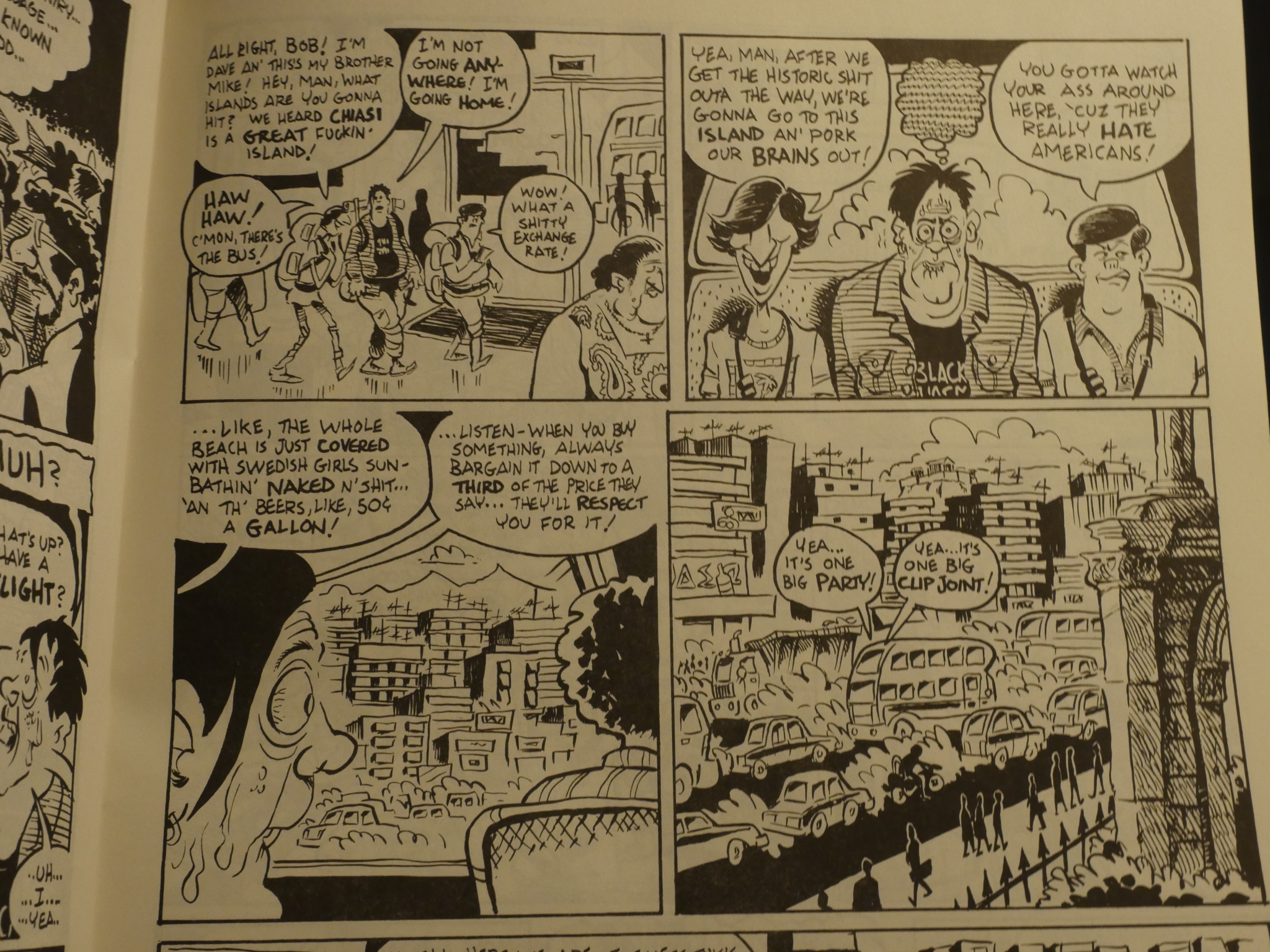 In issue two we move to a magazine format, and we’re really introduced to the other main serial. It’s about a performance artist called Bob who goes abroad. Hilarity ensues. Or rather, much American-abroad-angst. It’s fine. But, like the other strip, it’s very wordy. 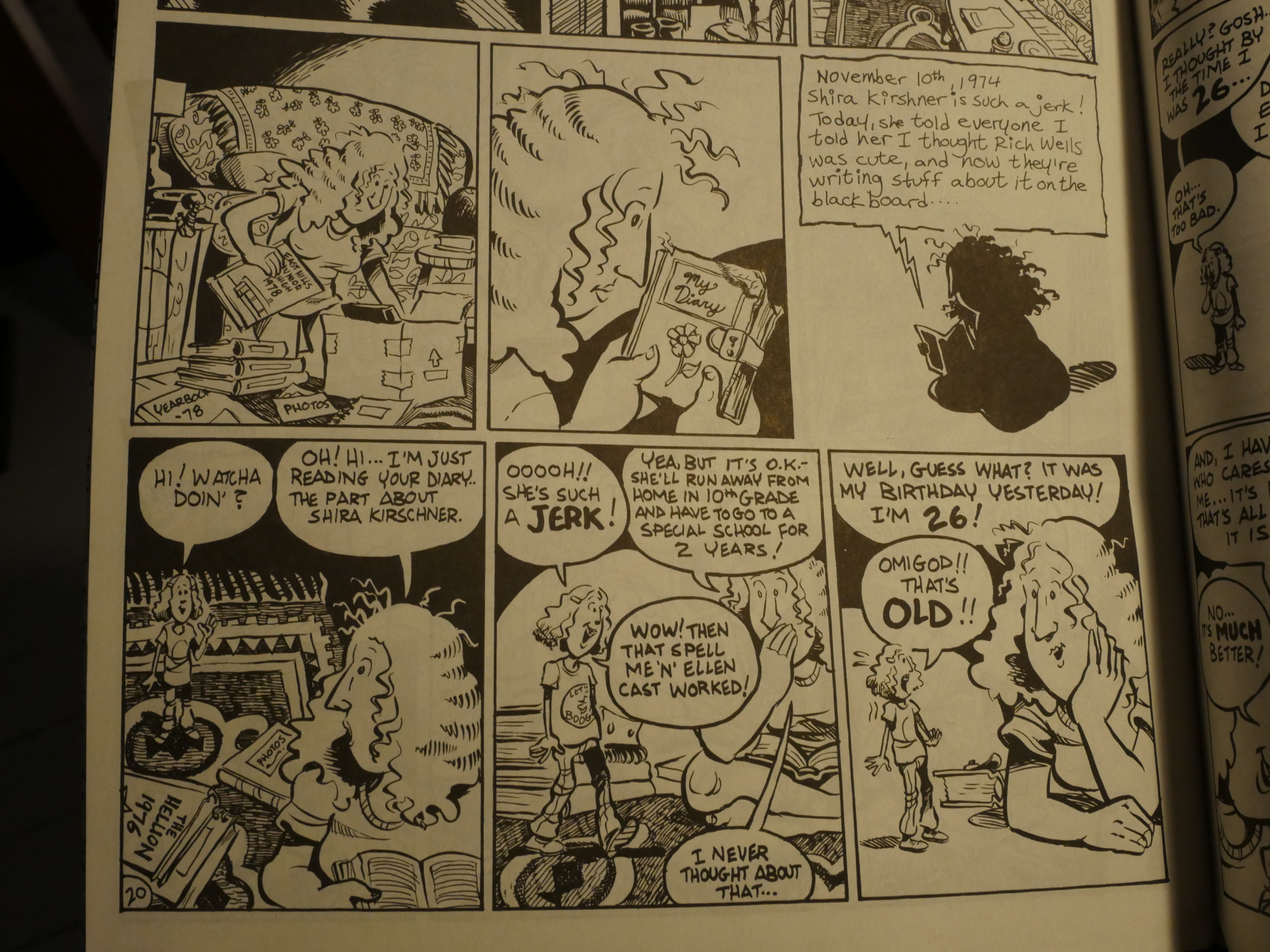 Here Suzy meets her childhood self. You’ve seen this scene in quite a few tv series, haven’t you? 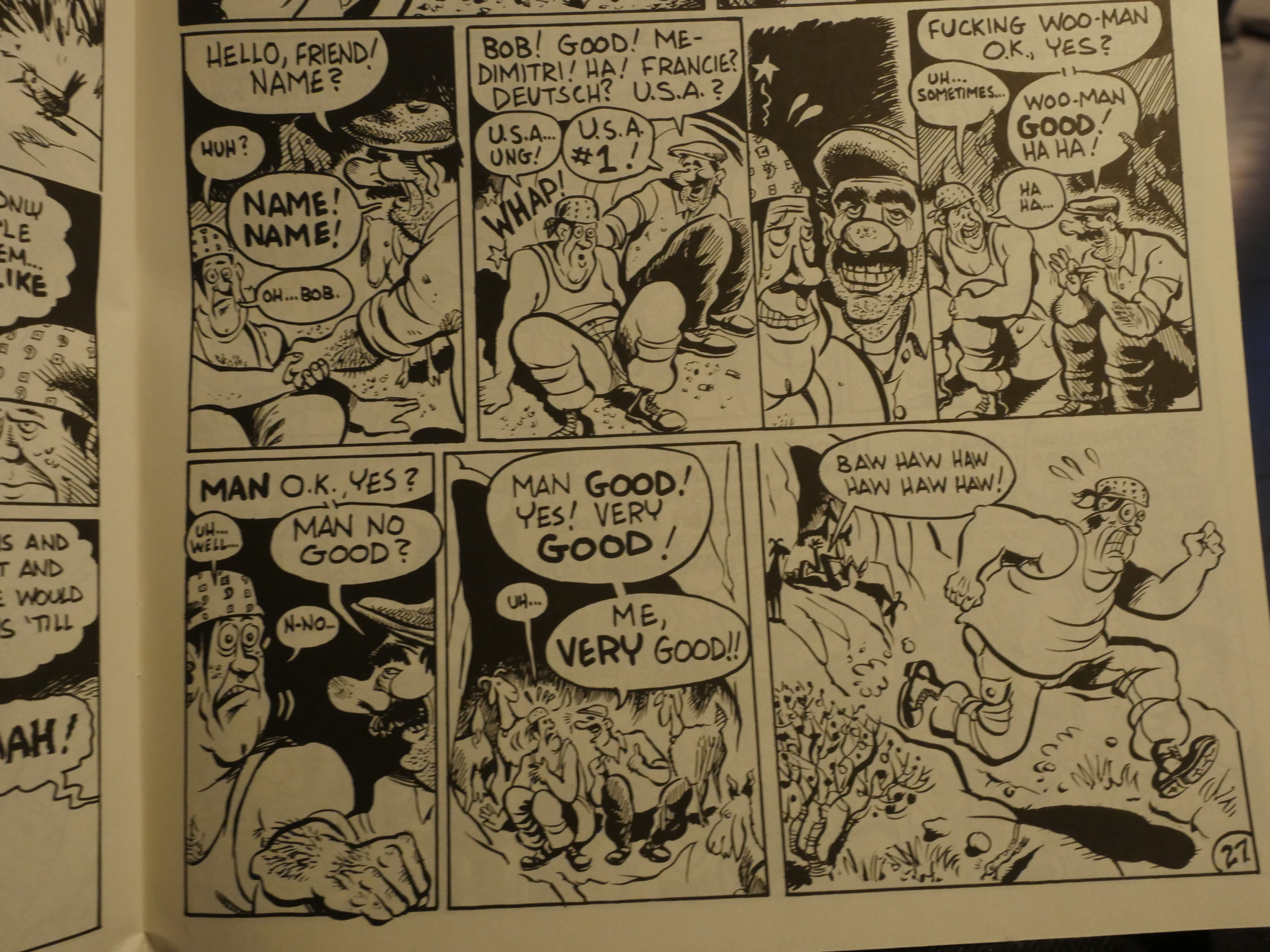 And Bob in his first of a series of gay panic shticks. *sigh* 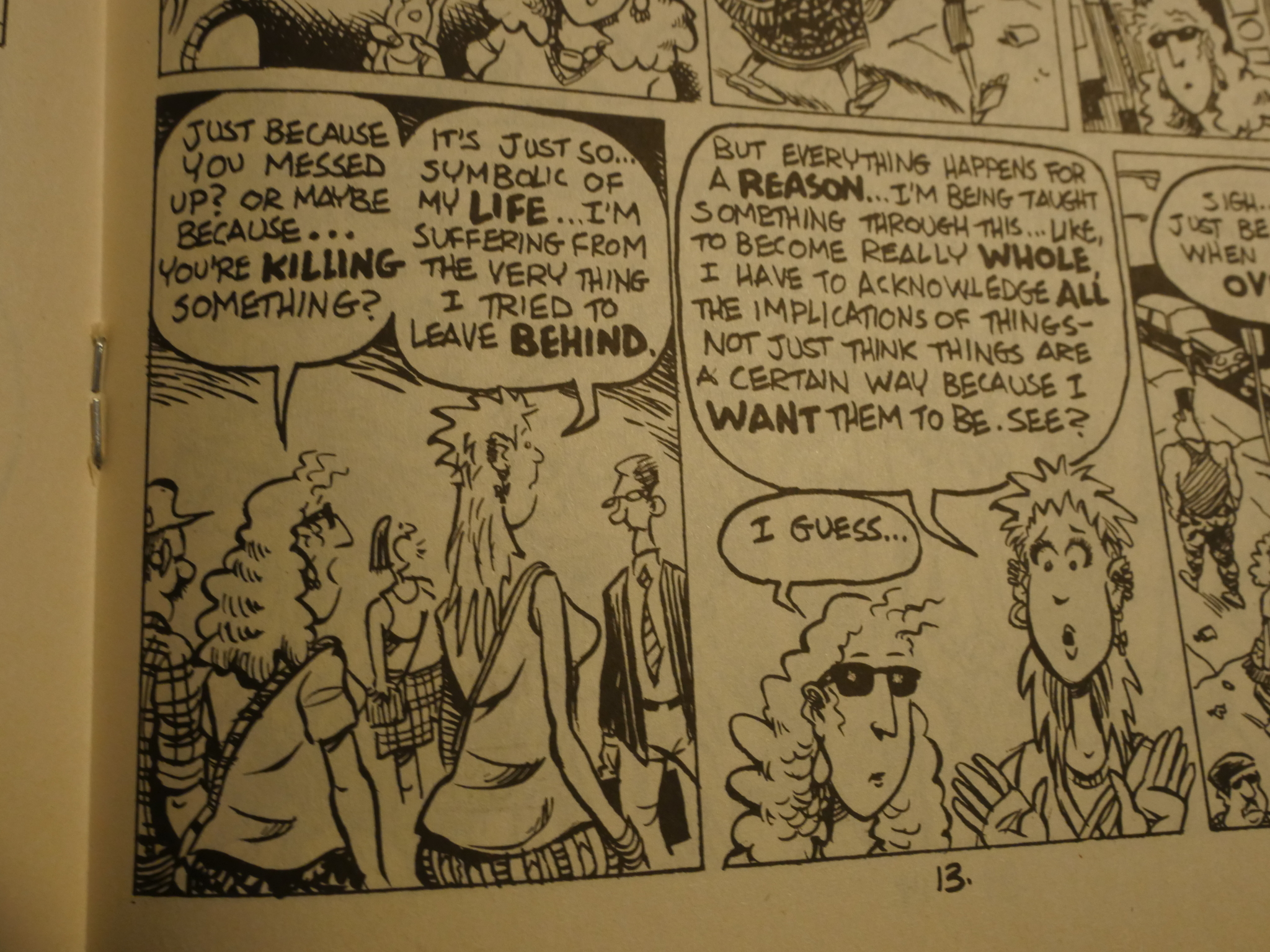 In issue five we revert to the standard comic book format. I think this is the only series I’ve seen that gone from comic book to magazine and back to comic book again?

Anyway, the soap opera keeps on rolling, with pregnancies and abortions and very long, deep and meaningful conversations. 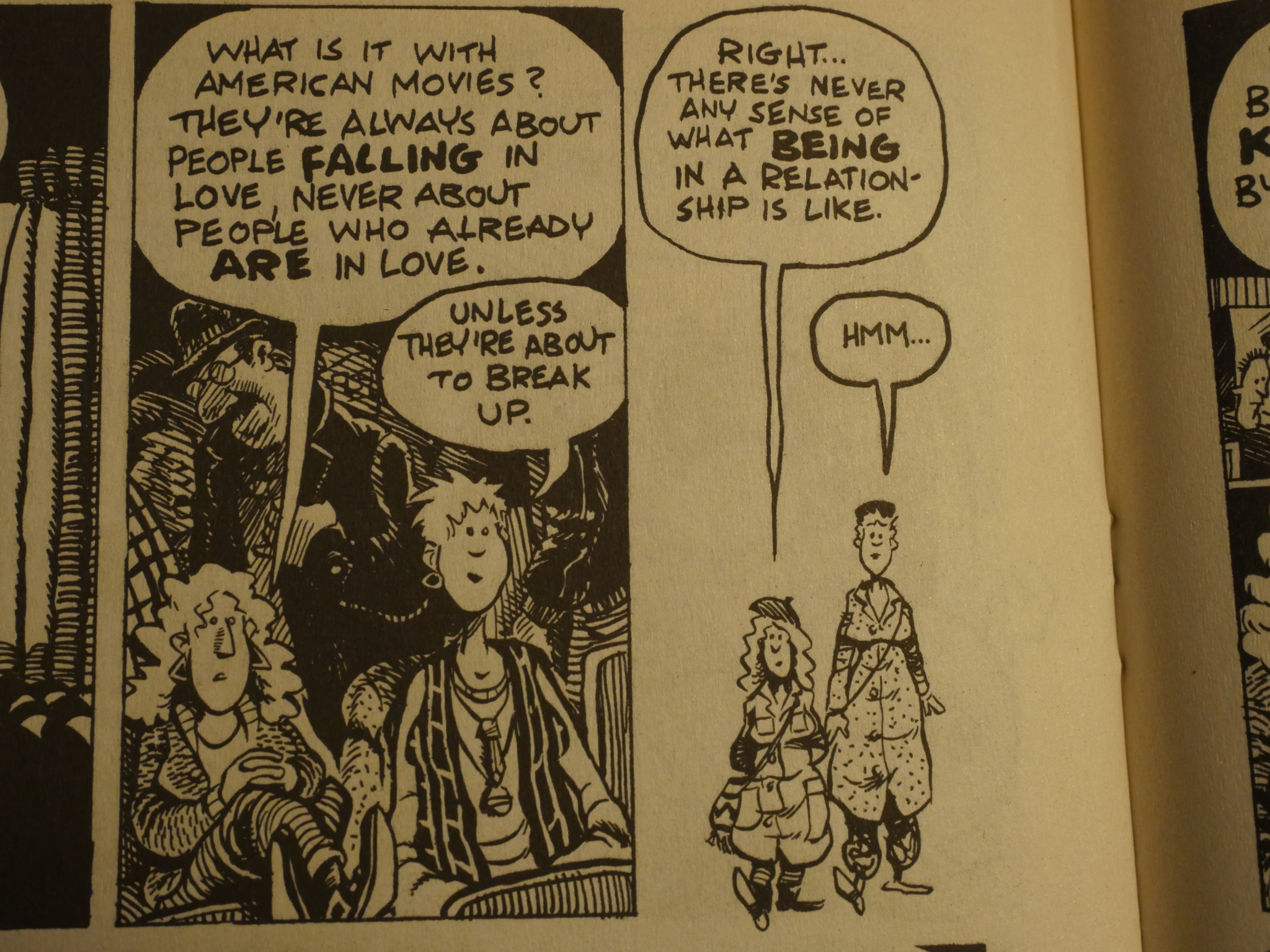 In the final issue, I think Laban states out loud what it was that he was trying to do with Unsupervised Existence. And that’s a fine goal, but I don’t think he succeeded. I mean, I really thought so back then. Back in the early 90s, I thought that its unsensationalistic, mundane storyline was such a breath of fresh air. Just a relaxing meander down these character’s paths. Reading this now, I found it tedious.

Perhaps it just seemed important back then to see that comics could try to handle this stuff? While now it’s like “duh”. And if you do, it had better be really good. 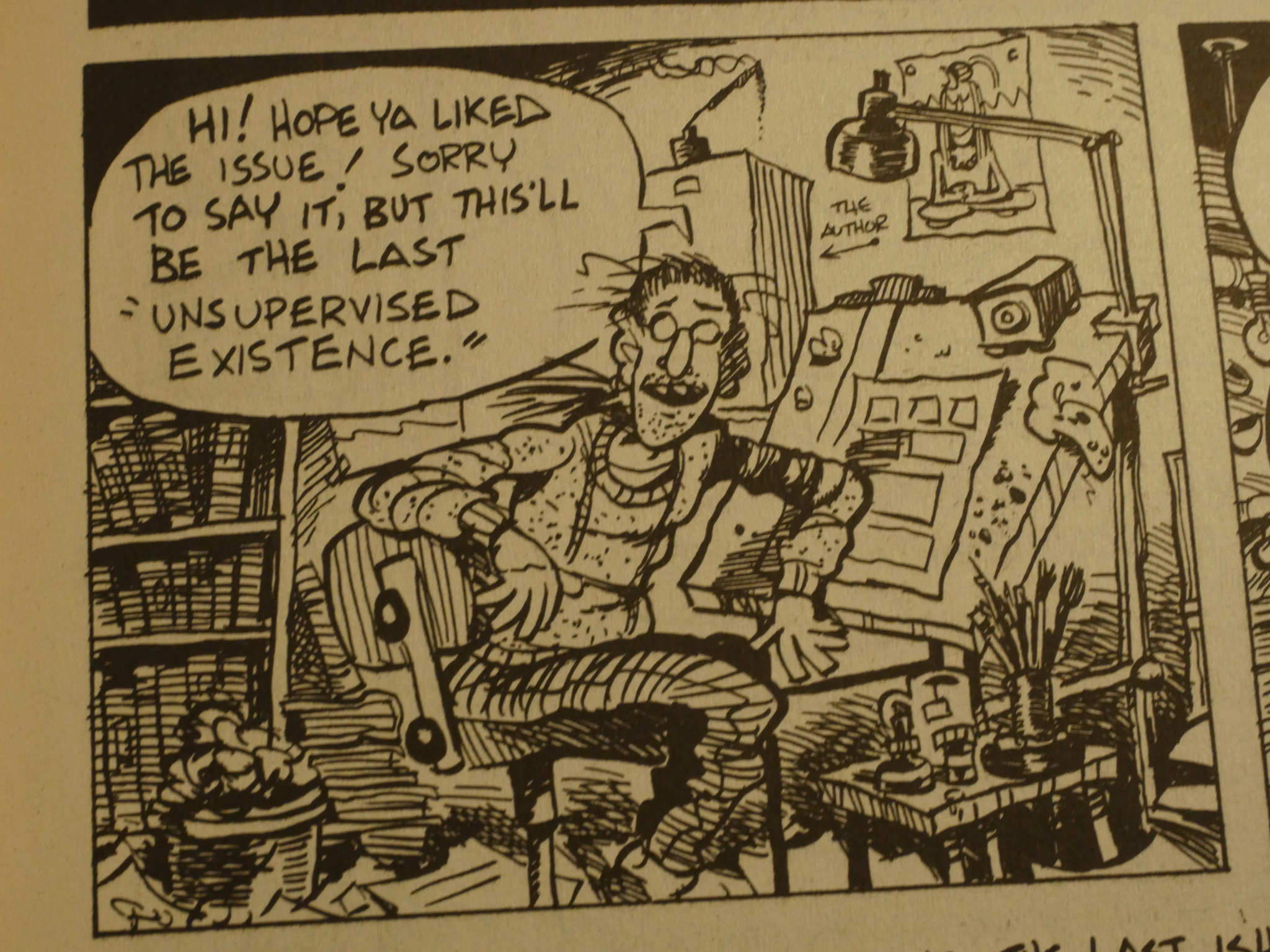 And Laban signs off without bringing any of the stories to any kind of satisfactory ending.

I don’t know whether Laban was as bored with this series as I am now, but he certainly went down another path with his next series, the very successful Cud, which is a spin-off from Unsupervised Existence, sort of. It features the Bob character, but has a completely different tone, if I remember correctly.

One thought on “FF1989: Unsupervised Existence”