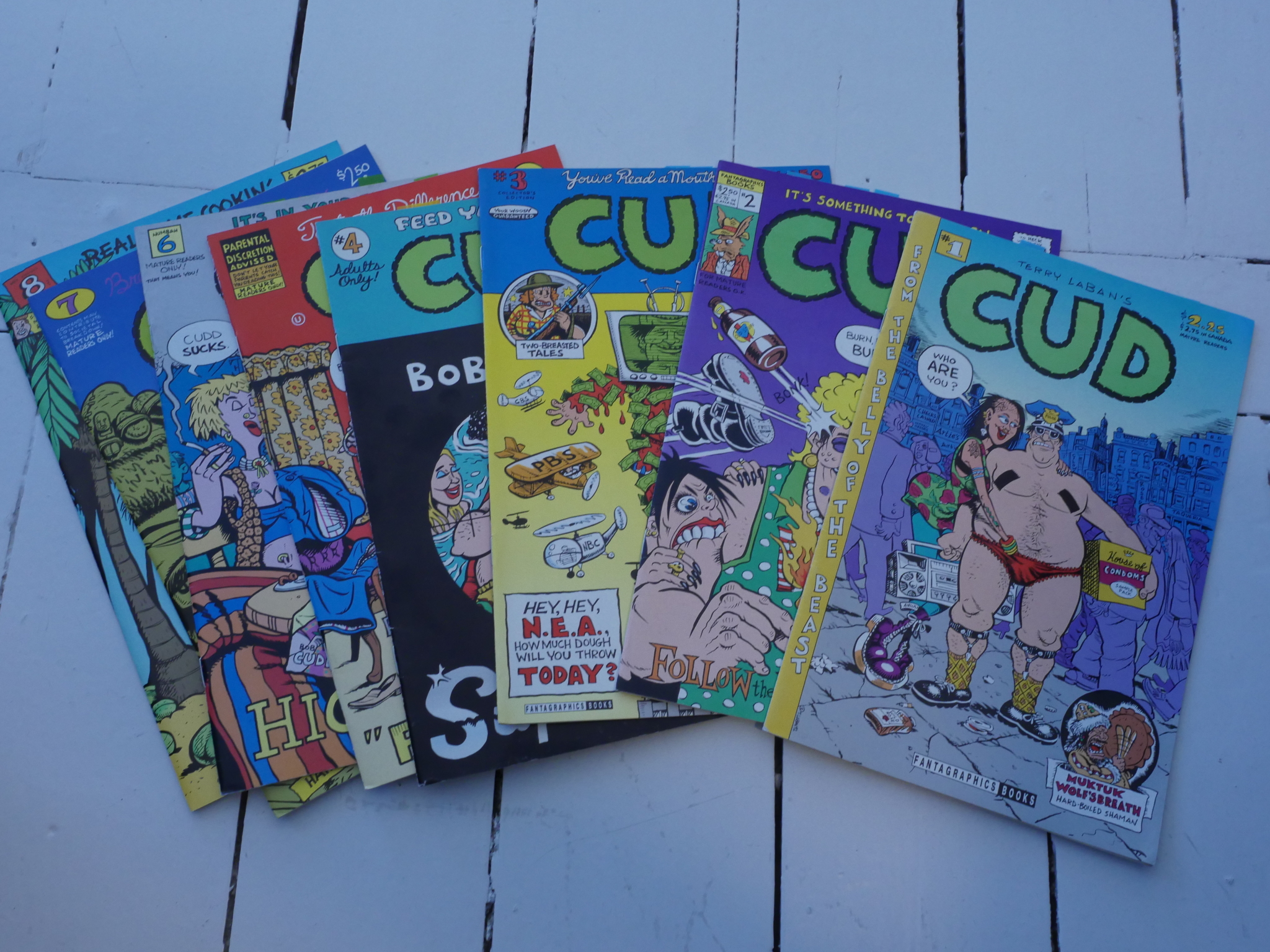 Slight digression here: What’s become clear during this marathon Fantagraphics comic book comic re-read is how many of their books are anthologies or single person anthologies. While it’s hard to come up with a firm definition of the term “anthology”, I would guess that more than eight tenths of the total published output is something that could reasonably be called an anthology, and I didn’t realise that at all before I started this project.

I wonder why that is. I think this is a more pronounced ratio than what you’d find at their peers (or peers-ish-es). Sure, Kitchen Sink, Drawn & Quarterly, Tundra, Alternative and etc also do this, but I think picking up comics from them you’re more likely to read a piece that lasts more than 14 pages before something new is happening. And that seems to be in the definite minority in Fantagraphics floppies.

Is it the underground influence? The undergrounds were also often centred on shorter stories… Is it the relative lethargic publishing schedule? If you’re only releasing an issue every four or five months, perhaps you want to give the readers more than just “here’s 22 more pages from that serial you probably don’t remember all that well any more”. Doing shorter pieces allows you to do compressed stories that are more satisfying in that context?

Anyway, Cud is a prime example of a Fantagraphics single author anthology. 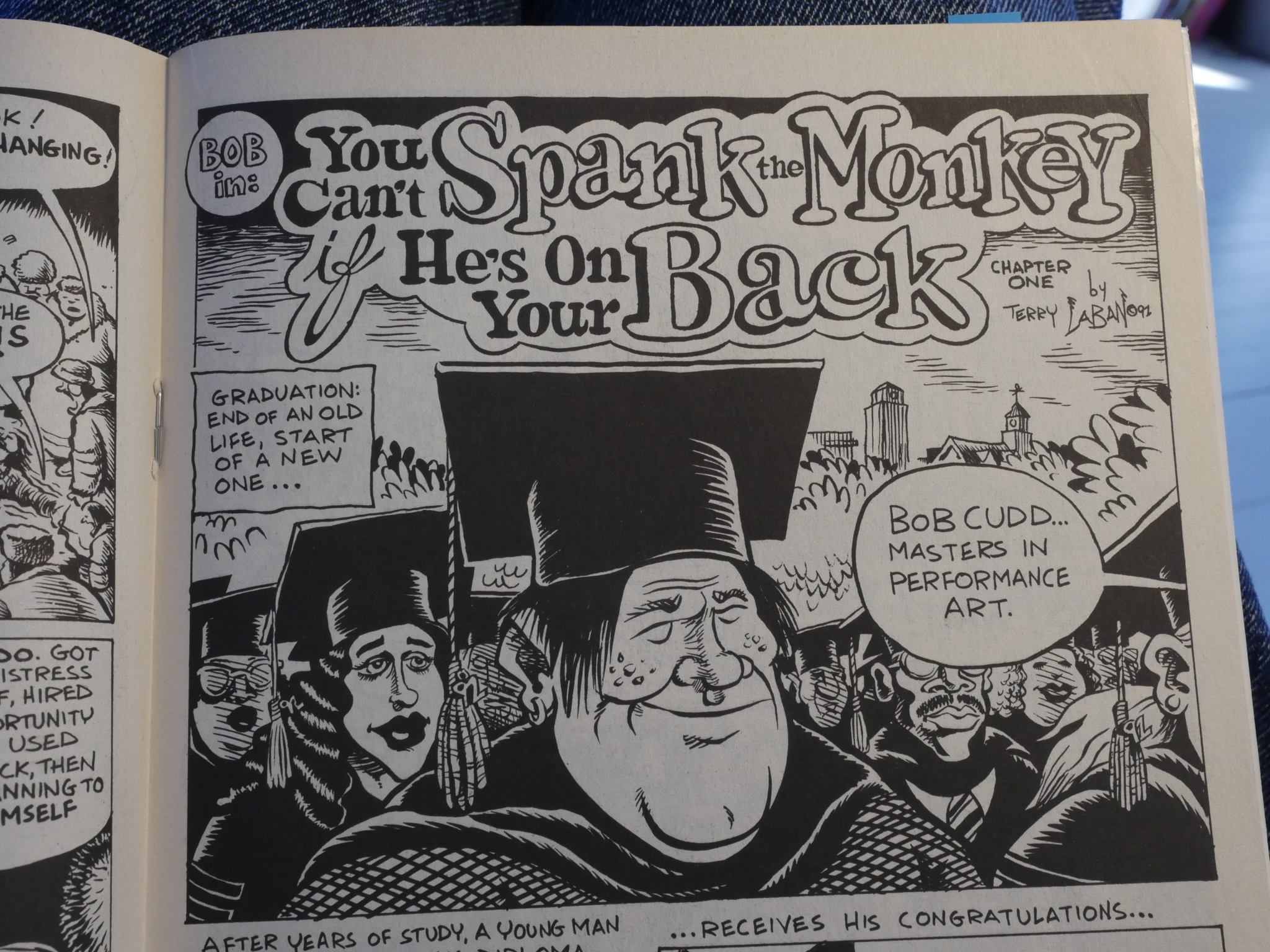 In each issue you get around ten pages of a continuing serial (this one is about the aforementioned Bob Cudd, here receiving his masters)… 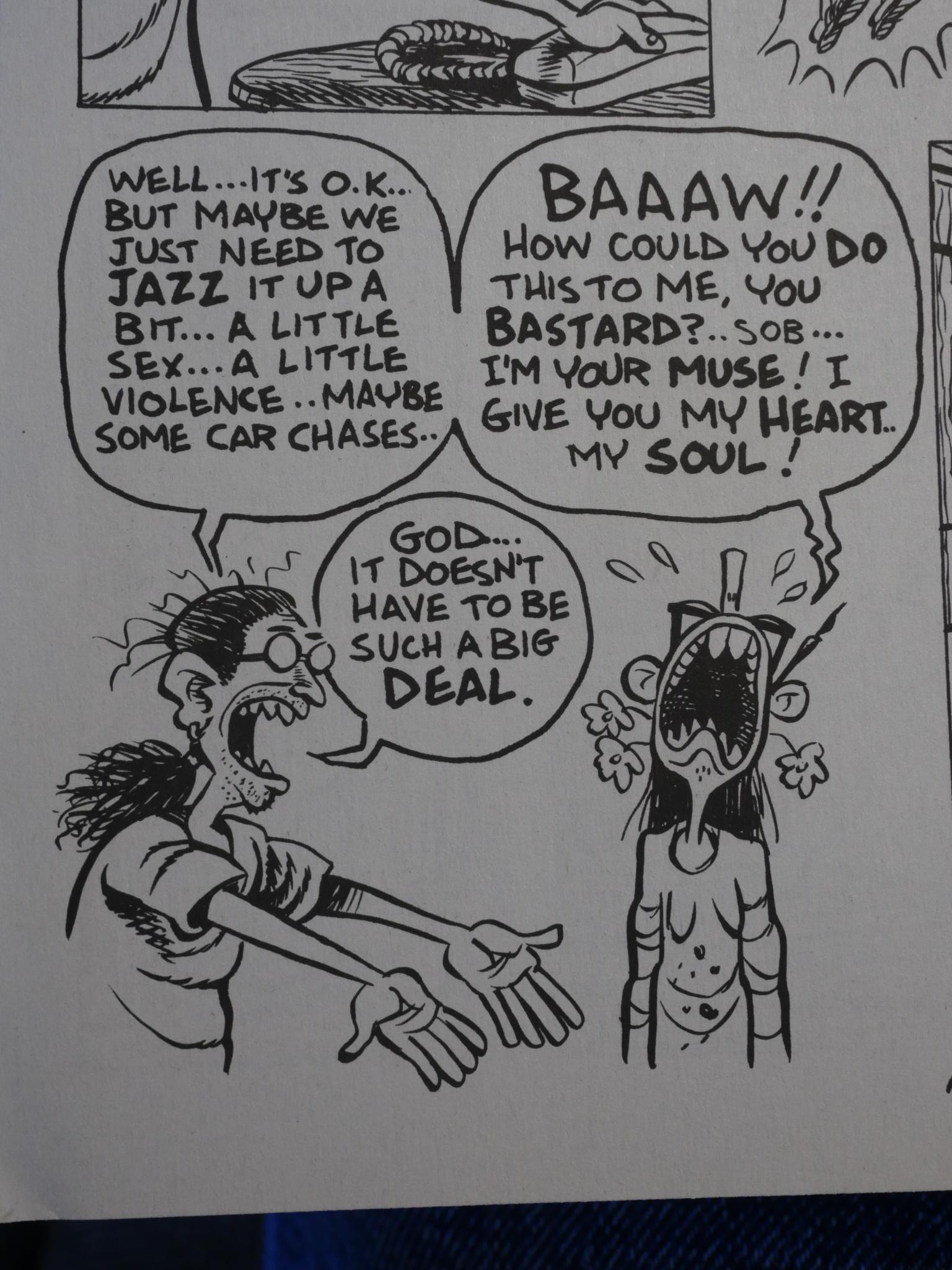 And the rest of the pages are whatever Laban wants to put in there. This piece, for instance, is (I think) an explanation of sorts of why Laban is doing Cud instead of the sensitive Unsupervised Experience. (He ends up prostituting his muse.) 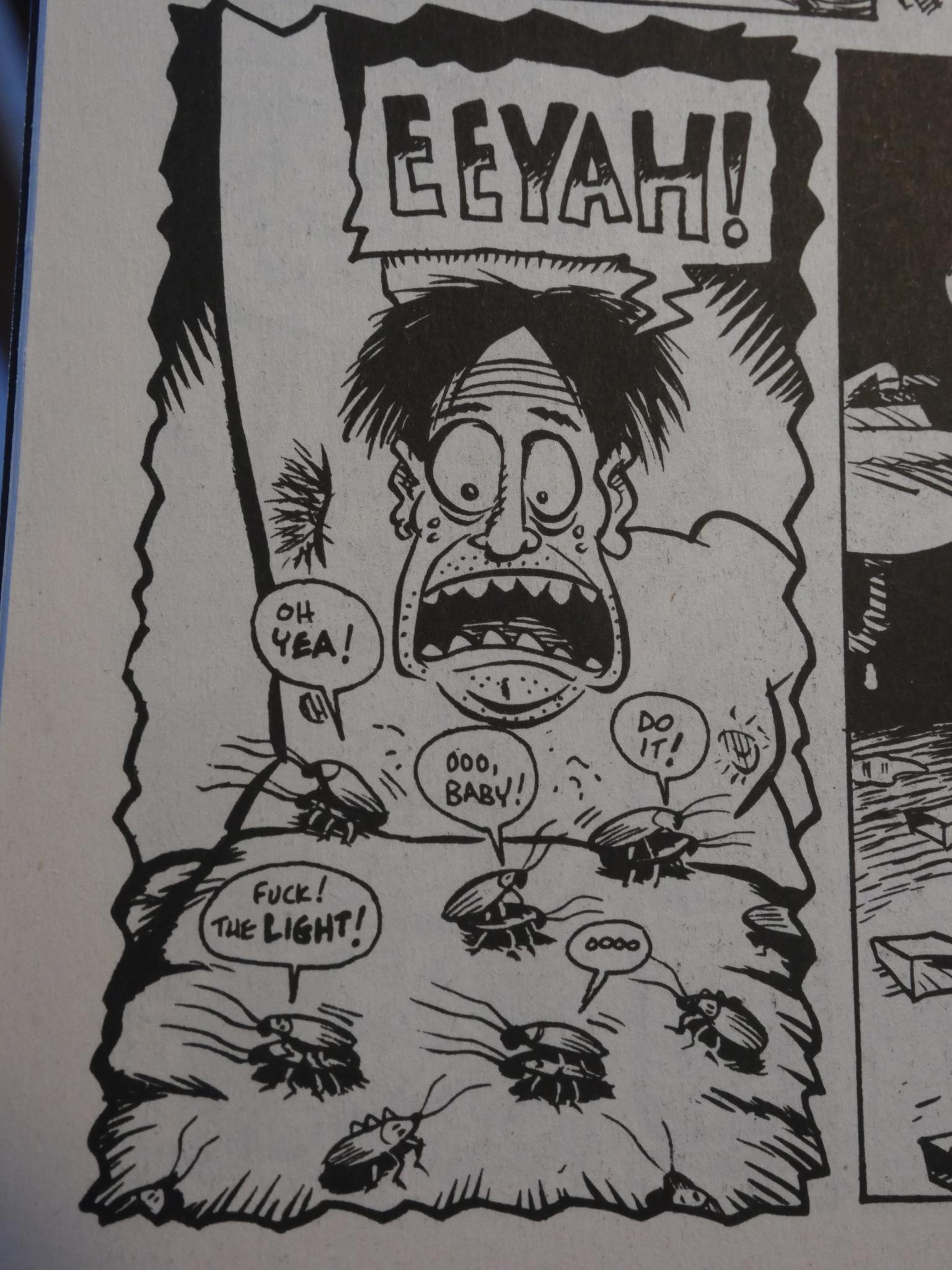 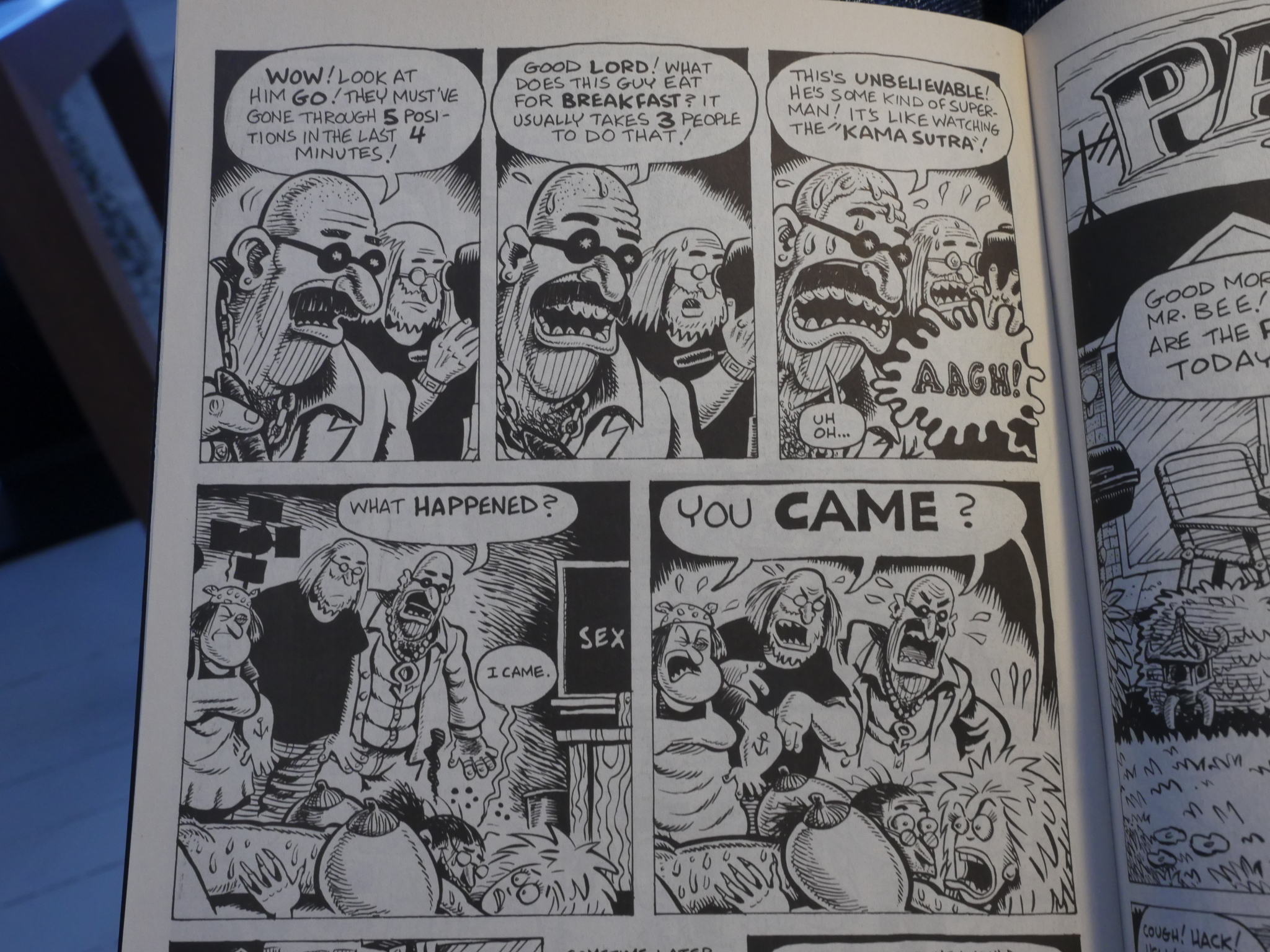 Laban contemplates taking up another line of work instead of doing comics, but it has a happy ending. I mean, it doesn’t. 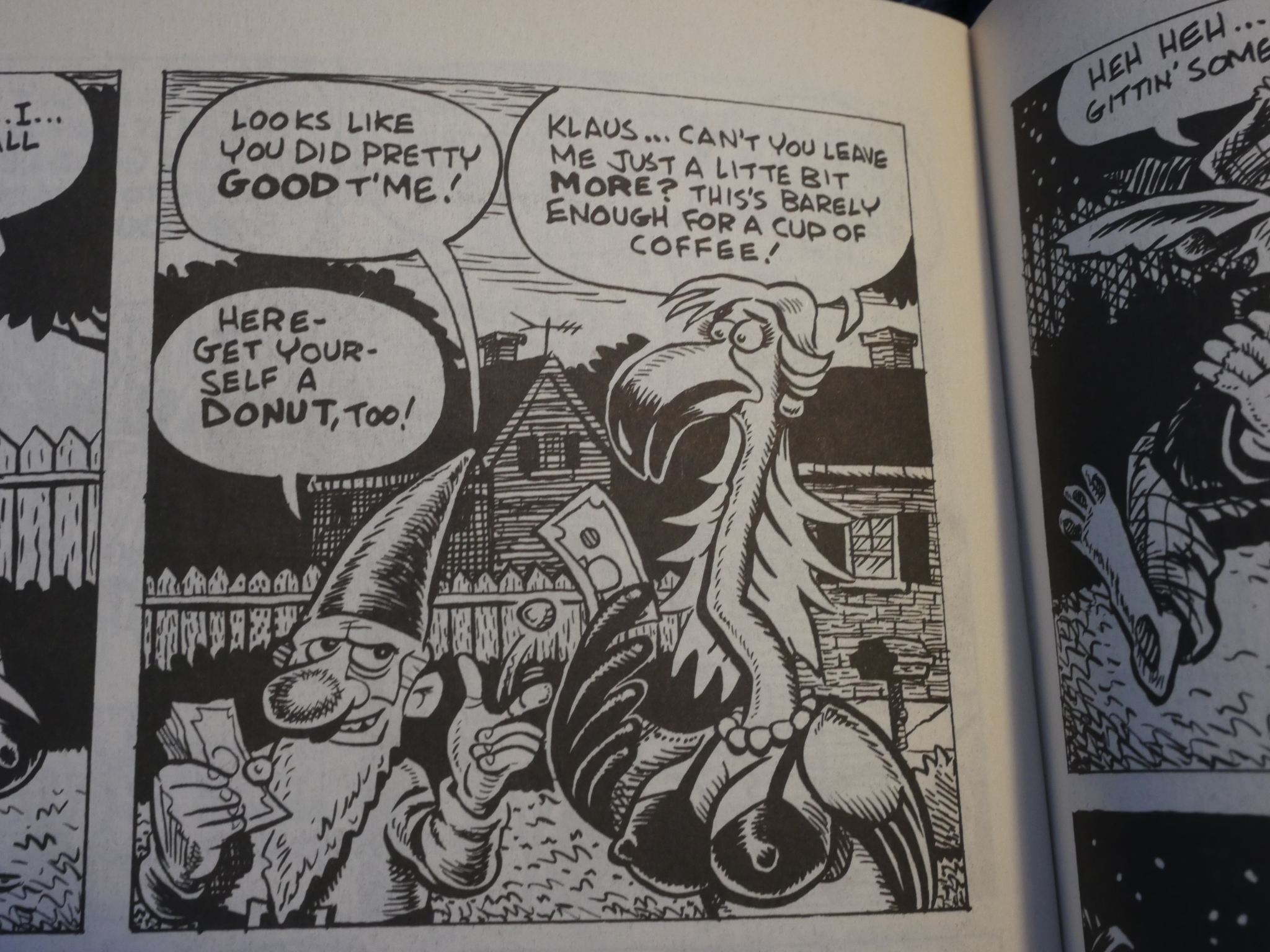 One of the wonderful things about Cud is just how random it all is. Without any explanation, suddenly we have a story about garden gnome pimps and flamingo working girls. 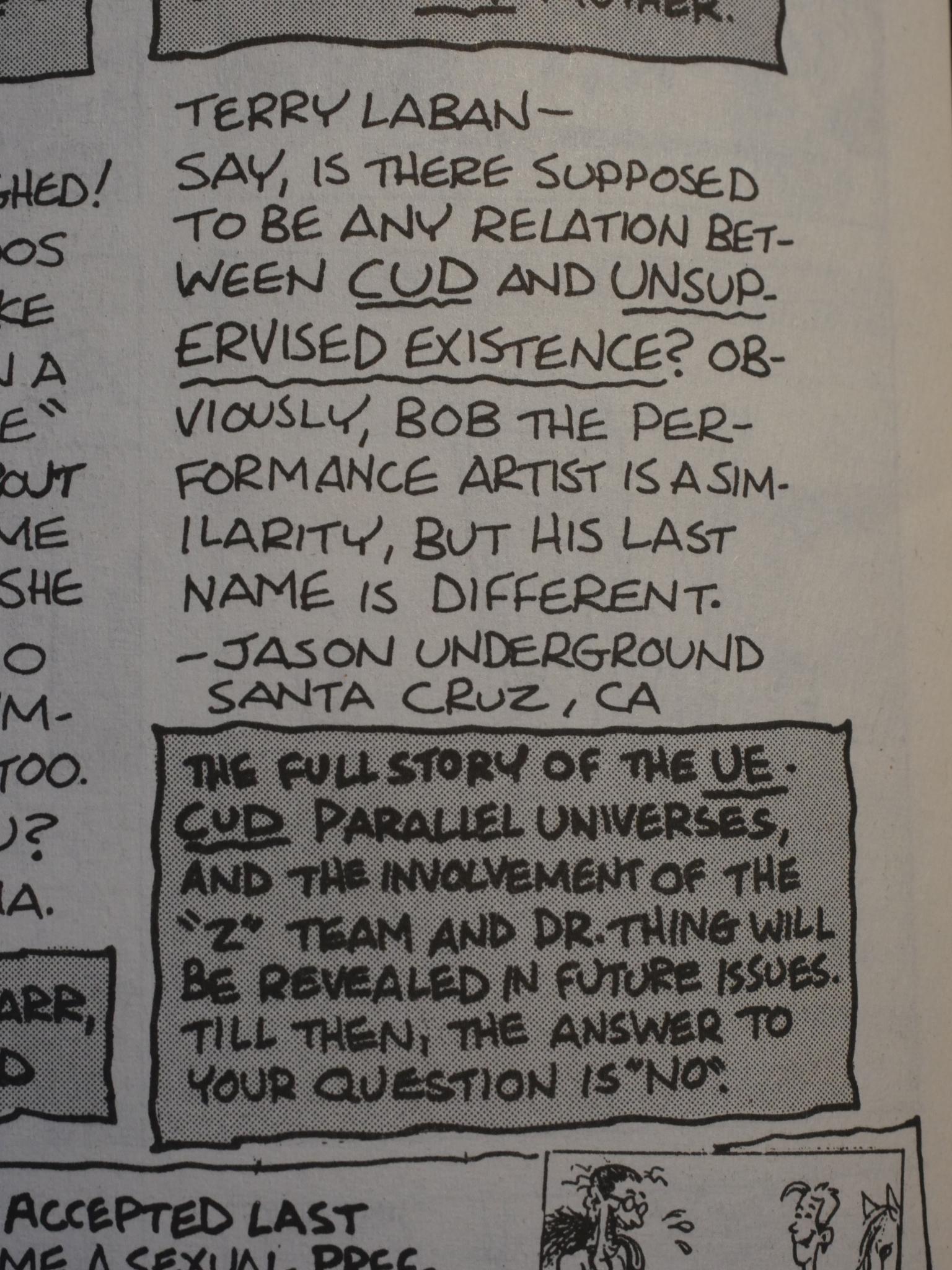 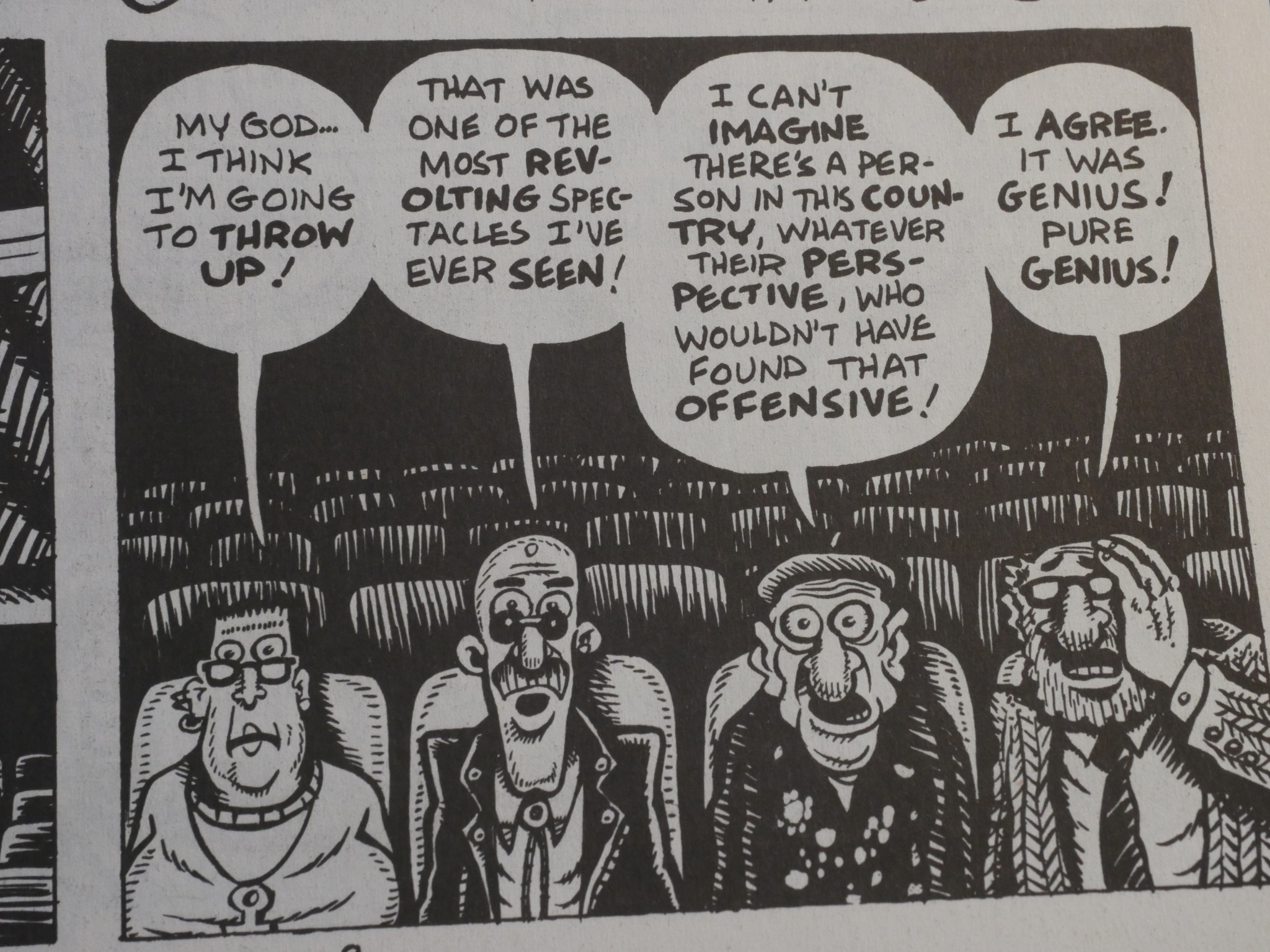 I get the impression that Cud wasn’t nearly as popular as the other slacker undergroundish funny comics they published at the time (like Naughty Bits and Hate) and I think perhaps one of the reasons is that it’s difficult to say what Laban’s position on the things he makes fun of is, exactly. Here we have the NEA deciding to award money to Bob Cudd. So is that a comment on the NEA and how people got upset that they awarded money to people like Andres Serrano (who did Piss Christ)? 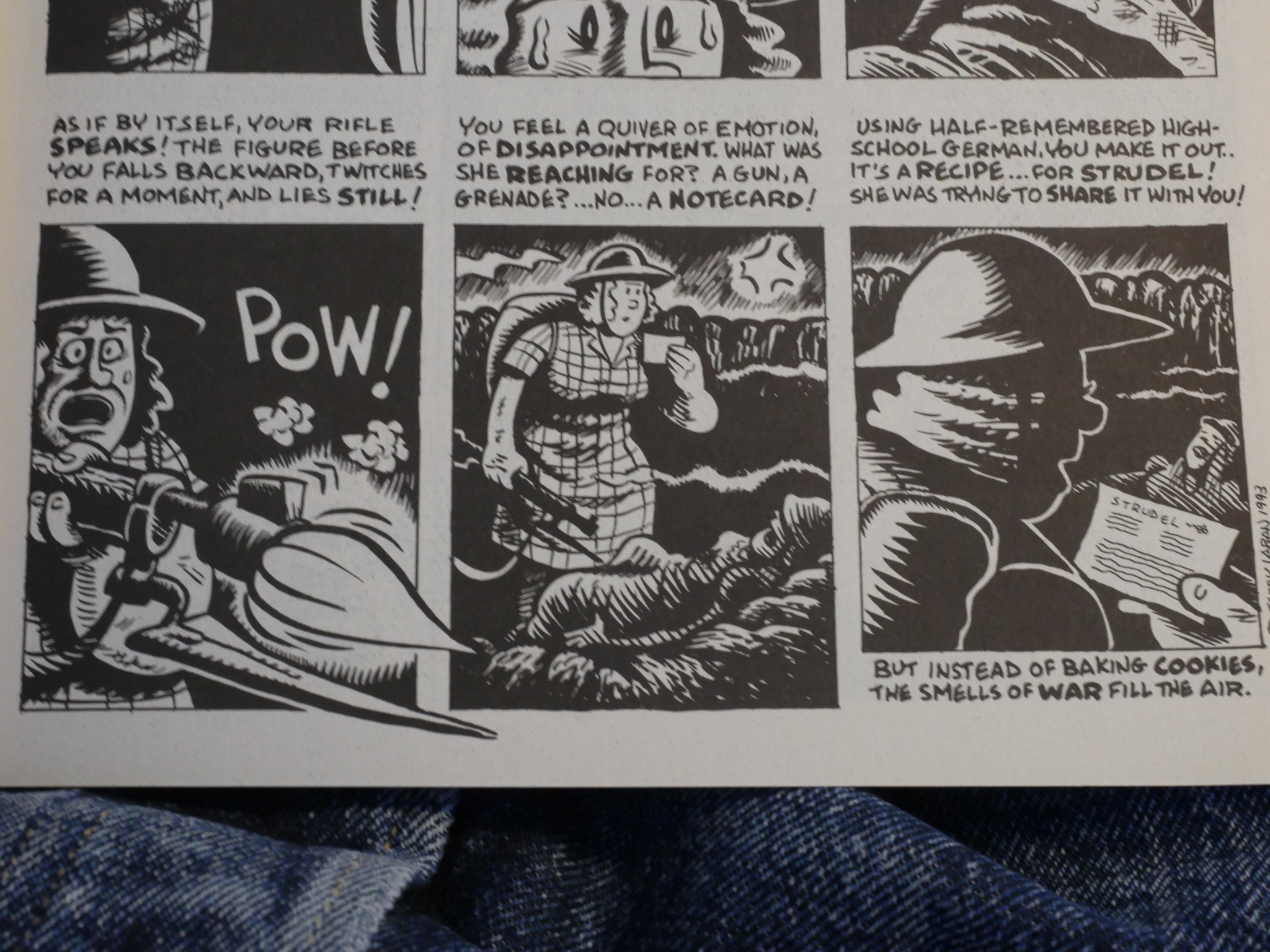 Here we have a parody of an Harvey Kurtzman anti-war story, and the twist is that all the soldiers in the story are women. Just what is Laban saying here? That he’s an asshole? WAT!!! 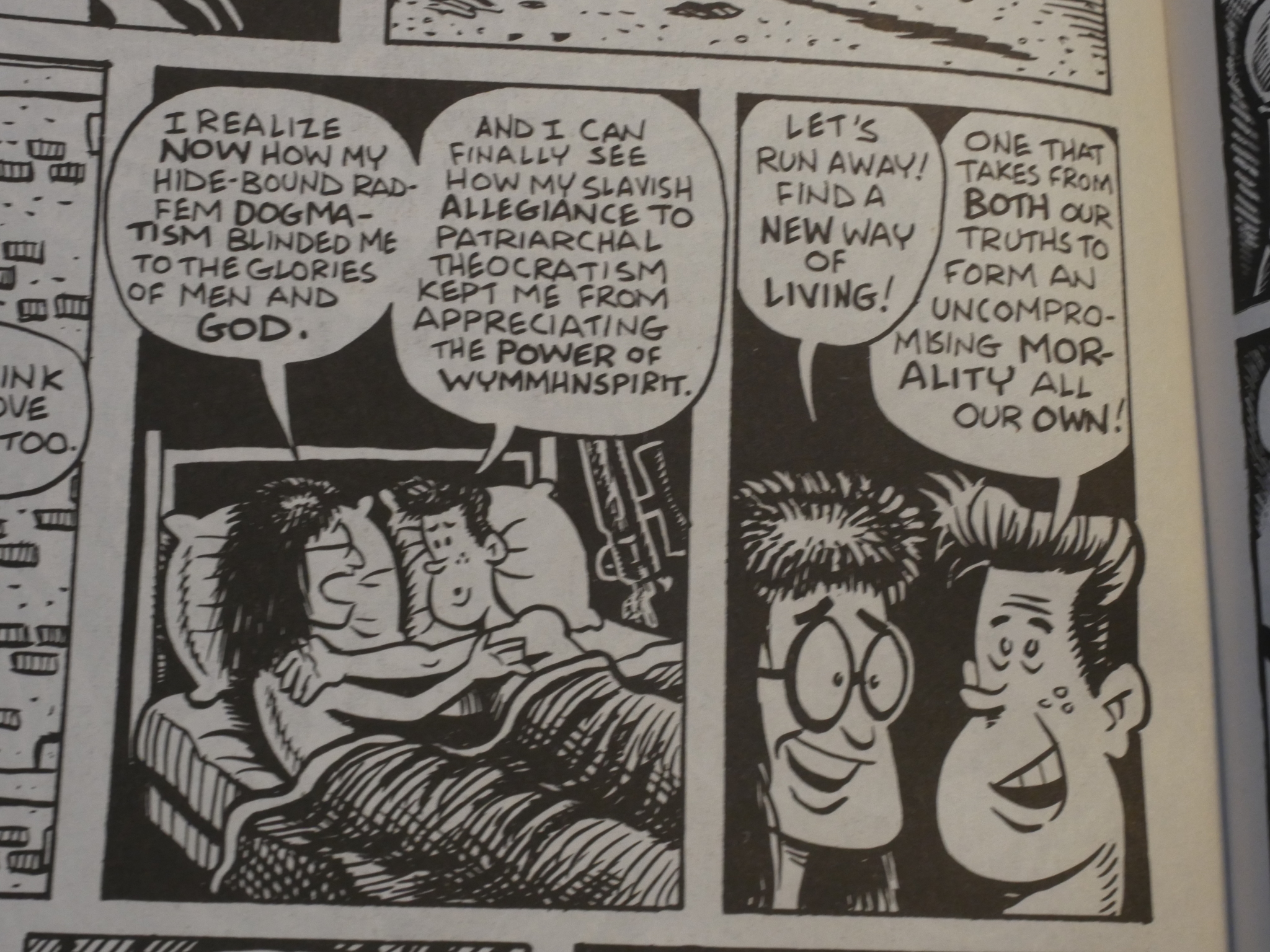 See? I think he tries to offend as many people as possible. 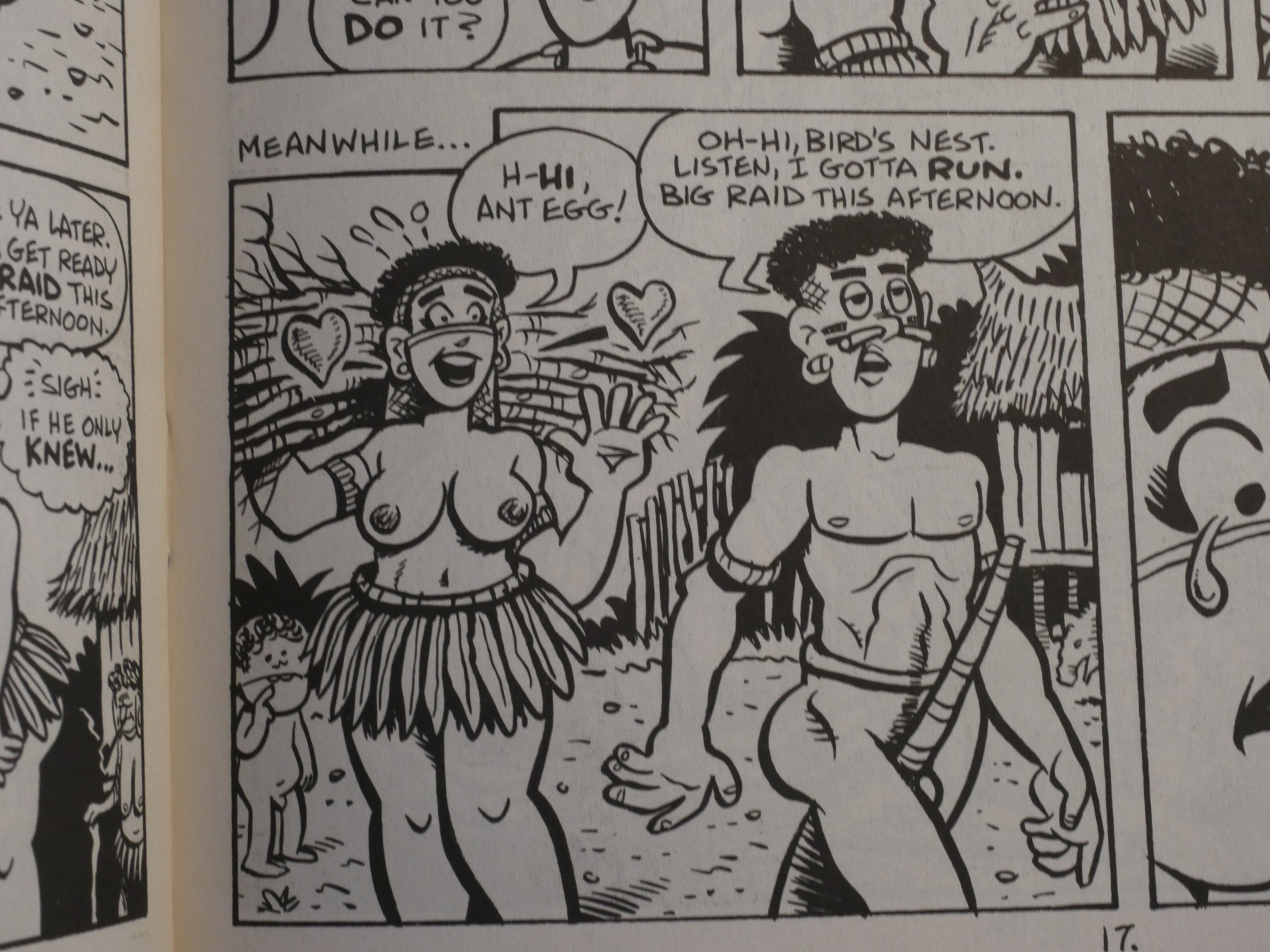 A parody of Archie (as a South American native tribe), for instance, has the potential to piss off most people, I should think…

And here’s his take on Don’t Ask Don’t Tell. After this soldier has been raped by the unit sissy: 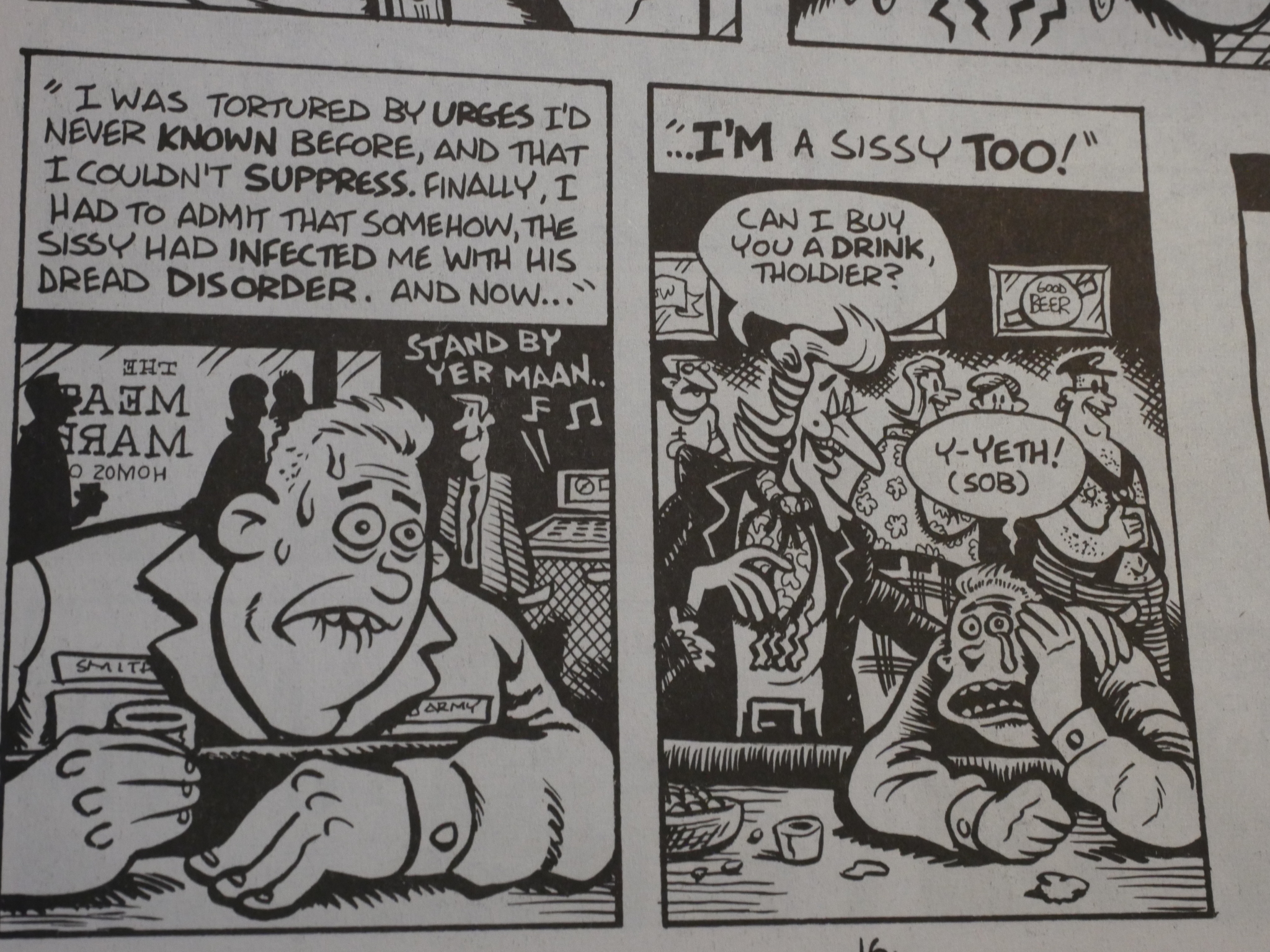 I think that Laban is trying to channel the spirit of late-60s underground comix, and I think he’s pretty successful. The artwork is satisfyingly goofy and everything just seems off the curb. 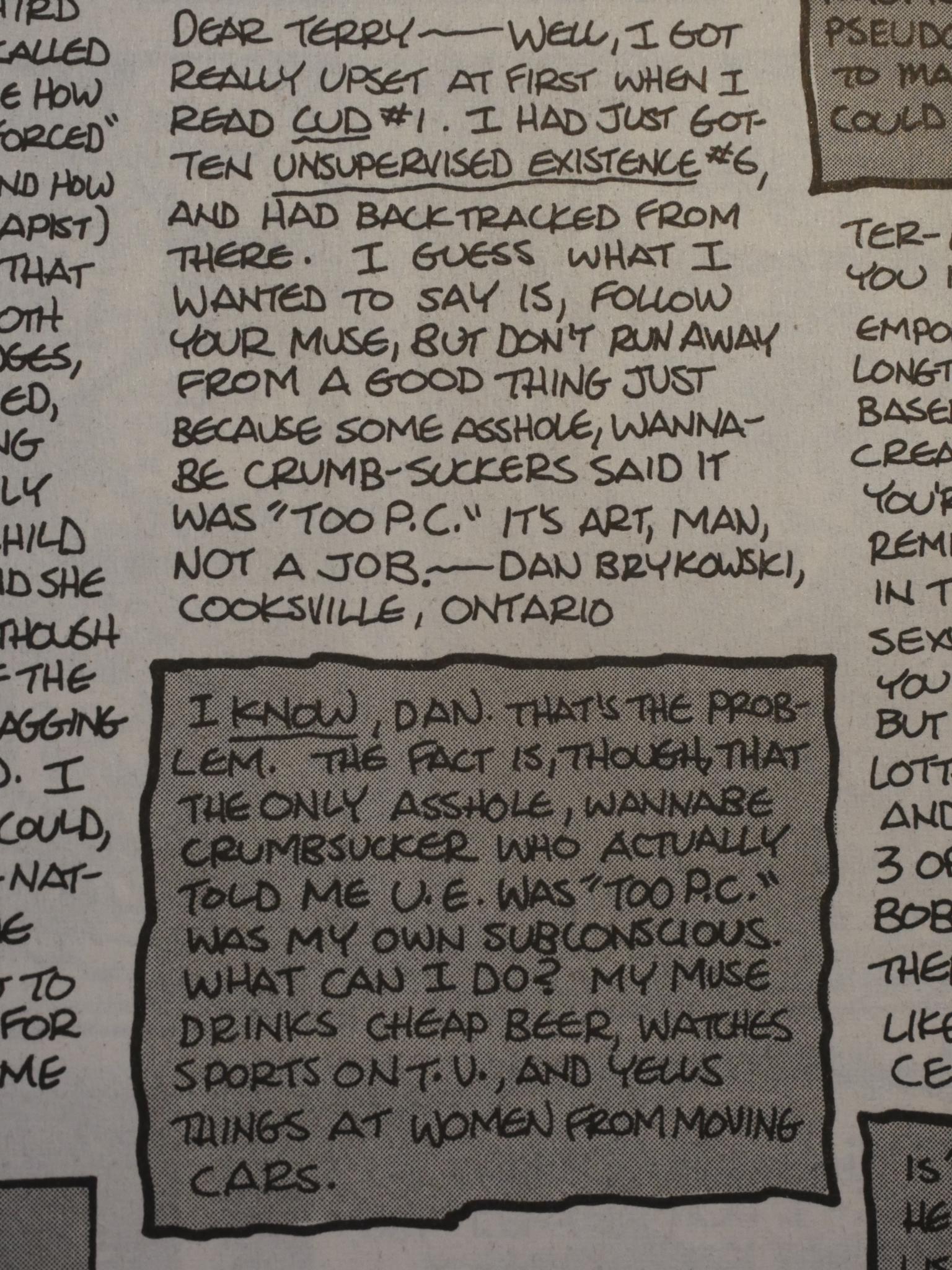 A reader questions this turn of events. 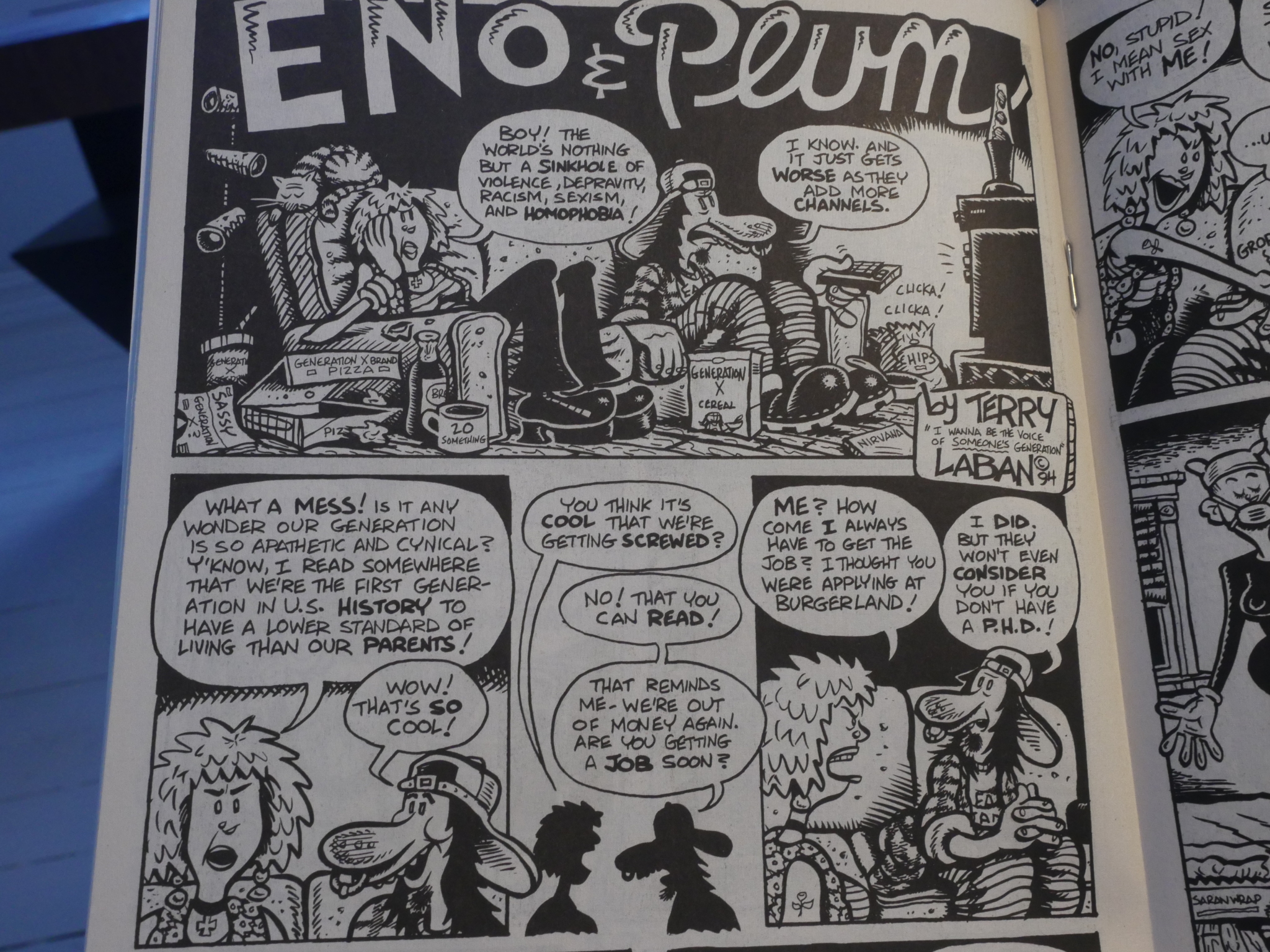 And I think Laban pulls way back in the final issues. He introduces a new slacker couple (who would go on to become the stars of his next comic book series). (Well, they’re slacker parodies, at least in this incarnation.) 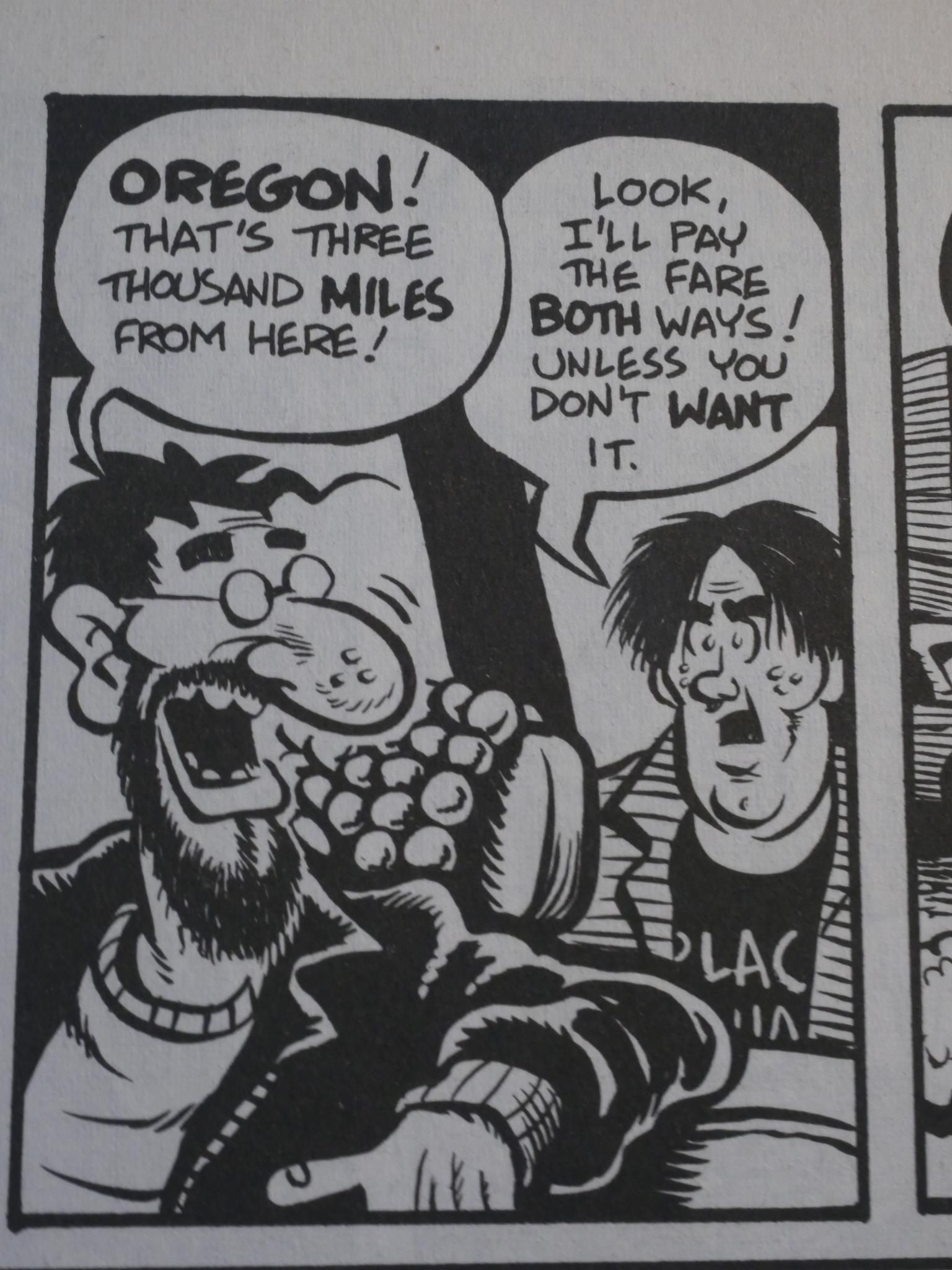 In addition, we get the conclusion to the Bob Cudd saga (not a particularly satisfying one, though)…

Oh, that panel up there isn’t the ending, but I thought it was kinda fun that Laban brought back Danny the cab driver (from Unsupervised Existence). 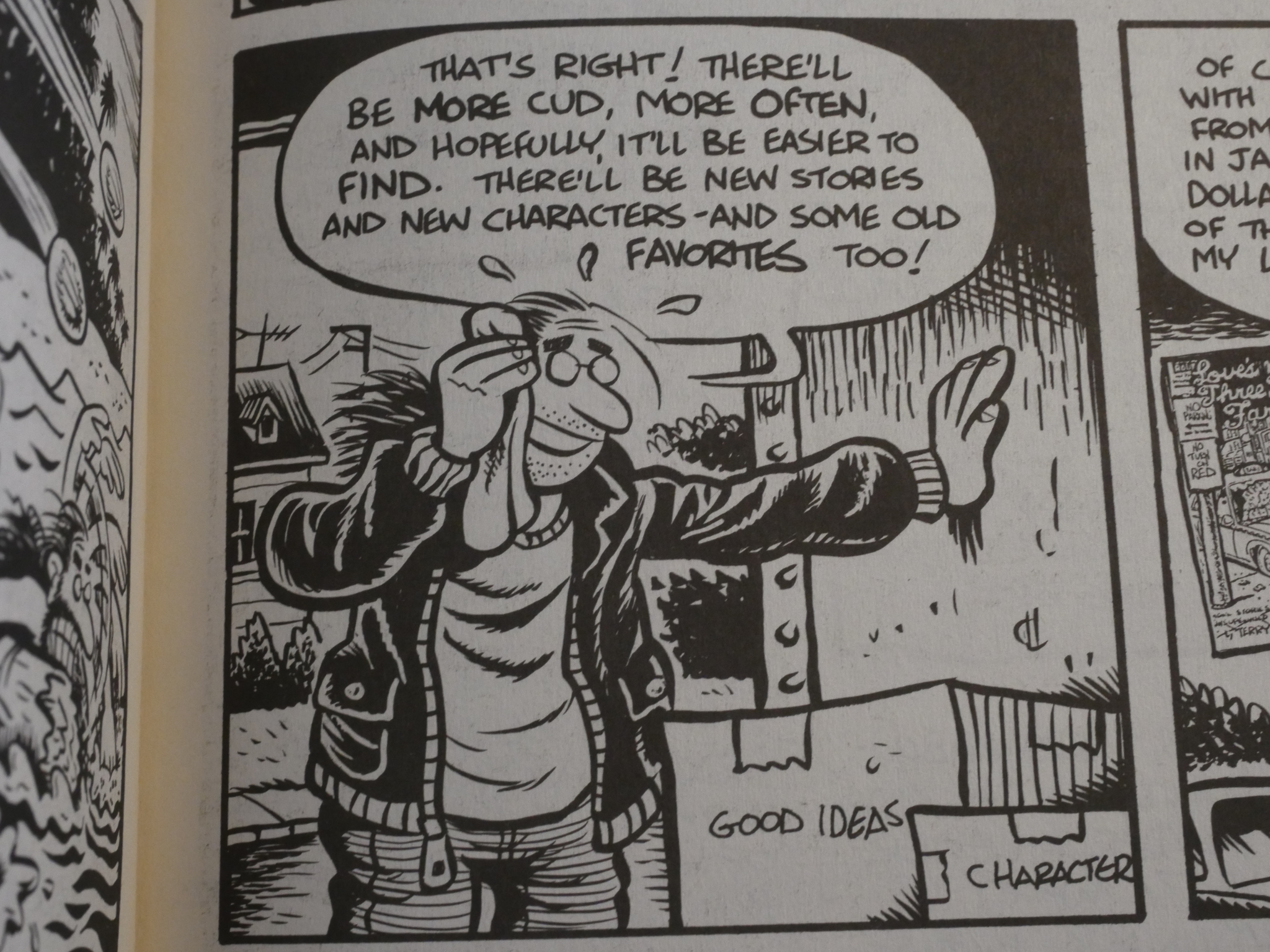 But then Cud was over. Laban would return with the confusingly titled Cud Comics (from Dark Horse) a few months later, and it was way, way less rude than Cud, if I remember correctly. It ran for eight issues before being cancelled, and then Laban co-created a daily newspaper strip for a long time, I think (yup, Edge City), which I have not read.