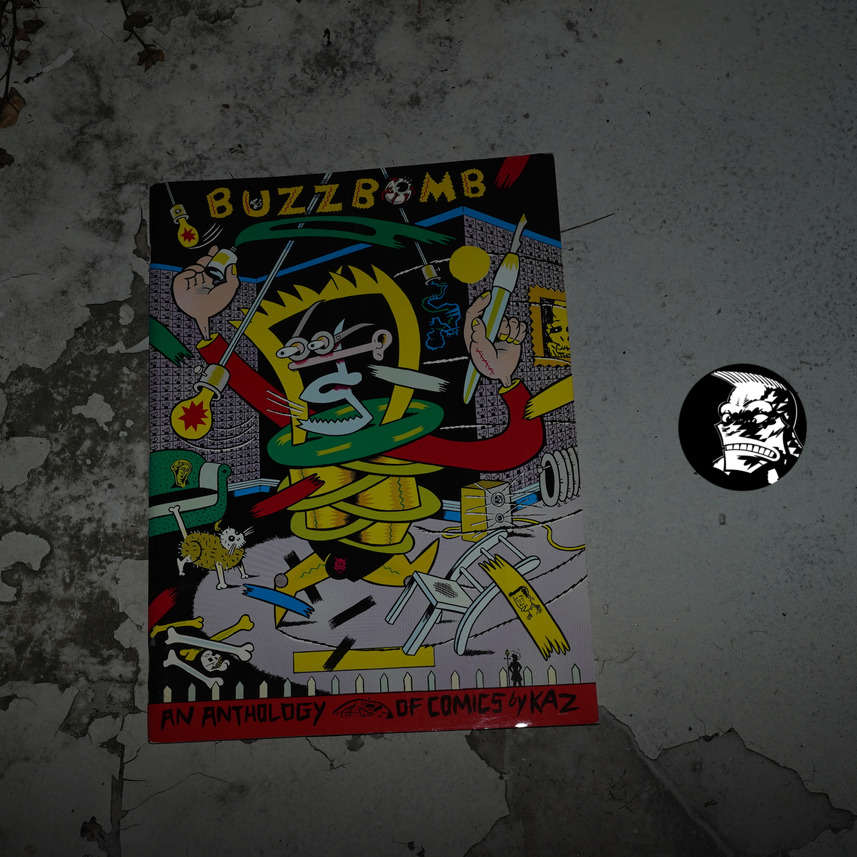 OK, here’s my deepest, darkest secret: I’m not really much of a Kaz fan. So I haven’t read this book since it was published, and I pretty much forgot that it existed — otherwise I would have covered it in the Fantagraphics blog series.

So: This is a big (Raw-sized) saddle-stitched collection of Kaz strips published by Fantagraphics. 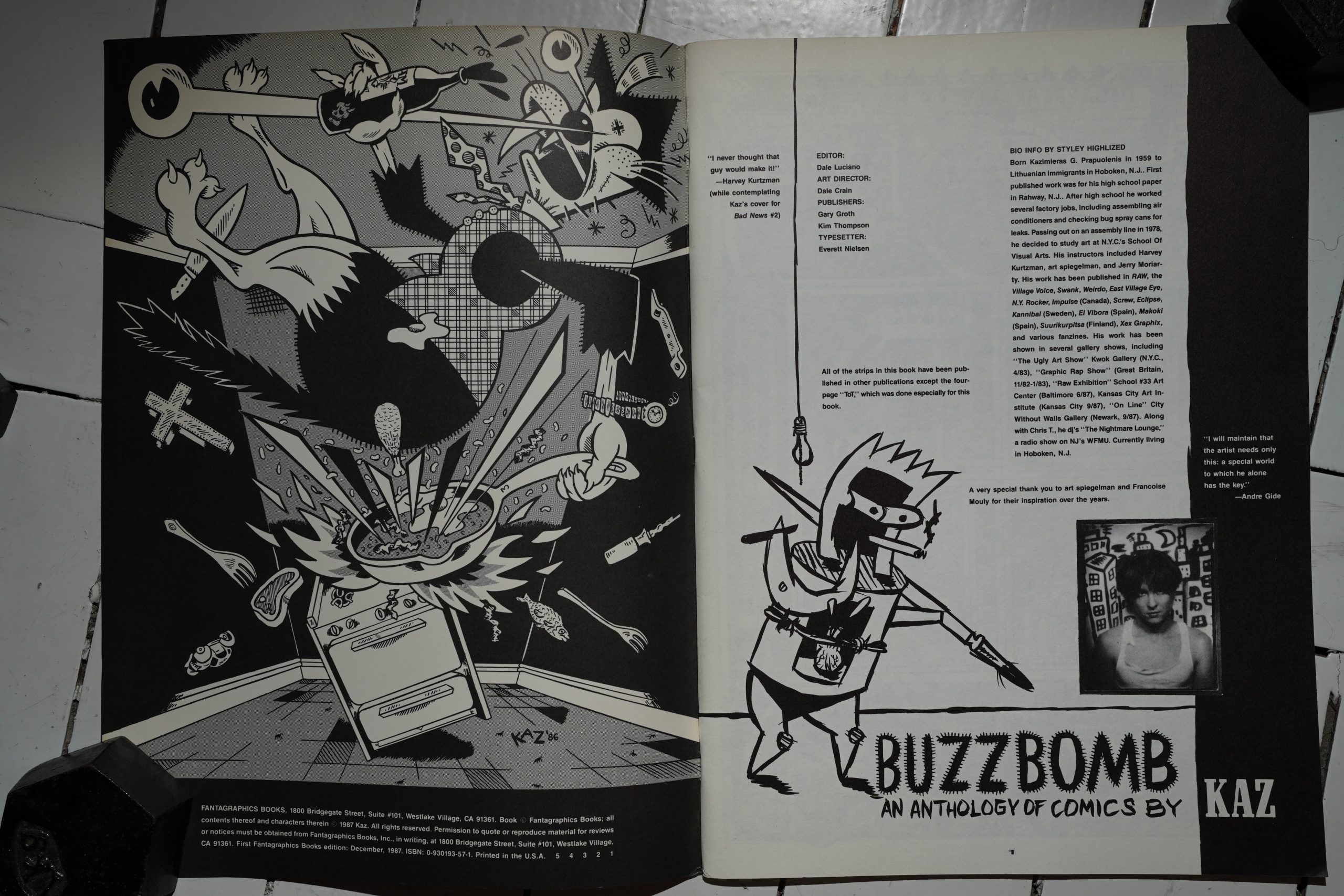 The designer seems to be going after the Raw/punk/post-modern design aesthetic, but… kinda doesn’t get there at all? Wrong font and haphazard placement of the elements. Even the cover stock (very shiny and thick) just feels off.

On the other hand, Kaz looks exactly like you’d imagine. 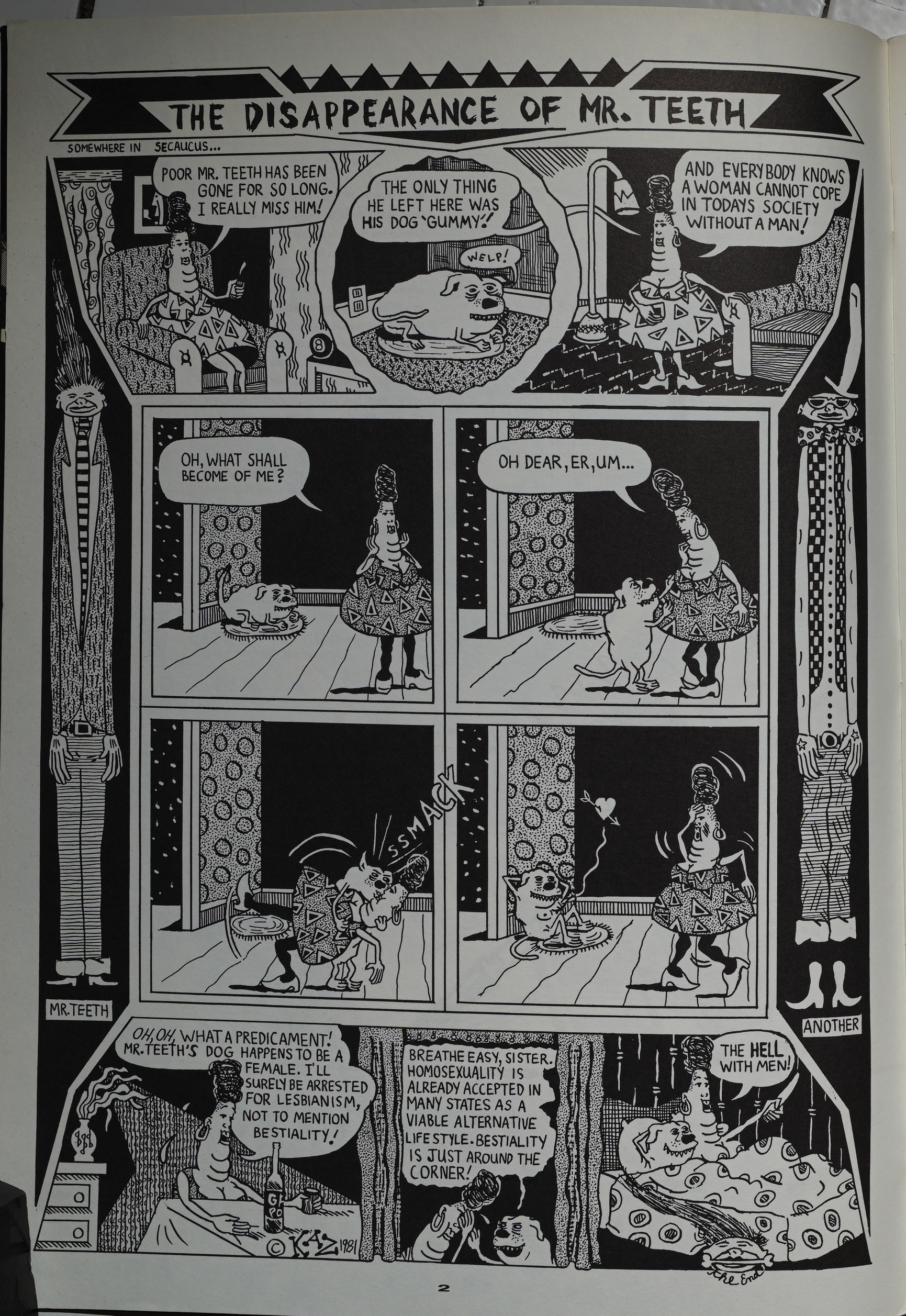 Almost all if this is reprinted from various sources, but the sources aren’t specified and comics.org isn’t very helpful, either.

Raw reprinted the first three issues of the magazine as Read Yourself Raw around this time, and the Kaz strip(s) from those issues were left out from Read Yourself Raw. Perhaps because they’d just been reprinted, or… other reasons.

I do often like Kaz’ design sense (especially here, where he’s basically cribbed everything from Mark Beyer), and I like the stark graphic qualities in his rendering, but these are basically traditional underground gags in new dressing. 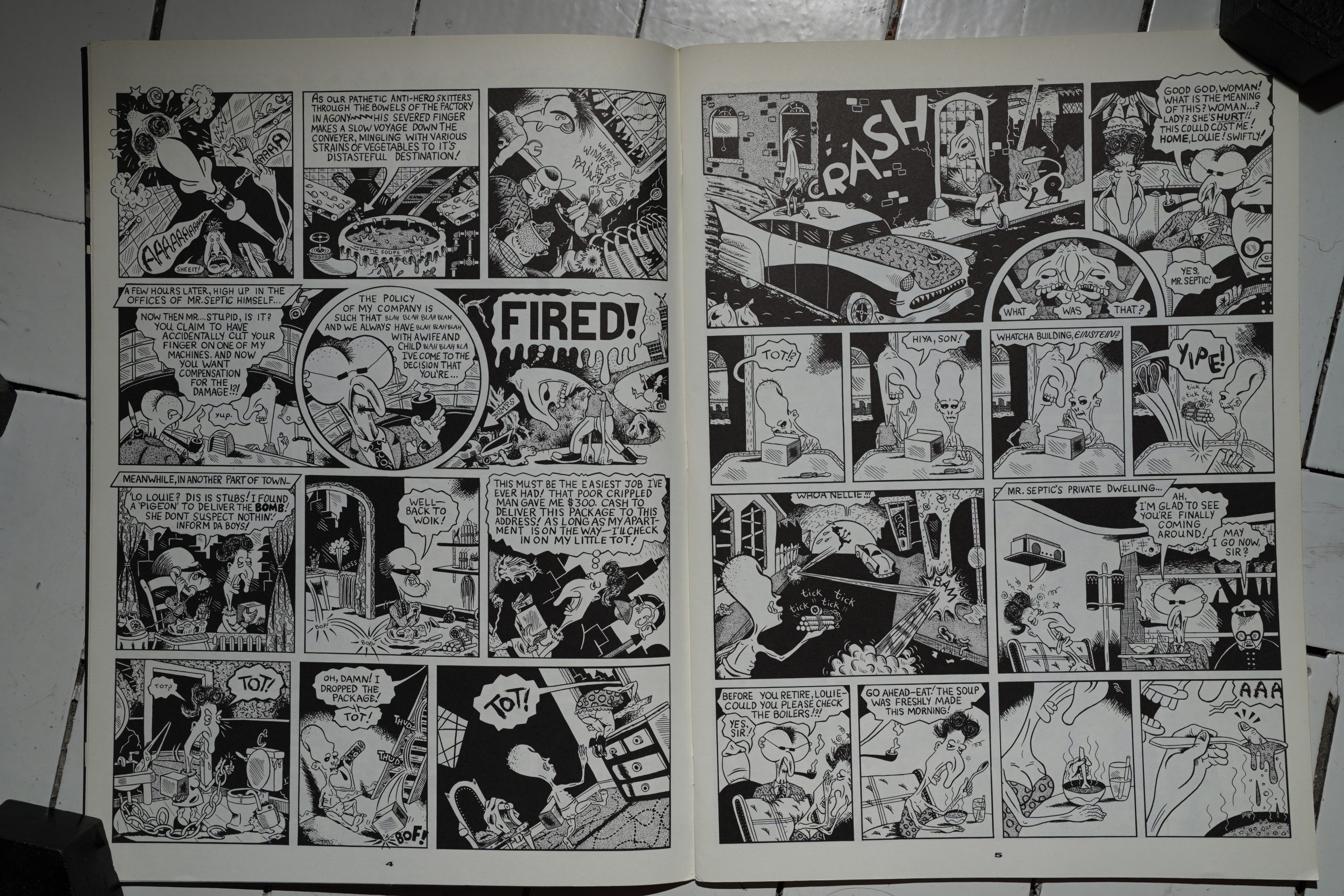 The vast majority of these pieces are strongly narrative, but the stories are pretty shaggy and not very well-though-out. There doesn’t seem to be any subtext here: These stories are as shallow as they come. 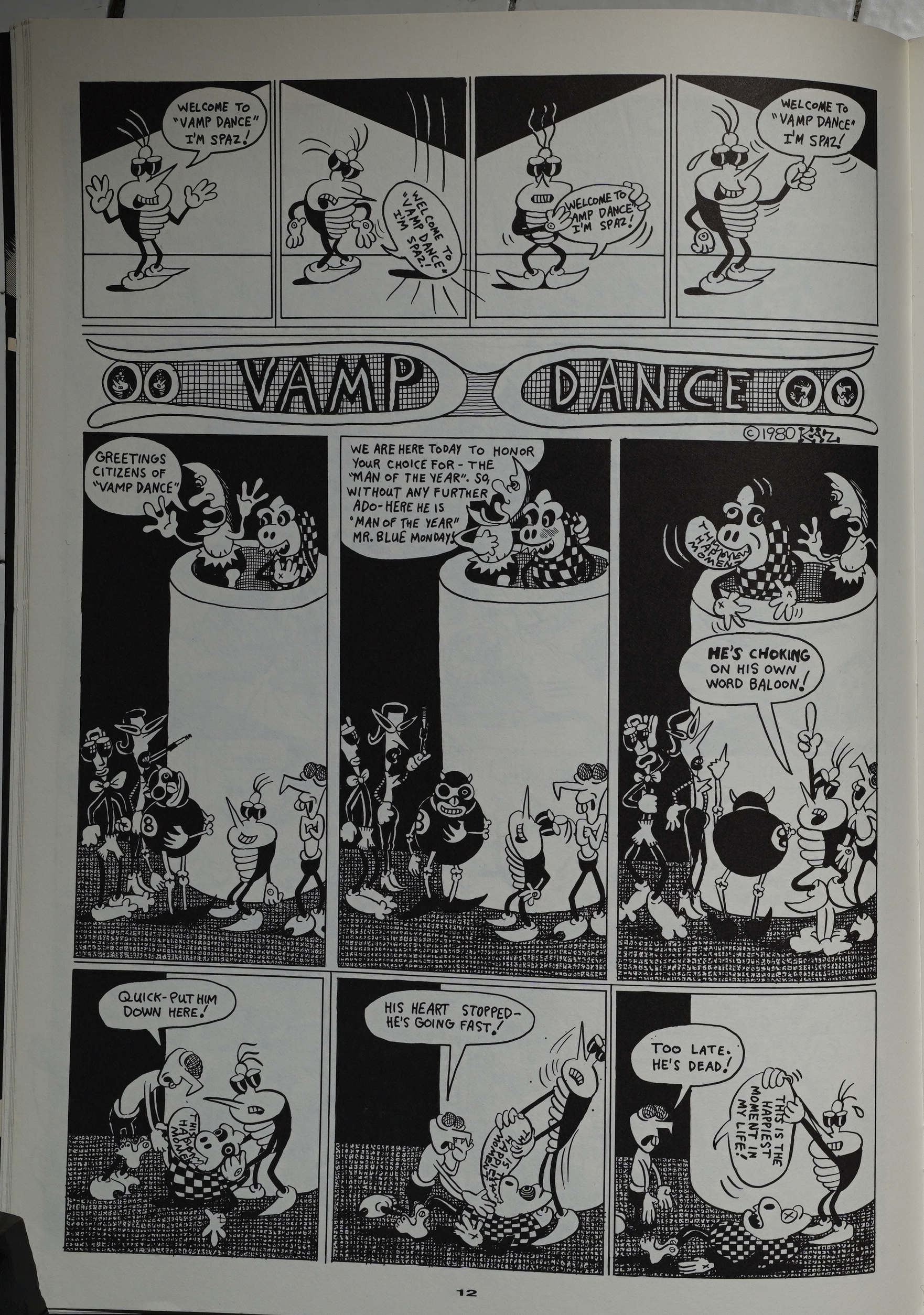 He was a student at the SVA at the time, which explains these exercises in exploring form, but he’s going over territory that’s pretty well-covered. 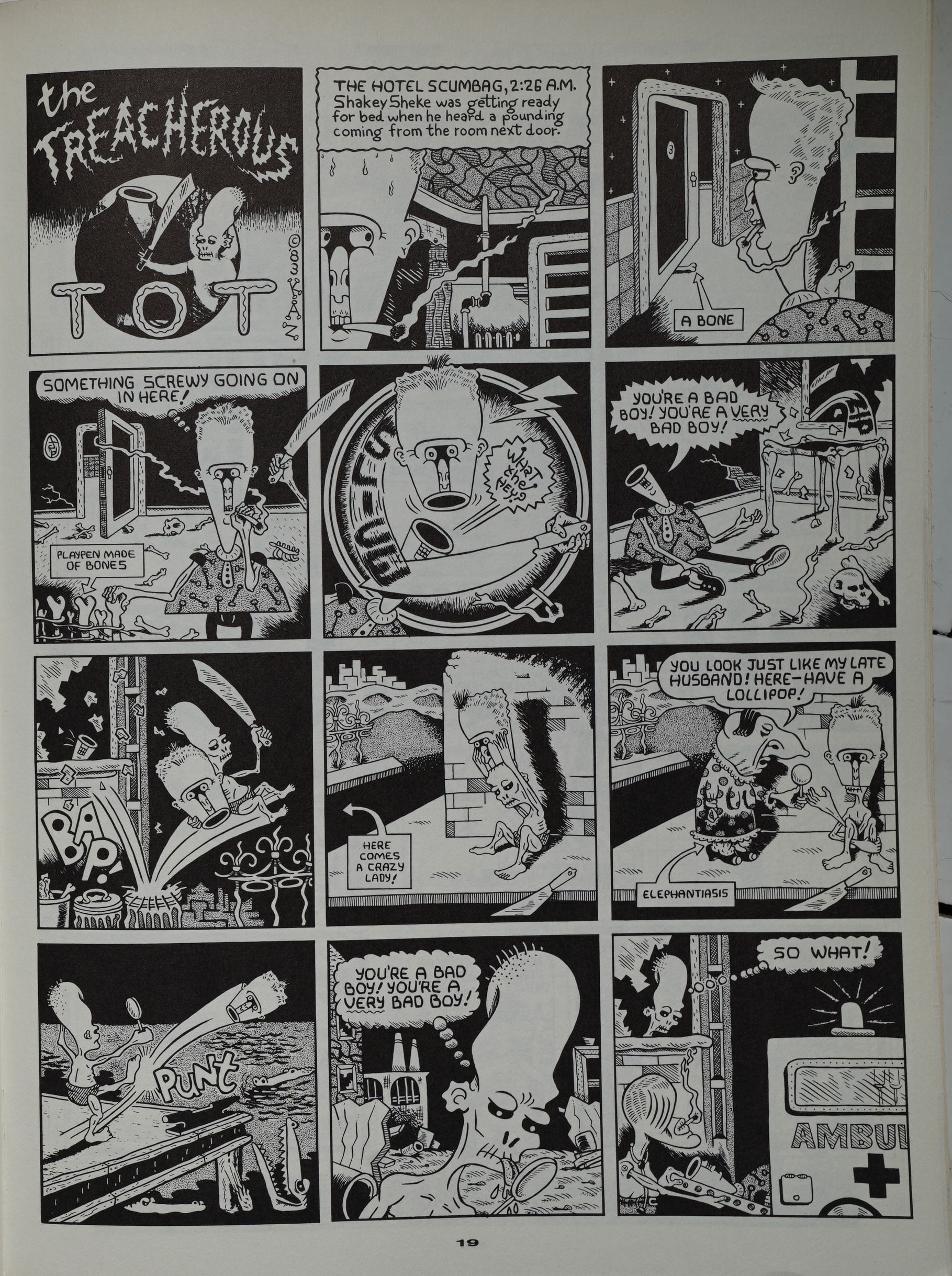 Buzzbomb has some Of the artist’s earliest and
least accomplished work, but also some of his best,
like the expressionistic punk noir Tot,” and the
volume ‘s large-scale format and appropriately pulpy
paper stock show the better artwork to dramatic
advan tage.
The fledgling strips that Kaz produced in the
early 1980s are mostly single-page gag strips of the
sick humor variety and the artwork in them is rather
amateurish. Their saving grace is Kais creative page
layout, Often inspired by classic newspaper strips.
But even in these early pieces there is a clear the-
matic consistency With his later work; there is the
same concern with overtly “dumb” humor, the ma-
cabre (one early page irreverently illustrates frag-
ments of verse taken from old gravestone inscrip-
lions). and With the meaning or meaninglessness Of
life. Like many other alternative cartoonists who
emerged in the 1980s, Kaz’s work is also grounded
stories take place in the industrial swamplands of
New Jersey were the sky is eternally black above a
landscape dominated by bleak factories and chemi-
cal plancs and littered with trash and toxic wastes.
The plots are absurd, surreal things dripping
with attitude and film noiratmosphere. In one epi-
sode Tot is brainwashed and conditioned by an
ambitious priest tostab the local bishop at the sound
Of the theme music from •l Dream Of Jeannie.”

TWO PUBLISHERS DELAYED
PRINTERS REJECT BOOKS
Two books from different
publishers—Buzzbomb. by Kaz, from
Fantagraphics, and Peter Hsu’s self-
published Hellrazor Graphic Novel—
were delayed by printers who agreed
to print the books, then refused
because of objections to the books’
content.

Buzzbomb, a graphic album Of work
by Kaz (Kazimieras G. Prapuolenis),
was already several months late when
it was sent to Griffin Printing early this
year. The Glendale, California firm’s
refusal to print the book delayed
publication at least another five weeks,
according to Fantagraphics Publisher
Gary Groth.
Groth said he sent the tmks to Grif-
fin’s sales representative, who told
him that the book had approved,
whereupn Fantagraphics Sent an
advance deposit.
About four days later, a sales rep
from Griffin called Groth and told him
that they uould not print the bCX)k. The
Griffin sales rep said that the company
does a lot of business with publishers
Of religious material. and it was feared
that printing Buzzbomb might jeopar-
dize those accounts.
In a subsequent phone conversation
with Griffin’s president. Groth said,
the president refused to confirm the
sales rep’s story, but did say that he
personally found the book immoral.
Groth said Fantagraphics• check was
returned. and a new printer was found,
although at a higher price than
Griffin’s.

You can still pick up copies of Buzzbomb pretty cheaply on ebay.