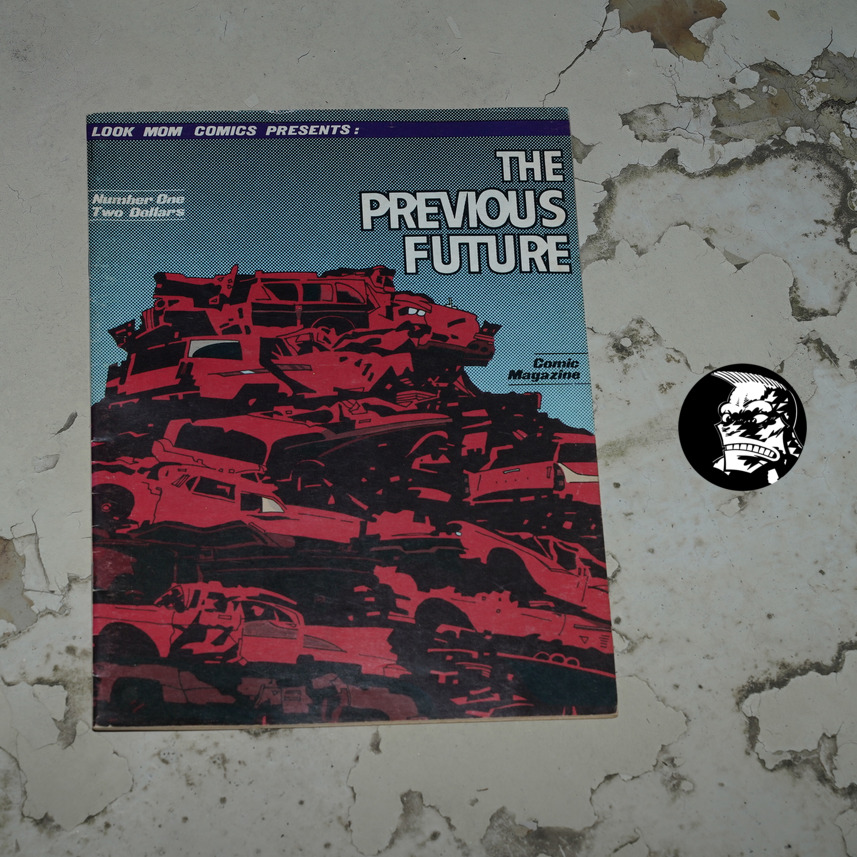 This is published by Look Mom, Comics — the same people who published Psycho Comics. So I wasn’t going to cover this magazine in this blog series, but I had already bought it, and the cover looks pretty intriguing… so let’s give it a go. 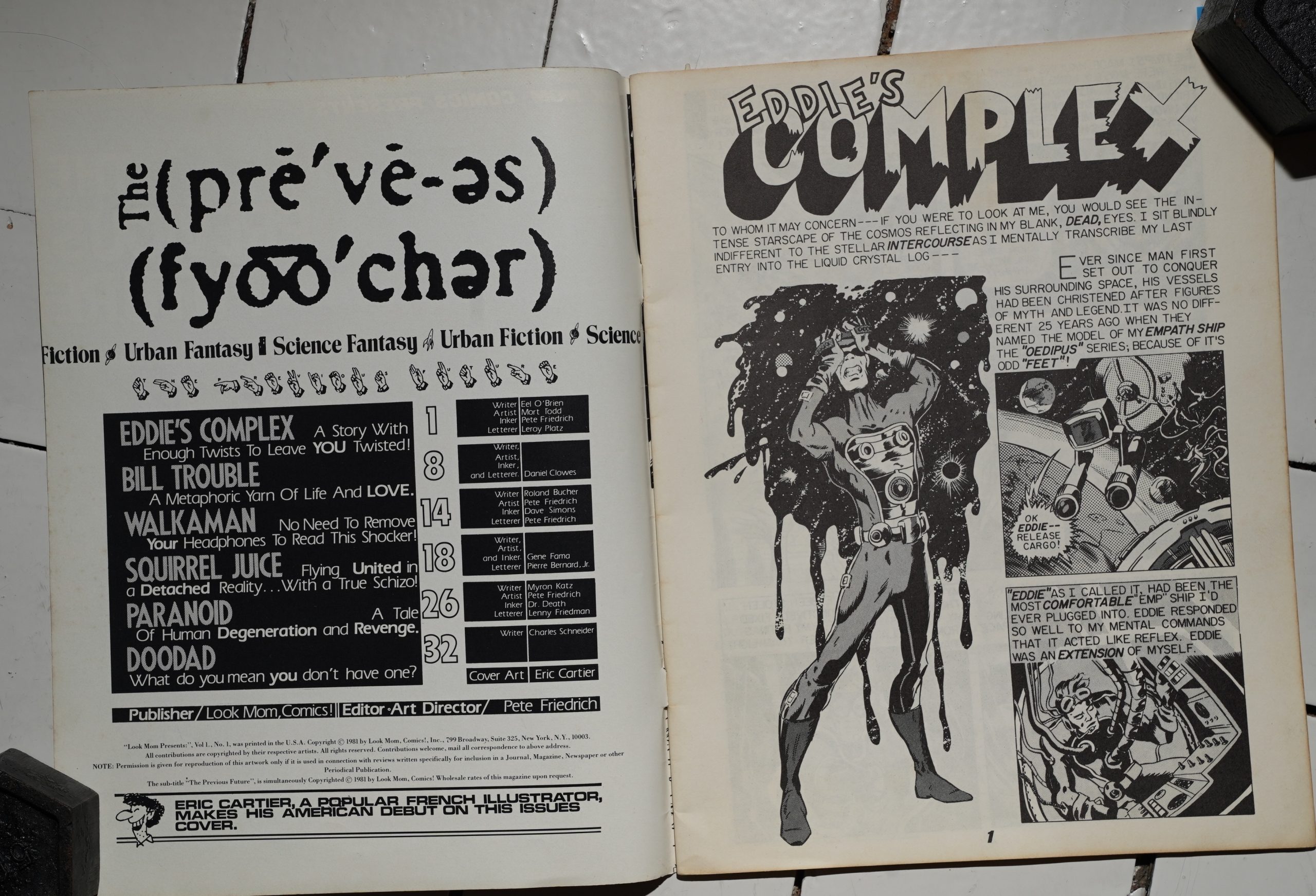 Oh, well: It’s more of the same amateurish stuff, except for the cover, which is done by a French guy called Eric Cartier, which kinda sounds like a fake name? But isn’t. 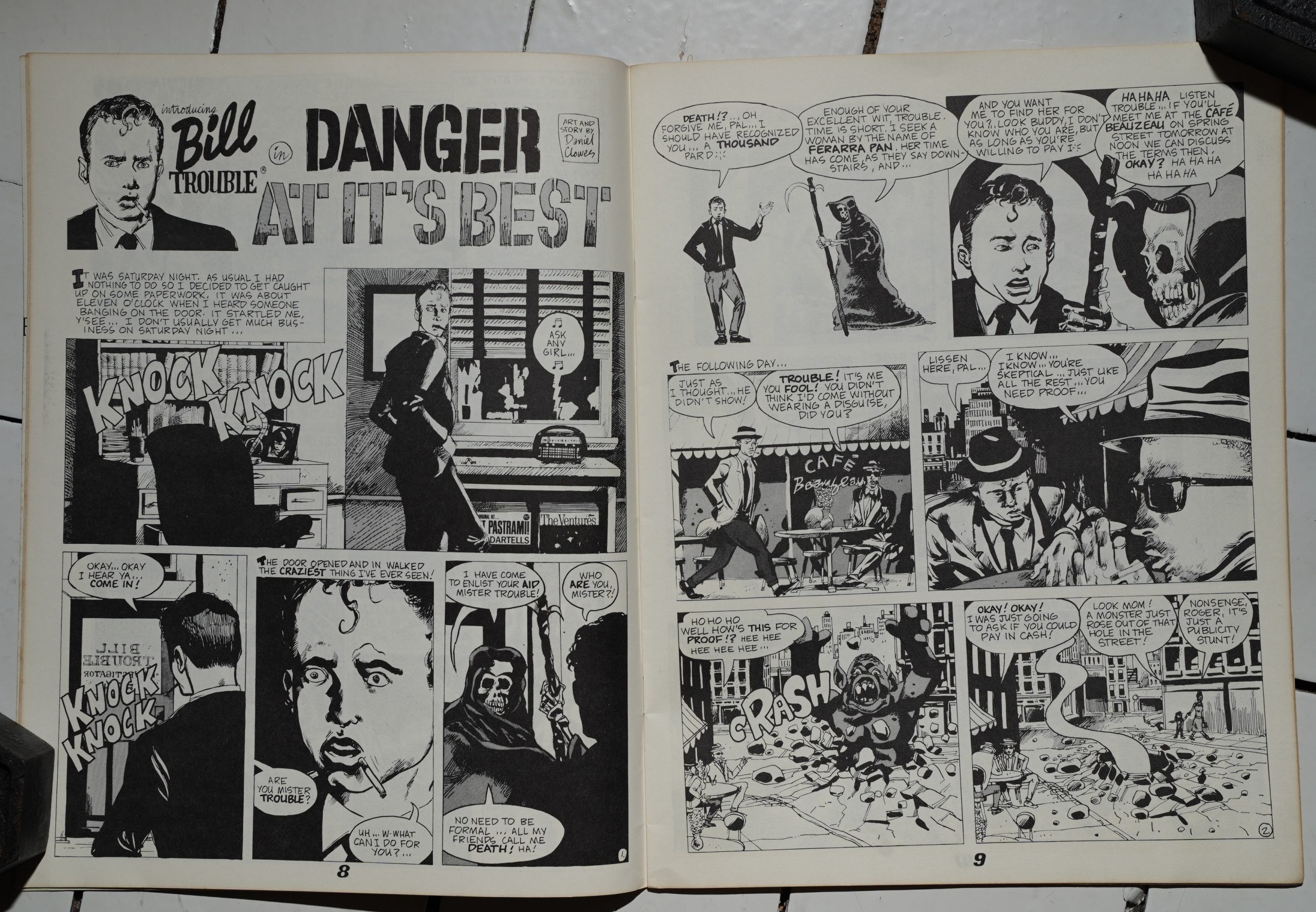 As with Psycho Comics, this isn’t so much “adjacent” to the comics I’m covering in this blog as stuff presumably by teenagers in New York. Here’s Daniel Clowes — he’s perfected his signature, but the artwork’s pretty rough. But it’s a somewhat amusing story. 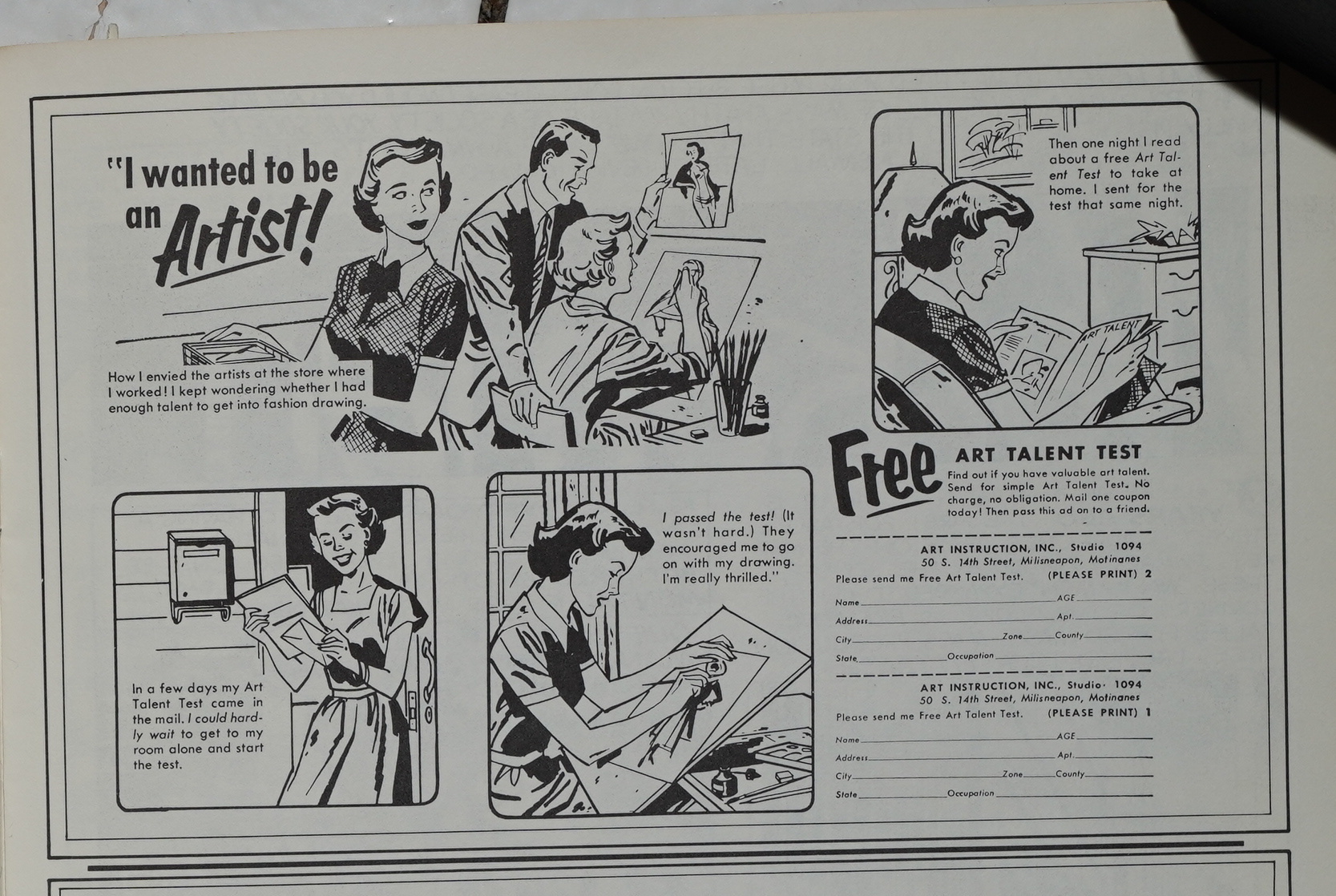 Is that a parody of one of these scam ads, or is it one of those scam ads? 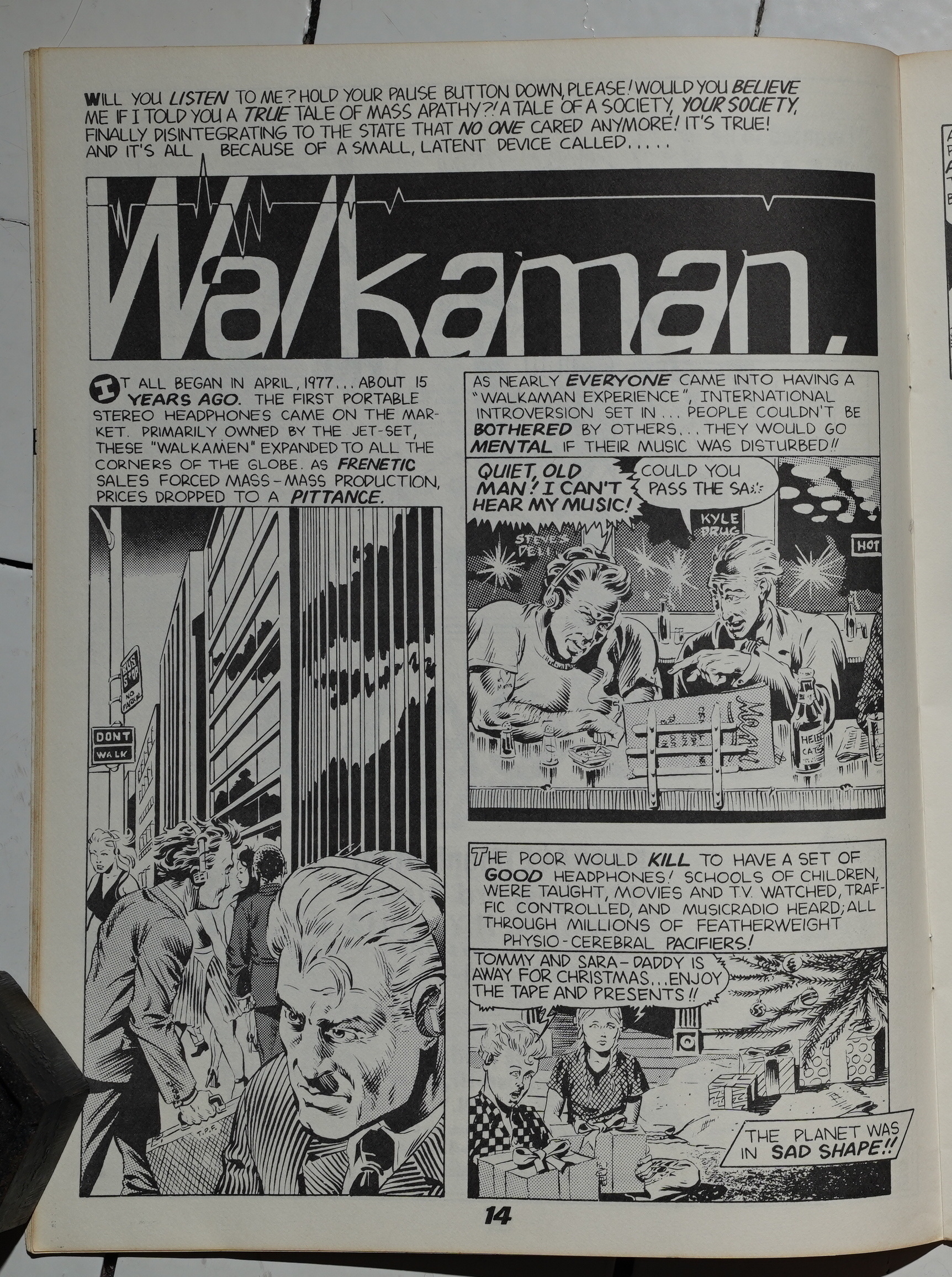 The most timely story here is the one about the dangers of using that new-fangled “Walkman” technology. 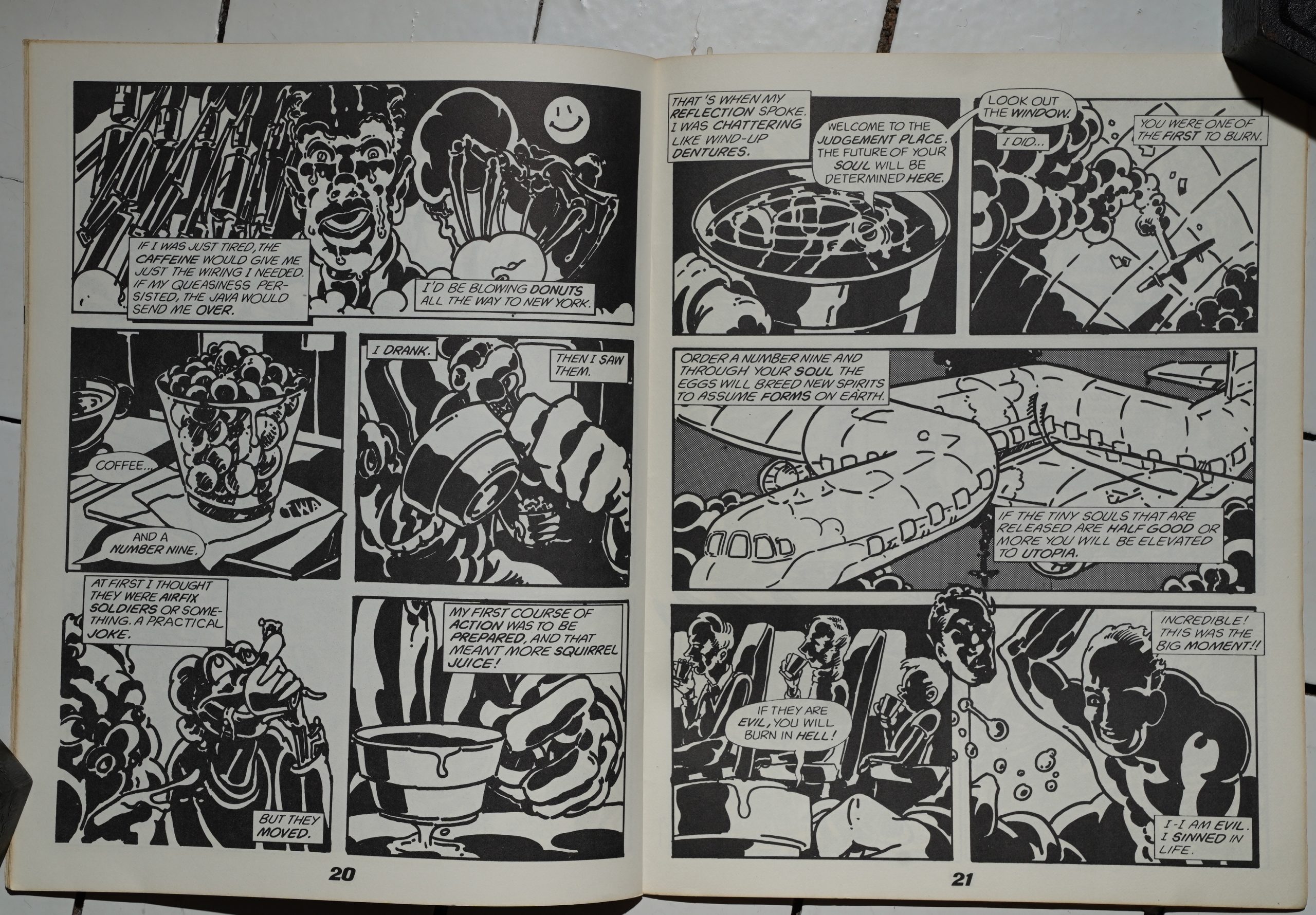 The most successful story here is this one by Gene Fama. I mean, it’s an O. Henry story, but it’s pretty inspired. 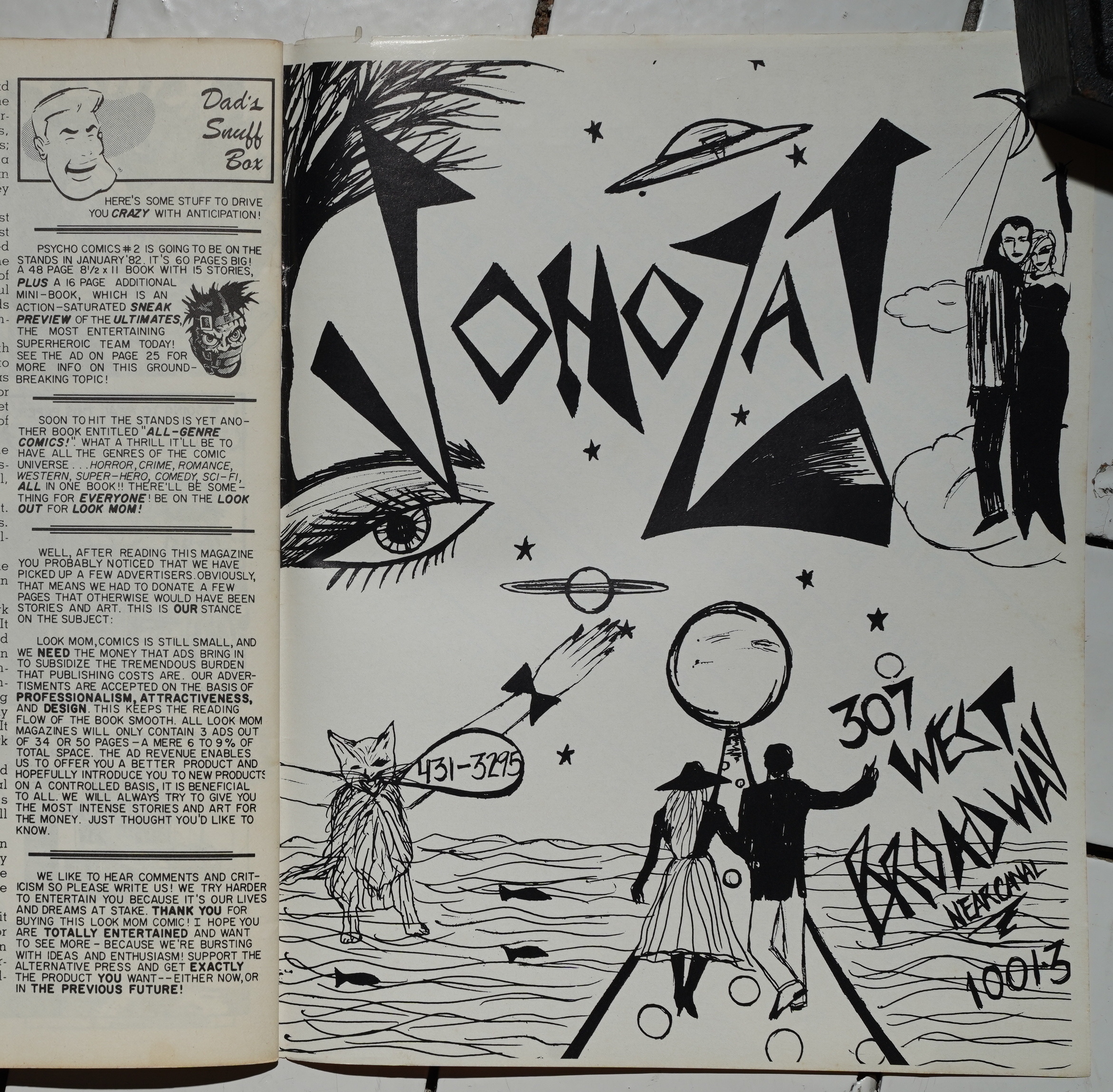 The editor explains that, yes, they’re doing ads, but only if they’re of the same professionalism and attractiveness as the contents of the book.

(I’m not sure whether that’s a joke or not? It seems too on the nose for it not to be a joke?)

The American version of Axiom is not really a store, but a stall located in the back of Sohozat, 307 West Broadway, a New Wave emporium where one can buy thrift-shop-grade smoking jackets or old monster magazines.

From the same EC-inspired band of writers
and artists that released Psycho Cornics
last year (see the Journal #66) now comes
the first issue of Look Mom Comics pre-
sents, subtitled The Previous Future. It’s
a loose-knit assemblage of pieces coming
under the various headings of “Urban Fan-
‘tasy,” “Science Fantasy,” “Urban Fiction”
and “Science Fiction.” (The Look Mom
staff is infatuated with genre designations.
Promised for future release are such special
“theme” issues as True Psycho Romances,
psycho Crime Stories, and Psycho Animals On
parade; also, Look Mom Comics Presents #2
will have as its theme, “All-Genre Comics
…all the genres comics have been through
and then some! Editor/ Art Director Pete
Friedrich has a taste for the bizarre and
the apocalyptic, as evidenced by the fancy
title which, truth be told, doesn’t accurate-
ly mirror the various moods Or thematic
preoccupations of the pieces. (I’m not
certain whac title would.) Most of the
contributions are short, pungent tales of
the macabre that build toward an “unex-
pected,” twist ending; there is an attempt
in each story to . end with @ touch of
irony.
Because I had such ambivalent feelings
about psycho Comics I approached The
Previous Future with particular interest,
hoping to glean more of creators’
motives and aspirations as they ventured
into these new realms (“Urban Fantasy,
“Science Fantasy,” etc.); I also hoped for
more evidence of solid, sustained achieve.
ment than was apparent in Psycho Comics
Alas, the results are mixed—promising
ideas only half-realized in the execution.
The material ranges from Eel O’Brien’s
frenzied, Lurid writing and Mort Todd’s
overwrought art in “Eddie’s
space jockey is transported back through
time by his “empath ship,” the Oedipus,
and fathers himself—to the naturalistic,
sordid, “Paranoid,” a tale of a “prize panty-
waist” who, tormented at every turn
throughout a dismal life, comes to a miser-
able end in a violent subway incident. This
latter piece could easily have appeared in
Friedrich’s “ShockSubway Stories,” in
Psycho ComicS.) A lot of energetic, promis-
ing talent is expended on material that isn’t
nearly so daring, imaginative or engrossing
as Friedrich and company may suppose.
Here’s something, though. The Belgian
artist Gene Fama contributes the seven-
page “Squirrel Juice,” a nightmare fantasy
of a man who confronts his “davof reckon-
ing” aboard an airliner. He is offered the
alternatives of Hell or reincarnation,
chooses reincarnation, becomes a fly, and
is subsequently dispatched from this Earth
in a most unpleasant manner by the foot of
a passenger strolling to the bathroom.
Fama’s violent black-and-white imagery is
disturbing and grotesque, involving distor-
tion and metamorphosis. The piece is an
authentic slice of dementia; its fear and
despair are not easily dismissed. It’s bizarre,
grotesque stuff, probably an apt indication
of the kind of overt weirdness that
Friedrich is looking to capture in the book.
There’s an amusing trifle from Daniel
Clowes that features private eye Bill Trou-
ble,” in a story that has the baby-faced
hero searching out the whereabouts of a
girl for Death, then challenging Death to a
game of checkers for the girl’s life. (Natural-
ly, Death loses, and says, “You must have
cheated!”) It’s a bit humdrum in the actual
telling—Clowes devotes two pages to the
least interesting aspect of the narrative
—and the checker game with Death is a bit
anticlimactic. There’s a funny throwaway
bit early on in which Death, asked to
validate his identity, casually summons up
a creature that demolishes an entire city
street. (It feels like an homage to Steve
Ditko and Marvel horror comics.) Light-
weight but diverting.

The French illustratOr Eric Cartier con-
tributes an extremely handsome color
cover depicting an automobile graveyard,
countless wrecks piled atop one another in
a lumbering pyramid of junk. I trust I am
not alone in thinking this is an icon Of
that has lost much Of
its power through overuse. (A press release
from Look Mom Presents notes. “The cover
was a risk because it does nor your
usual Superhero or Woman with big T’s
and A’s.” This strikes me as an unwar-
ranted solicitation of approval—in essence,
seeking praise for Look Mom Presents’ virtue
in not doing something. Not is not
enough. )
The Look Mom crew is an enthusiastic,
spirited bunch, The Previous Future is
printed handsomely on very good quality
stock, and the anthology approach is
appealing. I wish the art work were more
skillfully executed and, more to the point,
the writing more effectively worked out
and sustained. On the plus side, there is an
NO superheroes or Women with
big Ts and As on the cover here,
folks, just wrecked cars.
obsessive, visionary fervor to the Fama
piece that redeems the surreal parable from
its more banal implications. And in
“Paranoid,” Friedrich and Michael Delle
Femine (“Dr. Death”) again exhibit their
fascination with aberrant, psychotic be-
havior. They have no wish to explore it,
but simply to document its more flam-
boyant, violent aspects. It is absorbing,
however, to see the results of their col-
laboration, even if it’s not fully satisfying
work,

One thought on “PX81: The Previous Future”