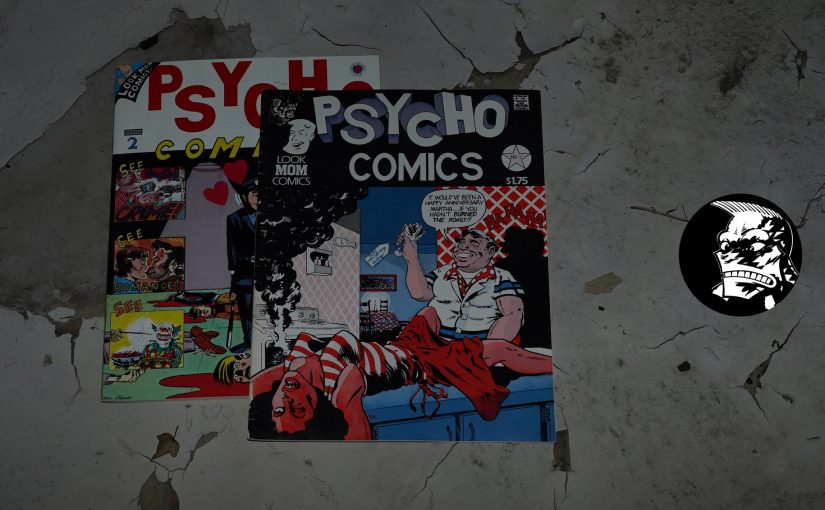 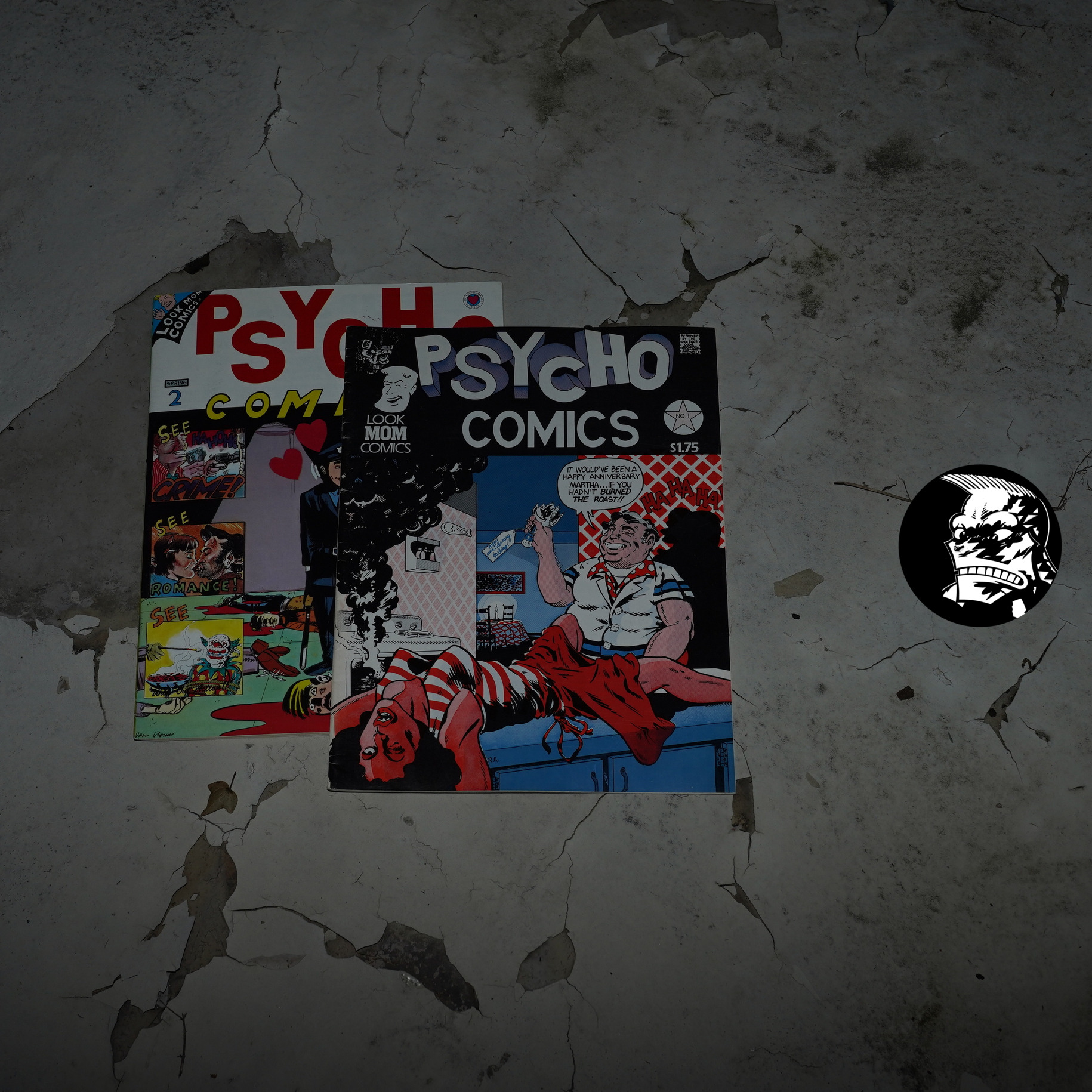 What’s this then? Surely this book doesn’t fit the theme of this blog series?

No, it doesn’t, but I’m including it for two reasons: It’s from New York in 1981, and, er, I kinda bought these by mistake recently.

It’s also a contrast to the other books in the series? Does that make sense? No? Tough.

This is edited by Daniel Clowes, who was attending the Pratt Institute:

Pratt Institute in Brooklyn, New York, where he earned a BFA in 1984.

I’m assuming Pratt wasn’t as arty as the SVA. 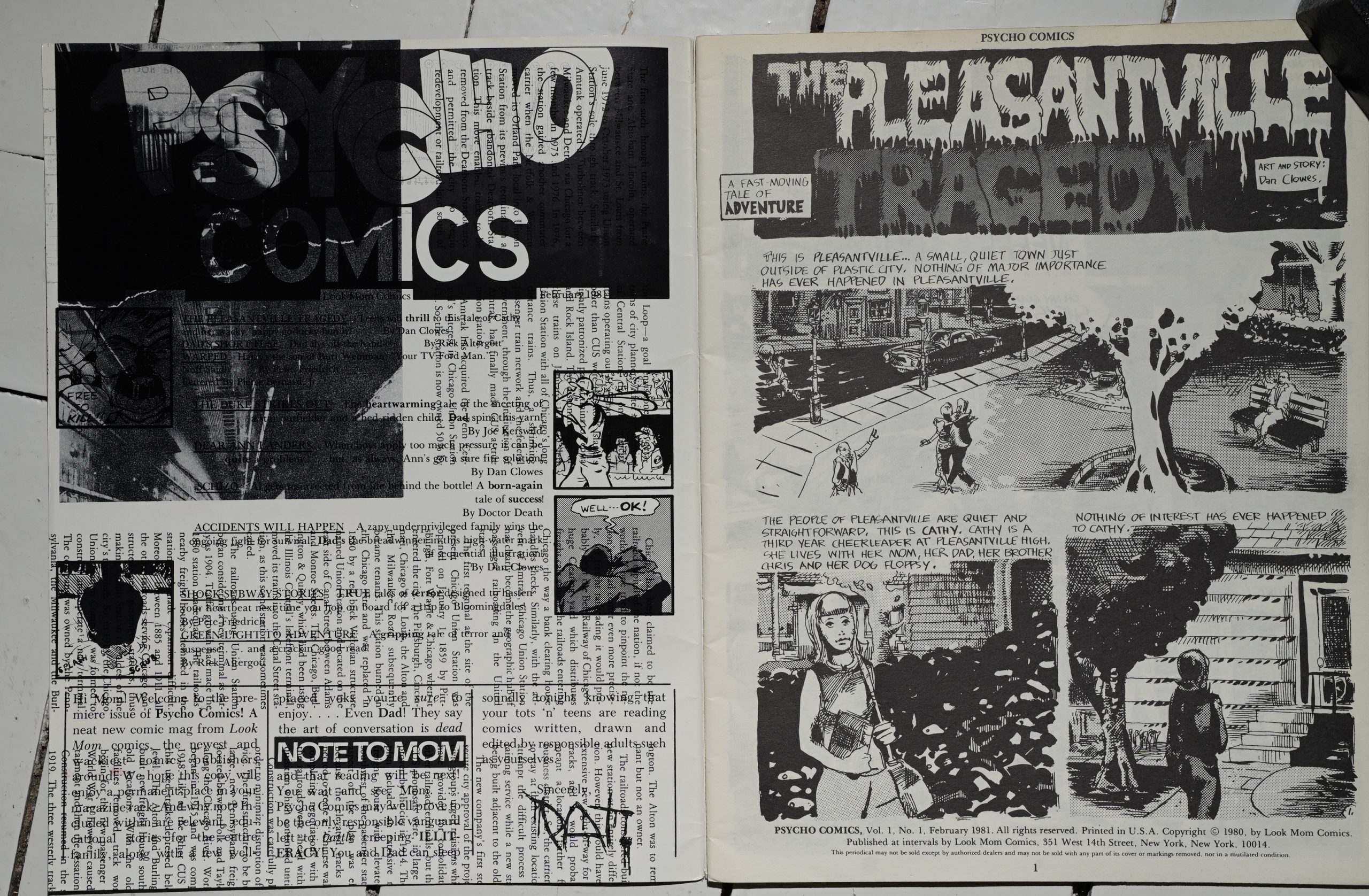 The inside front cover is kinda fun (it’s “psycho”), so I wondered whether this would have some sort of crossover appeal with the Raw crowd anyway… 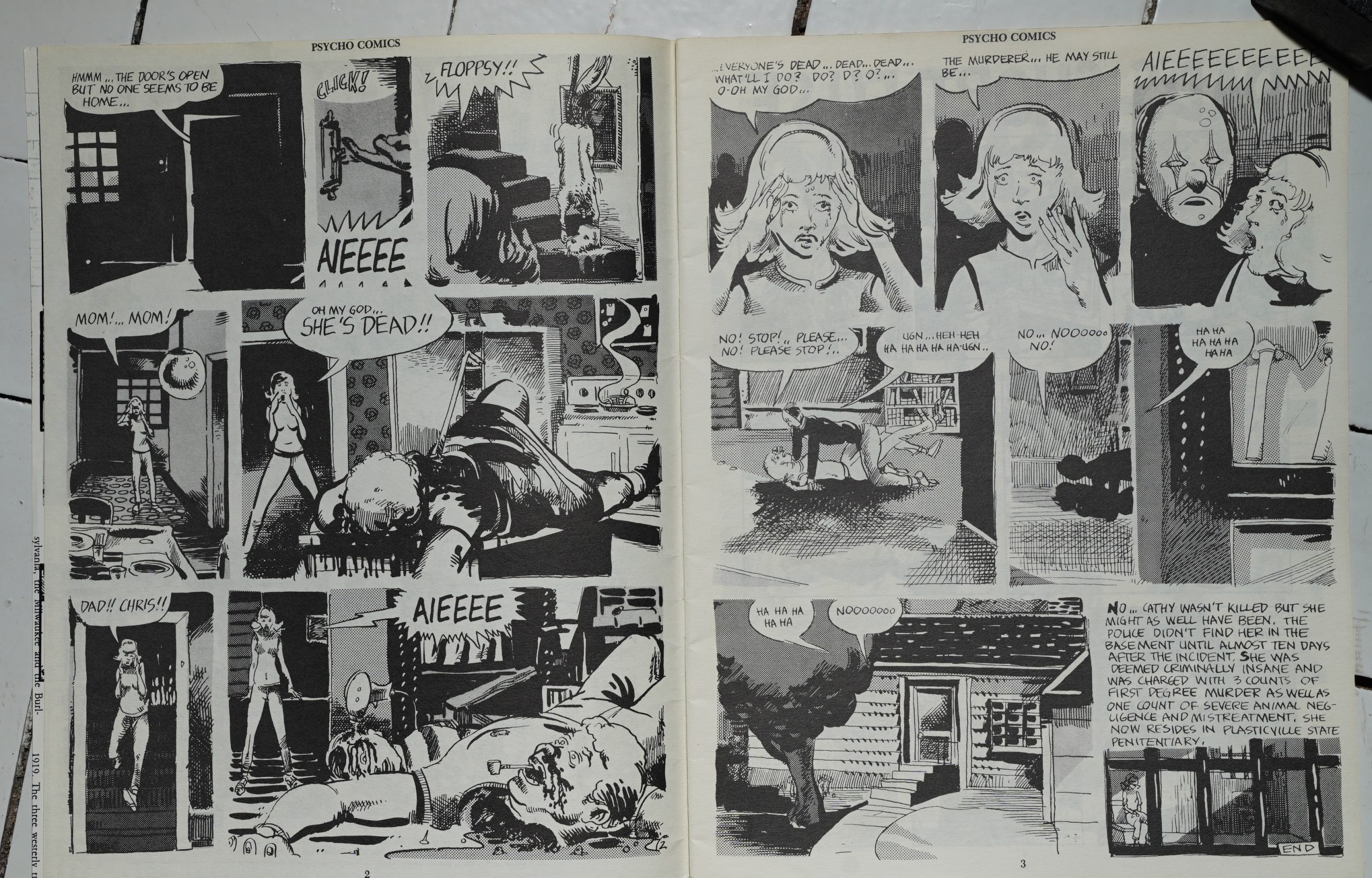 … but, no, it’s just sophomoric (and I mean that almost literally) riffs on EC comics: We’re solidly in Underground Comix territory, only with “cool nihilist violence”.

This is by Daniel Clowes, and doesn’t really look anything like his later work — but he’s a teenager here, I guess? 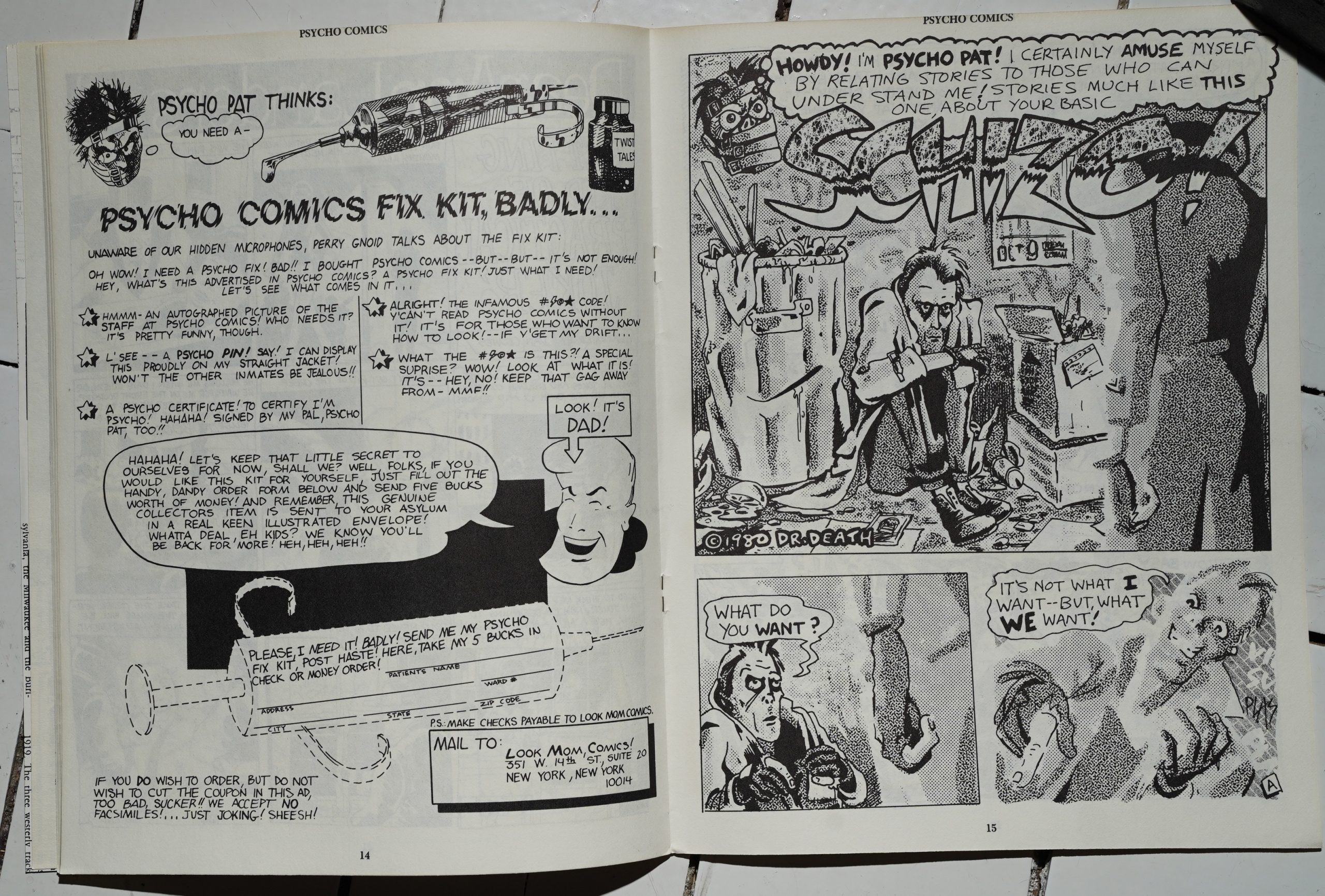 Some of these comics almost have something graphically interesting going on, like this one by “Dr. Death”, but it could also just be an accident. 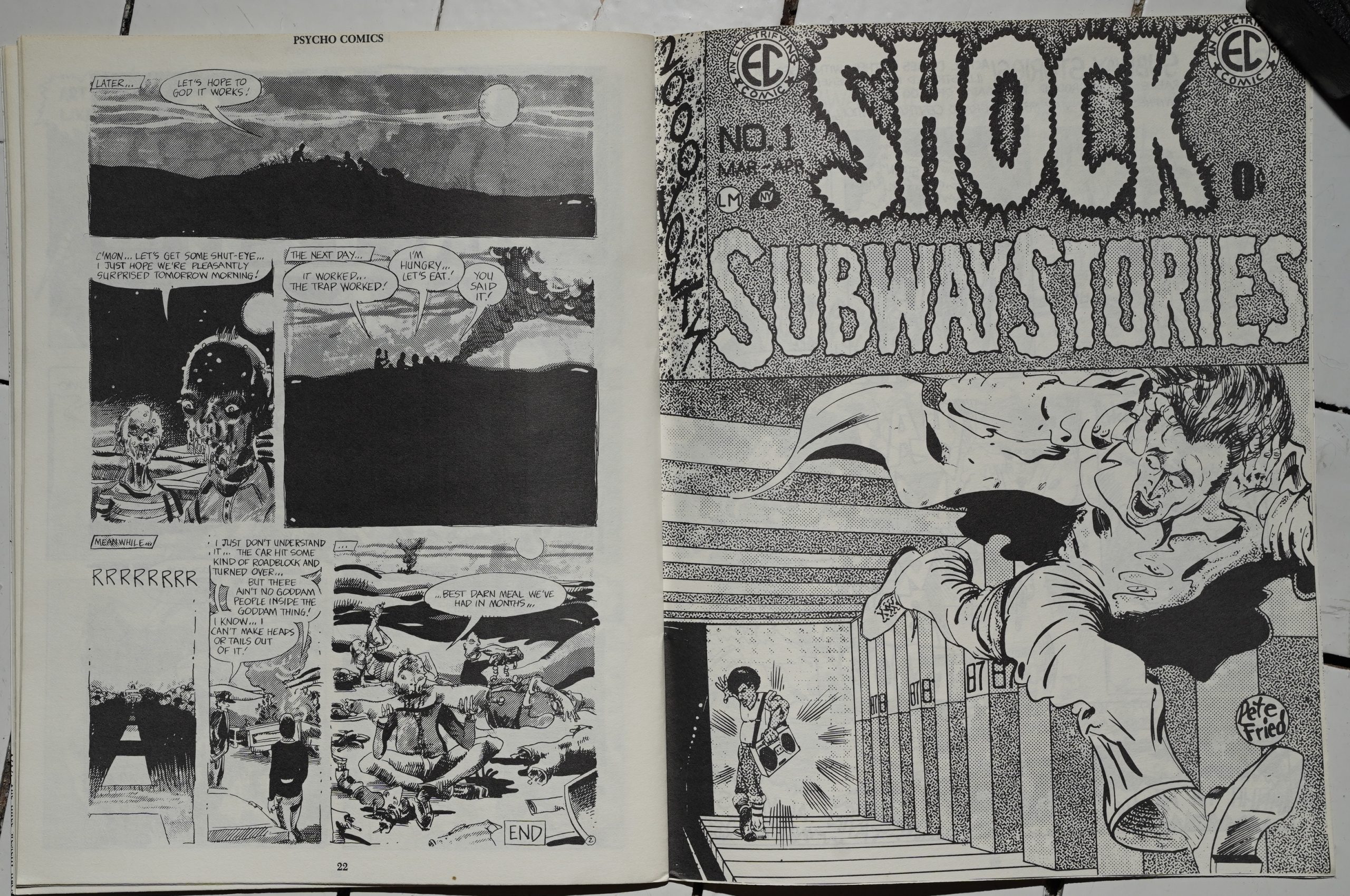 The EC references come swift and hard, like this thing by Pete Friedrich.

The first issue is 28 pages long, which is something I haven’t seen before. 24 and 32 are the usual sizes (based on 8 page signatures)… and it’s all unremitting dreck.

But, hey, it’s by teenagers who even self-published this thing — Rick Altergott and Clowes (and Friedrich?) set up Look Mom, Comics themselves, which you have to admire. 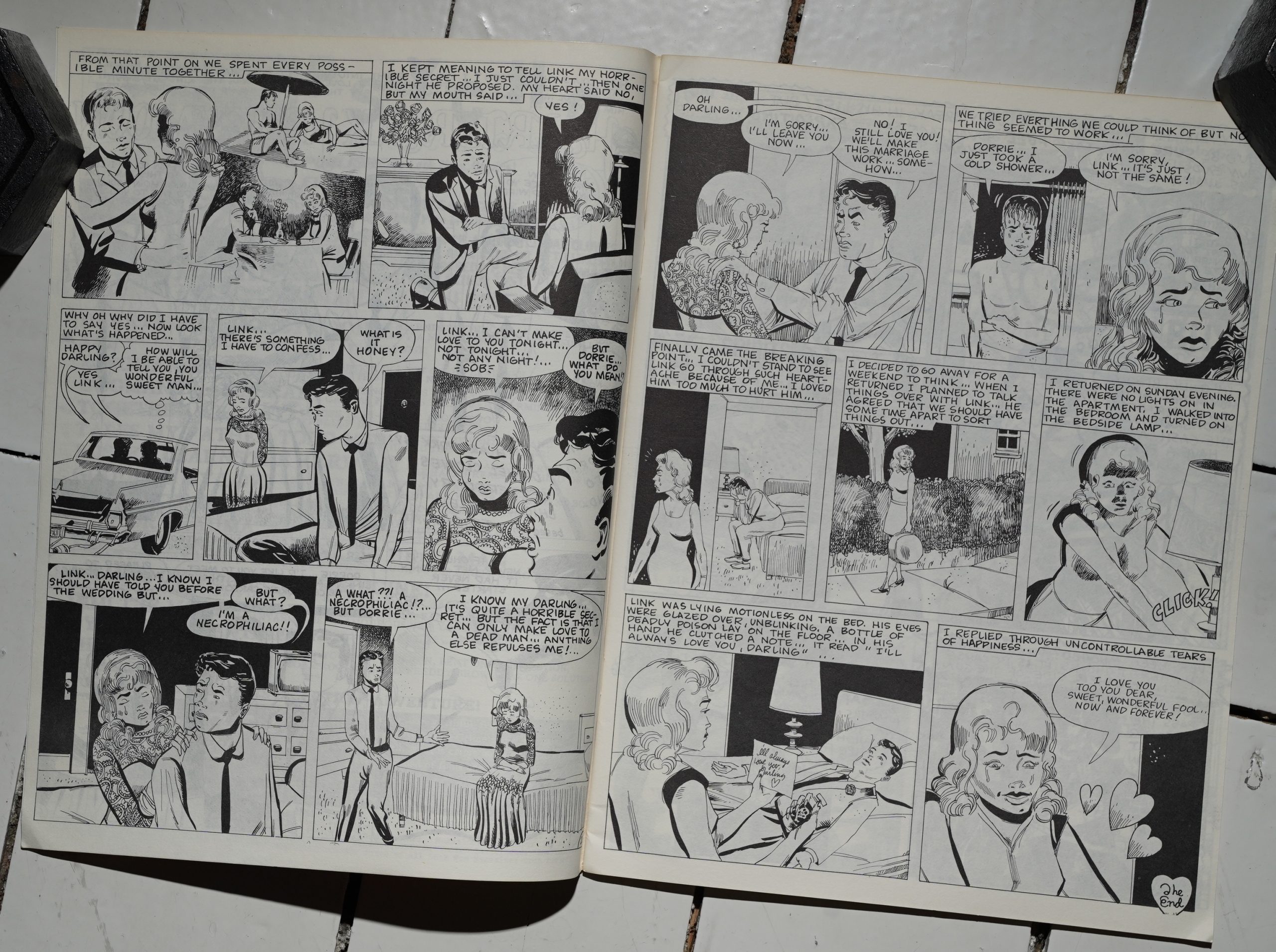 The second issue, published in 1982, is a lot more assured artistically (and is 48 pages long). Gone is the most “shocking” violence, and instead it’s a more good-natured silly riff on ECs. And Clowes, in particular, has grown enormously as an artist — it’s very Kriegstein-influenced, but you can pretty much see his mature style in here. 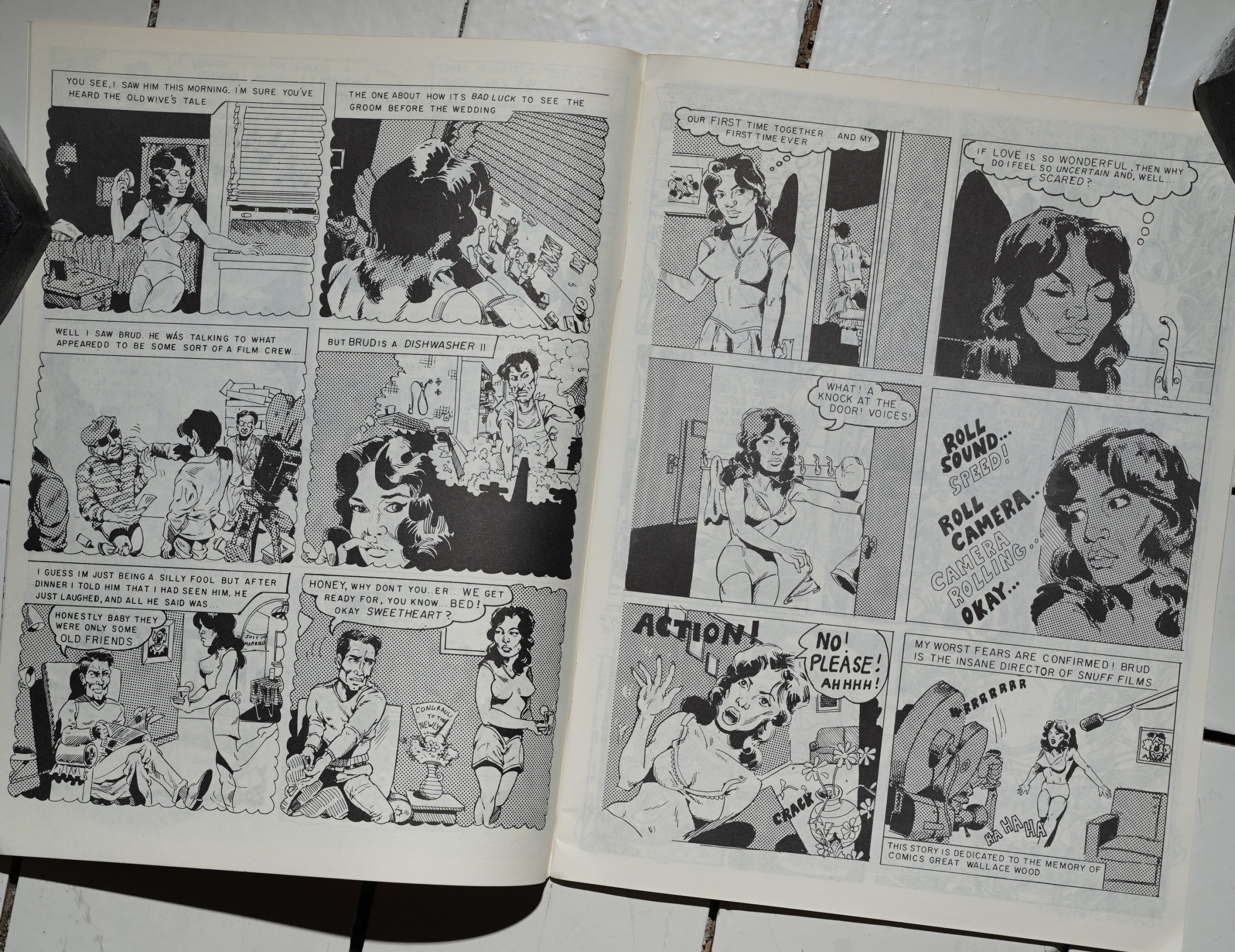 Altergott’s artwork is pretty wonky, but I guess that’s true to this day — all bobble heads and stuff. 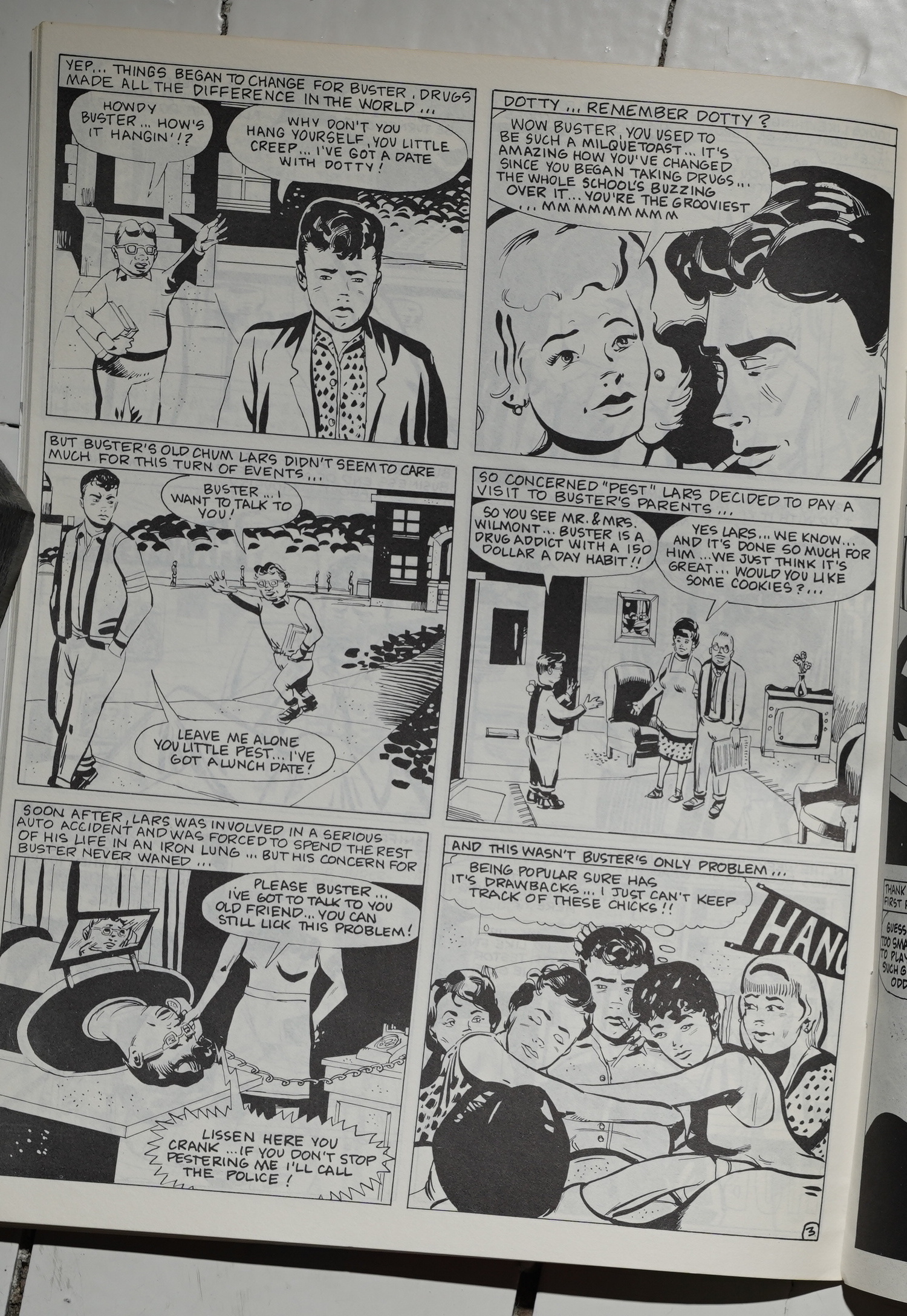 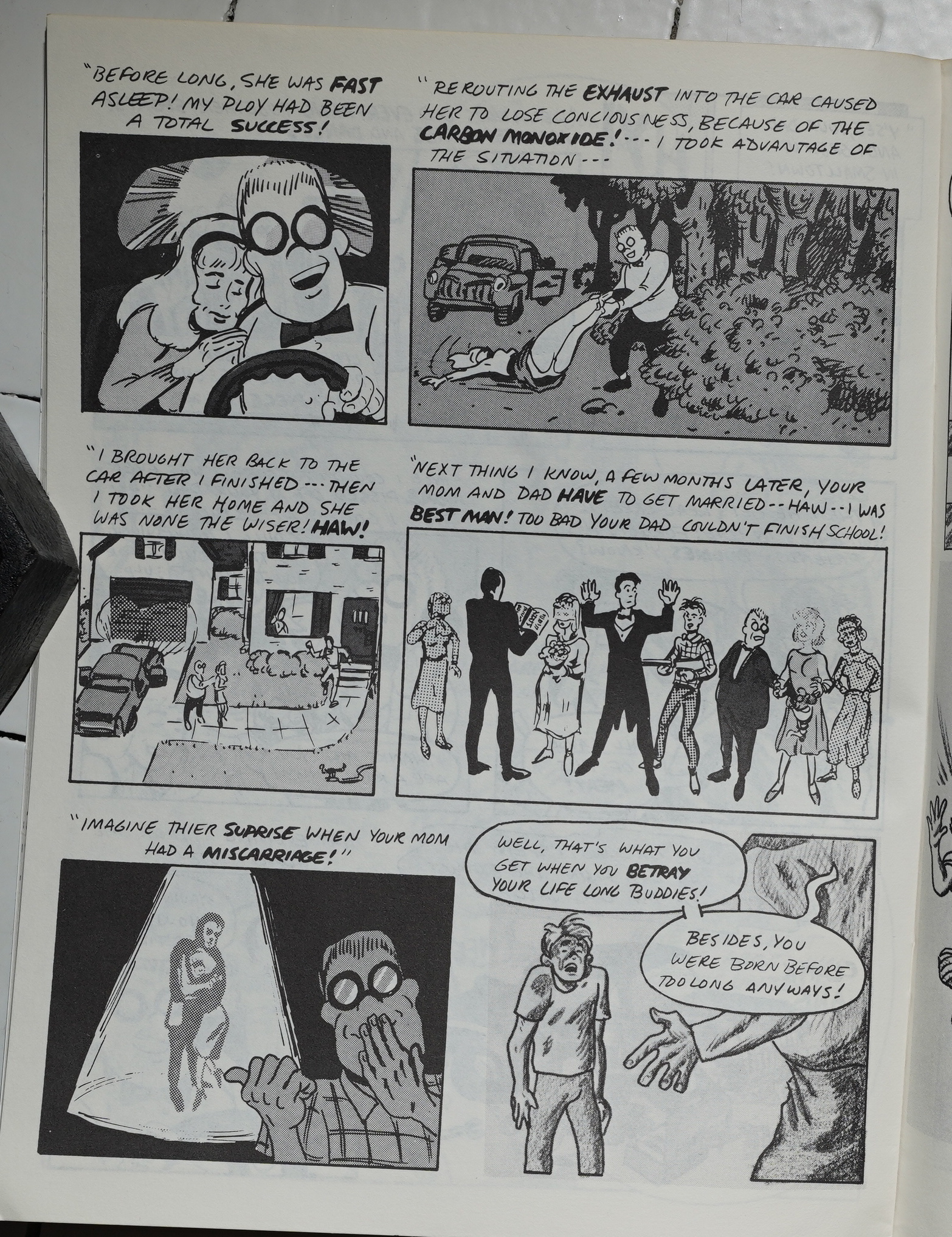 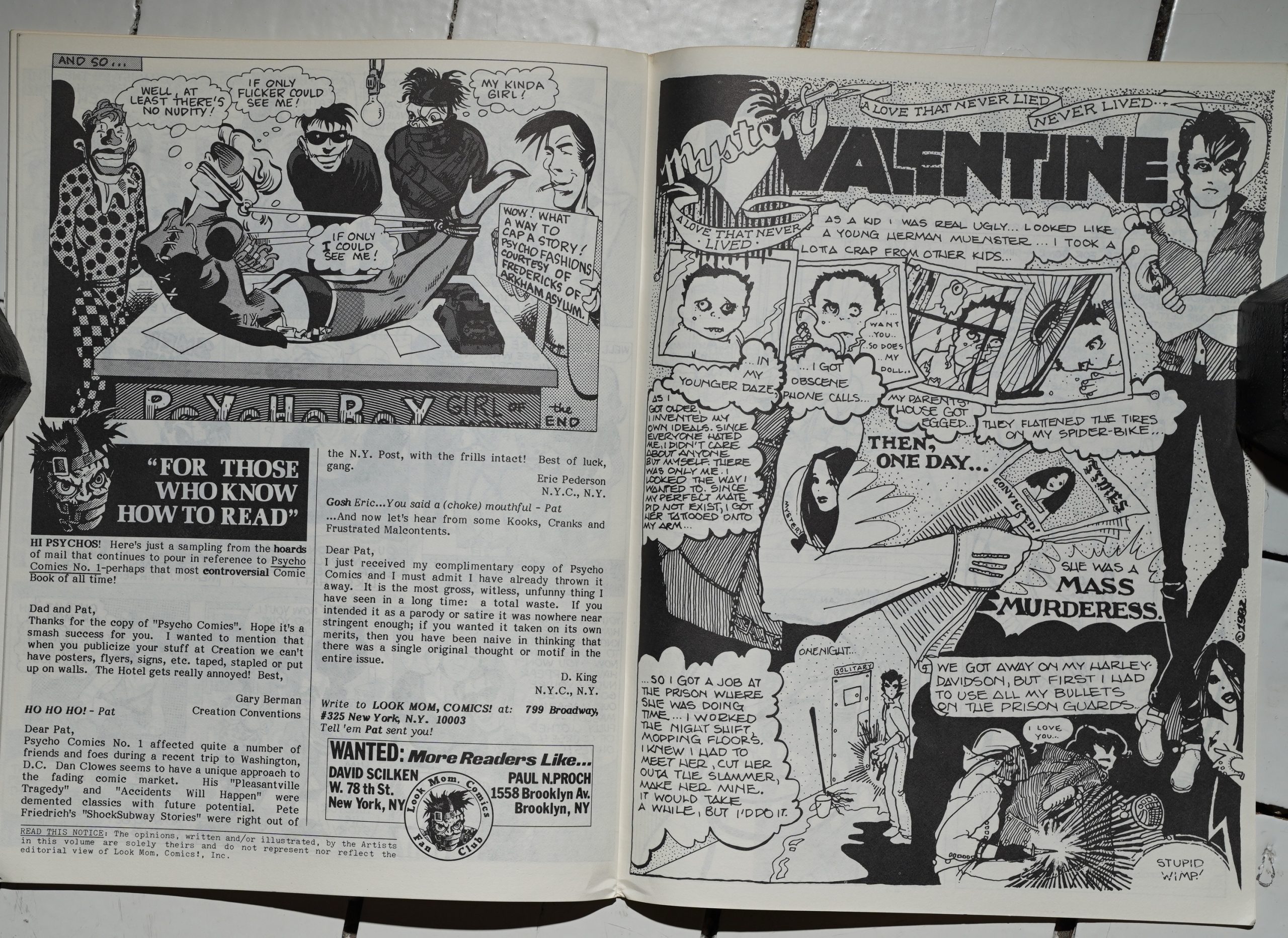 That page to the right, by P. Redding, kinda stands out here, in that it doesn’t use a traditional page layout. 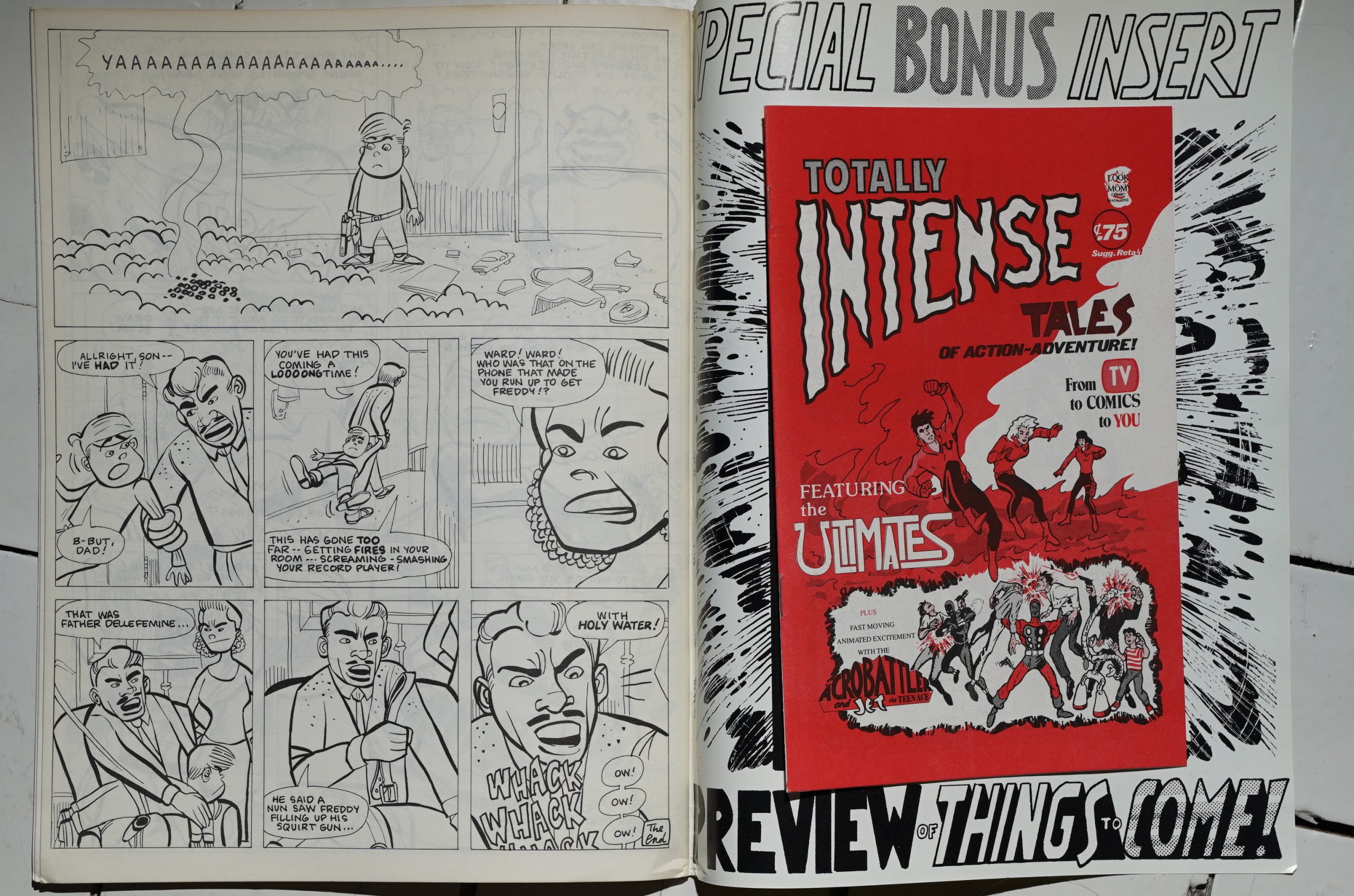 Apparently, all comics published around this time had to have a booklet insert. (See Raw, Bad News, and… er…) This one is about something called “The Ultimates”? It reads like it’s an ad or something? “Totally Intense Tales”? It’s a parody of something? 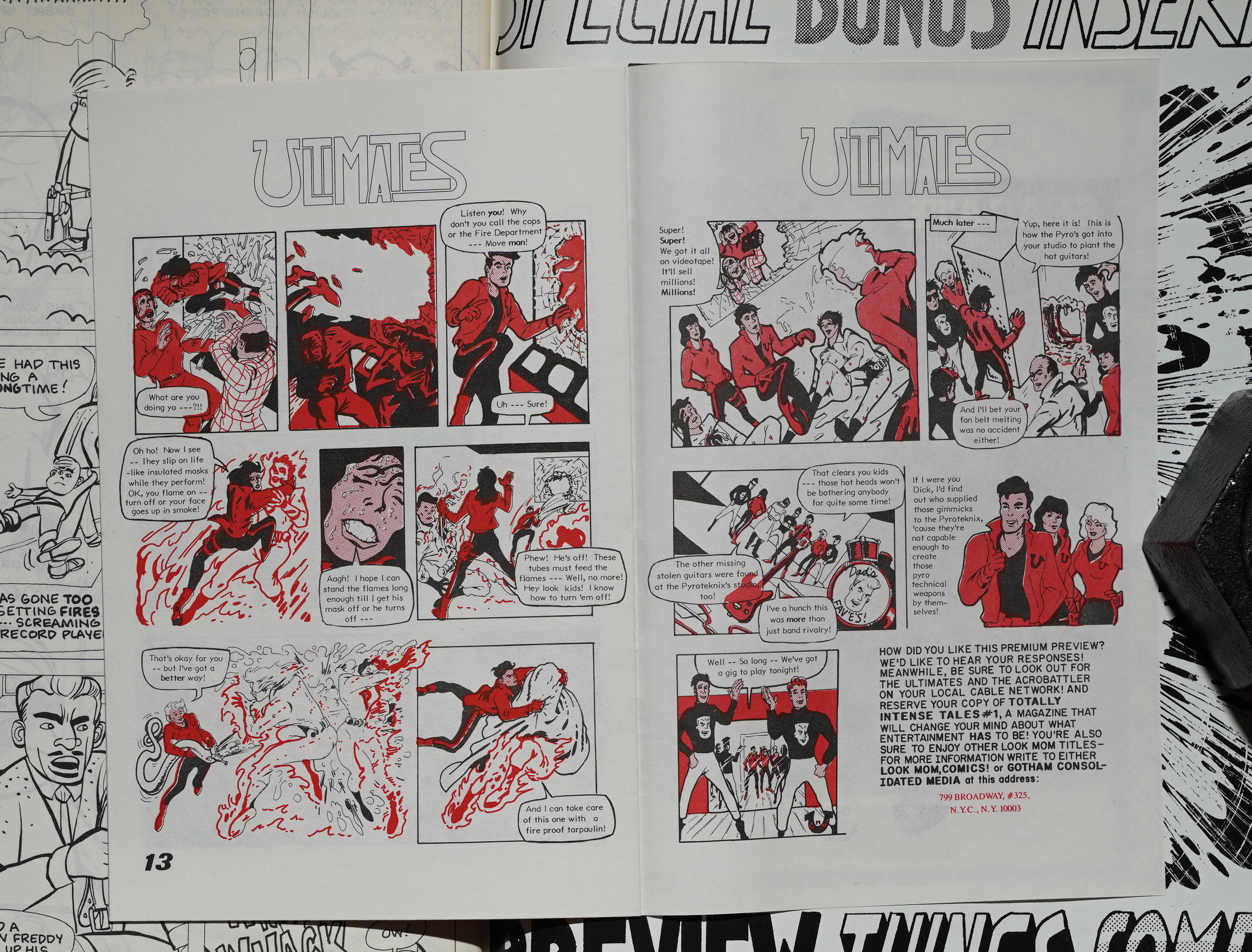 It’s pretty much unreadable, so… I don’t know…

psycho Comics is a sort of left-handed
attempt at mordant satire of bourgeois val-
ues, stressing explicit, graphic horror as an
antidote to the sanitized, official optimism
Of American middle-class culture. It’s an
attempt, I think, to distill the essential
subversive message of ’50s EC horror
comics, that beneath the placid surface
of Eisenhower serenity lies a disturbing
horror. A case in point is the lead story,
“The Pleasantville Tragedy” (art and story
by Dan Clowes), in which Cathy, a prcv
totypically pleasant, well-scrubbed, small-
town girl (“a third-year cheerleader at
Pleasantville High”) returns to her pleas-
ant home one pleasant afternoon to find
her pleasant dog, Floppsy, hanging upside-
down and headless above the stairwell;
proceeding on into the remainder of the
house, Cathy discovers Mom lying dead on
the kitchen table, not to mention her
father and brother, Chris, both hacked to
pieces in the basement. The masked
murderer appears and proceeds to rape and
perform God-knows-what perversions
upon poor, pleasant Cathy. Not only is this
cheerful stuff, but the sardonic end panel
advises us that Cathy was later deemed
“criminally insane” and charged with the
family’s murder, “as well as one count of
severe animal negligence and mistreat-
ment” (page 3).
That’s it. There’s no subtext or plot,
simply a three-page delineation of Cathy’s
horrific discoveries (in grisly detail) and the
sour irony Of the ending. (We are spared
the actual rape.) Several elements highlight
the distanced point of view taken by
Clowes toward the subject matter: the
heerful banner that initially identifies the
story as “a fast-moving tale of adventure”;
the reiteration of the point that “nothing
of interest” has ever happened in Pleasant.
ville or to Cathy; the coda which indicates
Cathy’s insanity and incarceration in
“Plasticville State Penitentiary.” Along
with several others in Psycho Comics, this
feature leans heavily on a hard-core detail-
ing of the bloody remains of the victims,
yet smirks at the middle-class banality of
the victims. In this regard, Clowes pictures
certain details in a gruesomely tongue-in.
cheek way: Dad’s pipe is still in his mouth
(though his head is severed from his body),
and Mom had been stabbed to death with
What appears to be a curtain rod. A press
release from the publisher, Look Mom,
Comics! draws prideful attention to other
details of Americana in the story, in-
duding Mom’s steaming apple pie on the
stove and the “hotel style wallpaper”
adorning the house. Pretty punk, all this.
The peculiar effect is akin to watching
an episode of Happy Days transmogrify into
a blood-curdling episode from In Cold
Blood crossed with Halloween.

Frankly, I’m still not certain just What
to make of this book. A cheerful press
release from Look Mom, Comics! pro-
claims that Psycho Comics is aimed at the
collectors of 1950 Horror, Terror, and
Crime Comics, “especially EC fans,”
among others. I wonder. Executed with
remarkable skill, the EC horror books
belong to the era Of conformity and un-
questioning belief in the material progress
of the American future; they belie the of-
ficial optimism of that era. Psycho Comics
simply calls attention (in a rather artless
way, for the most part) to some of the hor-
rors so persistently in our midst. (One
piece, Pete Friedrich’s EC-inspired
“ShockSubway Stories,” has no other
point beyond documenting some pur-
portedly authentic subway horror stories;
similarly, Clowes’s “Dear Ann Landers”
documents in one page the evolution of a
high school senior from a practical joker to
a raving lunatic. ) The tone Of psycho Comics
is a revelling in squalid horror for squalor’S
sake, the kind of material designed to of-
fend cultural guardians, weak sisters and
well-meaning suburban hausfraus. Not my
cup of tea, I’m afraid.

The cheerfully demented folks at Look
Mom, Comics! Have published a second
issue of Comics. Ostensibly aimed
at fans of EC-type horror stories, psycho
Comics is an anthology title featuring
stories that mix a sardonic, tongue-in-
cheek approach to storytelling with liberal
doses of gross-out humor. The book is
clearly the work , of energetic amateurs.
Most of the features are short sketches,
with writers quickly setting up a premise
and aiming for a pungent or surprise finish
in the EC mode. While not credible on
their own merit, one or two of the stories
work up to some marginally effective
moments Of EC-parody. Though his work
is a patently awful approximation of Wally
Wood’s style, for example, Rick Altergott
creates a few panels in “Terror Trauma
that are daffy-bizarre send-ups of EC
writing and pictorial styles. With the ex-
ception of a contribution by Gene Fama in
this issue, though, the writing and artwork
in psycho Comics are ineptly or crudely
managed, or both. None Of the writers
seeks to build up any sympathy for or iden-
tification With character. The attitudes
toward humanity in general are cheerfully
misanthropic, and the cynicism Of a piece
like “Buster Learns the Hard Way,” which
portrays one Of the book’s only sympa-
thetic characters as a shlemiel who dies
when the plug on his fron lung is acciden-
tally pulled, pervade most of the stories.

Well, OK, doing this book in this blog series was a bad idea. I know!