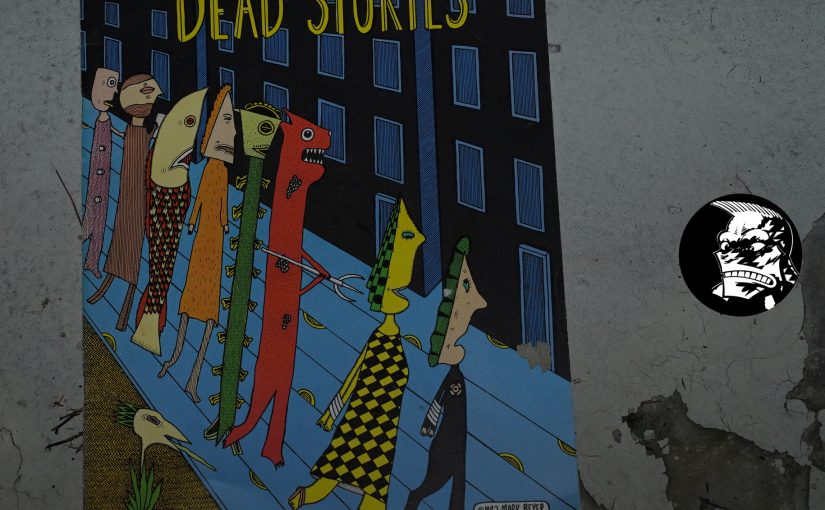 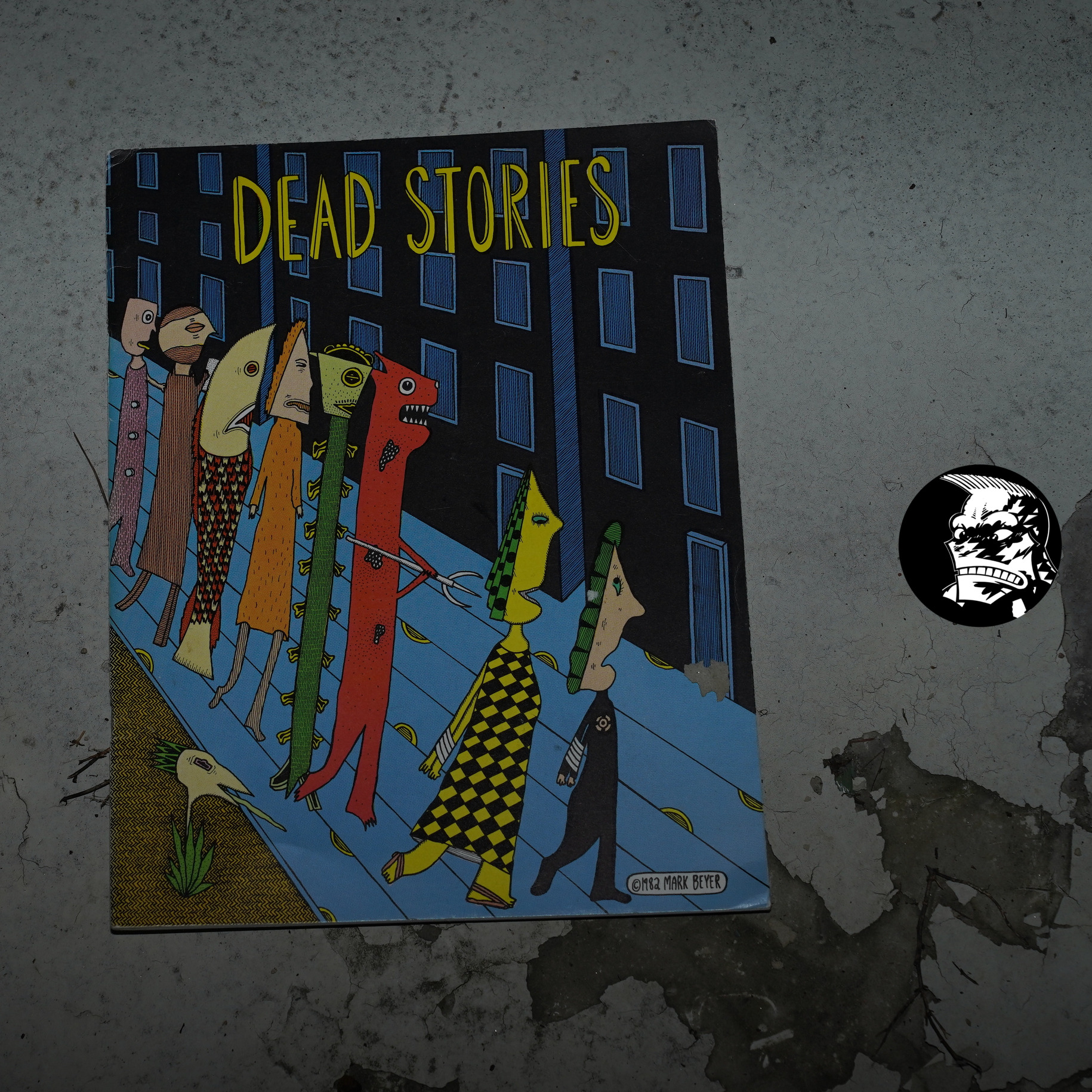 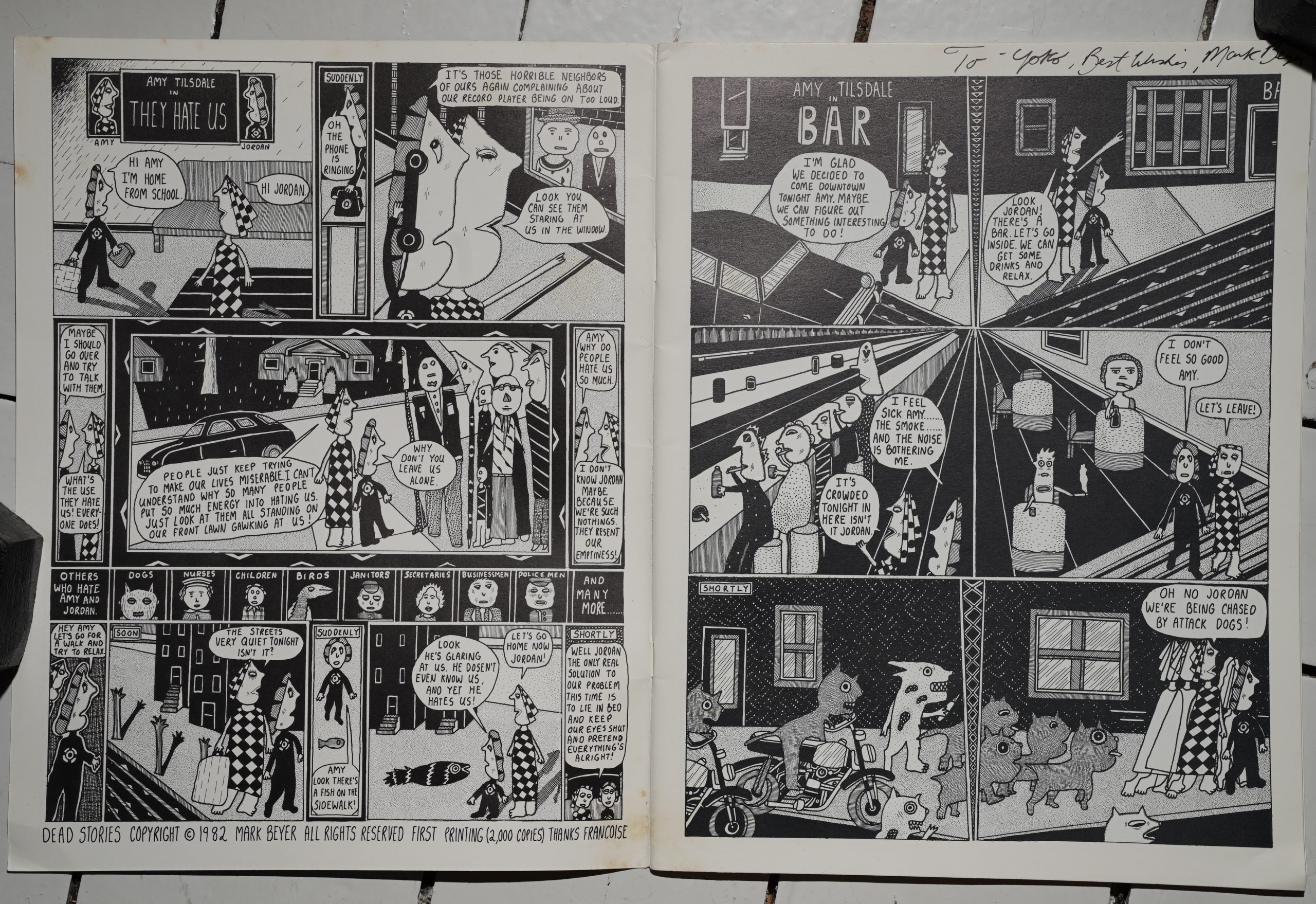 The odd thing about this book is that it looks so normal. It’s standard magazine-sized, with a heavier paper stock and white, matte paper. Beyer thanks Françoise Mouly, and she did have a printing press, but this surely can’t have been printed there? It’s so… professional.

This copy is signed by Beyer and dedicated to somebody named Yoko. 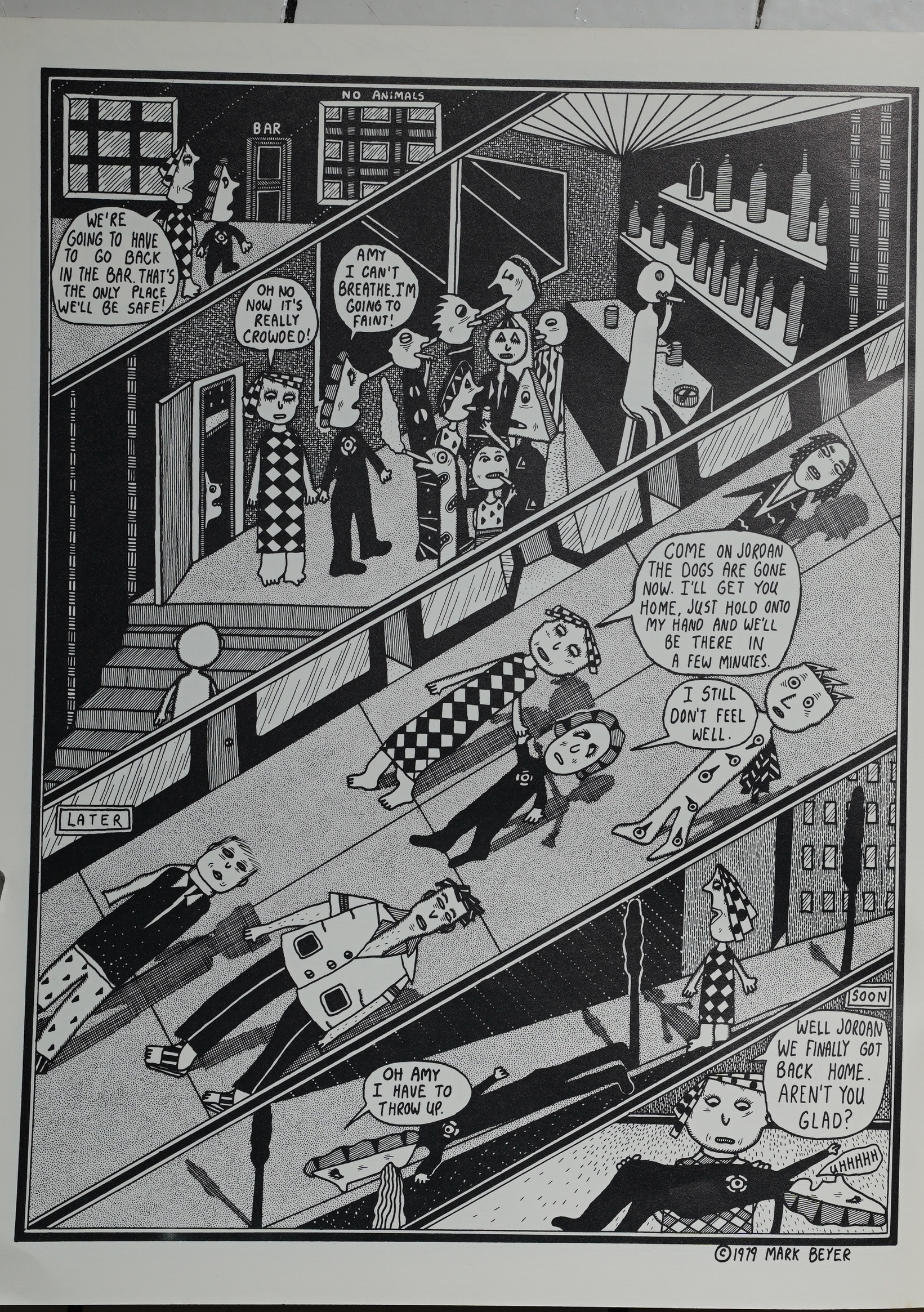 Looks at the perspective in the middle panel! I absolutely plotz with adoration. 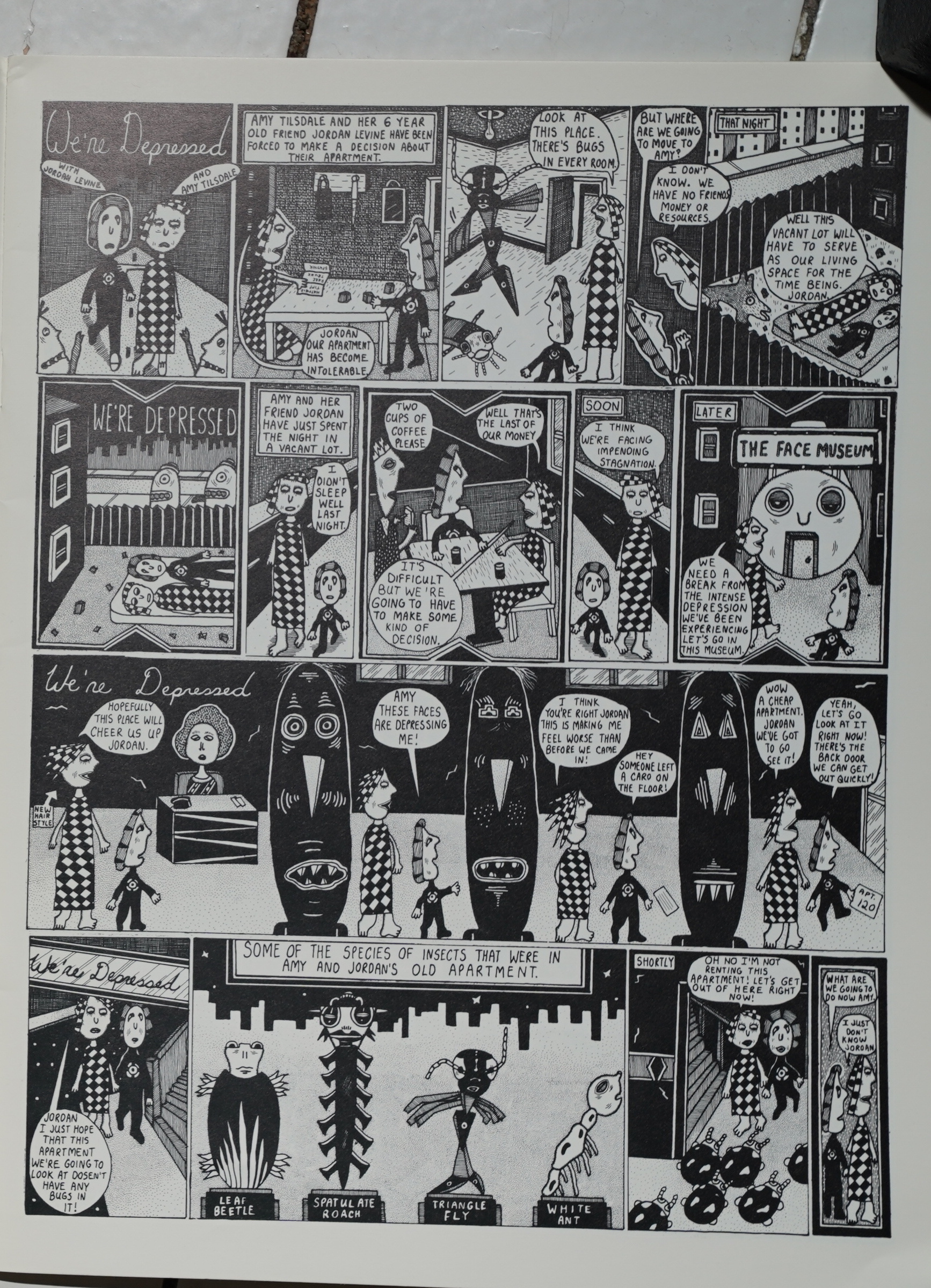 This is a mix of stuff created between 79 and 82, so we get a series of “daily strips” called We’re Depressed, but it’s mostly shorter, full-page stories. 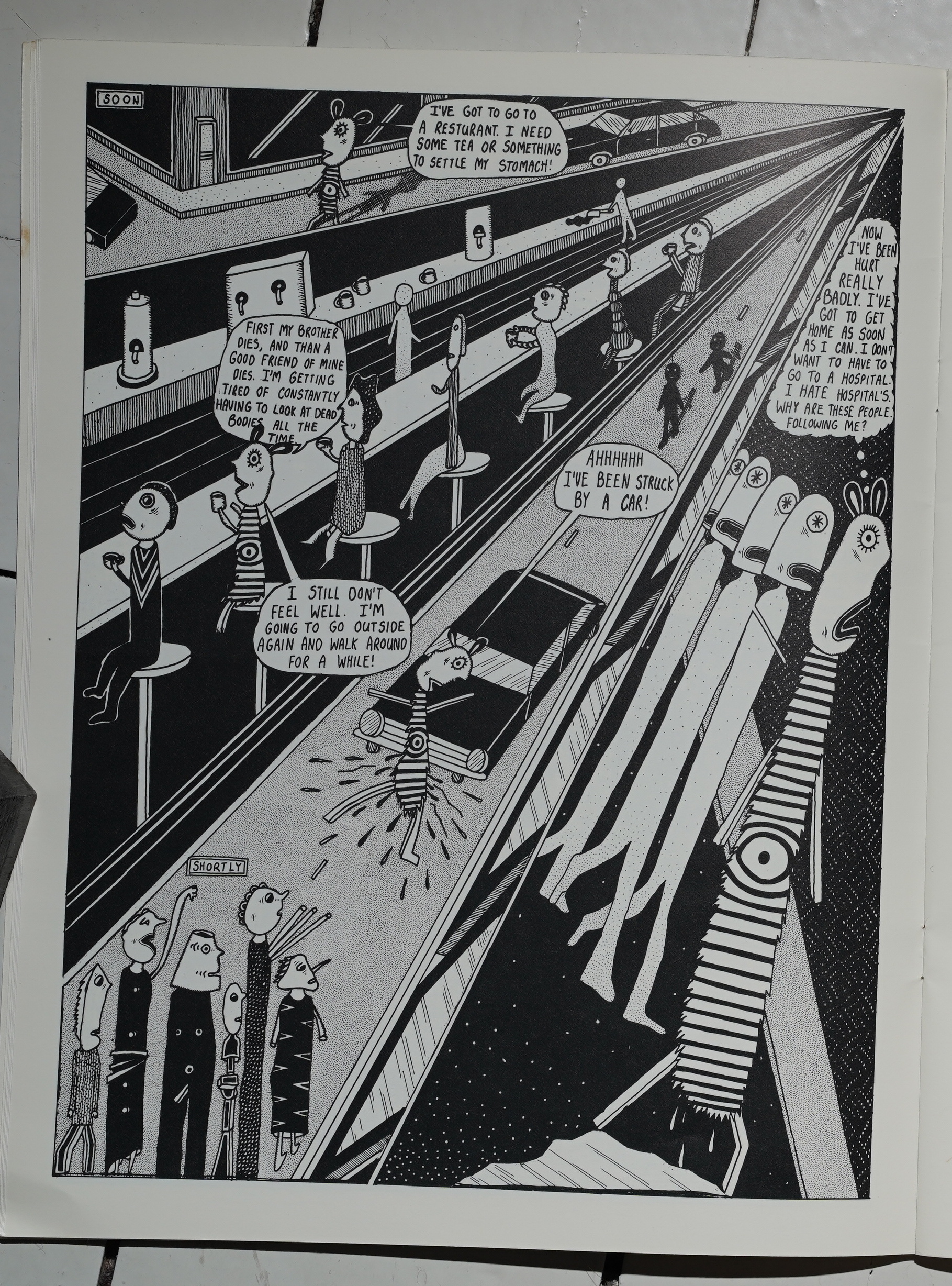 These are pretty early Beyer works, but it’s fascinating how basically everything’s here already. It’s hard to know how to related to these strips — do we laugh? Despair? Both? The pages are so gorgeous, and that muddles the water further. 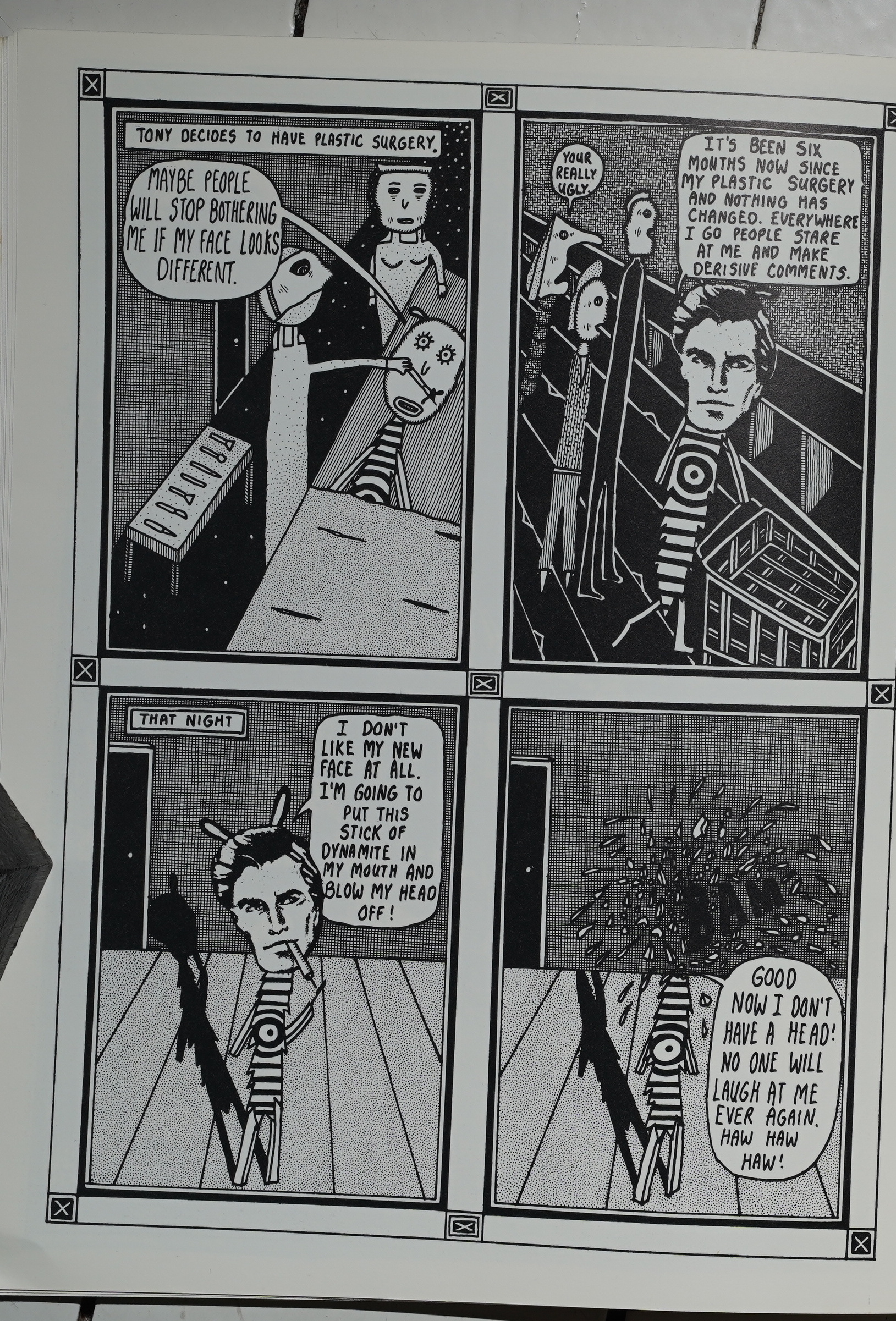 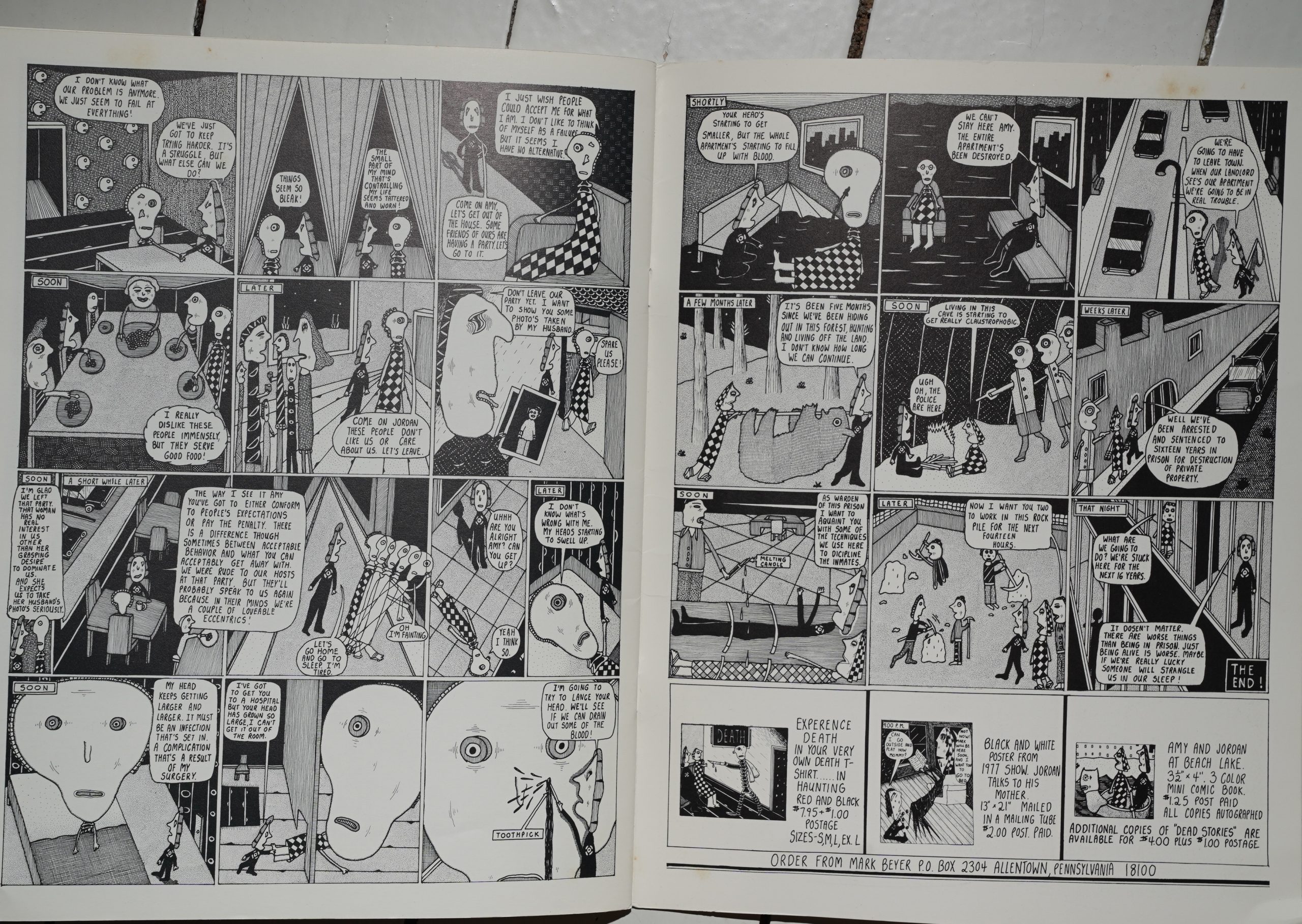 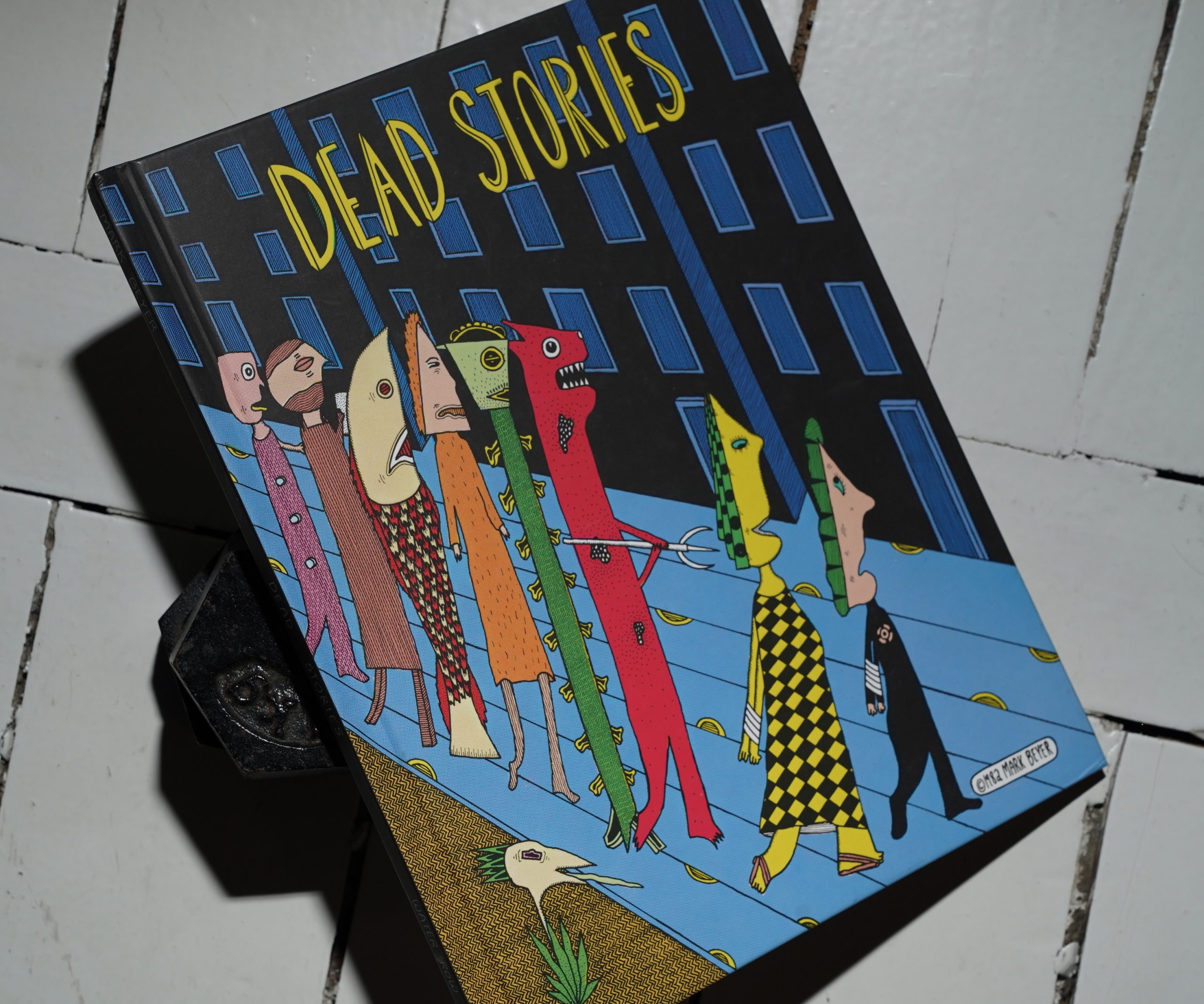 The book was reprinted by Water Row Books a couple decades ago. This time it’s a hardback book, but it’s otherwise pretty much identical. 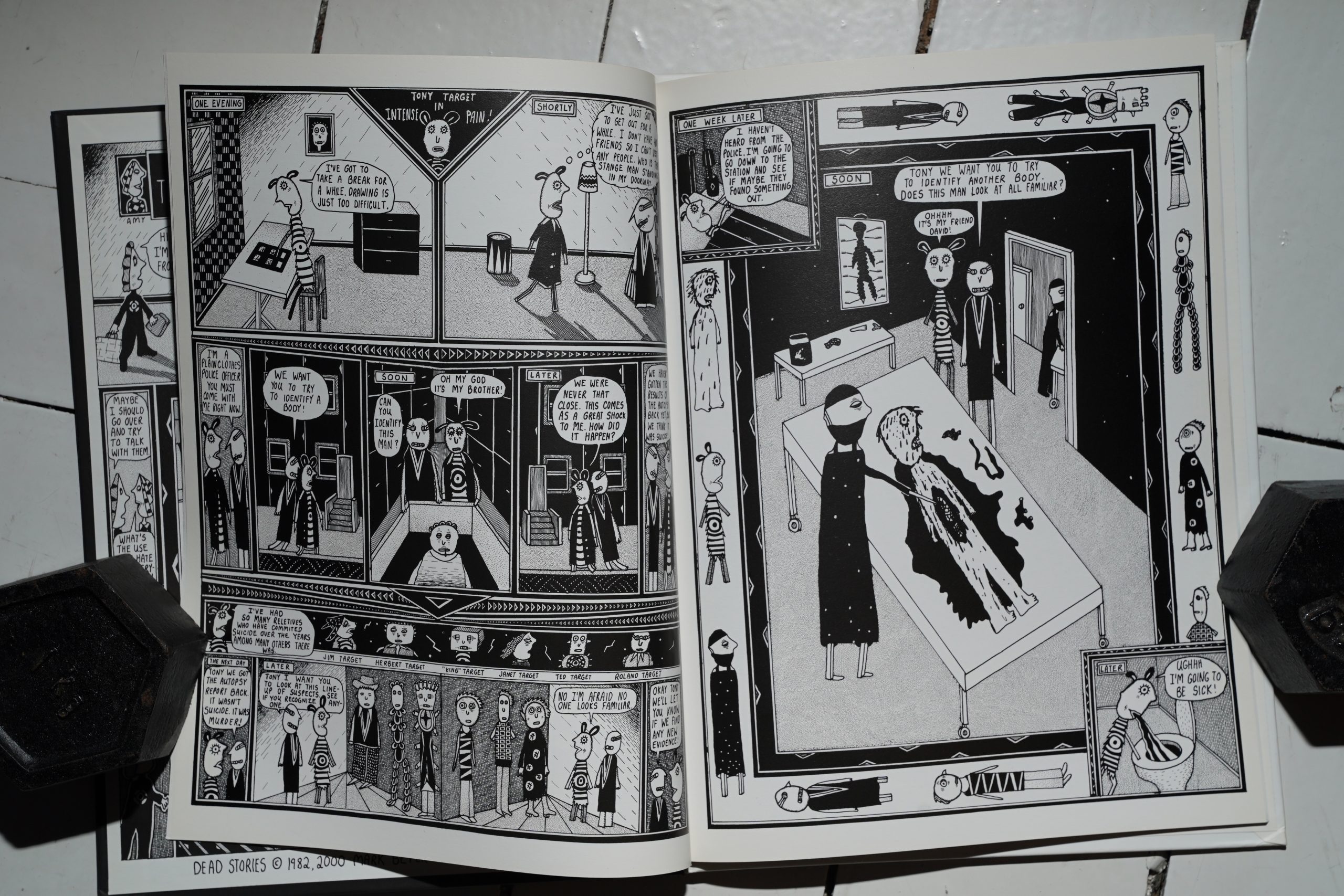 It looks like it’s a facsimile edition shot from a printed copy of the book — the stippling is a bit uneven, but it’s a good reproduction.

A FEW RECENT CLASSICS
Dale Luciano on Dead Stories,
How to Commit Suicide in South Africa,
Bright Ideas, and The Survivors!:
The Eyes That Burned

Dead Stories is a collection of some 14
stories, most of them dealing With Beyer’s
two favorite characters, Amy and Jordan
(who have appeared in RAW magazine);
most of them are short, though one am-
bilious epic entitled “Agony” runs seven
pages. In each, Beyer etablishes a situaion
Of elemental simplicity—Amy and Jordan
“go downtown,” for example, or Jordan
wakes up and doesn’t feel like going to
that day—in which the characters do
little more than react, more or less passive-
IM, to the harsh terms of a given, Often
bizarre reality. Not untypical Of the sense
Of despair and ennui that infuses the stories
is “We’re Depressed,” in which Amy and Jor-
dan, suffering from acute anxiety about
their bug-infested apartment and poverty-
stricken lives, decide to lie down on the
sidewalk and die. End of story? No. They
get up before they die and keep making the
difficult effort to survive—though nothing,
save momentarily, fleeting pleasures (like
eating or floating downstream on a river)
alleviates the shared perception Of their lot
as a dismal and hopeless enterprise.
Everything that transpires in the charac•
ters’ lives revolves around their inescapable
anxieties concerning death, and in Beyer’s
Amy and Jordan, the lead characters ot Dead
Stories.

There’s a disturbing absence of belief in
the possibilities for constructive or self-
determining action in many of these pieces.
Two of the stories inwlve a character named
“Tony Target.” In one of the stories, Tony
is struck down by an automobile following
the deaths Of his brother and a good friend;
while recuperating in the hospital, Tony suc-
cumbs to a fatal heart attack. In the other
tale, Tony is haunted by the sensation Of
people staring at his face; after trying plastic
surgery and finding the results less than
satisfactory, he inserts a stick of dynamite
in his mouth and blows his head Off. It’s
guignol, but guignol aware Of its Own macabre
implications.

In terms Of style, Beyer creates the surreal
dreamscape Of a nightmare and reveals the
elements of the dream (the images of
snowmen, giant birds, a house crossing a
road, attacking dogs) in the incipient forms
Of a child’s caricatural rendering Of reality.
The effect is simultaneously eccentric and
amusing, and Beyer’s extravagantly formal-
ized expression of the reality distances the
essential frightening tone and spirit of the
dream. And yet. , . there is a deep and
brooding melancholy to these images of
Amy and Jordan’s world that is often more
than a little disquieting.

Mark Beyer’s is an extraordinary vision,
and Dead Things is a remarkably consistent,
cohesive piece Of work. This is a vastly more
abstracted account Of human reality than
has probably ever been seen in comic books.
(Many will certainly dismiss it outright as
an embodiment Of the Outre.) It’s a wildly
original comic-horrific vision of things,
though, and it would be incorrect to allege
that Beyer hasn’t sorted Out. the complex
fears and anxieties that permeate these in-
tricate fables. As an excusion into the realm
Of shroud-wearing fantasy, Dead Stories is an
astonishing collection of work.

Richard Sala is interviewed in The Comics Journal #208, page 68:

I had never stopped writing. I would take the
BART train to work every day, writing, then at home,
rd draw pictures to go with the stories. The main
influence on me was not so much or Weirdo, but
Mark Beyeds Dead Stories; when I saw that, it was a
revelation. I really related to his feeling of negativity
and his primitive art style. I looked through it to see
who the publisher was. I couldn’t find the name ofa
publisher, and it dawned on me that this guy did this
himself. I followed Mark Beyer’s format with the card
stock cover, magazine-size, for Night Drive.
If I haven’t said it before, I should say that I never
thought I would make it to 30. One of the reasons I
couldn’t really imagine becoming a successful artist in
my 20s was that I had been thinking about suicide
every day since the time I was a teenager.
SULLIVAN: Seriously thinking about it, or romantically?
SALA: There were times when I felt really bleak, and I
just felt negative all the time. I couldn’t see a frture.
When I was living in Arizona, that
was another thing — I didn’t relate
to any older people.

So when I read Dead Stories, it
reallyhit a chord, that whole feeling
Ofhelplessness, hopelessness. ltwas
almost a validation that a person
with my attitude, my feelings, could
do something like that. Of course, it was the time of
punk, evqthing
“tas sort of do-it-yourself, and I
thought, m going to do it myself. I II do my own
Like I said, I had no knowledge at all of how the
market worked. I knew about Bud Plant, because I’d
seen his name around. I remember ordering Crumb
undergrounds and Rick Griffn undergrounds from
him when I was in high school. The only other thing
that I knew was I saw Raw being sold at City Lights.
So I went into City Lights with Night Drive, and they
took wrne copies. So there was a time when the only
comics being sold at City Lights in San Francisco were
about 10 copies of Night Drive and a bunch of copies
of Raw. I was really proud of that.

A Cover story in the Washington
D.C. weekly City paper finds
underground comics
“practically dead,” recent
independent companies such as
Pacific “mean-spirited retreads
Of 1950s EC,” and mainstream
comics a situation of “boys
drawing for other boys (the
same old story).” The three-
page article, in the January 6
1984 issue, concludes that
“enough kids are bored by the
space barbarians and skintight
suits to make a small market for
some more adventurous maga-
zines” and spur an “as-yet-
unnamed cartoon/art movement
that will have increasing
repercussions in the hip graphics
that we will all pore over in the
next five years.
Author Matt Groening, artist
of “Life In Hell,” sums up the
current mainstream/ independent
company titles: “Death, blood
and decapitation are back in
style, along with an
unprecedented preoccupation
with impossibly huge breasts
and male muscles bulging
everywhere except in the crotch.
The comic book industry may
someday redeem itself with a
well written book, but right now
things are in as pulpy a State as
.. ” In contrast, writes
ever.
Groening, “The new cartoons
say: All that technique by the
big guys doesn’t matter if you
don’t have anything to say.”
This reactionary cartoon/art
movement, which embraces
“punk, new wave, newave,
artoons, scratch art, messy art,
ugly comics,” is dated by
Groening as beginning in 1977.
‘ •The new cartoonists,” states
Groening, “offer a humanistic
reaction to media slickness and
an almost technophobic disdain
for the future, portraying in
their crude markings the
clumsinesses of everyday life
and all its little lumps.” They
• ‘work to please themselves
first,” and their output is
sometimes characterized by an
“unashamed amateurishness.”
According to Groening,
“dozens, perhaps hundreds” Of
artists “began drawing Oddly
for the first time in the
mid-’70s, some of them aware
of each other and others
creating in isolation. ” He cites
Pennsylvania artist Mark Beyer
(Dead Stories), Lynda J. Barry
(Girls & Boys, “Ernie pook’s
Comeek”), Flick Ford (cartoon
editor Of the East Village Eye),
NYC artist Mark Marek (New
Wave Comics), “the Harvey
Kurtzman-intluenced cartoons
of J.D. King and John
Holmstrom” (Punk, Stop!) and
LA artist Gary Panter (Jimbo).

In attempting to define the
Nu Mutant art sensibility,
Groening often achieves a tone
highly reminiscent of Susan
Sontag’s famed 1964 Partisan
Review essay, “Notes on
•Camp’. Sontag prefaced her
notes with the comment, “Taste
has no system and no proofs.

I immersed myself in Dead Stories, the
Second collection of Mark Beyer’s work,
with the slightly guilty pleasure of an
Elizabethan Classicist devouring the latest
installment of Spenser’s Faerie Queen or an
Edwardian parent sitting up with one of
Andrew Lang’s anthologies of fairy tales
(“with numerous illustrations by H.J.
Ford”) after the kiddies have had their bed*
time story. Beyer, that is to say, appeals to
the childish side of me thaf has persisted
into adulthood: I accept Amy Tilsdale, Jor-
dan Levine, and Tony Target as “real?
characters; want to read stories about
them (with Beyer providing the “numerous
illustrations”) over and over again; and I
don’t want their adventures ever to end.
Beyer’s rare gifts as a mythopoeic
teller and draftsman, his use of word bal-
loons as positive shapes in his composi-
tions, his interpolation of allegorical figures
and decorative motifs between his panels
and his use of eccentric/symmetrical page
breakdowns (these last two devices inspired
by Lyonel Feininger’s Wee Willie Winkie’s
World) have already been ably described by
David Kasakove in his Panels review of
A Disturbing Evening, Beyer’s earlier collec-
tion. can add only that there are . no
negative shapes either in Beyer’s comics
pages or in his splendid paintings on glass,
a fact which accounts for their hothouse,
fever-dream, Byzantine-icon quality; and
that Beyer uses his Feipingeresque tech-
niques as iconic binders, which both inten-
sify the narrative flow and turn every page
where they appear into a single, simulta-
neous image. Some examples of “simul-
taneous” pages from Dead Stories: Tony’s
anxiety attack on page 4 of “Bad Days”;
Amy’s severed arm on page 2 of “Dere-
licts”; and “Death,” originally published
by Beyer as a one-panel-to-a-page booklet
in two colors, here reprinted as a two-pager
with interpolated figures and illuminated
borders. (l can’t make up my mind which
version of “Death” I prefer: I love them
both
I am not trying to be cute or perverse. I
love Beyer’s work for the same reasons that
I love the unexpurgated version of “Cinde-
rella” and the wonderfully inept attempts
porary and touches the reader at the primary level of past art.
of Lang and Ford to bowdlerize world
folklore for English nurseries, Beyer has
created a world Of fear, violence, death,
and love that is both unmistakably con-
temporary and that touches us at the pri-
mar y level of the mythic and allegorical art
of the past. •It is in this profoundly
imagined variant of Our Own world that
Amy, Jordan, and Tony live and move and
have their being.