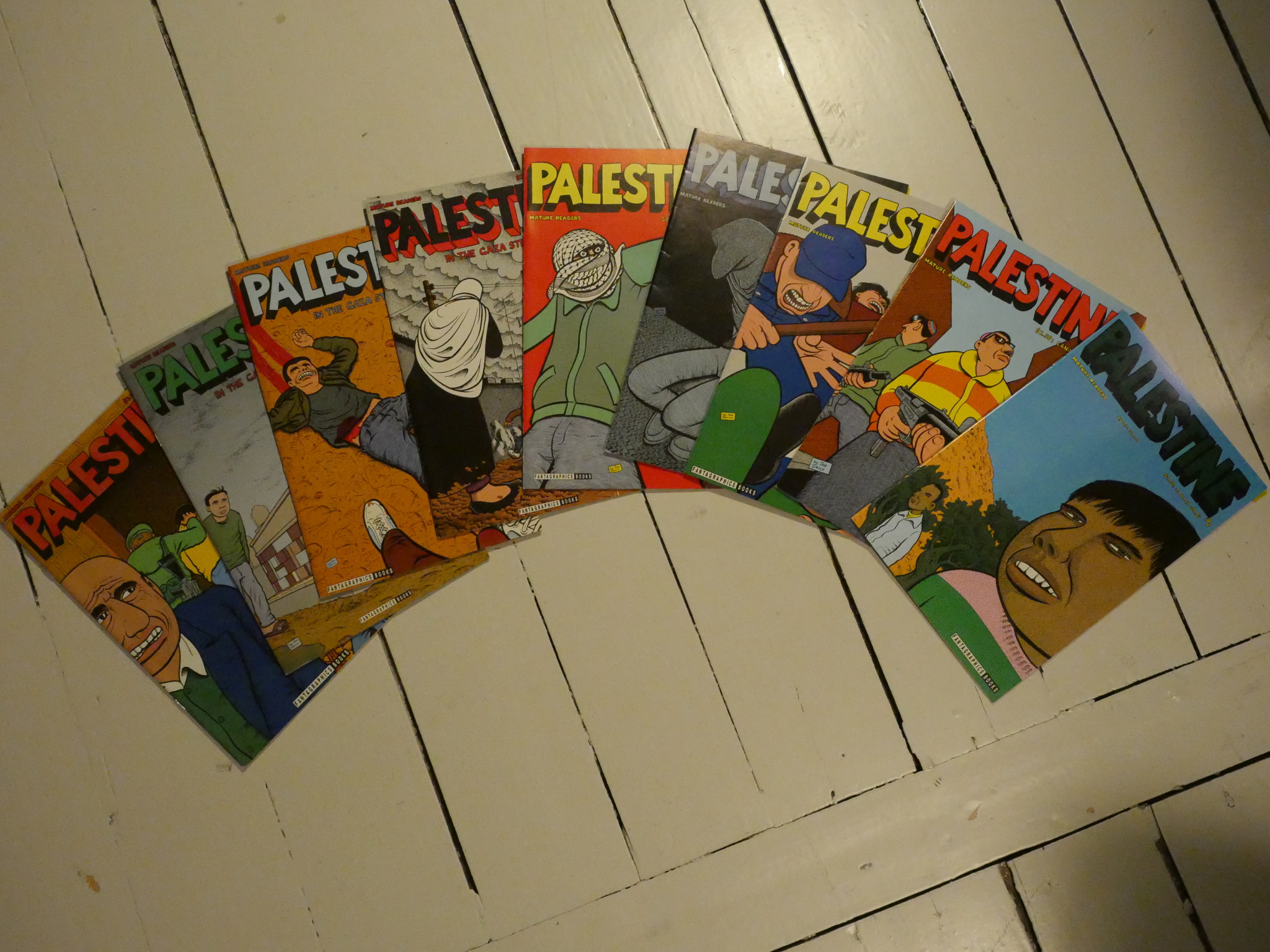 Last time we visited Sacco (which was with Yahoo), we saw that he had gotten a burgeoning interest in journalism, war and Palestinians. So doing an extended reportage tour to Palestine (and Israel) and a comic book series was the logical progression from that. 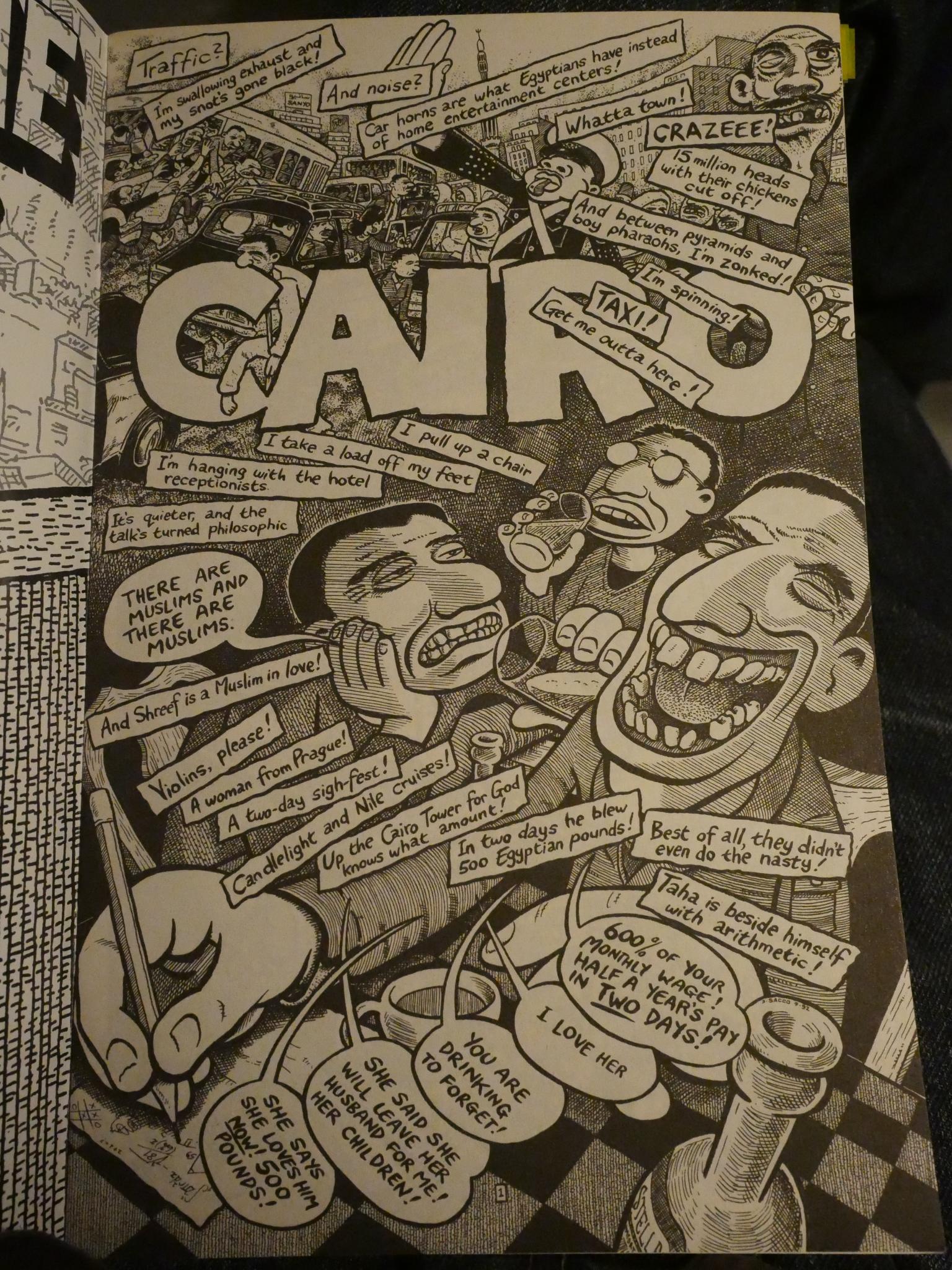 Tackling a serious subject doesn’t mean that Sacco abandoned his crazy foreshortenings and perspectives. This miasmatic maelstrom of words and images reflect Sacco’s ambivalence to the entire project perfectly: One the one hand, he wants to portray the situation honestly and try to bring people’s awareness to what’s going on. On the other hand, he also feels like a tourist that can’t really make any difference. 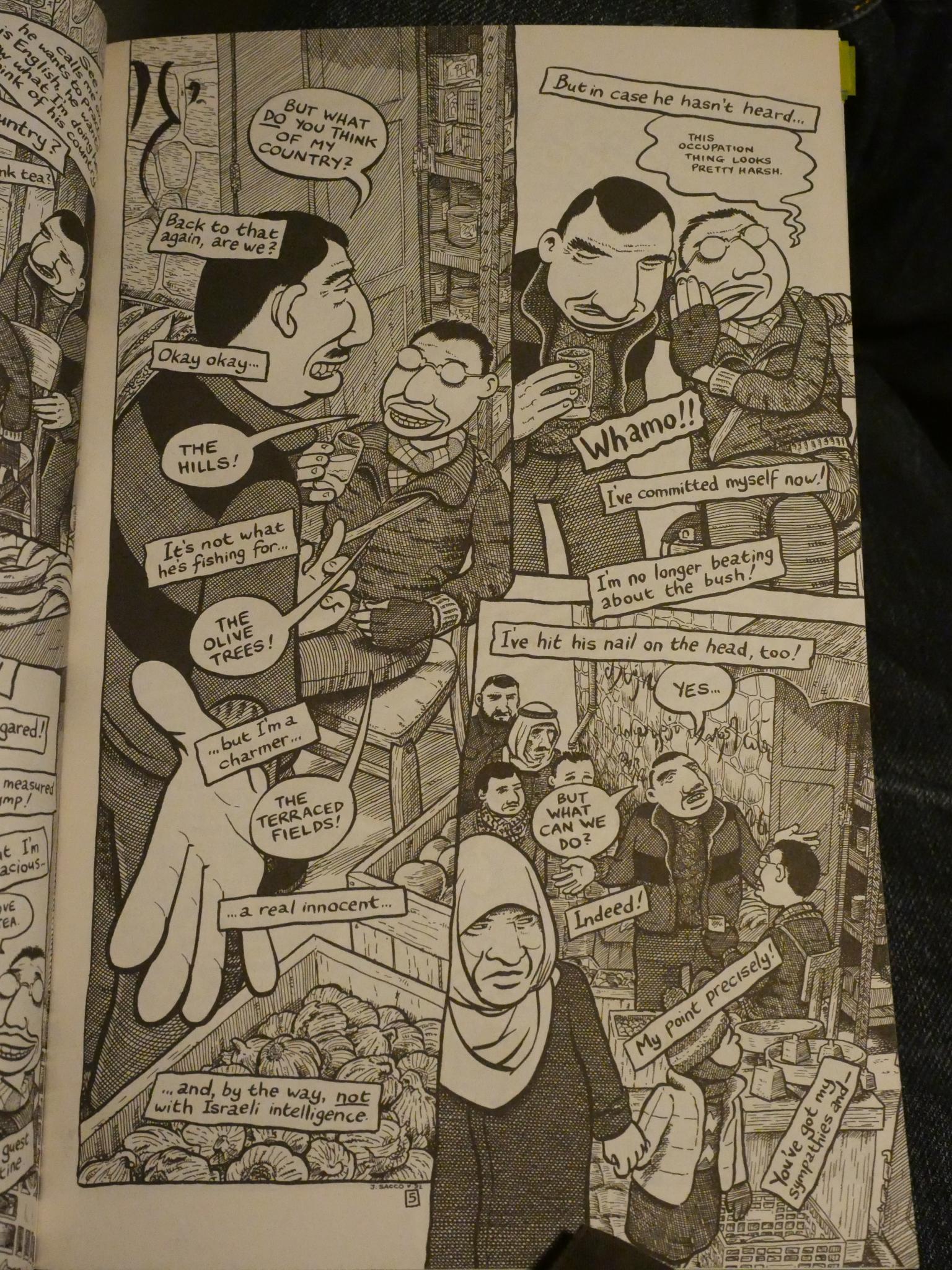 Sacco doesn’t make a secret of where his sympathies lie. Well, not much. 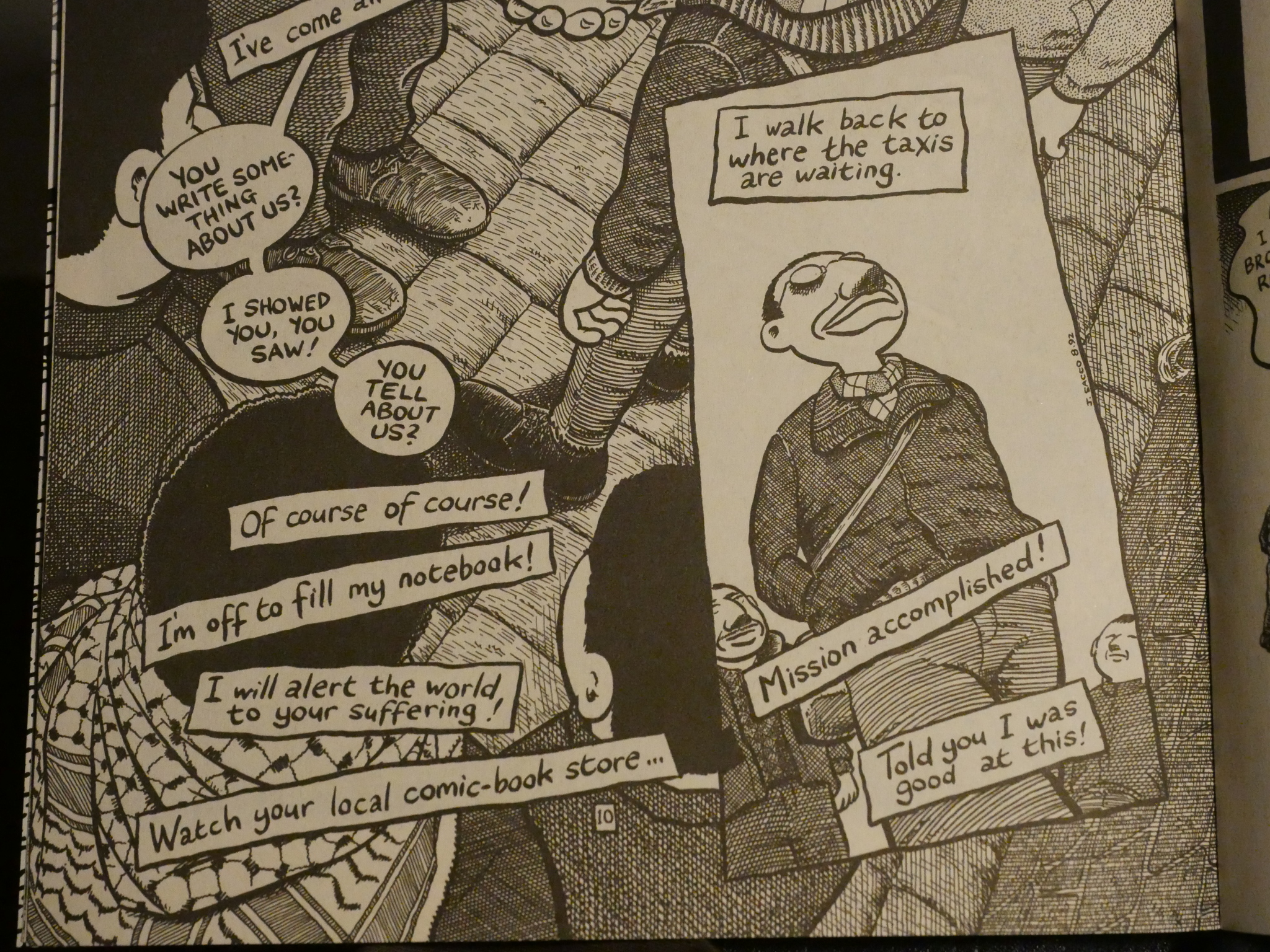 The book is about Sacco, too, where his feelings toward this project shifts between the grandiose and benevolent… 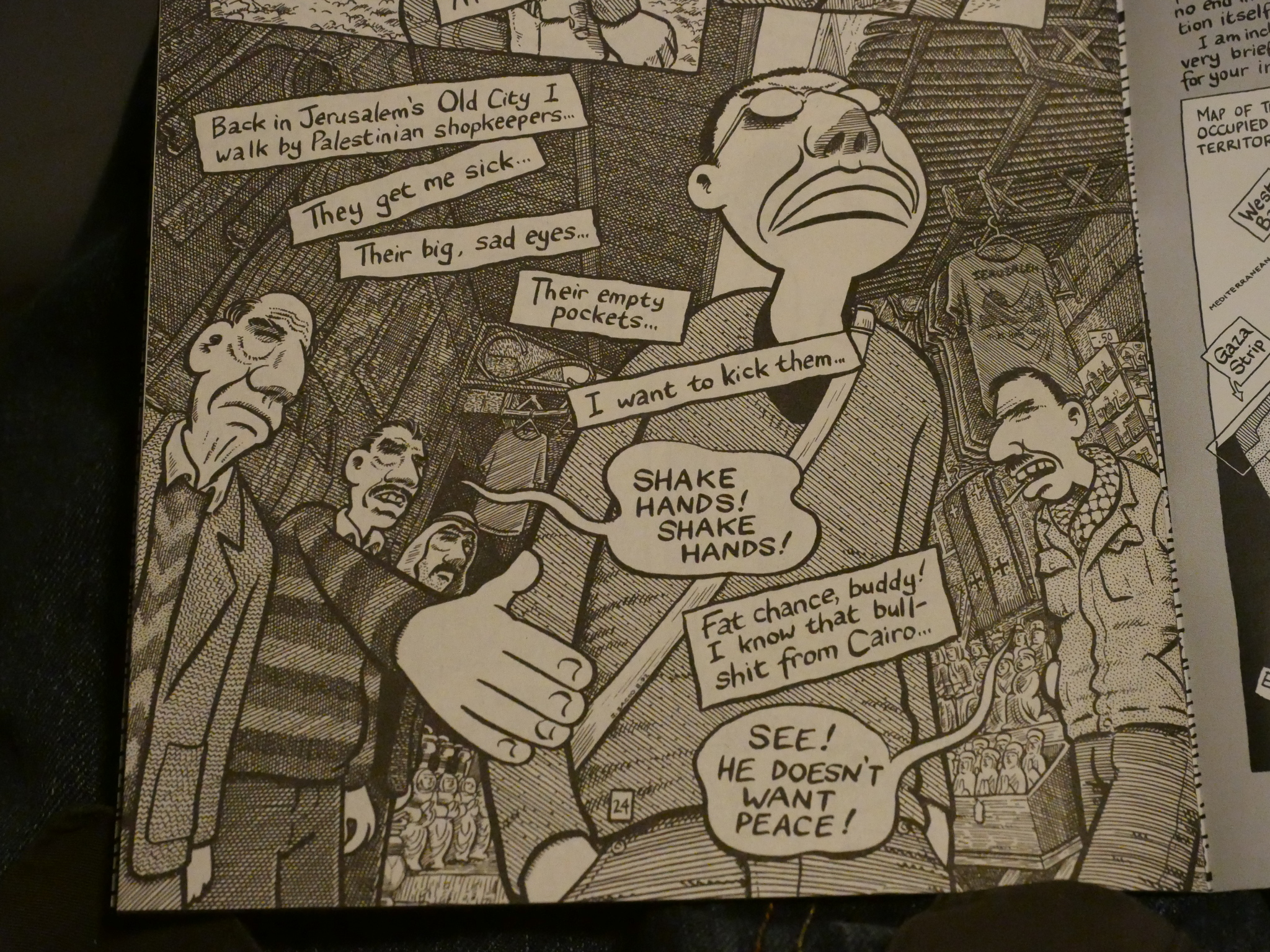 … and a cynical, fed up attitude. This isn’t “objective” reportage, but I think by involving and inserting himself into the narrative all the time gives it a powerful verisimilitude. Or at least the feeling of one. 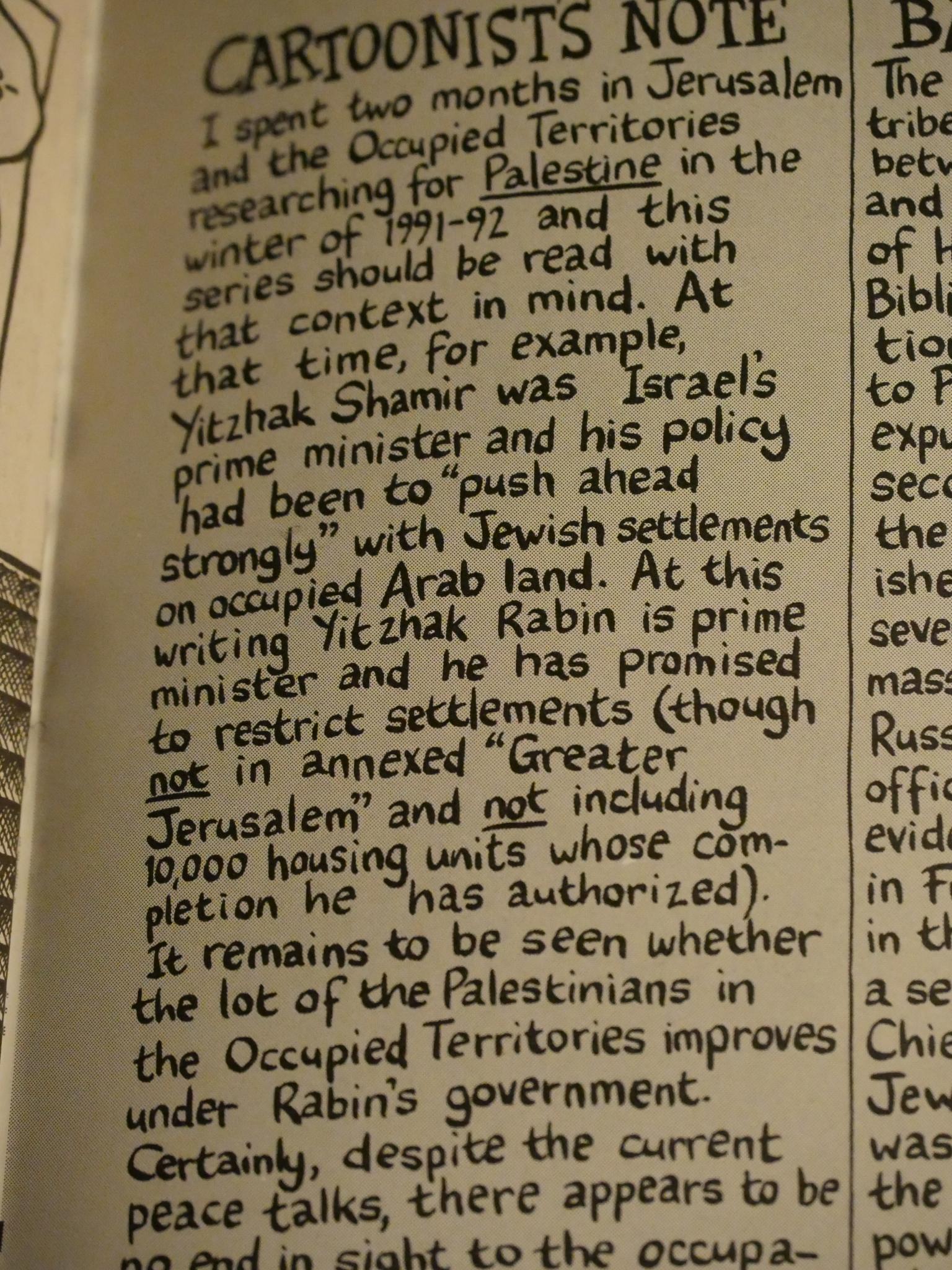 As Sacco explains in the only “note” in this series, he spent two months there during the 1991-92 winter. The first issue was published in early 1993, and the last in late 1995. By that time, what he was writing about was four years in the past, which is the most frequently heard argument about comics as journalism: Drawing comics just takes so darn long. If this had been a prose book, Sacco could probably have had it completed four months after his sojourn instead of four years. 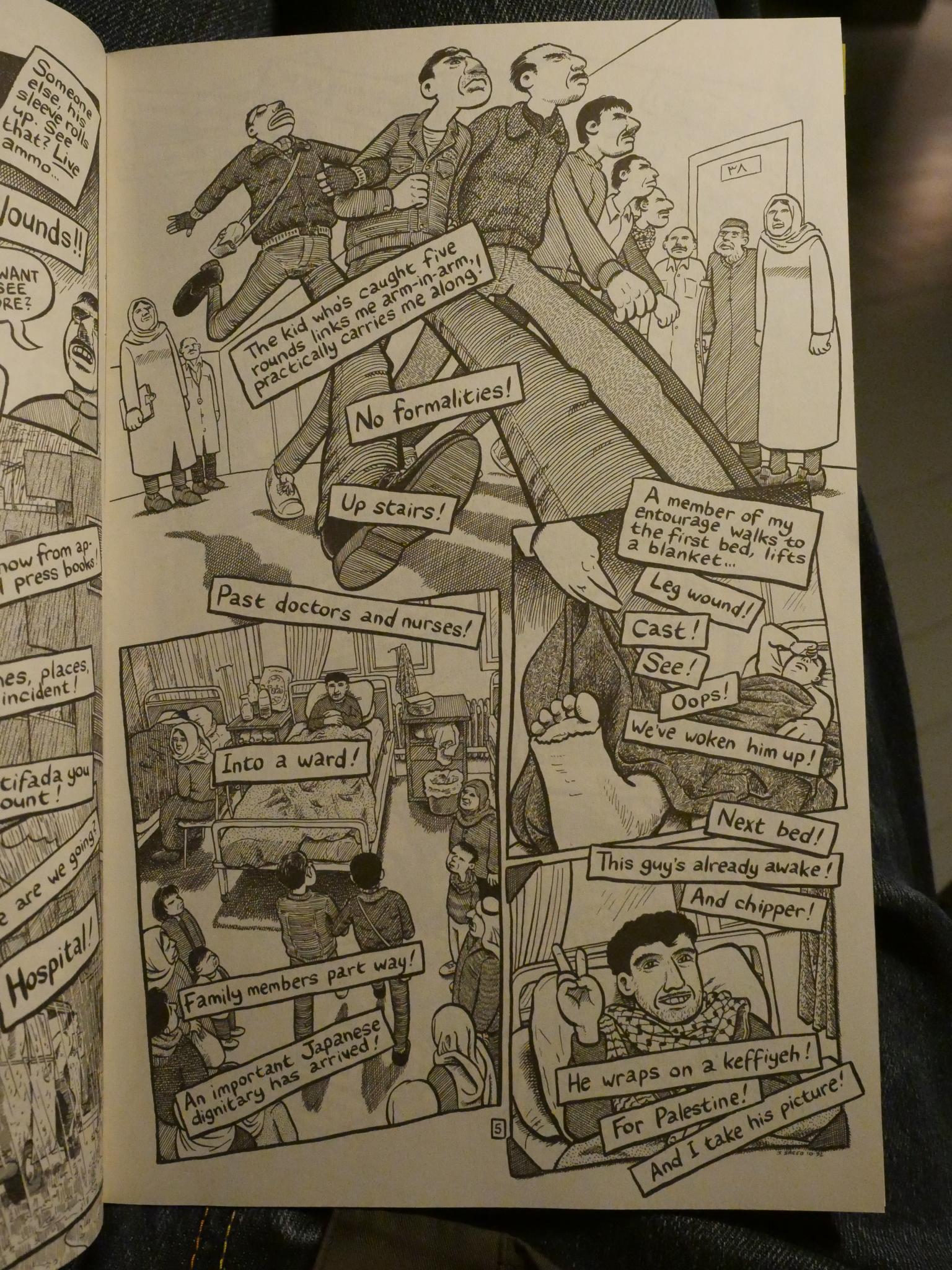 Sacco is just brilliant at depicting these topsy-turvy action scenes: Everything is askew: The perspectives, the captions, the panels, the fish-eye lens effect. It’s also pure comics, with no nods to filmatic techniques. And it’s easy to see why it took Sacco this long to complete the series: The artwork is meticulous, with all that hatching all over the pages. 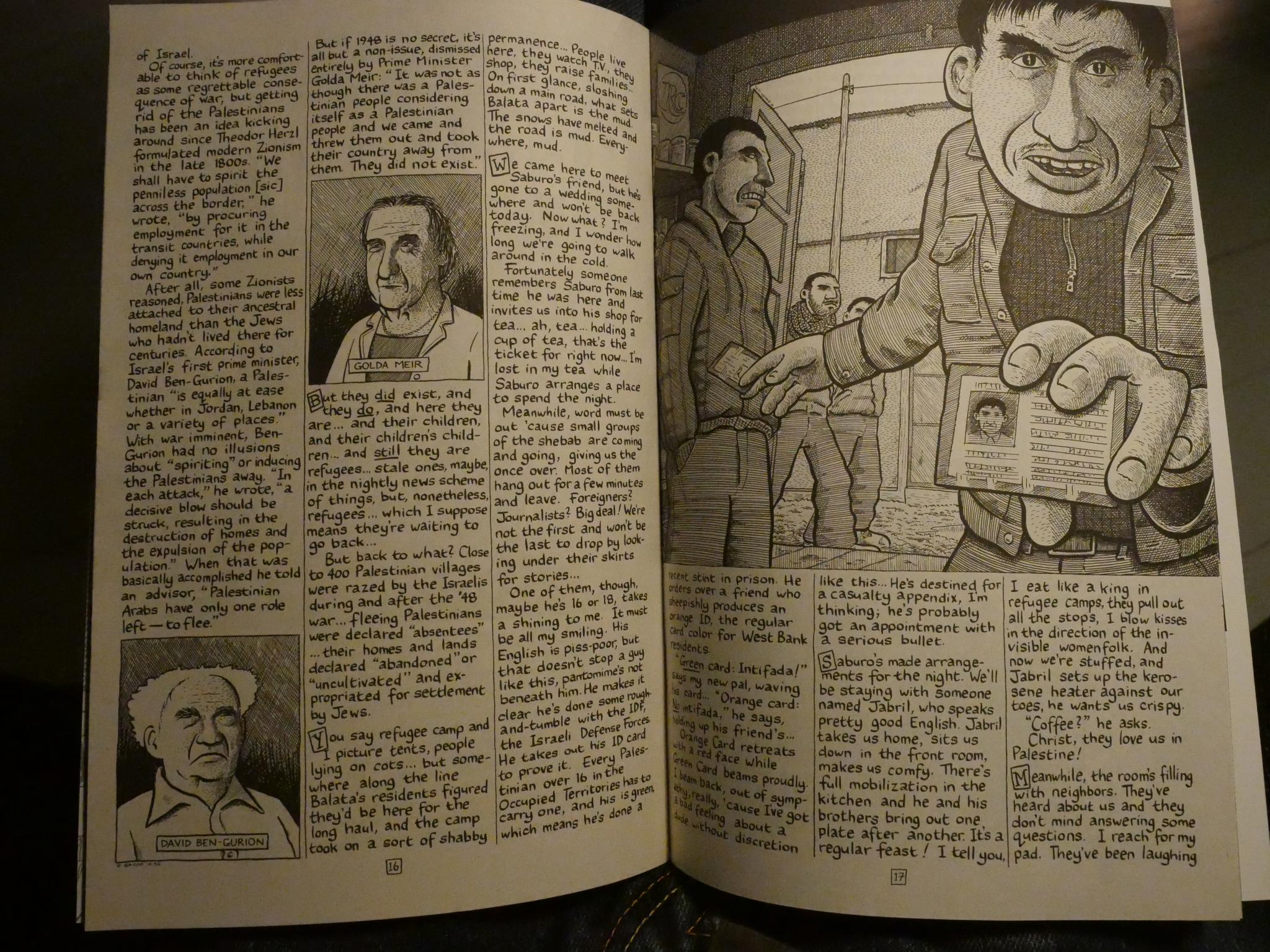 In the second issue, Sacco experimented with putting in a long text section. I could speculate that this might have been done to save some time, and fortunately Sacco doesn’t repeat this in later issues. 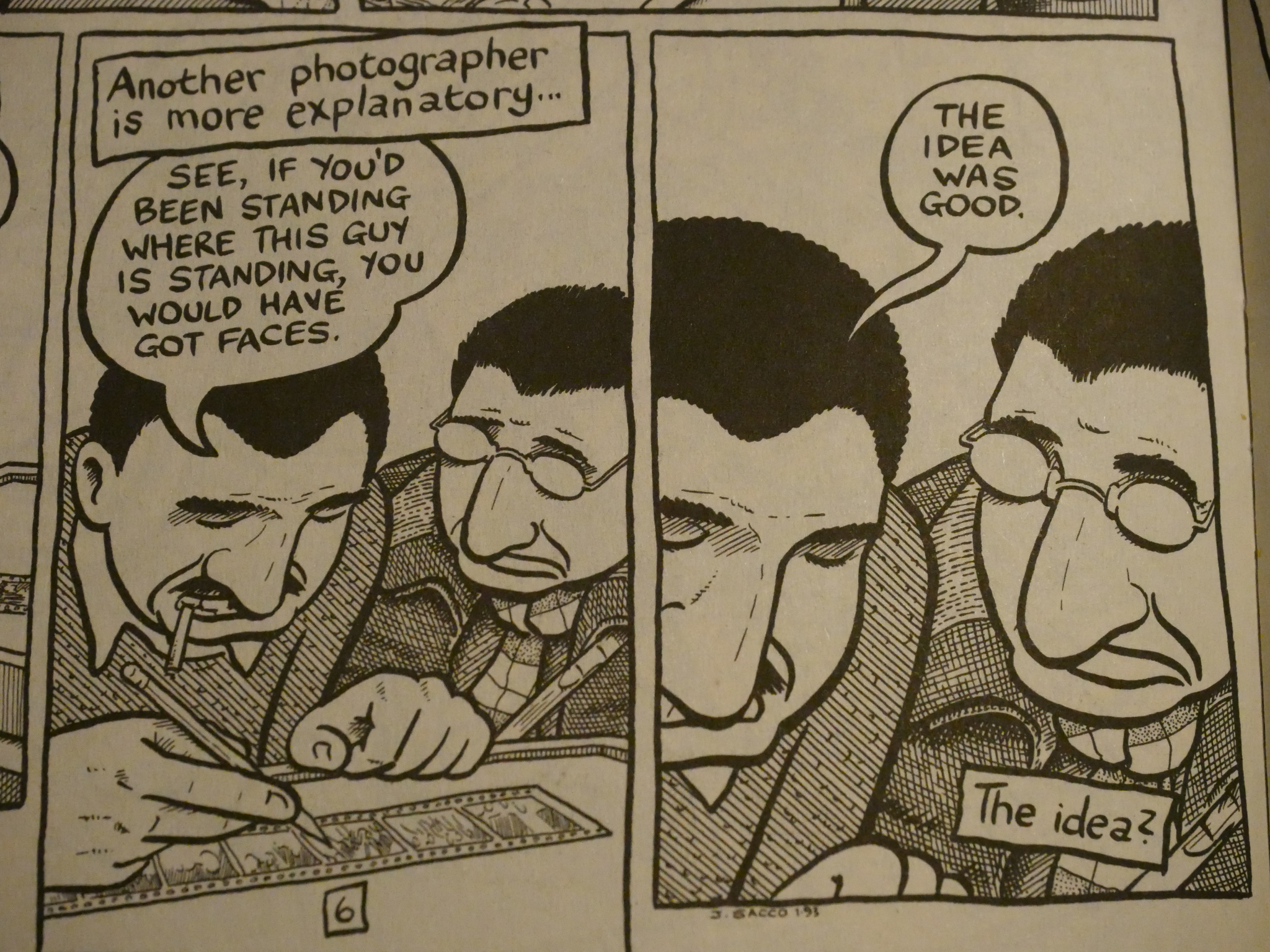 A recurring theme in later Sacco works have been the uneasy relationship he has to “real” journalists. He wants to be one, and he admires them, but they’re way more cynical than Sacco ever wants to be. Here a journalist critiques a photo Sacco took of the police dragging a woman during a demonstration. 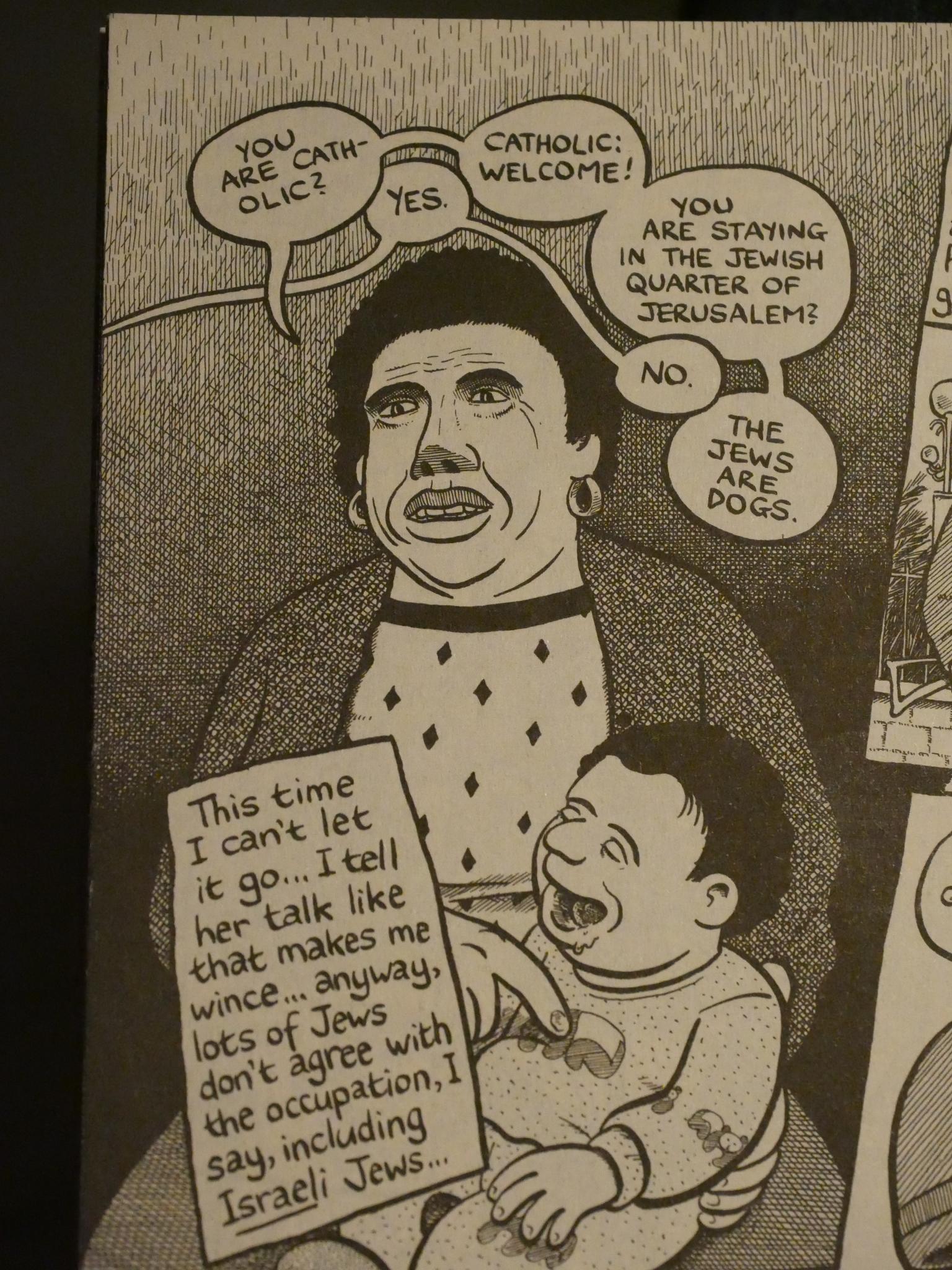 Sacco is often exasperated with the naked and not very photogenic racism the Palestinians have towards the Jews. Sacco’s mission is obviously to humanise the Palestinians (which he does admirably), but he doesn’t shy away from depicting them saying horrible things, either. 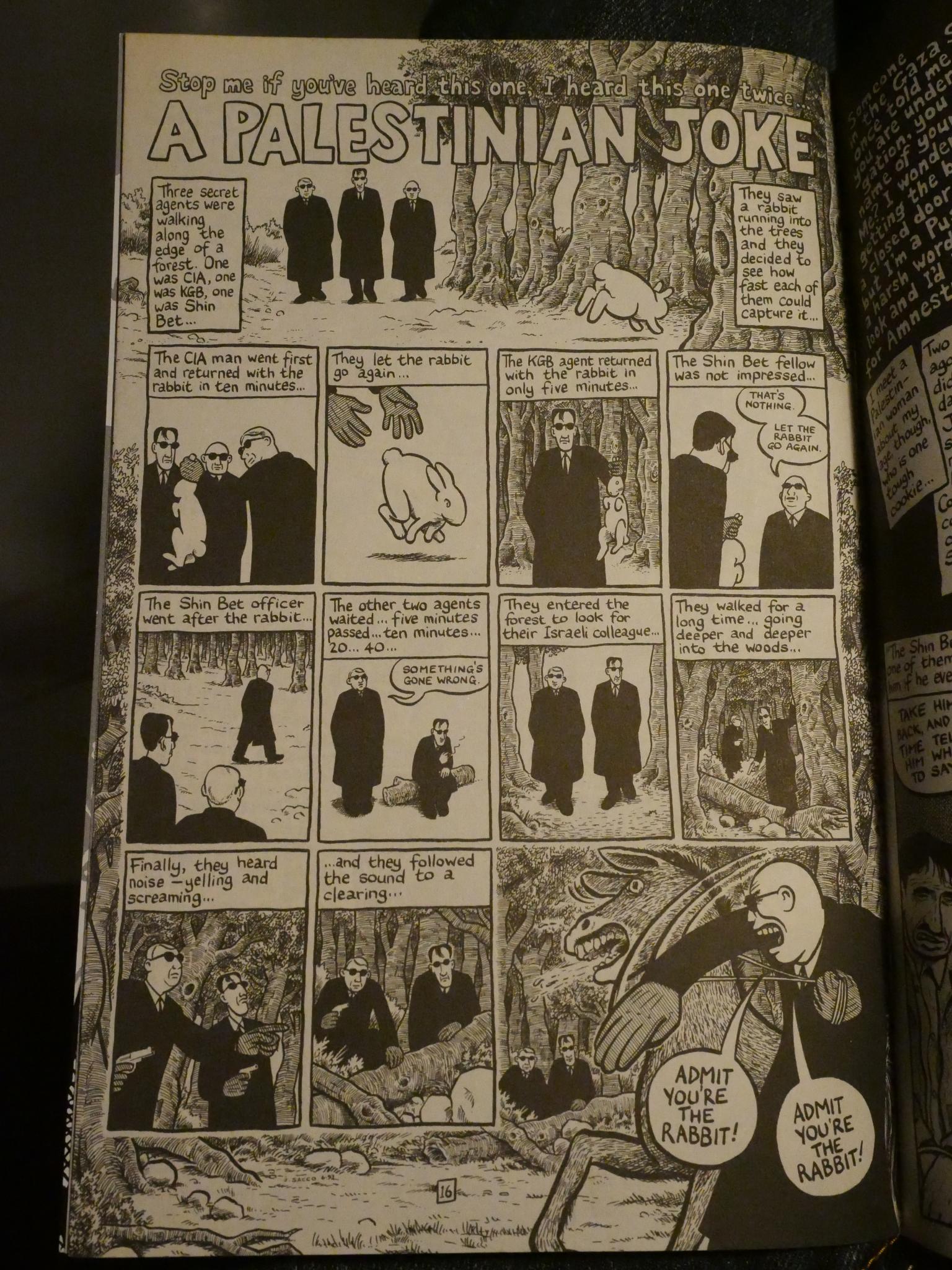 We’re regaled with story after story of Israeli “enhanced interrogation” techniques (i.e., torture), especially at the hands of the secret police. That’s a pretty good joke up there. 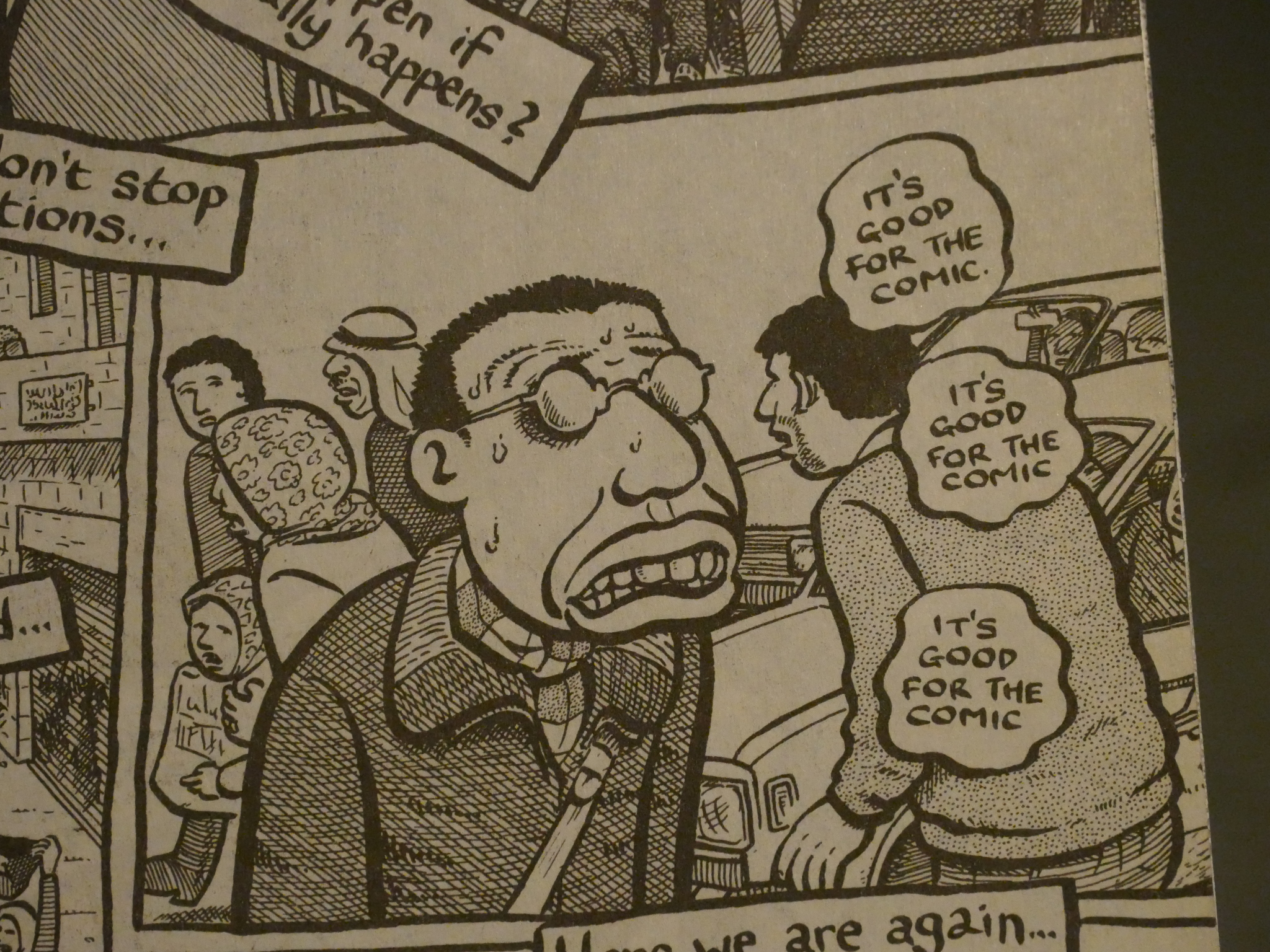 Sacco consistently portrays himself as being not very brave, as here when a demonstration erupts and he tries to force himself to not run away, but instead stay and take pictures. 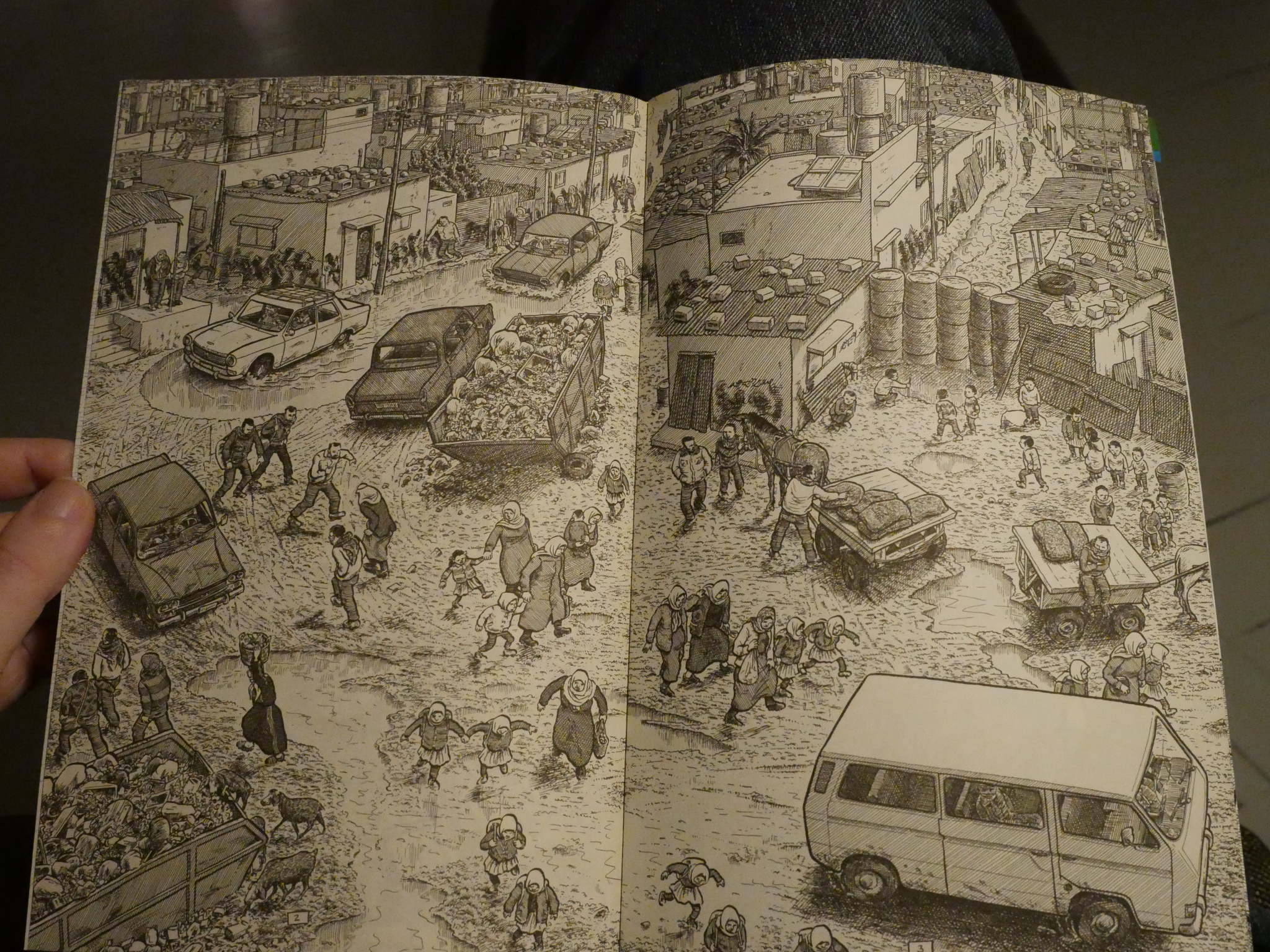 Palestine was originally planned as a six issue series, I think, but in the fifth issue, it was announced that it’s going to be nine issues instead. And Sacco mentions in one of the early issues that he wasn’t going to go into details of the refugee camps that much. But then issues six to eight are subtitled “In The Gaza Strip”, and are mostly all from the refugee camps. 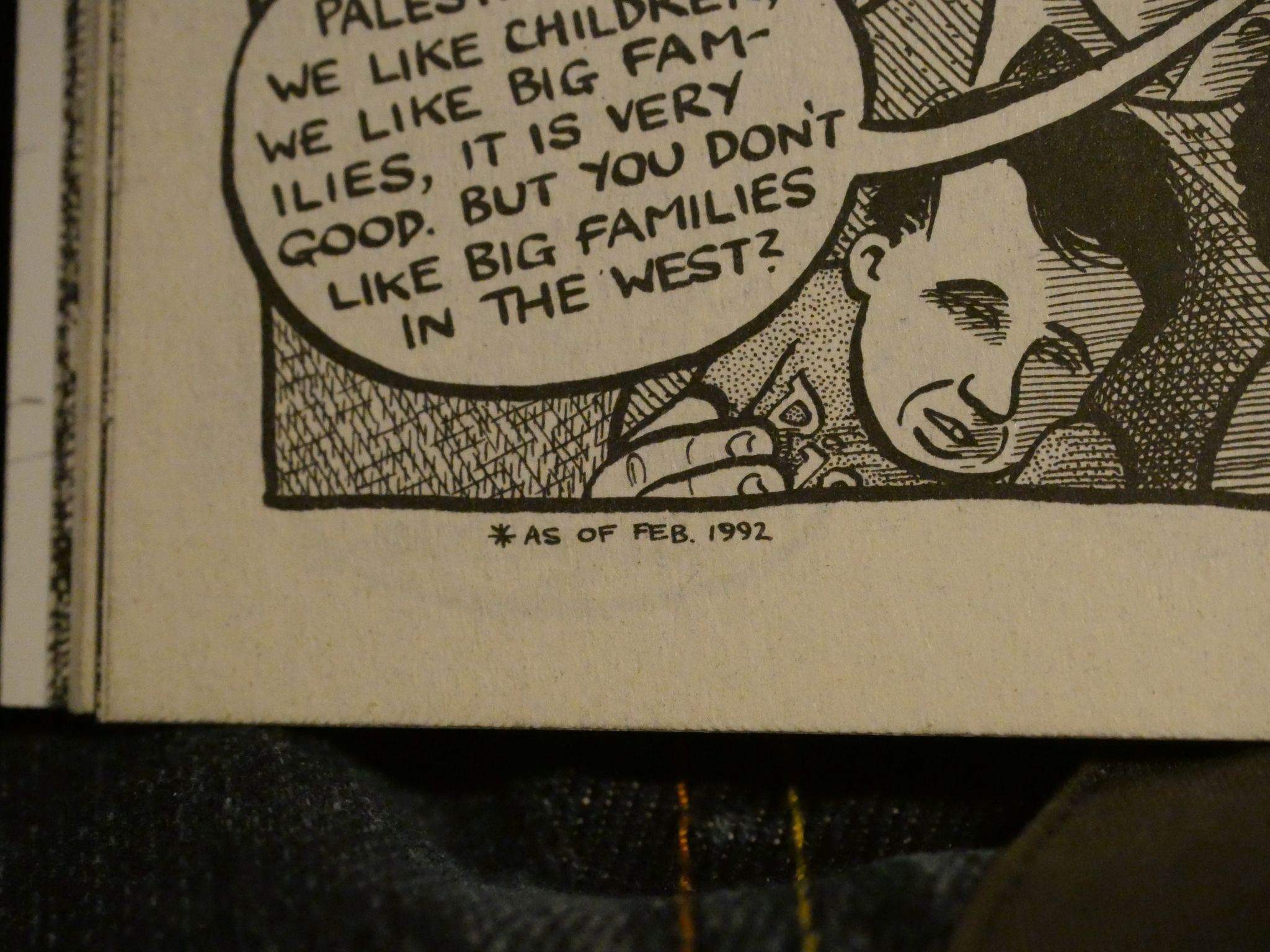 Sacco feels it necessary to mention that the facts he’s reporting the people as saying are from 1992, not the present time. 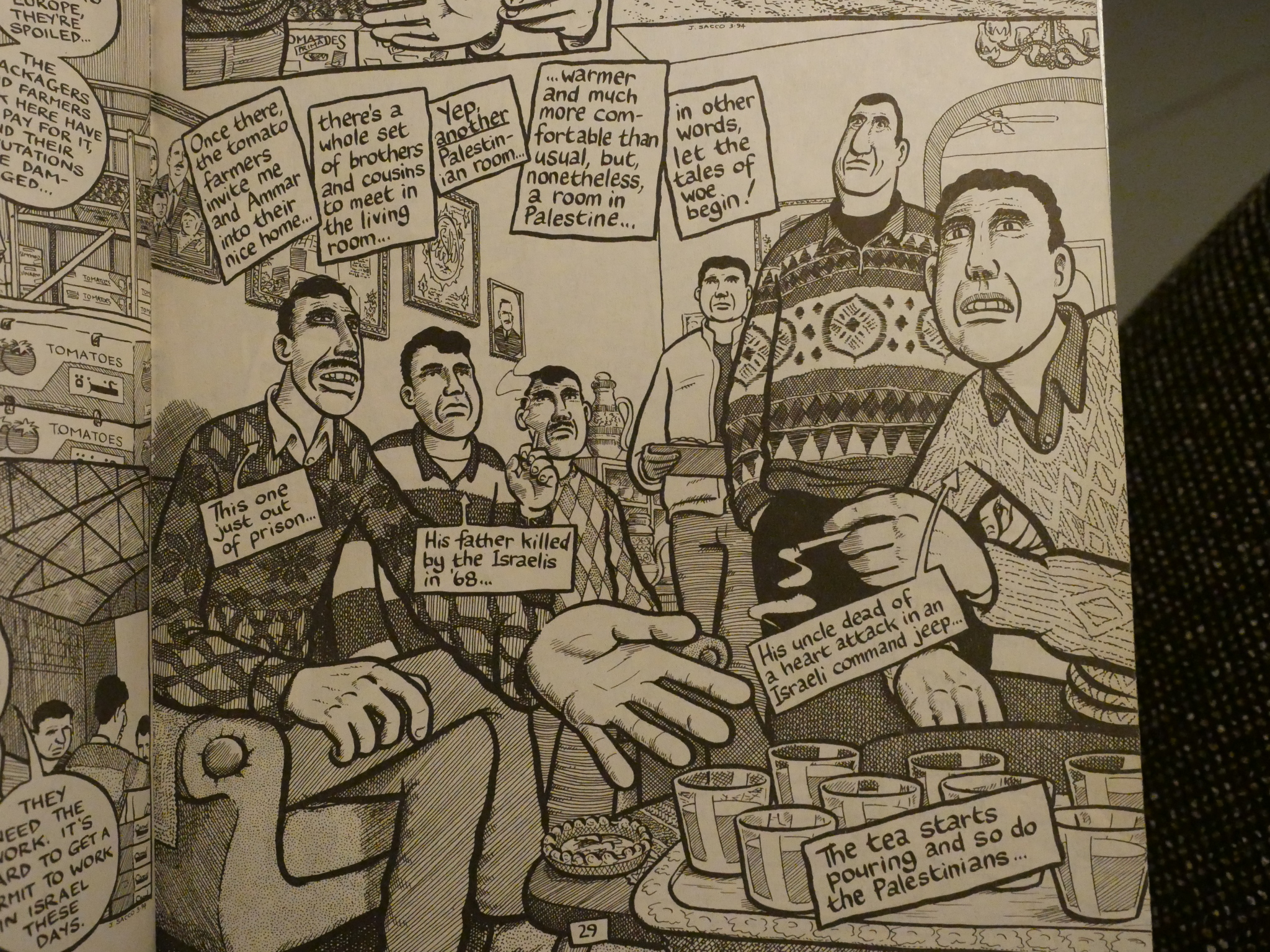 I think Palestine is a powerful work, but I think Sacco is painfully aware of potential problems for the reader: “In other words, let the tales of woe begin!” By the third issue I was starting to think “geez! I’ve got six more issues of tales of abuse to read”. It’s exhausting and it’s relentless. Sacco does include lighter moments, but they’re pretty far and wide. 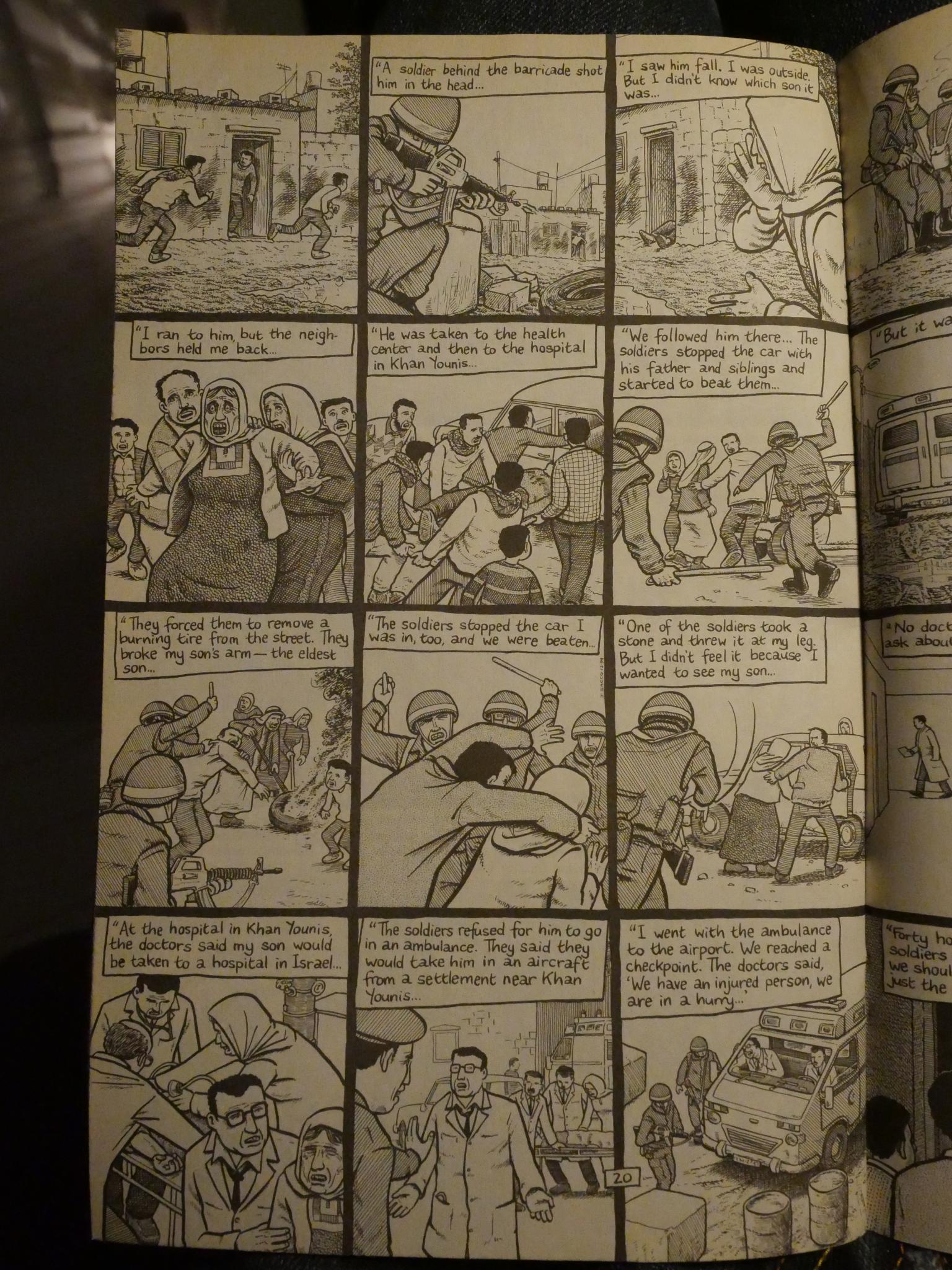 Sacco’s art changes radically for the Gaza issues. Instead of the flowing, exaggerated layouts, it’s mostly on a grid, and a grid that looks ruled, too, and there are gutters and everything. Only the captions are allowed to retain their organic look.

I must admit I was a bit confused by the ending: I thought perhaps that there would be another issue that I had somehow just never bought. But after a few seconds I got it, and it’s a perfect ending.

Palestine has been published in several collected editions over the years and has gotten rewards and was positively reviewed at the time.