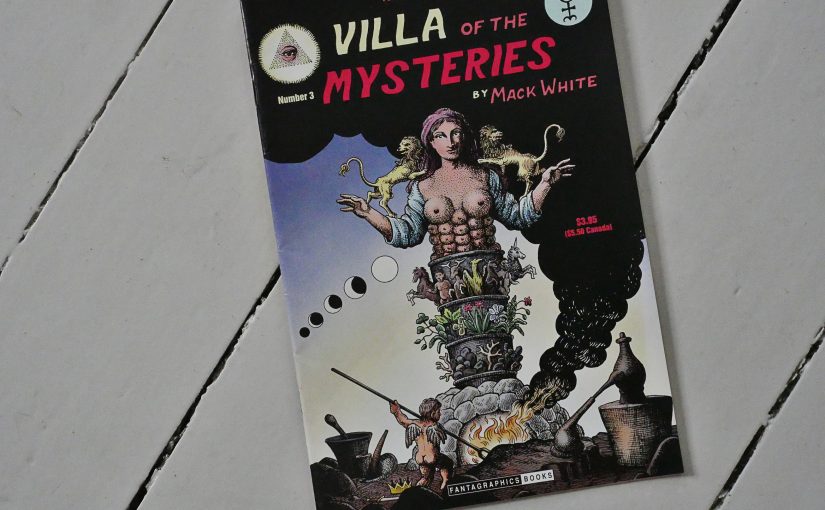 Villa of the Mysteries #1-2 by Mack White. 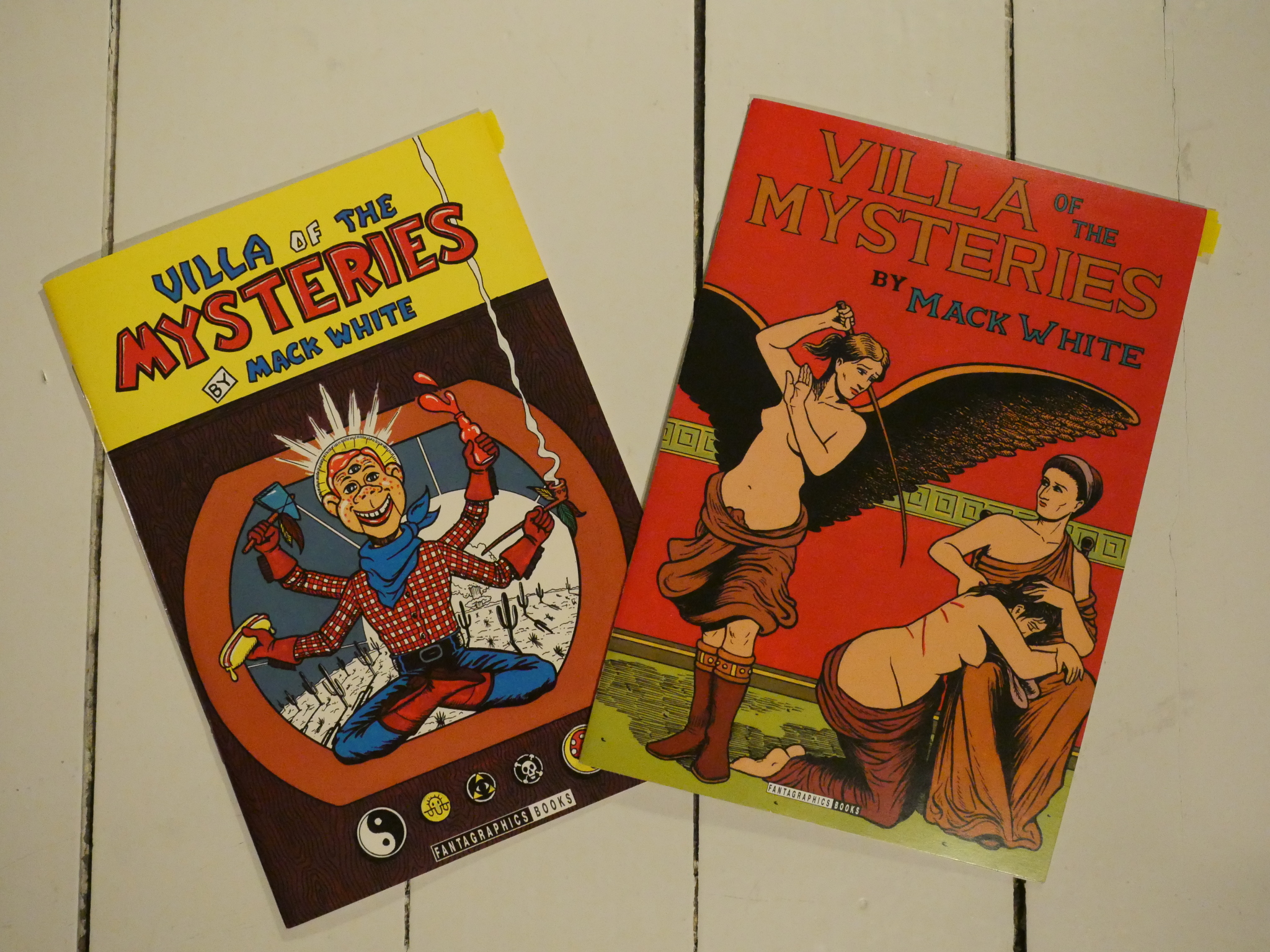 My goal for this blog series was to (re-)read all Fantagraphics comic book comics, but, dear reader, I have to let you know that I failed! Failed, I tell you! I have been unable to acquire the third issue of this comic, even going so far as to try to buy a copy from Mack White himself.

So sorry to let you down, reader.

But what are the first two issues (which I bought in the 90s) like? 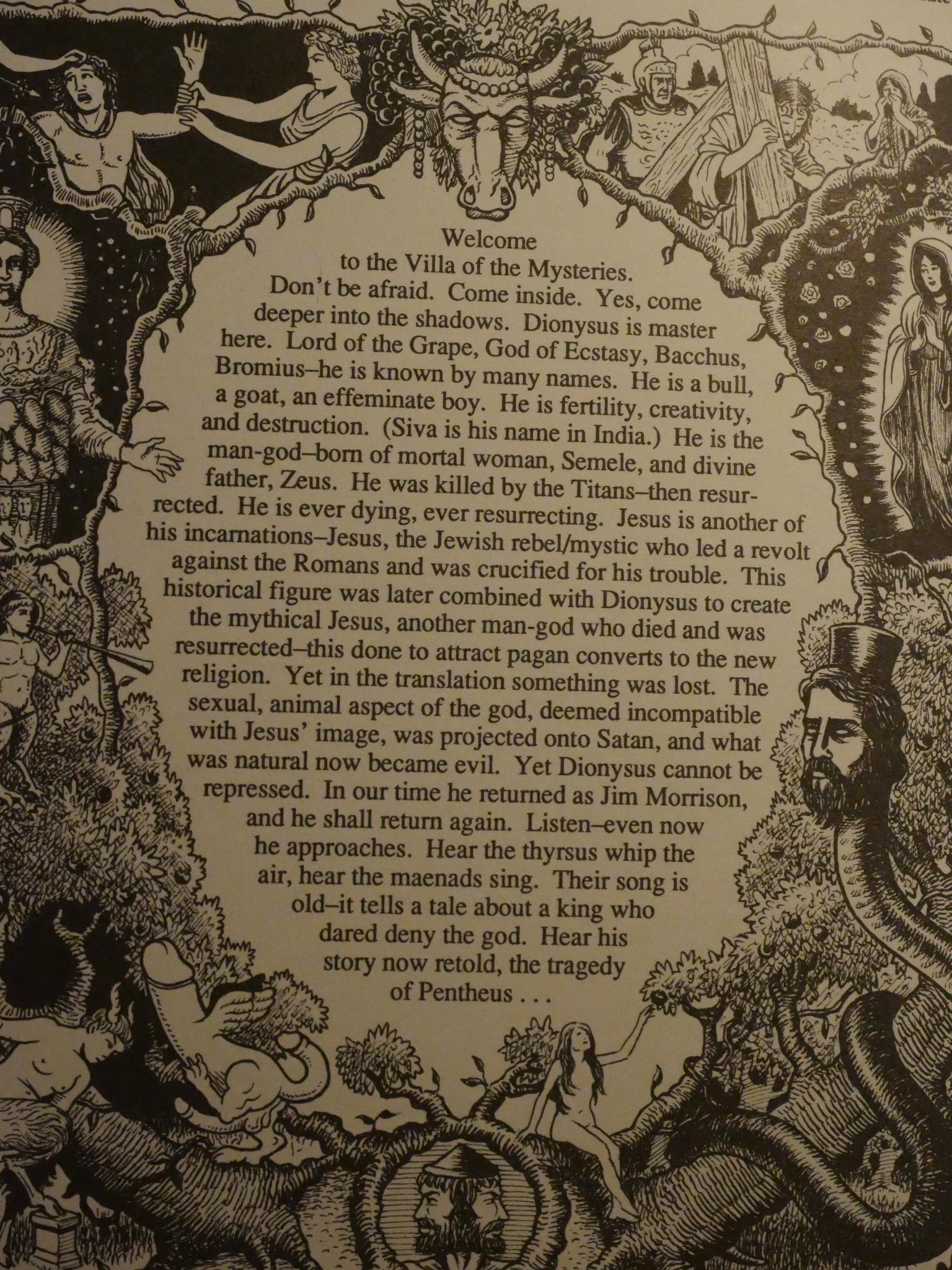 From the name, cover and introduction, it would be natural to assume that this would be about Greek stuff, just like first generation underground artist Frank Stack was doing around this time.

I guess you could sort of call Mack White a third generation underground artist. 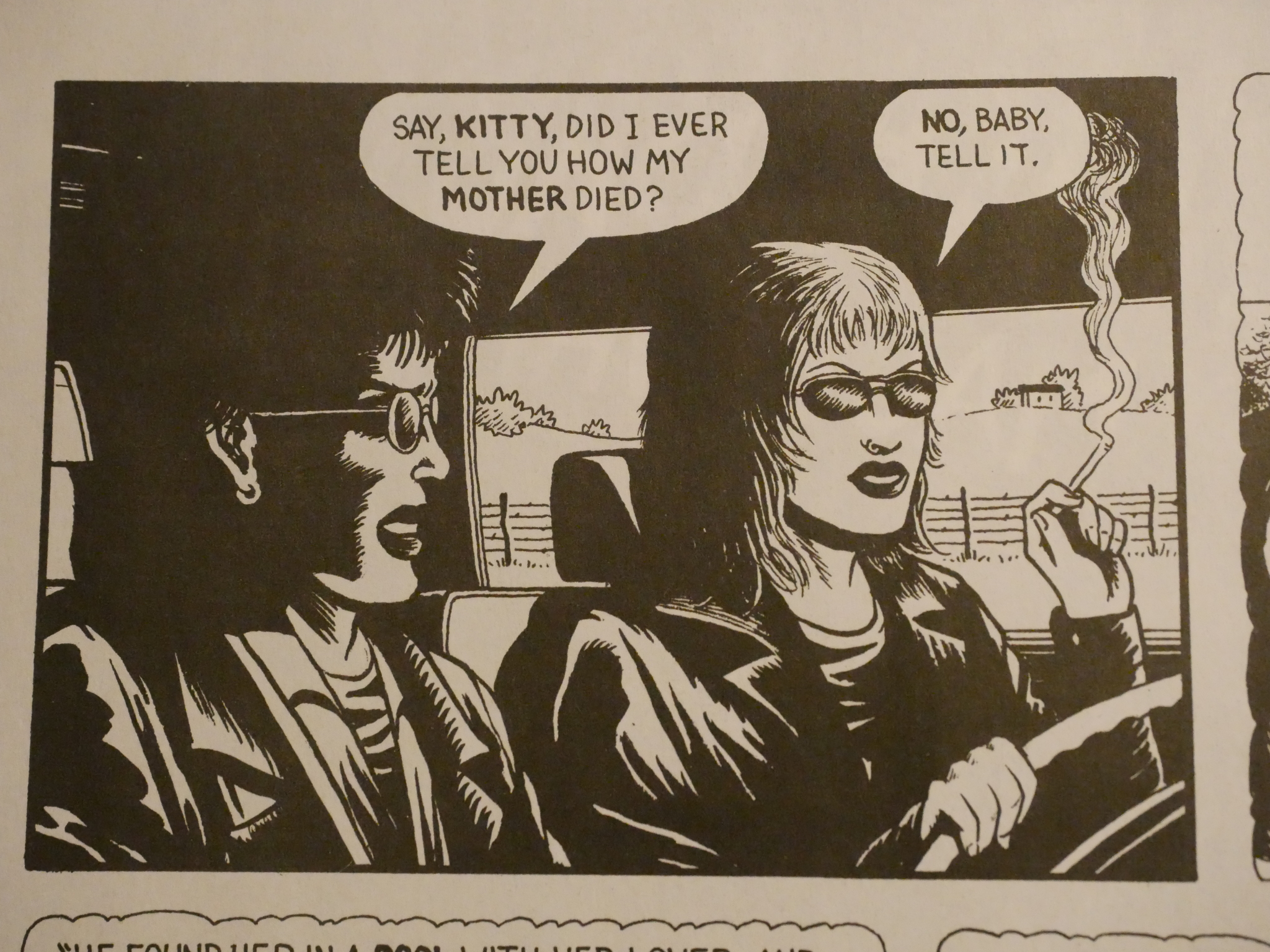 He started off in the 90s, published by storied underground publisher Rip Off Press, and his artwork has an underground comix vibe. It’s rather stiff, but it has a kind of inhuman sheen to it that I find very attractive. 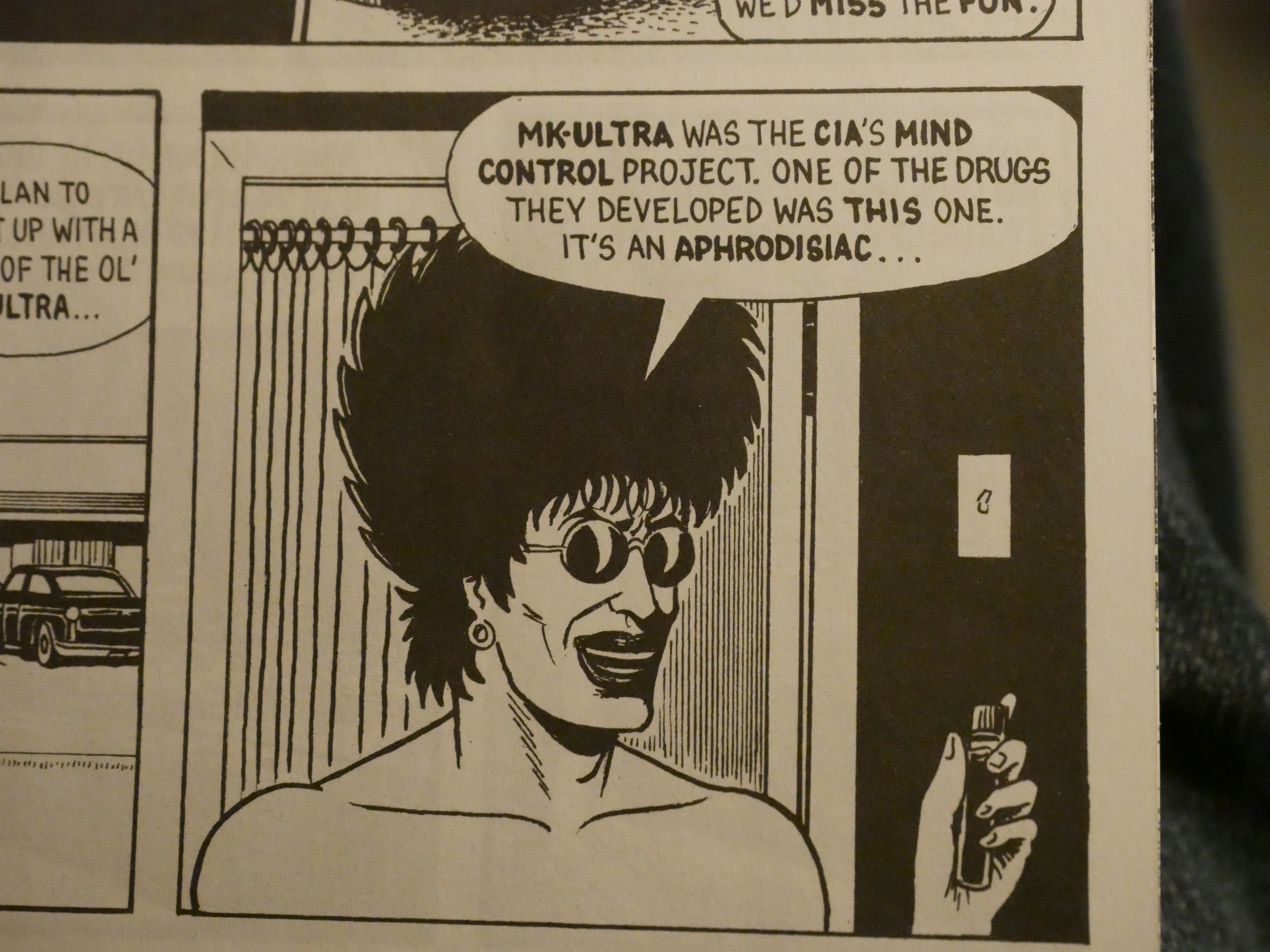 And as with previous generations of underground artists, there’s a lot of drugs (especially psychedelic ones), rock music and sex in his comics. 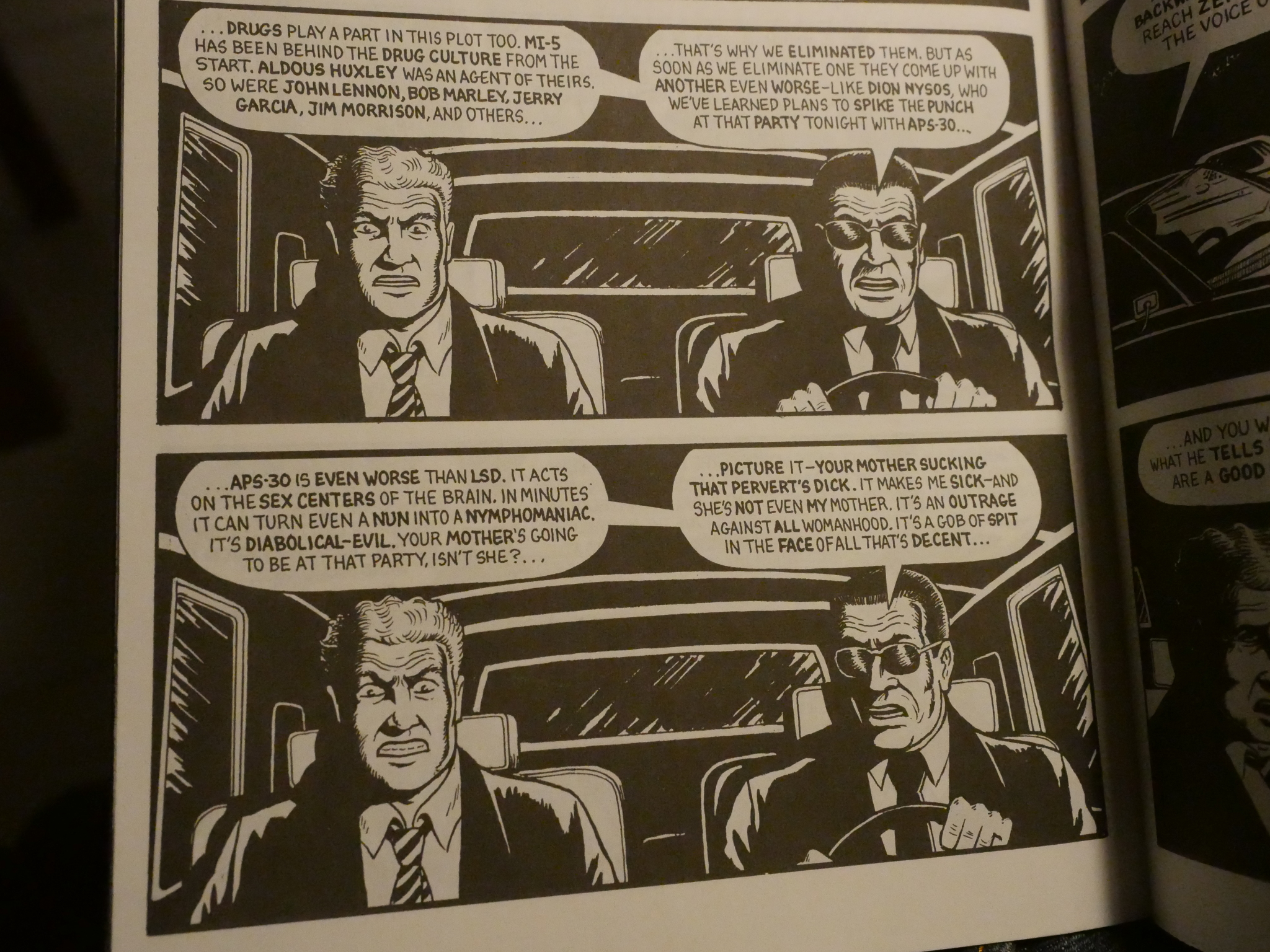 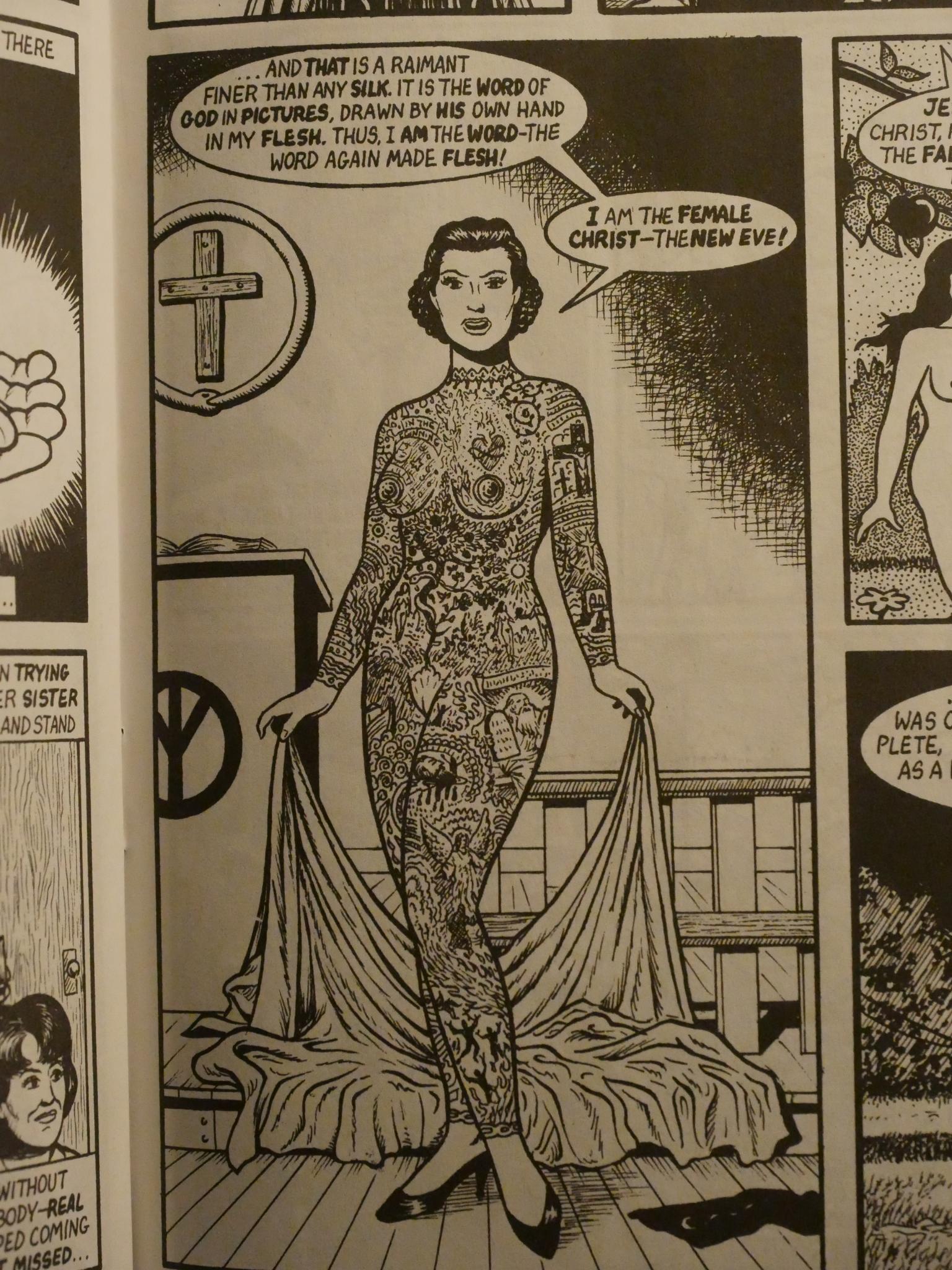 There is also a lot of references to weird religion, and here (as with the conspiracies), White seems to both make fun of them and admire them at the same time.

The first issue is brimming with ideas and concepts, and is rather fascinating. 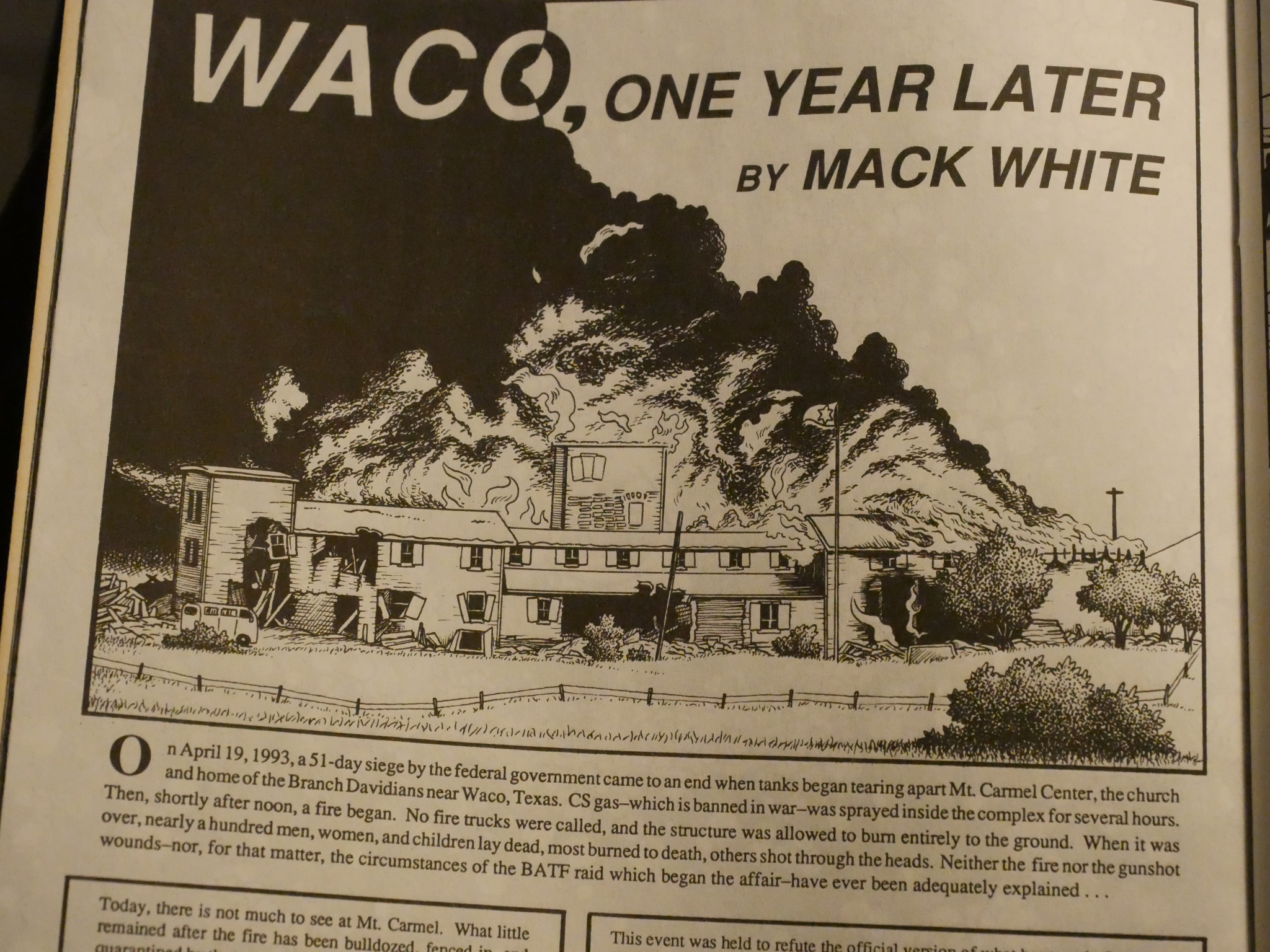 The second issue is a bit different. The centrepiece of the issue is a strip about the Branch Davidians (those cult people who killed themselves in Waco in the 90s, for you youngsters). For the first page or so, I thought that this was going to turn out to be another poke at conspiracy theorists… 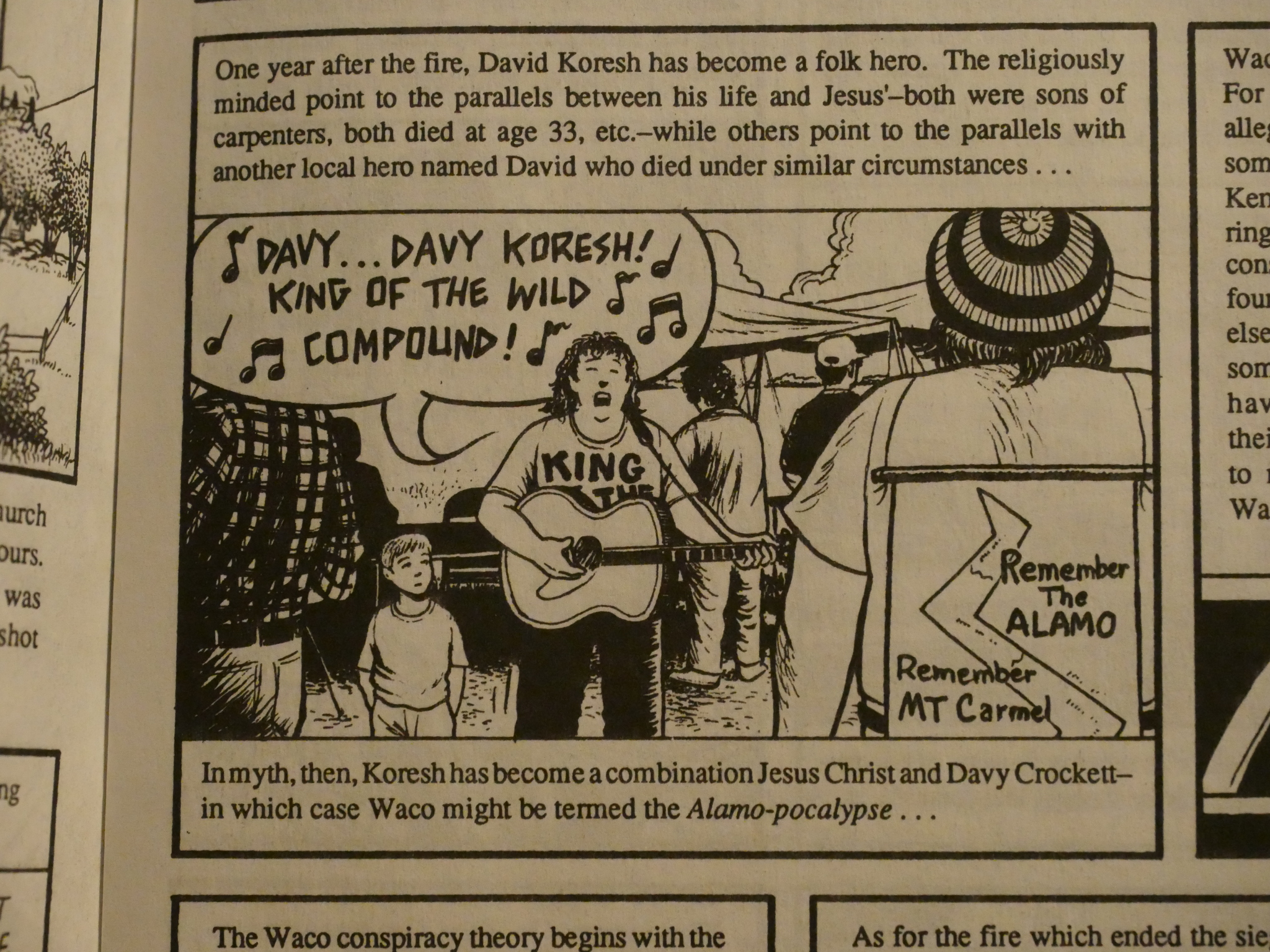 … but no, it’s an earnest piece on what the remaining Branch Davidians think happened, which includes, of course, mass murder by the Bureau of Alcohol, Tobacco and Firearms. Because… 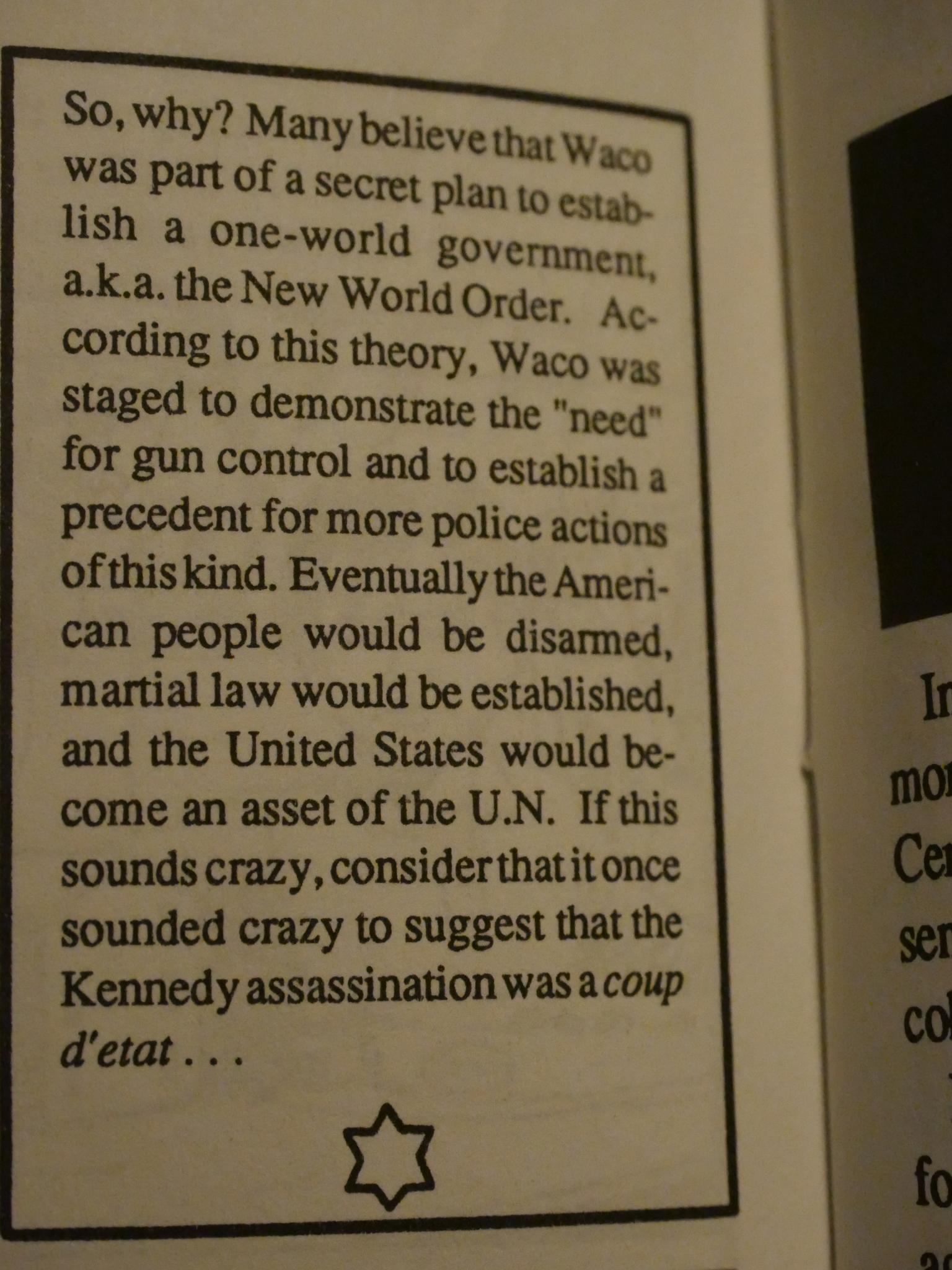 Yes, that… once… sounded crazy… 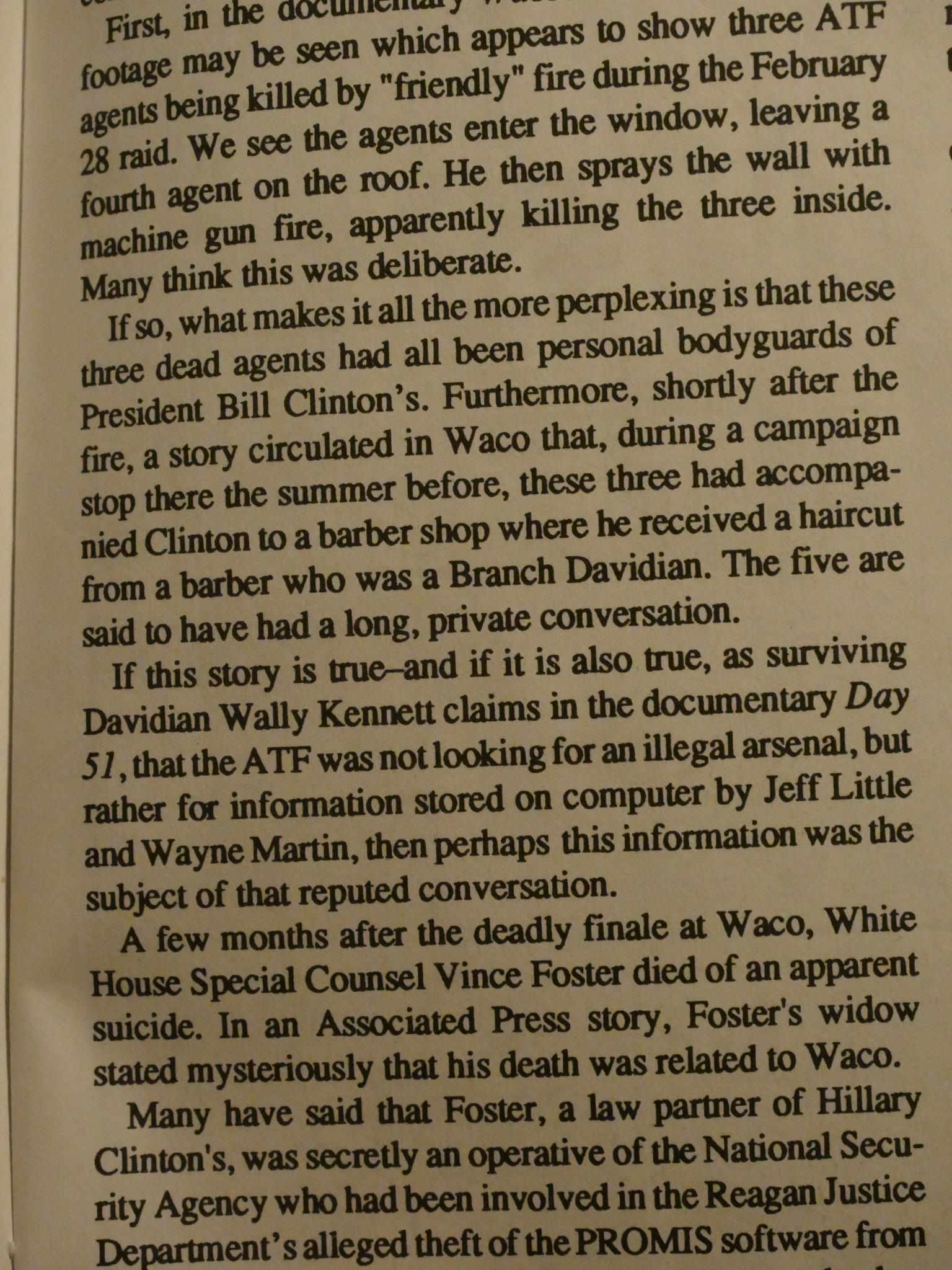 There’s even a postscript where White lays out further possible conspiracies, which includes Bill Clinton getting his hair cut by one of the cult members (at which point I decided that he must be telling this joke with a straight face) and … Vince Foster. And perhaps Koresh was a Mossad agent.

It’s all very perplexing. And now Trump is president. Surely it all ties together somehow. 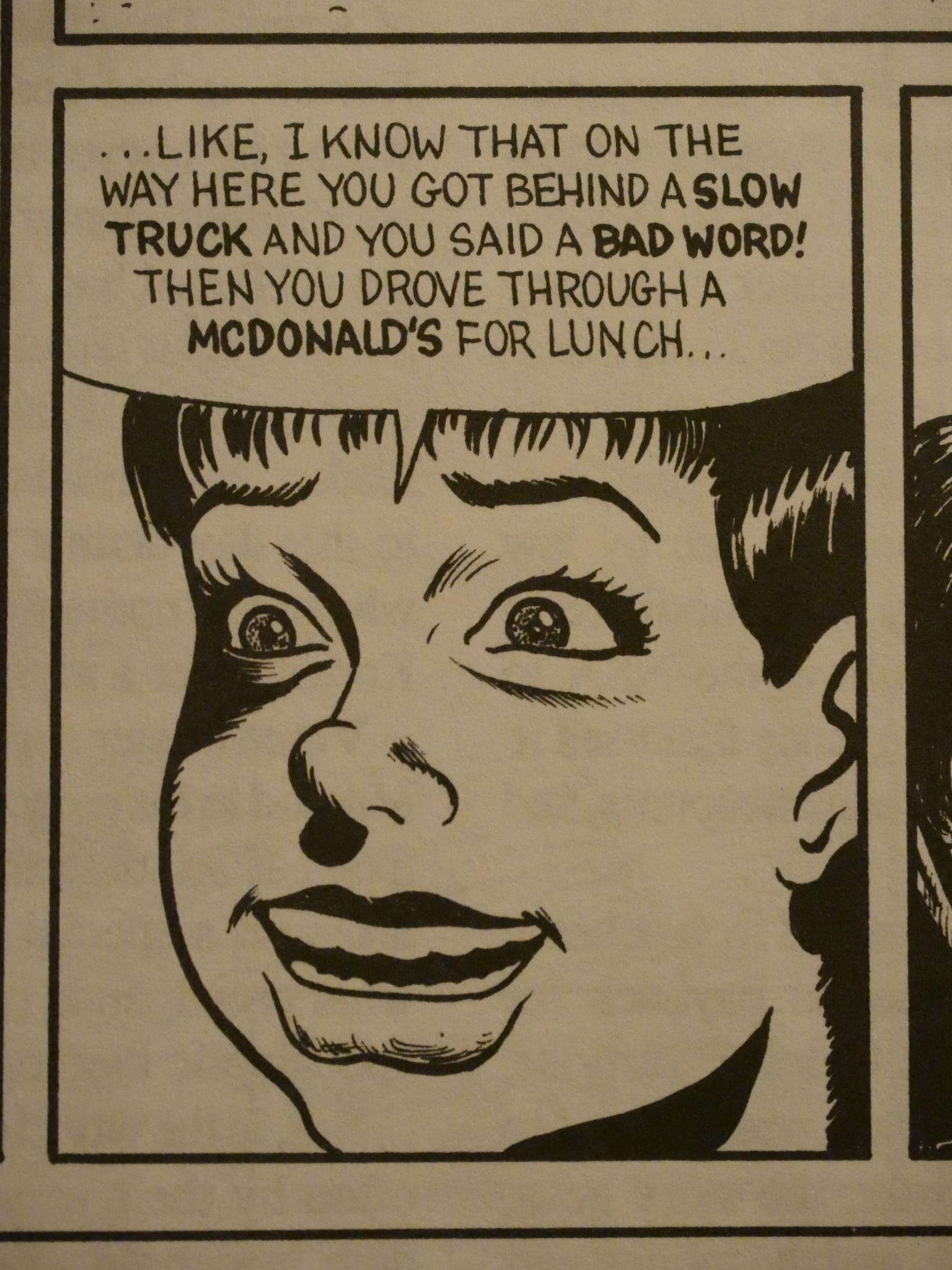 The longest piece in the issue is a kind of riffing off of the David Koresh tragedy, where our heroine (who turns out to be a brainwashed CIA agent) visits a religious compound, lured there by this very Jack Kamenesque little girl. (Another underground connection: Being EC comics fans.) 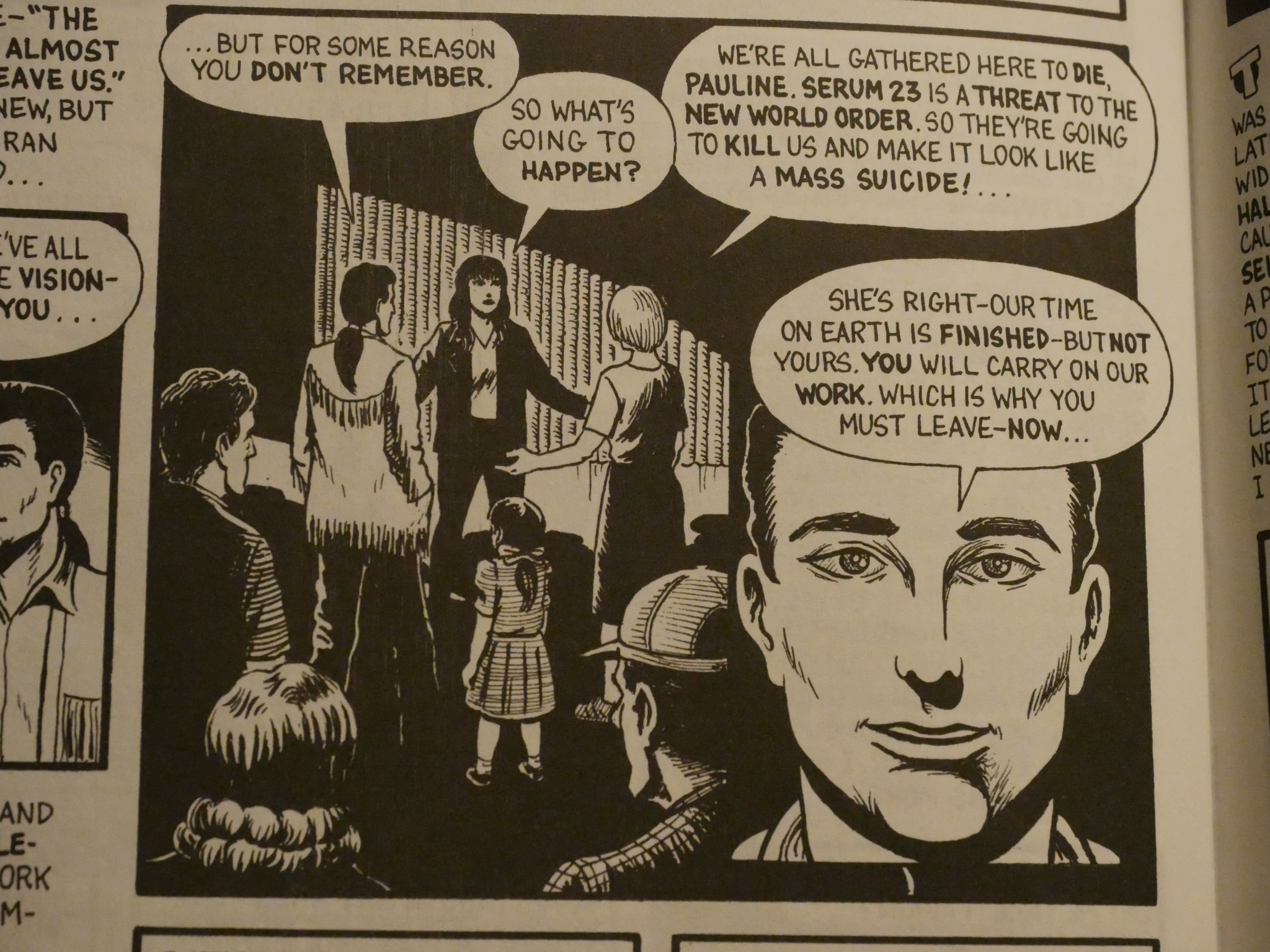 And again the ATF kills them all, but only on this material plane.

I still don’t know whether White is taking the piss or whether he’s sincere (sometimes). Perhaps he doesn’t know either. It’s possible!

Mack White seems to be doing book illustrations now and has a talk radio show.

Look what I got! I had an ebay alert for this since 2016, and I finally got a copy. Just $30. Why is this particular issue so rare? I’m guessing that Fantagraphics didn’t print a lot of copies? Or what? Well, it looks like this is not a radical departure from previous issues. We’ve got a mystical text and some pulp-like comics… Oh, this is the continuation of something from issue #2? I have to admit that I don’t remember this at all… but that’s certainly a striking image.

White’s artwork is as stiff and sharp as I remember: Very EC, very… hm… Kamen? And then it ends — it’s just eight pages, and then it’s over, after they’ve become a perfect hermaphrodite. So it’s a grab-bag of unrelated strips in this issue, not like the Koresh-dominated second issue. We get some office hi-jinx… … and then Rio Bardo, which looks like it’s probably reprinted from somewhere else (the pages use a magazine form factor). It’s about Billy the Kid and pterodactyls and stuff.

Again we get a hermaphrodite, but this time they’re evil. I think that’s a very good panel for out-of-context twittering, right? Go ahead.

The storytelling on the Rio Bardo story is humorously old-fashioned, and with the out-there storyline, it’s perfect.

All in all, a classic third generation underground comic book. Very entertaining and looks great.

But what did the critics think of Villa of the Mysteries?

THE VILLA OFTHE MYSTERIES,
collection of comics by Texas artist
White, takes its name from a famous
frieze in Pompeii, the largest
surviving Roman wall painting in
existence. That ancient work’s real
fame rests on its disturbing
depiction of a Dionysian ritual. In
one section of the frieze, which
White reproduces on the cover of
his comic, a female with large dark
wings is shown whipping a young
initiate, possibly, some speculate,
to prepare her for the marriage bed.
Whatever is going on in that scene,
it is a pretty safe bet that White has
managed to get his finger on the
same pulse.

It’s not so over the top that it be-
comes ridiculous, as did the story
about the nudist nuns. Perhaps what
adds to the tale’s effectiveness is its
ambivalence about Sister Cindy-her-
self. Does she really believe herself
to be the incarnation Eve or is it all
a scam? Does she have the power to
heal, oris she a phony? The story
seems to suggest she is lying about
her divinity, but she is such a pow-
erful presence in the story, and
Brother Harris is so unlikable, that it
is hard not to root for her. I have a
sneaking suspicion that White
wouldn’t half mind us throwing out
Christianity for a religion celebrat-
ing the “New Eve.”

The ambivalence shows up in
White’s art as well. All of White’s
stories are done in a very flat, dead-
pan style, like the cartoon religious
tracts of old (Jack Chick would be
proud). Yet his art reminds me of
nothing so much as those Johnny
Craig ECS, where square-faced men
with short hair and pounds of guilt
sweated over unmentionable crimes.
The problem with Villa of the
Mysteries is that it’s hard to tell just
how seriously White expects us to
take this stuff. It’s hard to read lines
like “Baby, I wouldn’t miss this
orgy for all the hash in Morocco”
without chuckling. In some ways
White resembles Sister Cindy her-
self. Is he trying to say something
about the ties between modern and
ancient religion, or is it all a big put-
on? Both? White keeps a straight
face throughout the entire book, but
I can’t help but feel that he’s barely
raised (and abused) by his hypocritical aunt.

Huh, not very dissimilar from what I wrote up there when…

An interview with White in The Comics Journal #203, page 98:

WHITE: Davidians are not some upstart, so-called
“cult” that appeared yesterday. This is an established
church that has been around since the ’30s. There
aren’t so many of Koresh’s group left now, of course,
because about 87 of them were killed by the govern-
ment. N ot manypeople know it, but there is also a rival
Branch-Davidian church in Waco. I met the minister
ofthat rival church. He was the one who suggested to
me that Koresh was a CIA agent who was manufactur-
ng biological weapons. I don’t think there were
biological weapons at Waco, but I do think the church
was being used as a front by some intelligence agency.
I discuss all this in the latest issue of Villa of the
Mysteries.

Oh! He was serious!

Countless crackpots and visionaries have chal-
lenged the pitfalls Of denial and suppression by the
powers that be, questioning which appears to be
heading for a millennial climax. The comics form is
a superior medium to encompass the breadth ofthis
topic. Villa afunhouse walk through
the End Times Wax Museum.

One thought on “FF1996: Villa of the Mysteries”