Yahoo #1-6, Spotlight on the Genius That Is Joe Sacco by Joe Sacco. 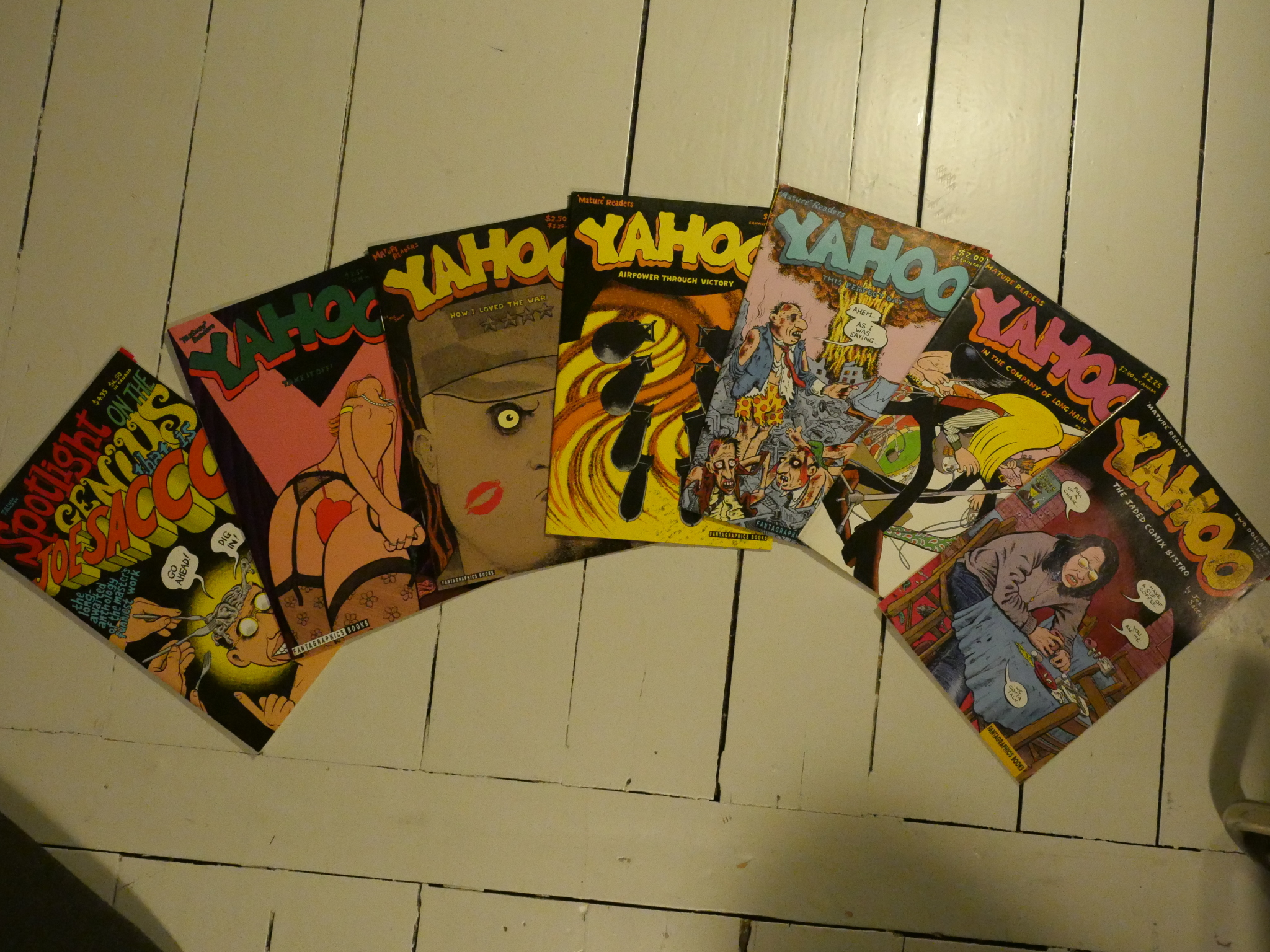 We last saw Sacco in this blog series in Centrifugal Bumple-Puppy (by emacs! When was that? This summer? Feels like several years ago…). Sacco was the editor of this quite successful humour anthology (well, artistically, not commercially, I guess), and he went straight into doing Yahoo. 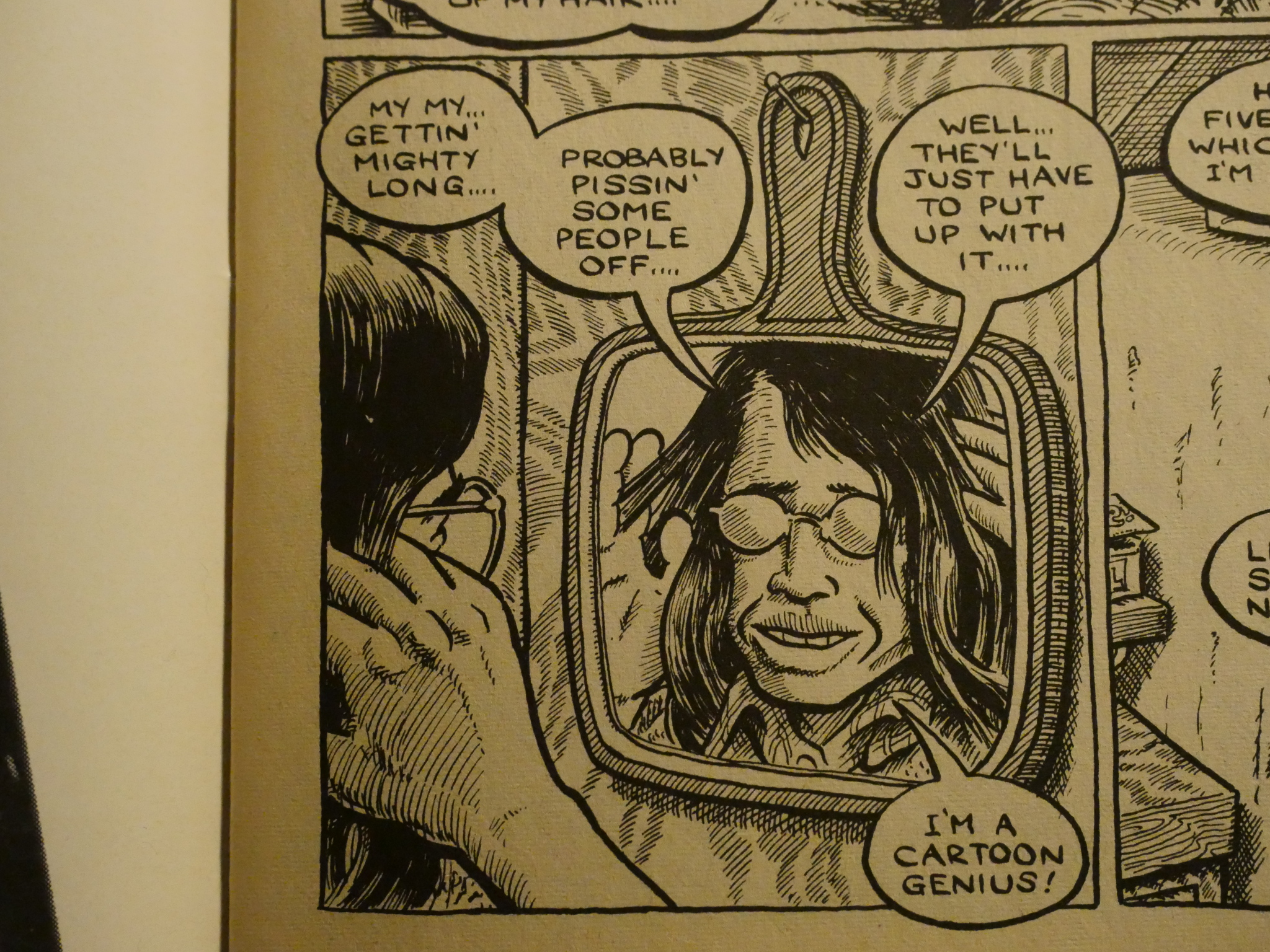 It starts off as a classic single author humour anthology. The first story is drawn in a much more “flowy” and pretty style than Sacco would ever use again, and it’s a parody of autobio comics. (I think in the 80s, parodies of autobio comics outweighed autobio comics 10:1. I actually have the numbers to prove it!) 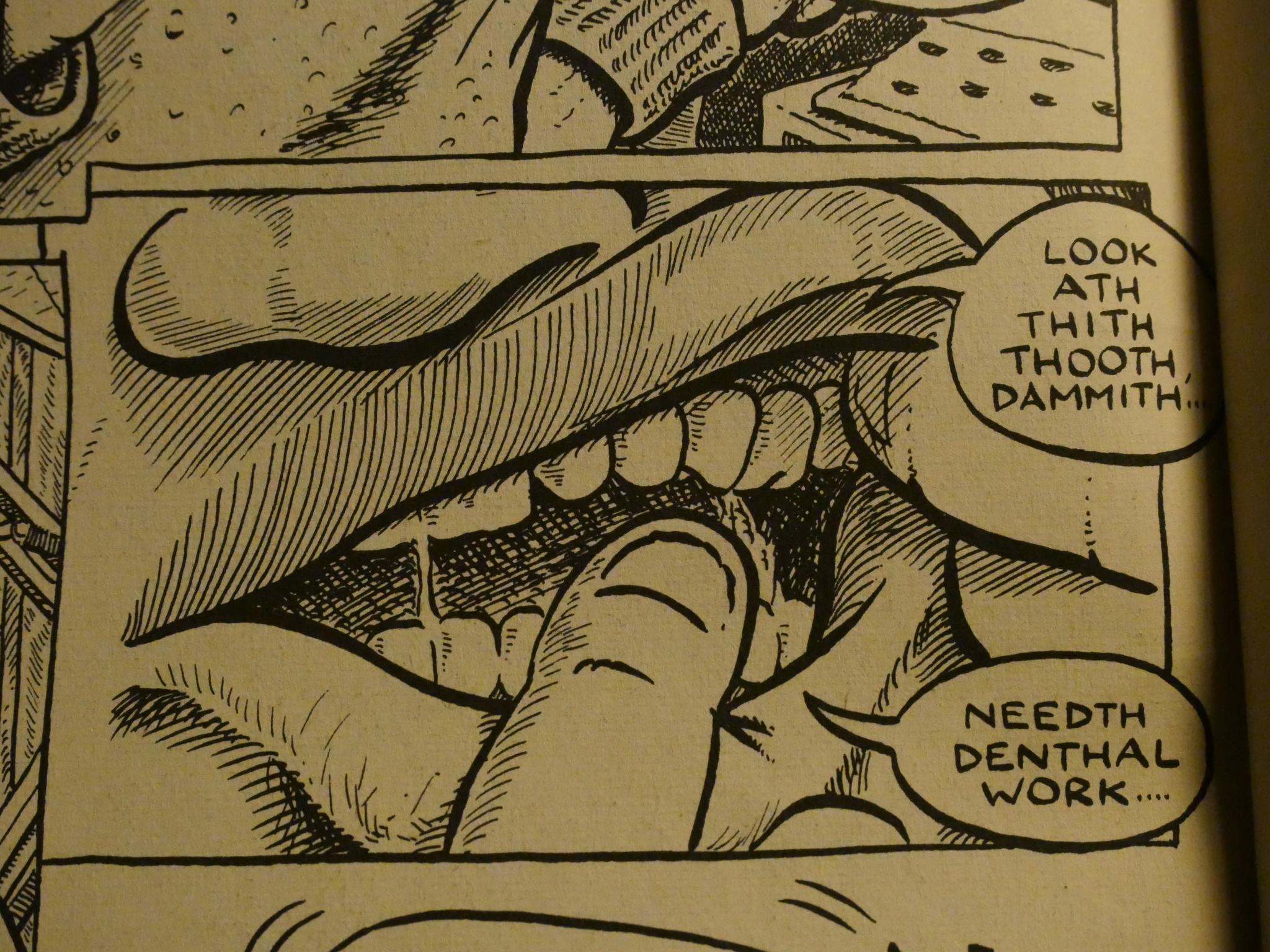 I’ve always enjoyed Sacco’s work: He’s funny and intelligent, and I think his artwork is expressive and sometimes beautiful. But I think I’ve read like dozens and dozens (OK, two) of people saying that they’re repulsed by his artwork, and they usually mention the way he draws lips. And it’s true, his lips (I mean the way he draws them, I don’t know what his own lips look like) are full and fleshy. 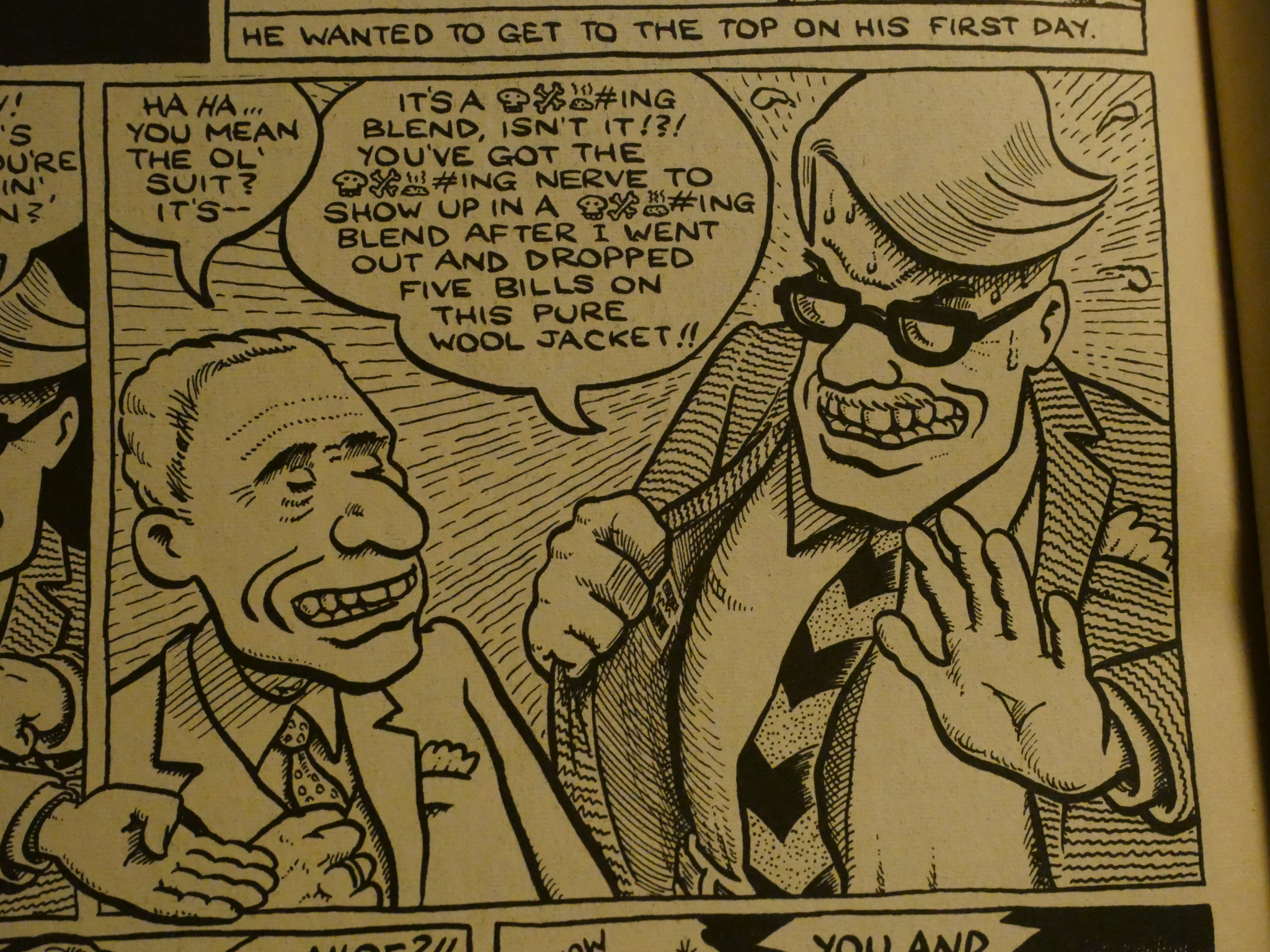 And there is something sorta grotesque about his faces and dizzying perspectives. And so much sweating! Most panels are pretty moist.

The panel above is from another recurring theme in Sacco’s work: The fascism underlying corporate culture. 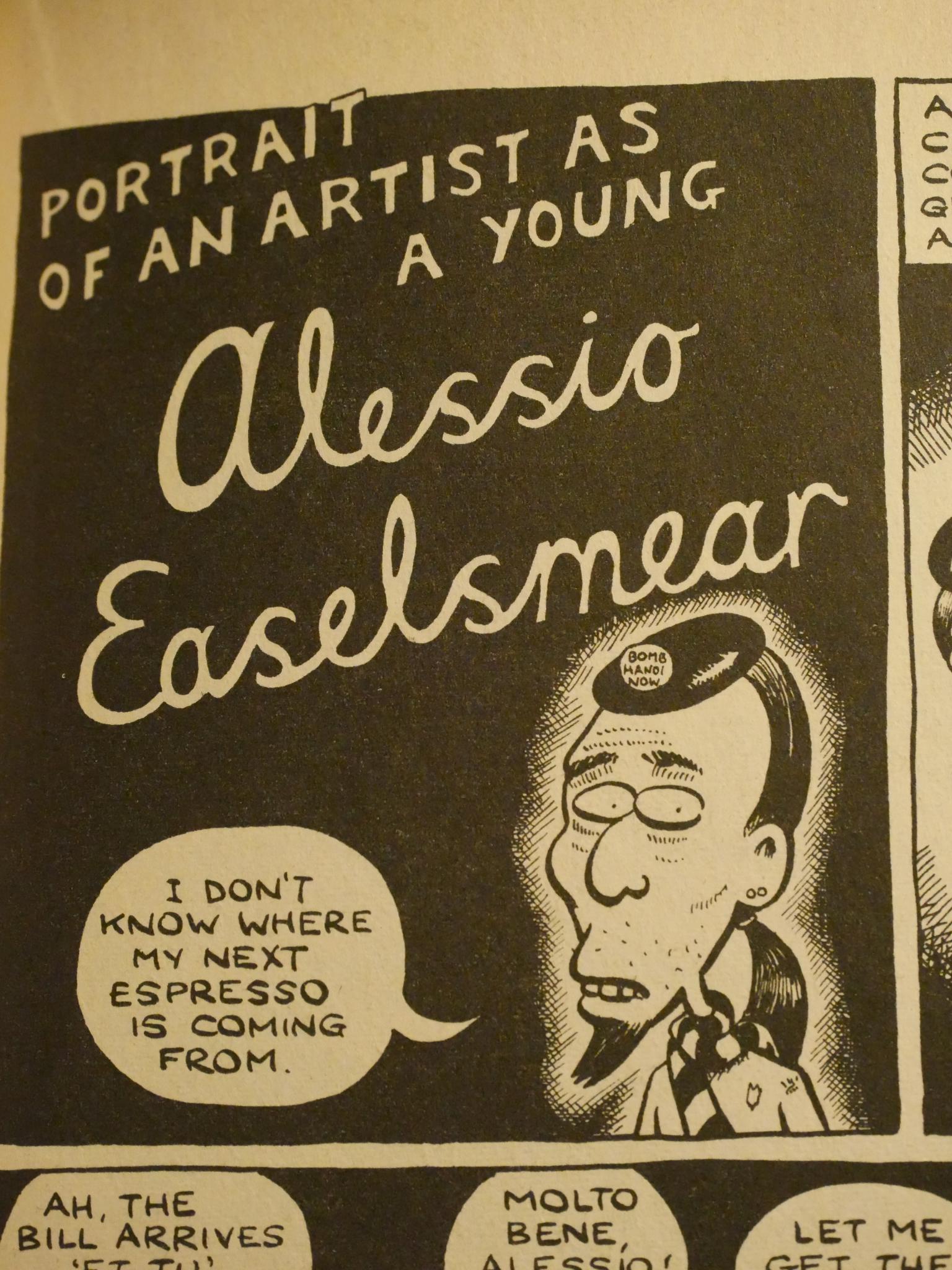 And, of course, everybody likes making fun of artists.

During the first four issues, I think, there are no two stories that take the same storytelling approach, and the art styles shift wildly, too. This period (1987-91) was apparently a time of constant experimentation for Sacco. There’s one honest-to-goodness autobio story in the first issue, too, but it is (as Sacco (full-and-rounder-lipped than usual) explains here) more of a way to complain about how one of his friends from college was a bit of a dick. 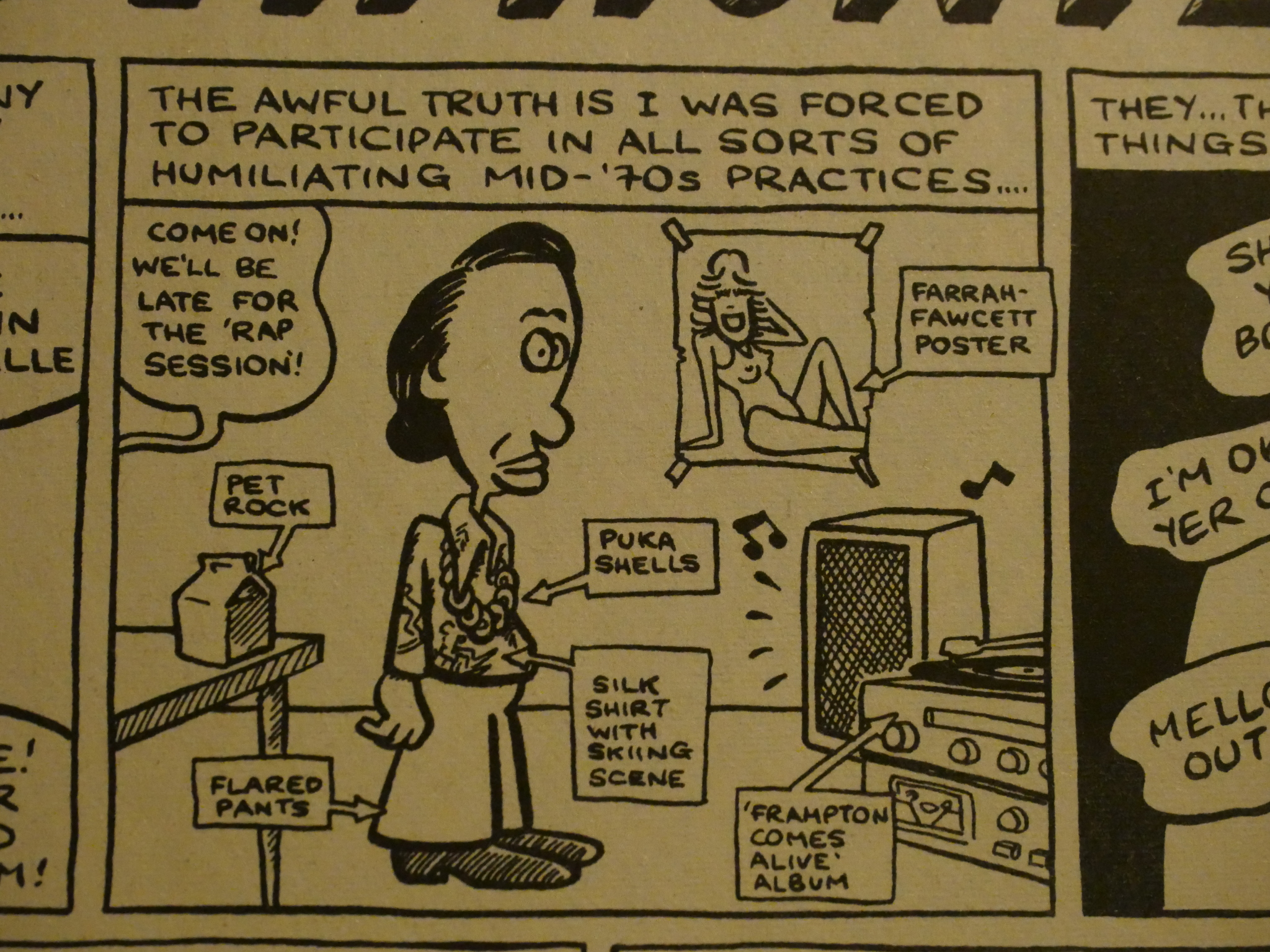 And then one funny childhood reminisce. Man, these issues are just packed. I took me all evening to re-read these comics… 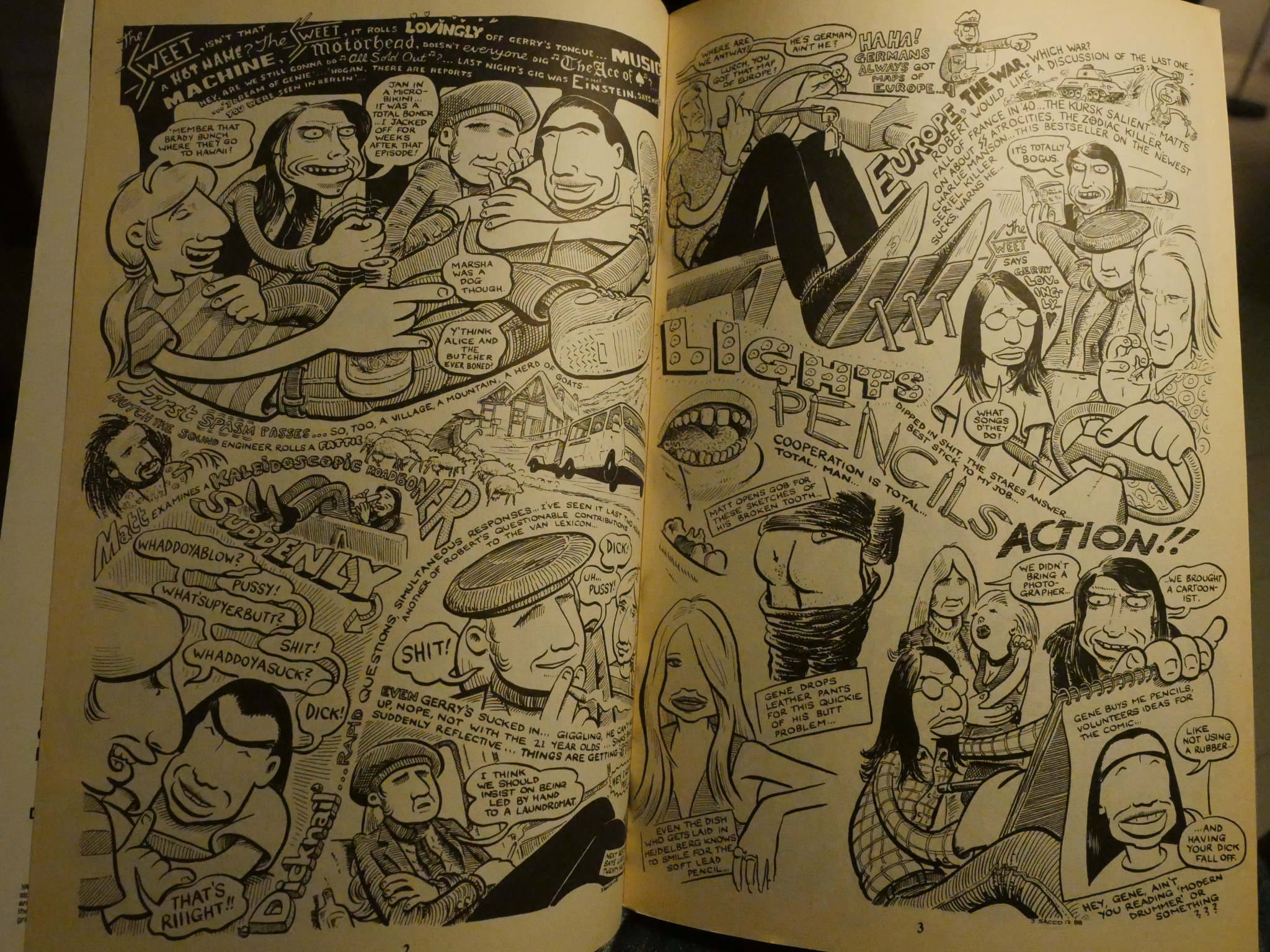 The second issue is all one long story, and it’s about the time when Sacco accompanied a rock band on a European tour as their resident cartoonist biographer. Or something. And, yes, all the rock band tour clichés make their appearances (groupies, border guards, cramped vans), but the story, such as it is, is told in a quite oblique manner. Very little is explained and things sort of just… happen… as if in a daze. I’m not quite sure whether it’s completely successful, but it’s interesting, at least. 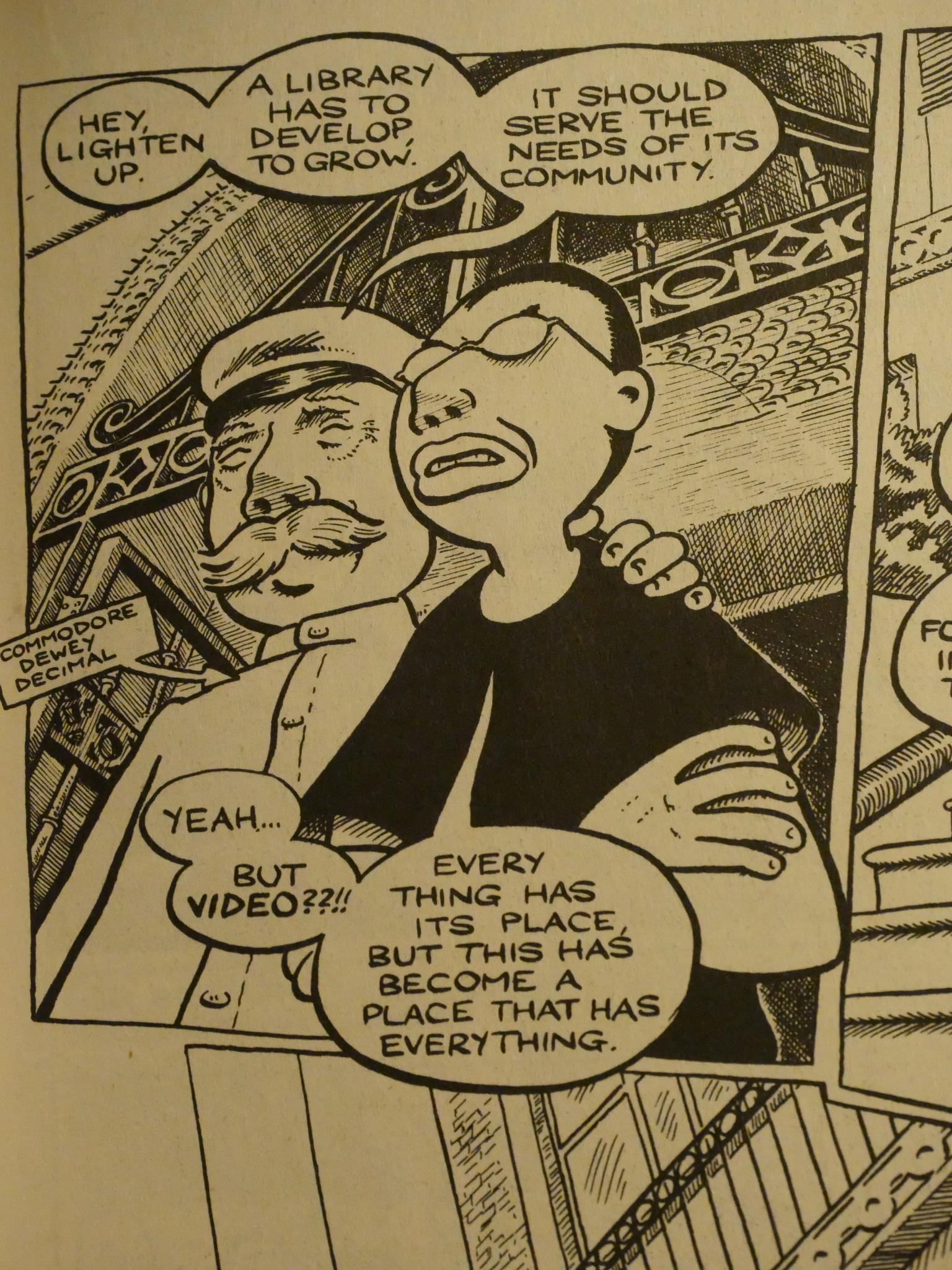 In issue three we’re back to slightly shorter stories again, and the first one is a somewhat allegorical piece about working in a library. I mean, he probably did, and all his worries about the library system are probably true, but I’m assuming that there aren’t literally slobbering hordes grasping for the latest “high demand” book. 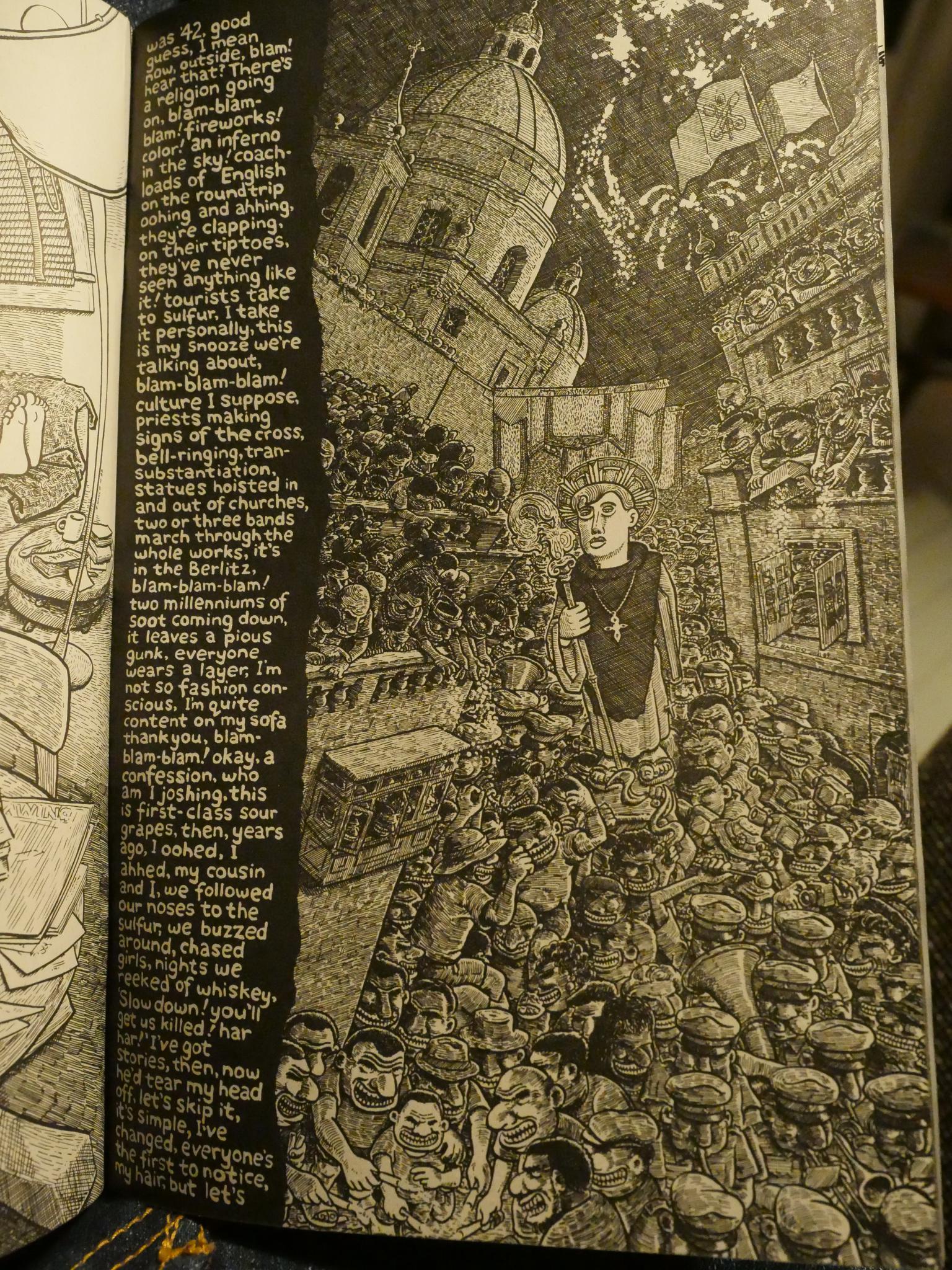 The longest piece in the book consists of pages that look like this. You have this long running text on the left that seems to hint at perhaps being automatic writing, or perhaps Sacco’s inner monologue while snoozing on the couch. Anyway, I’m not quite sure what it’s about at all, really, but look at that art! Man! Now that’s obsessive rendering. All those tiny itsy bitsy lines on all those people and buildings. 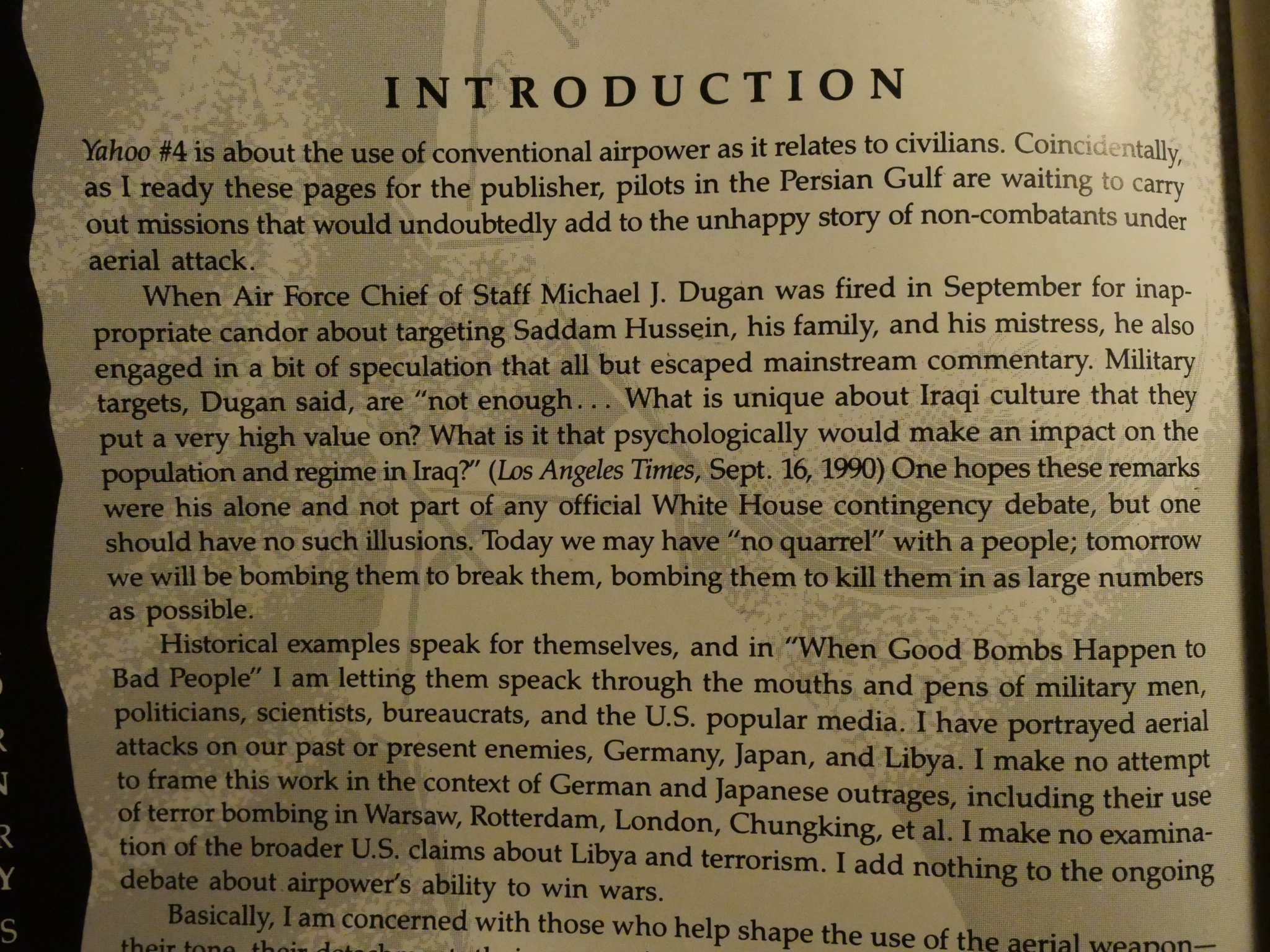 The fourth issue (and we’re now up to 1991; Yahoo was published on an approximate yearly, er, schedule) is the first one that has Sacco talking to us in an editorial voice, and it’s also the first one that’s about what has been his subject for the rest of his career to date: War. 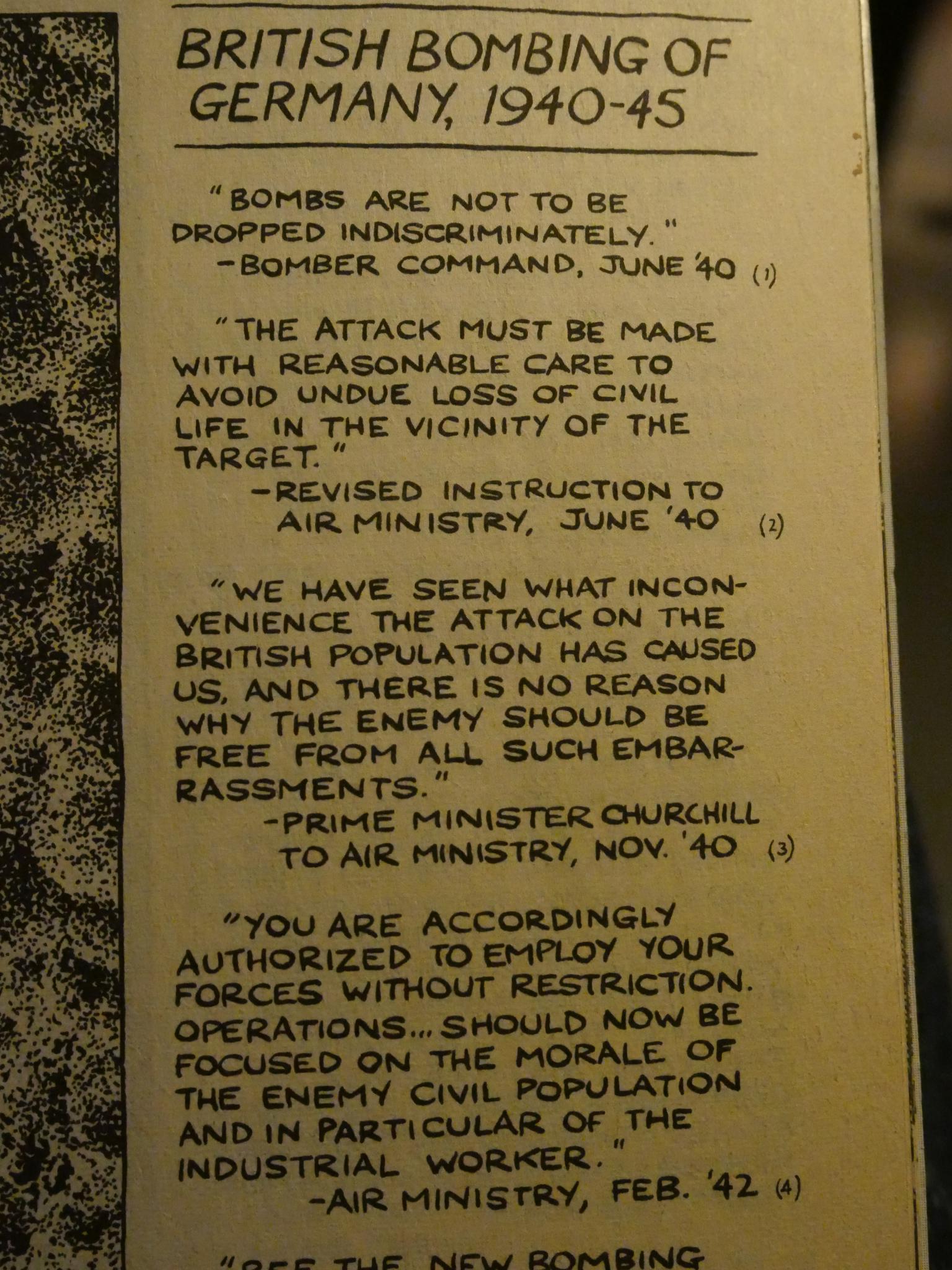 The first piece consists of quotations from officials in various wars about aerial warfare. It’s edjumacational, too: I didn’t know about the incendiary bombs the Americans used on Japanese cities in World War II. (That’s “fire bombs” for those that don’t speak militarese.) 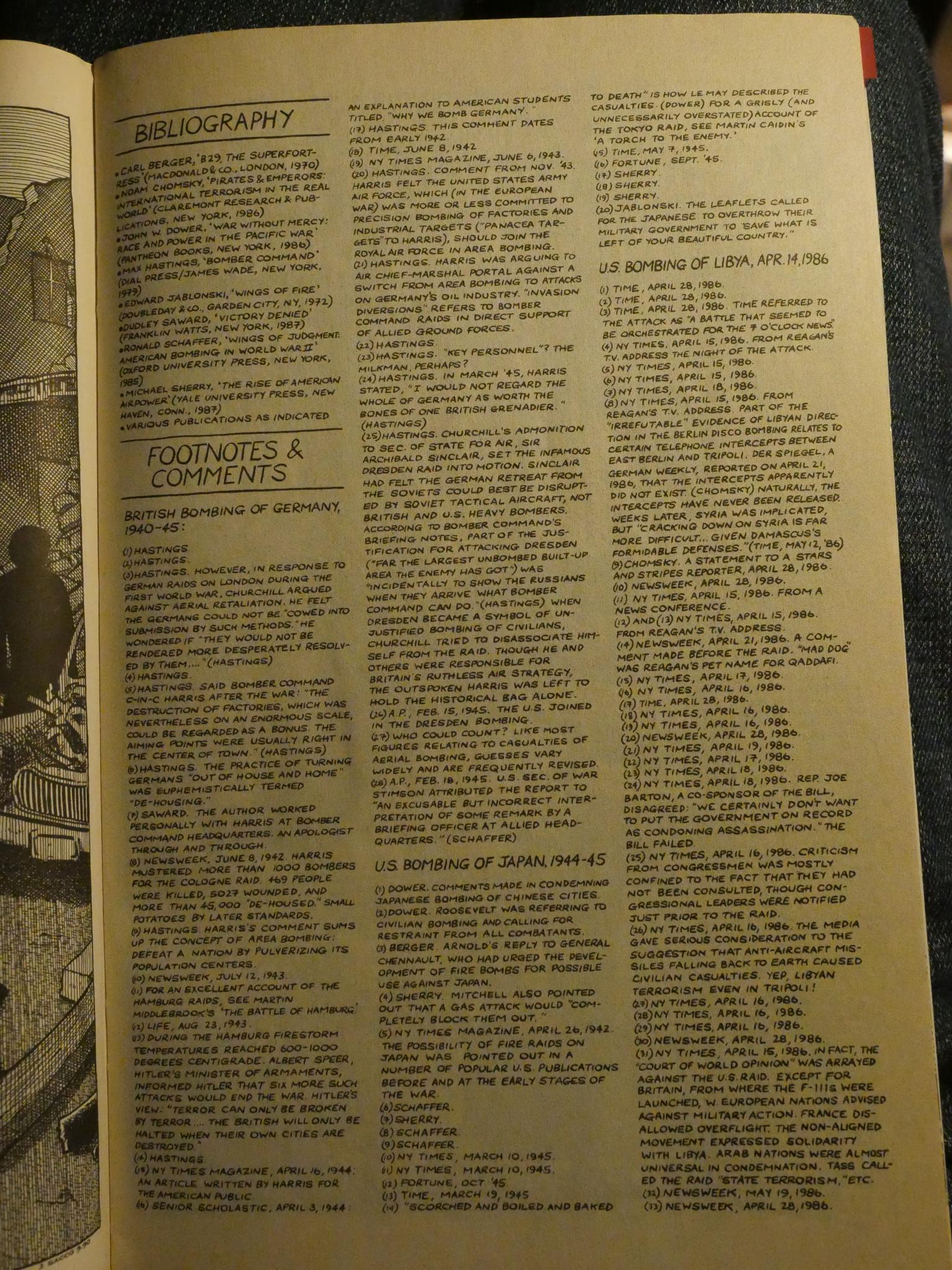 And it’s obvious that Sacco has found something to write about that he’s passionate about. That’s the footnote page from the eight page piece on airpower. The second, and longer piece, isn’t autobiography, but biography. Sacco tells the story about his mother who was a child in Malta during World War II, and what she experienced. You can see where his cartoon character got his lips from, but it’s also a quite affecting story. Now, the first four issues were fine. But something definitely happened before issue five. You can see Sacco taking all his drawing and writing chops (both for humour and serious stuff) and finally getting everything to mesh perfectly. It’s such a dramatic step forwards: It reminds me of the difference in Daniel Clowes between the last issue of Lloyd Llewellyn and the first issue of Eightball. 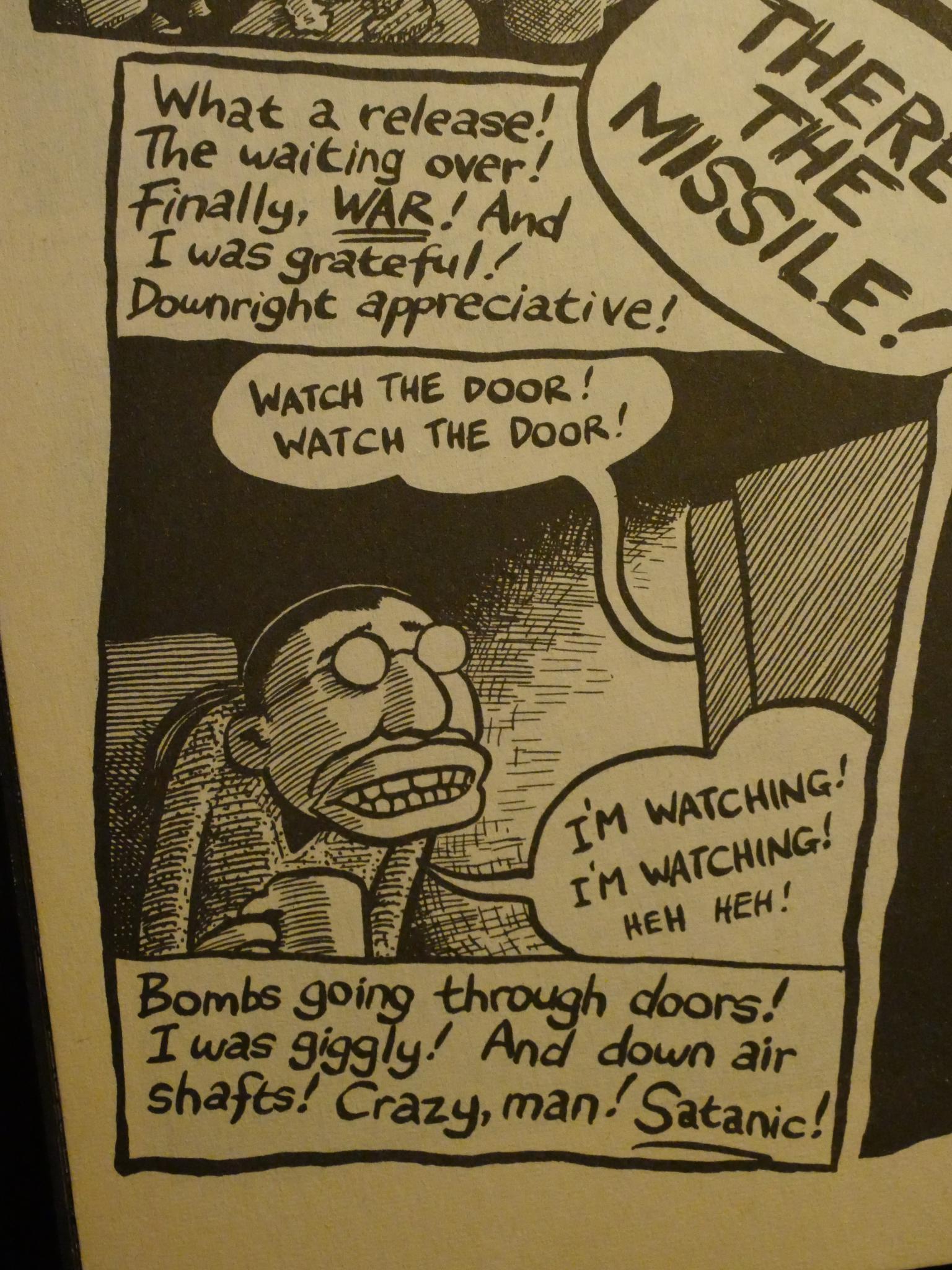 The story (which fills the issue completely) is about the run-up to the first Gulf War, and it’s about Sacco’s break-up with his girlfriend at the same time. I know, that sounds like a writing workshop idea, but reading it, it’s completely engrossing. It’s infuriating (the war inevitably coming) and it’s heart-breaking (both Sacco’s personal depression and the Palestinians Sacco met while taking German classes (he’s living in Berlin at this point)).

This is Sacco’s first fully realised work, and points out the way for his super-stardom now. 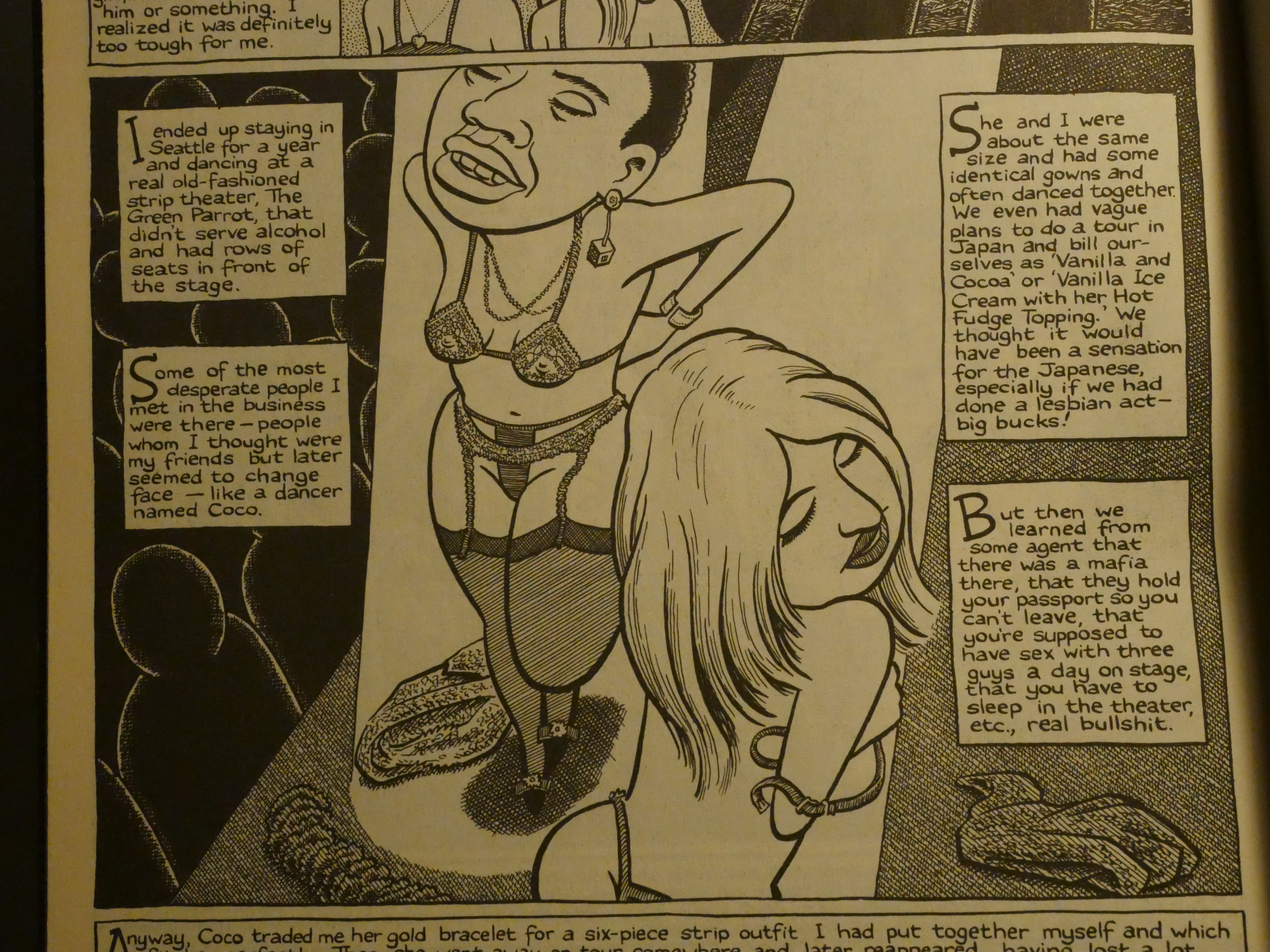 You illustrate a comic book written by a stripper.

The sixth issue of Yahoo was written by Susan Catherine, and it’s fine. A bit on the wordy side, but Catherine’s stories about dancing naked on stage throughout most of North America are interesting. But stripping seems to be such a go-to subject for alternative comics artists that it’s a bit “eh?”-ey. I think this is at least the fifth comic book in this blog series that features strippers prominently. 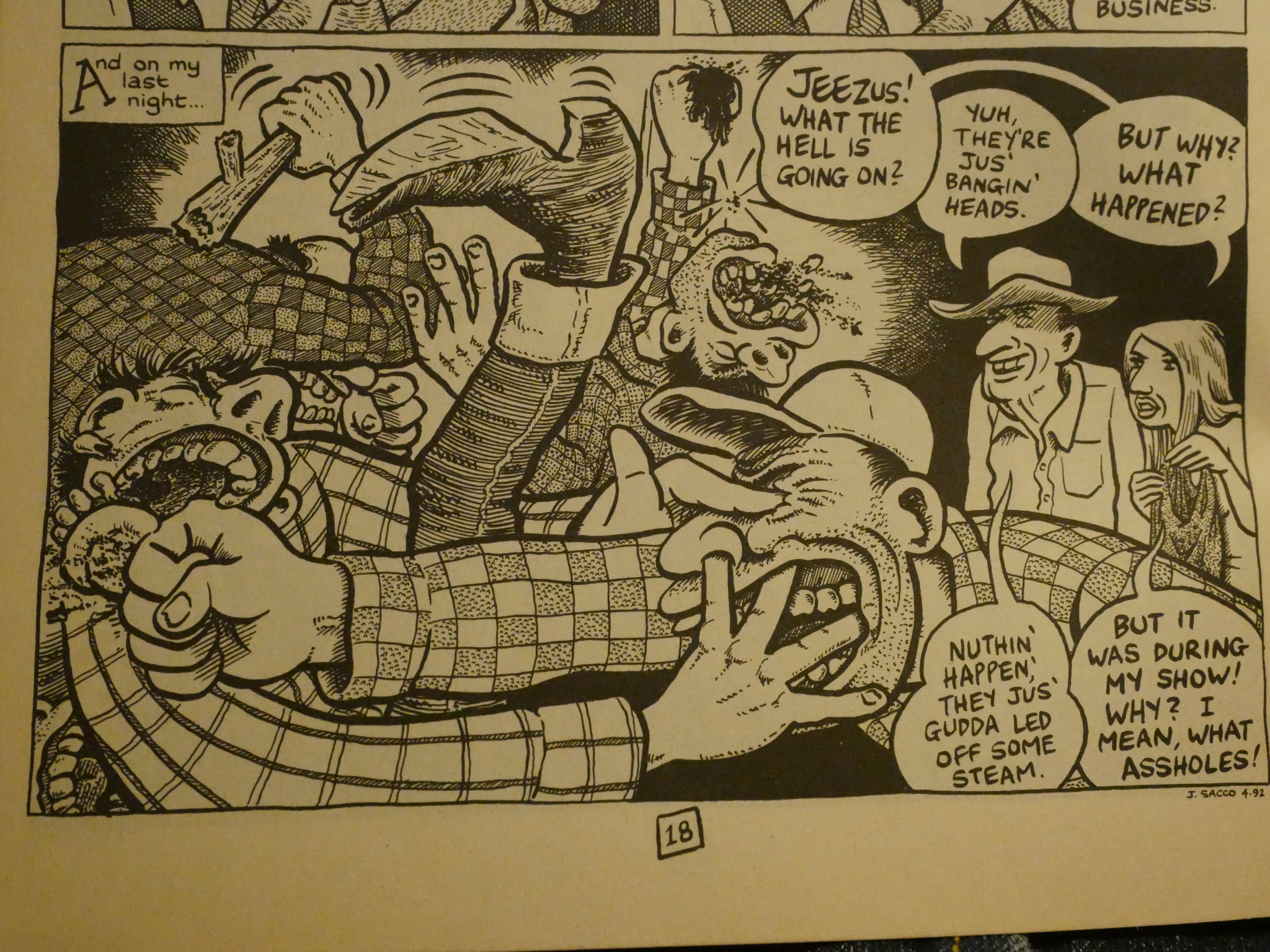 If only there had been more scenes like this.

So that’s the end of Yahoo, and Sacco went on to find his destiny (documentary comics about war zones) and fame and hopefully fortune. We’ll cover his next series, Palestine, when I finally get hold of a copy of issue 2 of that series, which should be (according to FedEx) this weekend.

Instead, we end this article with a look at Spotlight on the Genius That Is Joe Sacco, which is a compilation of early and mostly unpublished comics Sacco had done in the mid-80s. 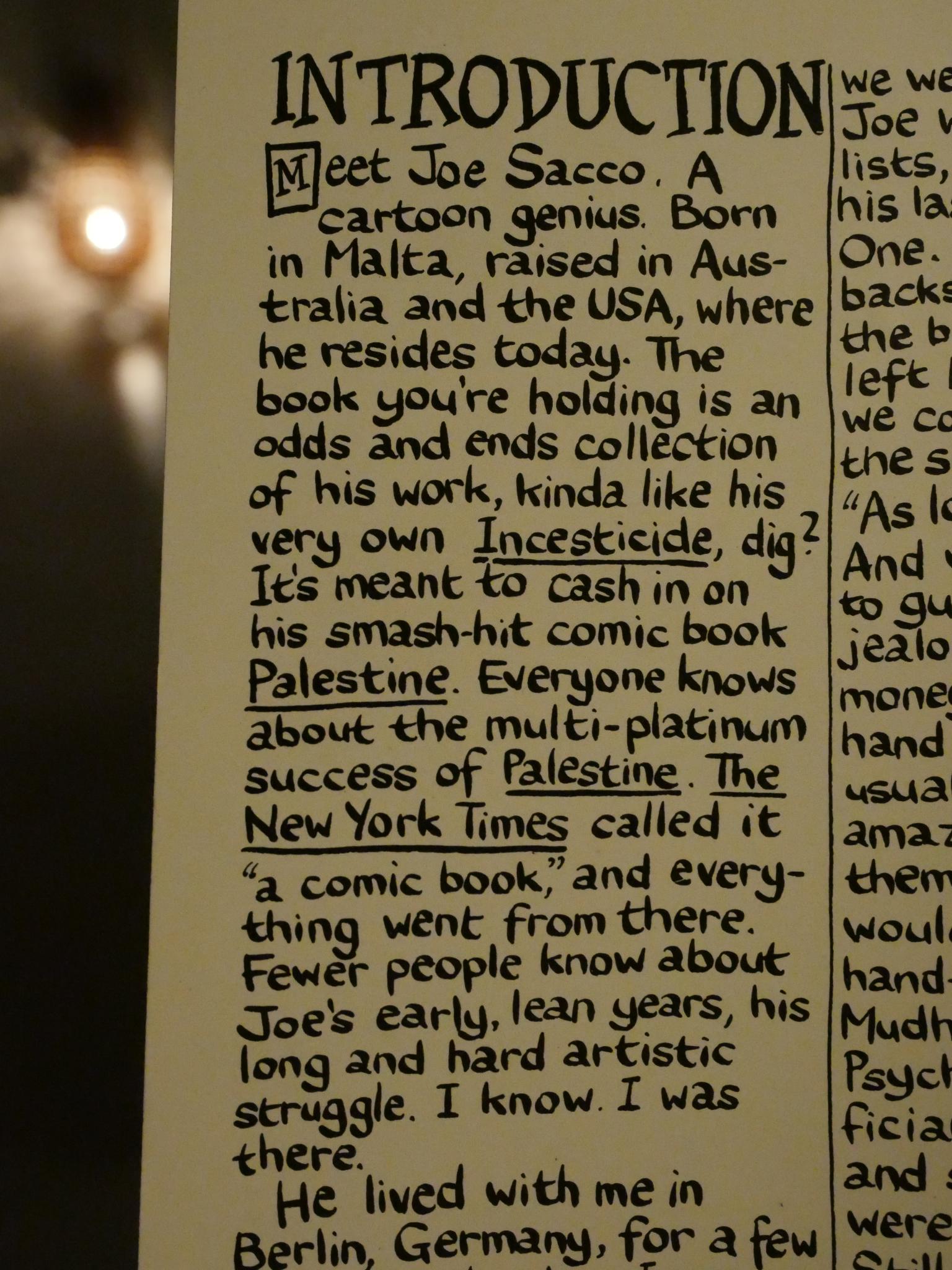 Christof Ellinghaus writes an introduction that provides the rationale for this compilation, so there was apparently a buzz about Palestine this early (which is 1993). 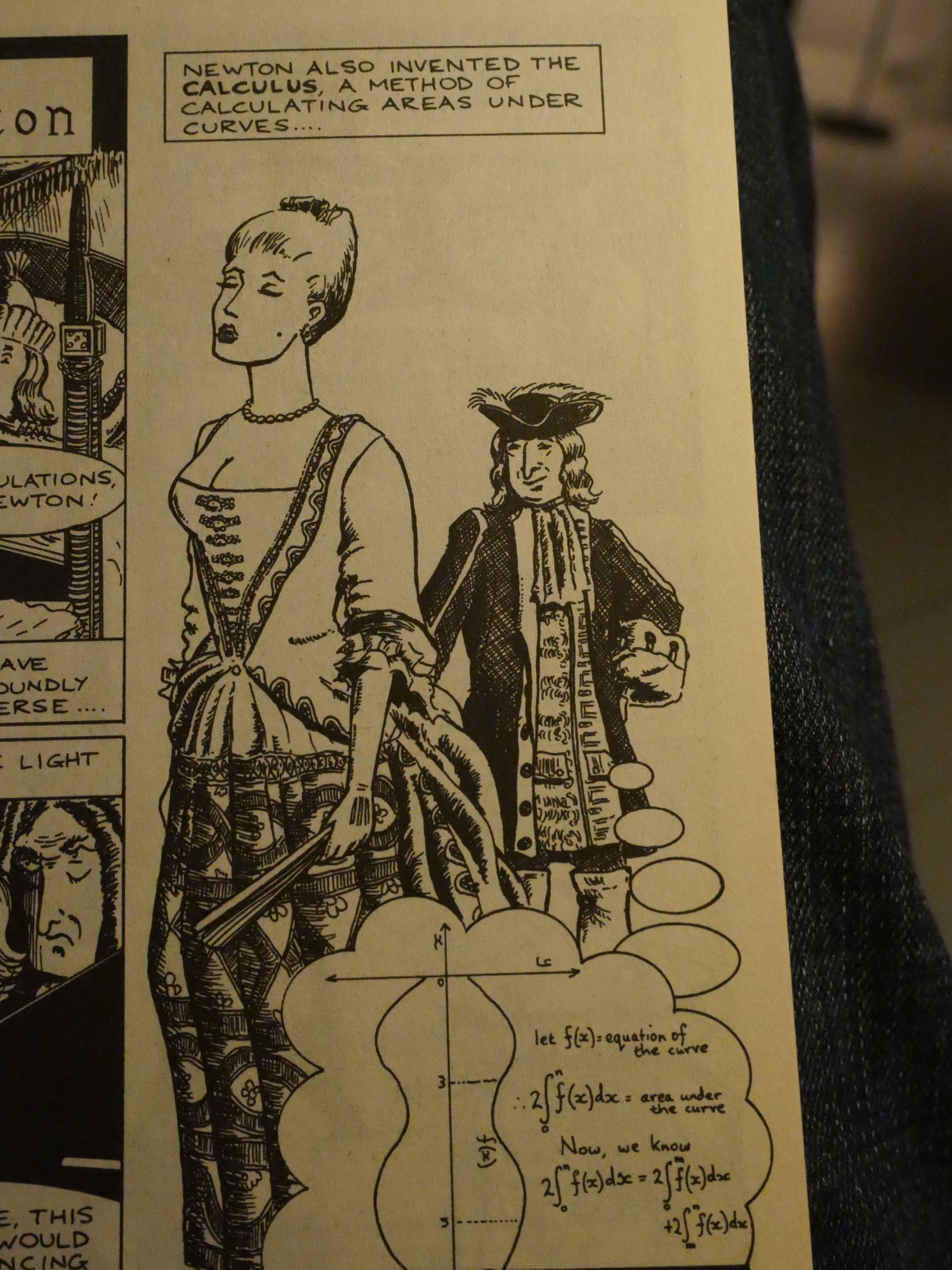 All the comics in this volume are of the non-serious kind, and some of them are quite funny. Here’s how Isaac Newton invented calculus. 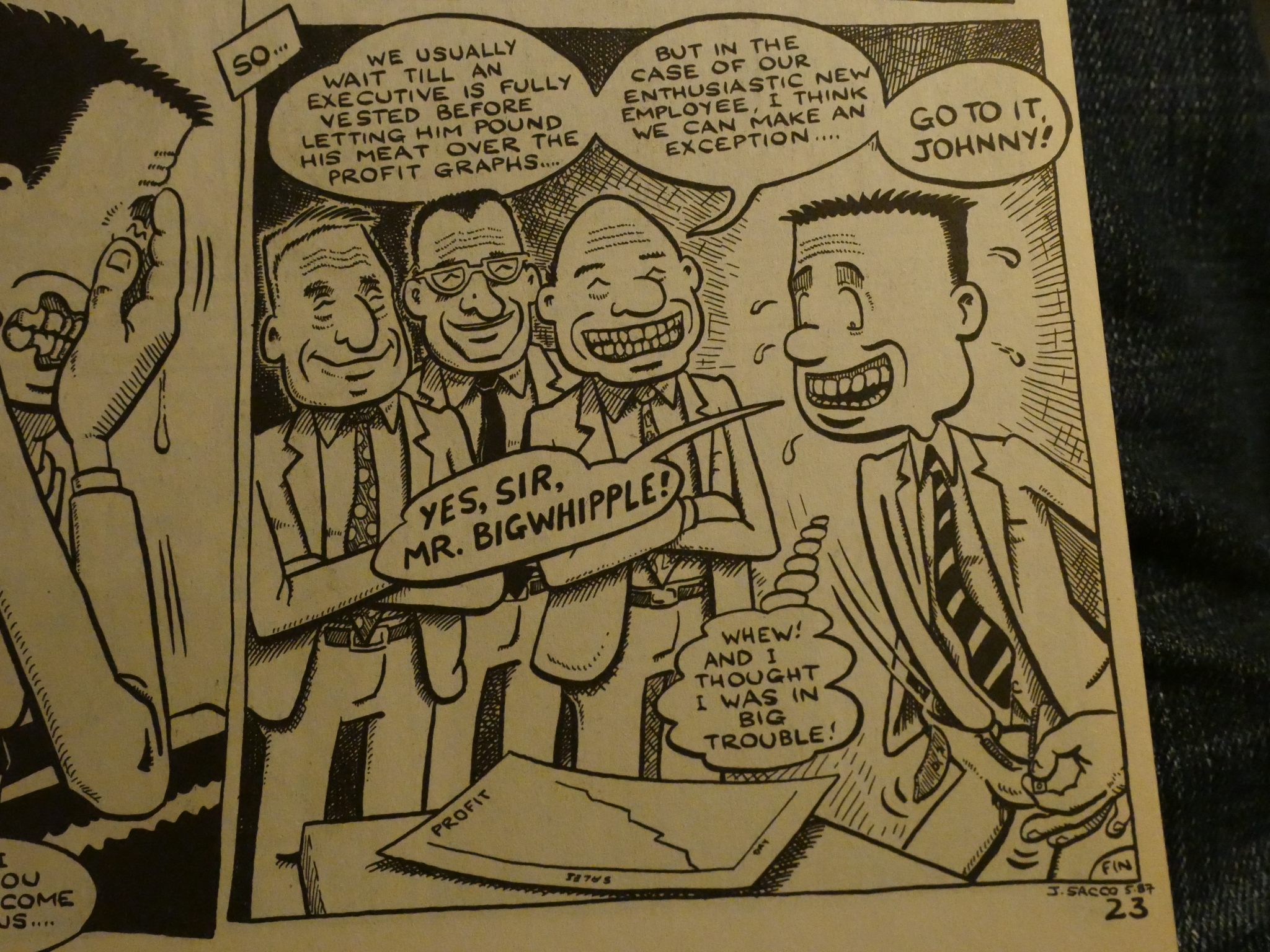 And a longer, quite Monty Pythonesque look at life in a medieval hamlet.

It’s all amusing, and I’m not sure whether this material has been reprinted since. Most (or all?) of Yahoo has, in the Notes From a Defeatist book from 2003. Since Yahoo, Sacco has done mostly journalism/war stuff, but he returned to teh fun last year with Bumf Vol. 1: I Buggered The Kaiser.

One thought on “FF1988: Yahoo/Spotlight”