Perramus: Escape from the Past by Alberto Breccia and Juan Sasturain. 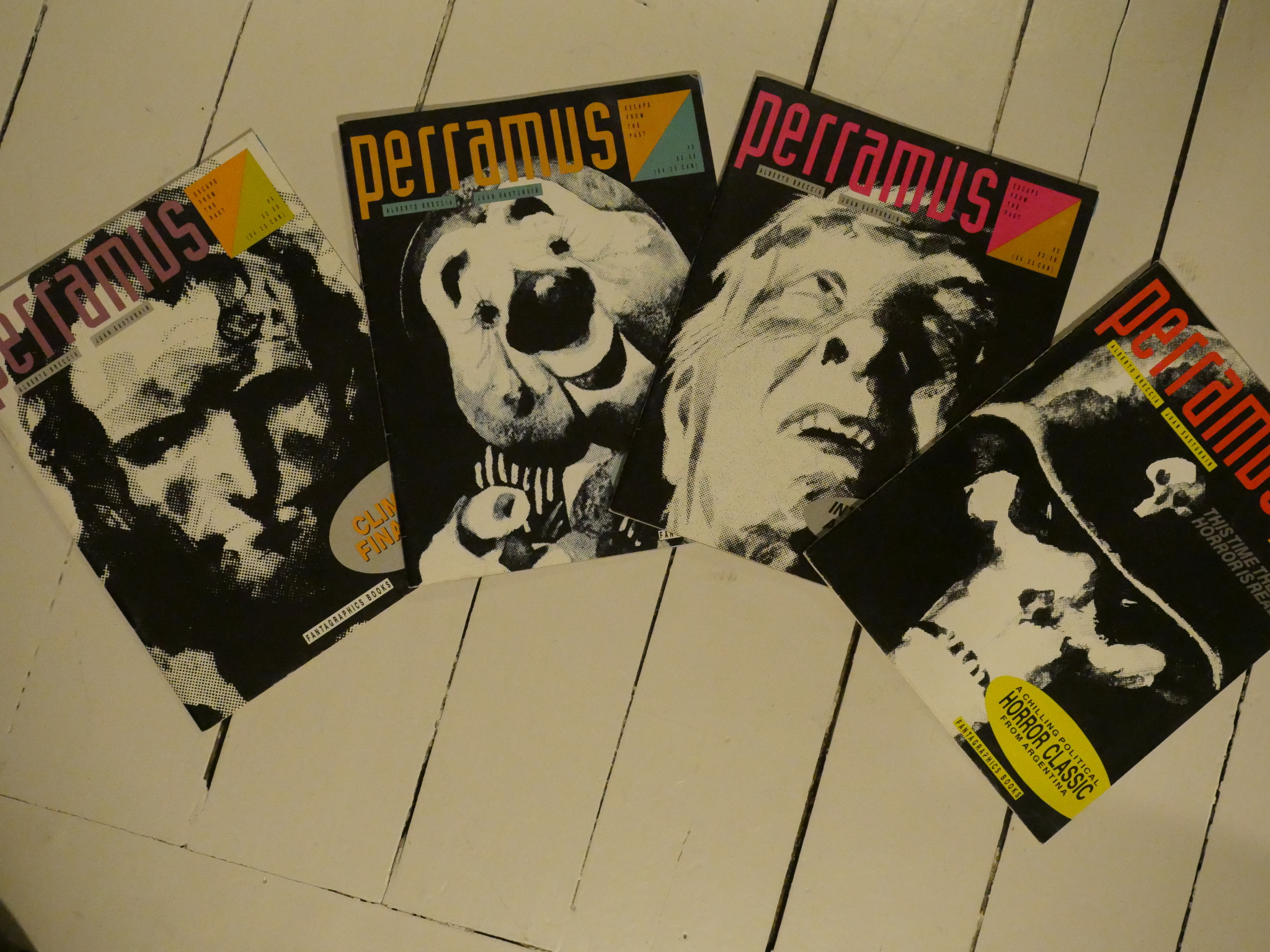 Hi! I had hoped to end this blog series about Fantagraphics last year, but having the scheduling slide is so very Fantagraphics, isn’t it?

Only three more posts to go, though. 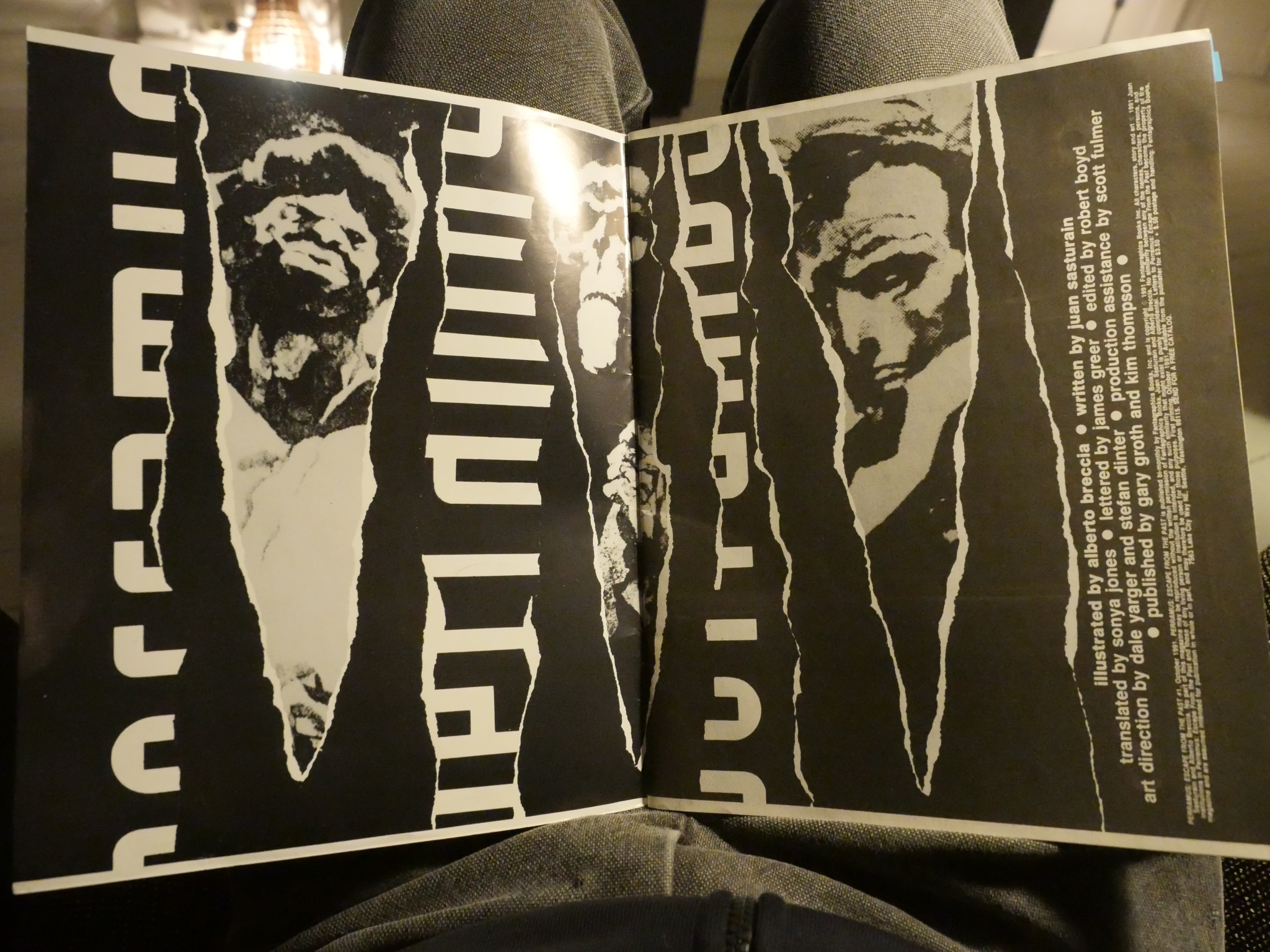 Anyway, strangely enough, I did not buy this series at the time, so I had to buy them now. These comics were definitely the most expensive items I had to procure for this blog series. Which is both odd and perhaps not so odd: These probably had a minuscule print run, so they’re rare, but on the other hand, they’re translated reprints that are widely available in other languages… 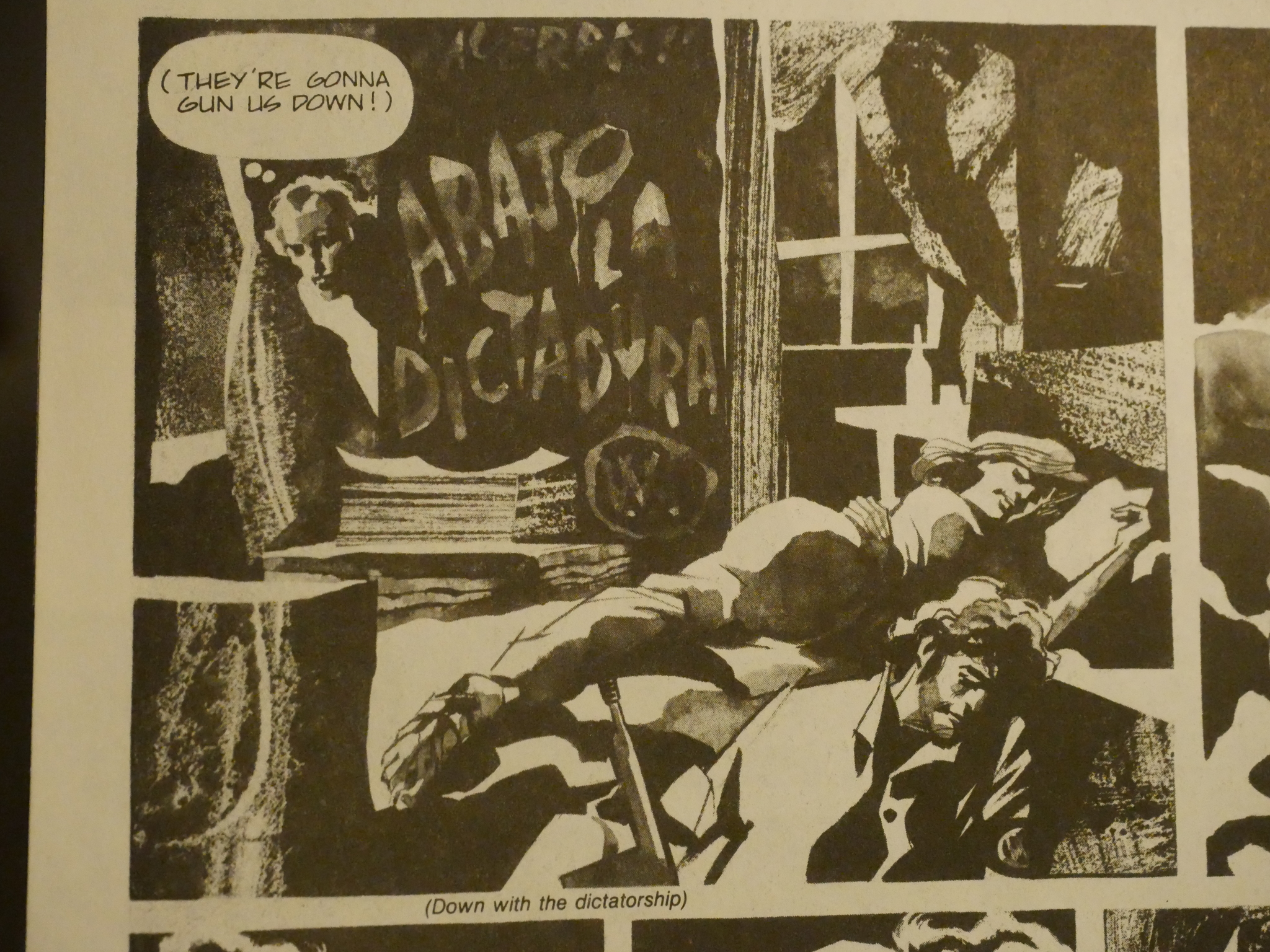 They were originally serialised in Italy in 1983, but Breccia is Argentinian and the plot lines clearly reflect that and the post-Junta time they were produced in.

Fantagraphics helpfully provides these footnotes (seen above) that carry both translations of Spanish text on walls and in sound effects, and also explain who some people are. 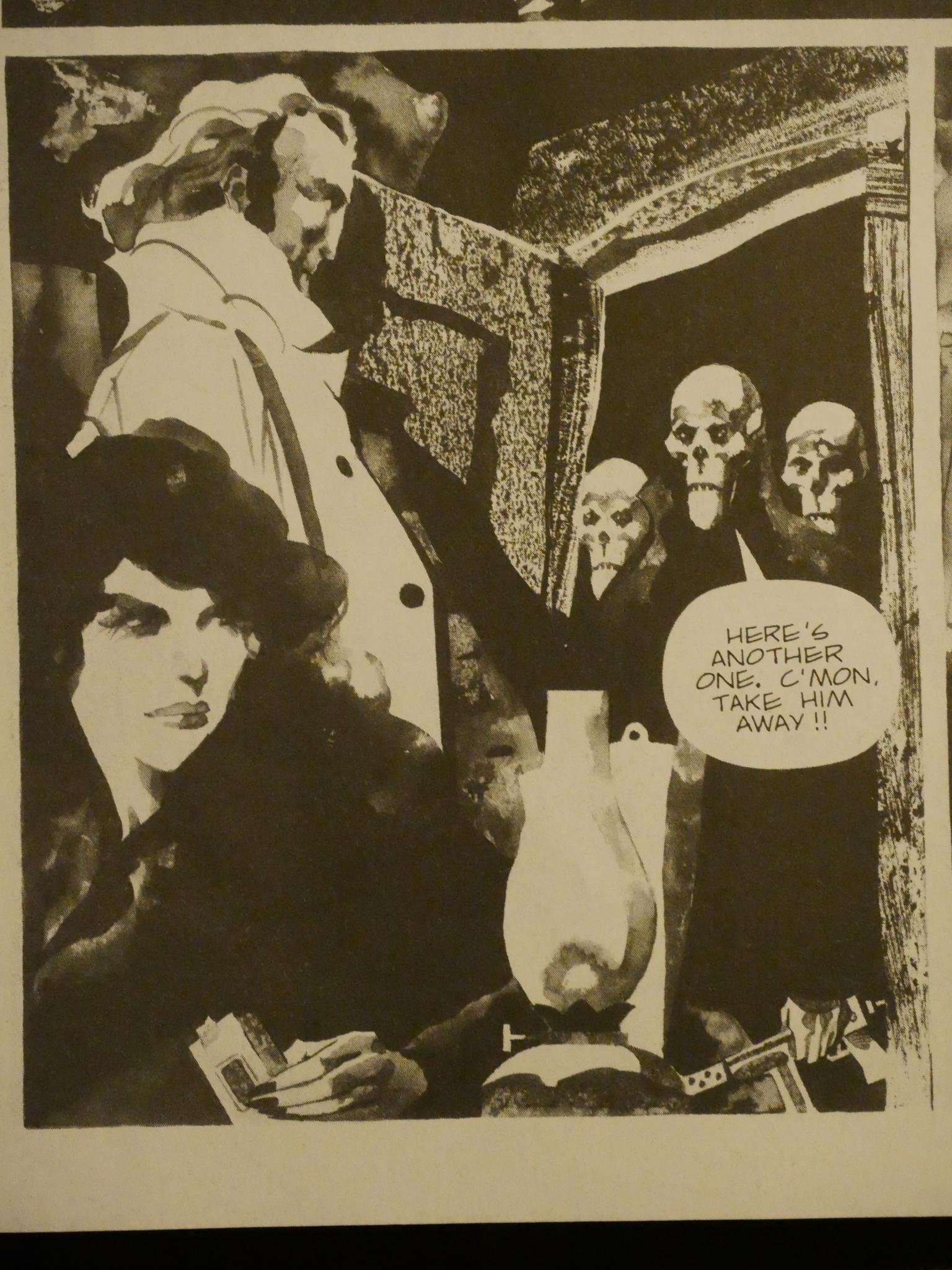 Fantagraphics published Perramus in four forty page magazine sized issues, and there are two clear stories being told. The first half is about Perramus, an amnesiac escaping a dictatorship. Hi-jinx ensue. Sorry. It’s all very symbolic and strange, and occasionally gripping. 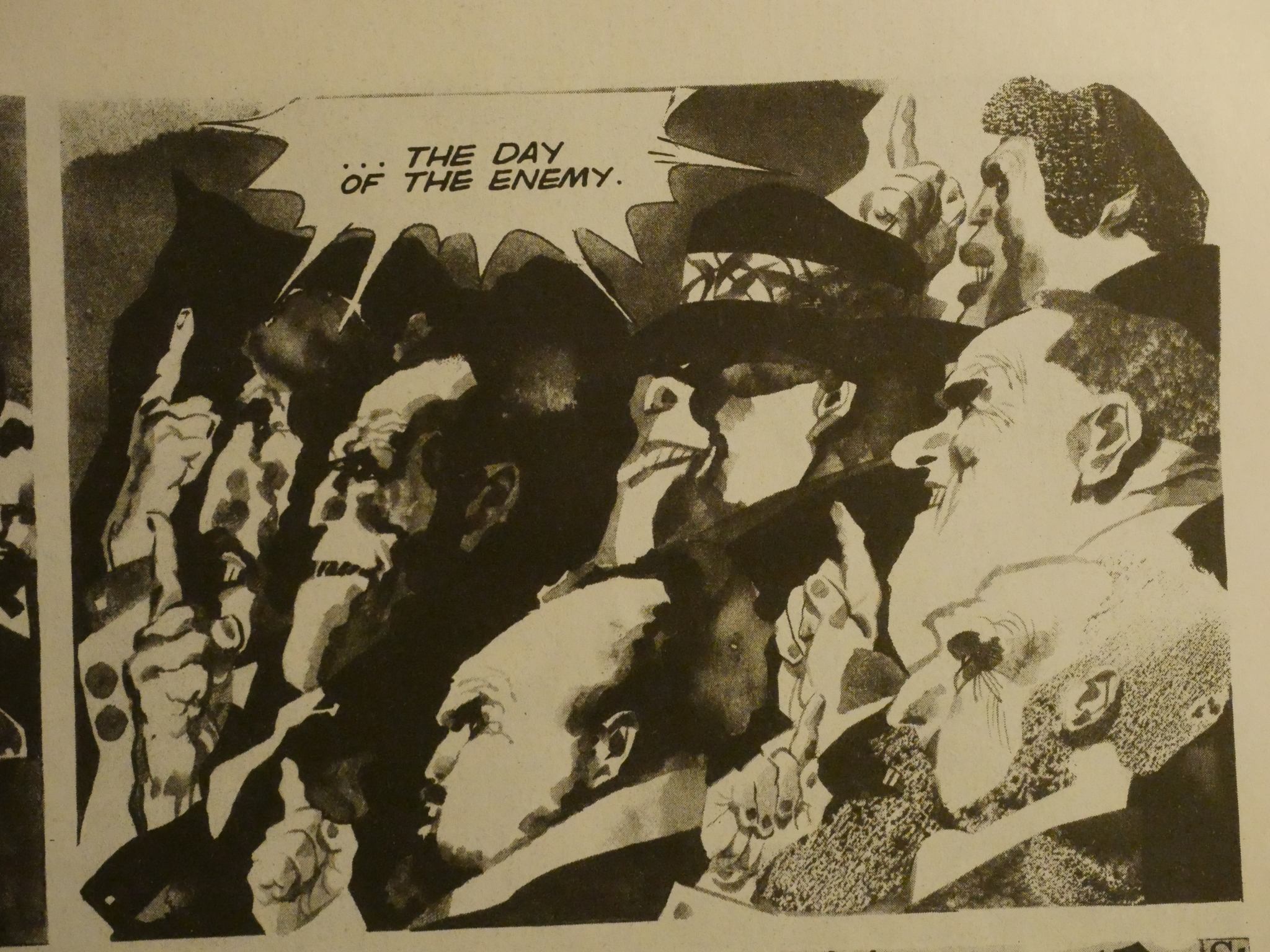 The artwork is rather lovely, isn’t it? Done with ink washes, perhaps? I’ve seen European editions of Breccia where they’ve printed the artwork with several different grey inks, which looks really good. Fantagraphics have opted for the cheaper rastering method, but it looks fine, too. It’s sometimes a bit more washed out than it should be, I think. 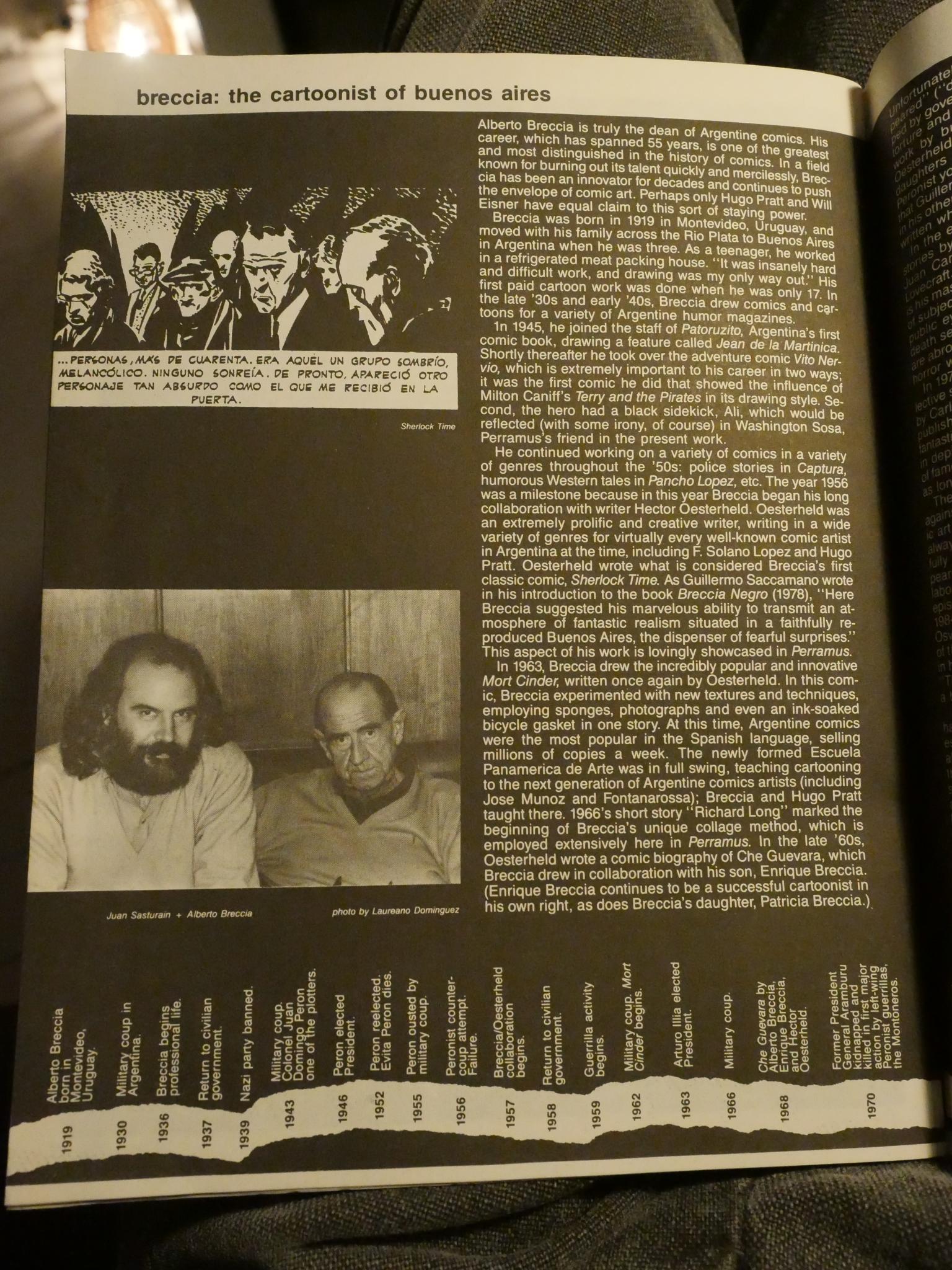 The first issue has a brief Breccia autobiography and timeline. 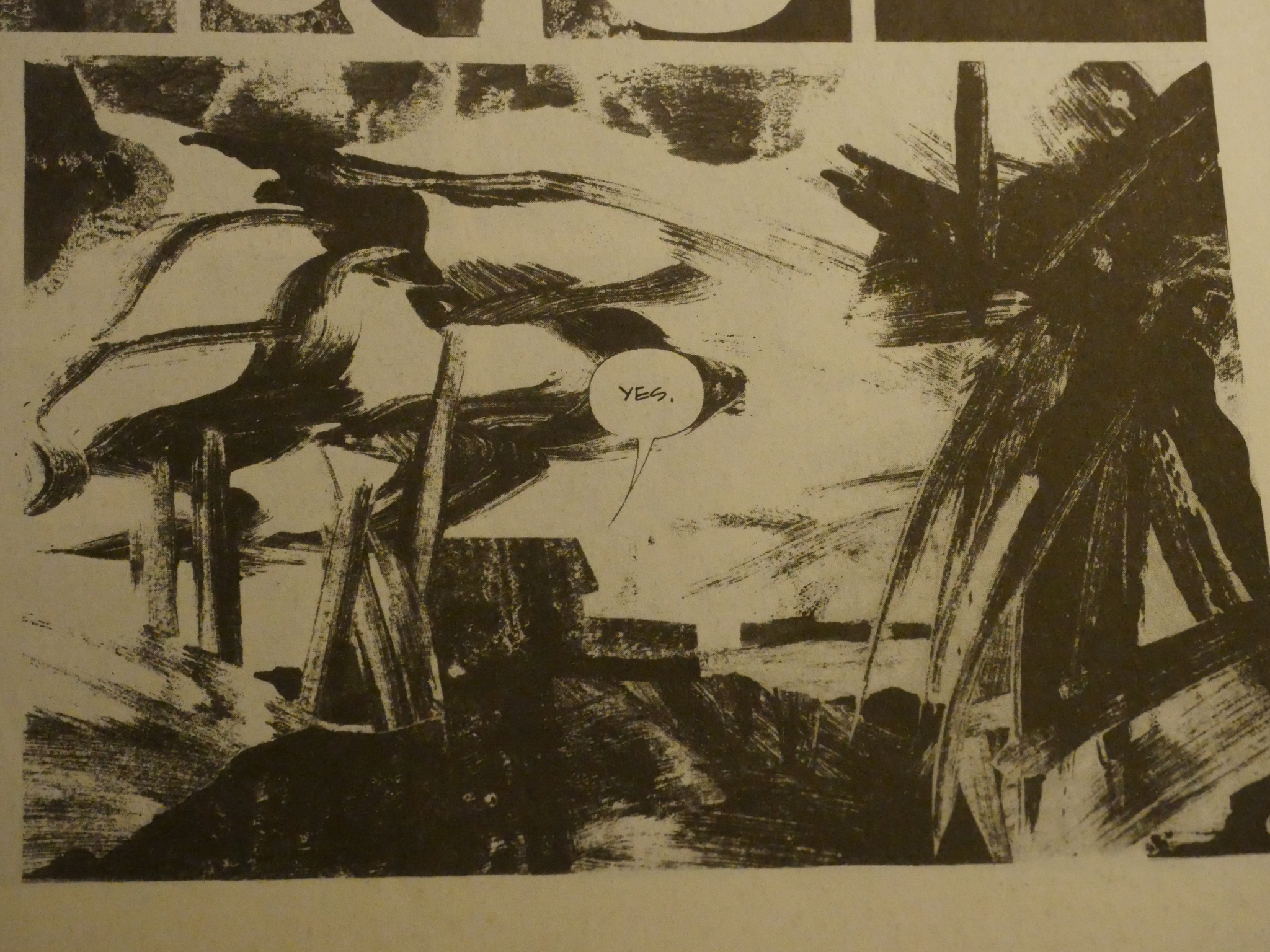 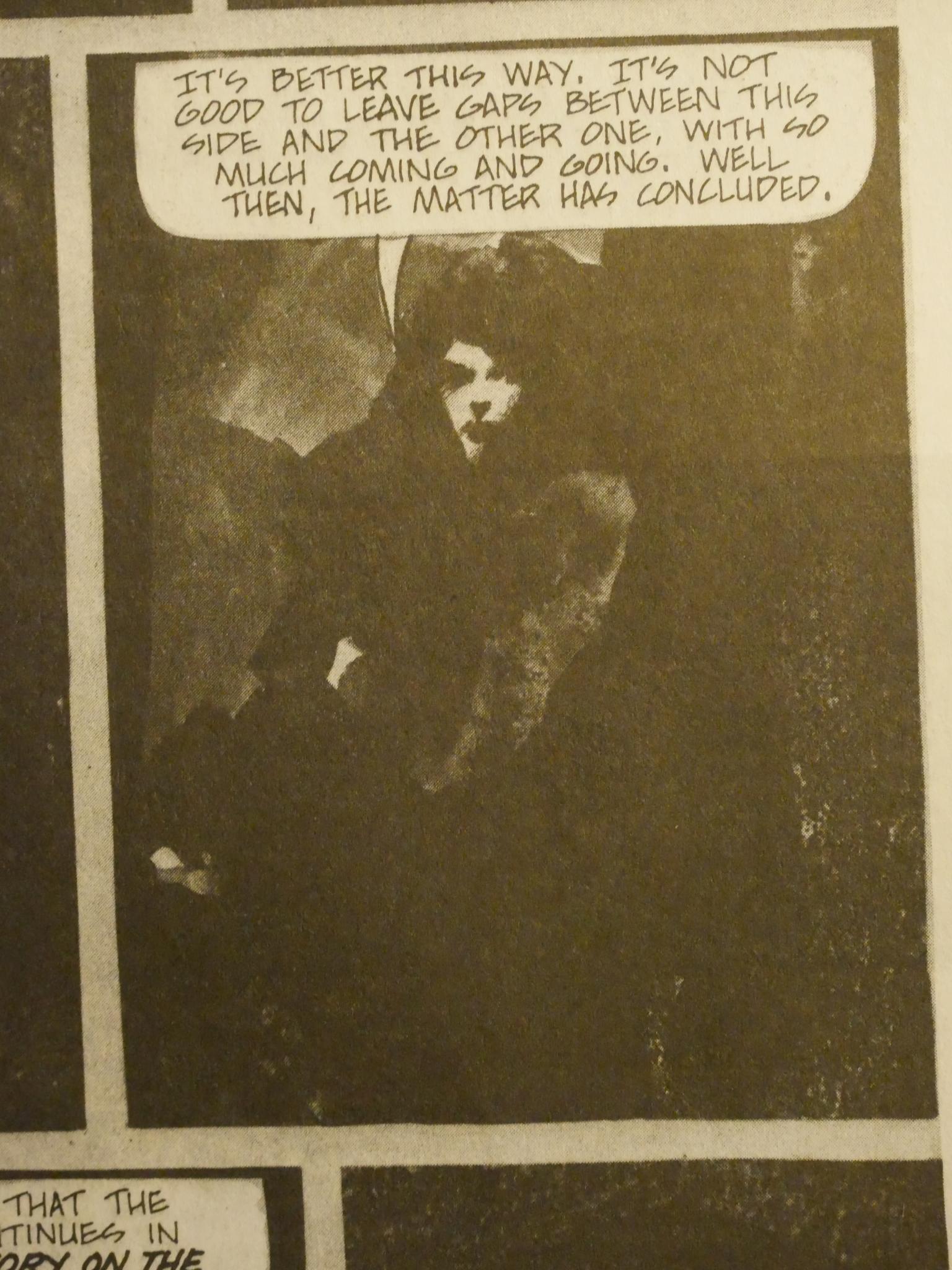 And sometimes it teeters on the brink of incomprehensibility, but it doesn’t really ever tip over. 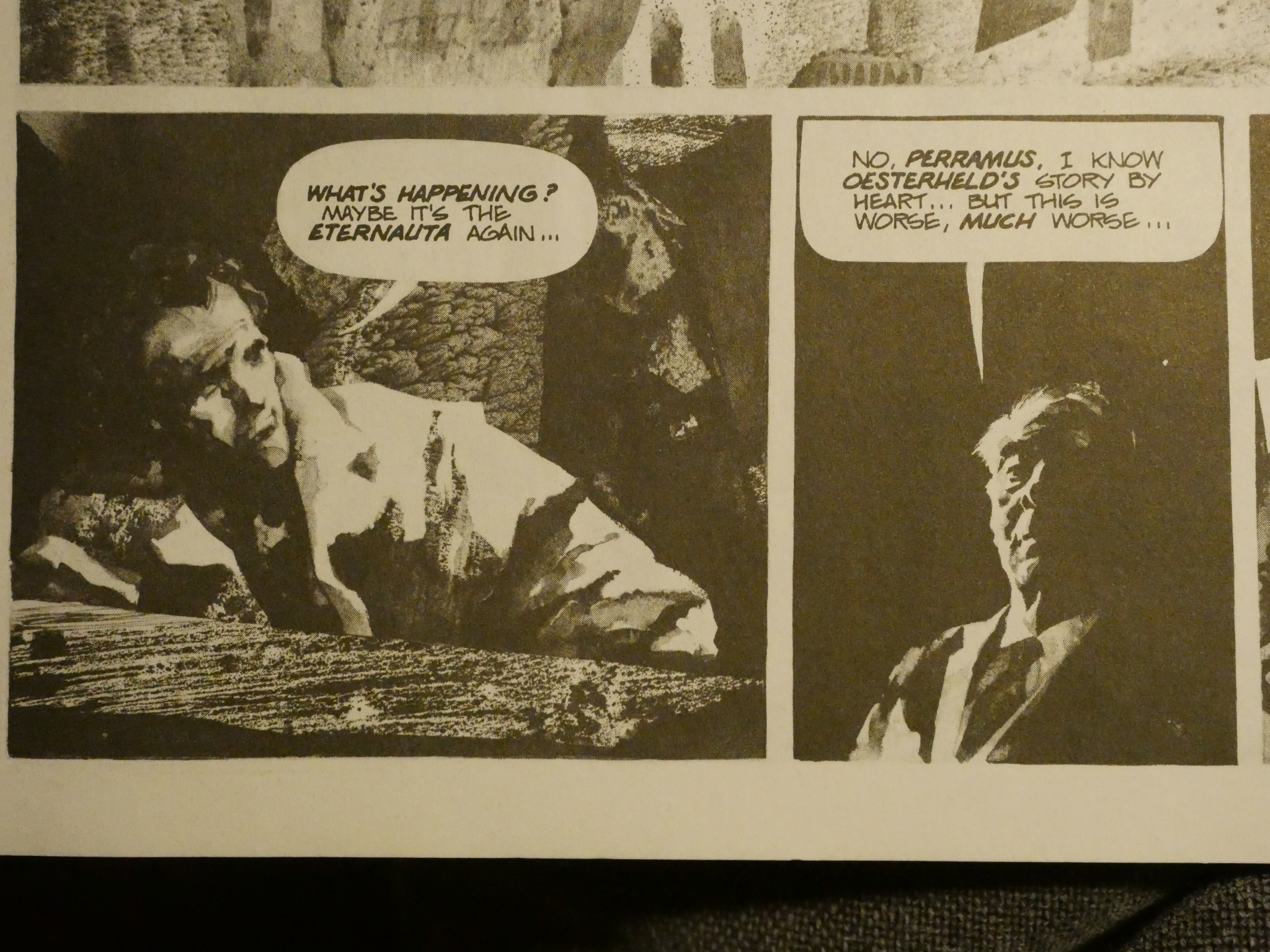 Hey! That’s a reference to The Eternaut, a 60s (I think) Argentinian serial that was reprinted by Fantagraphics in 2015 to great acclaim and attention. Breccia drew a reworked version of that work in the early 70s, which I haven’t seen. 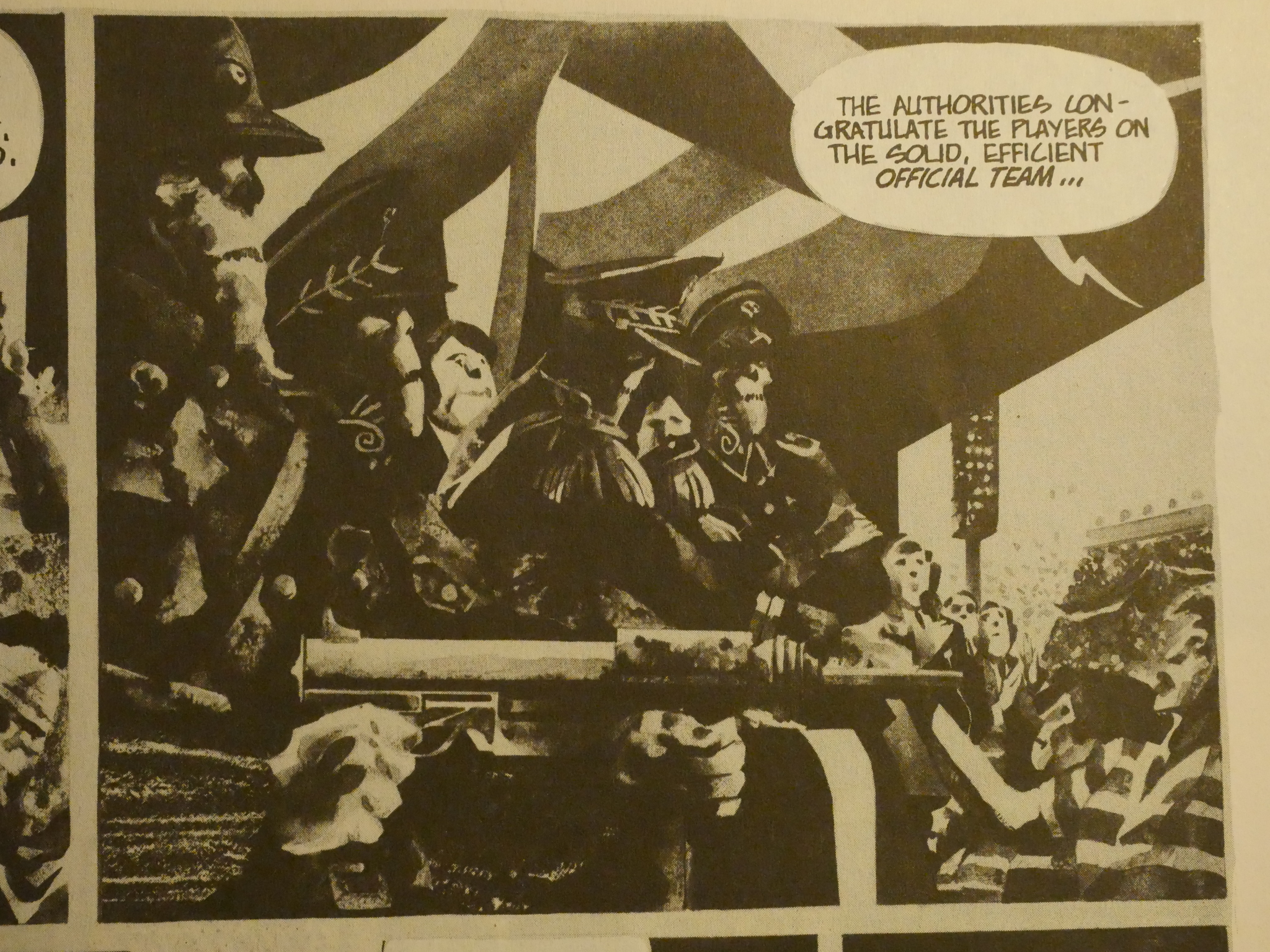 The final issue is printed on newsprint, which I take to mean that Perramus sold even worse than projected. This reduces legibility even further, and also gives the story a kinda Warren 70s feel.

The cover promises “CLIMACTIC FINAL ISSUE”, and the latter part is true, but climactic? It’s very metaphorical, though.

Breccia died in 1993. He hasn’t been widely translated into English.