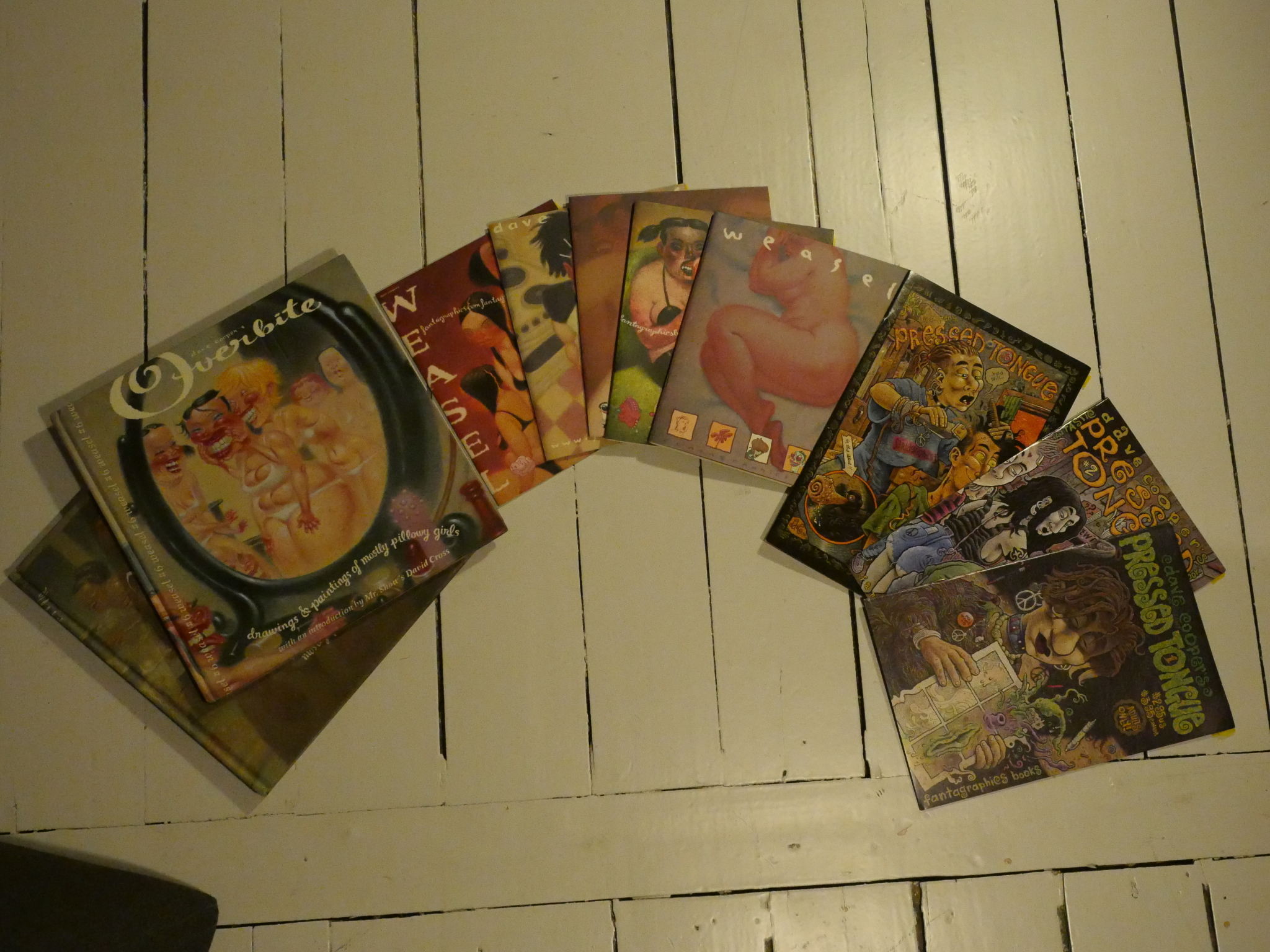 In my mind, Dave Cooper was part of a movement towards “body horror” in 90s comics, as exemplified by Renée French, Al Columbia and (somewhat earlier) Jim Woodring. All these artists are technically proficient and create dark, “squishy” pages that straddle the line, uneasily, between horror and humour. 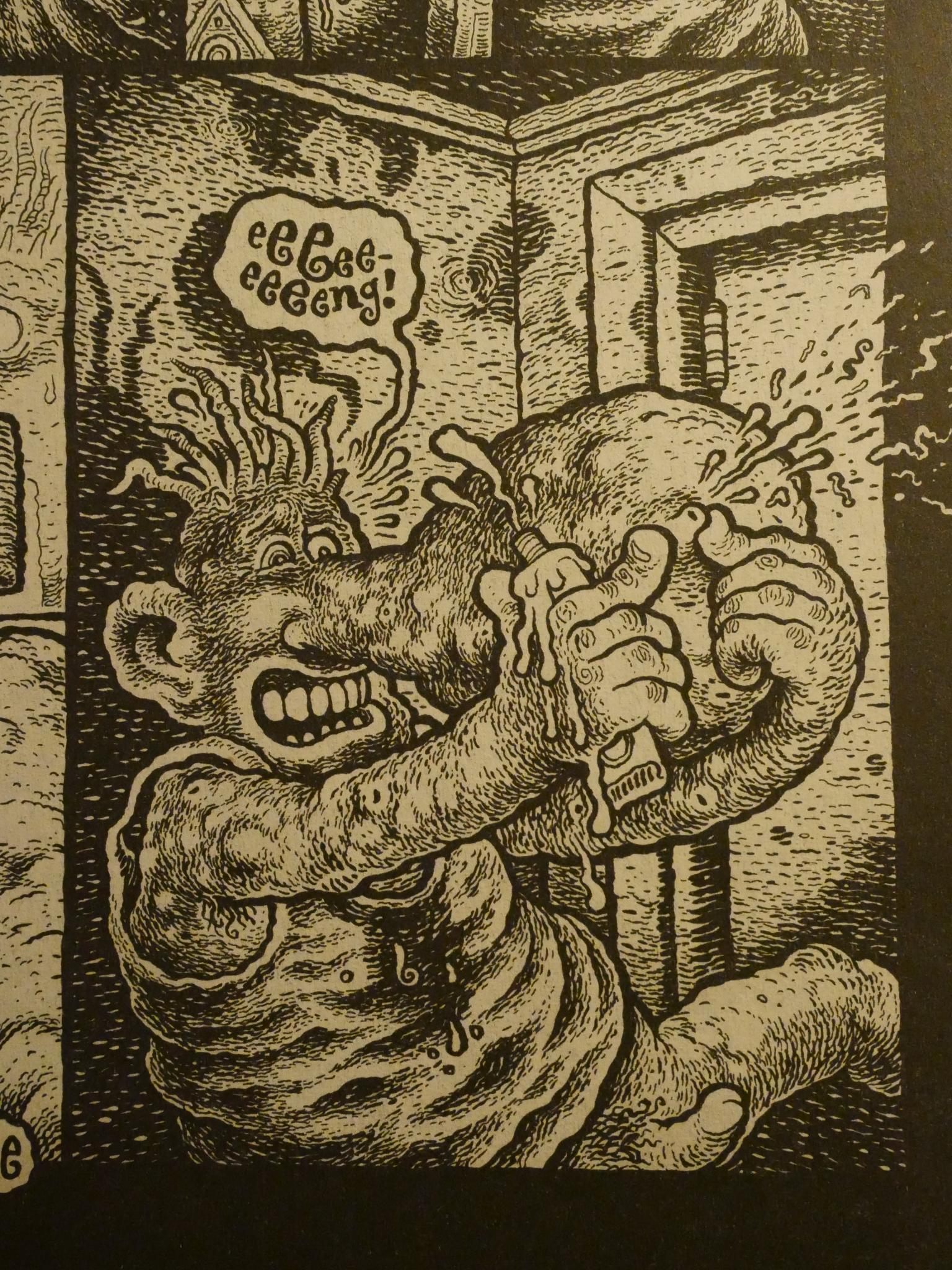 Cooper had published a number of series at various publishers (like A Big Someplace for Iconographix), and had appeared in all the comics anthologies of the time, but I think it was Pressed Tongue that made quite a lot of people start paying closer attention. 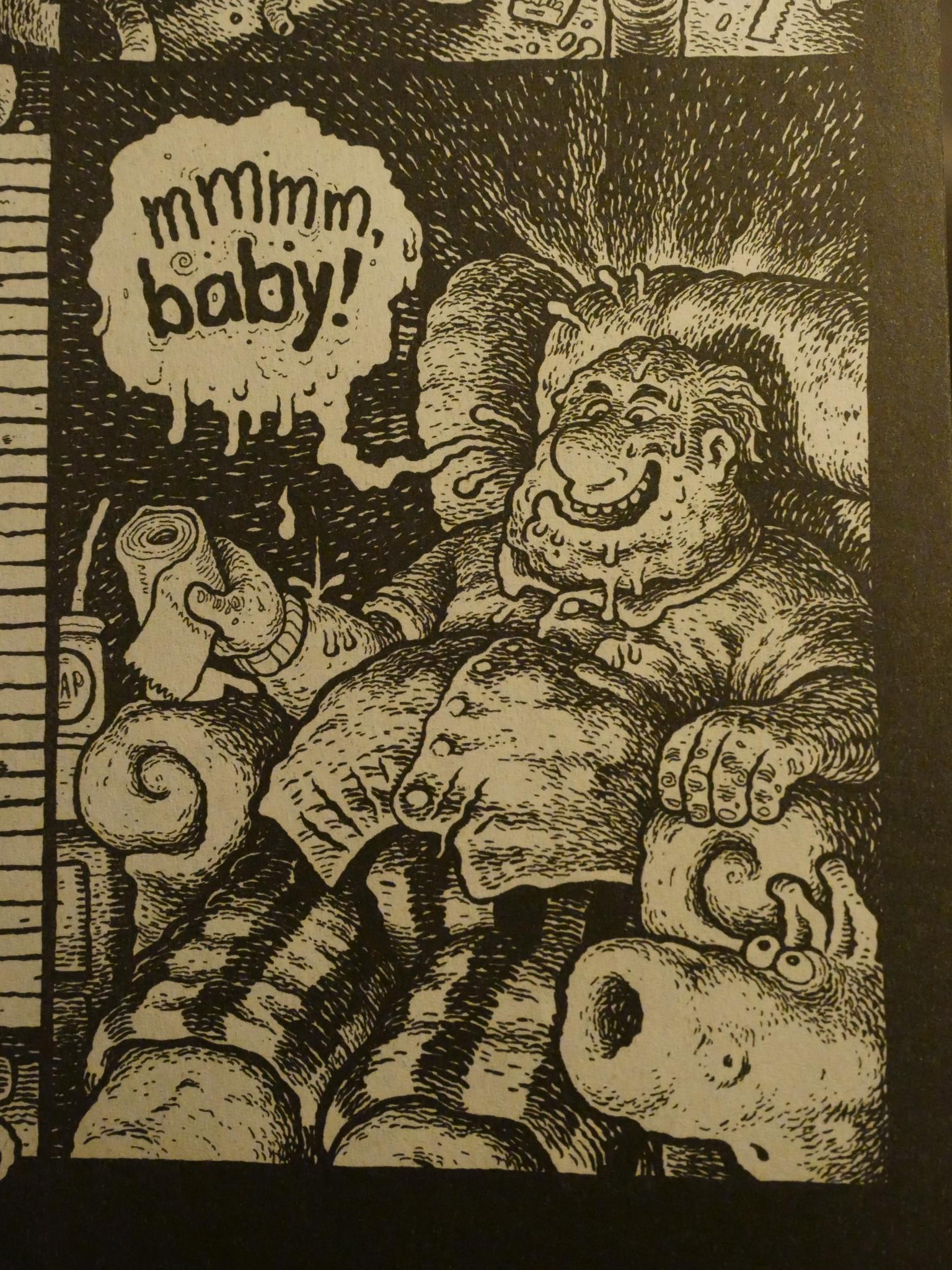 It’s drawn in this incredibly meticulous, expressive, ink soaked style.  While there isn’t much (or any?) explicit sex here, shipping it through Borderlinx caused the package to be stopped and pulped.  So Coopers sweaty art style is still unnerving for people in Ohio. 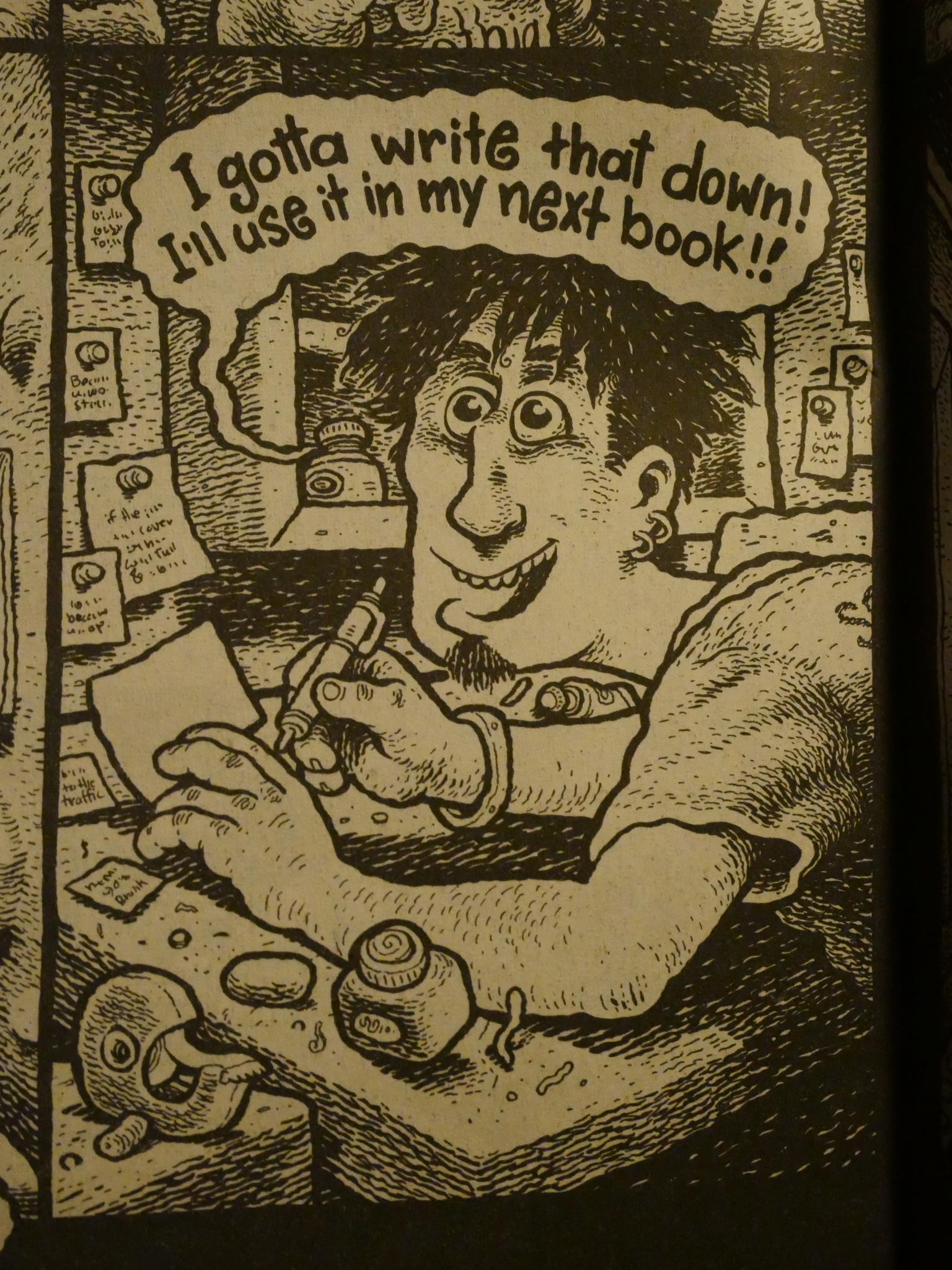 As in many of his stories, one of the protagonists is a comic book artist, and this one draws a comic book that quite resembles the one you’re reading. 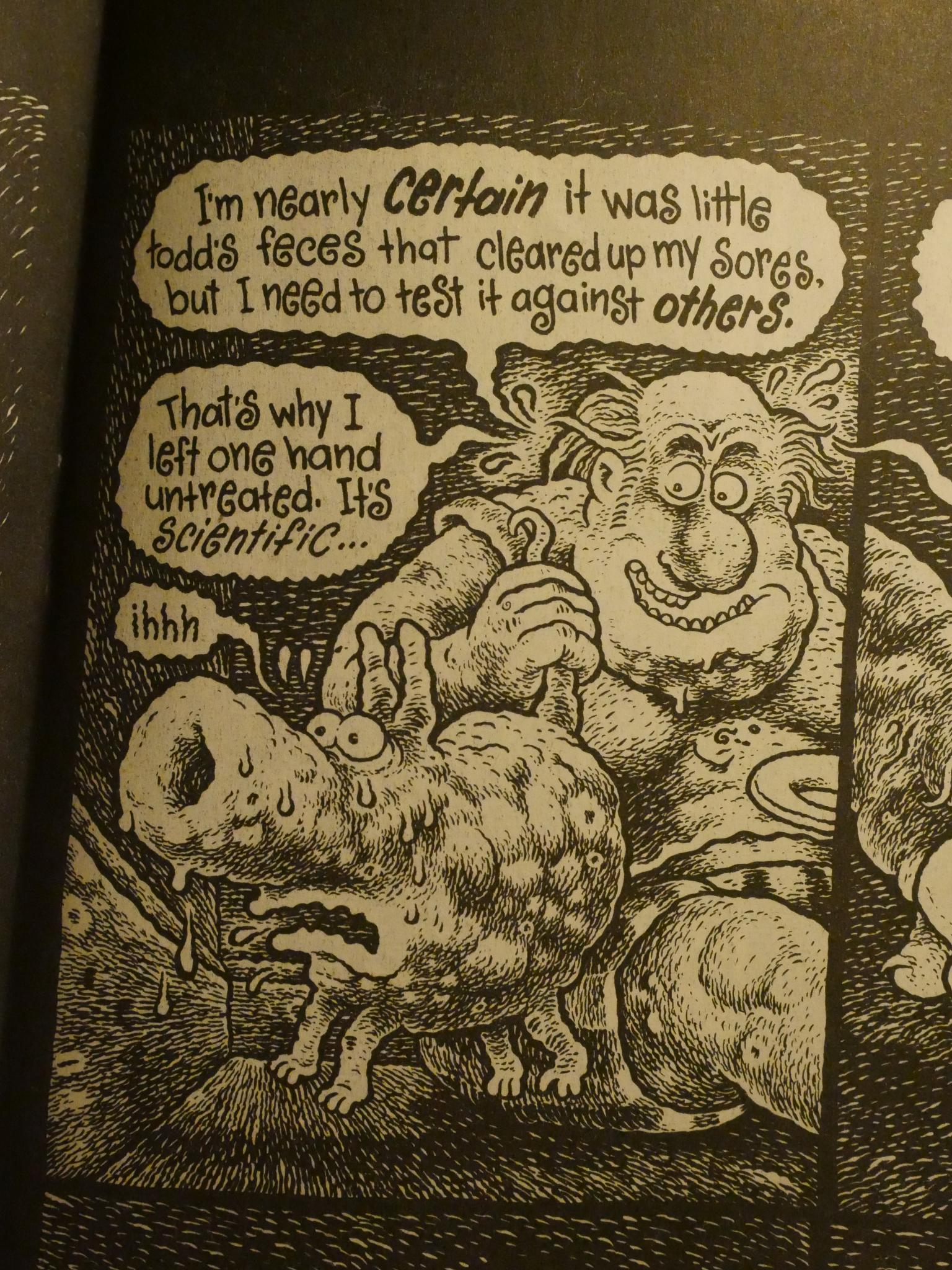 The book seems to start off with something resembling a normal 20s slacker plot (think Crap or Hate), but veers off into different lands only a few pages in. The central story is about that pus encrusted guy up there that discovers that if he smears the shit from the 20-somethings’ baby on his skin, then the faeces clears up his sores. 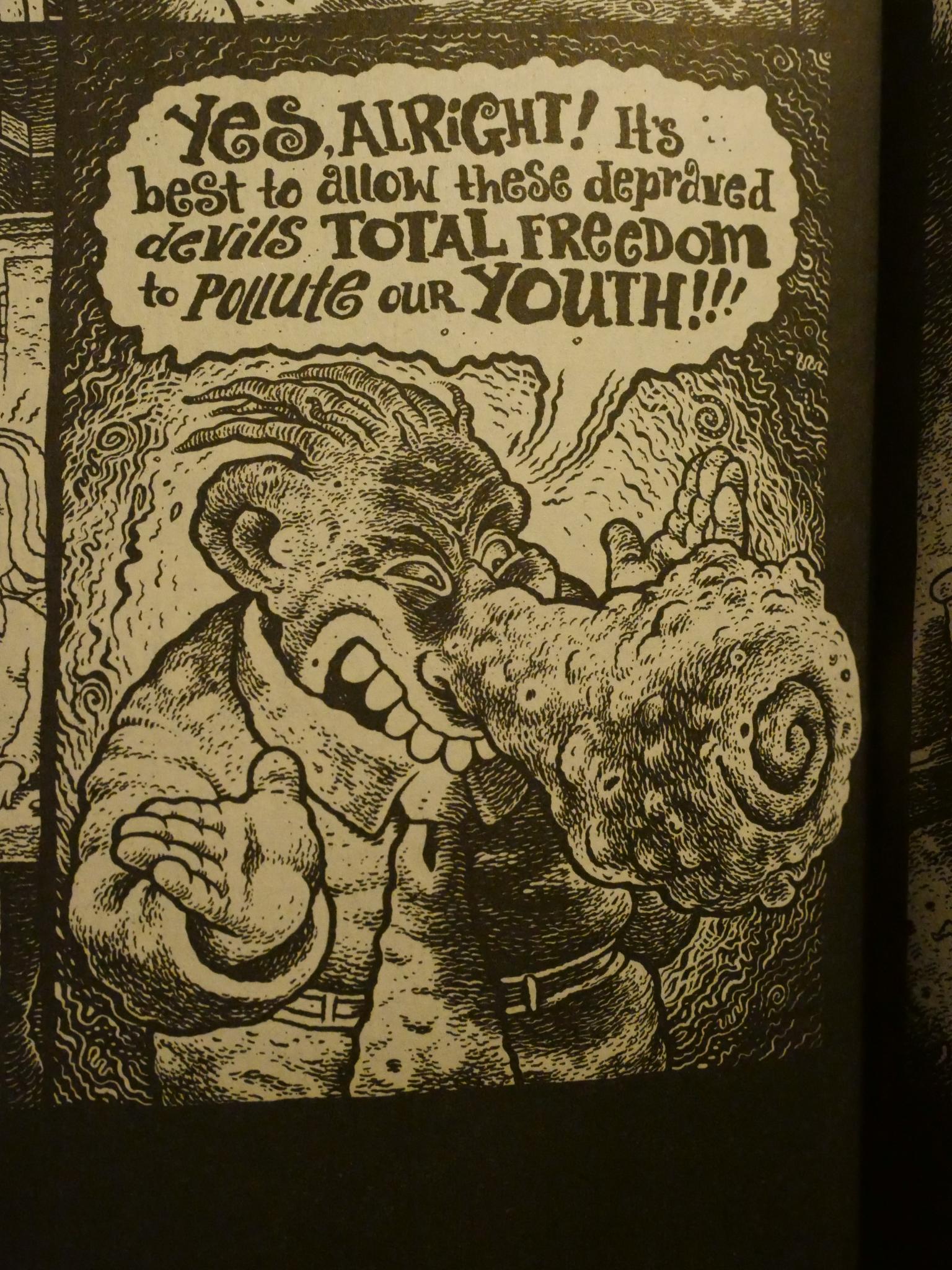 Most of the characters are drawn pretty much realistically, but this guy has a nose that keeps growing throughout the series into satanic proportions. 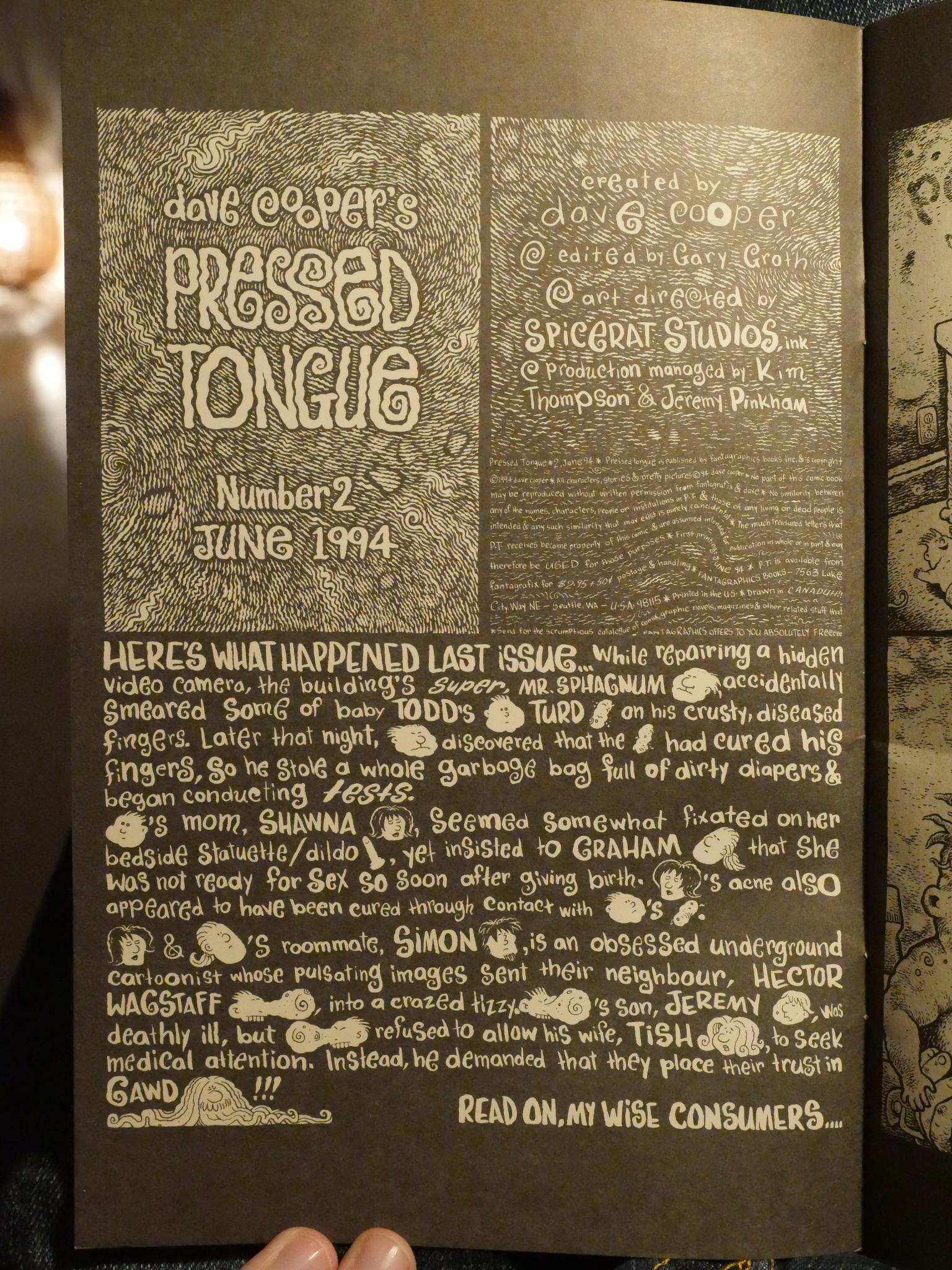 Both in Pressed Tongue and Weasel, there isn’t a single drop of ink on the pages that hasn’t been hand drawn by Cooper. 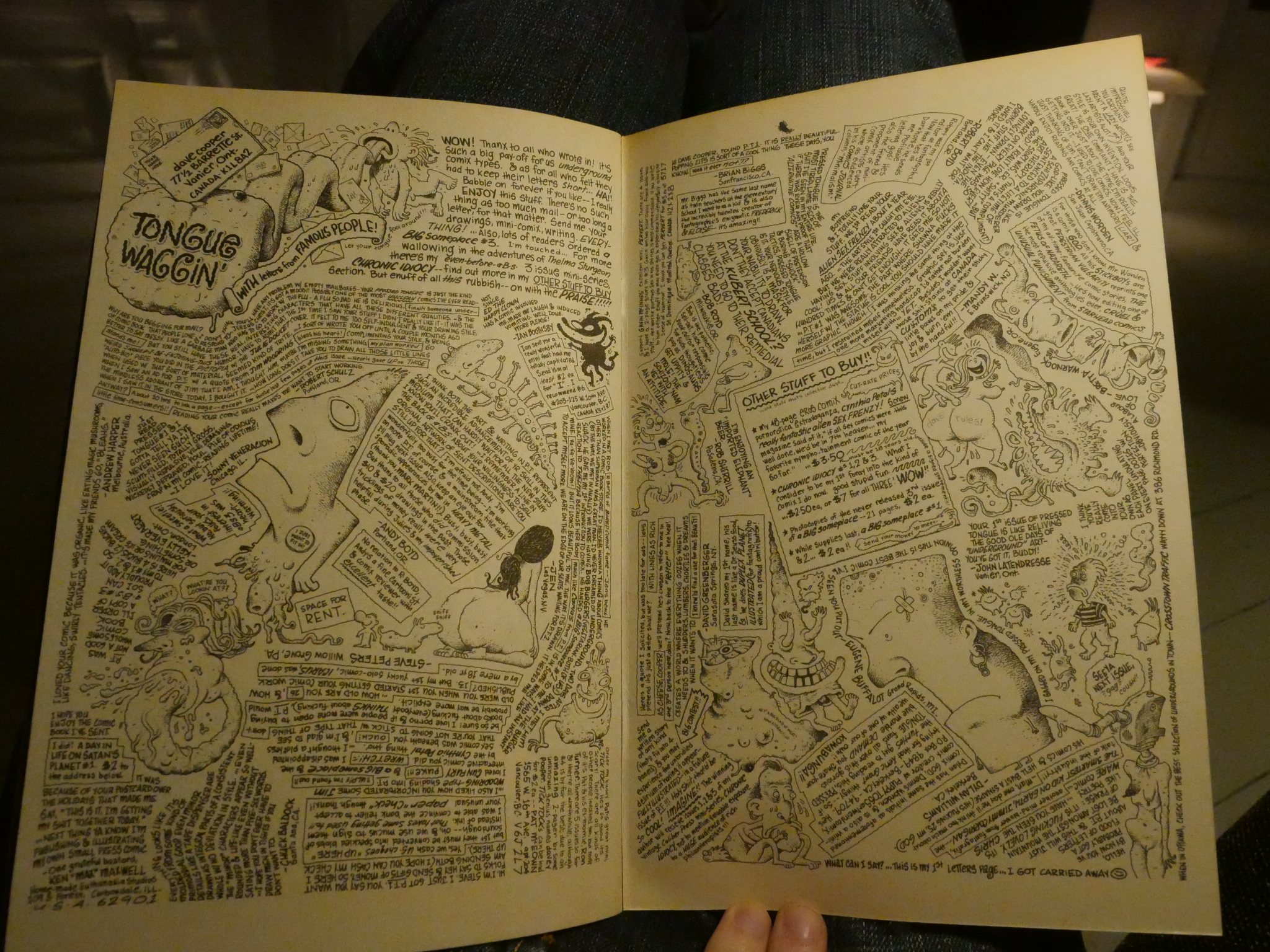 Look at this letters page. Just look at it. 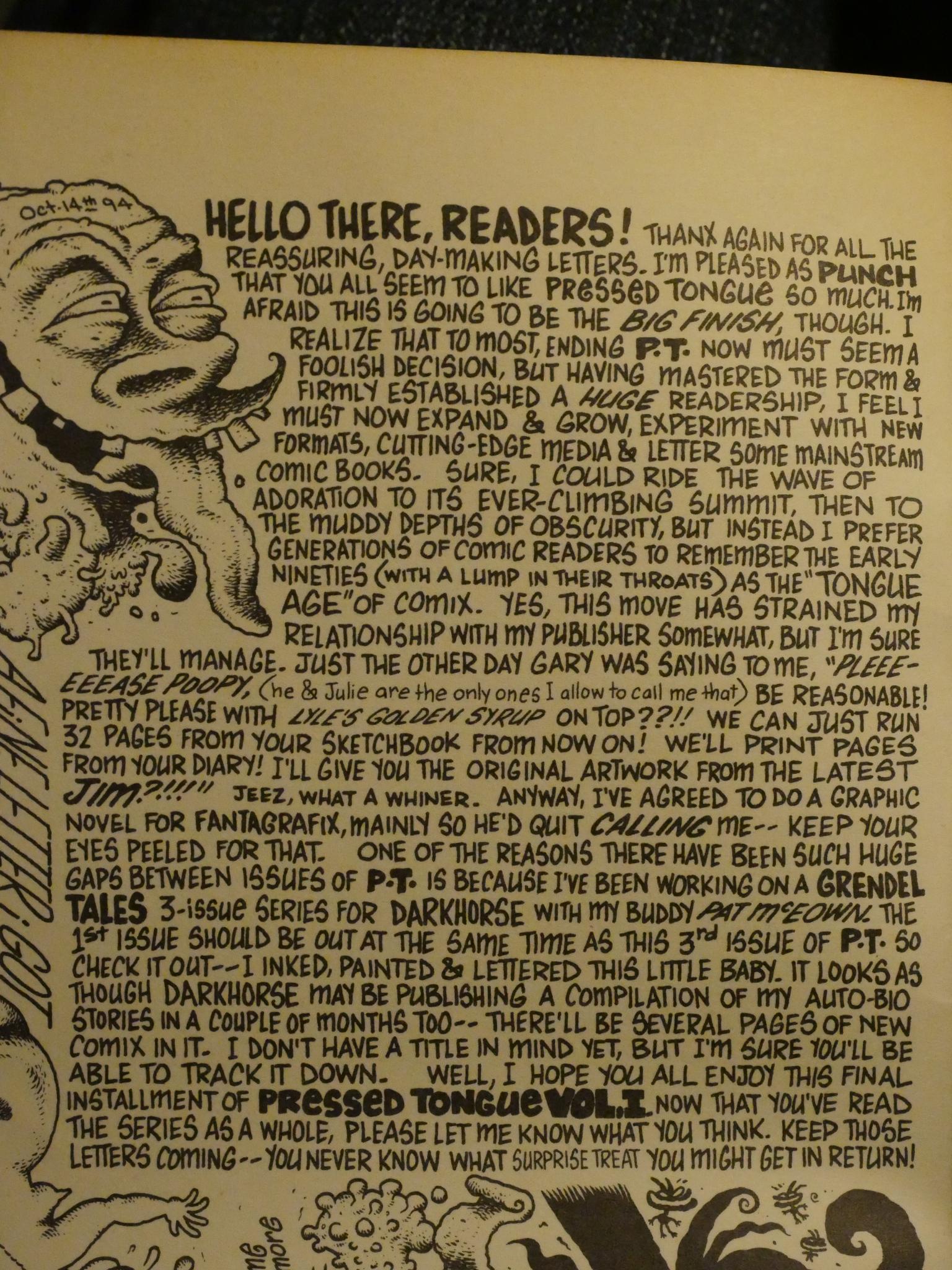 In issue three, Cooper announces that the series is coming to an end. And not for the usual reason for an alternative comic book series (i.e., low sales), but because the story is finished. Which took me by surprise, since it kinda seemed to be structured as a longer story… 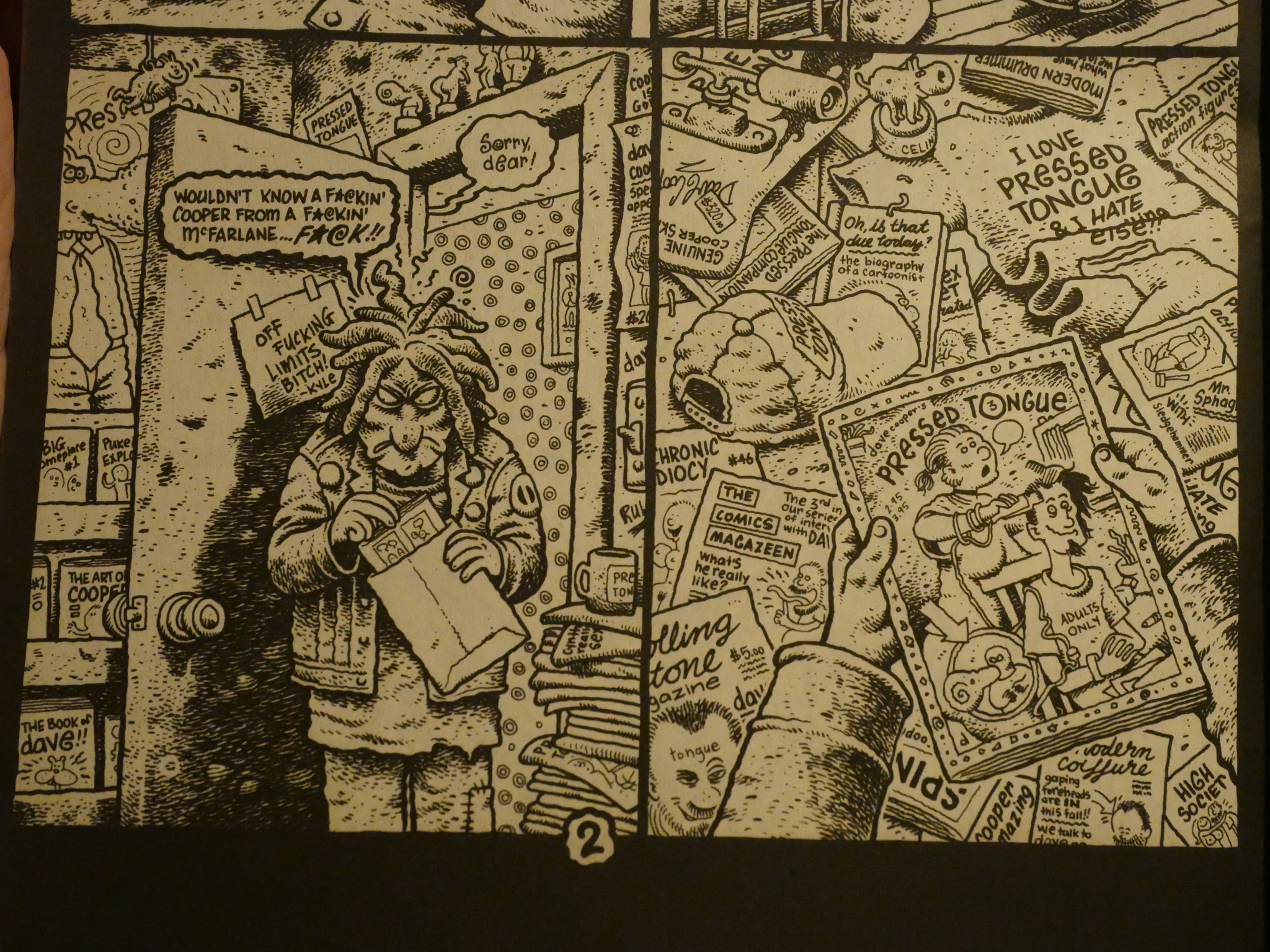 … but then Cooper wraps everything up in an ingenious way by introducing more overt metafictional elements like this fanatical Dave Cooper fan. 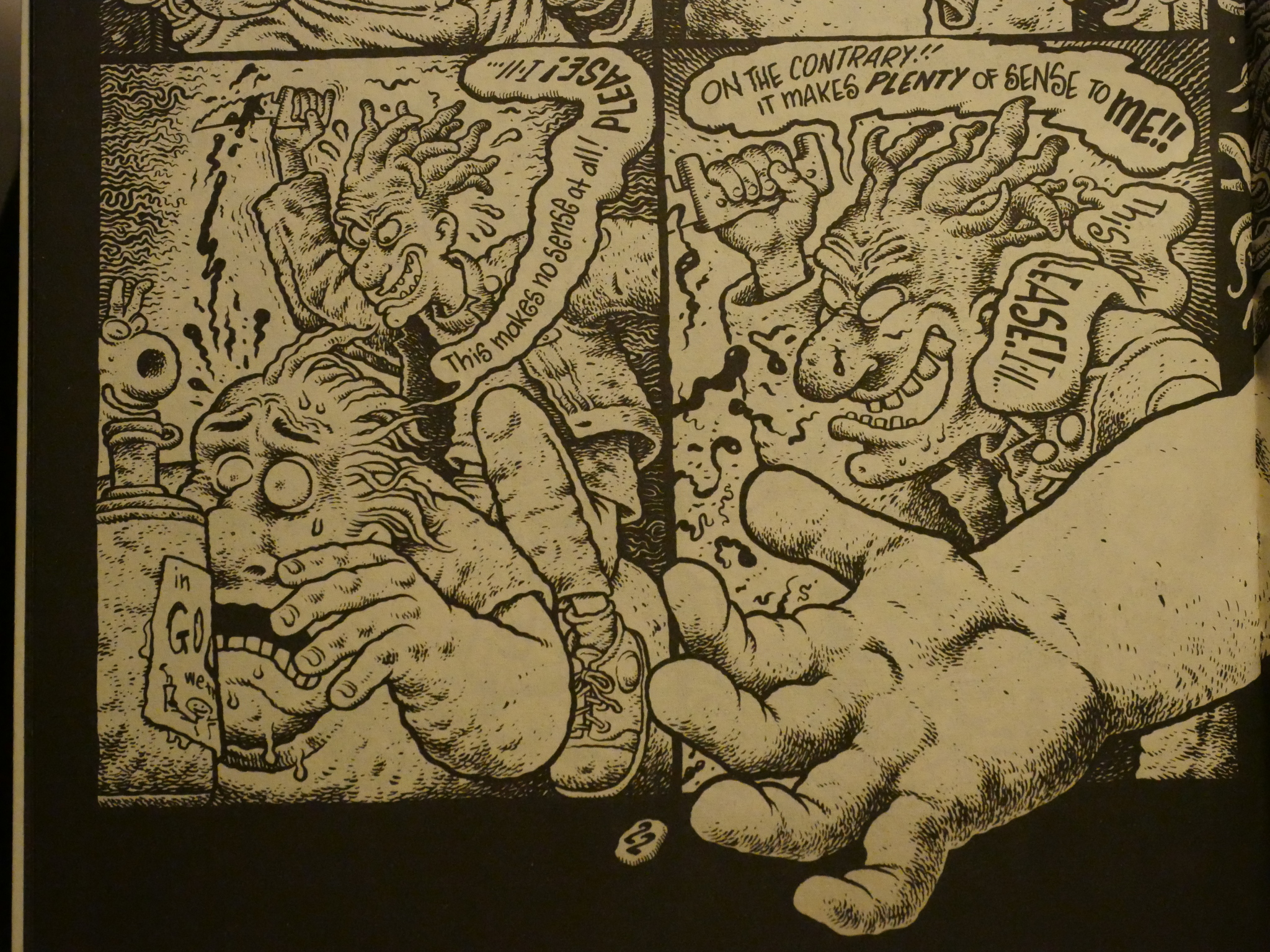 And, yes, the ending makes complete sense. In a kind of Lynchian sense, but by the final page of this issue (which is on the back cover), we have a very satisfying, and slightly unnerving, finish to the story.

I was extremely surprised.

After this, Cooper serialised the Crumple story in Zero Zero and released a few stand-alone books. Suckle? Something like that, but of these mid-90s works, I think Pressed Tongue is the strongest. And the rest aren’t bad, either. Cooper returned with a new series of floppies in 1999, this time called Weasel, and in a very handsome, smaller, almost-square format. Physically, these are quite attractive objects, exquisitely designed. And instead of doing a single story, Weasel was designed as a classic single-author anthology, where Cooper could just dump all of his projects. 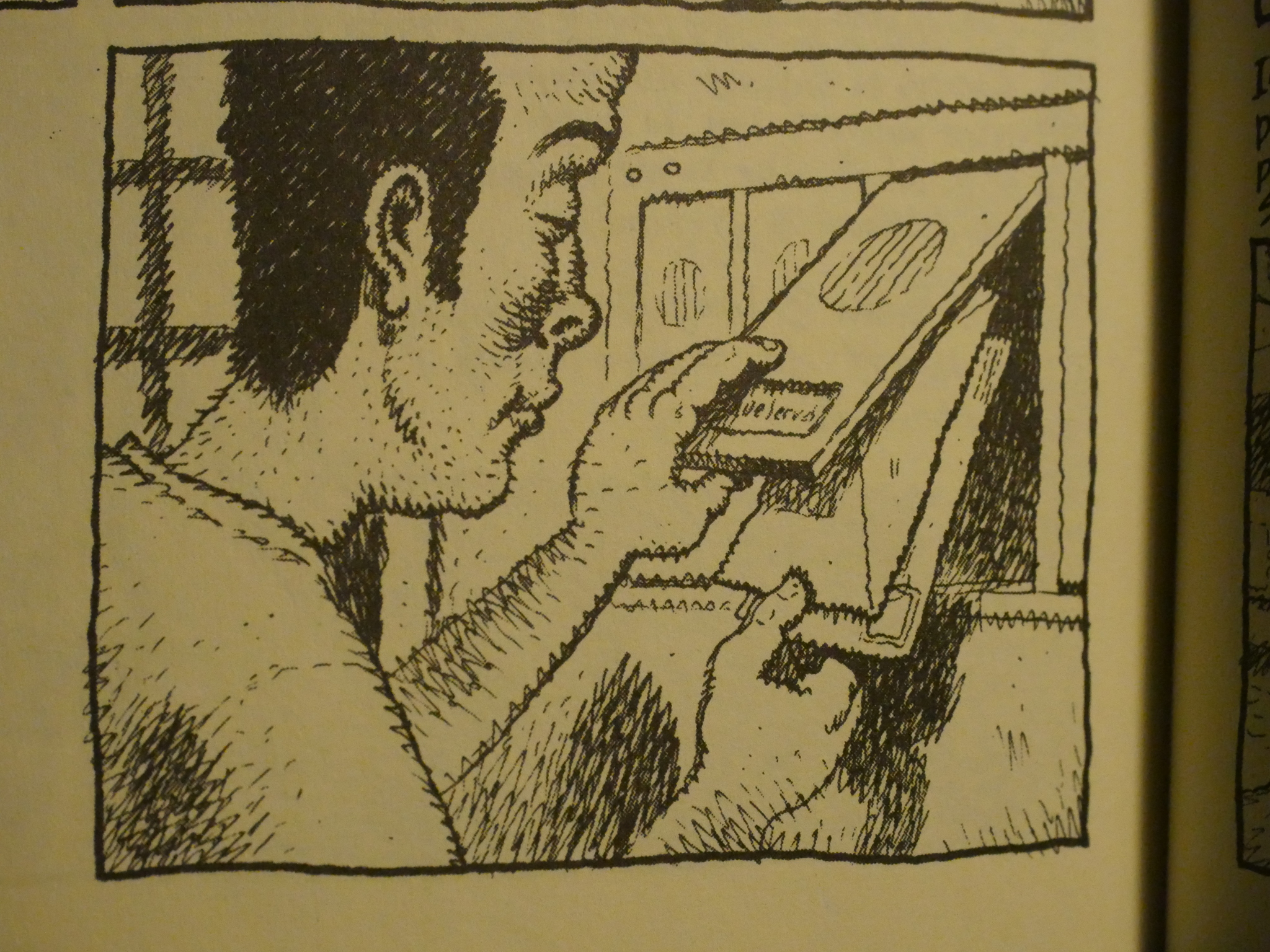 However, the main serial, “Ripple, a predilection for Tina” was to take up the vast majority of the pages. Cooper’s drawing style has changed dramatically from the Pressed Tongue years. Instead of the relentlessly overworked panels, we here get this sketchy, scratchy line that I really like. I love the way he’ll fuzz up almost all the lines with those zig-zags. 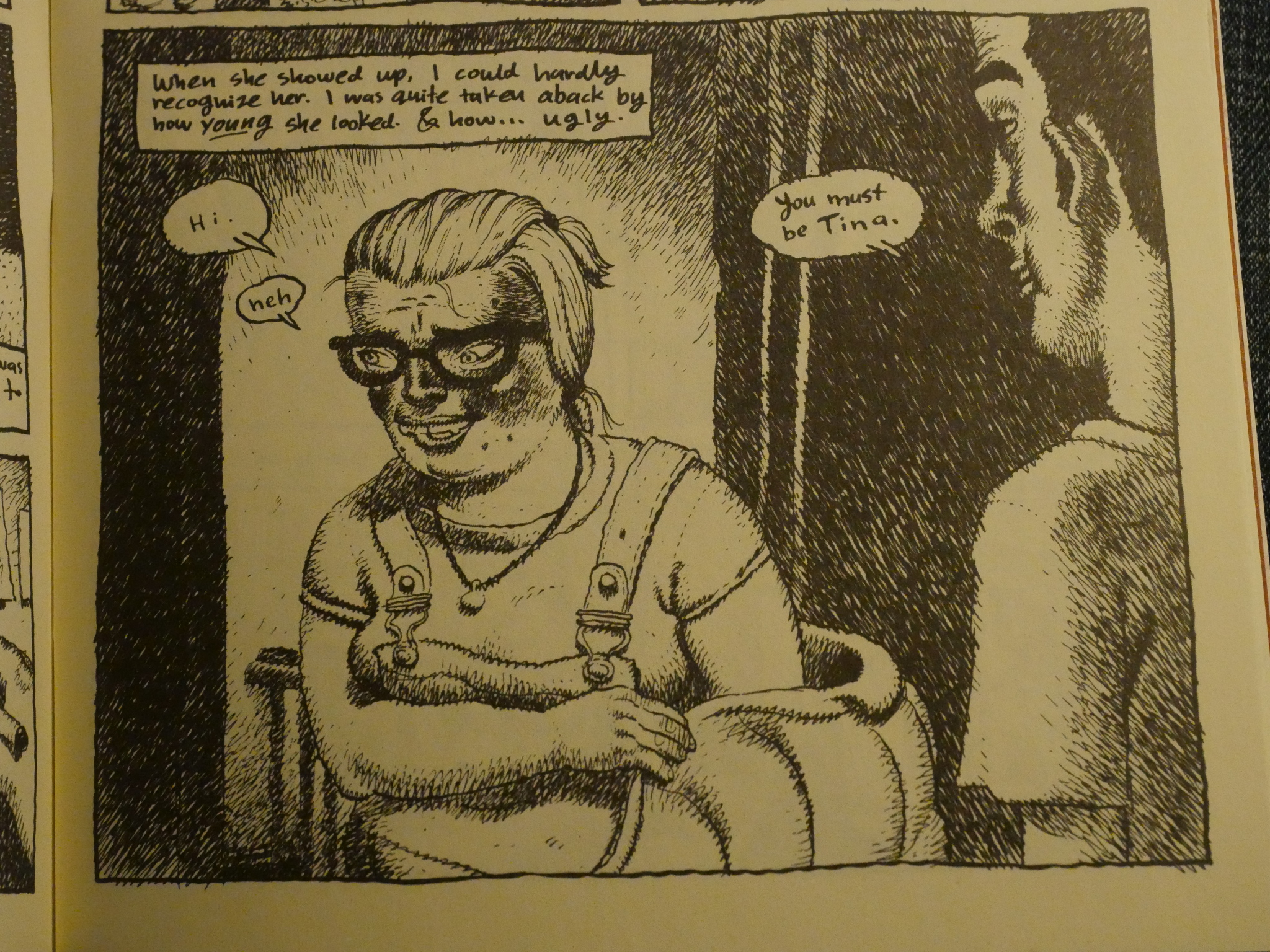 And this time, there’s no overt horror or fantasy elements, but a pretty straight-forward story of sexual obsession. 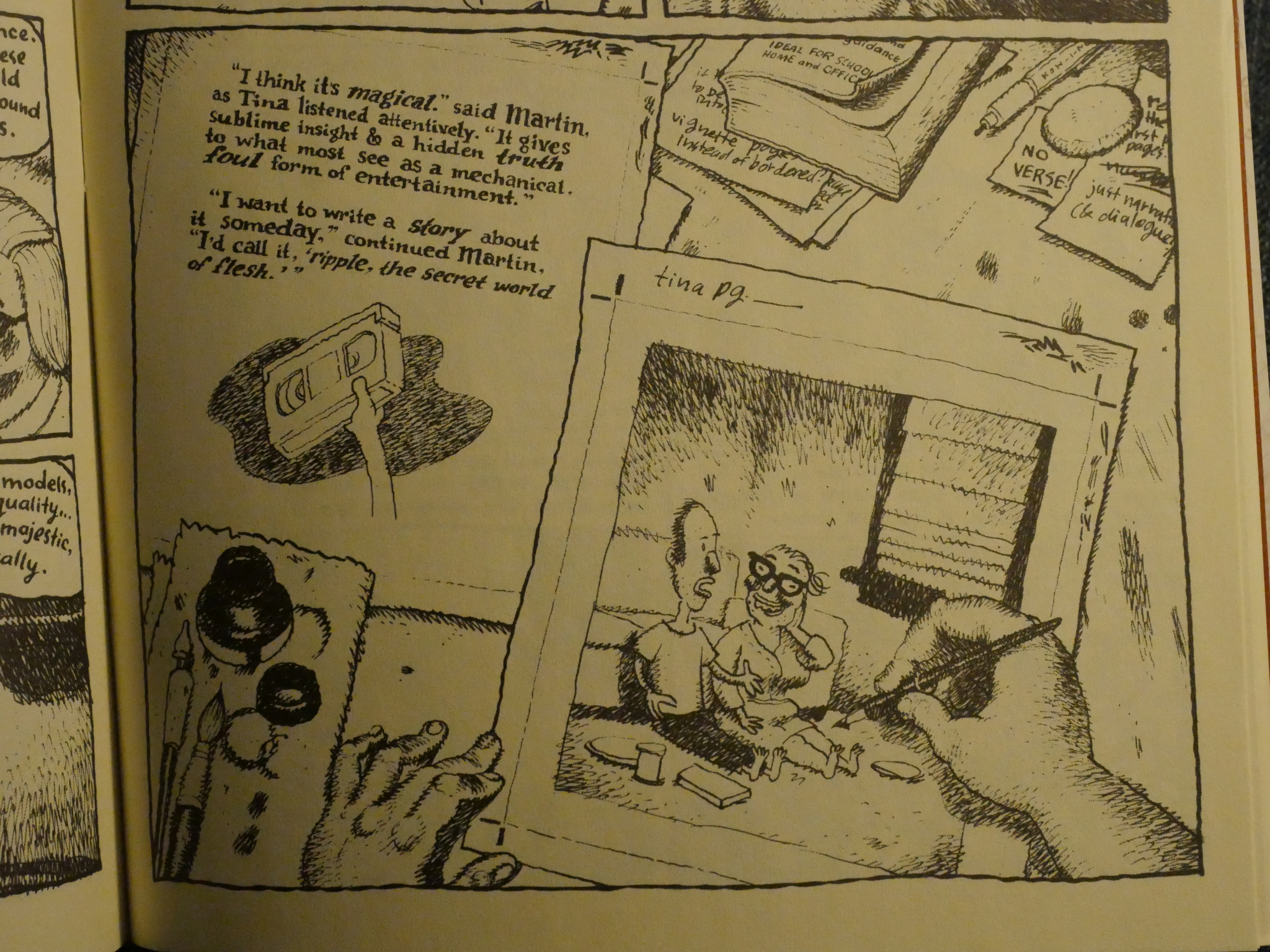 The protagonist is a cartoonist, of course, and the framing story is about him drawing the story that we’re reading. 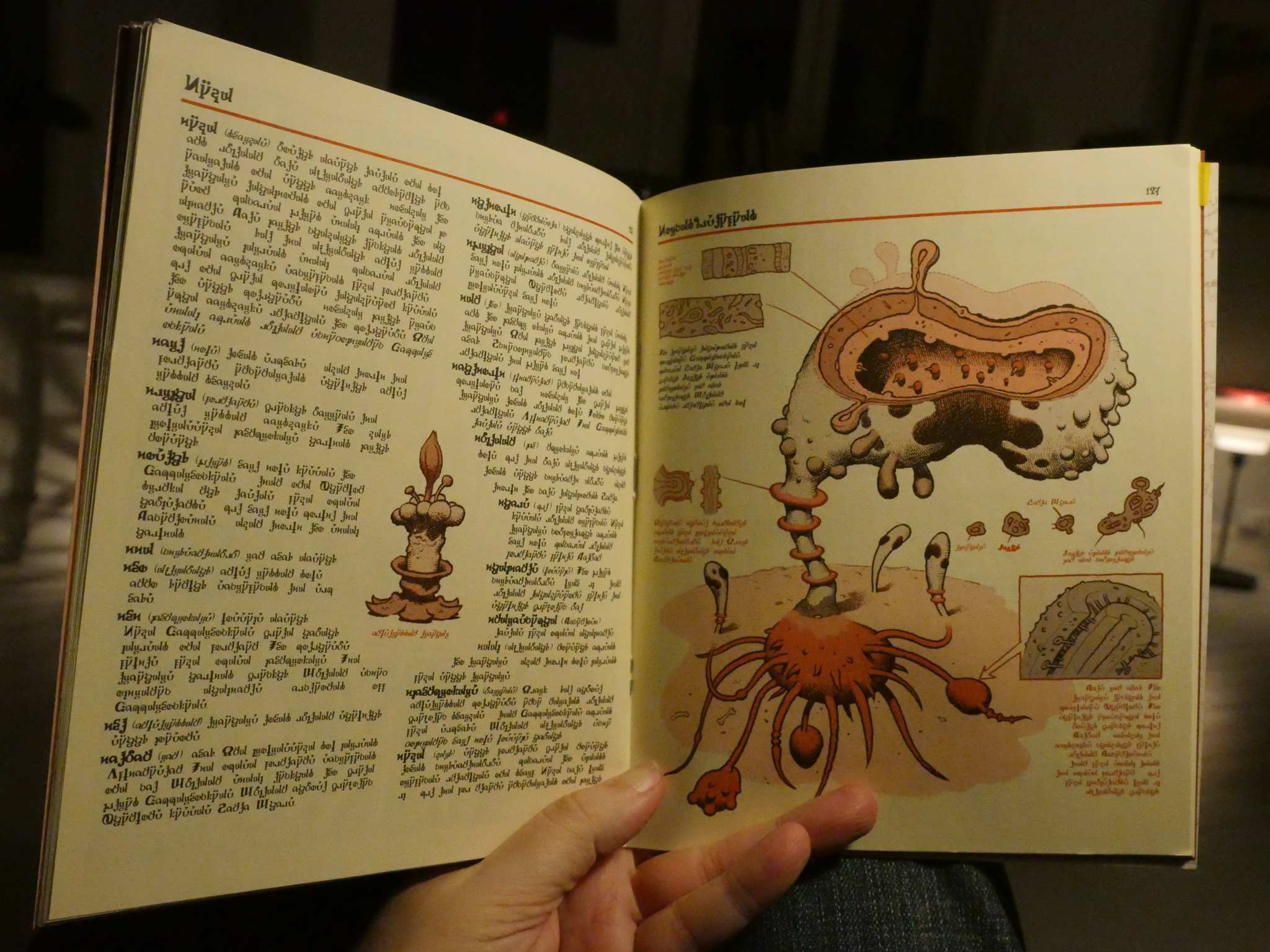 There are shorter backup features in each issue, though. The most puzzling one is this encyclopaedia in this apparently made-up language. It goes on for pages and pages. I suspect a lot of pot smoking is involved. 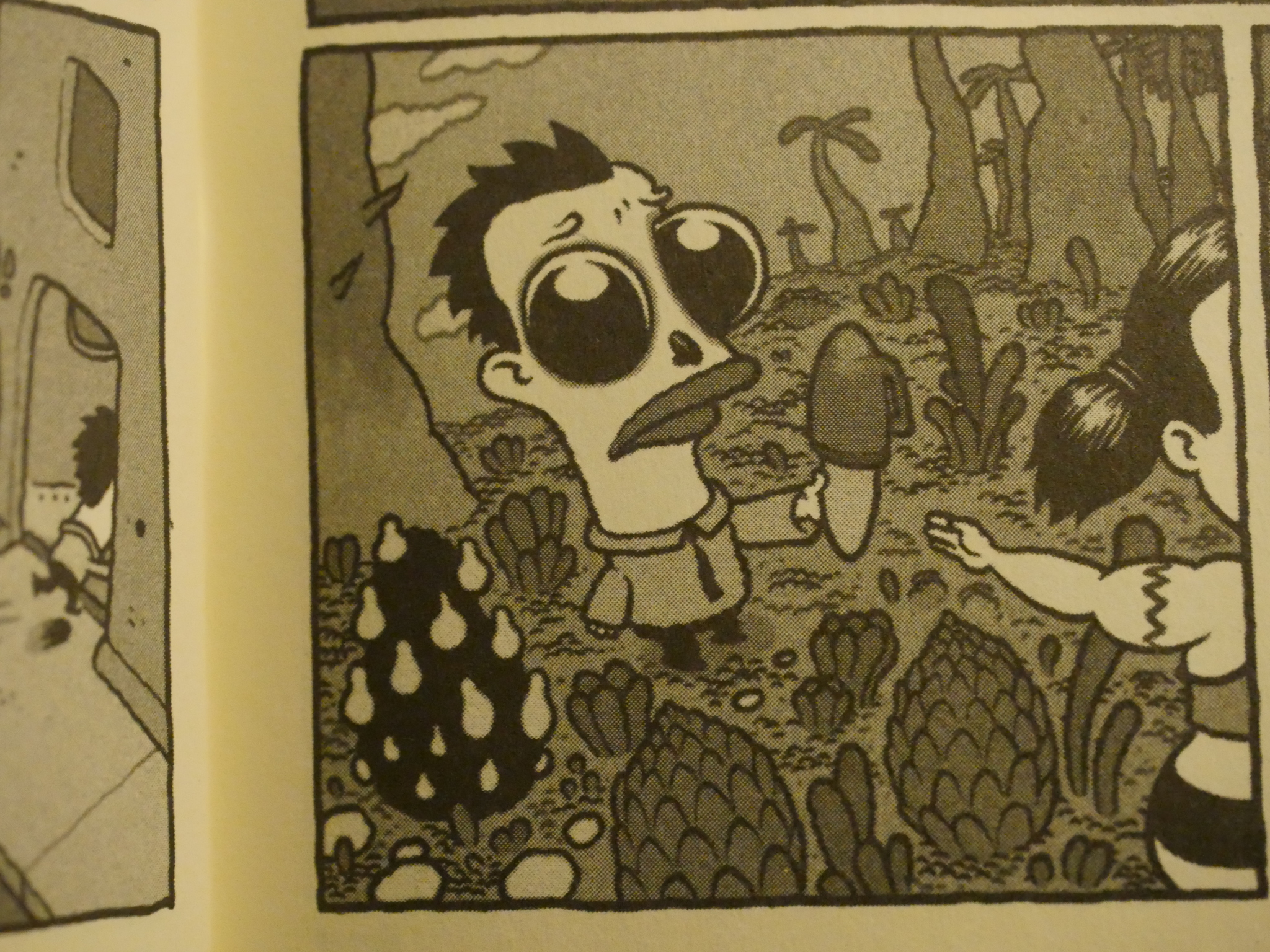 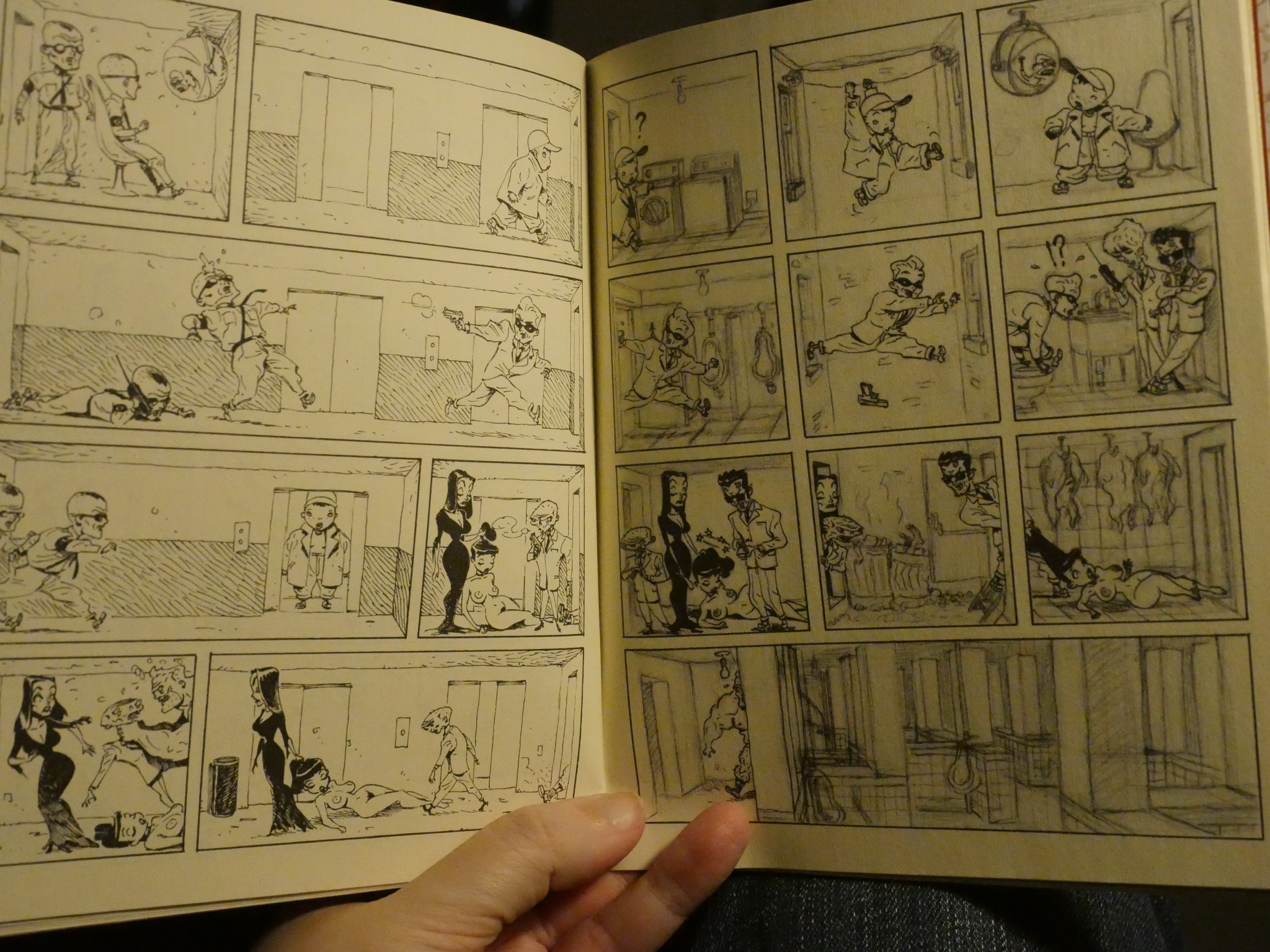 Pat McEown contributes this spiffy piece that has a lot of concurrent stories going on at the same time. The rows on the pages are both rows of panels and floors in a house, and some of the stories are told left to right, and some are right to left, and sometimes they change floors. It’s fun. There’s quite a bit of sex in Weasel, and most of it’s not very pretty. Very moist. Pat McEown explains why he won’t be appearing in any further Weasel issues. Cooper’s characters are incredibly expressive. Have a look at that dissatisfied coffee drinker up there, and that glowing nerd. Perfect. And look at that angry, jealous nerd here. Weasel won the “best new series” Harvey award that year, which is understandable. Mike Mignola draws an apparently non-narrative piece where the script is the same as used in that imaginary encyclopaedia. Very odd. Then Cooper announces that he’s ending Weasel in its current incarnation, and again he manages to finish his storylines. So many alternative series just stop instead of having an ending, so I really appreciate Cooper sticking to his guns. I would not normally think that Cooper’s work would lend itself to franchising, but if you were to make a toy from his characters, it’s probably a better choice, commercially, to go with Eddy Table instead of that pus-filled nose guy from Pressed Tongue. The final two issues of Weasel are squarebound books collecting paintings and drawings “of mostly pillowy girls”, as the covers say. And that’s what they are: No comics inside. With a fold-out centerpiece that’s, I think, the best thing in these books.

I don’t think Cooper has created any comics after Weasel was finished. At least I’m unable to find any trace of that on the web. Instead he seems to be a full-time painter and illustrator. He’s such a good storyteller, so that’s a disappointment to me, at least.