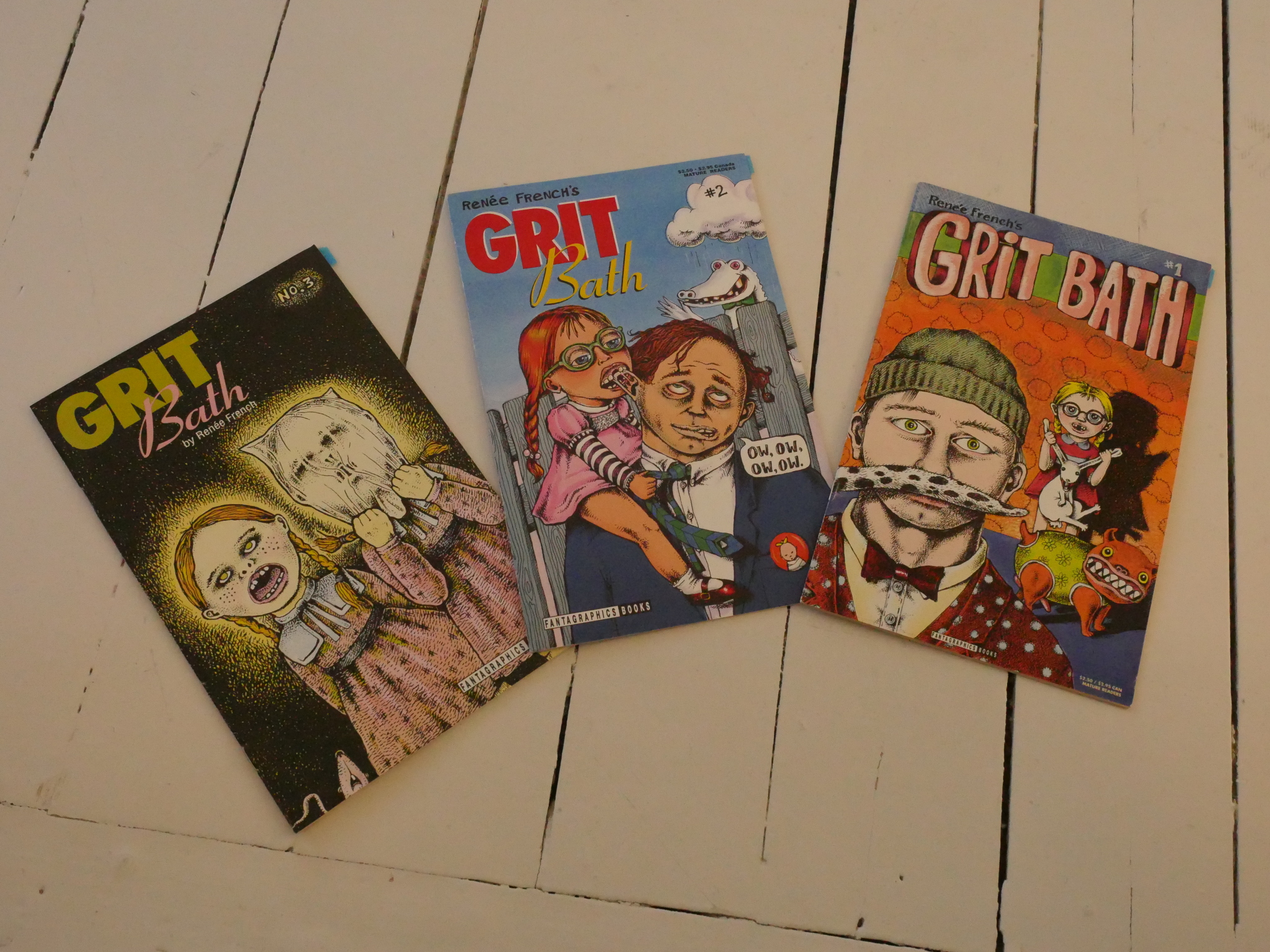 Renée French always felt to me like a part of a mini-movement within alternative comics that upped the body horror stakes beyond what was, perhaps, reasonable. I’m thinking of artists like Al Colombia and Dave Cooper, that all mix childish whimsy with horrible, horrible squishy horror. They’re all sort of children of Jim Woodring, perhaps, but off the curb. 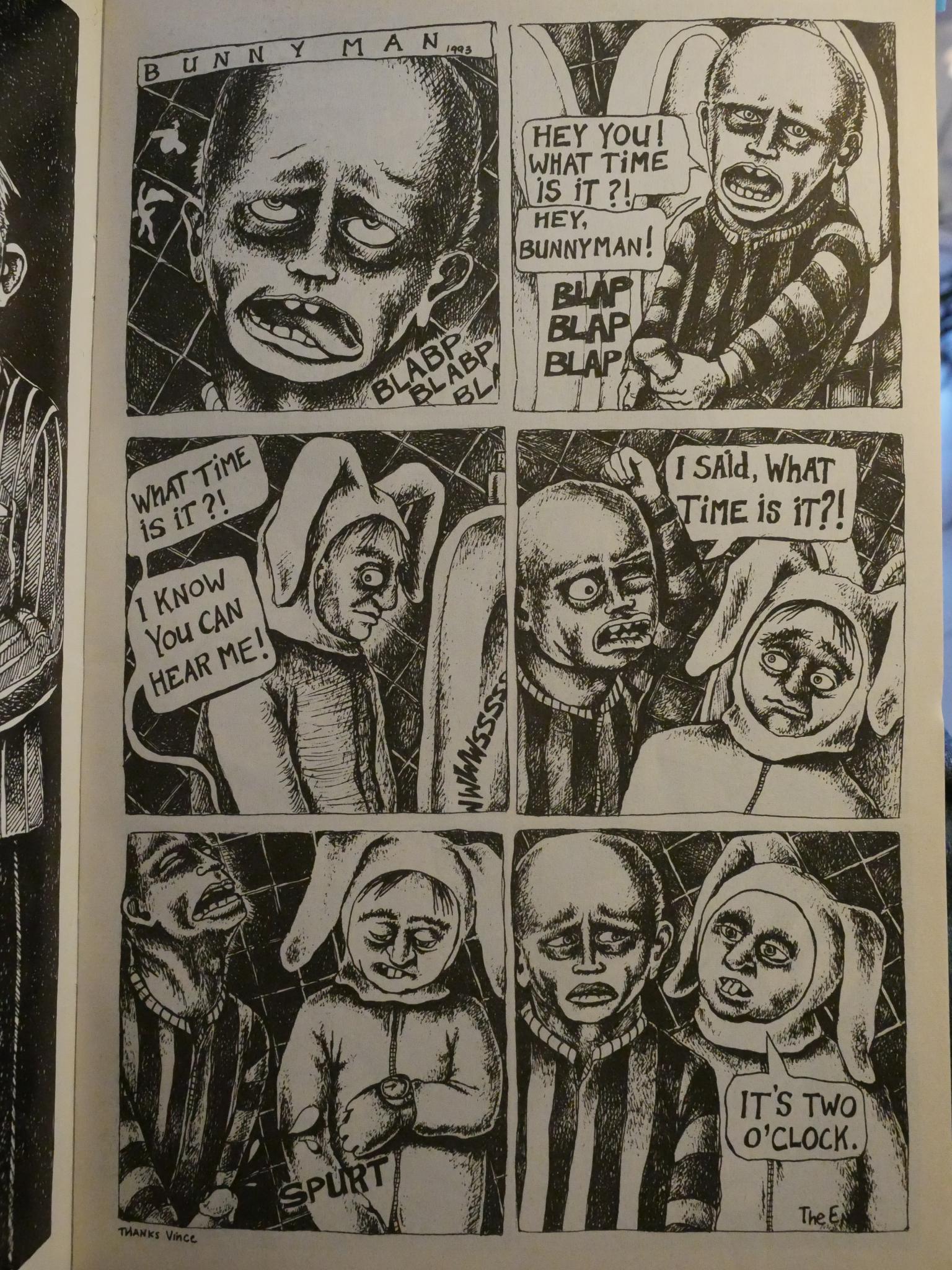 French uses this elaborate pointillist drawing technique with a shifting, restless camera. Things are often askew and weird. And somehow the humour makes it even more creepy. 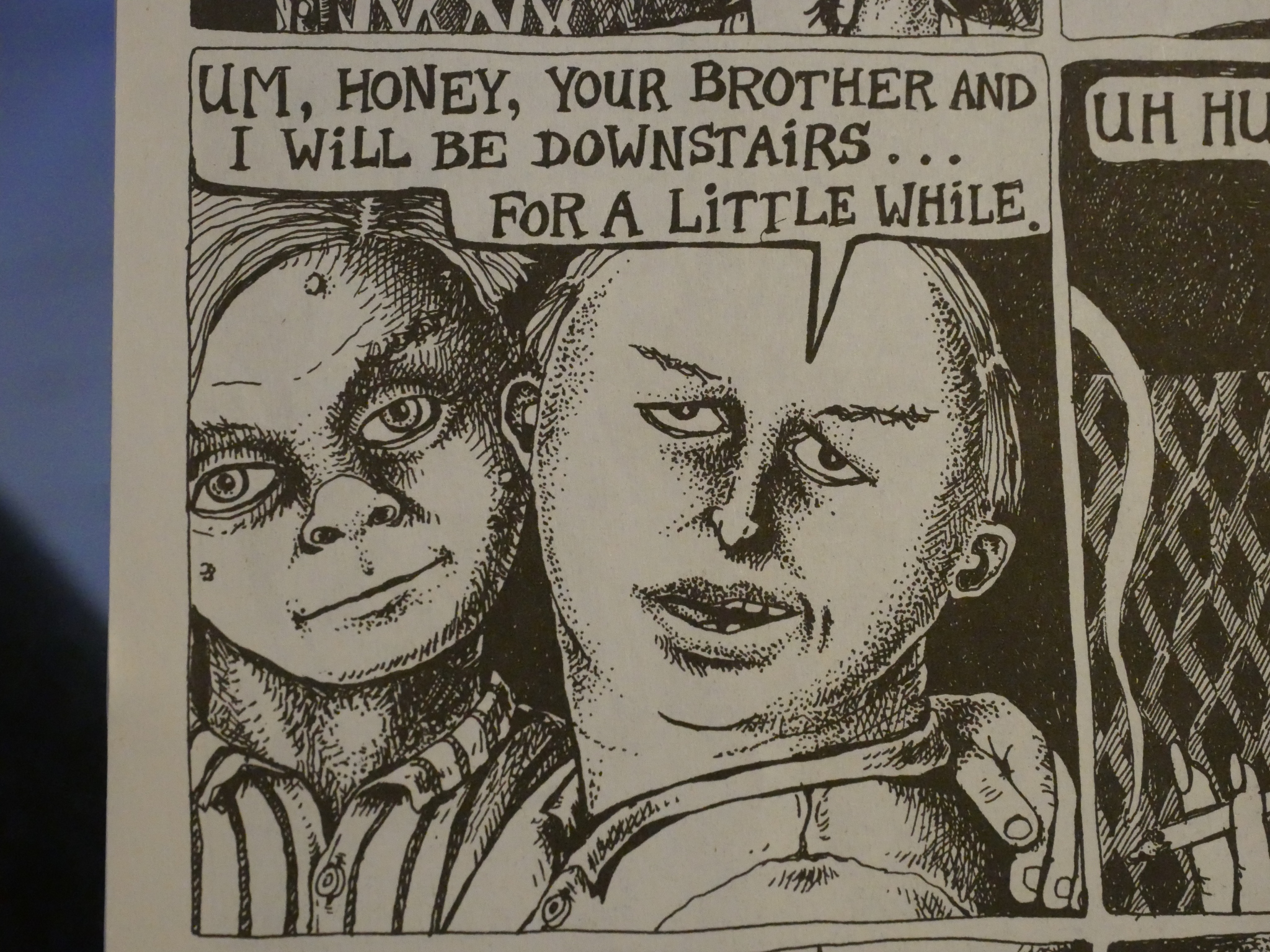 French appeared in most of the major anthologies in the 90s, and usually provided the most shocking piece in anything she appeared in. Grit Bath, though, takes things to another, unhinged level. 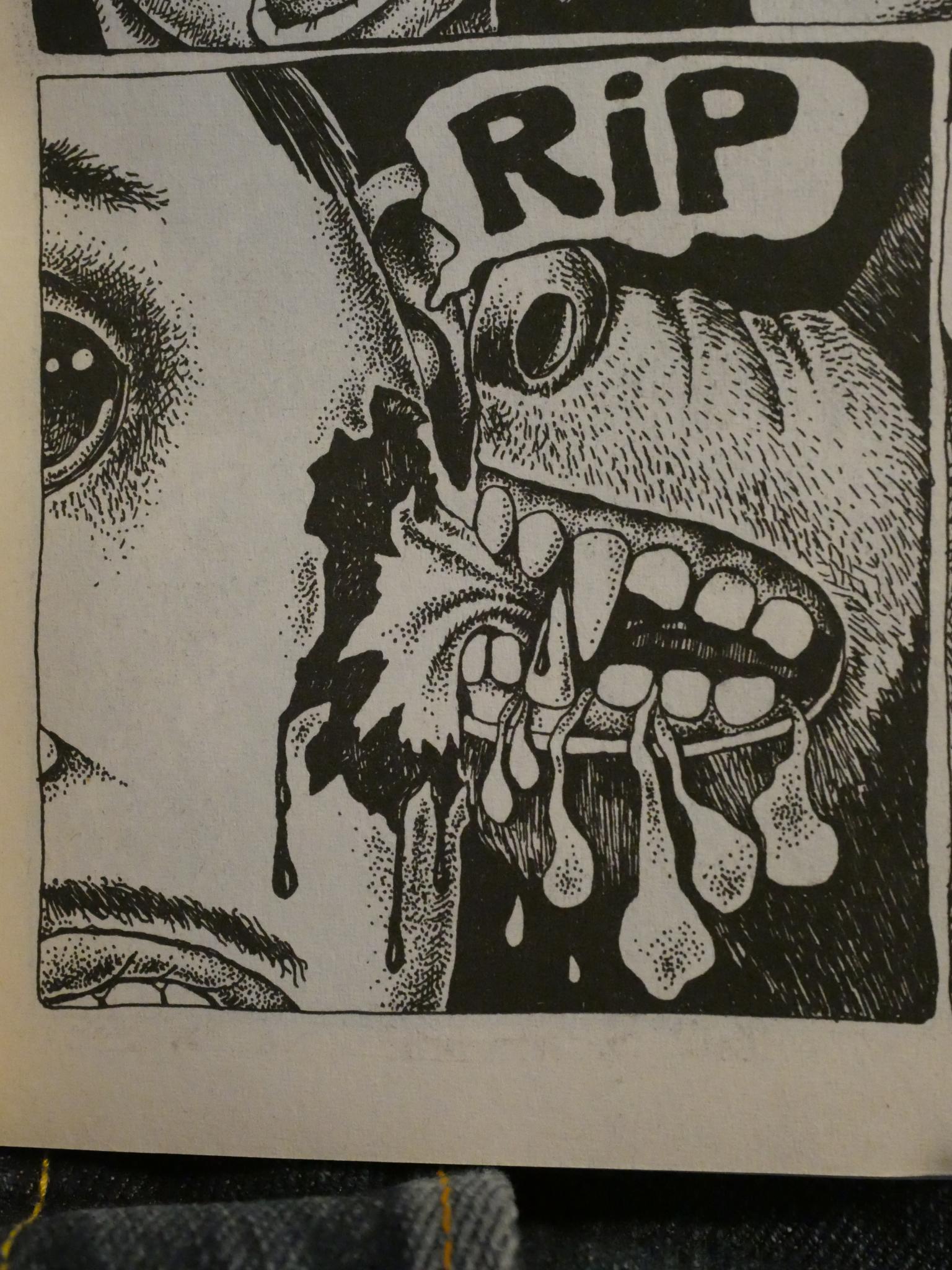 Since this is a family oriented blog (I’m not saying what family, though), I’m not including examples of the really, er, offensive stuff, but the main serial in these three issues involves a lot of bitten-off body parts and attempts to sow them back together again. 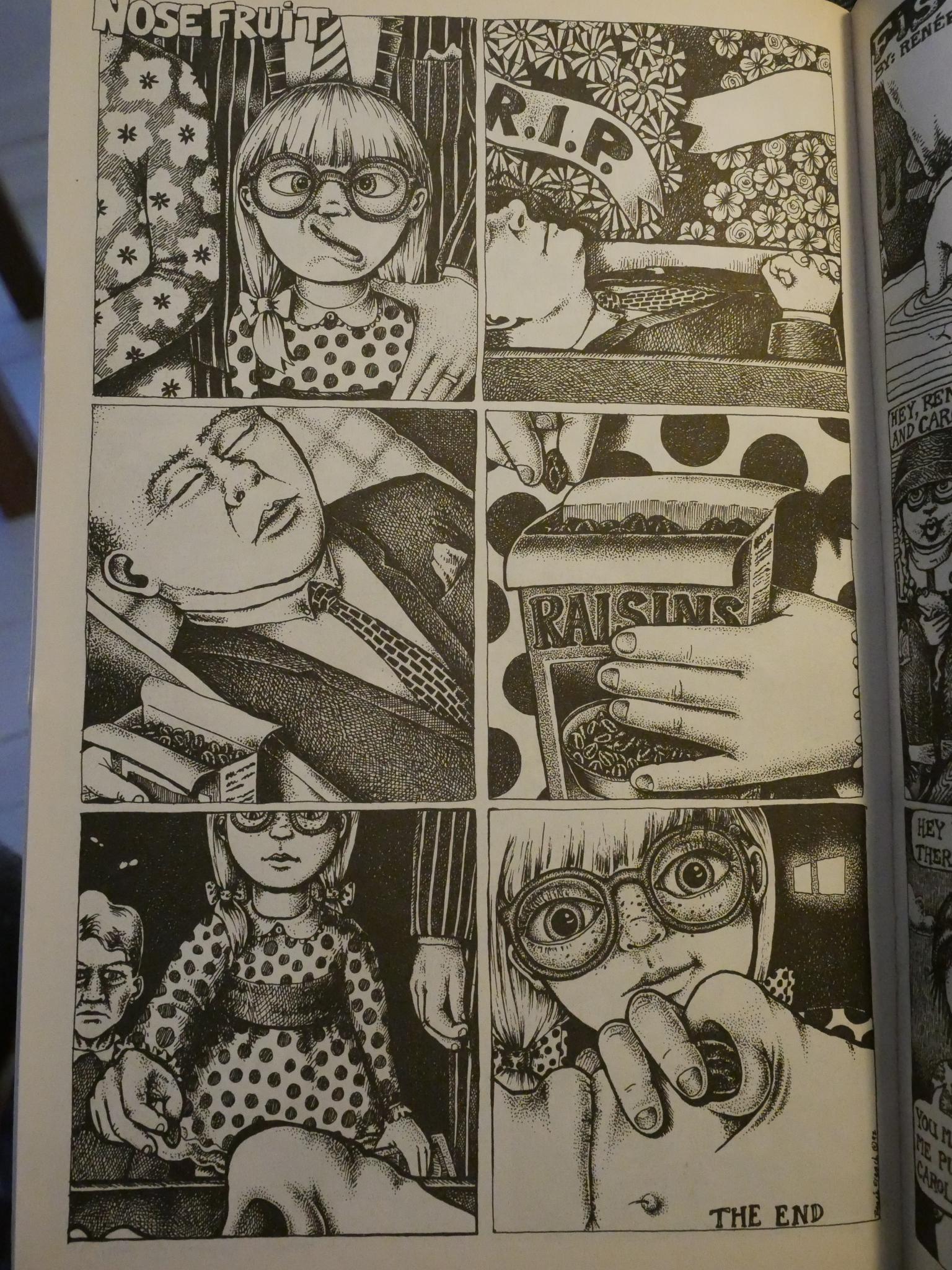 It’s not all over-the-top gruesome stuff, though. Isn’t this touching? 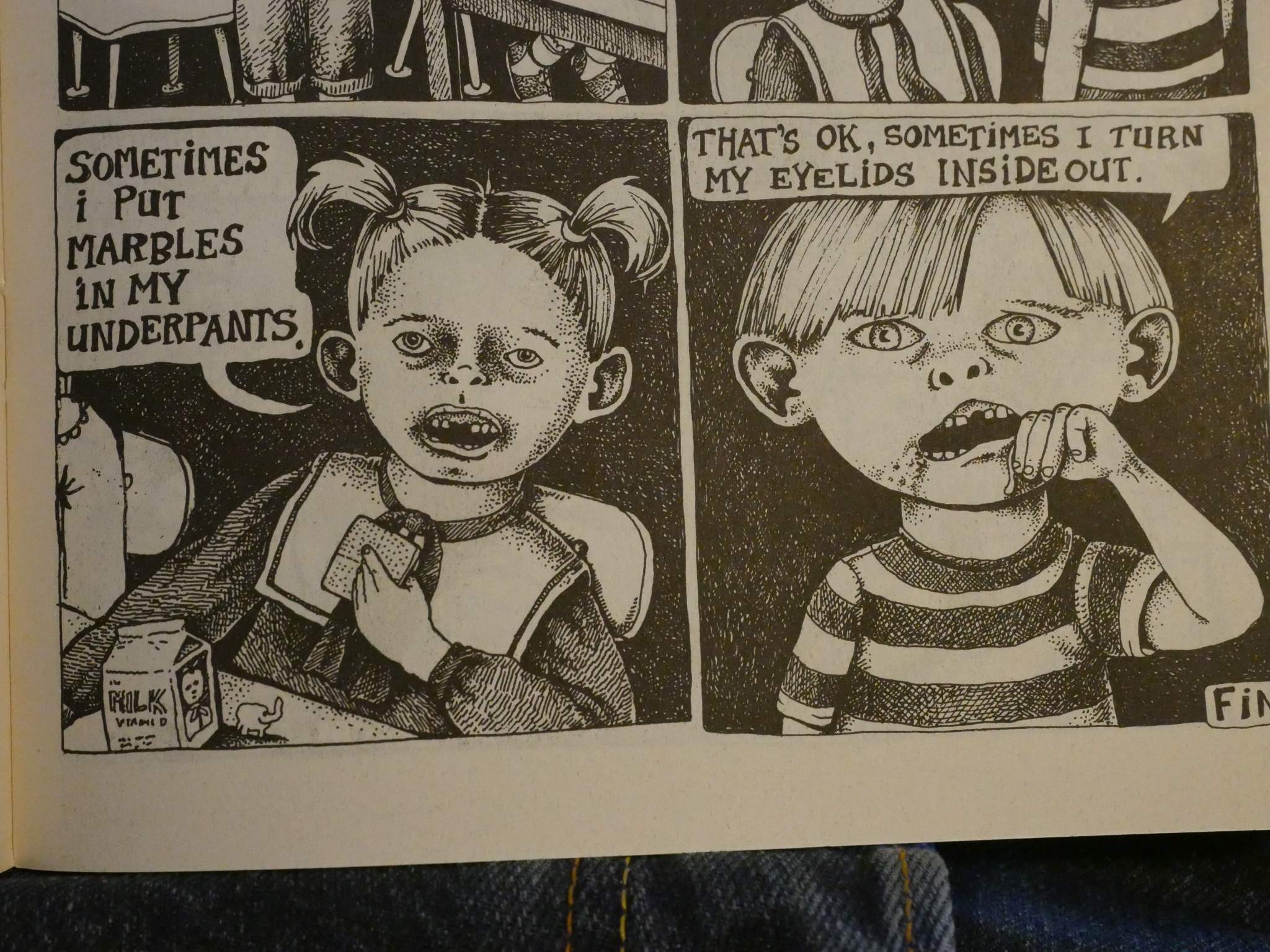 I’ve read most of her books, and they’re all pretty disturbing. 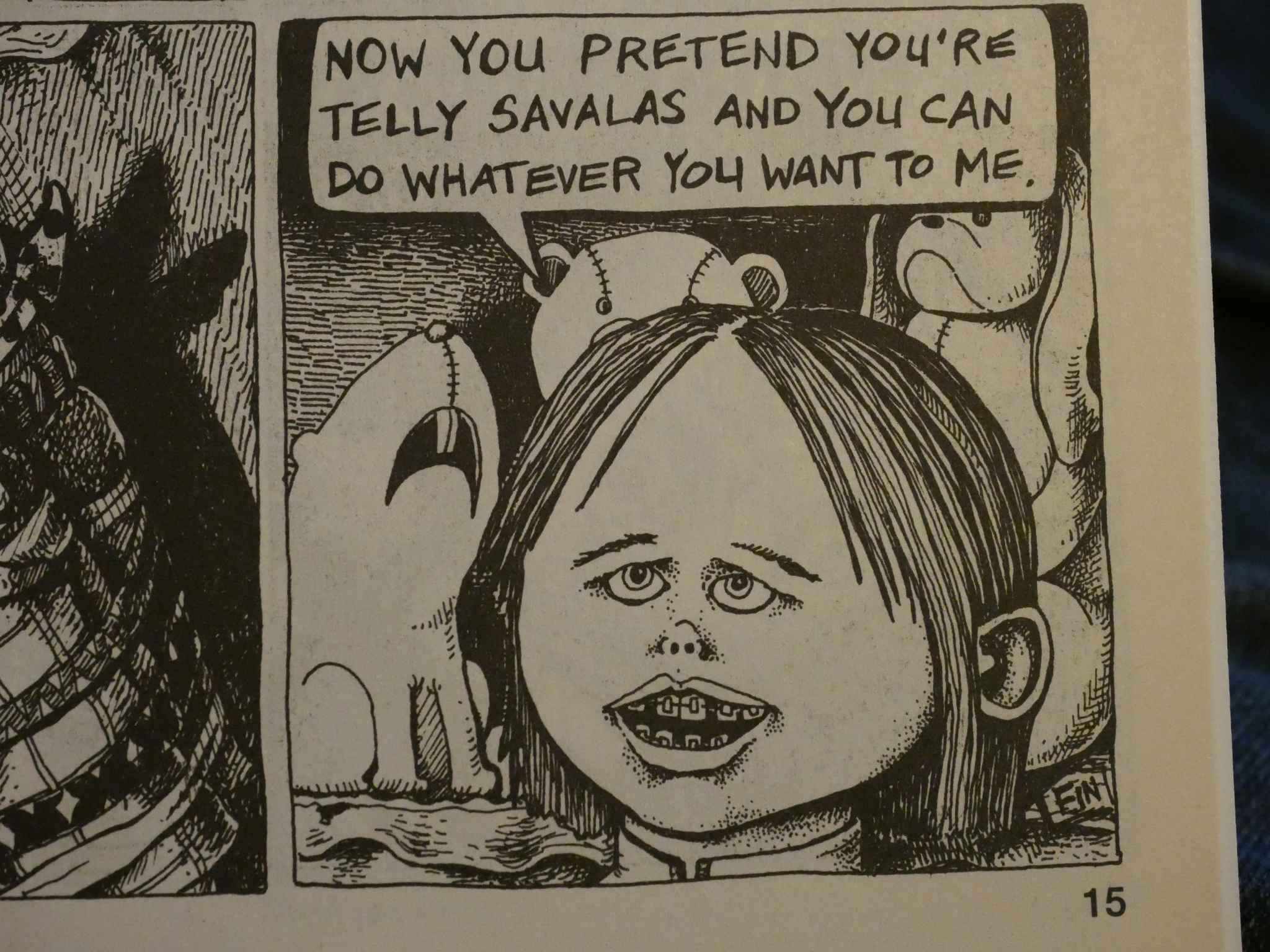 The mixture of children/sex/horror/humour stuff in Grit Bath, though, is icky on a level that I’m not comfortable with now, at least. I don’t remember being this repulsed when I read her work back then, but, on the other hand, I bought the first two issues just now (and fortunately Borderlinx didn’t inspect the comics closely (although weirdly it took two months for DHL to get the comics to me, while the rest of the batch arrived in two days))… I found myself skimming the narration in the first story, because it just seemed to gruesome to my oh-so-sensitive sensibilities. 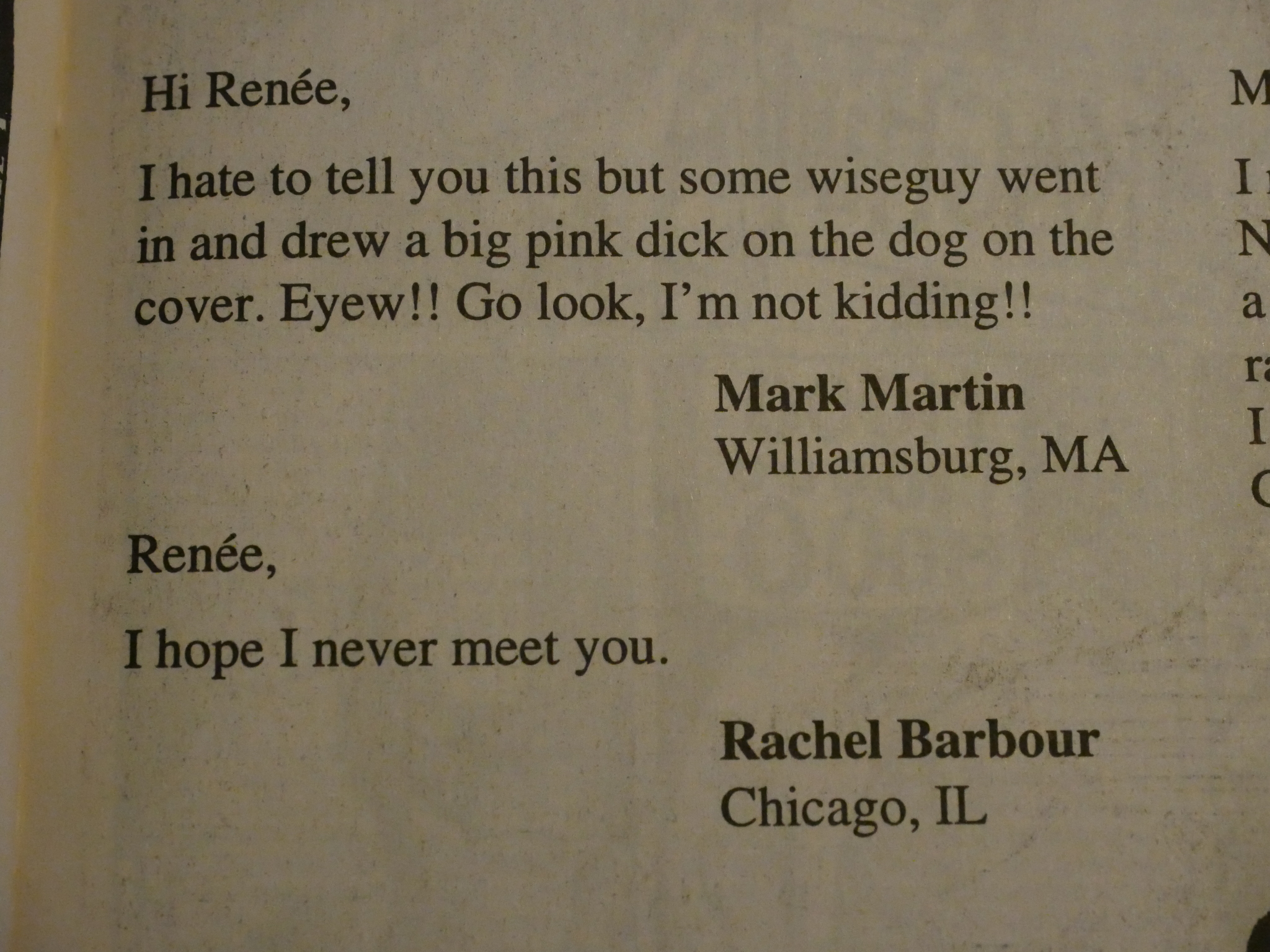 The readers react in issue two. 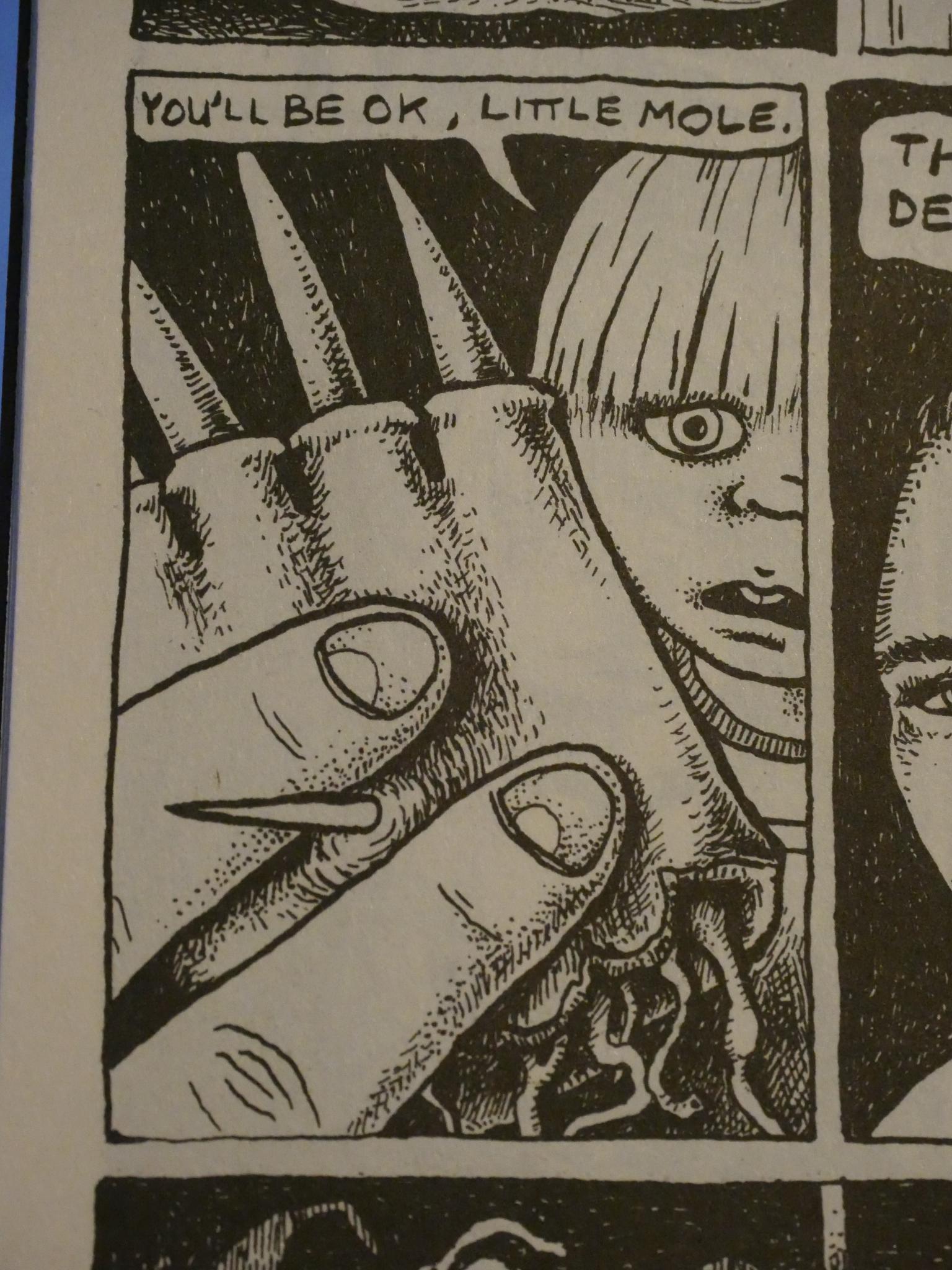 The third issue, which I did have back then, seems to pull way, way back from the extremity of the first two issues. Sure, it’s still gruesome, but it’s also kind of sweet, and is more like I remember French’ comics being. Reading these three issues now, it almost feels like the first two issues are a dare: How far can she take this approach to comics? 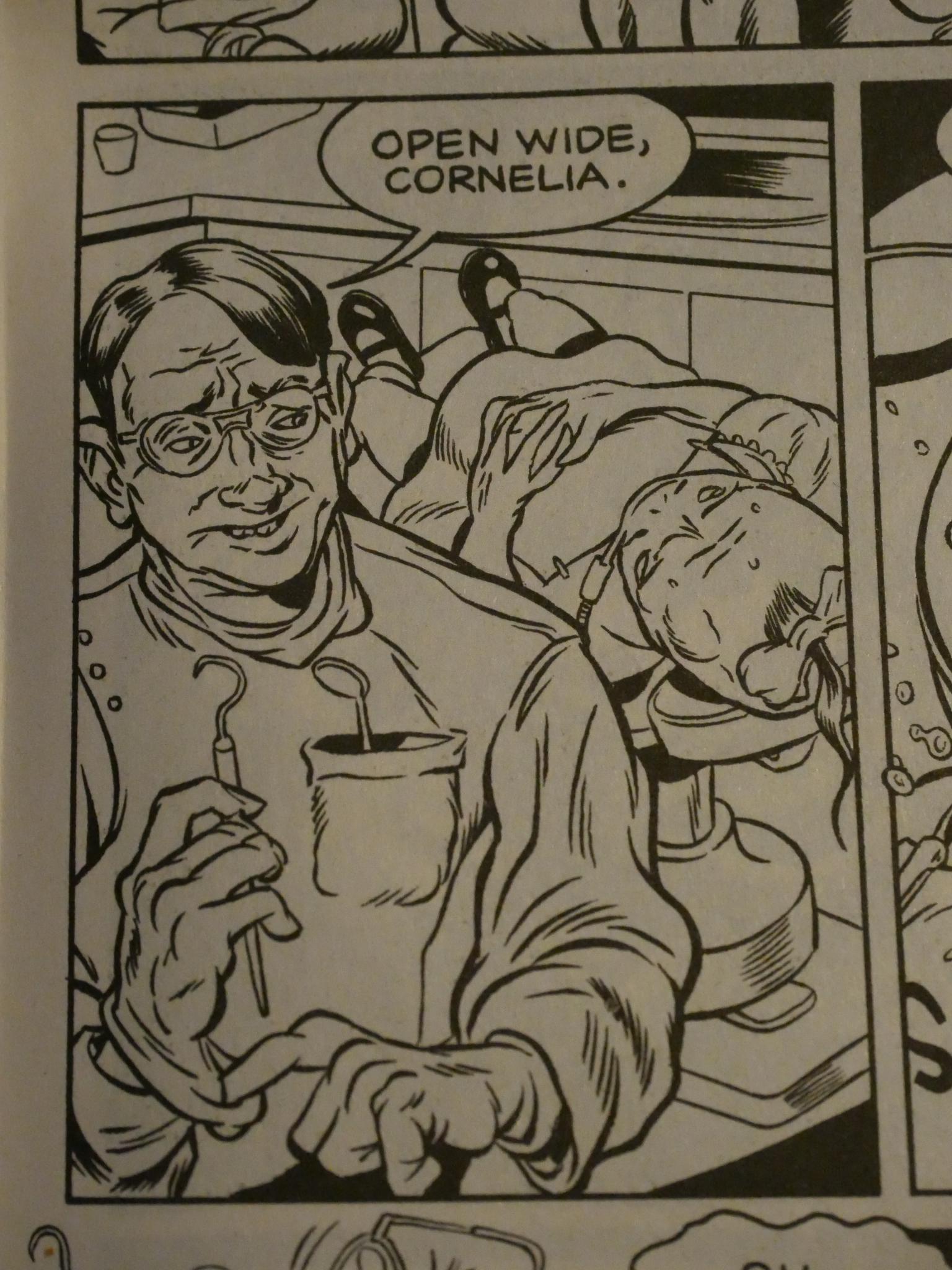 The third issue is much milder, and includes some other artists, too. We see Gene Fama above with a pretty inconsequential gag. The third issue feels a bit like a grab bag of bits… 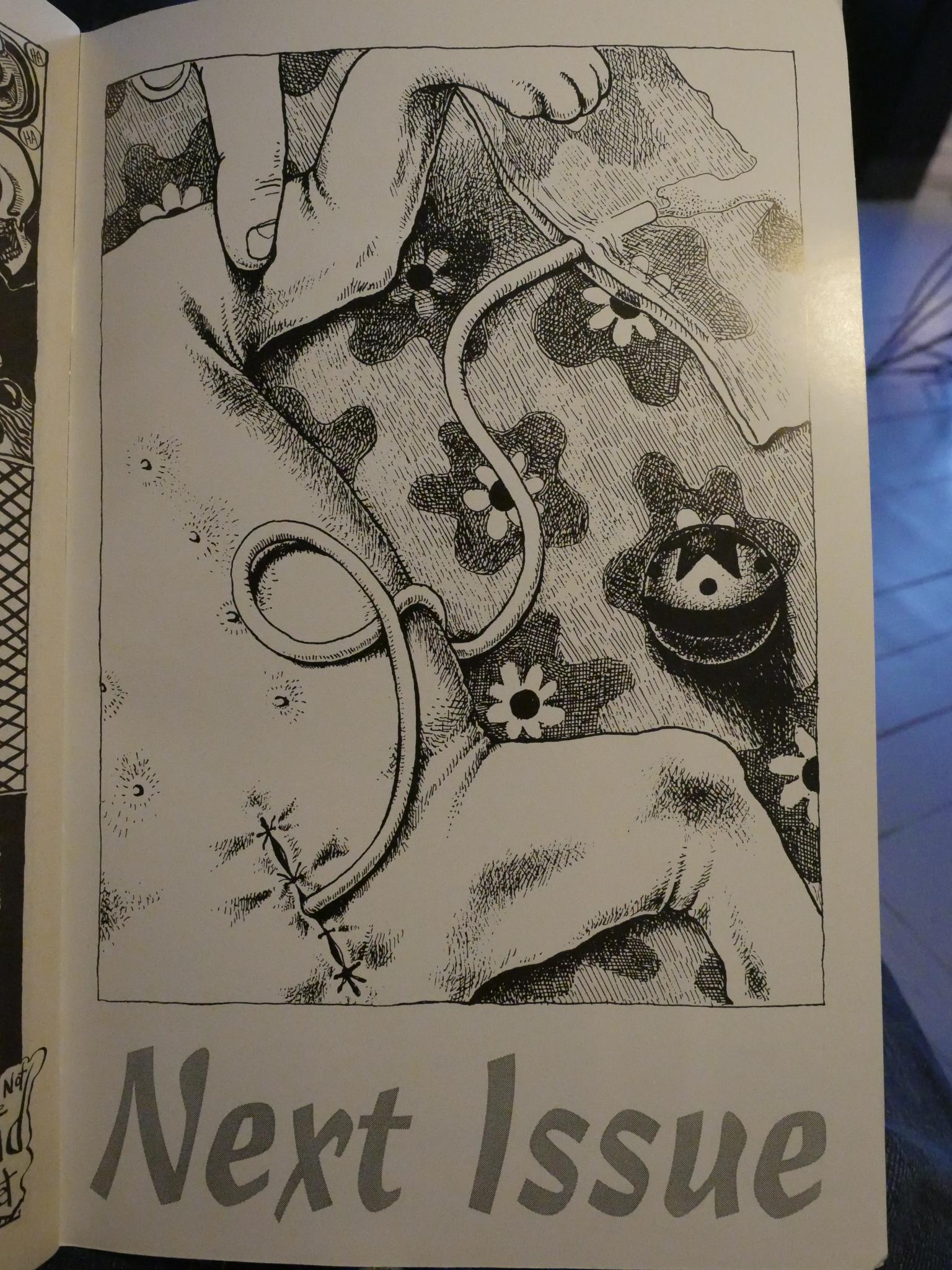 And then we end the issue with the classic Fantagraphics way of saying that the book is cancelled: By having the phrases “next issue” and “to be continued” scattered around.

French continues to publish comics, and the most recent one was Baby Bjornstrand, which I haven’t read. But I’ve ordered it now. She has shifted to a softer all-pencil art style now.