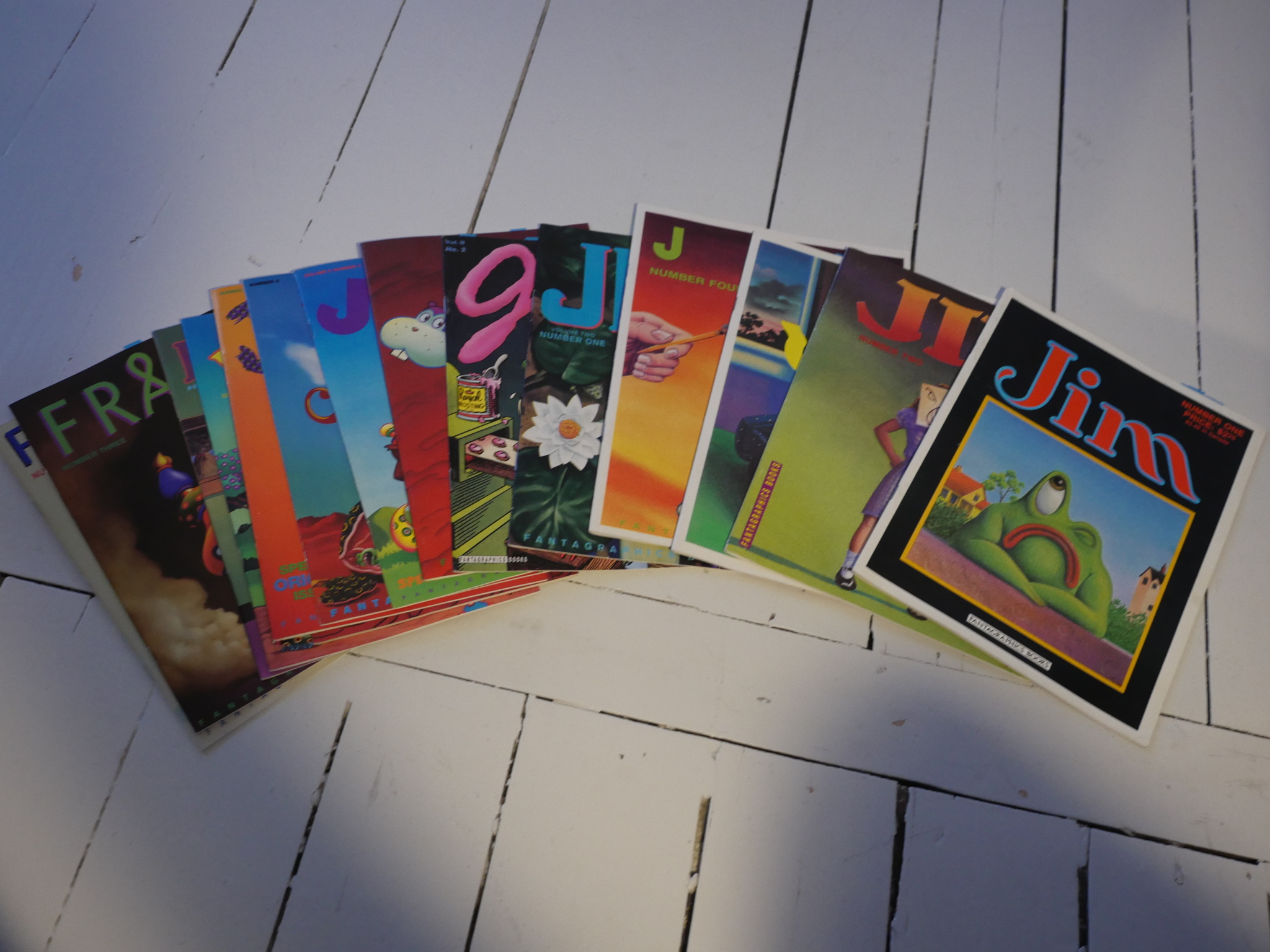 Jim (the series, not the author) started off as a collection of material that Jim (the author, not the series) had published in the 1982-86 period. The first four issues are magazine sized… and very strange. 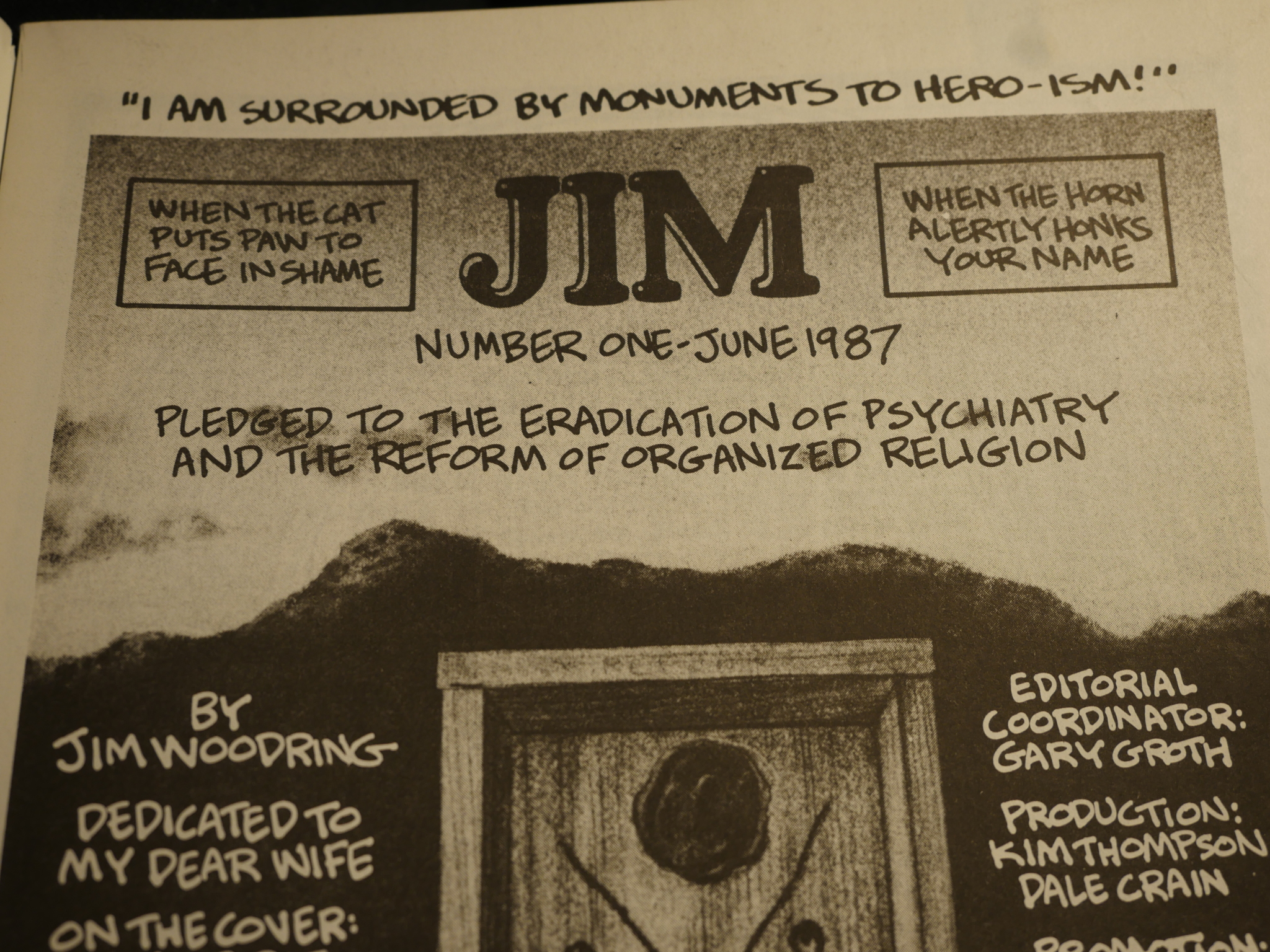 The dedication in the first issue is probably a joke, but it’s rather apt. 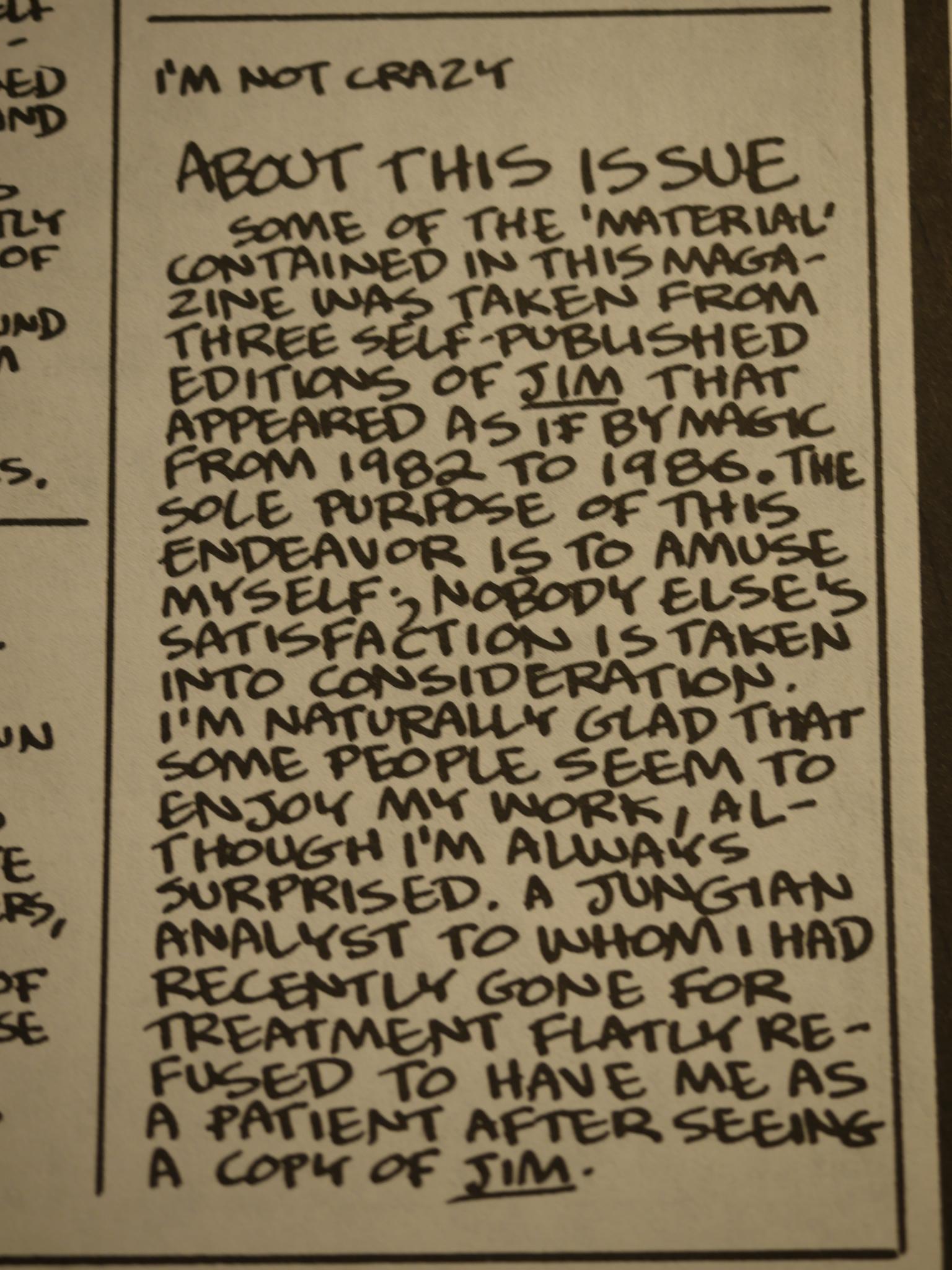 Har de har. Anyway, I was 17-ish when I read the first issue of Jim, and I clearly remember how exhilirating and inspiring it all was. You have these gorgeous, yet squicky pages: 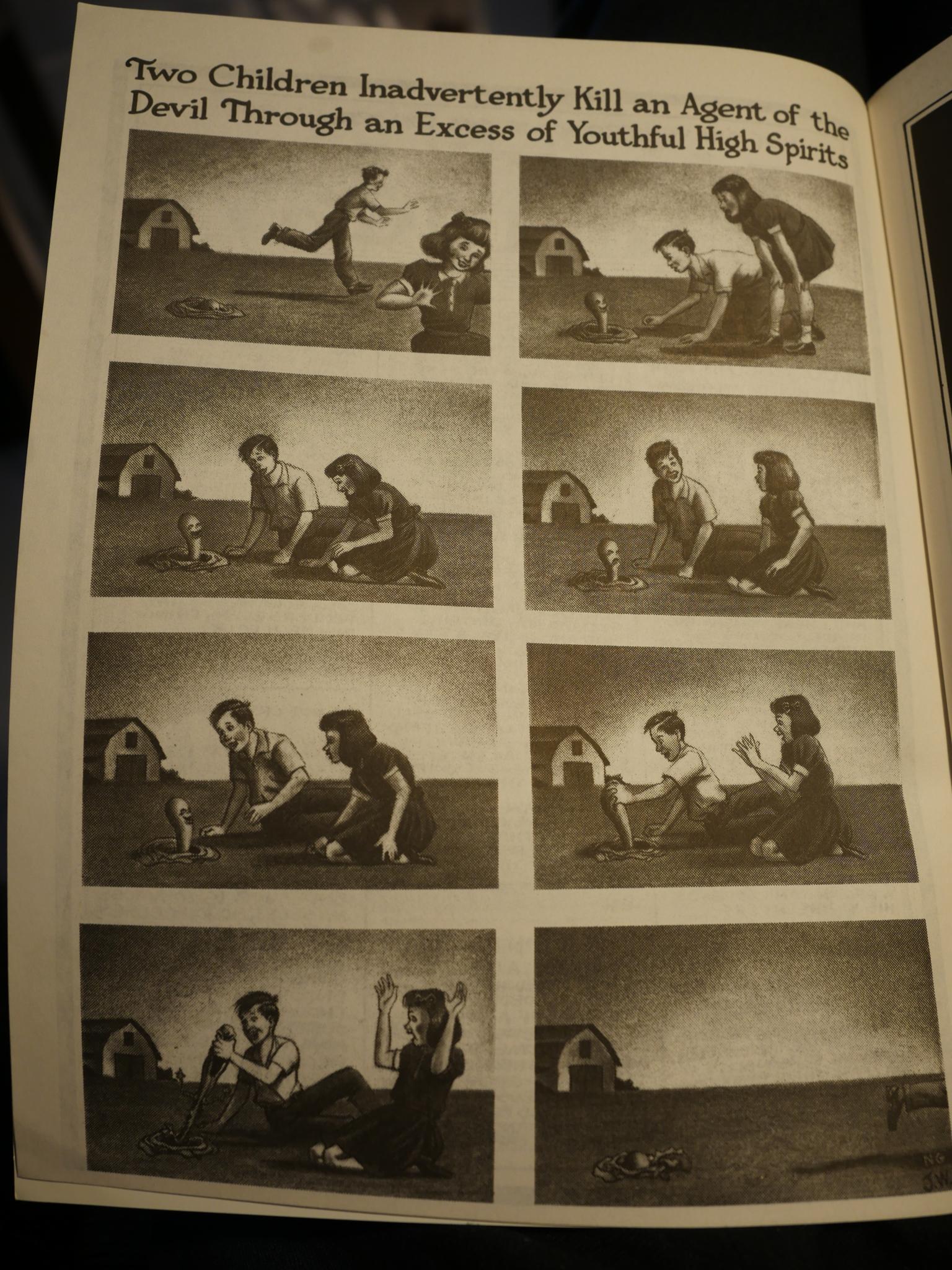 But the bulk of the first two issues are pages and pages of stuff like this: 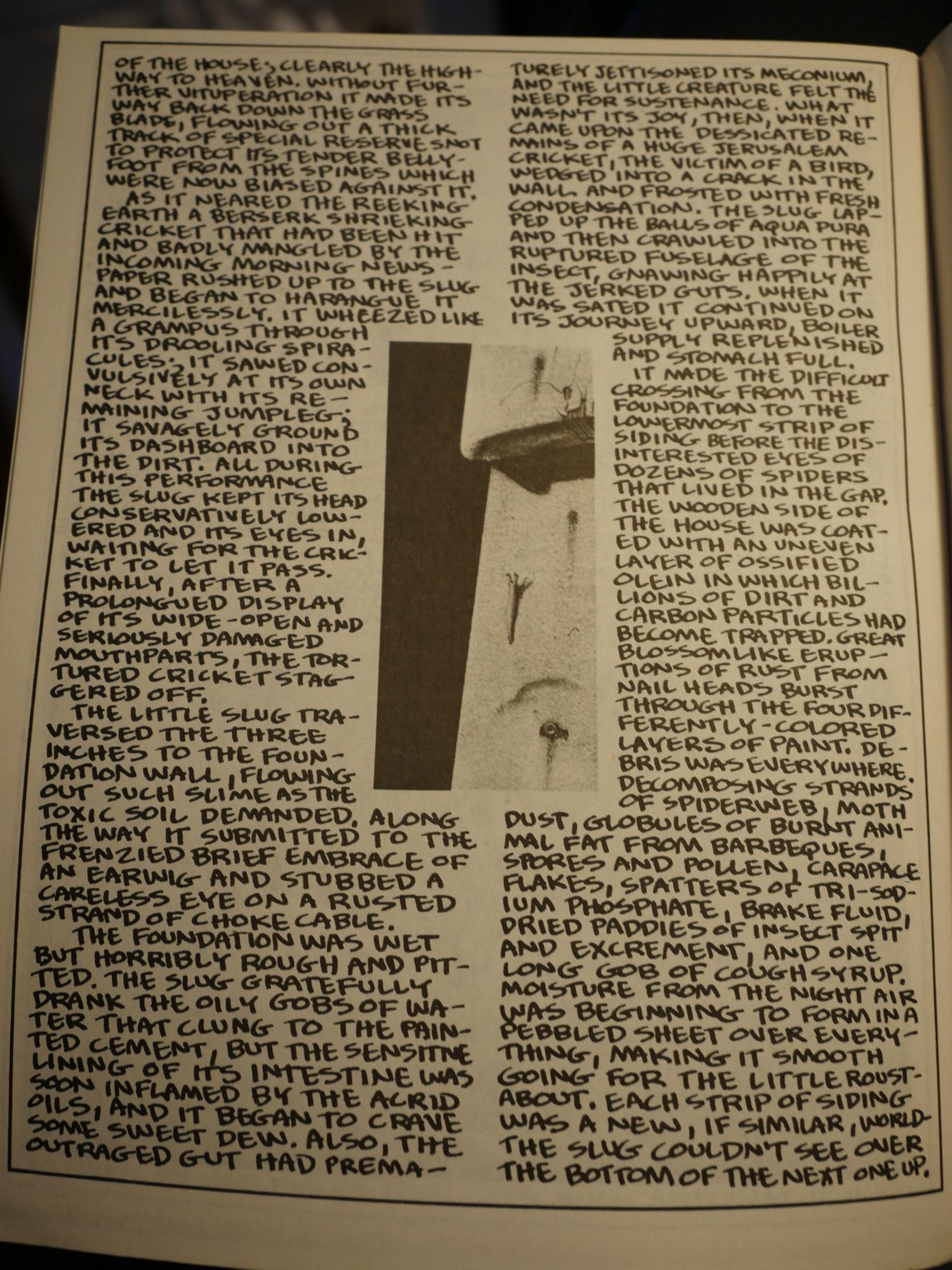 Stories that seem to be written semi-automatically with little regard for consistency, but funny and disturbing at the same time. I remember doing some writing in the same style at the time (fortunately all gone now), and here this stuff was being published in a real magazine. 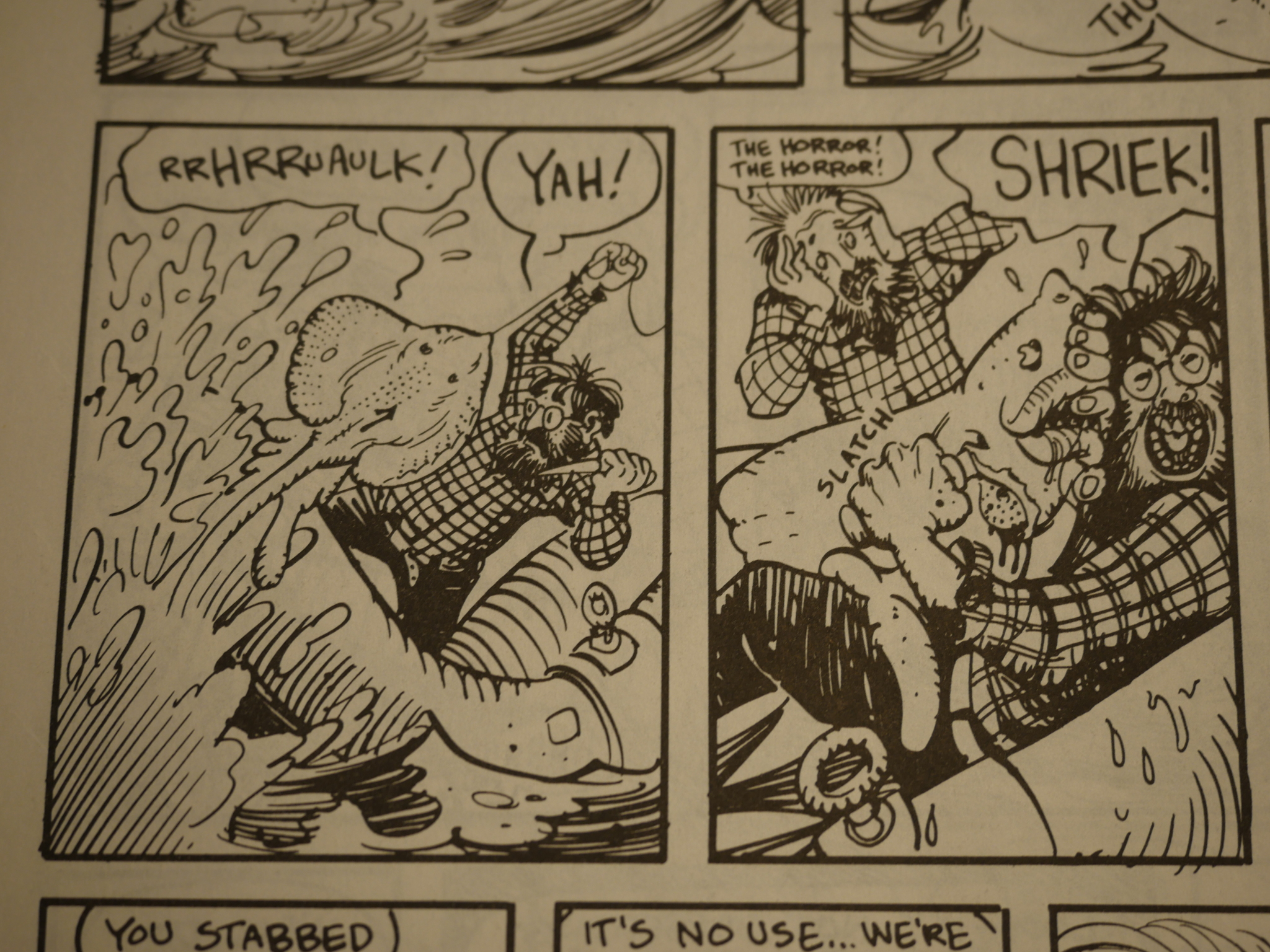 There are also some more traditional-looking comics pages here, and they are more overtly dream based than the text pages. 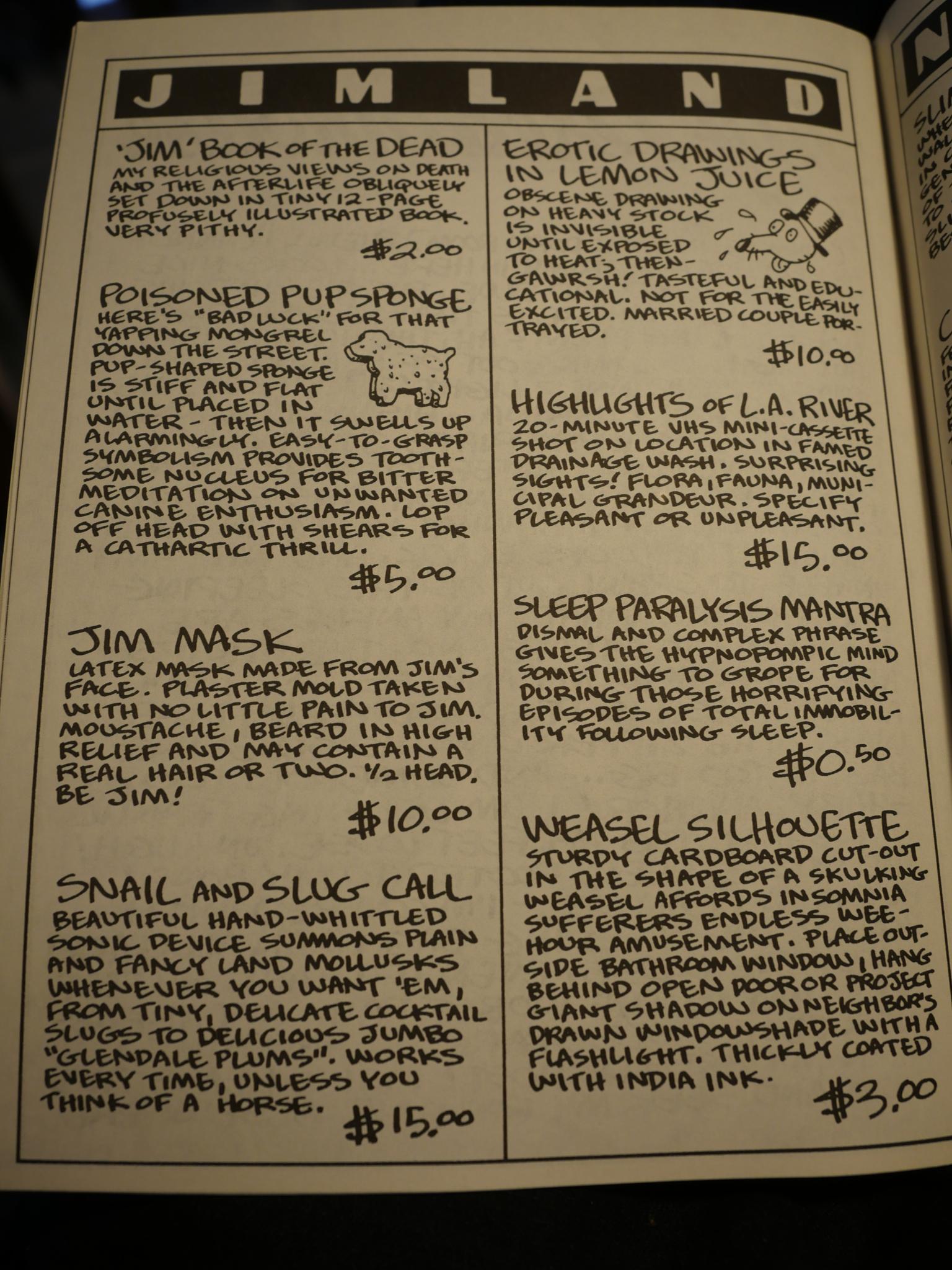 And here’s the first of the Jimland Novelties. I assumed at the time that it was all a joke, but reading these pages now, I can see how all these could perhaps be real items. And in later letters pages, Woodring claims that they took a long time to produce when somebody ordered them, so perhaps they were? 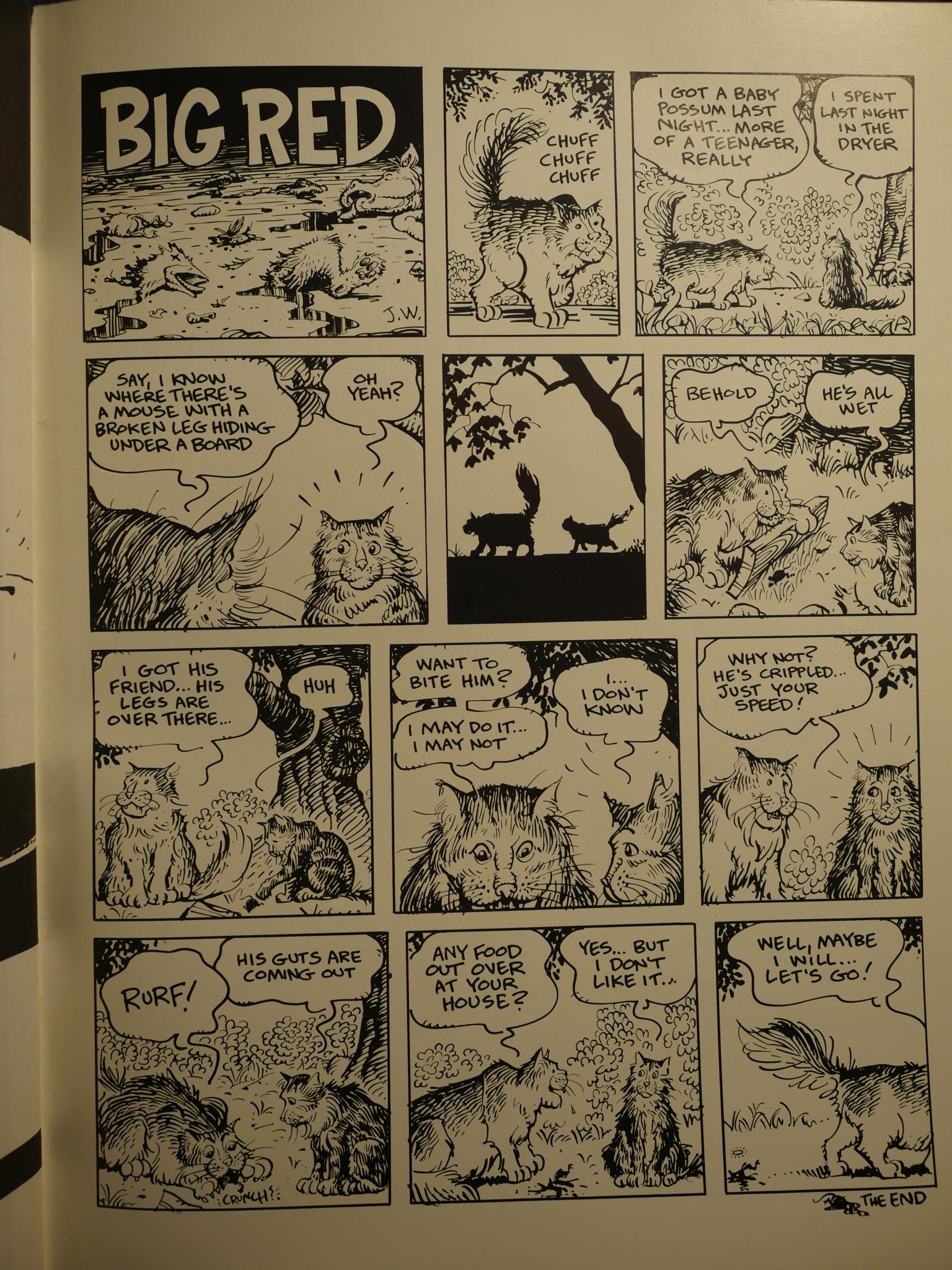 The Big Red stories appear occasionally throughout the Jim issues, and are probably the most realistic anthropomorphic cats in comics.

The first two issues were published a few months apart, and then there was a one year pause before the third issue, and then almost a two year hiatus before the fourth and final issue. 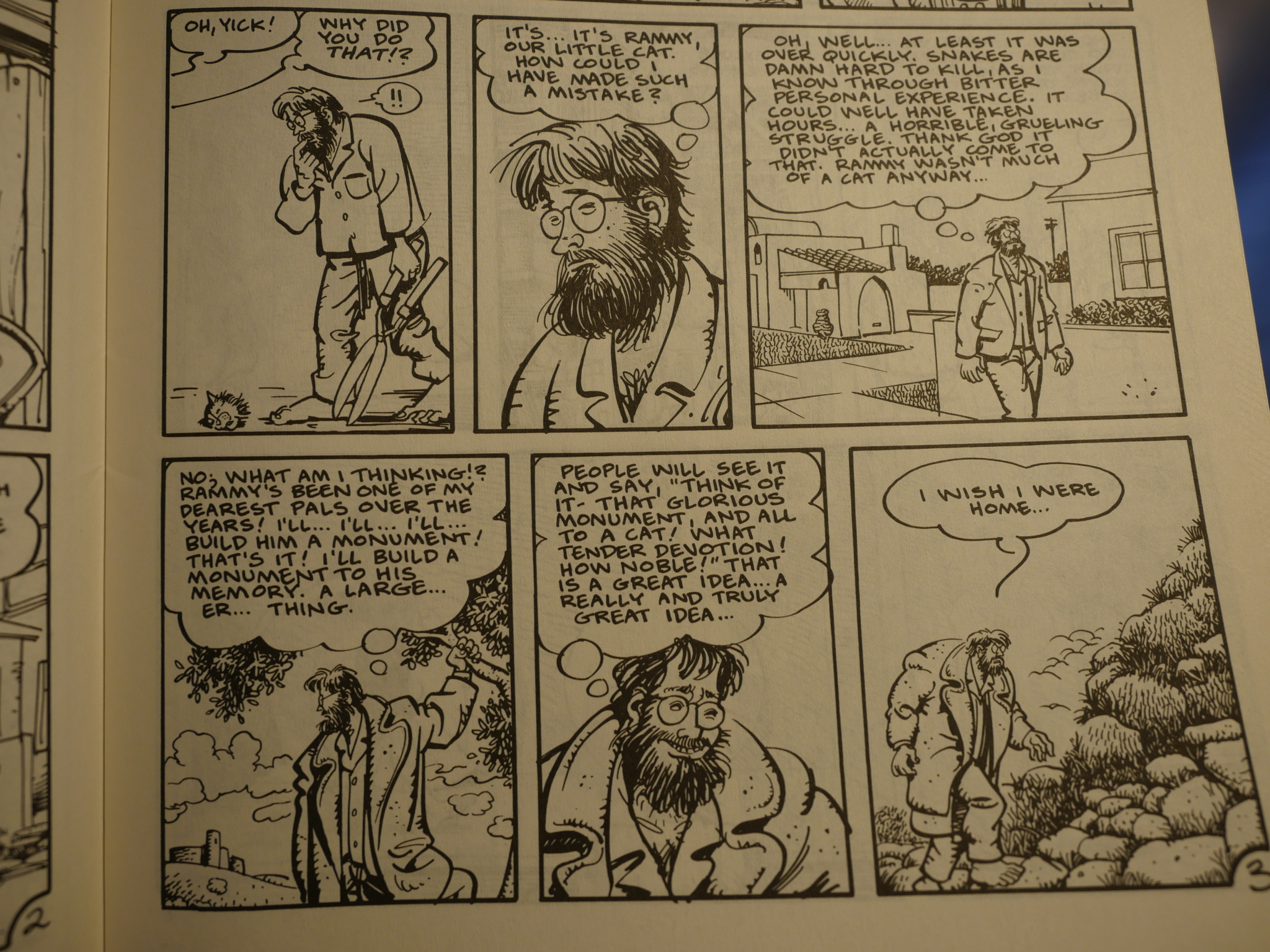 The two final issues also drastically reduced the number of text pages: A couple in the third, and none in the fourth. Instead almost all the stories are now in this style, and deal almost exclusively with retelling dreams. At least that’s what I assume they are, because the way Jim’s (the character, not the magazine) thoughts shift emotionally between the third and the fourth panel is just like being inside one of my dreams. 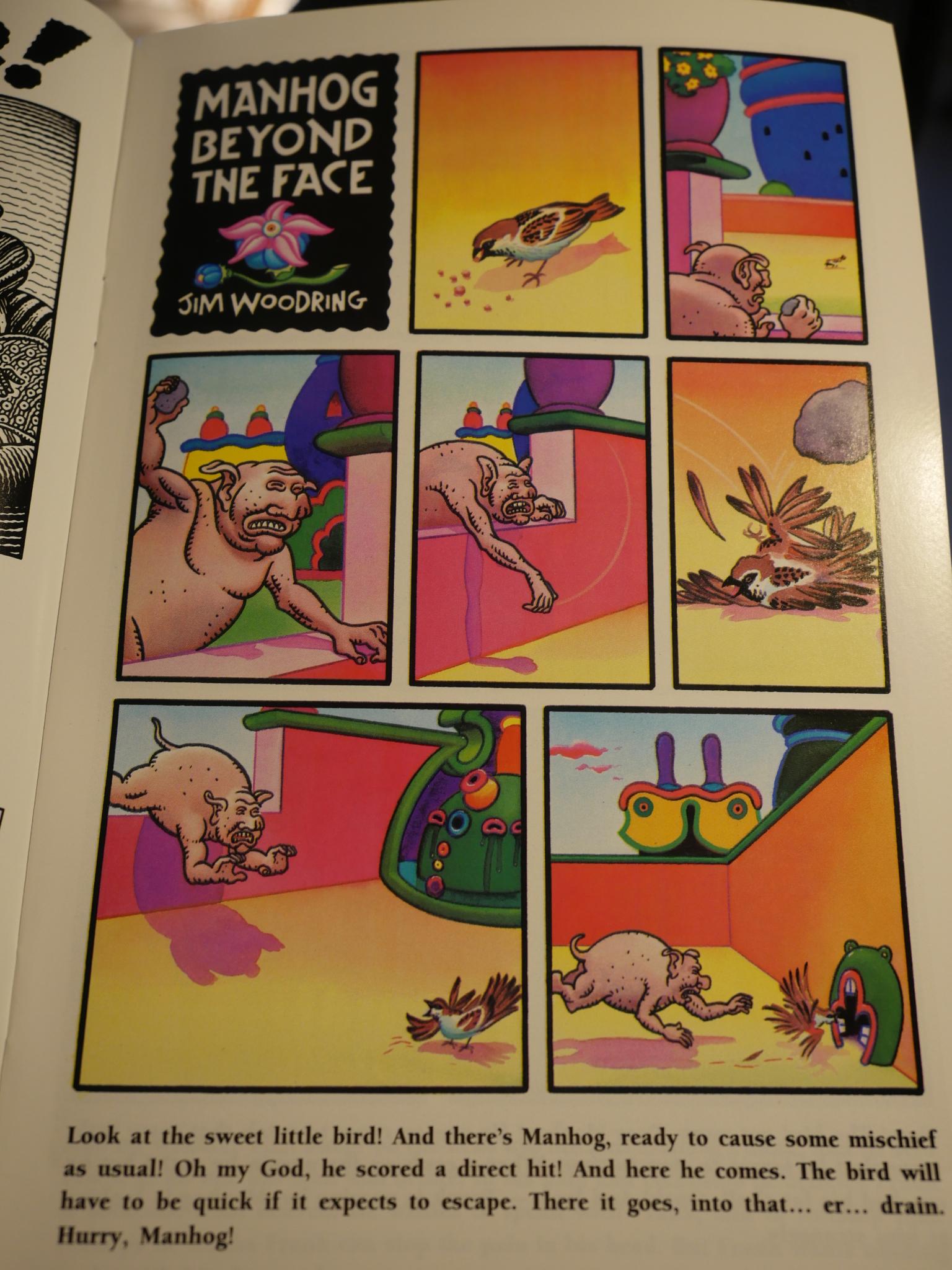 There’s a three year pause between the final issue of the magazine-sized first Jim series and the standard comic book sized second Jim series. During that time, he’d published the acclaimed Frank in the River story and the Tantalizing Tales series (co-created with Mark Martin) at Tundra. But then he’s back at Fantagraphics for another go with Jim Volume 2. 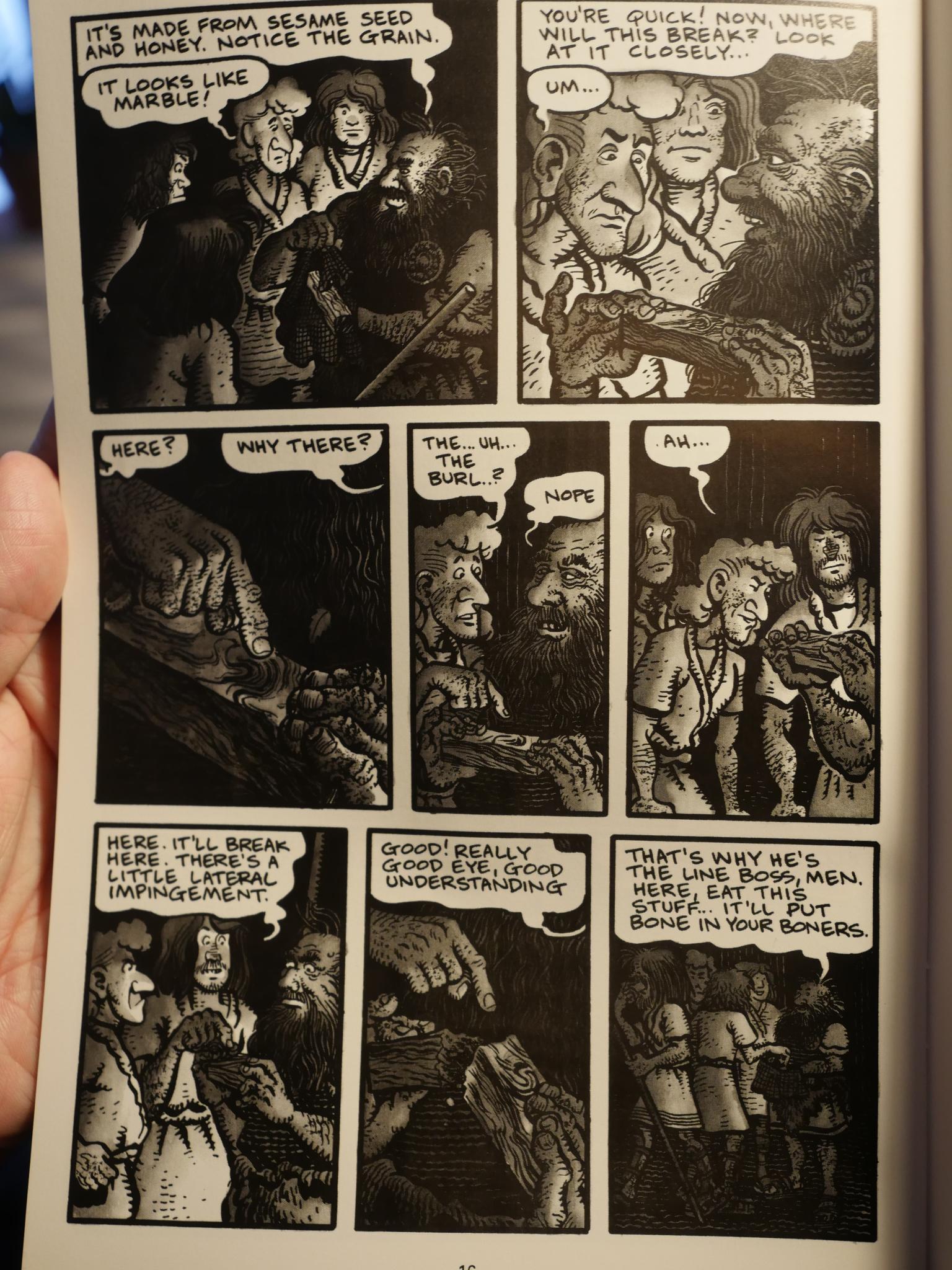 All issues are on shiny paper and is a mixture of black and white and colour work. Above we see another dream sequence. I can relate. 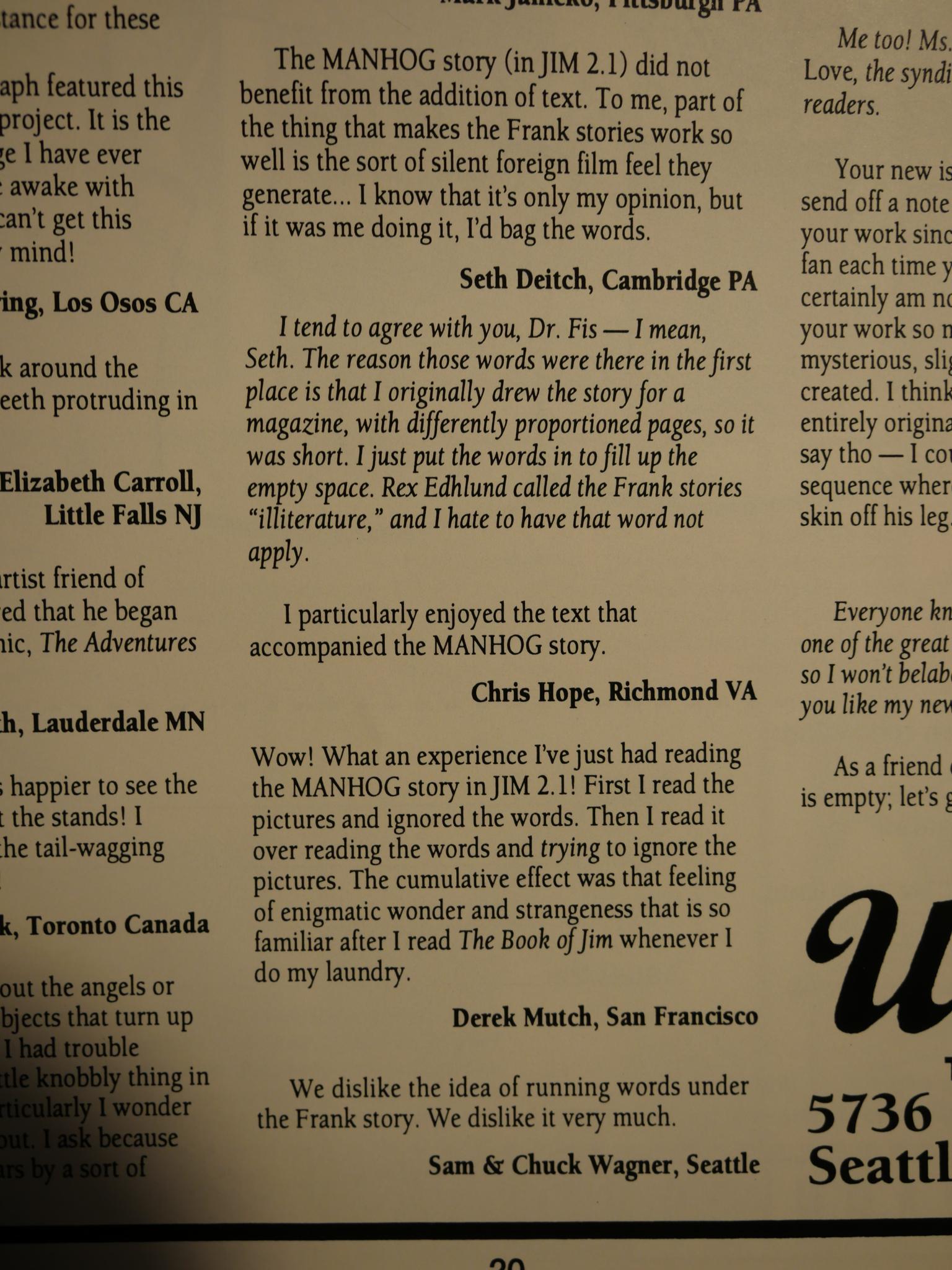 Running text under the horrifying, horrifying manhog story above was apparently the major controversy of the day. 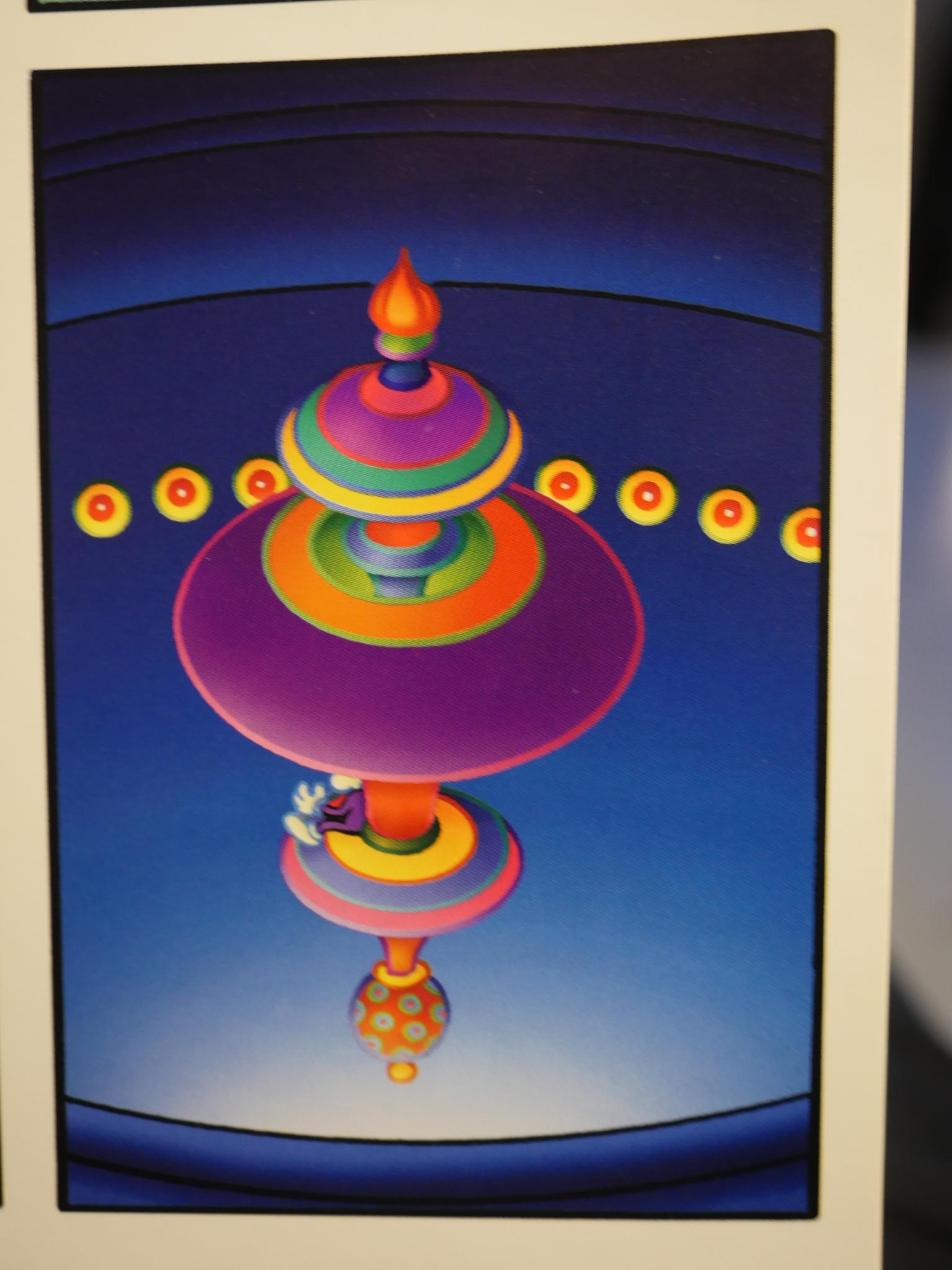 For the third issue, Mark Landman did what I assume to be computer 3D modelling of the Frank story… or perhaps just very computer-assisted colouring. It’s pleasantly weird. 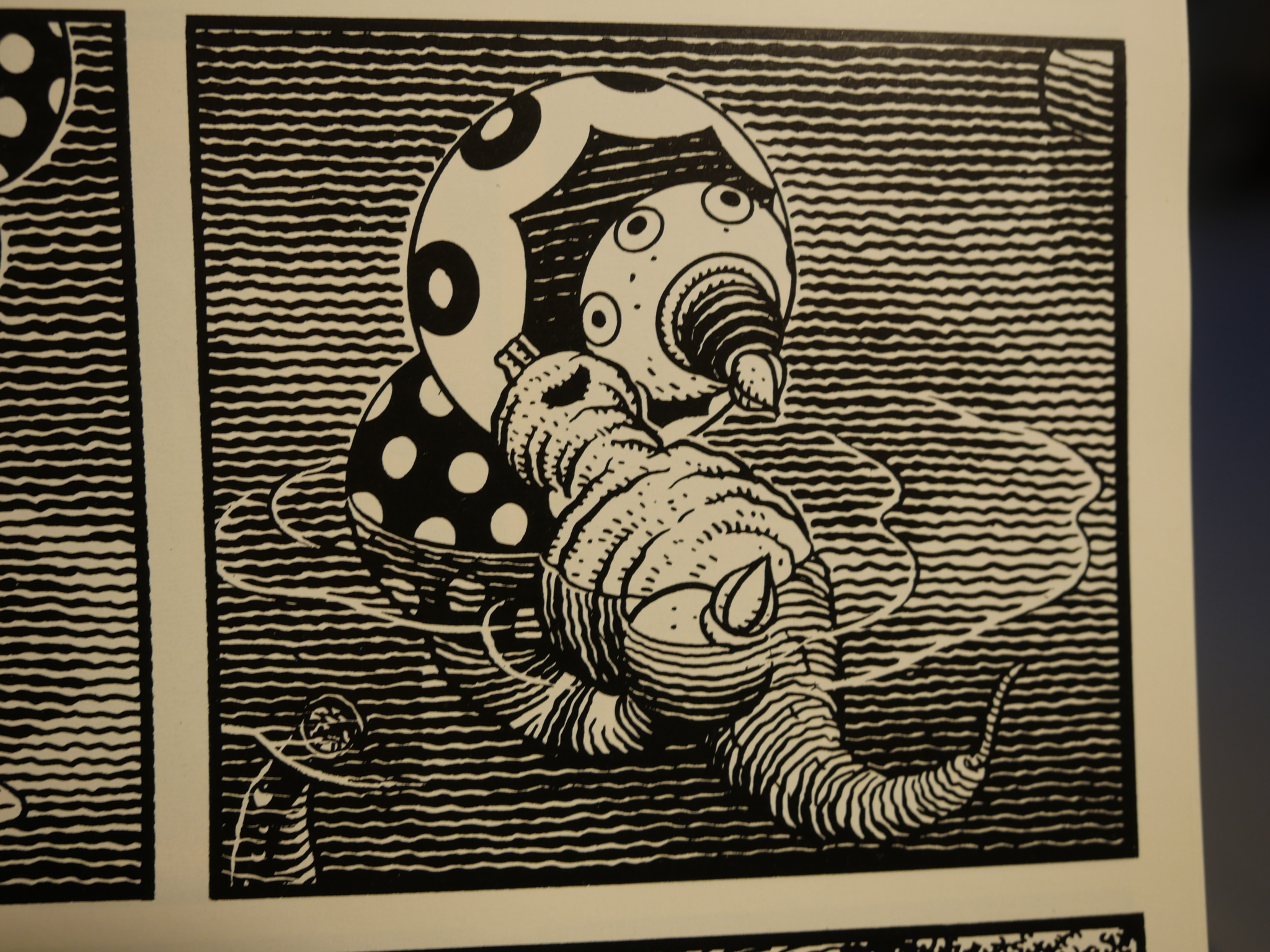 Woodring had used variations of this shading technique for a while, but I think this story in the fourth issue is the first instance where it looks just the way it’s going to look from now on: Stark and almost inhuman. It gets more and more regular as time goes on, and you can still see that it’s drawn by a hand here, but it’s getting there. 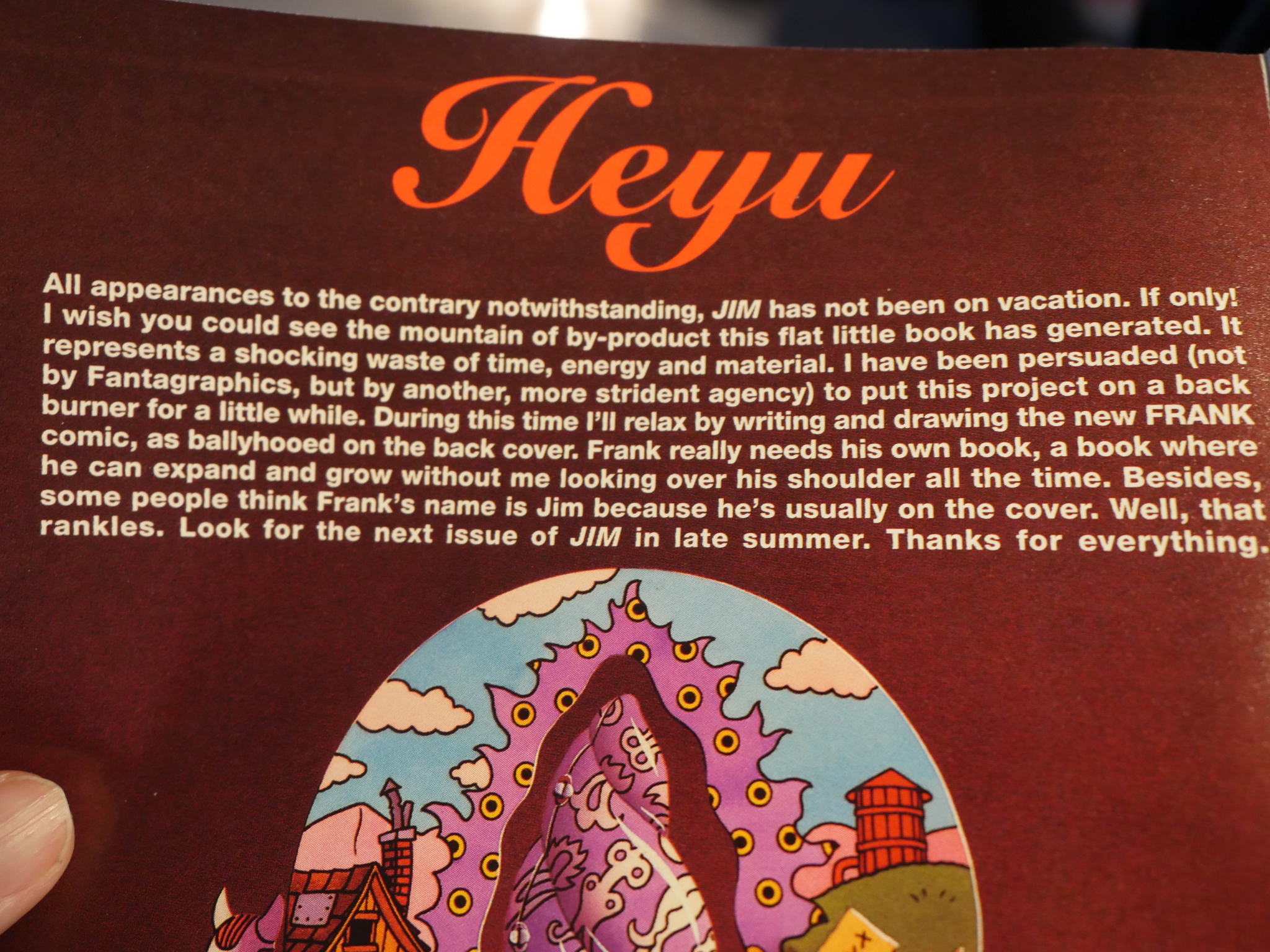 In the sixth issue Woodring announces that Jim (the series, not the character) is being put on the back burner. No subsequent issues were released, but the aforementioned Frank series did a few months later.

I don’t know what he’s been persuaded to do, or by whom. Looking at his bibliography, there doesn’t seem to be any major work from this era? I may just be blanking here, and this work was published later, but I can’t find much (other than the Frank issues discussed below), until the Frank book The Lute String in 2005 and the amazing Weathercraft in 2010.

I must be missing something. 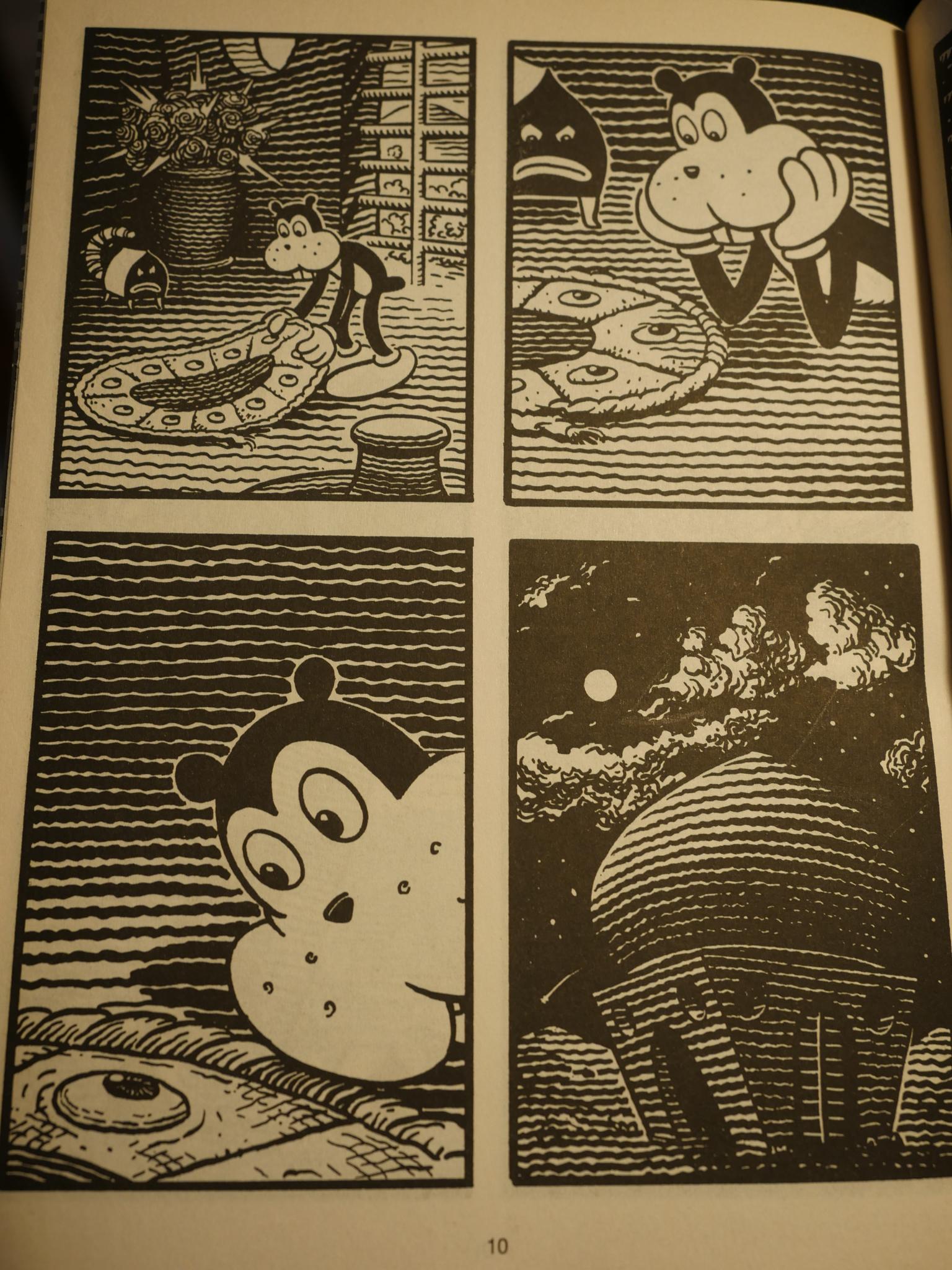 Anyway, the next thing to be published is Jim Special #1: Frank’s Real Pa. It was originally published in the Whole Earth Catalog, one panel per page. It was reformatted some before being collected to make the panels fit better. 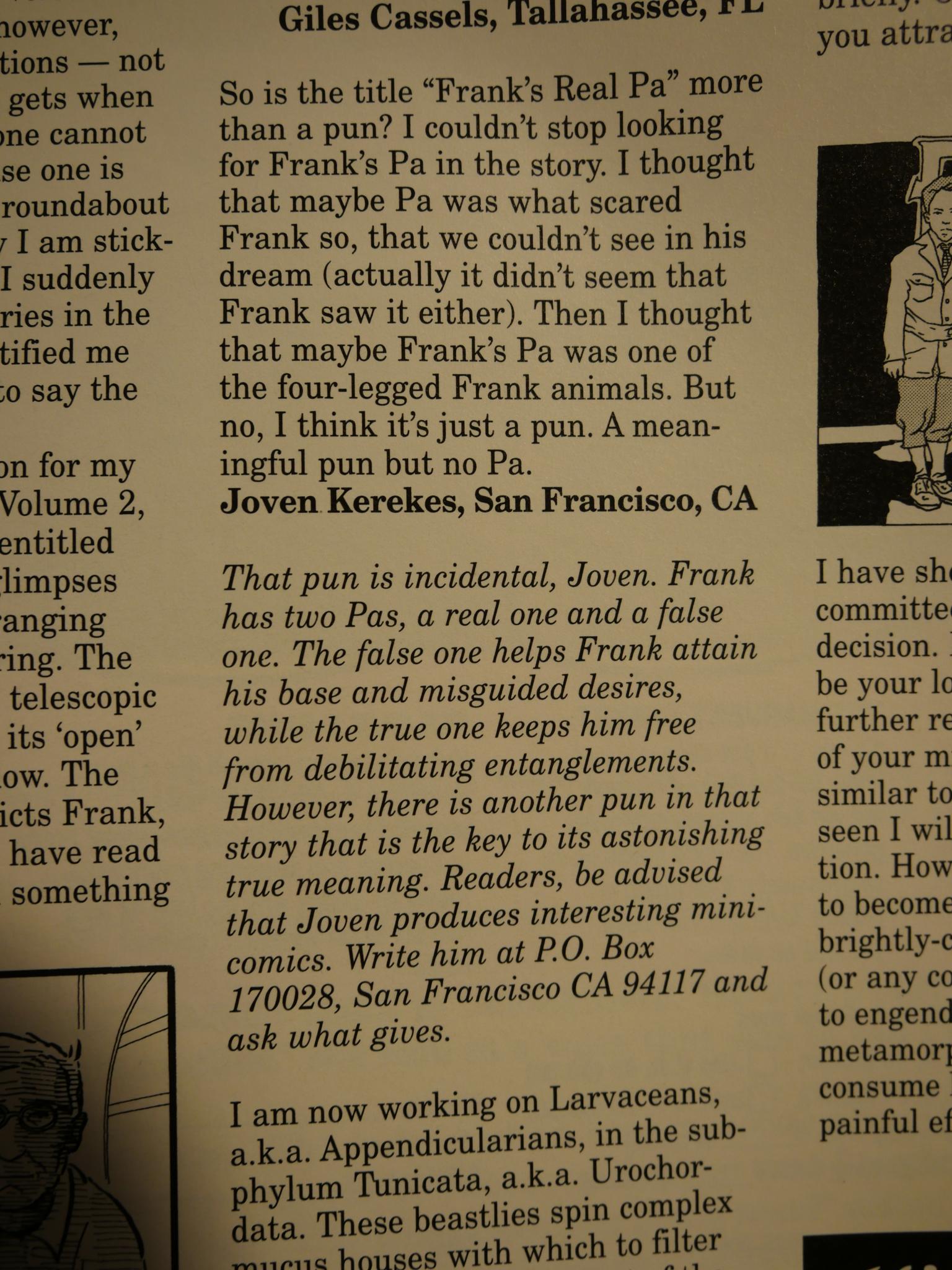 I didn’t realise that “Frank’s Real Pa” would work as a pun until I thought about it real hard, and then it was “d’oh”. But apparently the pun wasn’t intended (no pun intended), but instead refers to this: 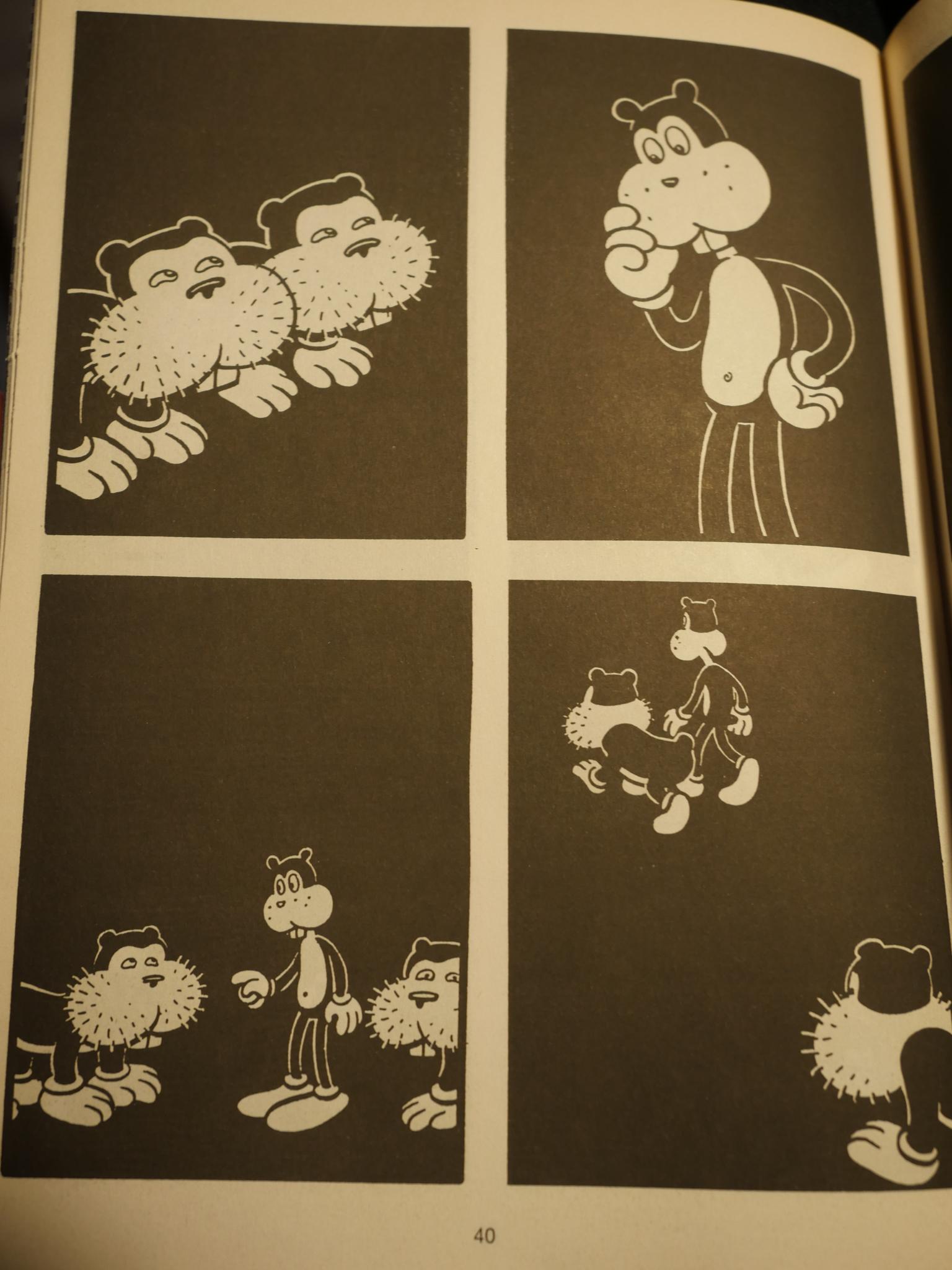 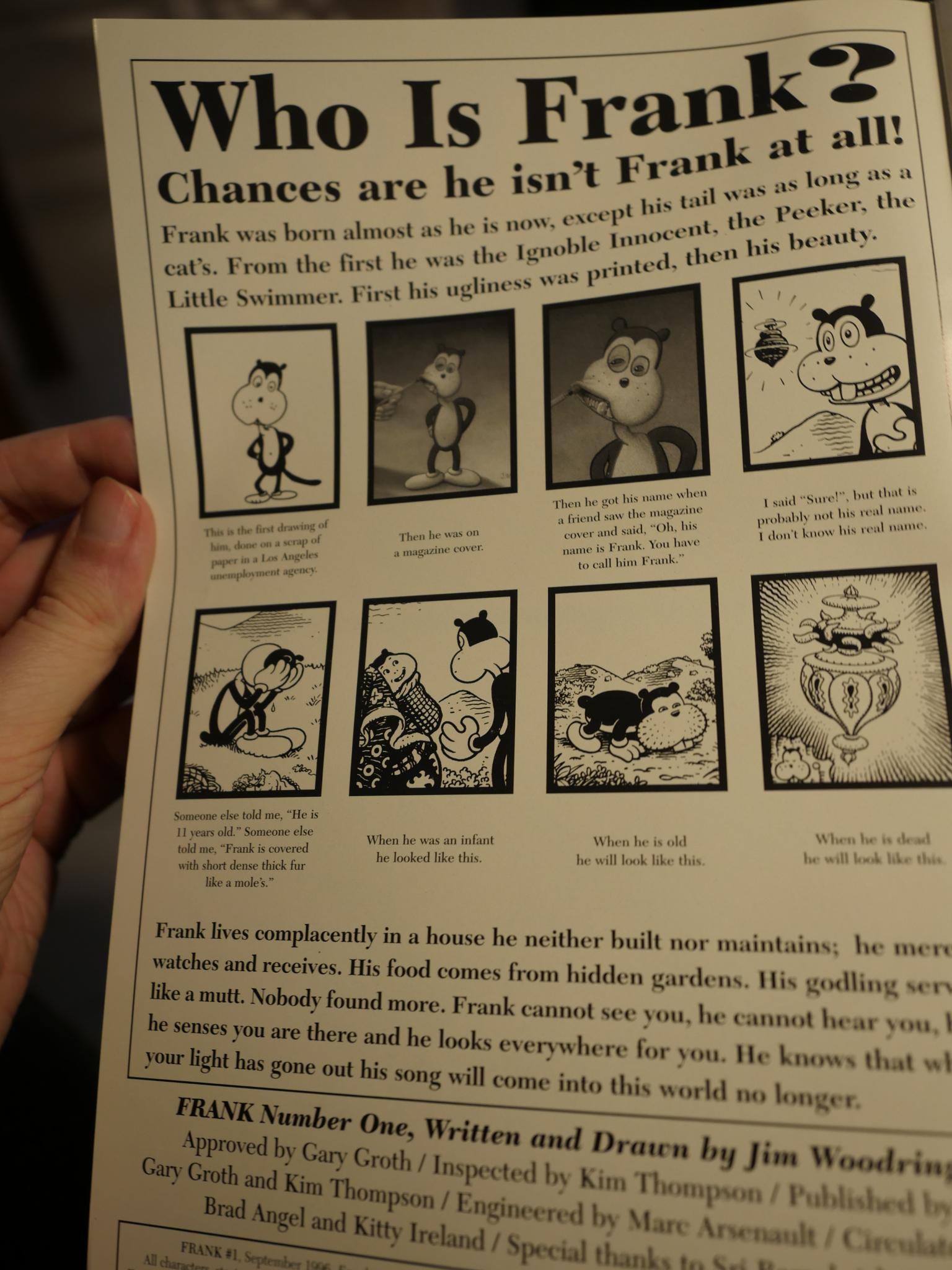 Yes! Because that’s just how Frank’s going to look when he gets old, and we all resemble our parents.

Anyway anyway, the Frank series lasted for four issues, and had pretty much the same format as the Jim II series. Only very Frank now. 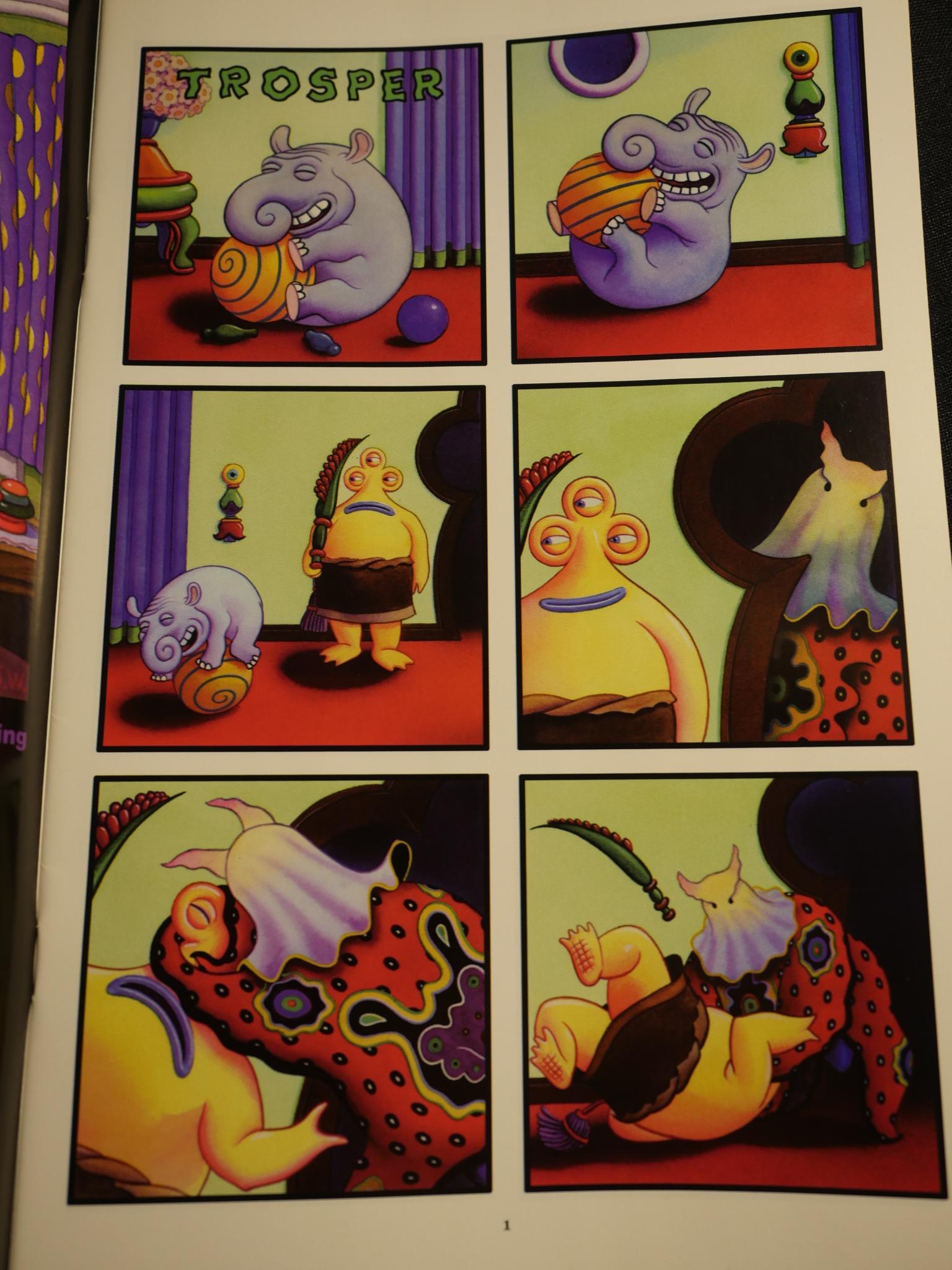 This comic was later reprinted in a book that accompanied a Bill Frisell CD. Or the other way around. I saw Frisell in concert a few years back (well, I’ve seen him dozens of times) where he accompanied a number of silent films. At least one of them were animated Frank cartoons. Very nice, I seem to recall, and the place was absolutely packed. 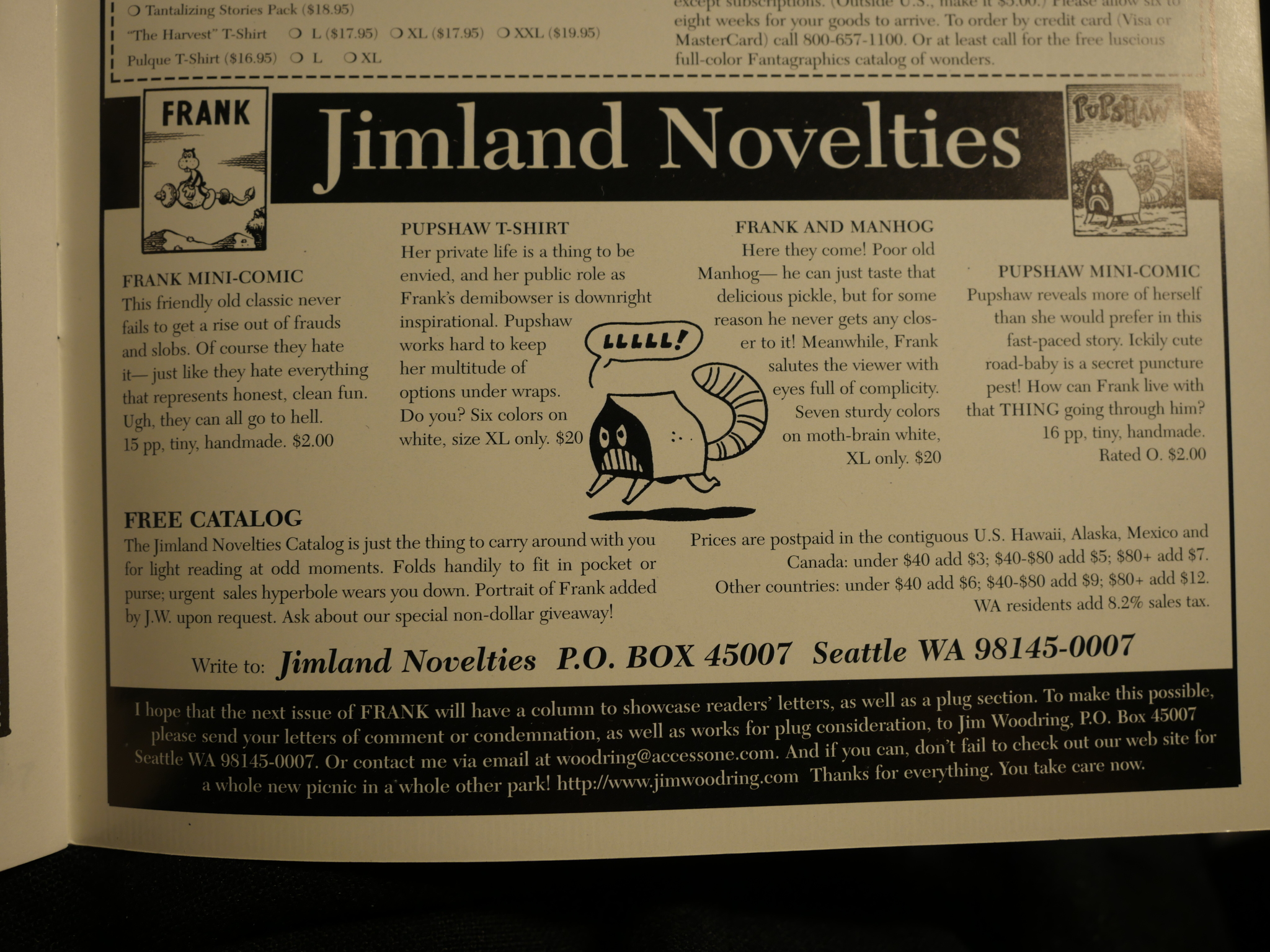 By the end of the Frank run, the “novelty” section had grown less… novel. Well, all good things apparently have to end for some reason or other…

The major feature of the last two issues of Frank was a serialisation of a new, long story called Frank’s High Horse. I can’t find anything on the web about it being finished or collected, which is a shame, because it was (well, duh) very good.

Jim Woodring is still publishing, and everything he does is still wonderful.