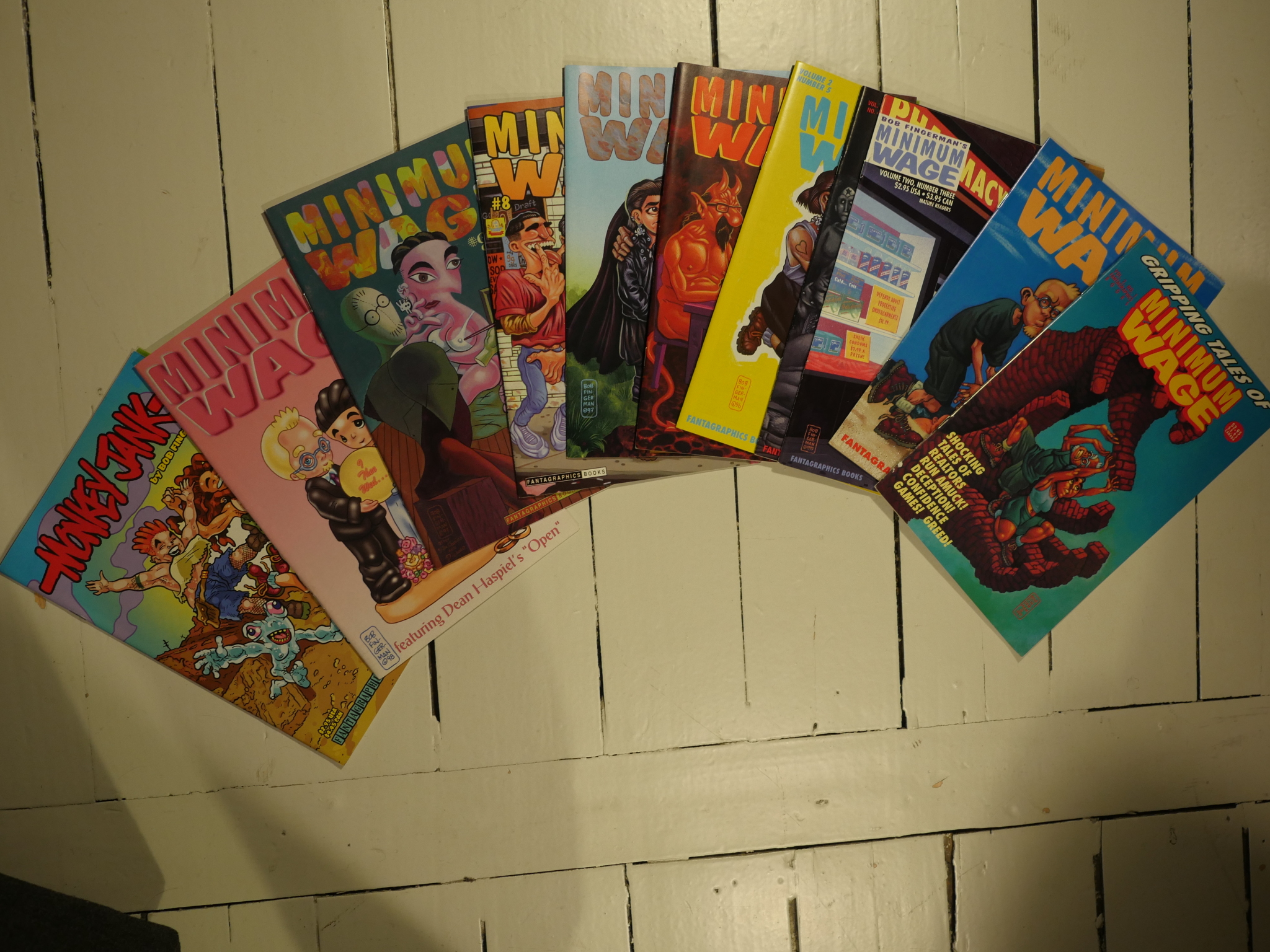 Fantagraphics had published an introductory Minimal Wage graphic novel before starting this series, which is perhaps an unusual publishing strategy. 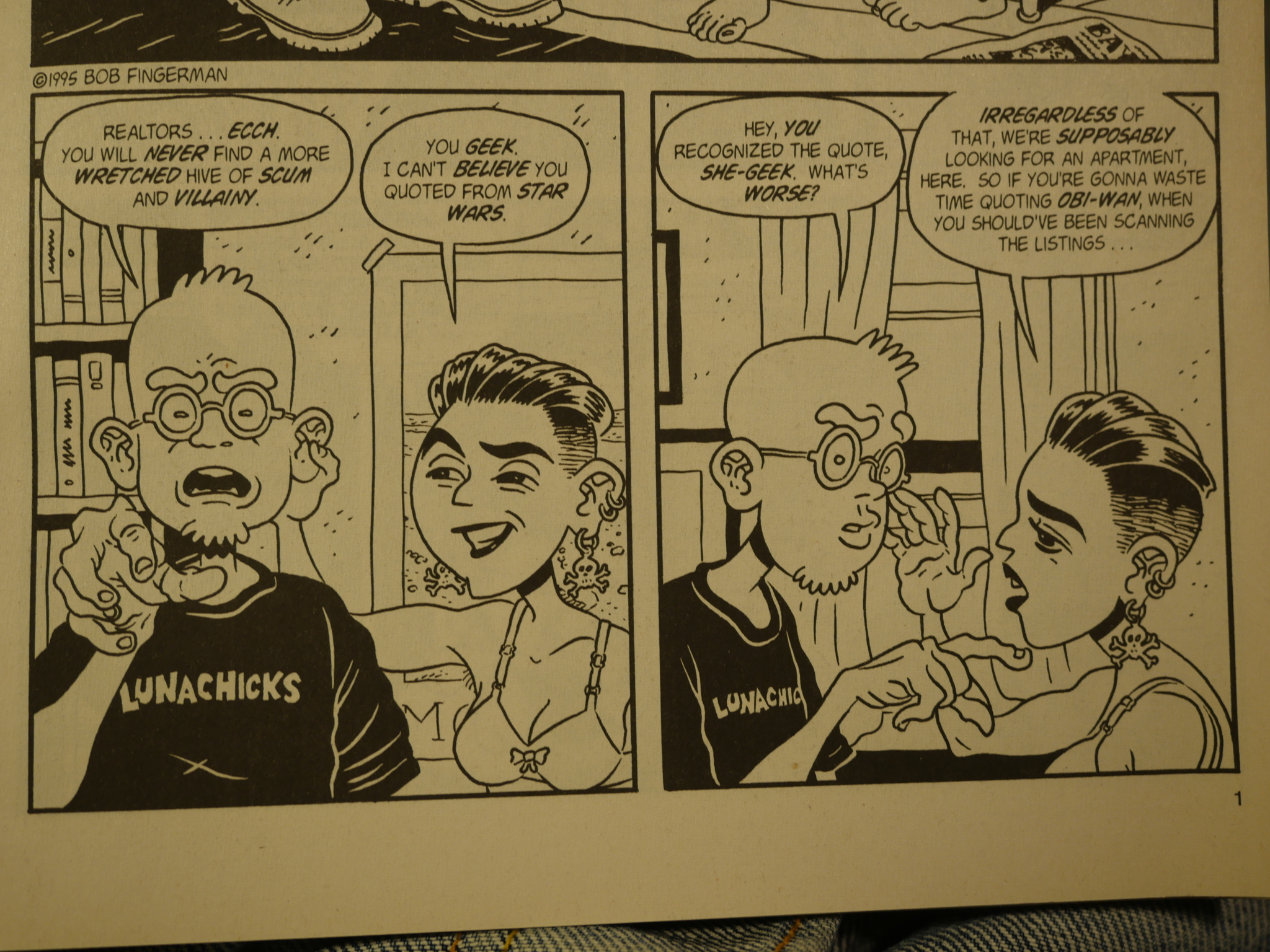 Minimum Wage is about a guy who’s a comic book artist, living in New York, struggling with the normal young people stuff. In tone, it’s very much like the HBO drama/comedies that started over a decade later (think Louis CK and all the rest of them): It’s endless kvetching about nothing, and nobody talks like actual human beings. (The “irregardless” stuff up there is a pet peeve of Fingerman’s.) 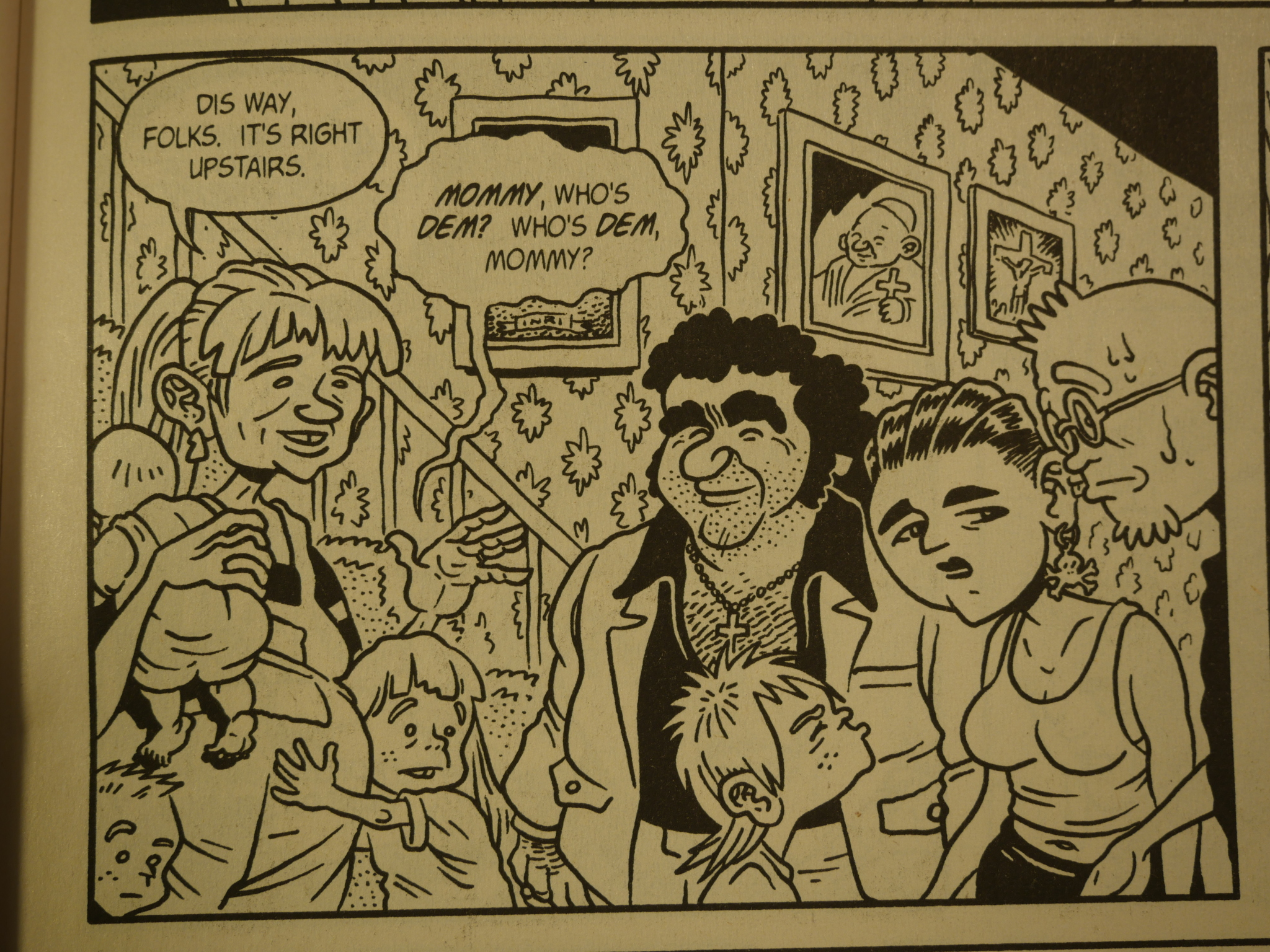 Fingerman has a line that doesn’t vary a lot in thickness, and in the beginning you get a quite a lot of these panels that seem to have a uniform level of greyness to them. My eyes sort of skid around a lot. 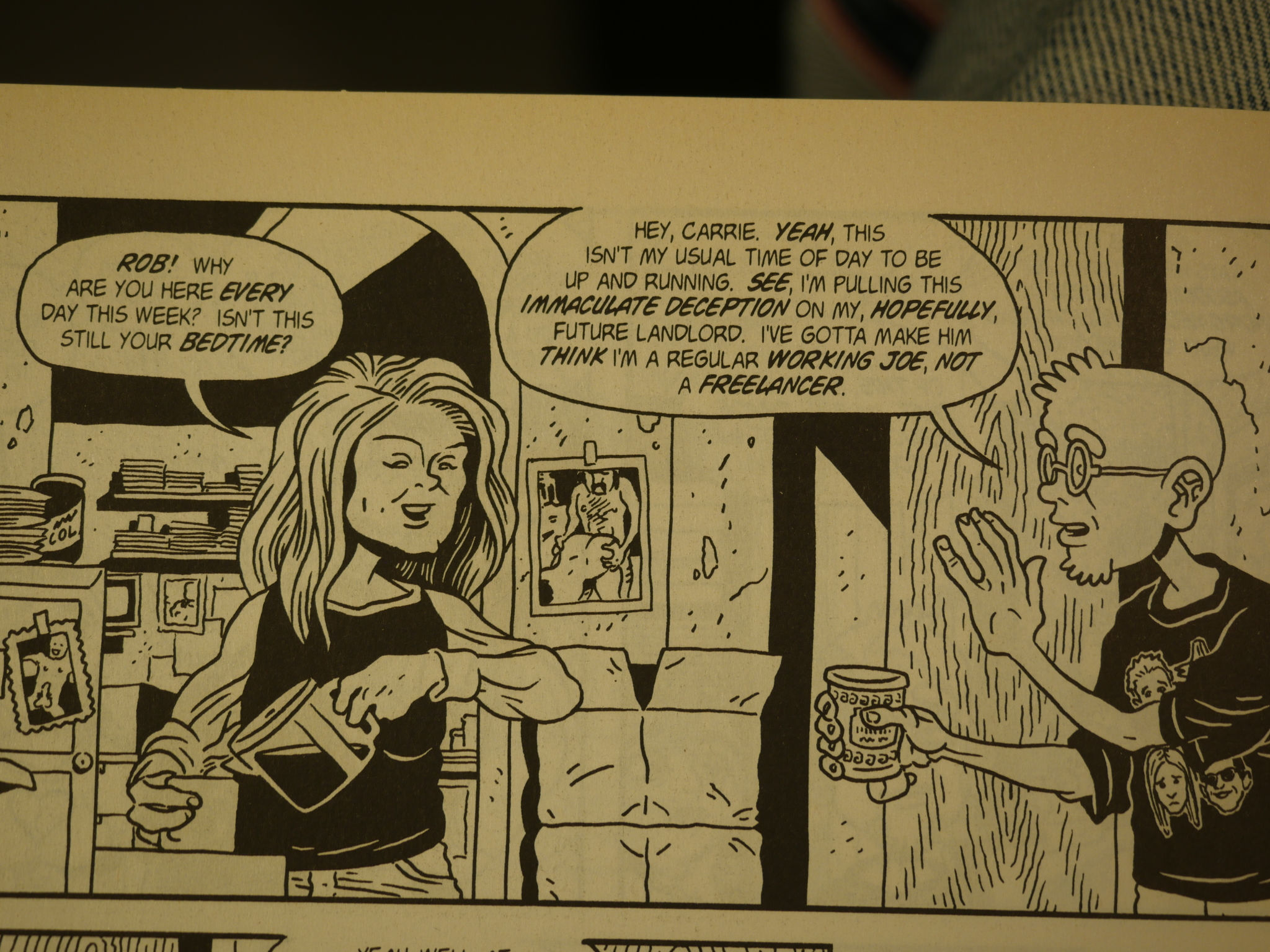 Some of the dialogue is physically painful to read. I mean that literally, actually.  The 90s computer lettering doesn’t help any.  It’s so incongruous with something that mechanical next to Fingerman’s organic lines. 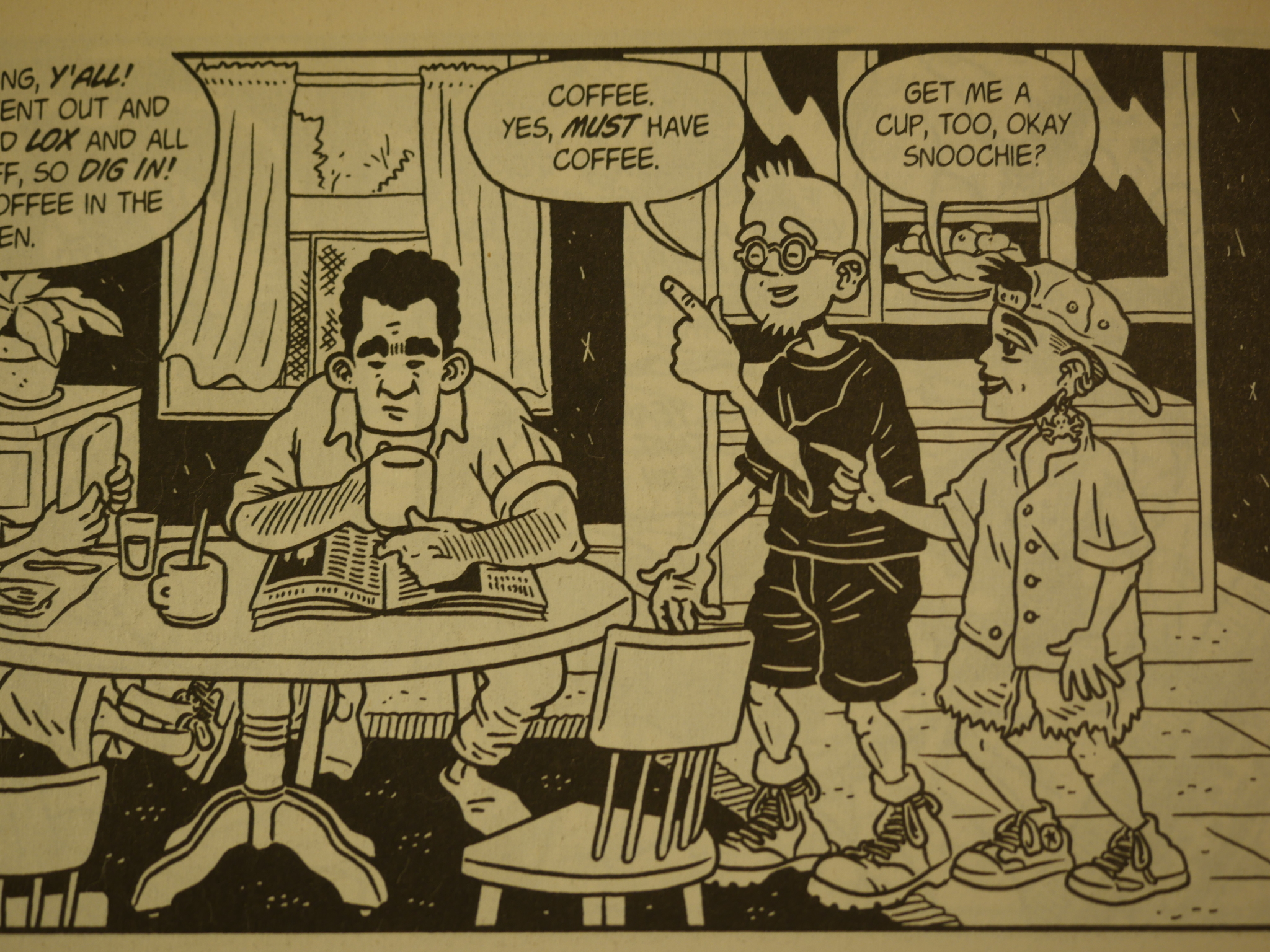 I guess what I’m getting at here is that I just don’t like Minimum Wage a lot, and I’m trying to not be such an asshole about it. But this drawing pretty much sums up everything I find janky about Fingerman’s artwork. Where to start… OK, basically, they all look like deformed gnomes. Their limbs are stick-like, but they wear clothes that somehow cover these sticks and make them look like almost normal human beings. Their heads, hands and feet are freakishly big.

OK, I’ll just stop there with the dissection. I have such a disconnect from his artwork that it stops me from enjoying whatever good points there may be in his work. 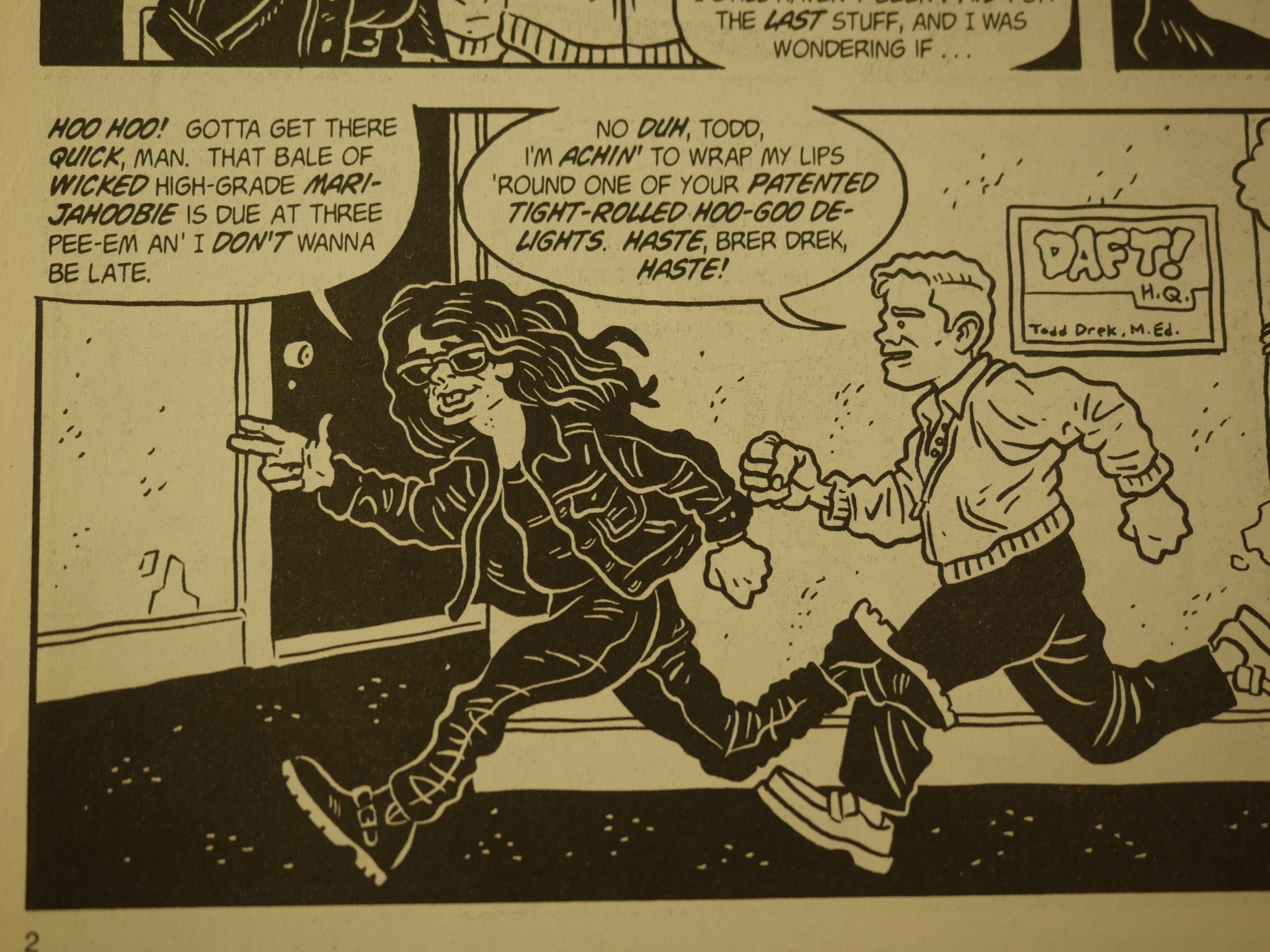 That’s not to say that he’s not an original artist. I’ve never seen anybody use this technique to this extent before: Having people wear black clothes and then draw in the lines of the clothes using, er, white ink? Is that a thing? It’s a peculiar effect. I mean, in nature people don’t have black outlines, but we accept that convention, so why not white lines on black clothes? 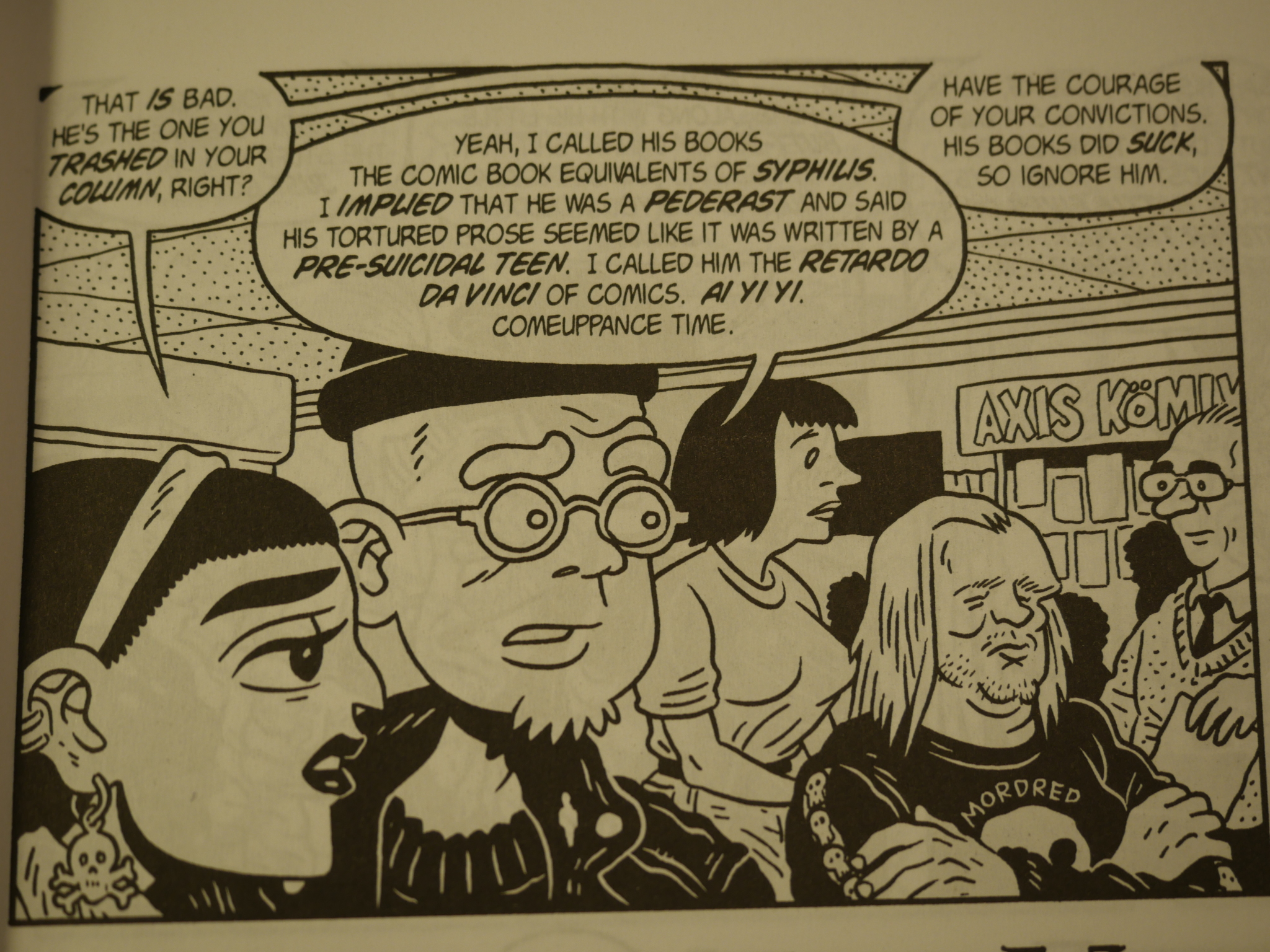 There’s a lot of inside baseball stuff in issue four, where our heroes visit a convention to look at the mouth-breathing comics fans (and sell some comics). And meet up with various people who are given funny pseudonyms and we’re supposed to mirthfully guess who Fingerman is caricaturing. That’s Barry Blair, I guess? I’ve never read any of his stuff. 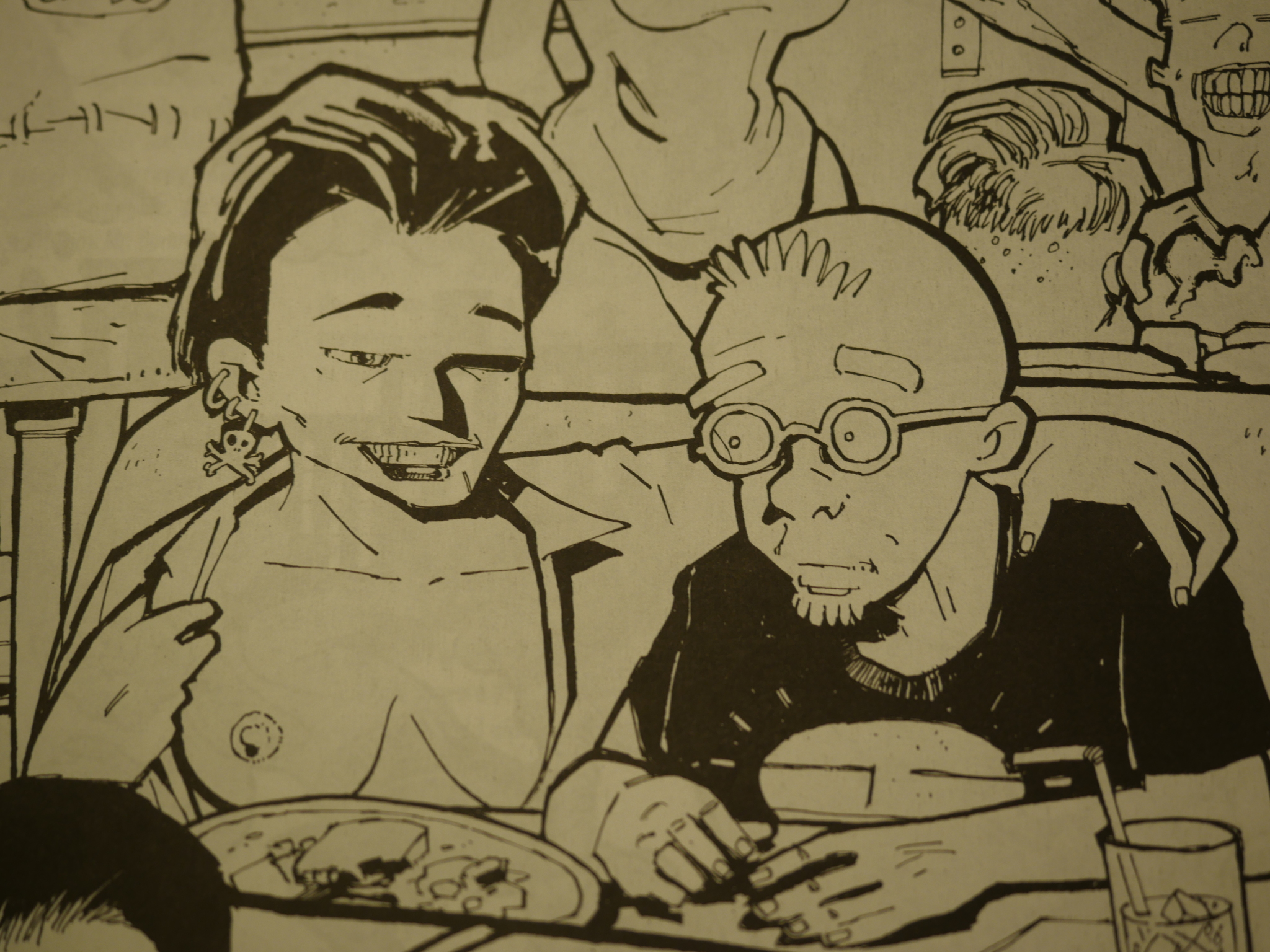 Every issue of Minimum Wage includes at least a couple of pages of other artists doing their versions of the characters from the book. It’s fun. Here’s Ted McKeever. 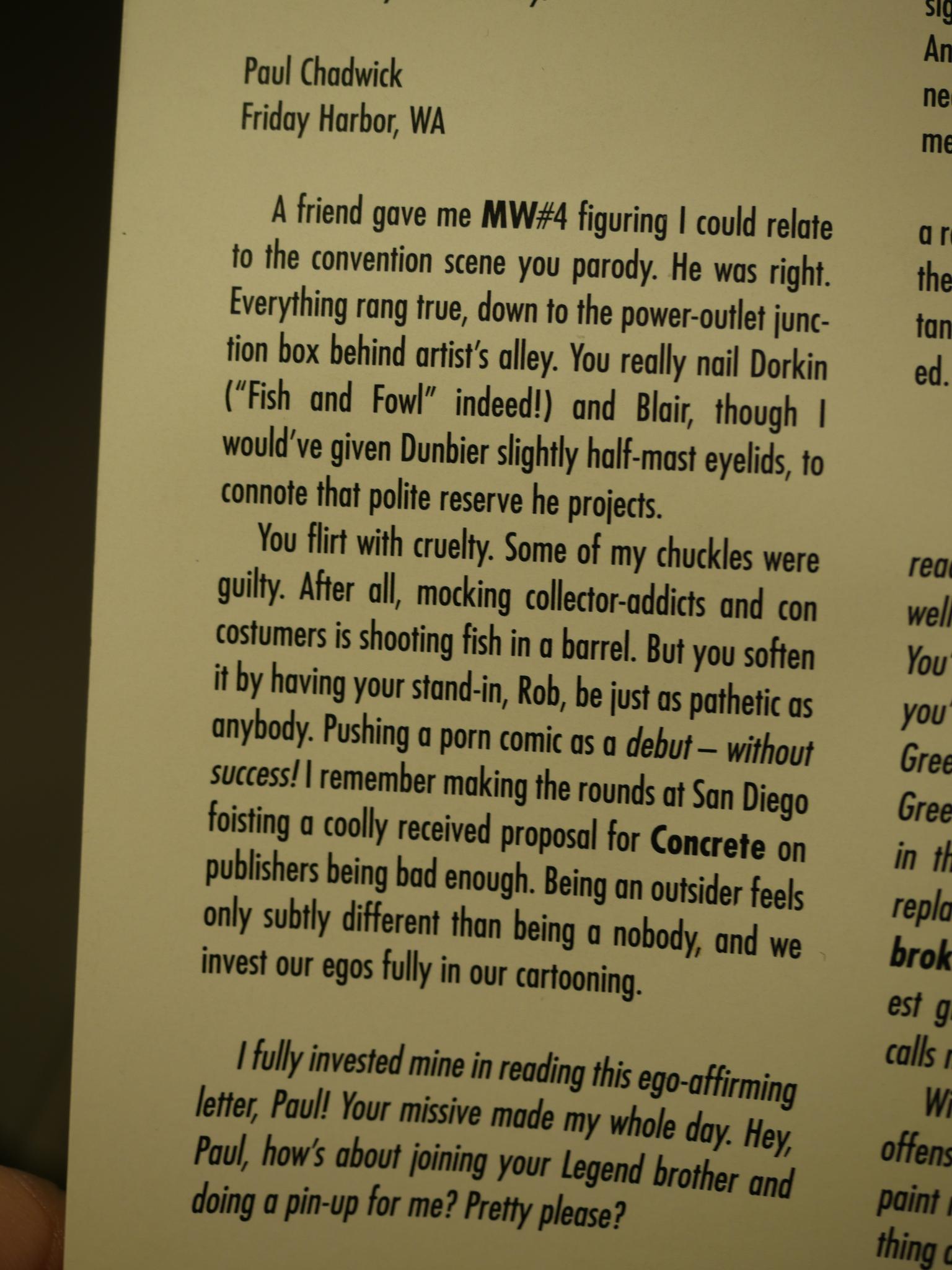 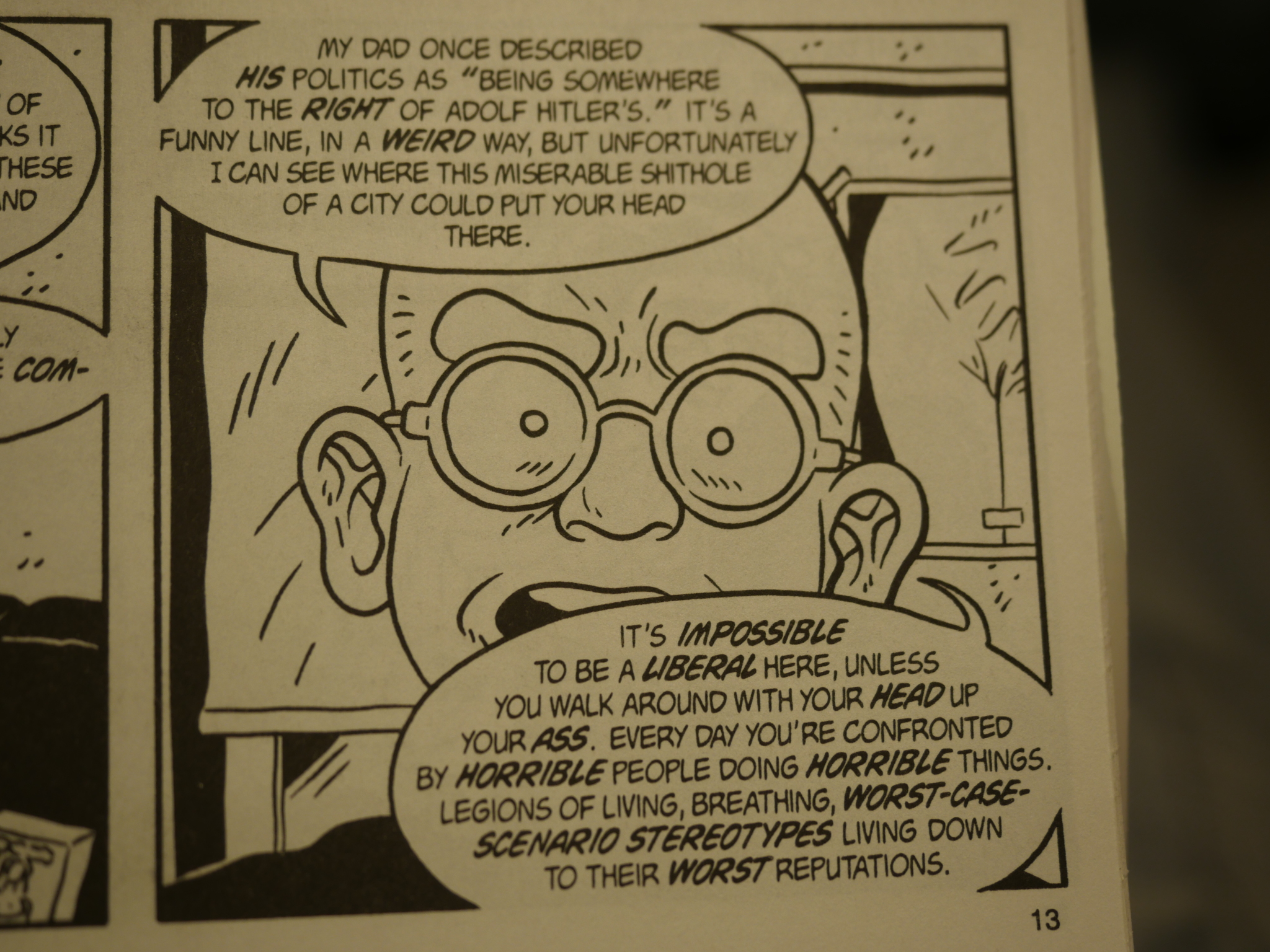 Yeah, it’s impossible to live in New York and be a liberal. Nobody does that.

Did I mention that the characters talk a lot? 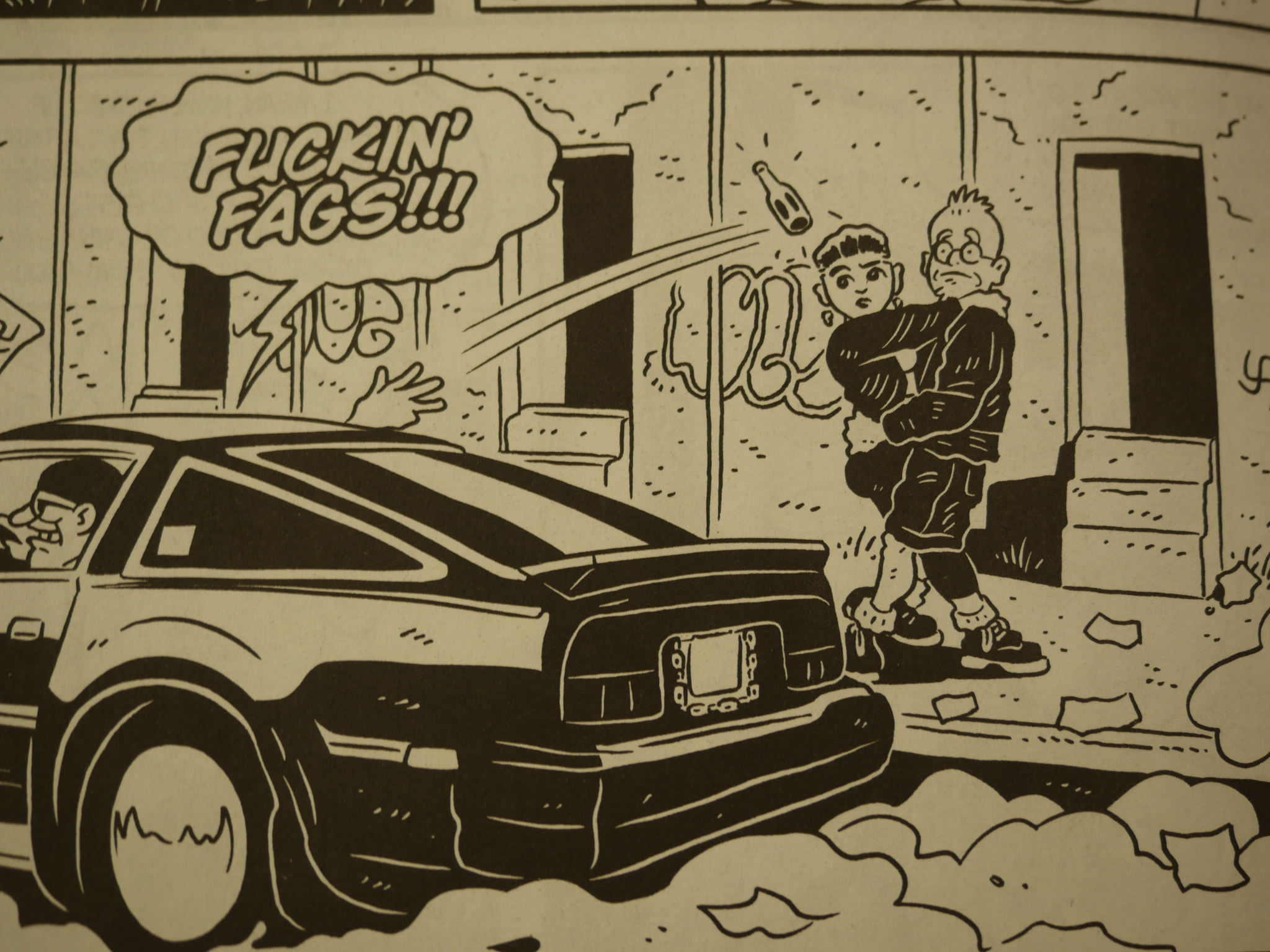 The series has an “issue of the week” kinda feel to them. One of the episodes is about abortion, this one is about gay bashing (sort of; that’s a man and a woman being thrown a bottle at), and so on. 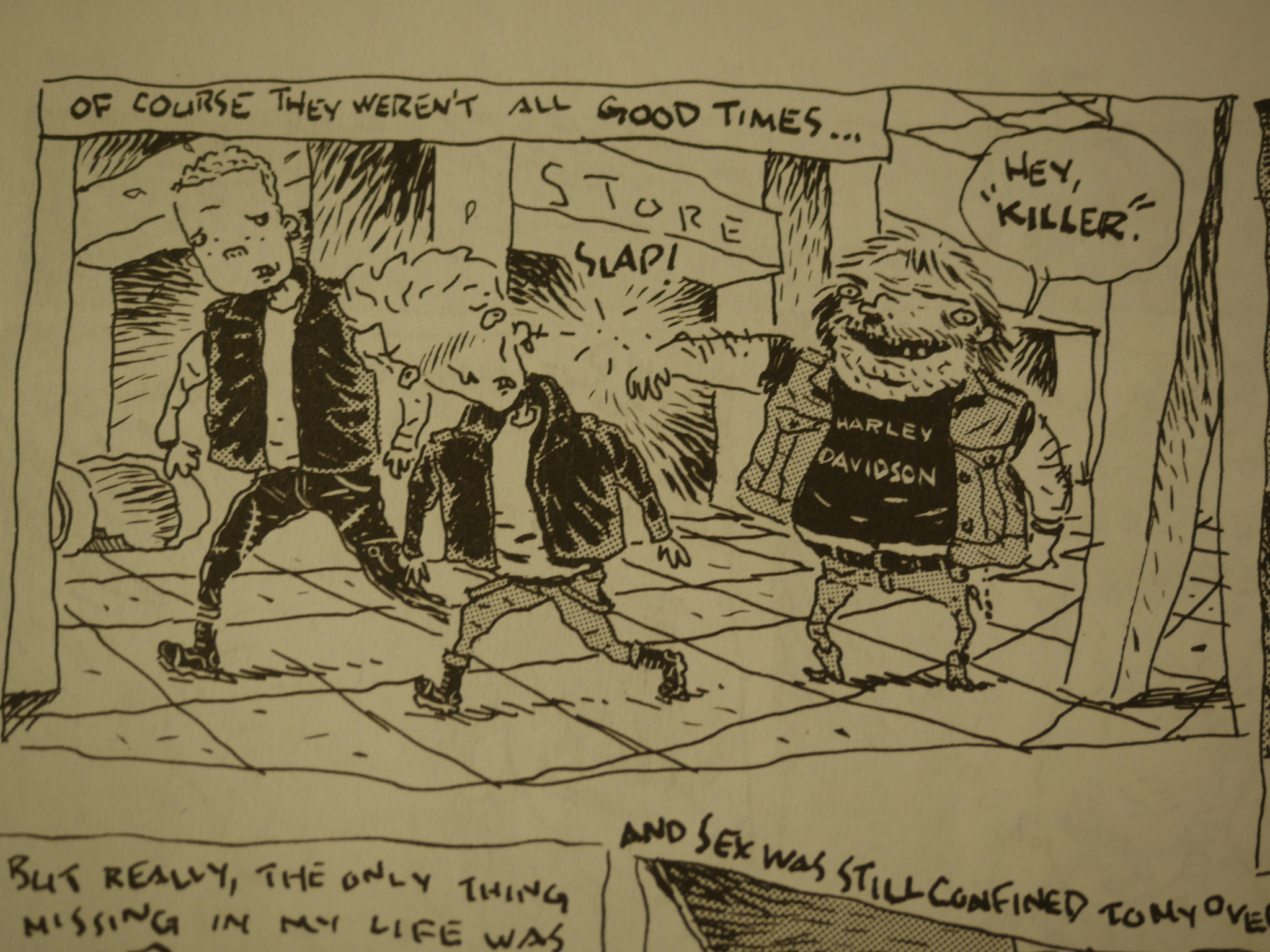 By issue nine, Fingerman reduces the number of pages of the main feature (due to Minimum Wage not selling a lot and having to take commercial jobs), and adds backup stories by other artists. First out is Pat McEown. 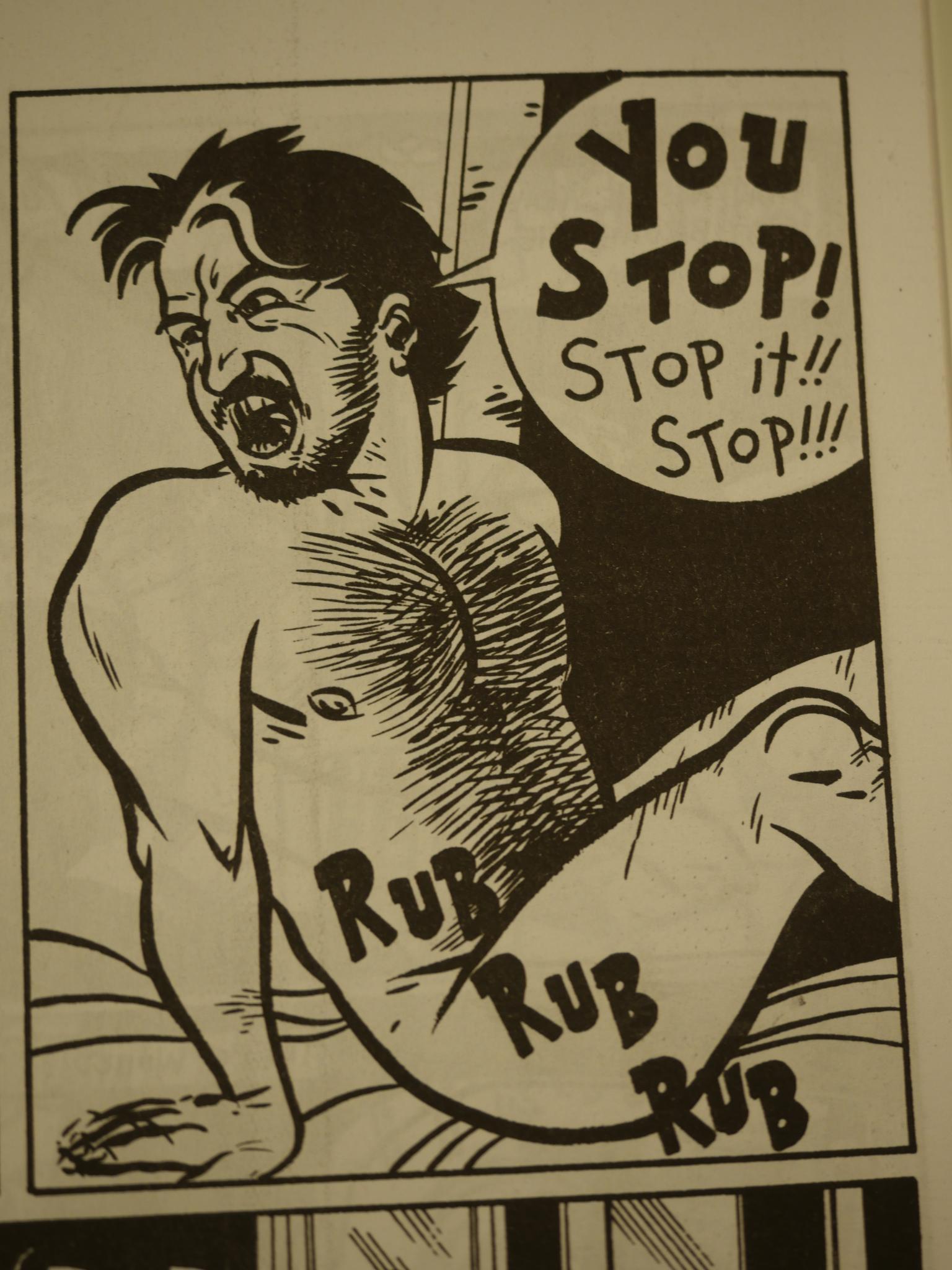 In issue ten we have a hilarious bit by Dean Haspiel. Somebody should seriously get their act together and collect all his bits and pieces from all over the place. 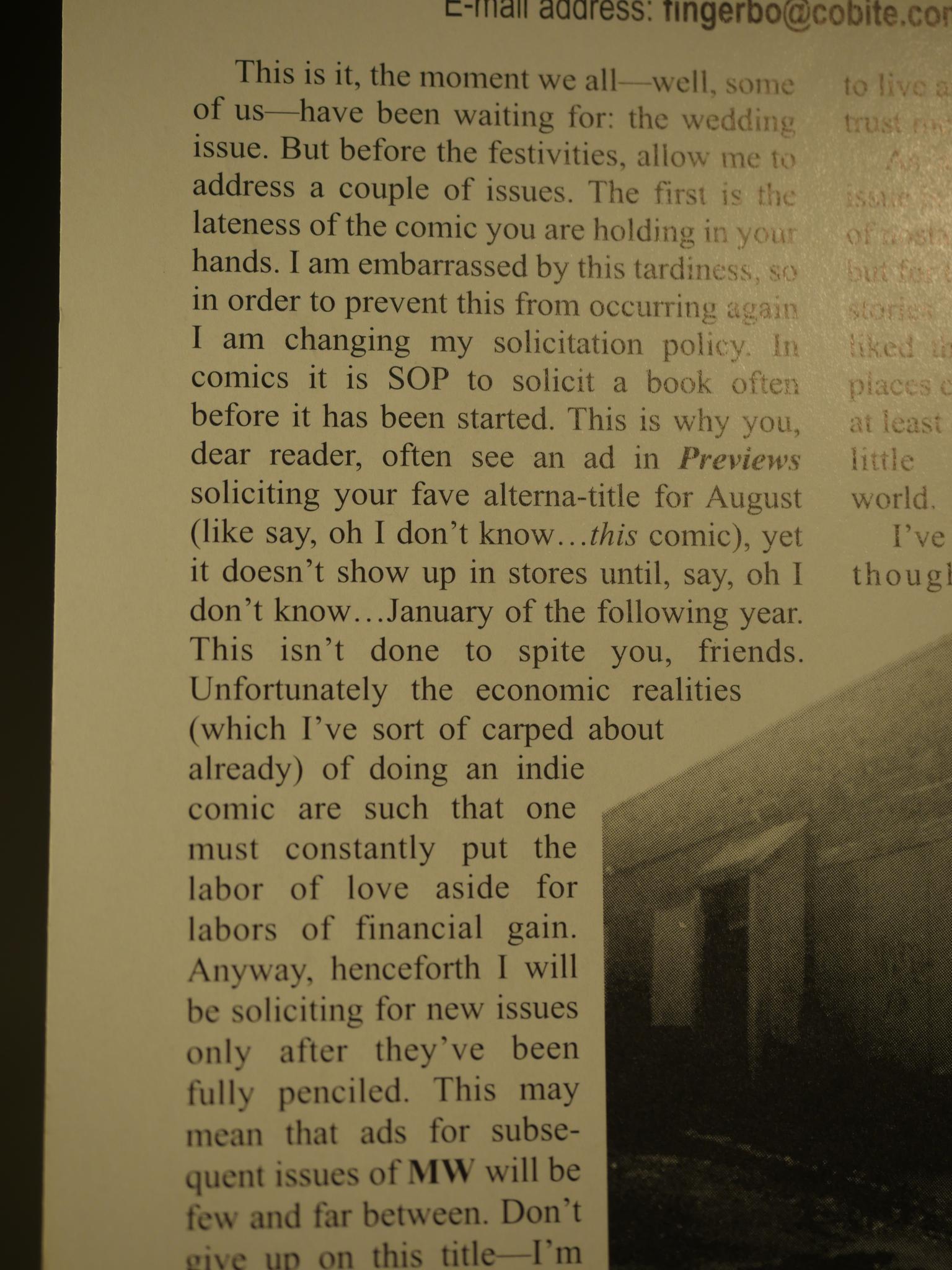 And in issue ten Fingerman announces that he’s going to stop announcing Minimum Wage until it’s pencilled, and no more issues were published after that. 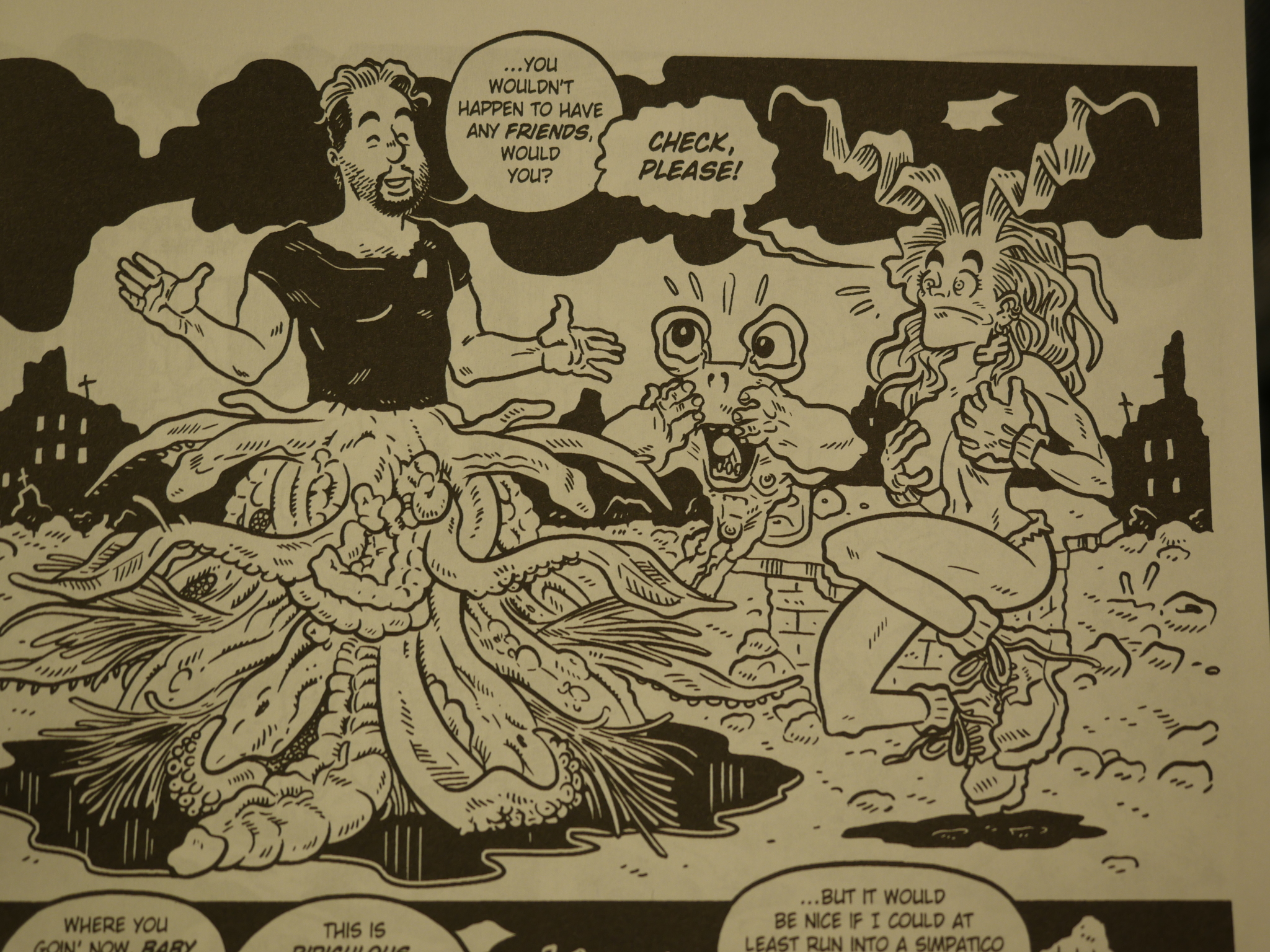 Which leaves us with Monkey Jank. It’s a post-apocalyptic humour series originally published by Penthouse Comix. Fingerman says in the notes that while putting the issue together, he decided to dump most of the pieces that had originally been published, and created some new ones instead.

Fingerman has continued to publish through a wide variety of publishers. He re-started Minimum Wage (via Image) last year (I think). I’ve read it, and it’s quite different in tone from the original series.