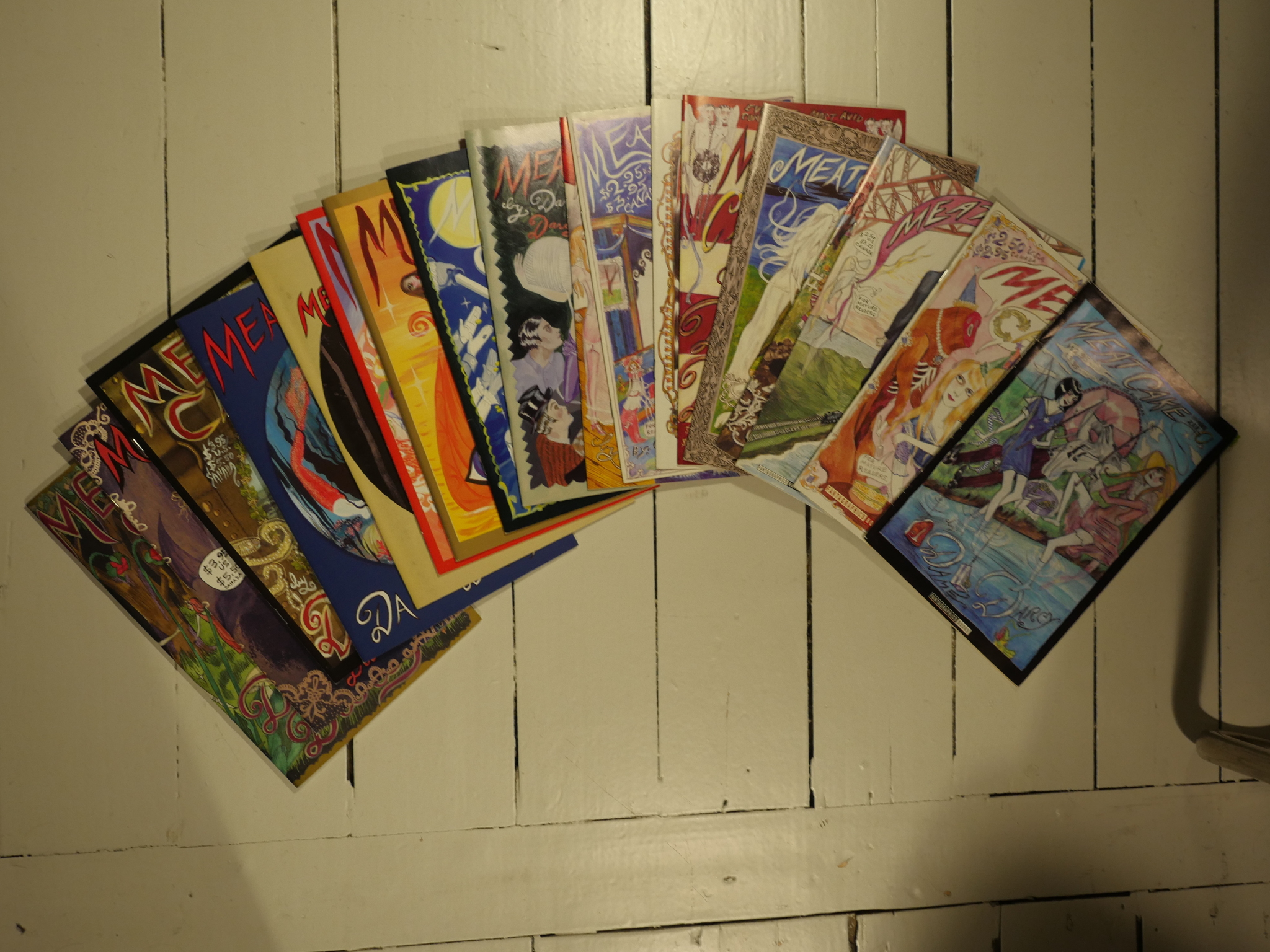 I’m going to try to write this blog article without using the word “quirky”. 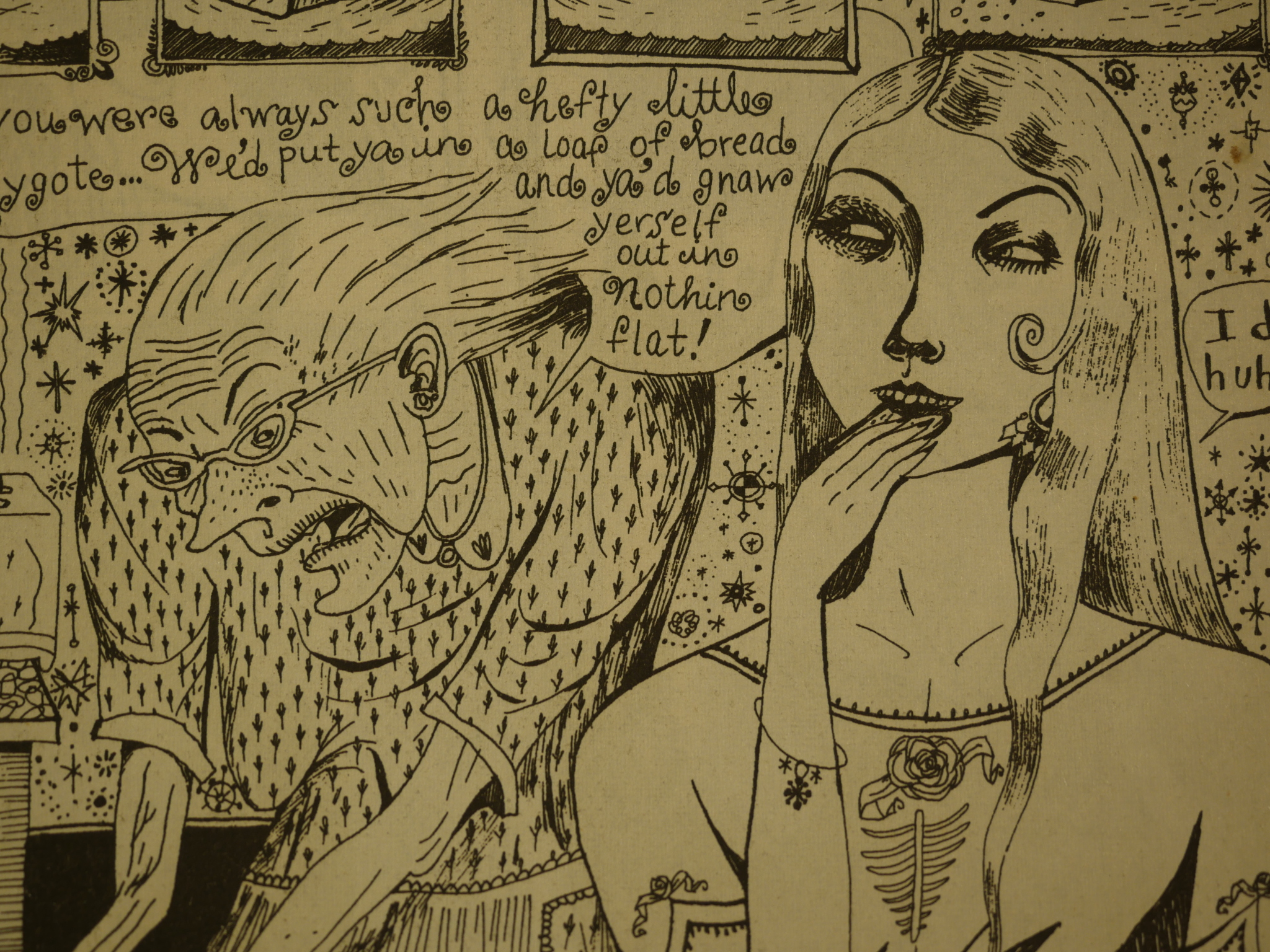 I remember getting these comics about once a year throughout the 90s, and every time I was all “yay!”. It’s an utterly original comic book, filled with strange adventures and loopy, obsessive artwork. 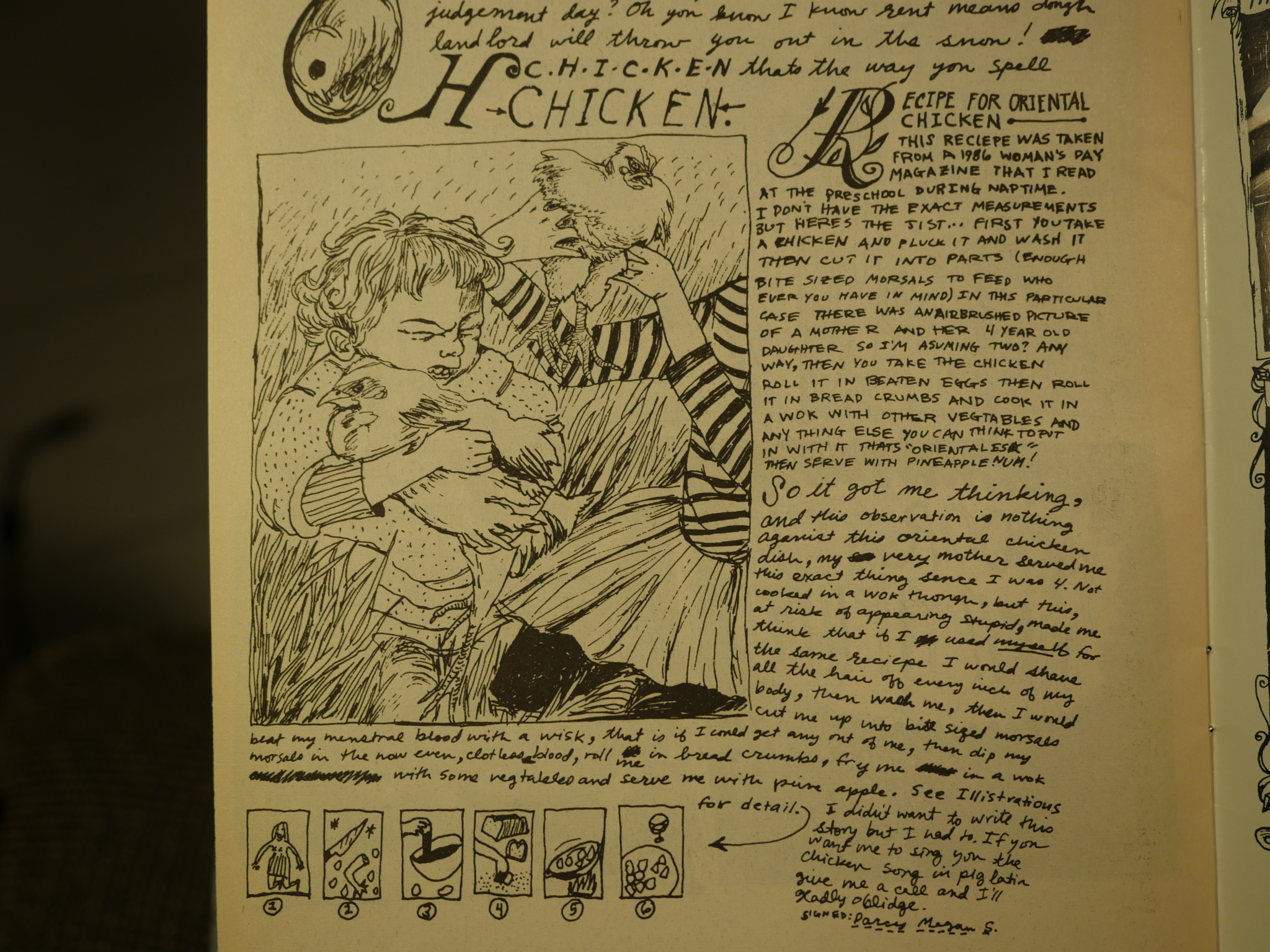 There are also these text pieces written without a lettering guide. This is from issue zero, which is a Fantagraphics reprinting of the first, self-published version of Meat Cake. (Originally from 1991, reprinted in 1996.) 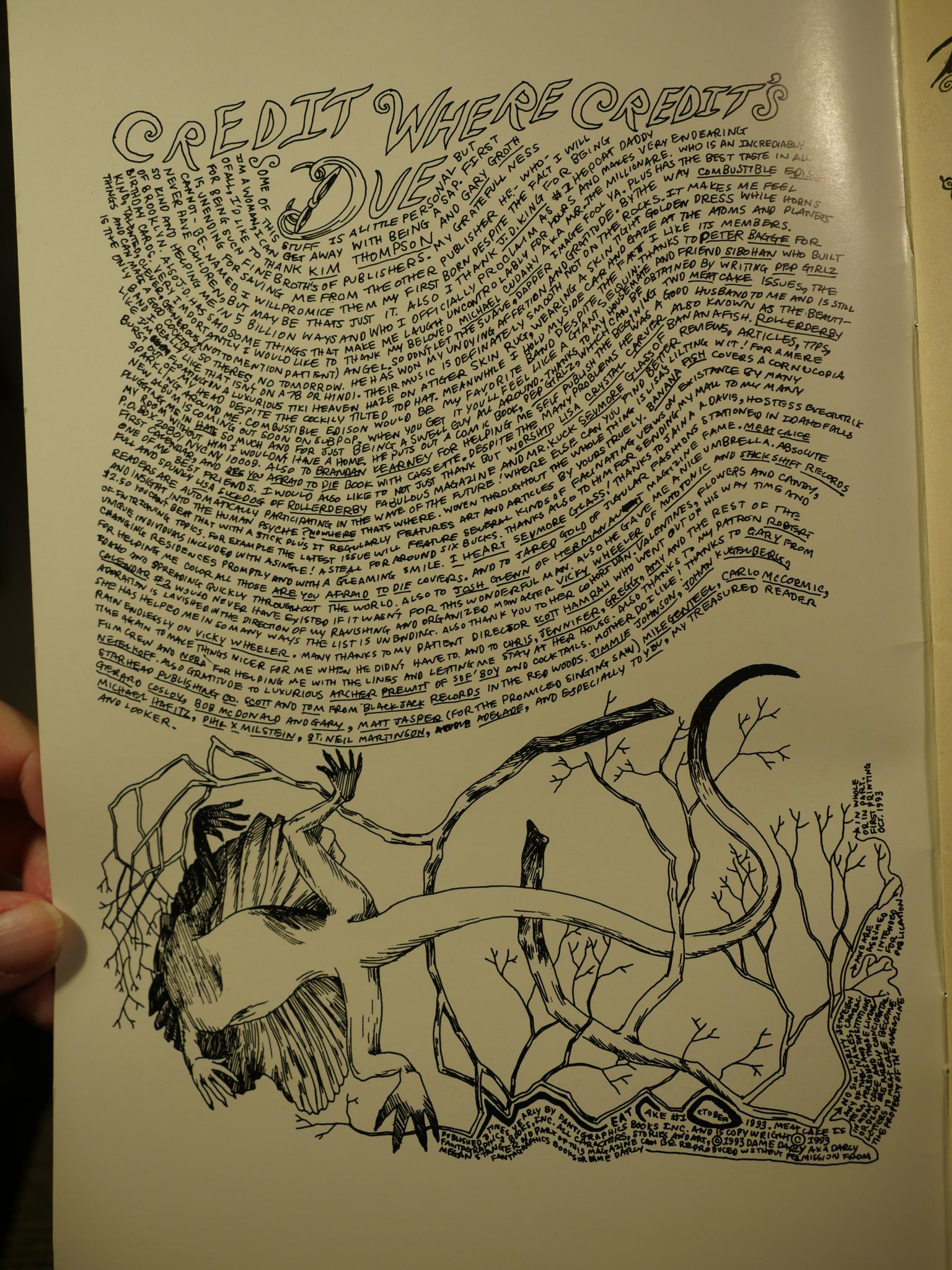 Darcy often writes longer texts in this rather exhausting manner. Trying to read these things is… trying, but I really enjoy the way that almost every single ink stain that’s printed in these comics come from Darcy’s pen. This is the indicia page. The only things that are not handmade by her is the Fantagraphics logo (the 80s version) on some covers, and pictures of Dame Darcy that are featured on many of the back covers. 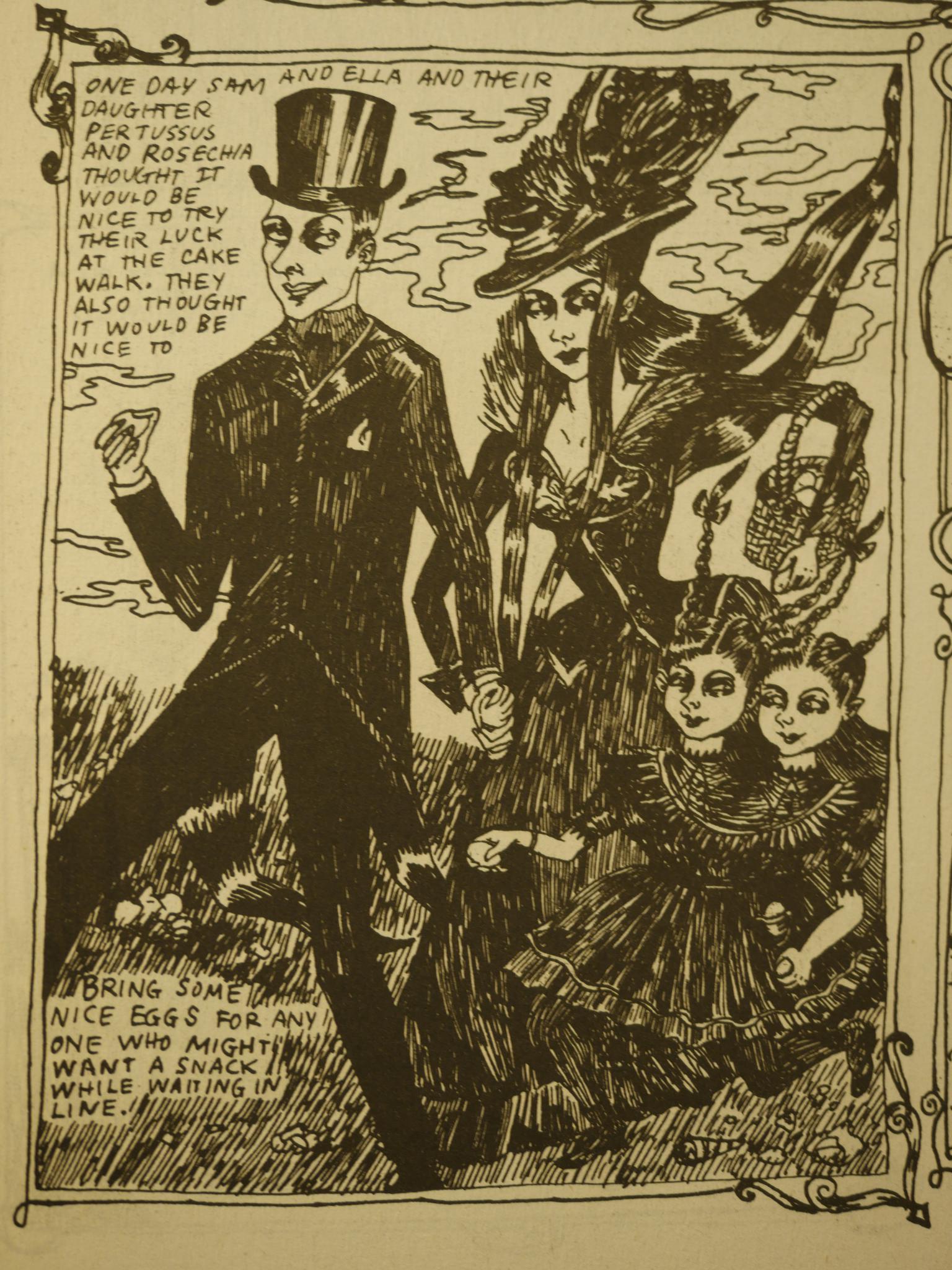 Darcy’s artwork is so lovely. It’s very Victorian and luxurious. It reminds me slightly of Richard Sala, but probably more because he’s also referencing Victorian artwork than as a direct influence. 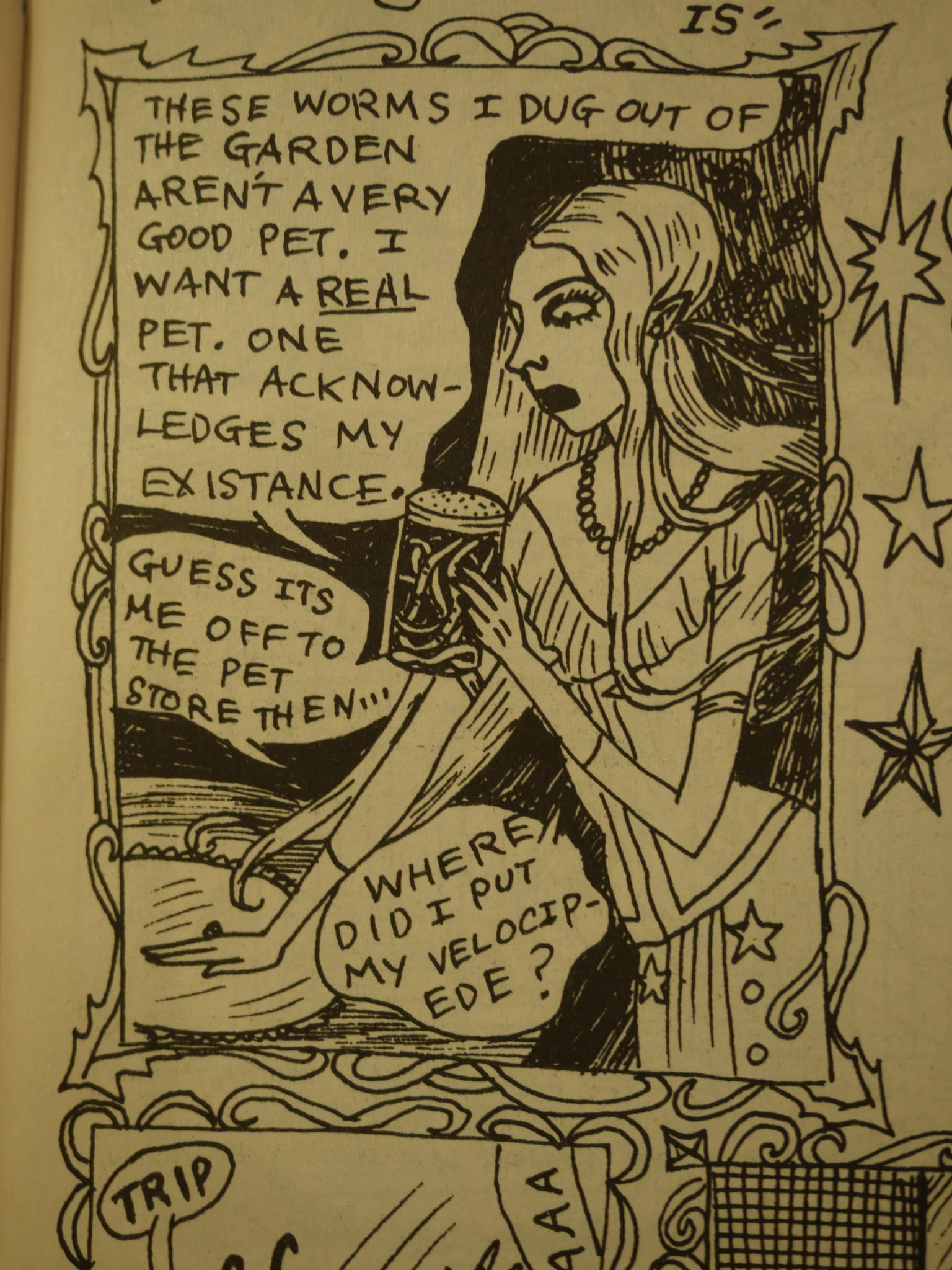 While I was always happy to find a new Meat Cake issue in my hands, it was always guaranteed to put me to sleep. Not because it’s boring. I think it’s because the logic and rhythm of her stories are quite similar to how my brain works when falling asleep. I mean, look at the monologue in this panel. Look at it.

The only other comic book that reliably puts me to sleep is the beloved Krazy Kat, and it’s for similar reasons.

So I wondered whether re-reading these comics would put me to sleep again, and… they did. A couple of times. 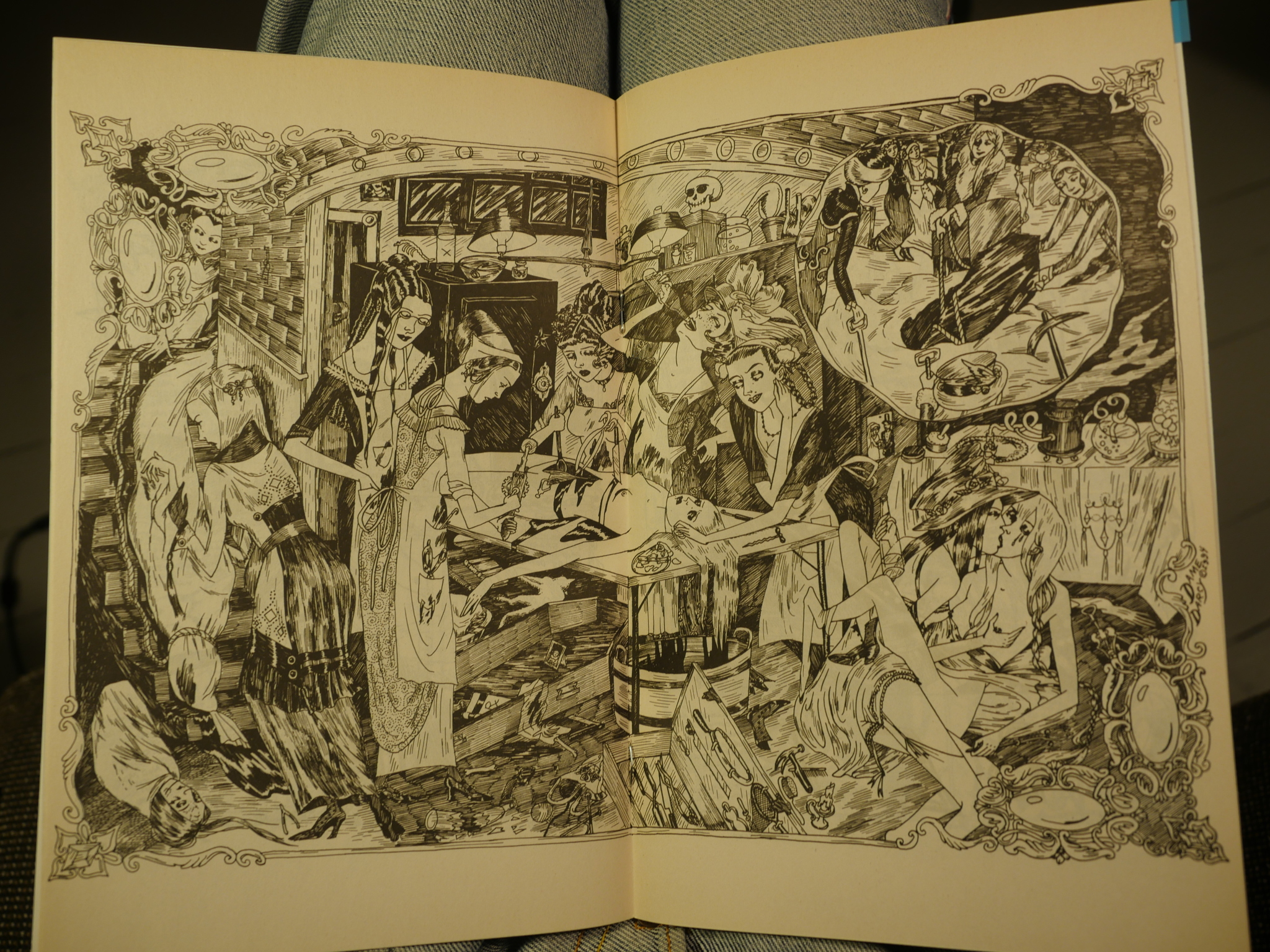 Darcy doesn’t include too many panoramas like this, but when she does, they’re luxurious. This was later available as a print. 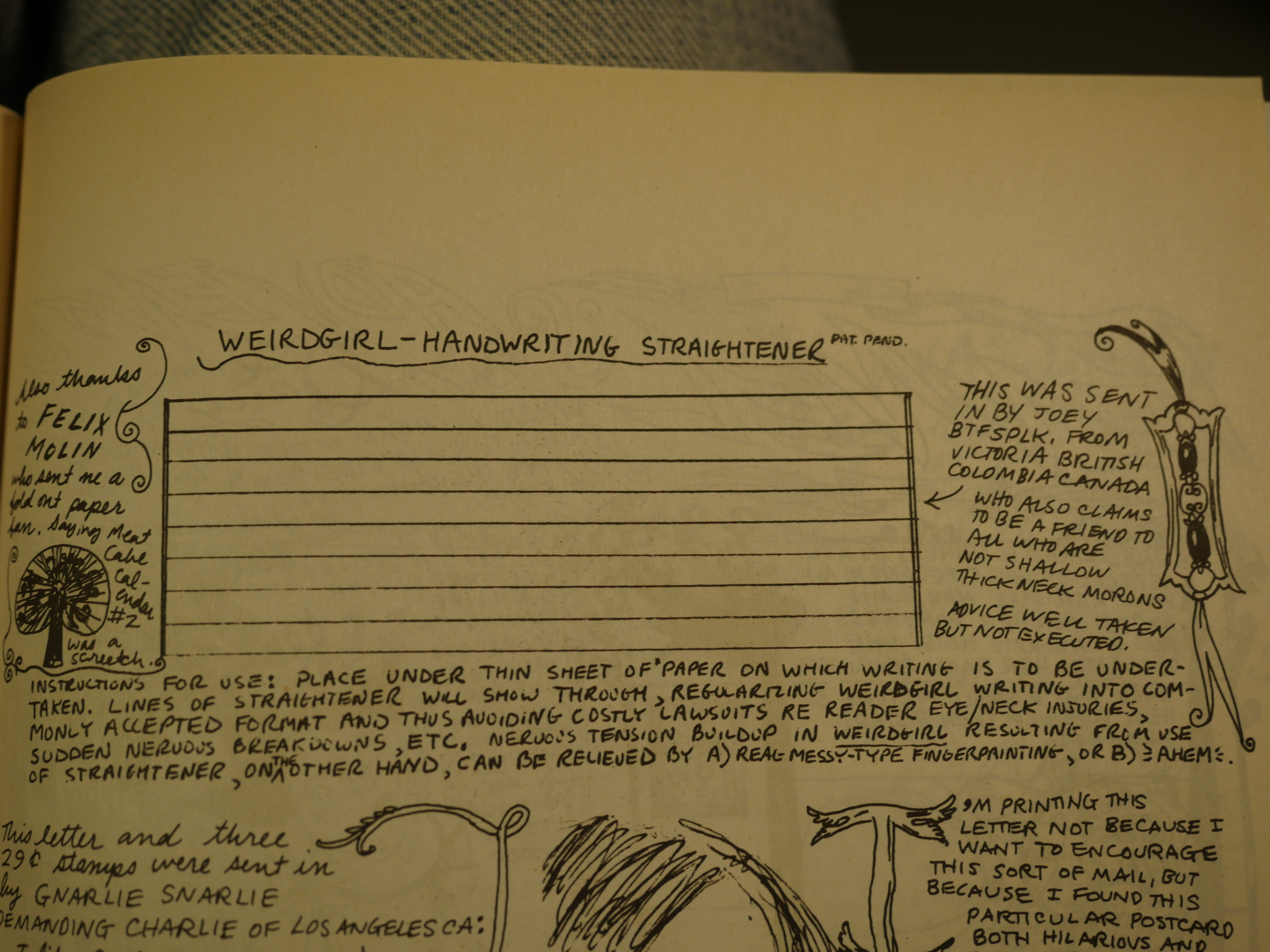 The letter pages are filled with oddball letters, as you’d expect, but there’s also wise guys like this. 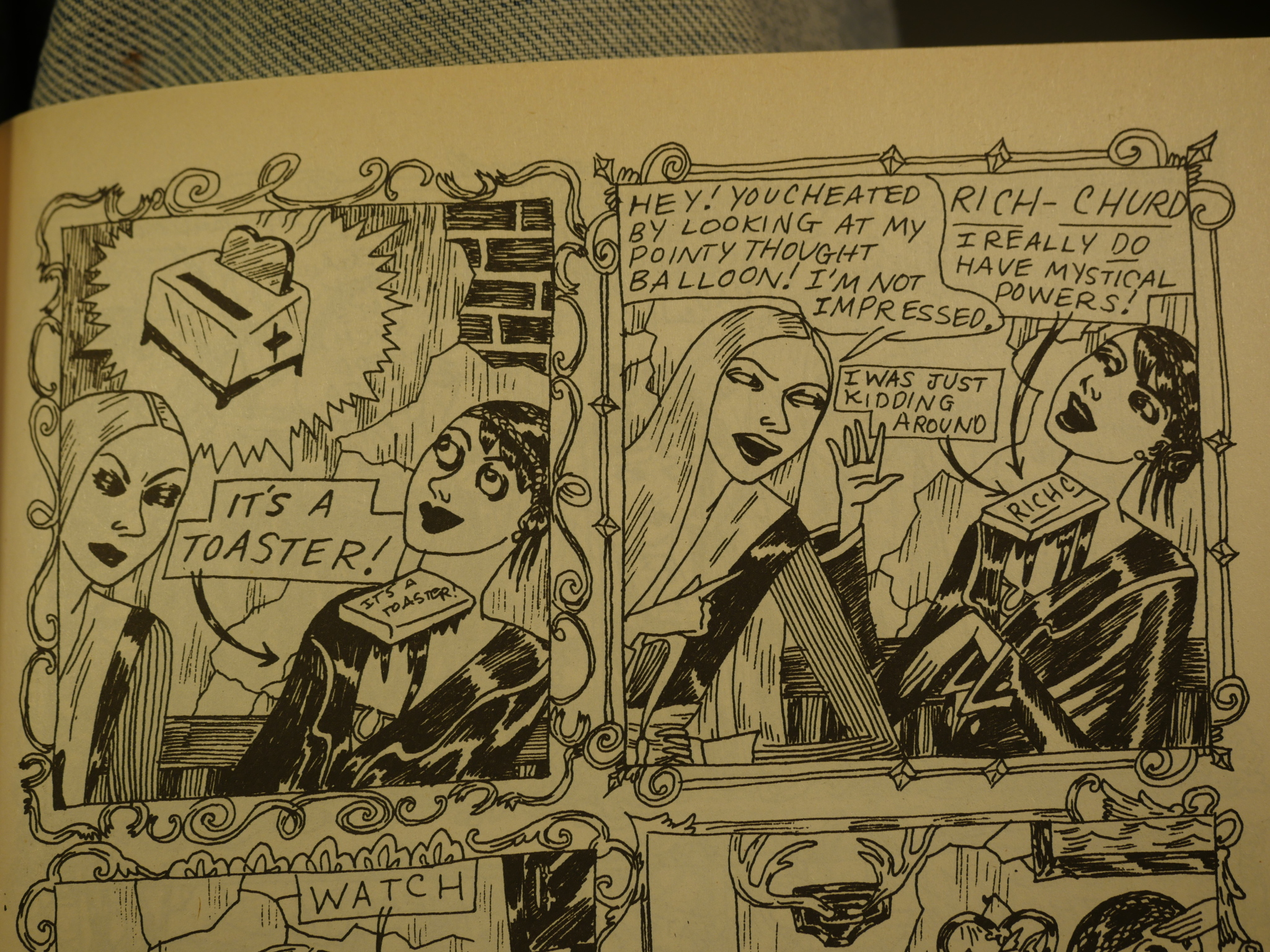 Love those frames around every single panel.

Yes, that woman has a tablet coming out of her throat, gushing blood. Her name is Strega Pez, and that’s the only way she can talk: By ejecting giant inscripted Pez tablets out of her neck. 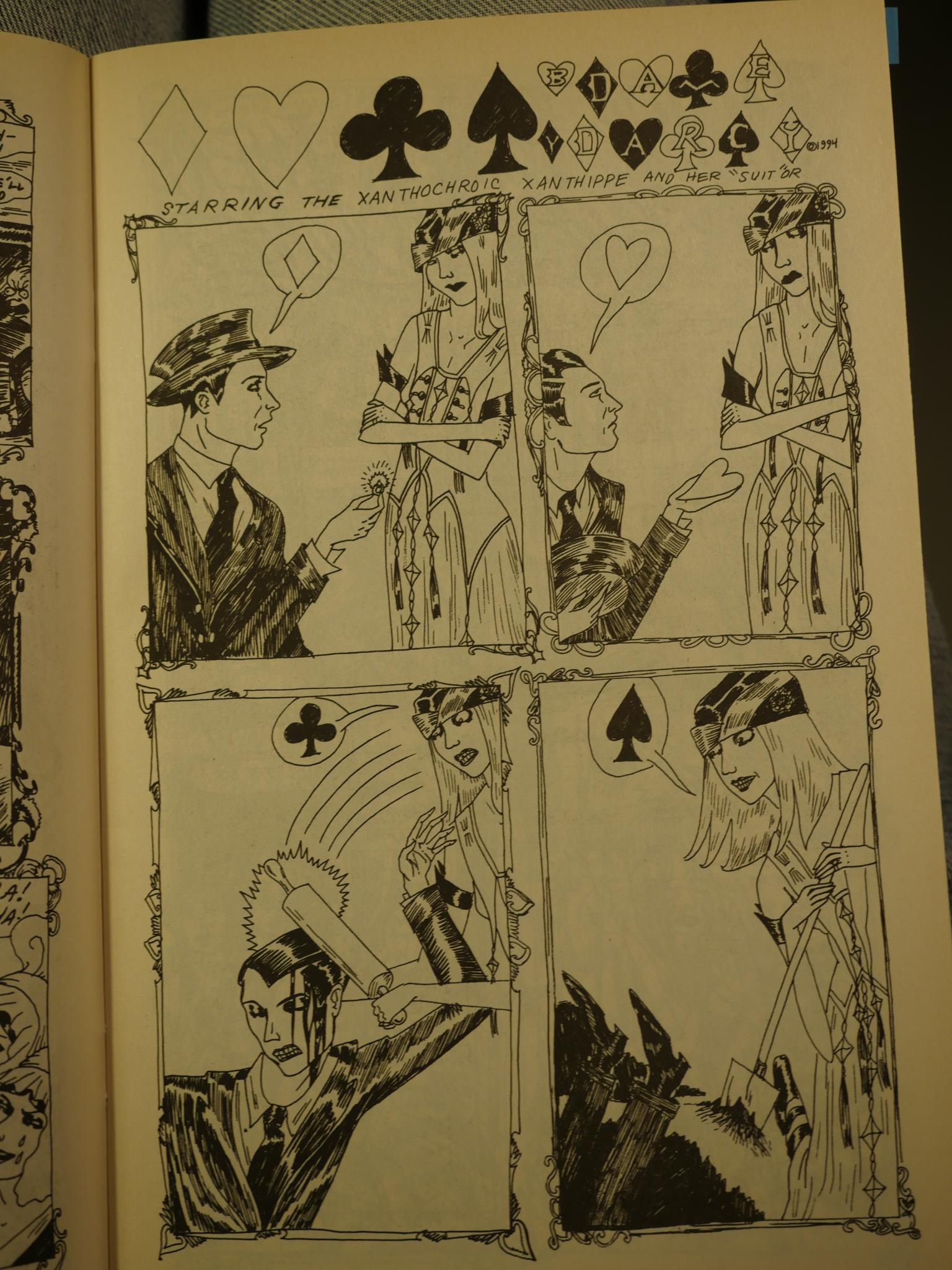 While quite a few of her pieces are funny, most of them are not straight-up jokes, but there’s a few, like this very pretty one. 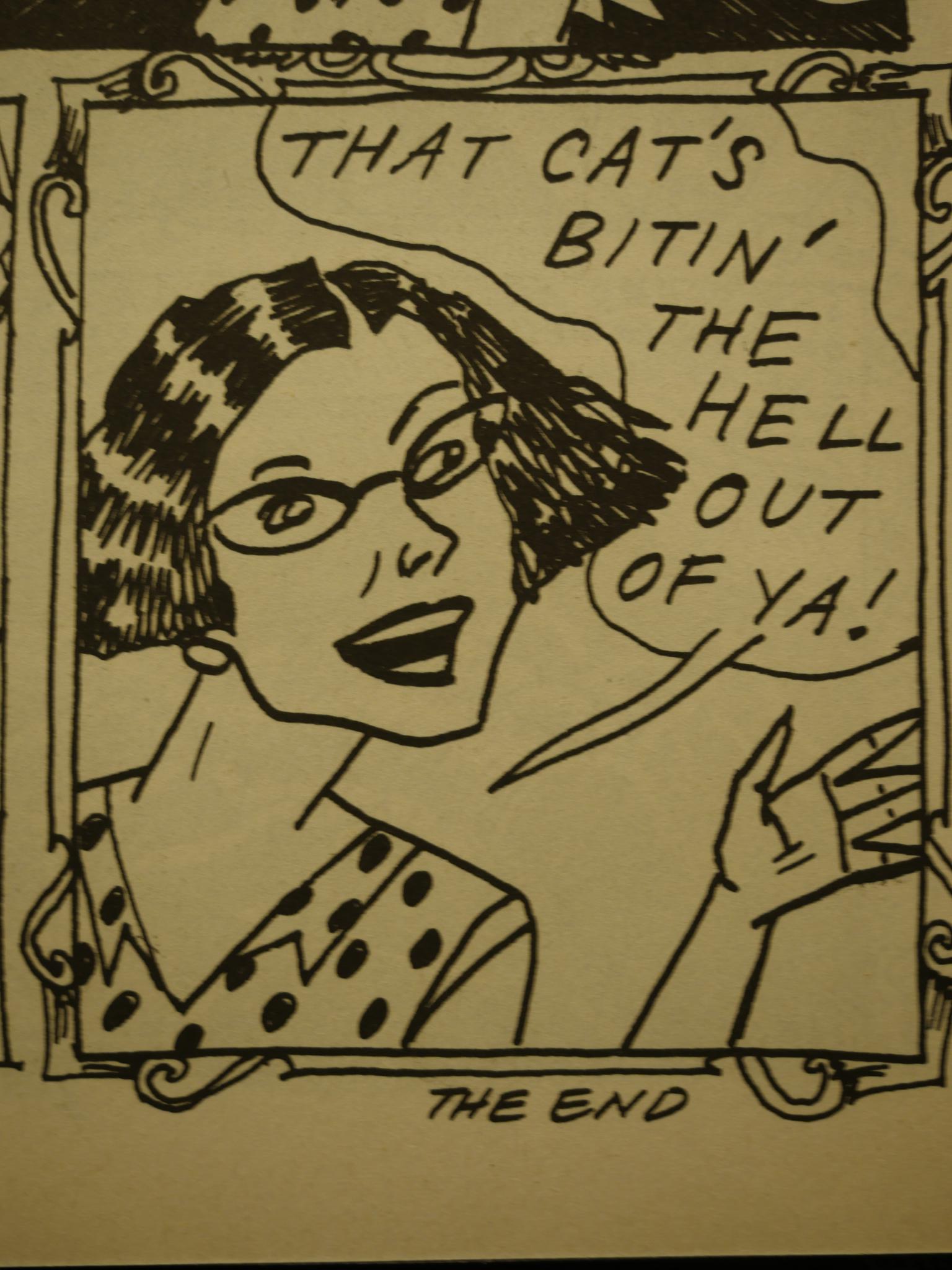 Helena Harvilicz makes an appearance, like she did in that Pat Moriarty story. 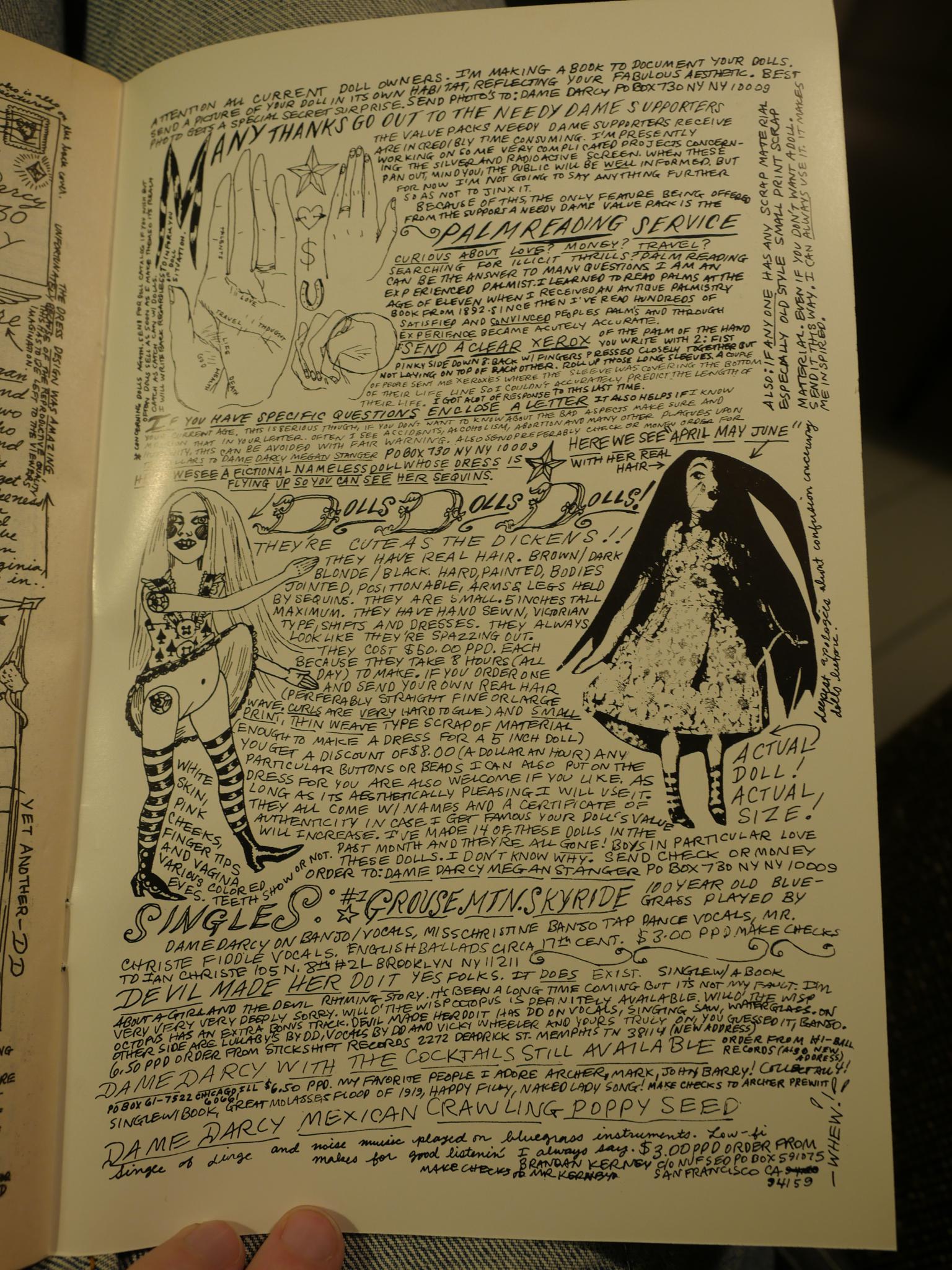 Darcy has ads for a bewildering number of items and services that she does, like a palm reading service, dolls, lots of singles and videos, and so on. She also had a rock band, and is an actress, and had a long-running show on cable access in New York. 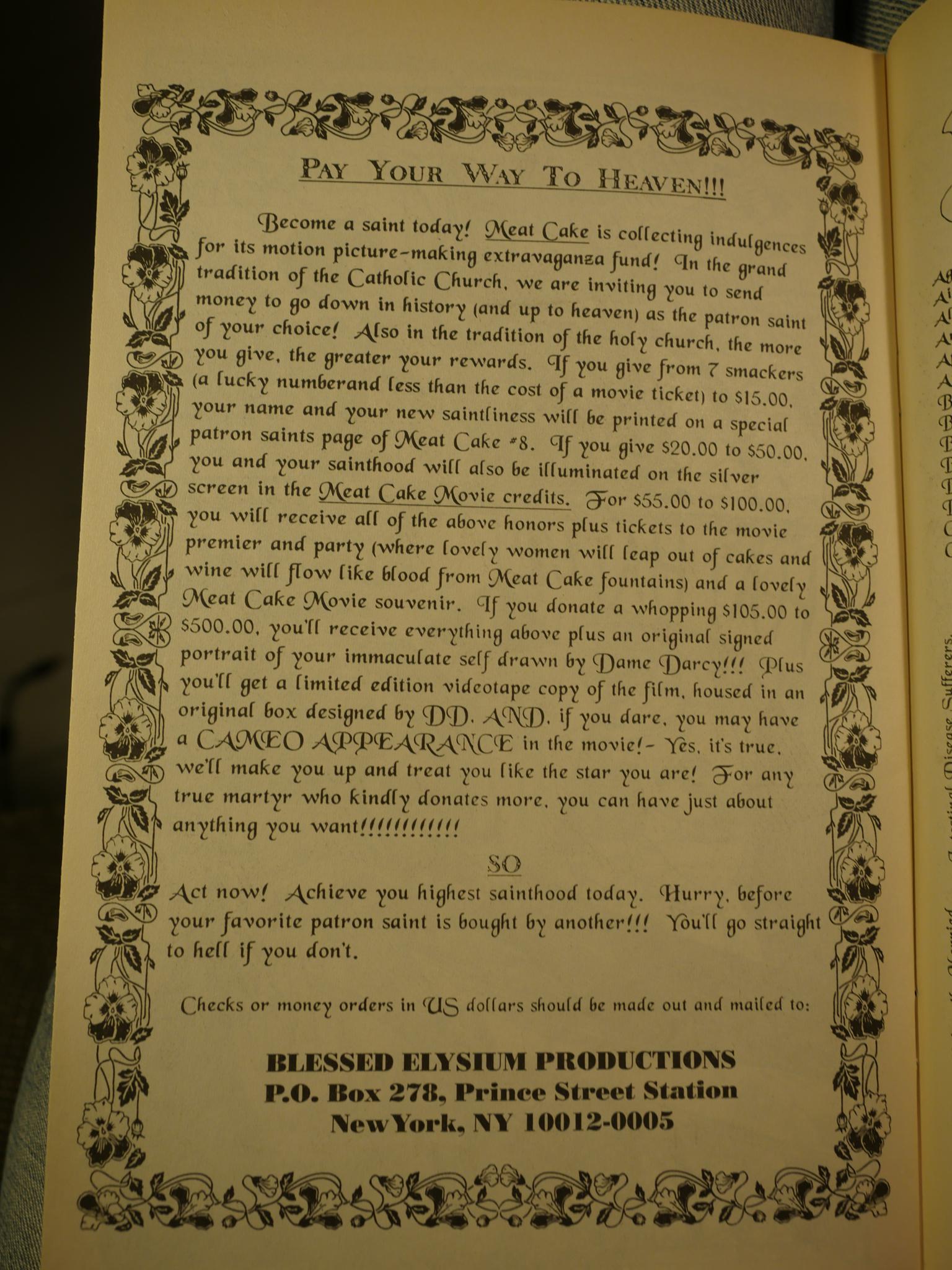 She invented Kickstarter a couple of decades too early. 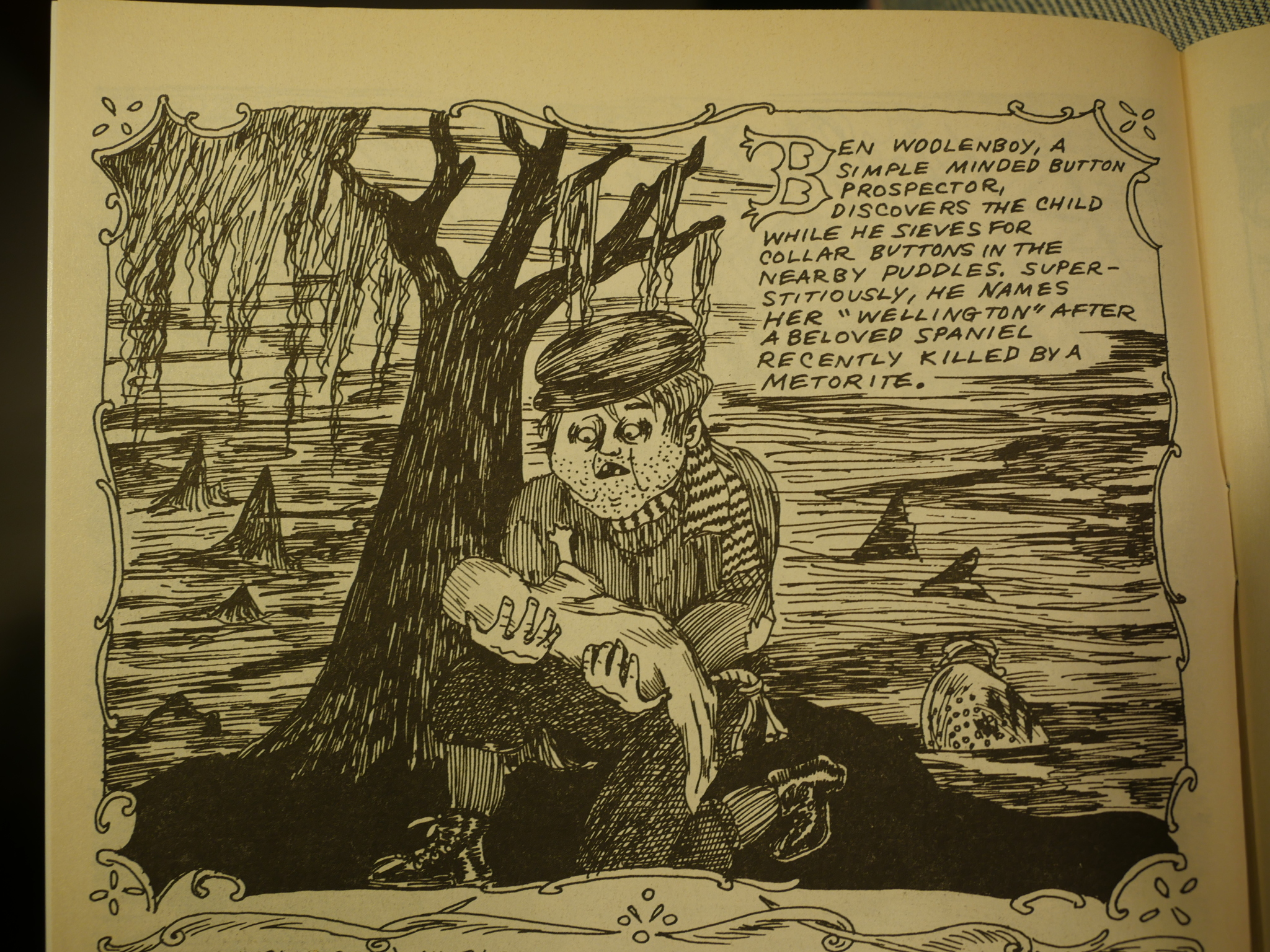 Alan Moore wrote a story for issue nine. I have no idea how that happened, but it’s quite instructive to contrast the result with one of her own stories. While Moore seems to follow her general mode, it’s clear how much more distanced and cold Moore is compared to Darcy. Moore is funny, but it’s an easy, dismissive absurdity, instead of one that contributes to a world-view. Darcy has a selfish shellfish, but it works in the context. A “simple-minded button prospector” can’t really go anywhere interesting. 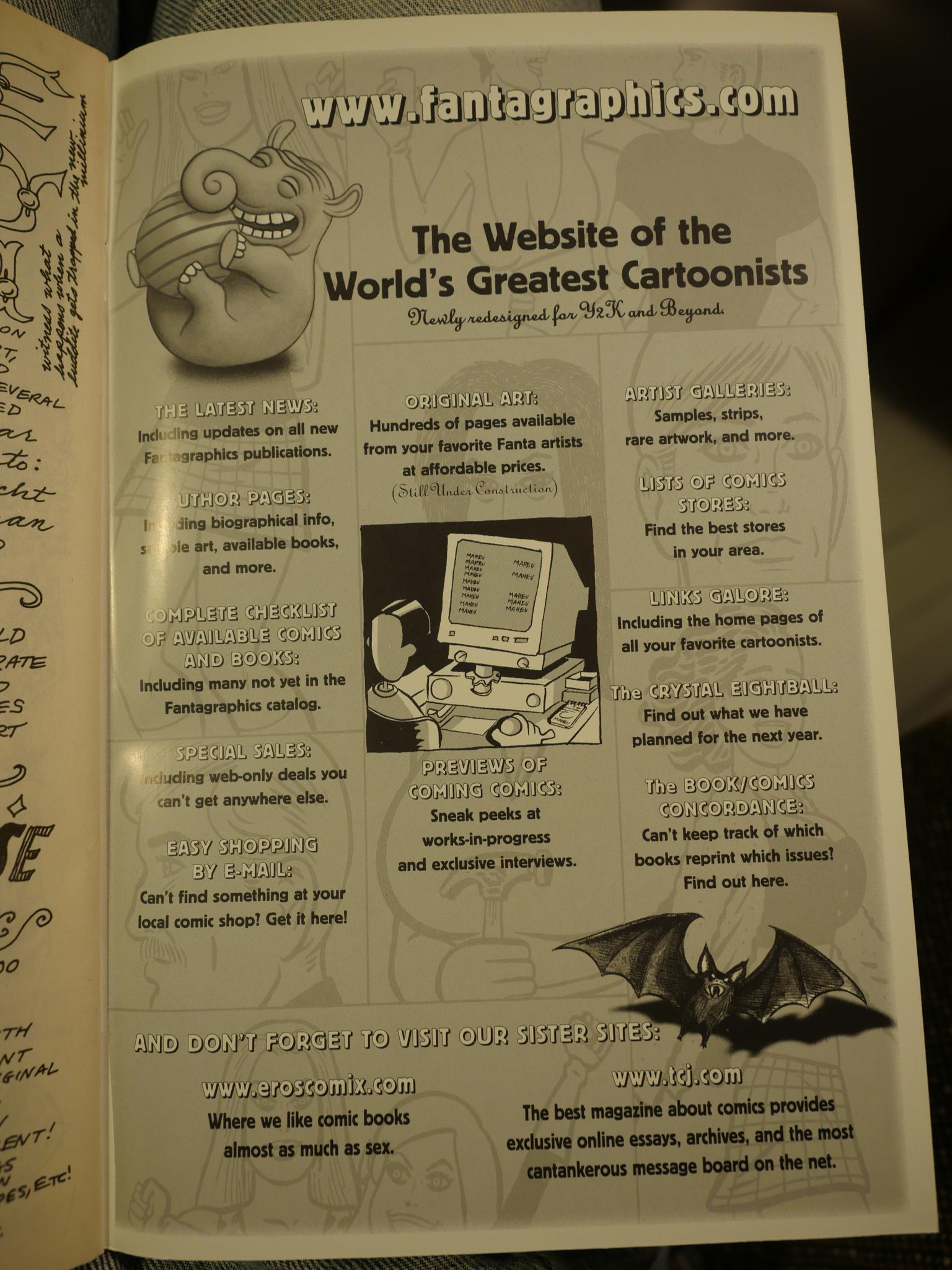 Eek! For two horrible issues, Fantagraphics includes a house ad, and it’s incredibly jarring. So digital in this stream of organic. 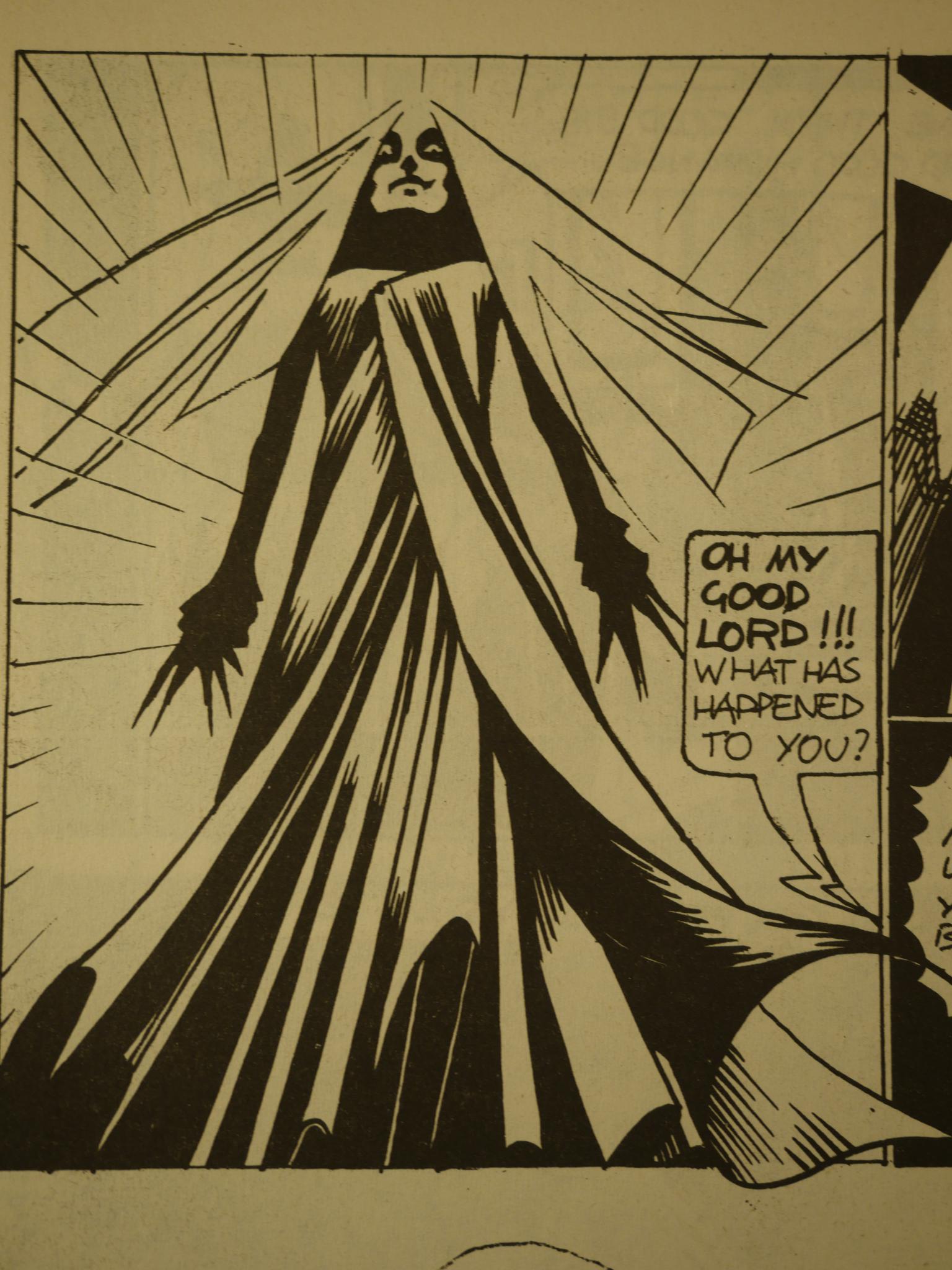 We’re now up to 2001 (and issue 11), and Darcy includes a growing number of people she collaborates with. All of them are on the scripting side, except this story, which is drawn by “Tomasso and Nicolao” (no first names given). It’s also pretty jarring. 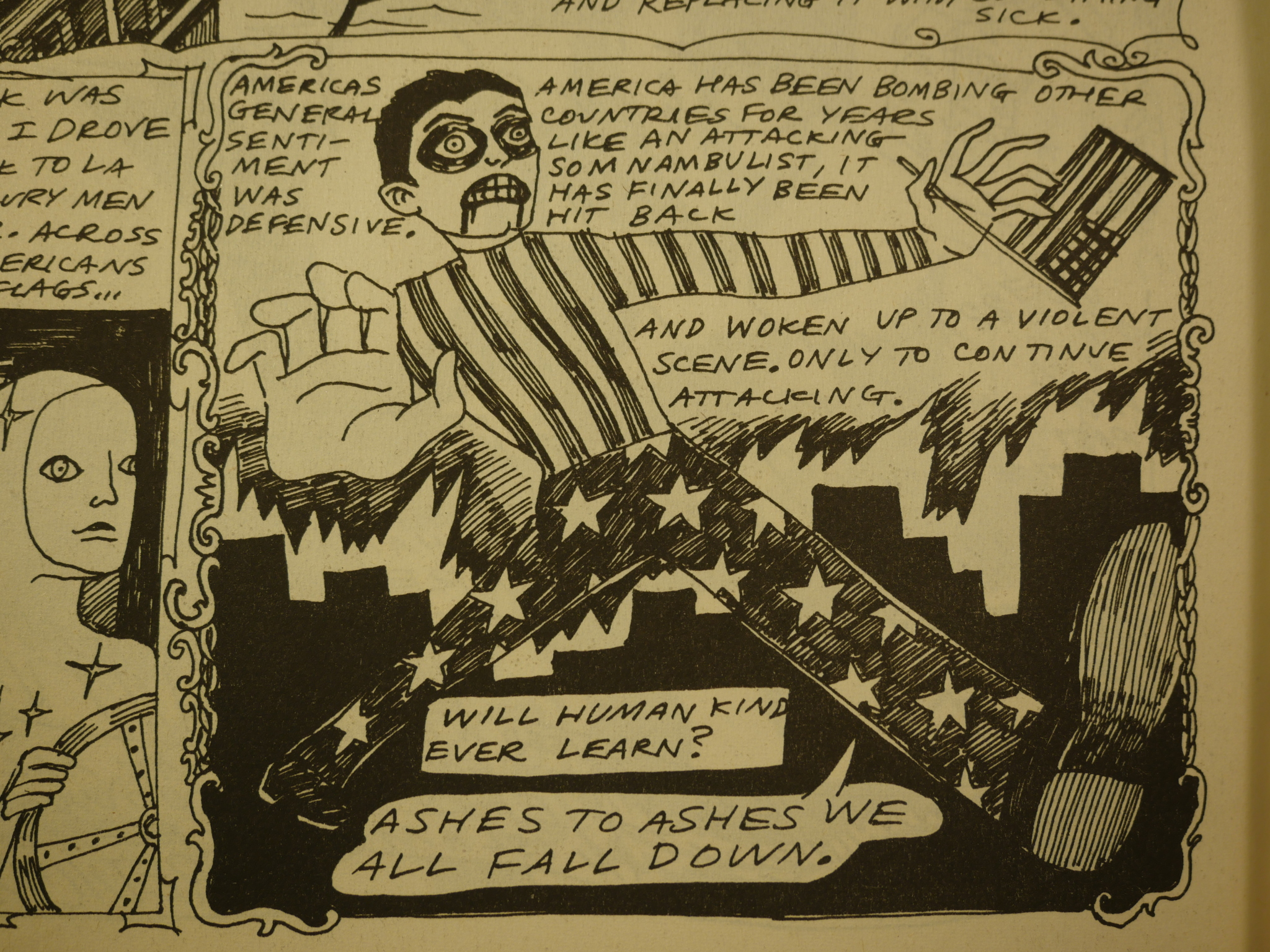 We’re now up to 2004, and issues are published on less than a yearly basis. The indicia stubbornly claims that it’s published “thrice yearly”, as it has from the start, and it’s never been true, I think.

Darcy’s artwork changes a bit during the last few years. While she’s previously been very consistent, she seems to be trying out other, less detailed art styles. 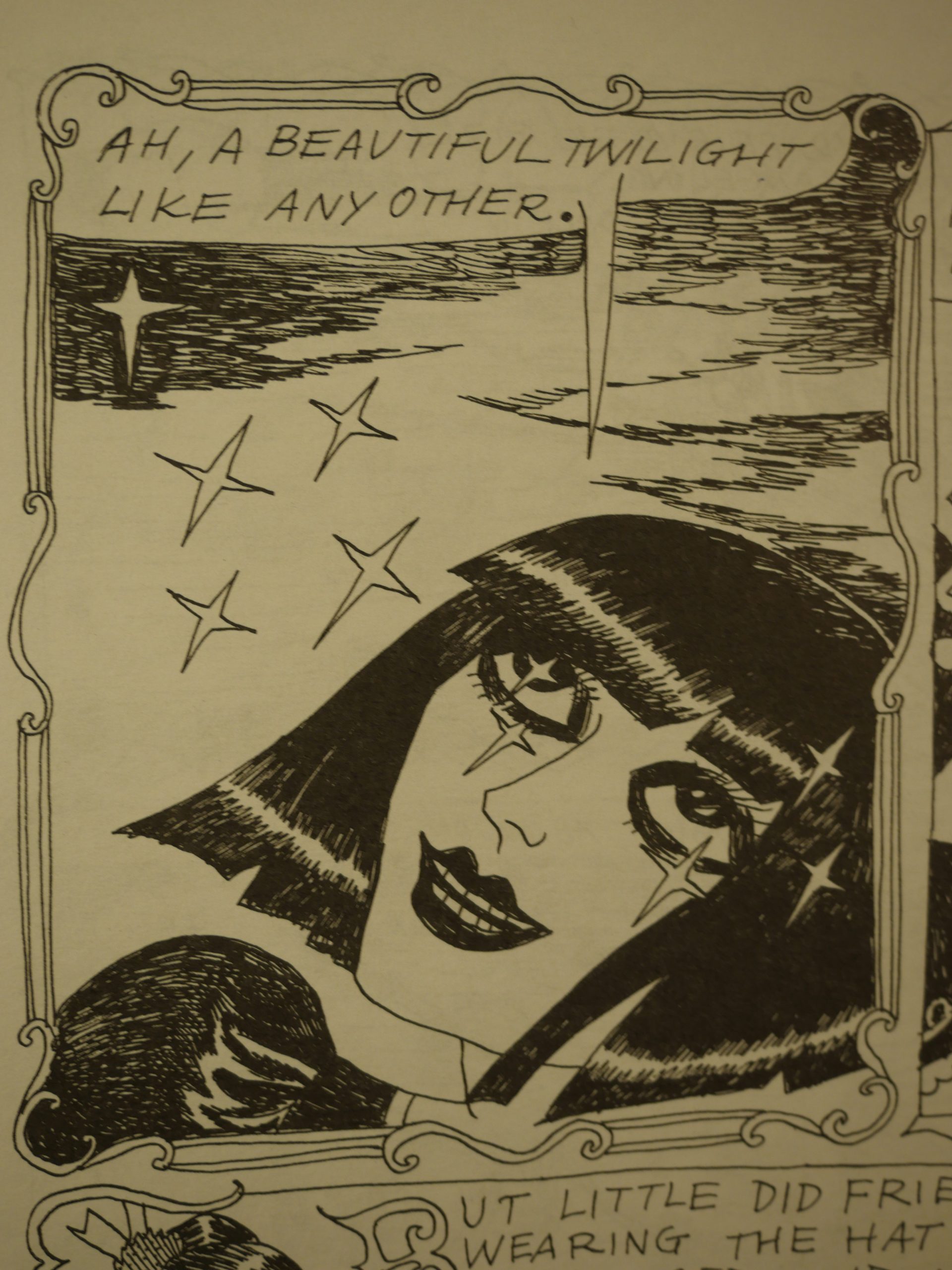 Fantagraphics switches over to thicker, white, luxurious paper for the last four issues. 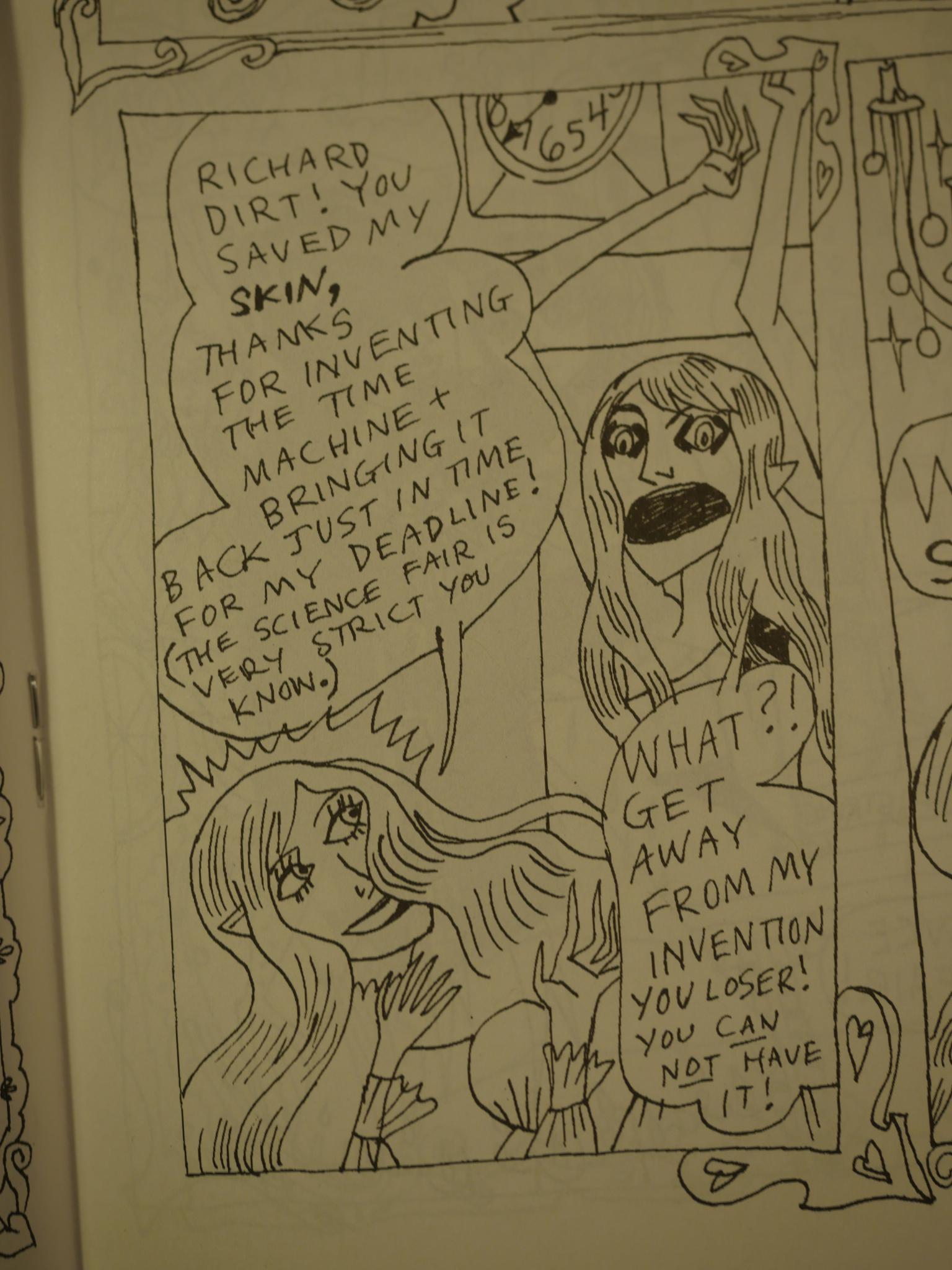 Darcy simplifies the frames around some of the panels quite radically. Is that where the band The xx took their name from? Probably!

Fantagraphics released a hardback collection of all this stuff under the name Meat Cake Bible earlier this year. The collective comics world response seemed to be “whaa? it cannot be!”, because the assumption seems to be that this work was so special that surely nobody outside comics-world would be able to get it.

It’s been reviewed all over the place, and everybody seems very positive about it. Sean T. Collins included it on his list of the best graphic novels of all time. (It’s a great list; all the books included are good.)

Which I think is like “duh”, because it’s a unique, amazing body of work, and anybody who buys it can also feel a bit of frisson at being quirky enough to “get it”.

Aargh! I used the forbidden word!

I also found this interview quite interesting.

Dame Darcy has a web site where you can keep up with all her projects.