(You and Your) Big Mouth #1-7 by Pat Moriarity and various. 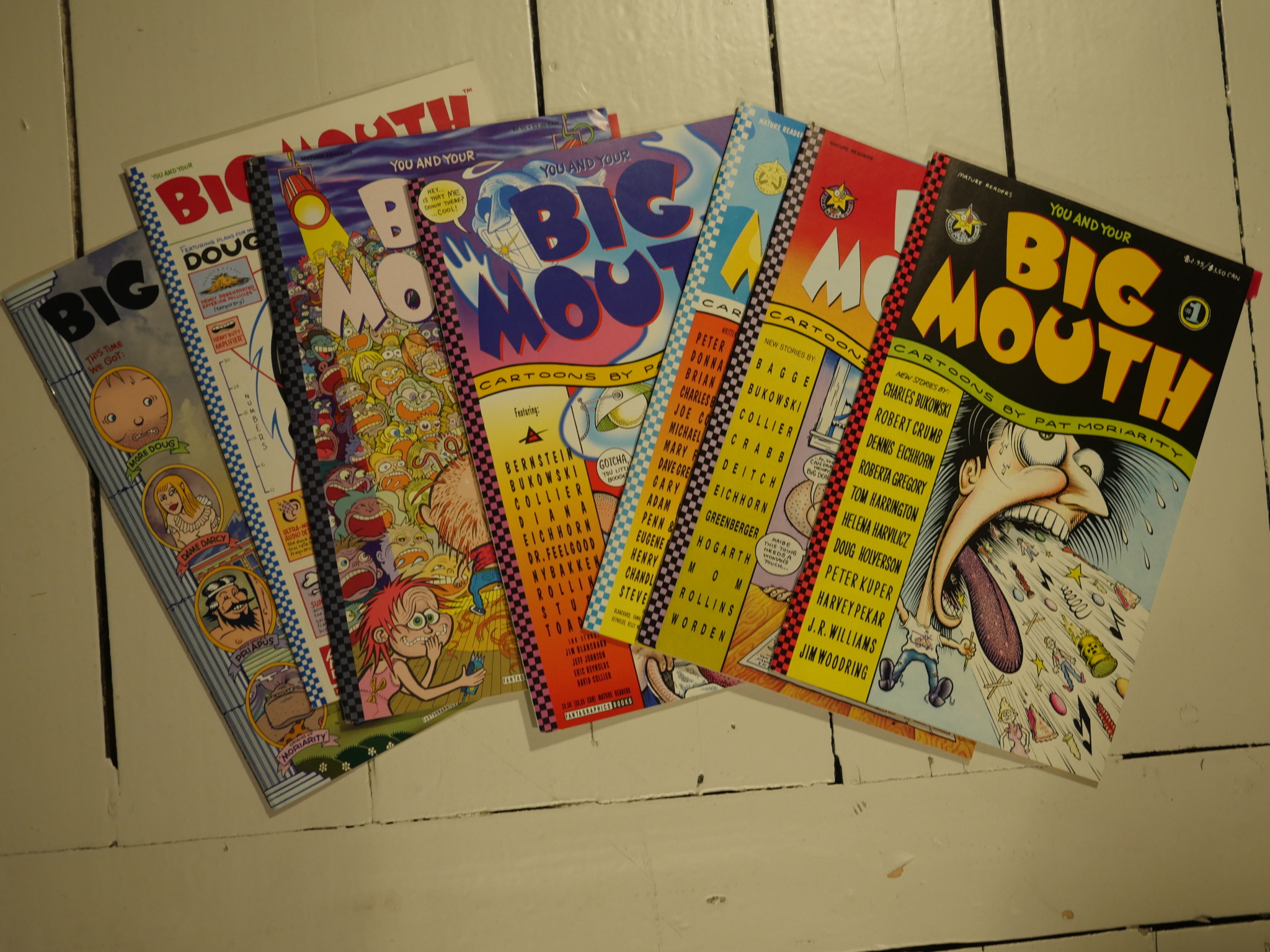 There are several series that feature a single writer and a wide cast of artists (Real Stuff, Duplex Planet Illustrated, American Splendor), but this is one of the very few series that has one single artist, and a wide roster of writers.

A comics artist spends so much more time on their bit than a comics writer does, so it’s easy to understand why this is such a rare business model.

The first two issues of Big Mouth were published by Starhead Comics, but I’ll just cover them here, anyway. 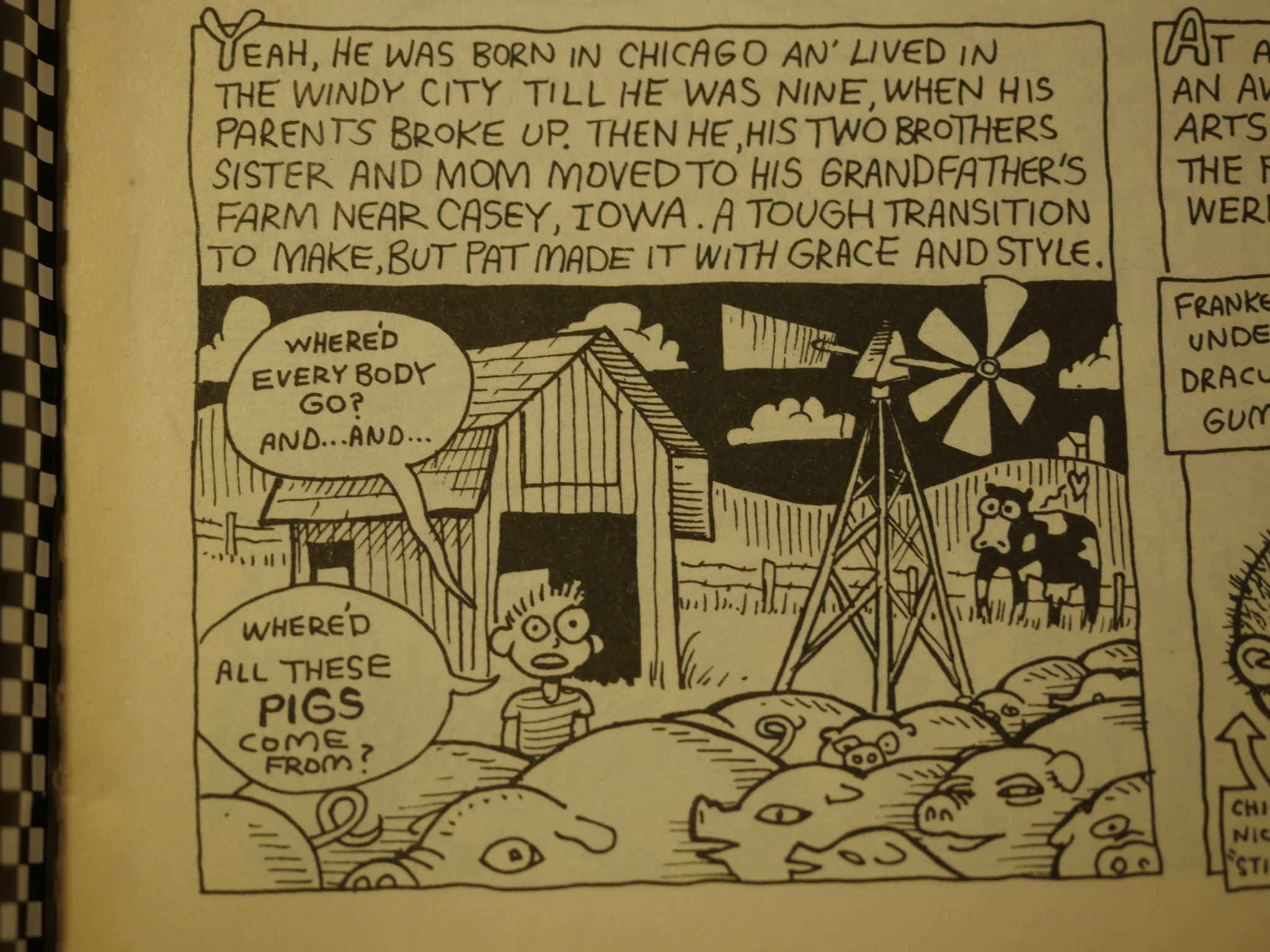 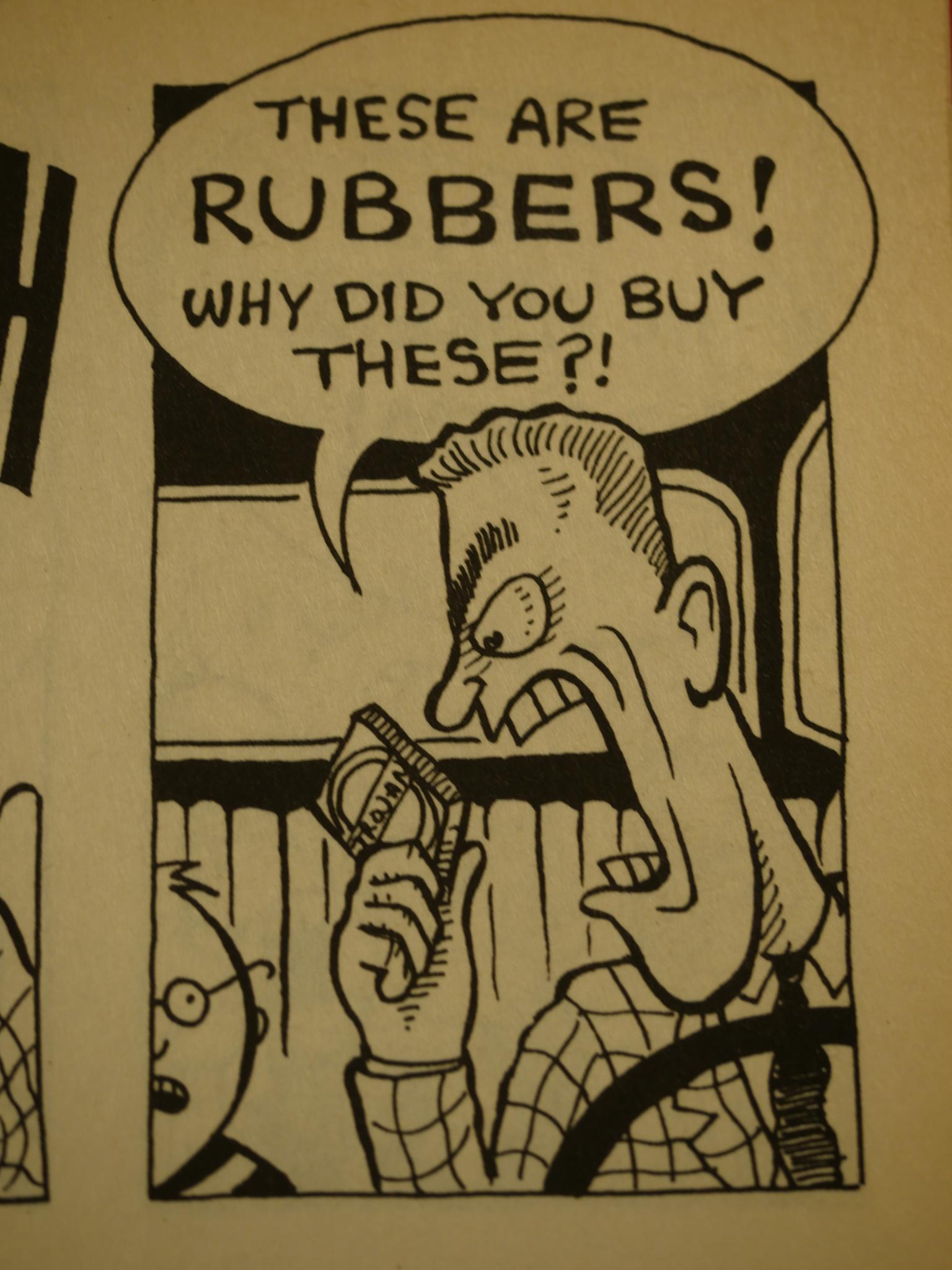 And speaking of Real Stuff, there’s a story written by Dennis Eichhorn.

And, as you can see, Moriarity varies his art style quite a bit from piece to piece. 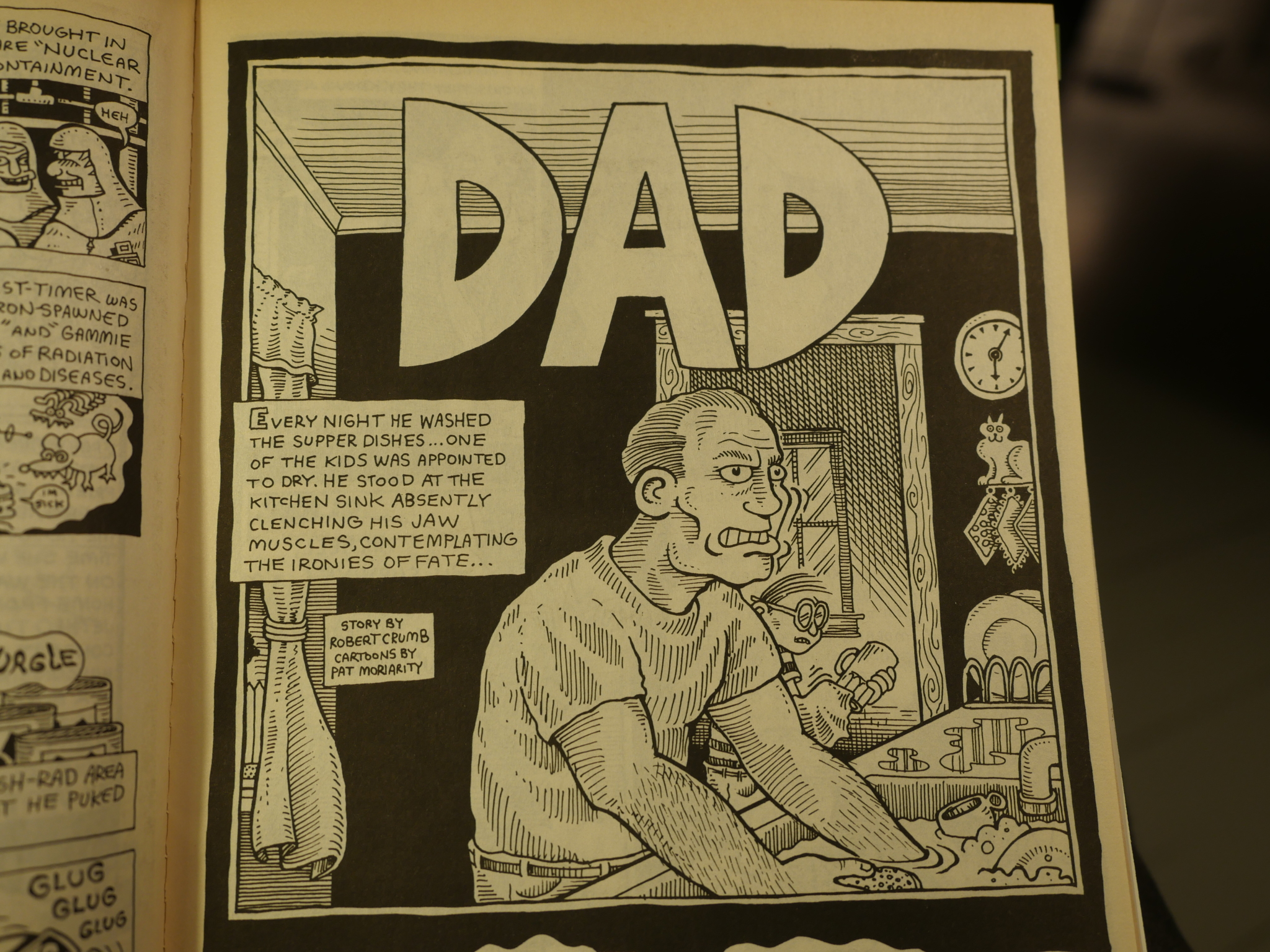 The stories are virtually all autobiographical (on the part of the writer, of course). The one by Robert Crumb about his father is rather scary: I’ve never seen Crumb do something like this before. Perhaps he does actually censor himself quite a bit when he’s drawing this stuff himself?

One strange thing about reading these comics is how jarring it is with those different “I”s in every story. I found myself thinking for a millisecond “hang on, how did…” before “oh, yeah, different writers, same artist, not the other way around” quite often. 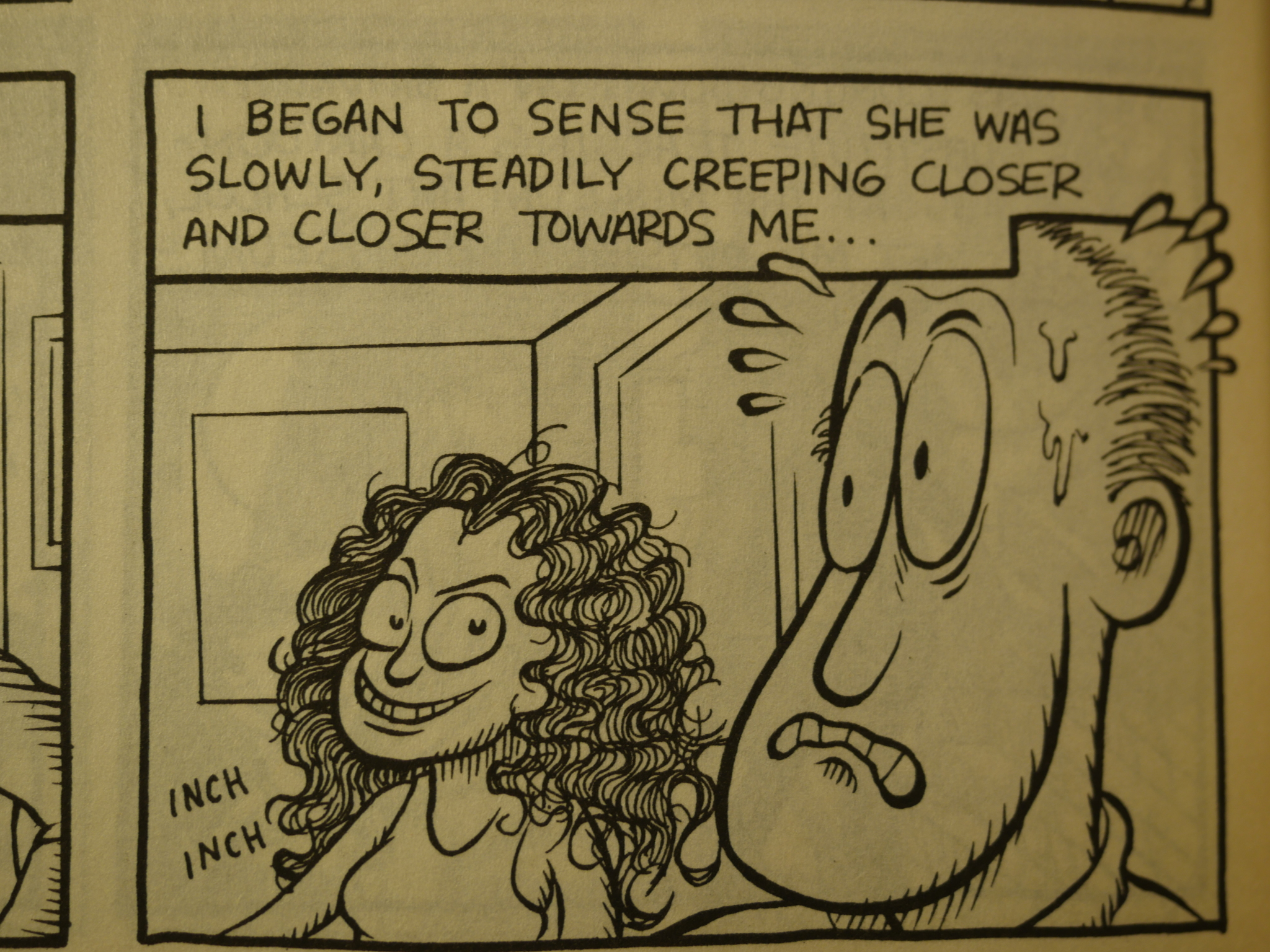 There’s a distinct inside baseball feeling to the first few issues. More than a few the stories are written by people either working for Fantagraphics, or are about people who are working at Fantagraphics, or both. Here we have a story written by J R Williams about meeting Helena Harvilicz, an editor at The Comics Journal. (Things were tense.) 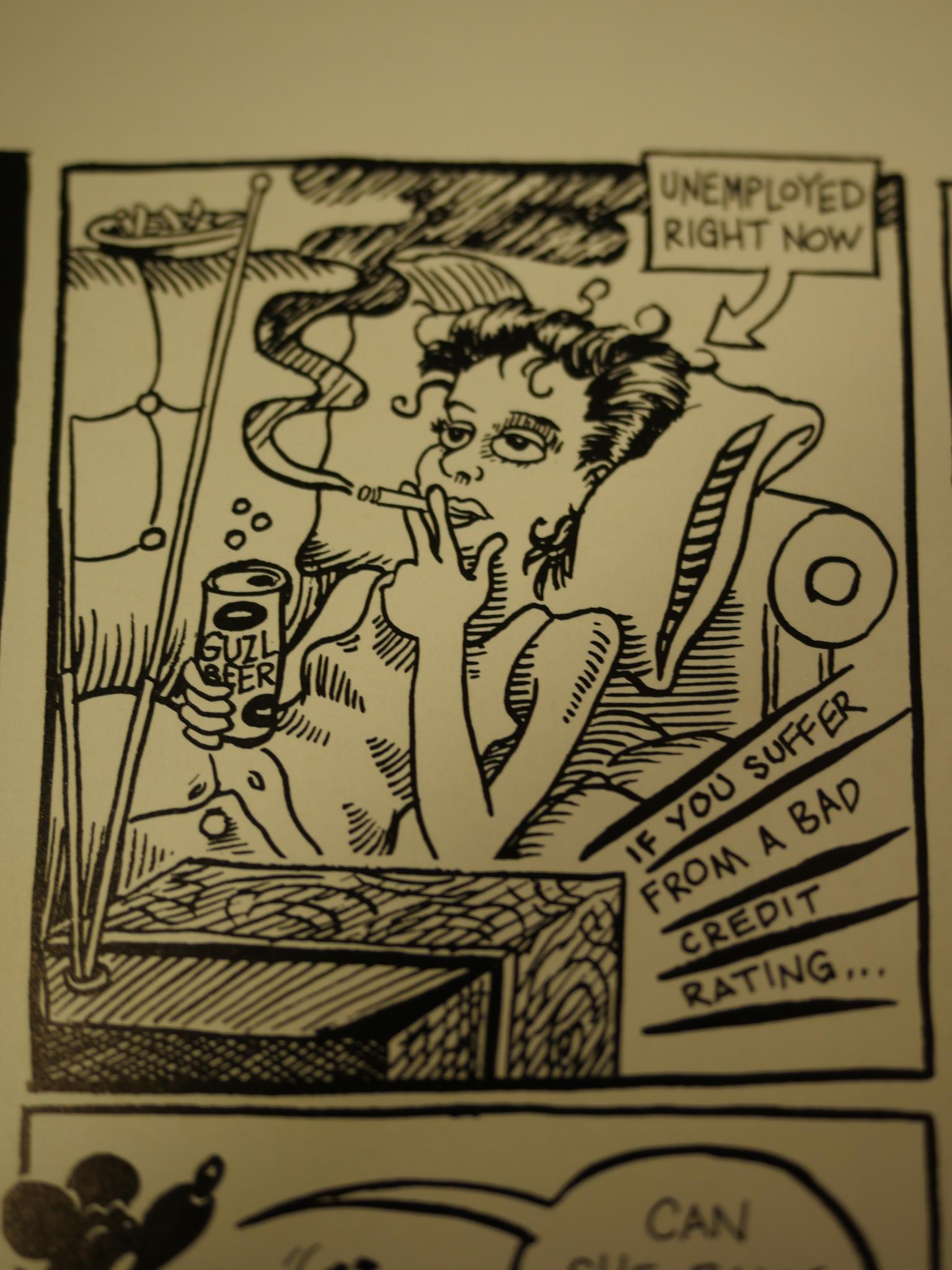 Then the next piece is written by her. Disappointingly enough, it’s not about meeting J R Williams. 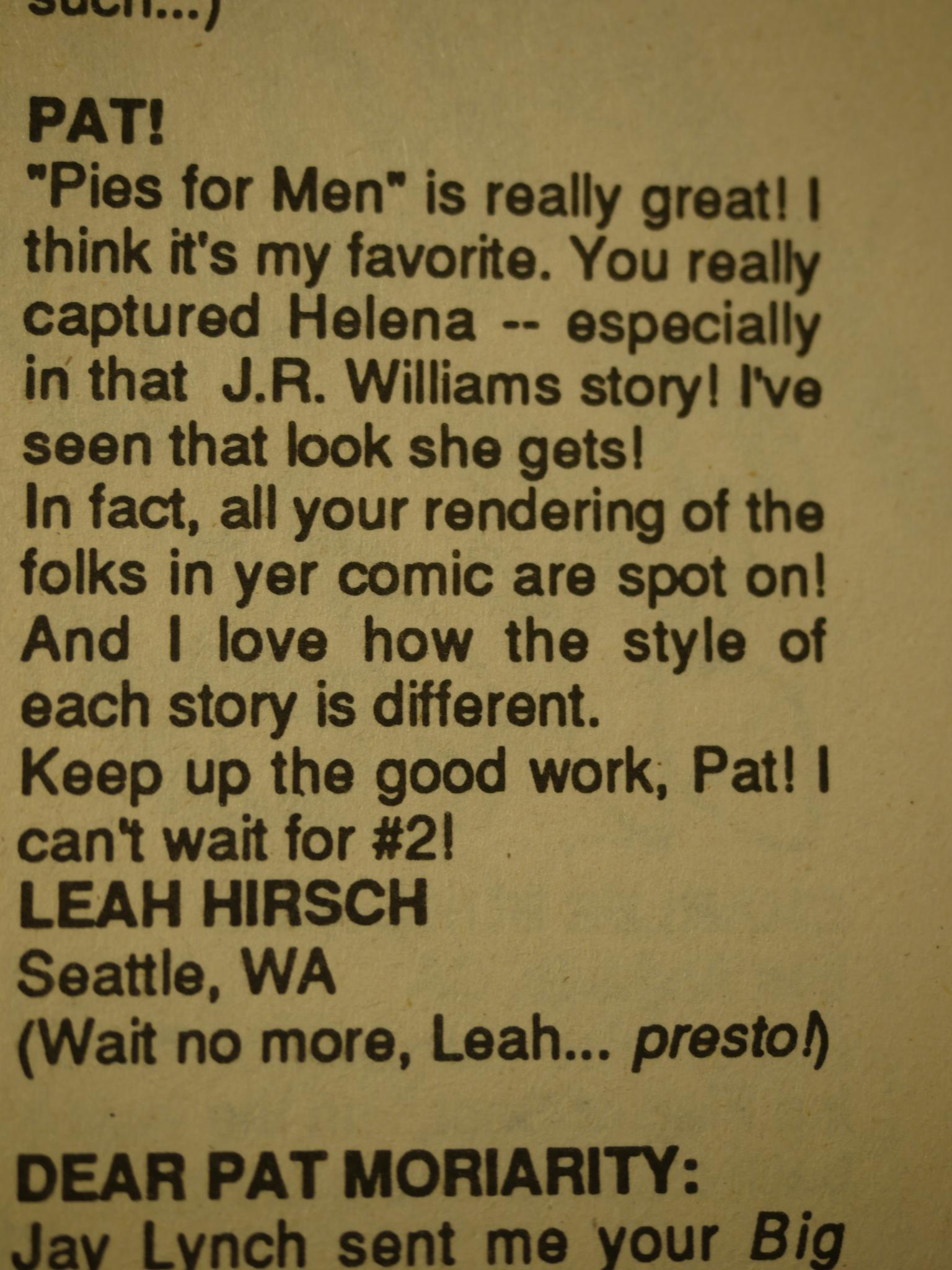 Then you have the letter’s column repeating the cycle… 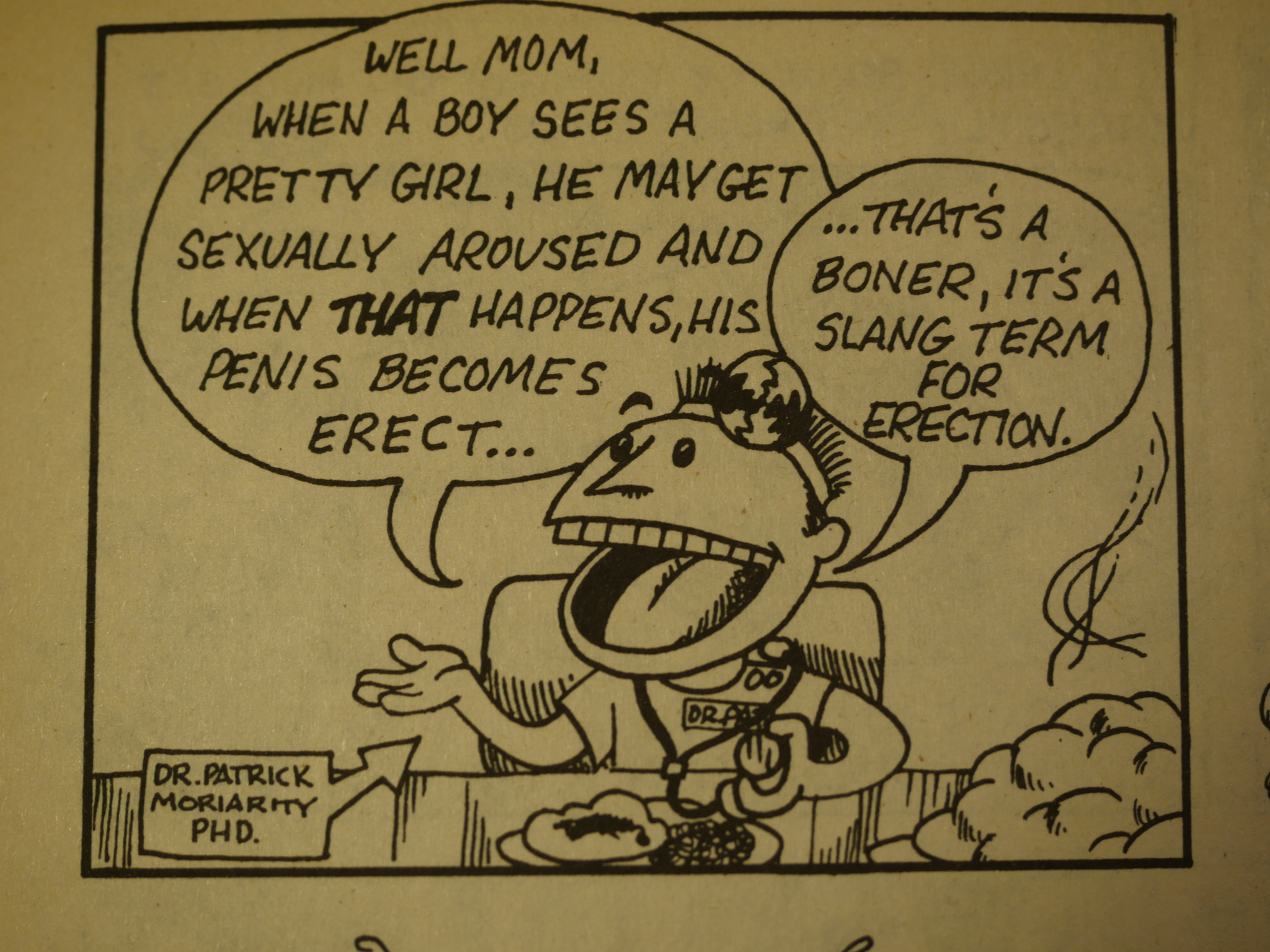 A story written by Karen Moriarity, who I take to be Pat Moriarity’s mother (by reason of deduction of the story itself). It’s cute. 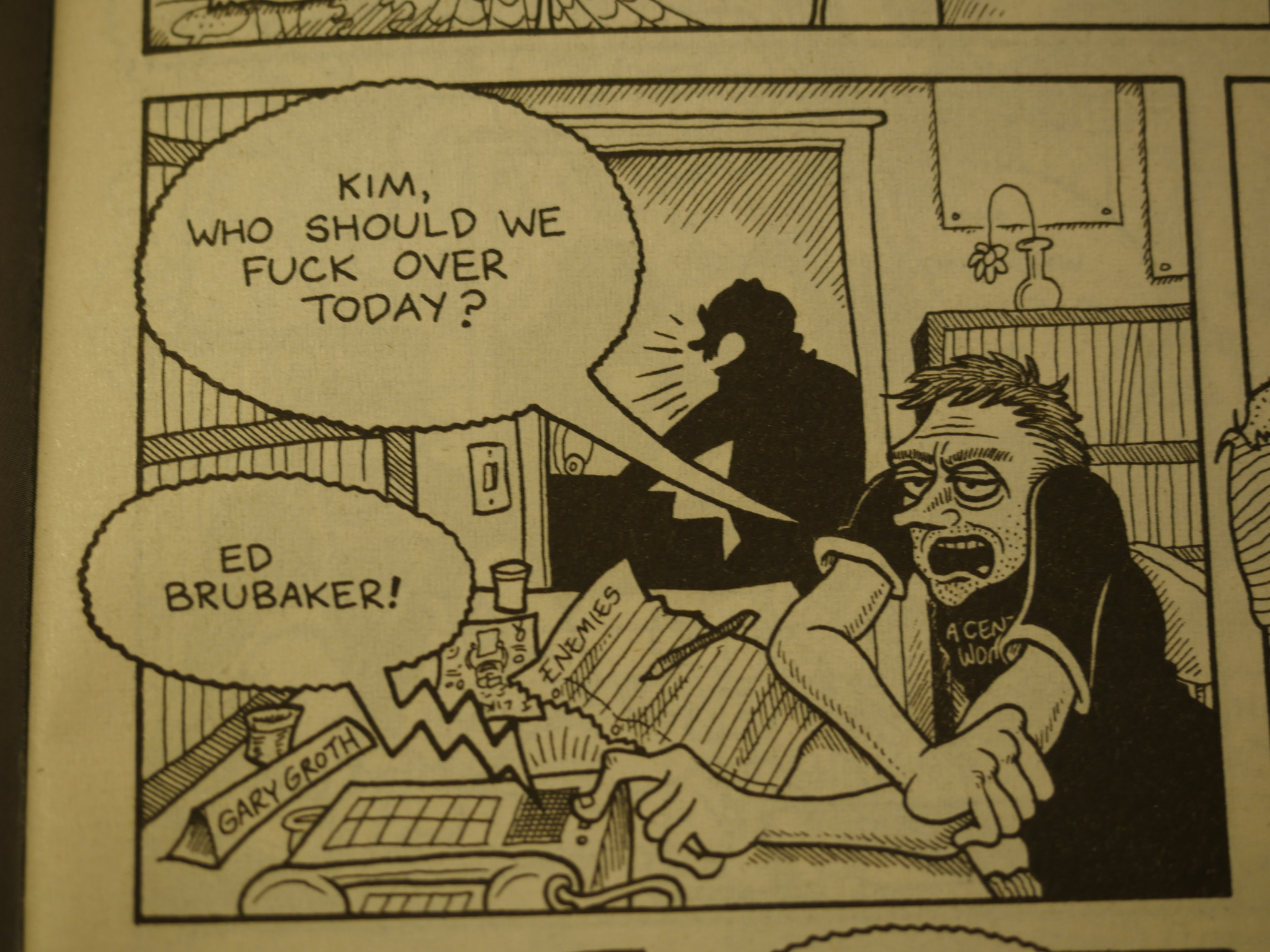 Gary Groth writes a totally true story from a working day at Fantagraphics. 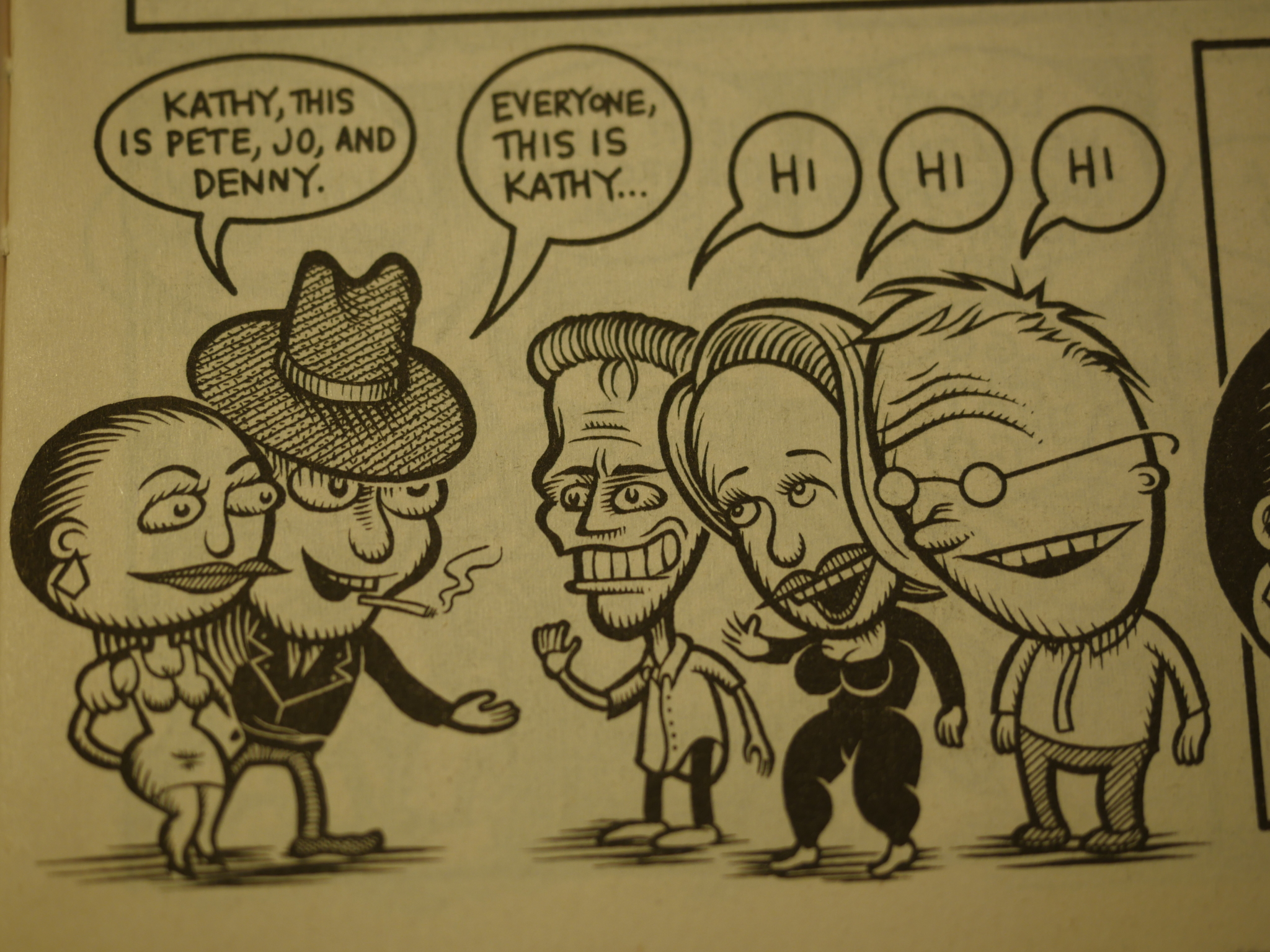 That’s JR Williams, Peter Bagge, Joanne Bagge and Dennis Eichhorn. I feel slightly ashamed that I can tell who these people are.

Moriarity was working as art director for Fantagraphics at the time, so it’s no wonder that he’s hanging around with these people. But quite a few of these stories feel very throw-away. Amusing, but there like no point to them? Henry Rollins sends in a submission (probably), and Moriarity illustrates it by imagining how Rollins would look telling the story, instead of illustrating the story itself. 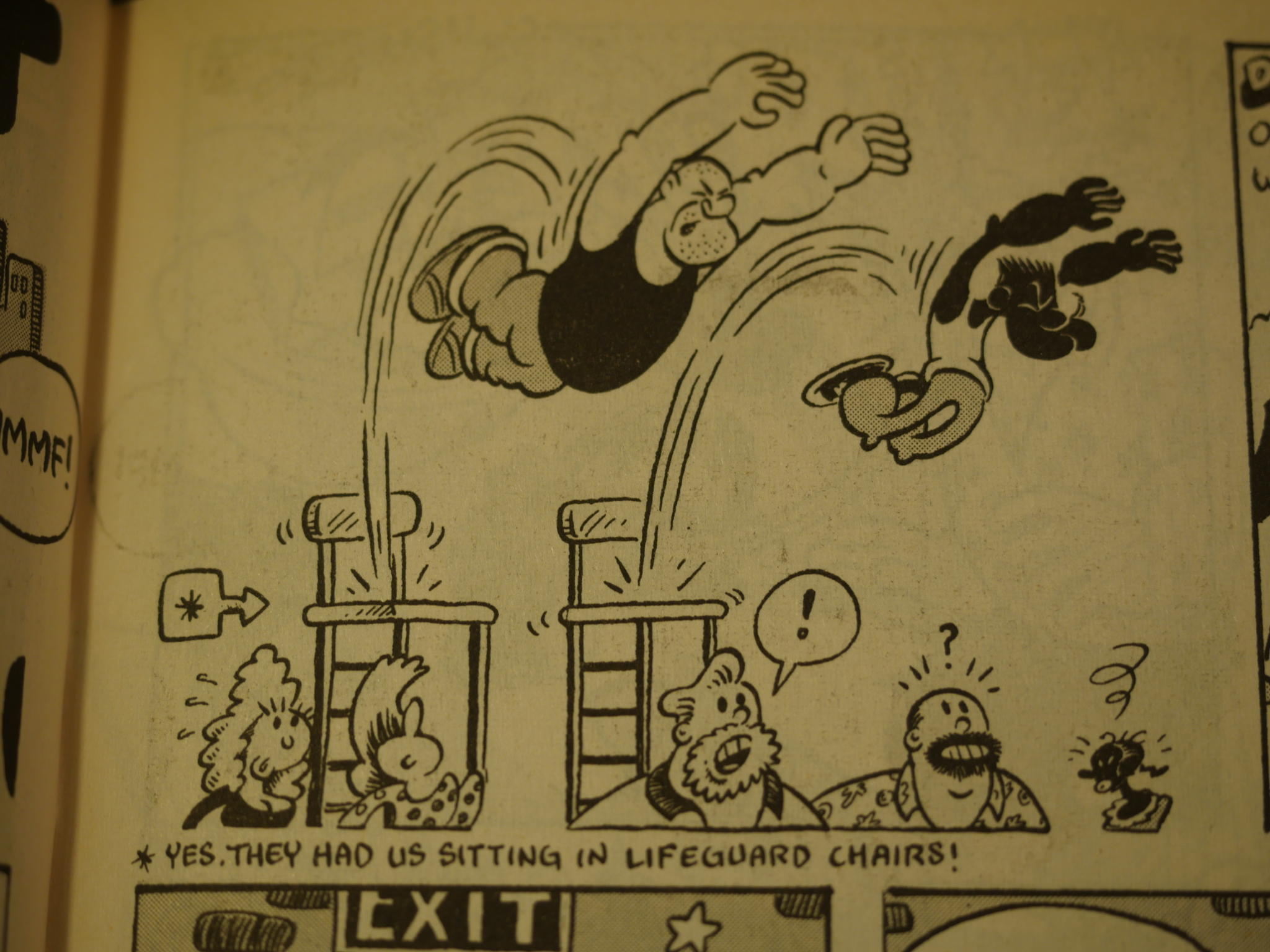 Eugene Robinson writes a story that Moriarity illustrates like EC Segar. Oh, I’ve neglected to mention that Moriarity uses a variety of different inkers, which might explain some of the radical stylistic differences. This one is inked by “RL Flenky III”, which I take to mean RL Crabb. 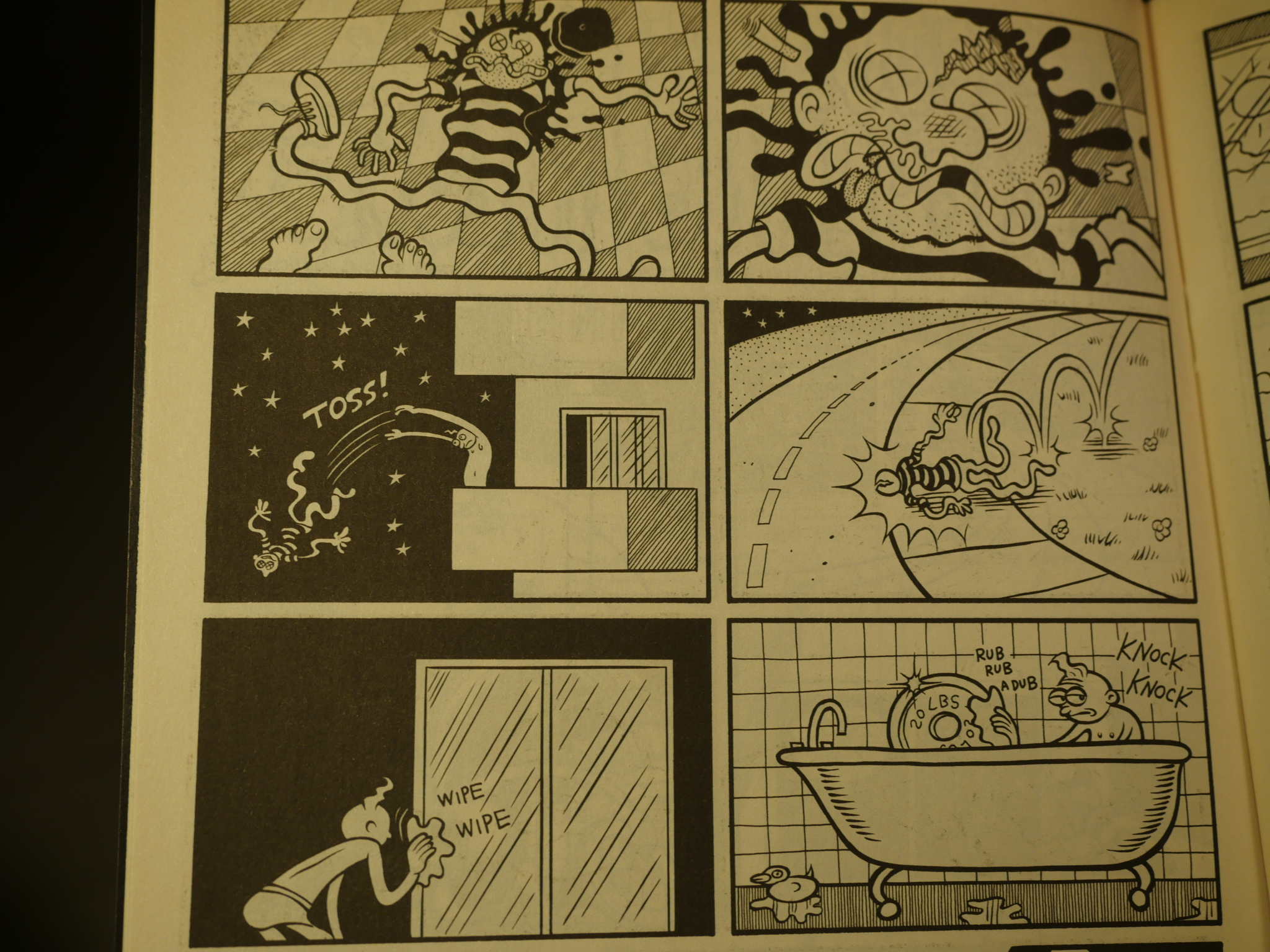 In the fourth issue, Moriarity finally really illustrates a Henry Rollins story after just depicting Rollins ranting at the camera for two issues. 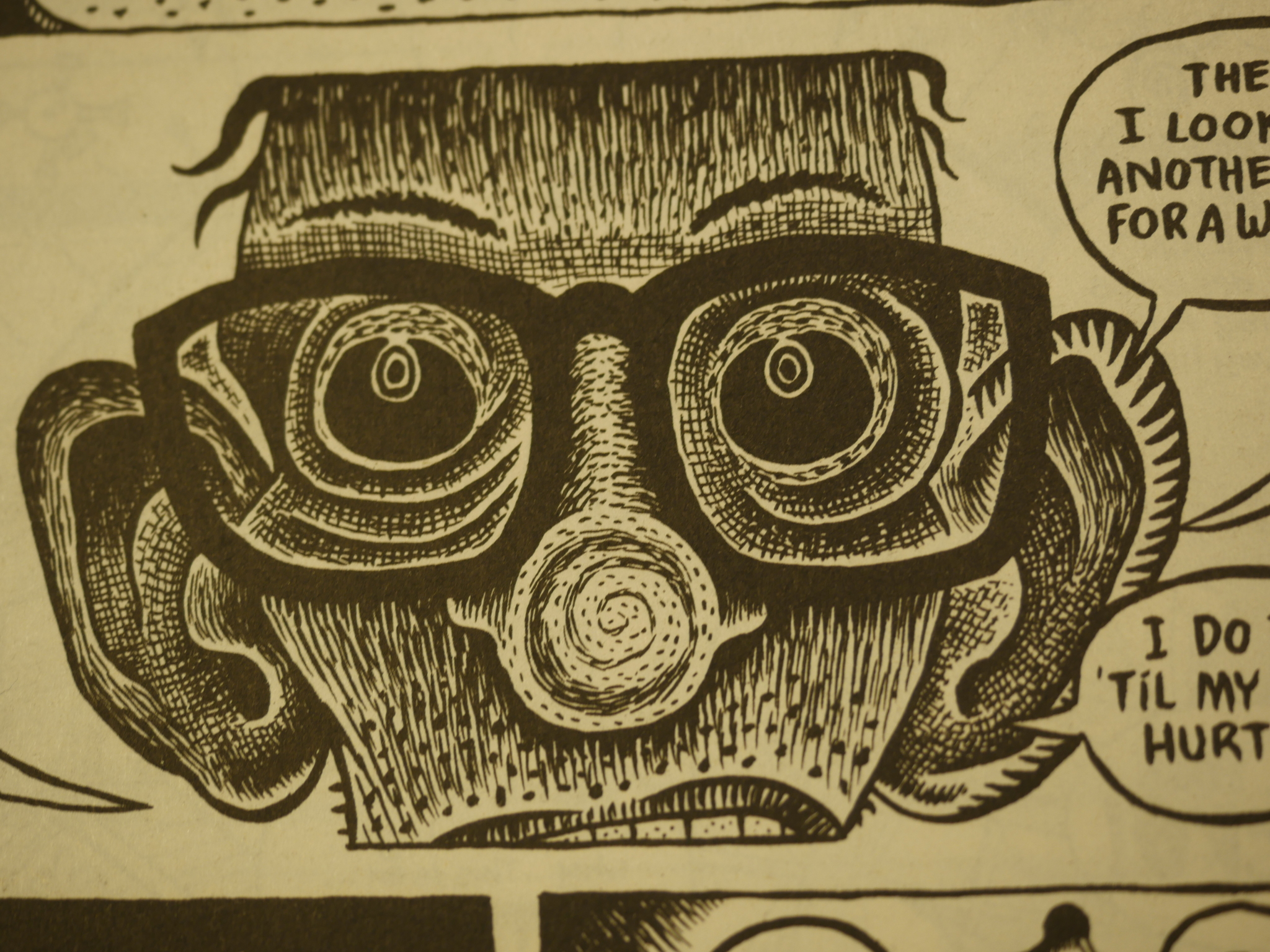 Oops. That’s kinda what I thought, too, and Moriarity agrees. Double oops. Now I feel bad for writing what I did up there. But I made those notes before I read this page! Honest! I wasn’t cribbing! There’s a one year hiatus between the self-criticism of issue four and the fifth issue, and that issue is very different from the preceding issues. First of all, it has one long story that takes almost all the pages of the issue, but more importantly, that story is written by Moriarity himself. And it’s about a character called “Doug”, who I would guess really is the author himself. But there’s also a couple of shorter pieces, like this one written by Kim Thompson, about a horrible nightmare. Another year passes before the sixth, which continues the same format, but this time with an even longer Doug story that is to be continued in the seventh issue.

Above you see how the continuation in the seventh issue ends.  And it took two years to get this issue out, so everything points to Moriarity losing interest or getting a job that leaves less free time to draw, or something.

There are no hints in the last issue that the series is about to be cancelled, but it feels like that anyway. There’s a certain lack of energy pervading the book.

Moriarity is still active, but seems like he’s doing more illustration than comics these days.