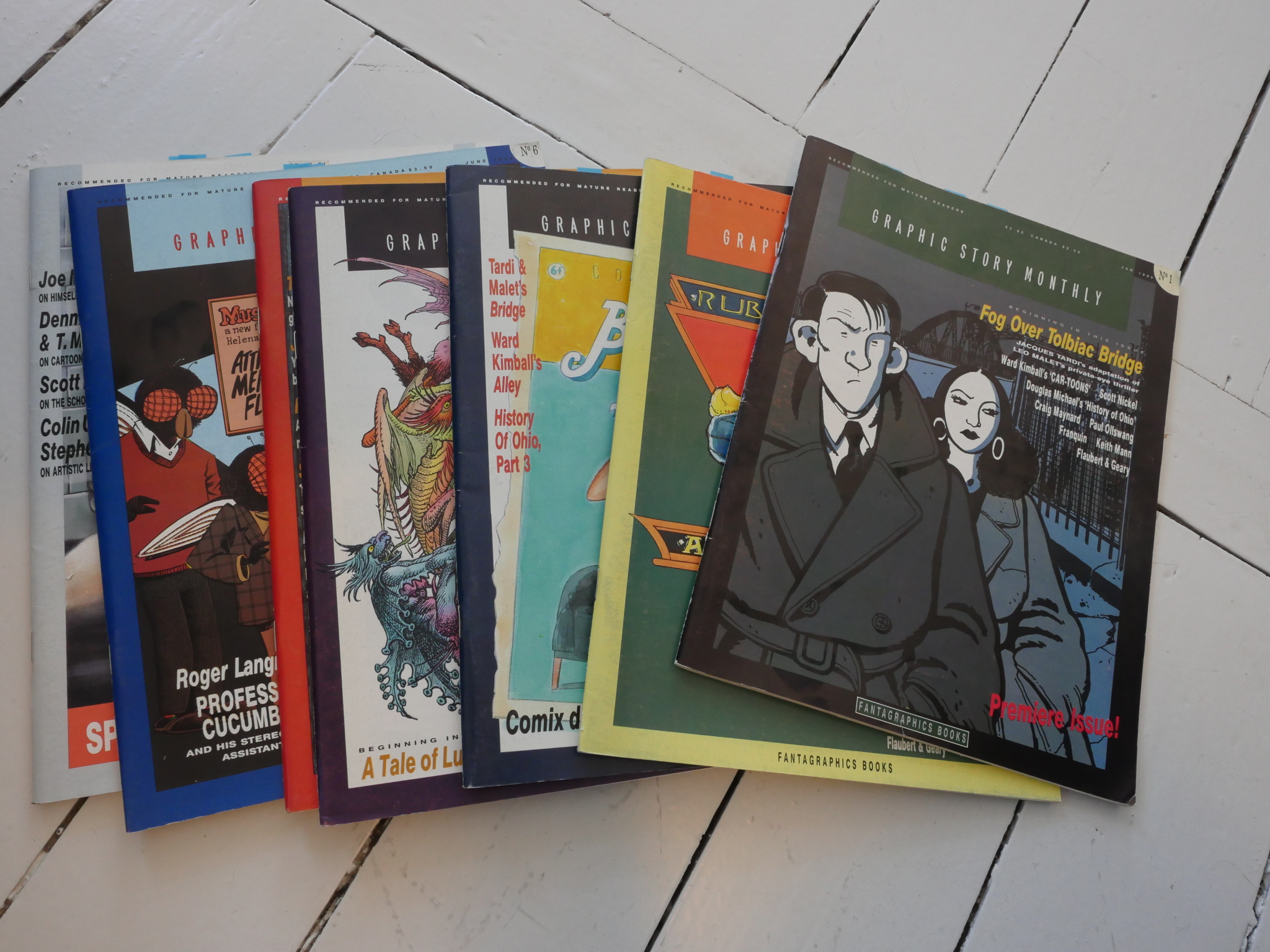 Graphic Story Monthly was Fantagraphics’ second attempt at a “general” comics anthology, following hot on the heels of Prime Cuts.

In some ways, it’s just a continuation of that series under a new name. Many of the same contributors and features continue on from the first series, so I guess the point was just to have a new number 1 to boost sales or something? 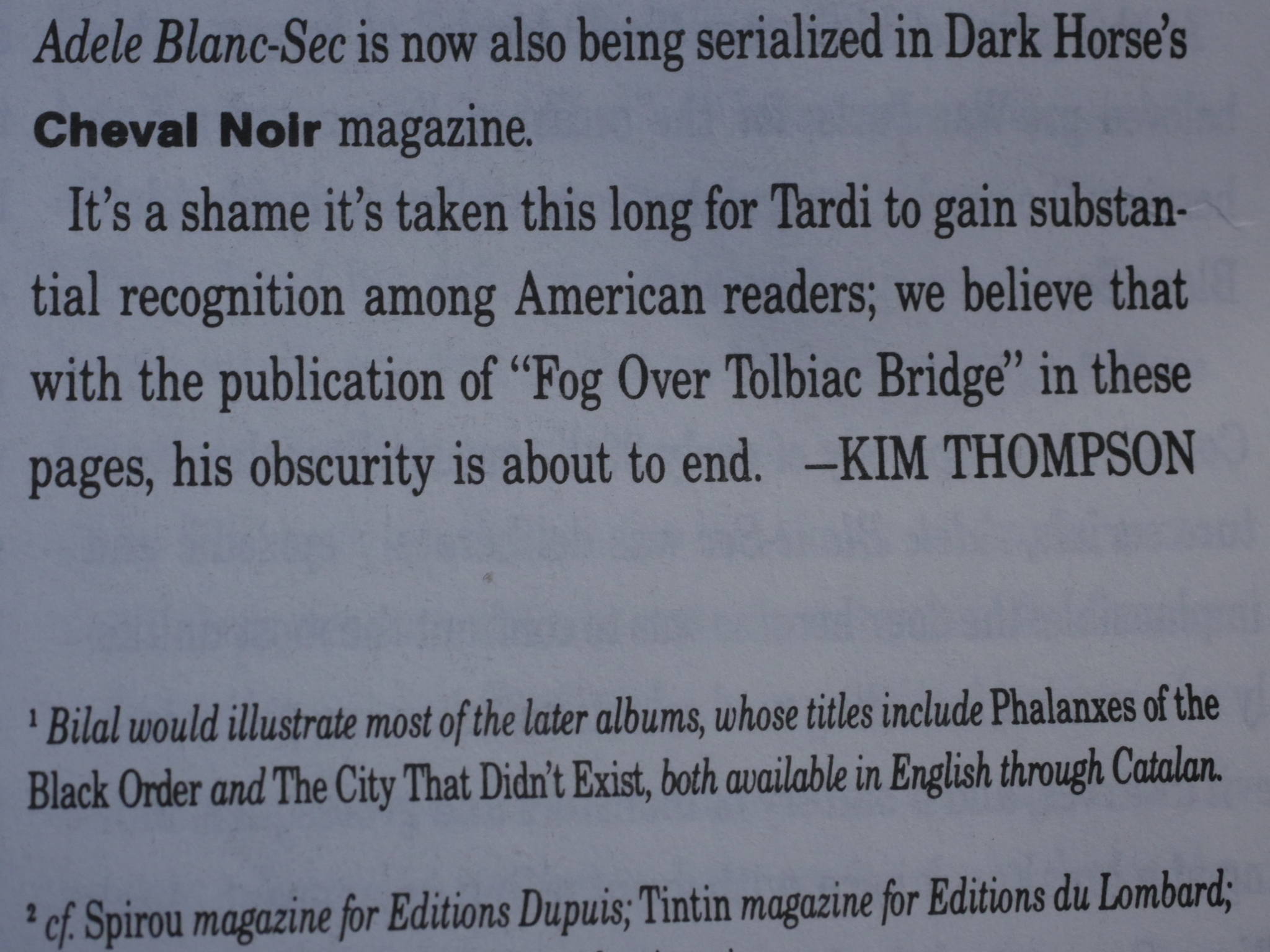 This is January 1990, and it would take a couple more decades for Tardi to get a substantial part of his work translated into English, unfortunately. Anyway, just like in Prime Cuts, Kim Thompson writes introductions to the translated material… 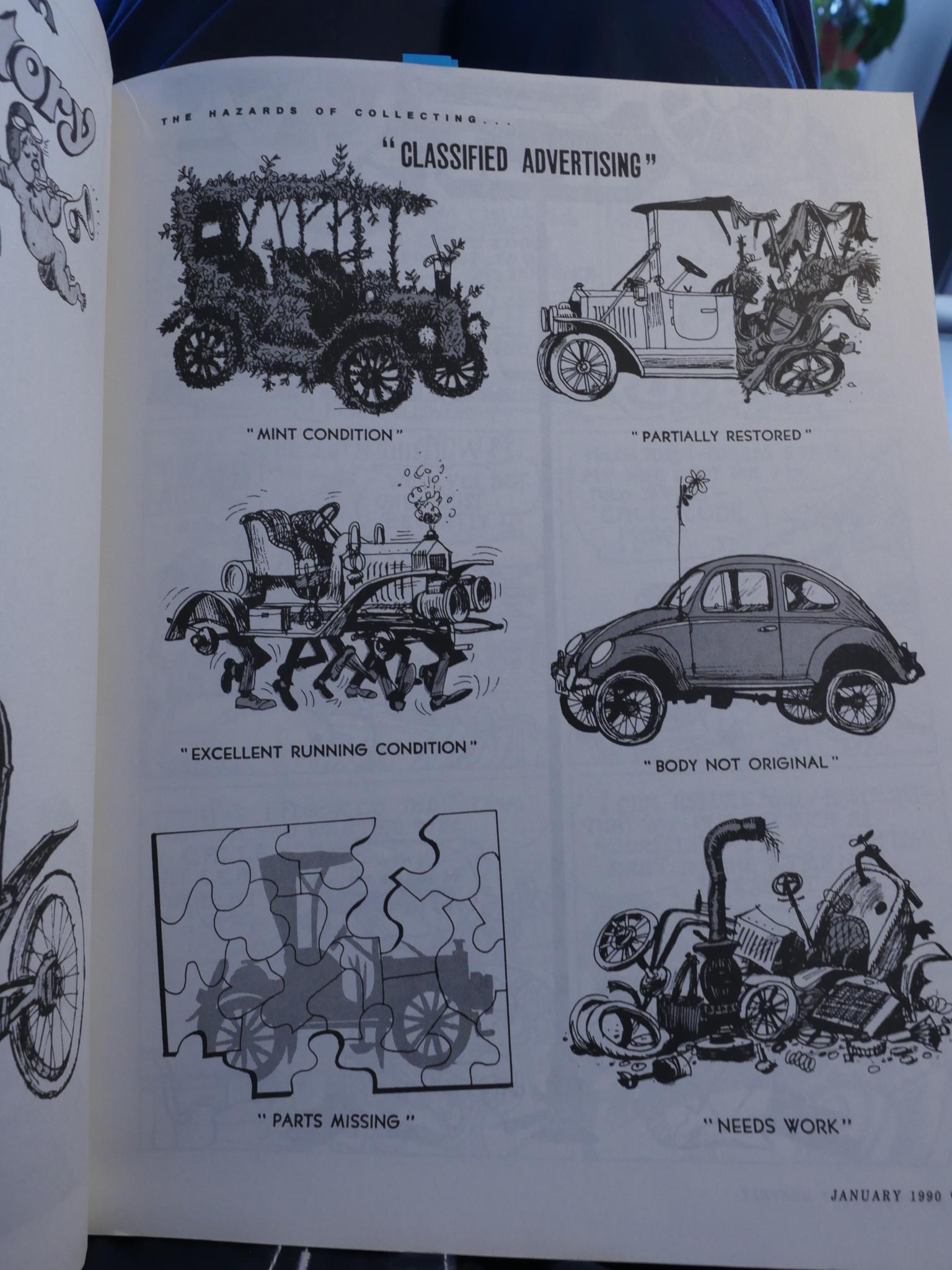 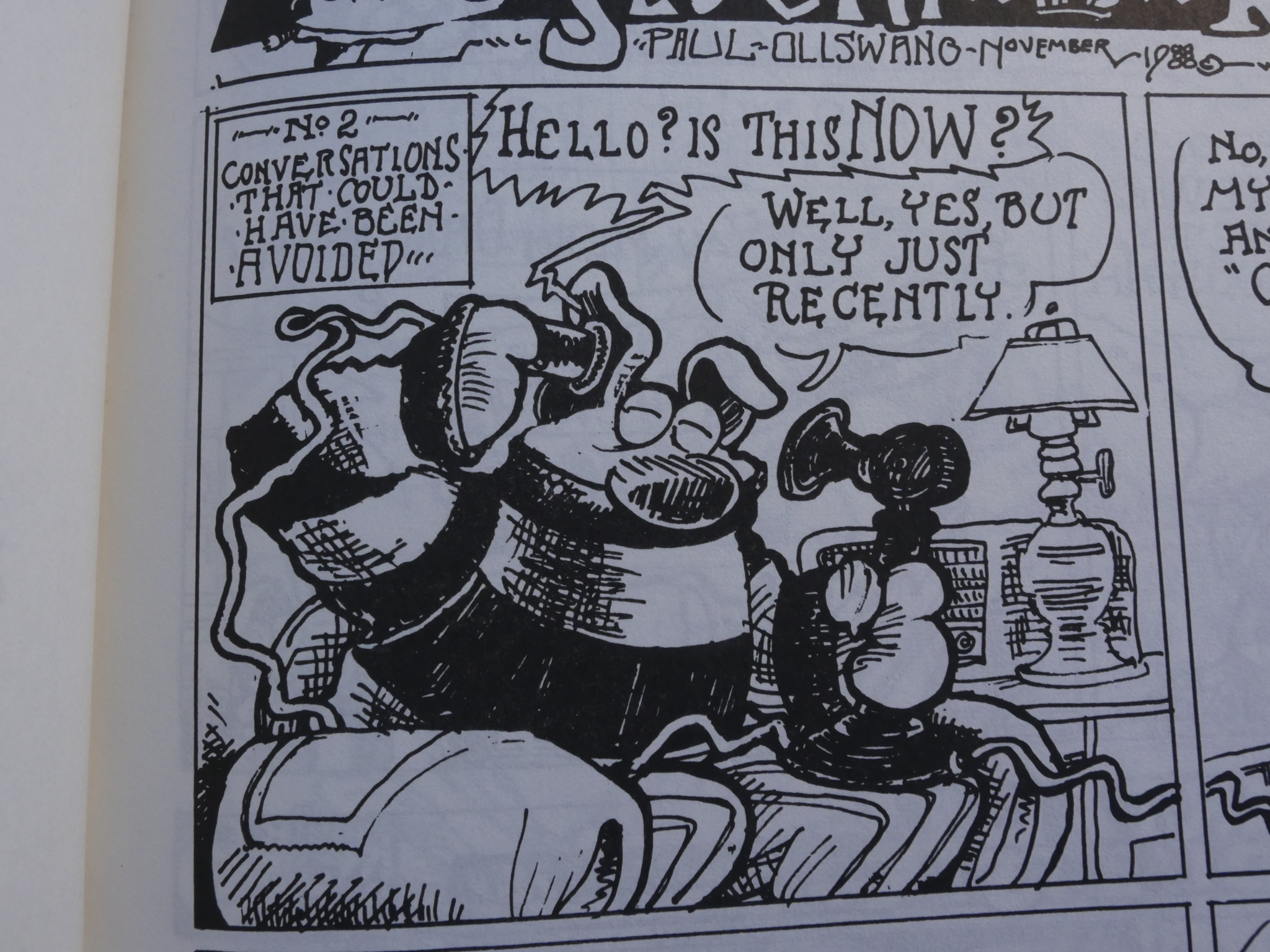 … and there’s newer, funnier stuff (like this Paul Ollswang/Jim Carpenter groan-worthy, but beautifully drawn work here). All in all, it’s a pretty good package. While Prime Cuts felt slap dash at the end, some new enthusiasm seems apparent in Graphic Story Monthly. 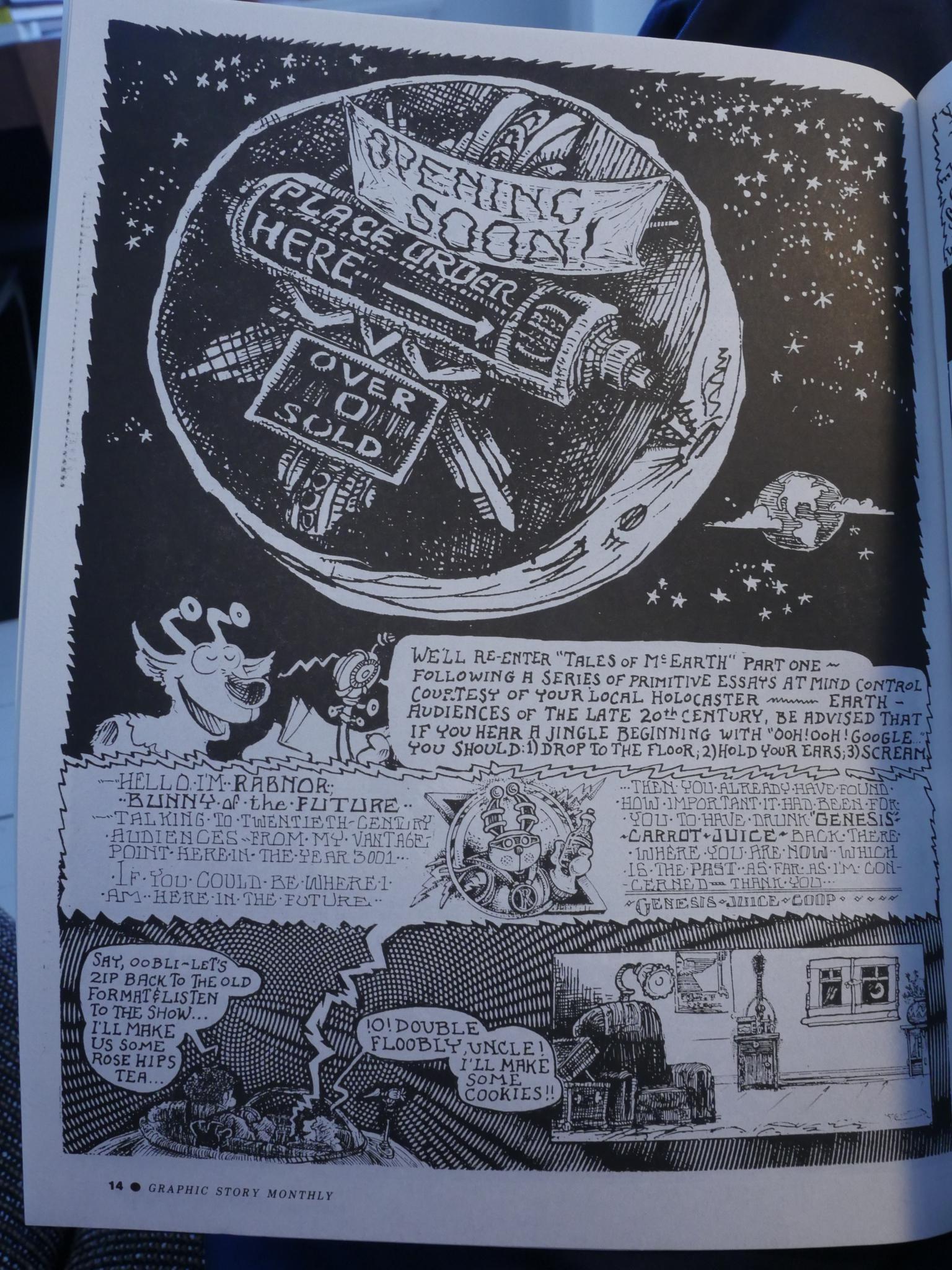 Speaking of Ollswang, he goes all weird in the second issue. It’s a very strange piece, but oddly and abstractly amusing. 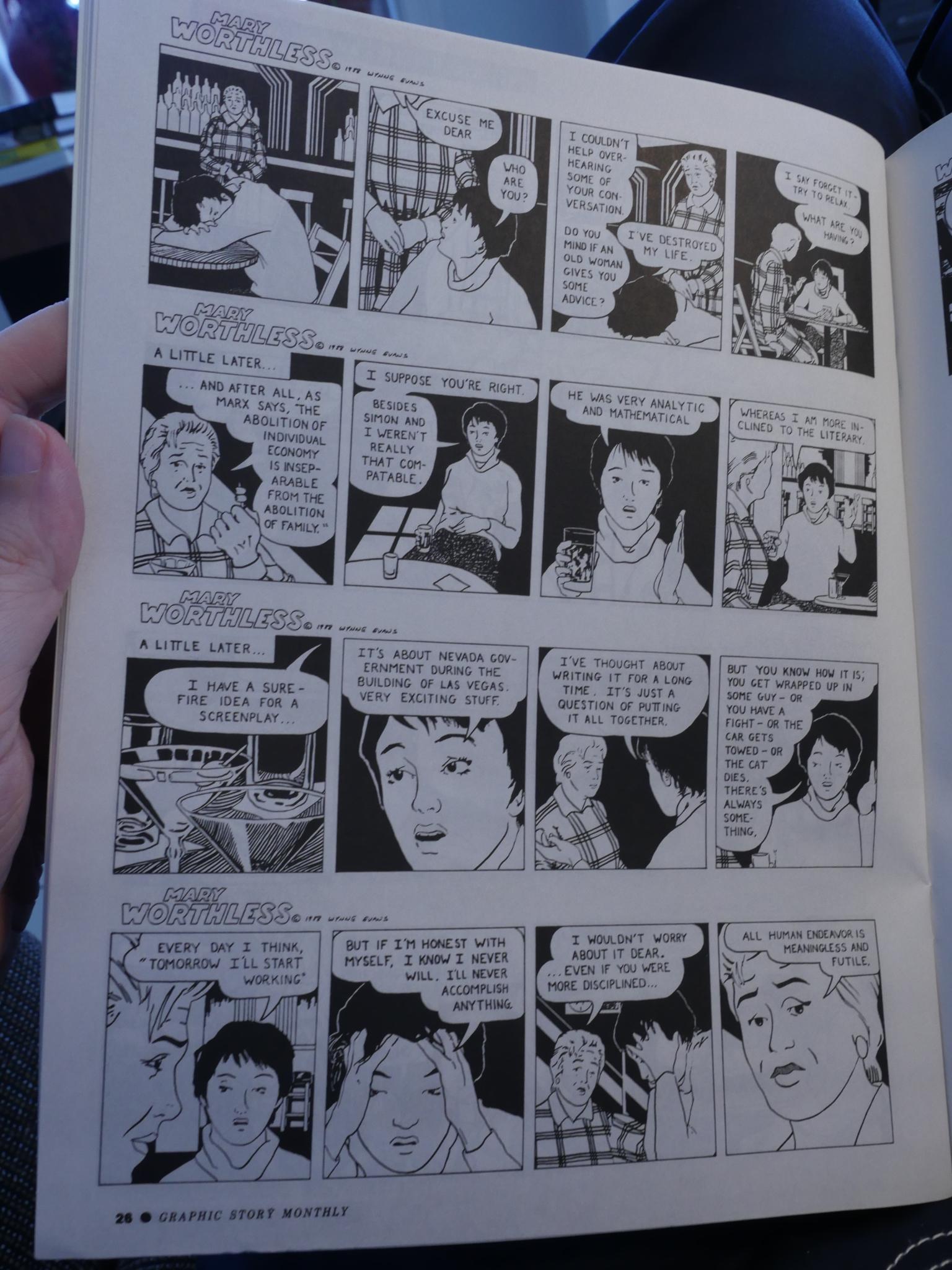 More to the point is Wynne Evans’ “Mary Worthless” story. I mean, it’s a parody, but it works on its own, too. The artwork’s pretty basic, though. 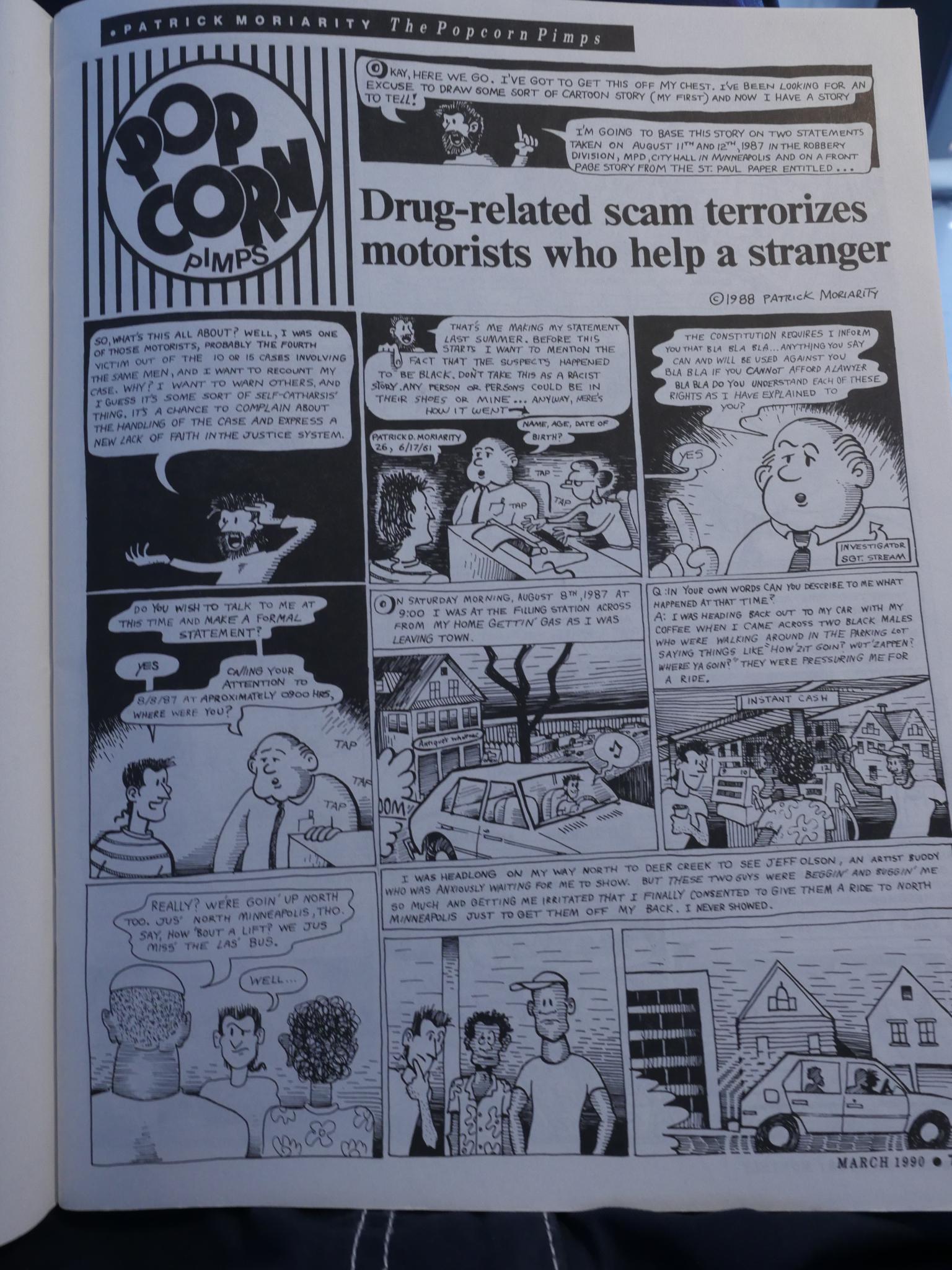 Perhaps the most notable work in issue three is Patrick Moriarty’s very first comic. It details Moriarty’s harrowing sorta-kidnapping and the less than stellar response by the police. But Moriarty’s lack of experience in telling a compelling story is pretty easily evident: While the facts presented are hair-raising, the strip itself isn’t really that emotionally engaging. And his artwork at this stage hasn’t really found it’s style. I’ll be doing his solo series later, and I remember that as being a lot better than this… 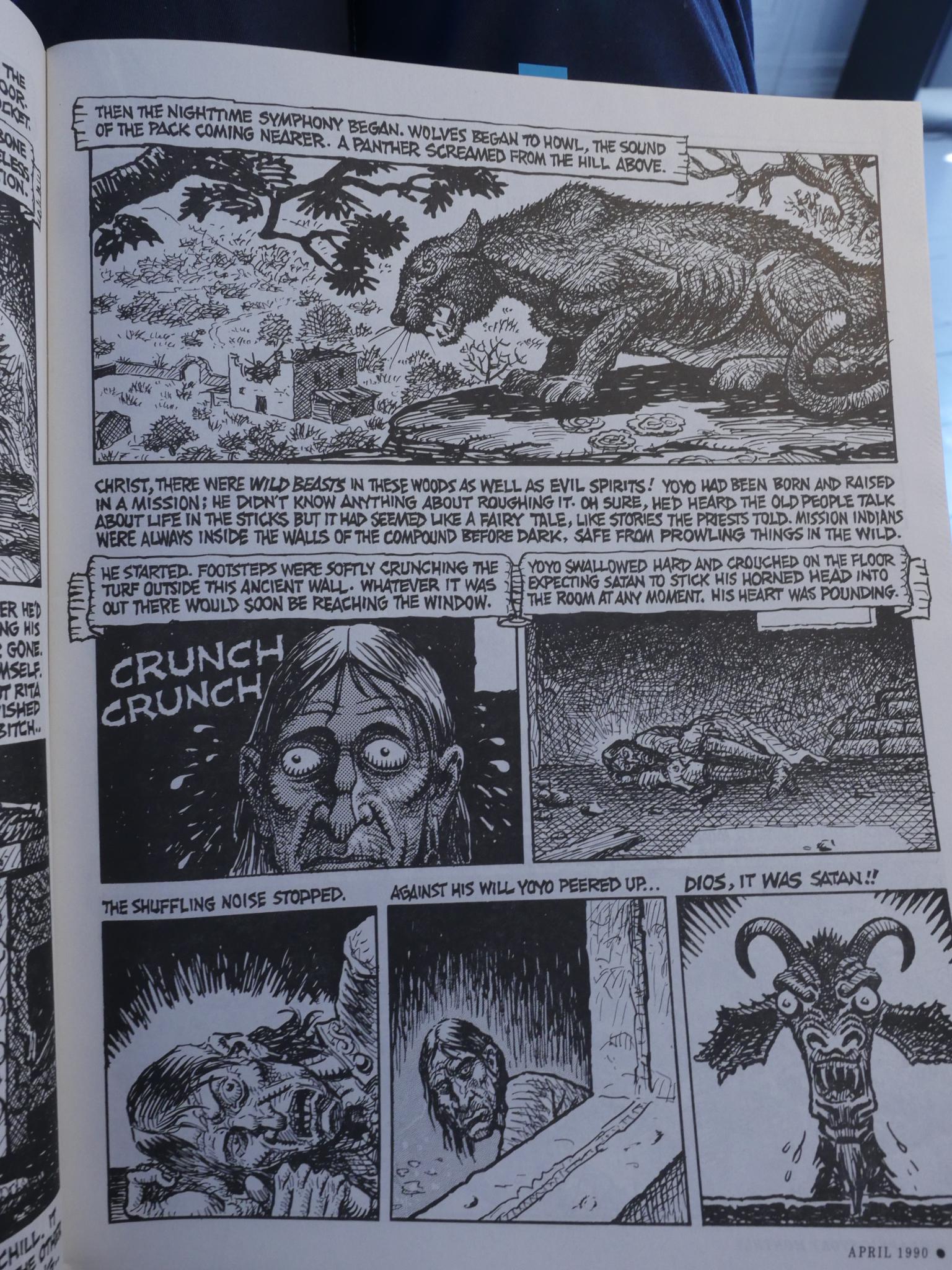 Issue four starts a new serial by Jack Jackson, who is a real underground comix veteran. (He published one of the earliest underground comix back in the 60s.) The serial is in his usual milieu, but it manages to be both slightly boring and abhorrently gruesome at the same time. Not his best work. But some of the artwork is lovely. 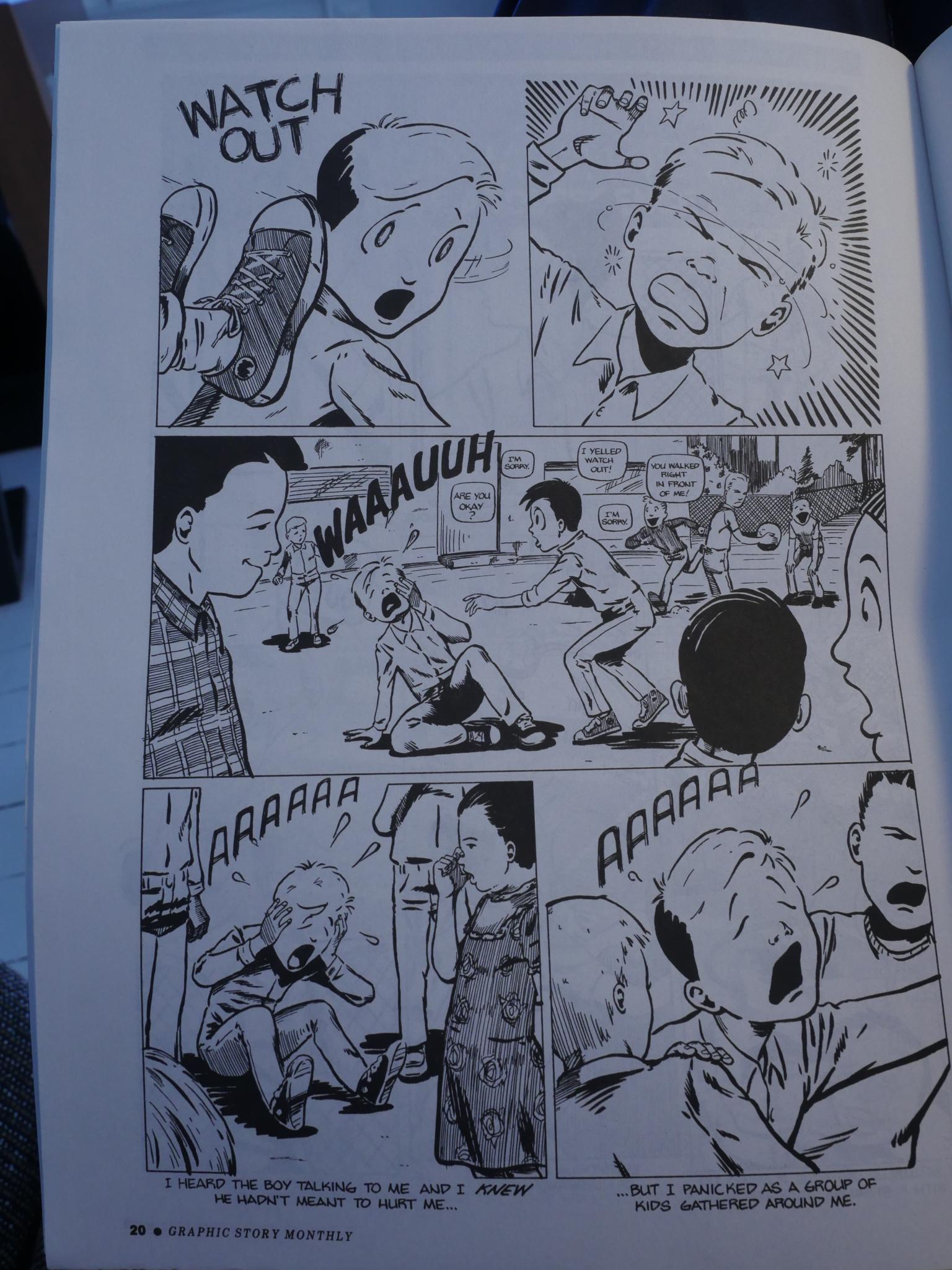 Speaking of not-quite-good-enough autobio, Craig Maynard does yet another story from his horrible, horrible childhood. And while there are things I like about his drawing (the artificiality and the starkness of the black bits), the story doesn’t connect. It’s like “see, my life was awful” and I go “OK, it was awful”. 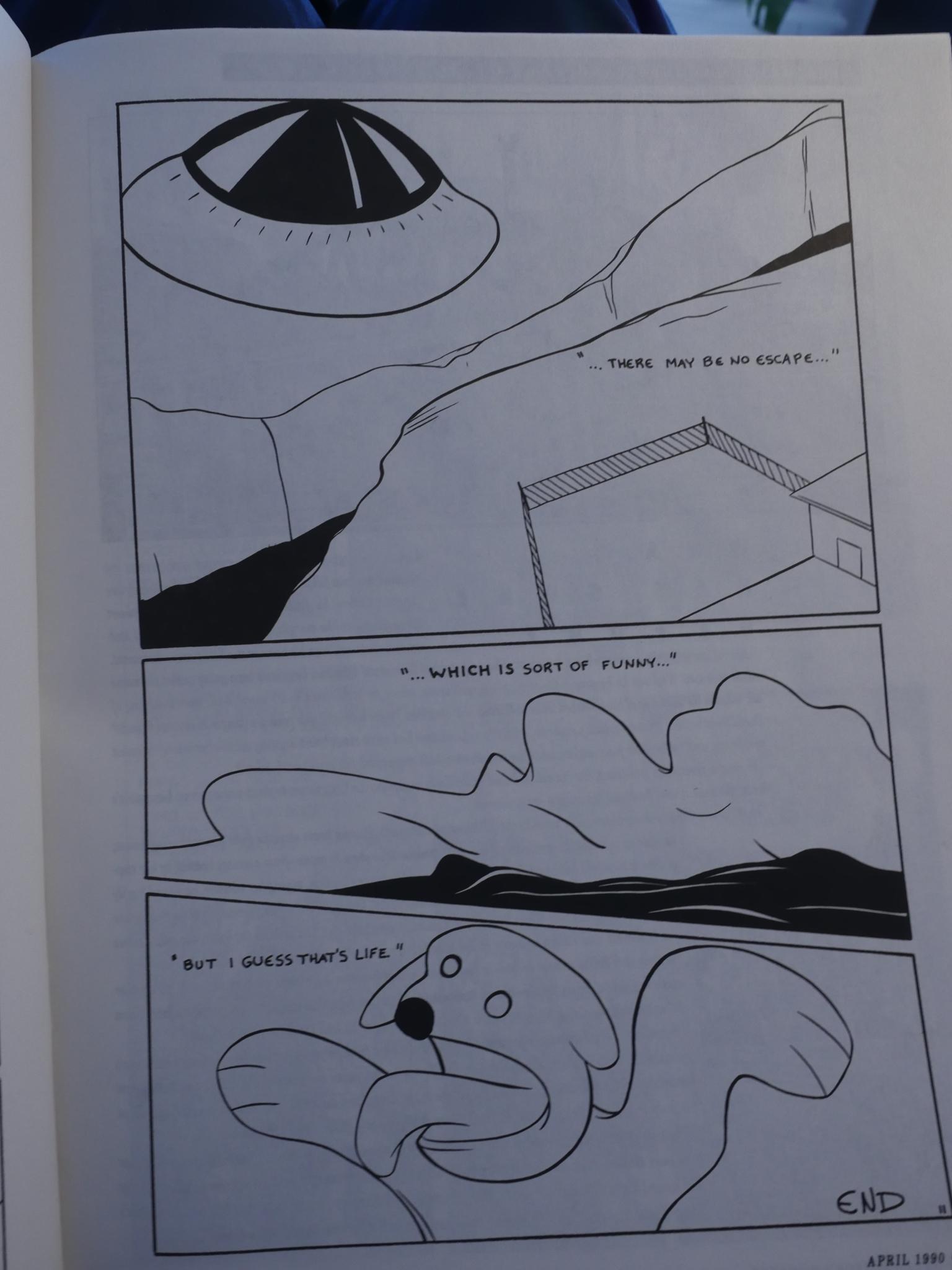 Jared Osborn’s piece is an outlier here. All the other stories in Graphic Story Monthly are very focussed on narrative, and there’s barely any formal experimentation whatsoever. This is a more abstract kind of… thing… and it’s pretty nice. 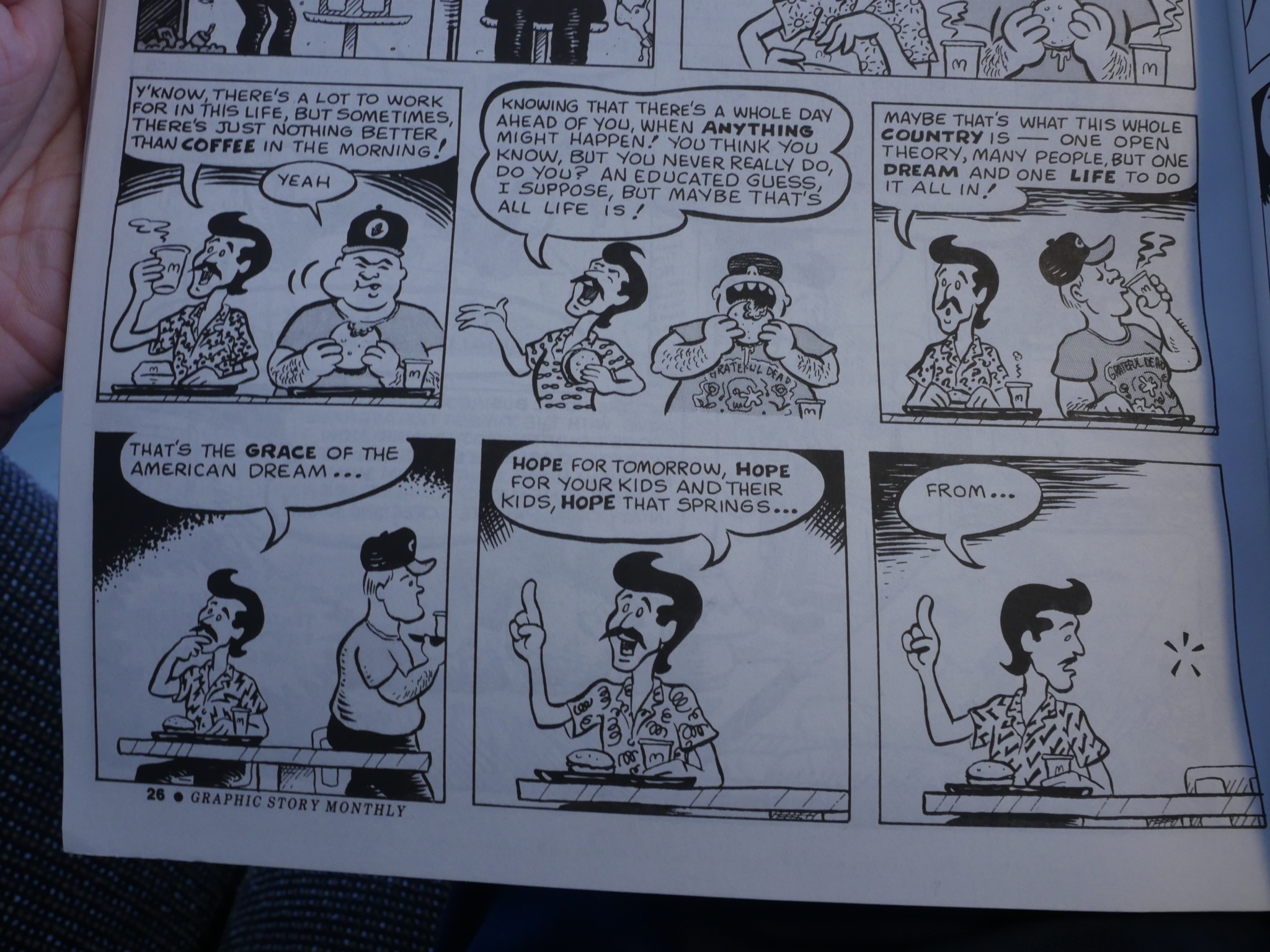 There’s a lot of humorous stories in between all the seriousness, and they’re kinda hit-and-miss. This one, by Tom Roberts and Jim Siergey, seems to ask the question “how do you do a story about a pompous bore and make it funny”, and the answer is “we don’t know”. 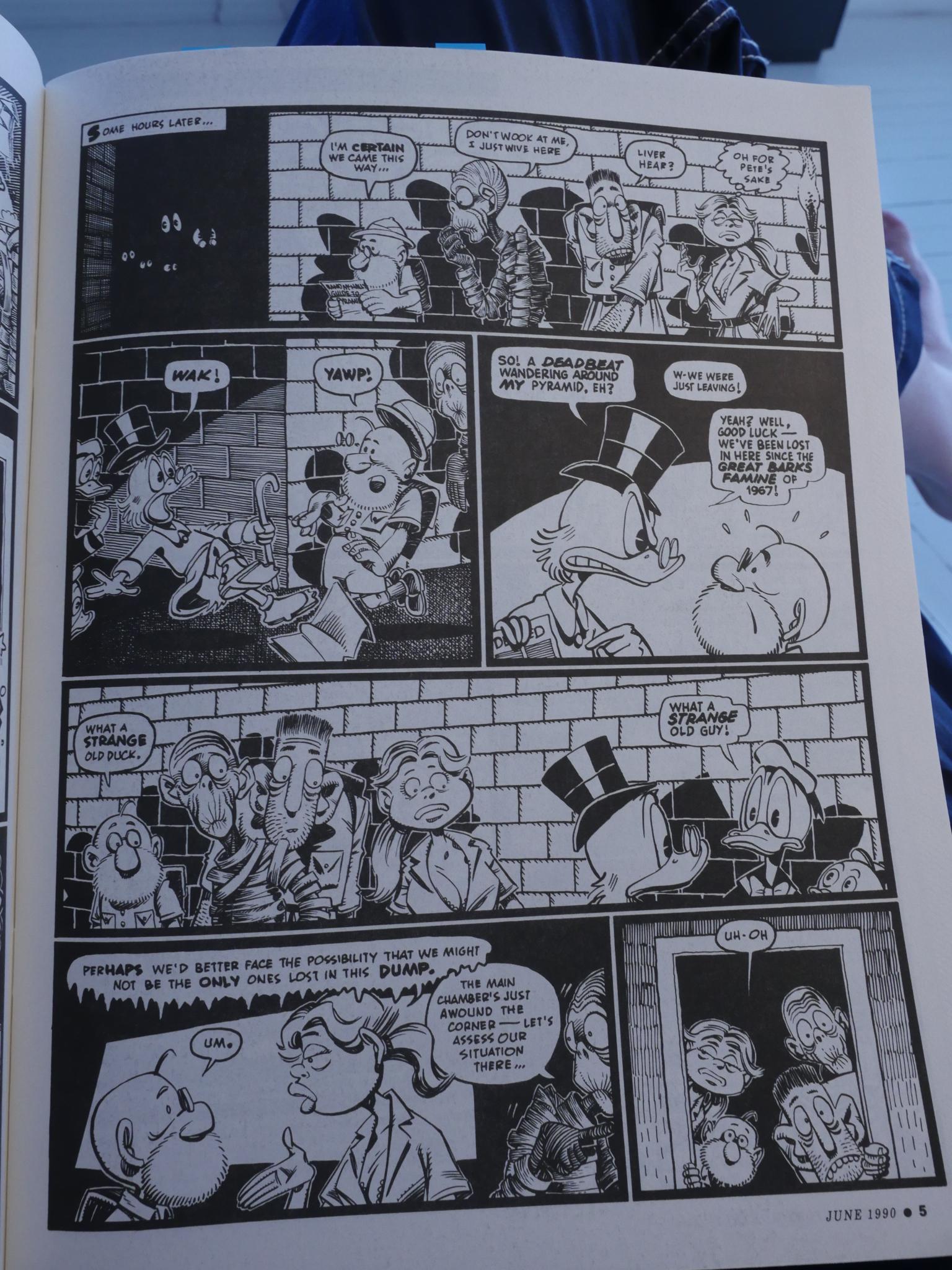 This story by Roger Langridge (Professor Cucumber and His Stereotyped Assistants) was pretty amusing. And meeting up with Uncle Scrooge inside a temple is a pretty good idea, especially since Fantagraphics a decade or two later became the main Barks publisher. 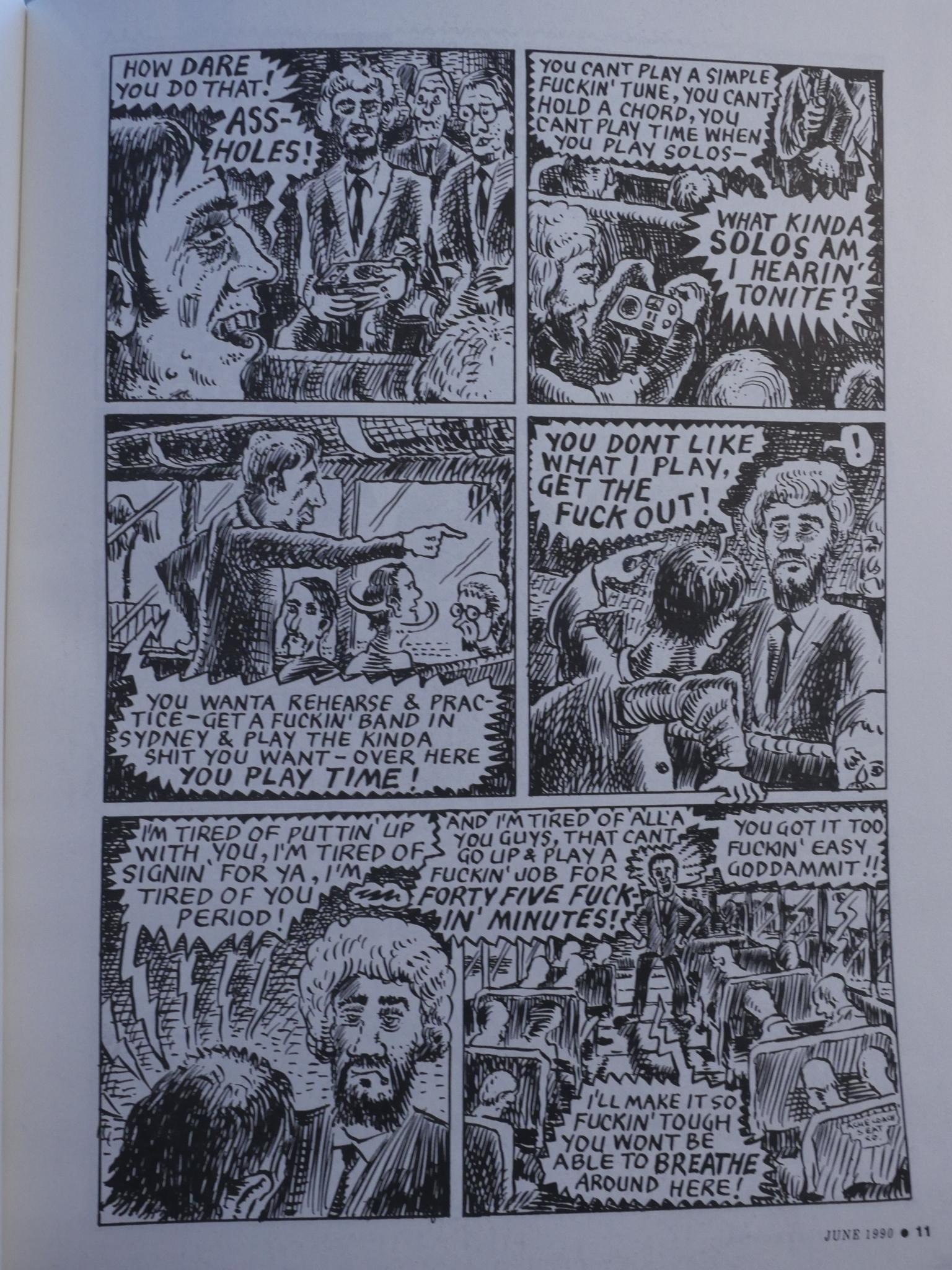 I enjoyed this Linzee Arnold story, which was allegedly based on a tape clandestinely recorded of Buddy Rich ranting to his musicians. The scratchy artwork goes really well with the deranged verbal diarrhoea. 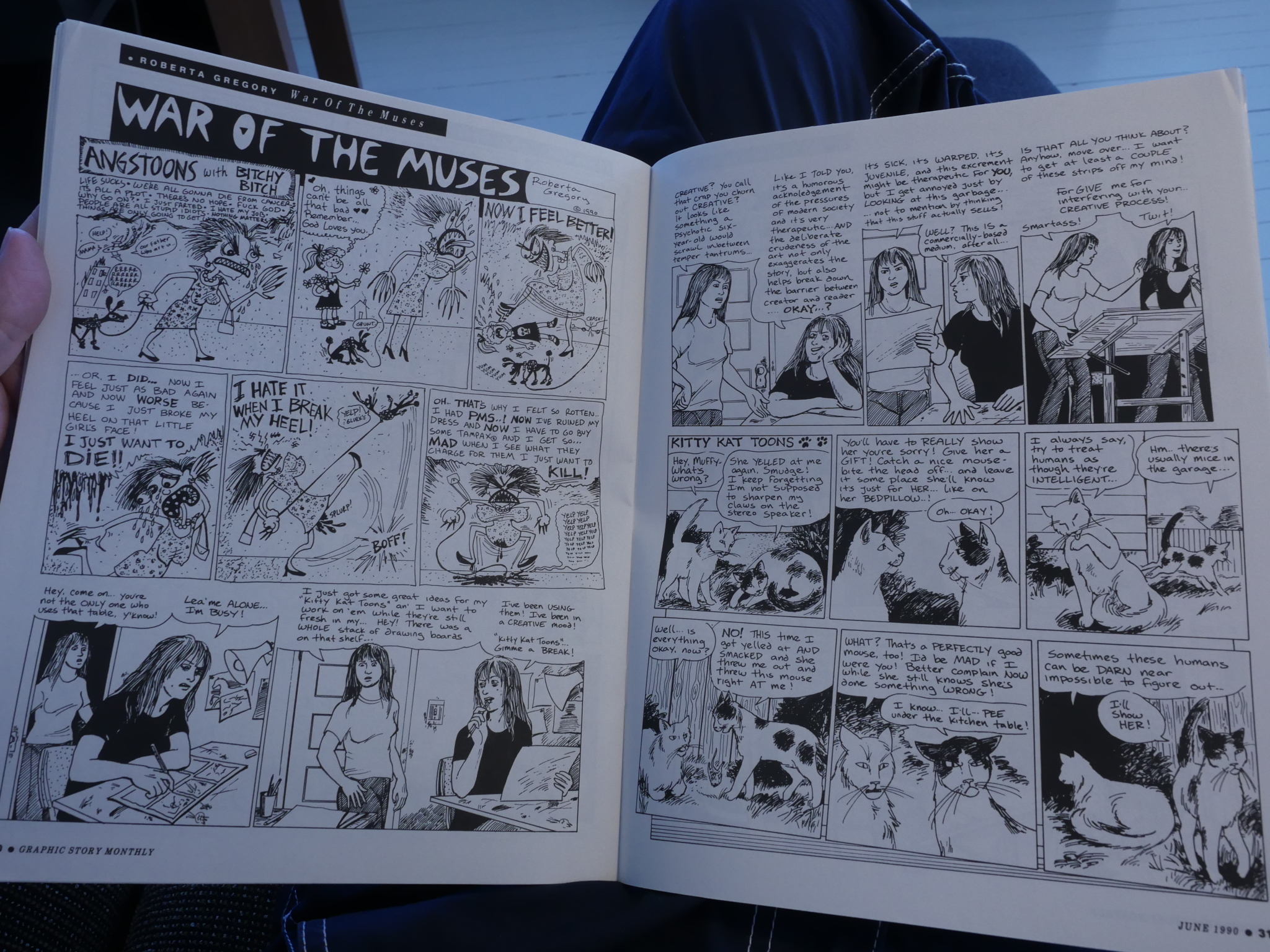 Roberta Gregory, who had recently launched her Naughty Bits comic to great success contributes a story about… well… I guess it’s really about being conflicted by the success of Bitchy Bitch, if I’m to make a guess.

Up until the sixth issue, the schedule had been true to the name of the anthology: It had been published on a monthly schedule. Before the seventh and final issue, there’s an unexplained five month gap, and everything seems to have changed. 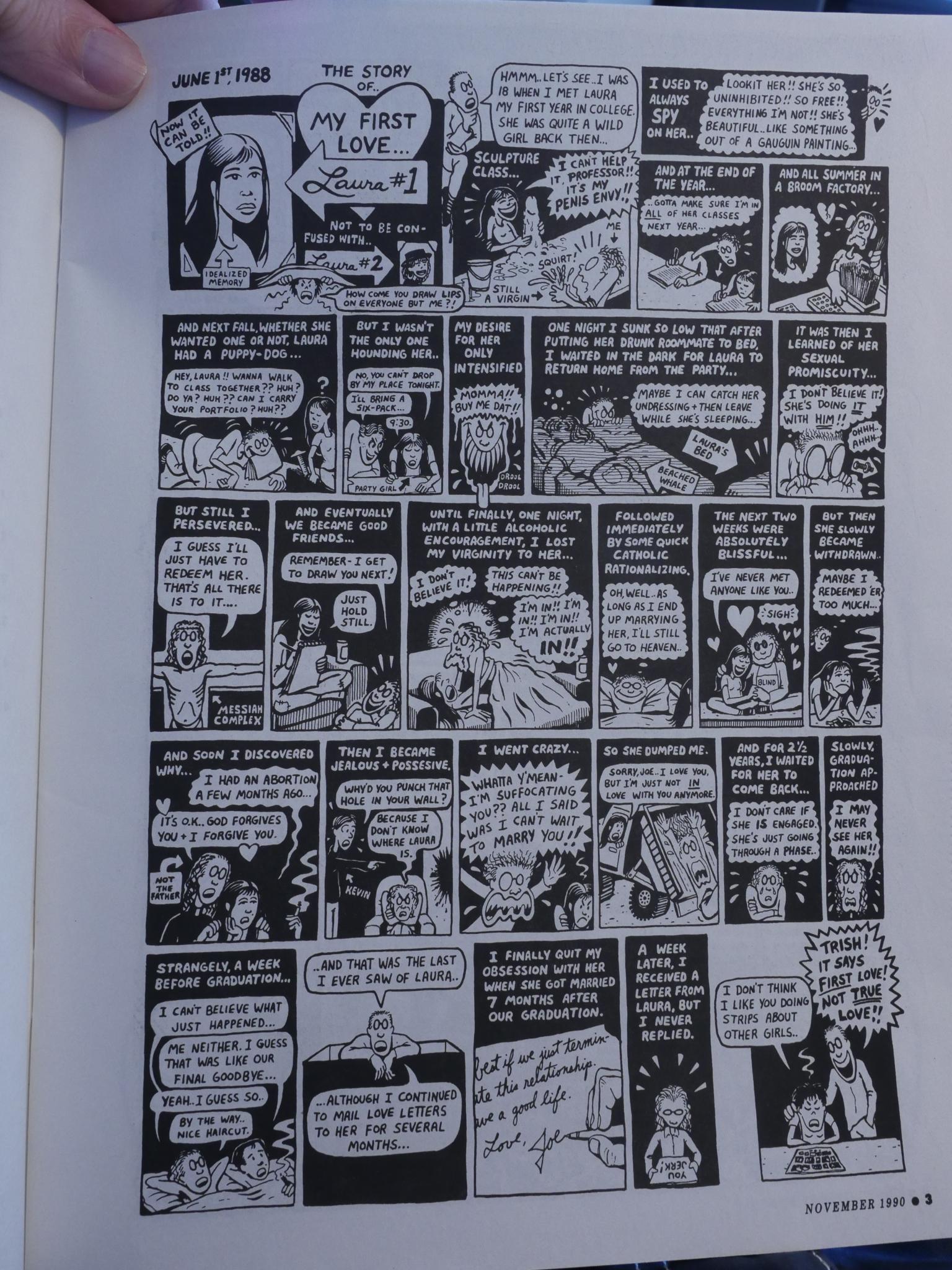 Until this issue, Graphic Story Monthly has felt very 80s. It could have been published four years earlier and nobody would have been the wiser. But with the seventh issue, we get coming super-stars like Joe Matt, doing three of his way-too-intimate and way-too-crowded autobio pages. I love them, and I remember being excited back in the 90s whenever an anthology would carry a couple of these, seemingly at random. It’s the perfect way to read them, I think.

And the same issue has the backlash to autobio stories, as if tailored to Matt’s contribution: 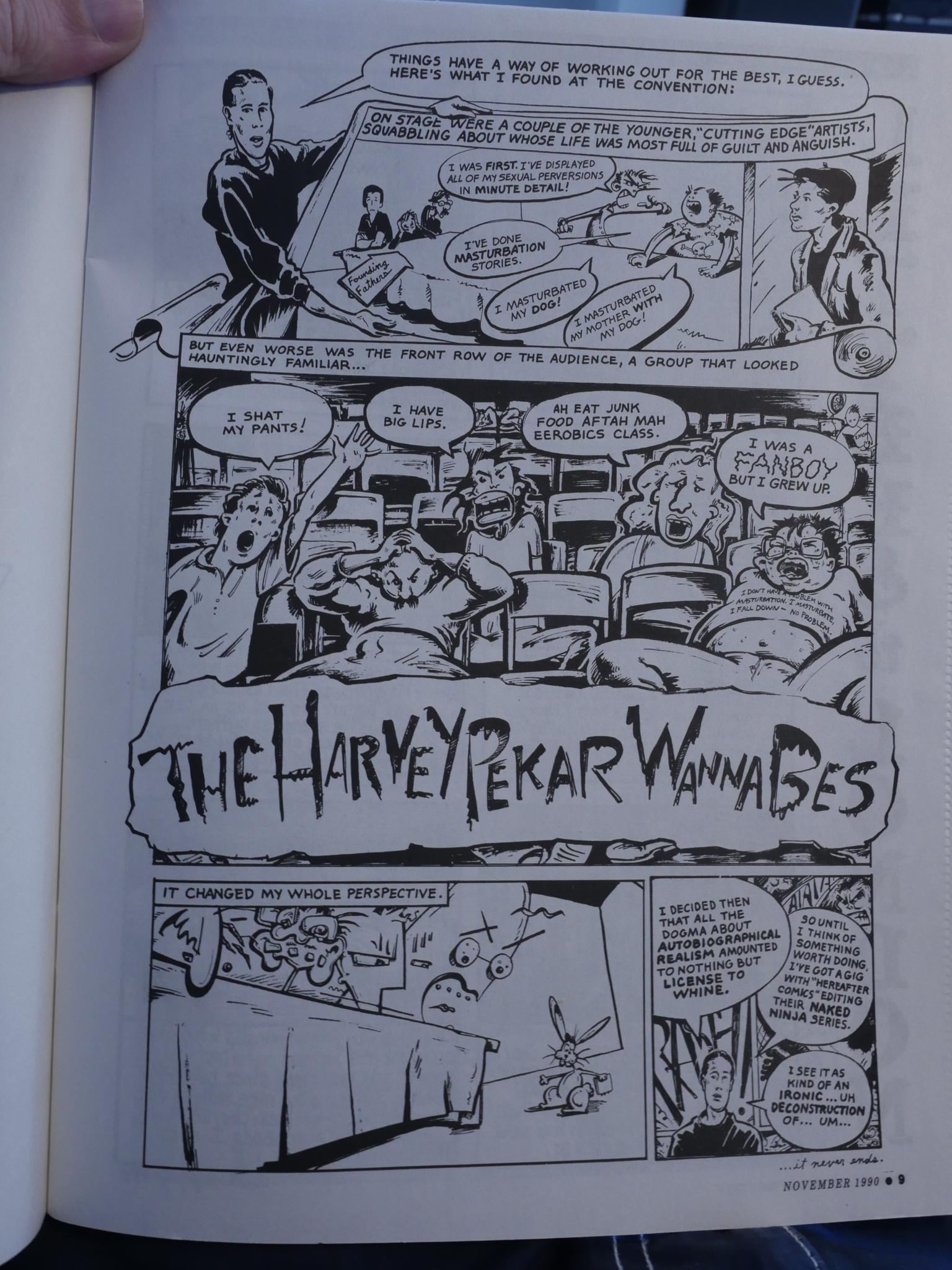 Autobio (as a comics genre) had detractors from the very beginning, but it really seemed to take off around this time. The story, by “Dennis Pimple and T. Motley” (presumably an acronym), isn’t very original or clever, but it is kinda funny. 25 years later it’s Joe Matt people remember and not “T. Motley”, so I guess the joke’s on them.

And that’s it. No more issues were published, and no explanation why, but it probably didn’t sell very much. As an anthology, it felt old-fashioned, and the Drawn & Quarterly anthology that would cover the same field (started in April 1990) did a better job at capturing what was going on in comics at the time.

But it was perfectly nice while it lasted.