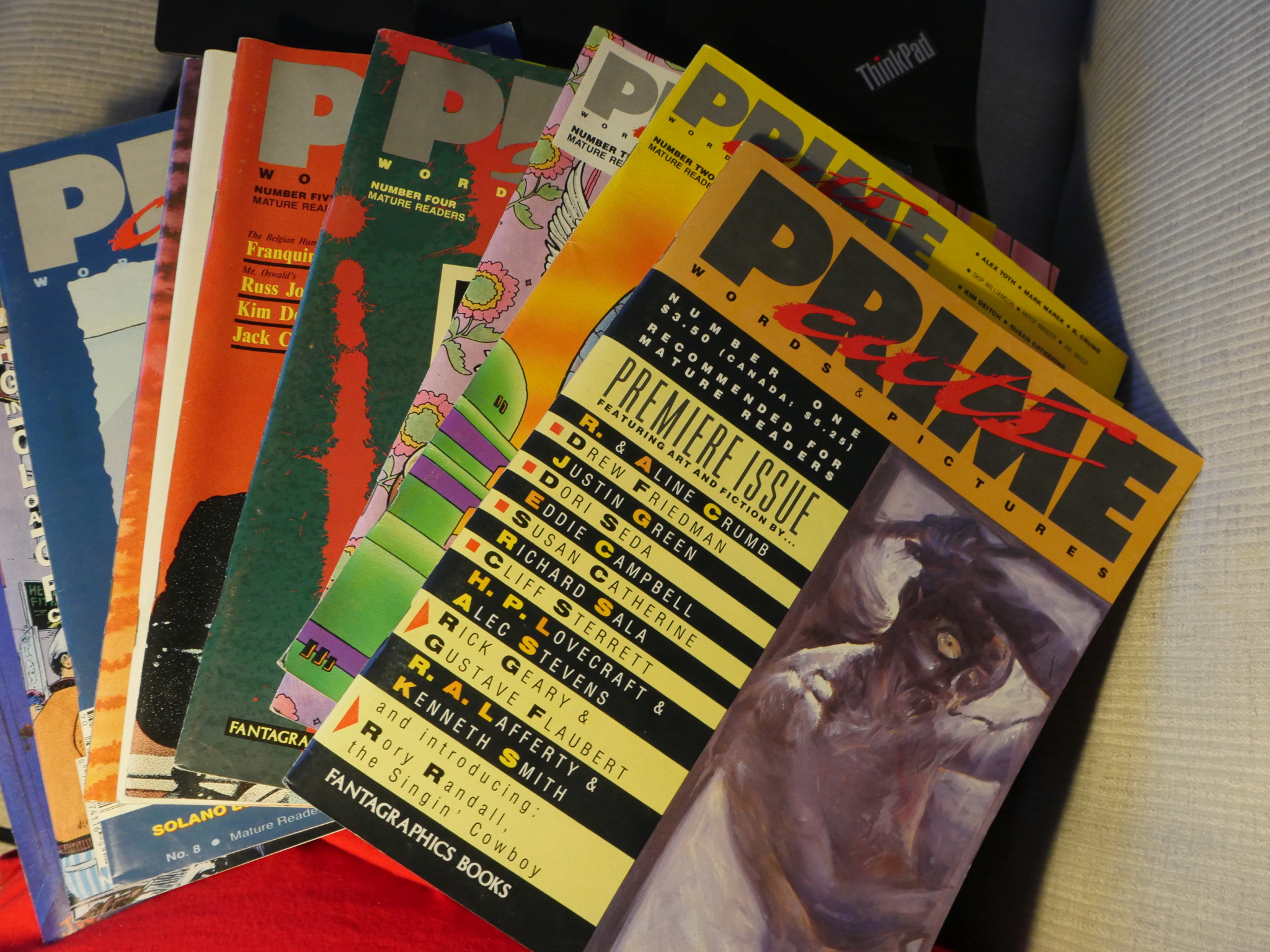 There are some storied American comics anthologies: Arcade, Raw, Weirdo… (Well, and the ones that started popping up since the turn of the century.) Prime Cuts isn’t one that you hear mentioned much these days.

It was (I think) Fantagraphics’ first major “serious” anthology. They had already published a few of them there “ha ha” anthologies, but it seemed like they had higher ambitions for this one.

Just look at the introduction from the first issue: 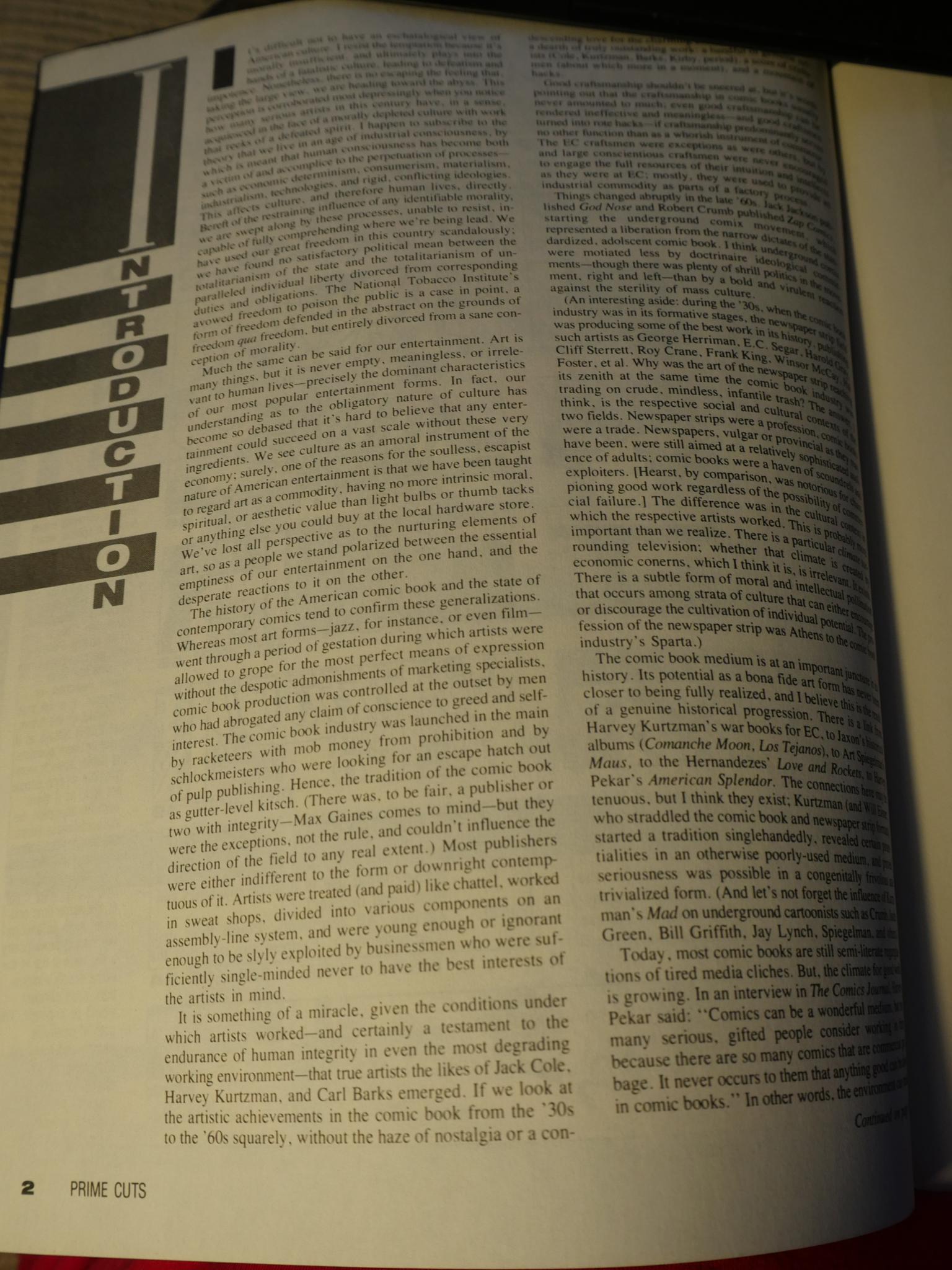 Ok, that’s probably out of focus, so just let me type in the first couple of sentences.

“It is difficult not to have an eschatalogical (sic) view of American culture. I resist the temptation because it’s morally insufficient, and ultimately plays into the hands of fatalistic culture, leading to defeatism and impotence. Nevertheless, there is no escaping the feeling that, taking the larger view, we are heading towards the abyss.”

We’re off to a solid start. A quotation from Enzensberger on the indicia page; a strip by R Crumb & Aline Kominsky-Crumb; Eddie Campbell; Dori Seda; Drew Friedman; Richard Sala and Justin Green. 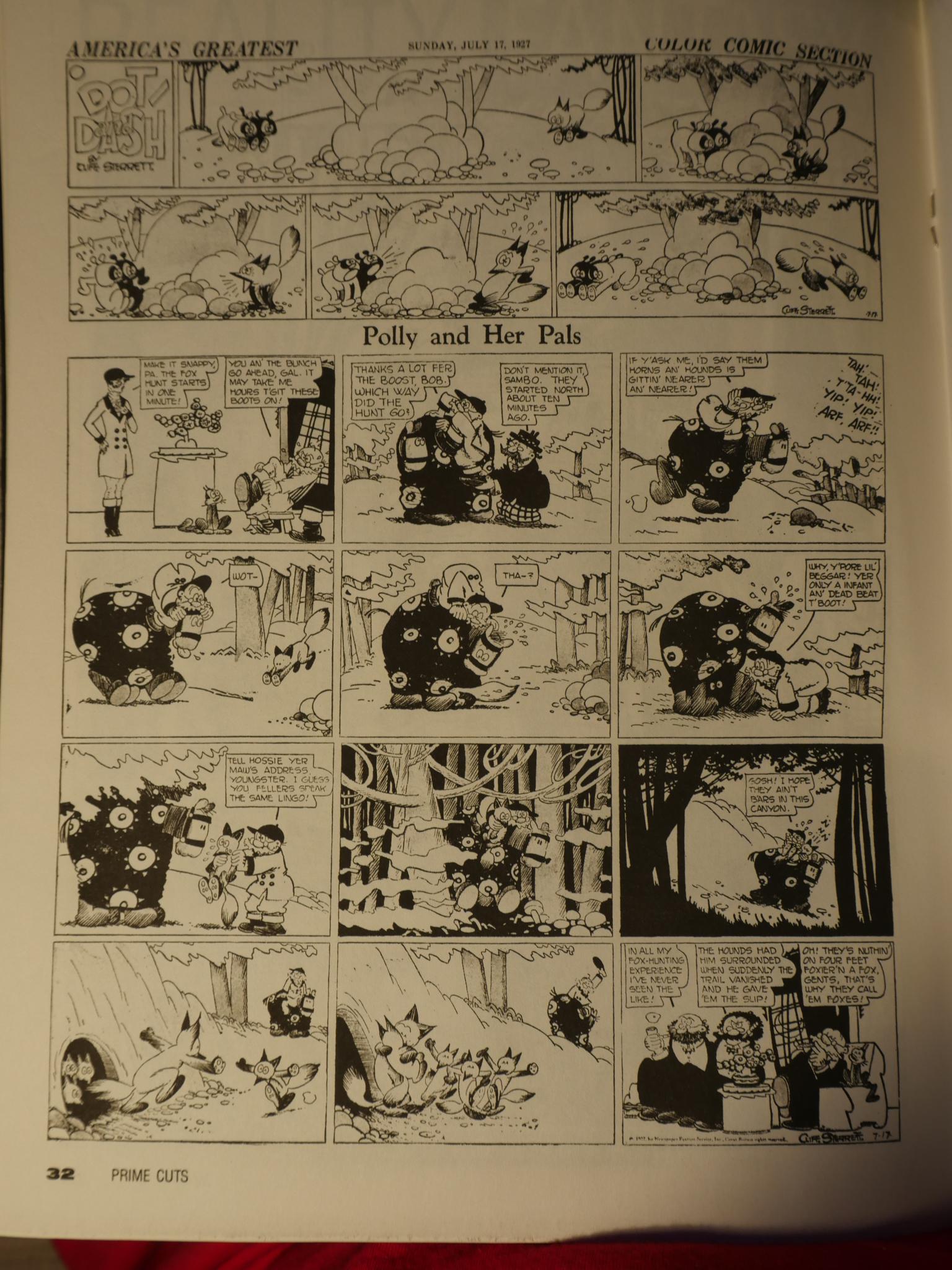 And some pages by Cliff Sterrett, too. Most of these could have (and have) appeared in Weirdo instead. 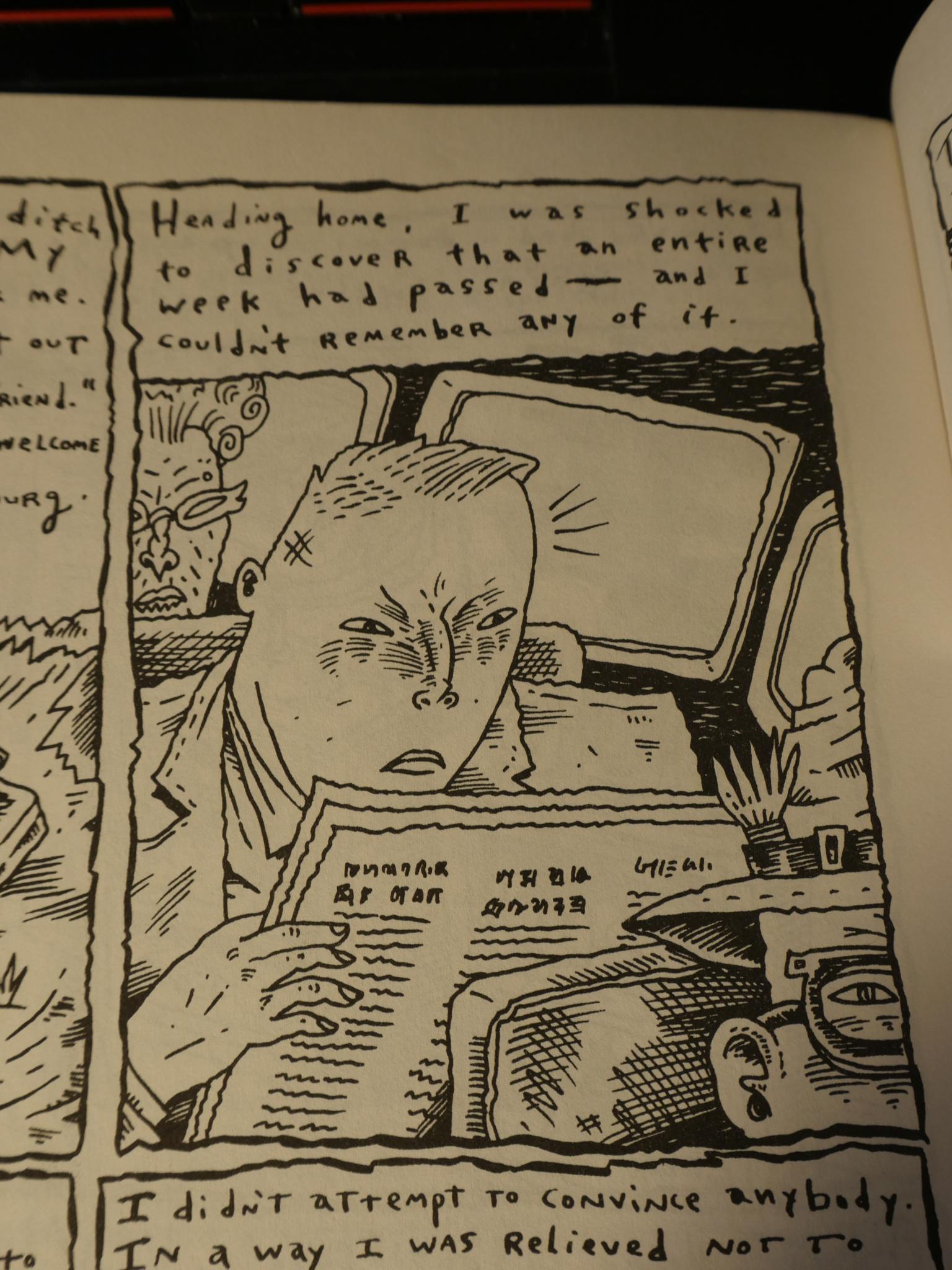 (And to digress slightly, I think this is the most quintessential Richard Sala panel ever. It sort of sums up everything about any story he’s ever done. And not in a bad way: He just has his very productive baggage of obsessions he’s been using very productively over the years. And I just love everything about the artwork in that panes, from the intent expression on the protagonist, to the glasses on the eyes on the woman behind him, to the guy in front of him staring at us, the readers. It’s a conspiracy!)

But here’s something that I thing definitely wouldn’t have been in Raw: 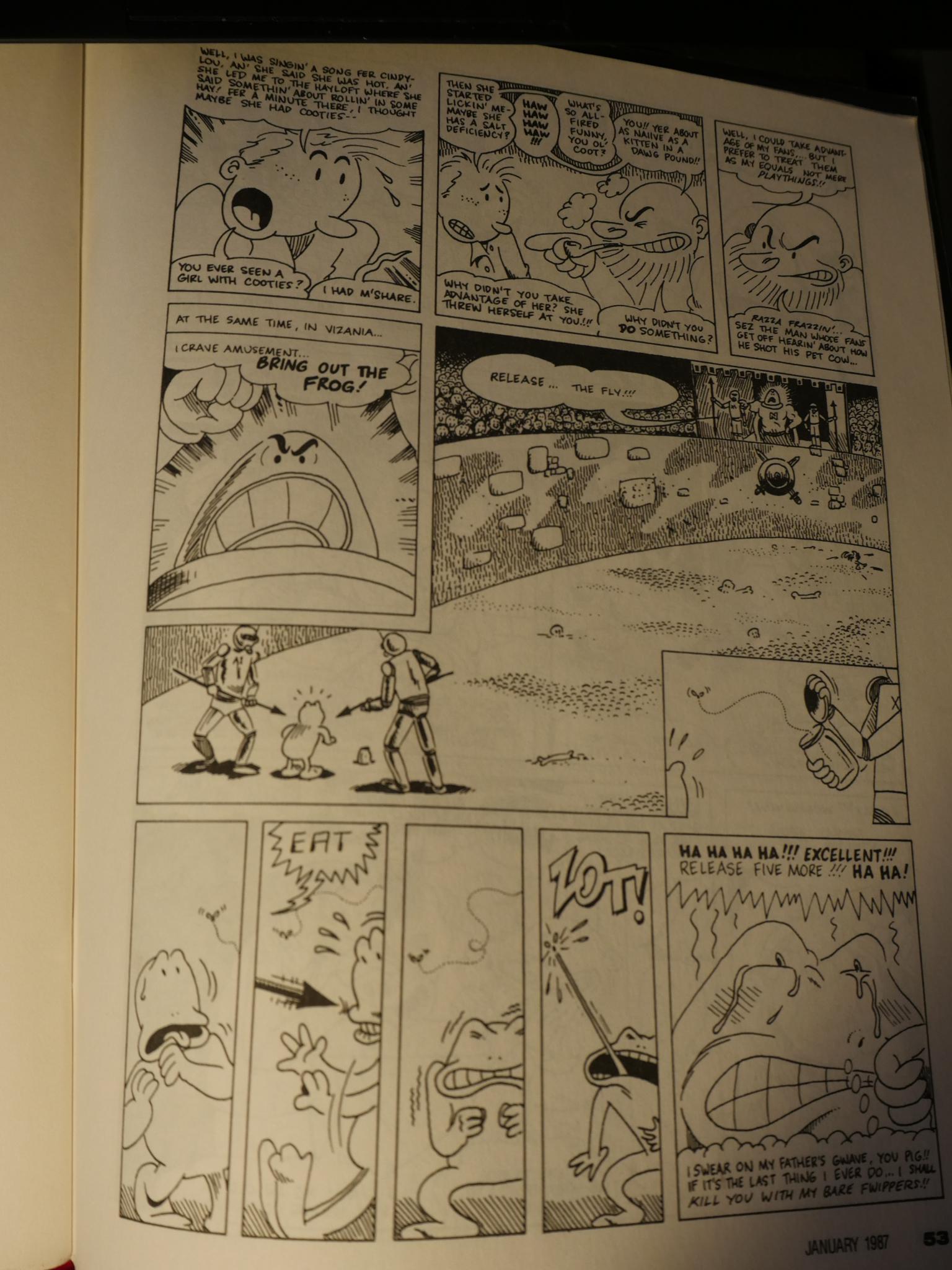 This is Mitch Manzer’s Rory Randall, The Singing Cowboy, and it’s a series that would run for six issues. And it is weapons grade silliness. When it works, it is very funny, but it’s an odd thing to include in an anthology like this. (He went on to publish Lust of the Nazi Weasel Women through Fantagraphics, but didn’t do much more than that, according to the Grand Comics Database…) 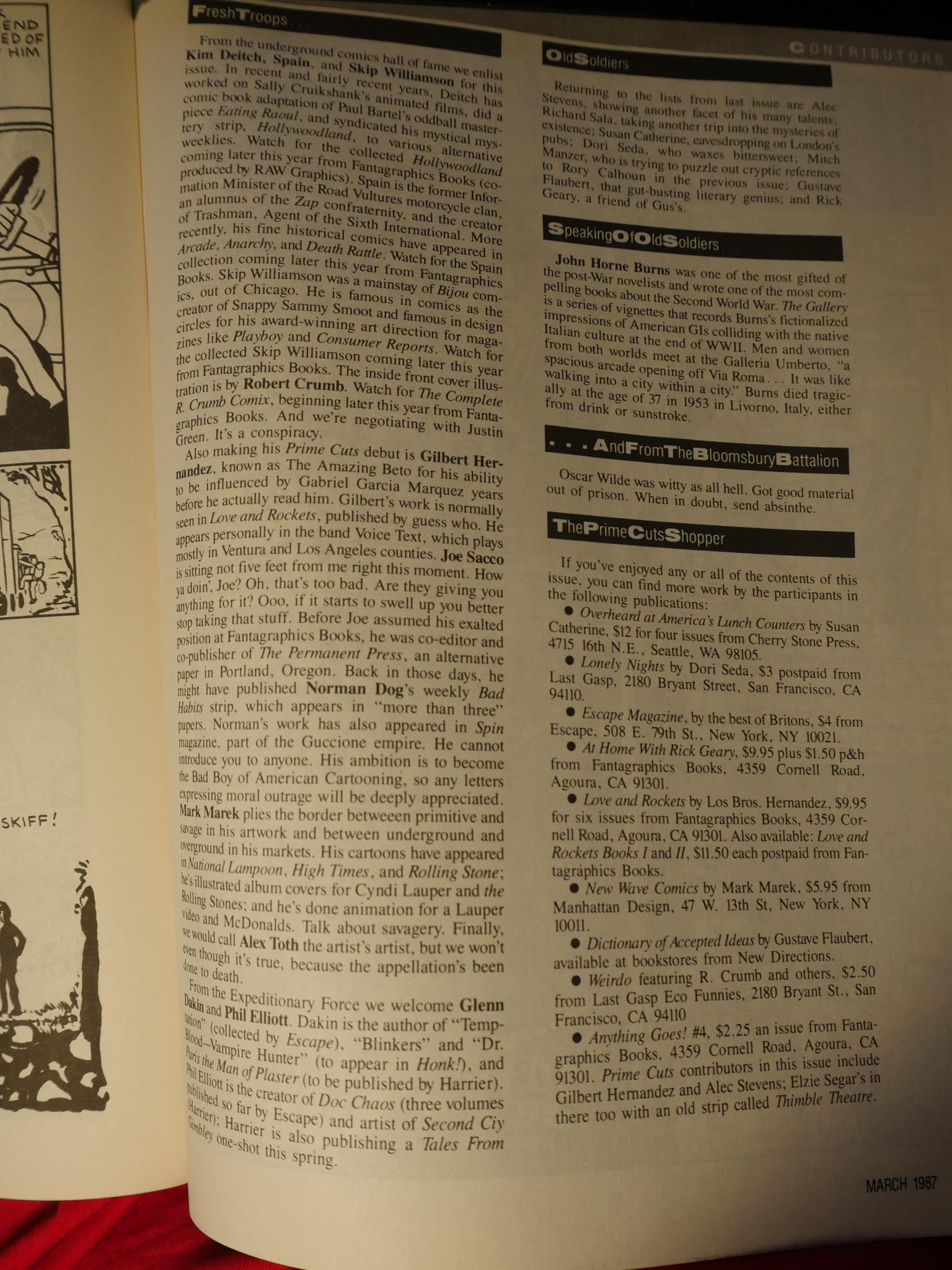 Another feature in Prime Cuts are slightly more voluminous author intros than you’d normally see, along with full-page intros to some of the later translated pieces. But I thought this one was amusing: 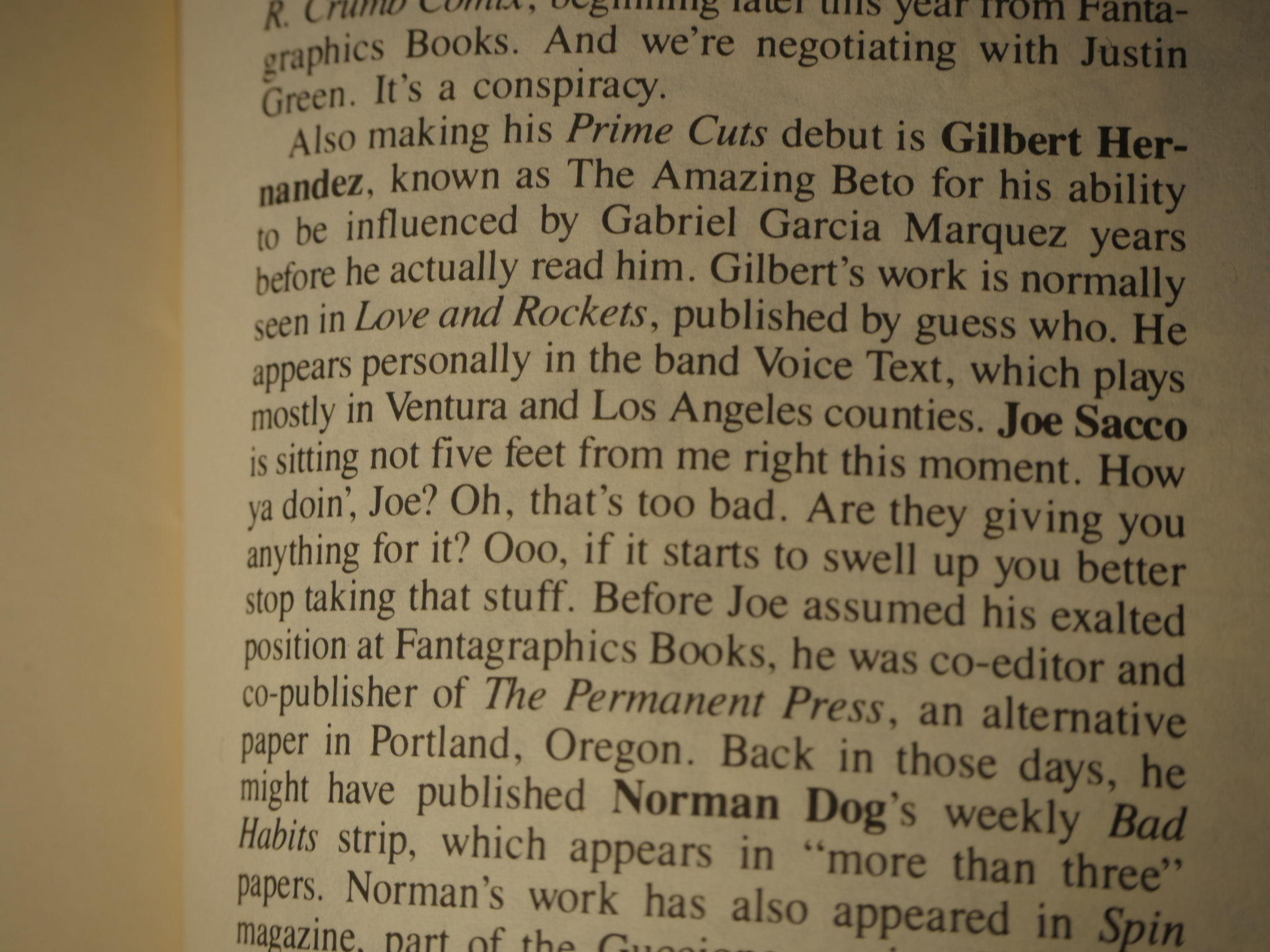 (The bit about Beto and Garcia Marquez, that is.) 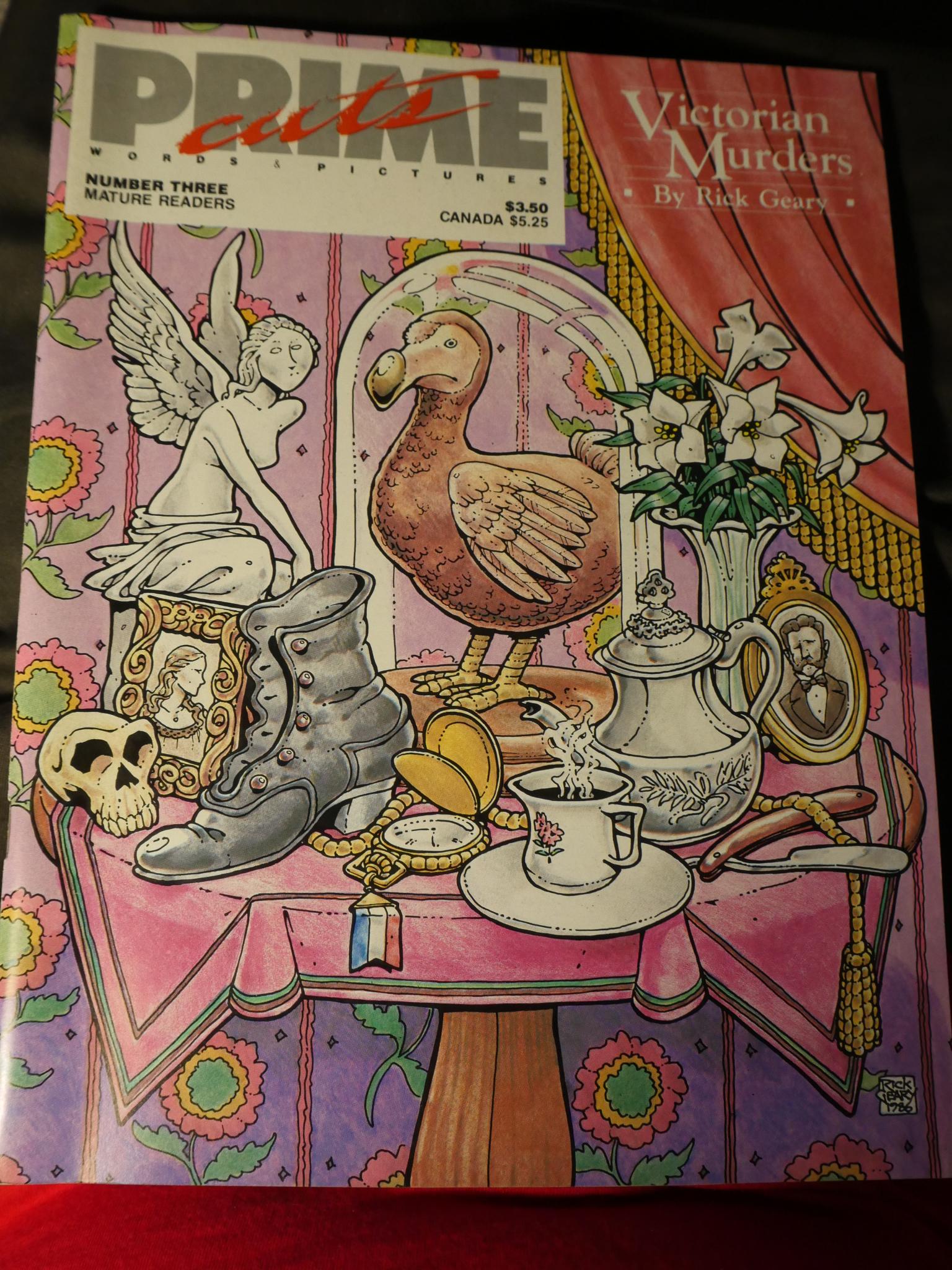 Issue three has one of the first “Victorian Murder” story by Rick Geary (which was reprinted in the first collection, I vaguely recollect?). But I just wanted to note here how much I love, in particular, his way of drawing objects. It’s not quite naturalistic — everything seems to be rounder and bulge in slightly odd places, but it’s mostly not something you can put your finger on. He just draws these things as if every thing had a personality. A kinda amiable personality.

Not that his people are bad or anything (they’re lovely, too), but nobody draws objects like Geary.

But talking about being reprinted: The same issue also has an excerpt from R Crumb’s teenage comics: 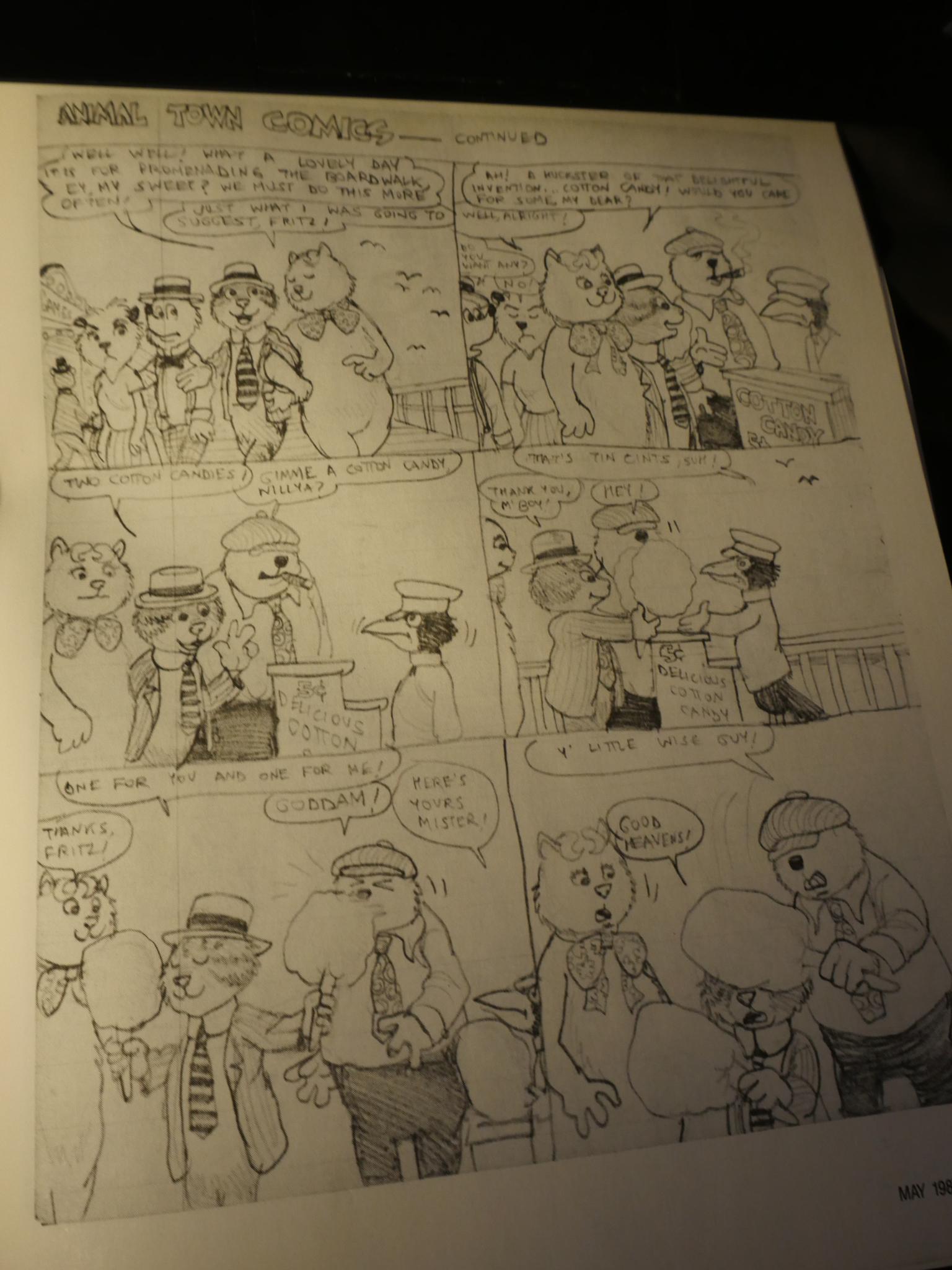 As well as a six page excerpt from Jim (by Jim Woodring). The Jim excerpts are good, and the Crumb excerpts are interesting, I guess, but this is a very odd way of putting an anthology together. 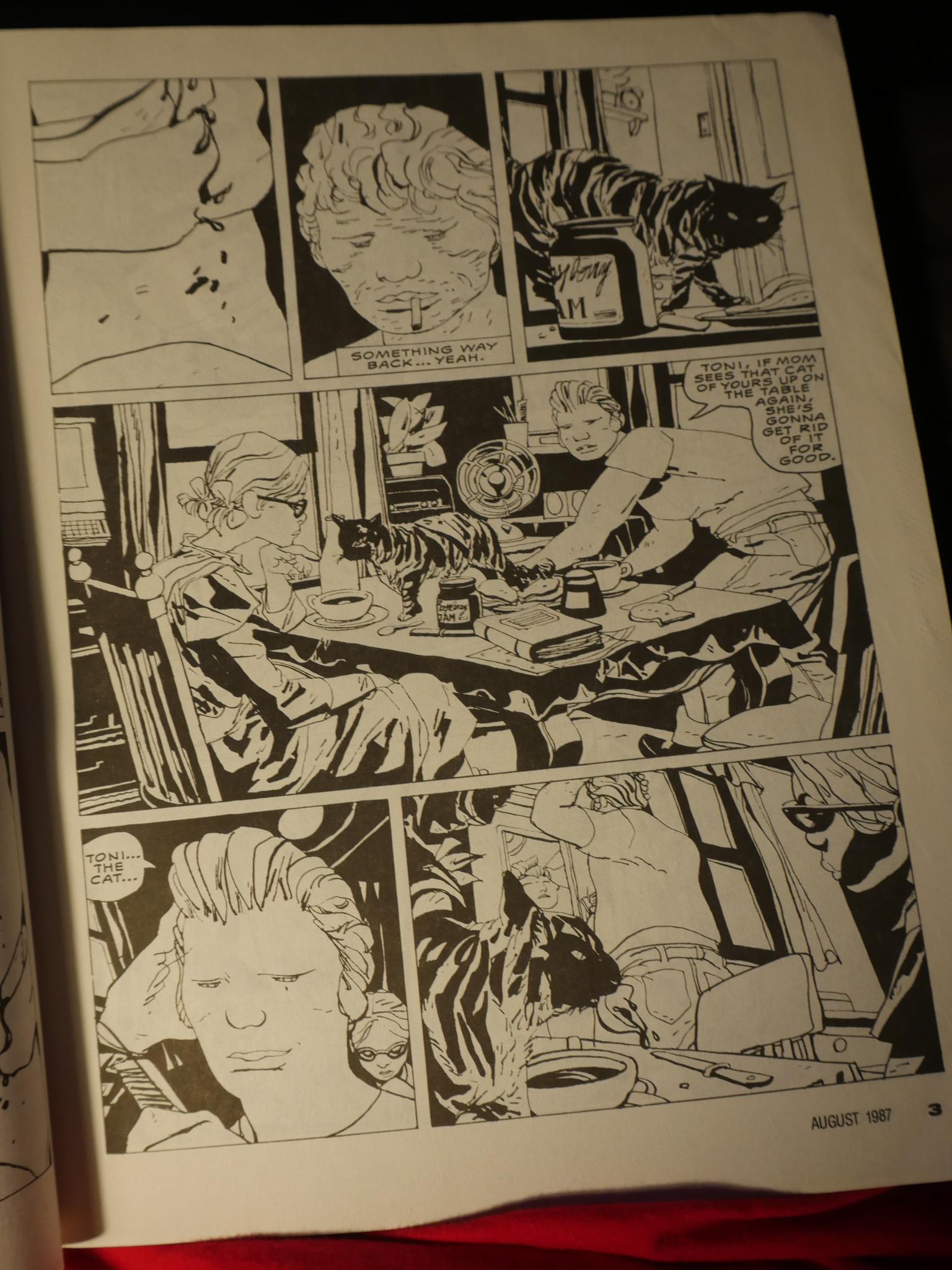 There’s a great Sinner story in the next issue, but Fantagraphics was publishing a Sinner book at the time, so, again, it doesn’t seem like an ideal way to be doing an anthology if you want to have the anthology stand on its own feet, instead of being a company ad catalogue.

Ok, I have to excerpt this Rory Randall joke. (What you need to know: The person not seen here can’t say the “r” sound.) 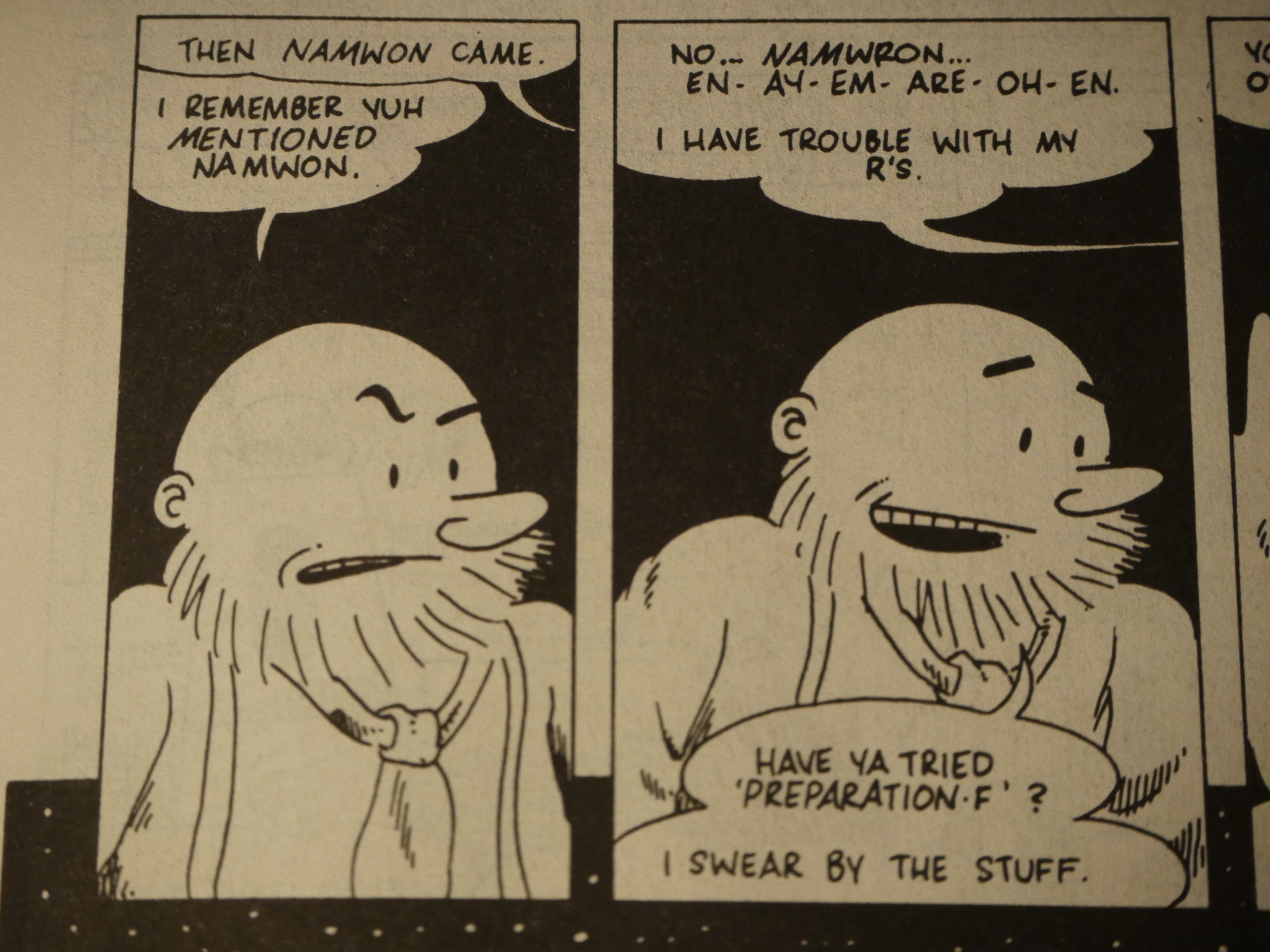 Now I’m ashamed of myself, but Manzer should be more ashamed.

Anyway, the anthology continues to trundle along… More translated stuff starts popping up, and the last half of the run is dominated by the rather overwrought Ana serial by F. Solano Lopez. But people like Norman Dog appears: 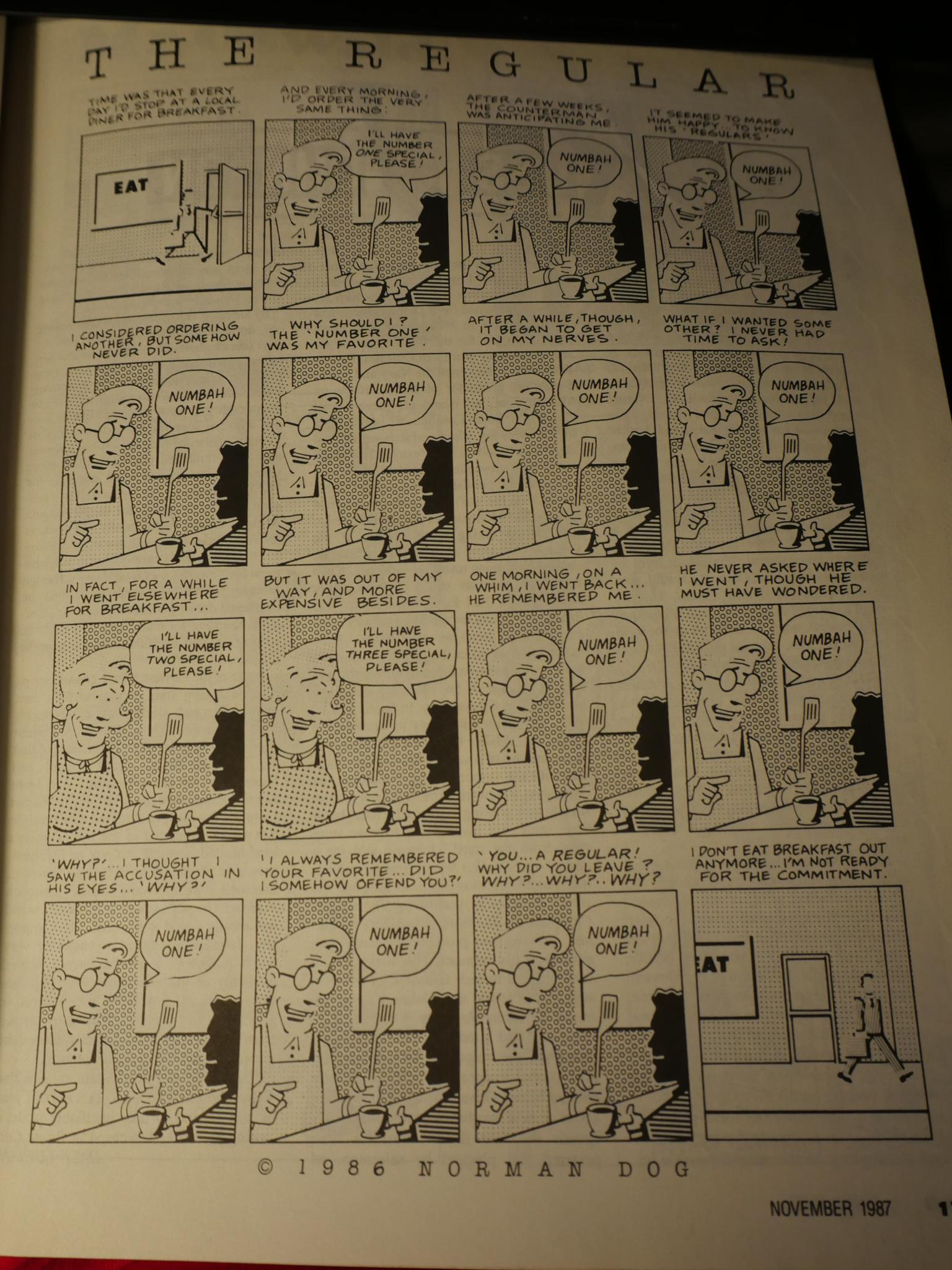 I quite enjoyed the Kay Boyle post war story from France: 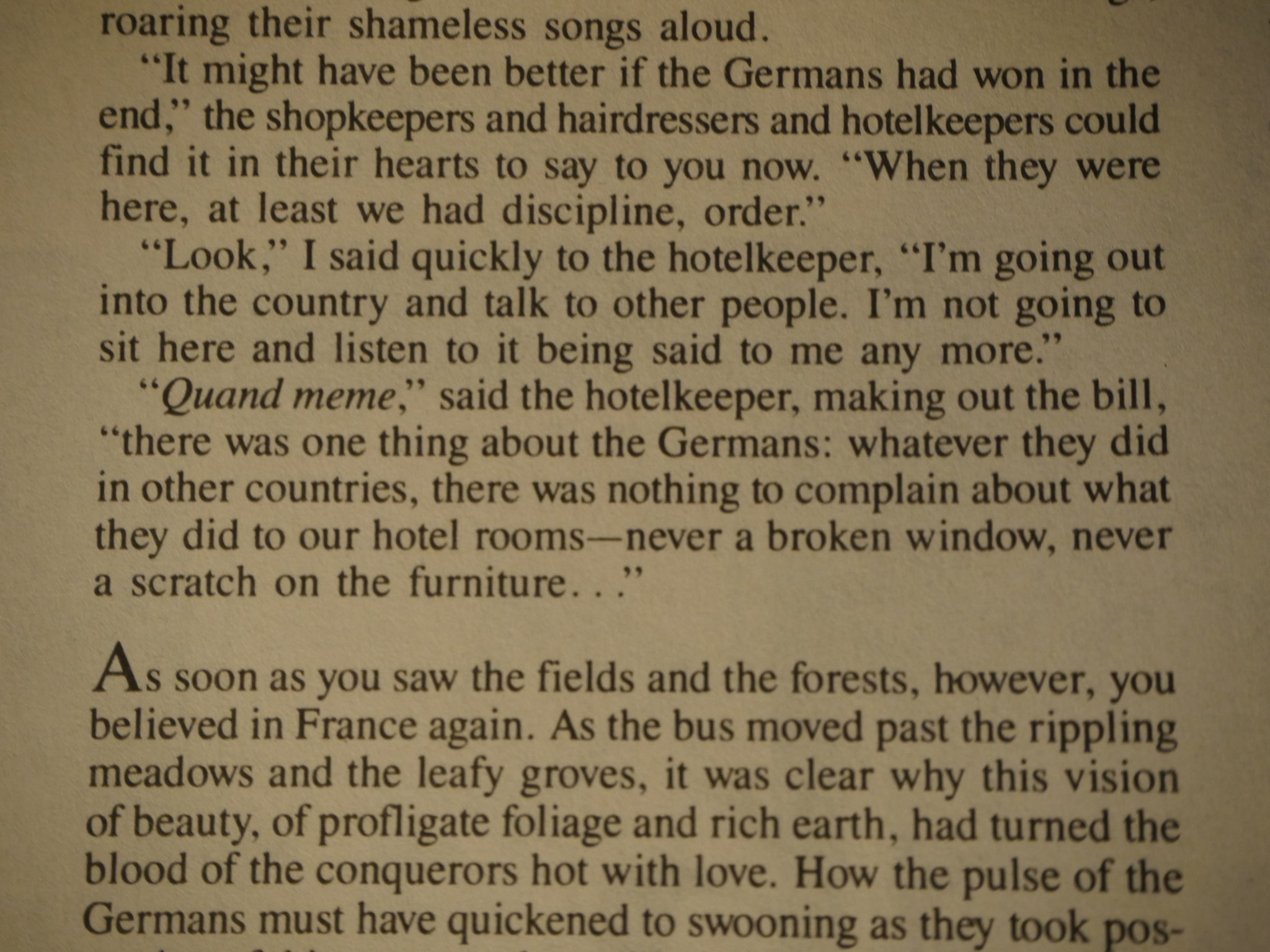 Prime Cuts sometimes feel like an oldee timee version of somebody’s Tumblr page: Whatever that person likes at the time ends up in the magazine. While anthologies like Raw has a very clear point of view, Prime Cuts does not. Reading an issue of Raw (I re-read all the large sized issues last year) is an orchestrated experience: Everything fits together.

Prime Cuts has great stuff (and some not-so-great), but it’s like: “Here! I gathered up enough comics and stuff to fill one 64 page issue! Now read!”

In the last few issues we venture into the ever-popular “embarrassing autobio” genre, but I think Craig Maynard won it: 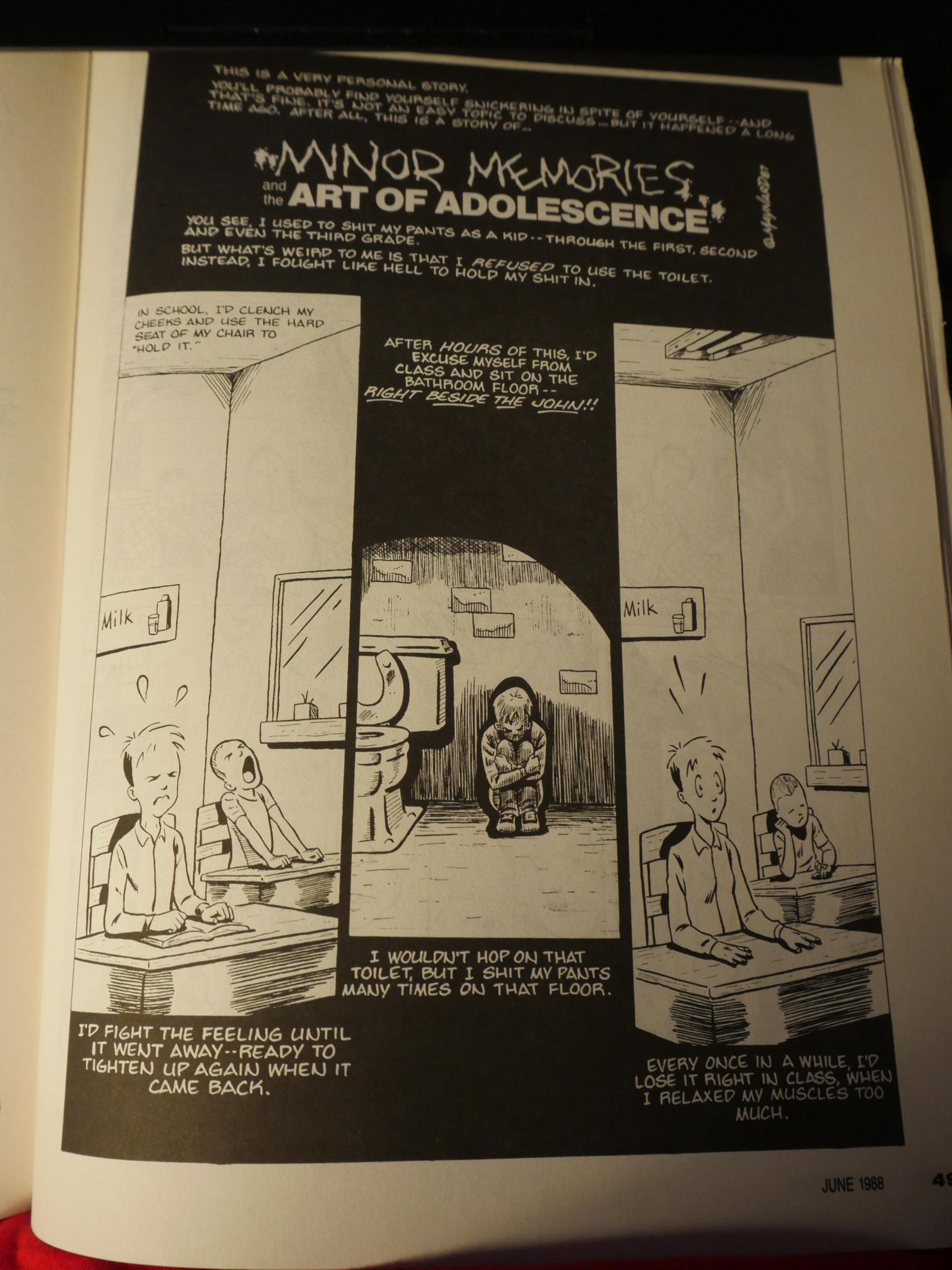 Ok, that’s more embarrassing than everything else.

Remember I said, back up there, how Prime Cuts started off with all those household names? Well, the last issue looks like this: 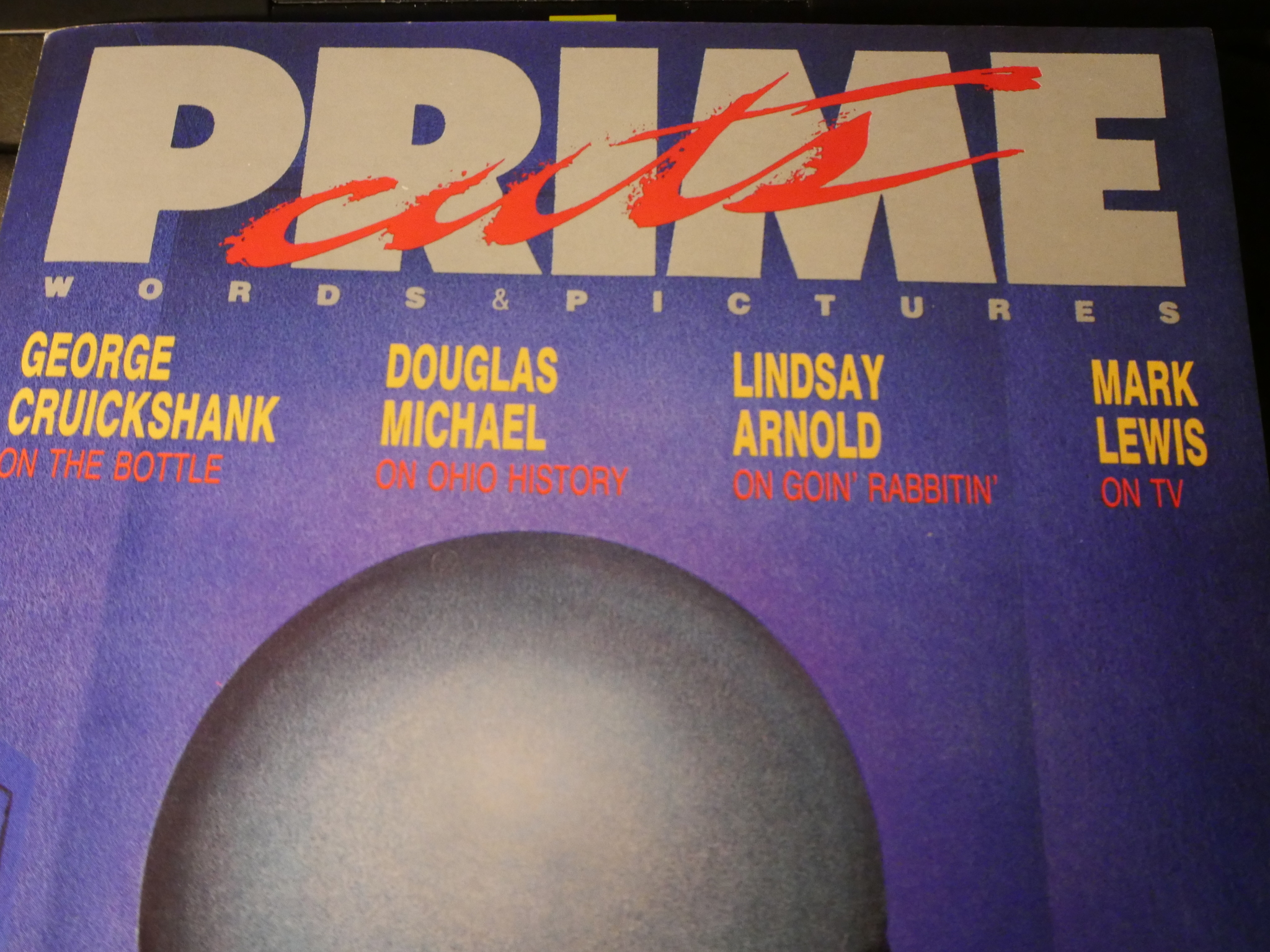 But there are people like Carel Moisewitch inside, so that’s more than a bit unfair.

The last three issues had essays by Herman Hesse, and the last four (I think) had no author introductions. If I were to make an uninformed guess, I think the editor started losing interest around issue four, and lost all interest by issue eight. It started off quite ambitiously, but it never achieved any sort of coherence.

I haven’t re-read any of the other Fantagraphics anthologies yet, but I suspect this is a problem that continues on Graphics Story Monthly and Zero Zero. It wasn’t until Mome that Fantagraphics finally made a great anthology series.

I think. I guess I’ll find out when I get to those anthologies.