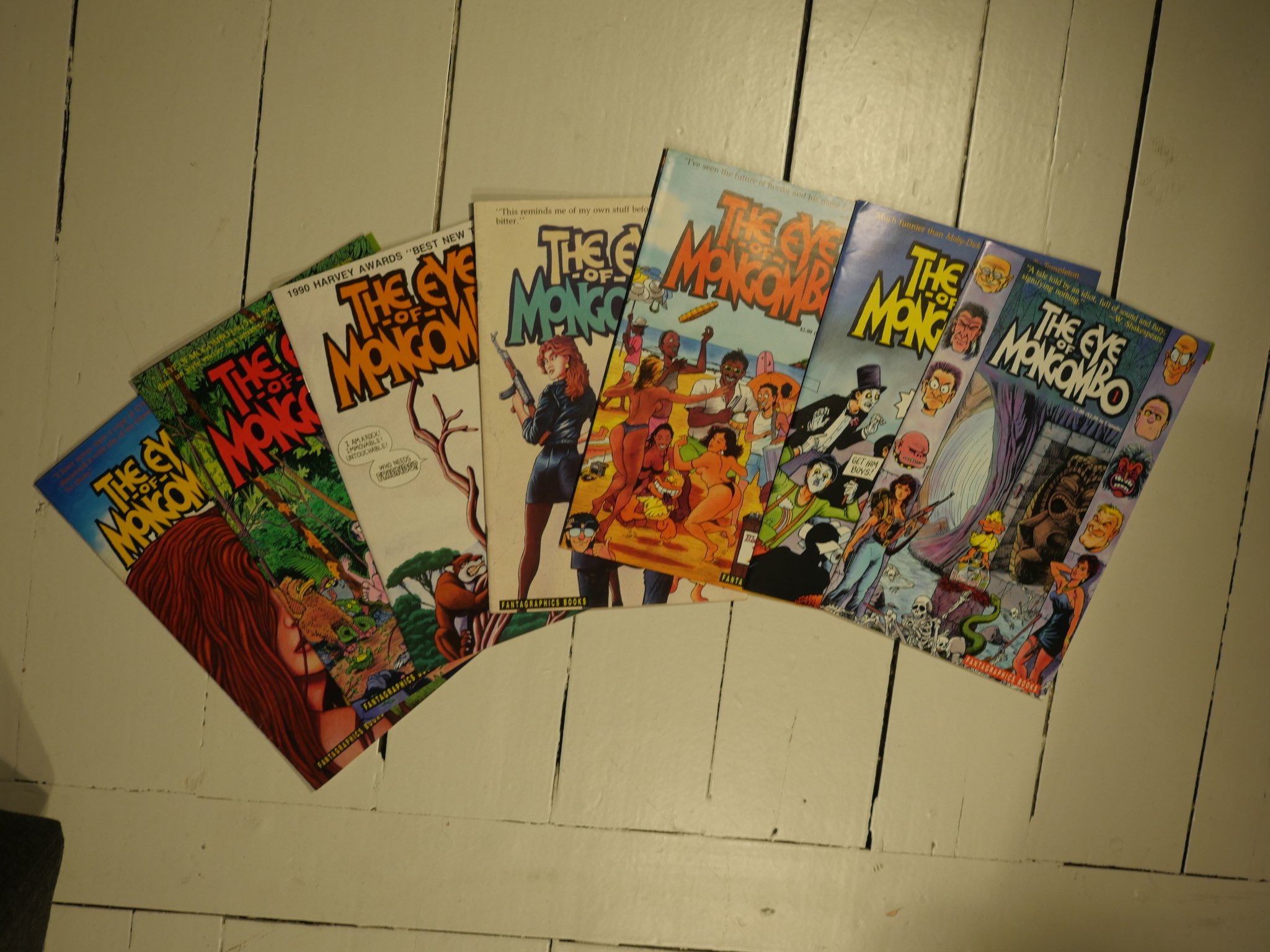 Before this series, Doug Gray had a couple of appearances in Critters, I think. 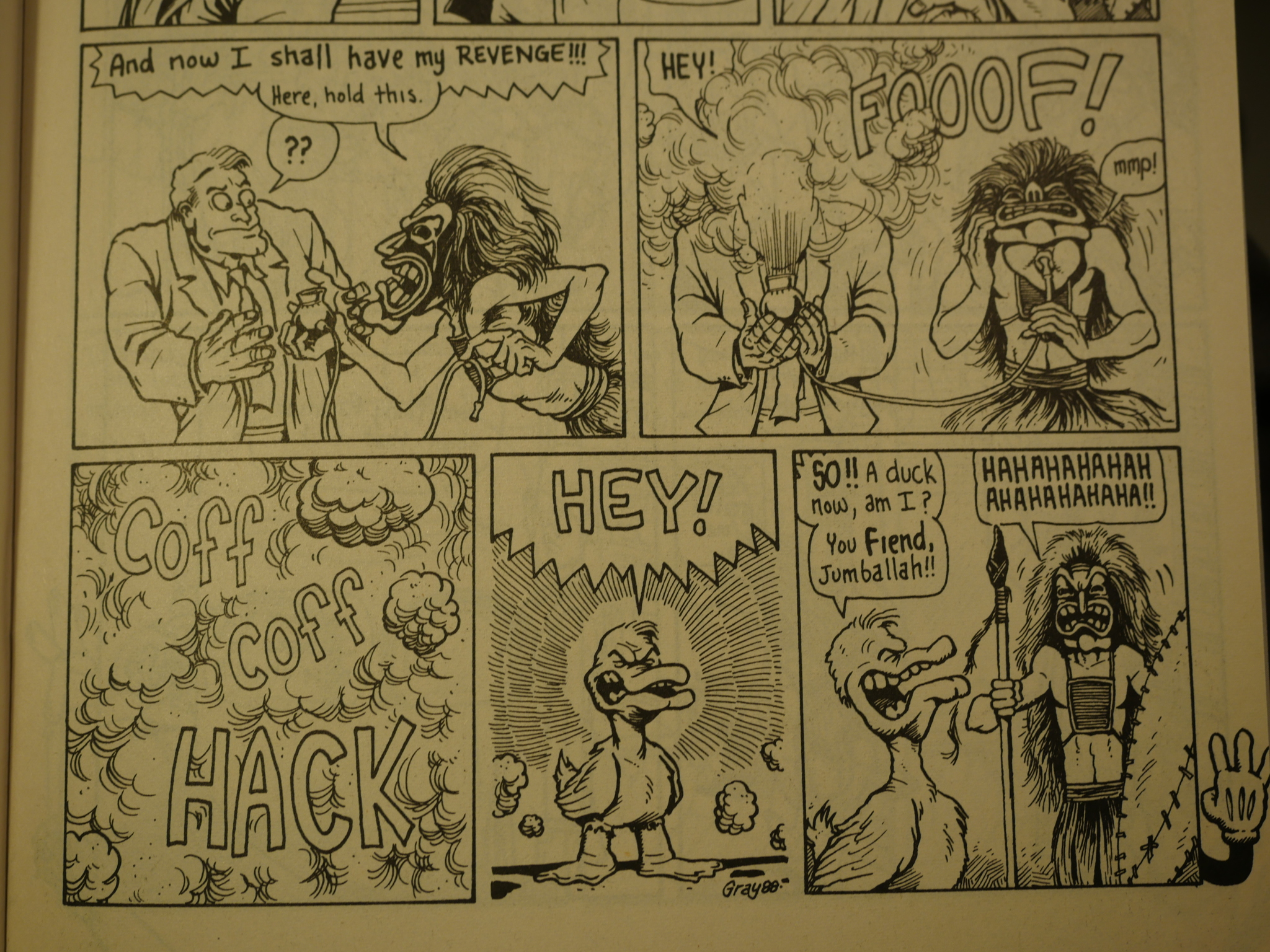 The Eye of Mongombo is a pretty funny comic book about that archaeologist up there (transformed into a duck) who looks for a treasure in South America. Hijinx ensue. A lot.

I find myself without a lot to say about this book. I didn’t read it back then, so this is my first time reading it. It’s fine, I guess? It’s consistently amusing, but somehow it just didn’t quite connect with me. Perhaps the slightly basic artwork has something to do with it… 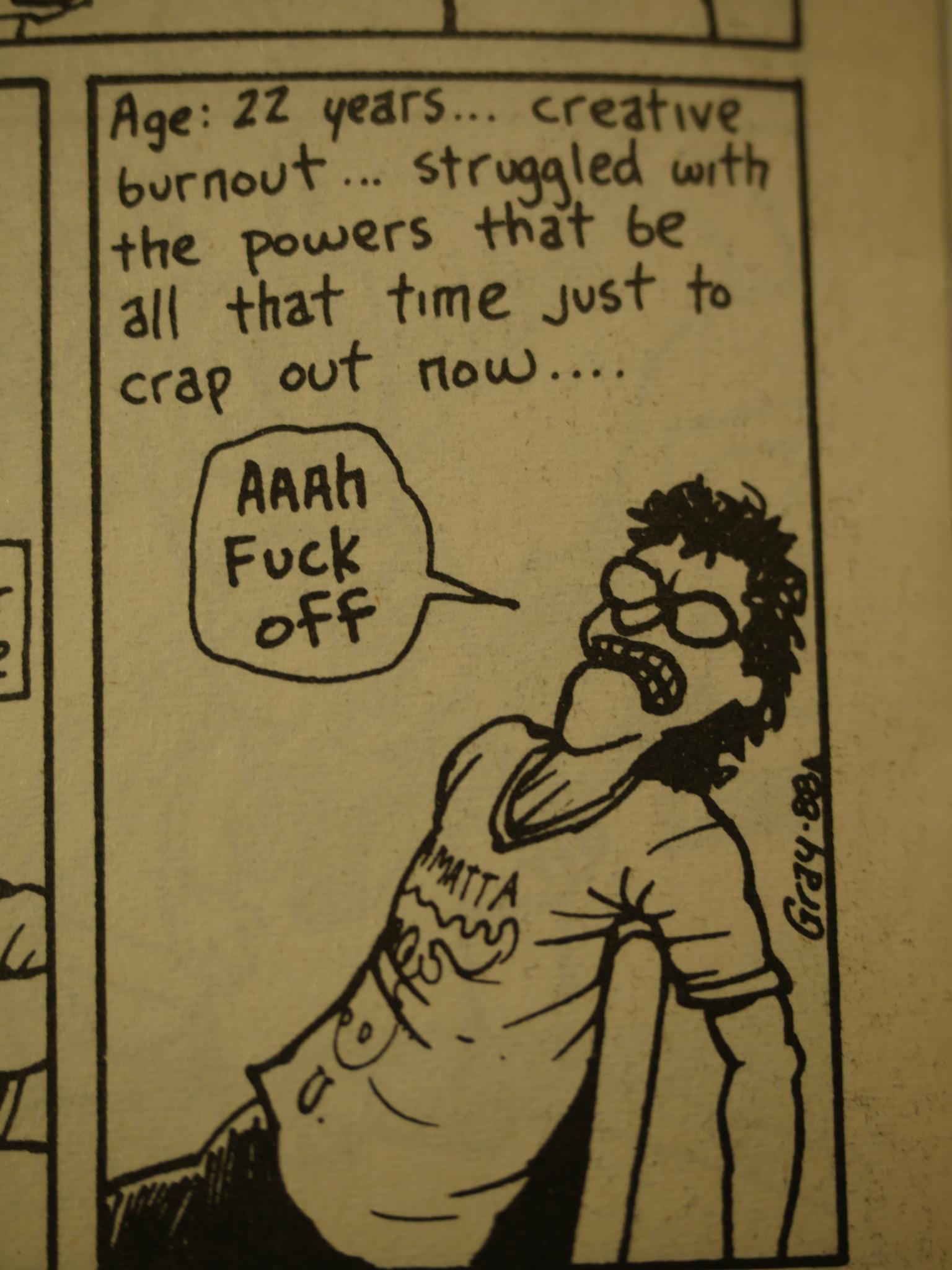 There’s a few backup stories starring the artist himself. 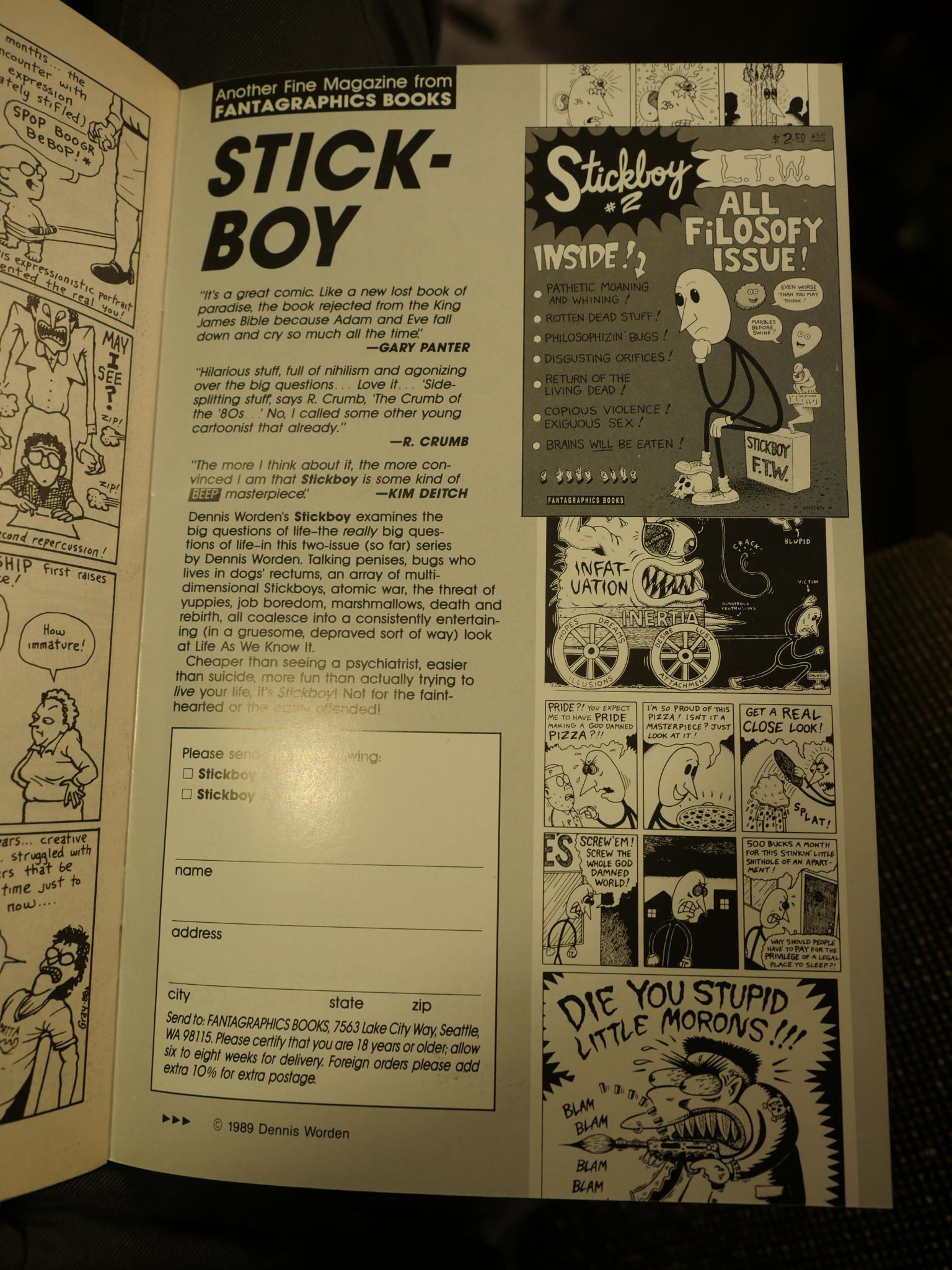 Hm, I’ve been meaning to mention that I kinda like these Fantagraphics house ads, and perhaps this is the right place to twaddle on about it for a bit.

I think looking at a cover of a comic book is a pretty useless way of determining whether I want to read something or not. Which is why it’s so frustrating that so many ads and shopping web sites only display the cover and none of the interiors.

I can take a half second look at a page and see whether it appeals to me; whether it’s something that will be enjoyable to spend some time with. At least on a page-by-page basis. I won’t have any idea whether the story is stupid or not.

But looking at a cover tells me nothing. Some people who do great covers do lousy storytelling and vice versa. Even people who do astounding pages (like, say, Carl Barks) can do “just good” covers (perhaps because his covers were due a lot more editorial scrutiny than his stories)?

Somebody who does this right is Spit and a Half. John Porcellino shows us a couple of pages from each book, and that makes it such a joy to shop from him. I’ll just open a gazillion tab with books from his catalogue, and *click page* *stare a millisecond* *click buy* (or not) *close tab*. It’s just perfect. And I don’t understand why other web sites don’t follow that format. 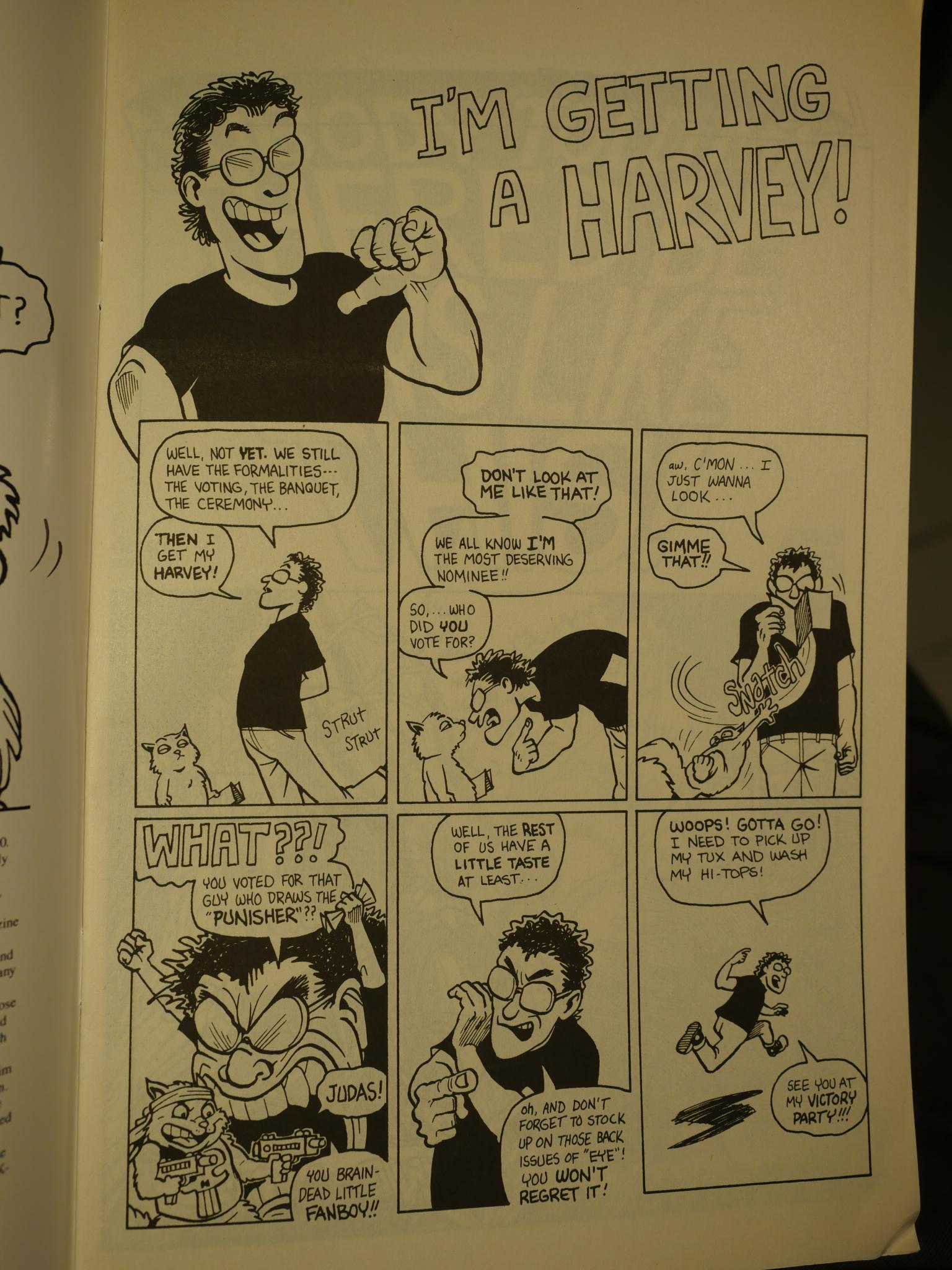 The Eye of Mongombo was apparently nominated for a Harvey award? It didn’t win. 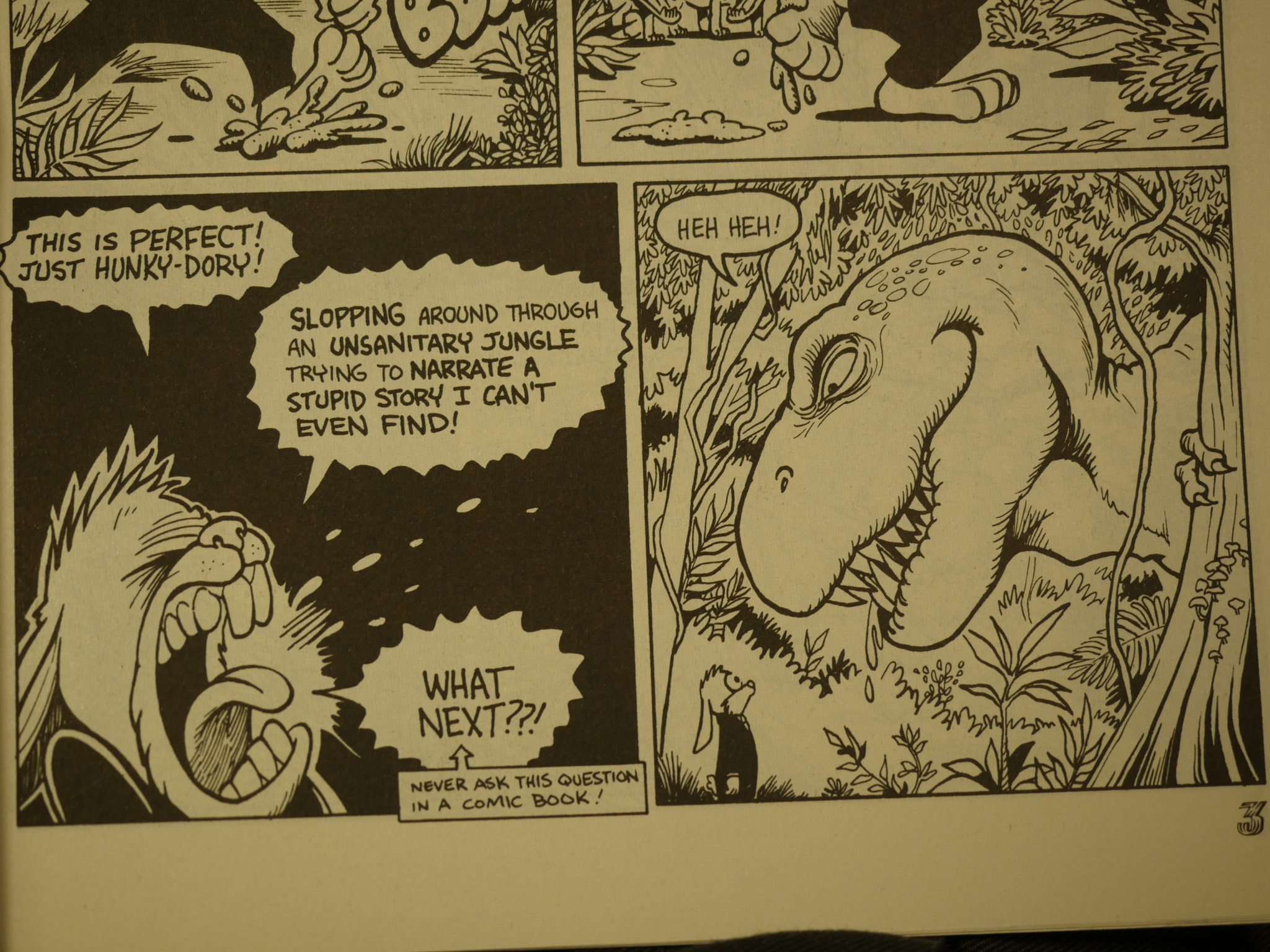 This series was announced to be lasting ten issues, but no further issues were published after number seven. It didn’t mention that it was the last one.

And I think the storyline had stalled slightly. I mean, it’s a parody adventure, but having the storyline advance a bit would be nice. Instead we spend one whole issue in a hallucination, and then a lot of new characters, like this bunny narrator, are introduced.

But it seems to be a comic book that is fondly remembered: It pops up in surveys like this now and again.

Doug Gray doesn’t seem to have published any comic books after this one was cancelled, although he was writing for Duck Tales for a while. He seems to have been working mostly as an animator, which is a natural progression from Mongombo.