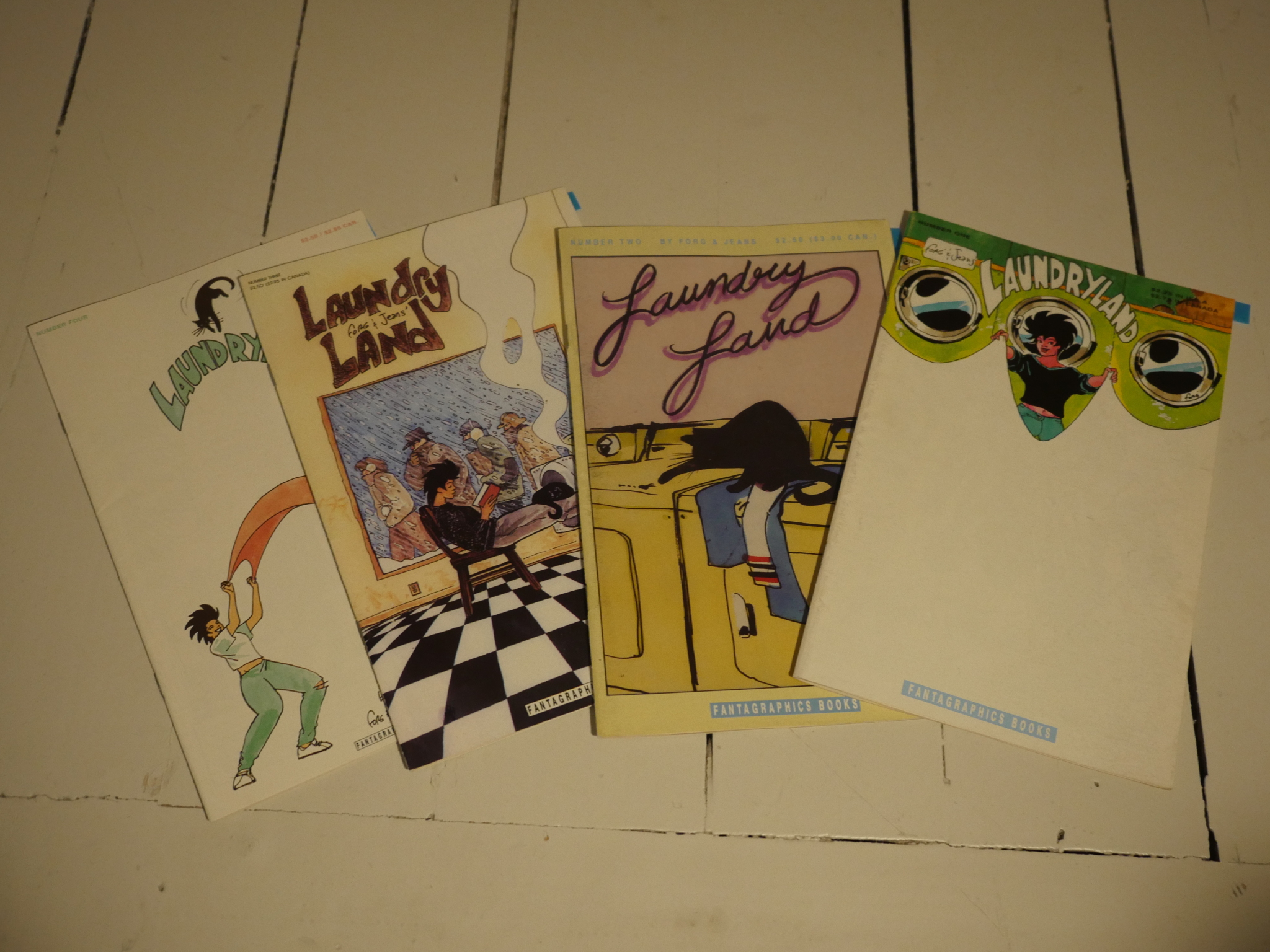 A rather mysterious comic book. There’s no introduction, no editorial text: Just the comics themselves. Is this a translated comic? Where are Forg & Jeans from? What’s going on? 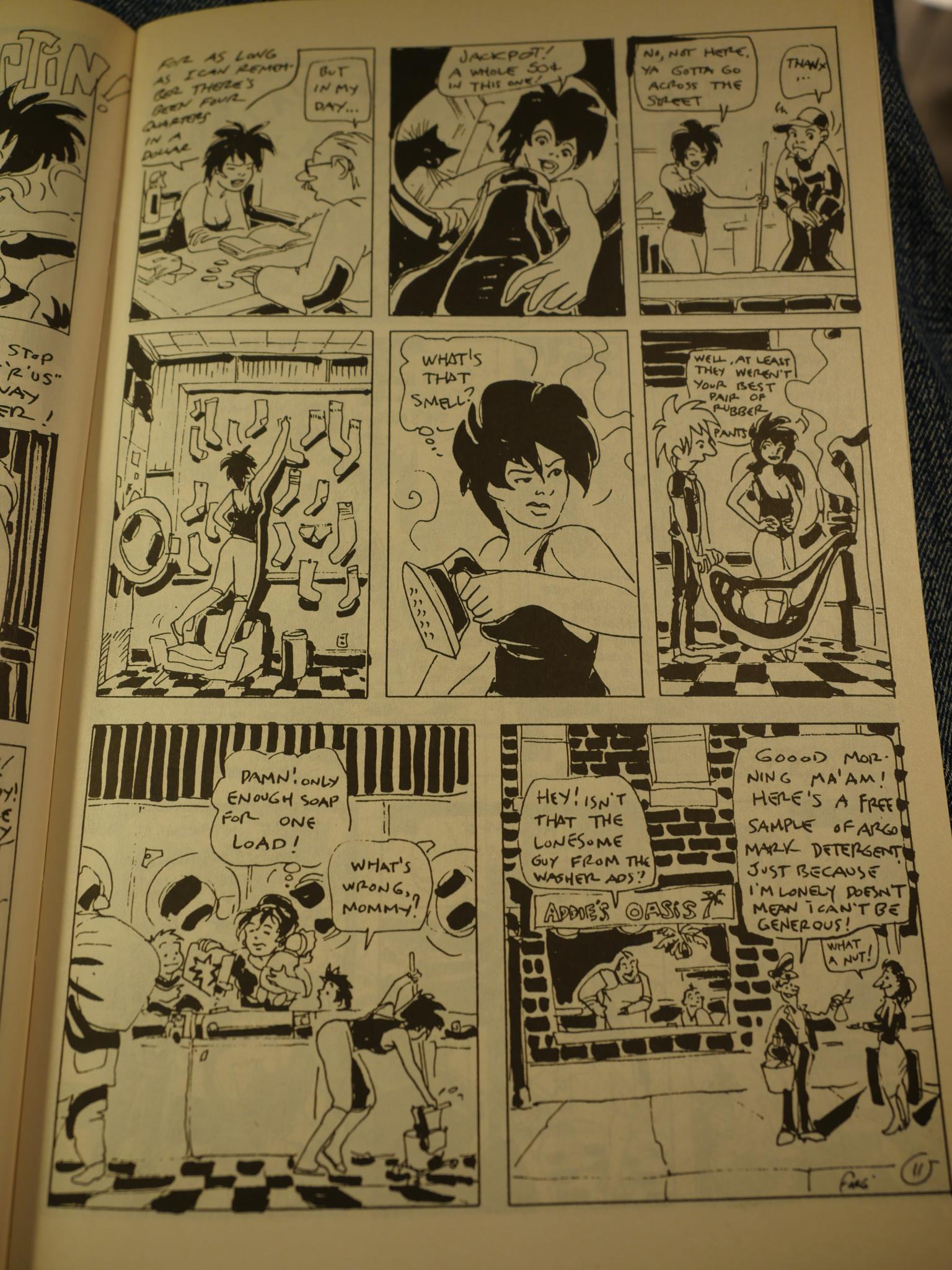 It’s about a woman who runs a laundry, and her friends. The first issue is very laid back. What happens is that she gets a house guest that she then gets rid of. It has a very appealing slice-of-life kind of atmosphere. The last three issues are more plot driven, though. 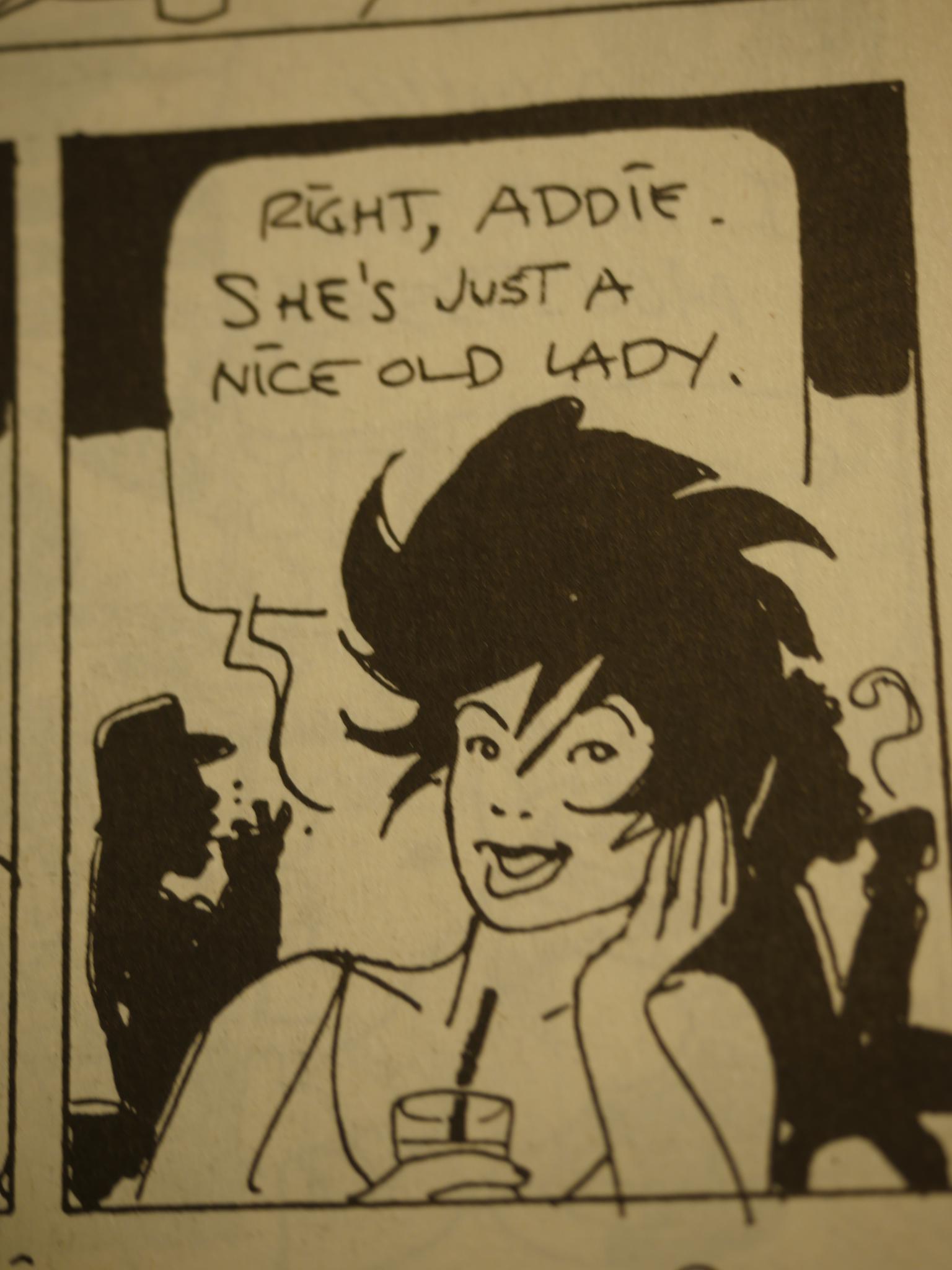 I find this style of artwork very attractive, too. It’s easy but charming. 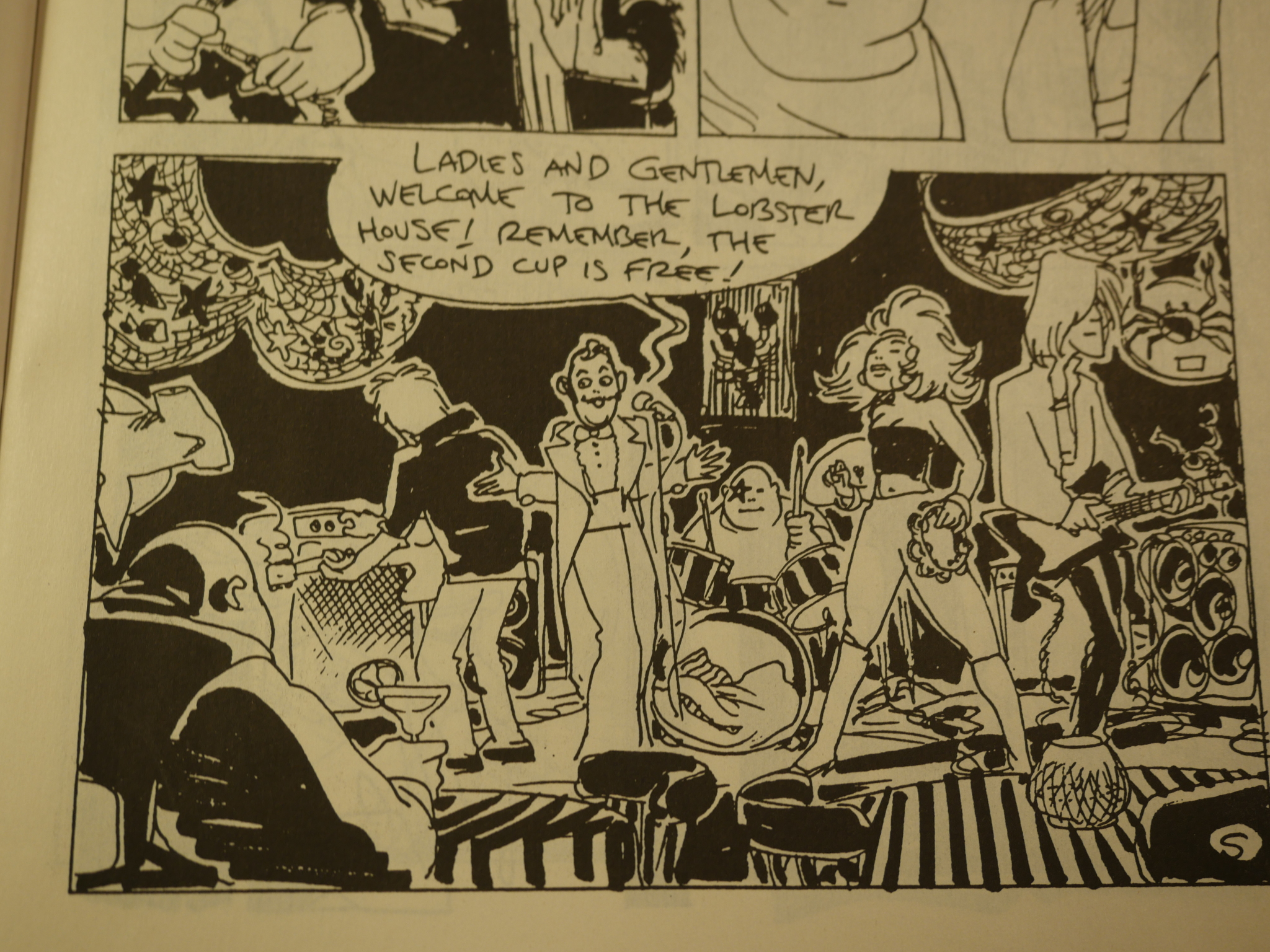 Solving the age-old “how do you draw characters against a black background?” conundrum is solved by adding a white outline outside the black outline. 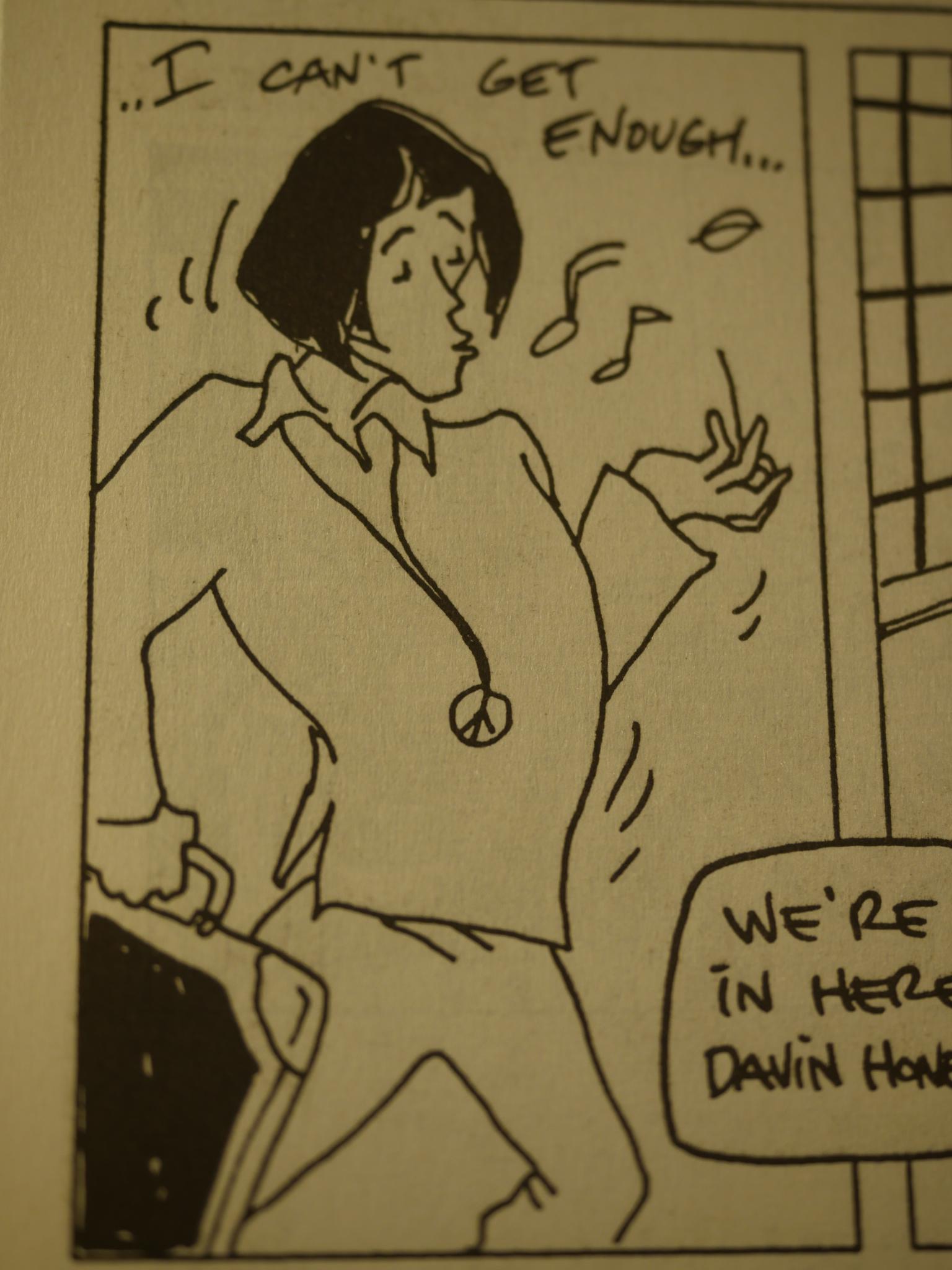 The artwork is somewhat uneven, though. The four issues were published with a nine month gap between each issue (approx.), so perhaps this wasn’t exactly the creator’s day job… 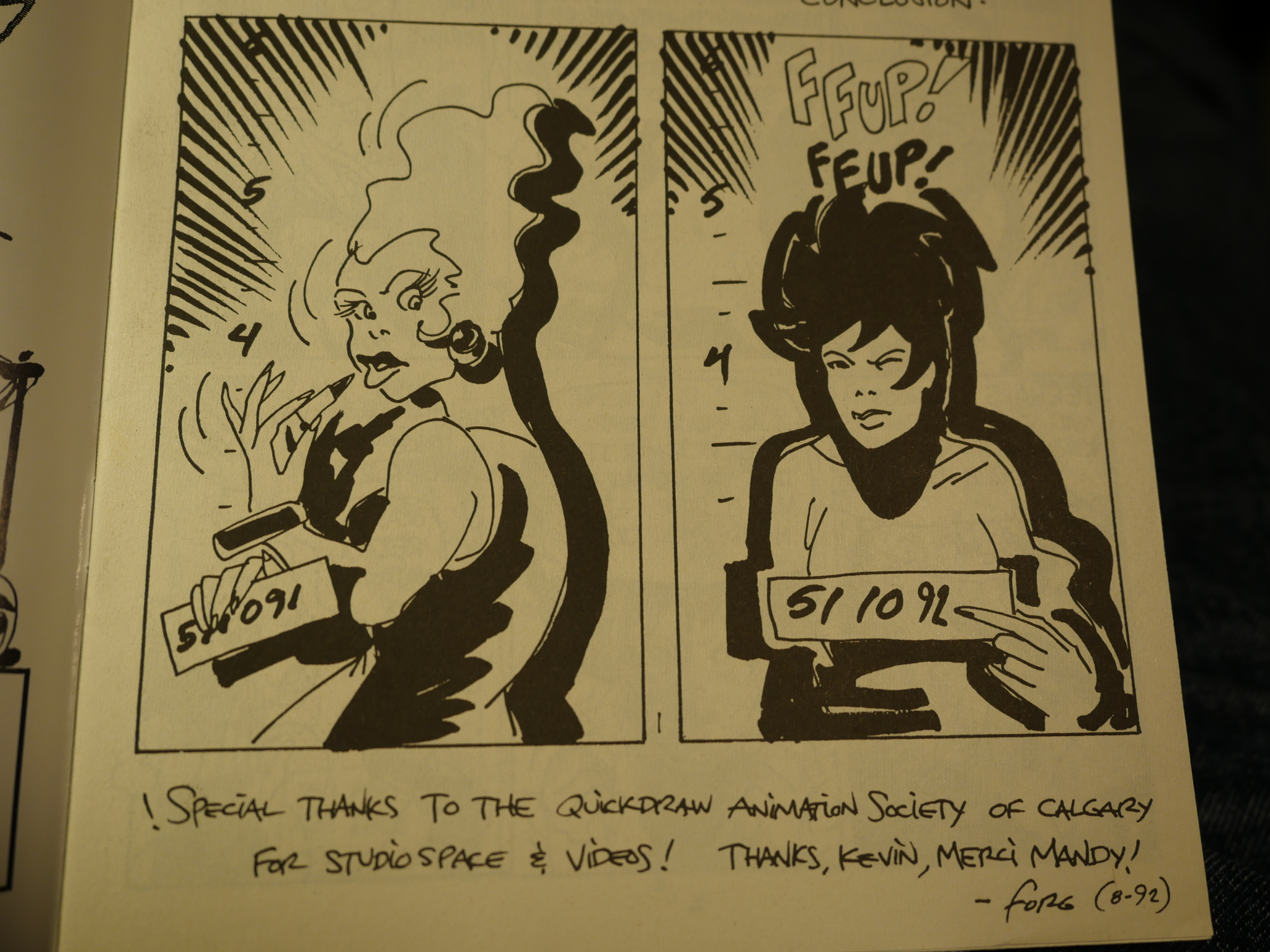 Finally! In the fourth and final issue we get a smidgen of information: The artists live in Calgary. I guessed it was Canadian, because it had that BD/US crossover synergy going on.

And that’s it. The somewhat complicated plot was even resolved in this issue. No mention of it being the last issue, of course.

I wonder whether Forg & Jeans have made anything else? This was a rather pleasant and diverting little read… They have names that are rather difficult to google. Nope. Can’t find anything other than Laundryland.

Which reminds me of this. Robert Boyd talks about survivorship bias and comics: The idea that comics artists are in it for the long run, and that it’s something unique for the art form. Some are, but they are the minority. Writing this series of articles has really driven home the point of how prevalent dropping out is.

The typical arc of an alternative comic book creator is 1) appearing in a few anthologies and self-published minis, before 2) Fantagraphics publishes three issues of your comic before cancelling it due to low sales, and then 3a) publishing one more issue via Neverheardof Comics or 3c) never publish anything again.

A fair number end up in adjacent industries that actually pay money, like magazine illustration or animation, but most just seem to get a normal day job and give up on the entire thing.