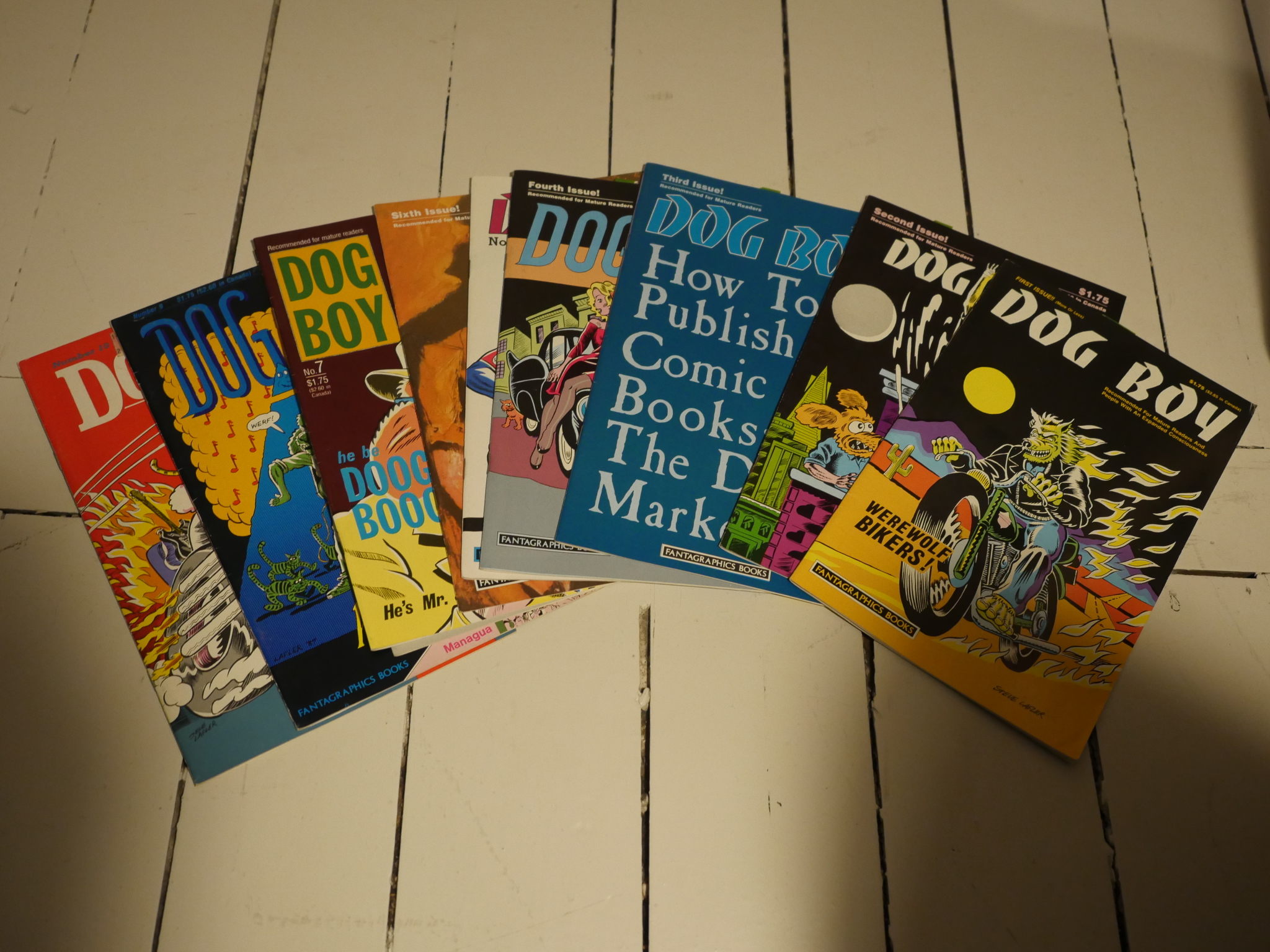 Lafler had (self-published, I think?) Dog Boy under the Cat-Head Comics moniker for a few years, but moved to Fantagraphics in 1987, and restarted the numbering.

I didn’t read Dog Boy back in the 80s. That is, I had the first issue, and I vaguely remember being vaguely puzzled. Vaguely. I liked serious comics, and I liked funny comics, and I loathed “spiritual” stuff, and I can see why I wouldn’t find Dog Boy appealing.

But I got all the issues now, so let’s read. 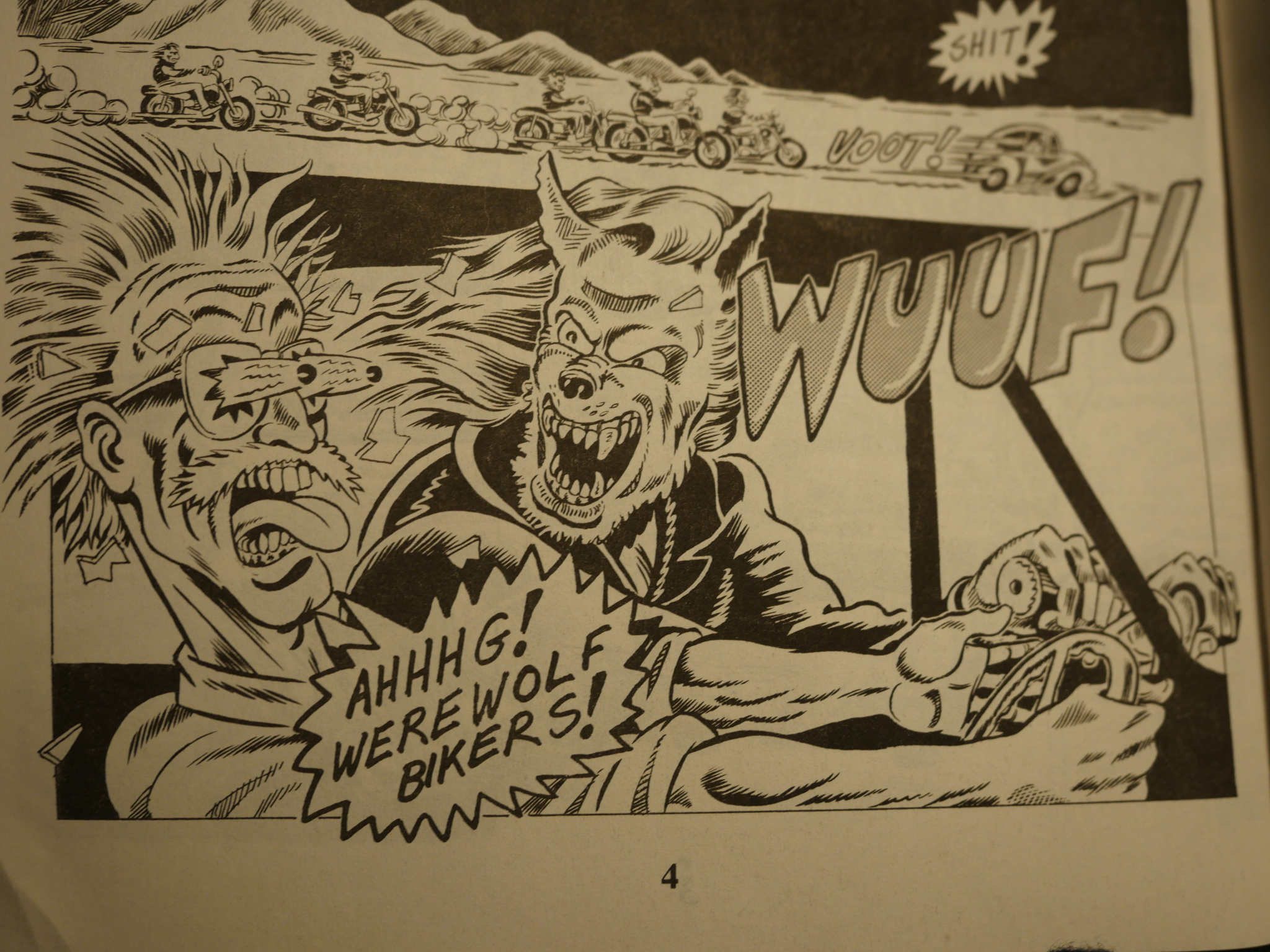 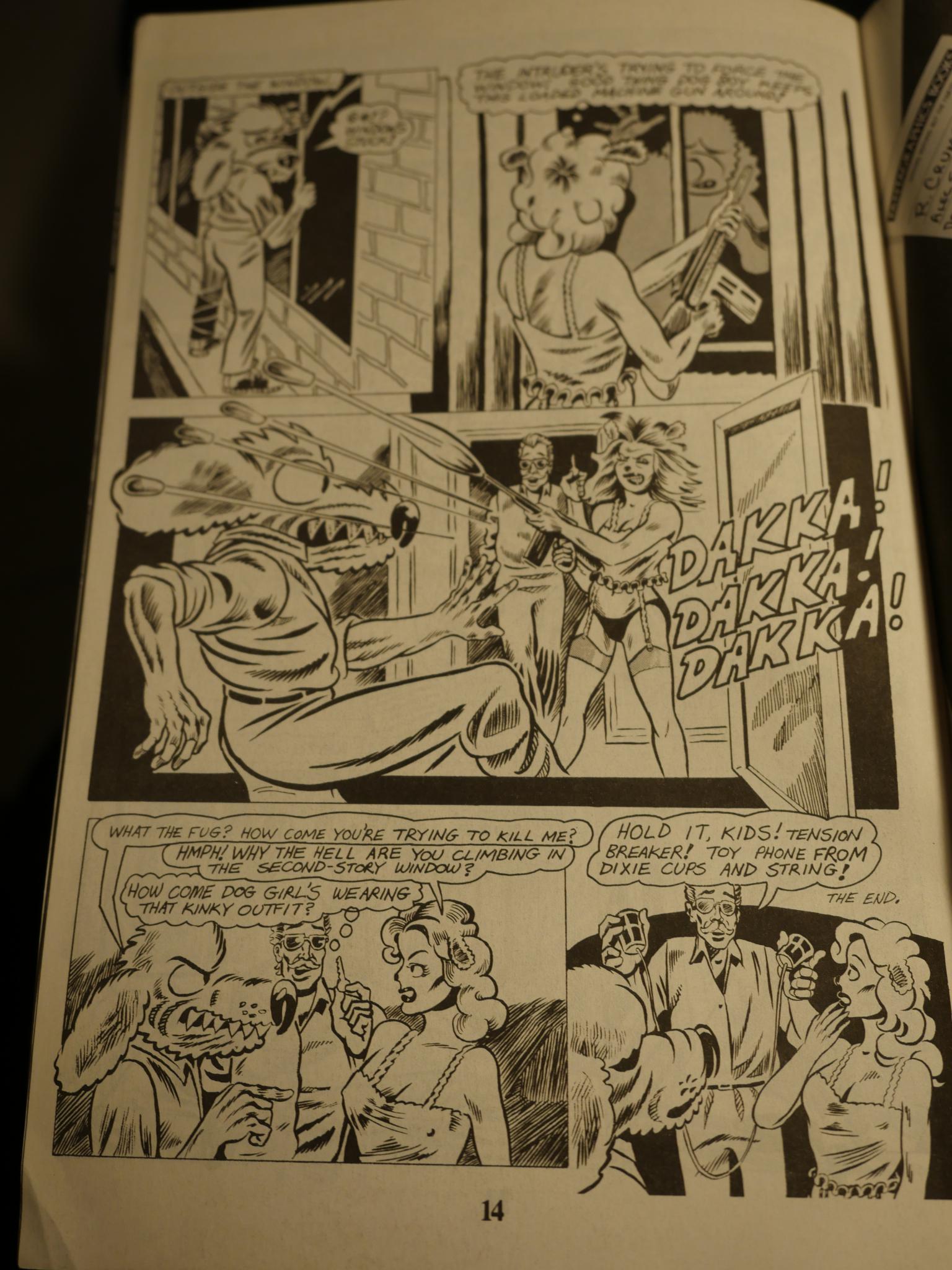 This page is rather representative. Dog Girl has a machine gun, Dog Boy tries to break in, violence ensues, and then you have a non sequitur. It’s amusing… The Dixie cup telephone is Zippy-ish, but the violence isn’t. It’s a bratty, drunken, druggy update on 60s underground tropes, I think?

I kinda like the tension between the cartoony Dog Boy head and the more non-cartoony figure work. 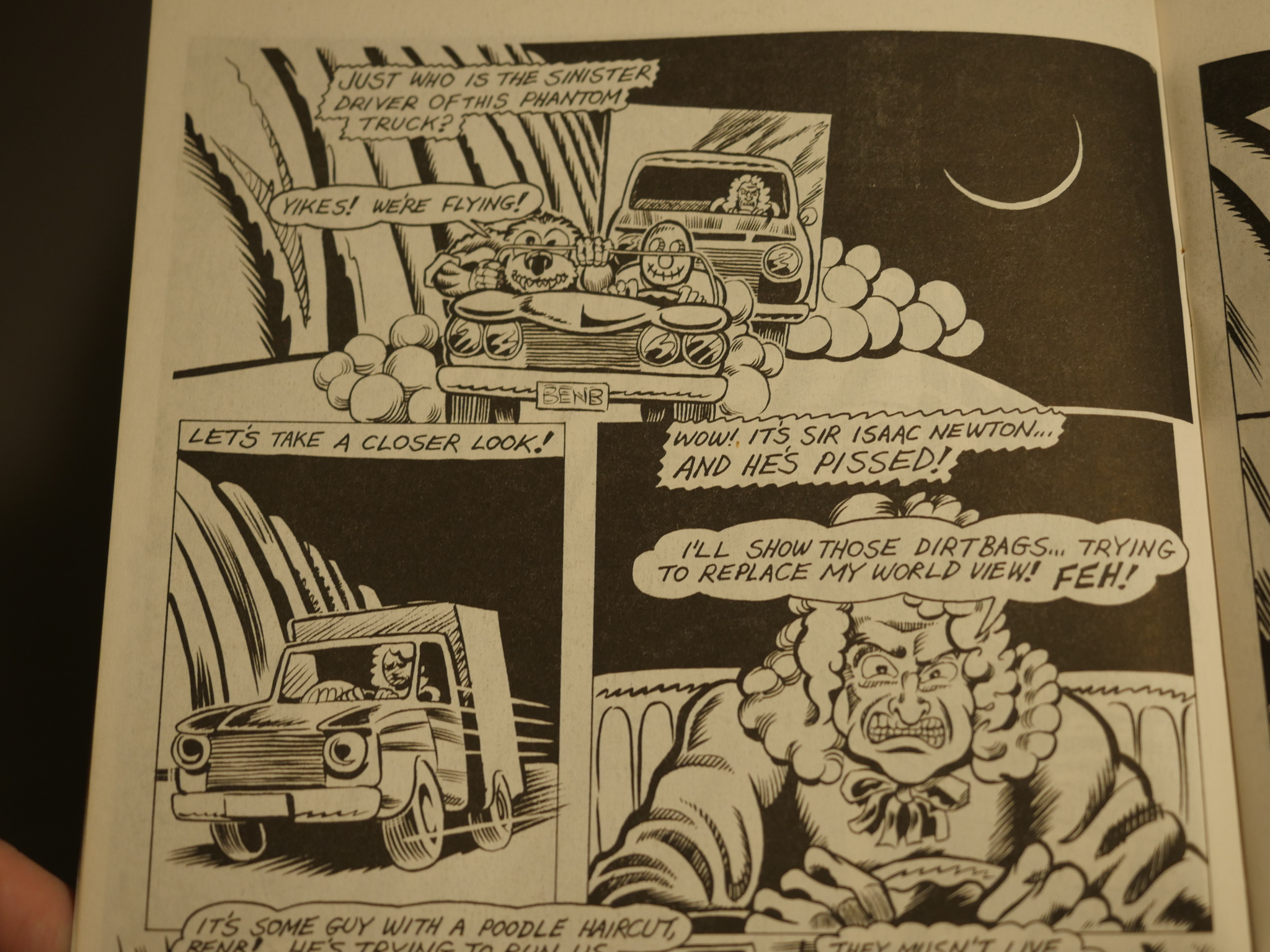 That is pretty funny, I have to admit. But vaguely. I only admit it vaguely. 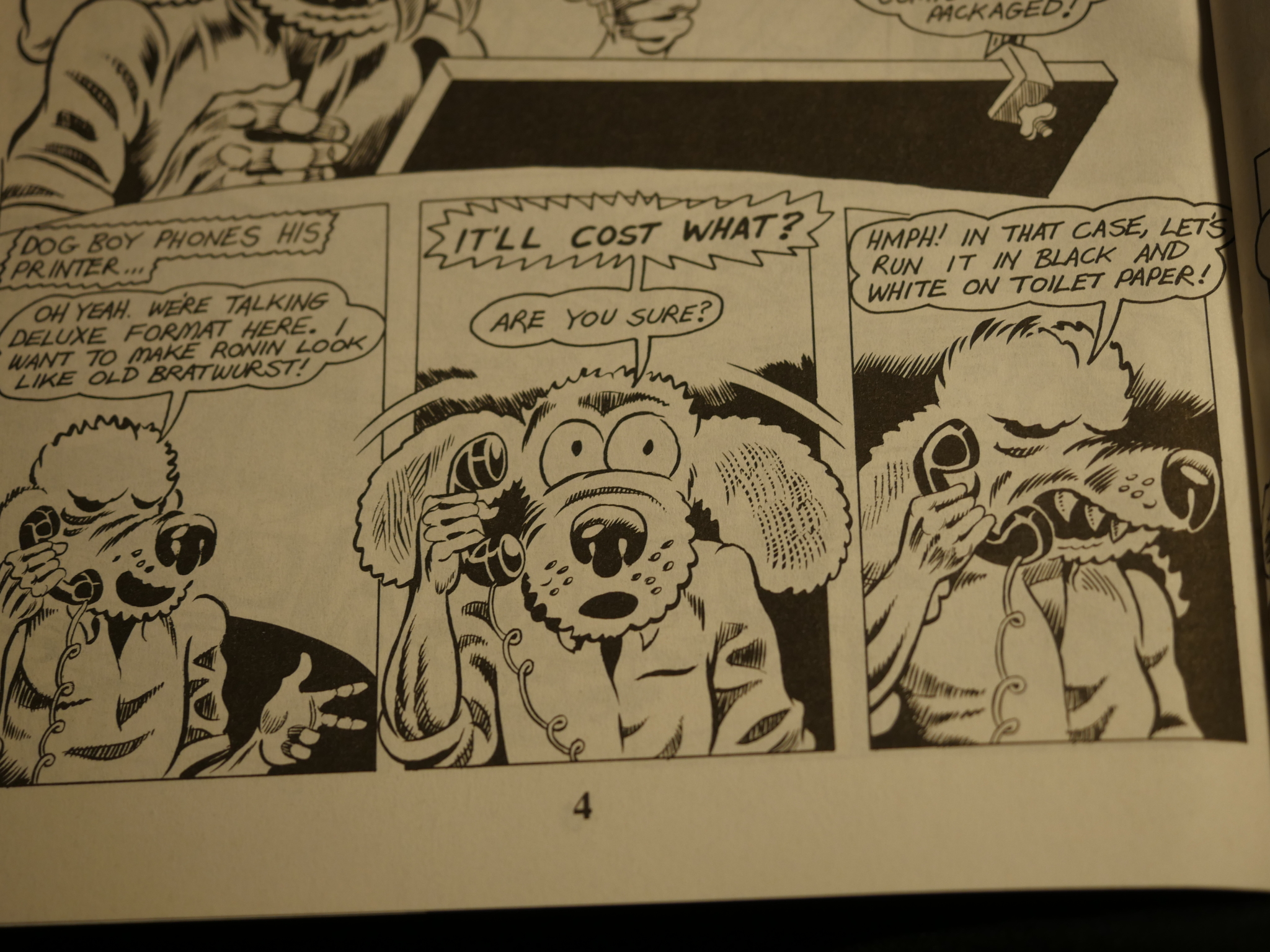 The third issue is the “How To Publish Comics Books: The Direct Market.” issue. It’s mostly just jokes about Dog Boy wanting to start his own comic book, but there’s one pretty incongruous page: 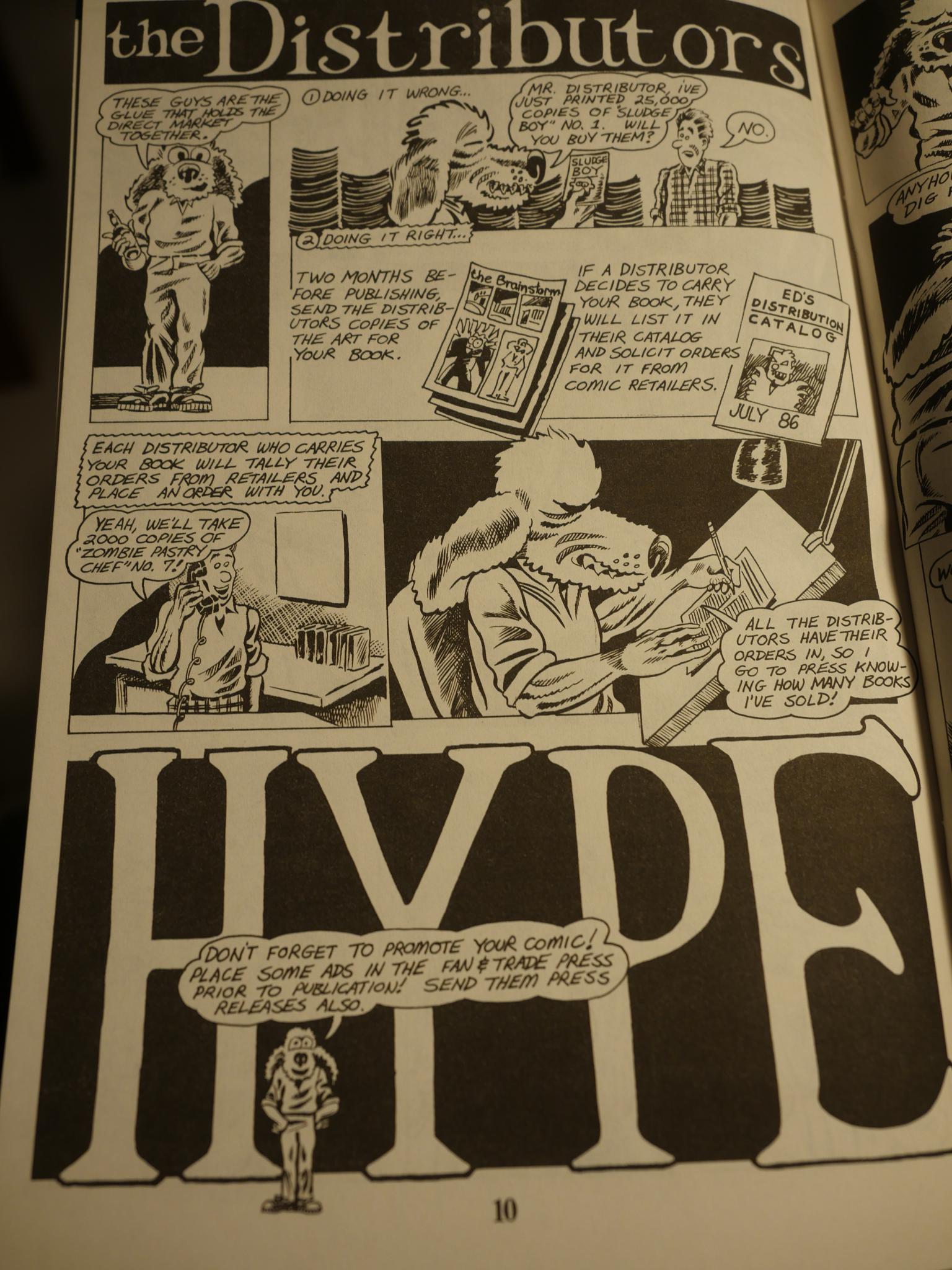 That sounds like actual advice. Reading Dog Boy I get the feeling that he has less of a plan on how a story is going to unfold than most cartoonists. 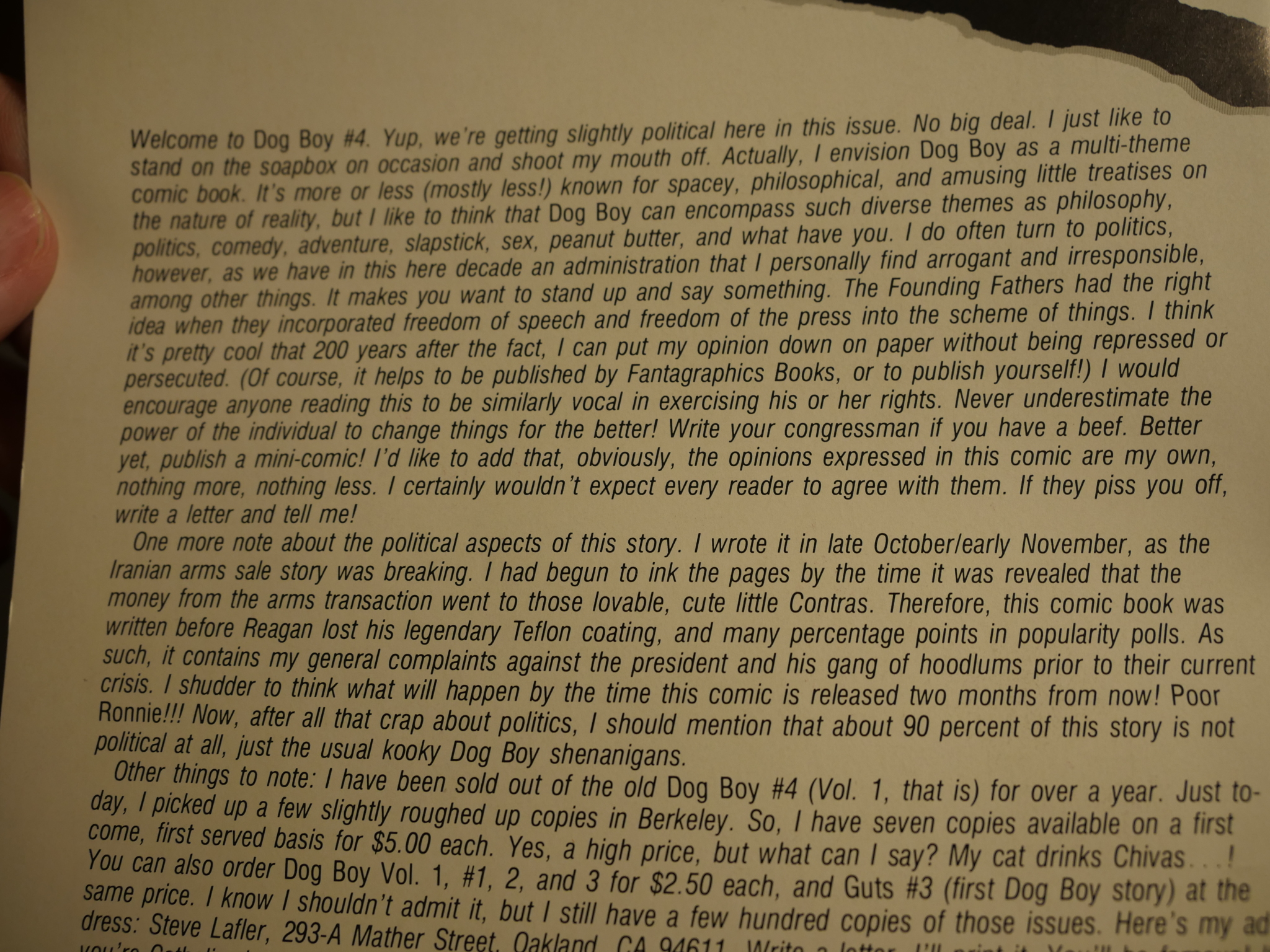 Lafler vaguely apologises for getting very political this issue, but I think there’s like three pages of overtly political stuff here, and the rest is the normal goofiness. 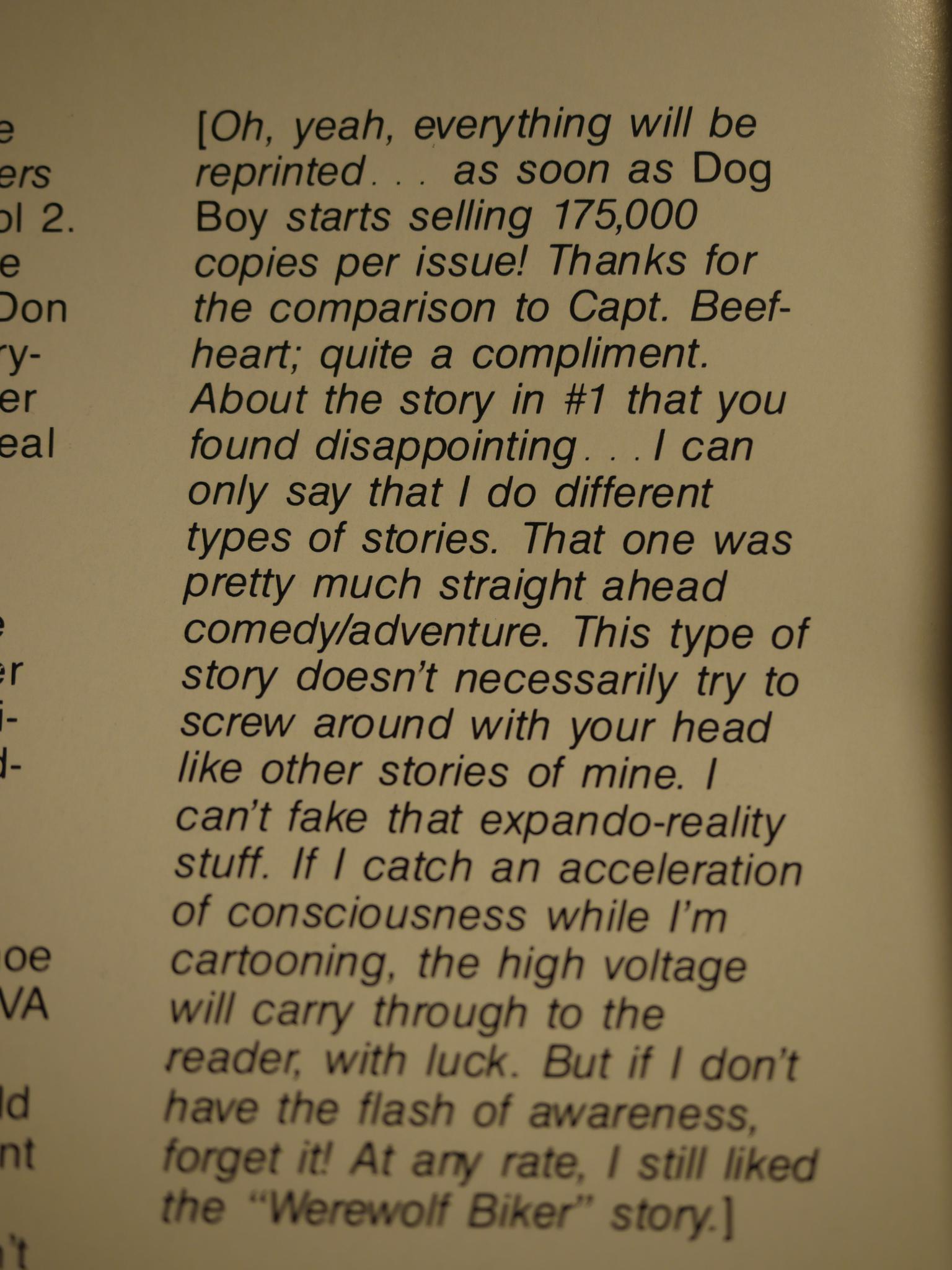 Lafler explains his technique, and I think he was accelerated here: 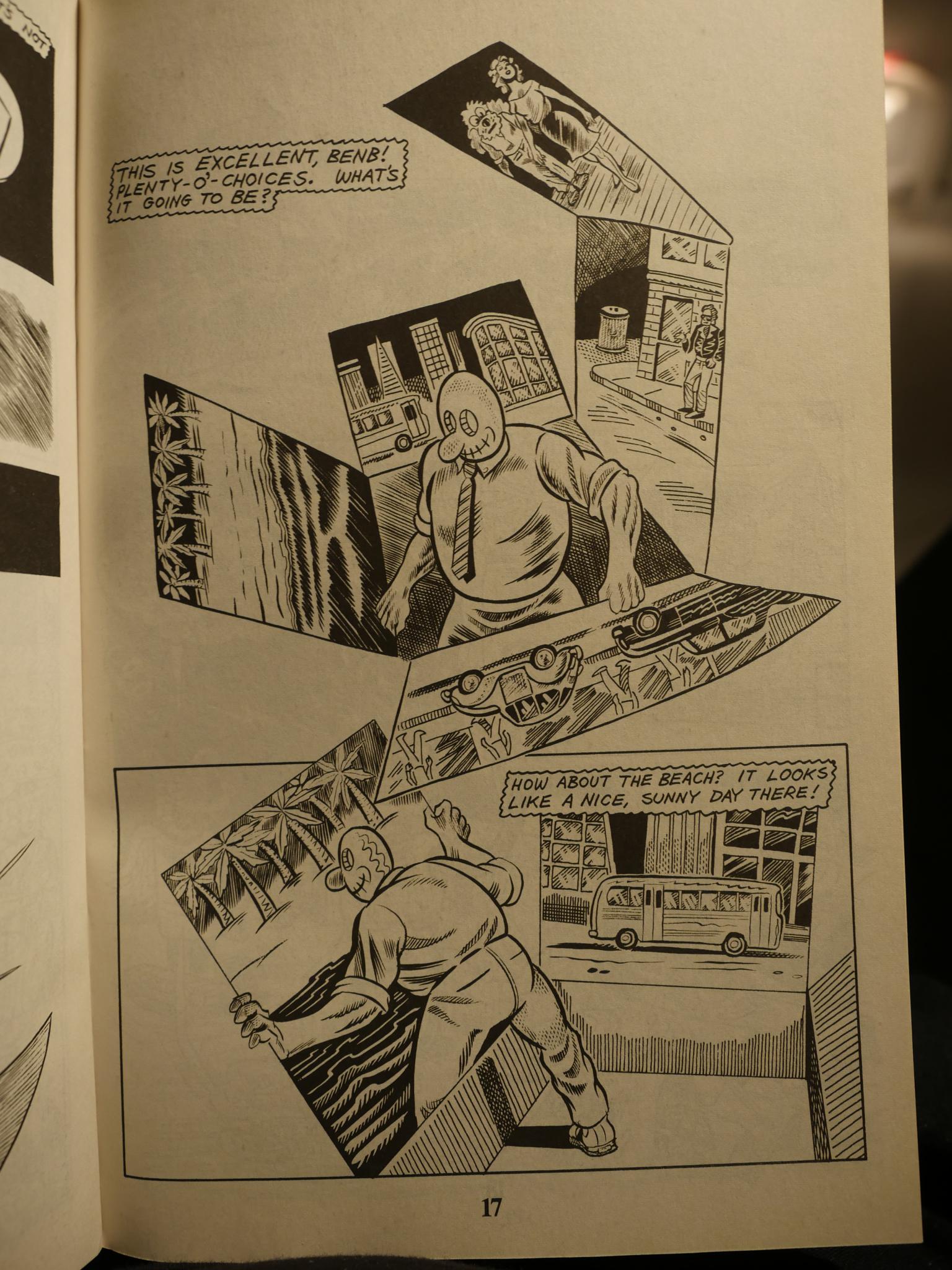 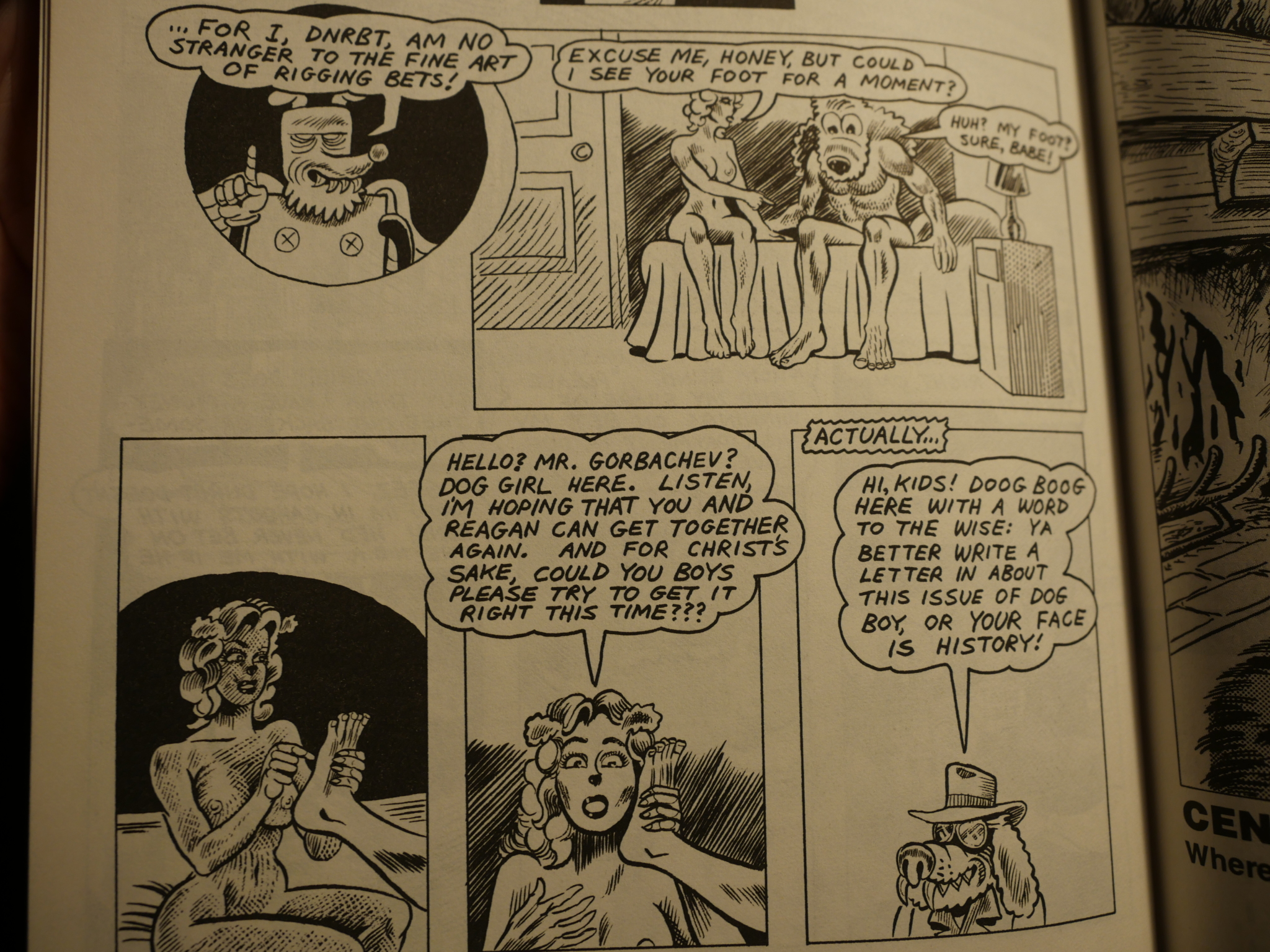 And very political, too! 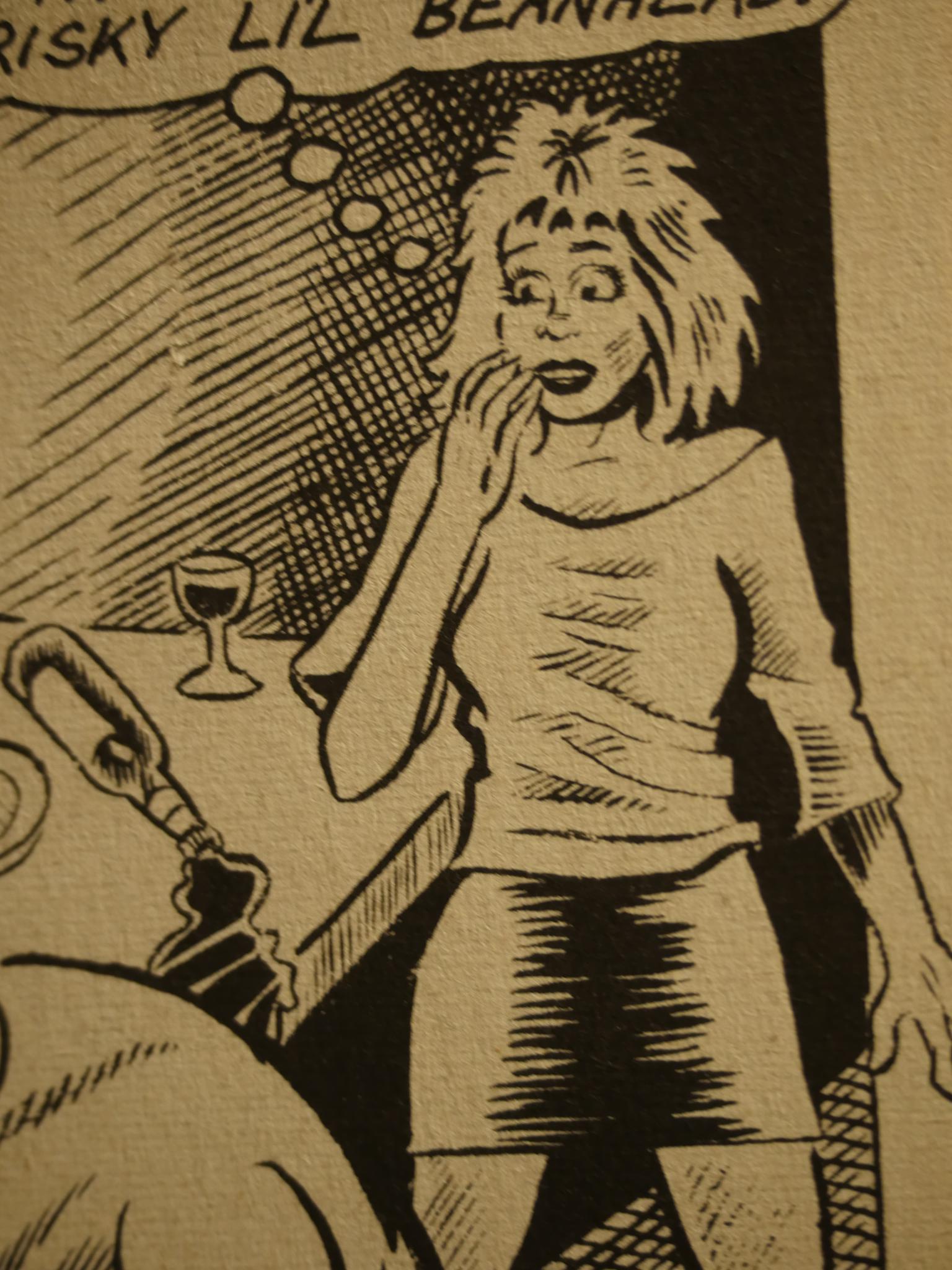 I’ve been wondering who Lafler’s art reminds me of, but I haven’t quite been able to put my finger on it. But this drawing from a late issue, at least, looks quite a bit like Kim Deitch…

After ten issues, Dog Boy was cancelled due to low sales. Lafler has continued to do comics, and is still active today.