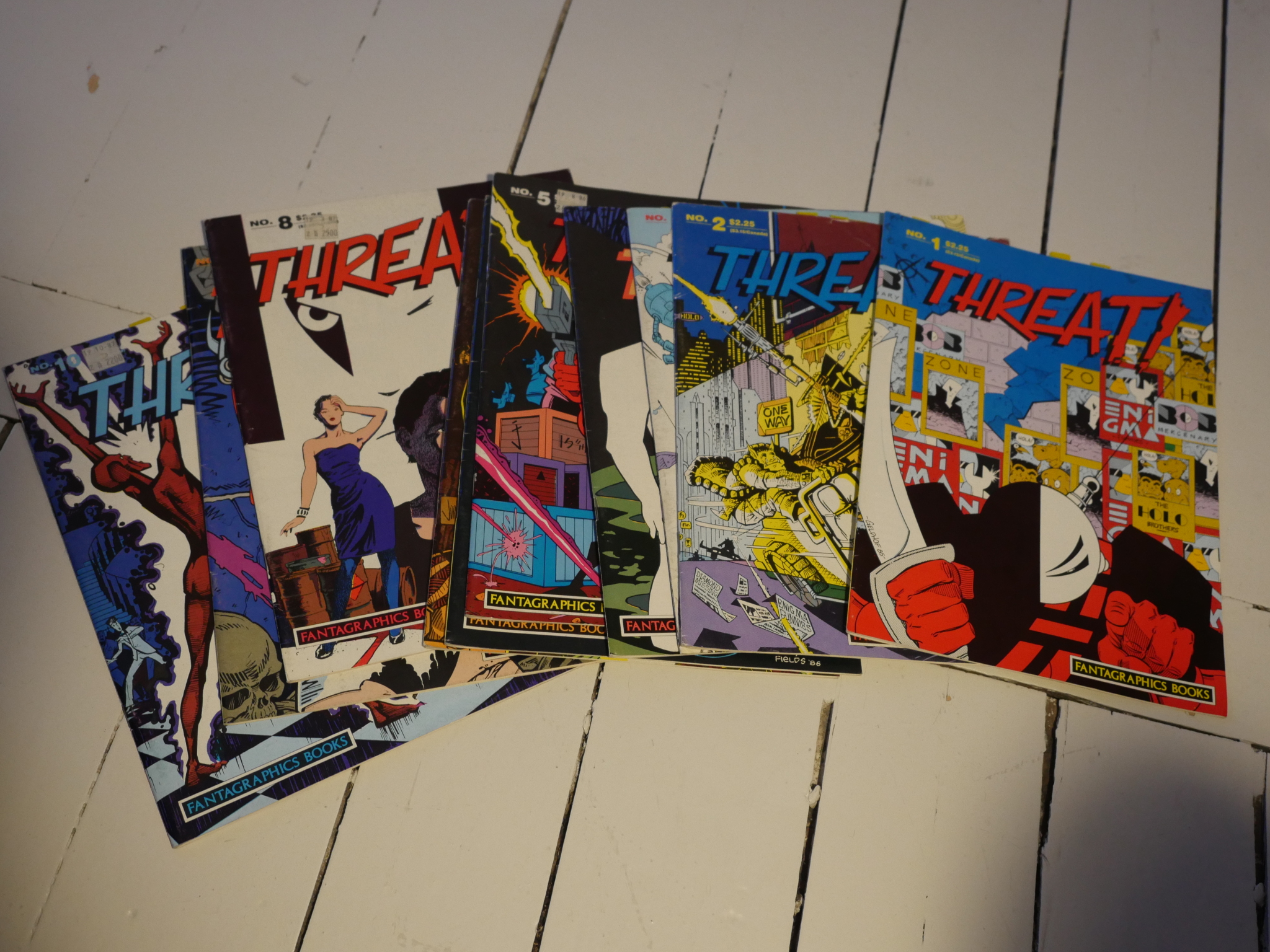 Anthologies usually do not have a set roster of contributors. There are some, like Zap Comix, but it’s usually a revolving door sort of thing.

Threat! was a 32 page, magazine size, monthly anthology with four running serials, each taking up eight (or fewer) pages, and didn’t deviate (much) from that format until the last issue, when one series dropped out. 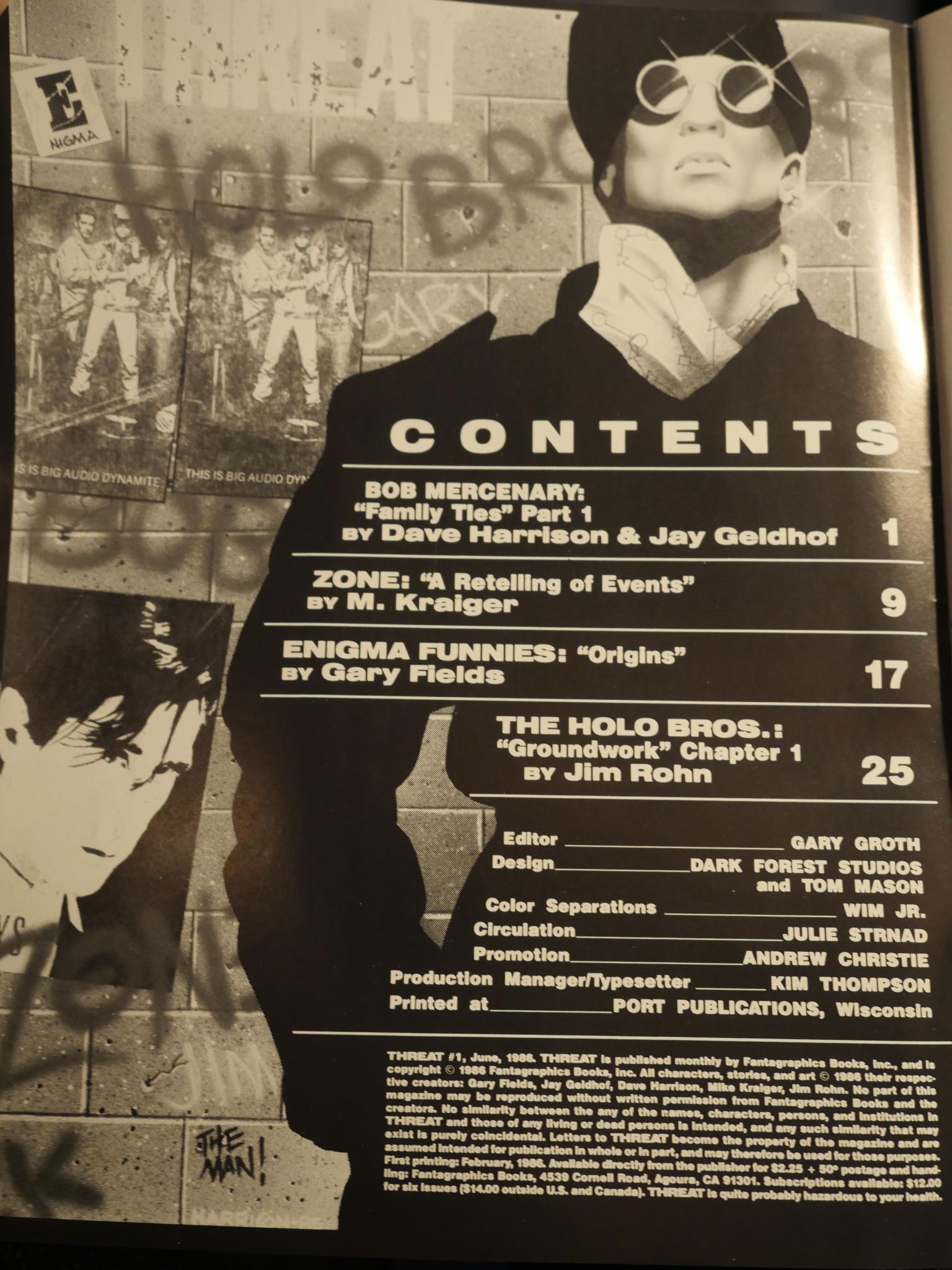 Well, it’s the mid 80s, and anybody who doubts it can just gaze and ponder the design of this contents page. Man, that’s so 80s. 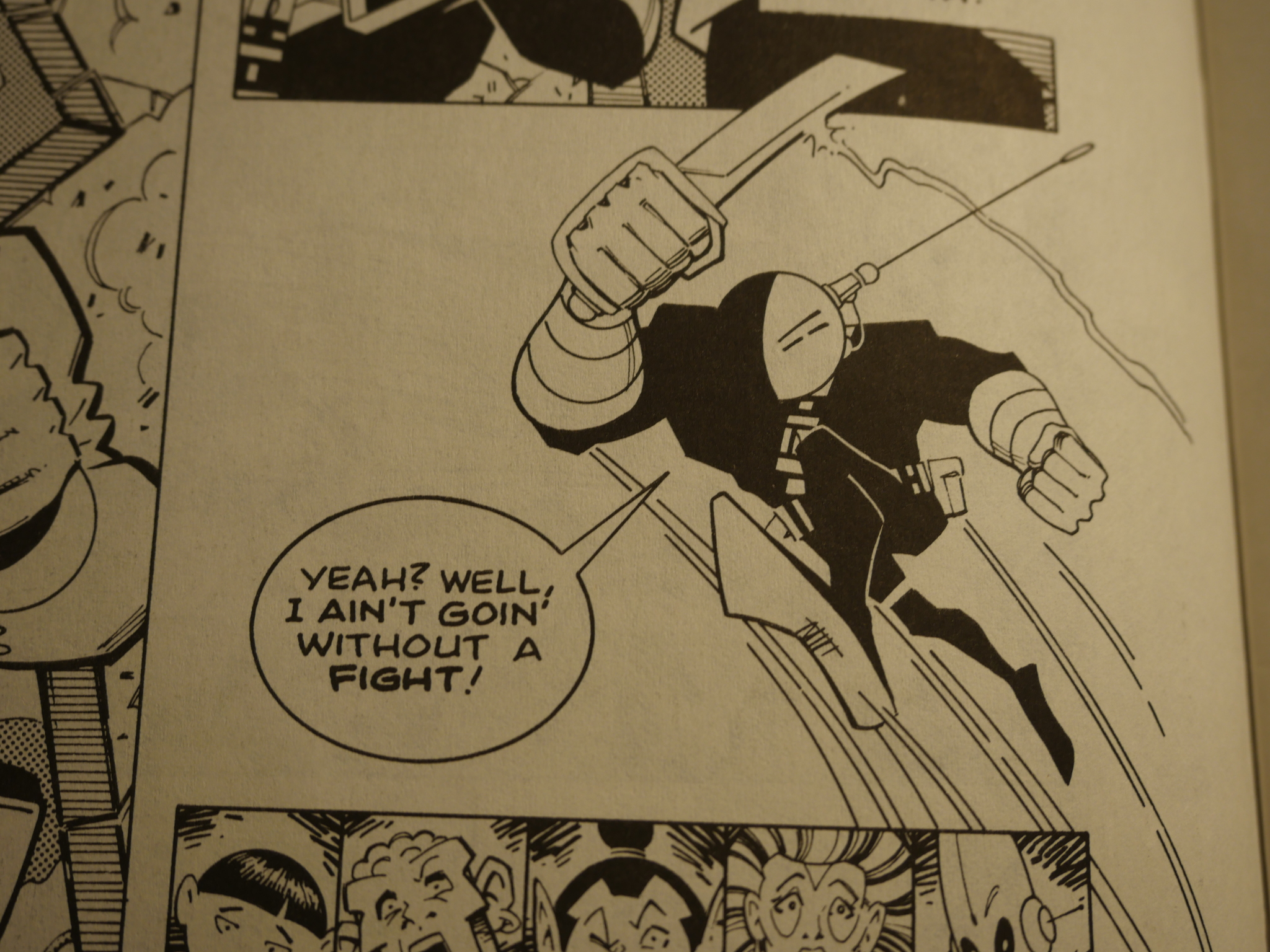 Anyway, the first series is about Bob Mercenary, a … mercenary with a very geometric head. 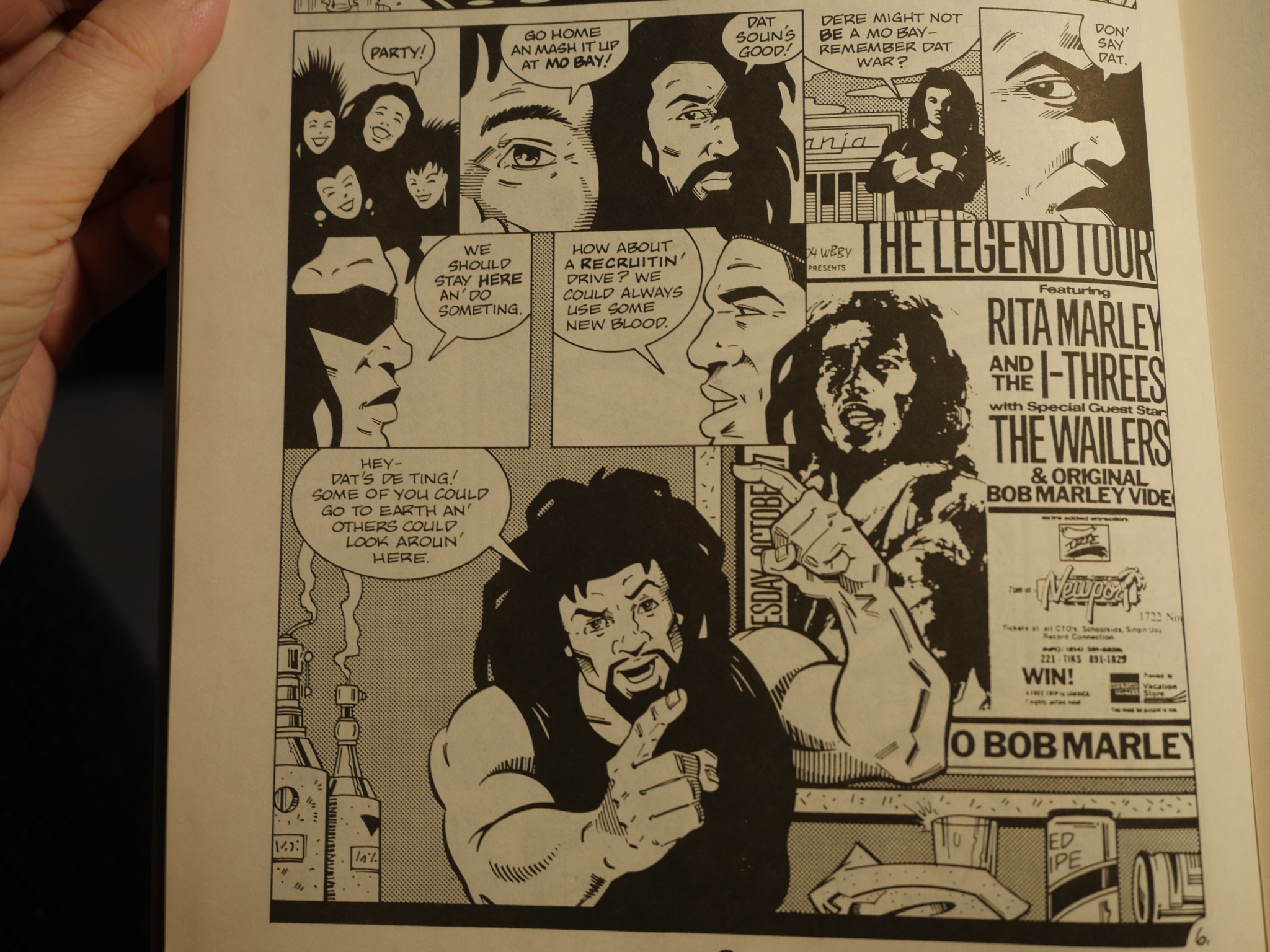 Apparently he lives on the planet of Jah. It’s a sci-fi action adventure type of thing… 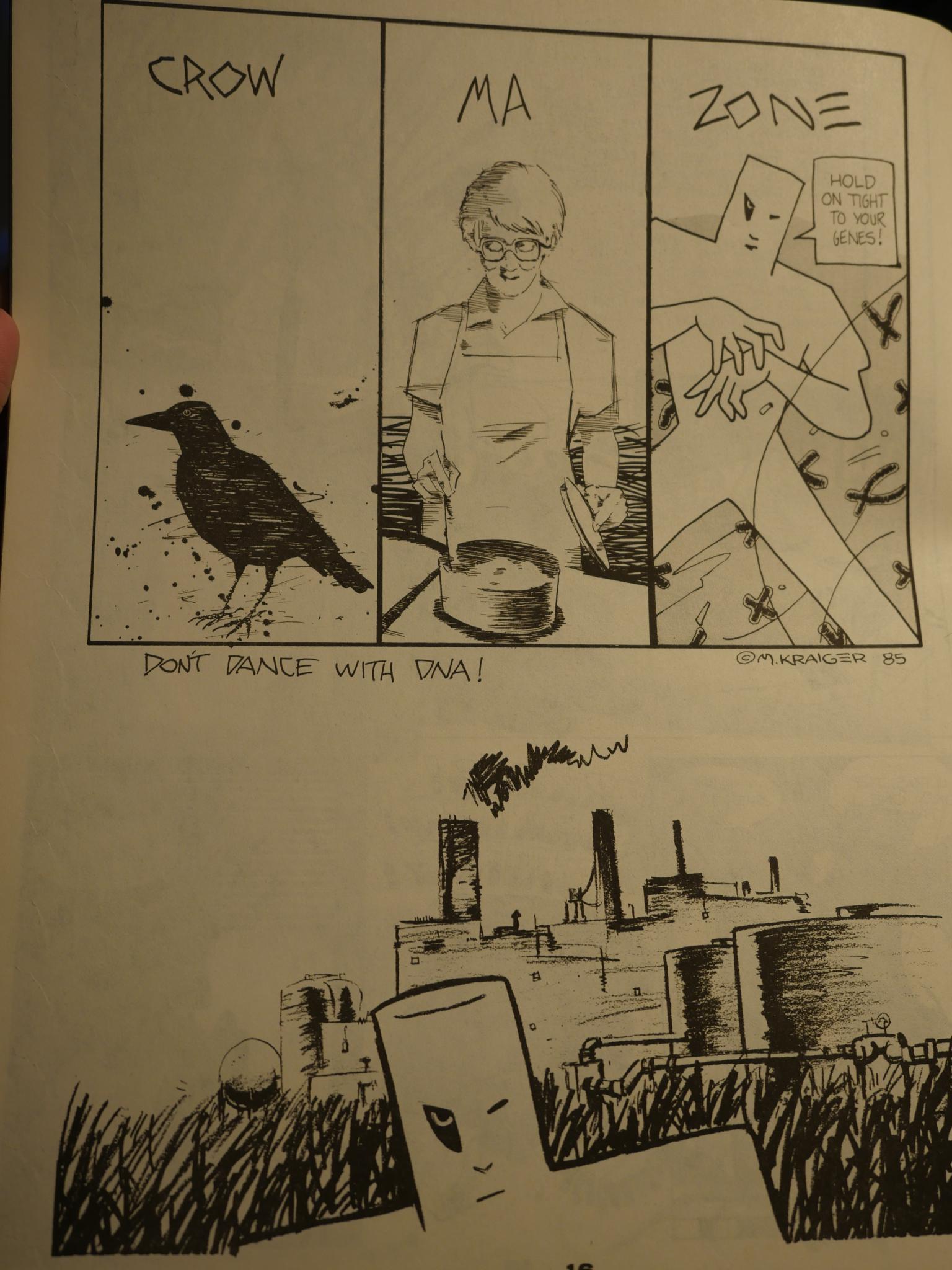 Zone is the second series, and also has a very geometric protagonist. By M. Kraiger. Very mysterious. The story never develops a lot, but it’s about a guy? Who fell into a radioactive swamp? And became, no, not that guy, but this guy? Yeah, it didn’t make much sense, but some of the pages look rather pretty, like the one above. 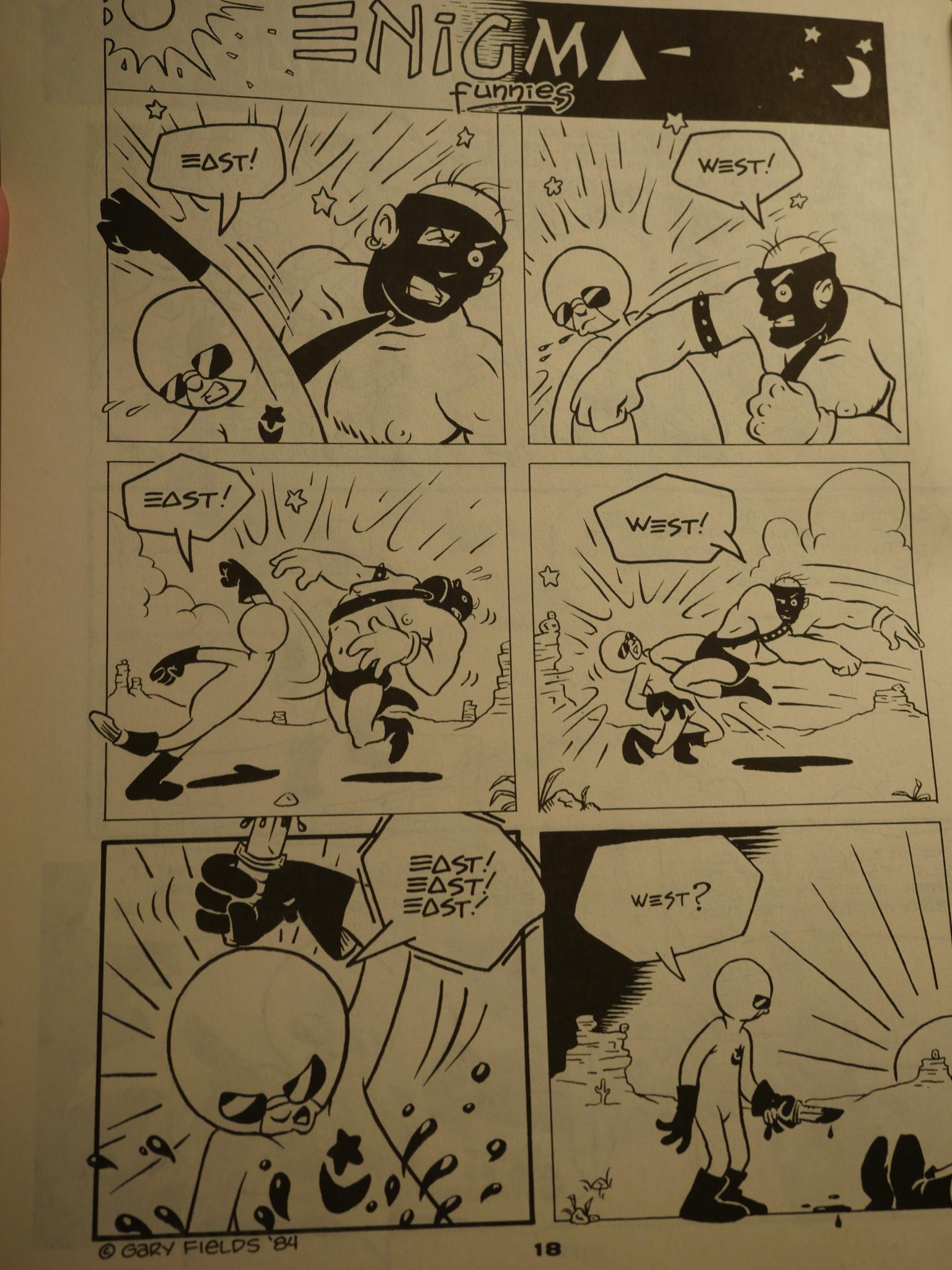 Gary Field’s Enigma Funnies has a hero with a very geometric head (I sense a theme! Is this the theme that binds these stories together? Geometric heads?) who roams a post-apocalyptic landscape and kills mutants. (See above.) 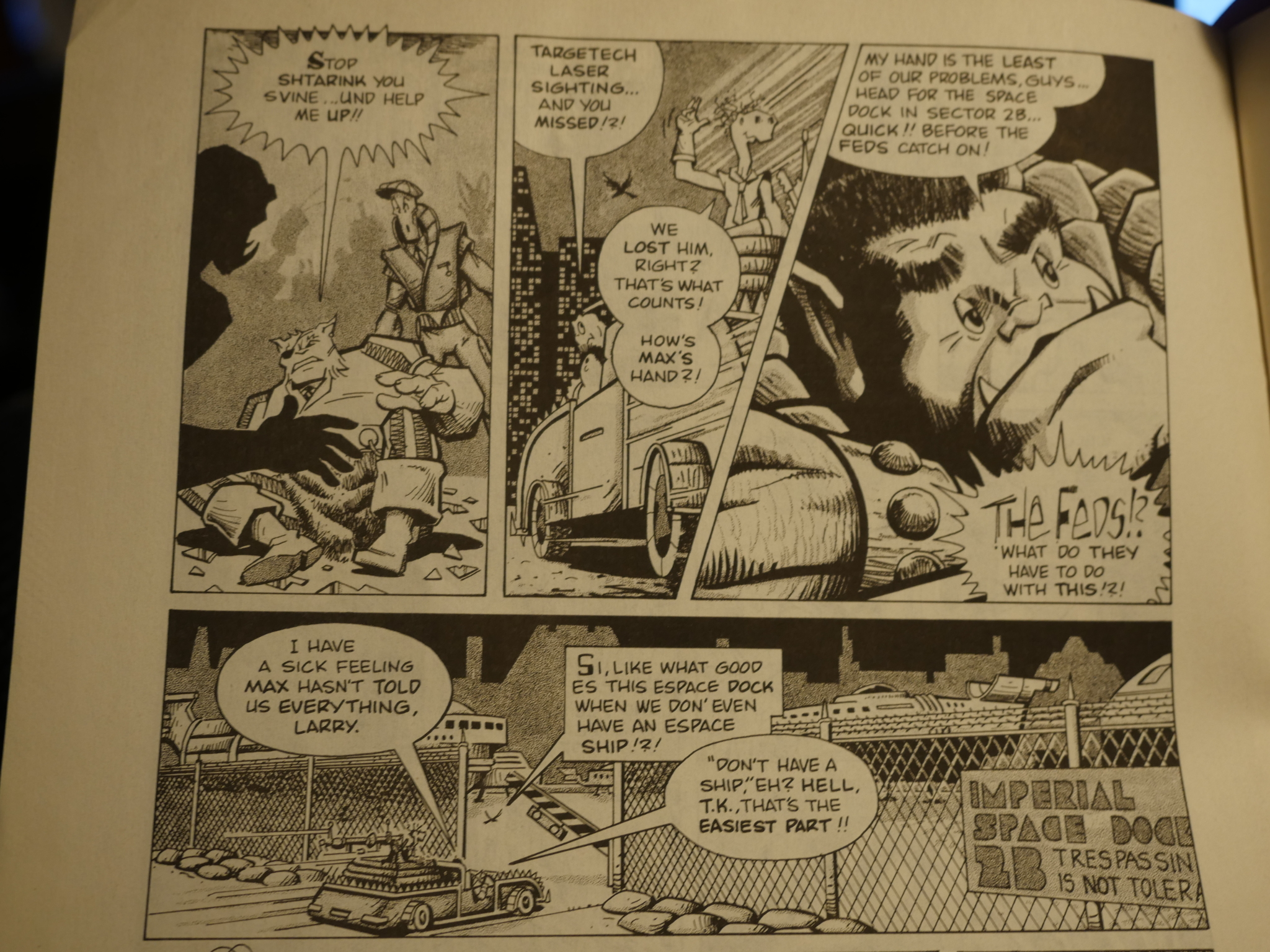 But noooo! The fourth serial (Holo Bros by Jim Rohn) has characters with lumpy heads!!!

And is that doubletone (Craftint) paper I spy up there? I don’t know whether it still exists, but it’s a paper that has two tones “built in” to the paper, and you use two different developing fluids to bring it out, so you can “paint” the grey tone. It also, unfortunately, has a tendency to look a bit dirty and grainy… But back to unifying themes: We have this “Ousland” poster in the Zone episode… 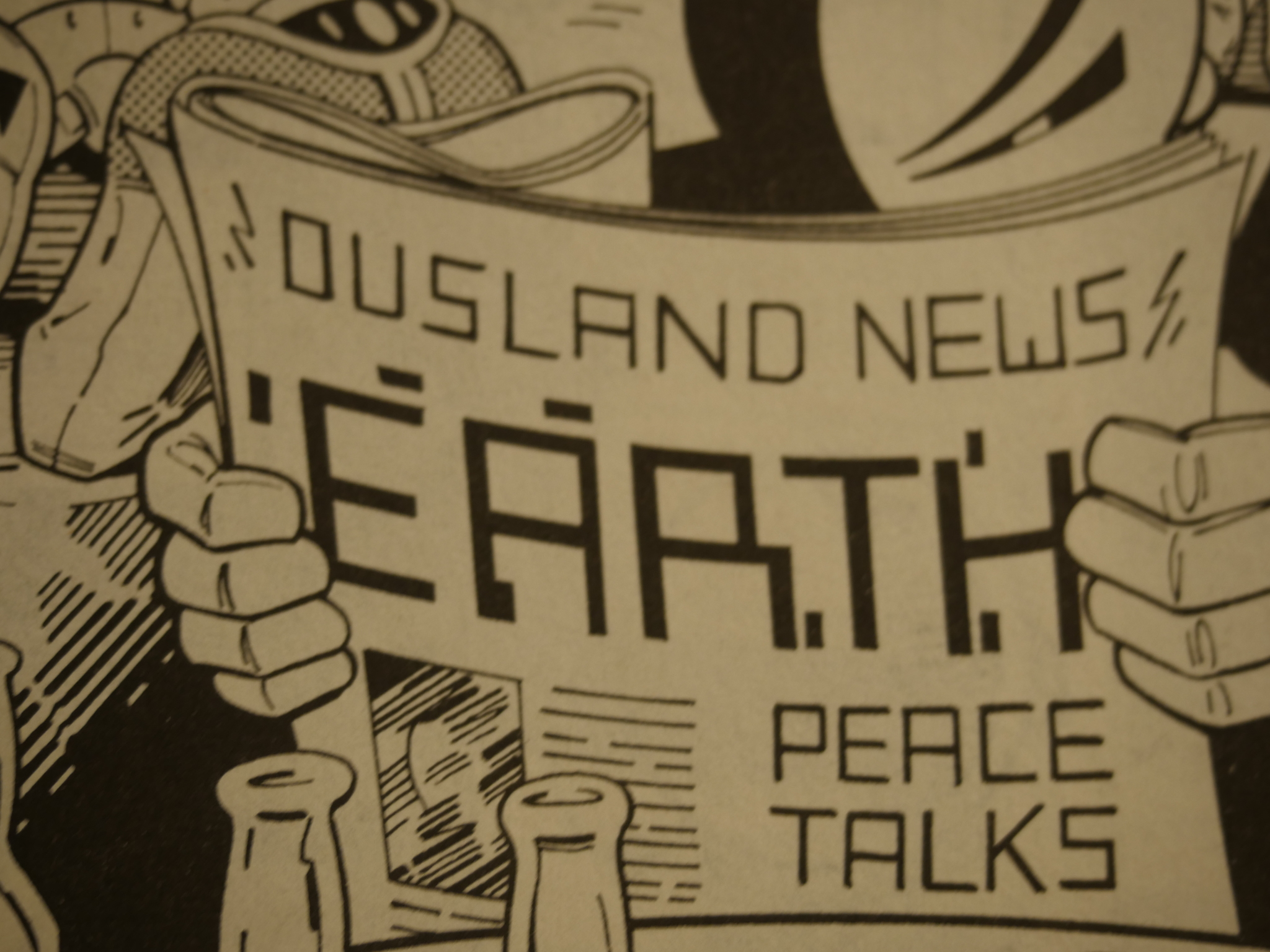 … and Bob Mercenary takes place on the Ousland planet. But the other two serials don’t seem to mention the word. Or perhaps I just didn’t notice.

So there isn’t much internal evidence to suggest why these four serials are running in the same magazine, and there are no editorials or anything, so it’s all rather puzzling. But perhaps my research team can get on it, and we’ll have an answer by the time I’ve finished this article. 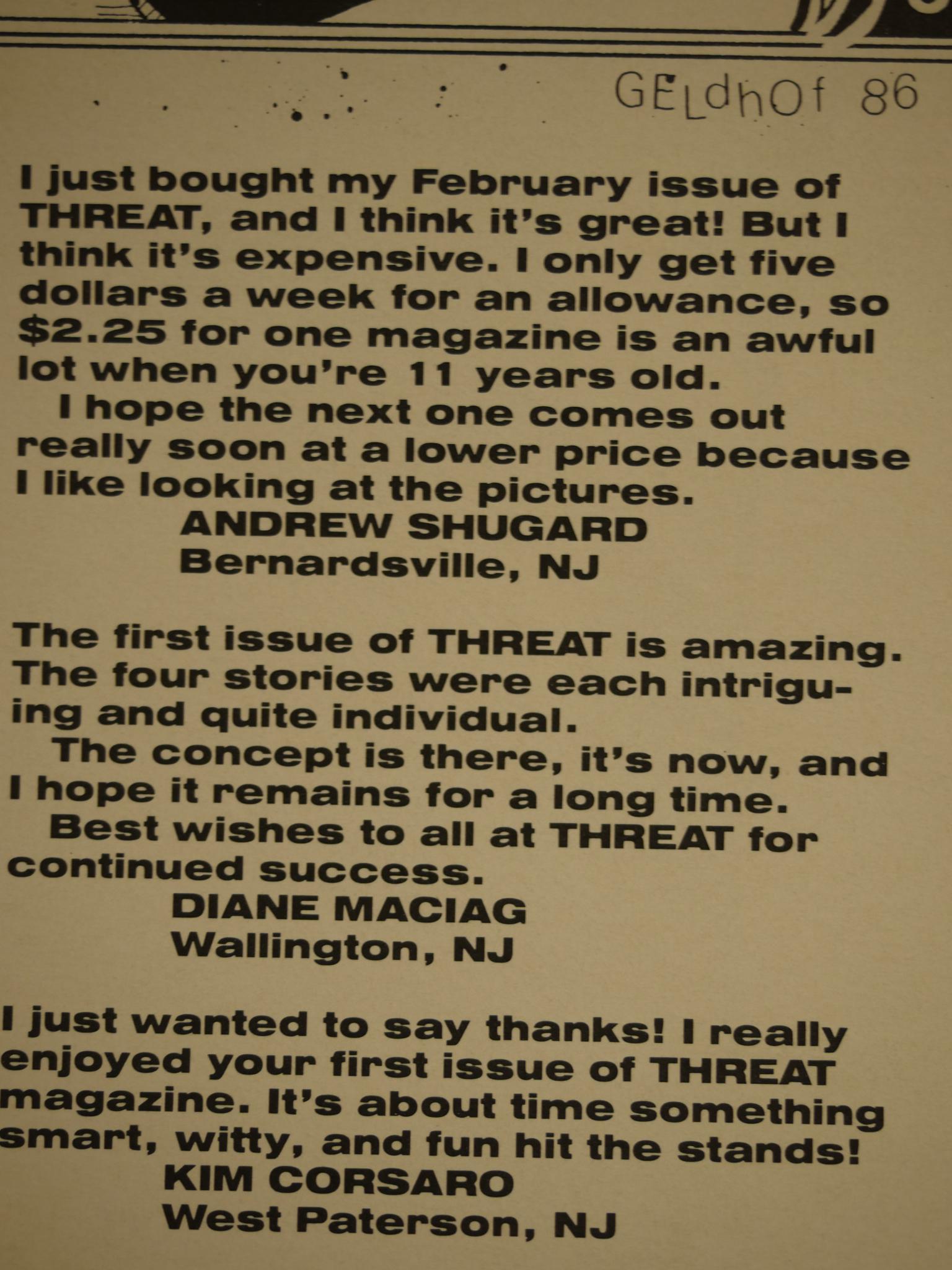 Aww. From the only letters column in the run. 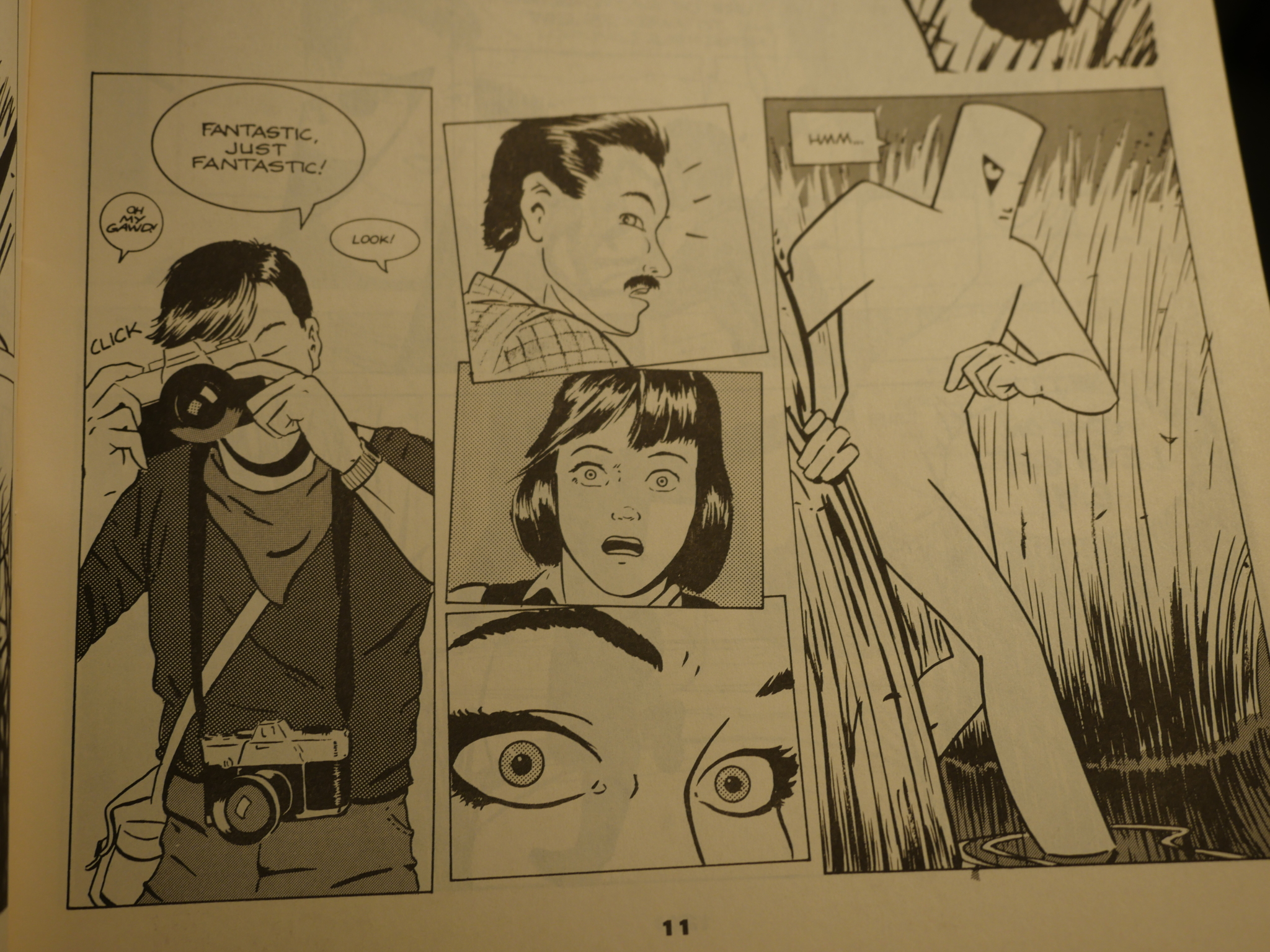 I think the Zone character really works graphically. Just negative space. Put him anywhere and it looks rather stylish. 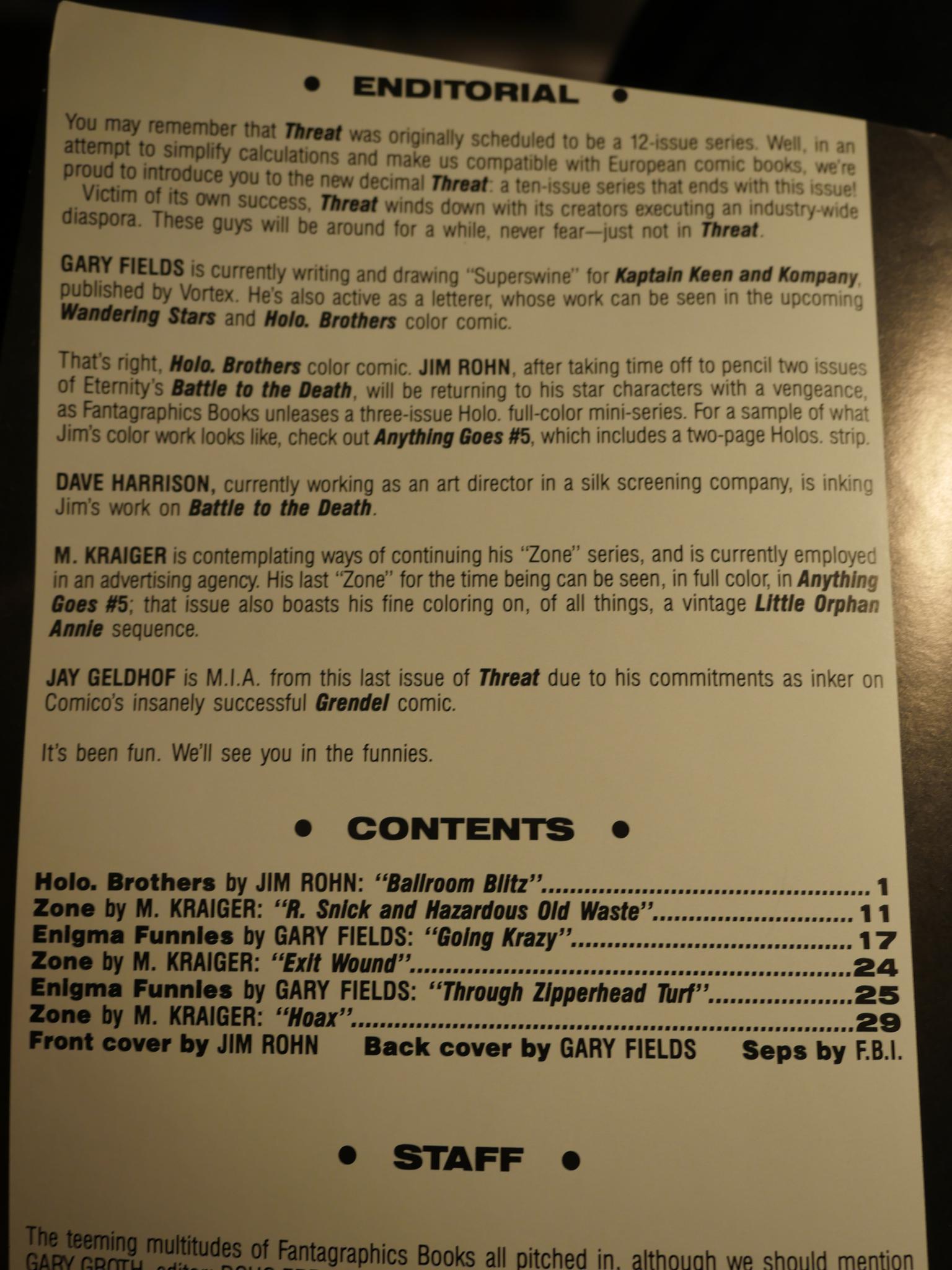 And it’s the end! Two issues before it was planned to end, apparently, although I couldn’t see anywhere in the comic itself where it said it was going to end after twelve issues.

Or both. This was during the end of the black and white boom, wasn’t it? During those days, you could apparently sell any sort of crap and not lose money, but that ended after a while. And Jay Geldhof wasn’t present in the last issue, and seemed to be working professionally by then, so…

Anyway, the Holo Bros serial had a kind of ending (slightly ironically, since it was to continue), while the other three serials just, sort of, stopped. 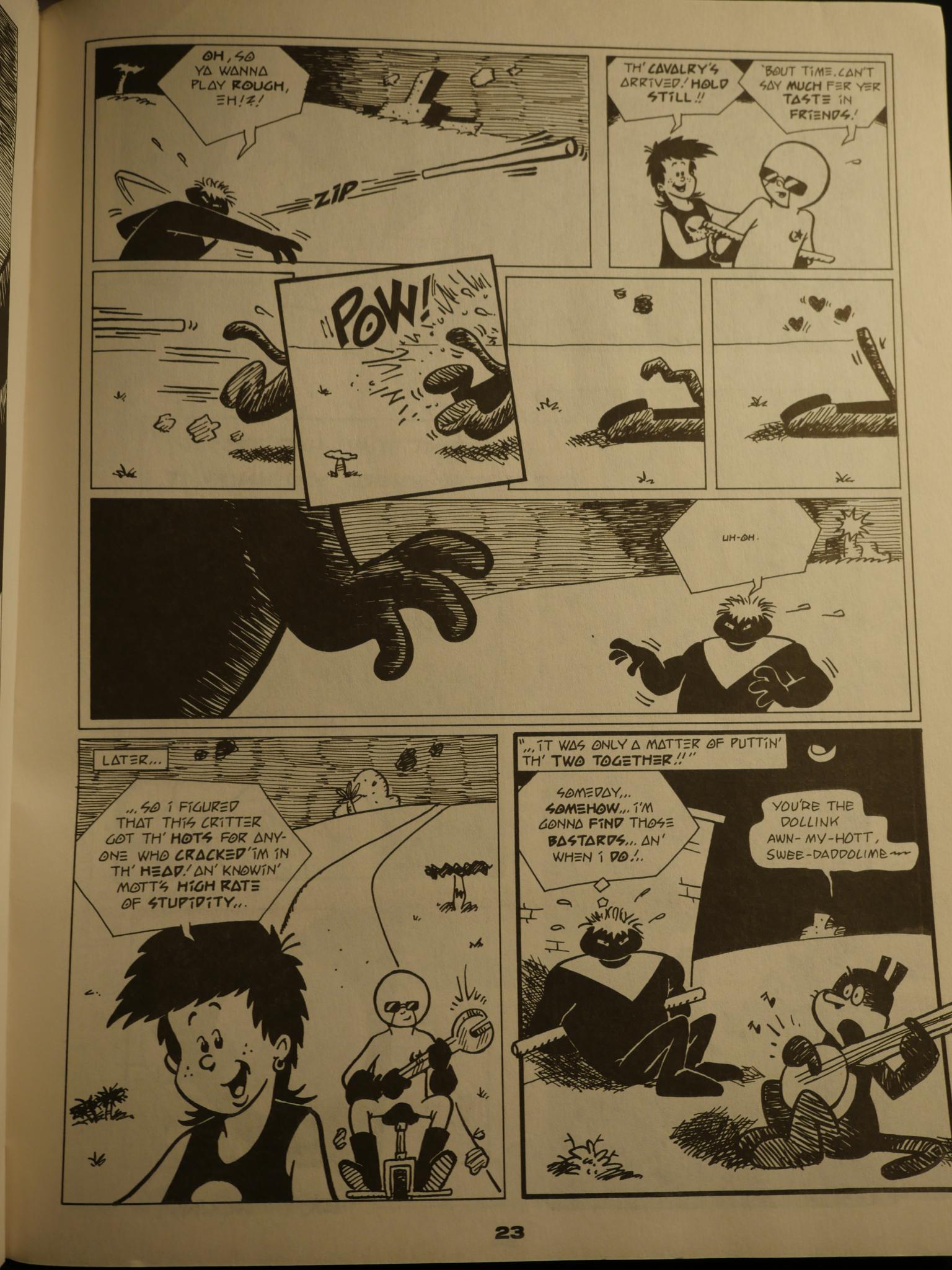 Oh, and there were recurring George Herriman references. Here from Enigma Funnies… … and here from Zone.

So, is Threat worth seeking out? I apparently got all my copies at a sale at the local comic shop in 1987. I can tell because of the price tags still affixed. But even so: No, not really. This is pretty basic genre stuff.

The research results are in!

Jim Rohn would go on to publish a solo Holo Bros comics for Fantagraphics, and some other stories here and there, but not a lot after the mid-90s.

M. Kraiger published one issue of Zone with Dark Horse in 1990.

Gary Fields has published a large number of things at a variety of publishers and seems to be still active.

Jay Geldhof went on to ink Grendel for a number of years.

But the team still has no idea why just these four comics were put together into a single anthology. Perhaps Gary Groth just happened to have four vaguely sci-fi-ish submissions at the same time and thought “why not”?