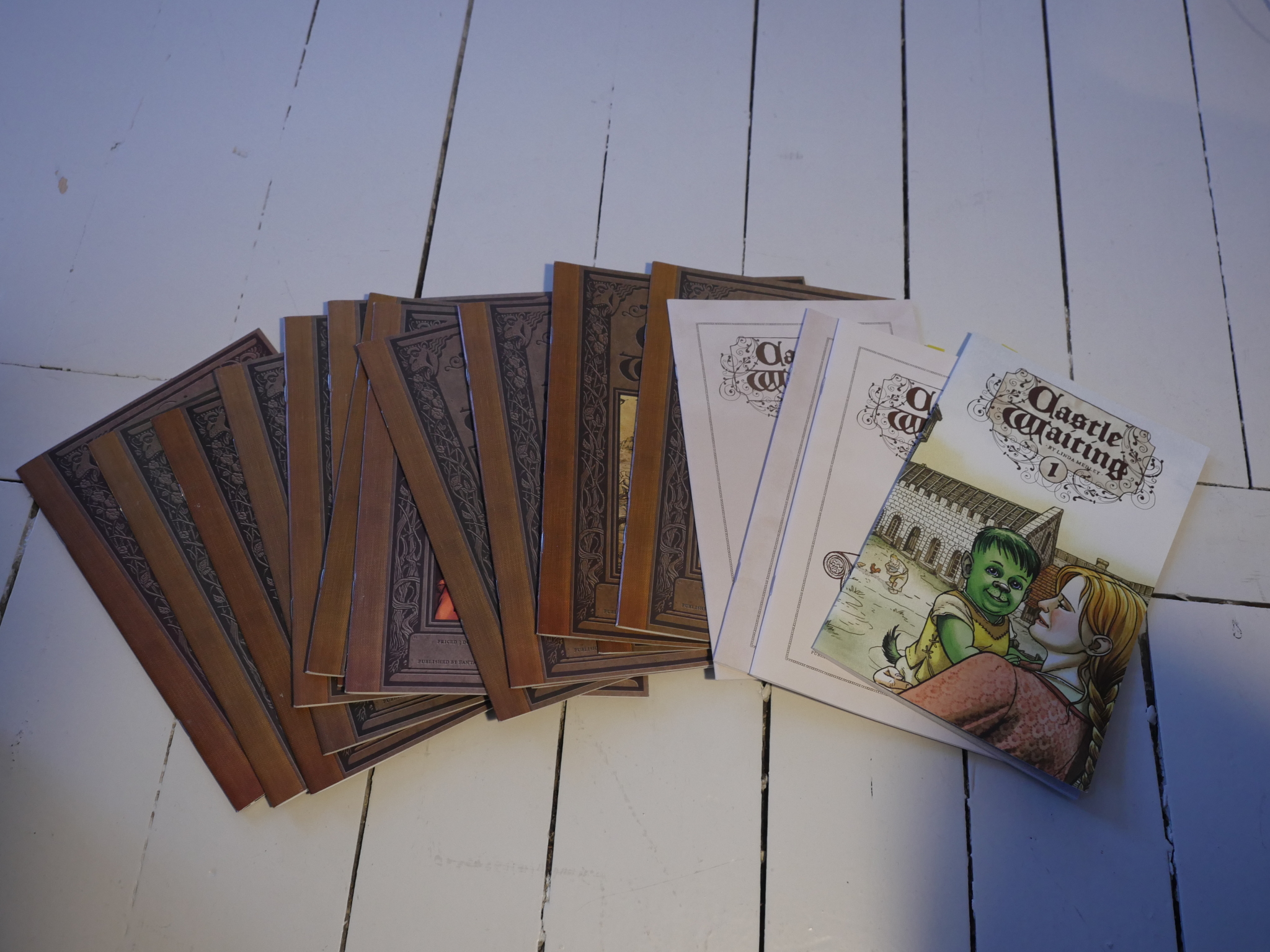 I haven’t done this series of postings in anything resembling chronological order, but I did decide to try to do the remaining ones in an orderly… order… But then I flipped past Castle Waiting in the boxes once again, and I just had to re-read it. Again.

Linda Medley got a Xerix Foundation grant and started publishing Castle Waiting herself in 1996. After seven issues, due to having to make a living, she spent a year at DC, and then came back, published by Cartoon Books, starting with a new issue number one. This is where I started reading the book. After four issues she left Cartoon Books and started self-publishing again, and reverted to the old numbering. That’s issues 12 to 16, where the two final issues started a new story.

Then there was a three year hiatus, and Fantagraphics picked it up with a new issue number one… that reprinted the last two issues of the previous series, and had eleven new story pages. Then everything went smoothly until 2008, when there was a four year hiatus, before issues 16 to 18 were published. And in the meantime Fantagraphics had published the first fifteen issues in a hardcover.

Are you with me here?

Oh! What’s it about? Er… mostly Jain moving into the castle… 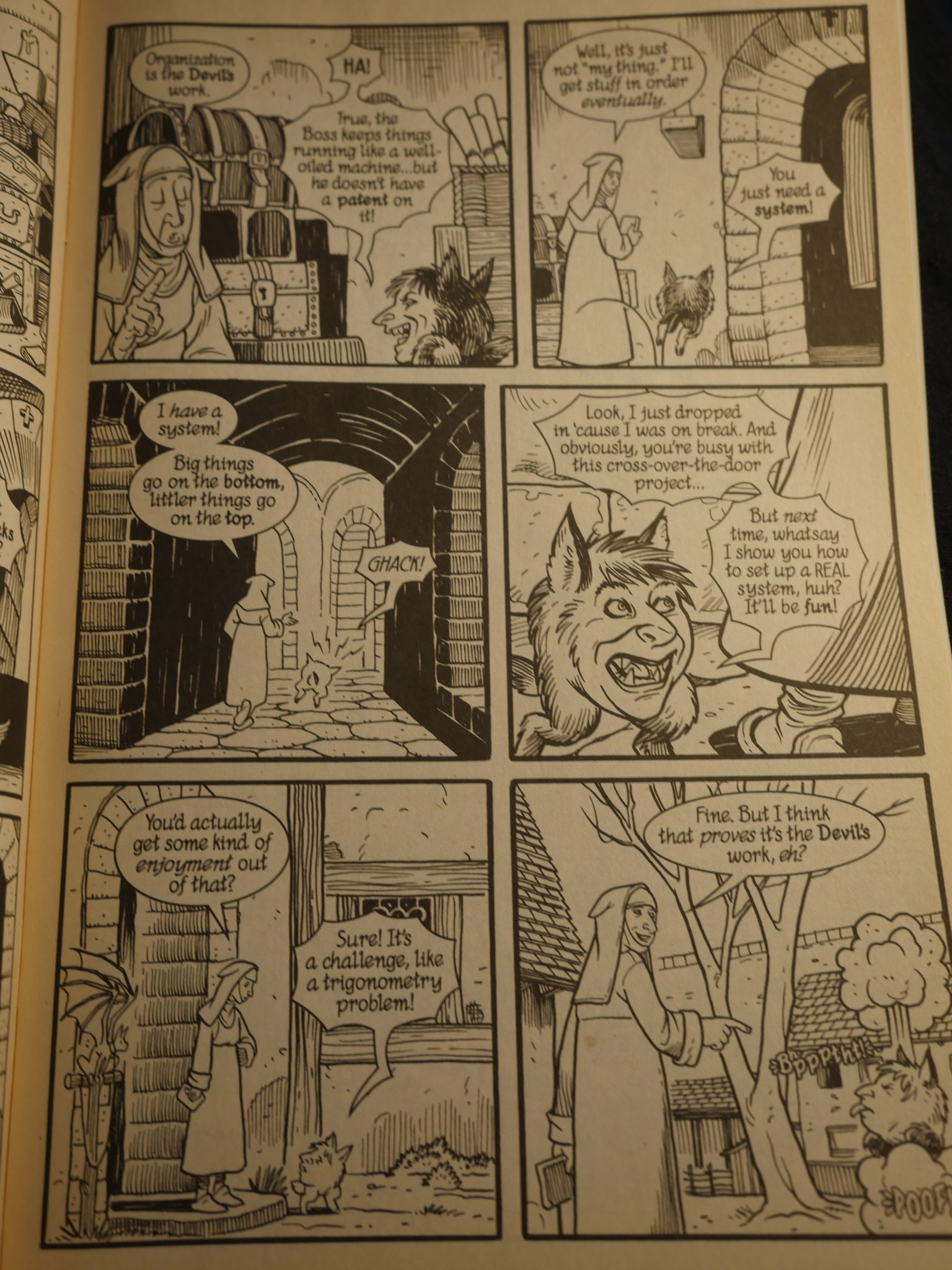 And it’s wonderfully drawn, and supremely humane, sweet, laugh-out-loud funny, and there’s nothing like it. It’s something I want to read and re-read again and again. It’s just such a great and exciting place to spend a few hours. 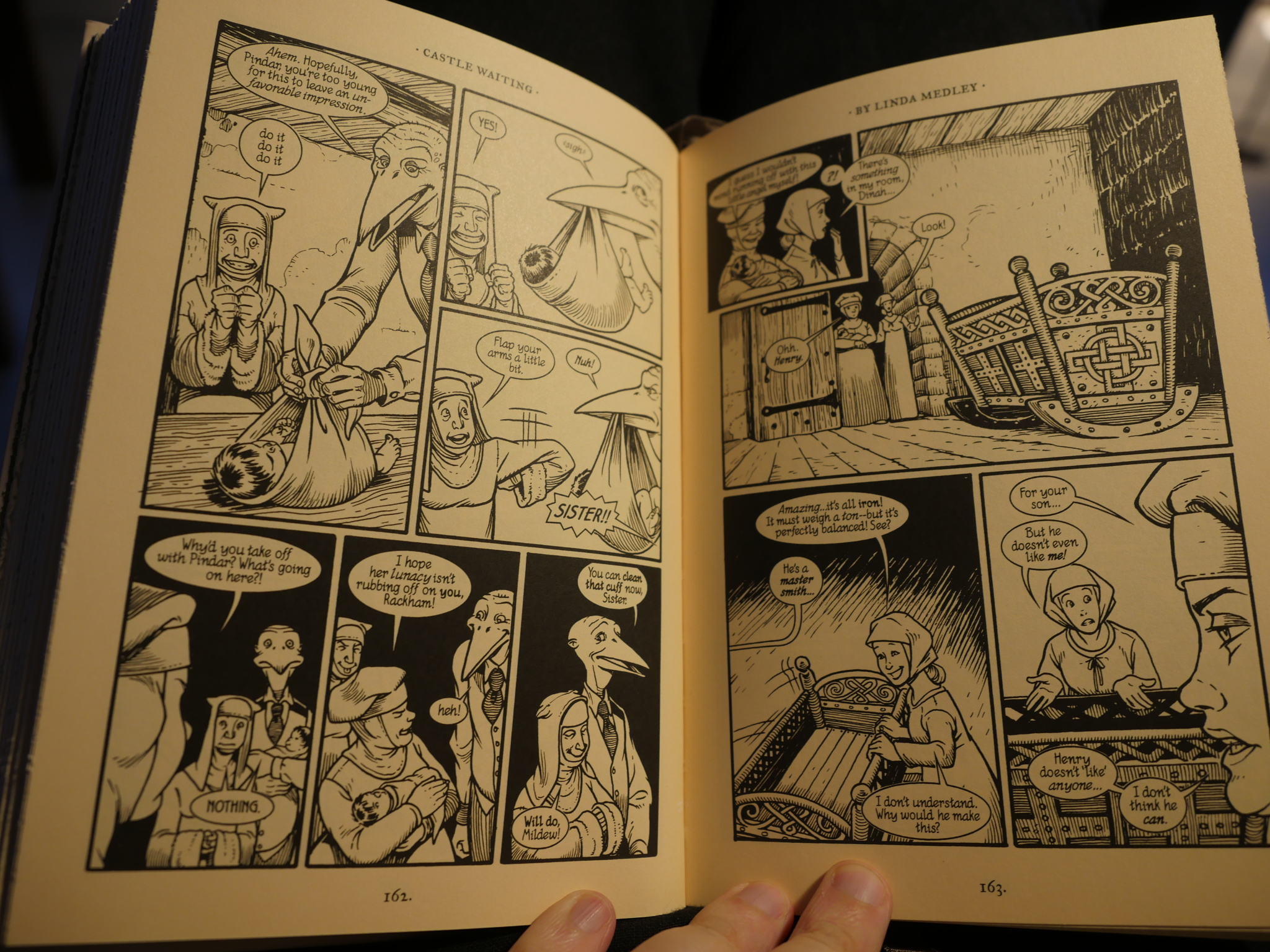 The pre-Fantagraphics issues were reissued by Fantagraphics in a five hundred page hardback edition, and it’s printed quite a bit smaller than the original standard-comic-book size. 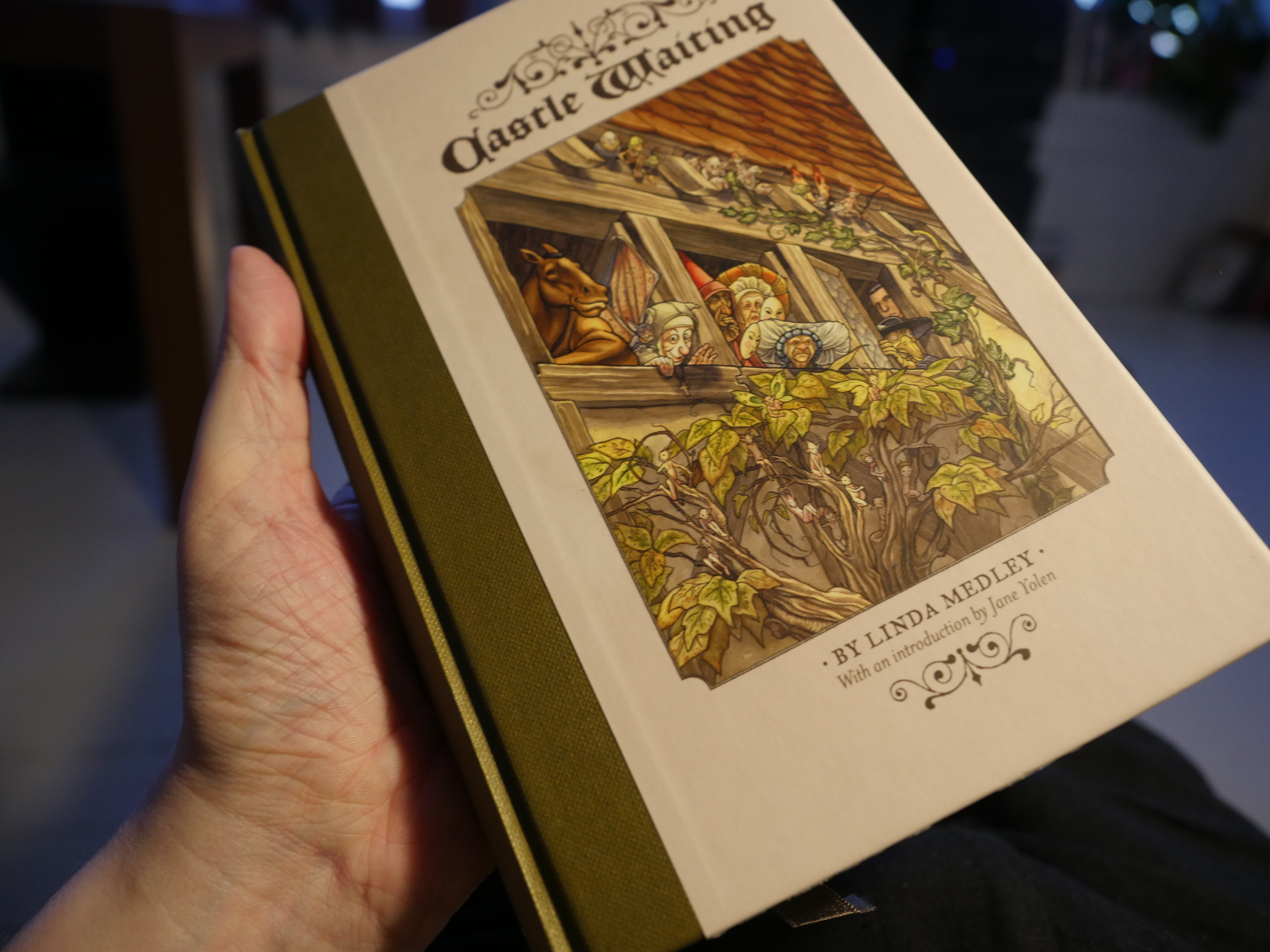 It suits the material quite well, but for this re-read I read the original issues where I had them.

As a single entity, this book is pretty structurally weird.

It starts off with a prologue, which is (basically) a retelling of Sleeping Beauty. Only funny. Then she started on the main story, about Jain Whatserface [NOTE: CORRECT BEFORE PUBLISHING] arriving at Castle Waiting and moving in. This is where all the world building really starts: There’s a sense that all the people who live in the castle have stories that make up and flesh out a fully consistent and interesting world. We’re not getting any infodumps about anything, but we’re getting a steady stream of information about these people and what it’s all about.

There are some short flashbacks, too, and it’s all rather riveting.

Then, about two thirds in, it’s a very rainy day at the Castle, and Sister Peace starts telling the others about her adventures before she came to the castle. It’s a fun and riveting and sad and happy and wonderful story (I laughed, I cried), but that’s the rest of the book!

It’s like… whaaa? What happened to Jain moving in? That was leading somewhere, right? Why just leave that hanging? That was riveting, too? Why go to a different storyline suddenly? 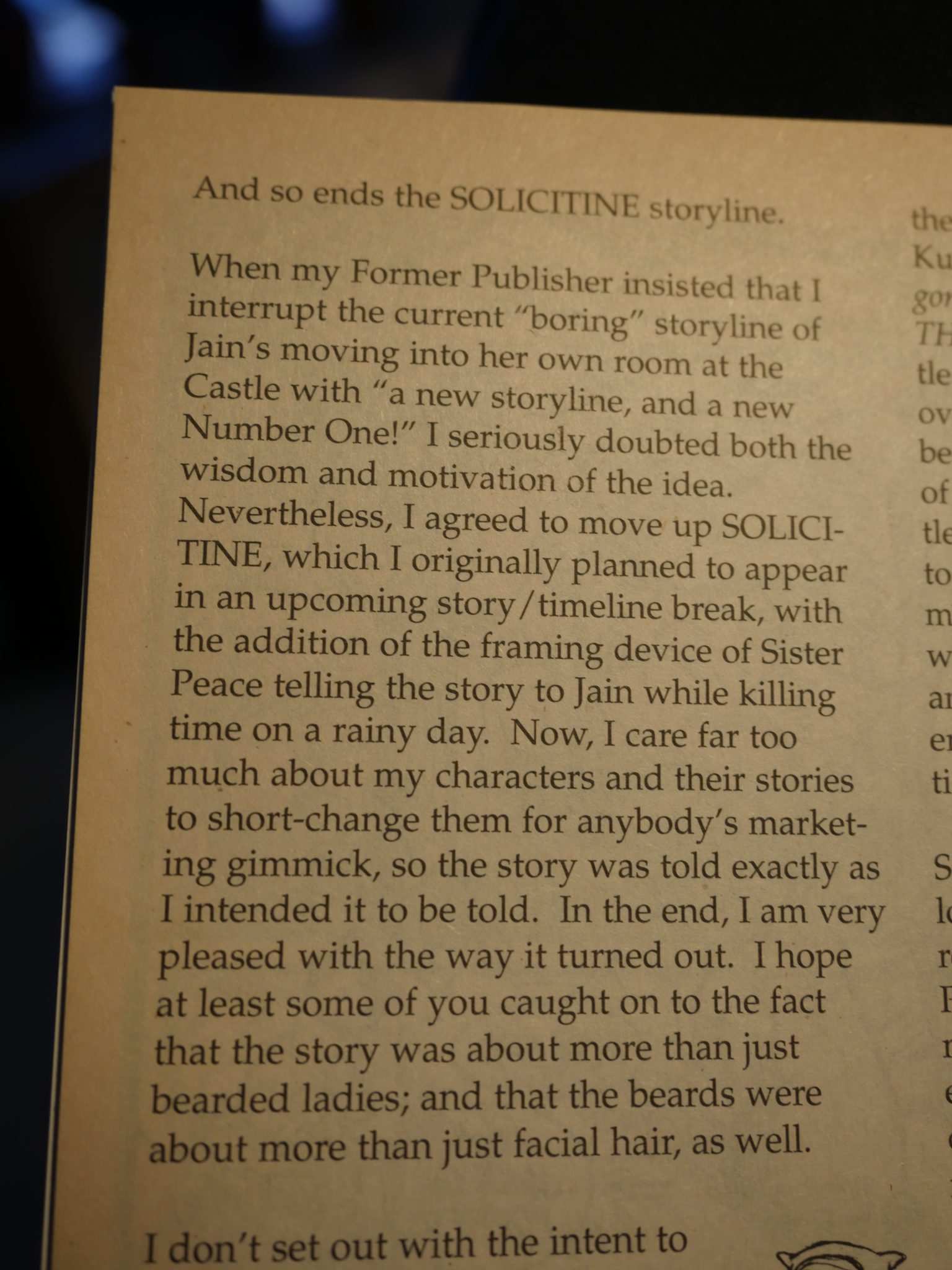 Oh. The publisher, Cartoon Books, made her. Fucking editorial interference. And if they would meddle to that extent, it’s no wonder she left the company after just four issues. Although I have no idea whether she left or was dropped. But… geez.

As wonderful as each and every page in the first Castle Waiting collection is, I think it would have made for a more satisfying reading experience if it had been released in two books: One for the prequel and the start of the main storyline, and one for the Solicitine story.

Anyway! That’s brings us to the Fantagraphics issues, which is what this blog series is supposed to be about. The first issue has a nice full-size drawing of Jain and her baby, Pindar, and is the only issue that’ll have a cover in that style. One very noticeable difference in the first Fantagraphics chapter is new, very computerey lettering. Compare above the last self-published issue… 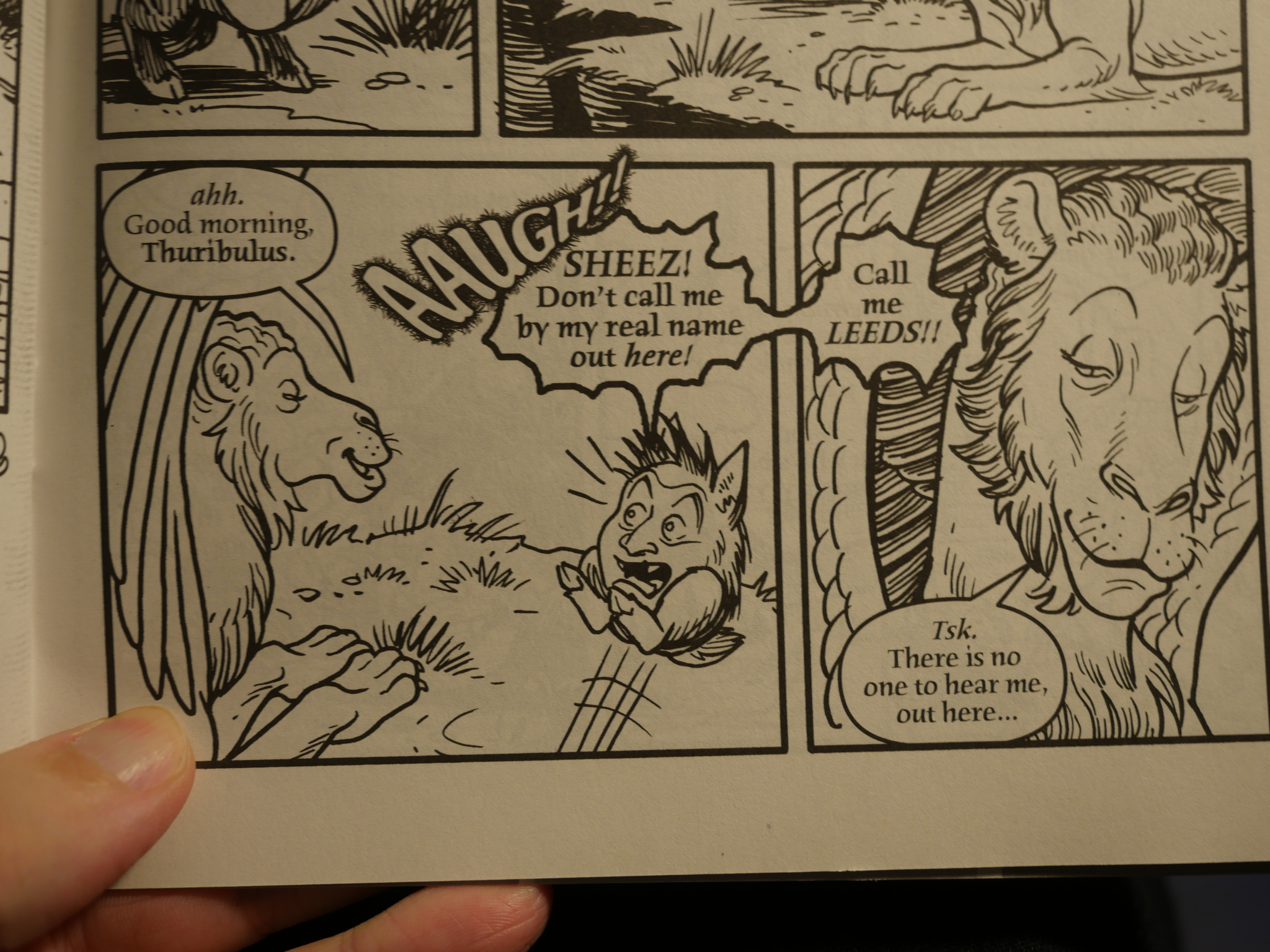 … to the first Fantagraphics chapter. Now that’s what I call quite 2006 computer lettering. 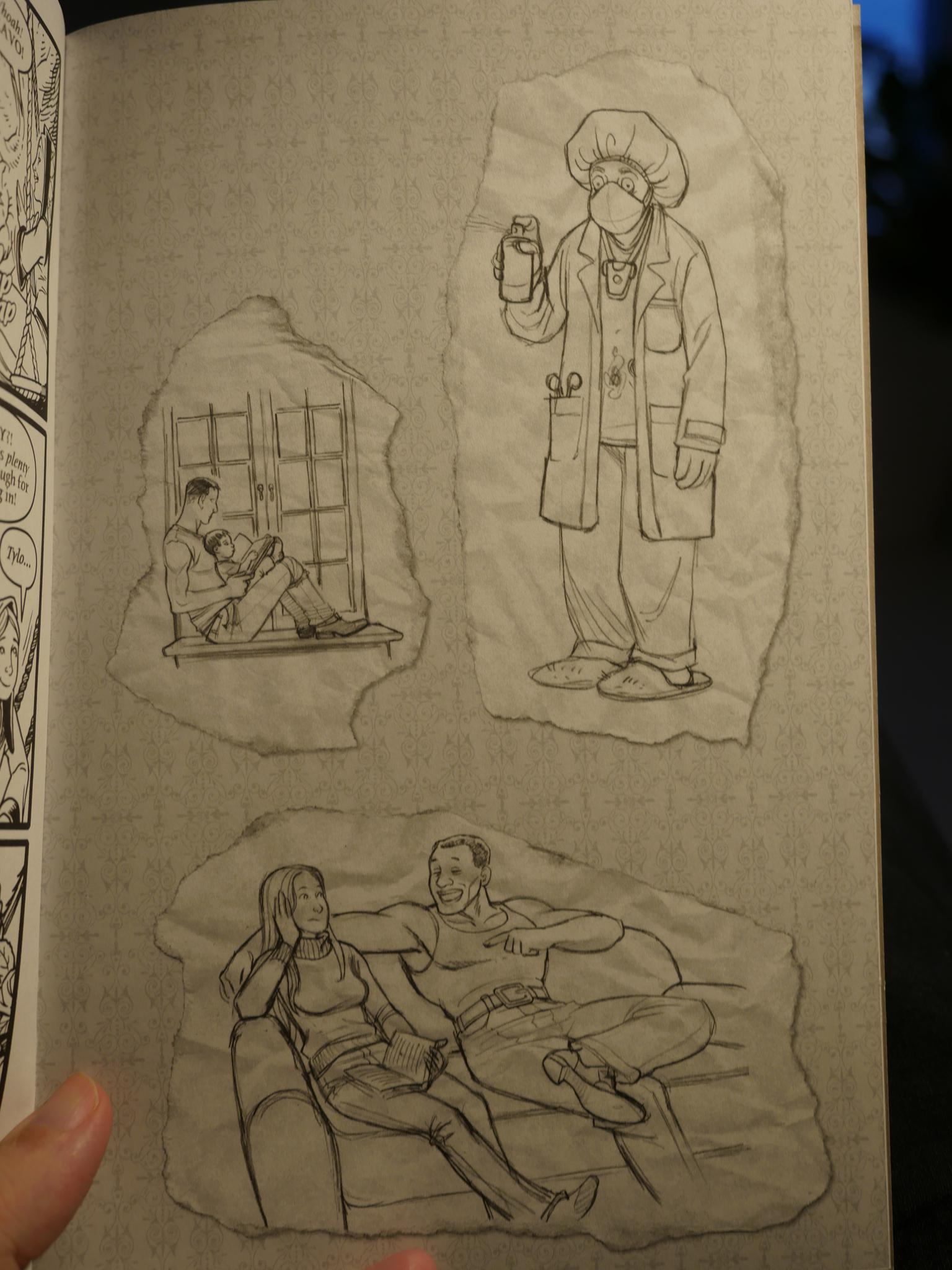 I guess this is what the people in Castle Waiting would look like if they were contemporary. And human. So that’s Henry and Pindar, and the doctor, and Jain and Chess… 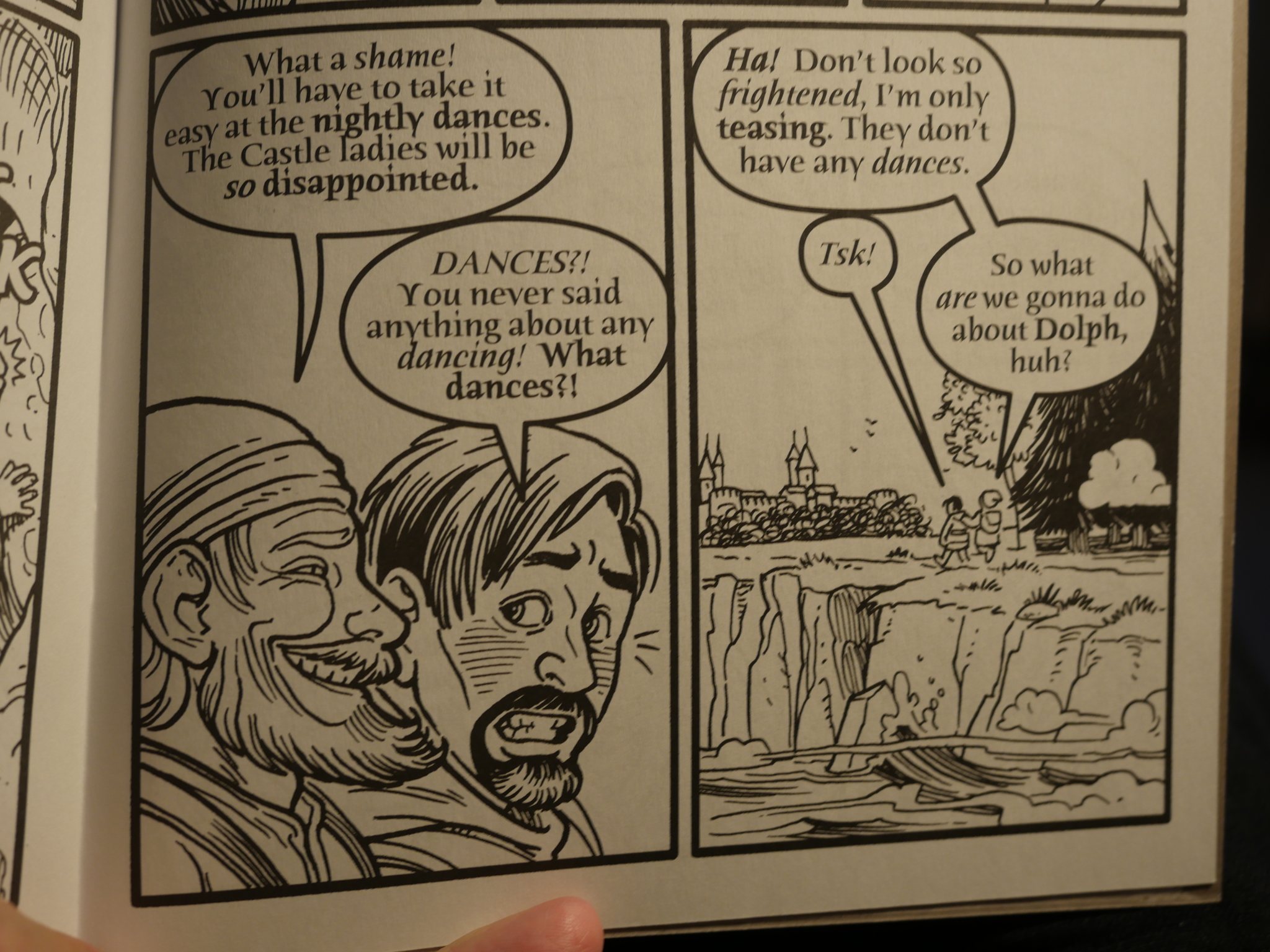 It’s as if Medley had looked closely at the collected edition (which was in a smaller size) and decided to adapt her drawing to a style that would be more suited for reprinting in that format.

So the panel borders become heavier, and figure lines become thicker, the lettering is larger, and there are fewer panels per page. And this does look rather nice in the collected edition; it’s true. But it makes the pamphlet edition look rather odd. I found myself holding the pages further away just to get a proper scale to them… 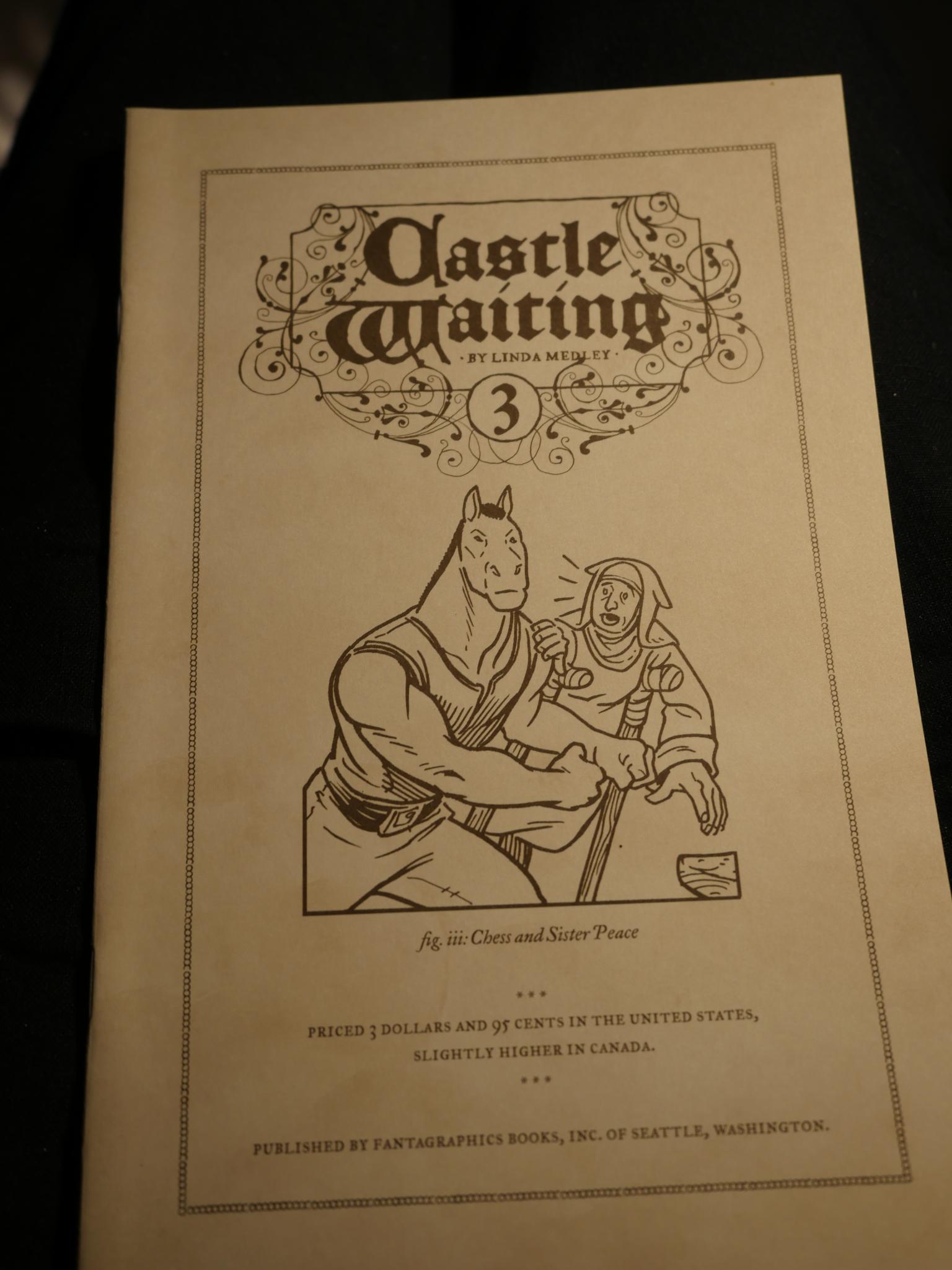 Or perhaps it’s just a way to try to get the issues out faster. Issues 2-4 all have covers in this style: Just some text and then an excerpt from an internal page: That is a very weird way to sell a comic book. 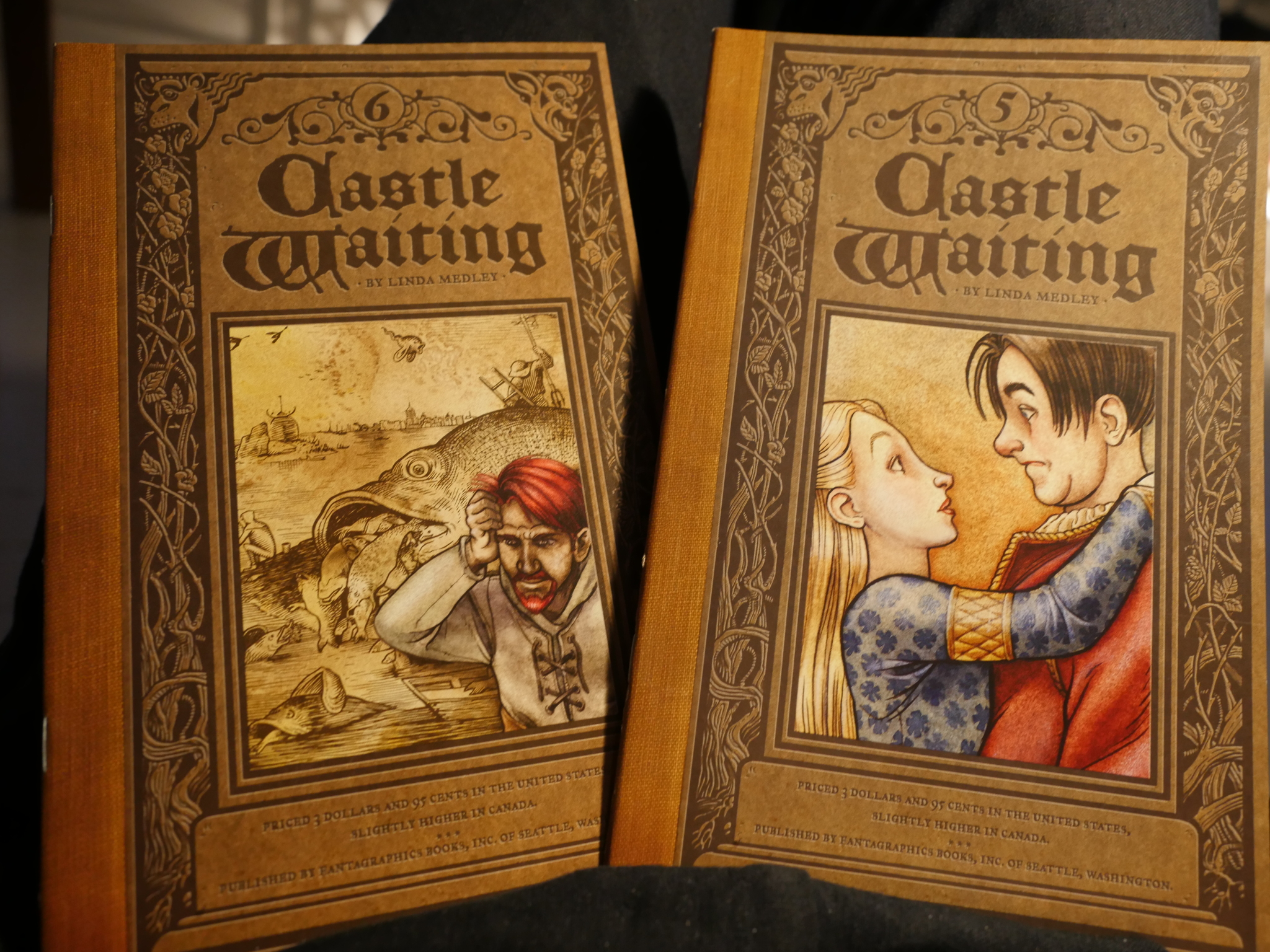 The remaining issues used this format: A small inset colour drawing inside a lot of framing. It looks rather nice, and it’s certainly distinctive… 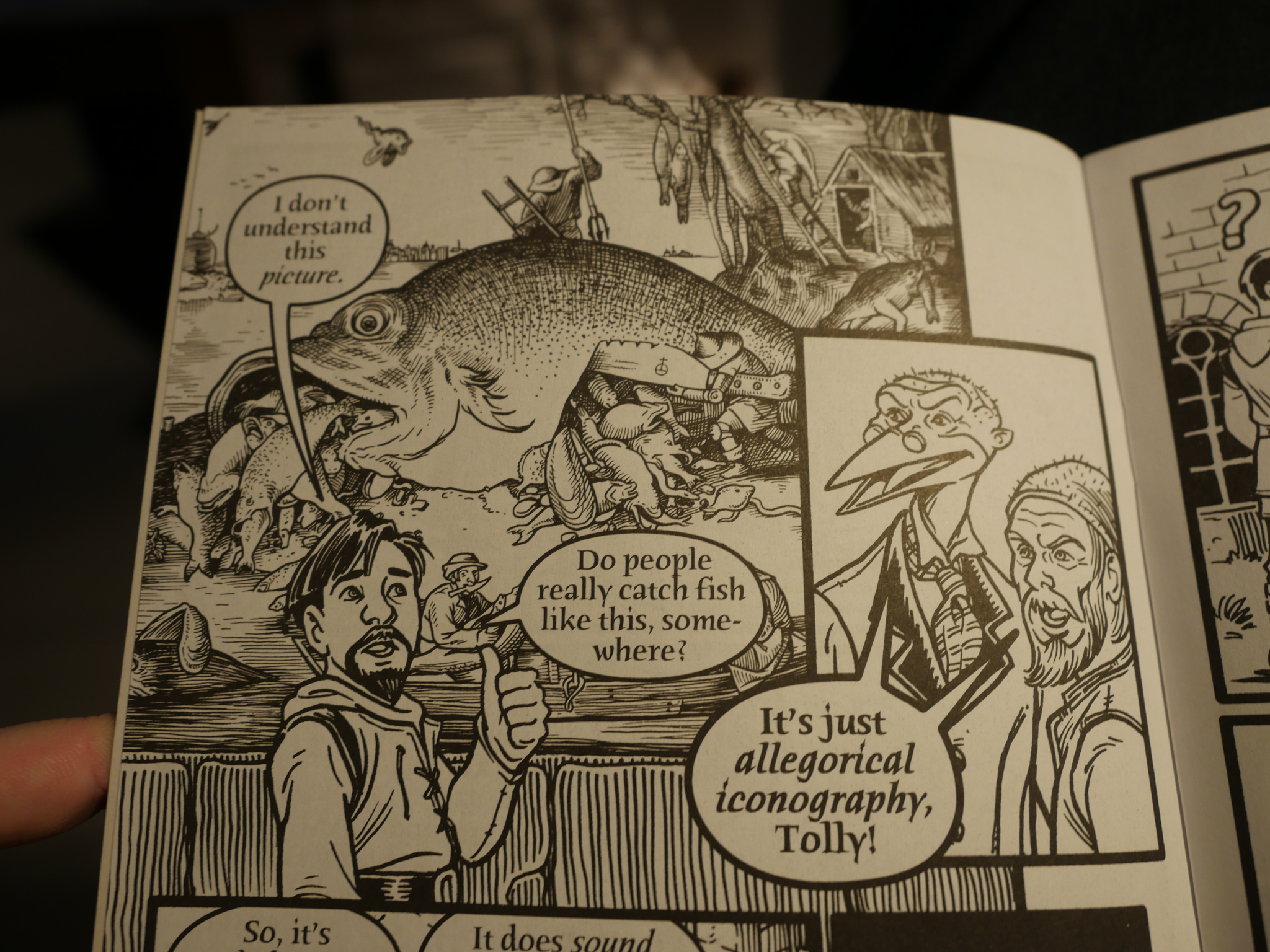 The Fantagraphics issues are a very quick read compared to the ones that preceded them. Not only are there fewer story pages (around 20 per issue), there’s no supplemental material at all. The self published issues used to have lots of letters, research material and general musing from Medley, but there’s nothing of the sort here. It feels oddly muted… 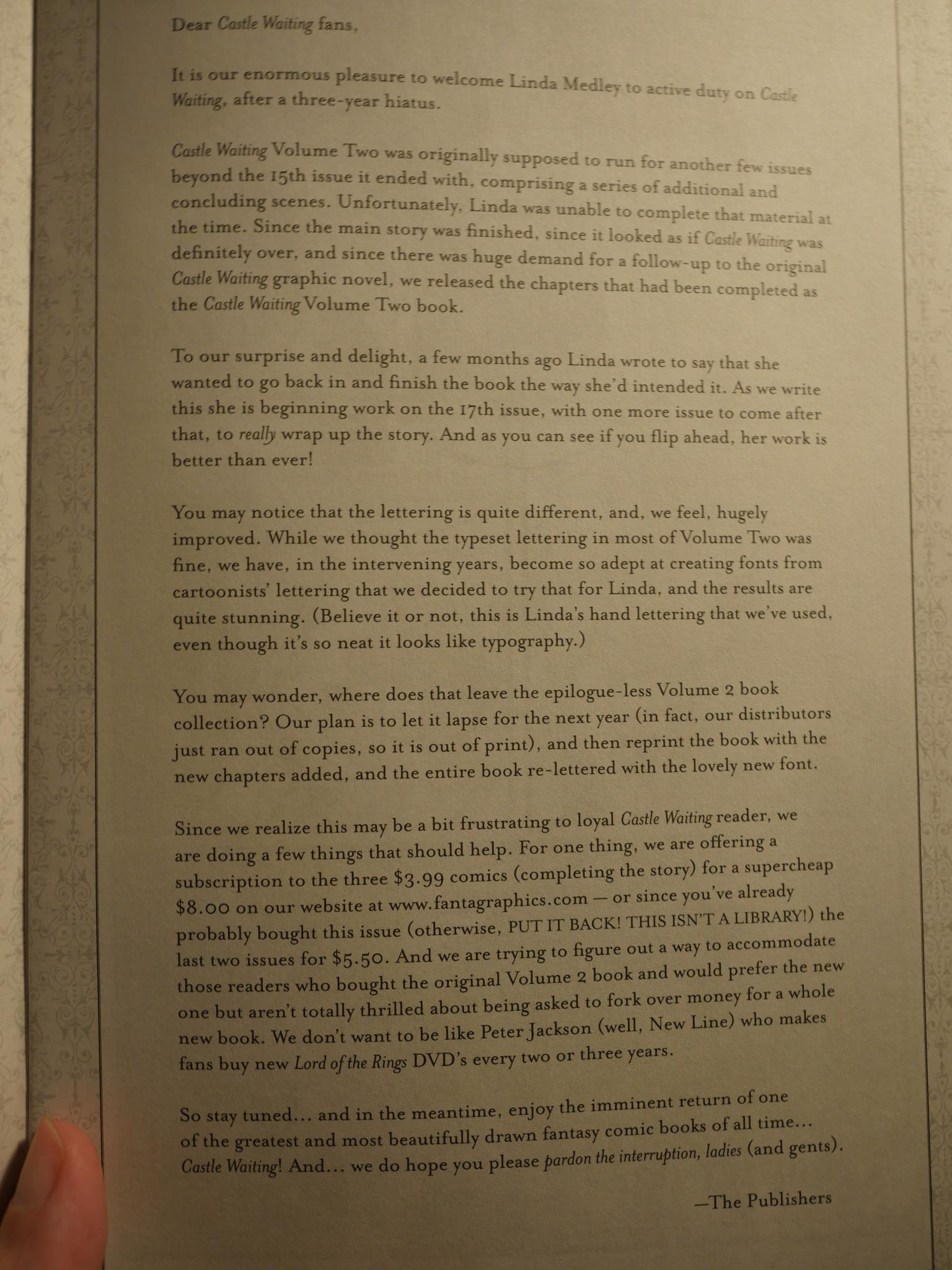 Then there was that hiatus… and what “The Publisher” says about the main story being finished, so they published the collection is rather weird. Nothing at all finished in issue 15. But the artwork changed quite a bit during the hiatus. Now Medley was back again to her previous detailed style. Yes, that page is meant to be cluttered, but it’s a very well-drawn, detailed clutter. 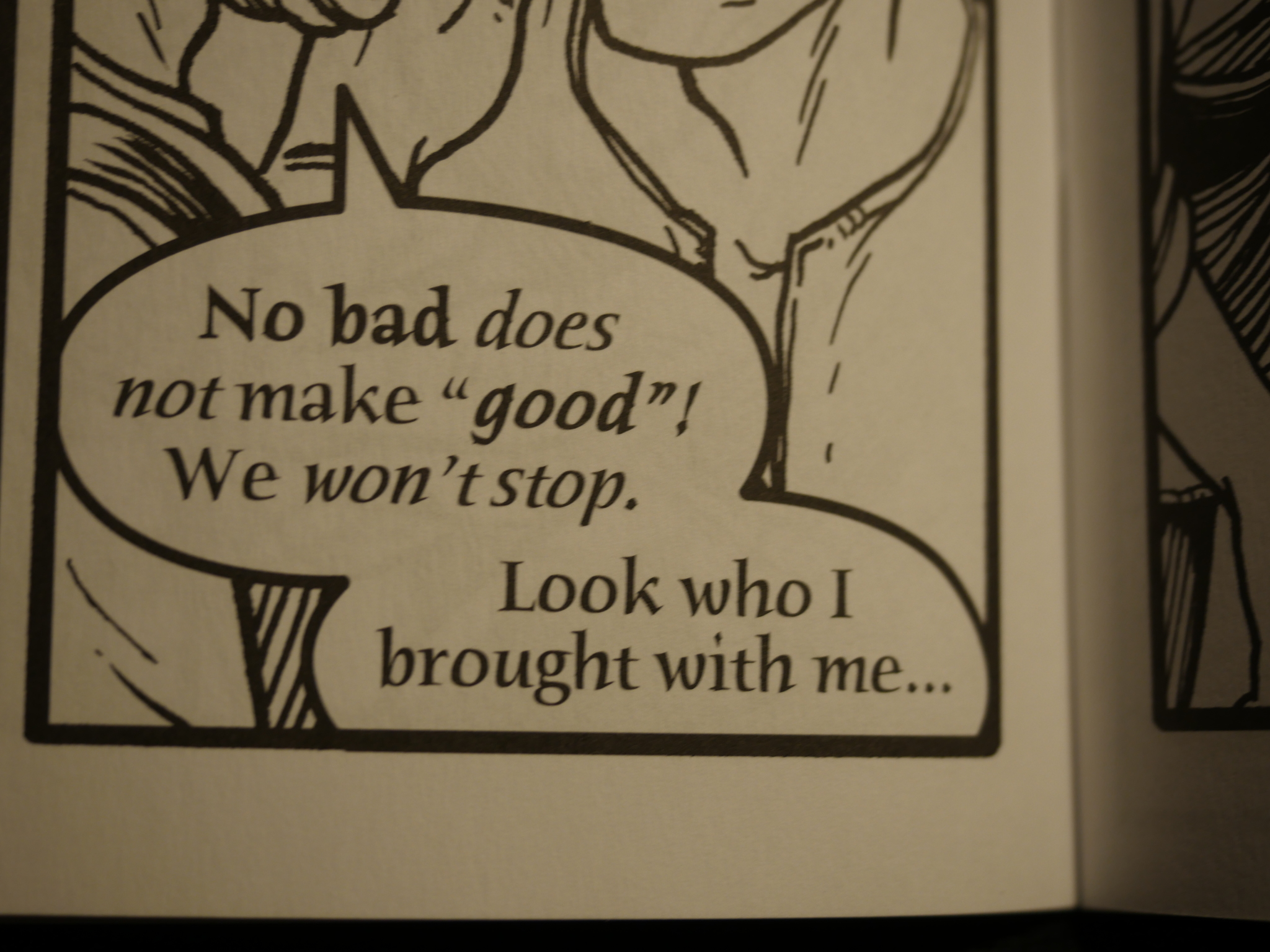 About that lettering the publisher mentions up there. Here’s how it was originally… 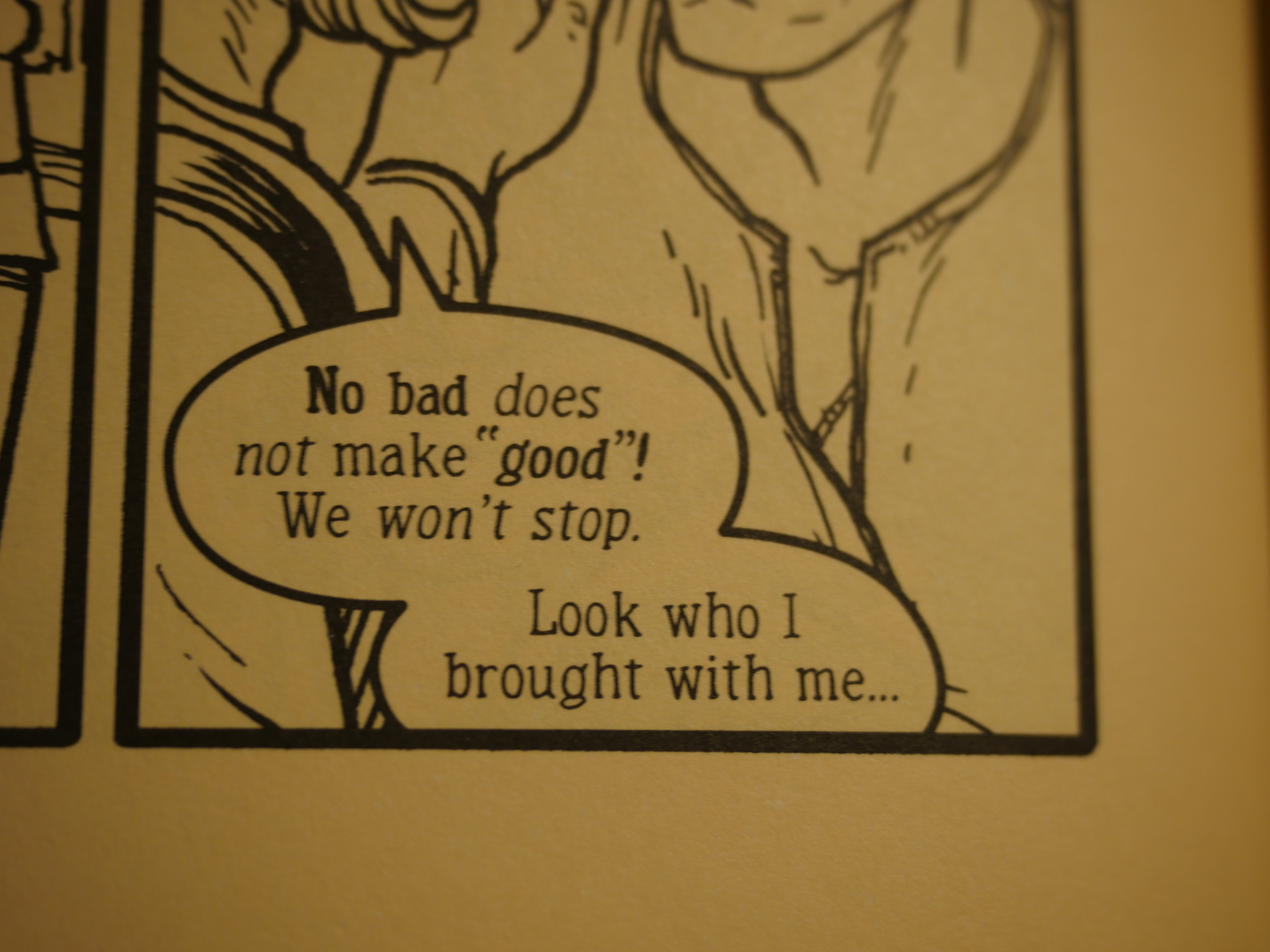 And here’s how it is in the reprint. That is a lot better, yes. 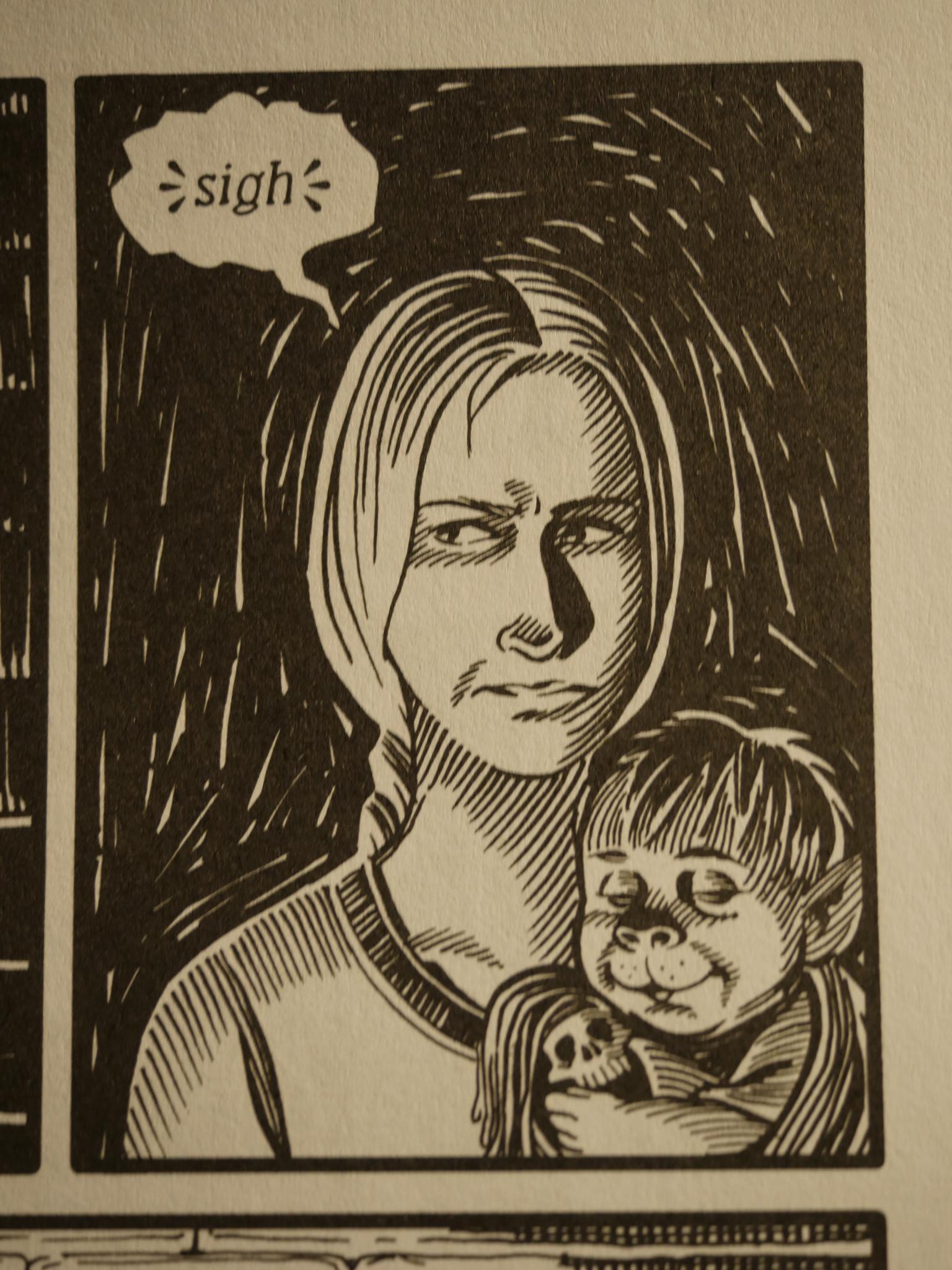 And while being recognisably Linda Medley, some panels feature a somewhat different, and darker rendering than she’d done before.

Compared to the pre-Fantagraphics issues, virtually nothing happens in the Fantagraphics series, but it’s structurally a much more solid work. It’s a real book. And it’s wonderful.

Linda Medley is currently working on the next Castle Waiting volume, and needs your help to get it done.