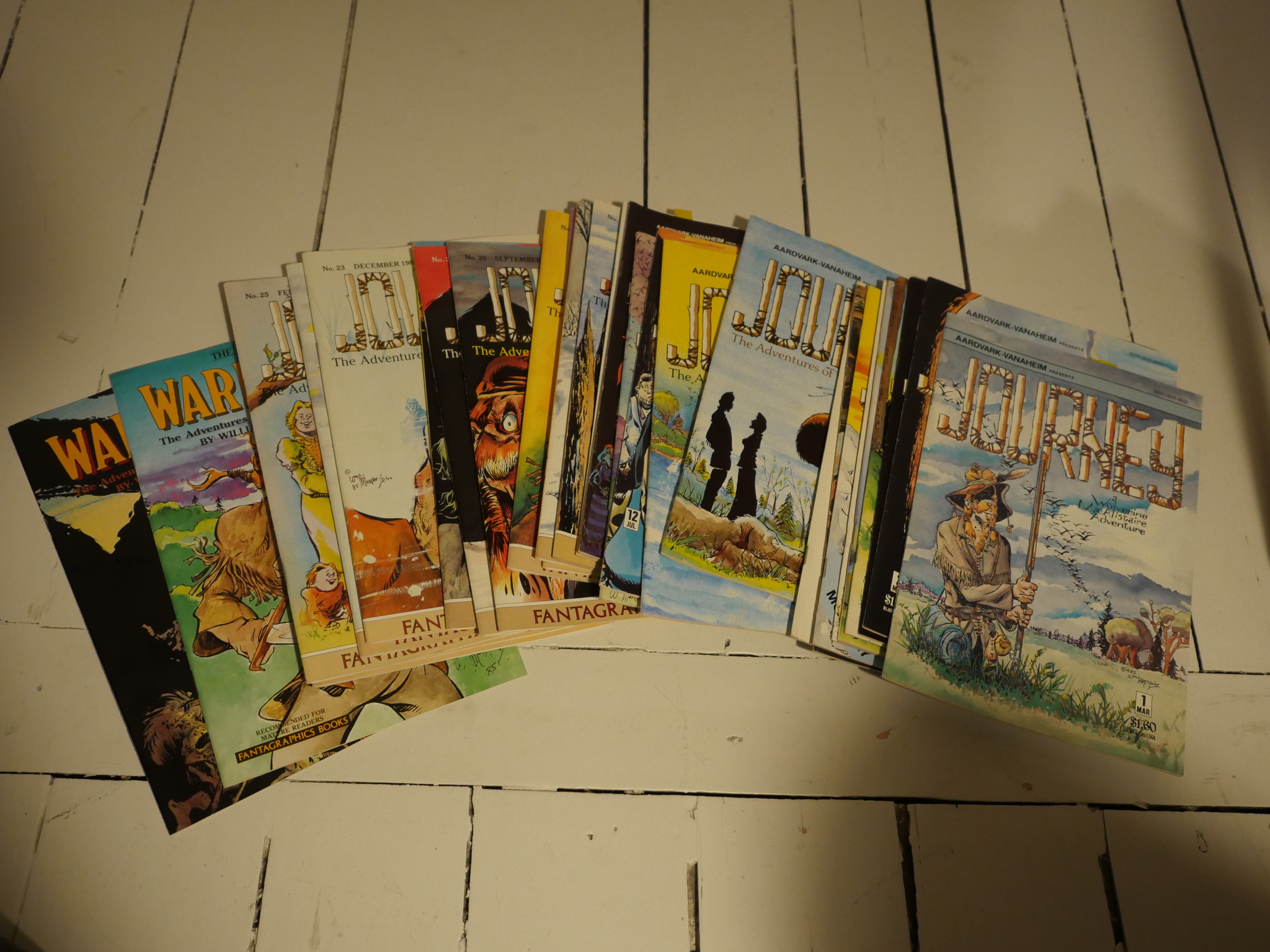 The first fourteen issues of Journey were published by Aardvark-Vanaheim. While this blog series is supposed to be about Fantagraphics, I just had to re-read them all.

I was about 14 when Journey started, and I remember being really enthusiastic about it. I’ve re-read the first handfuls of issues time and time again, but the last time I did that was probably in the late 80s. So I was really curious about what it would be like re-reading these comics now. 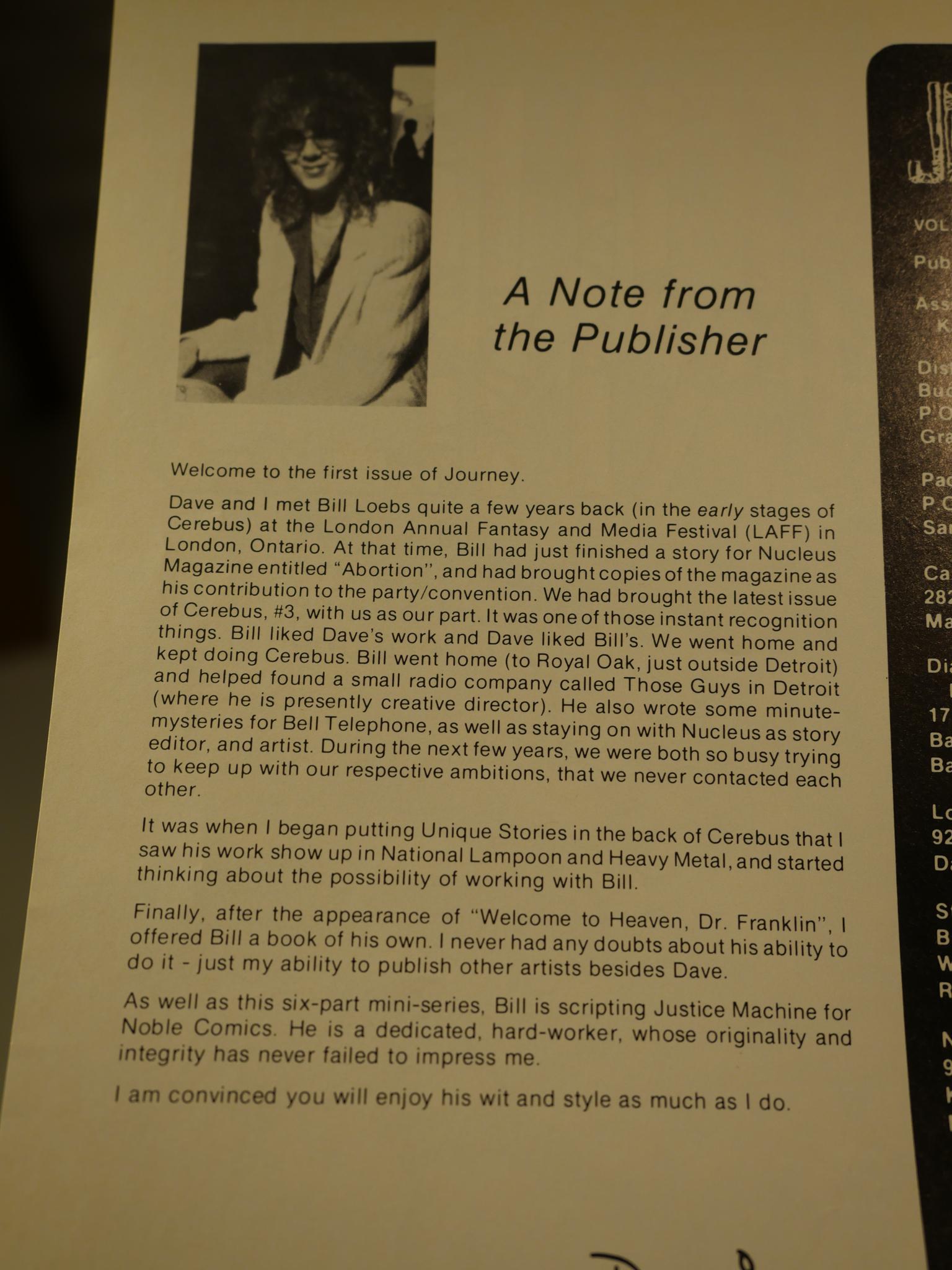 The publisher, Deni Sim (and earlier and later Loubert), explains how she came to publish Journey. That’s a pretty fabulous picture. 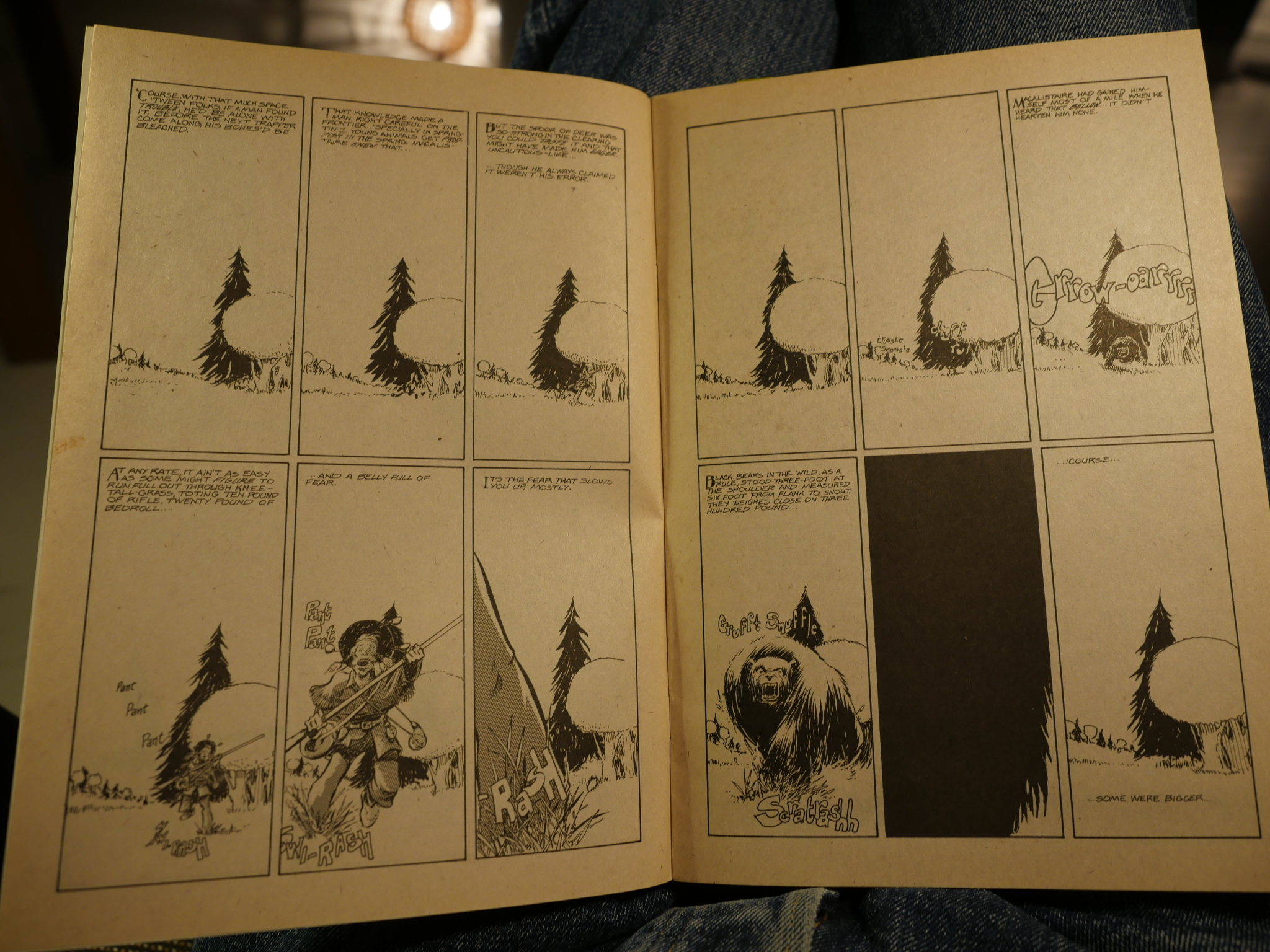 Anyway, I was surprised how much I remembered. I’ve found during this project that there aren’t that many specifics I remember about most comics, but I did remember this sequence. Wolverine MacAlistaire is being chased by a bear in this very cinematic sequence. 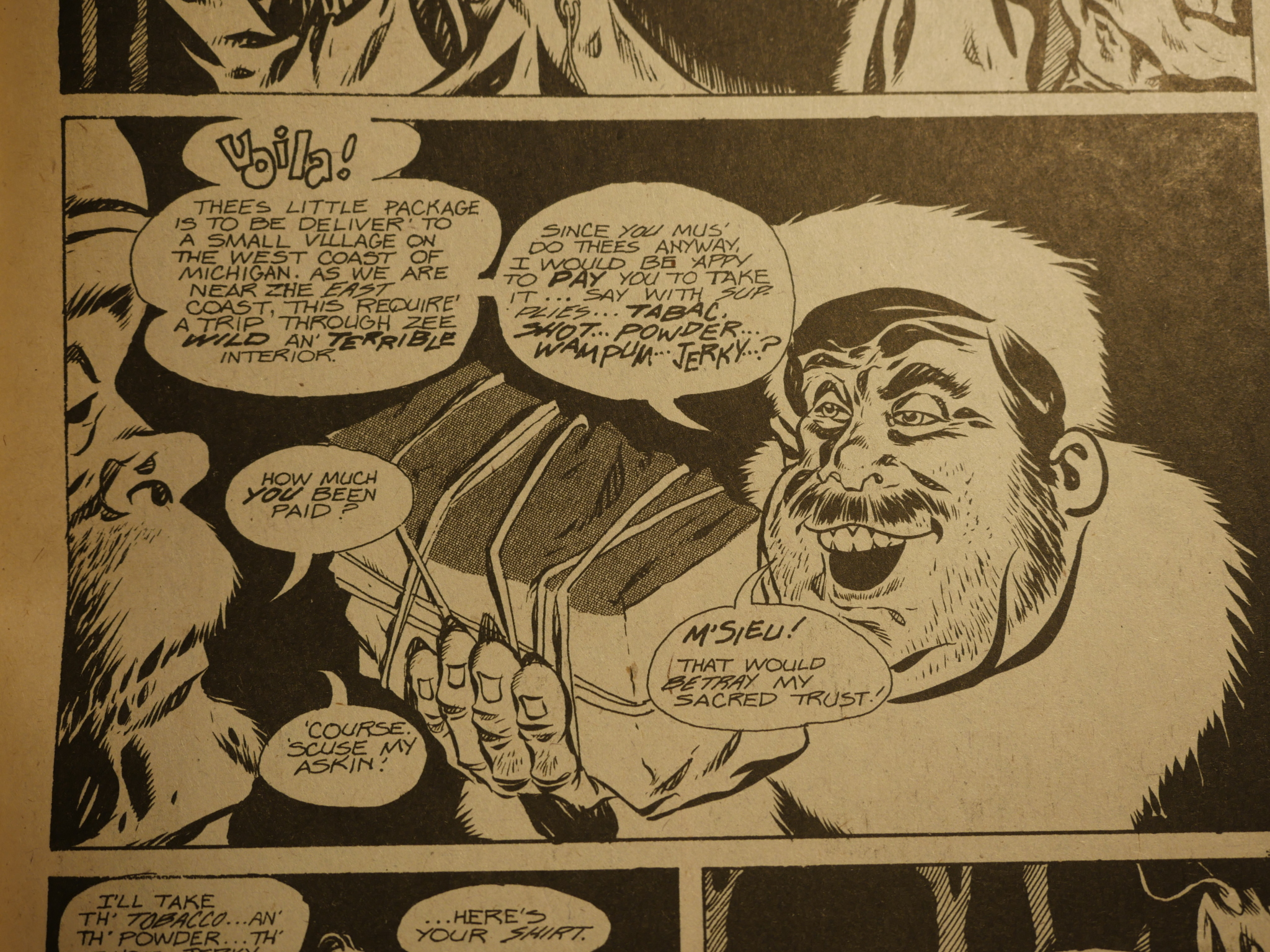 We’re introduced to the MacGuffin that’s the centre of the plot for the 27 issues: MacAlistaire is taking that package to a settlement, and we follow him as he meets people and has adventures.

The artwork is very Will Eisnerish, but applied to the 1812 and wildlife instead of 1950 and city life. It’s really quite special. 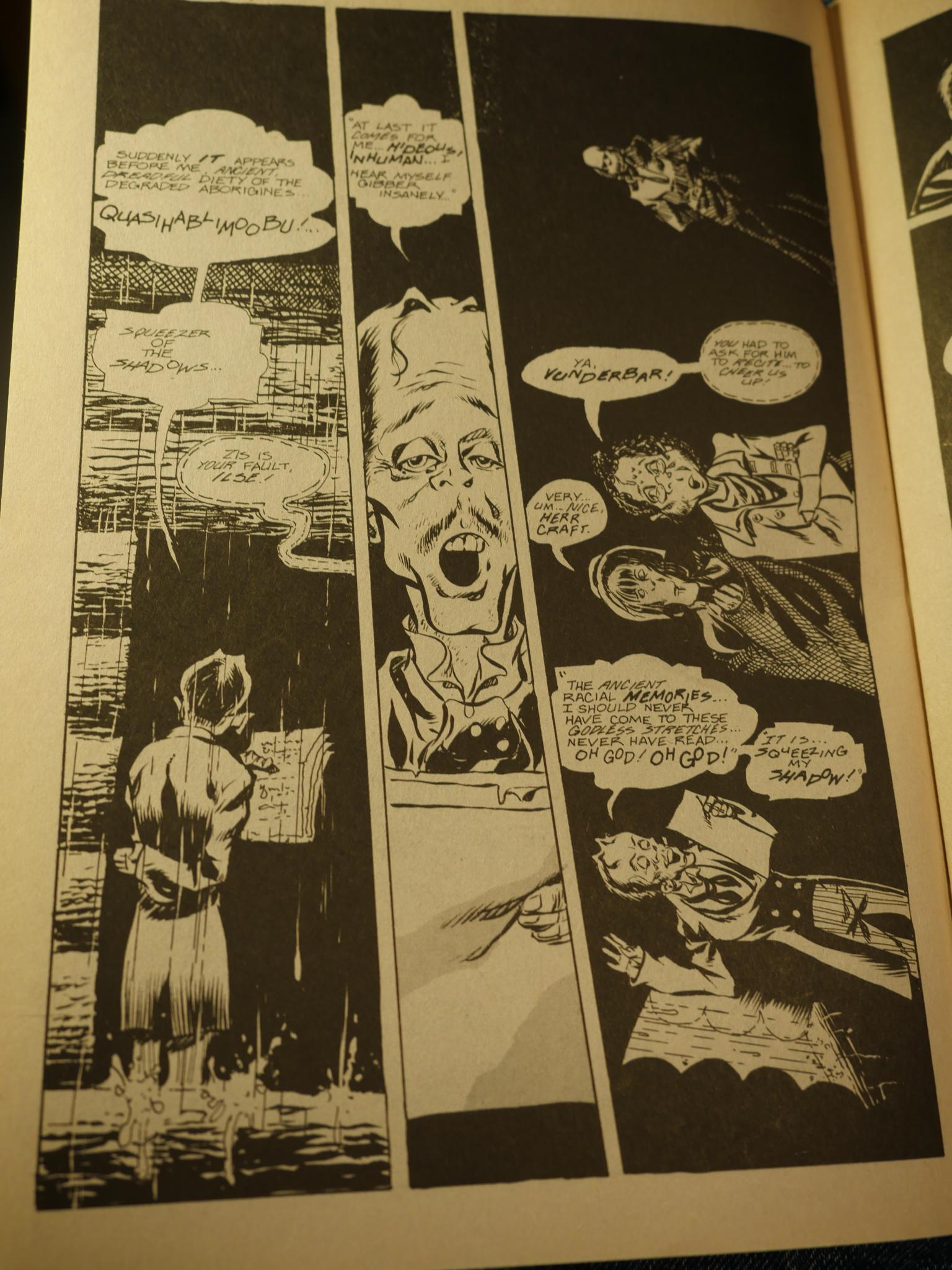 One of the weirder things Messner-Loebs does are these panels that randomly change orientation. He doesn’t do it a lot; just a handful of times, and I’m not quite sure what he’s trying to achieve here… 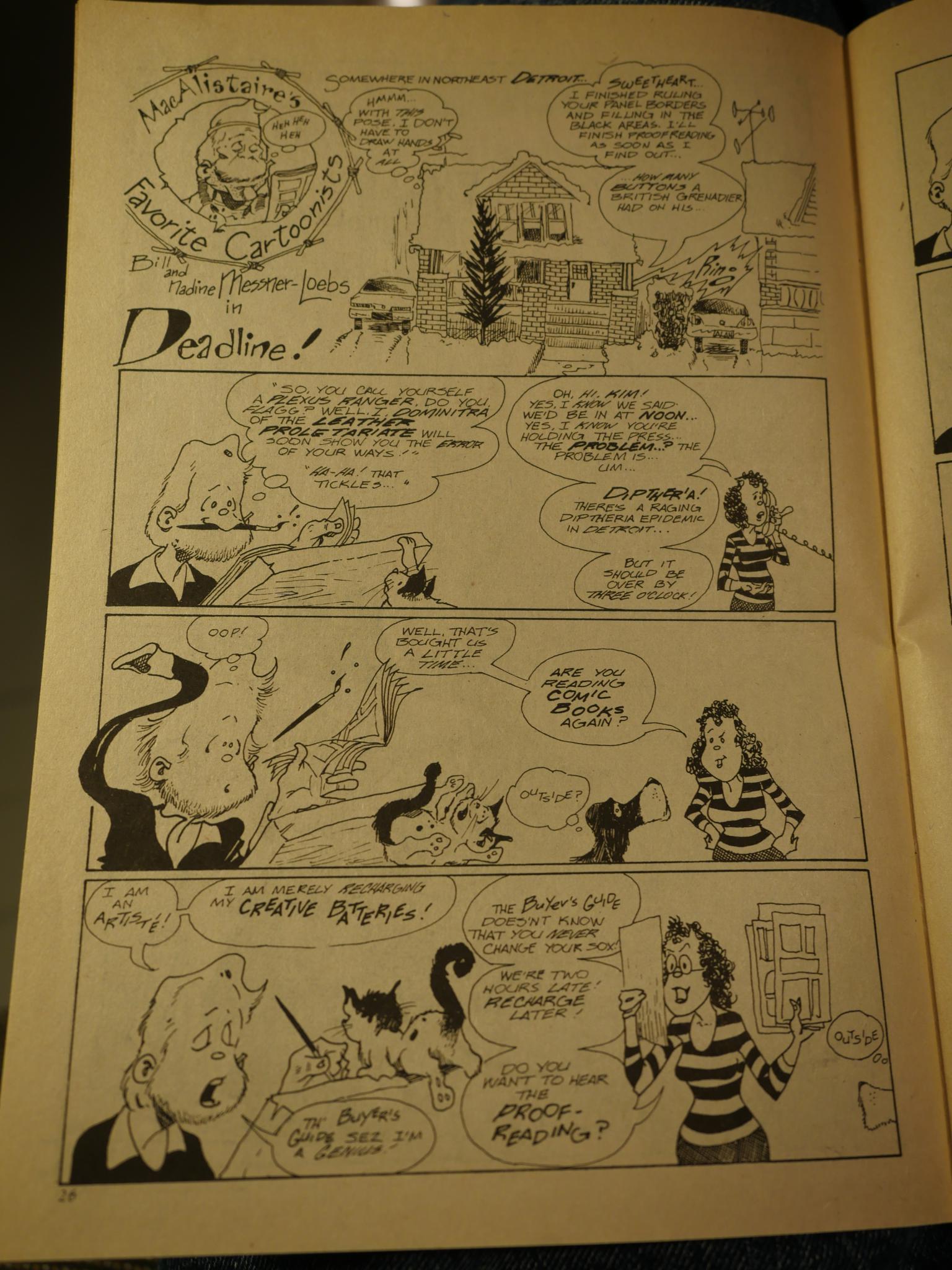 There’s the very occasional backup feature (like this one where he portrays himself and his wife Nadine working on Journey), but the comic book is very dependably 24 pages (or more) of the main feature. 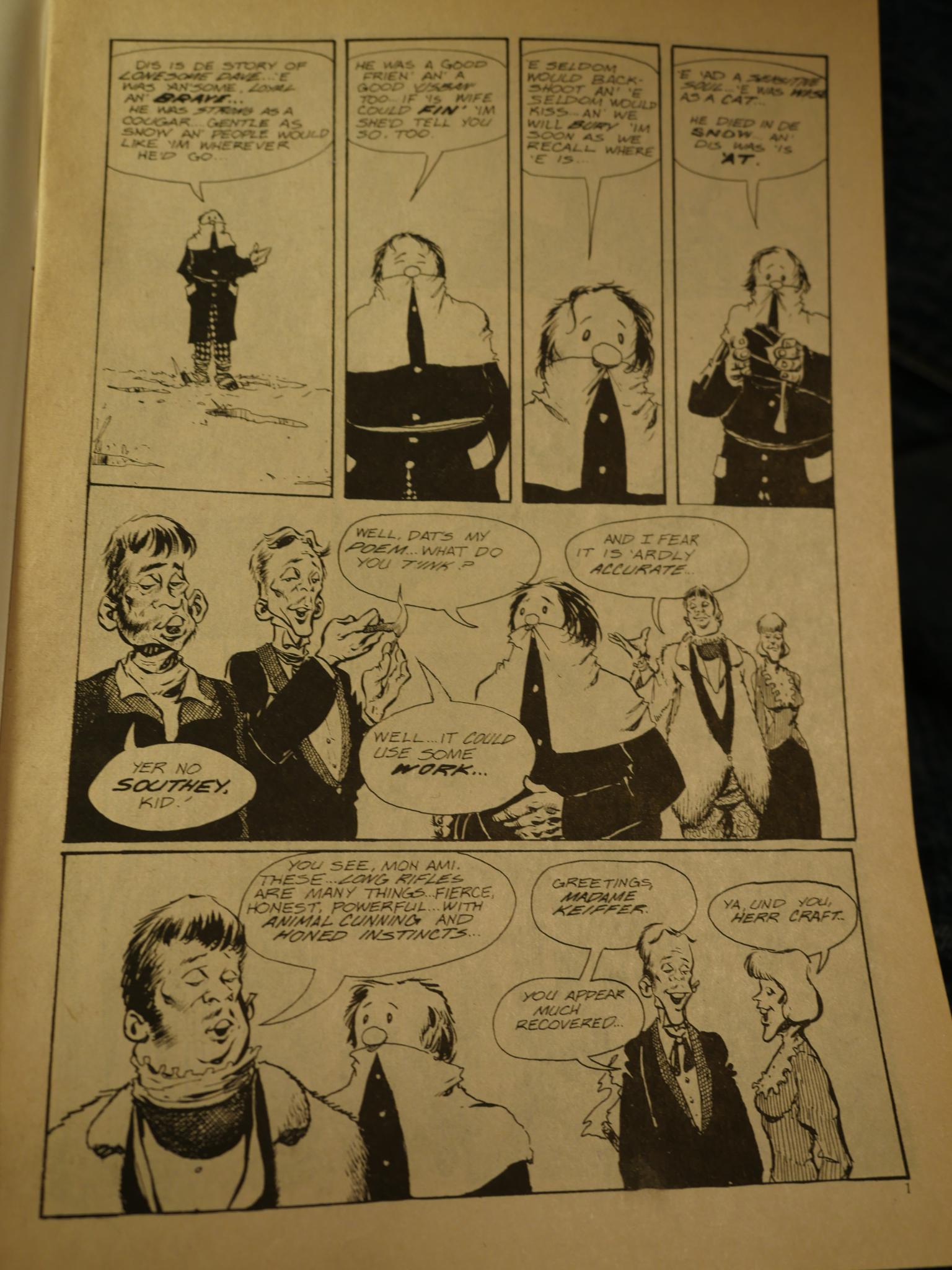 While nature has a central presence in this book, scenes often happen like pictured above: The lack of backgrounds on some pages can be rather bewildering. There’s little clue to where this is happening, and why these people just happen to be standing around. 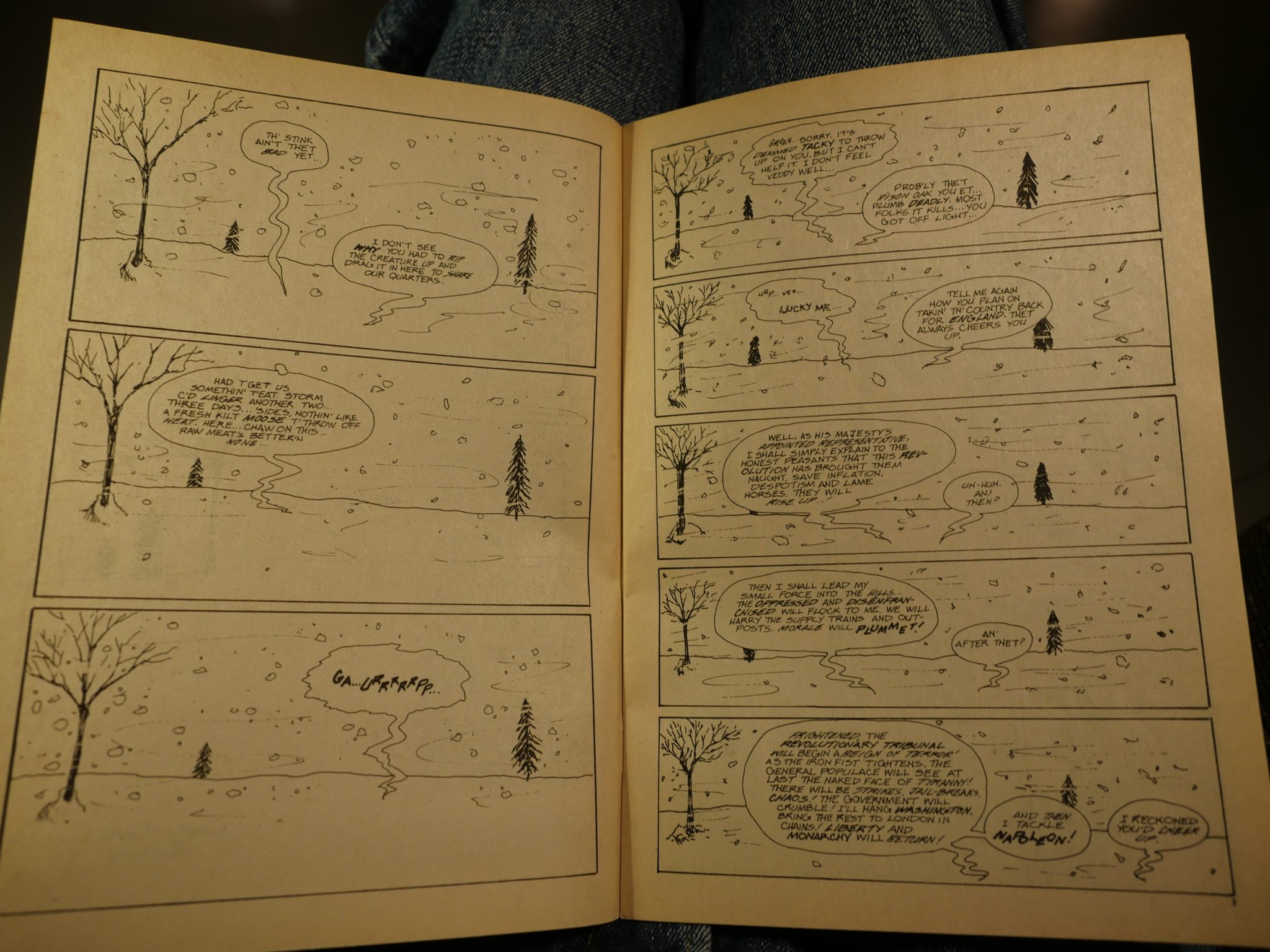 Messner-Loebs also loves putting his characters in thick fog, or like here, buried under snow. So are these things labour-saving devices, or is Messner-Loebs just really, really fond of negative space? 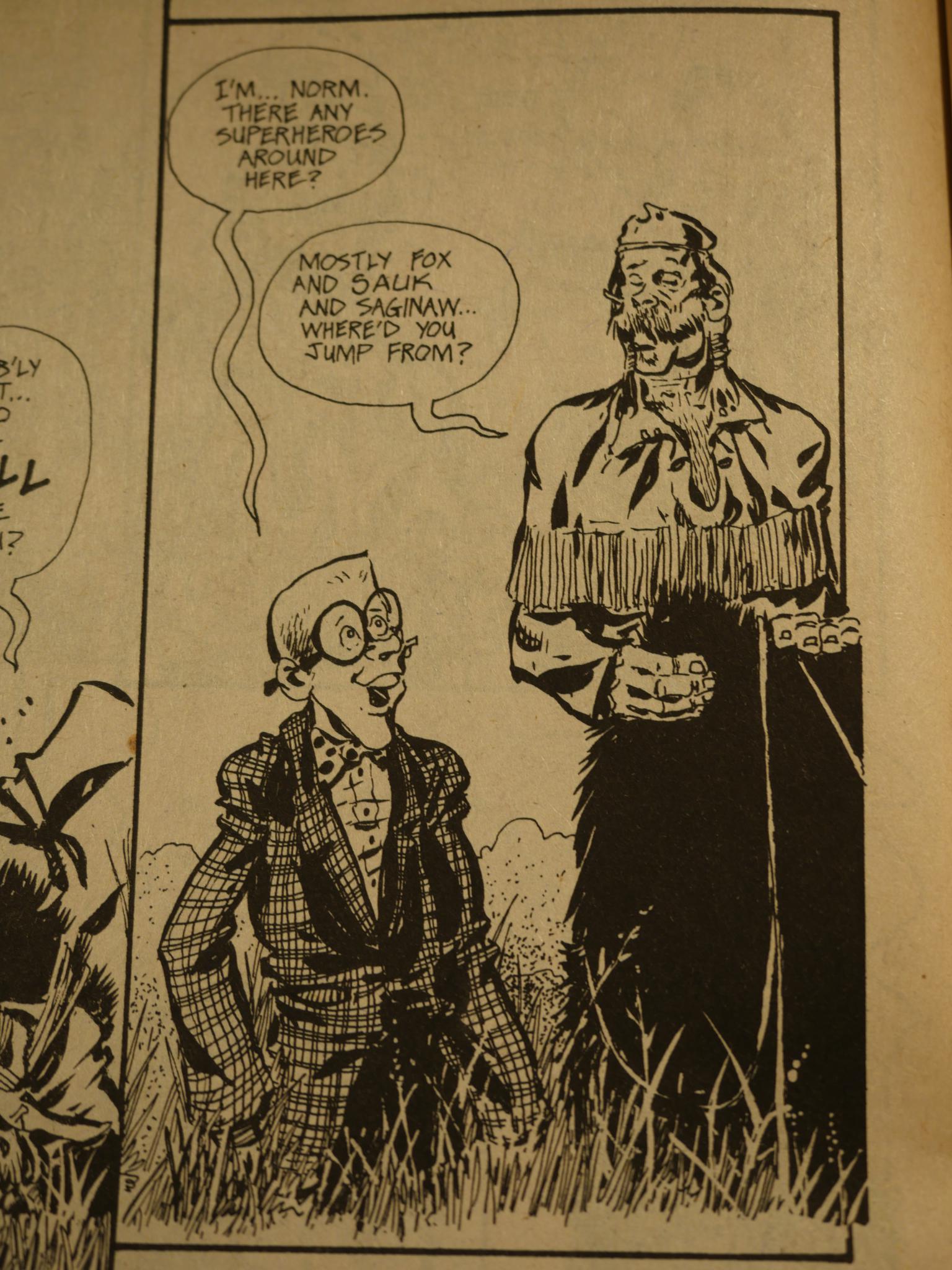 While the book deals with serious issues, it’s also very playful. There are lots of funny bits, and some downright incongruously goofy bits, like this “crossover” by normalman (a character created by Jim Valentino and also published by Aardvark-Vanaheim at the time). Modern readers of the collected version of Journey must have well-scratched heads. 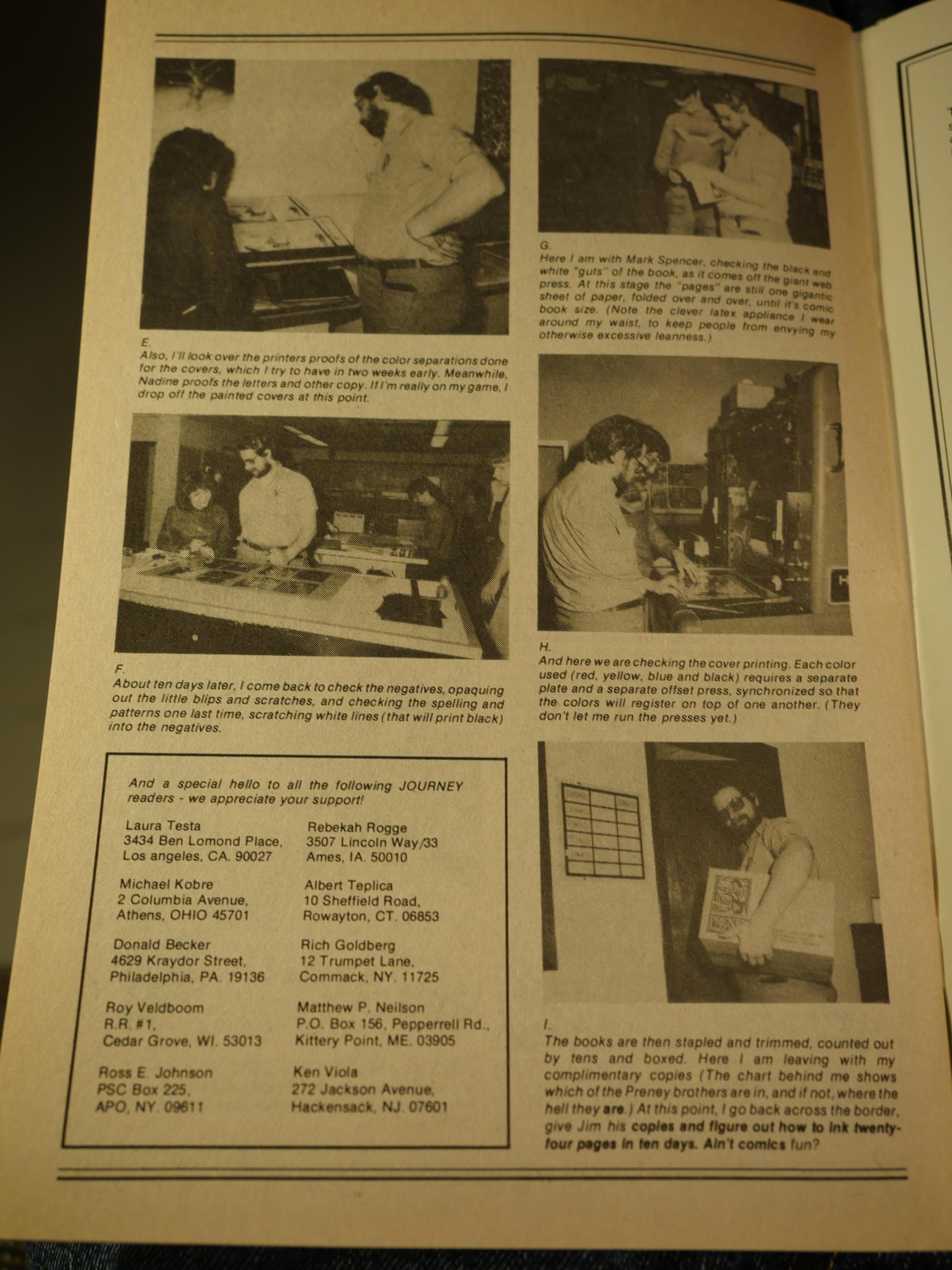 I found this featurette about printing Journey interesting. Apparently, Messner-Loebs drove to Preney Print every month to oversee the printing of the comic book. That’s rather unusual, I think? 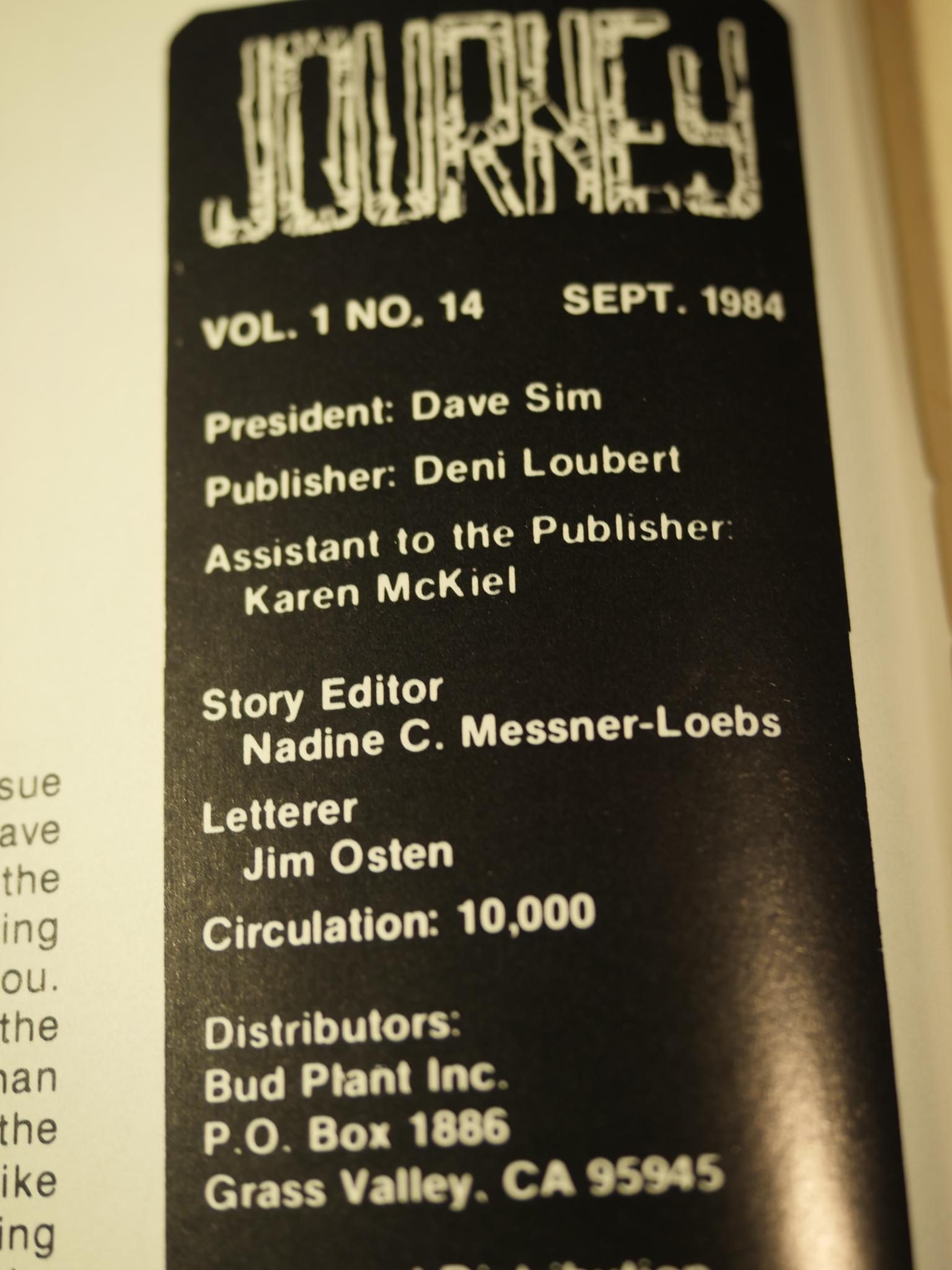 The last two Aardvark-Vanaheim issues of Journey have circulation numbers printed on the indicia page. 10K copies is a respectable number. But I wonder why just the two last issues have this information printed? Is it in any way connected to Messner-Loebs leaving Aardvark-Vanaheim to go to Fantagraphics, which was apparently a difficult divorce? 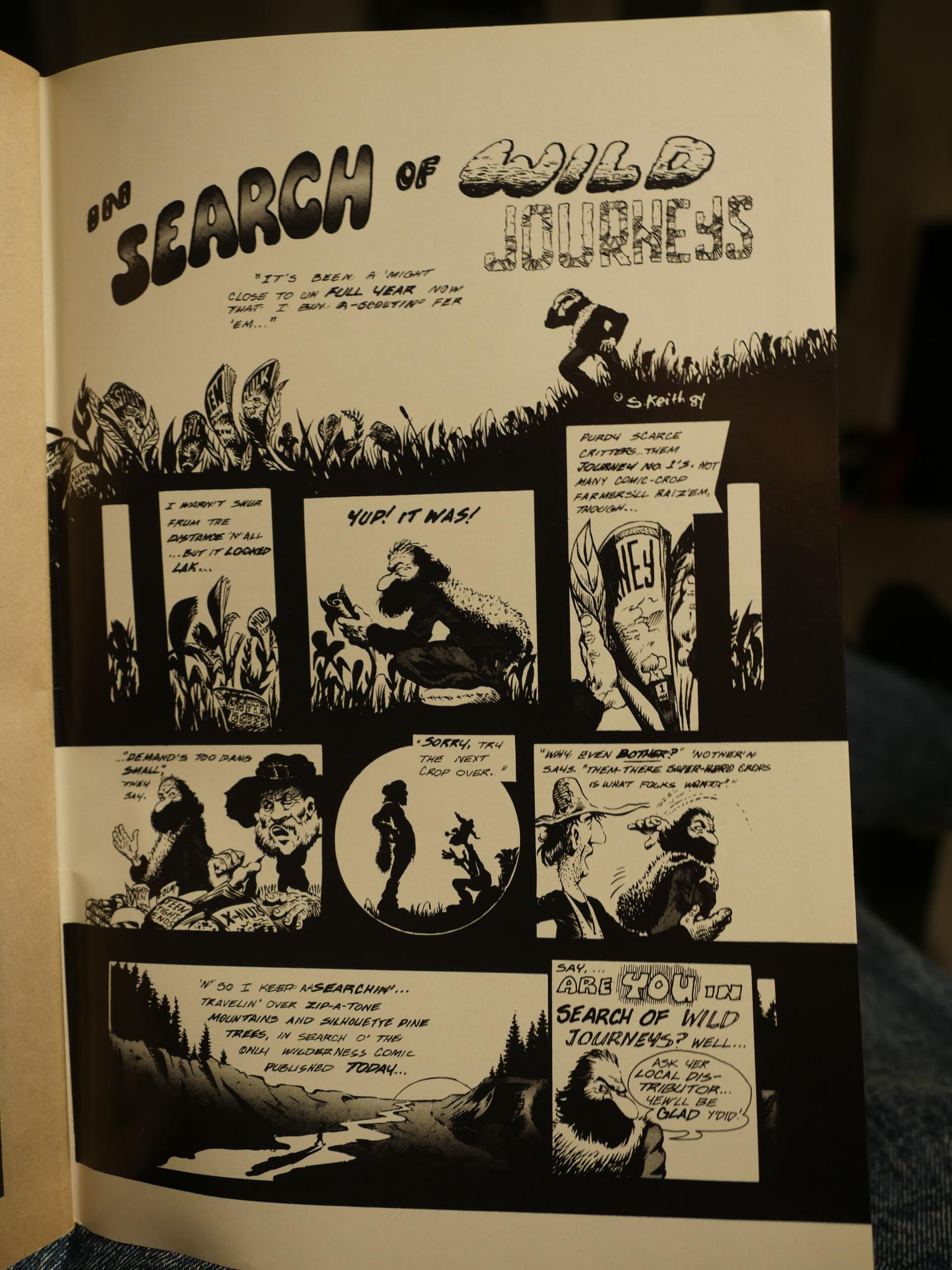 Hey! An early Sam Kieth page! Messner-Loebs would later go on to write the dialogue for Kieth’s The Maxx series. 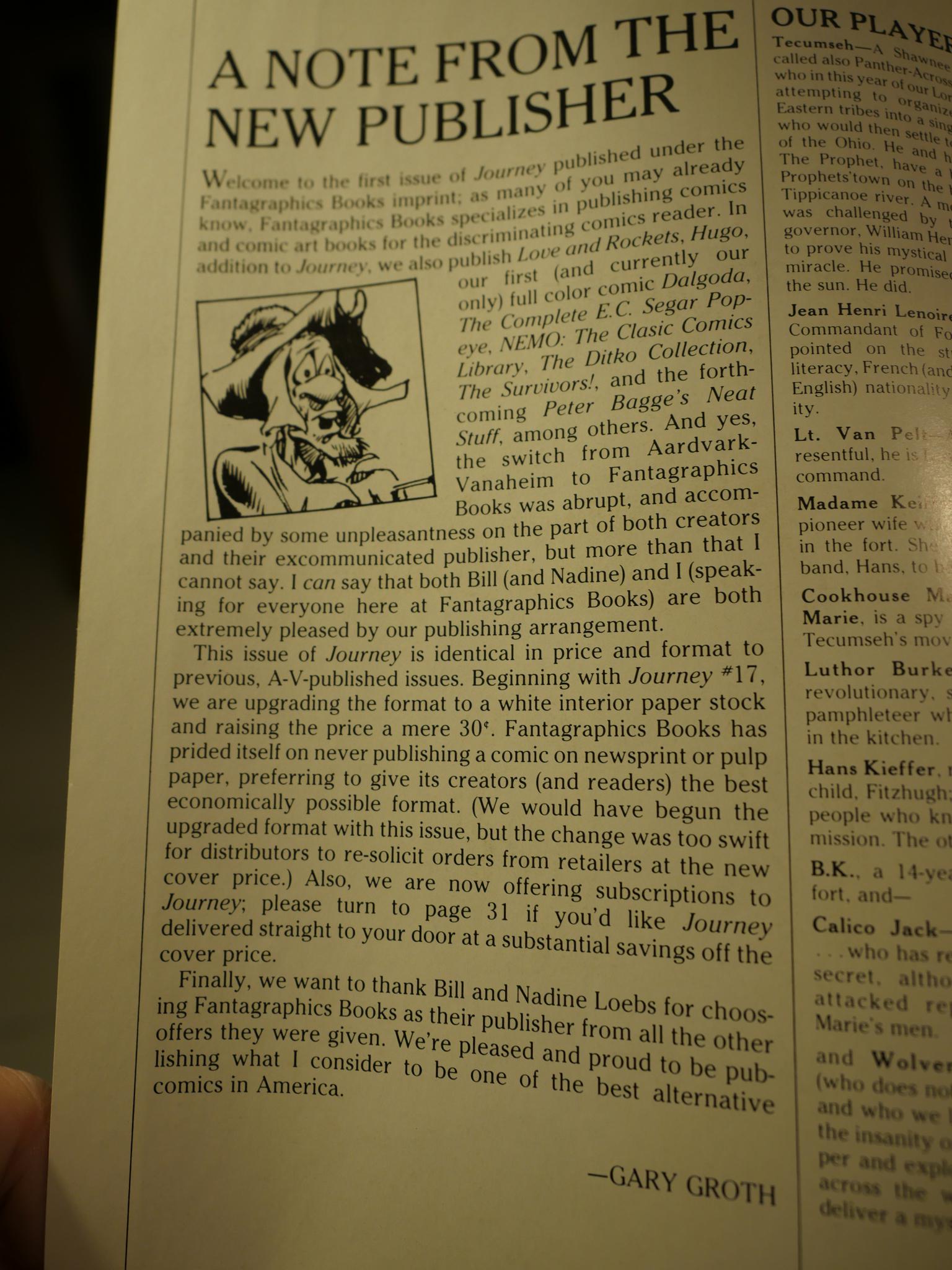 And then, we finally move over to Fantagraphics with issue 15. Gary Groth explains that there had been some unpleasantness, and that subsequent issues would no longer be on newsprint. 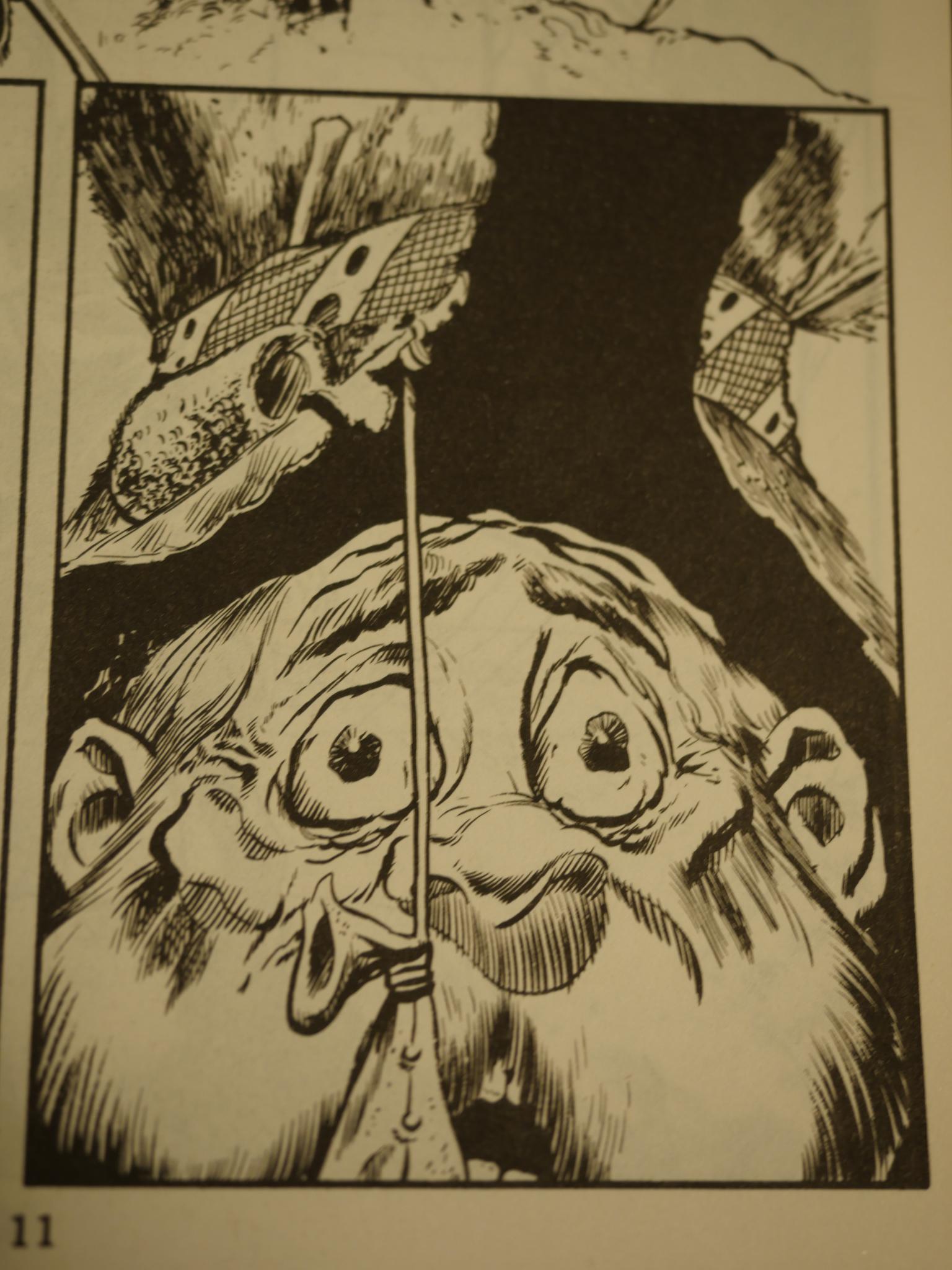 And the whiter paper does suit Messner-Loebs’s art quite well. The blacks look blacker and nicer. But, on the other hand, you get more bleed-through, so…

Oh, I haven’t said anything about, like, plot and stuff…

It reads very much like Messner-Loebs has had the main plot of the book plotted out quite well in advance. There are hints made in the first issue that aren’t resolved until the twenty-sixth issue. But if that’s the case, it’s a somewhat oddly structured tale. Some issues don’t have MacAlistaire in them at all, and instead we follow the machinations behind a native uprising in a nearby fort. The shift happens organically, in that we’re following characters that MacAlistaire has encountered, but it’s still rather odd. 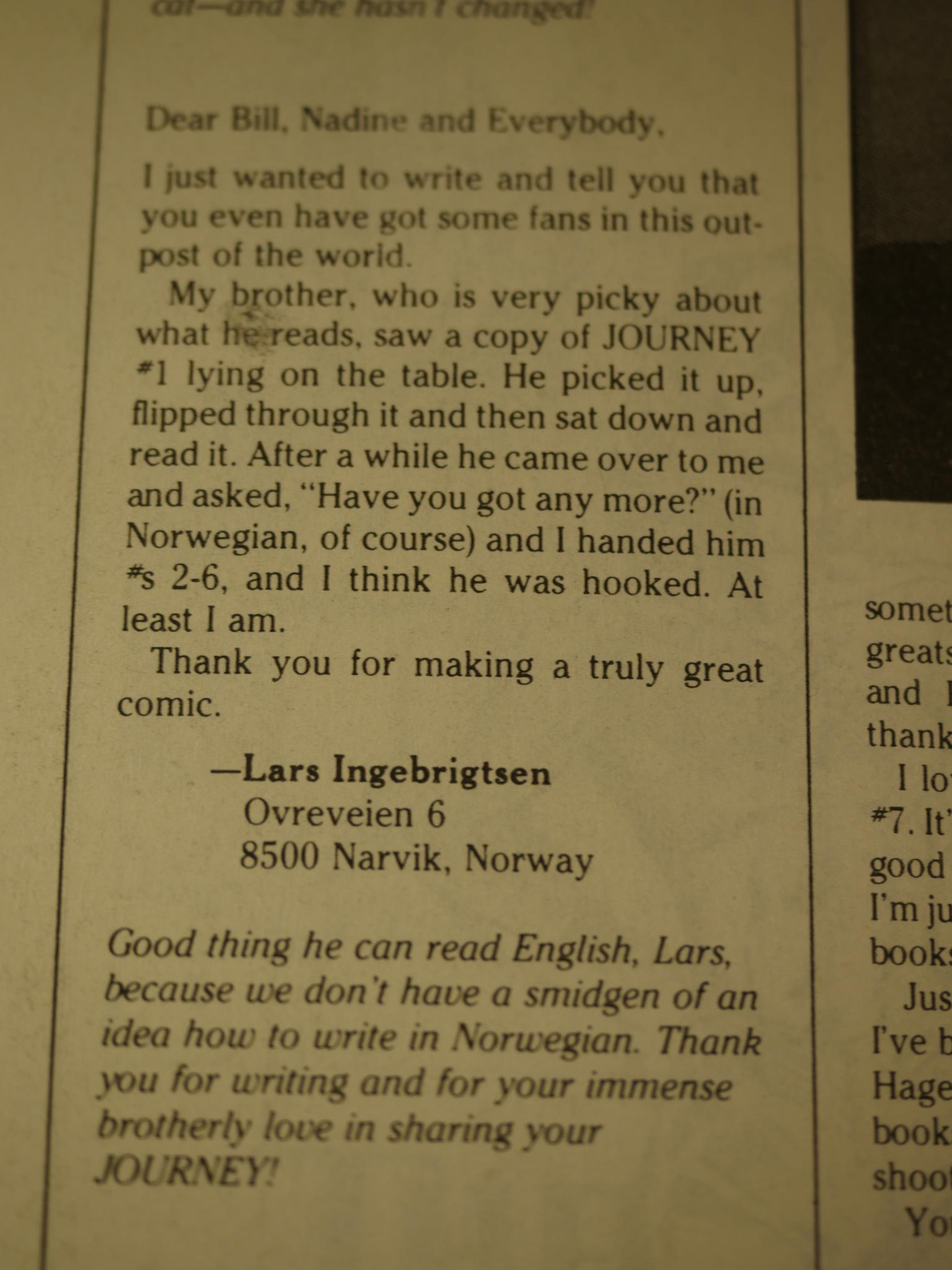 Eep! Apparently I had written a fan letter! I had completely forgotten that! How embarrassing. 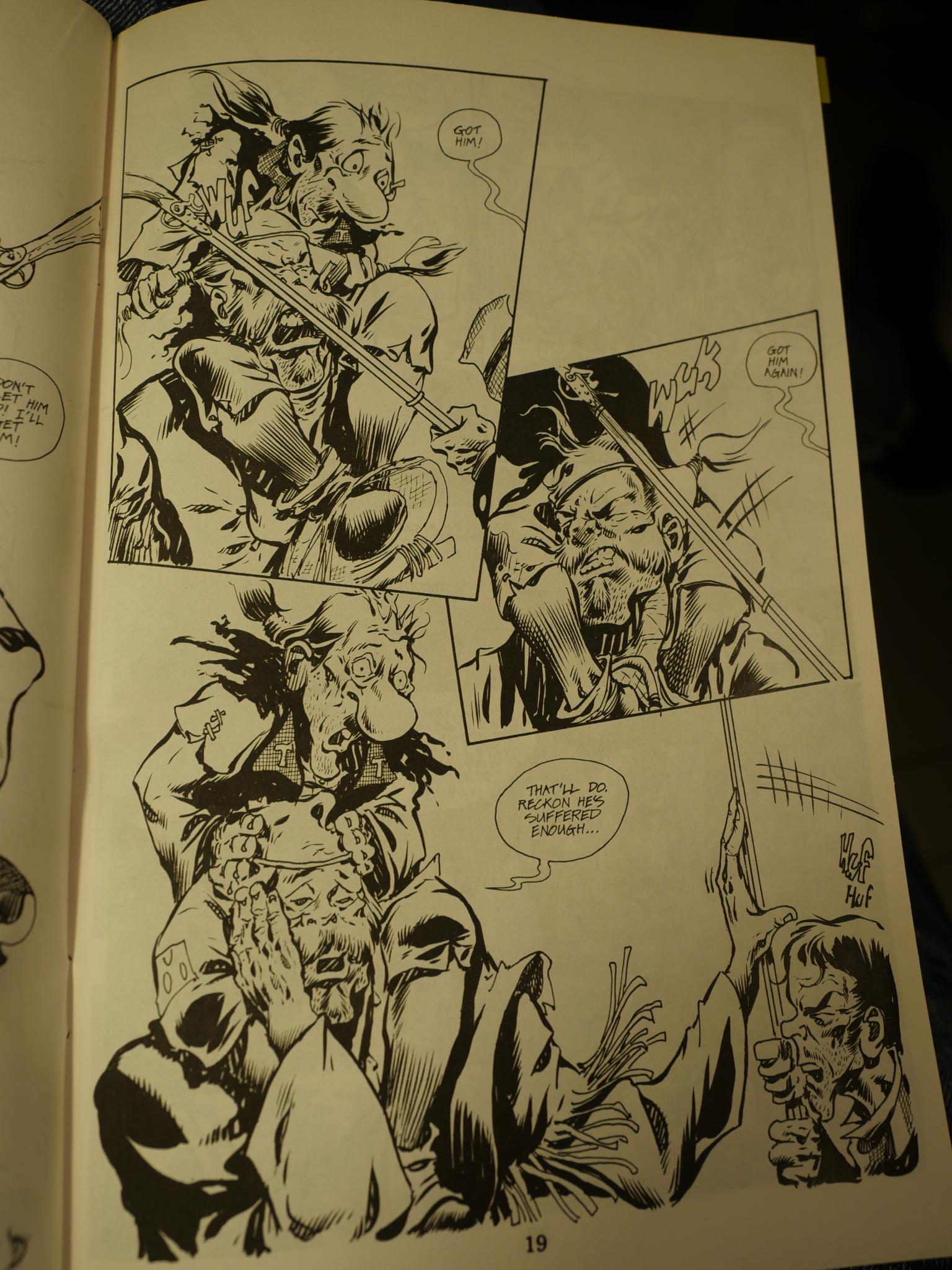 Journey is, of course, a manly tale of manly deeds, but it’s also a lot like this stuff. (The guy who’s hitting is trying to help MacAlistaire.) It’s just such a pleasant reading experience: The mixture stops things from growing boring. Sometimes Messner-Loebs helps out by partitioning panels and thereby making it obvious that we should read horizontally in this instance. I think it works quite well. Everybody loves a critic. Oh, yeah, this was around the time of the controversy over Jack Kirby’s original art. Messner-Loebs supports the boycott, which probably didn’t make him very popular over at Marvel. And then we come to the final issue, which has a different, coarser look than previous issues. Drawn smaller, perhaps?

The last issue of the series is a good final issue. It’s a proper ending, and not too many important things are left in the air, no matter what that character up there is saying.

The final story arc is good, but it’s perhaps the weakest arc in the series. It’s about a small community with too many generations of similar-named characters and deep, dark secrets involving murder, rape and abuse. So it’s the most conventional story arc by far, and some of the shocking reveals feel slightly clichéd.

It’s good, but I think the, er, nineish first issues are the strongest ones. I mean, they’re rather wonderful, and I want to re-read them again right now. They have an amazing atmosphere; a world that feels both real and magical. The Messner-Loebseses participated in Hands Across America. Messner-Loebs announces that Journey is cancelled, but will return as a series of limited series. A note from Gary Groth is also included in the last issue, where he notes that he believes that comics historians will look back on Journey as one of the major achievements of the 80s. I’m afraid that’s probably not true. It has mostly been out of print, but I think that currently there’s an edition from IDW that’s possible to buy. But it’s not a series that I see referenced a lot. One year later, as promised, the first Journey mini-series, Wardrums, is printed in sepia. Hm… I think I would have chosen a different colour. It’s too washed-out, and it doesn’t look very natural. Then three years pass, and the next issue of Wardrums is published. Messner-Loebs explains that he’s gotten a lot of work writing super-heroes over at DC, and just haven’t had time.

I remember buying his super-hero series, and they weren’t bad or anything, but they were just … normal super-hero series. Hm… perhaps The Flash had more mundane stuff in it than most, but I remember finding the artwork somewhat unpleasant. So I stopped following his career at this point. Oh, and the second Wardrums issue is not printed in sepia, but is instead printed on newsprint with black ink. An explanation for this is not proffered.

The second issue ends with a cliffhanger. No further issues were ever published.

Messner-Loebs has gone through hard times the last couple of decades, apparently. Buy the Journey collections.