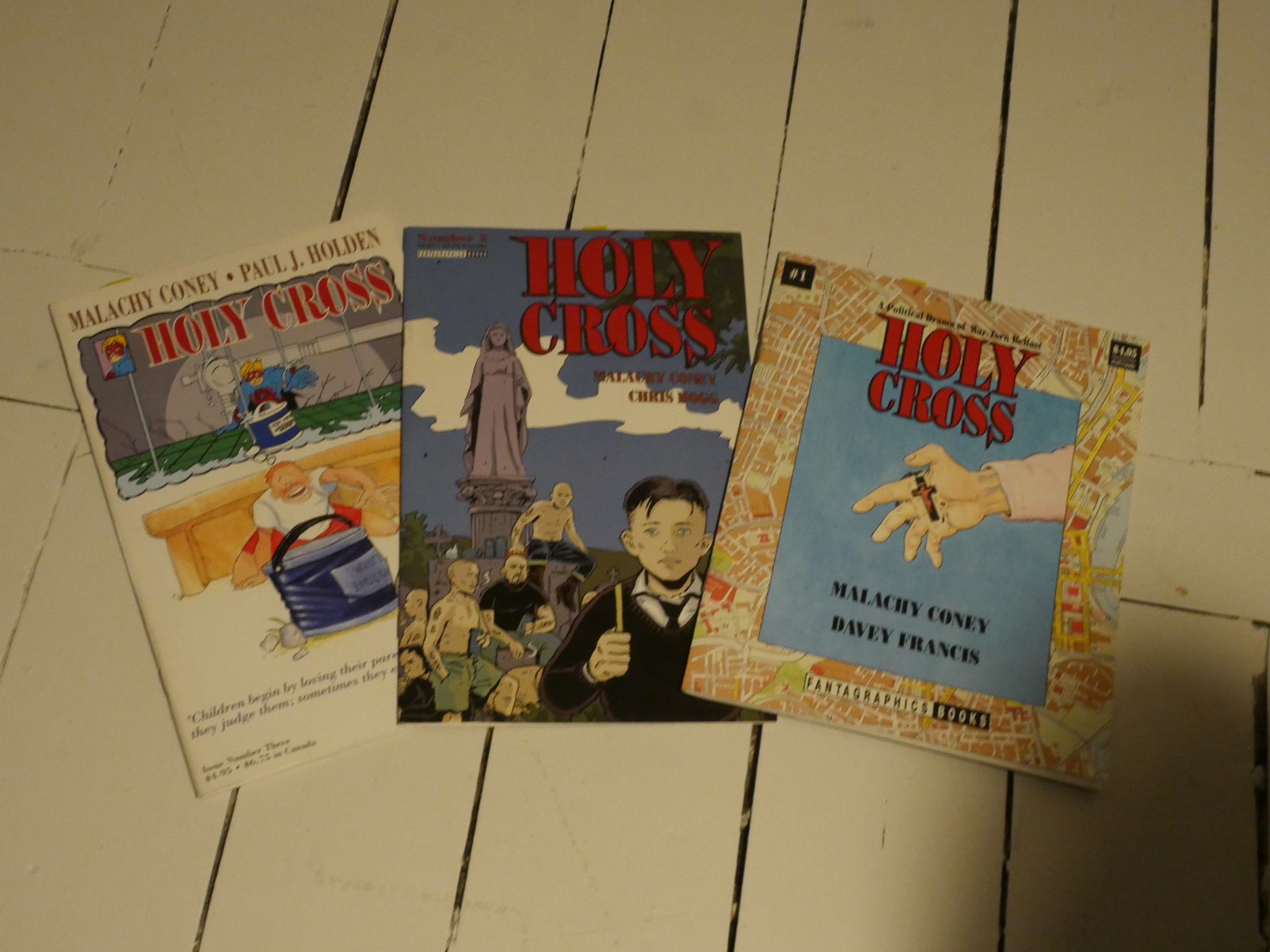 Well, this is an odd series. It’s written by Malachy Coney and drawn by three different people; it’s set in Belfast during the troubles; every issue is of a different size; and it’s three separate but somewhat interconnected stories. 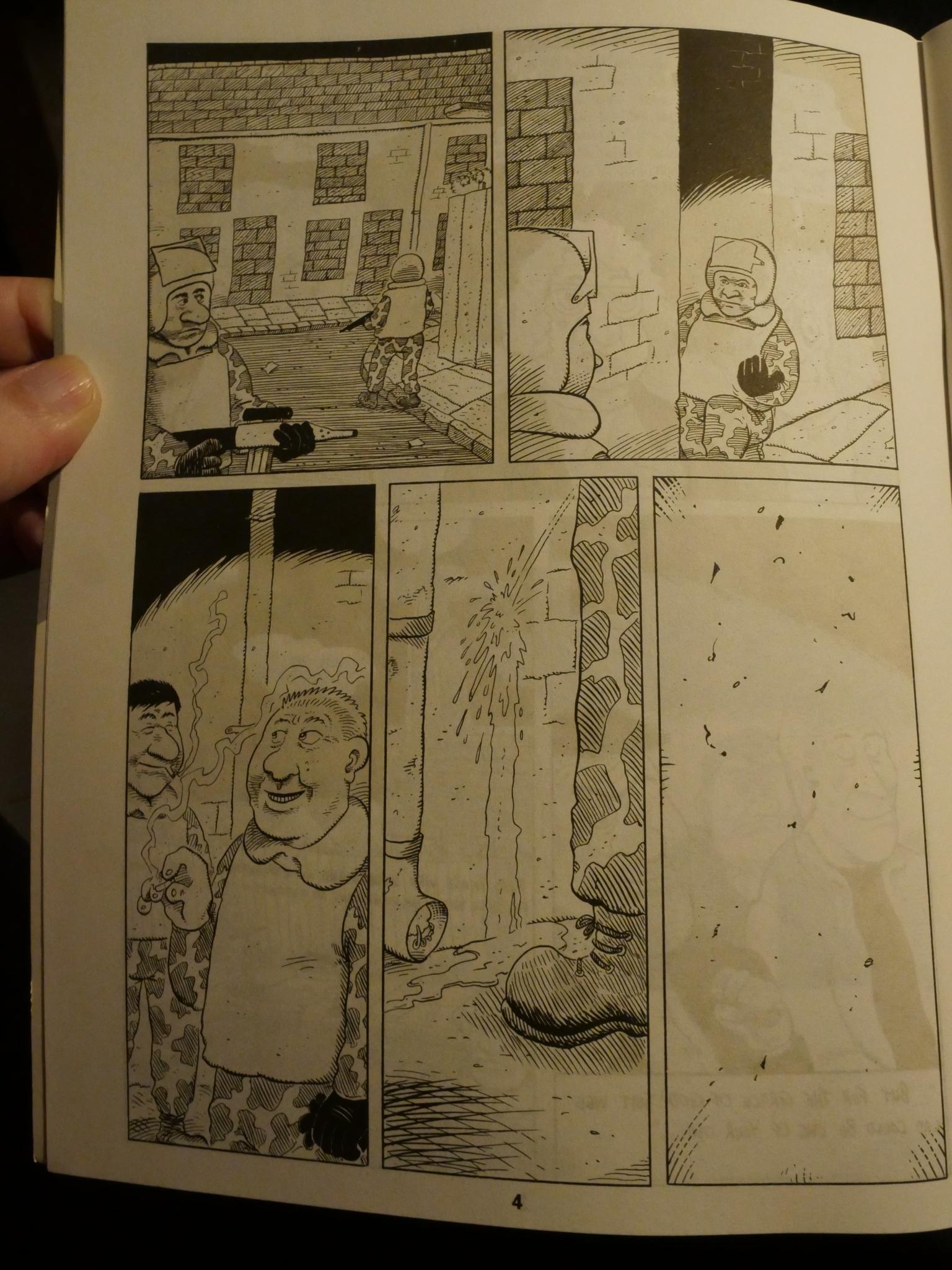 The first issue, shorter and wider than a standard US comic book, is drawn by Davey Francis in a quite cartoonish style somewhat at odd with what’s going on. If you can’t tell, there’s two soldiers going for a smoke and a piss in an alley, and then there’s an empty panel. Or it’s supposed to be, but the issue was printed on one-ply toilet paper, so you’re looking mostly at whatever’s on the previous or next page as much as on the current page. Bleed-through-o-rama.

(The empty panel was supposed to signify that a bomb went off.) 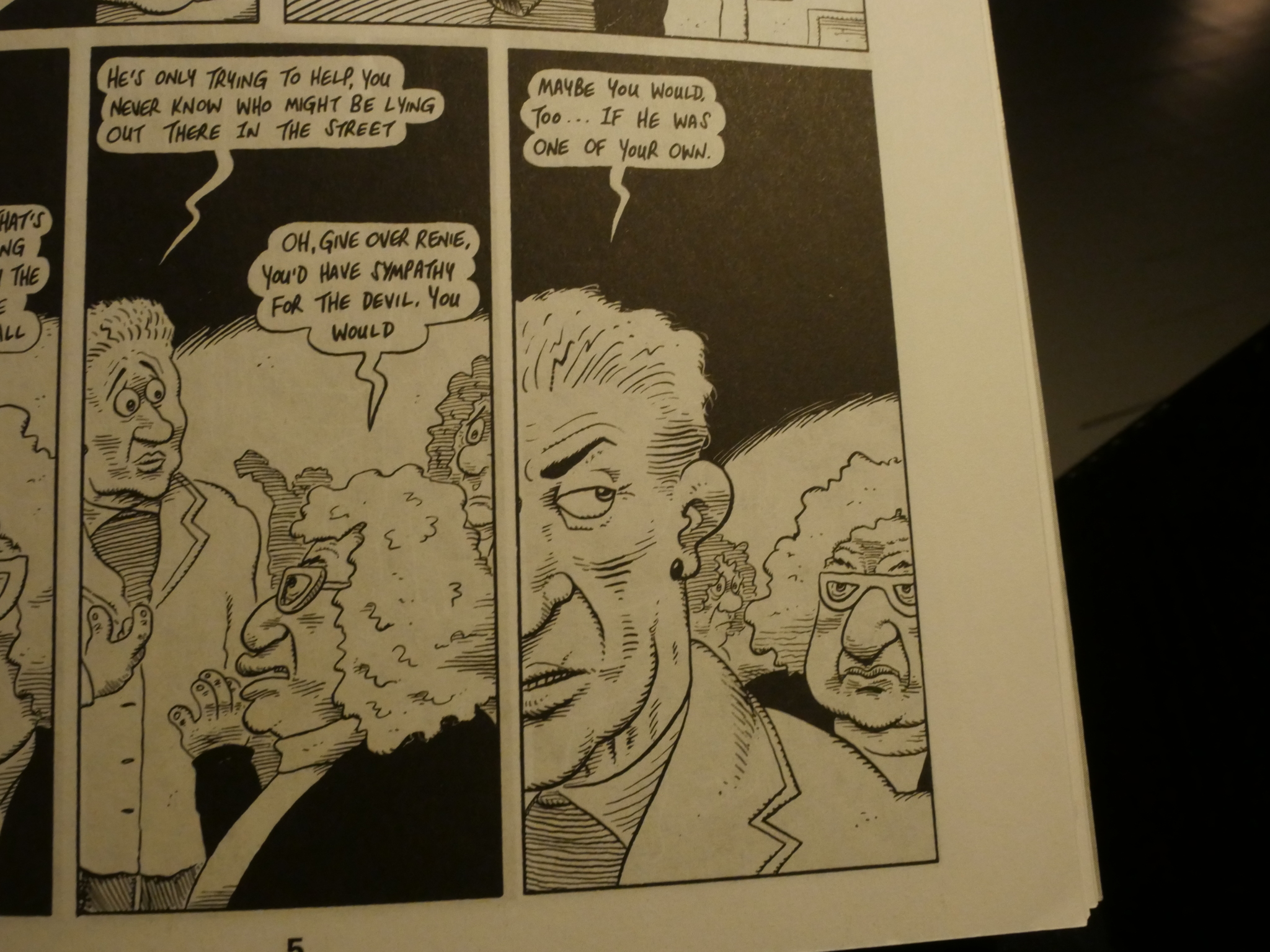 The dialogue sometimes seems like a stream on non sequiteurs, or otherwise foreshadowing that doesn’t really make any sense. 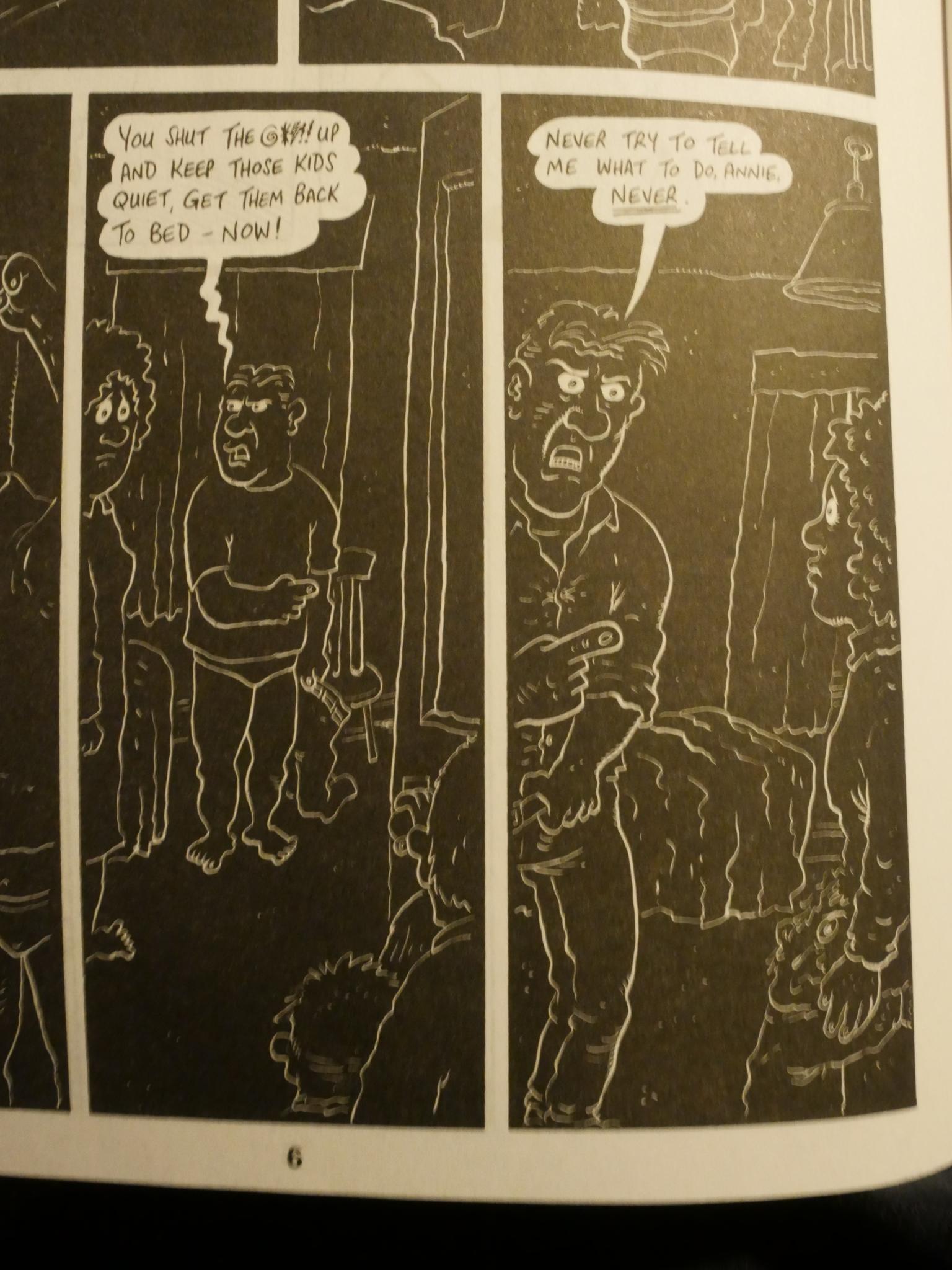 Yes, that’s how you draw a scene in a dark room. 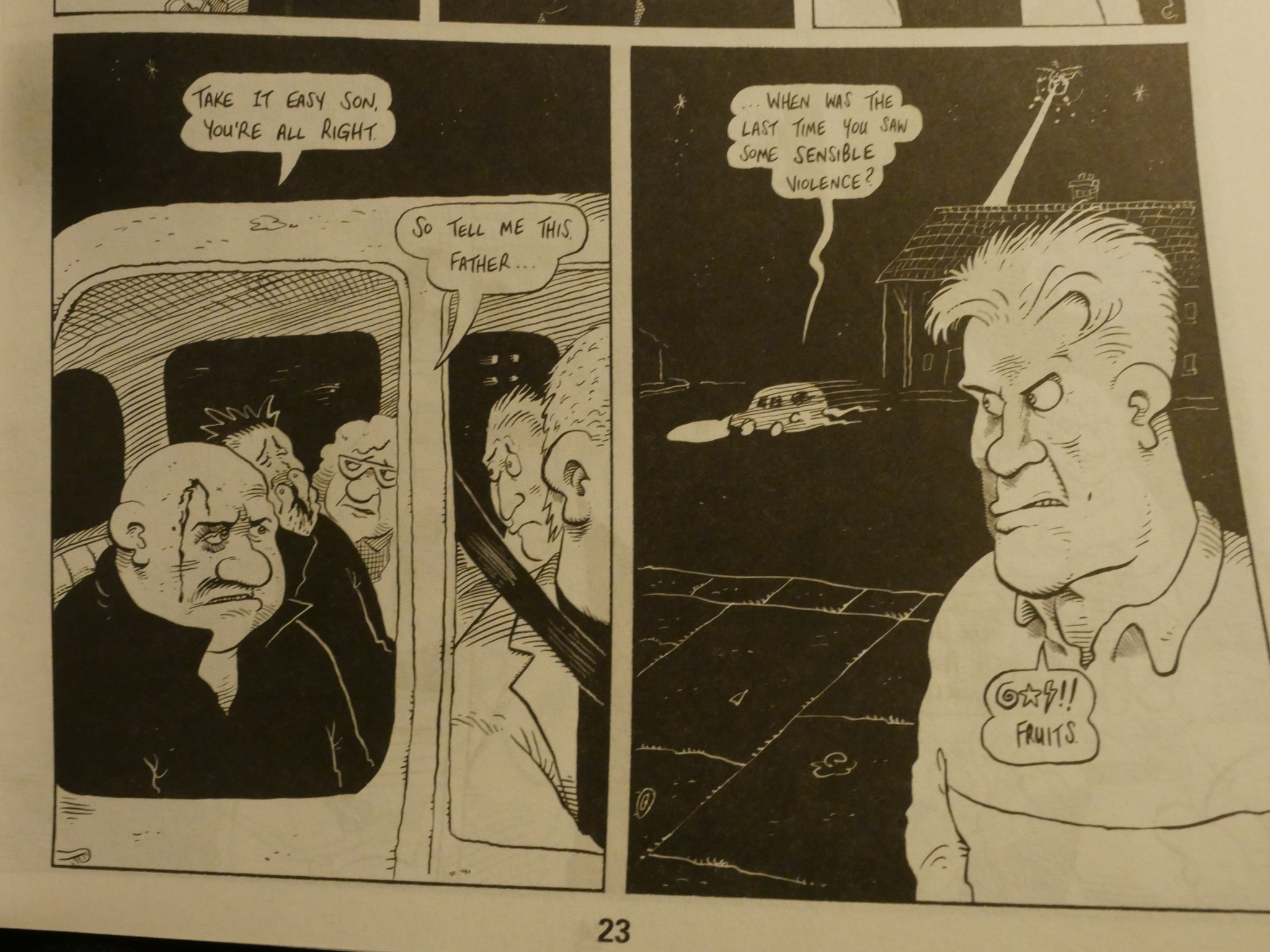 Note dialogue cropped from rejected Irish greeting cards. Or, when they’ve been collected, Irish movies about… well, anything.

Oh, the story? Somebody is running around raping old women and a vigilante mob forms. Hilarity doesn’t ensue. And the big reveal at the end reveals exactly the one you thought was going to be the rapist since the first time he appeared. 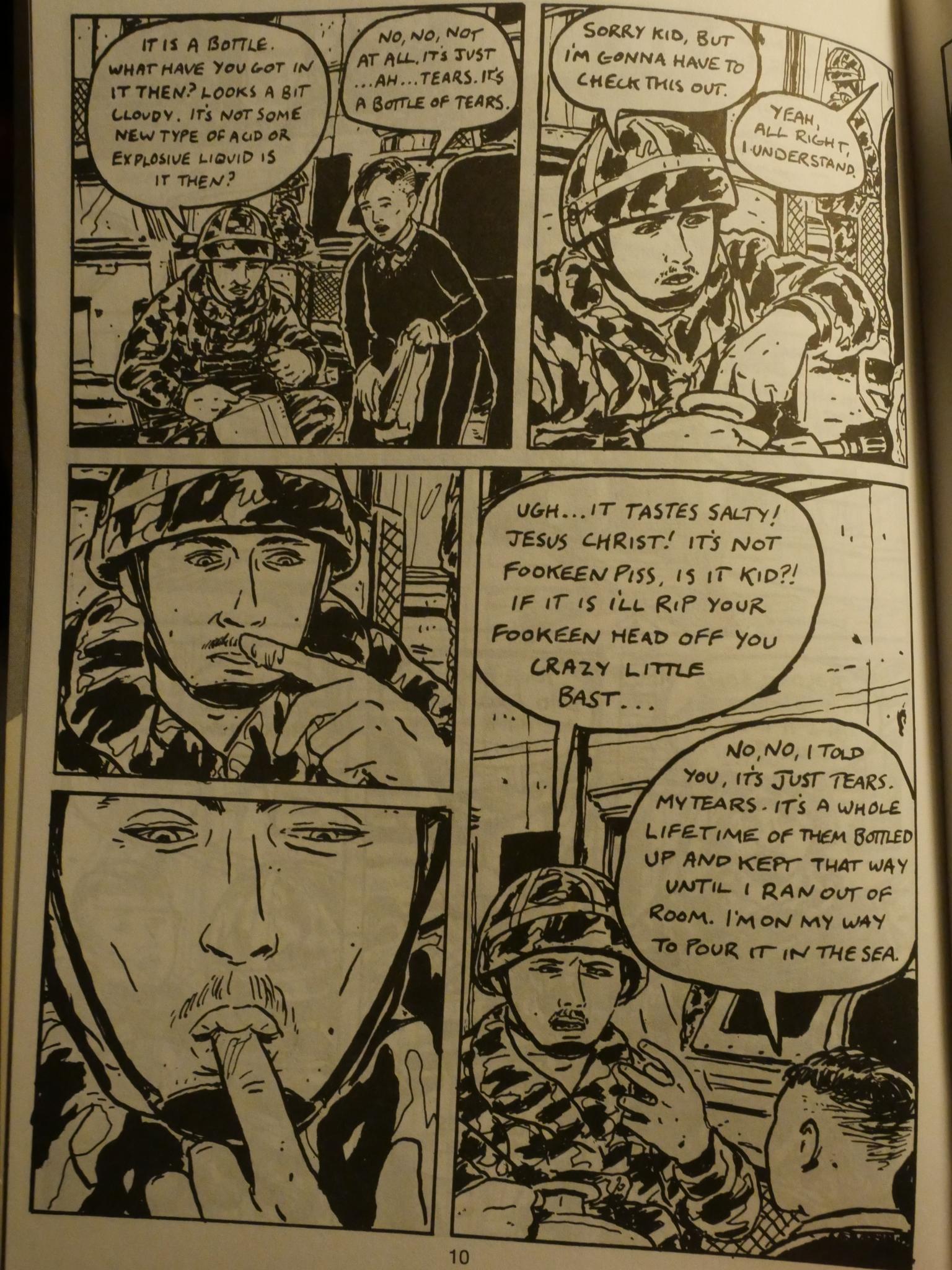 It’s a short, standard-size comic book, and the artist is Chris Hogg, and it’s rather appealing. It’s got a lively line and convincing characters. The plot, however, is about a boy who has saved all his tears in a big ol’ jug and is taking the aforementioned jug of tears to the river (while his aunt wants to send him away to priest school). Did I mention the jug of tears? 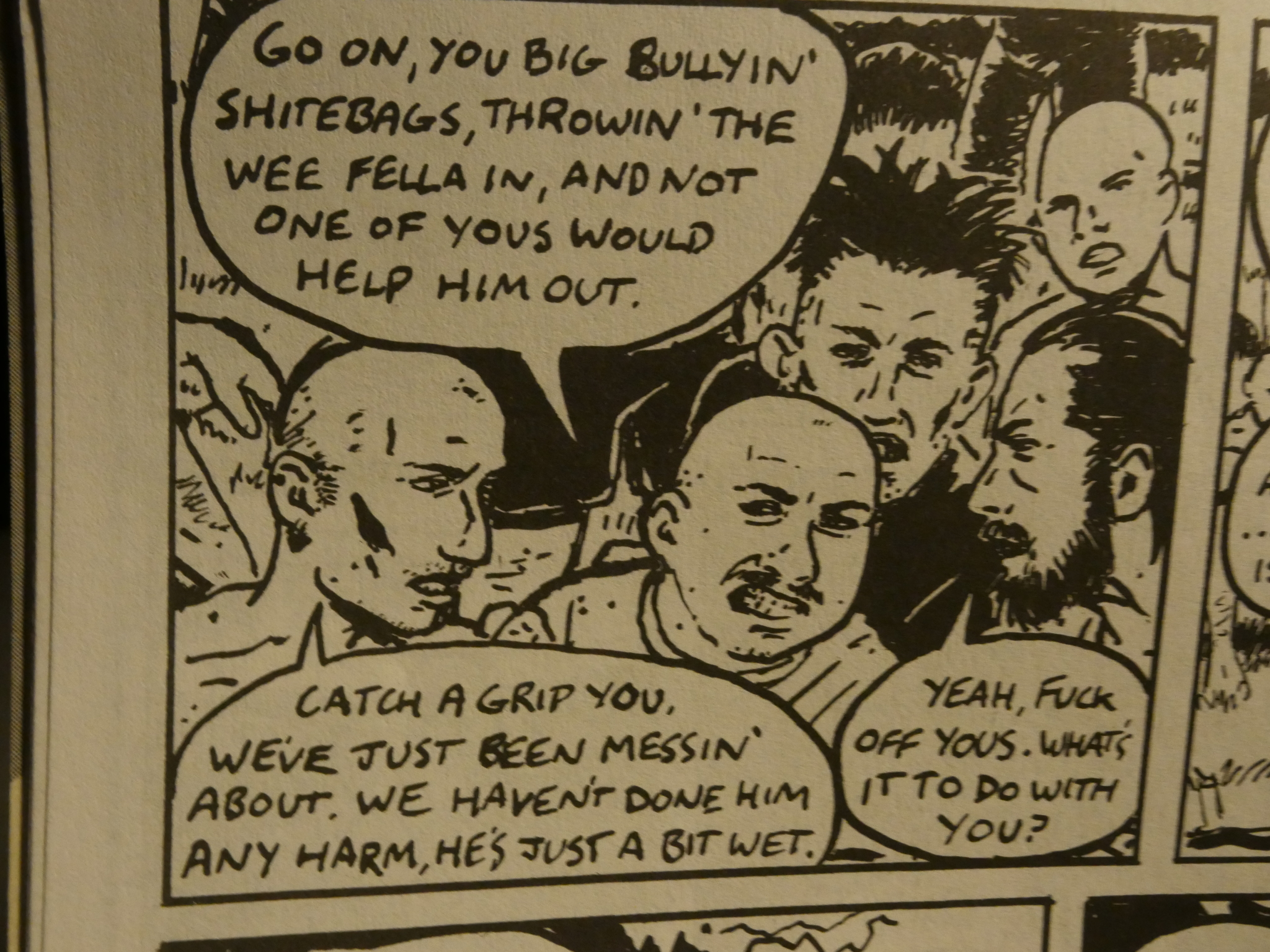 The lovable drunks from the first issue make a guest appearance.

It’s really hokey (let me solve the allegory for you: Gay boys shouldn’t become priests), but it’s saved by the artwork. Not too bad. 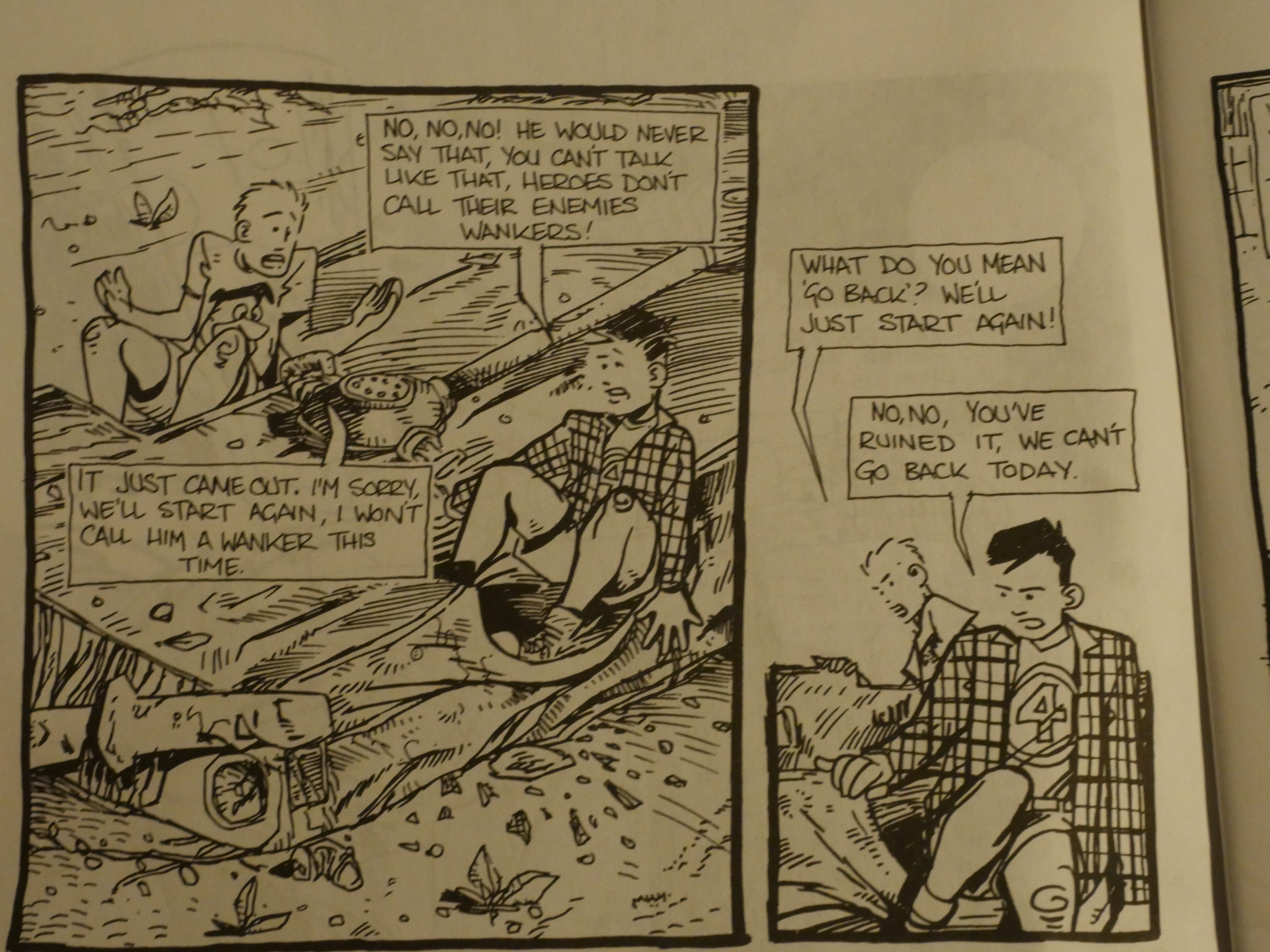 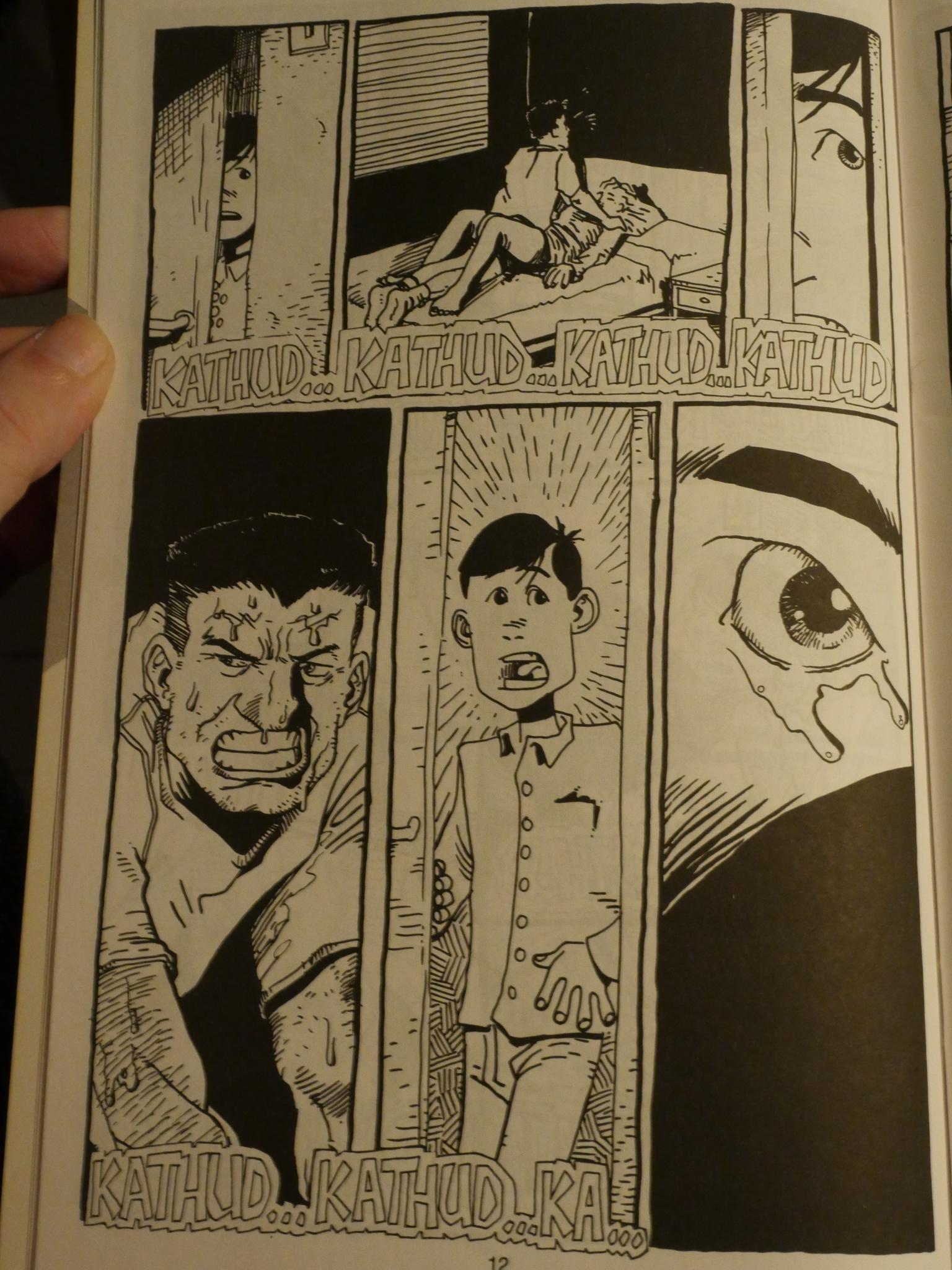 The story this time is about a boy (see above) who’s being beat up a lot by his father (see above) while his mother (squint above) doesn’t do much to protect him (the boy, that is (SO MUCH TRAUMA FROM THIS SCENE)). Meanwhile the boy’s even wimpier friend (see below) tries to get him to get help, but burns up in the comic’s climax to teach the boy (the one above) a lesson about life or something, because the wimpiest boys (see below) always have to die. And then the boy (see above) Mans Up. 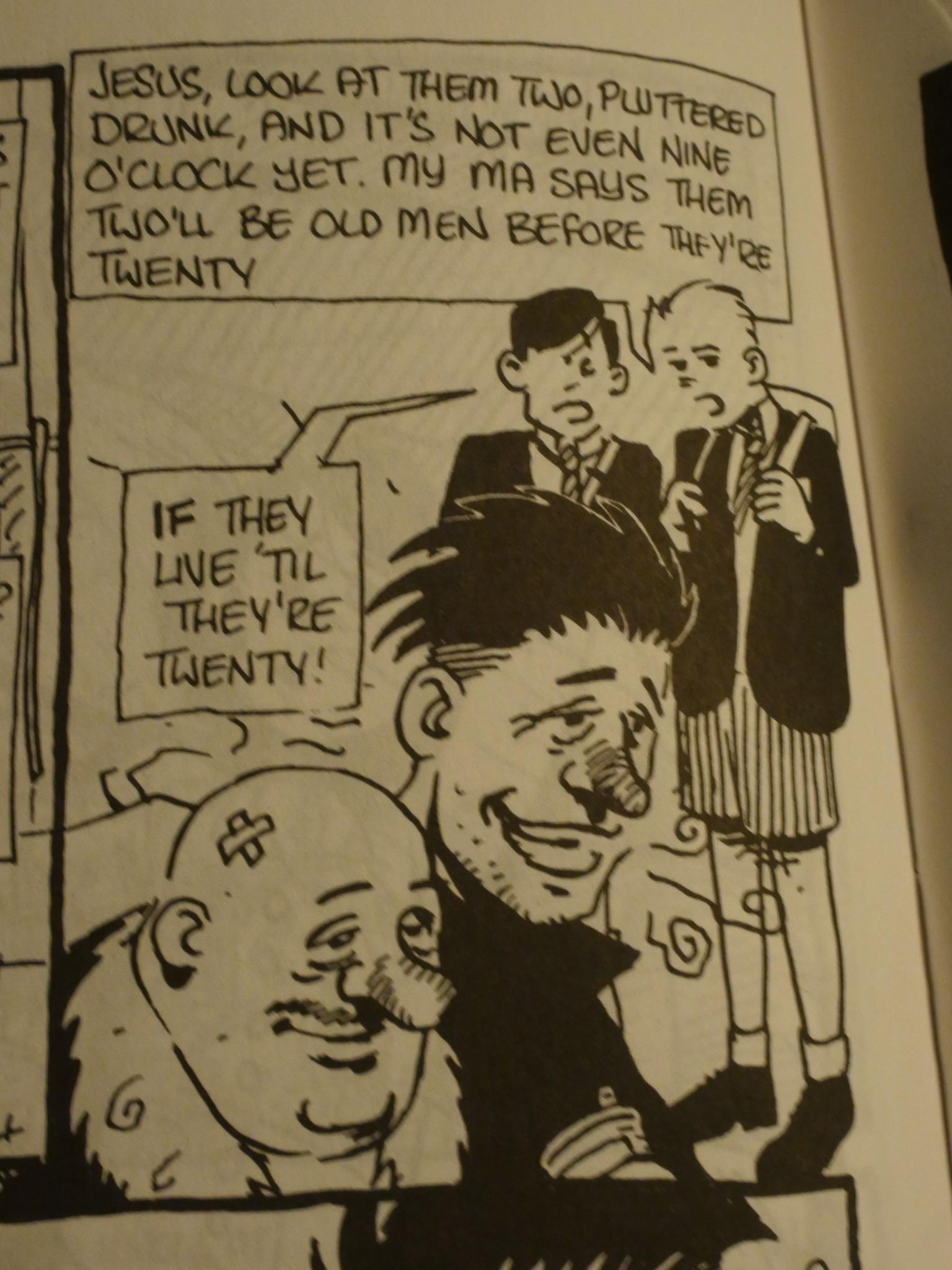 Our hapless drunken duo makes a reappearance… Much continuity… And here’s the final page. 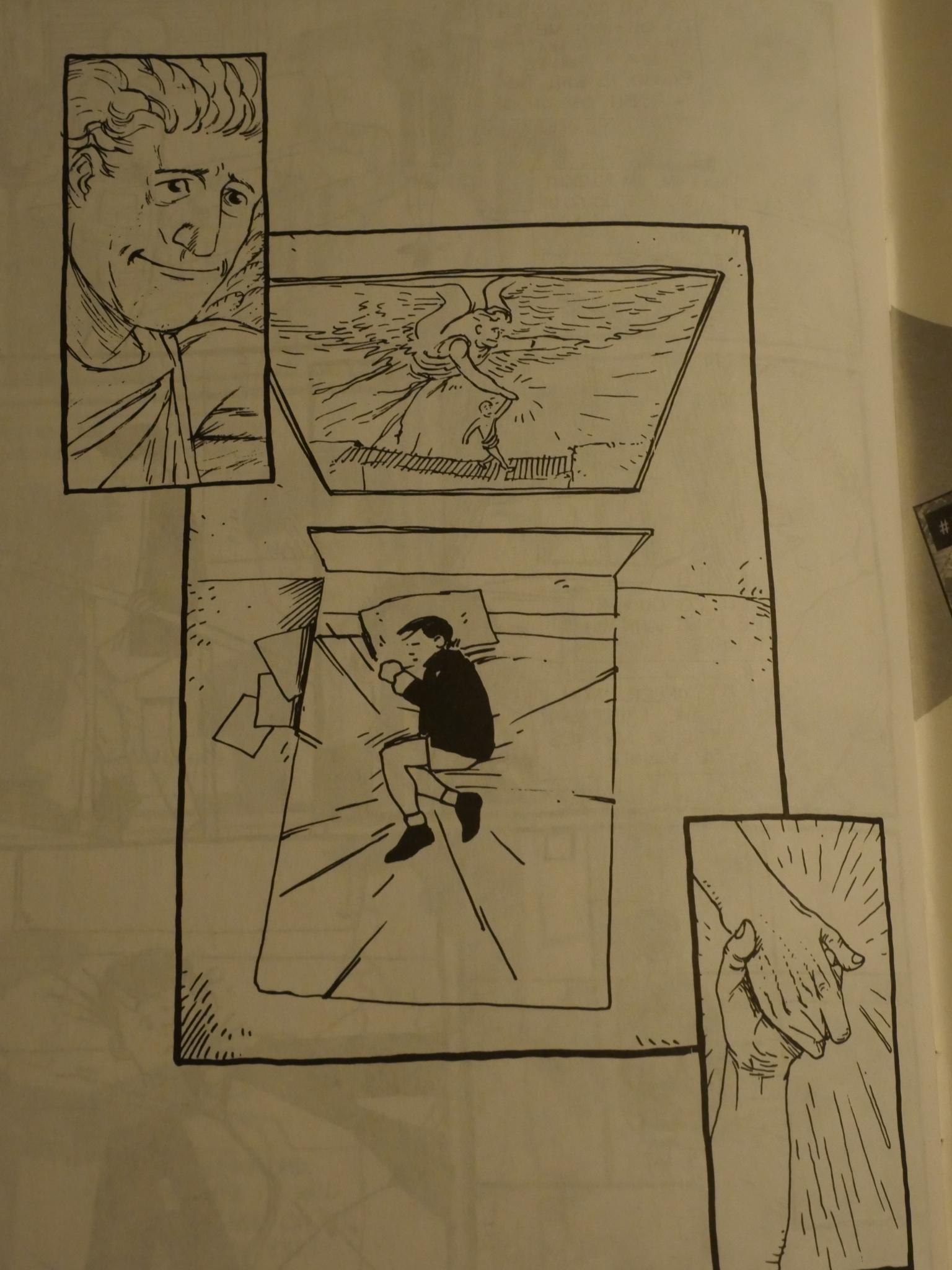