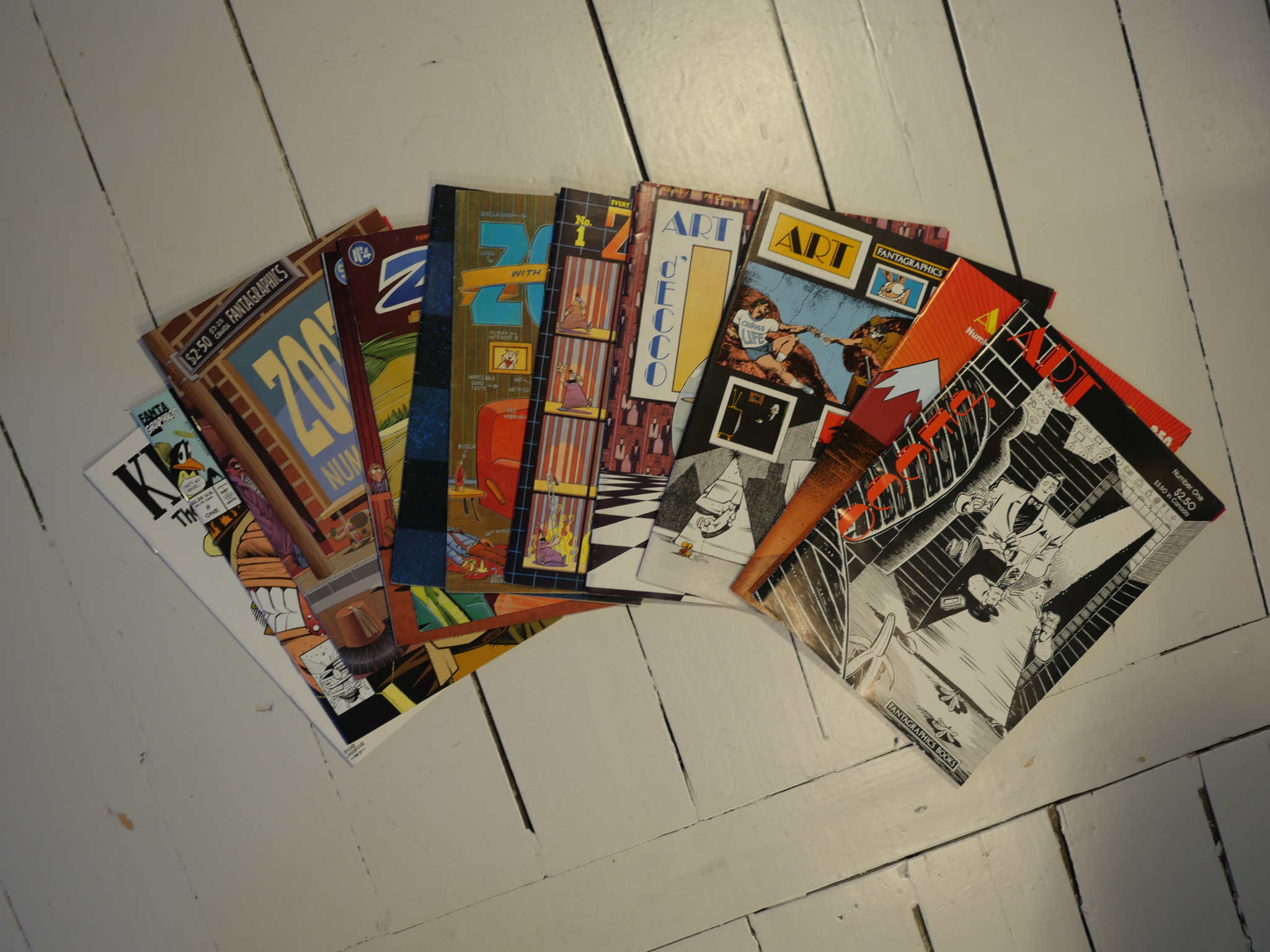 I had read the first issue of Art d’Ecco before, but that had apparently not inspired me to buy the rest of the issues at the time. How exciting! Is it going to suck? 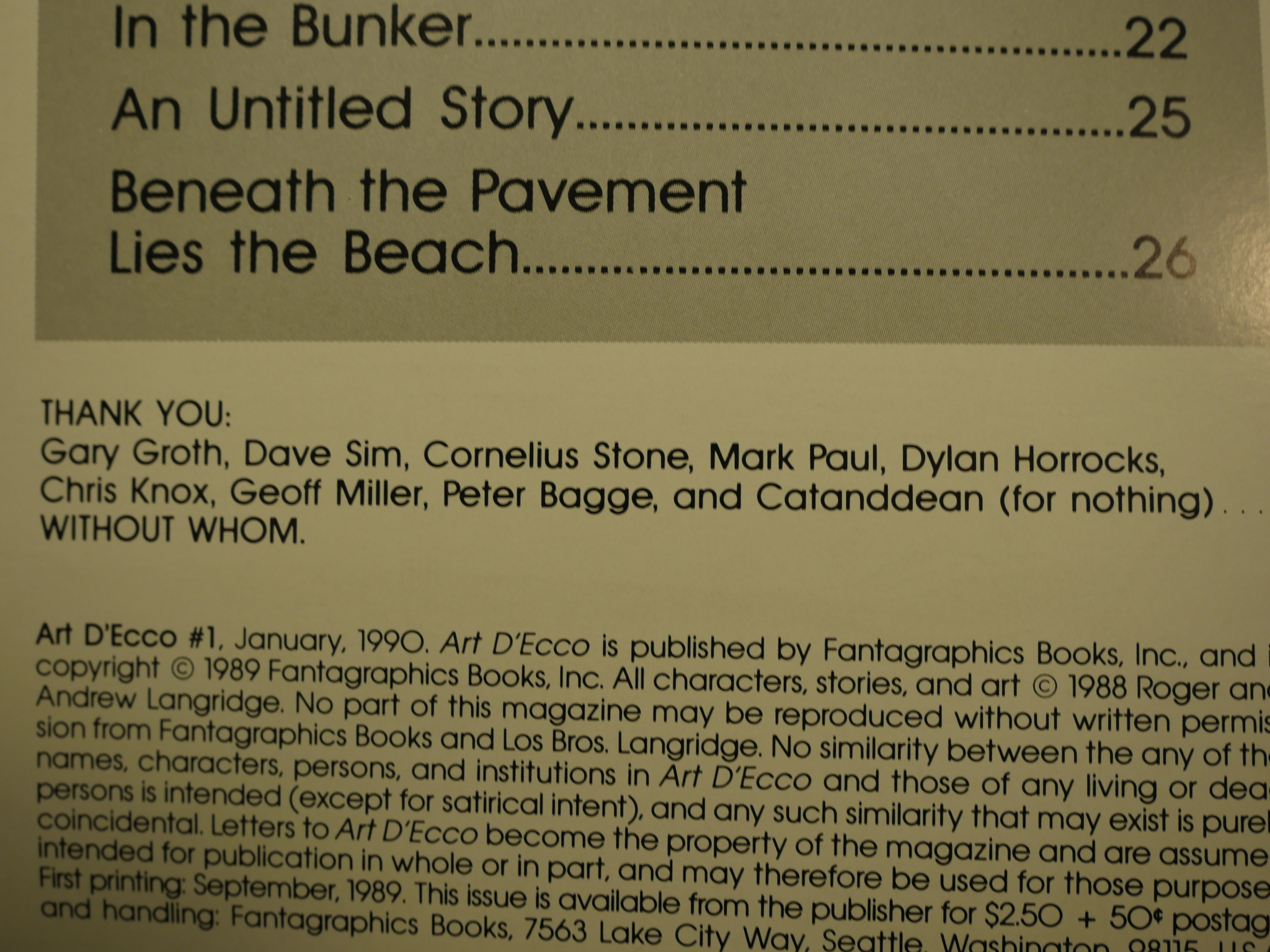 Hm… Catanddean? Is that Cat Yronwode and Deal Mullaney (of Eclipse comics) the brothers are thanking for nothing? How odd. 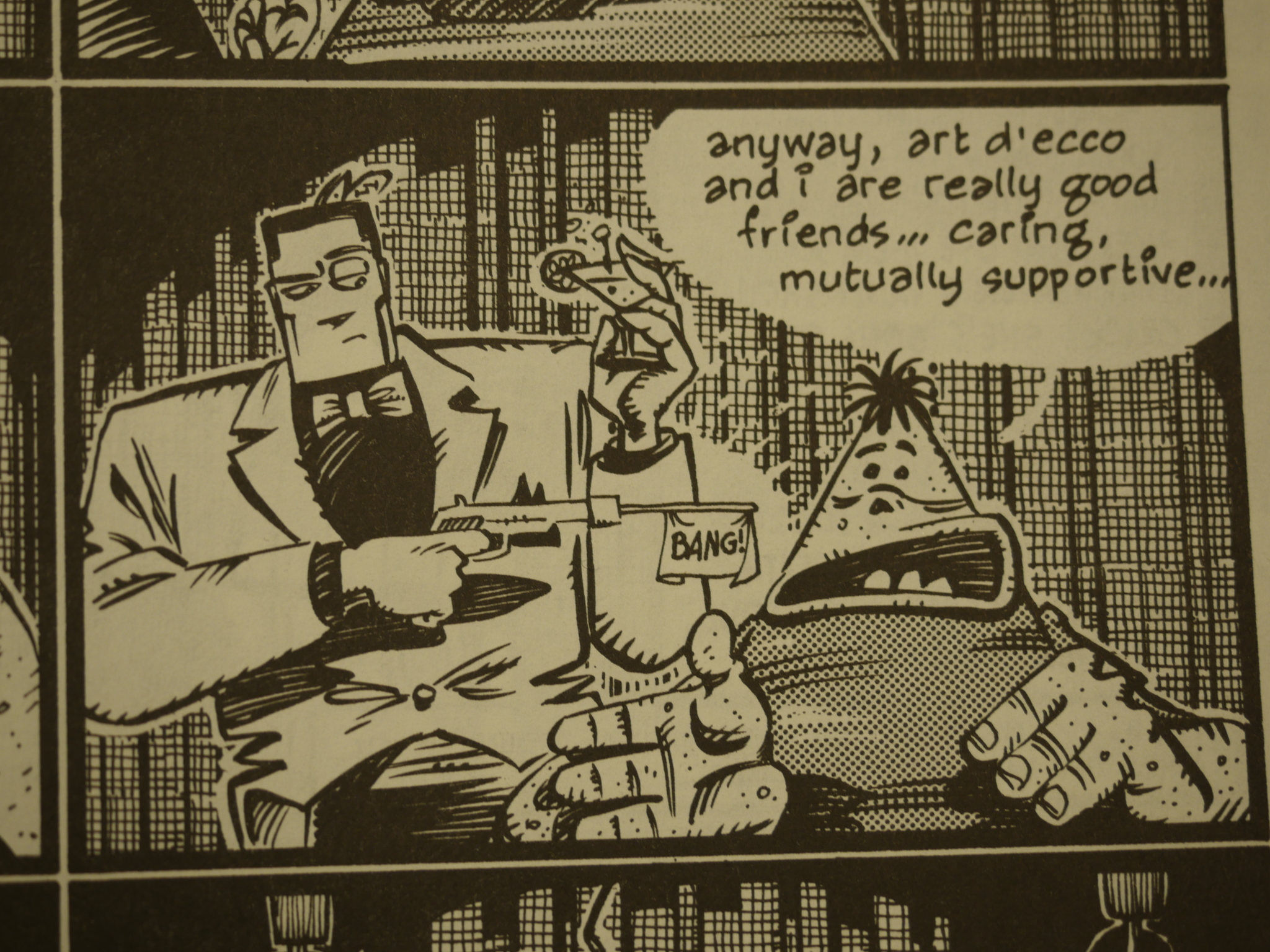 Anyway, it doesn’t suck! It’s very silly and very funny. Perhaps it was the artwork that made me lose interest? I mean, the artwork’s very appealing, but it does look a lot like Gotlib. 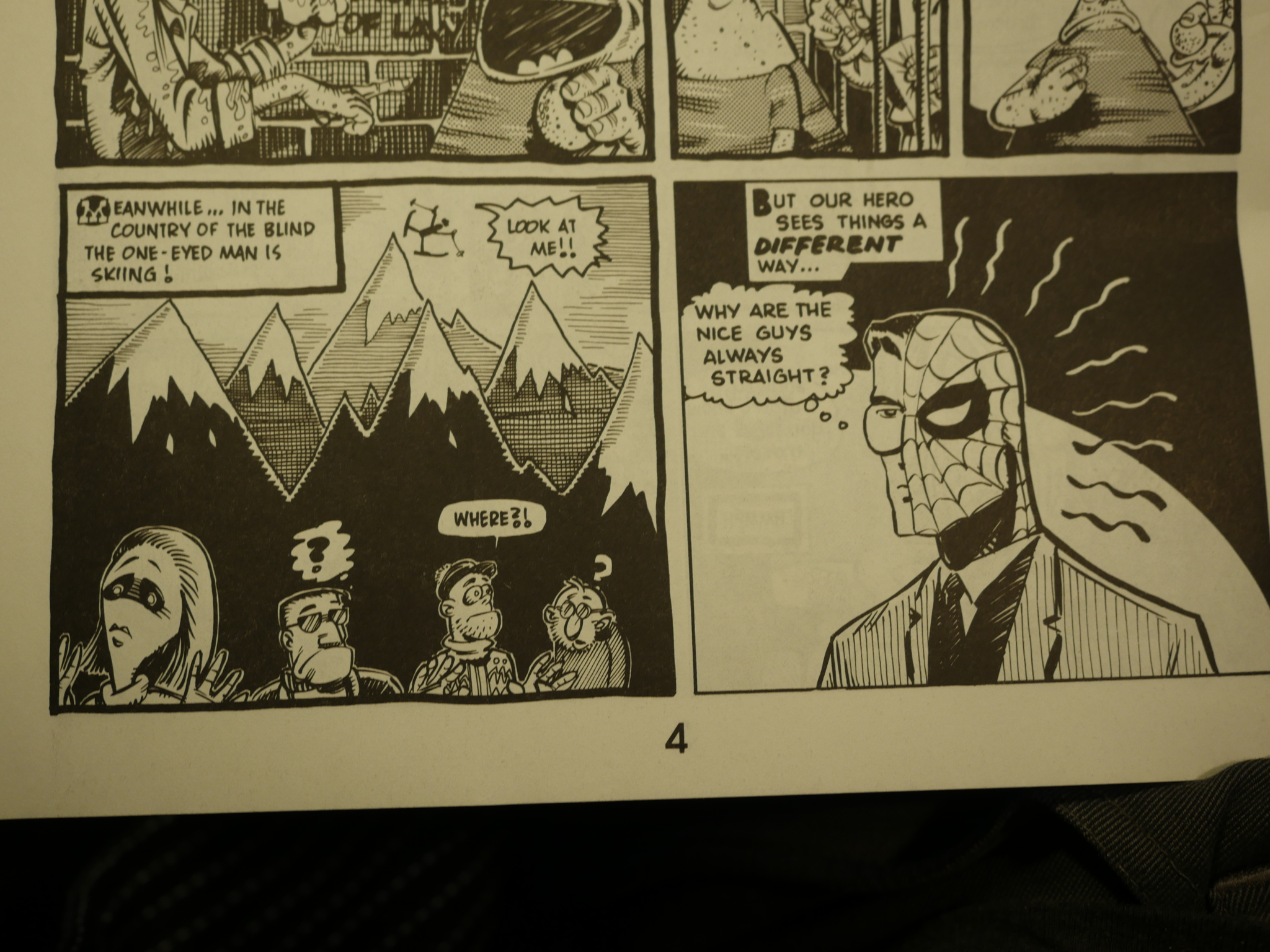 And the humour is also frequently Gotlibish, but also goes off on tangents like this, which are very un-European. 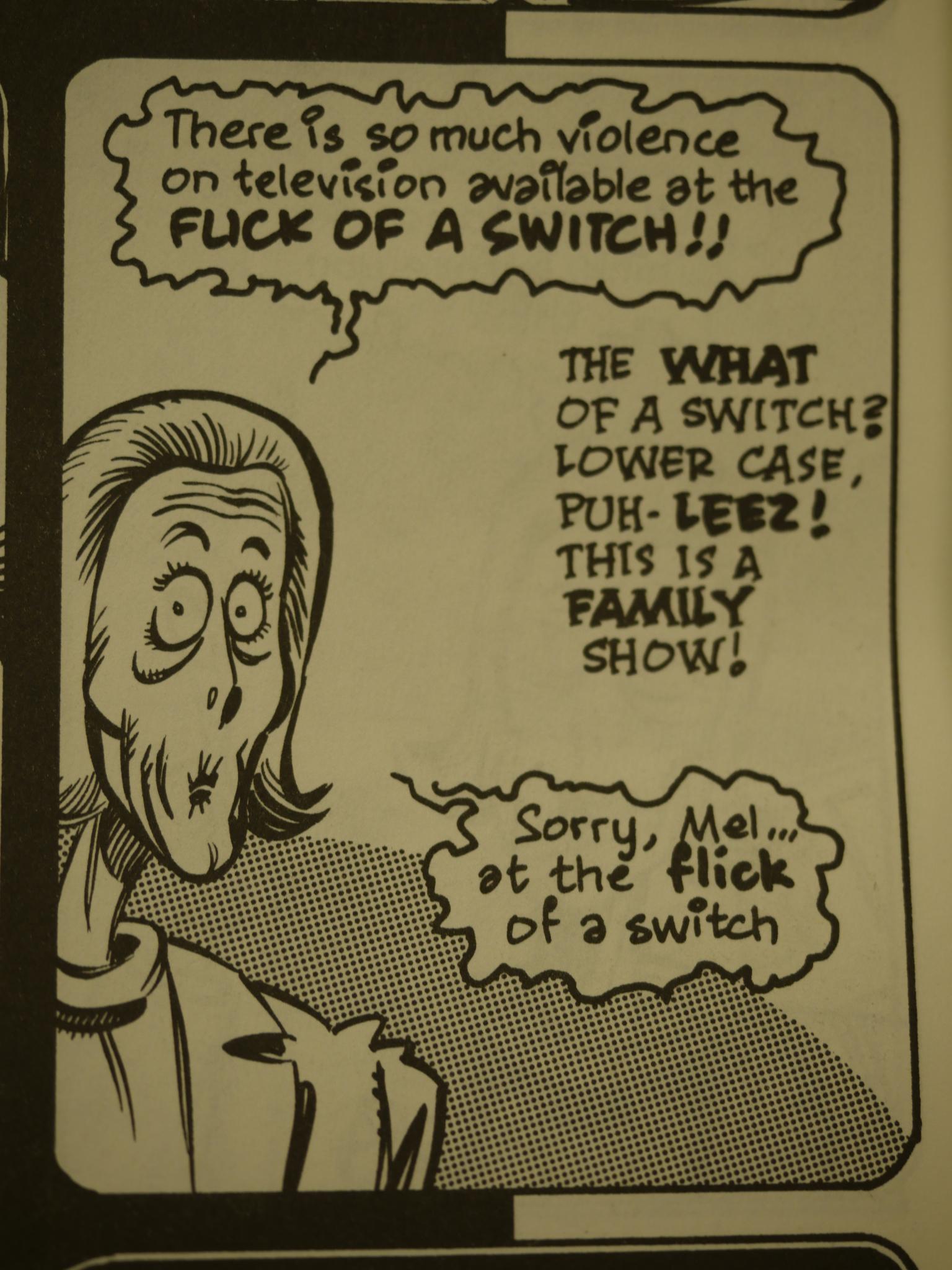 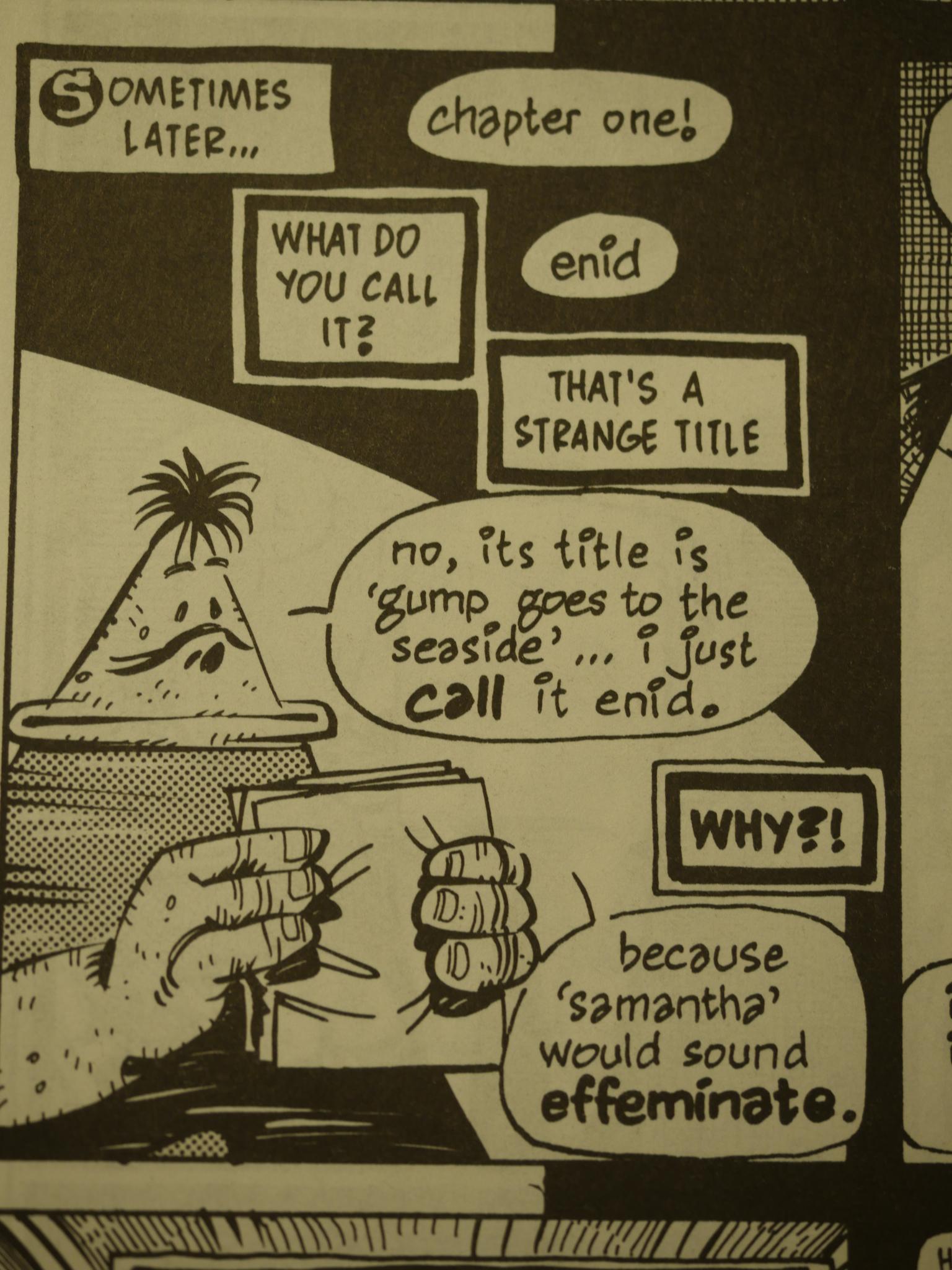 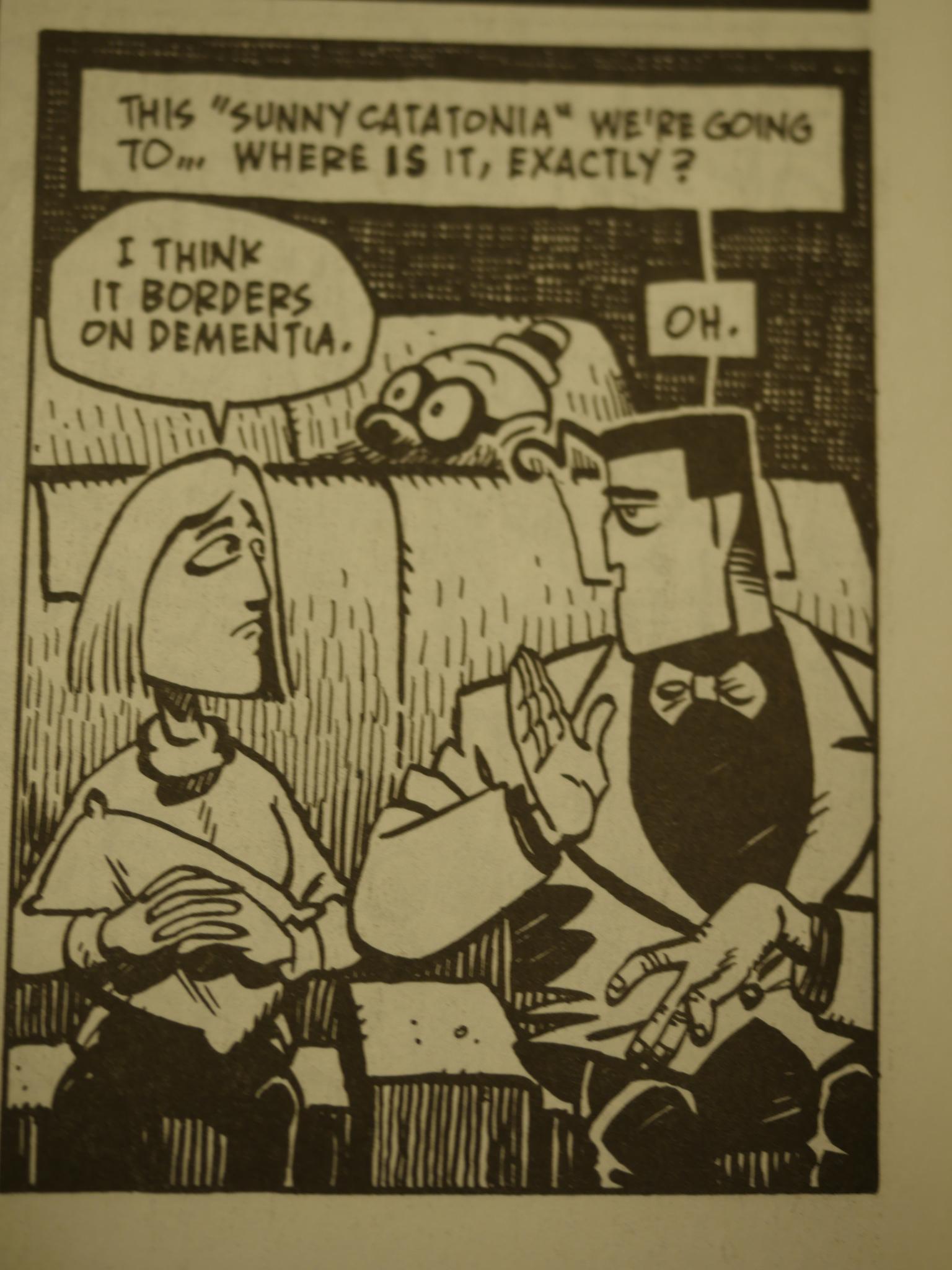 These jokes would work perfectly in many a zany comedy movie. 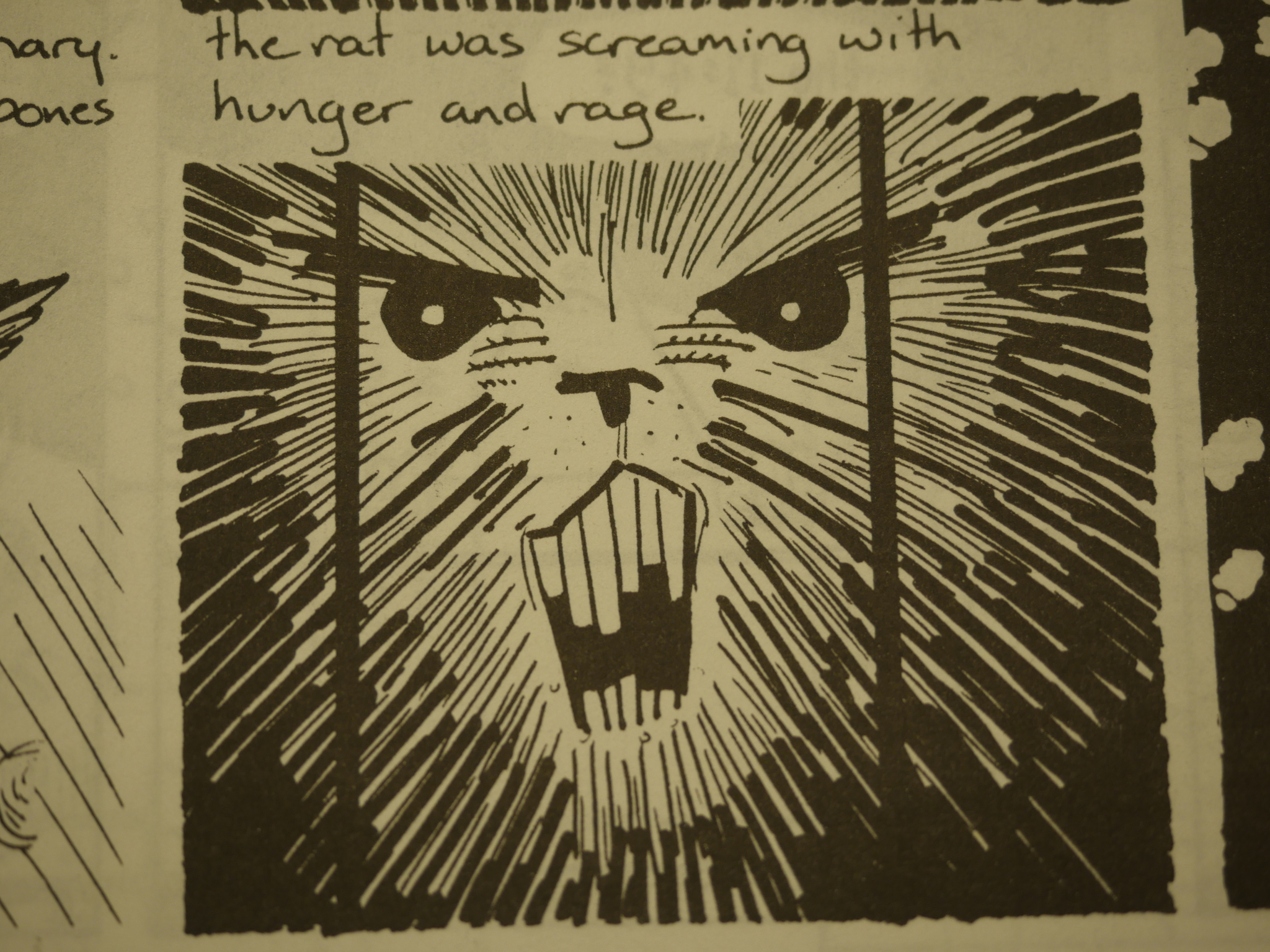 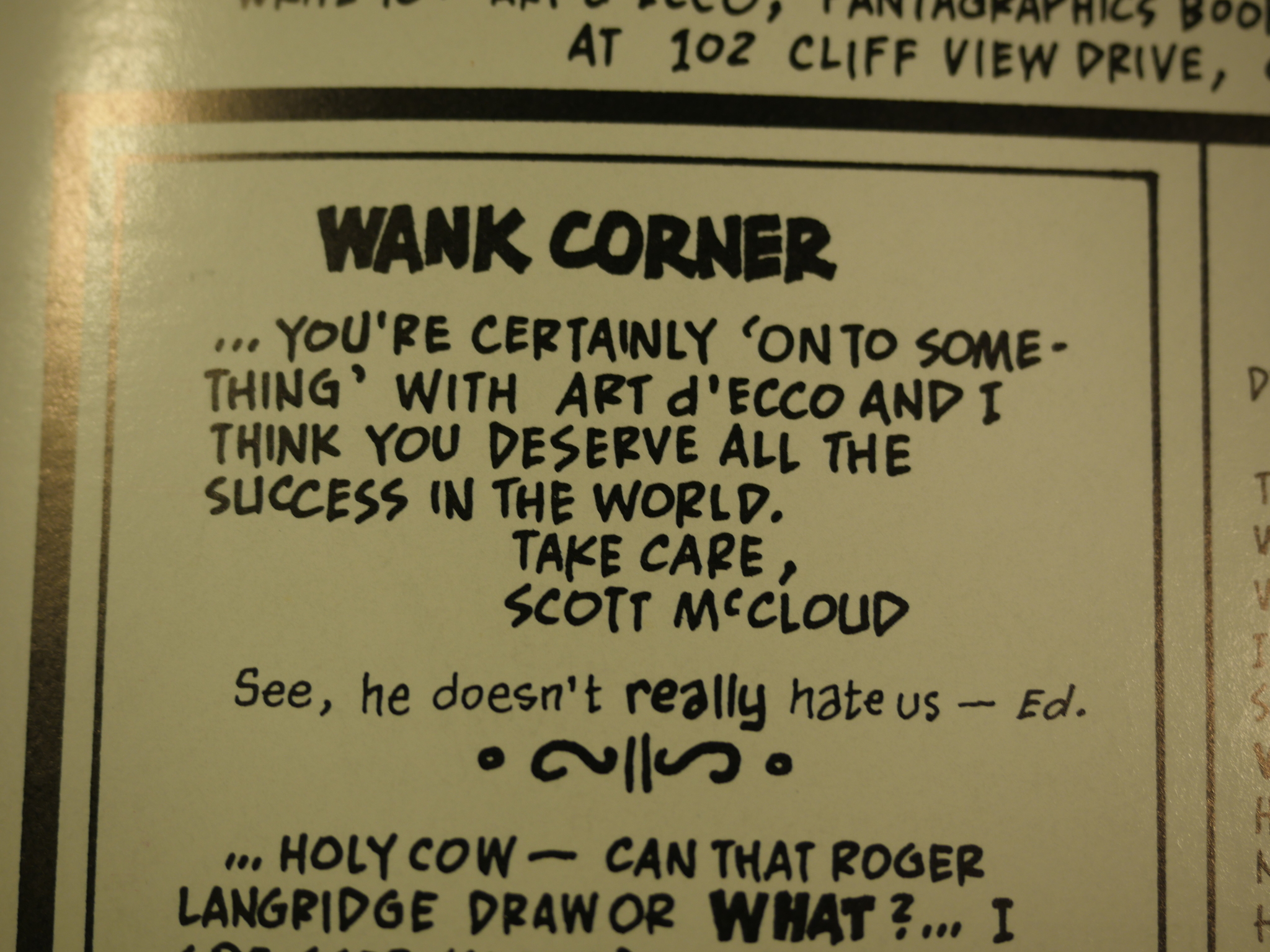 Hm… “he doesn’t really hate us”? That’s a weird thing to write…

Oh! Oh! I just had a thought! (Yes, it happens!) Scott McCloud had a character caller Art Dekko in his Zot! series! And that was published by Eclipse! Had perhaps Eclipse threatened to sue Fantagraphics over publishing a series that’s homophonic with an obscure character from a not very successful series?

I can’t find anything about that at all on the interweb, but the Langridges had previously published a series in their native New Zealand called Art Dekko! So they changed the name before bringing it to the US! Because of legal action from Eclipse? I’m just guessing here.

Oh! Oh! Oh! The next series that the Langridges published in the US was called “Zoot!” Like “Zot!” Even with the exclamation point!  It all ties together! 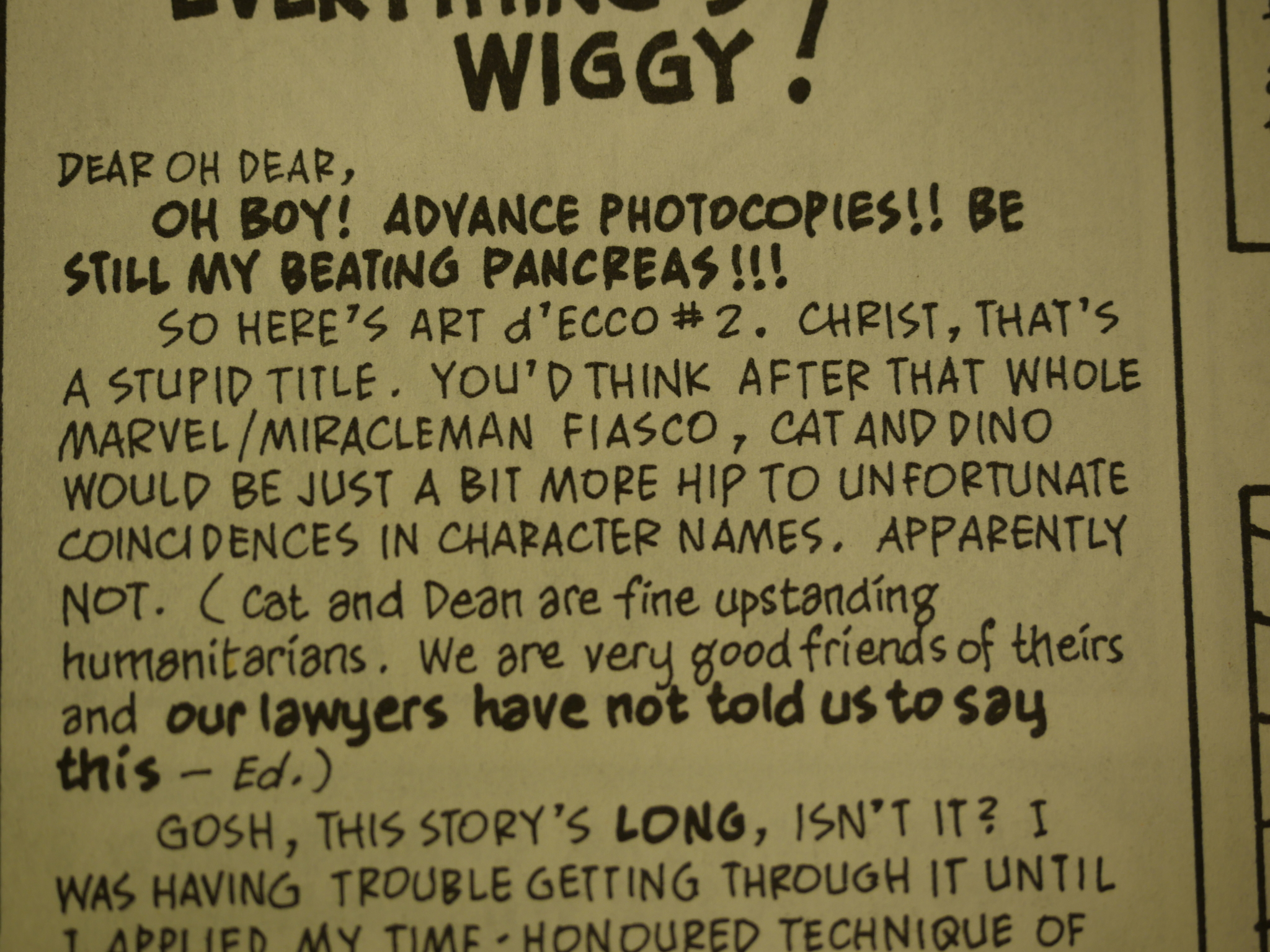 Here’s more evidence in a later issue! I think we’ve solved this sucker. 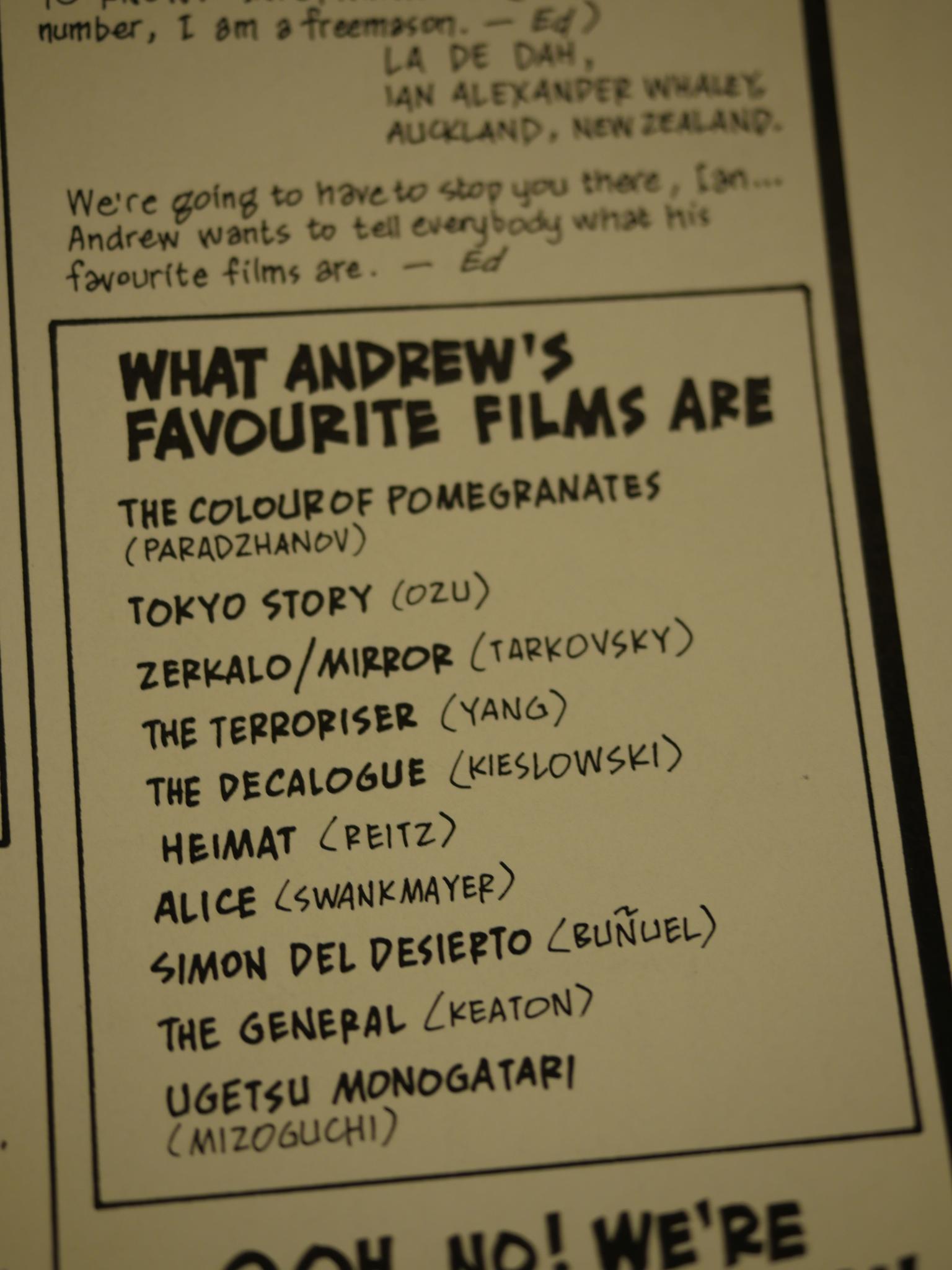 The humour in Art d’Ecco veers between very low-brow and very high-brow without taking the usual pit-stop in the middle, which is refreshing. So many American humour comics seem to despise high culture, taking it as a personal affront that things exist that they don’t like personally.

The joke references in Art d’Ecco are more reliably cultured: Not a single reference to Leave it to Beaver (or whatever) in sight. 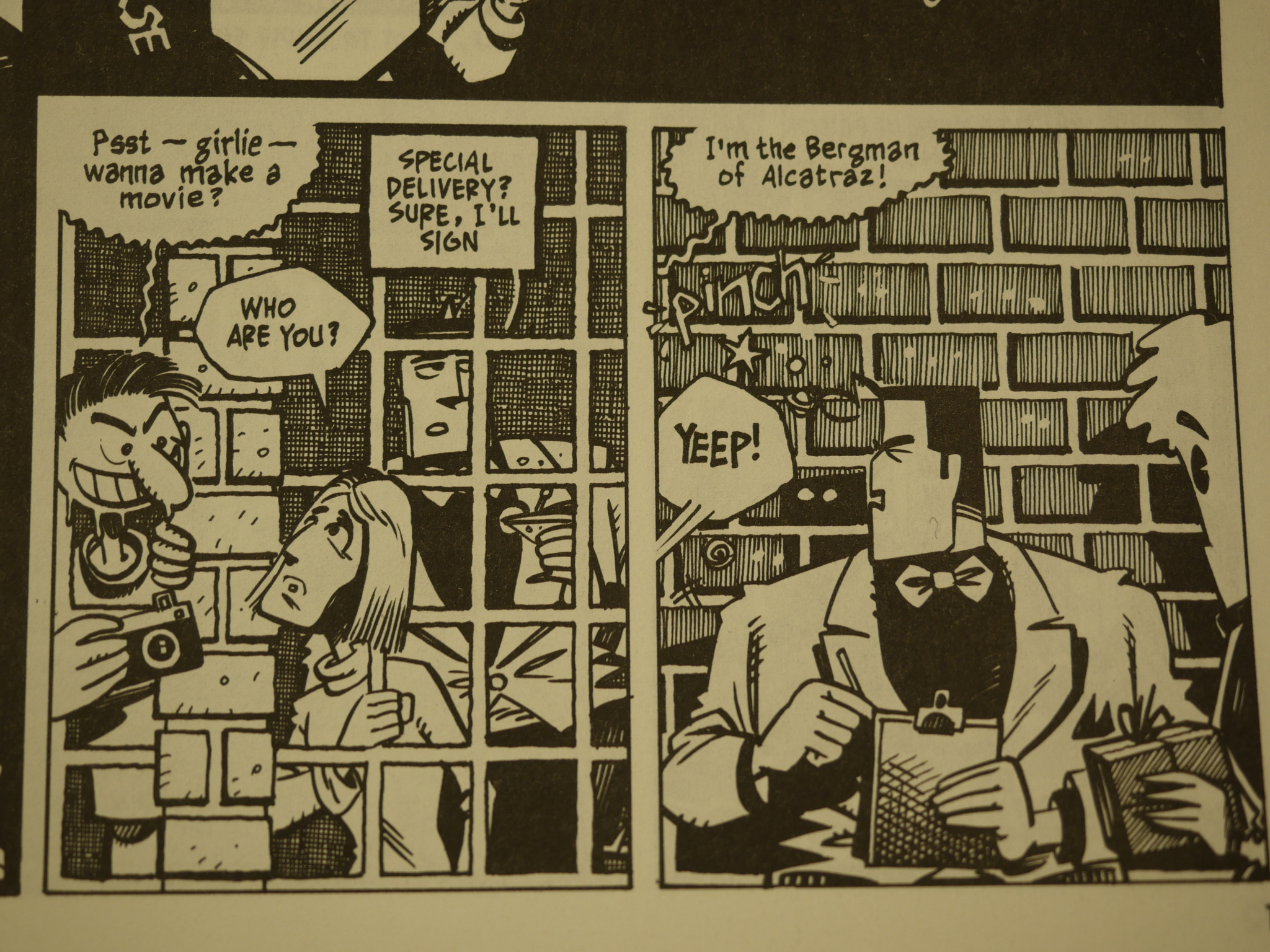 Lots of poop jokes, though, and general irresistible stupidity like this. (They’re in jail, see, and Gump sends them a cake with hidden… Oh, you get it.)

One surprising thing about Art d’Ecco (besides just how good it is) is that it’s mostly one coherent story. Well, at least the second and third issues: It’s all about rescuing (well, sort of) Gump from a cult. I had expected more randomness, but it’s mostly rather straightforward… But then, with issue four, it’s over, and Art d’Ecco changes from magazine format to standard US comic book format. And changes name to Zoot! (tee hee). And it’s not just the physical format that changes: It becomes that traditional grab bag “single author” anthology I expected. (Although there’s two authors here.)

So lots of smaller pieces, and several continuing stories. And while Art d’Ecco was 99% fun fun fun, we here get a mix between what might be autobio, wackiness and serious stories. The art changes to reflect the stories. (Or the other way around.) … and then this jarring retelling of the life of Elizabeth Short, “The Black Dahlia”… It’s a really strong piece, but, man, it’s a rather disconcerting juxtaposition. Cute! And yet another art style. Finally we get an explanation of various French phrases for missing appointments, oubliettes. Very educational.

And then Zoot! stops without any warning. The serials were not completed, unfortunately. Oh, well. That’s indie comics. Leather Underwear is a collection of short pieces, and most of them are about religion. Above we see the comedy stylings of God and Jesus. 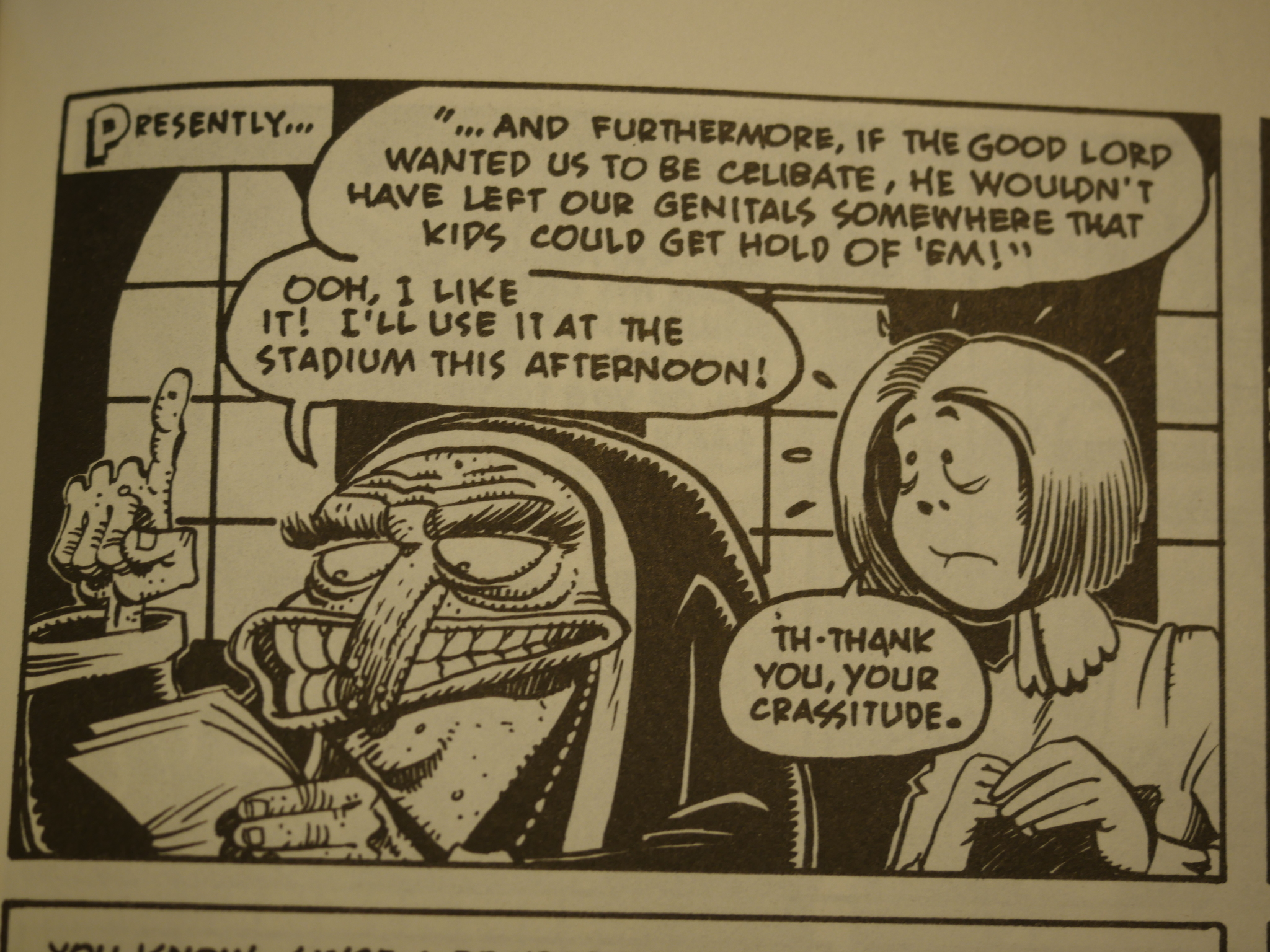 Knuckles the Malevolent Nun also shows up a couple of times.

As religious satire goes, Leather Underwear isn’t very angry, which is rather refreshing. Knuckles the Malevolent Nun is announced as a monthly comic book, and starts off with some letters about Leather Underwear (which had featured the aforementioned nun). Reactions differed. Official stamp of the Groth Authority. Hm… is that Moxie and Toxie? I thought they were Dylan Horrocks characters? He’s not mentioned anywhere that I can see, but them being all New Zealanders together… It seems like a worldwide rite of passage for indie comic book artists to draw at least one Krazy Kat homage page. The artwork for Knuckles is as good as any, but I found the writing not particularly intriguing. Sure, writing a book where the devil stabs Jesus is fun and all, but I’m just not all that interested. Religion is boring.

After these books, Roger Langridge has gone on to do a number of solo series to great success, among them Fred the Clown and a couple of years on the Muppets comic book that revitalised that franchise. Andrew Langridge doesn’t seem to have made any further comics (except for a couple in Art d’Ecco reprint compilations). The same seems to be the case with Cornelius Stone and Knuckles.

One thought on “FF1990: Art/Leather/Knuckle/Zoot!”