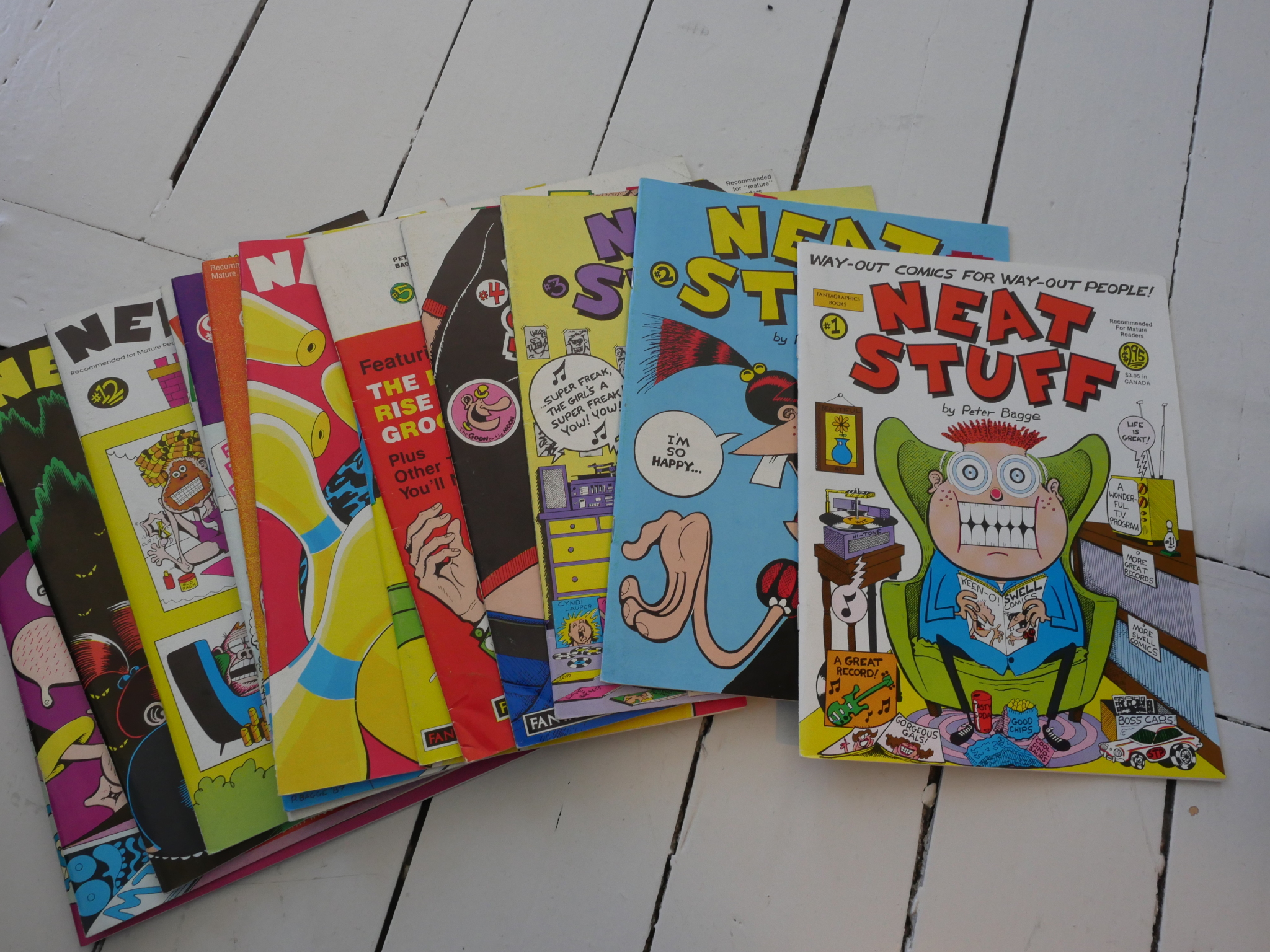 I don’t quite recall how I felt about Peter Bagge’s comics when I was a teenager. I certainly wasn’t obsessing about it like I was with, say, Chester Brown or Moebius. That the first issue of Neat Stuff that I have is a third printing from the mid-90s is a sign: I wasn’t sufficiently into Neat Stuff that I bothered to seek out and buy the first issue at the time, but picked it up a decade later.

Which makes my delight in reading these issues now something of a surprise. 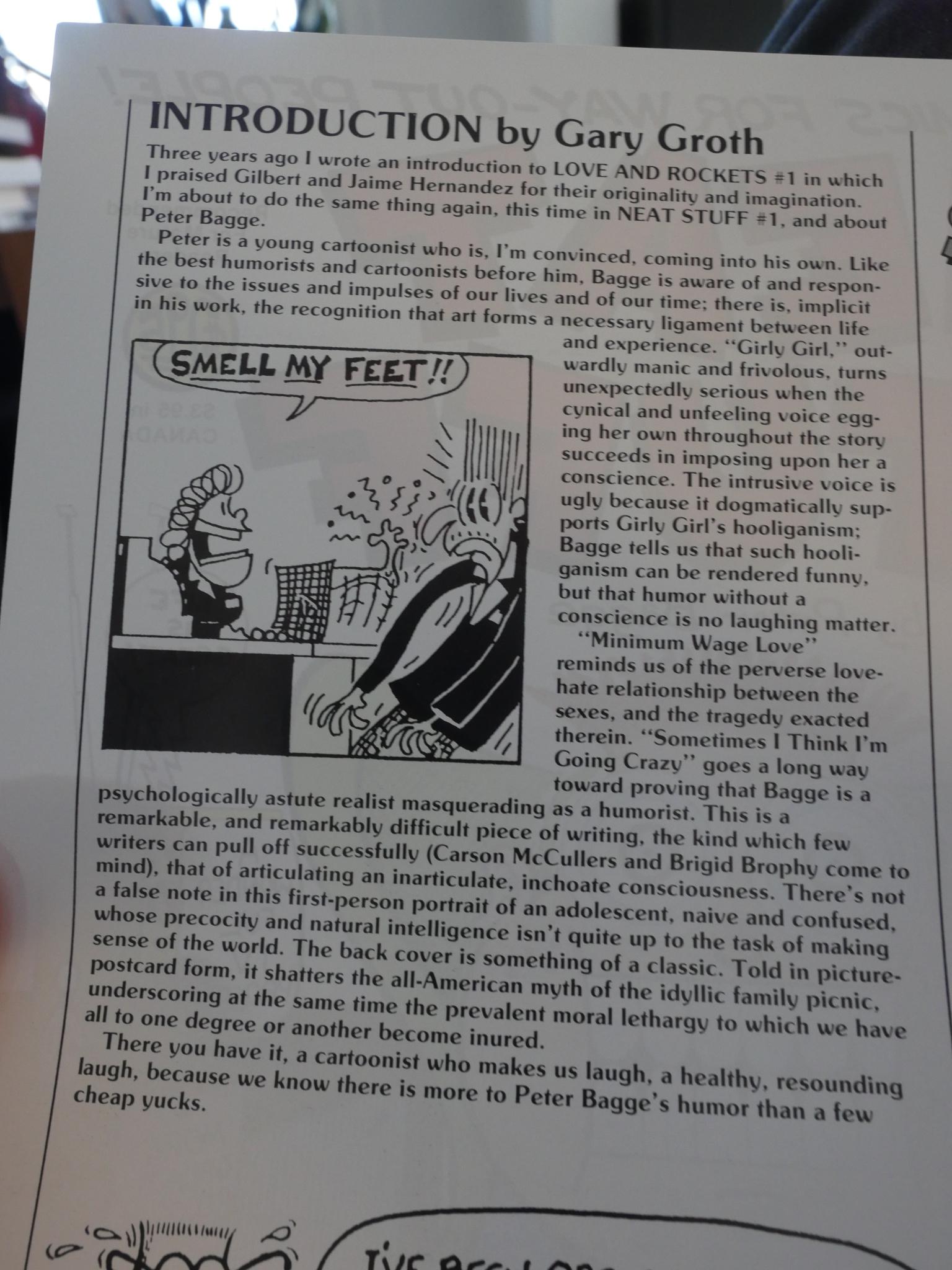 The first issue opens with a glowing editorial by Gary Groth, as was the tradition back then. But I think he’s under selling the work: It’s totally insane. 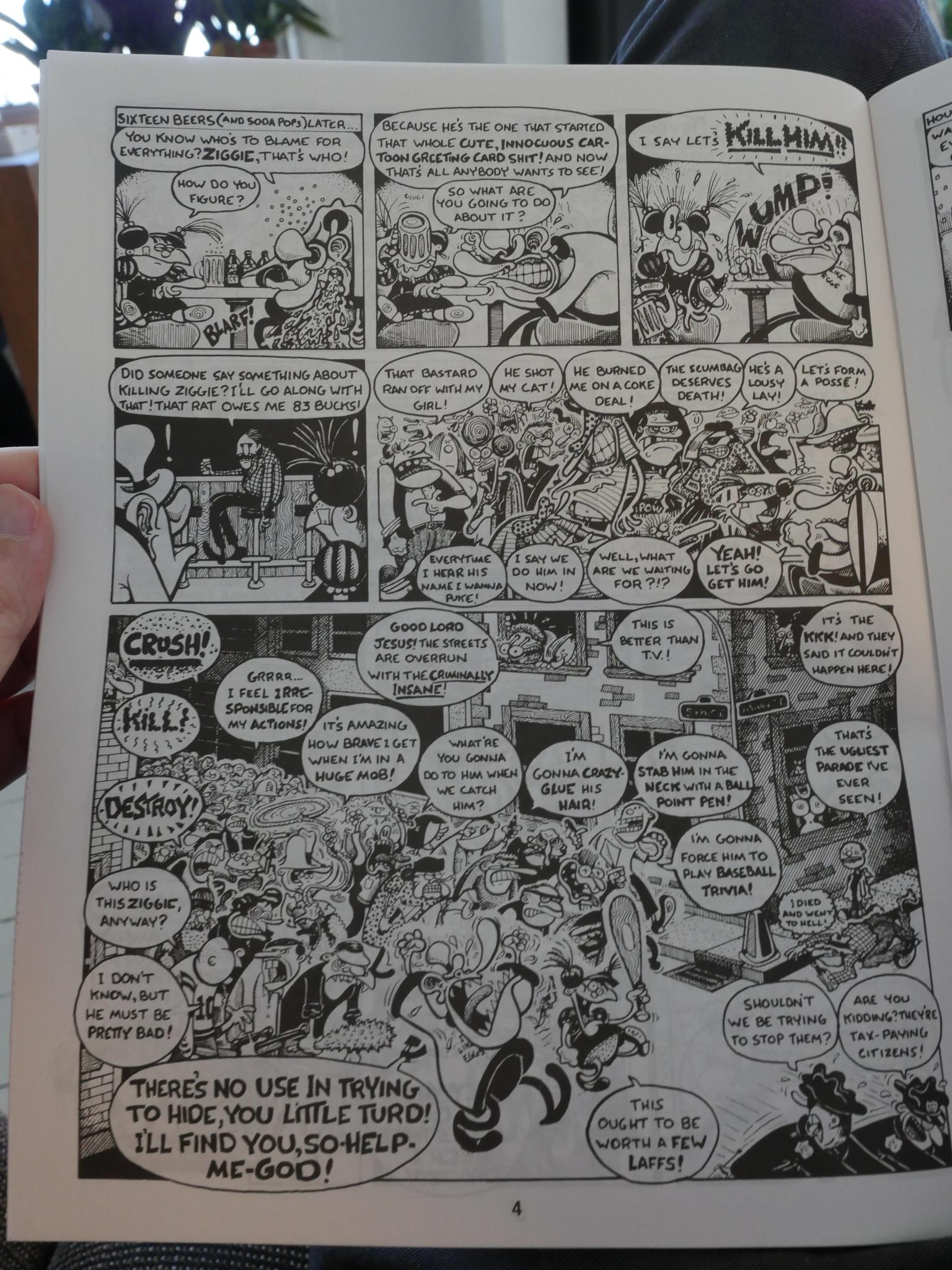 Just look at this Girly-Girl page of mayhem. 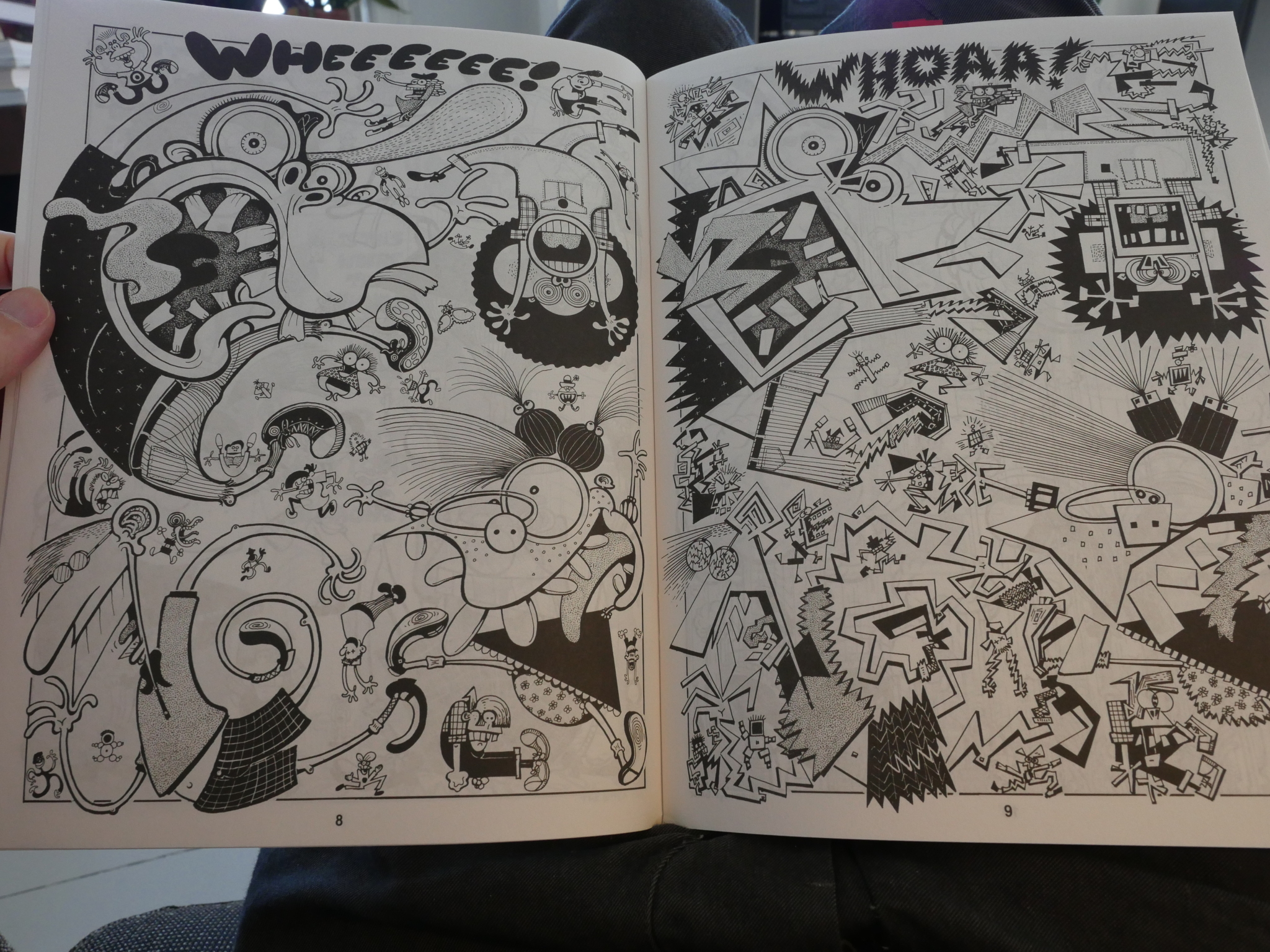 Or this way out wacky double page spread. 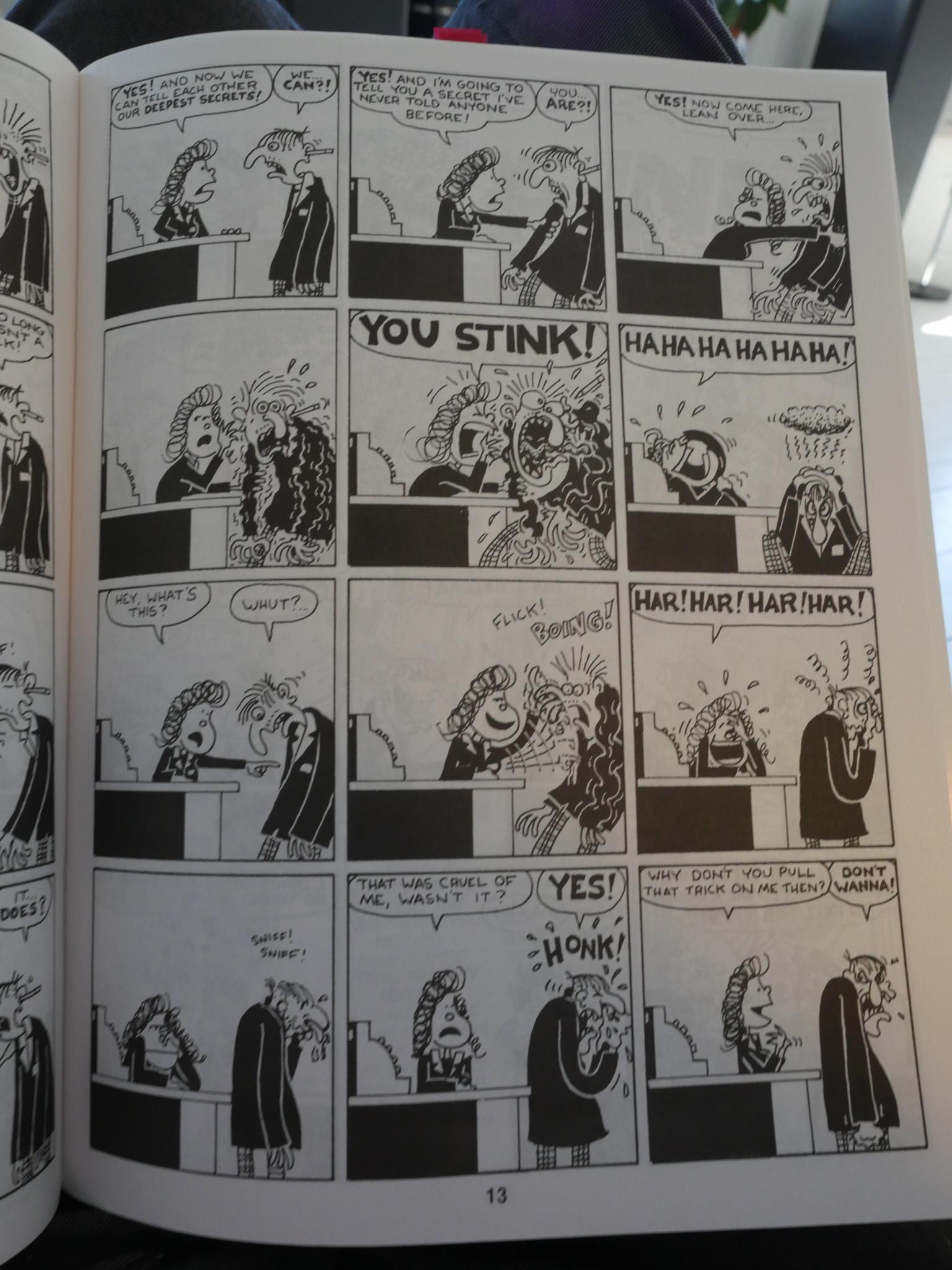 Such advanced humour! And then suddenly: 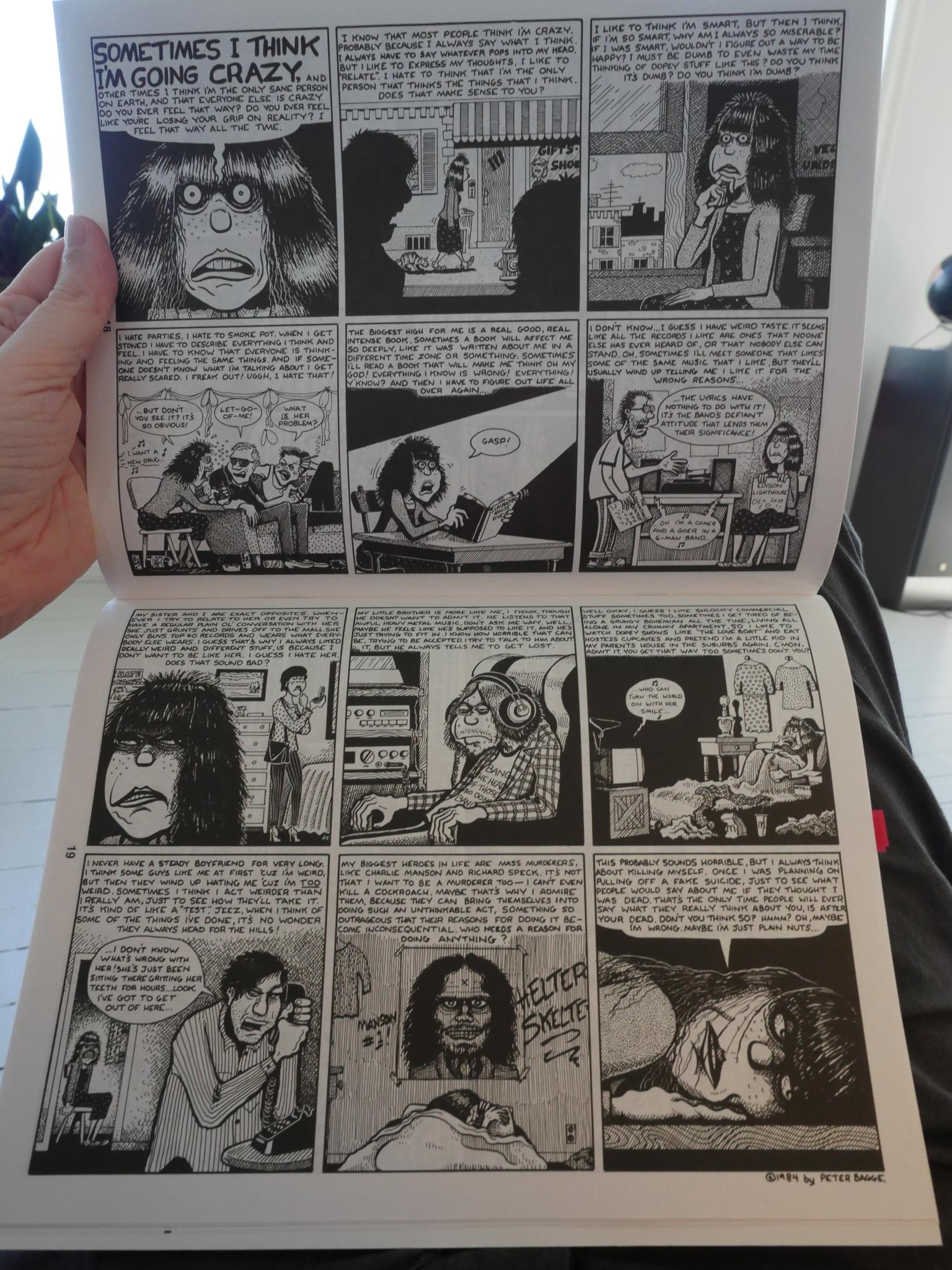 Seriousness! The first few issues of Neat Stuff is pretty well described by the title: It’s a grab bag of randomness, and it’s awesome. Like this nice glossary (that was later turned into a poster): 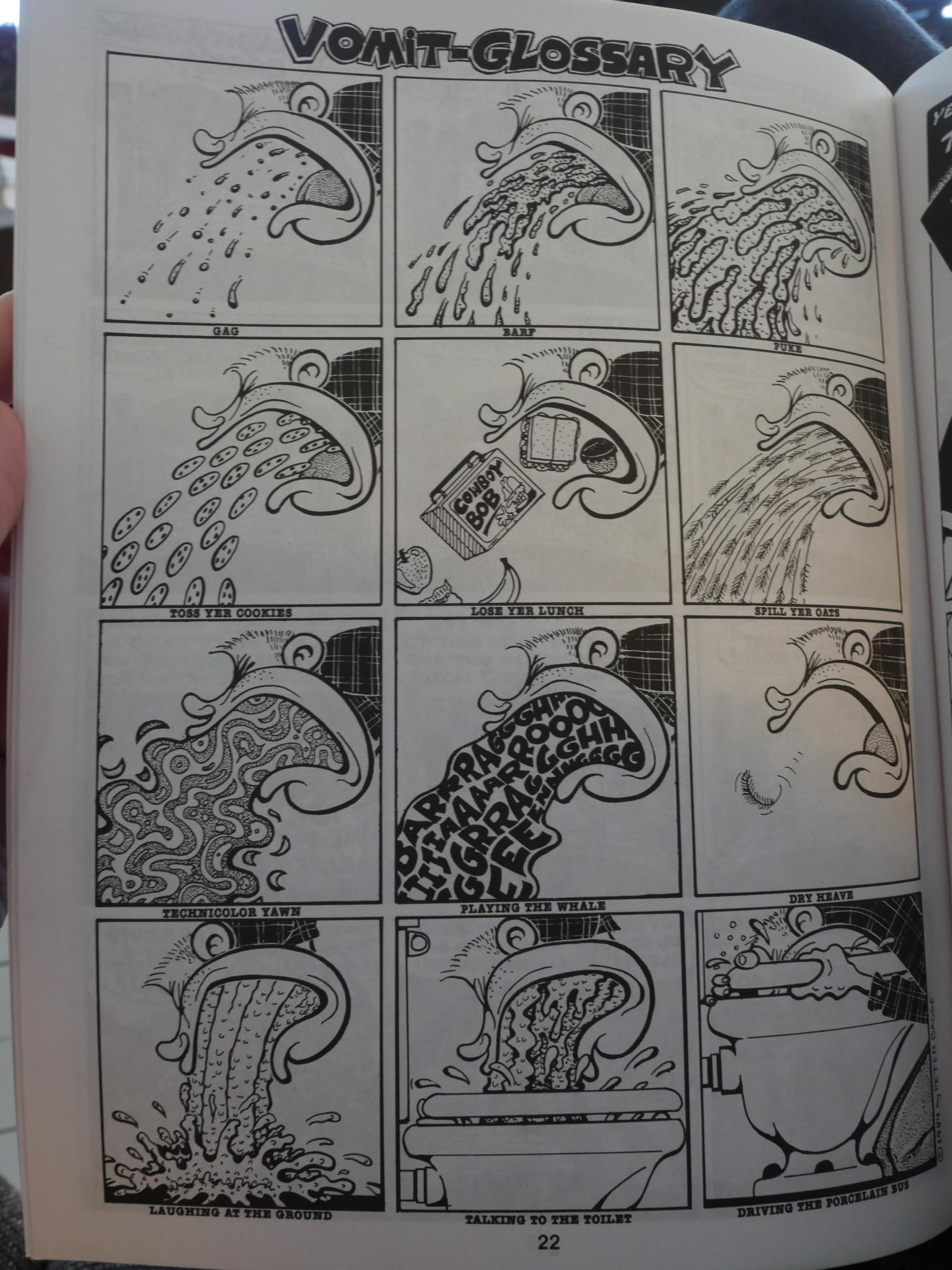 Bagge’s most enduring creation, the Bradley family, shows up in the first issue already. It’s the most sit-com-ish of all the series, and, I think, the weakest strip in this issue. 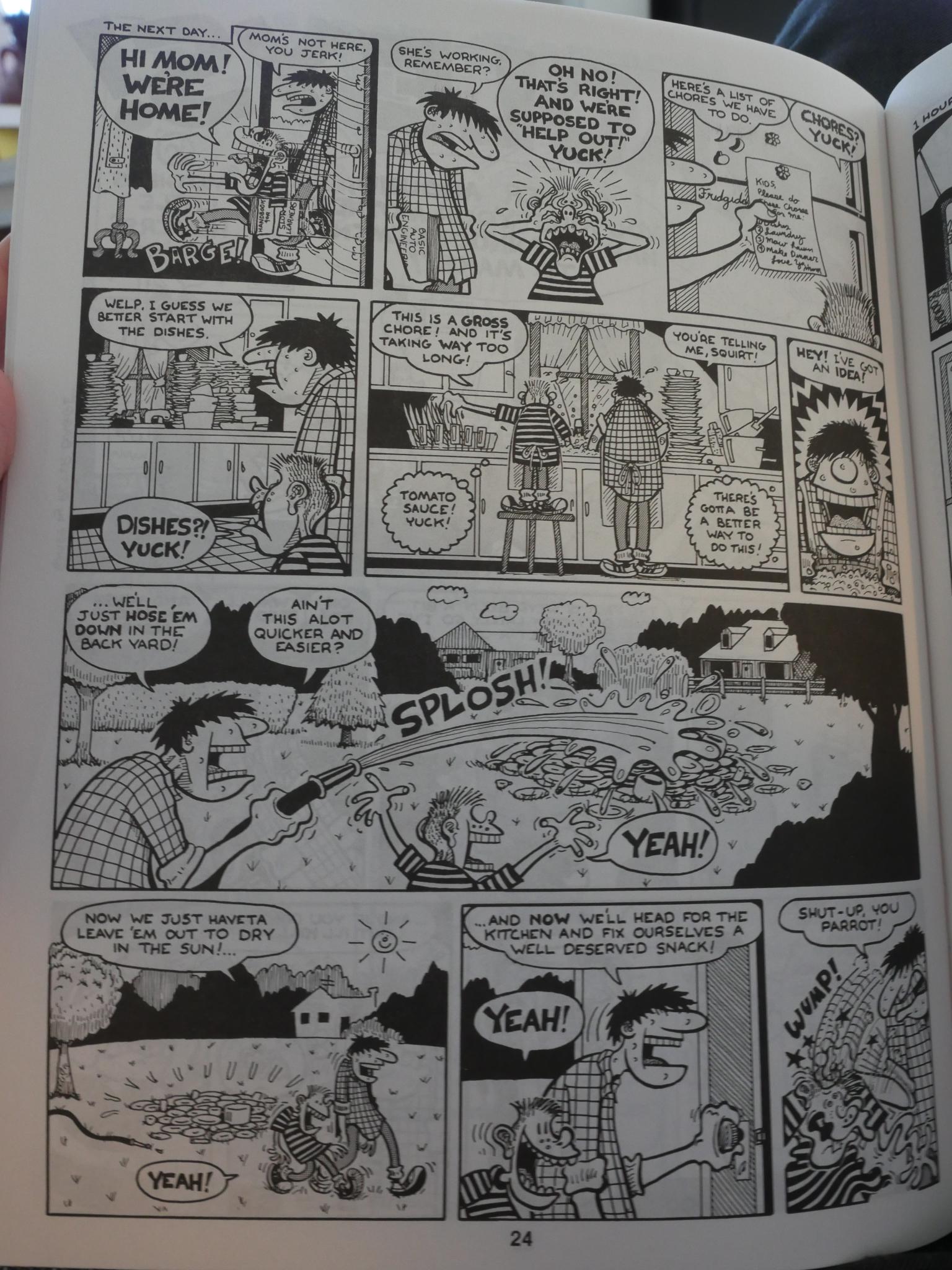 I mean, doing the dishes with a hose is a pretty old gag, and the only real twist Bagge does on the sit-com format is having (almost) all the characters being horrible, violent brats.

But I’m obviously in the minority here. Buddy Bradley would become the star of Bagge’s 90s series Hate, and went on to become a slacker/grunge fixture and made Bagge a super duper star. 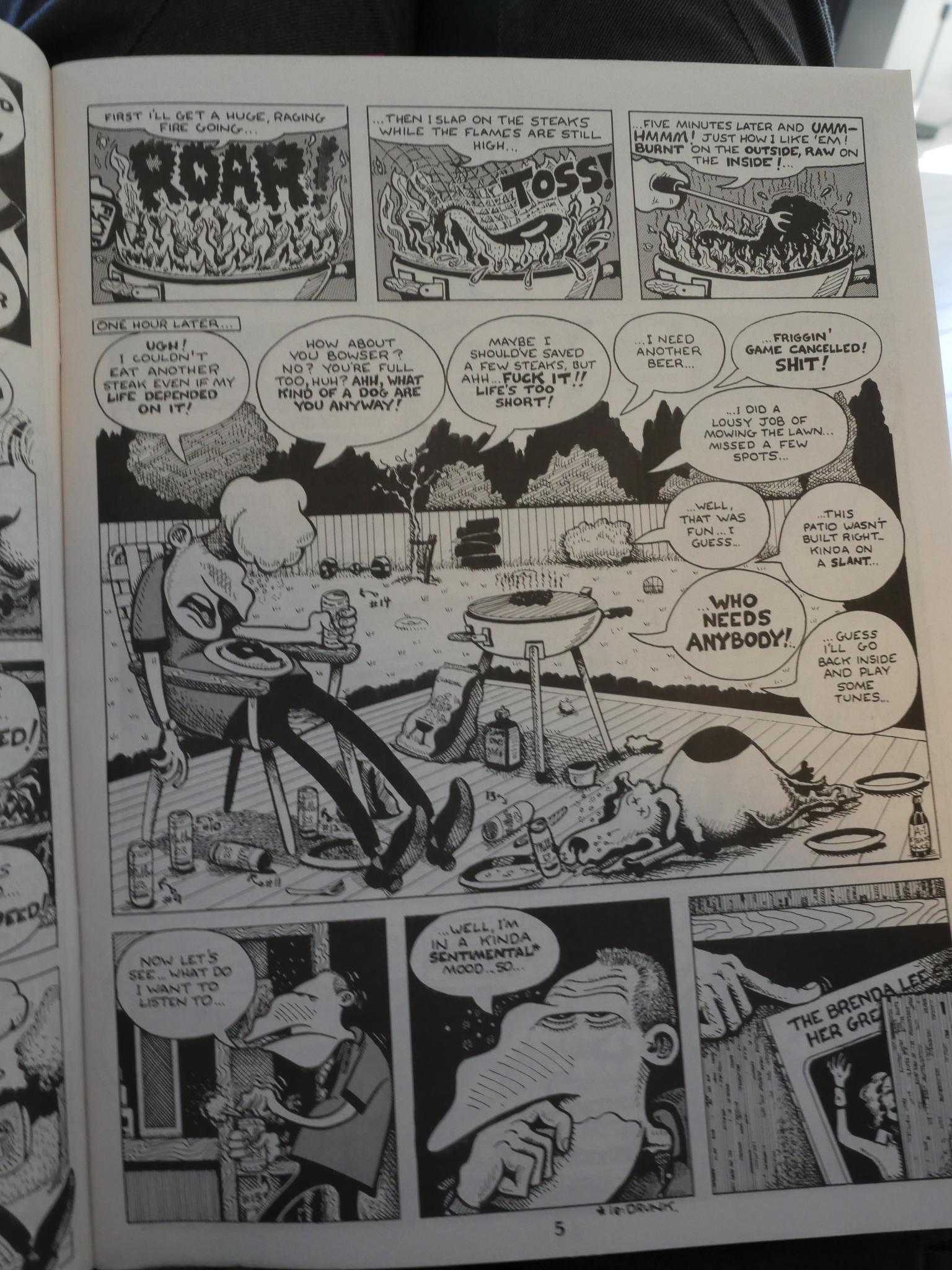 The second issue, otherwise fantastic, introduces Studs Kirby, a right wing radio talk show host. I’m not sure exactly where Bagge wanted his storyline to go. It’s, by far, the most realistic of the recurring characters, and it just isn’t very funny or interesting. 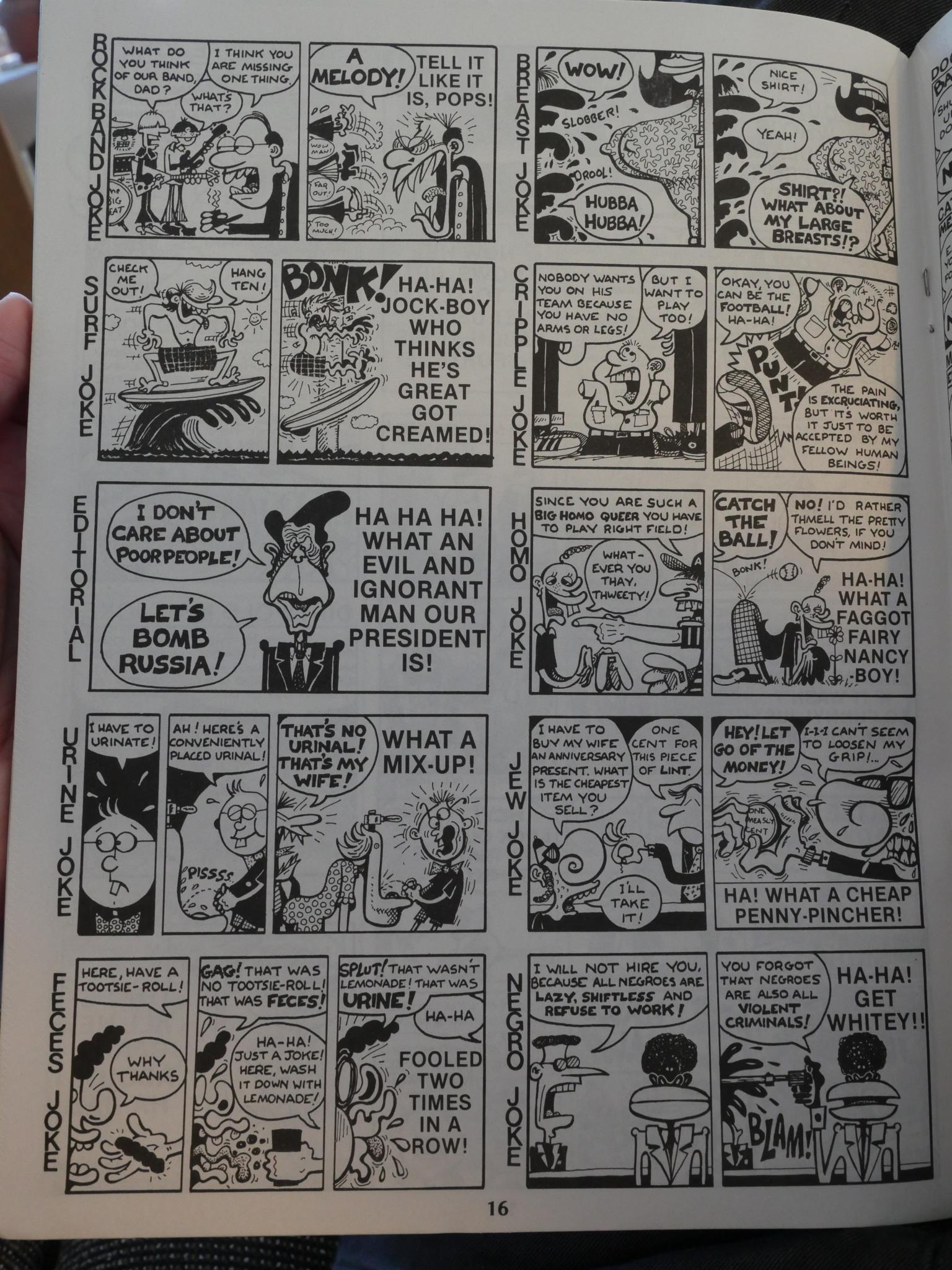 Bagge sure knows his humour cliches, which is a good thing, because he mostly avoids them otherwise. 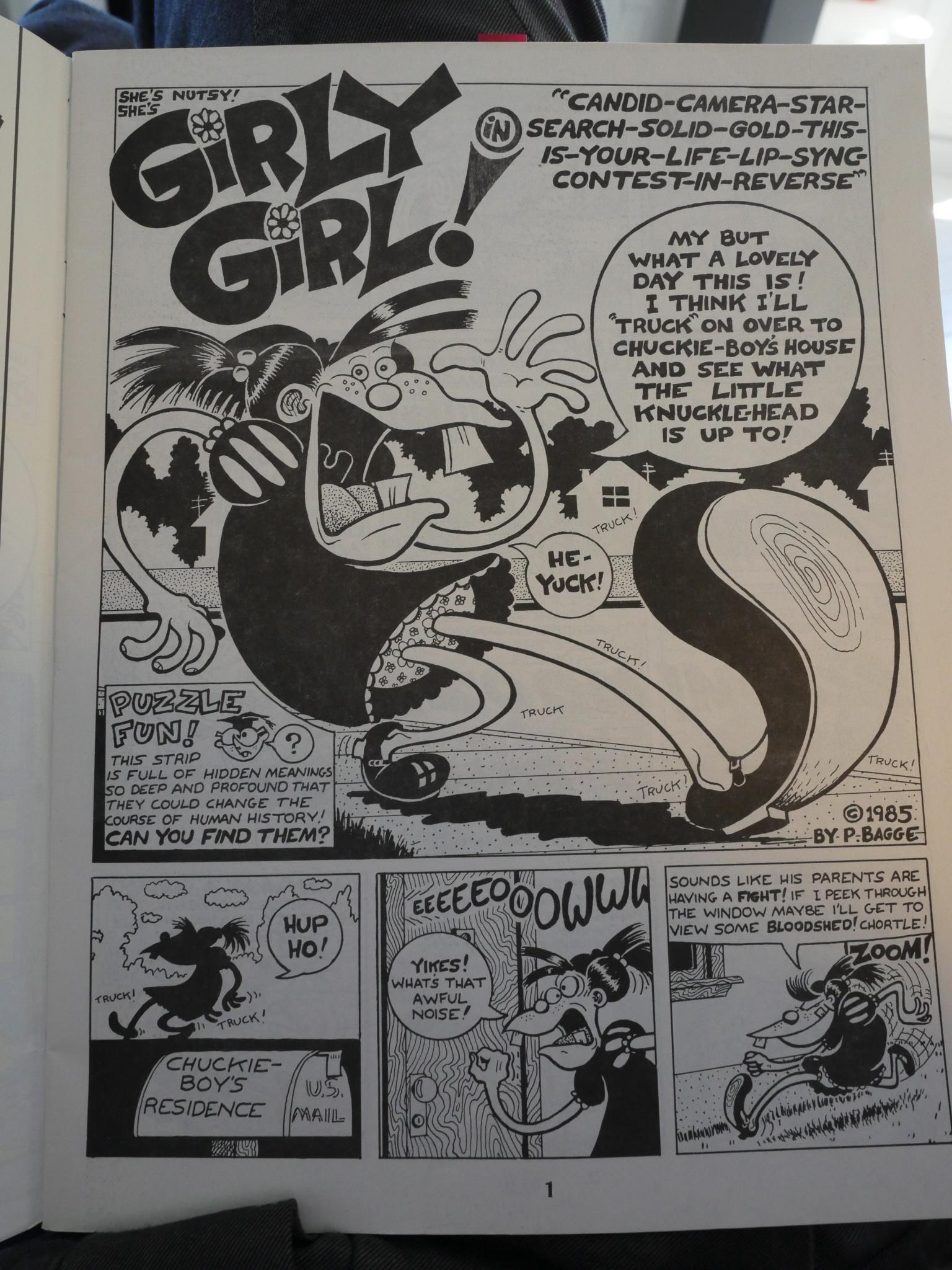 Bagge was the editor of Weirdo for a few years, taking over after Robert Crumb. And here’s Bagge paying homage, I guess. 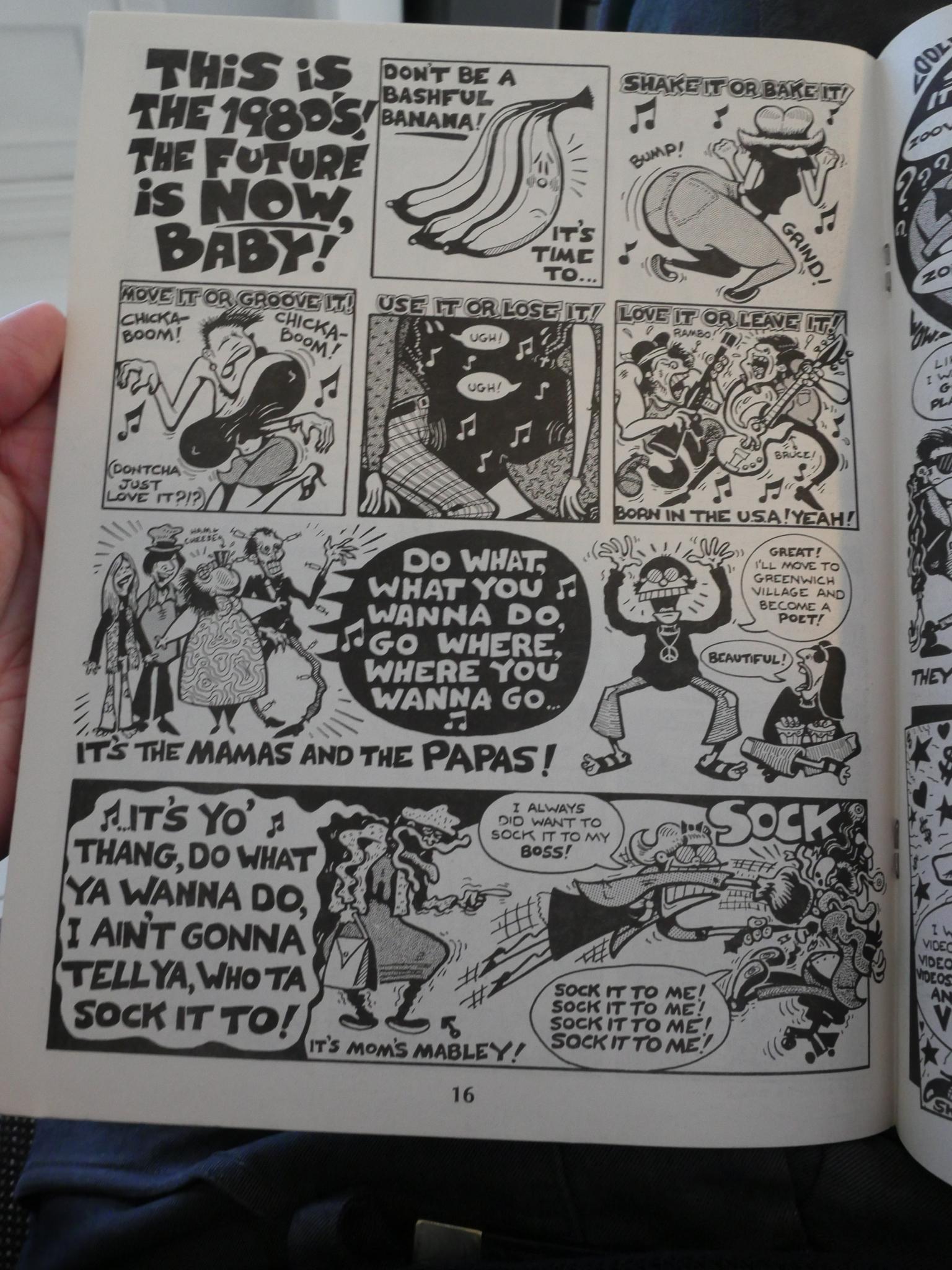 What makes Neat Stuff such a satisfying package is the way Bagge delivers these surprise oddball strips in between the recurring serials. Several of the issues also have a theme going throughout all the stories: In issue three it’s music. 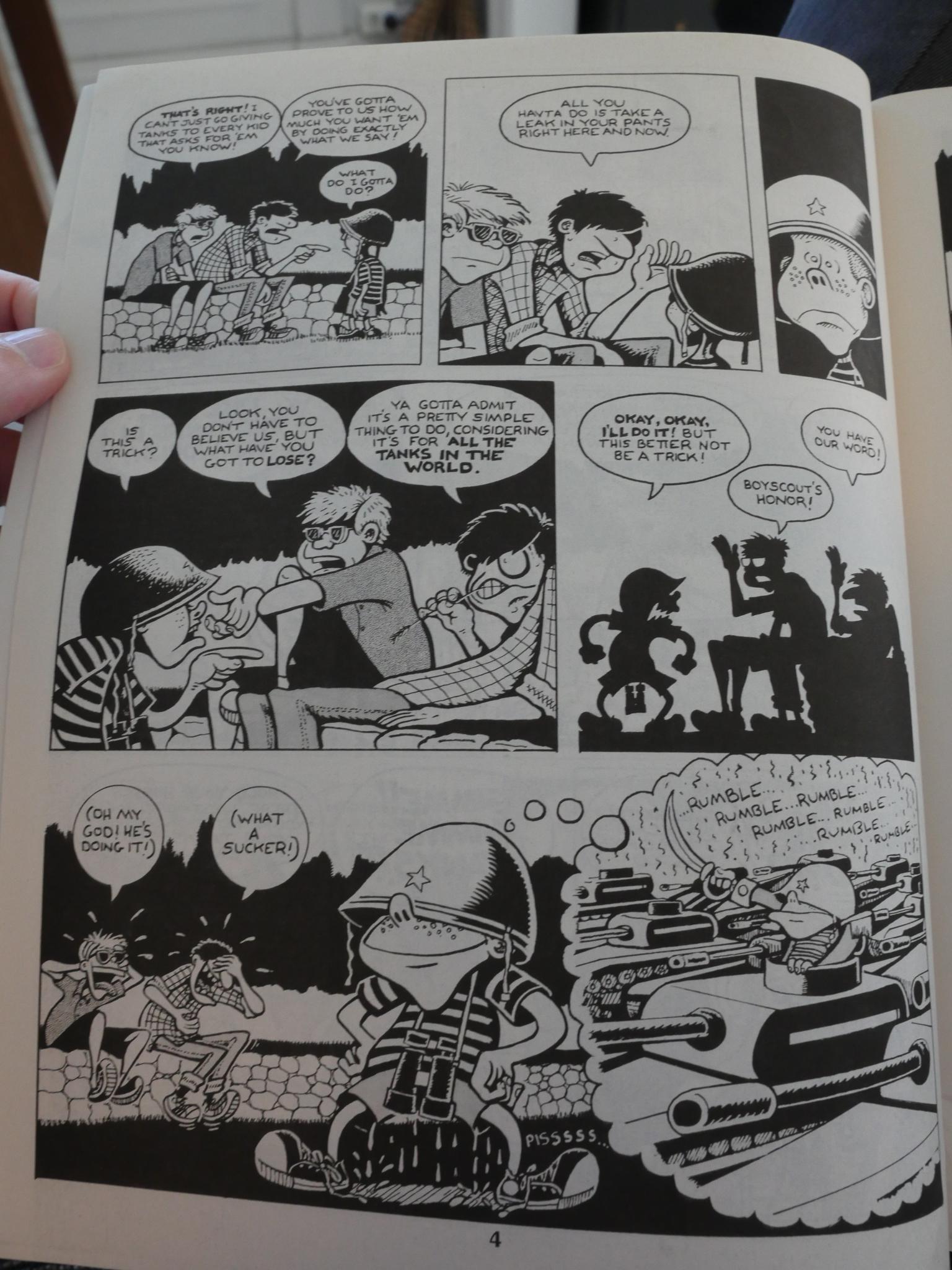 Ok, the Bradley’s aren’t totally on the sit-com track, I guess. 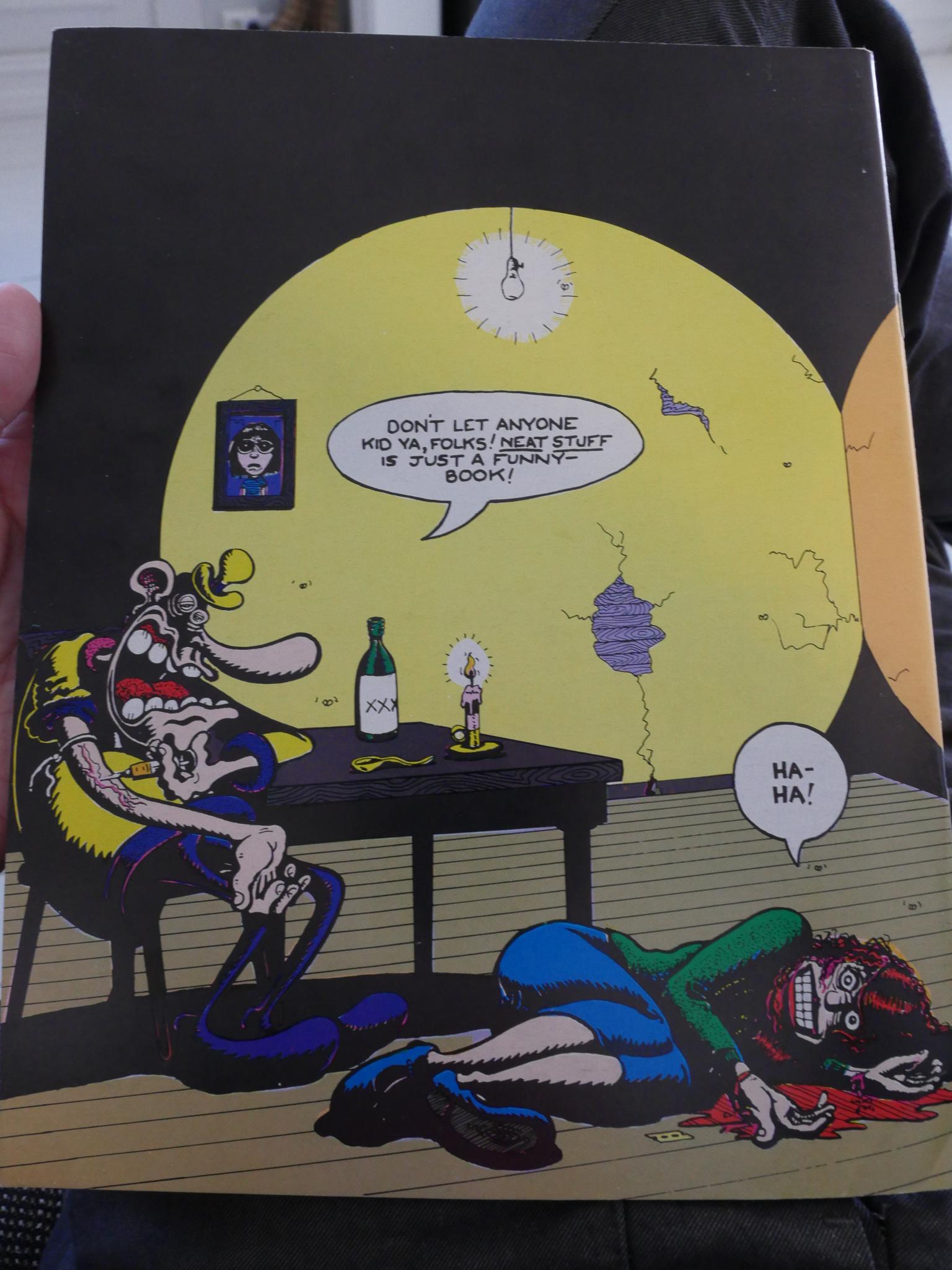 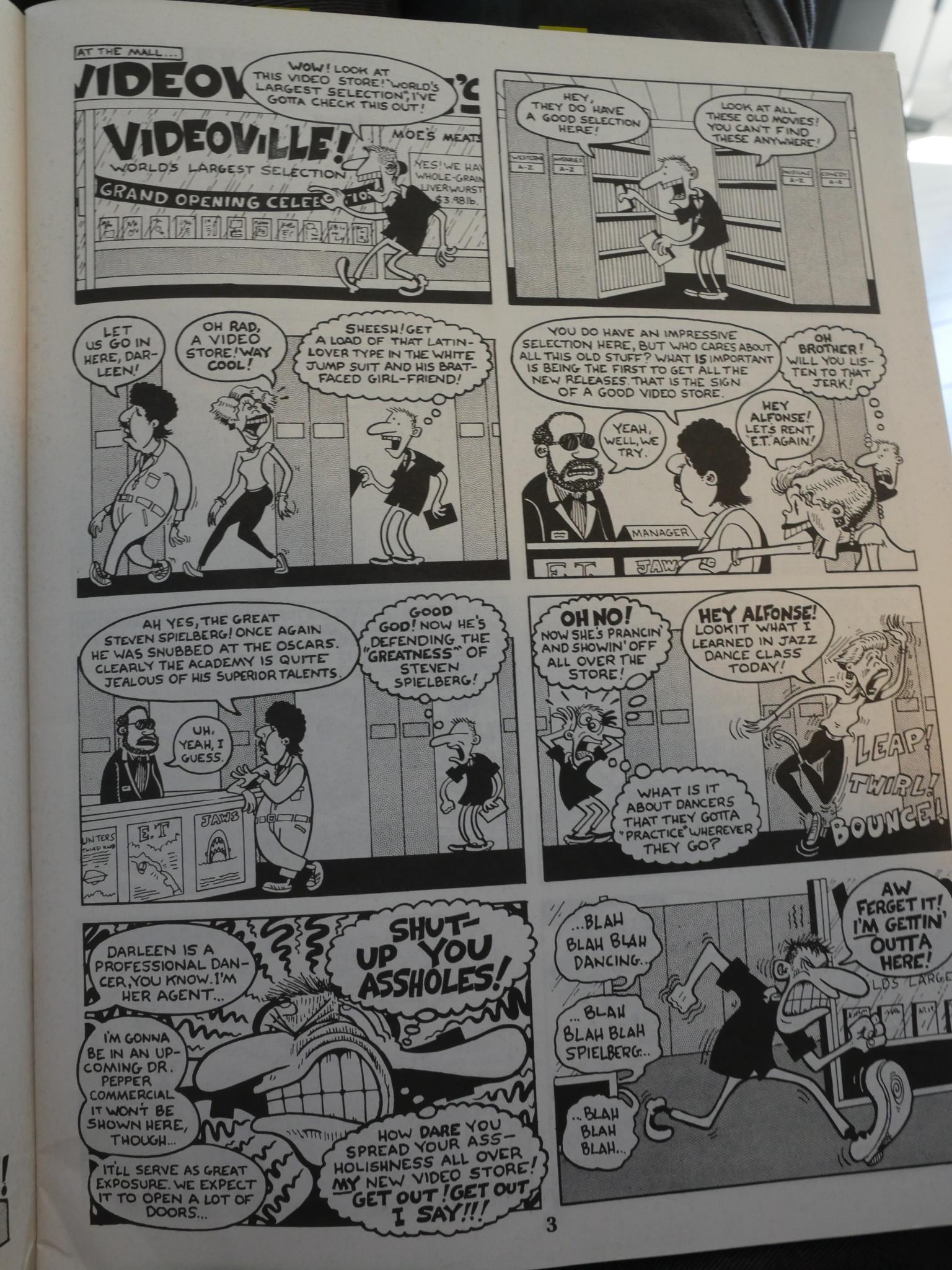 The final recurring characters are introduced in issue five. They don’t have names yet, and it seems likely to be more than a tad autobiographical. 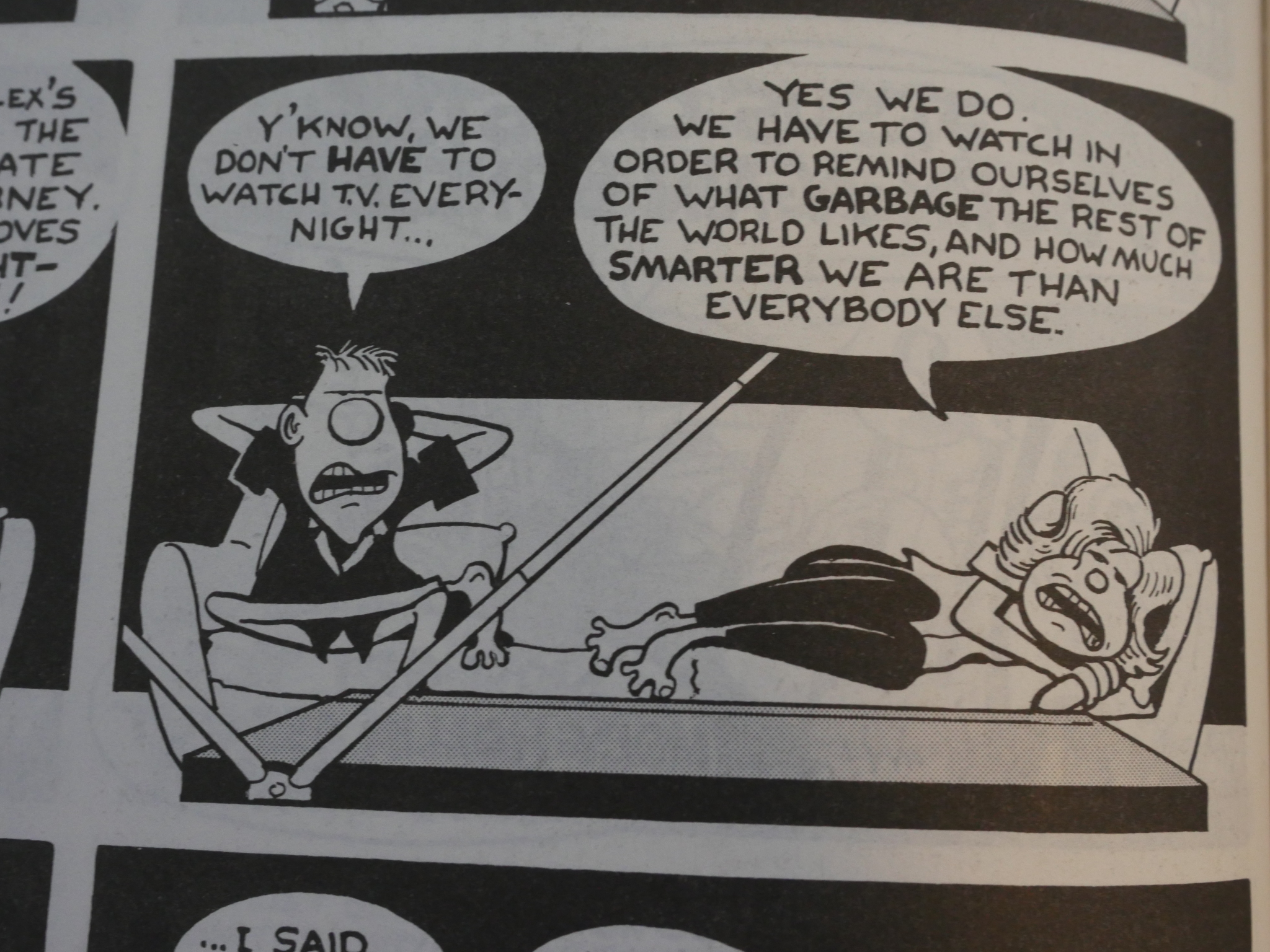 Exactly. This is basically the modus operandi of the strip: Endless kvetching. But it’s pretty funny. 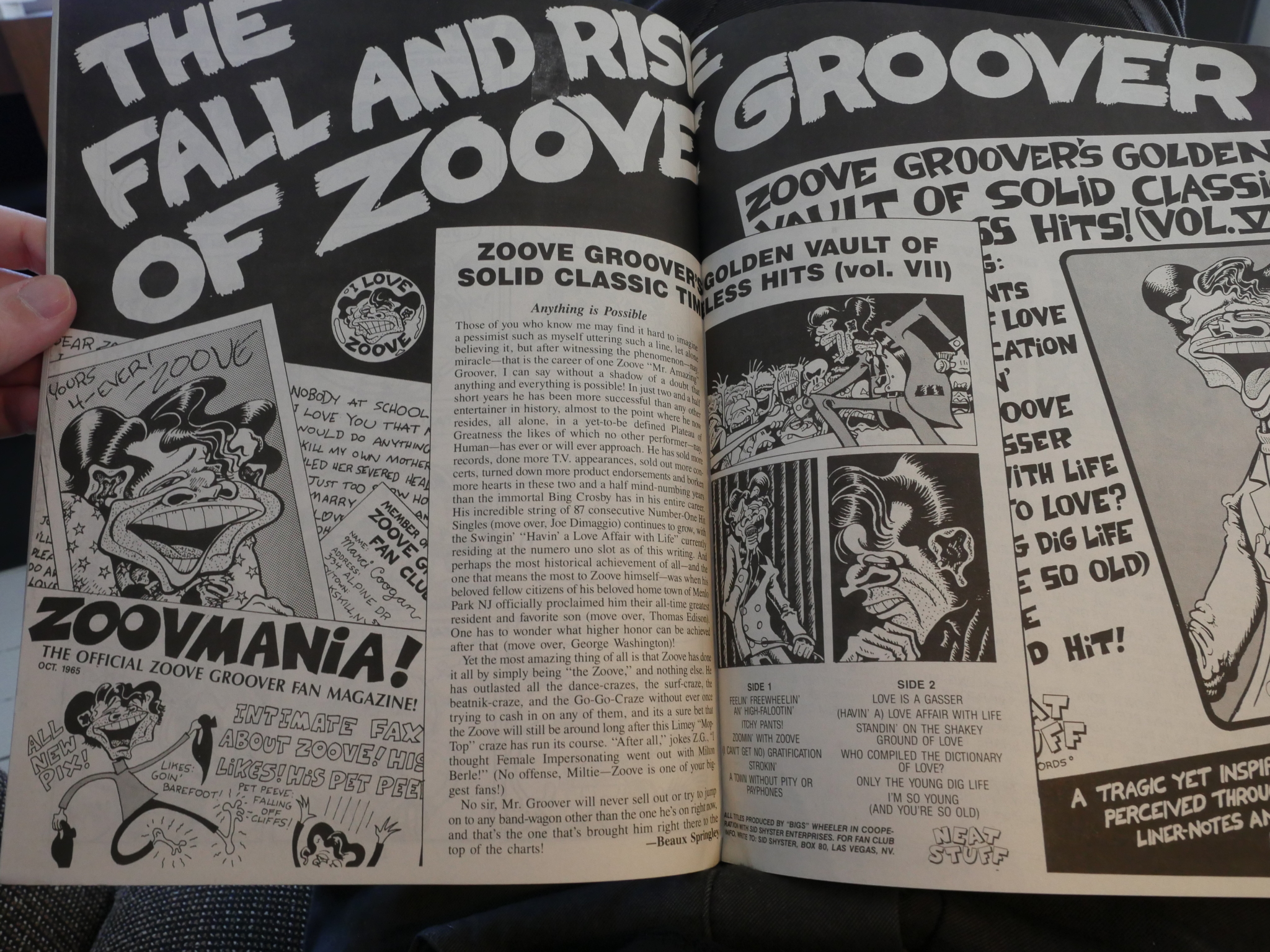 Bagge is still experimenting with the format. In the same issue, we get the story of Zoove Groover, a pop star, told through clippings from newspapers and record sleeves. 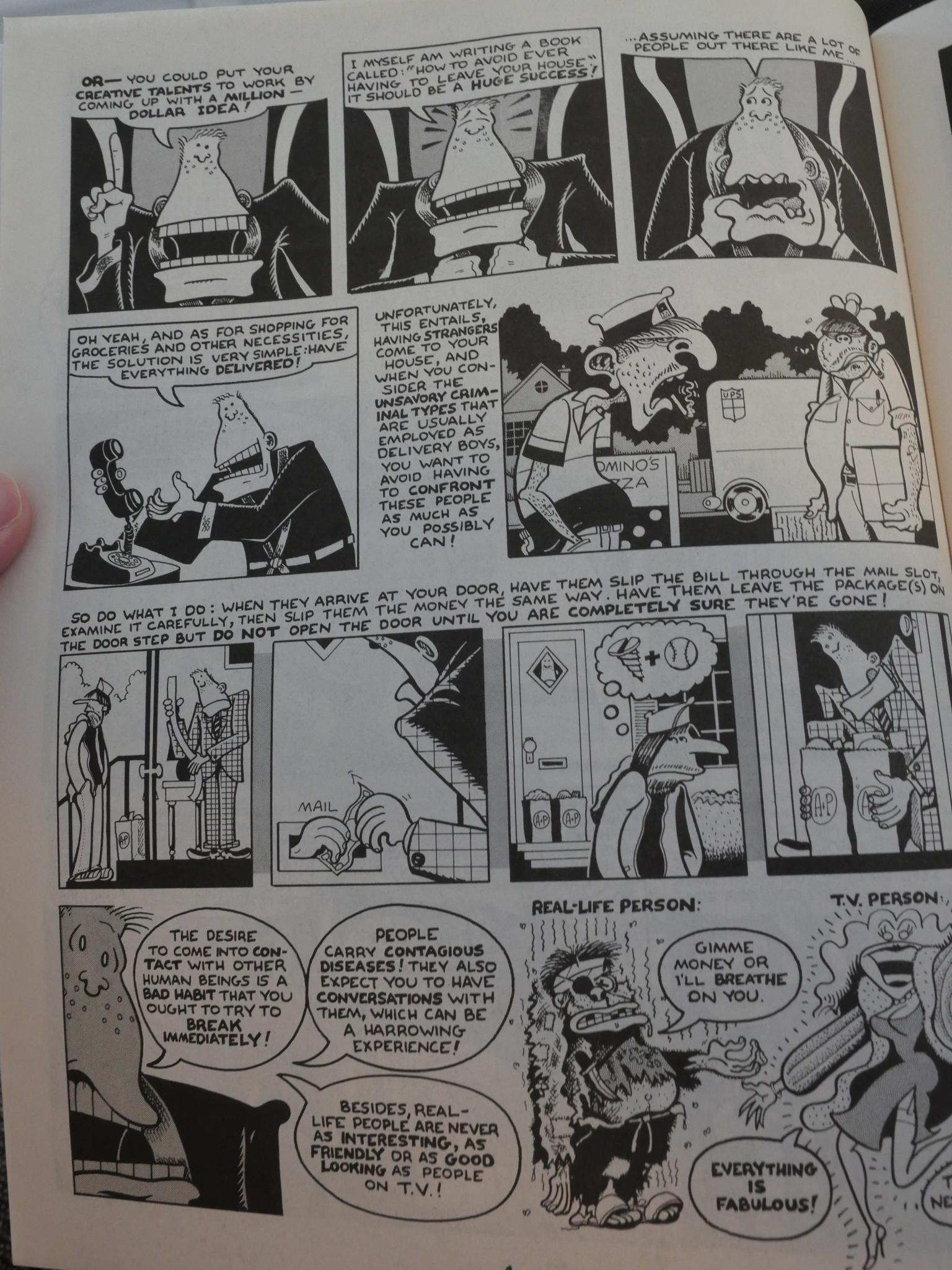 Junior explains how to best deal with the world. I’m taking notes. 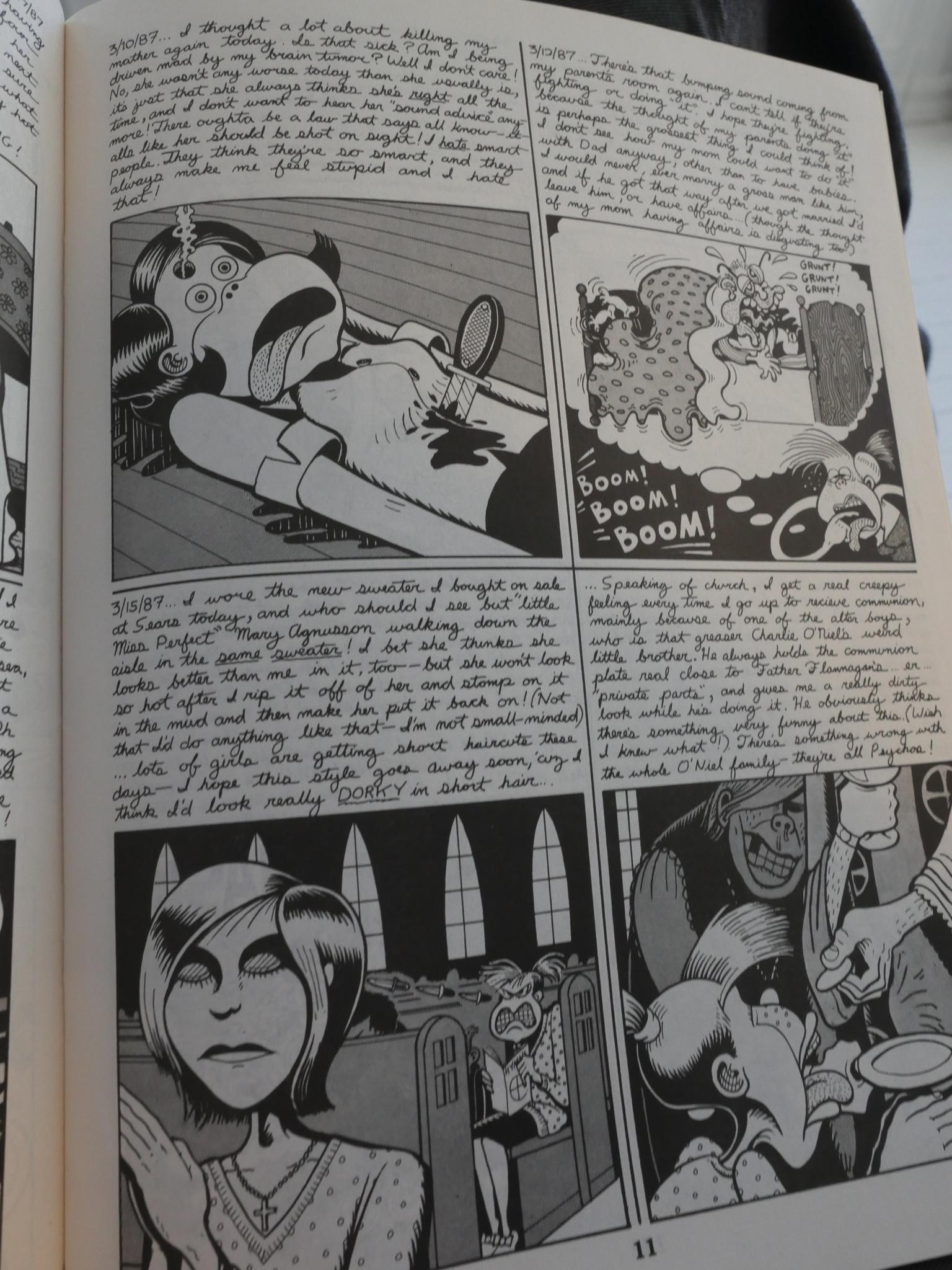 Babs Bradley tells it all to her diary. That’s an old story-telling stand by, of course, but in the Neat Stuff context, it makes things more interesting… From this point on, things seem to get less exciting. Bagge does a number of long Studs Kirby episodes that are, frankly, tedious. He also does more and longer stories featuring Junior, and these are better, but also seem to go nowhere. Gone are also the random wackiness; instead there’s virtually nothing going on but the main serials, and even they way over-the-top Girly-Girl pieces seem to be getting less inspired. 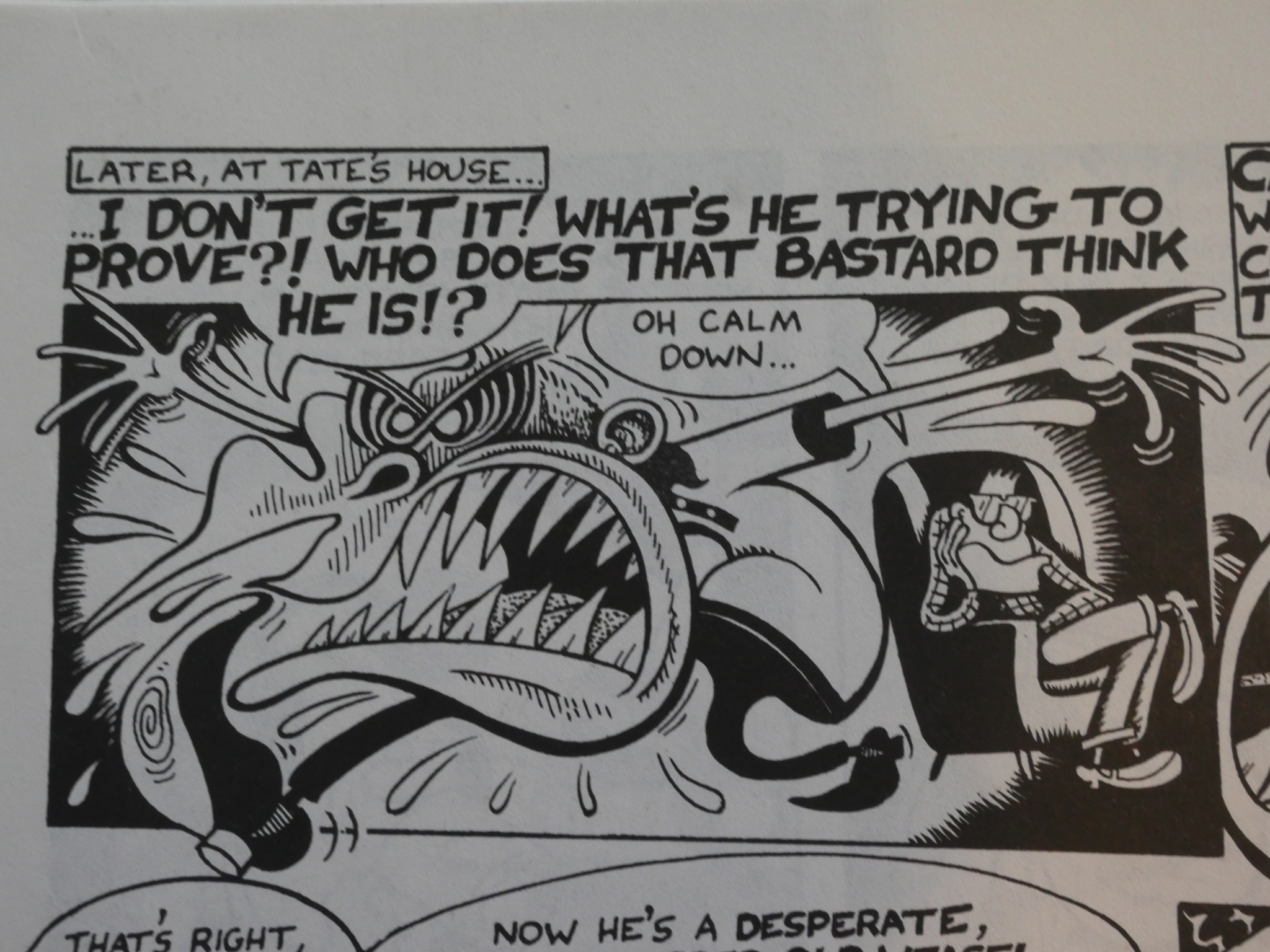 The artwork continues to evolve, though. I think that’s the most Bagge drawing ever. The pose doesn’t work as well seen from the back, though… I’m including this slightly skewed sit-com moral because of this panel, from a few years back: Obnoxious characters are great for comedy, but the temptation to make everybody more human, to give them more “depth”, always lurks in the corners. The Bradleys started off with them as total obnoxious caricatures, but by this point, they’ve all been made into fully rounded human beings. This is probably what enabled them to become the centre point of Bagge’s meteoric rise to fame in the 90s, but were they funnier when they were horrible? Issue 14 has three ten-page stories (Goon on the Moon, Studs and Junior) all told structurally the same way, as one-page strips with a punchline at the end of each page. It’s an fun approach and works quite well, especially since none of the characters are that interesting. The final issue explains why Bagge is cancelling Neat Stuff. That he’d run out of ideas for most of the characters had been pretty obvious for a while.

Anyway, I really enjoyed re-reading these comics. They’ve been reprinted in various formats over the years, but this autumn Fantagraphics is republishing them in a nice hardback format.

That’s probably going to be a nice format to read them in, but I kinda think that reading them in the floppy format is rather ideal. Each issue is a nice, satisfying chunk of madness, mayhem and humanity. Well. Except for perhaps the last few issues.

I’ll be interested in re-reading Hate later. I remember virtually nothing about that title, except that I liked it? And… Buddy grows up? And it becomes more drama like? Or something?