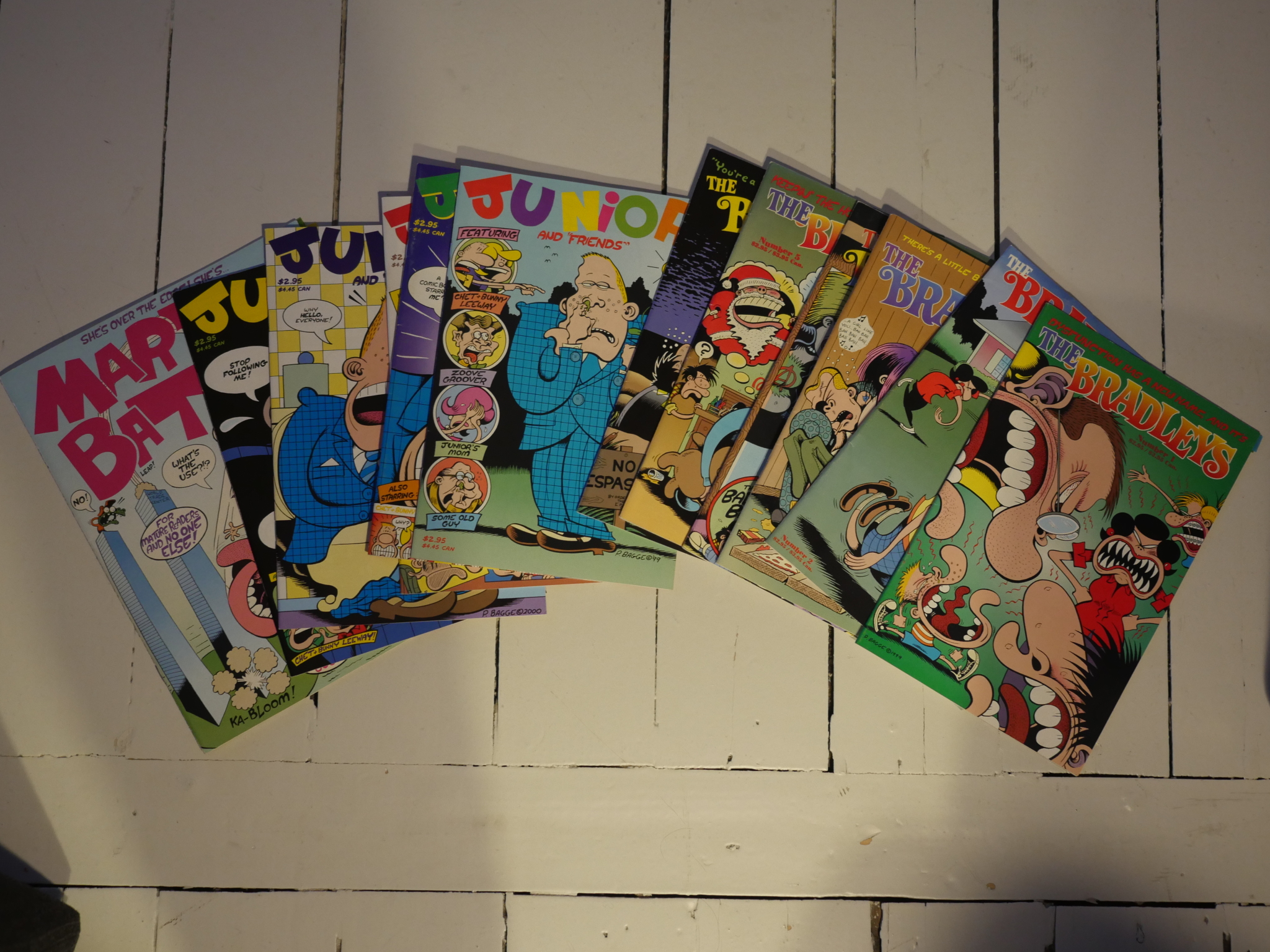 These are all reprints, and since I’ve read the books these were sourced from (Neat Stuff and Weirdo), I considered skipping them. But then my CDO fired (it’s like OCD, but with the letters in the proper order), and I went ahead and bought them anyway.

They were really cheap, and I was curious as to whether the stories had been reworked in any way. 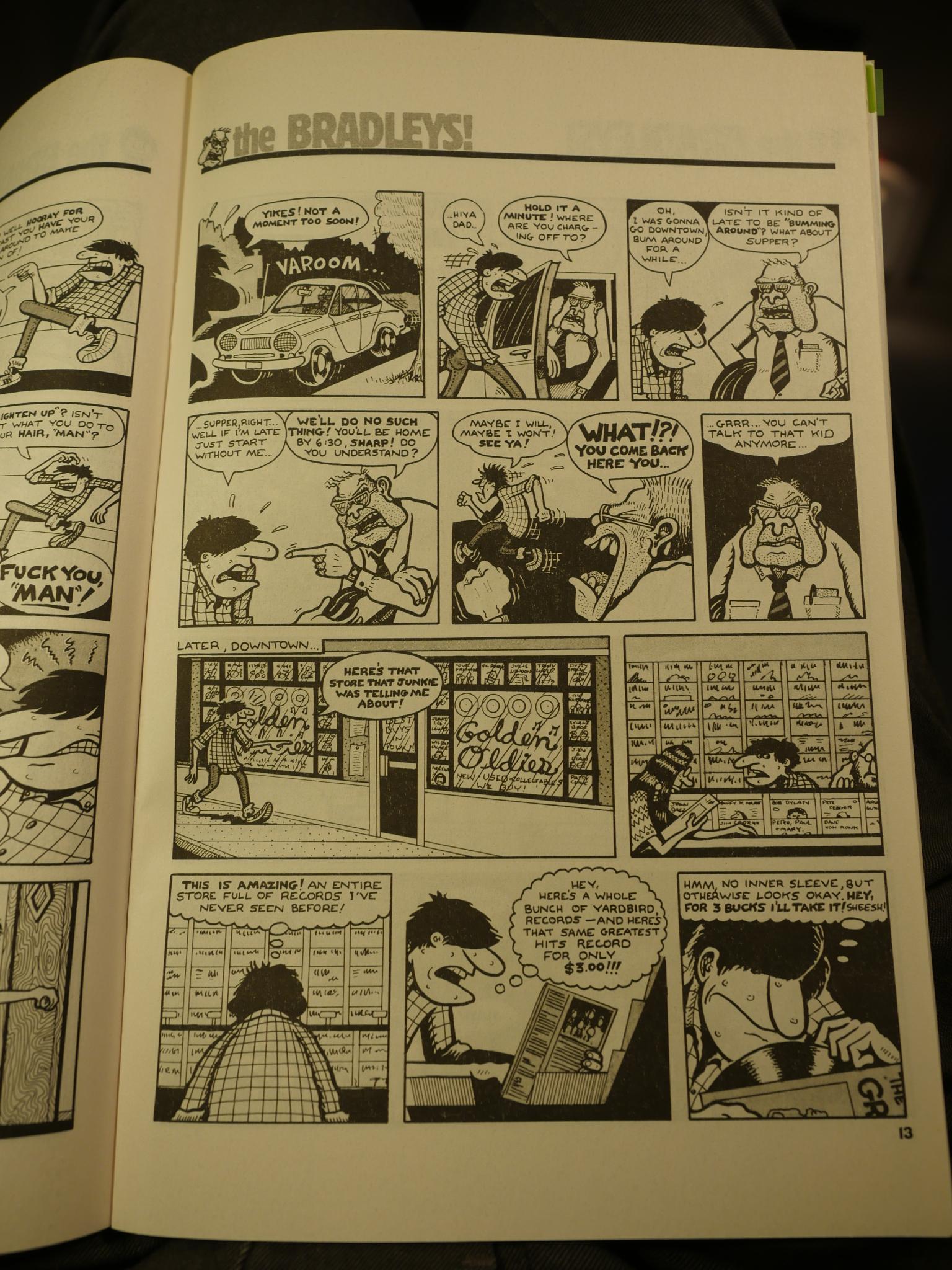 Nope. I haven’t compared the pages side by side, but the stories from Neat Stuff seem to have been plonked into the new format without any alterations. The magazine size ratio is different than the comic book size ratio, so you have these headings on the top of most of the pages to fill out some space. 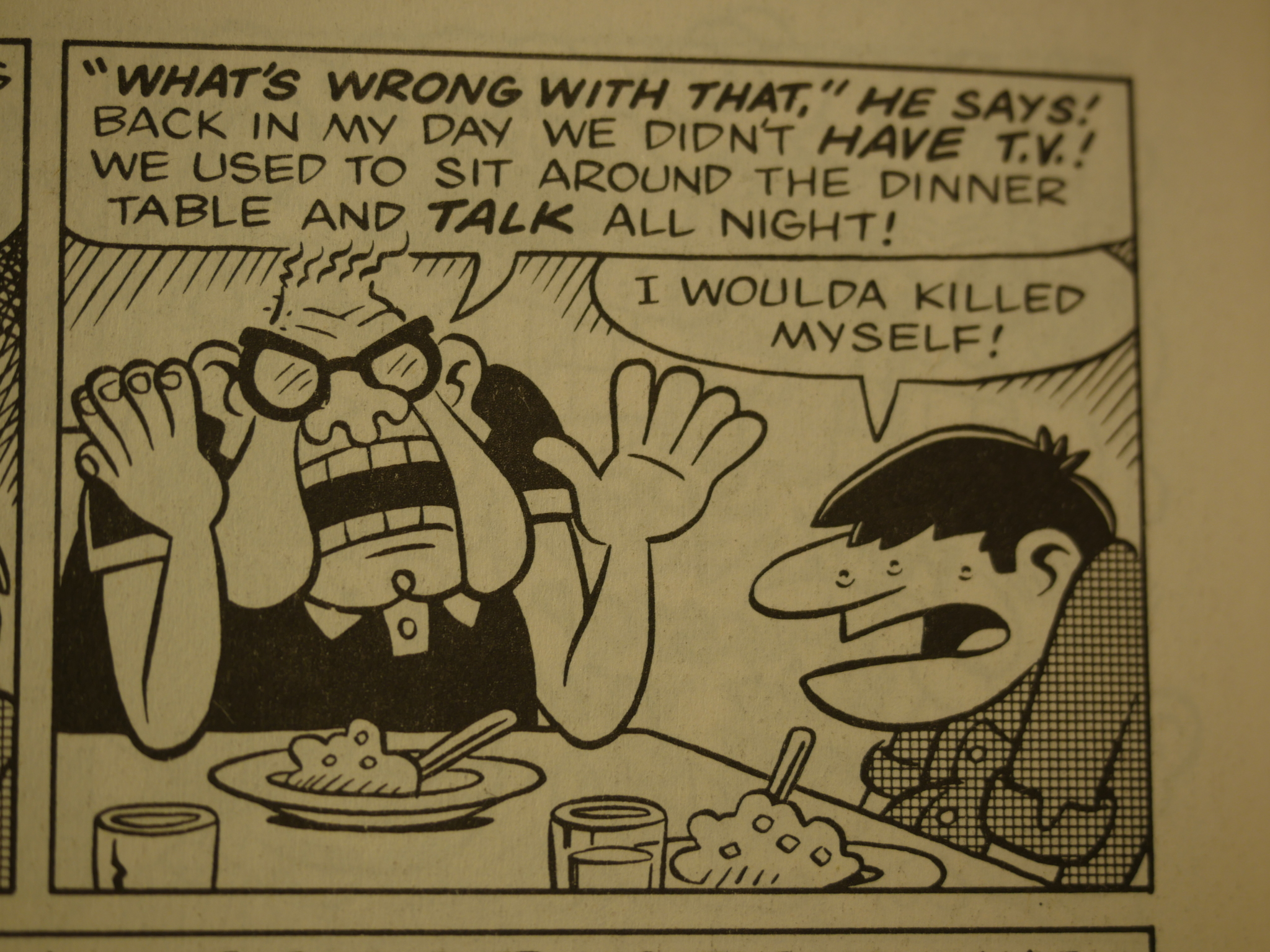 But there’s bonus features. Here’s an early piece drawn by David Coulson, who Bagge planned on starting a humour magazine with (which didn’t happen). 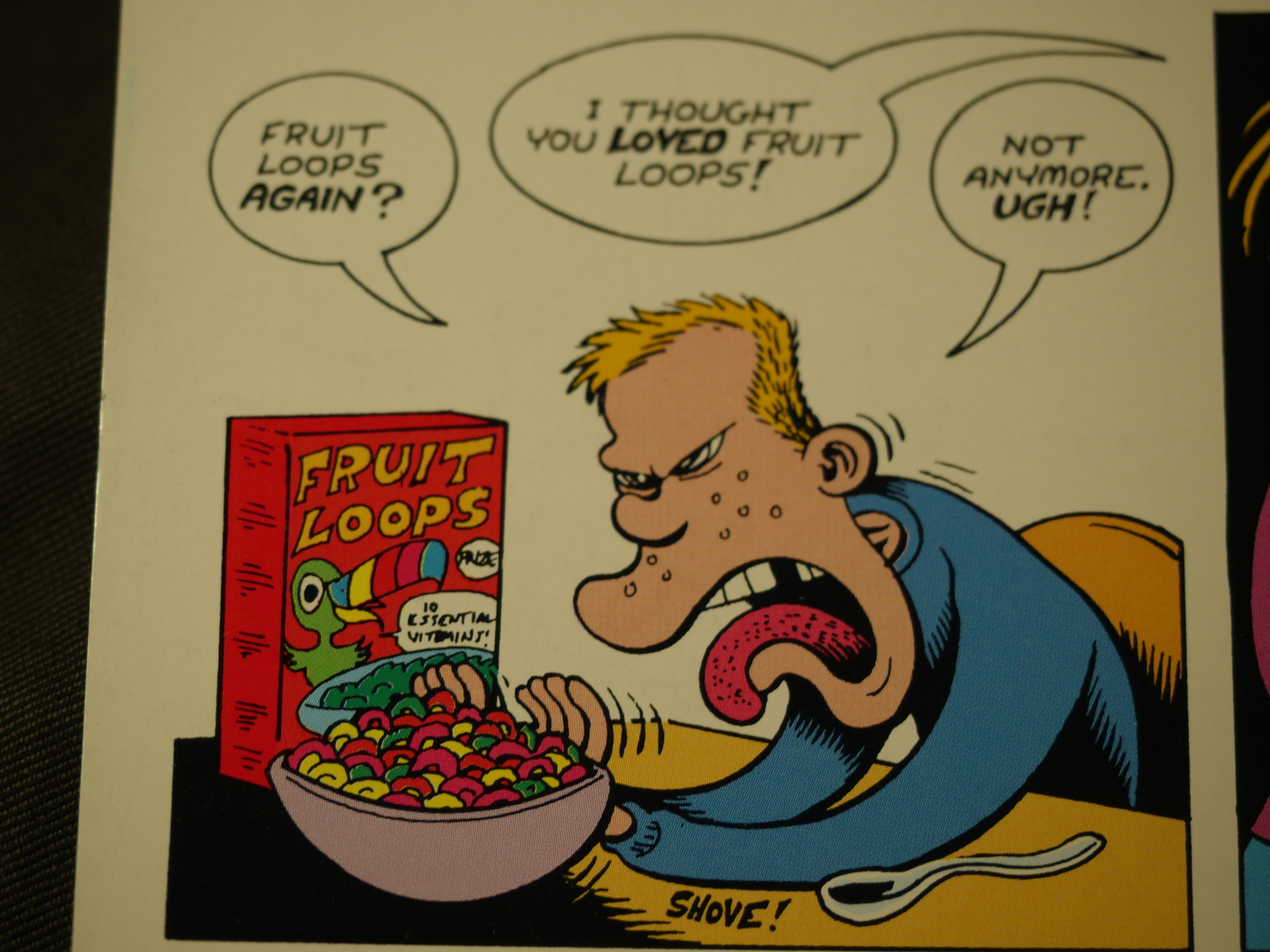 There are also new strips on the back covers. Did Bagge forget how to draw Butch? 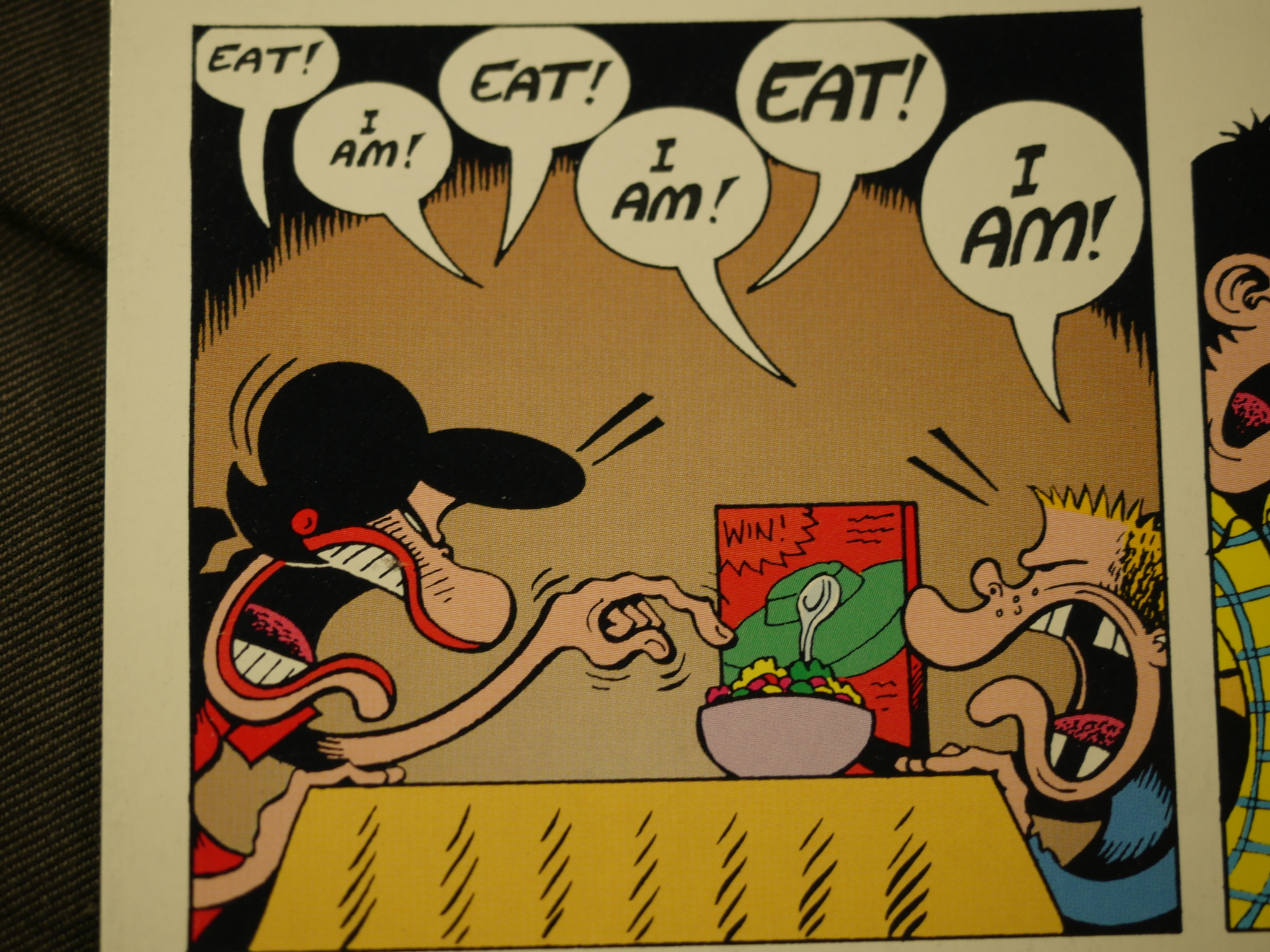 No, there he is as he used to look. 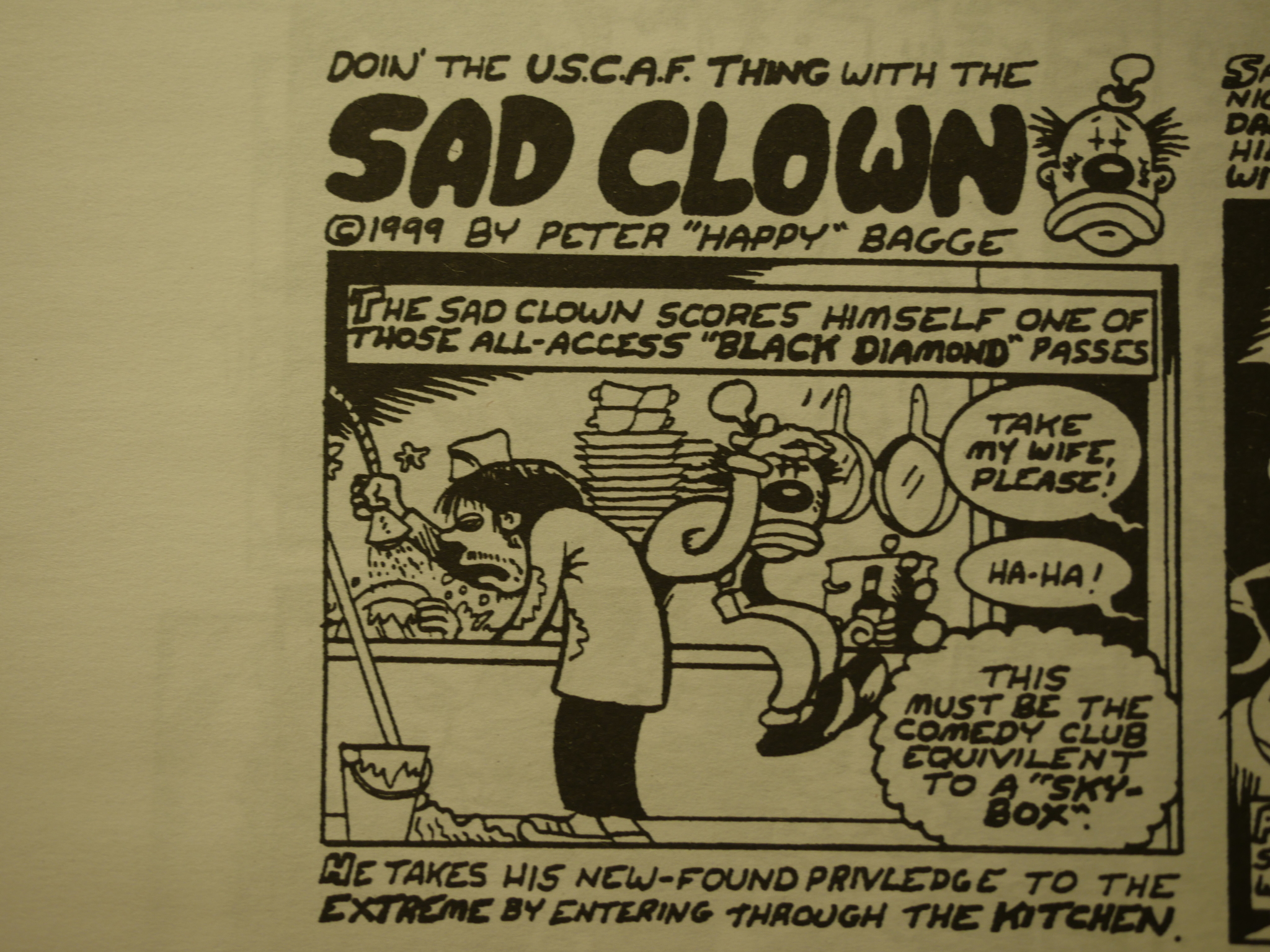 There are also random things included in The Bradleys that have no connection to the main series. Like this strip that Bagge did for a festival. Stuff like this would later be included in the Hate annuals instead. 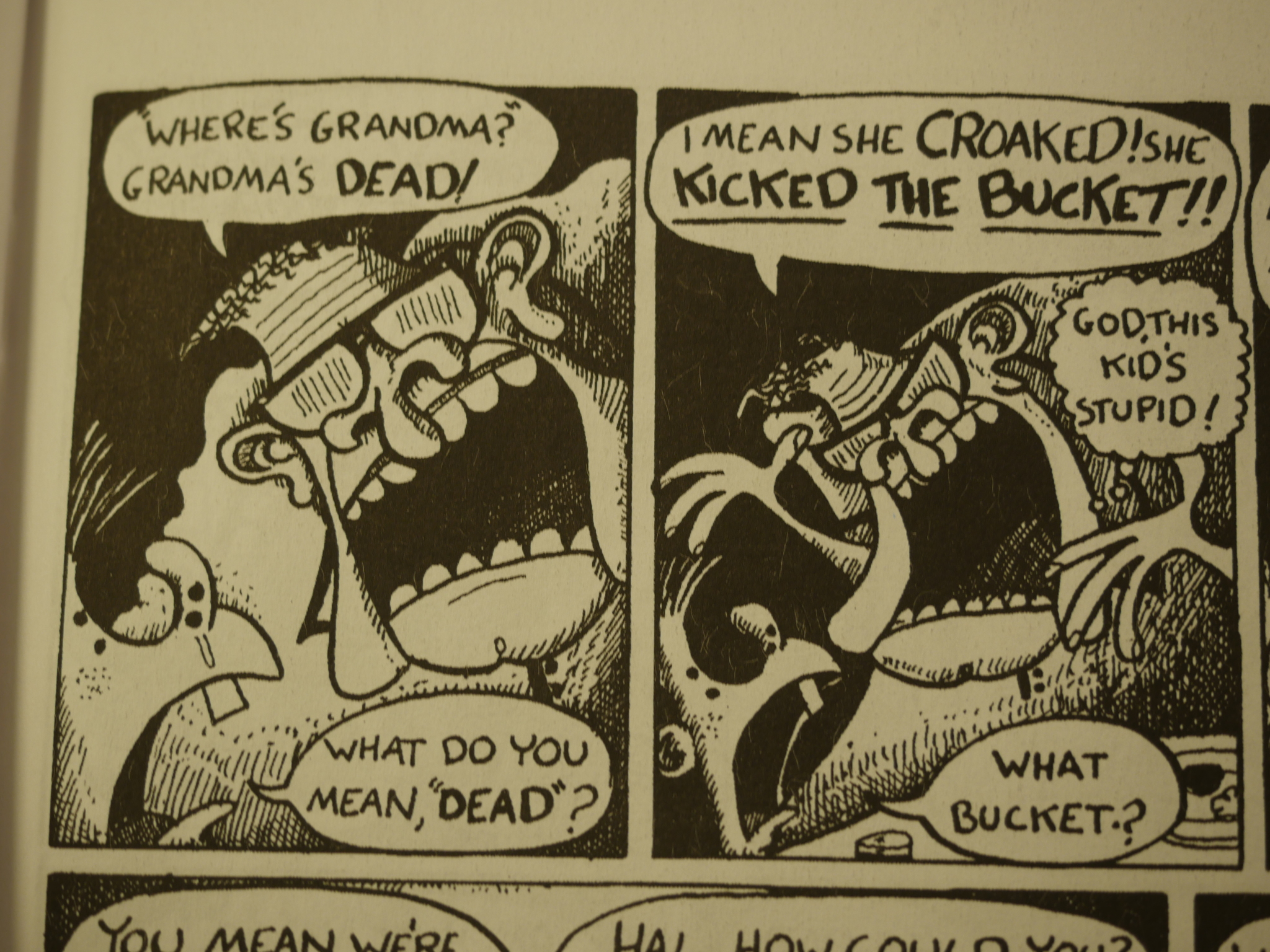 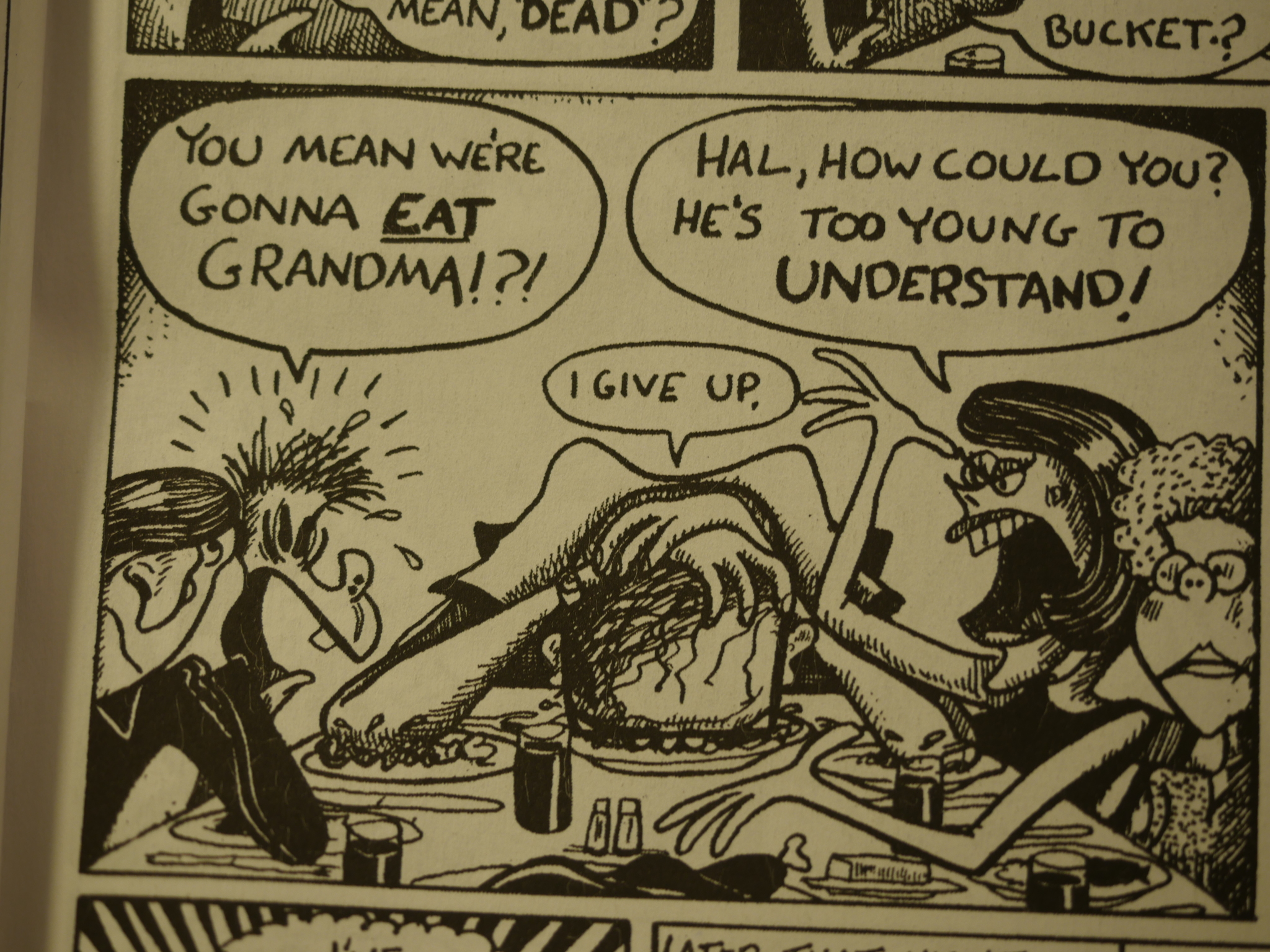 … while the other three don’t really. Especially Babs with her perm.

And here’s an even earlier piece that’s inexplicably printed “windowboxed”, which seems rather unnecessary, since it is in vaguely the same aspect ratio as the comic book, anyway… 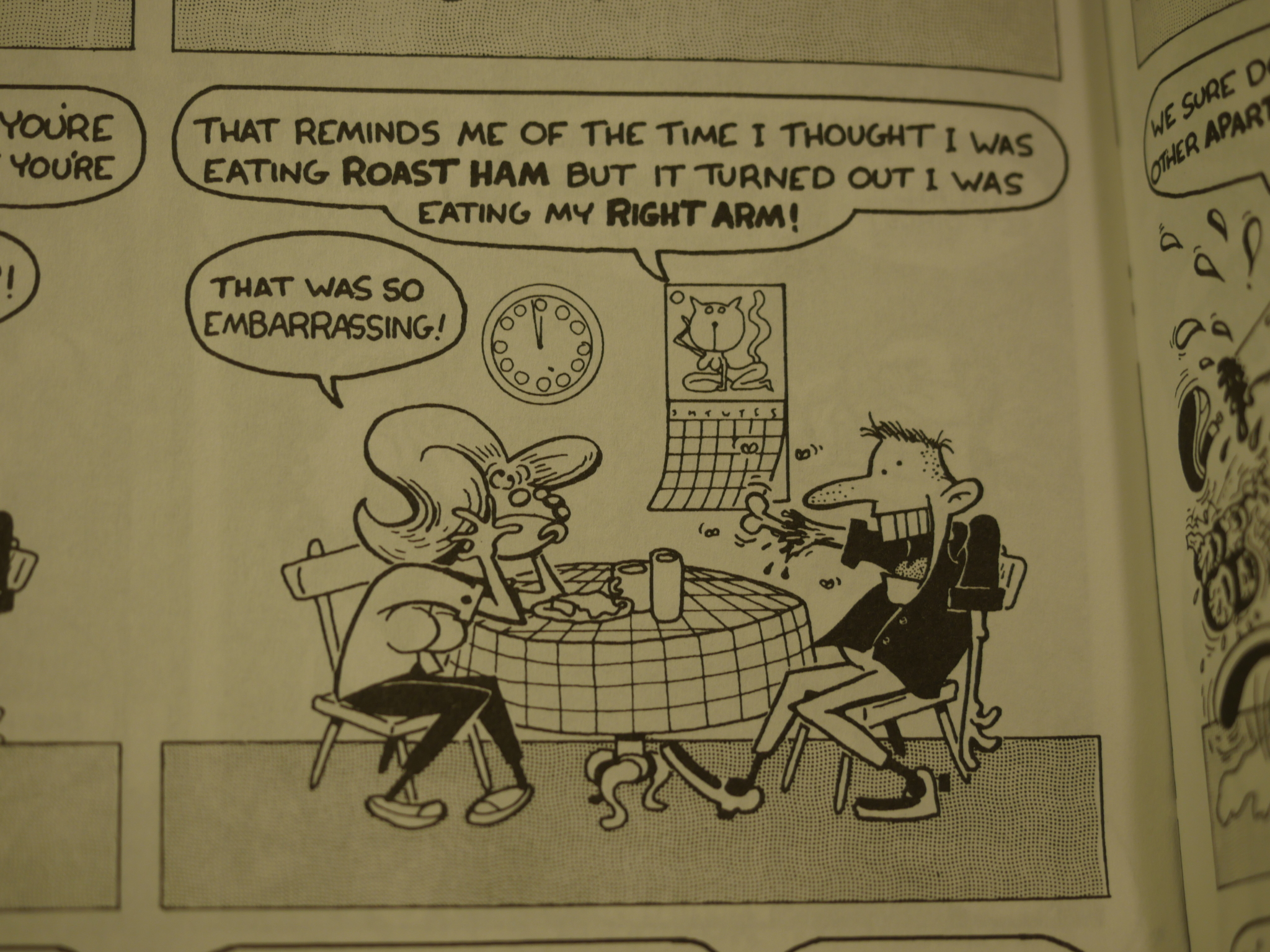 After six Bradleys issues, we continue on with the Junior series. It’s less focussed than The Bradleys: It’s really “the other stuff that was in Neat Stuff, except that radio talk show guy”. It makes me wonder whether the plan was to reprint everything in Neat Stuff this way, and whether a third and final series was planned, centring on Studs Kirby… 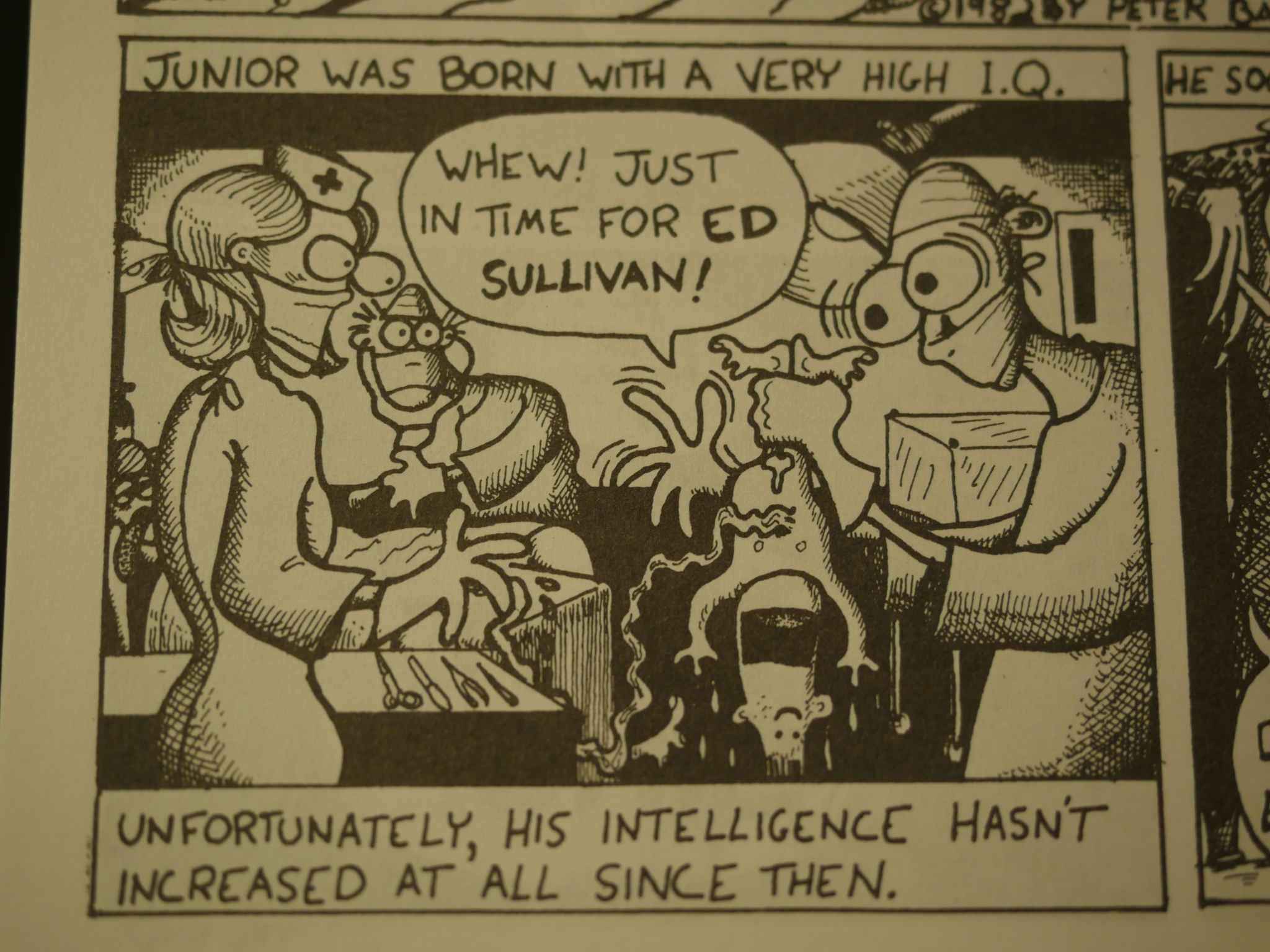 Anyway, just like with the first series, there’s also quite a bit of pre-Neat Stuff material included, and some of it’s quite funny. There’s no new back cover strips, though. 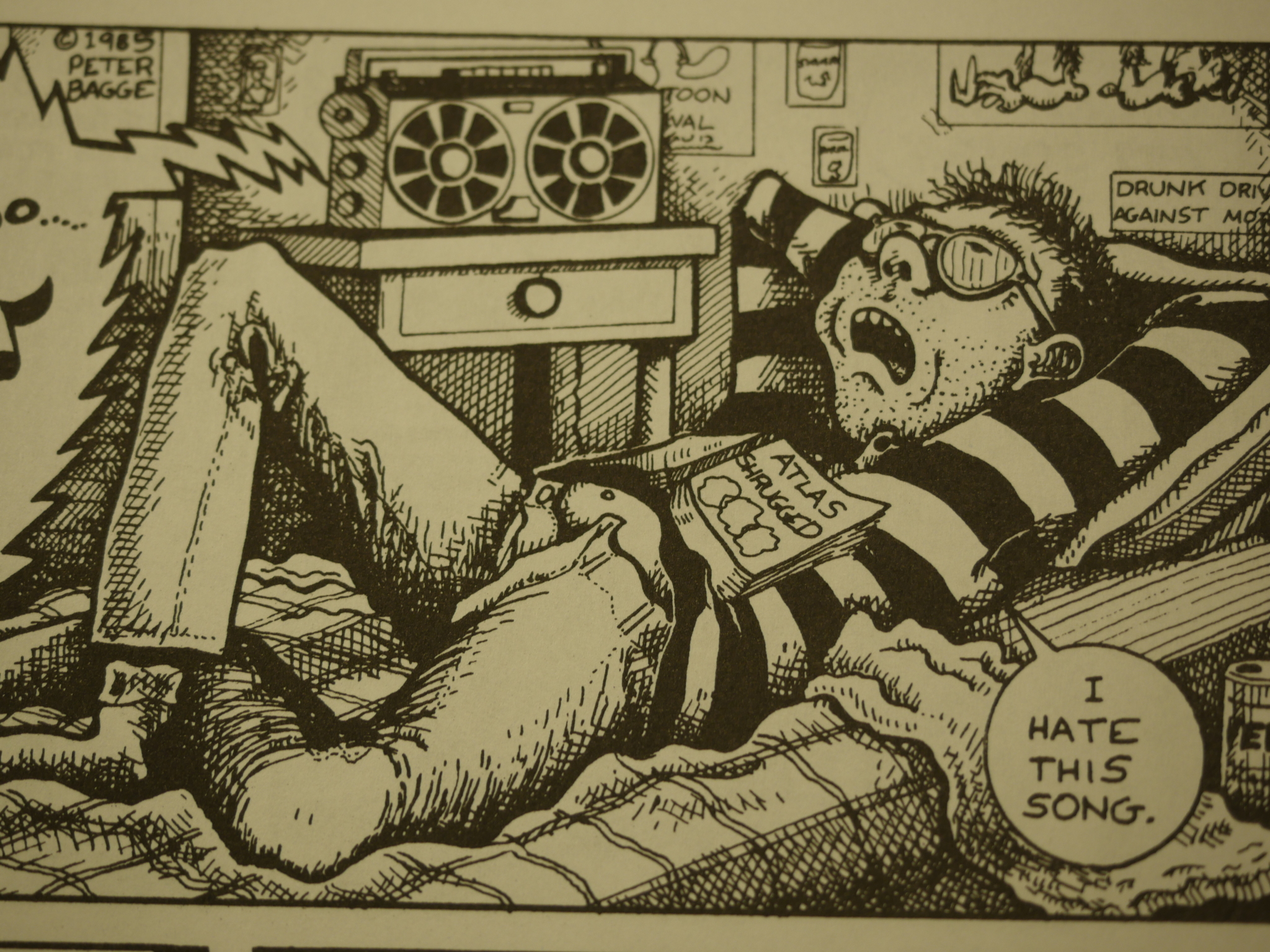 I was rather intrigued by this art style, which is something Bagge hasn’t used a lot. And the story is perhaps autobiographical, what with Bagge being a libertarian and all… 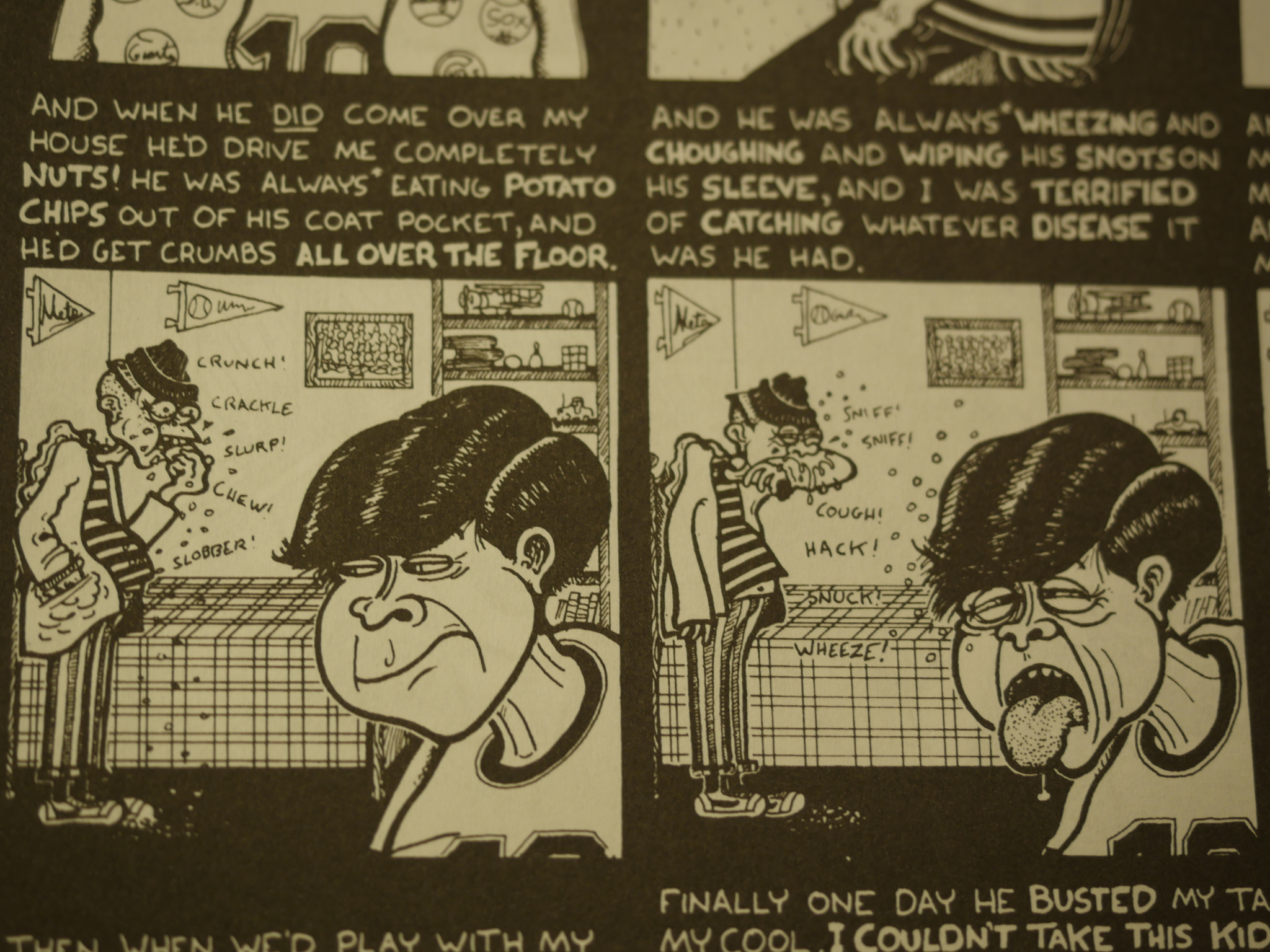 And a rare childhood reminiscence. 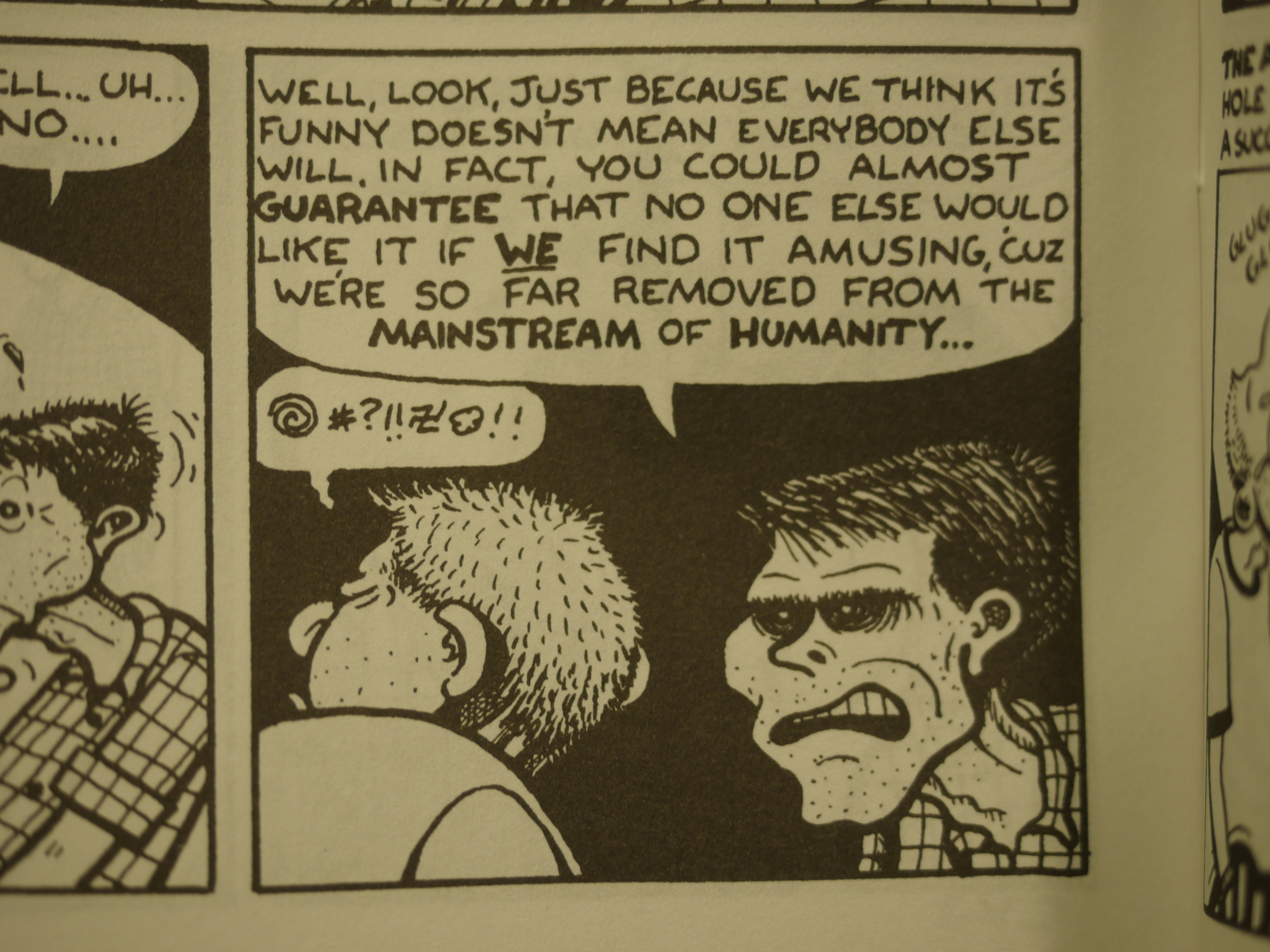 Oh, it’s such a struggle to be so superior. 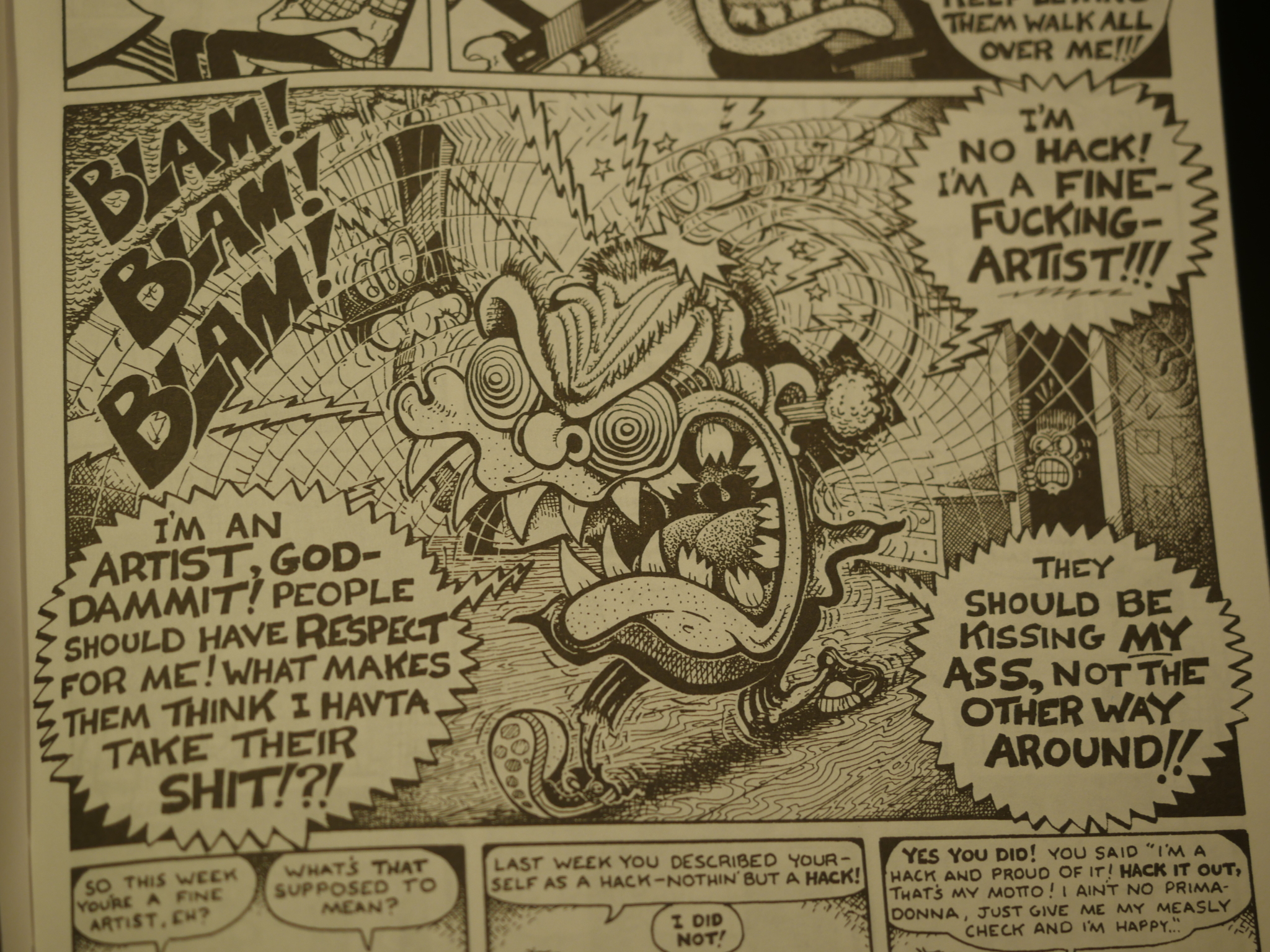 Wow! That’s a most excellent freak-out.

I don’t know whether the extras in these two series have been reprinted anywhere else, but I’m happy I went for it and bought these books. Reading these weird early stories has been rather pleasant.

And last we have Martini Baton, written by David Carrino: 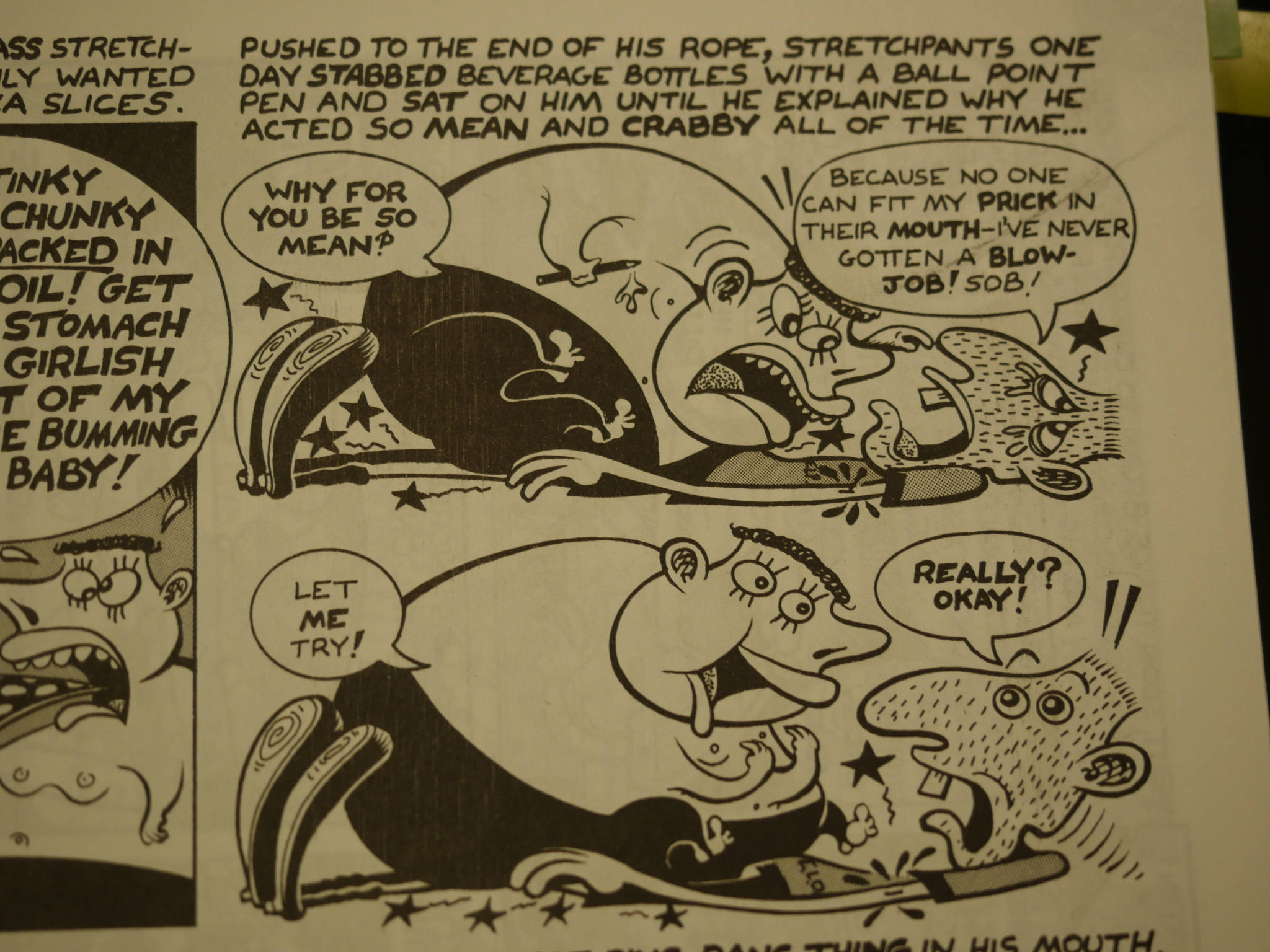 The bulk of the magazine-sized book is taken up by the titular Martini Baton series (which are printed sideways). 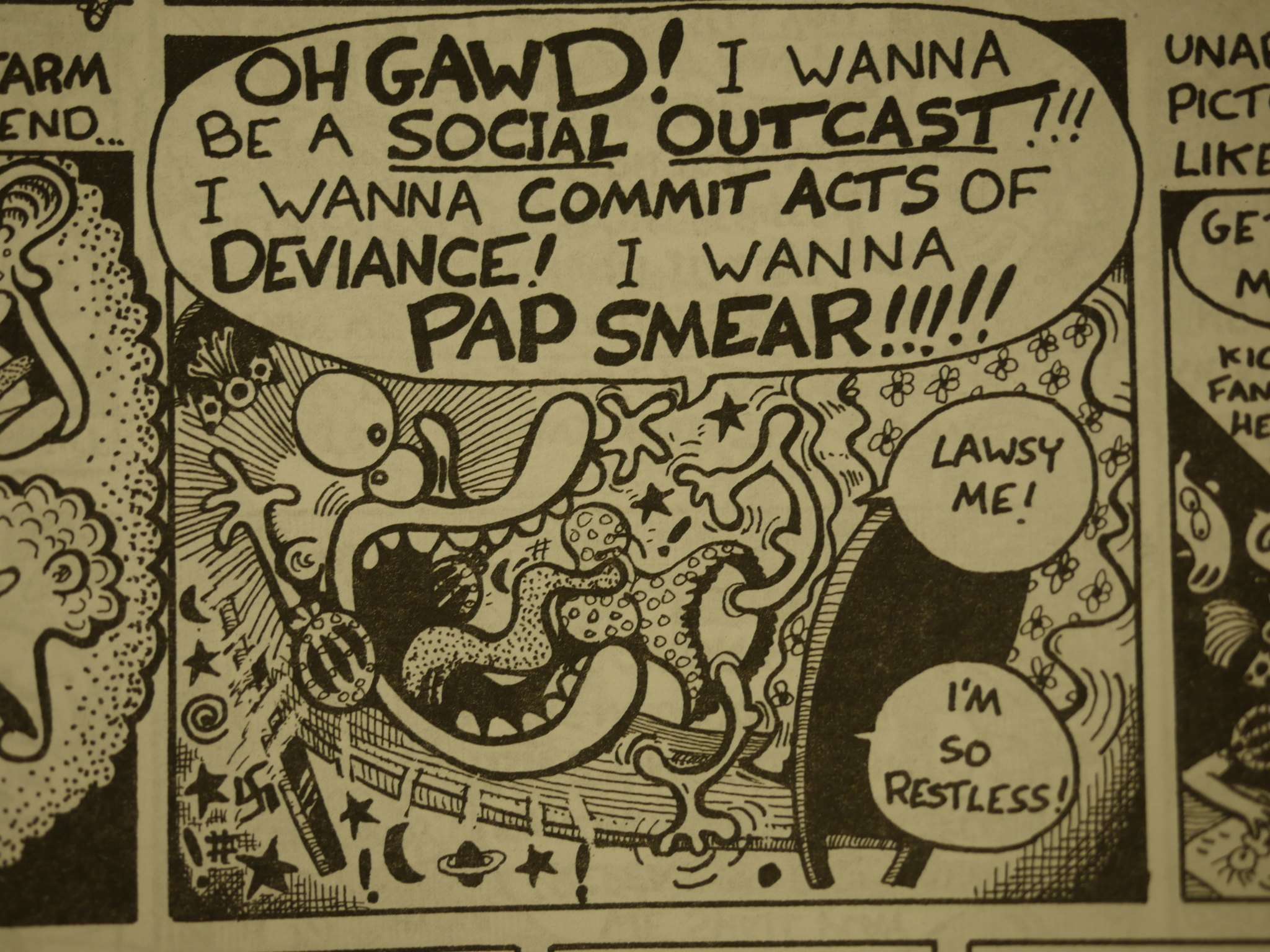 It’s deranged and it’s funny. And it has a lot more of a coherent story line than I remembered from reading it in Weirdo. There’s a little strip running beneath the main attraction called Jesus’ Critters, where we learn a lot about religion. I assume that Carrino is a (lapsed) Catholic. I never knew that about the pope! 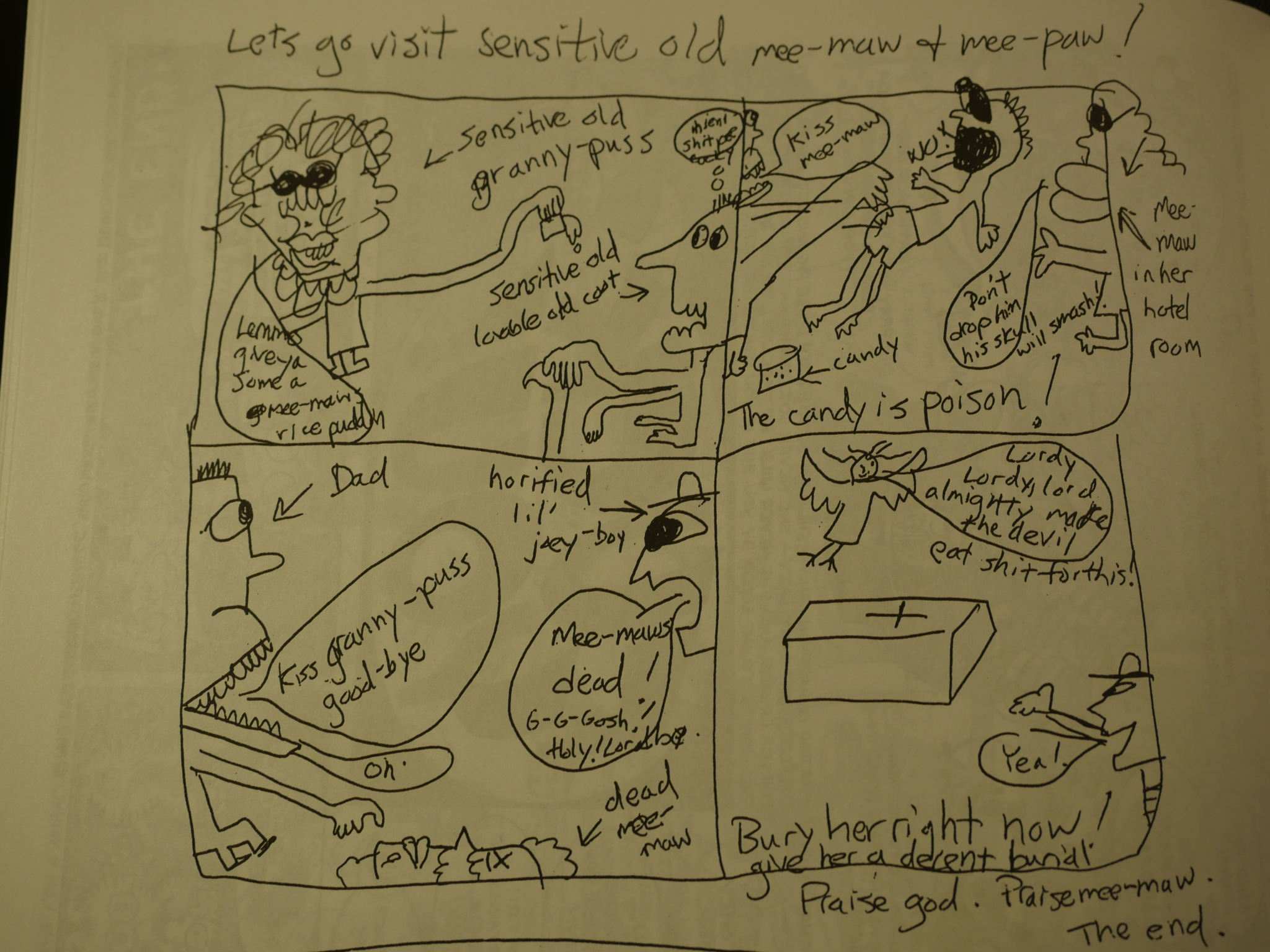 And finally we have an example of Carrino’s original strips before Bagge drew them for publication.