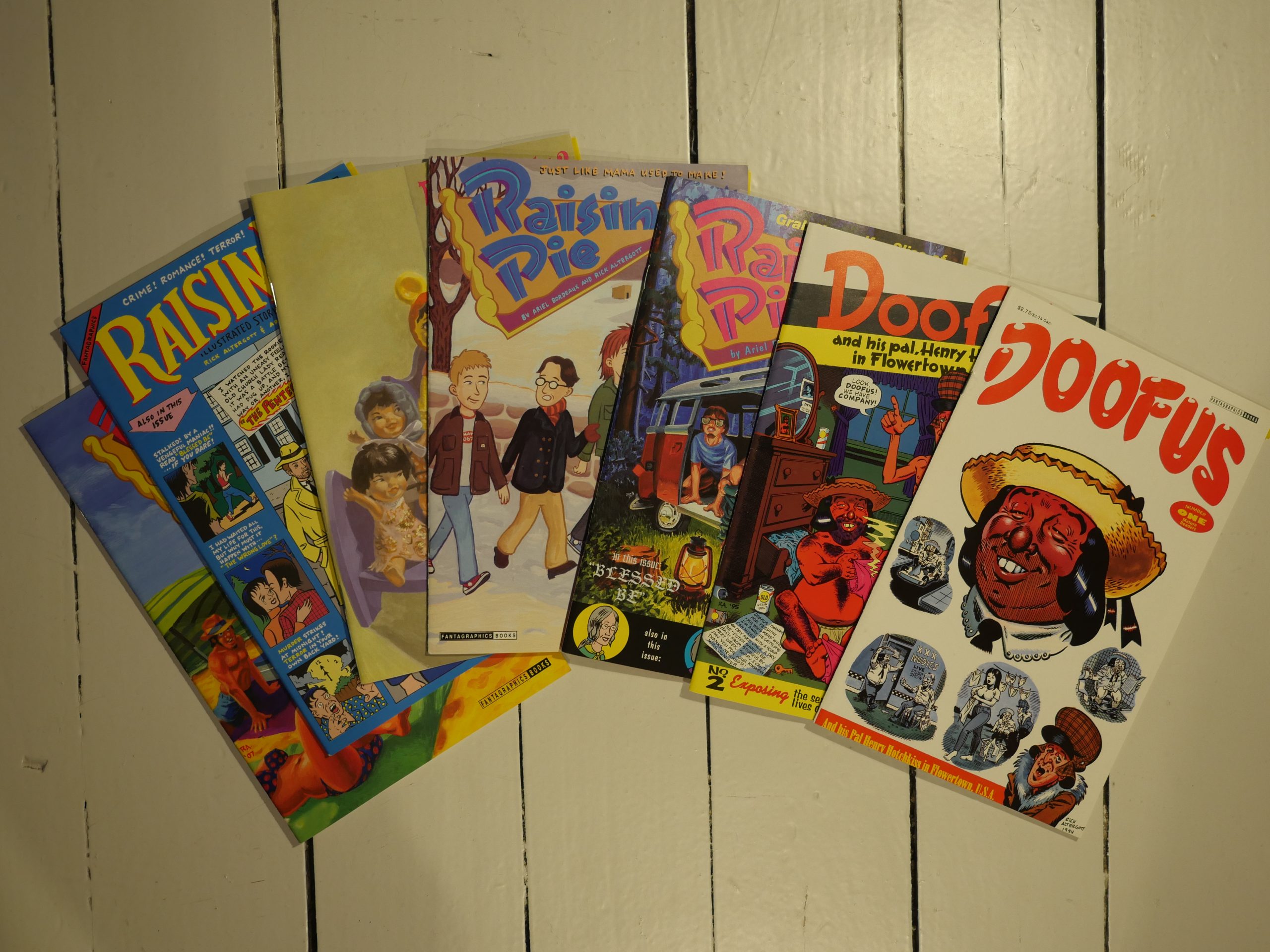 Doofus had been running in various anthologies, but must prominently as a backup feature in Hate. So spinning it off into its own title probably seemed quite natural. 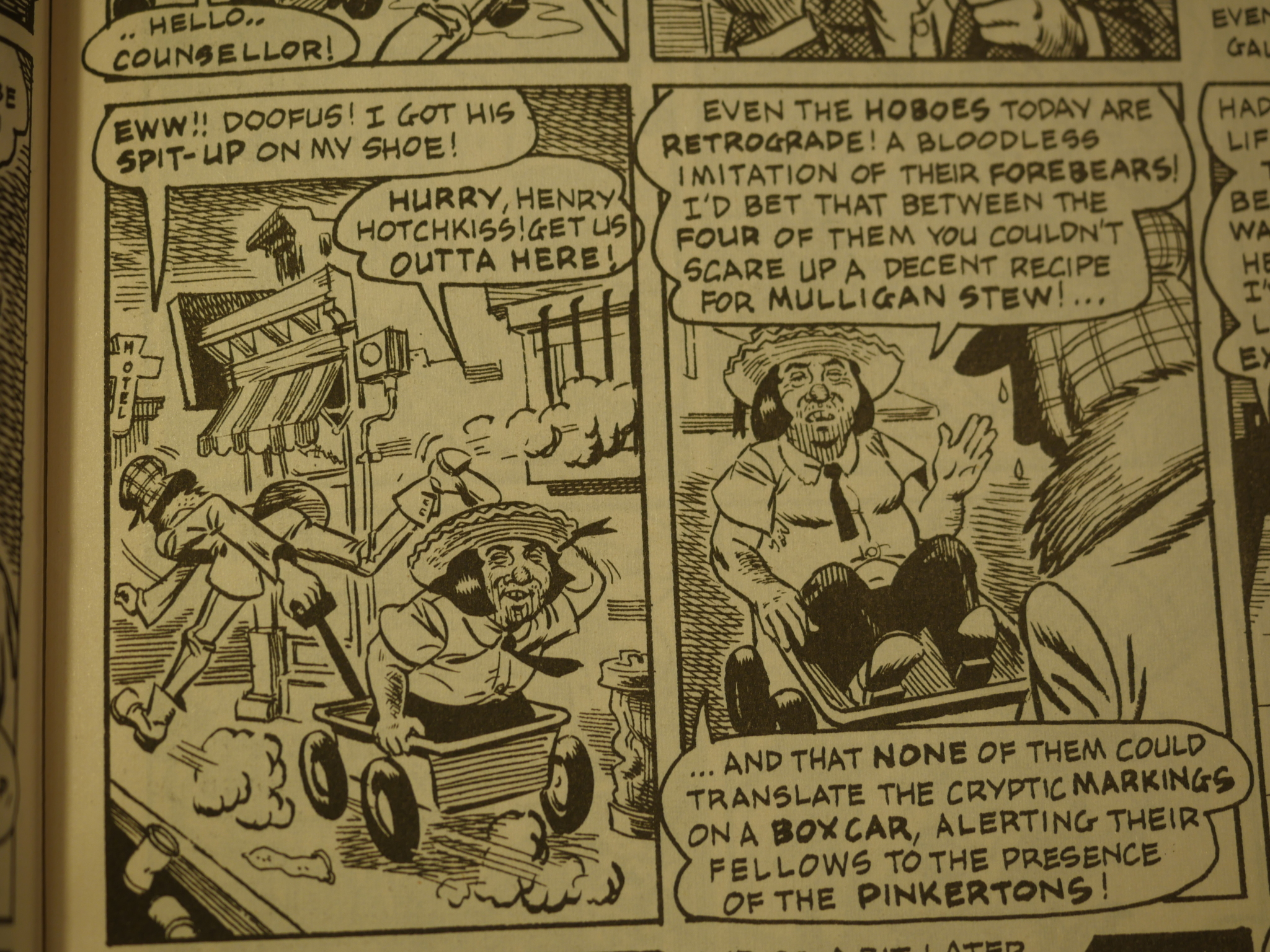 I’ve never enjoyed reading Doofus, but haven’t really examined why. It’s obvious why people would find his artwork attractive: It’s got that Wally Wood sheen going on. It’s like Altergott’s art style was based on just reading those few appearances of Wood in Kurtzman’s Mad. 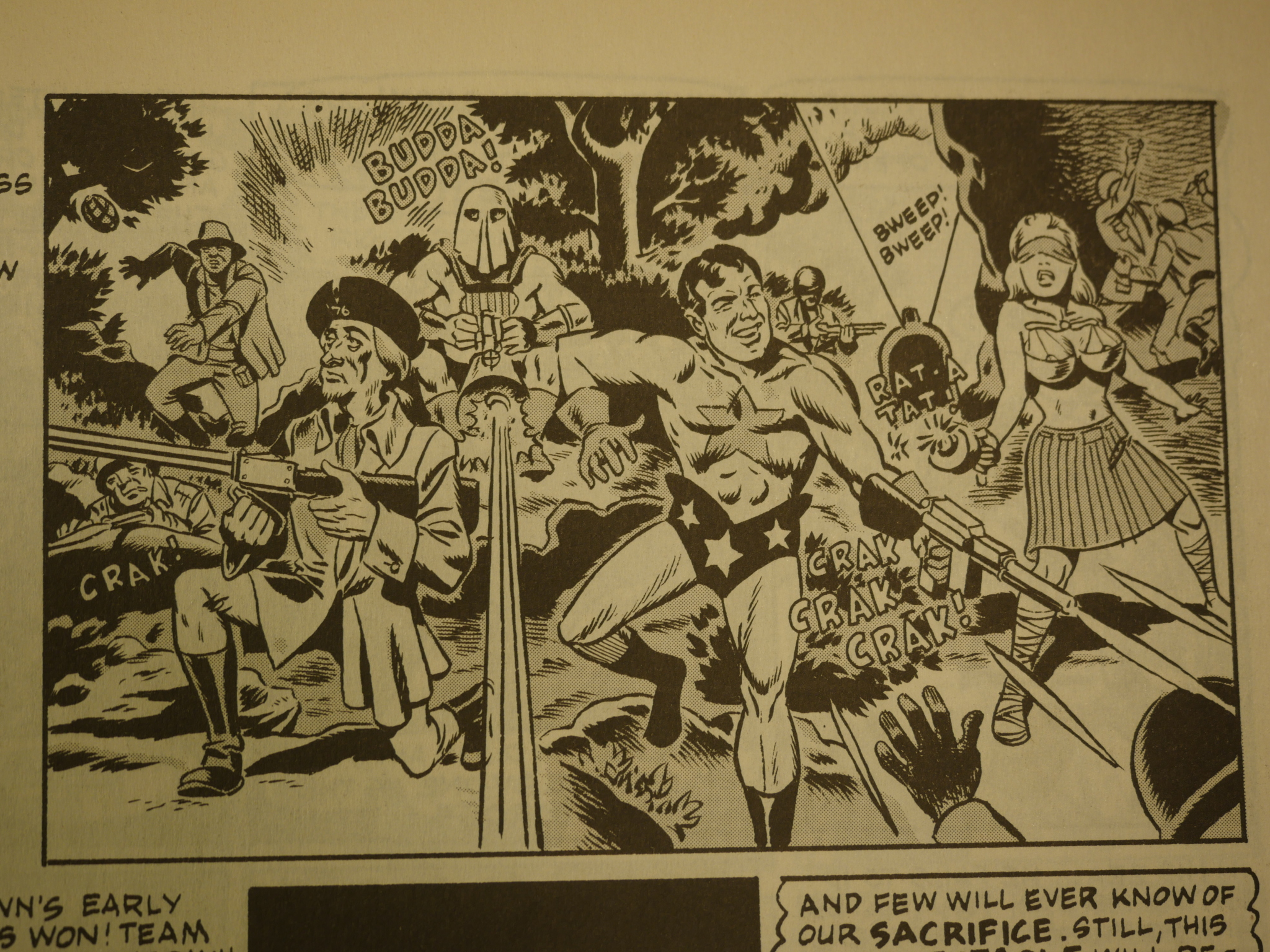 Wally Wood drew plenty of stuff figures; sure, but Altergott takes that one step further. What the fuck is going on here? I know it’s supposed to be funny, but this makes no sense. Perhaps my main beef here is the bad anatomy and proportions: Most of the heads are vaguely too large, giving this all a queasy quality. 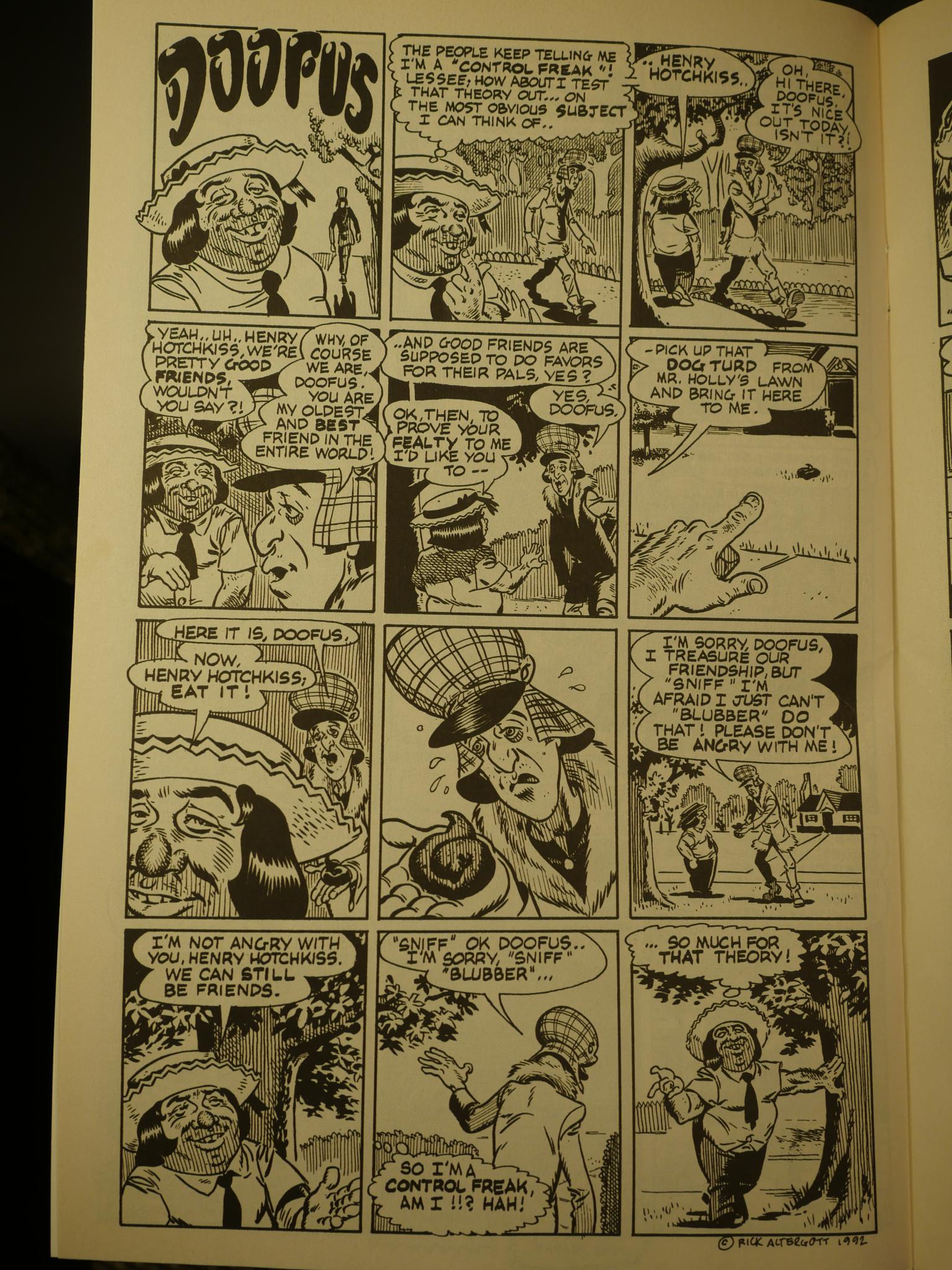 It’s not just the art that I find off-putting, though. I get the joke; I just don’t like it.

OK, I think that’s enough of a hate-fest for a twenty year old comic book that few people have read. I’m starting to feel like I’m abusive or something… 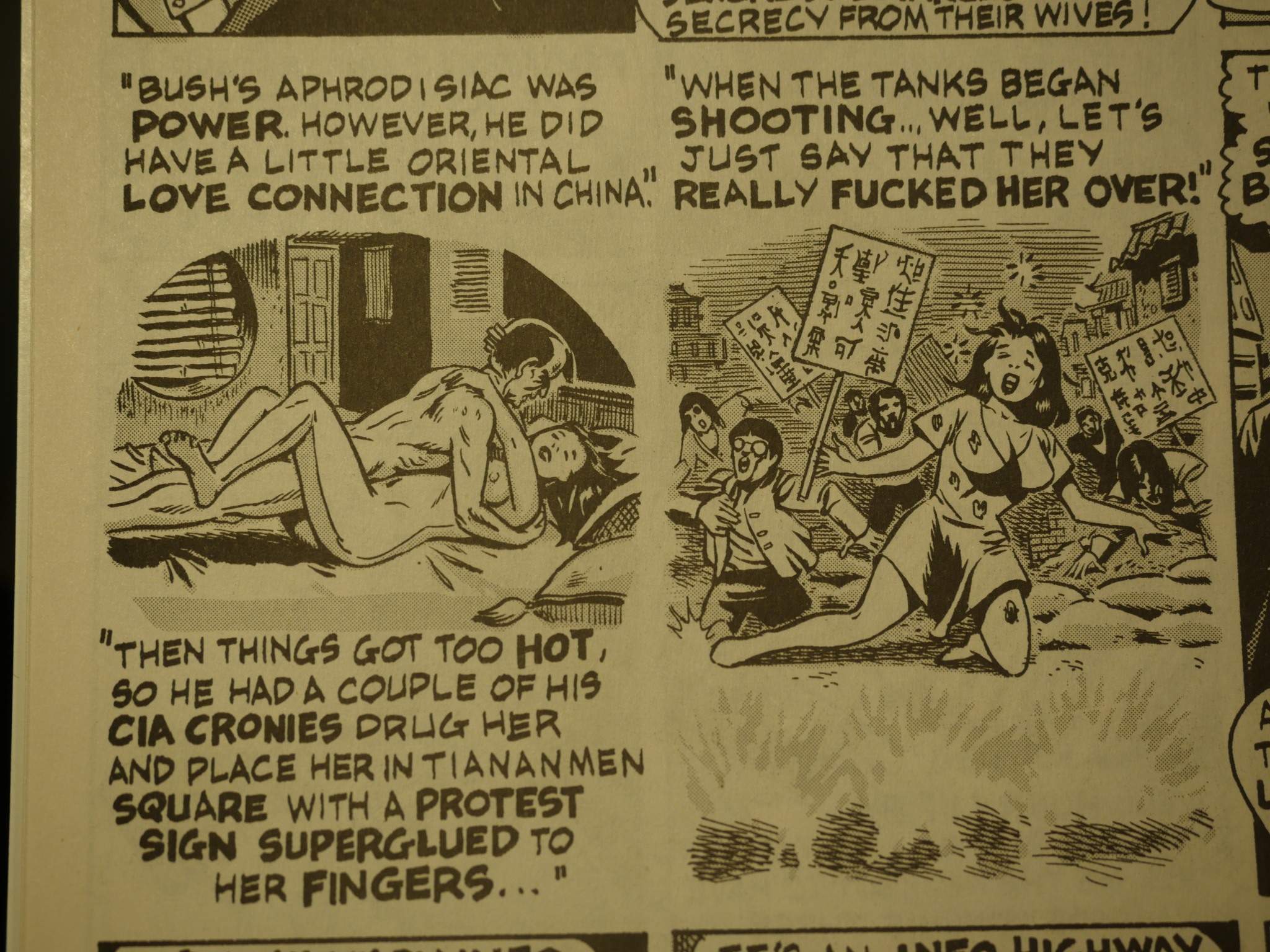 Anyway, most of the first issue isn’t about Doofus at all, but is about, er, some complicated political plot. Much satirical. The second issue, appearing three years after the first one, is mostly Doofus.

Then that was apparently cancelled, because in 2002: 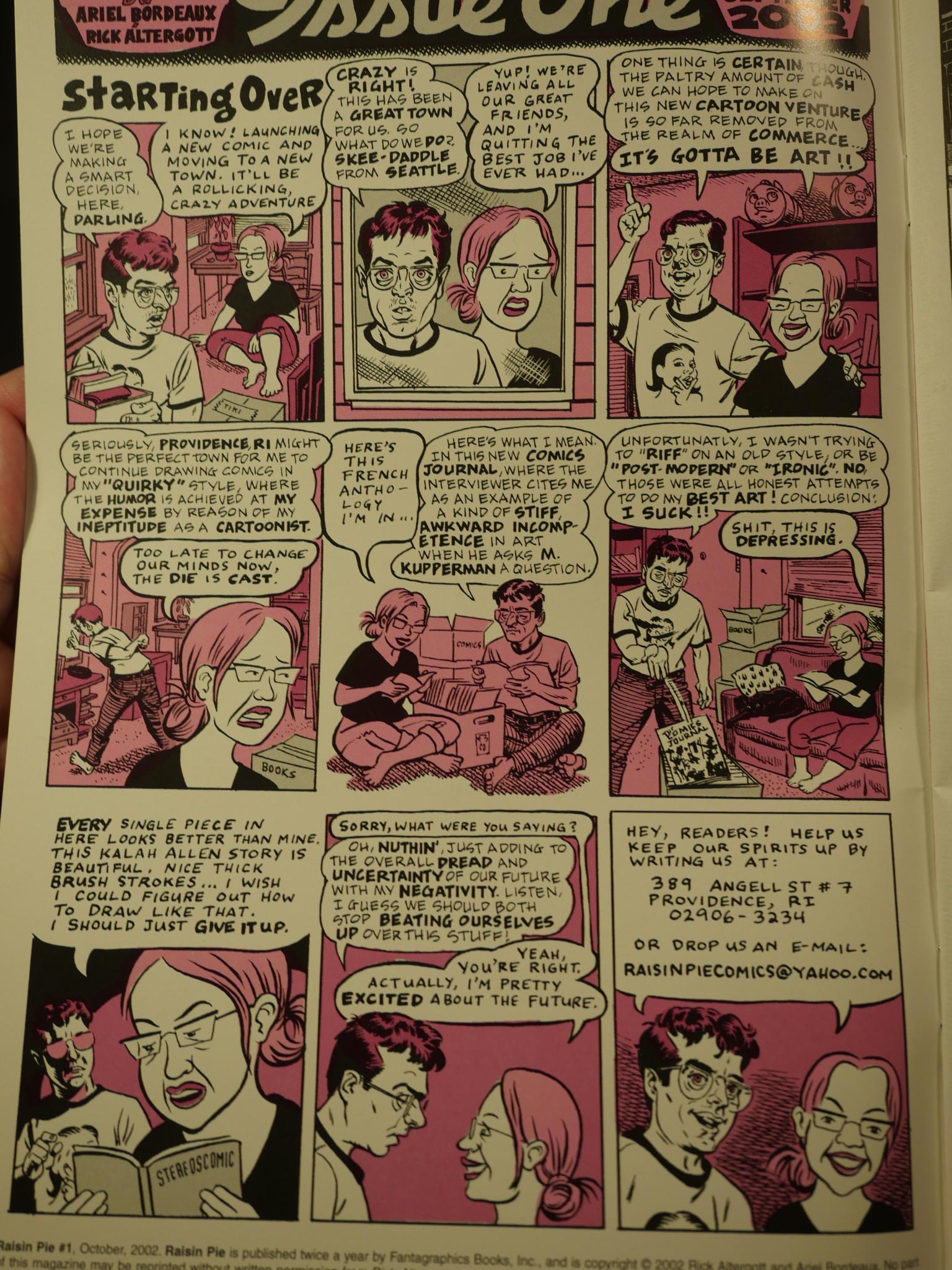 Raisin Pie. A collaboration between Ariel Bordeaux (of Deep Girl fame) and Rick Altergott. They are apparently a couple now, and that’s as good a reason as any to start creating a shared anthology.

They do the occasional collaborations, like the very self critical introduction above, but mostly stick to their own halves of the book. 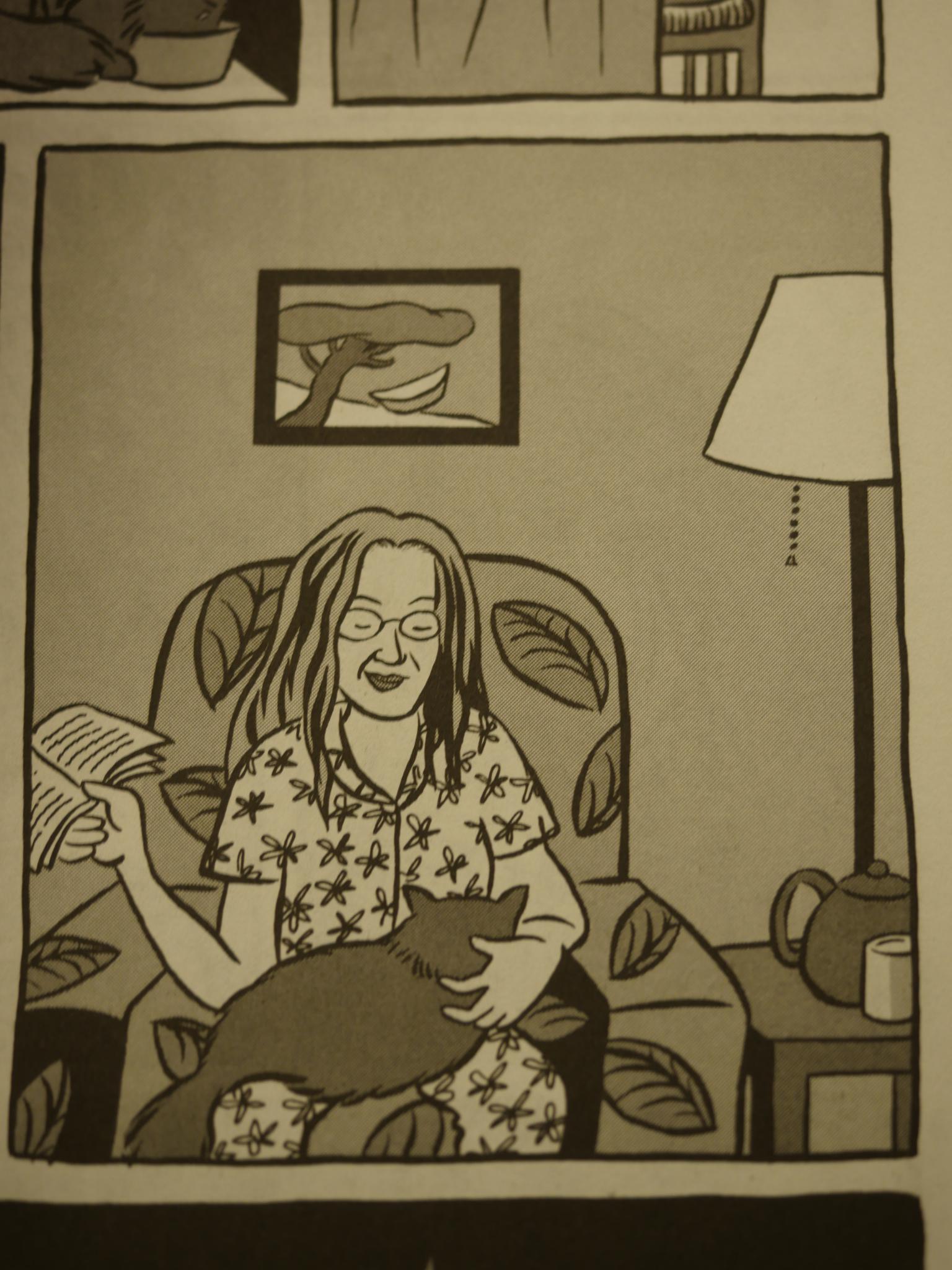 Altergott starts a serial about some drug dealers (where Doofus is tangentially involved), and Bordeaux starts two serials: One about a library that burns down, and one about a girl who hangs out with three nerds.

As you saw in the introduction, Bordeaux is pretty hard on her artwork, but as you also can see here, it’s fine. Some pages look a bit rushed, but there’s also plenty of images like that one above, that are really quite attractive and feel quite real. 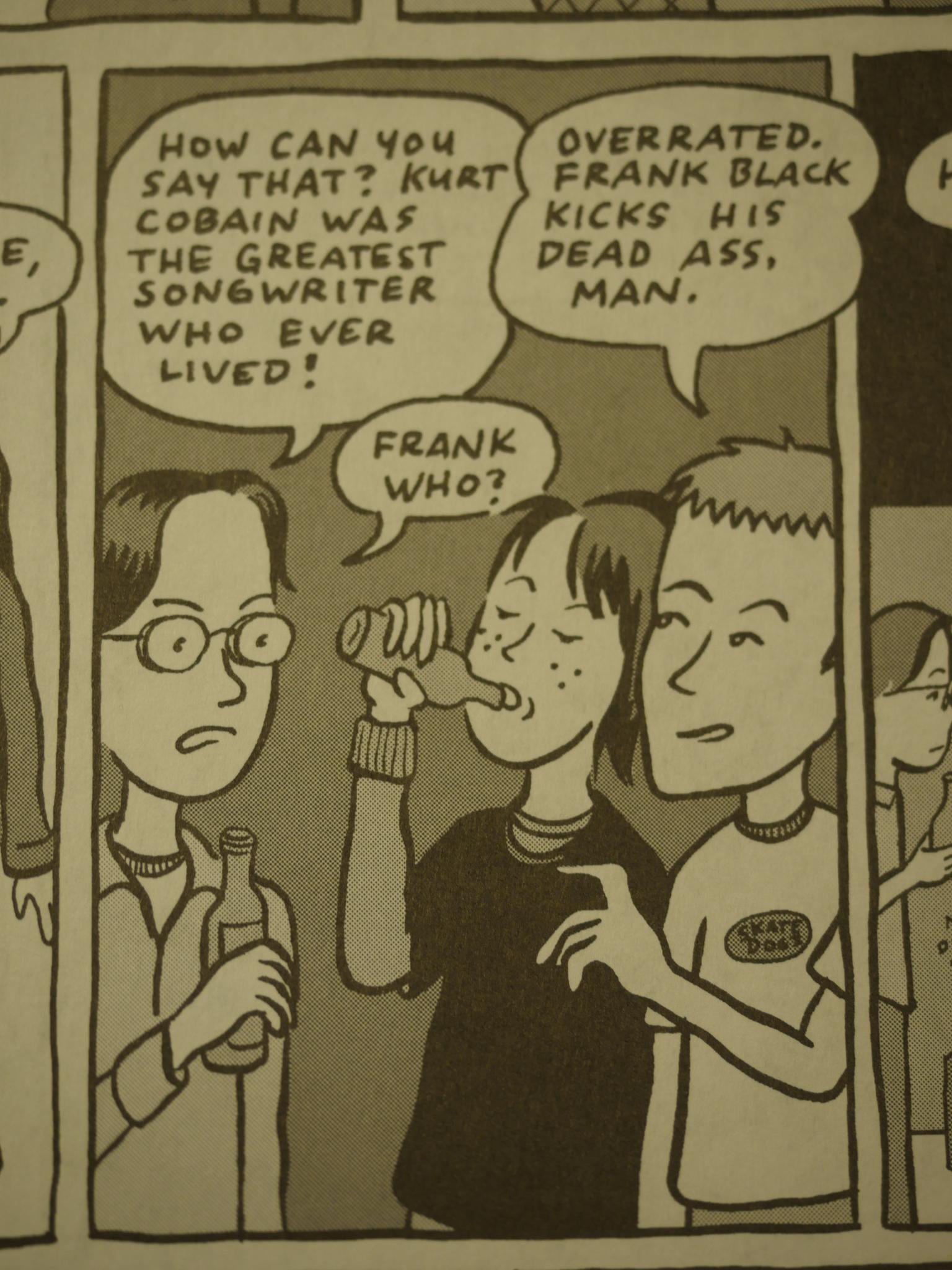 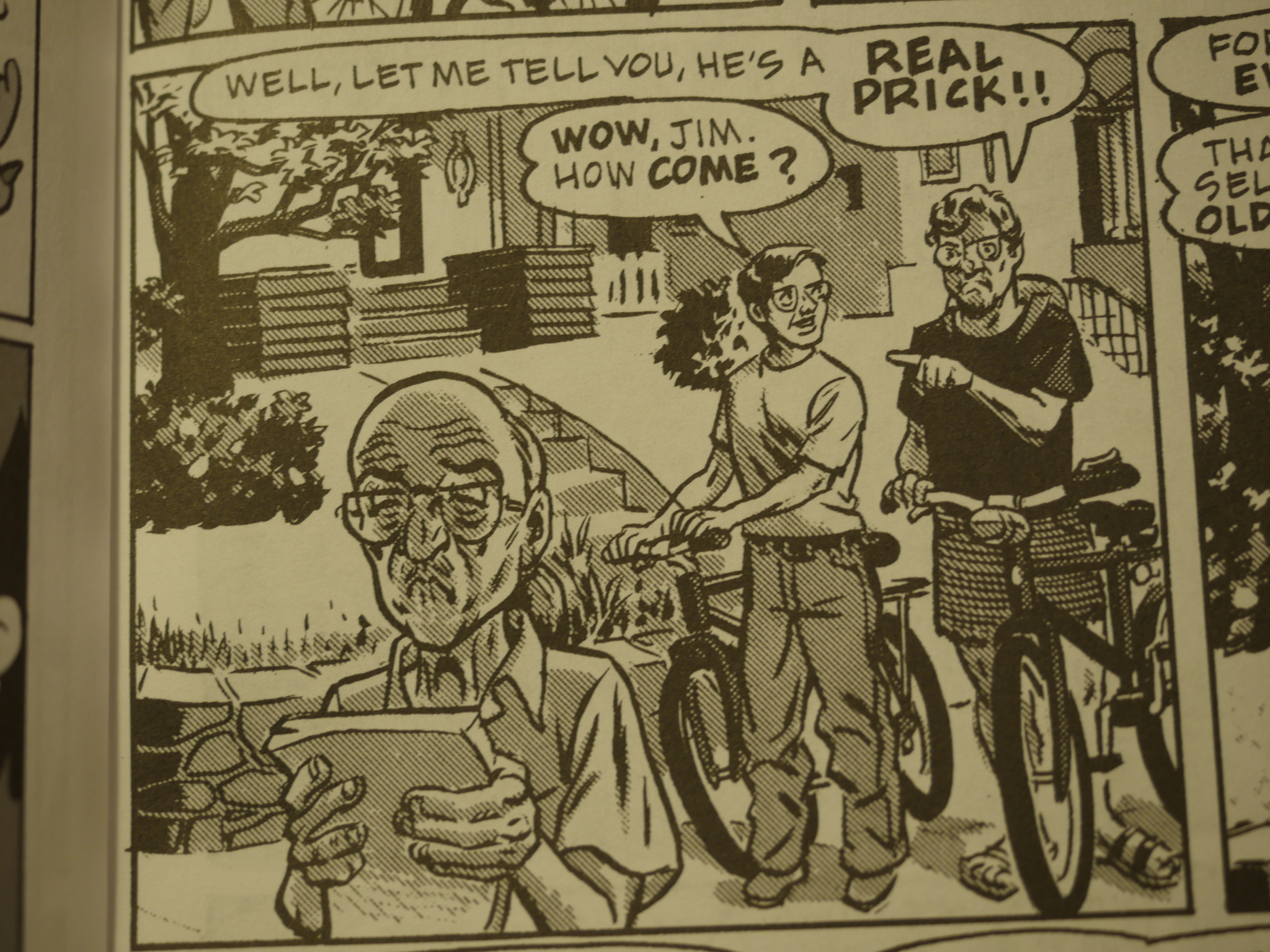 There’s also the occasional stray piece that’s not part of the main serials, like this one where Altergott meets Jim Woodring (who has bad things to say about his neighbour). 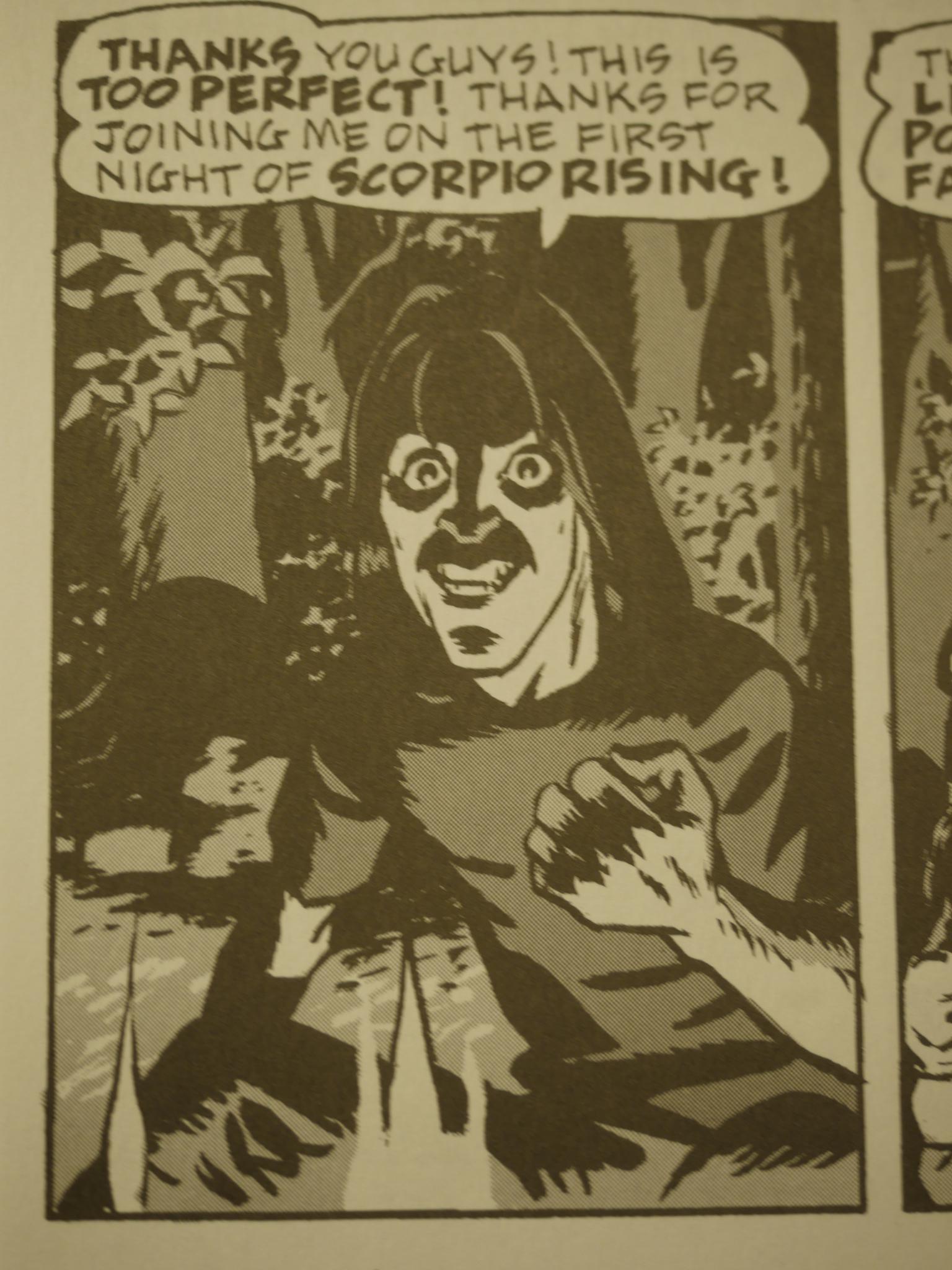 Raisin Pie is slightly oddly printed. It’s on white non-shiny paper, which is nice, but the ink is washed out. Perhaps it wasn’t printed with black ink, but with a very light grey ink? Or perhaps it’s a printing mistake? Over several issues? 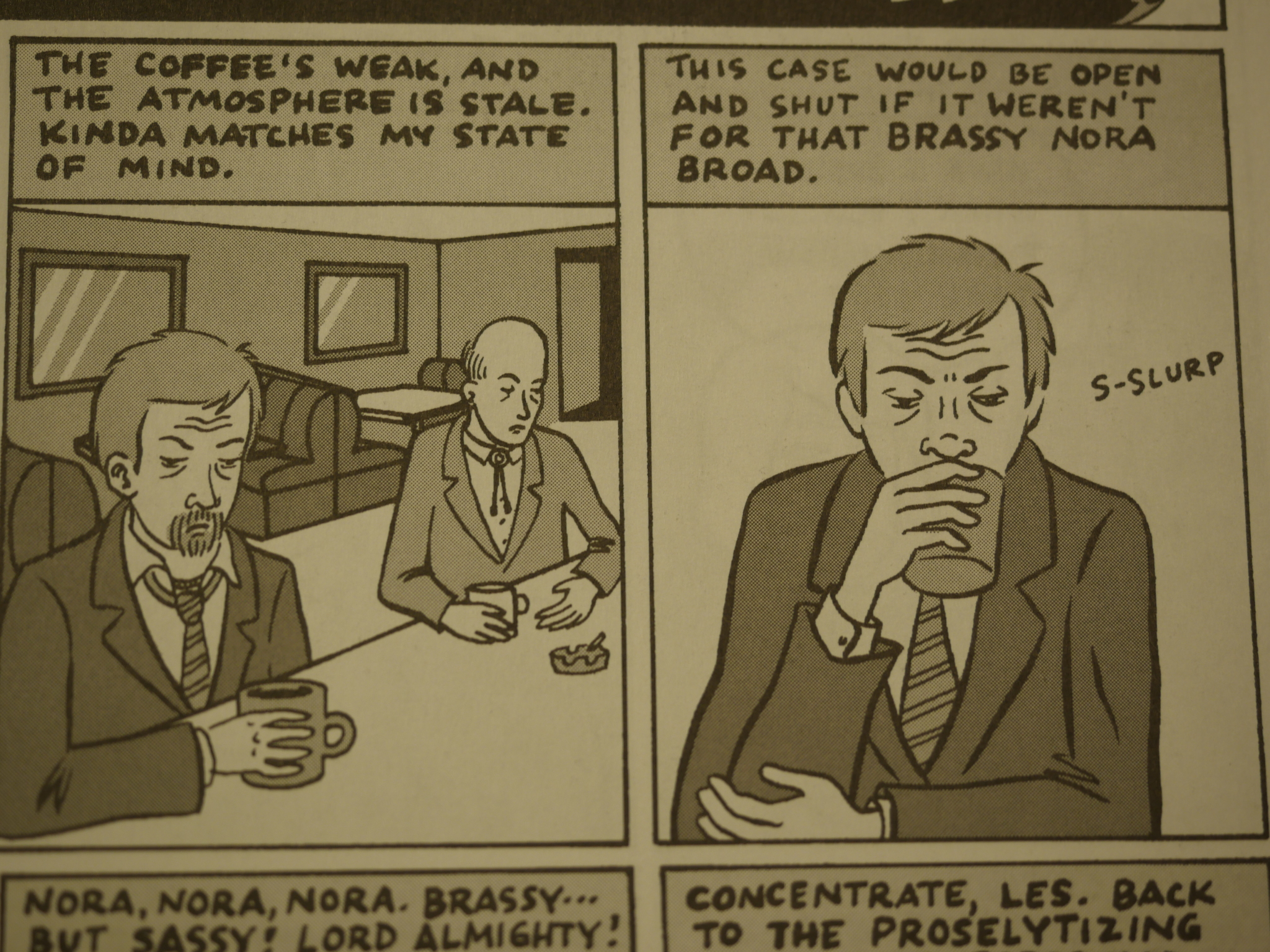 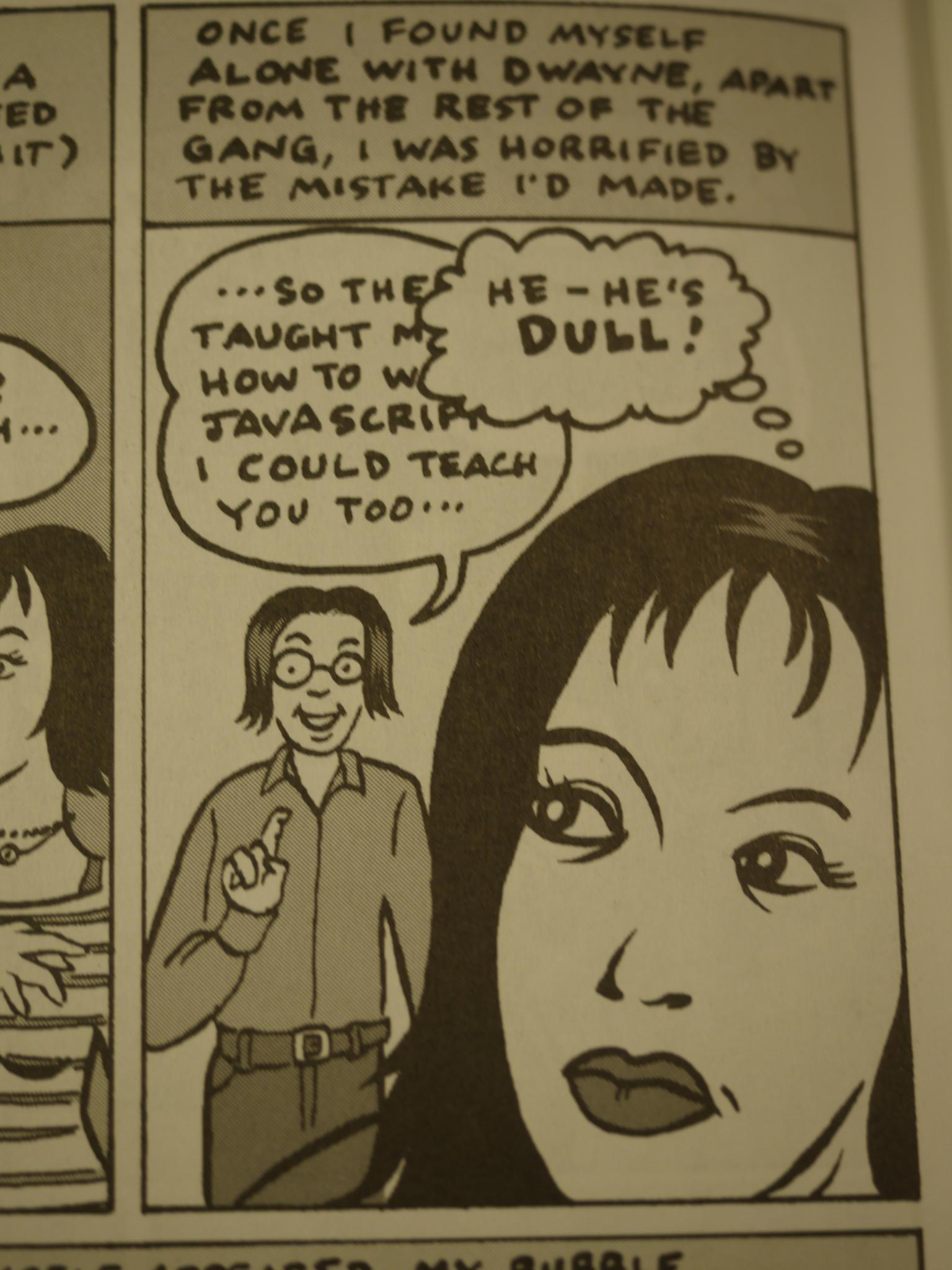 And here we have romance comics. Good lord! *choke* Javascript! 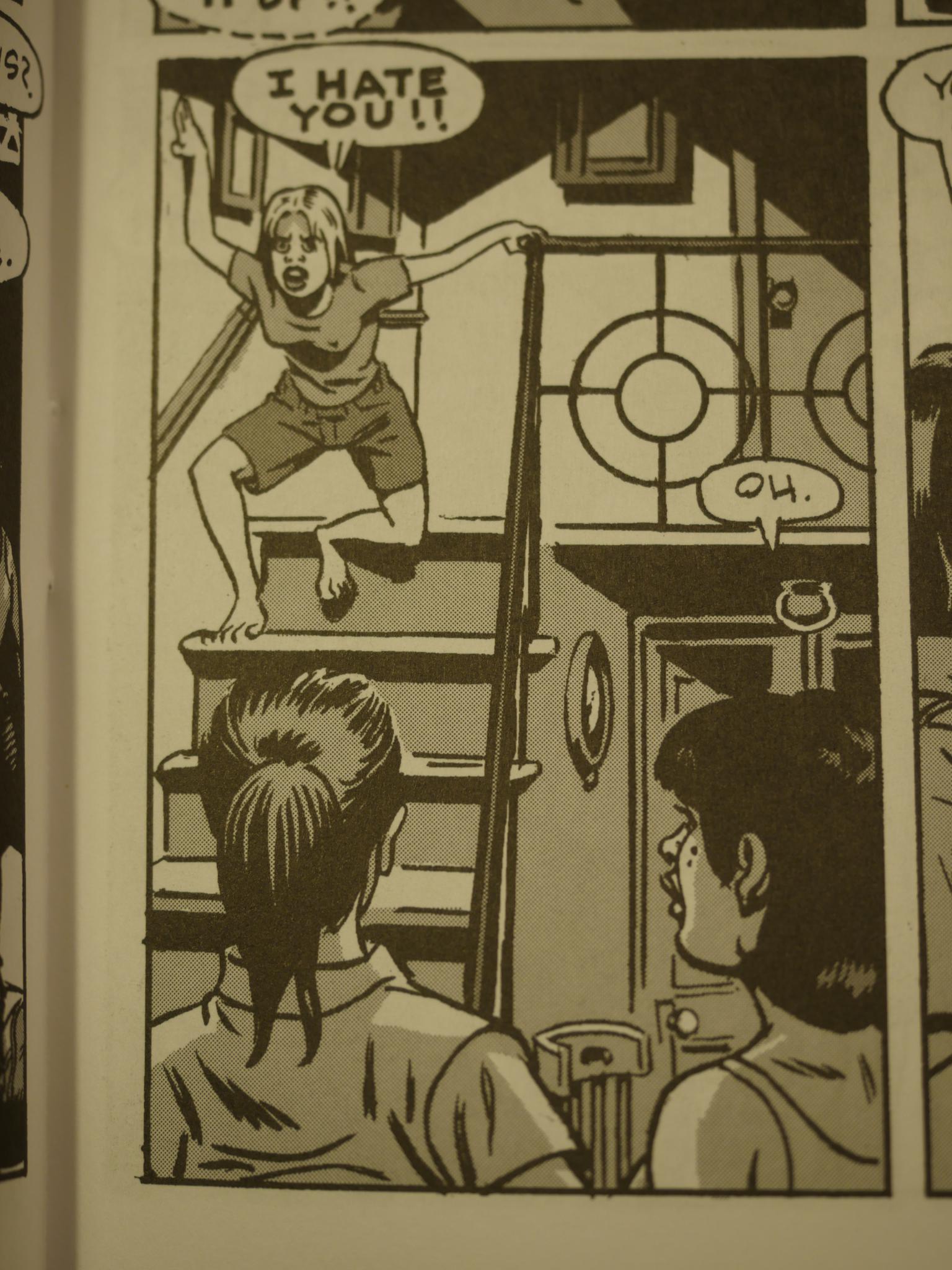 What on Earth is up with the scale of that staircase? Six humongous steps between floors? And is that a girl very… small? Or possibly a monkey?

To atone for my lapse here, I’ll include this: 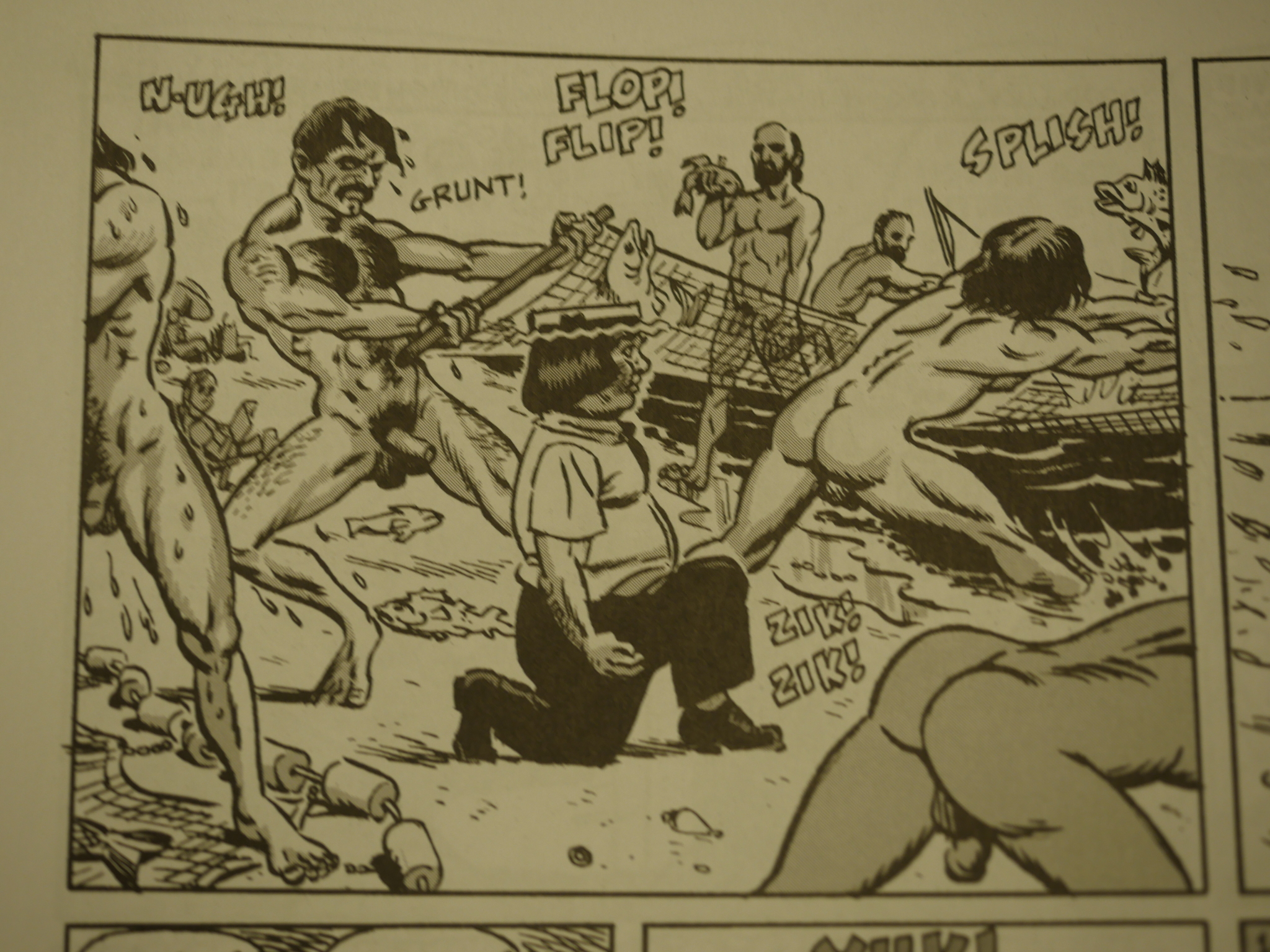 The naked fishermen are really quite an inspired piece of lunacy from Altergott. 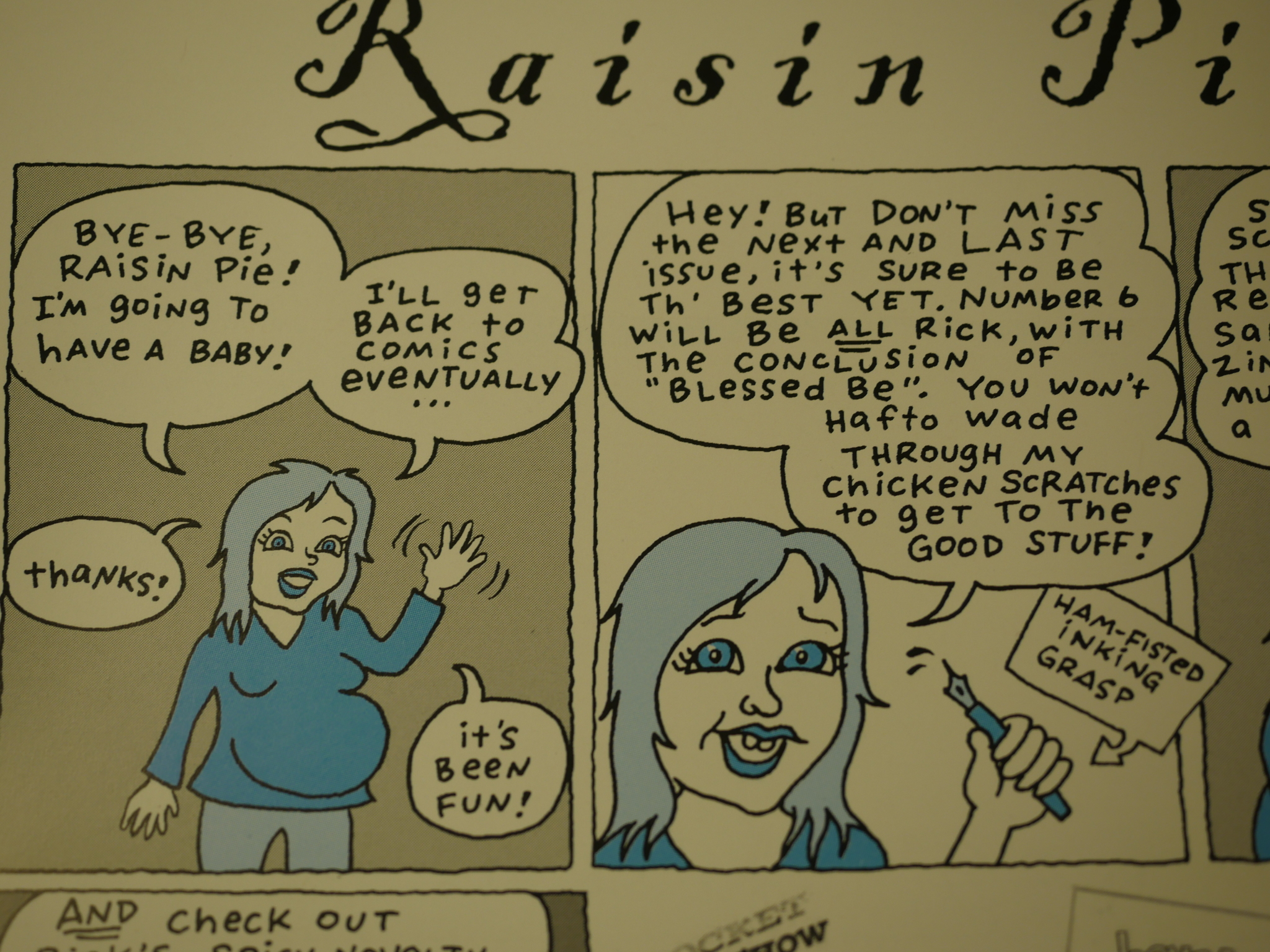 In the fifth issue Bordeaux announces that she’s ending her Raisin Pie contributions (and she does wrap up her two serials quite nicely in this issue), and that Altergott would wrap up his in the next issue. No further issues were published.

Altergott has since published stuff at Vice, but I don’t know what he’s up to these days. I can’t find any publications by Bordeaux since Raisin Pie, but she has a tumblr.