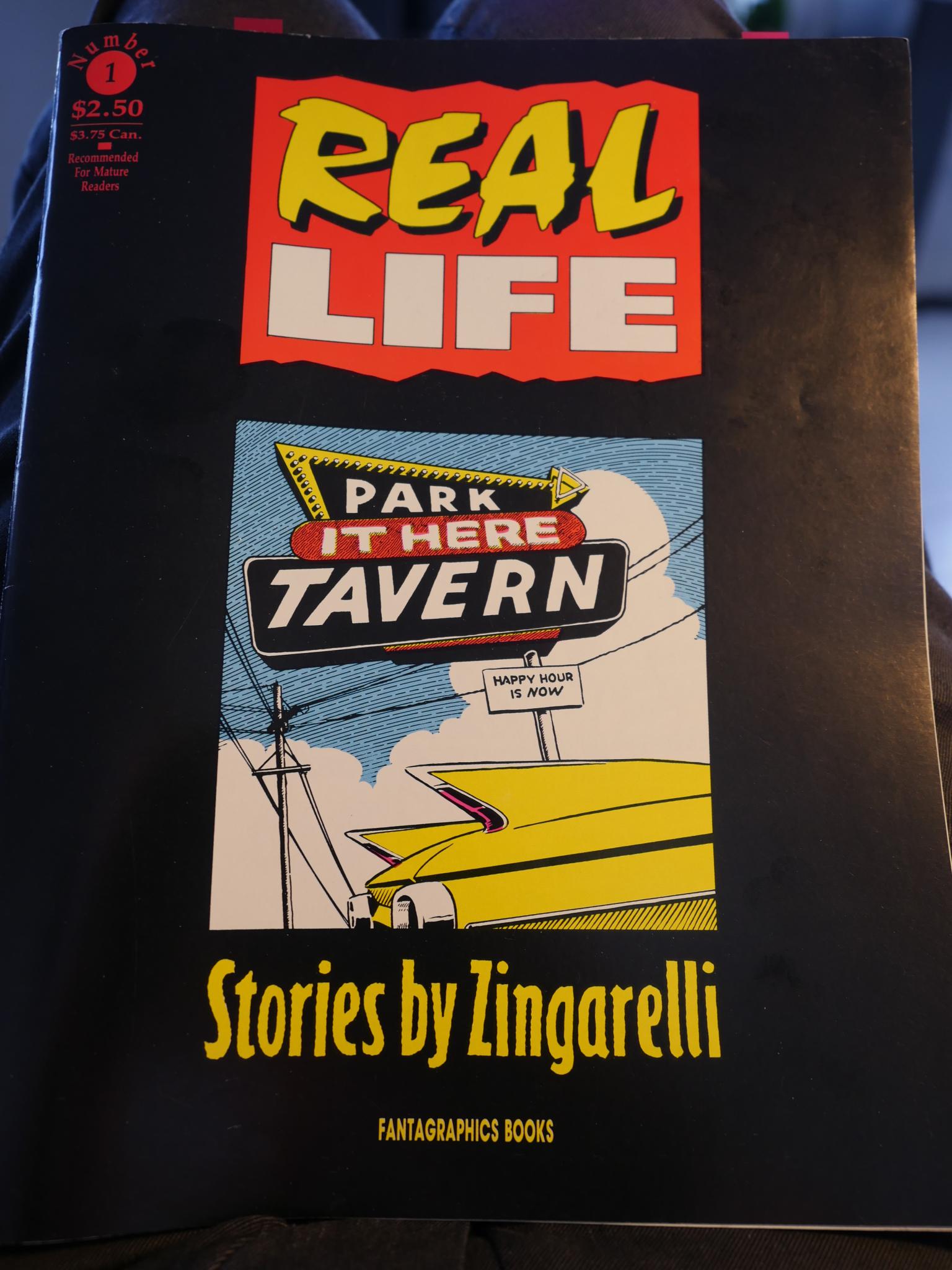 Autobiographical comics are often written by shy introverts (or so the cliché goes), but there’s also a tradition of manly men making the stuff (perhaps beginning with Spain). The most prolific manly man in the field is the writer Dennis Eichhorn. He just writes the stuff and gets a huge variety of artists to illustrate his fun and sometimes horrific stories.

Mark Zingarelli is one of them, and this is his solo book. (Sort of. Eichhorn writes one of the stories within.) Which might explain the logo, which uses the same font for the first word as Eichhorn’s book Real Stuff.) 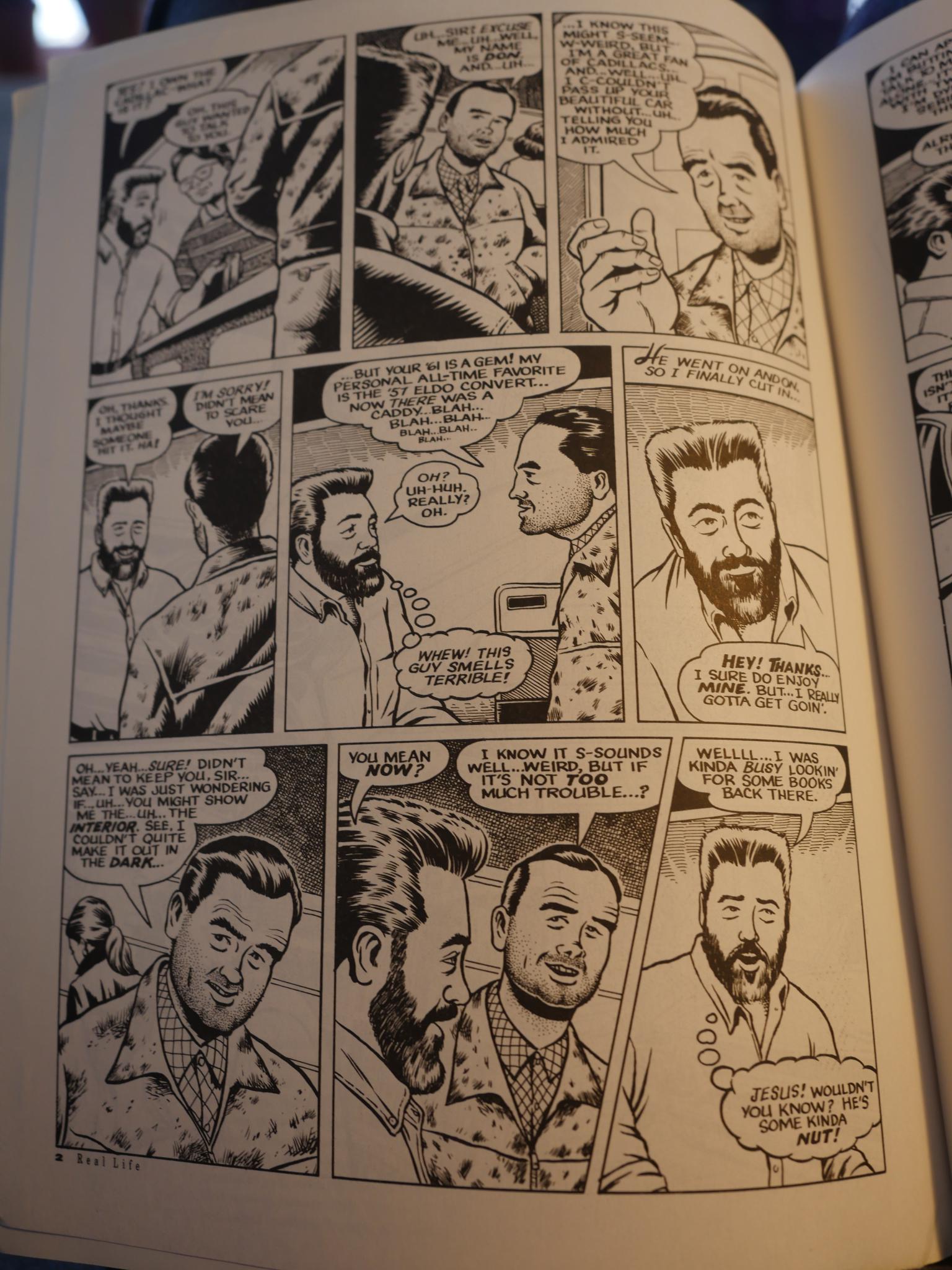 And the first story is very much in the Eichhorn tradition, although with less drugs. It’s about meeting a very strange guy who’s extremely interested in Zingarelli’s Cadillac. What do you do? Brush him off or put up with it?

Zingarelli seems like a nice guy, so he does. The story ends with “not quite the end”, so I’m assuming this was to be continued in issue two, which was never published.

Which is too bad, because it’s a terrific story, and the strongest one in the issue. 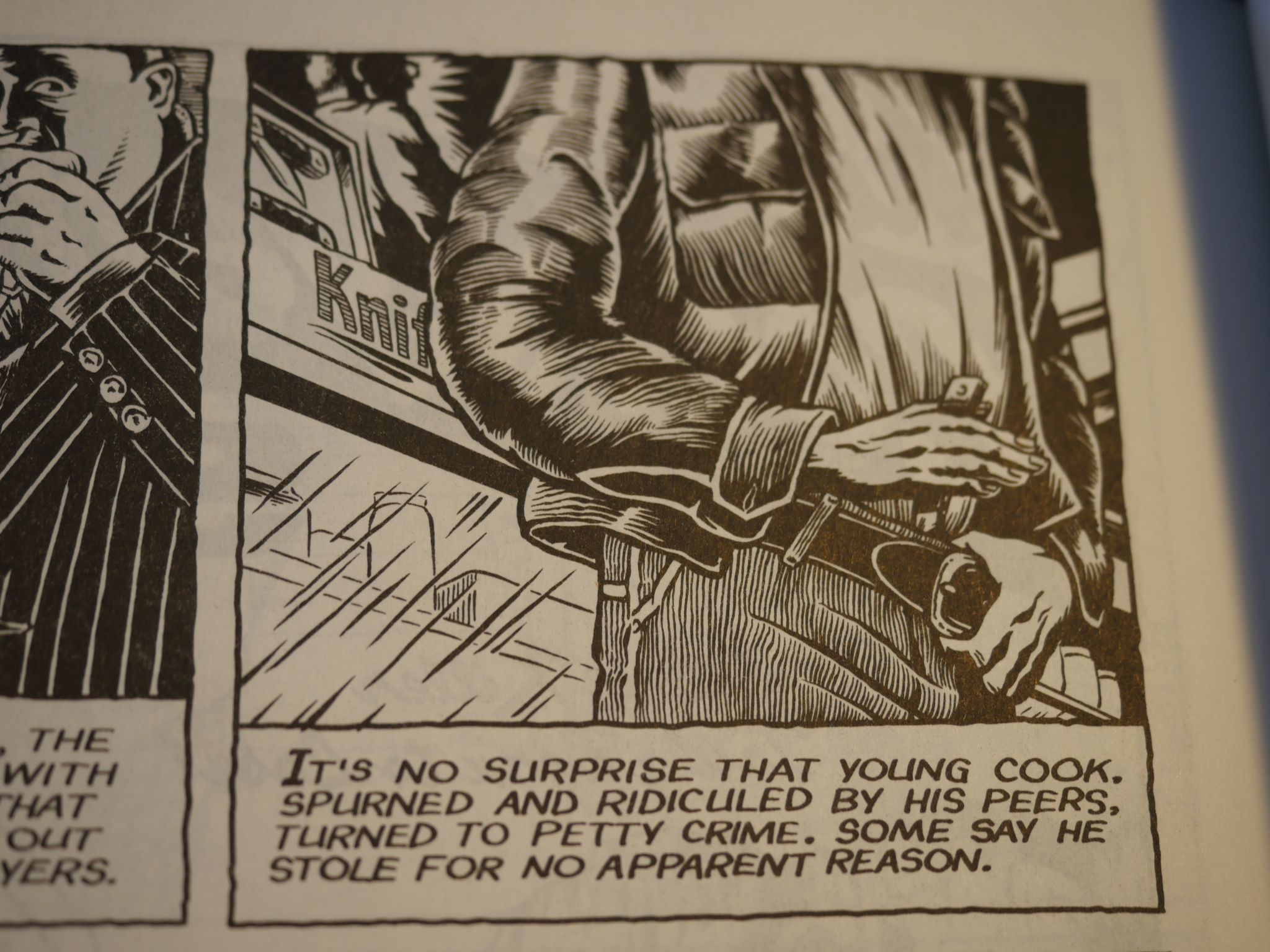 The rest of the book consists of a true crime tale, two stories about the electric chair, an urban legend, and the aforementioned Eichhorn tale about almost hooking up with a serial killer hooker. (Yes.)

Oh, and a tale about a neighbourhood butcher. Which is also pretty good. 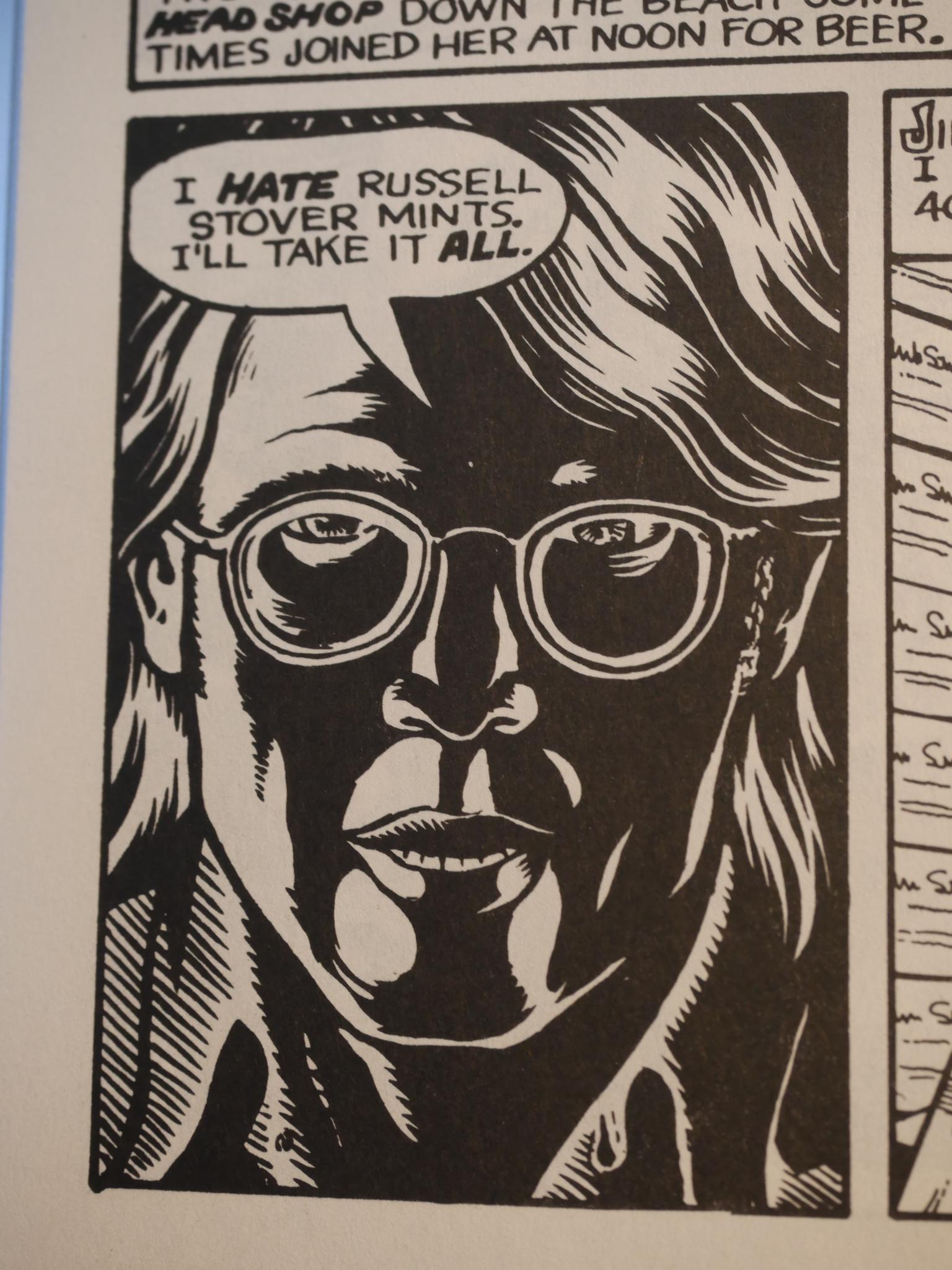 Oh, the art: It varies quite a lot, from the exceedingly straightforward approach in the first story (almost American Splendorish) to the more oblique off-centre look in the true crime one, to the, er, chiaroscuro? of the Eichhorn tale. So I’d say Zingarelli was trying out various styles in this book, but it’s all looks pretty good, even if proportions are sometimes a bit off. 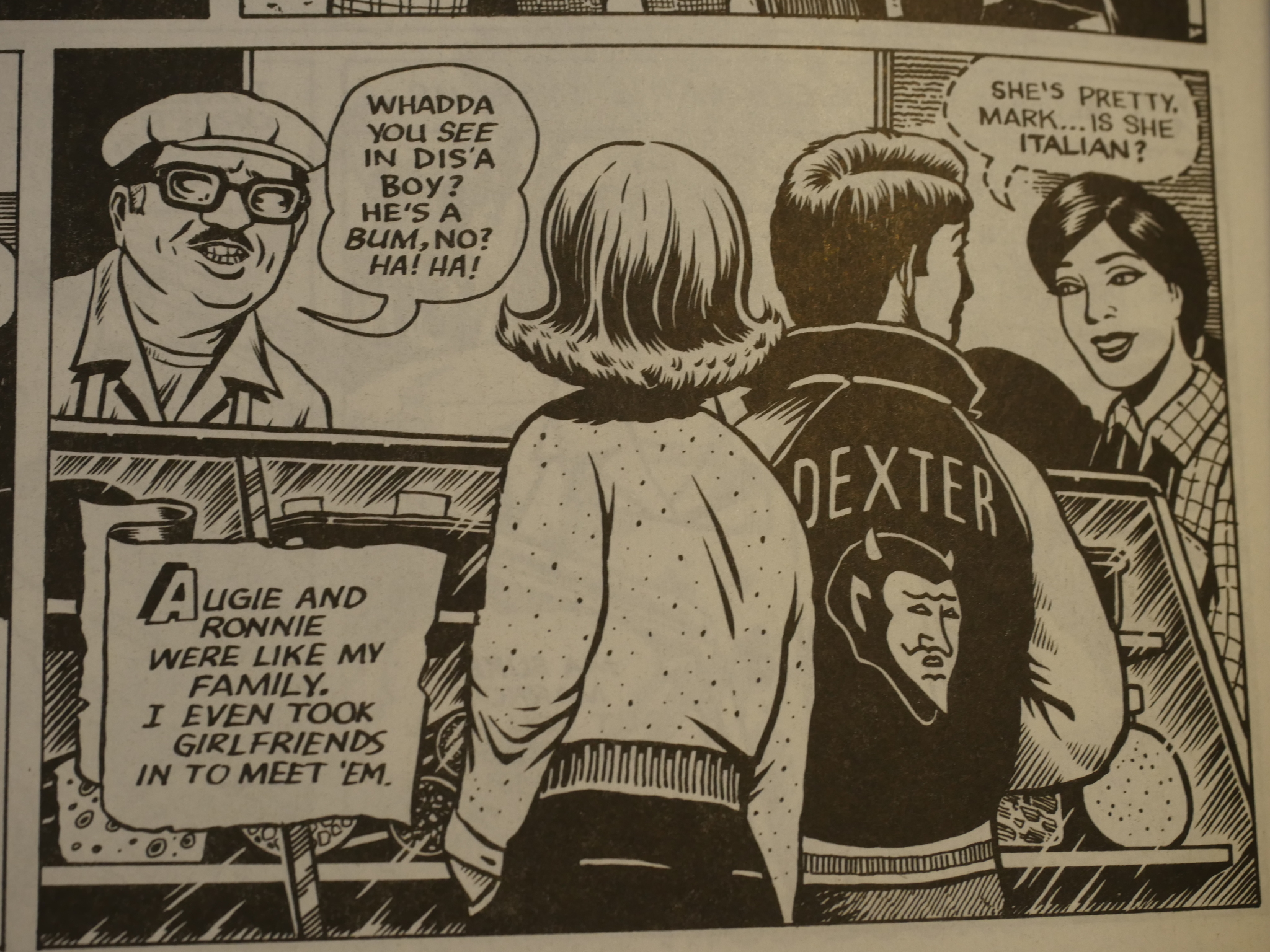 Zingarelli has done a wide variety of illustration work after this, but not all that much work in comics, as far as I can tell. But he recently published a new book written by Joyce Brabner, which I didn’t know about until I binged him now. And now I’ve bought the book. Funny how these things work out.