The Nimrod #1-7 by Lewis Trondheim. 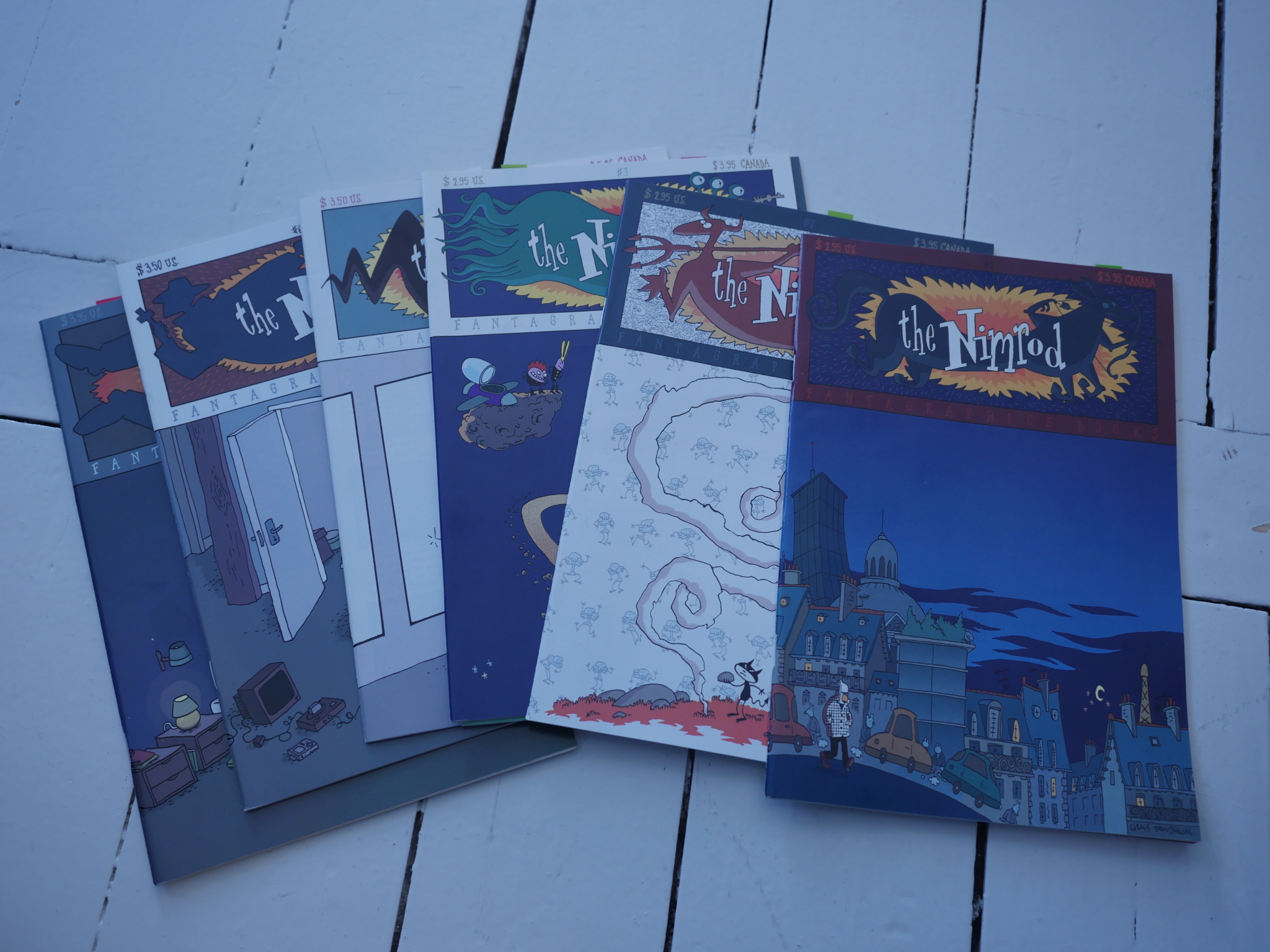 This series is a collection of various of the more “indie” Trondheim works: Autobio, a McConey story, and several shorter pieces, so I can see why it looked like it might make sense to publish this stuff in English in pamphlet format. It’s like US indie comics, so publishing it floppily would be popular? 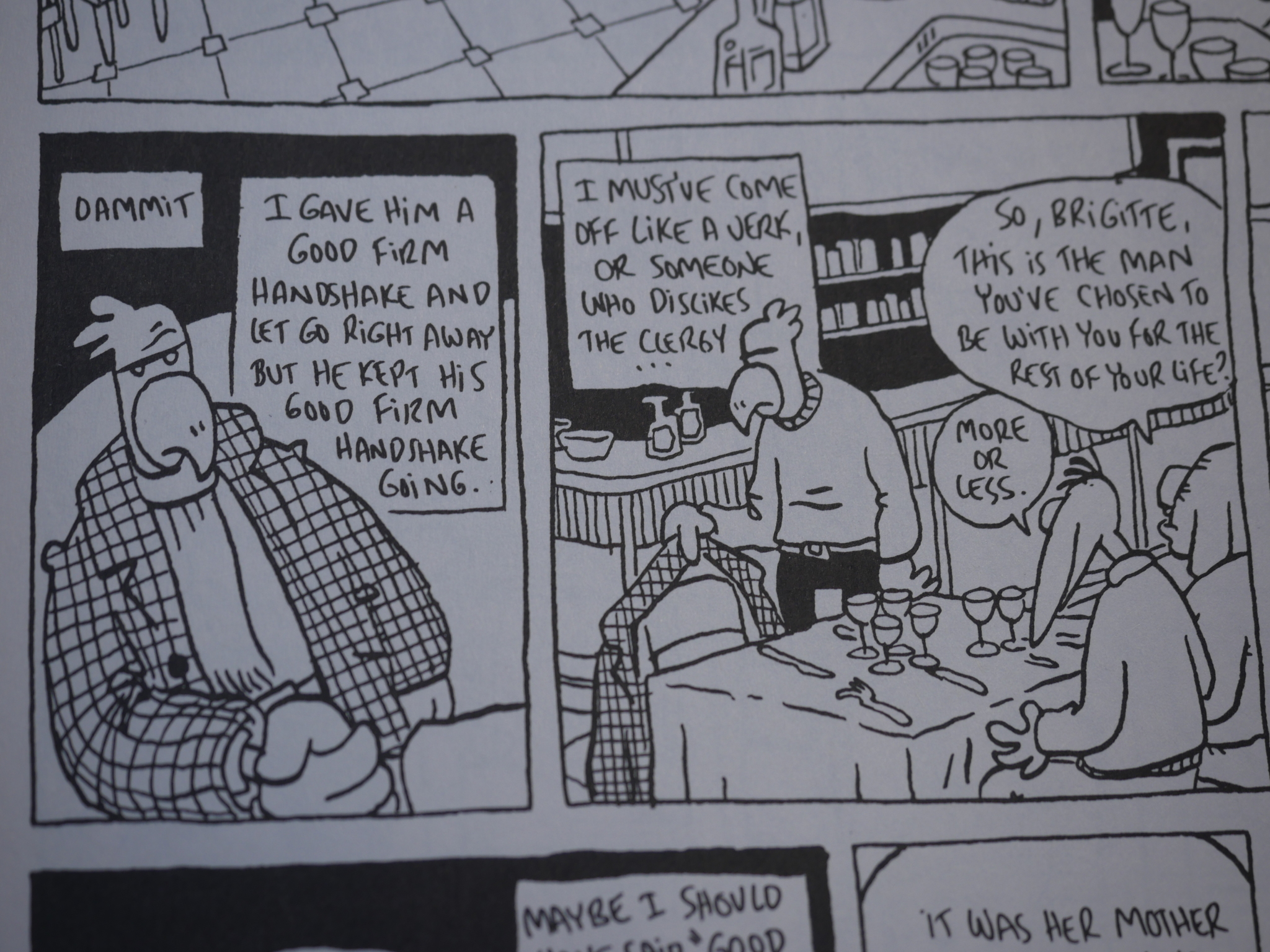 The autobio work usually has an internal monologue running through it where Trondheim thinks a lot about whether he’s an asshole or not. Or comes off like an asshole. It’s fun. 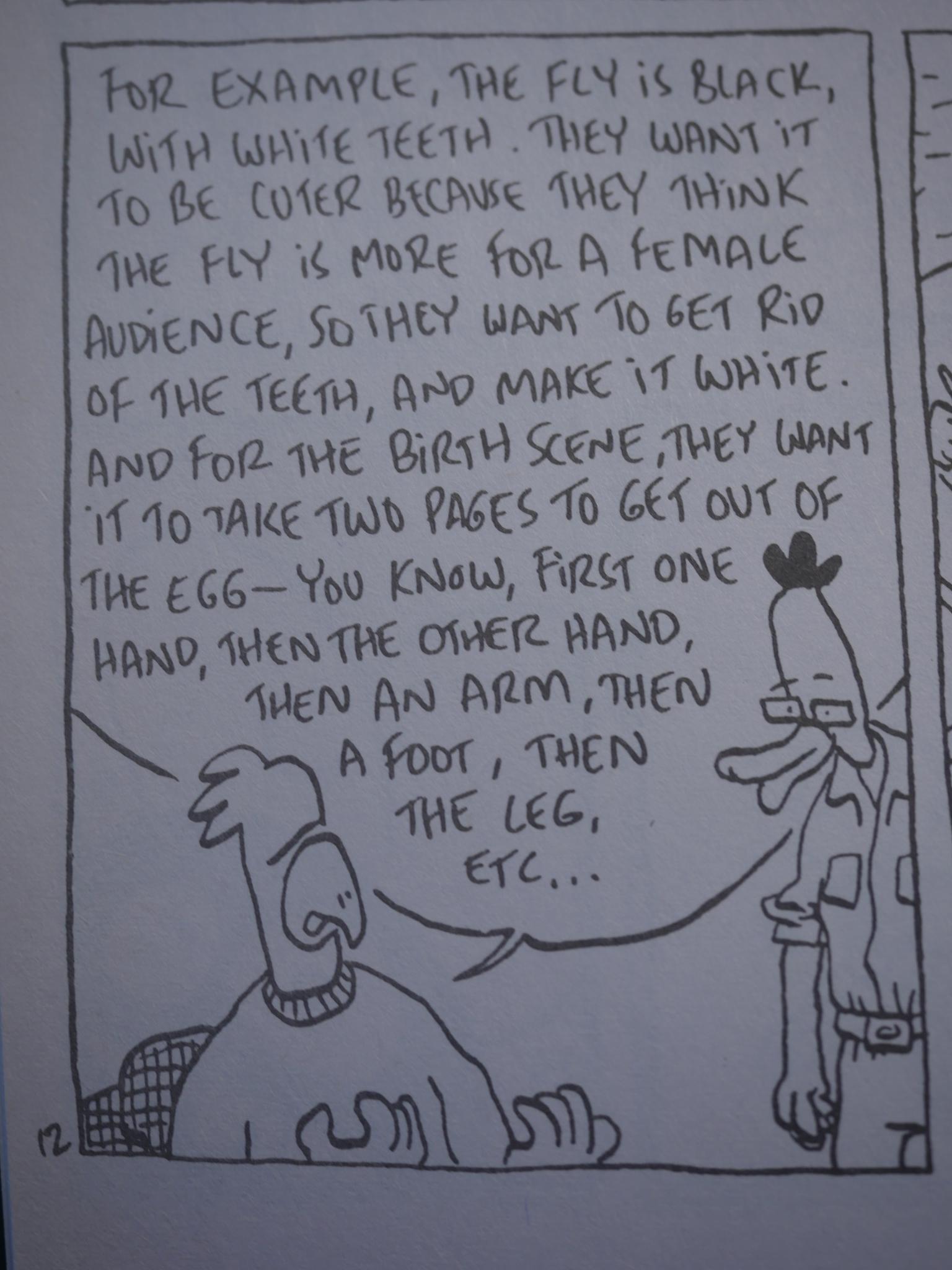 And since he draws comics, a significant part of the stories deals with, well, drawing comics. Here he recounts the changes the editors at Kodansha (I think) wants to have made to the Japanese version of “The Fly”. And I think this speaks volumes as to why mainstream Japanese comics are so dreadfully boring. Editorial micro-managing seems to be the order of the day there, and that seldom leads to anything resembling art. 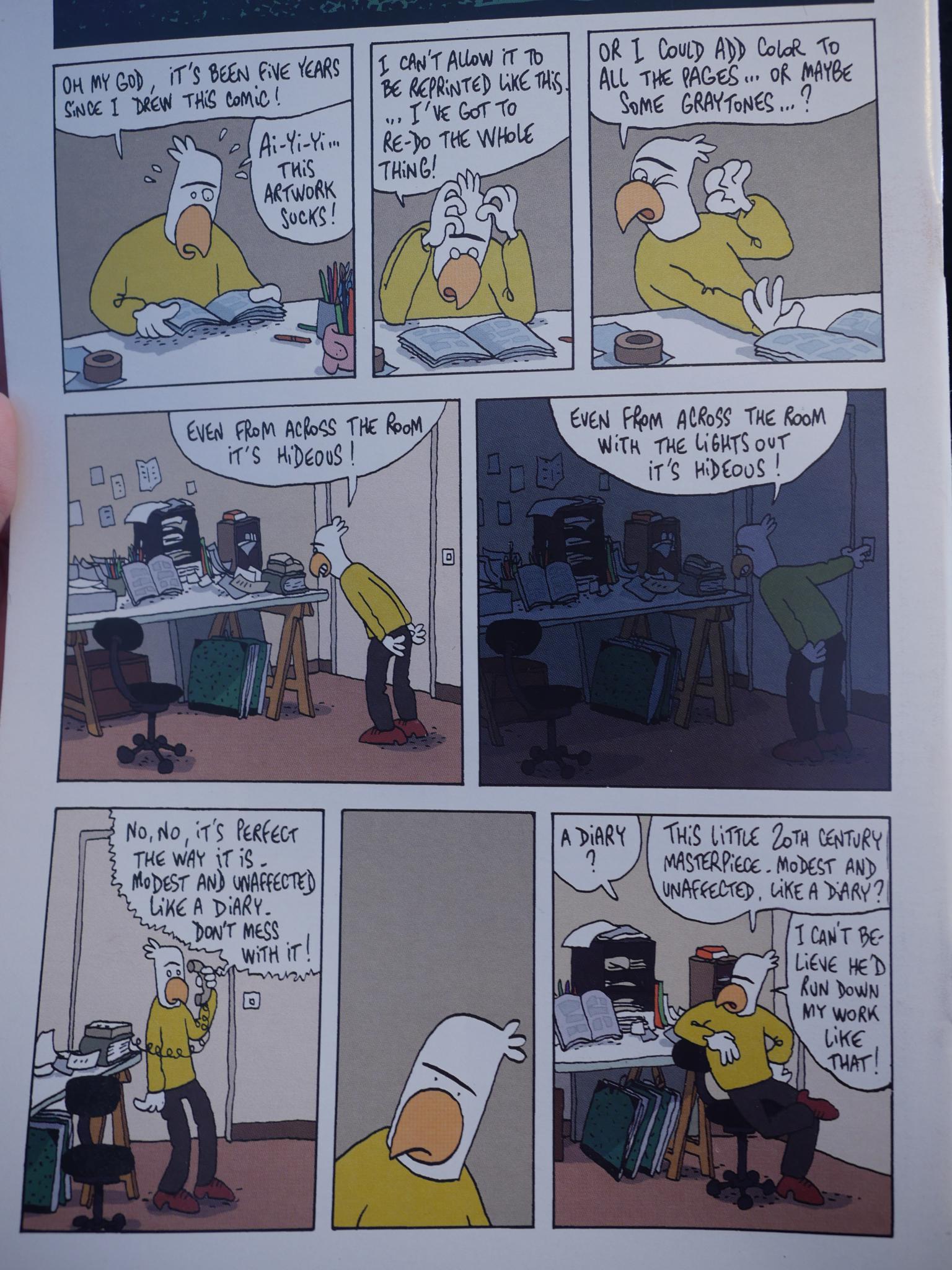 OK, it’s a pretty simple joke, but I just absolutely adore (and laughed out loud) to the middle tier there. 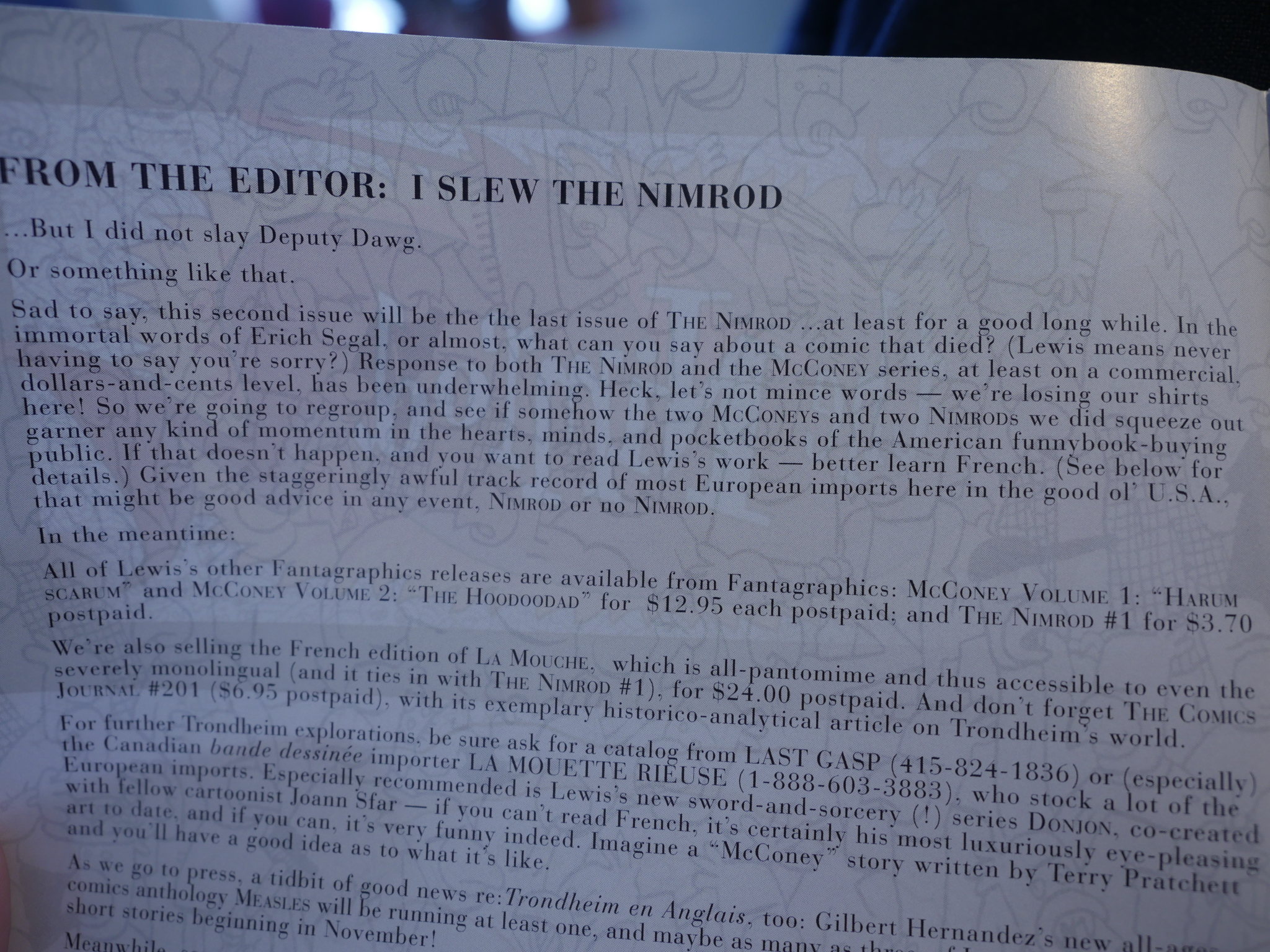 In issue two, editor Kim Thompson (in his usual frank way) announces that The Nimrod is cancelled due to awful sales. So the “indie comic” publishing strategy failed for this material. 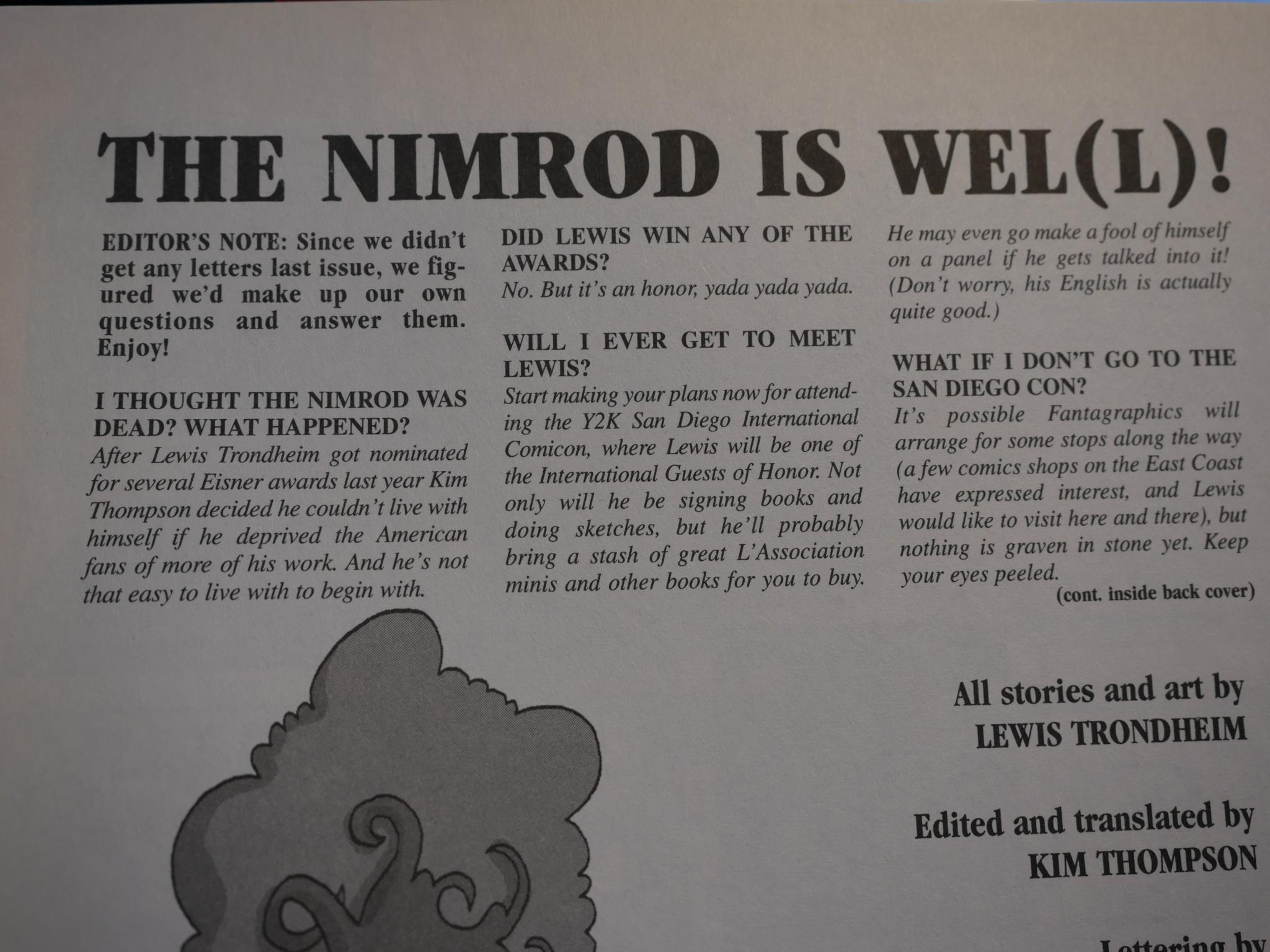 But then a third issue appears a year later. Thompson explains that he just had to publish it, even if it loses money because it was nominated for awards, and he just had to. 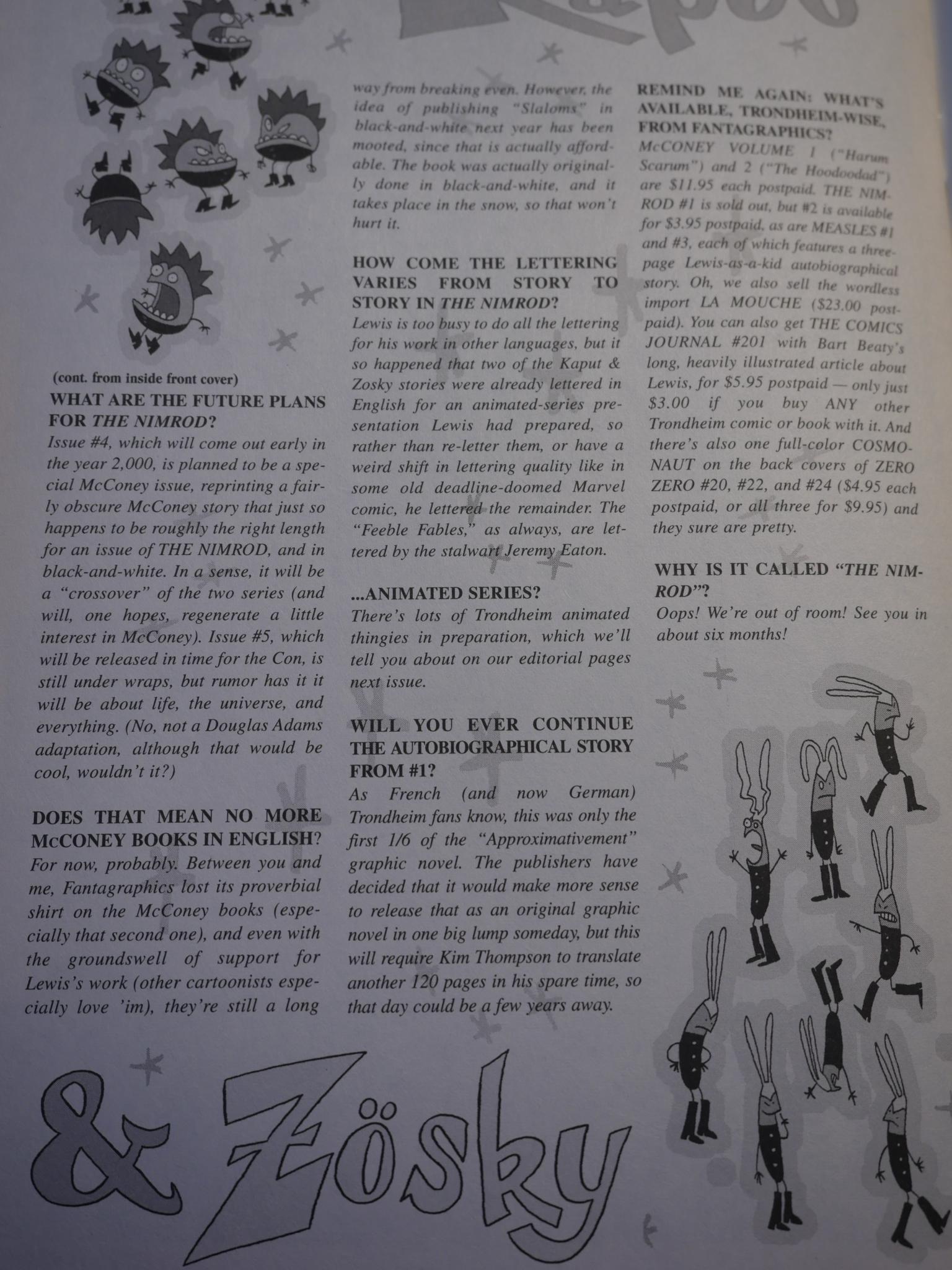 The two McConey albums (in colour, and hardback, I seem to recall) didn’t sell either, apparently. Thompson’s doesn’t whine about it or issue a call to arms, but seems pretty much resigned to publishing Trondheim at a loss. Which is admirable, although it would perhaps be preferable to find a different public to sell this stuff to… 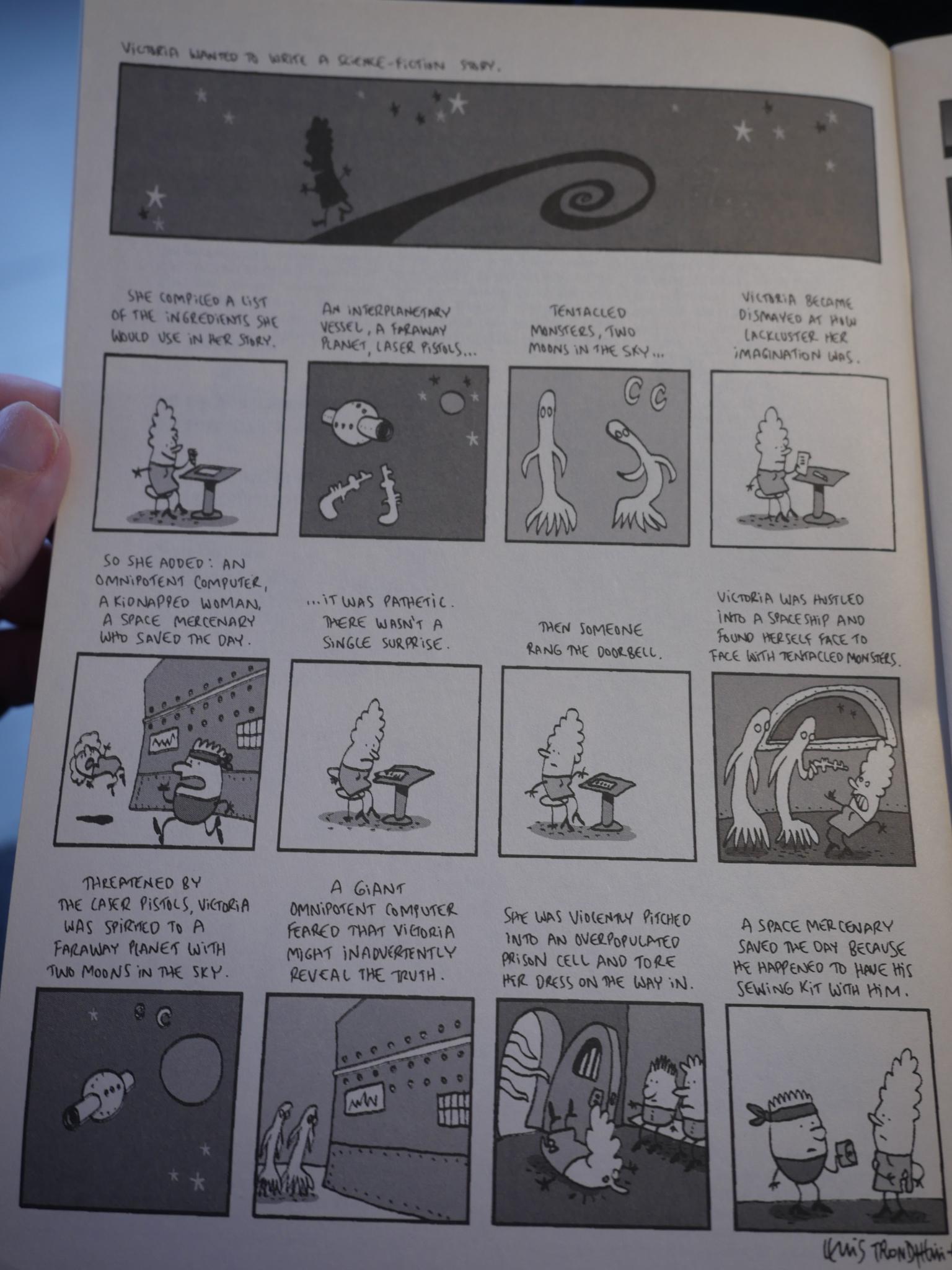 But back to the work itself. The other major mode (other than the autobio) in this series are these pages. They all have pretty much the same arrangement: Square panels with very cartooney characters, and captions above the panels. Some of them are funny (like this one), but others drag a bit. I don’t feel that this form is particularly gripping, I guess… 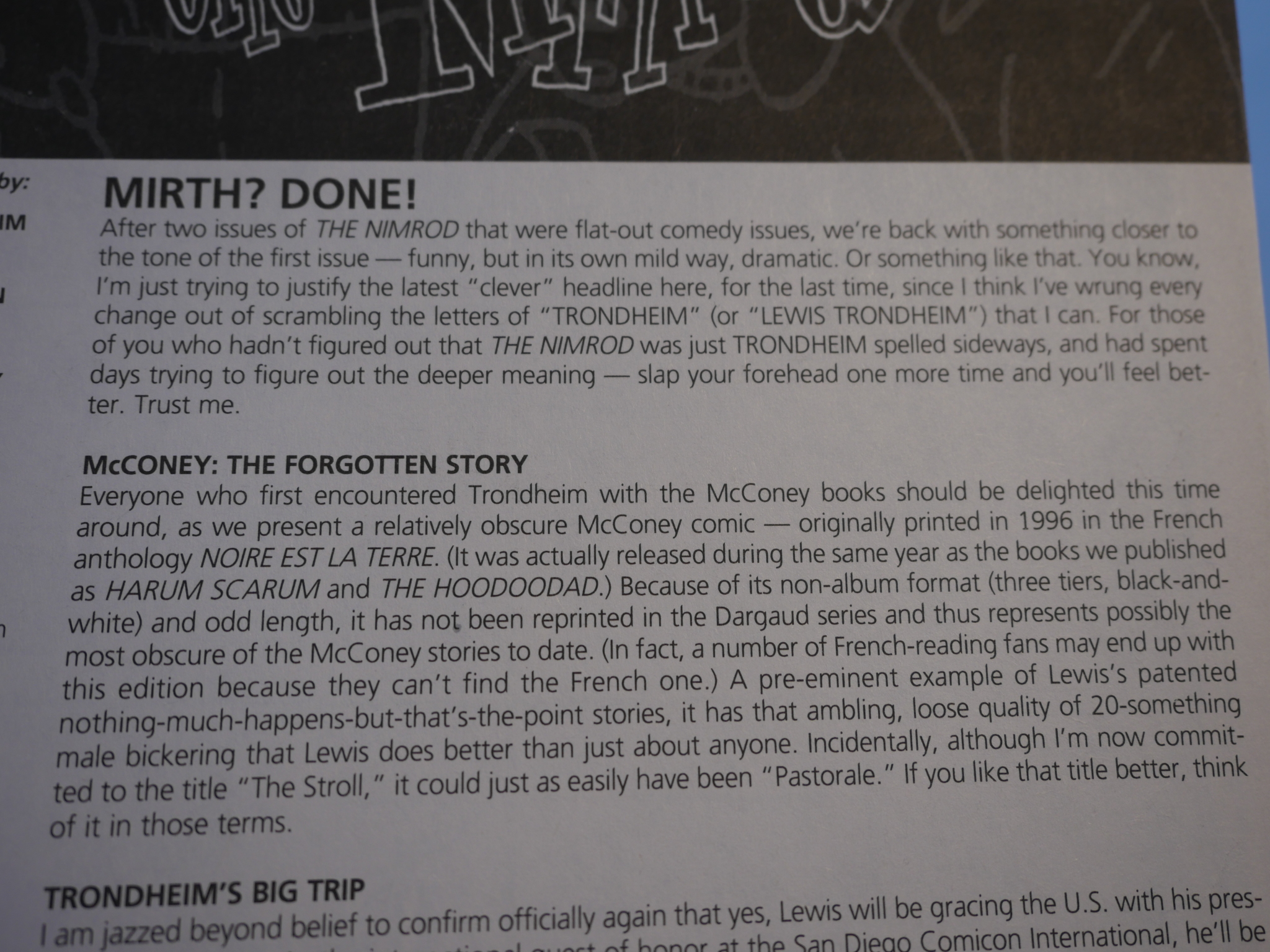 After teasing the meaning of the title “The Nimrod” for a couple of issues, Thompson finally spills the beans in issue four. I didn’t guess that that was what it meant… or… non-meant… 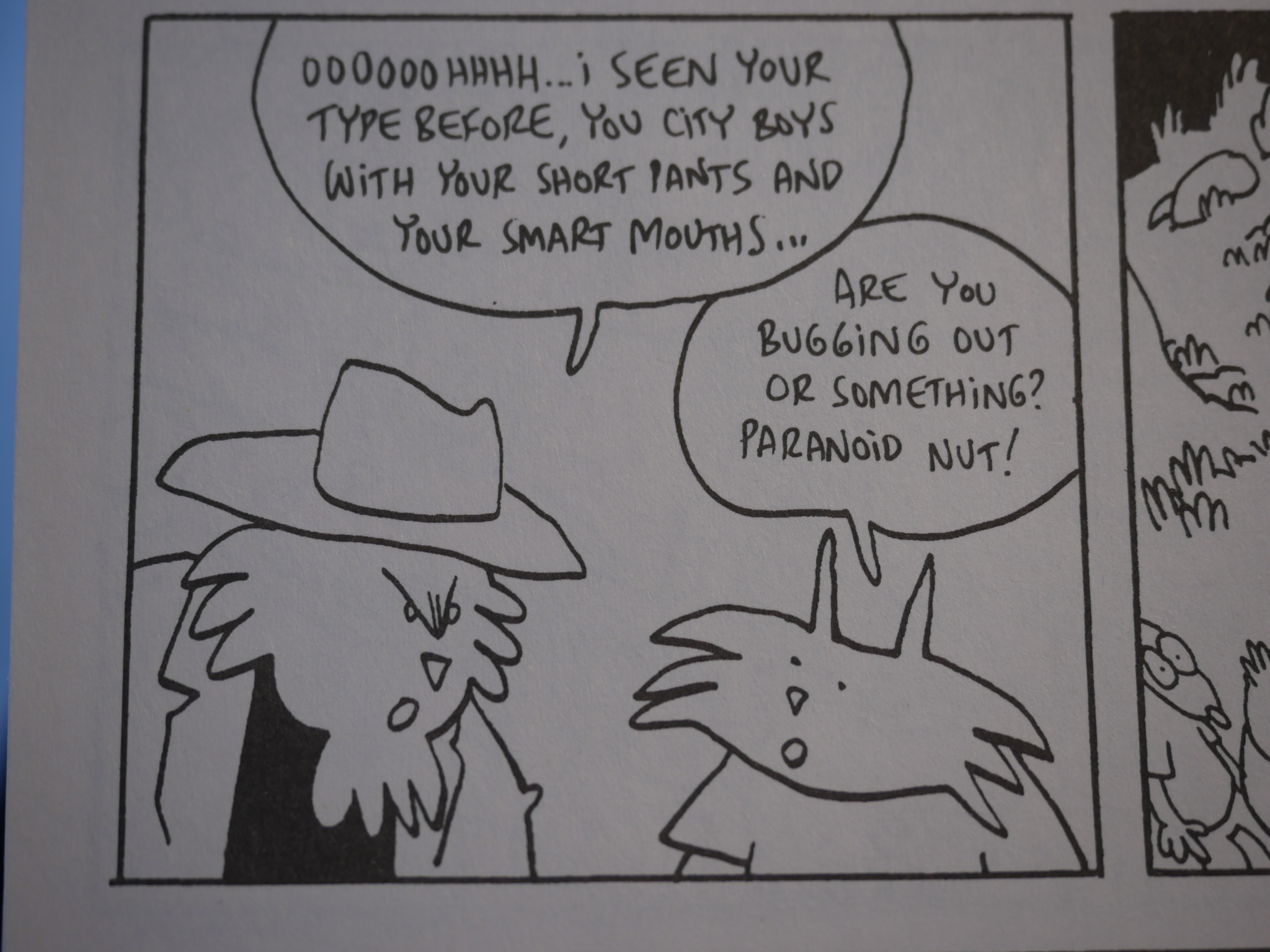 The issue has a longer McConey story, which is the usual four-guys-bickering while nothing much happens. And it’s great. There’s something so completely real about the way they talk to each other, and while it doesn’t seem to have an overt artificial structure, it all comes together to form a whole anyway. Trondheim is just so good at this type of thing. 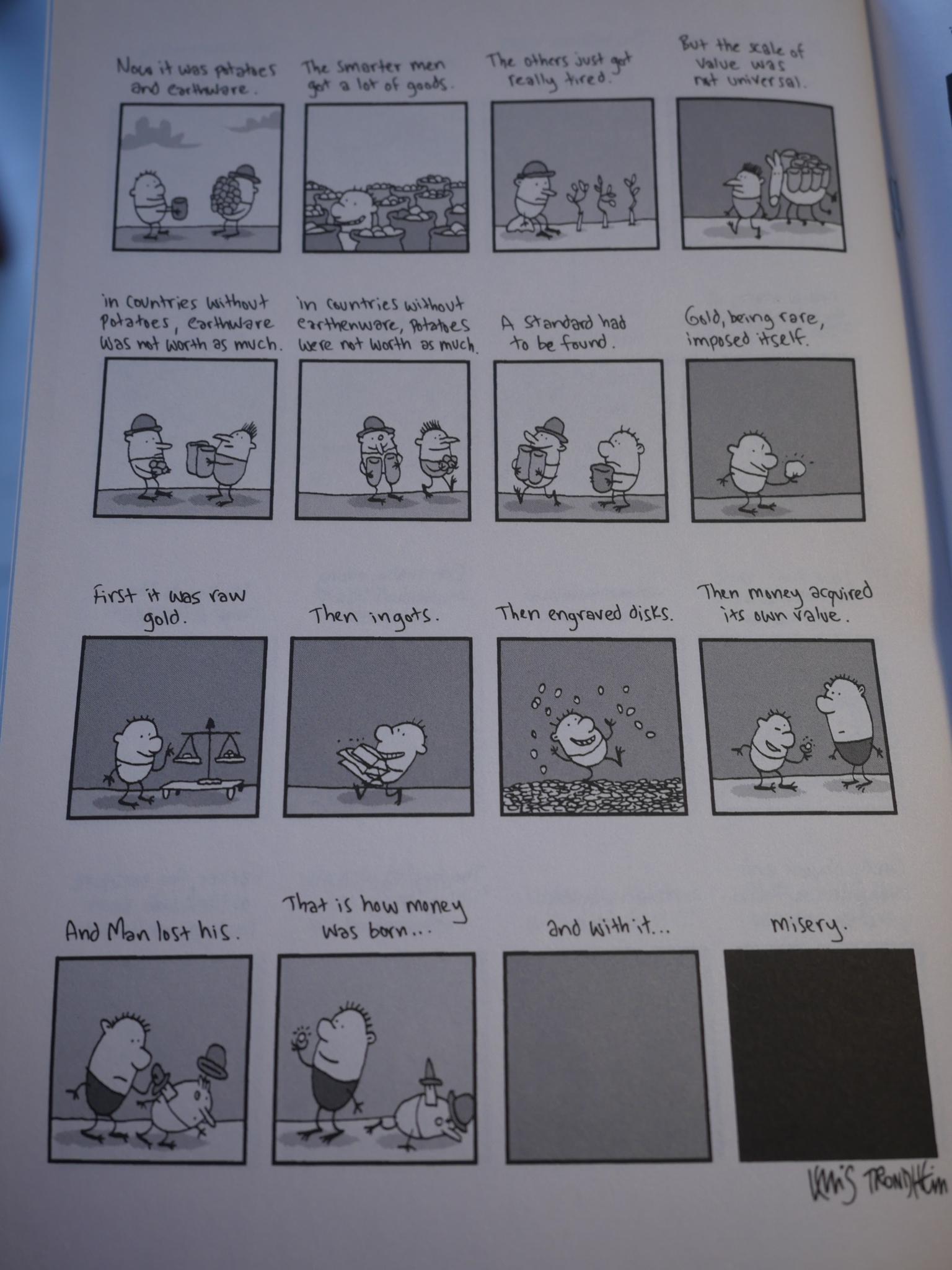 But, in my opinion, not this type of thing. These strips feel like he’s improvising some kind of philosophy while at the drafting table, and they’re frequently a bit on the hokey side. I find that it helps if I read the captions with a French accent. 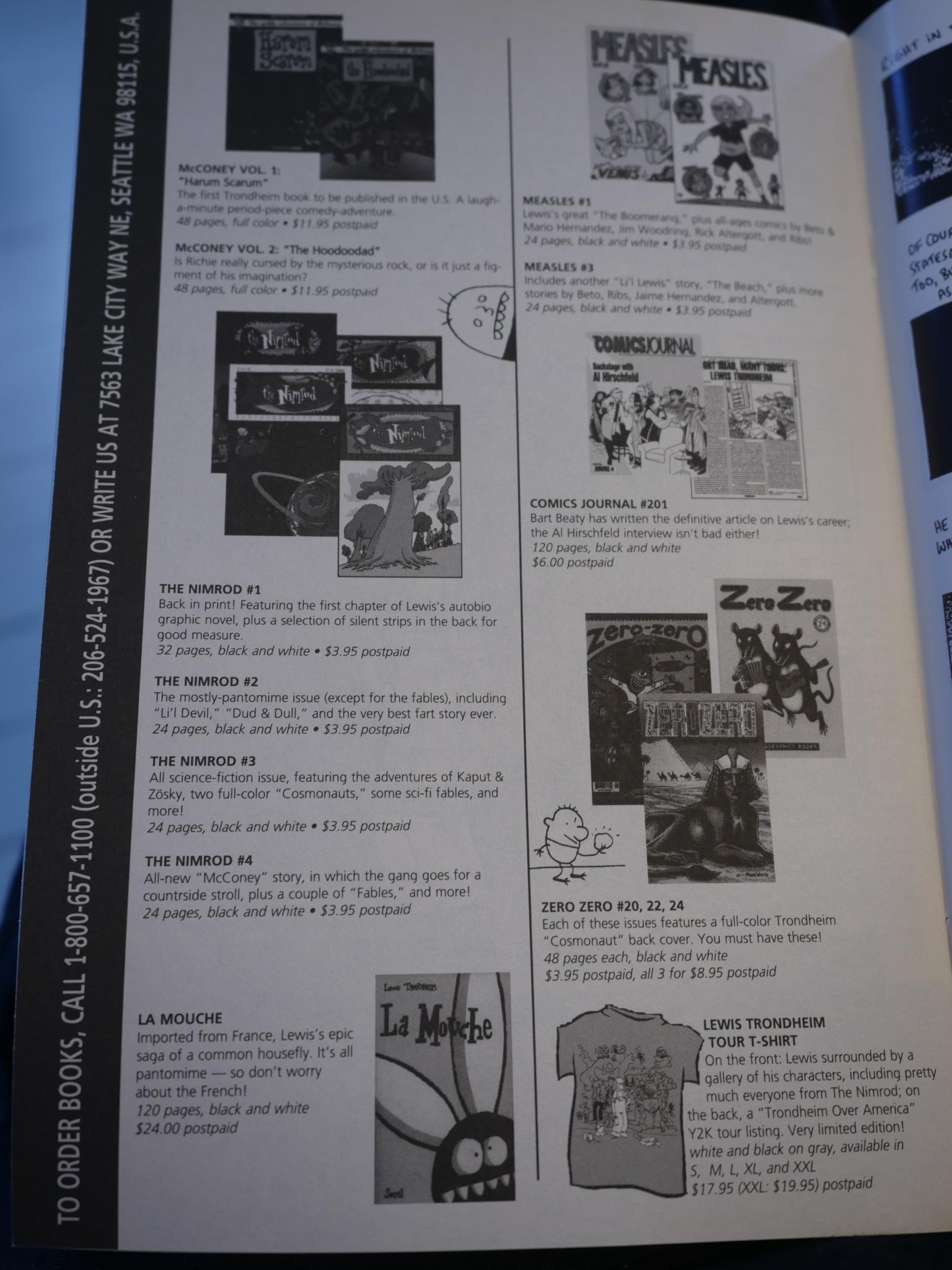 One thing I don’t think I’ve mentioned in this FF series is the way Fantagraphics does internal ads. In the early days, there was usually a couple of pages pushing stuff that might be of general vague interest to the reader of the comic book, but for books like this, they’re targeted particularly well. We get all the solo Trondheim books, but also appearances in the Measles and Zero Zero anthologies, as well as issues of The Comics Journal that have interviews with Trondheim.

I wonder how successful these ads are… They lend a certain air of slapdash cheapness to the comic books. 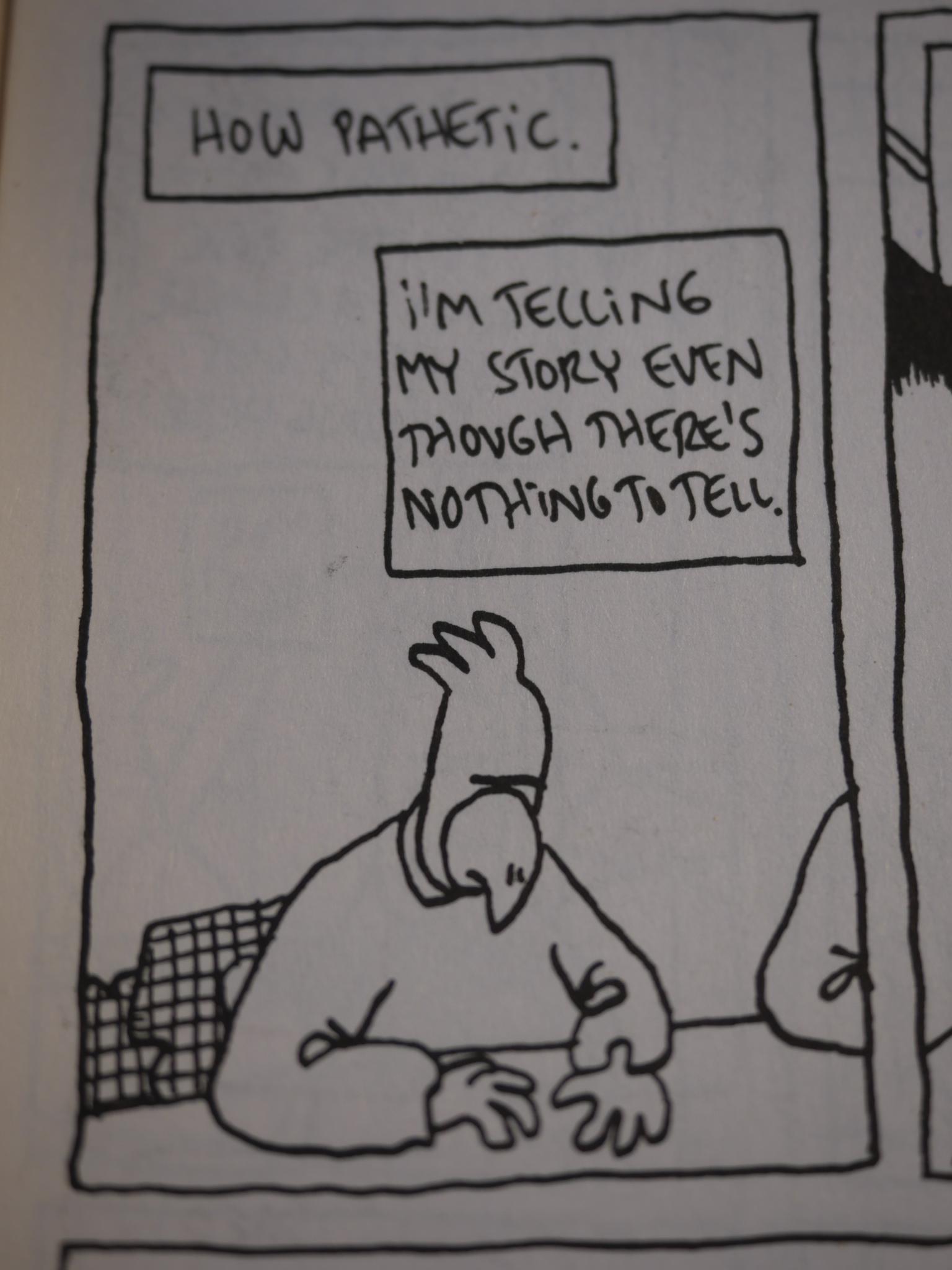 The final issue is published in 2003, 18 months after the penultimate issue. There’s no editorial in the issue, and it doesn’t mention that it’s going to be the last issue, but perhaps Thompson didn’t know. But perhaps this is the reason: 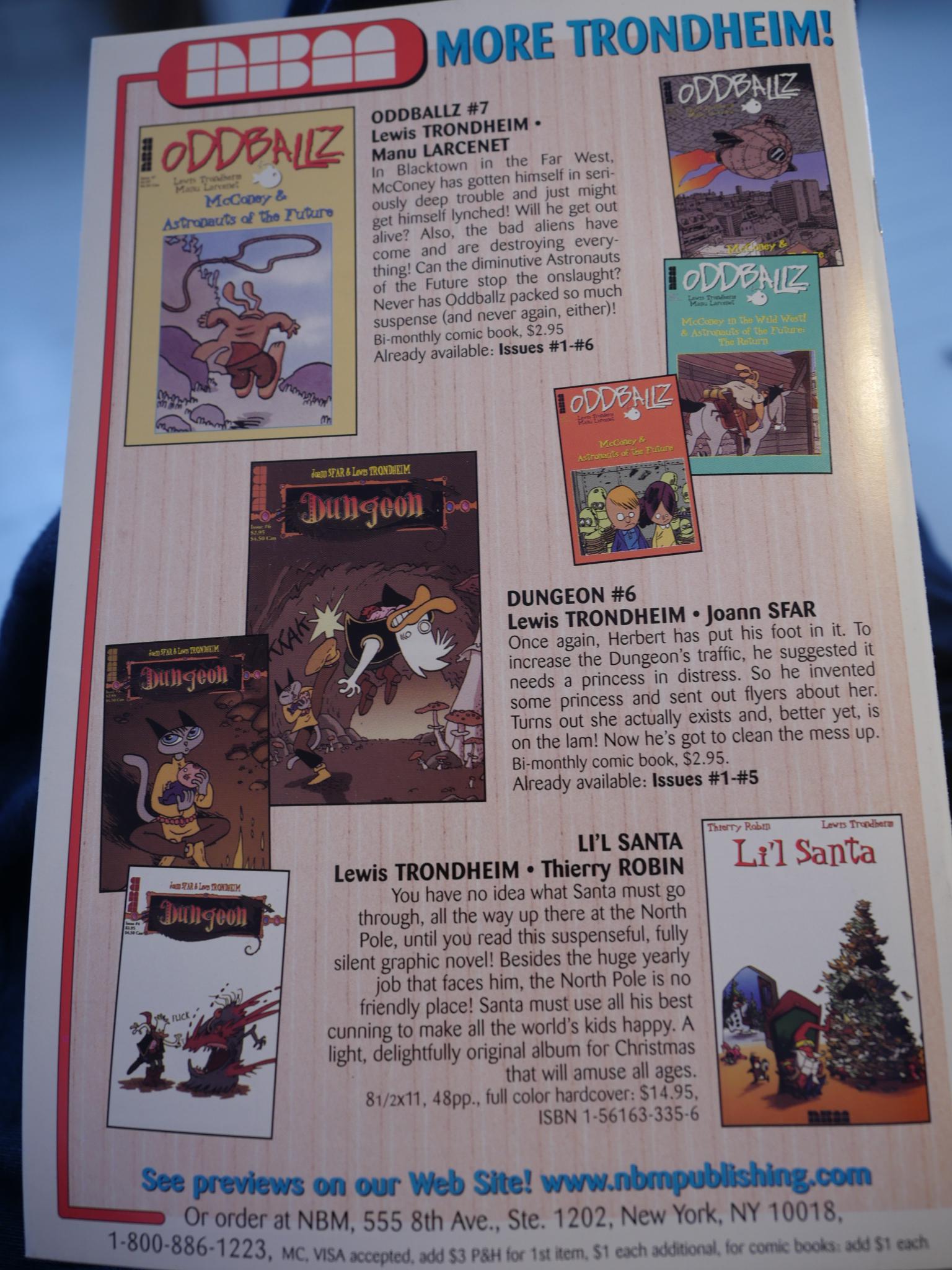 Apparently NBM found a way to sell Trondheim to an American audience that had eluded Fantagraphics, so Thompson just wished them luck and stopped losing money on The Nimrod.

NBMs Trondheim program seems to be quite successful. Or at least sustainable: They’ve published more than a dozen Trondheim albums and books, and they’re all pretty much great. Oh, I see that one of the series mentioned in the ad there is something called “Oddballz”, which looks like a pamphlet series. So NBM also experimented with that format before going all perfect bound? And I don’t seem to have that series, so I’ll have to fix that…