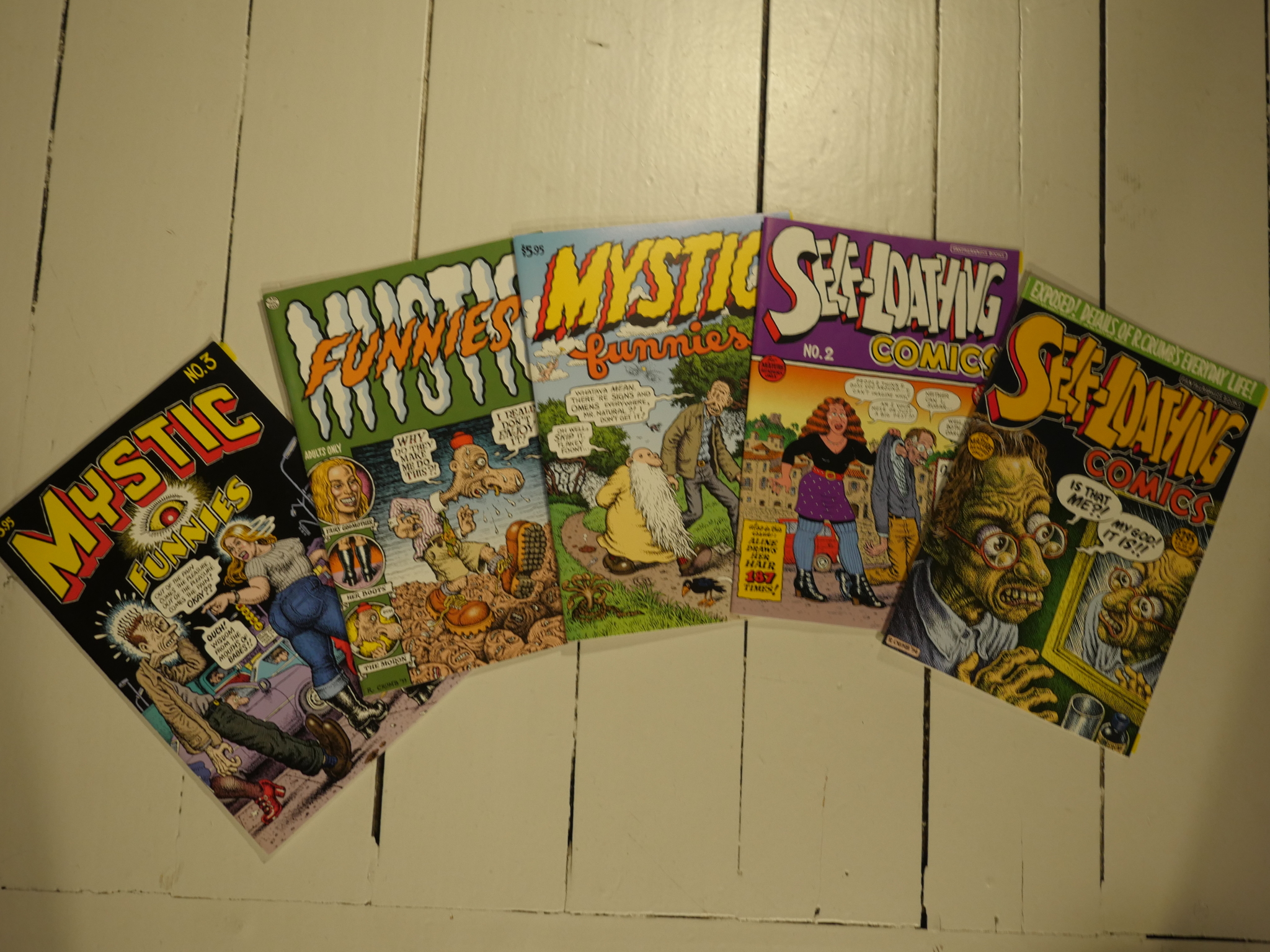 Fantagraphics has published a large number of Crumbian books, most notably the Complete Crumb Collection in the 80s, and the Love That Bunch collection in 1990. But they haven’t really published a lot of their original comics, just various collections. 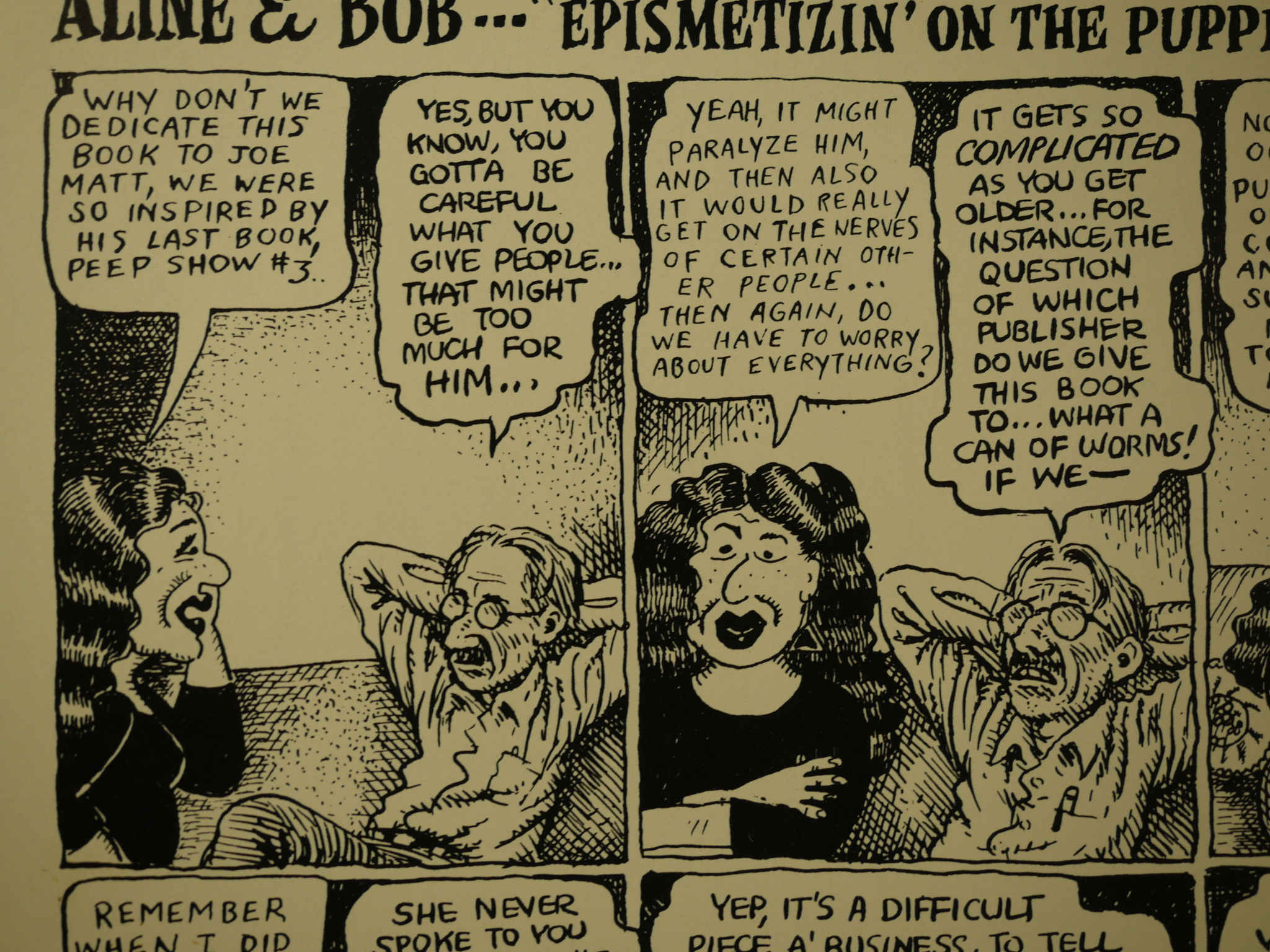 I didn’t even remember that it was Fantagraphics that published these comics: I thought they were from Last Gasp or Kitchen.

In the first issue of Self-Loathing Comics, half of the book is by Robert and half is by Aline. They collaborate on the two inside cover strips, but otherwise stay out of each other’s comics. And the concept is apparently to depict a single normal day in their lives from each of their points of view. 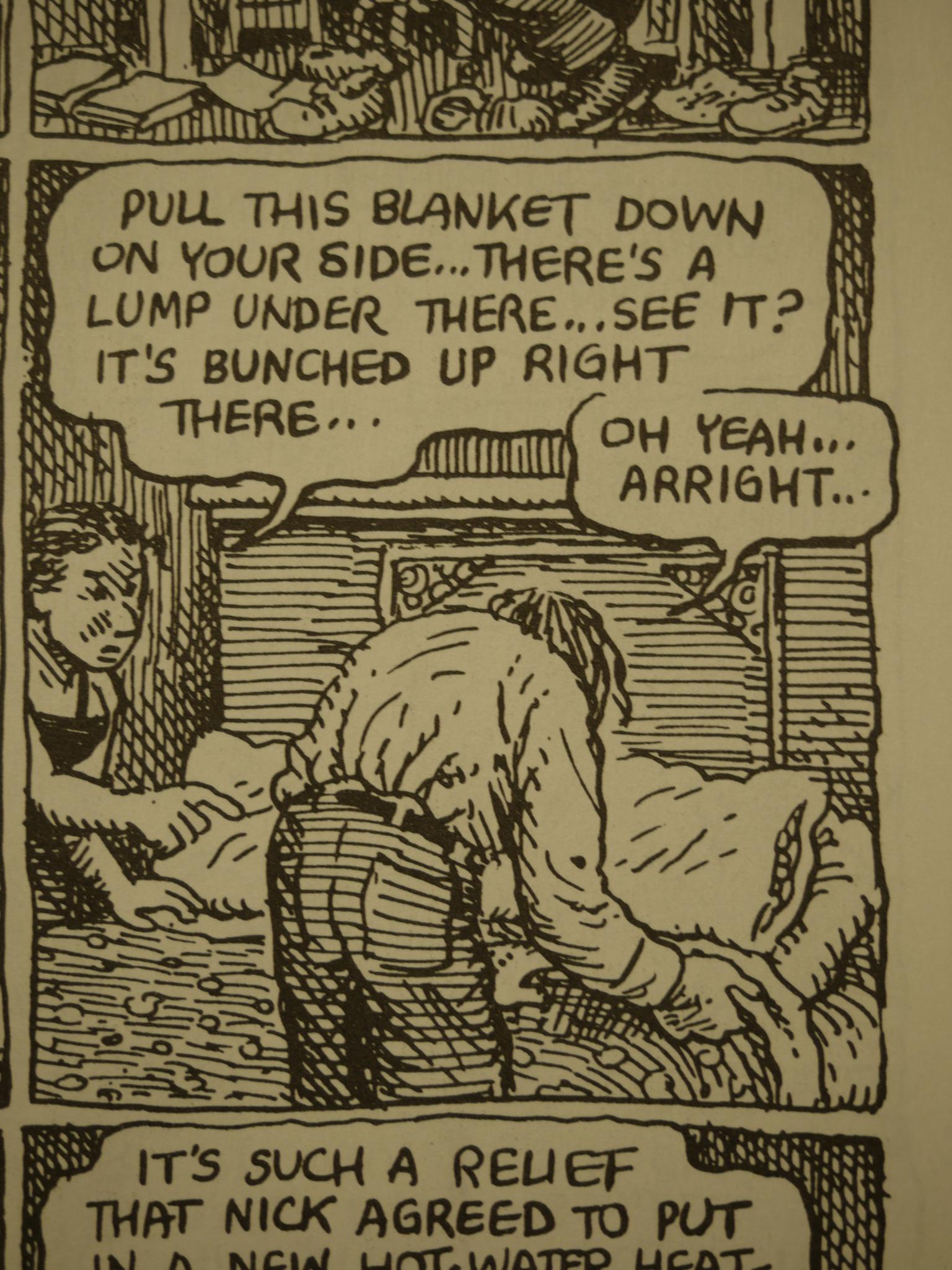 So we get the same actions depicted twice: Here’s Robert’s depiction of them making the bed in the morning… 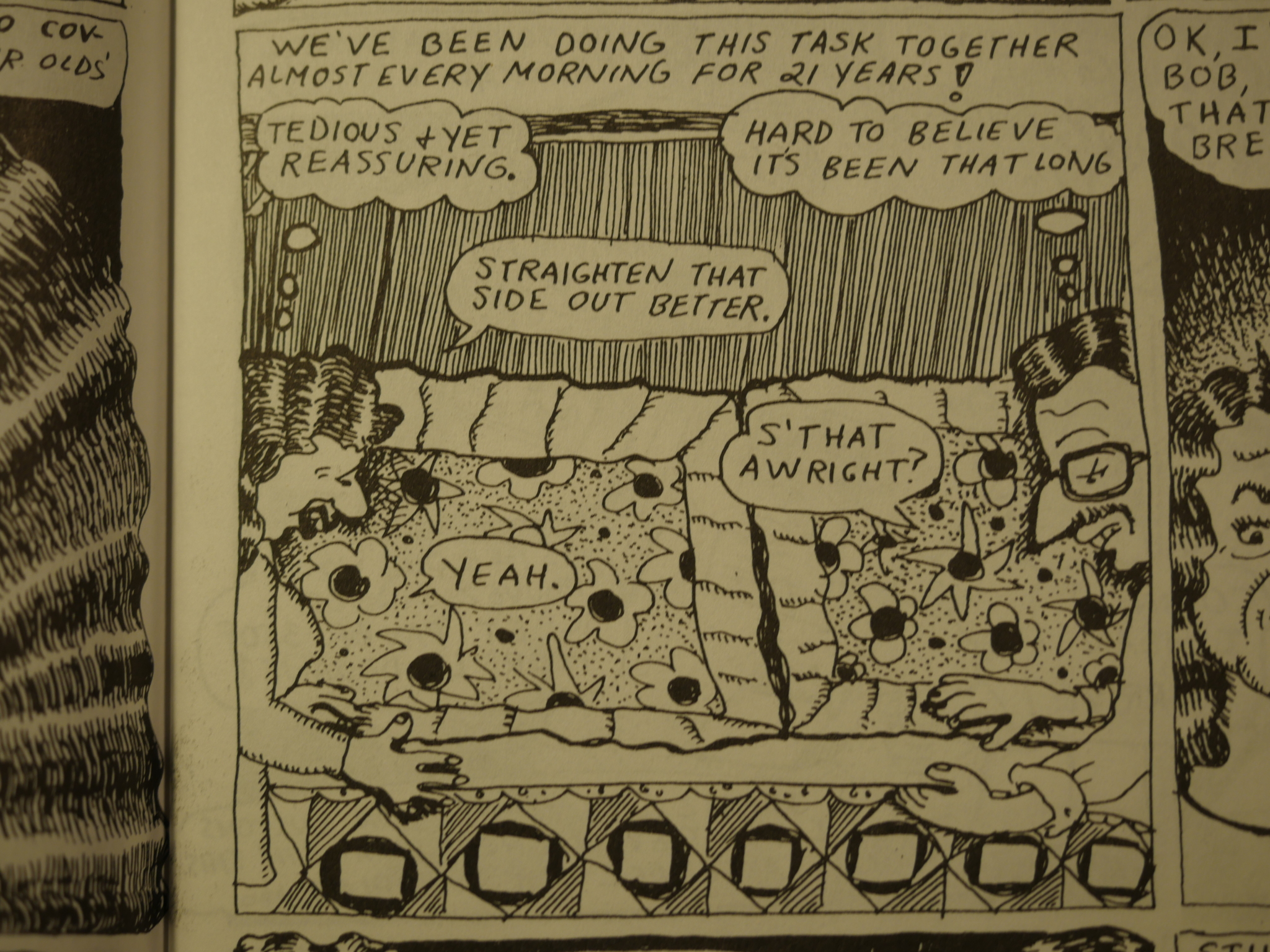 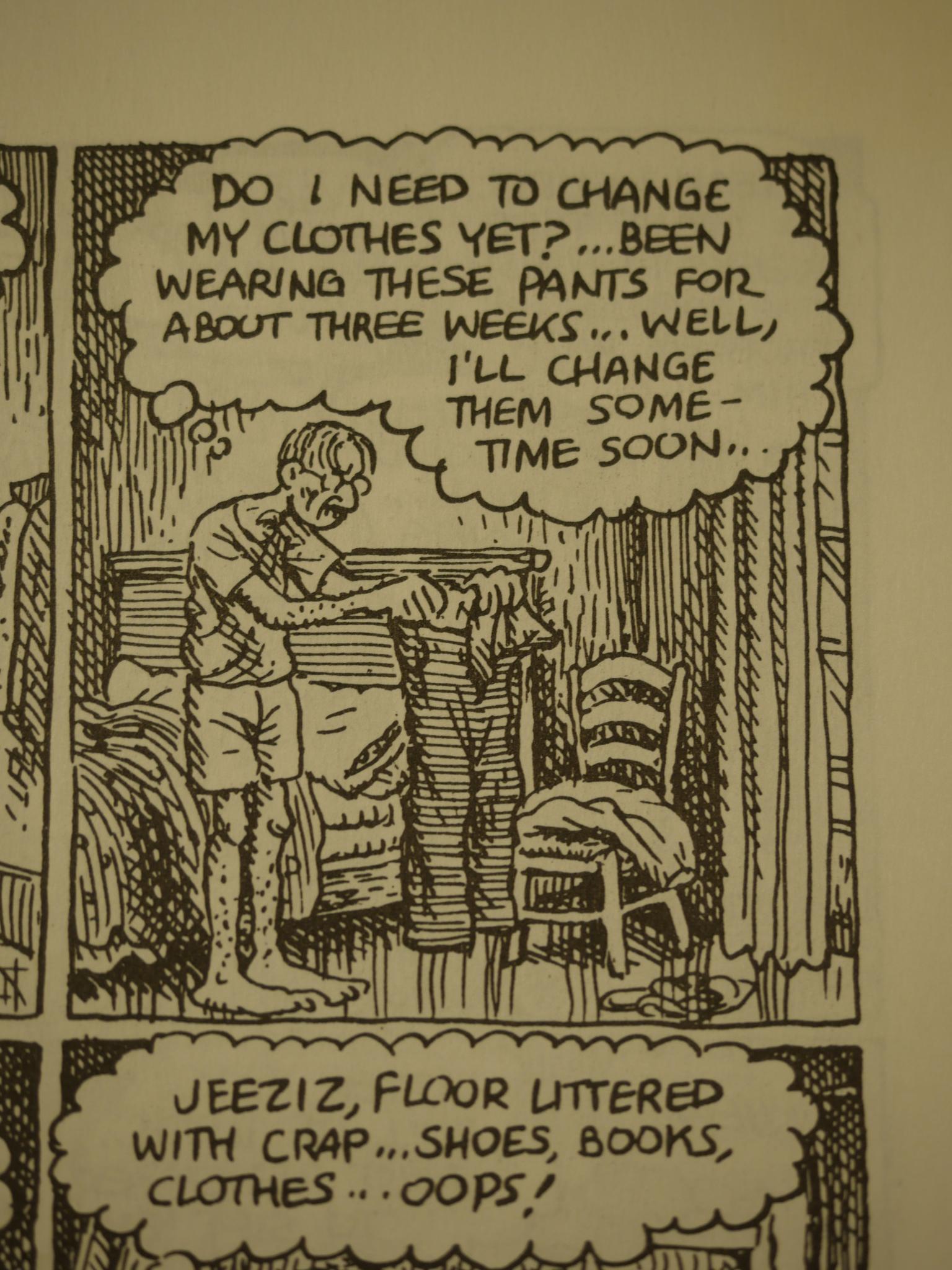 Both Robert and Aline has done autobiographical comics before, of course, but I don’t think anyone of them had taken it to this mundane level before. 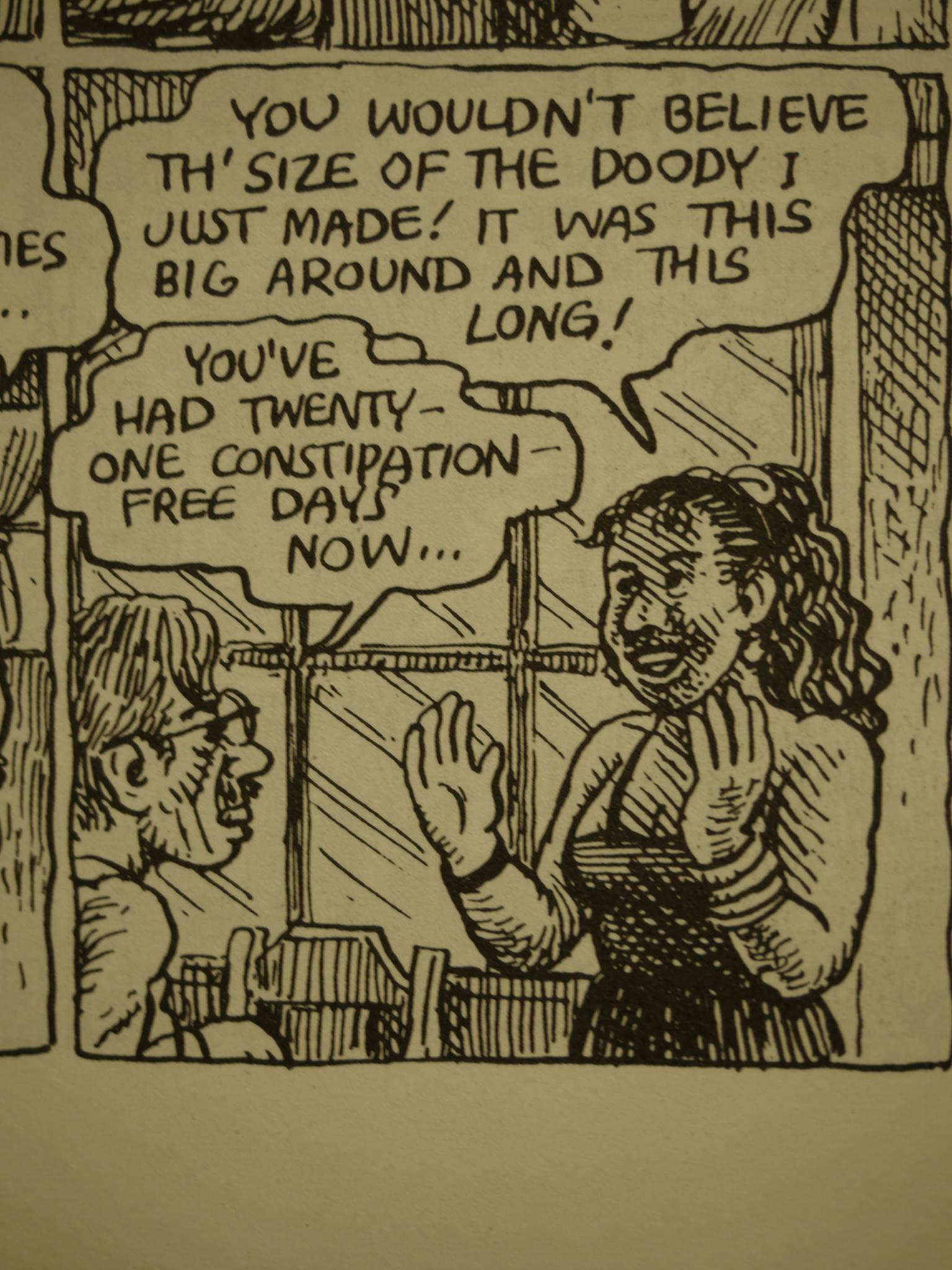 And I think that perhaps they are trying to out-Joe-Matt Joe Matt a bit. Especially Robert. 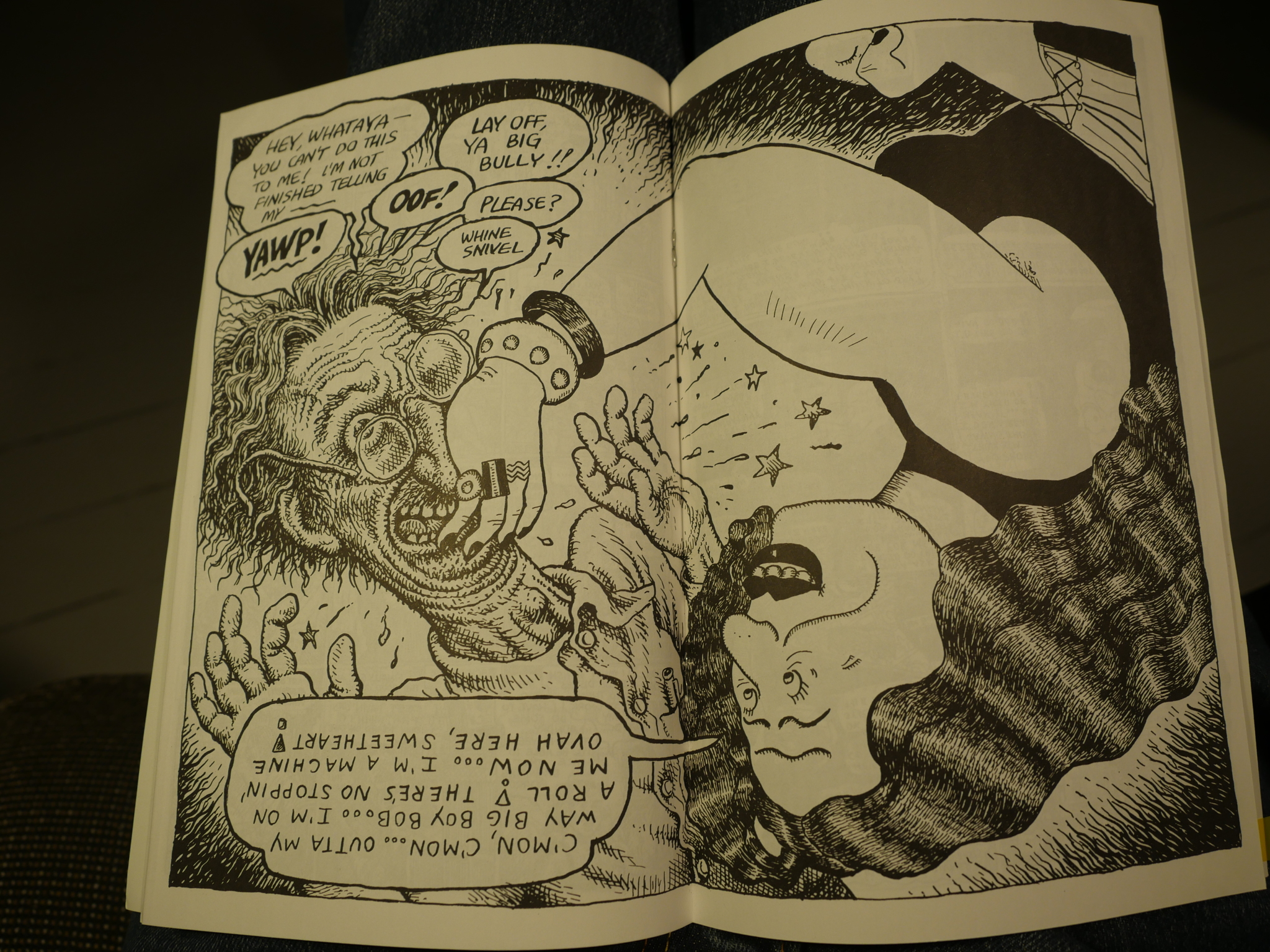 Here’s the magnificent handover in the centre spread. 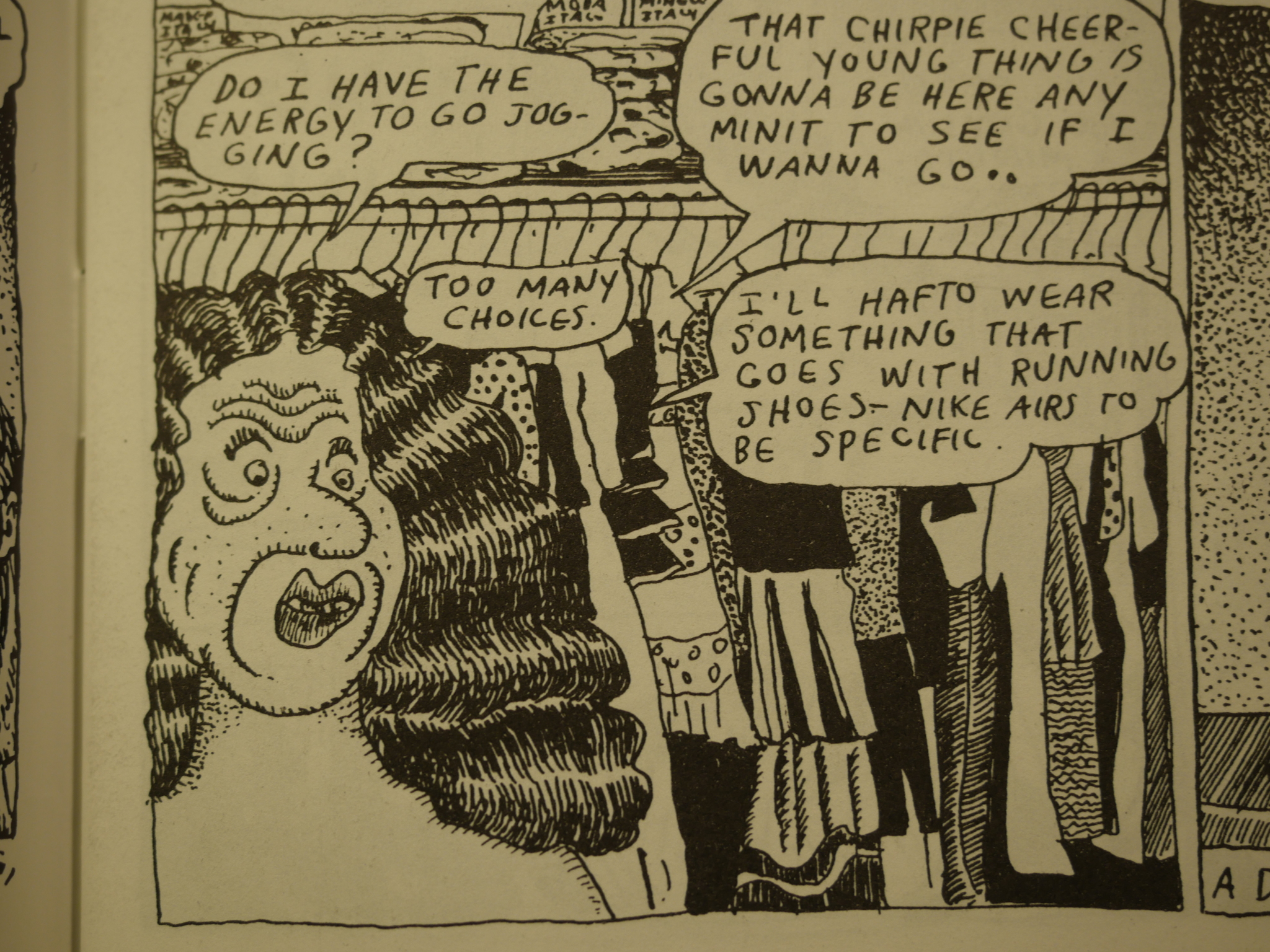 Aline’s half of the issue is perhaps less embarrassingly revealing (in a good/bad sense), and a few pages are taken up with ruminations on clothes.  Which I enjoy.

Robert draws beautifully as ever, of course, but there’s still something about Aline’s artwork that I feel is just so honest and in your face, and, yes, beautiful in a scratchy way. I love that clothes rack. 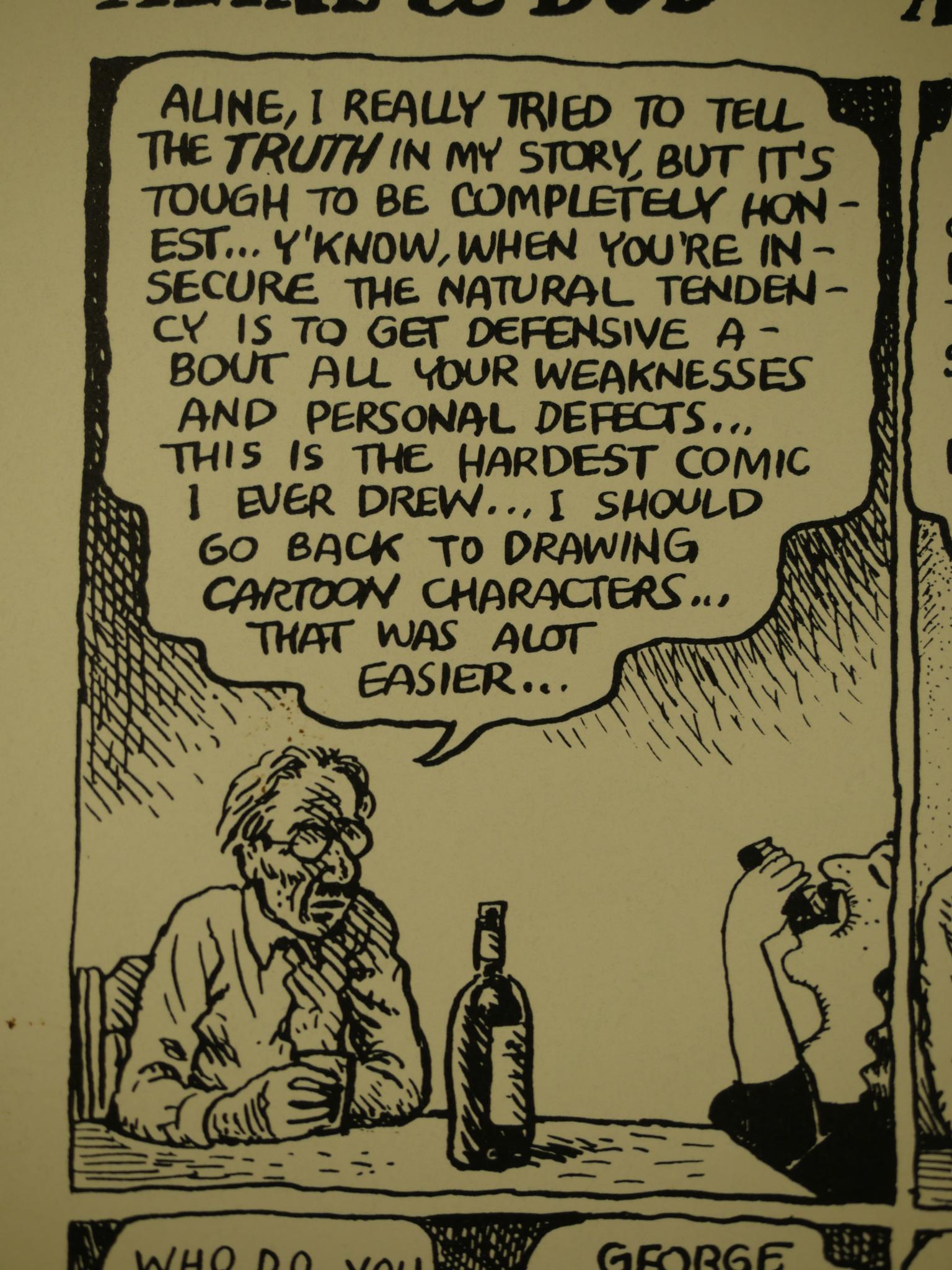 Robert sums up his thoughts on this experiment. 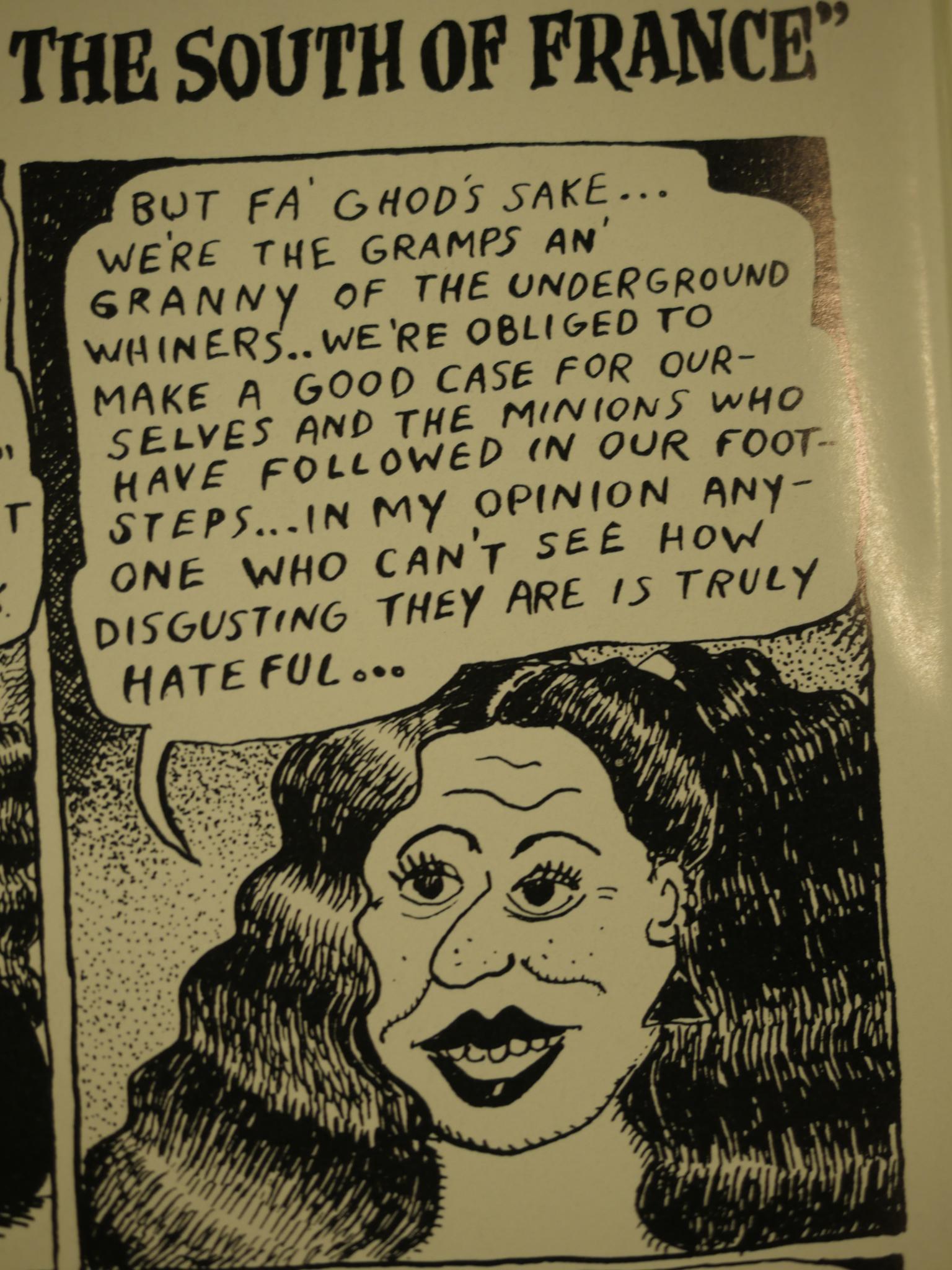 And Aline does, too.

My only problem with this issue is that it’s just too short. They only get to about lunch time, and it feels, pacing wise, that they were aiming for retelling a complete day. 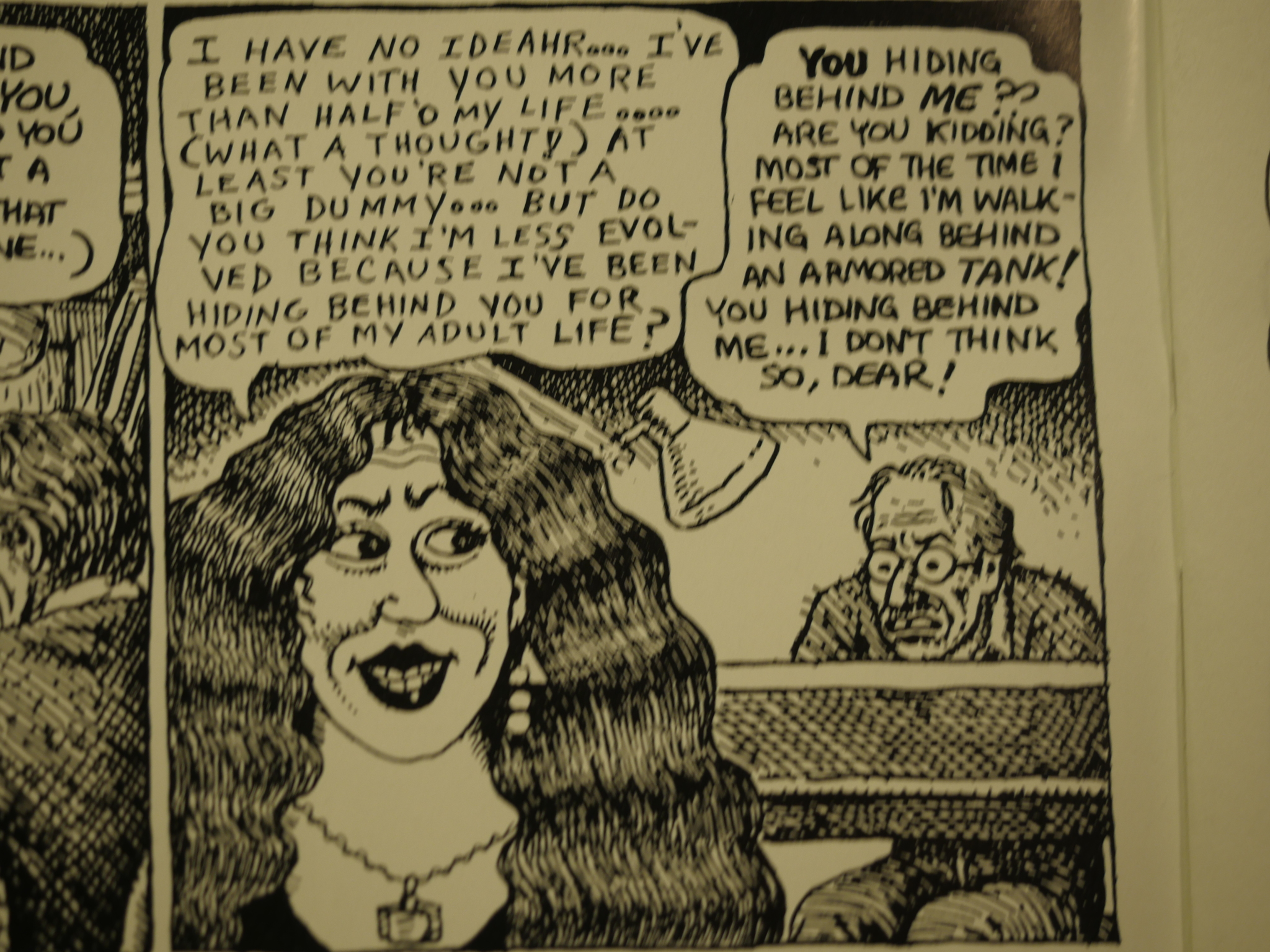 While the first issue felt like a serious attempt at doing something new and interesting, the second issue is basically a continuation of their Dirty Laundry series: Instead of each of them doing a separate story, they keep a conversation going by taking turns at writing and drawing, so most panels has text and artwork from both of them. 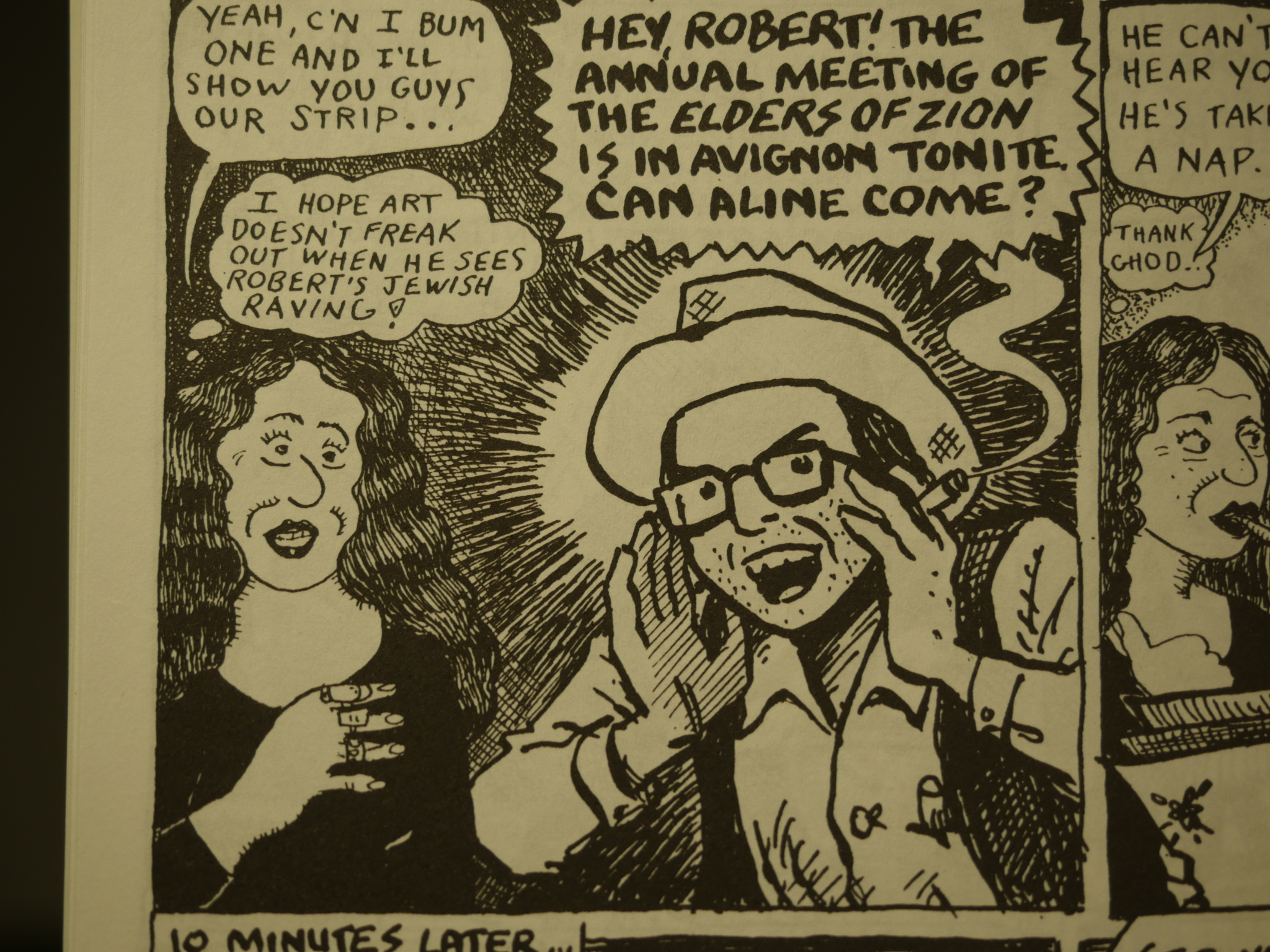 And other friends drop by and add to the mayhem, like Art Spiegelman here… 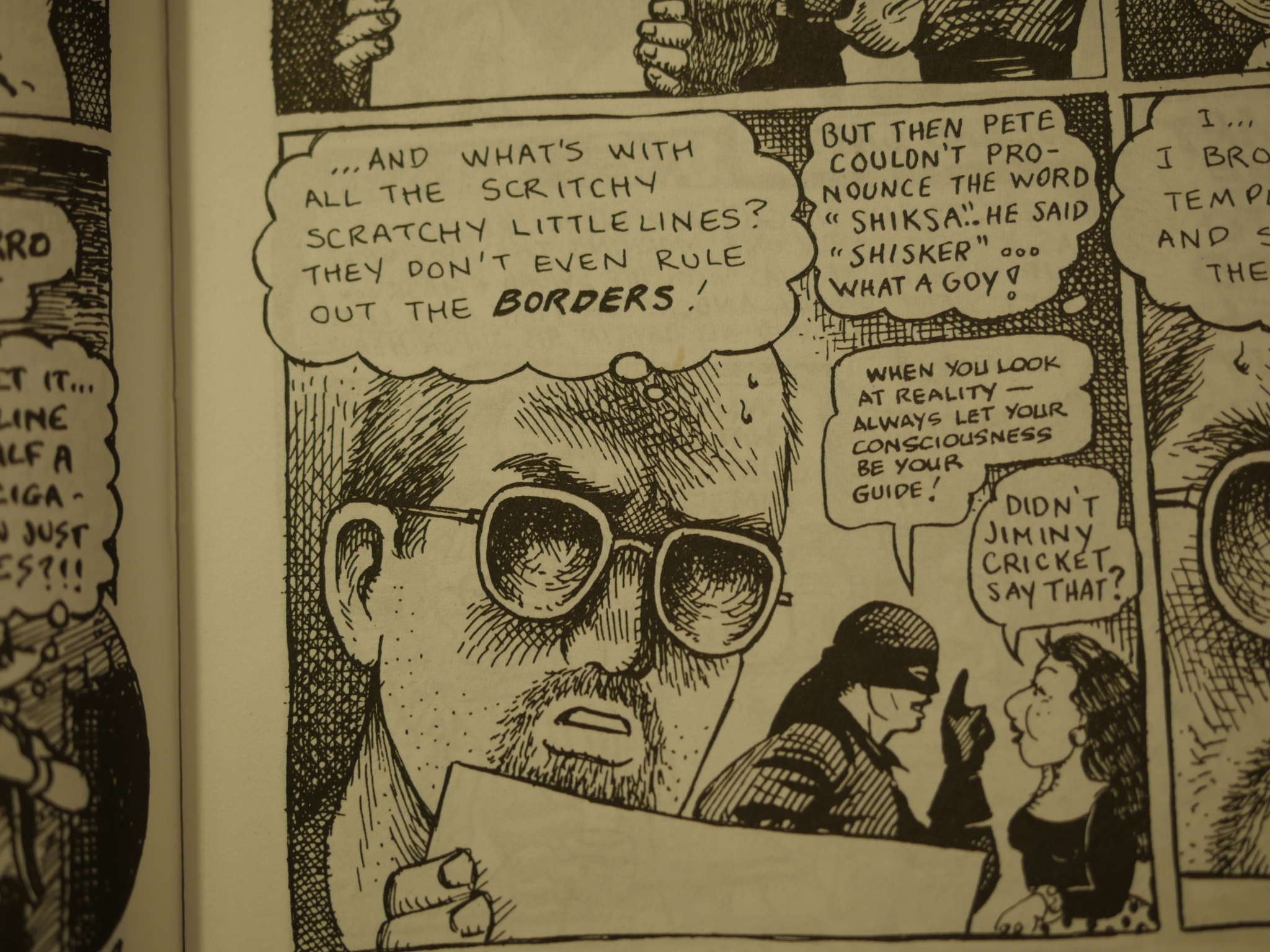 … and Charles Burns and Peter Poplasky here. Burns has a very amusing nervous breakdown brought on by looking at how scritchy the artwork is. 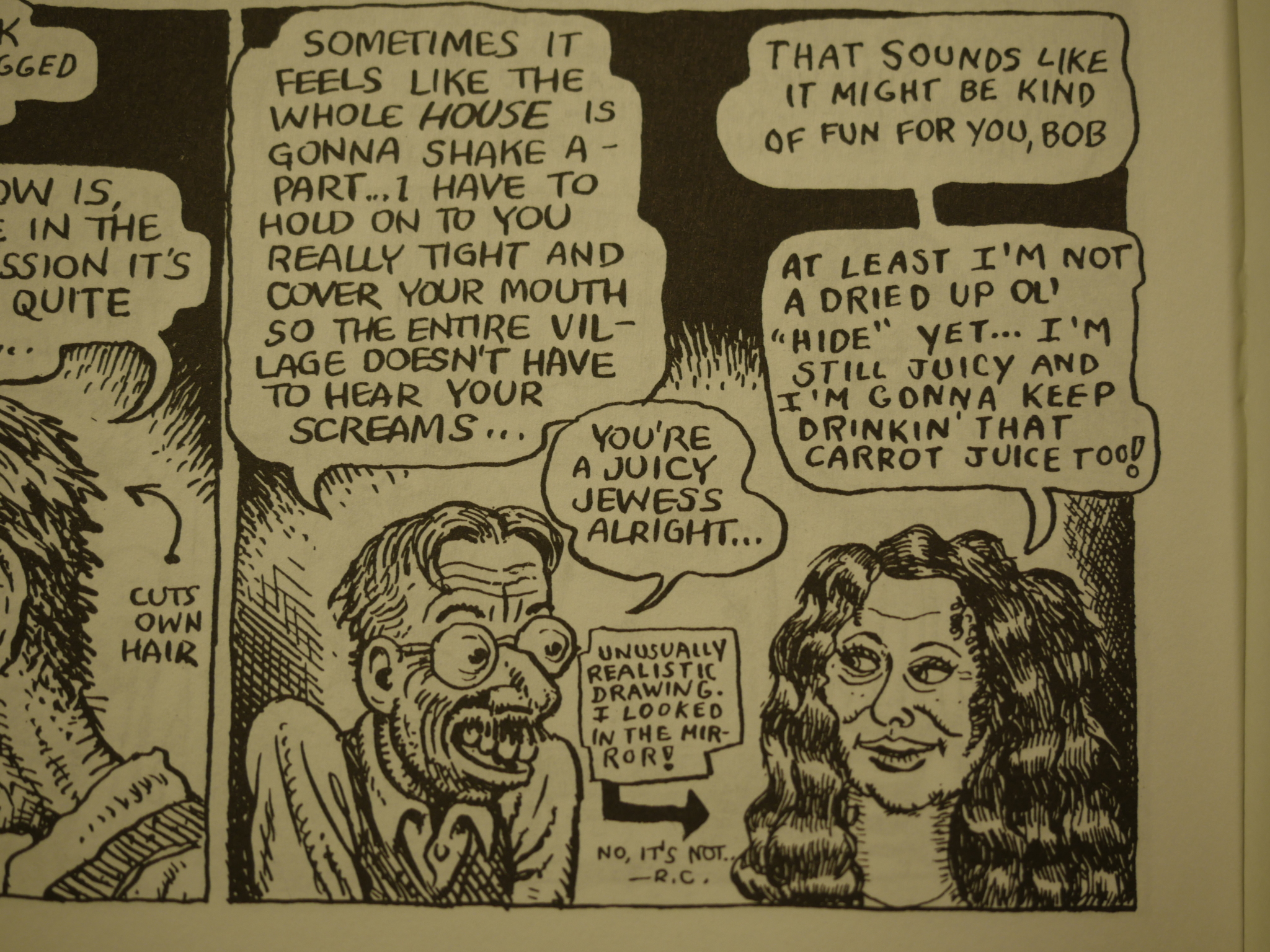 So while the second issue is a total goof-off, it’s a funny, pleasant read. I love the way they’re commenting constantly on what’s going on and the drawing, and (as we see here) comments on the comments. 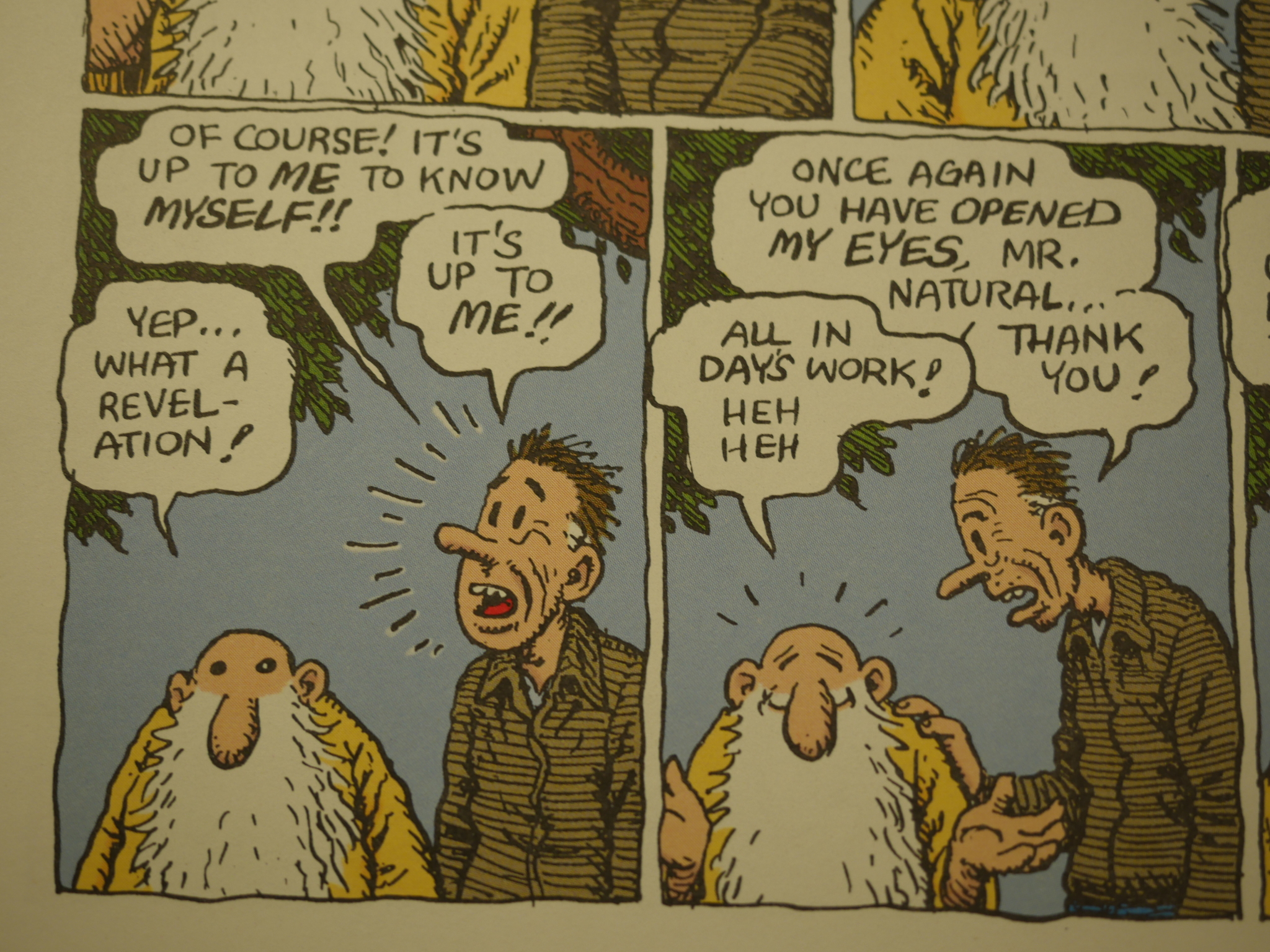 Mystic Funnies was Robert Crumb’s next comic book series, and, I think, his last. Fantagraphics reprinted the series in full, but originally only the third issue was published by them.

I’ve got the original editions, though. The first issue is published by Alex Wood, and according to the comics database, this is the only thing he’s published. It’s also in colour, and it has a pretty steep price for a 1997 floppy comic book ($6), so it’s all rather odd. I’m reminded of the “Which publisher do we give the book to?” question Robert posed in the second panel up there at the start of this blog post. (And presumably it’s “give”, because I would assume that any Crumb book is bound to sell a lot.) 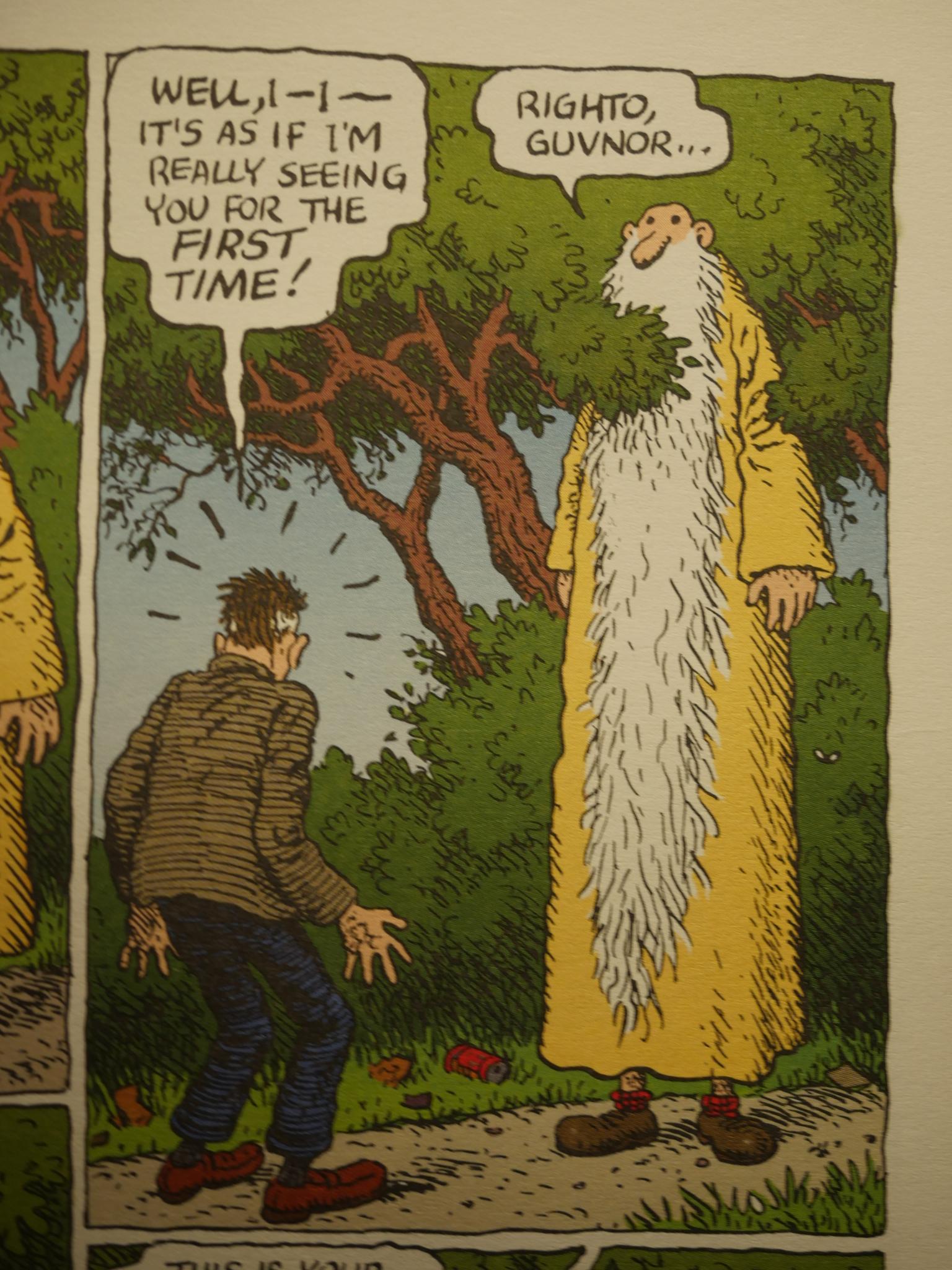 The book features Crumb’s old, old characters Flakey Foont and Mr. Natural, and they’re pretty much as they used to be. Crumb makes fun of new age mystics and people on the search for “meaning”, but in a sympathetic way, mostly. 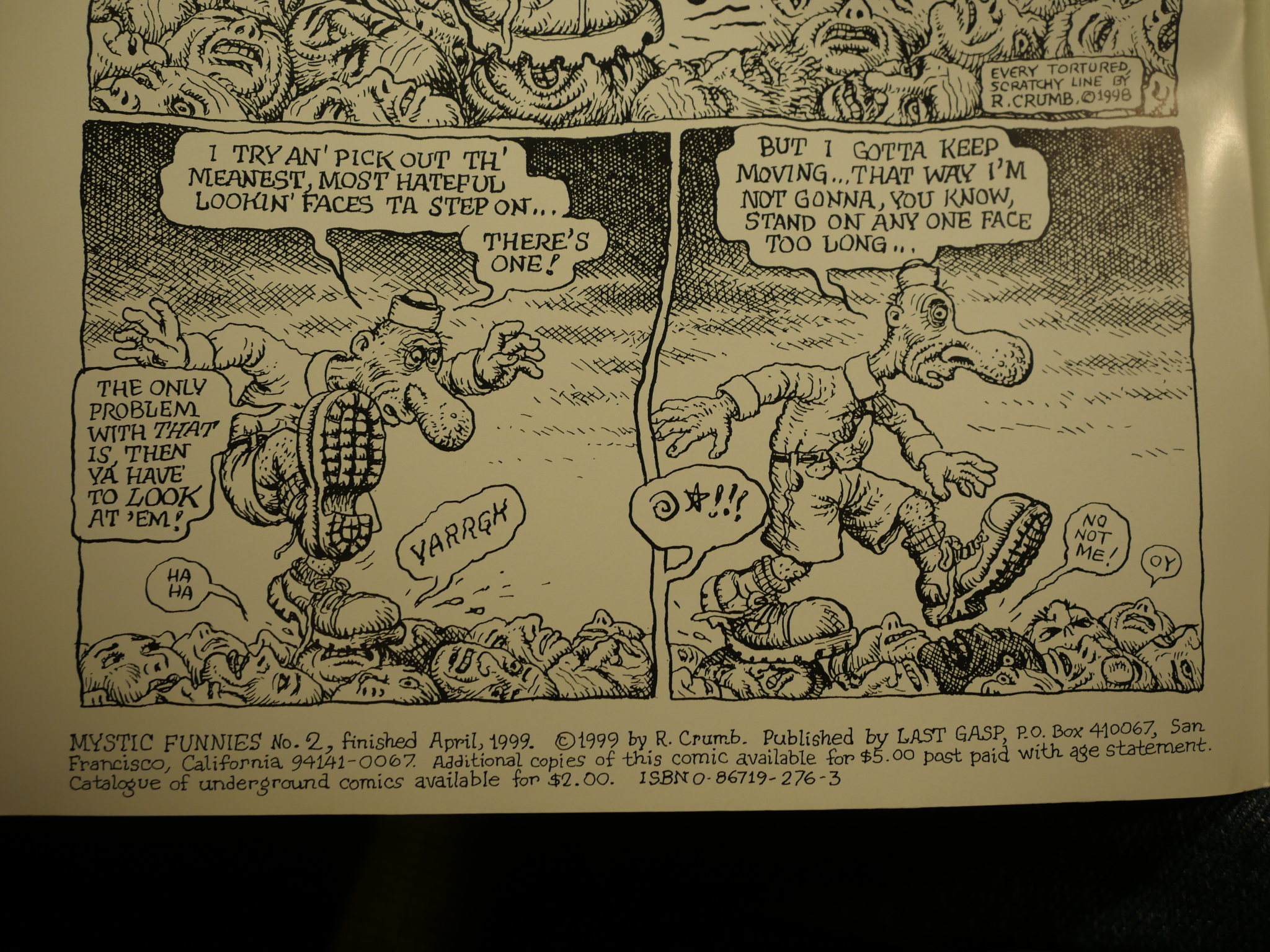 The second issue is from Crumb’s long time publisher Last Gasp, and is in black and white. It continues the philosophical meanderings, but is more pointed this time. 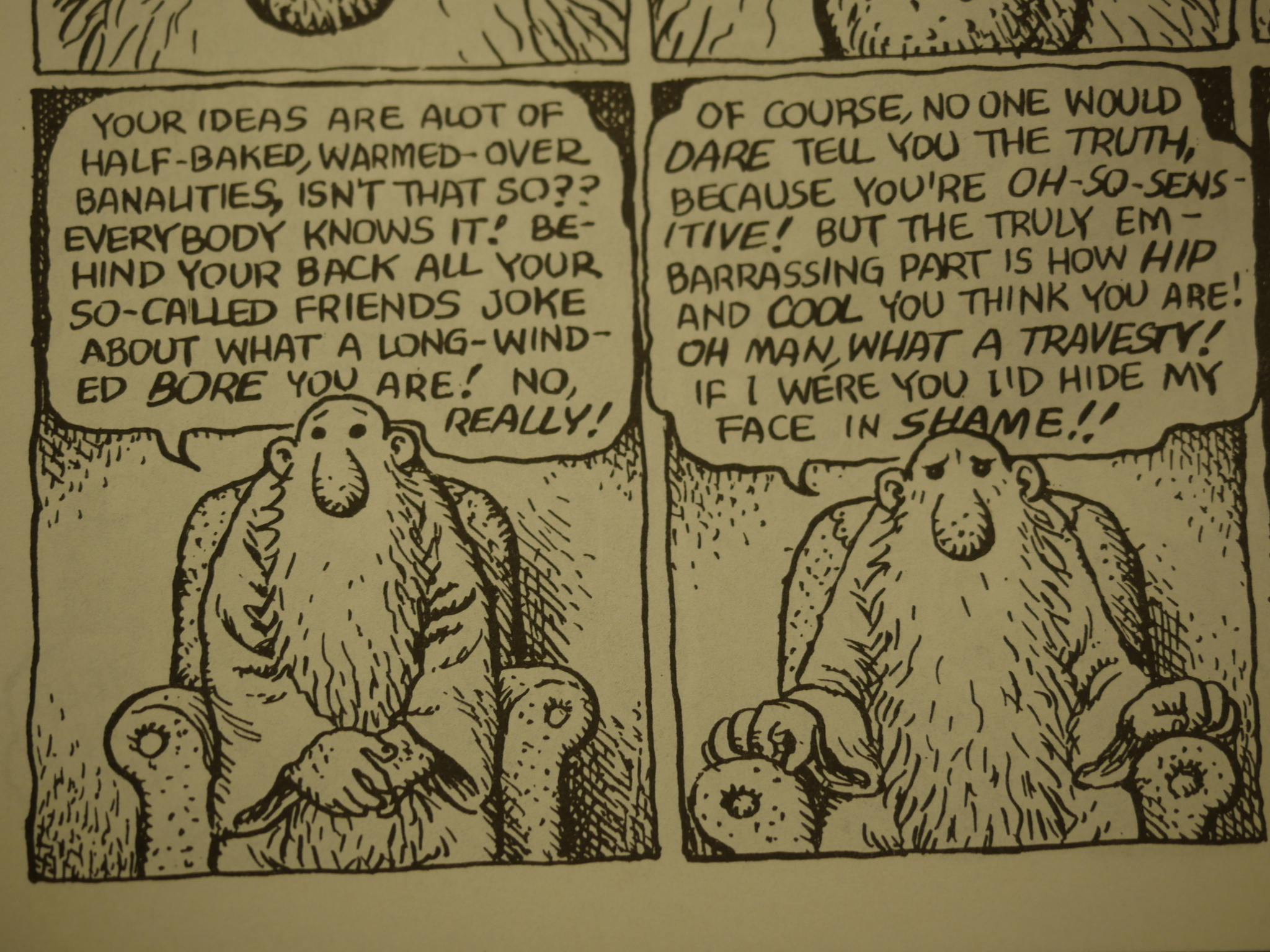 The stories have an improvised feeling, but I guess that’s true of most of Crumb’s work. 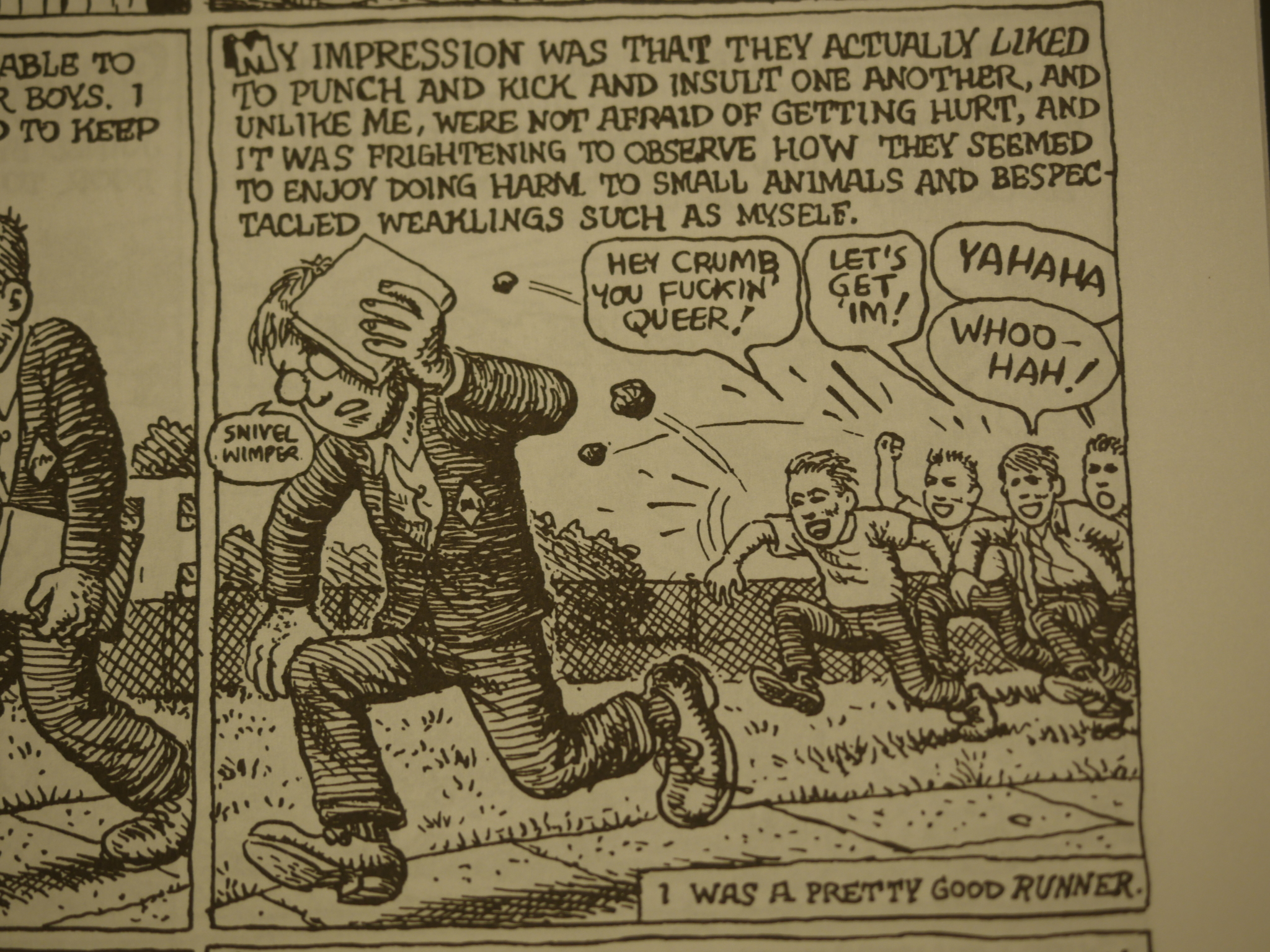 Which is totally fine be me: I think it’s perhaps the strongest issue of the three. We get one longer weird story, one childhood reminisce, and one Donald Duck parody. 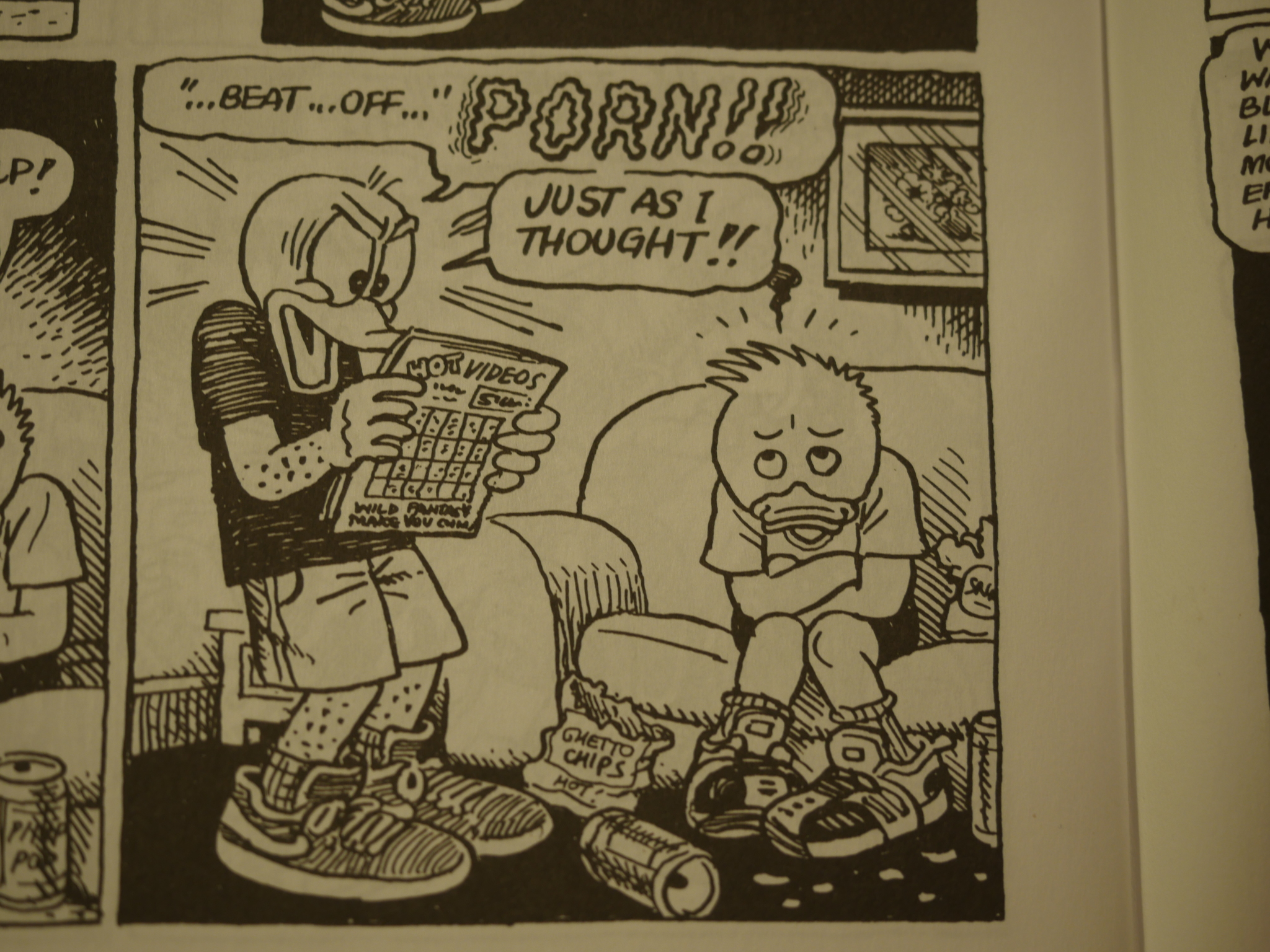 Sort of. It’s a solid issue.

Robert Crumb is, of course, enormously popular, so I’ve always been puzzled by the rather lethargic reprinting attempts. There was The Complete Crumb Comics, but the format felt like it was geared towards pendantic obsessives rather than readers. Other bits and pieces have been given the luxury treatment, but much of Crumb’s work is inaccessible. Somebody should do a more comprehensive, attractive reprinting programme, like Drawn & Quarterly are doing with Lynda Barry, for instance, or Fantagraphics are currently doing with Carl Barks. This seems like such a no-brainer that perhaps the problem is one of rights? Crumb has been published by a large number of publishers over the years…

Most of Aline Kominsky’s work was collected in the Need More Love book about a decade ago, and it’s rather wonderful.

One thought on “FF1995: Mystic/Loathing”