Ten Years of Love and Rockets, Tales from Shock City #1, Blubber #1-3 by Beto Hernandez with Mario Hernandez and Jaime Hernandez. 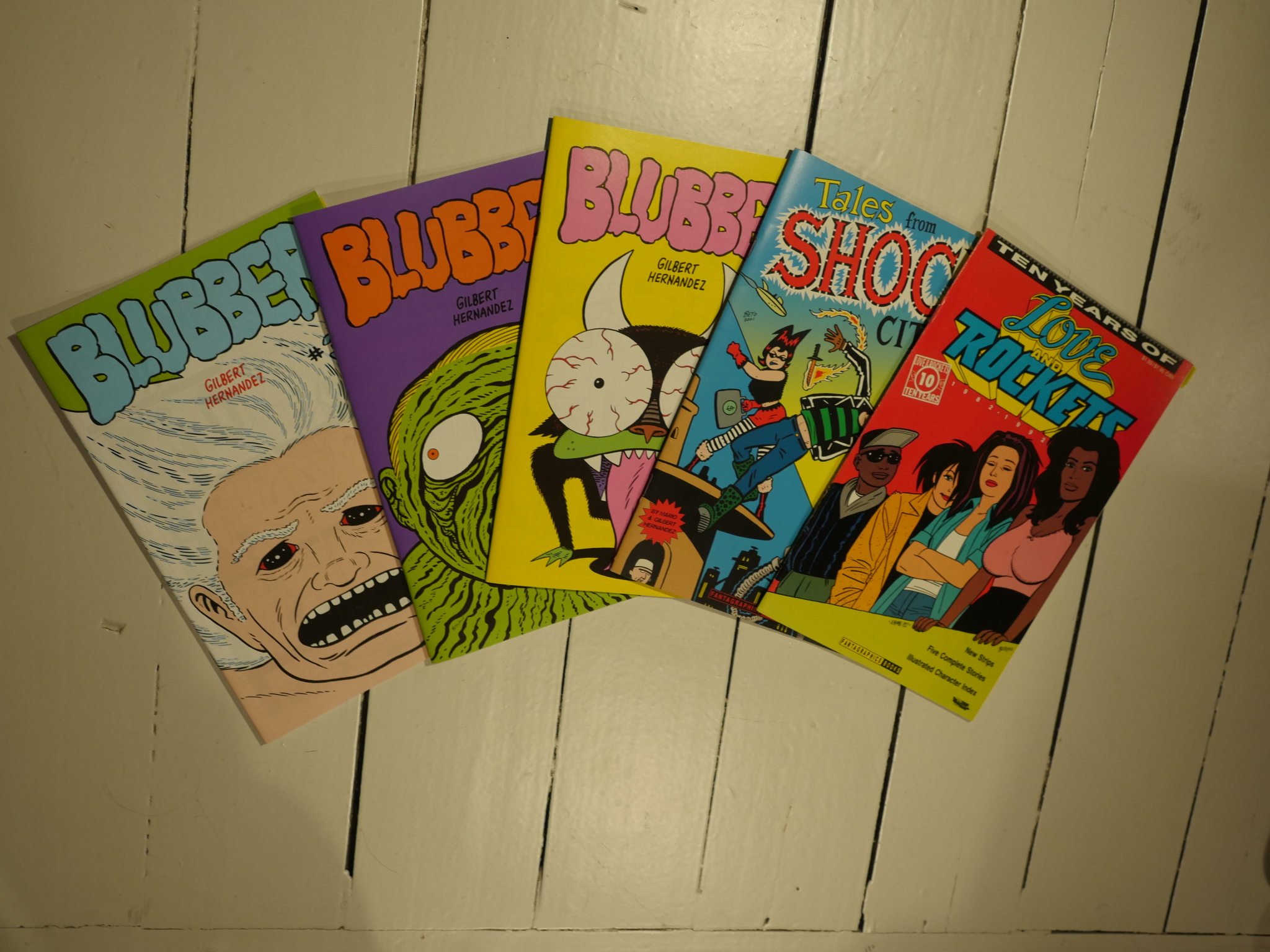 These are comics that I should have covered in the Love and Rockets blog post, perhaps. At least the first one. Probably not the last one.

It’s a bit of a mish-mash, but anyway. 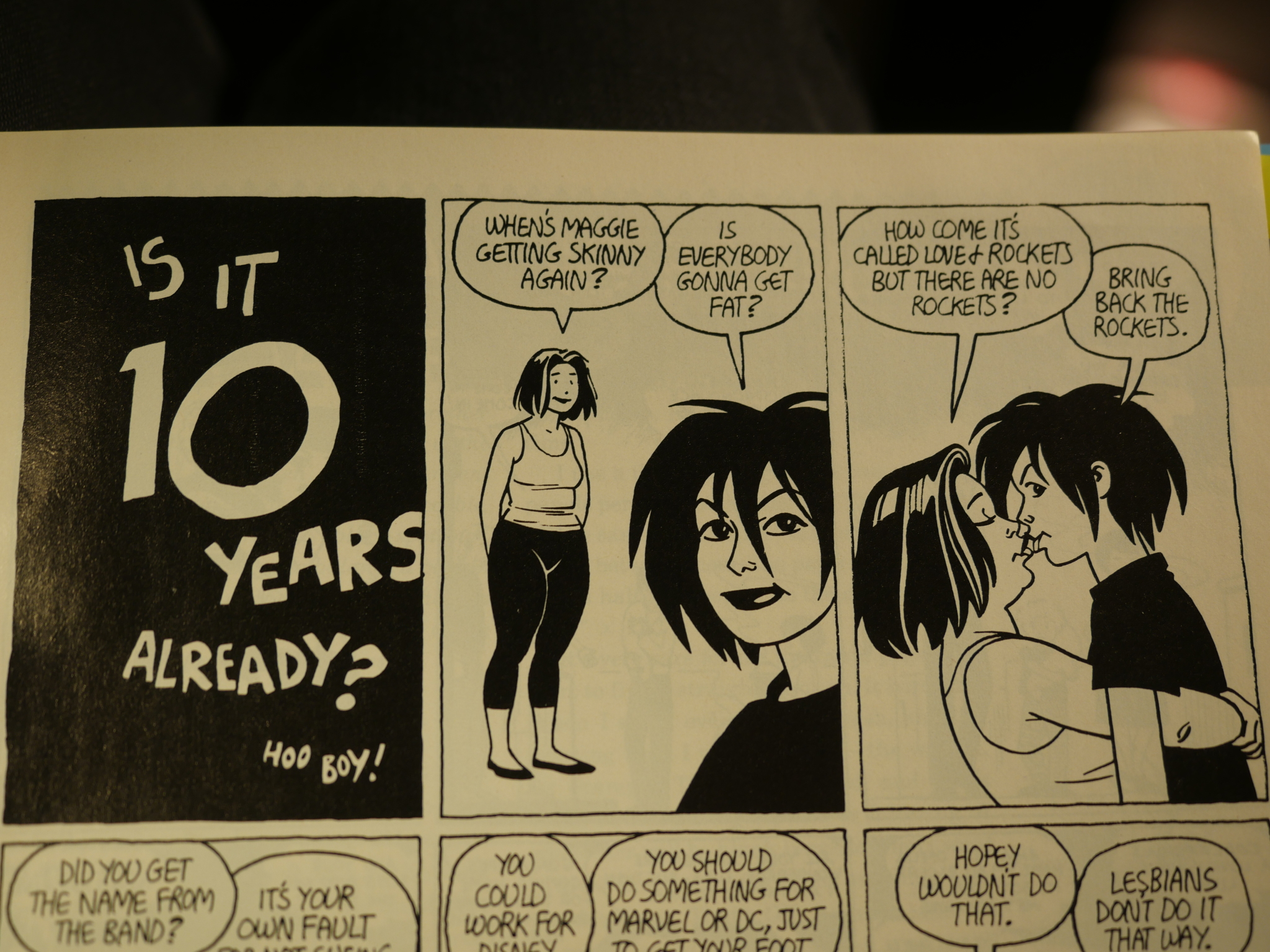 Ten Years of Love and Rockets reprints a few shorter stories, and there’s a character index and stuff, but the real attraction is two new one-page pieces, as well as two articles on their artistic processes.

Jaime illustrates some common reader question and comments for a very cute page. 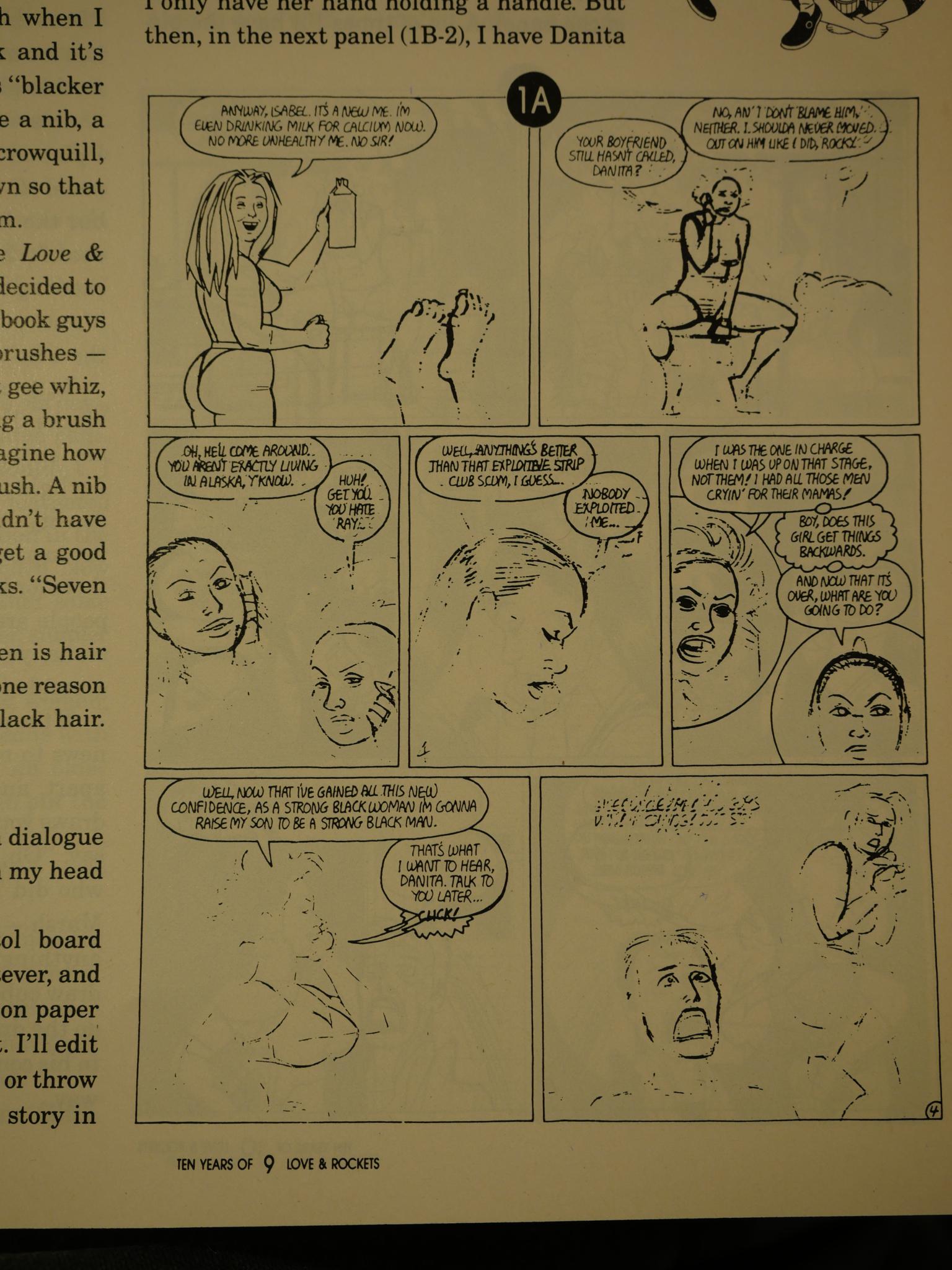 Jaime comments on his process: On this page that he hasn’t drawn the refrigerator the character in the first panel is opening because he skips to the bits he’s most interested in, so he’s pencilled the second panel (with Daniela) in full. You see the problem here? The reproduction of the pages-in-process is absolutely horrendous, so it’s often difficult to see what the brothers are talking about.

Other than that, these essays are absolutely fascinating. I don’t know whether they’ve been reprinted anywhere else. 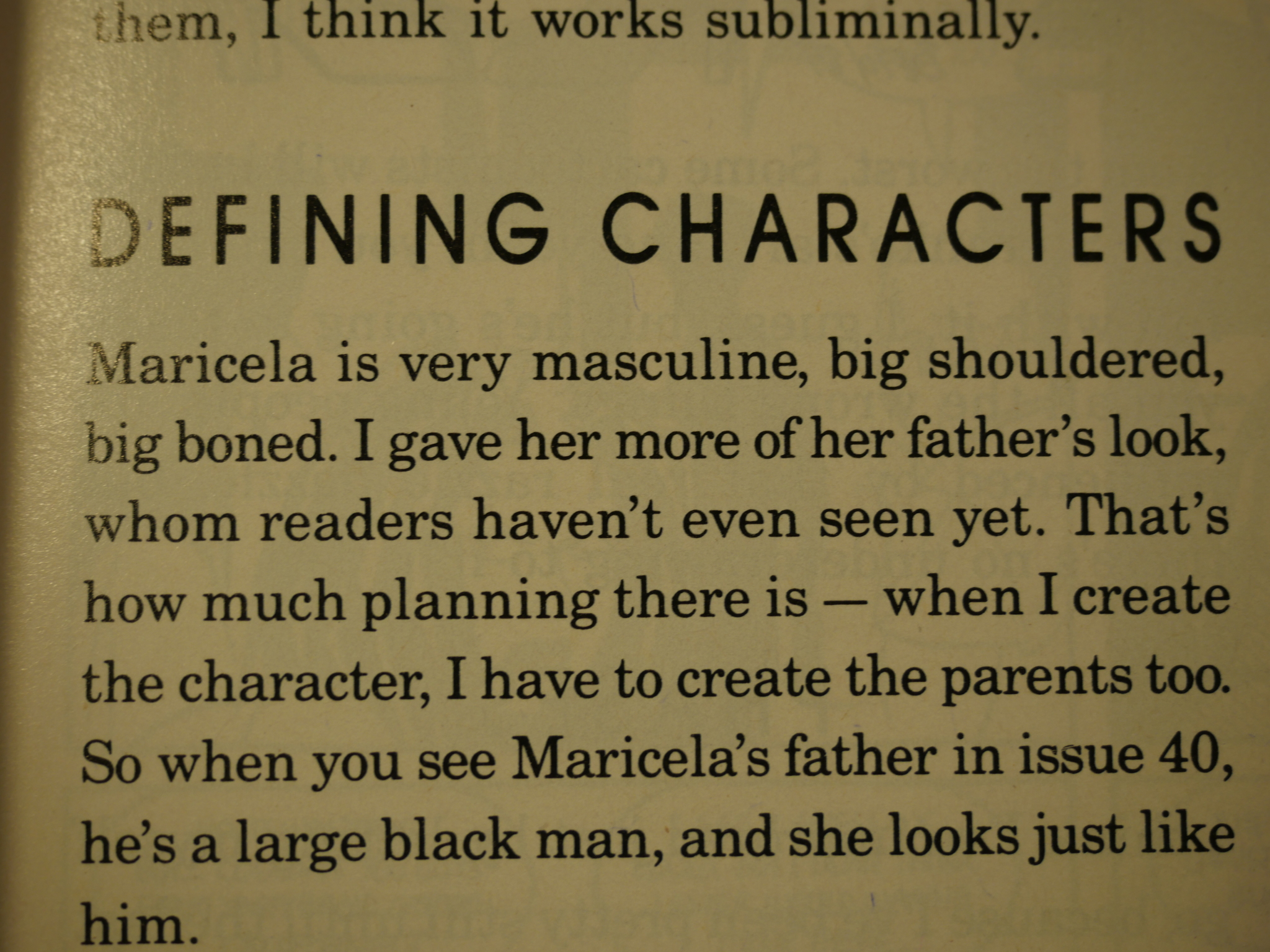 For instance, we learn just how much planning Beto does for his characters, but there’s a lot of minutiae on panel borders and perspective and dimensions that just tickles the process nerd in me. 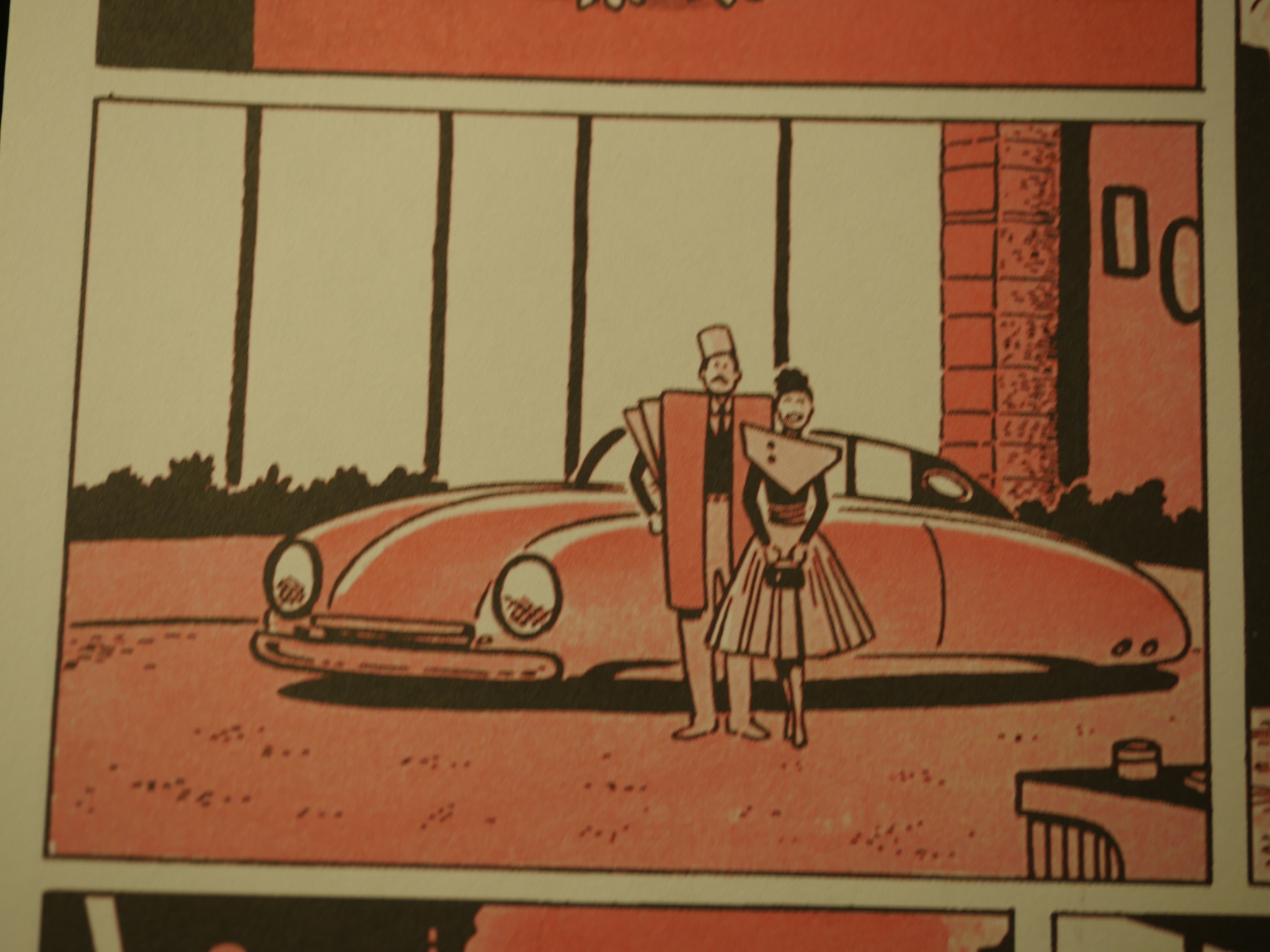 Tales from Shock City reprints the backup strips from the Mister X comics, published in the mid-80s by Vortex, along with one new piece, and one piece that may have been started at the time, but finished in 2001. 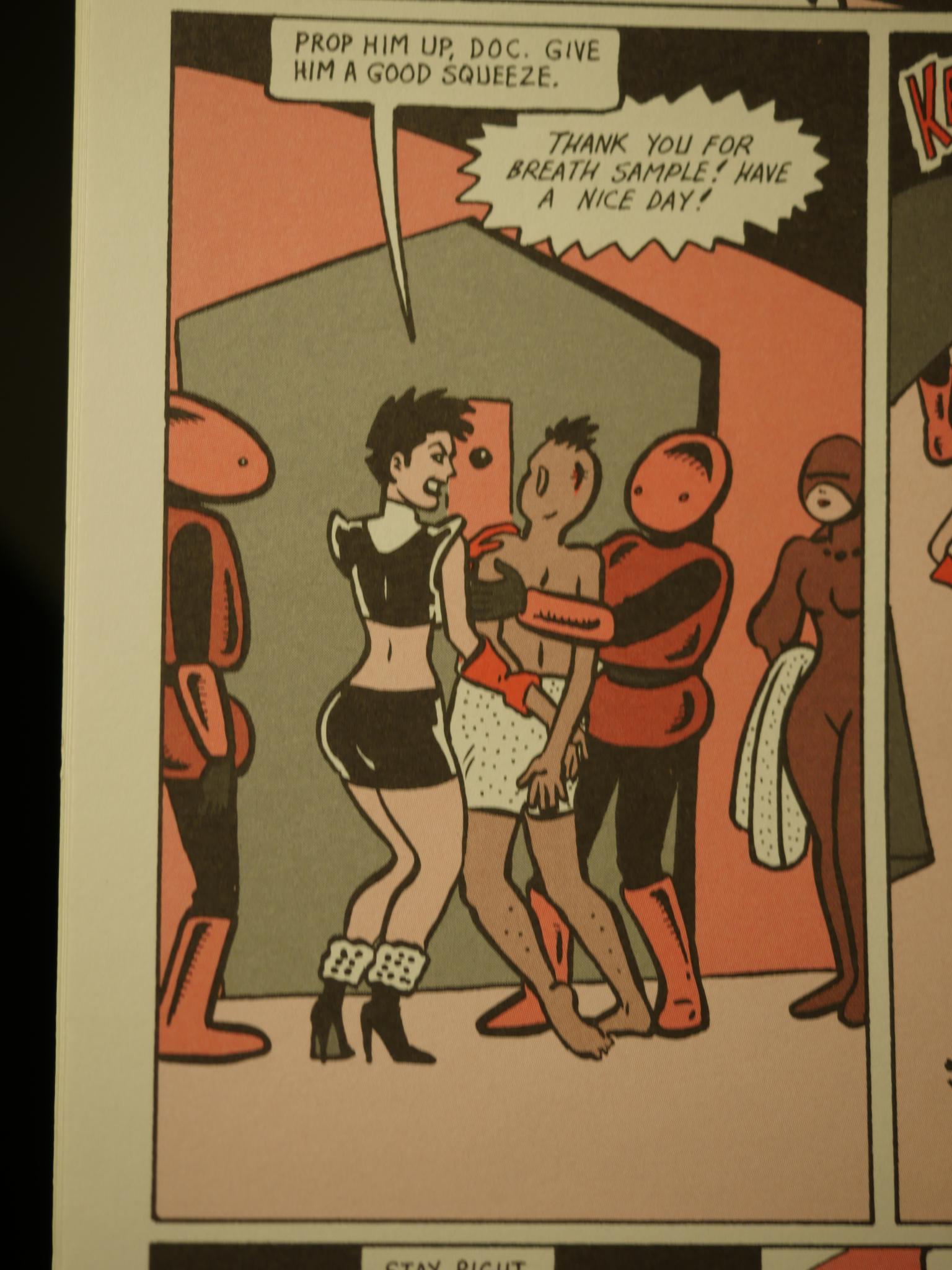 I don’t recall whether these stories were in black-and-white or in full colour originally, and I’m too lazy to root them out from that cupboard over there. I wonder just what colours were used when printing it here, though: It looks like it may have been printed in black, red and brown? But is that a thing? Or are the browns really just reds with grey dots? Does red and grey result in brown? 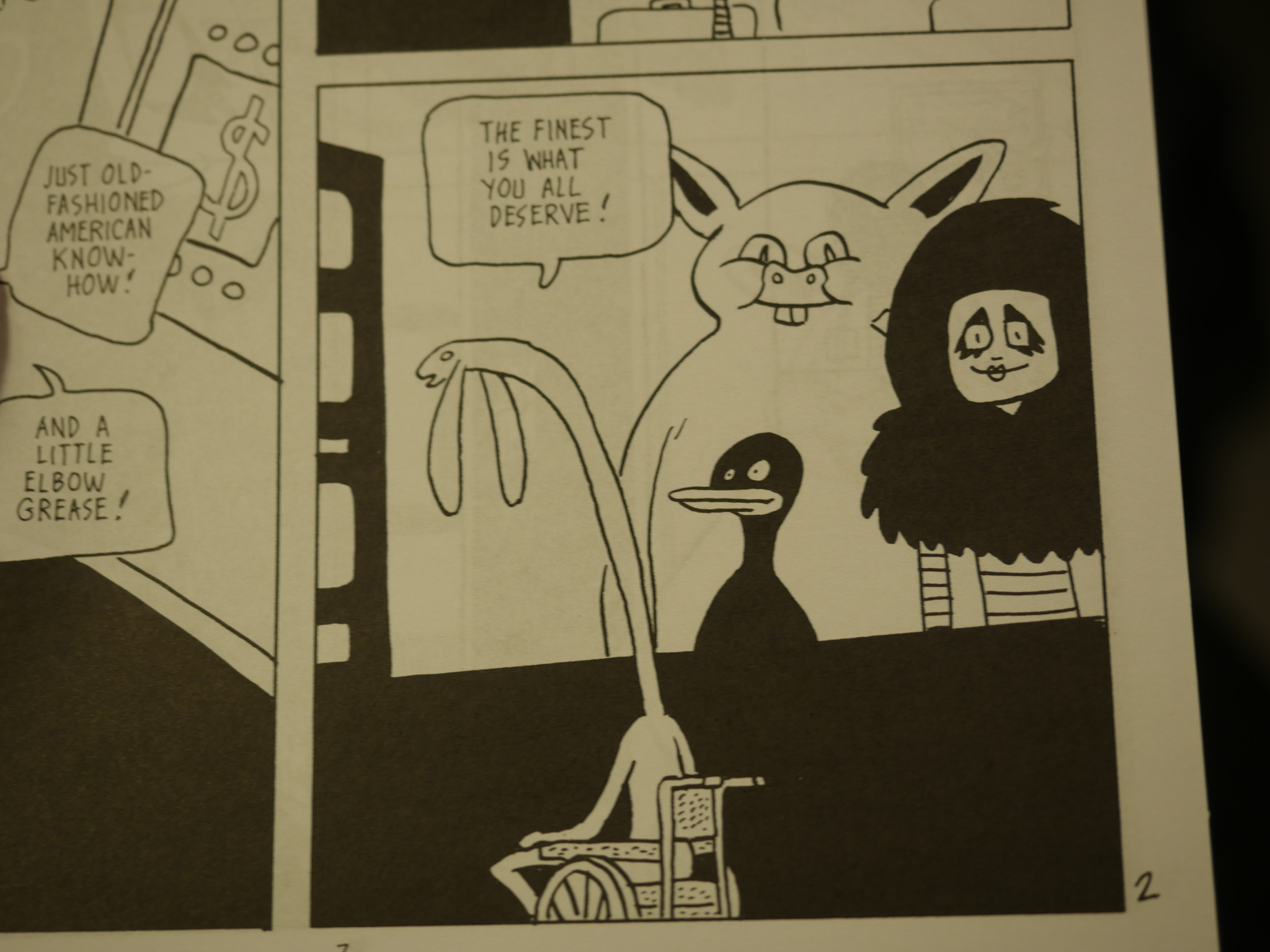 Finally, and most importantly, we have Blubber, Beto Hernandez’ new comic book comic series. It’s completely insane. It’s so off its kilter that it may never be kiltered again. It is bat-shit crazy, and it’s kinda brilliant.

There’s a lot of very large (and some very small) penises on most of the pages, and since I don’t want this blog to get extremely X-rated, I’ve not included a lot of examples. 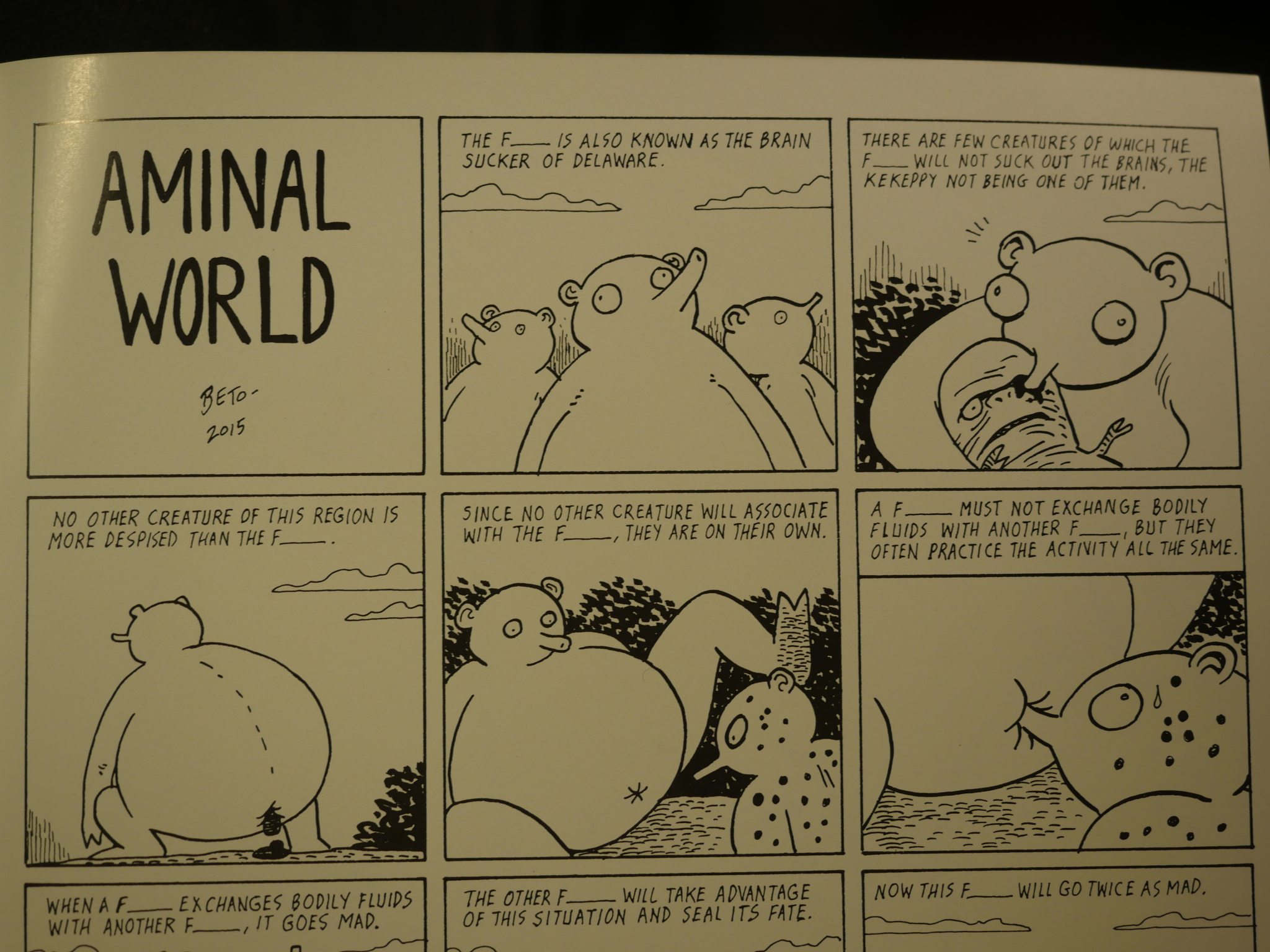 The first issue is a lot of this kind of stuff; very much like a stream-of-consciousness imaginary nature documentary. With a lot of penetration any which way, here for once without a penis in sight.

But haven’t we seen that creature somewhere else? Wasn’t it sucking the brains out of people in a different Beto storyline a few years back? Hm… 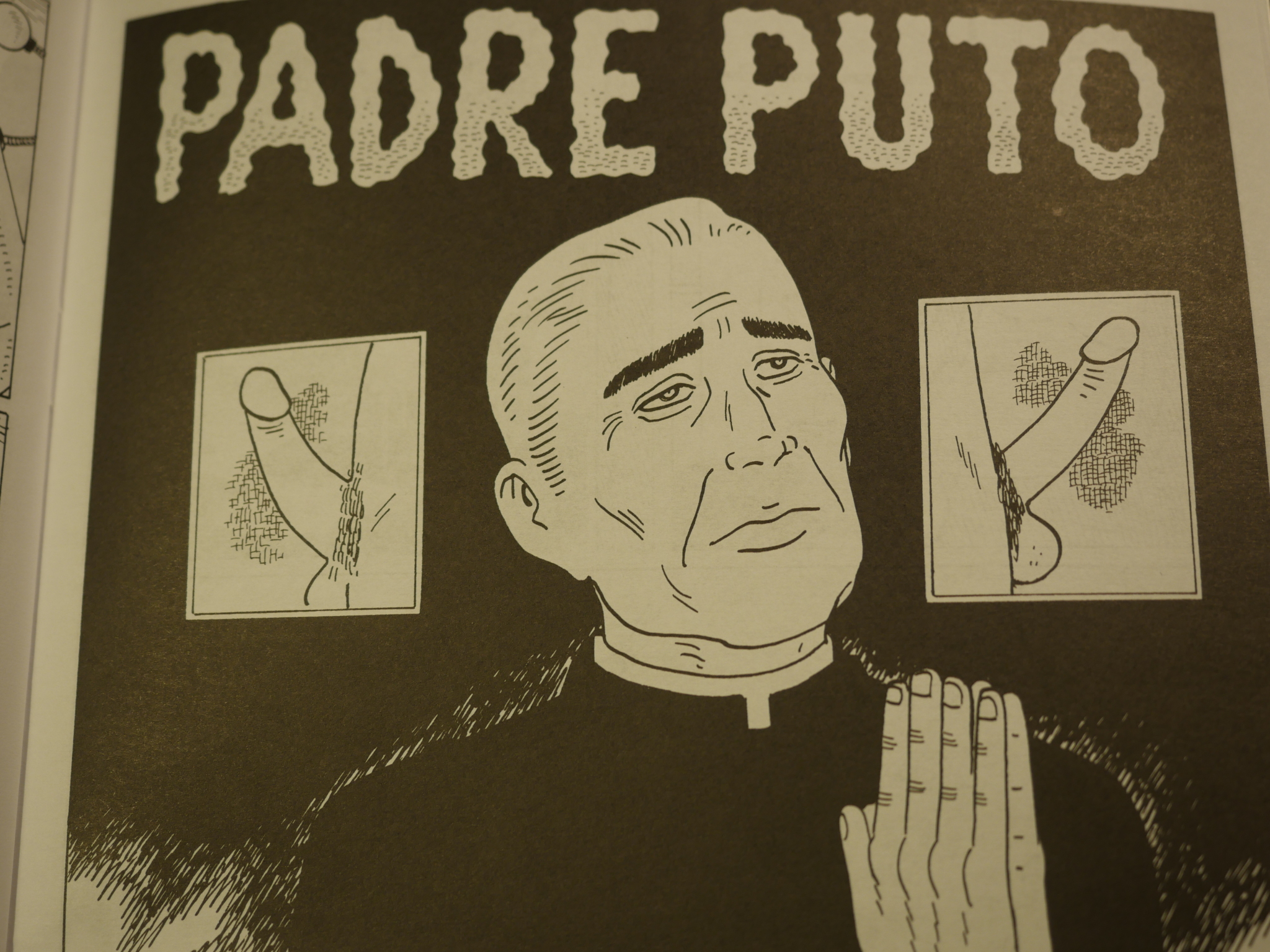 The second issue has more humans, but they behave pretty much like the creatures in the first issue does. 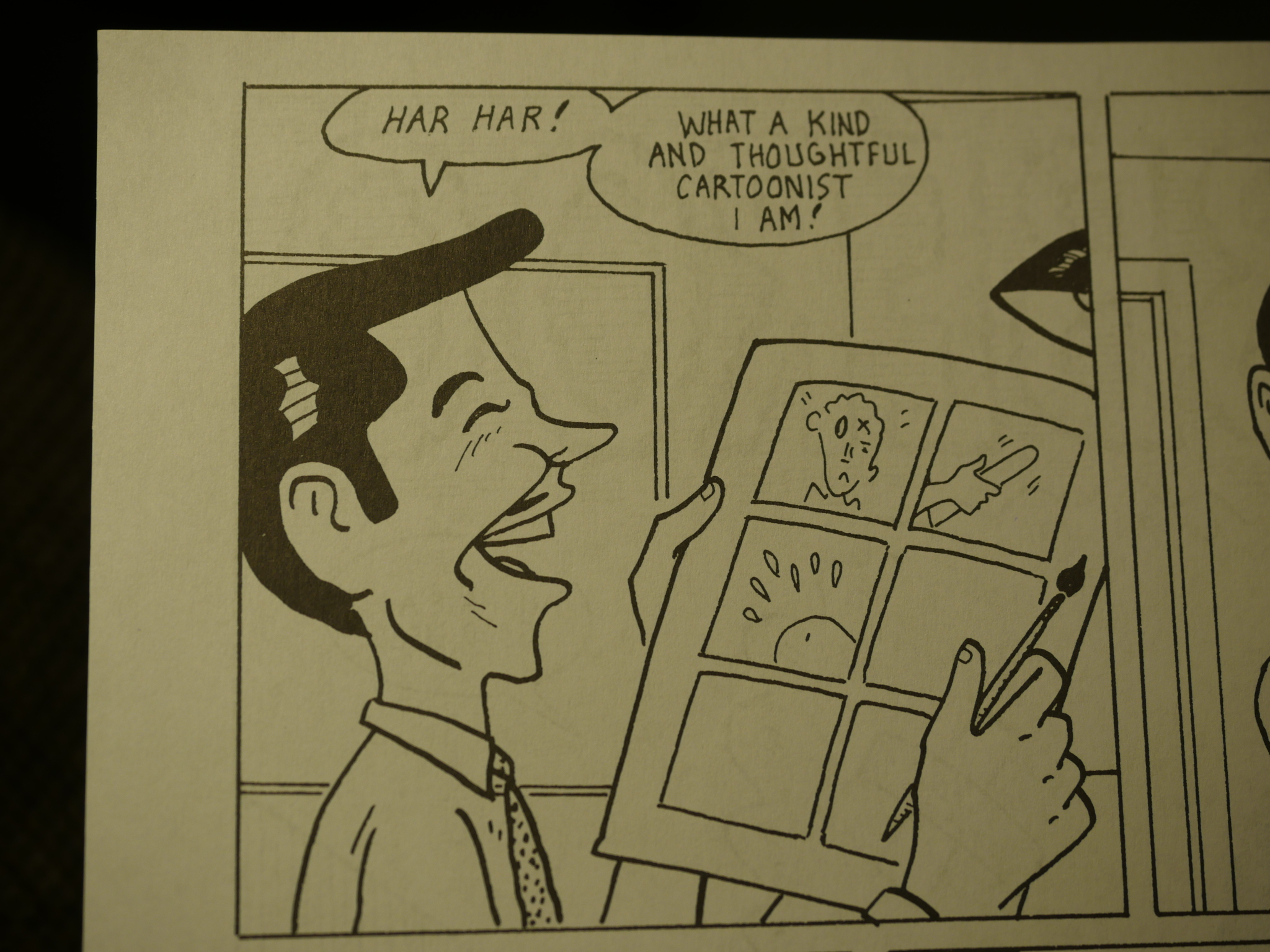 In an interview he explains the impulse for doing Blubber: “I just didn’t see a lot of comic books like that around”. And I think that’s true. There’s a lot of body horror going around in comics now (and some of it pretty gross), but this mixture of dementia and humour is pretty rare these days.

Blubber was apparently originally planned as a one-off, but there’s three issues so far, so let’s hope he keeps it up. So to speak.